Around this time last year we were in the middle of building our house, living with Mom, had majority of our stuff in storage, and Zach started having major back issues. It was a rough time! All the holidays kinda got looked over, from Halloween and on. We got Kye a costume (pirate!) but just didn’t make that big of a deal out of everything. This year I pulled out all the Halloween decorations and Kye and I decorated the house! I also wanted him to have a super fun costume. Since he’s not into dressing up and he’s at a very active age I wanted to go with something that would be comfortable. I’m all about letting the kid pick out his own costume…however have you seen boy options? 99% of them are super heroes. My son has NEVER seen any of the super heroes so he doesn’t even know who they are!!!

Since Kye is SO into “roaring” all the time like a lion I thought a lion costume would be cute and that he’d enjoy getting to act like a lion! I planned to buy a hat from Etsy that looked like a lion’s mane and just have him wear a sweat suit outfit and somehow make a tail. When I started hunting for the hat they ran around $20. A bit high for what I was wanting. So I started hunting Pinterest and found this adorable lion costume from an Etsy shop called Do it Yourself Costumes.

I was able to buy all the pieces for the lion costume for under the price of the lion hat and I liked the look of something home made. The hardest thing was finding the dang brown sweatsuit outfit!!! Thankfully I ended up finding one at Target that worked (and I was able to buy a larger size top…to fit over that big head..and smaller sized pants so that worked out perfect). It still took me 3 hours to sew the whole thing (by hand, thank you) so I think it’s fair to say I made his costume right?!?!?

When I was working on it Zach was outside (yes, working on the storage shed…) and when he came in I jumped on him before he could open his mouth! A LOT of the time I’ll do something/buy something/make something and Zach will cut it down. He’s kidding (typically) but it will really hurt my feelings sometimes. And this was one of those times where if he even joked about it looking gay I’d lose it. So I warned him, and he did well responding with only positive comments 😉 Who knows if he really liked it or not but I appreciate him at least acting like he did!!! 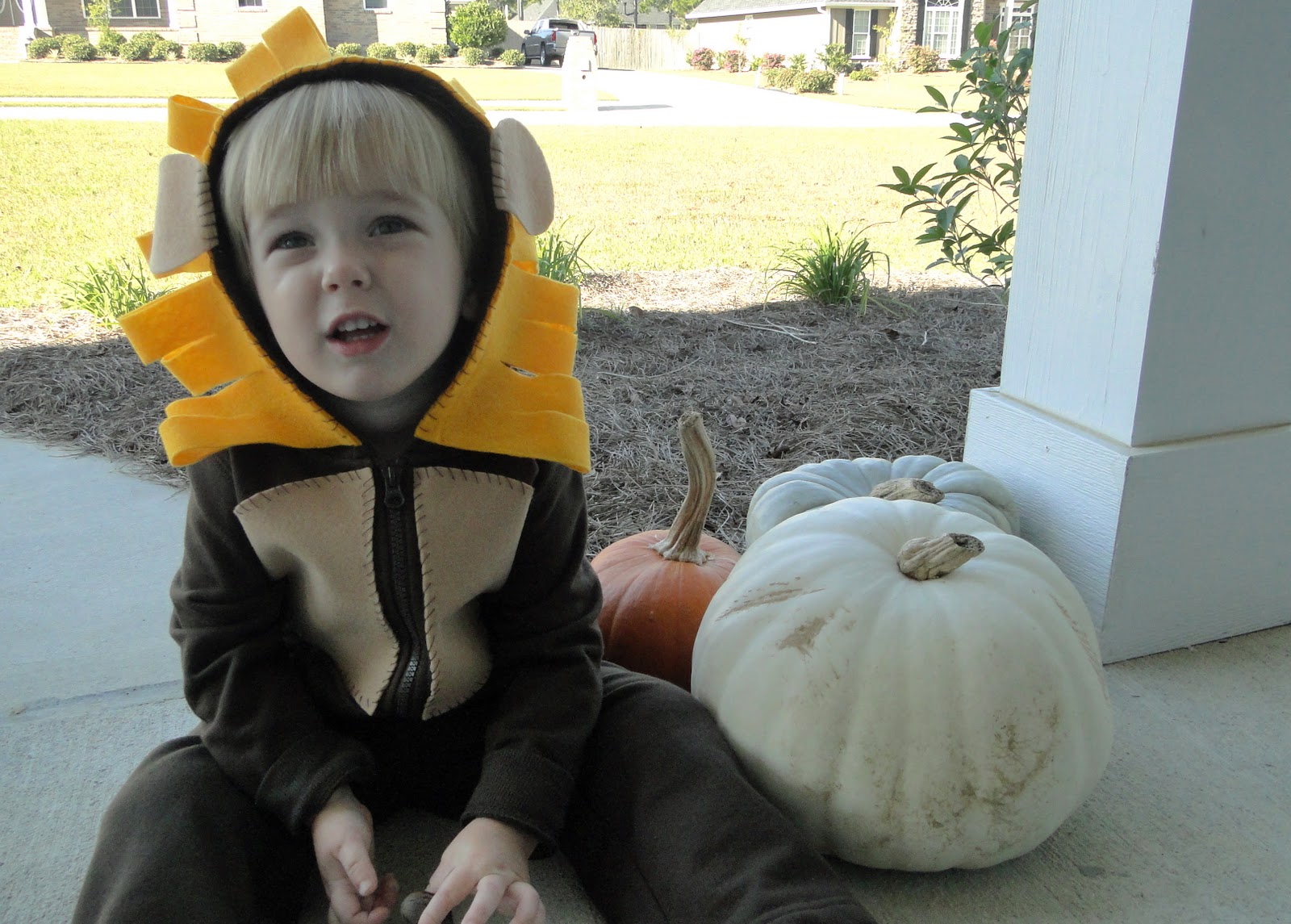 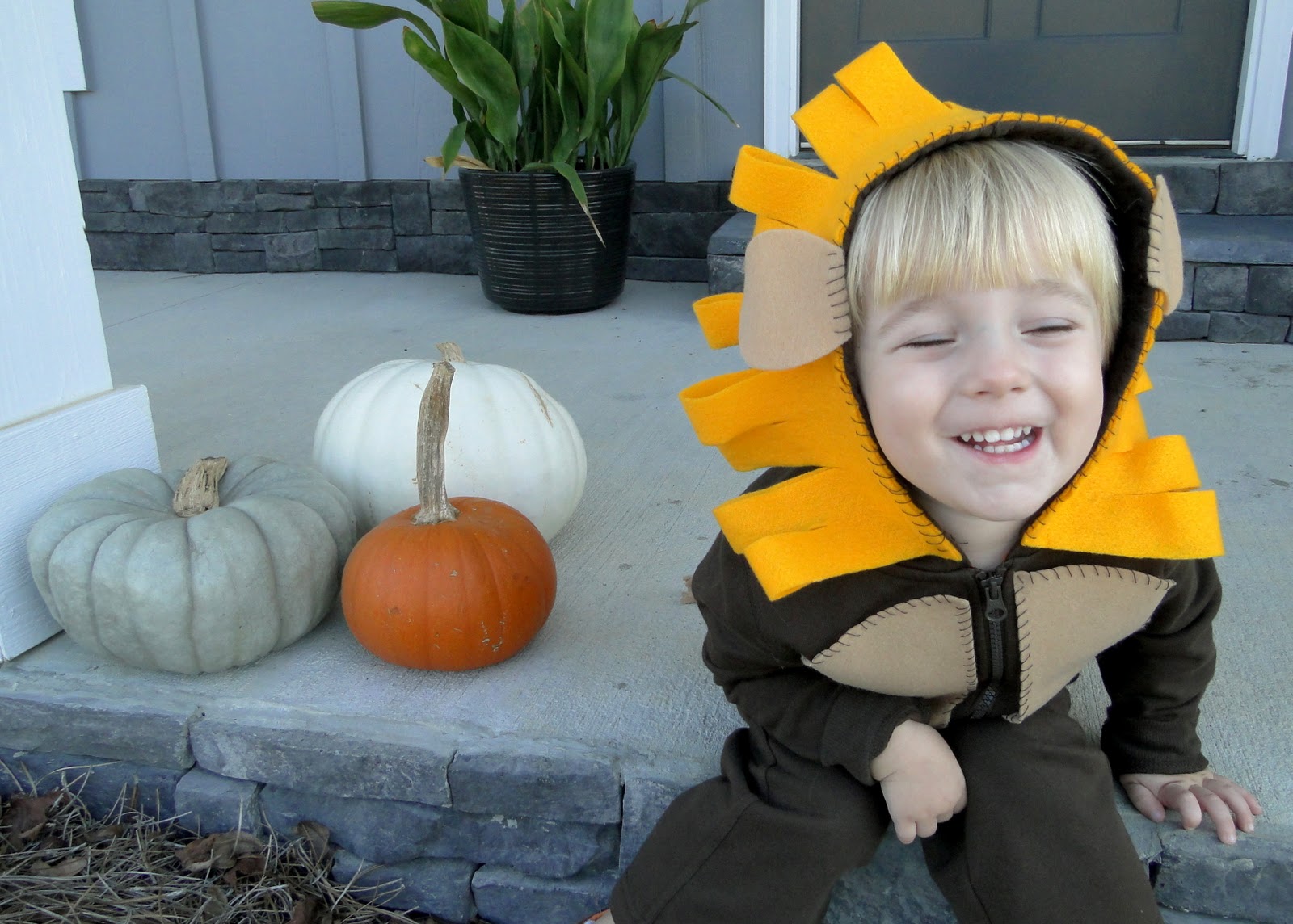 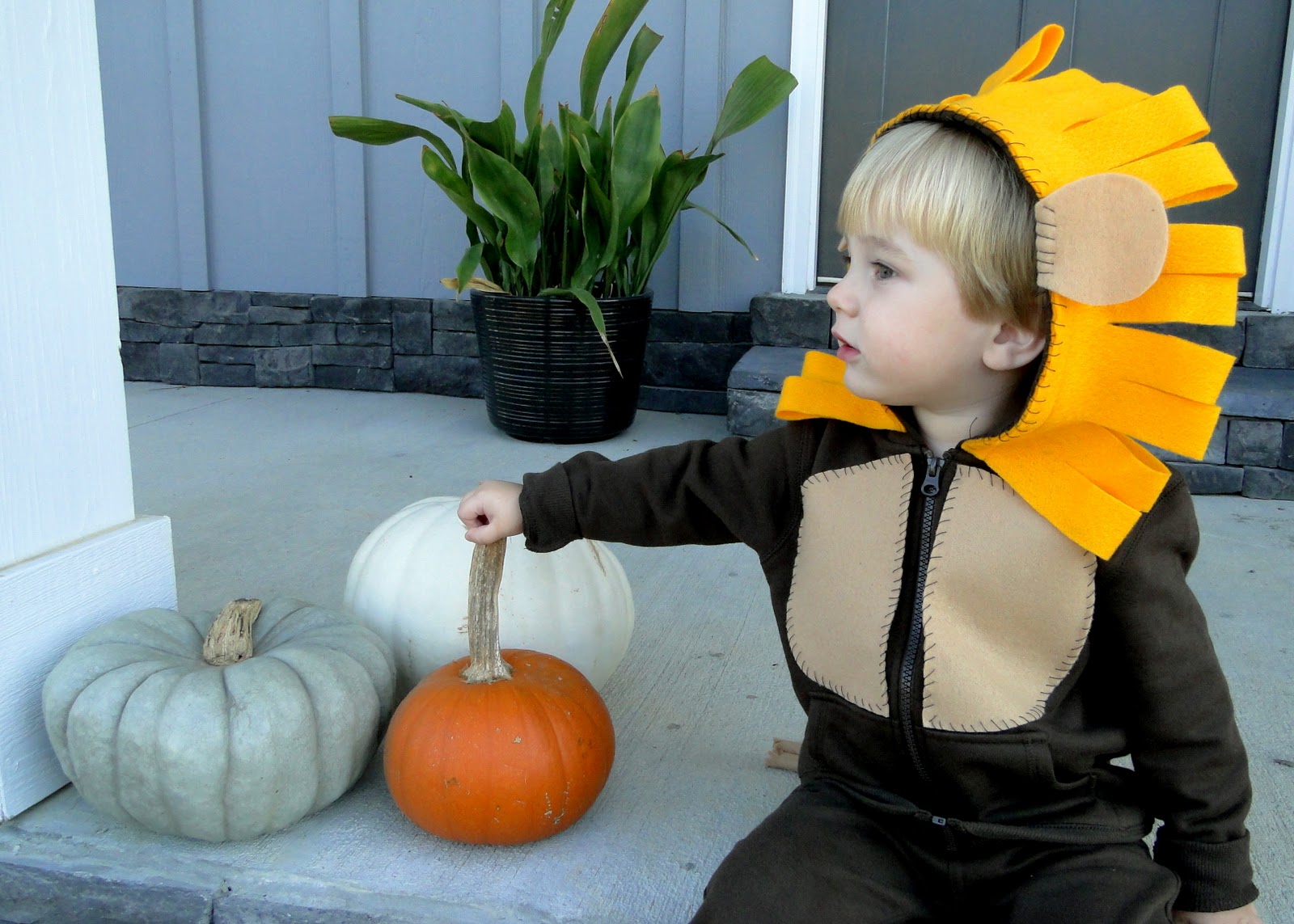 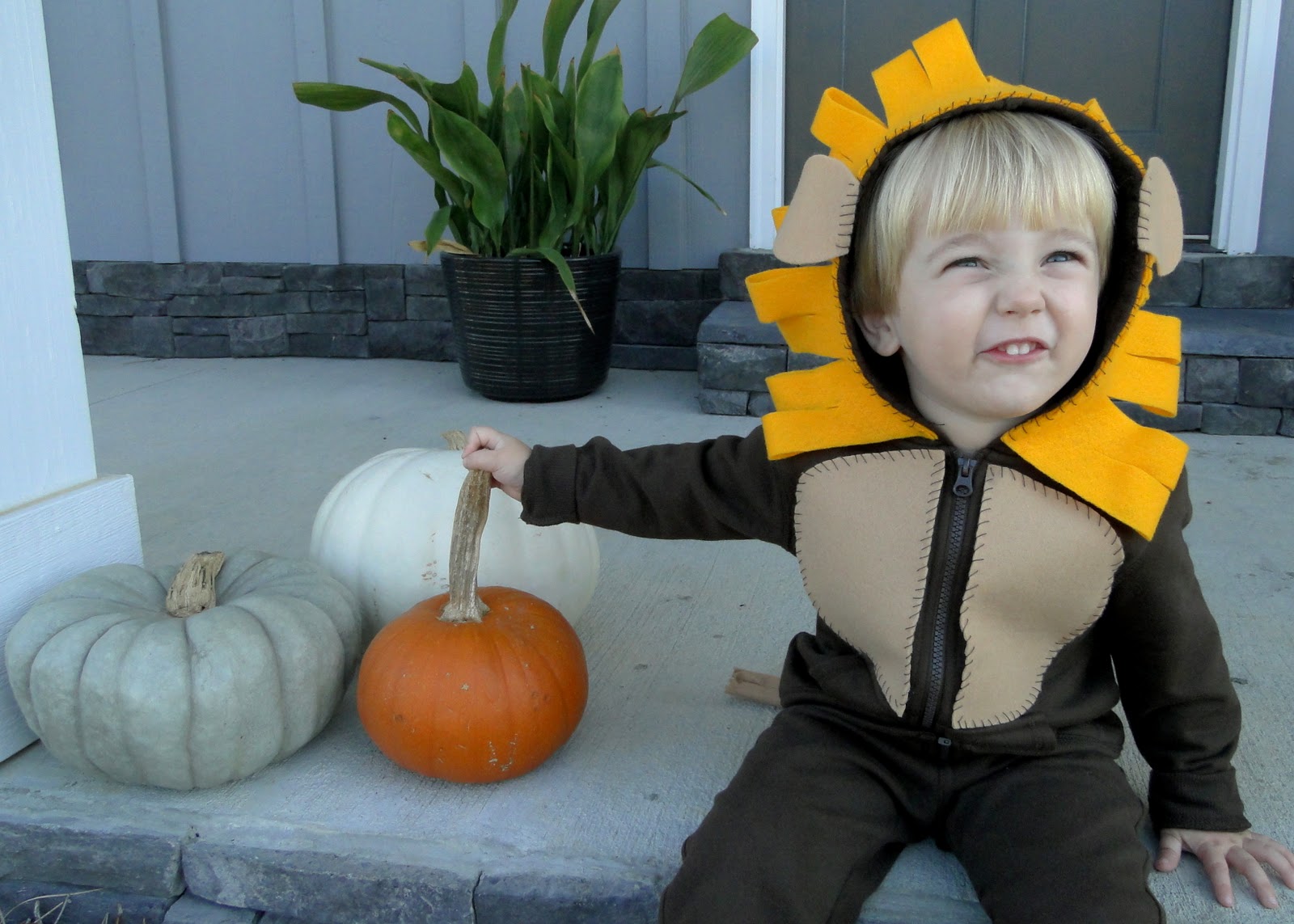 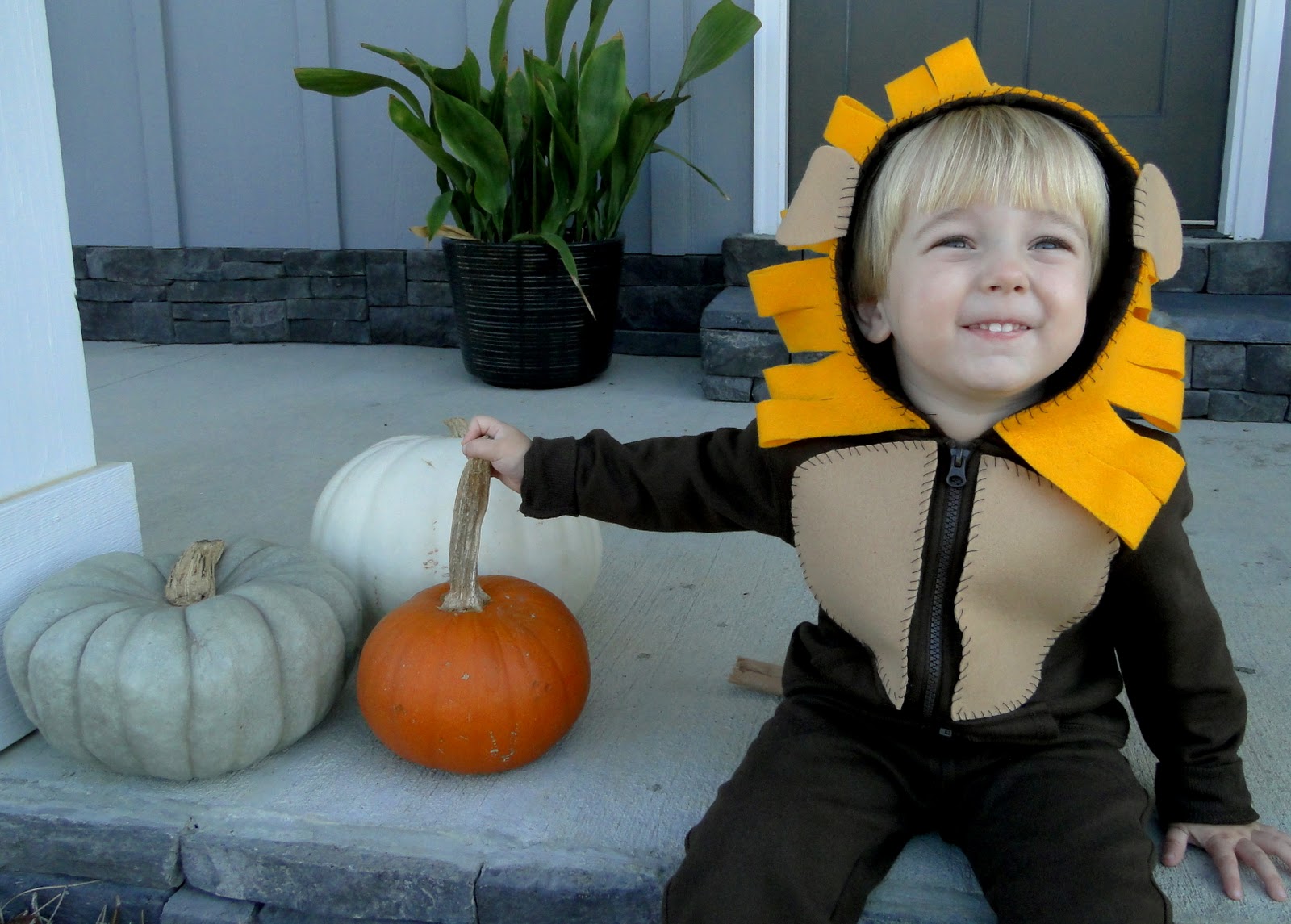 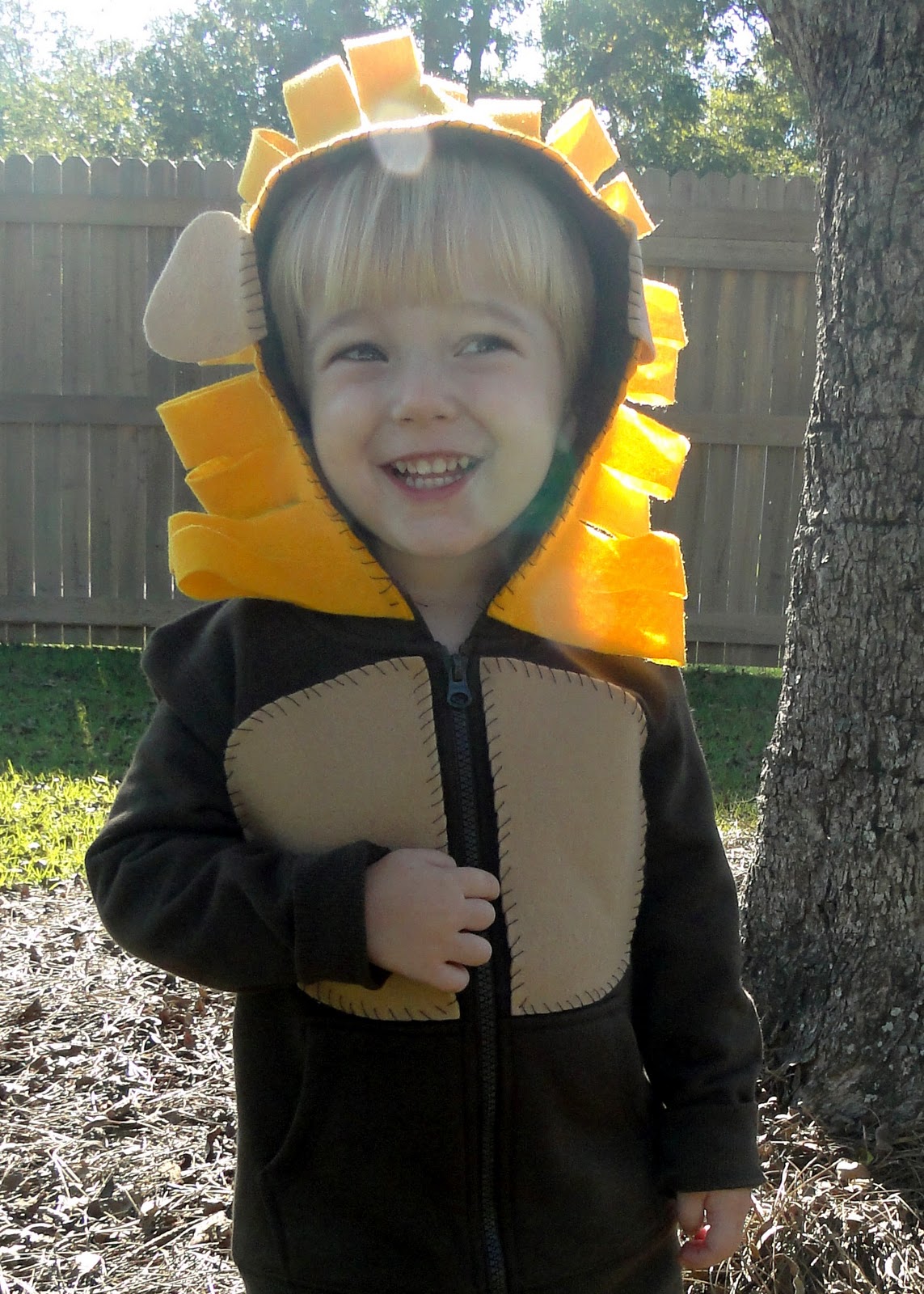 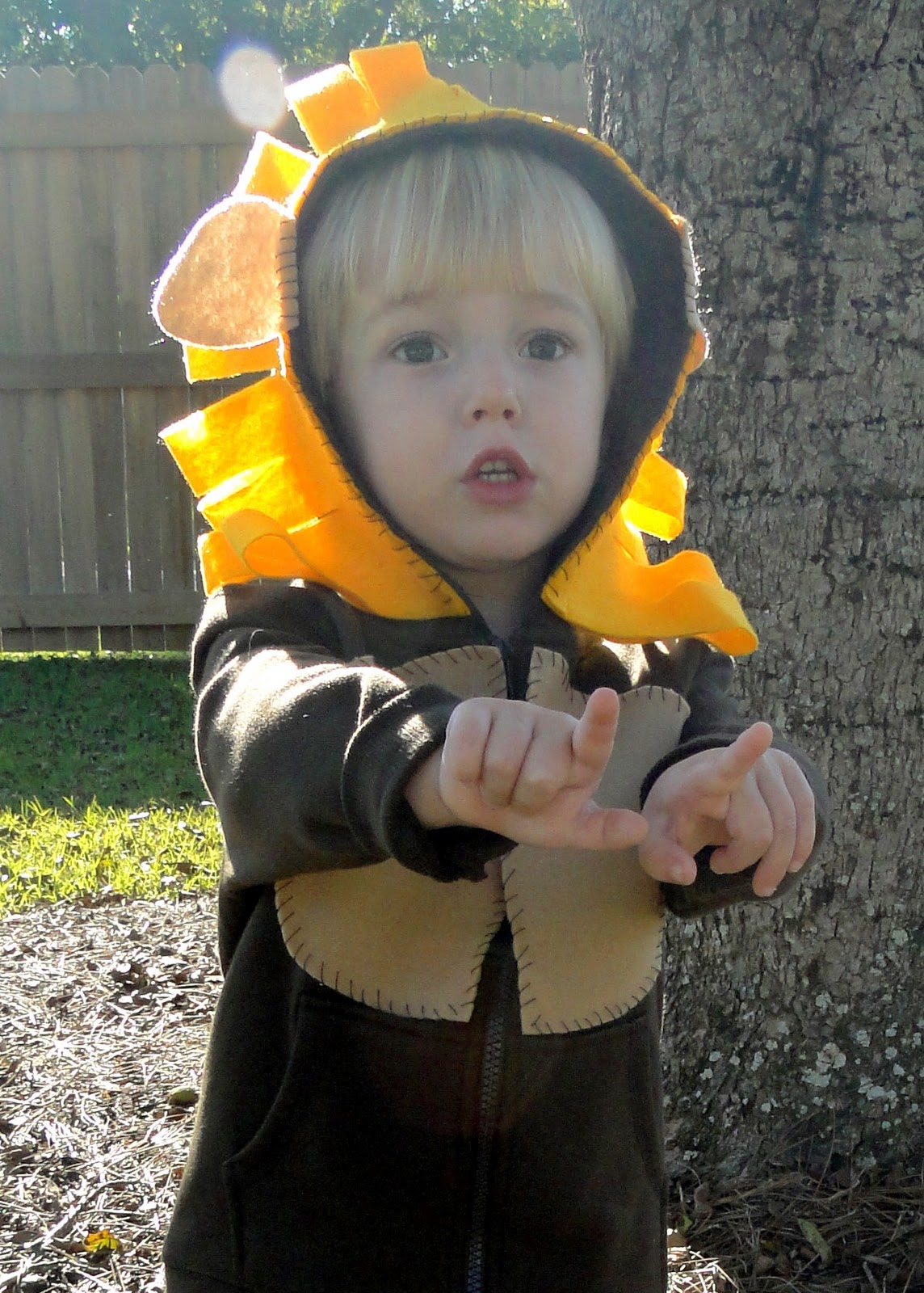 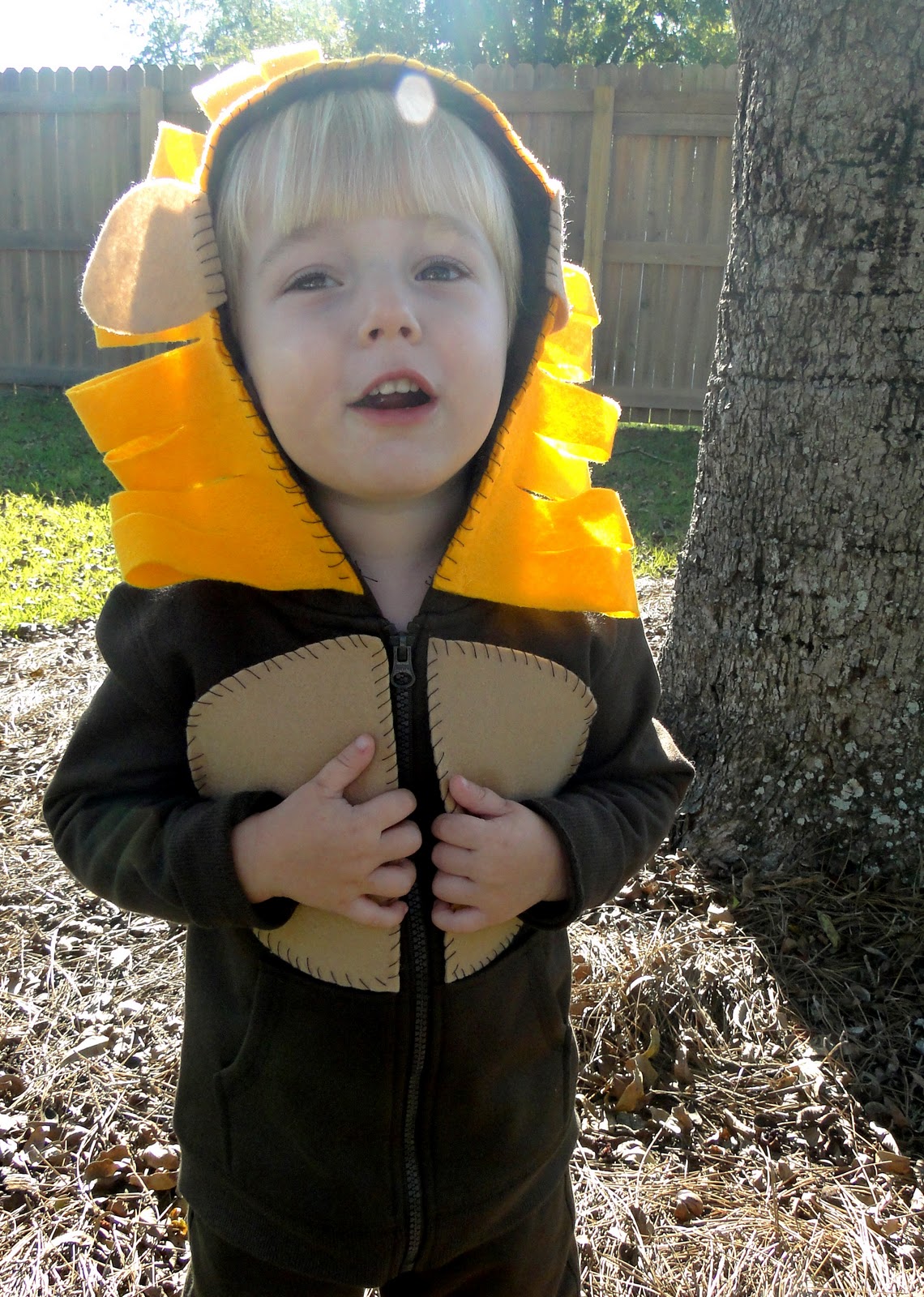 showing off the tail 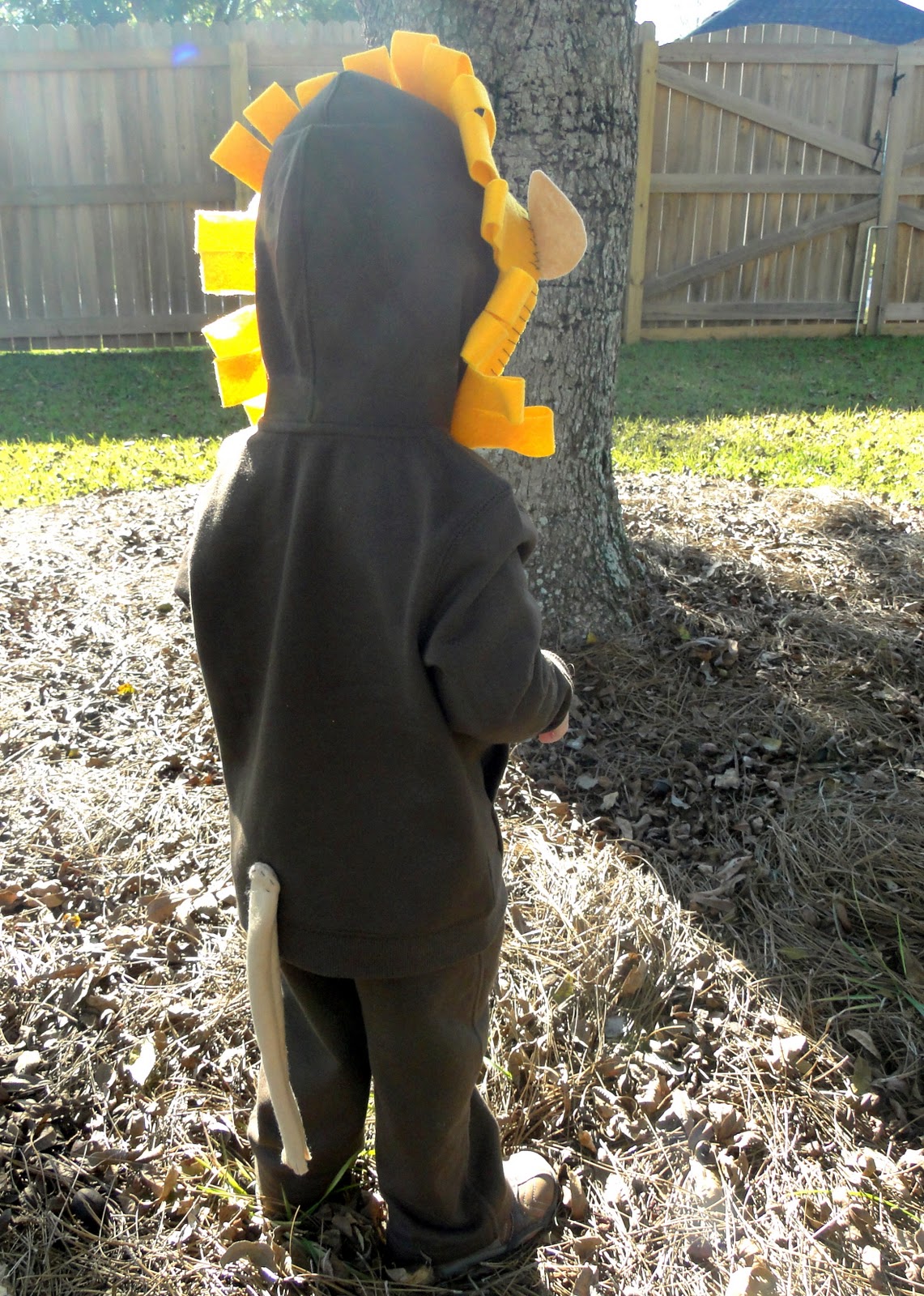 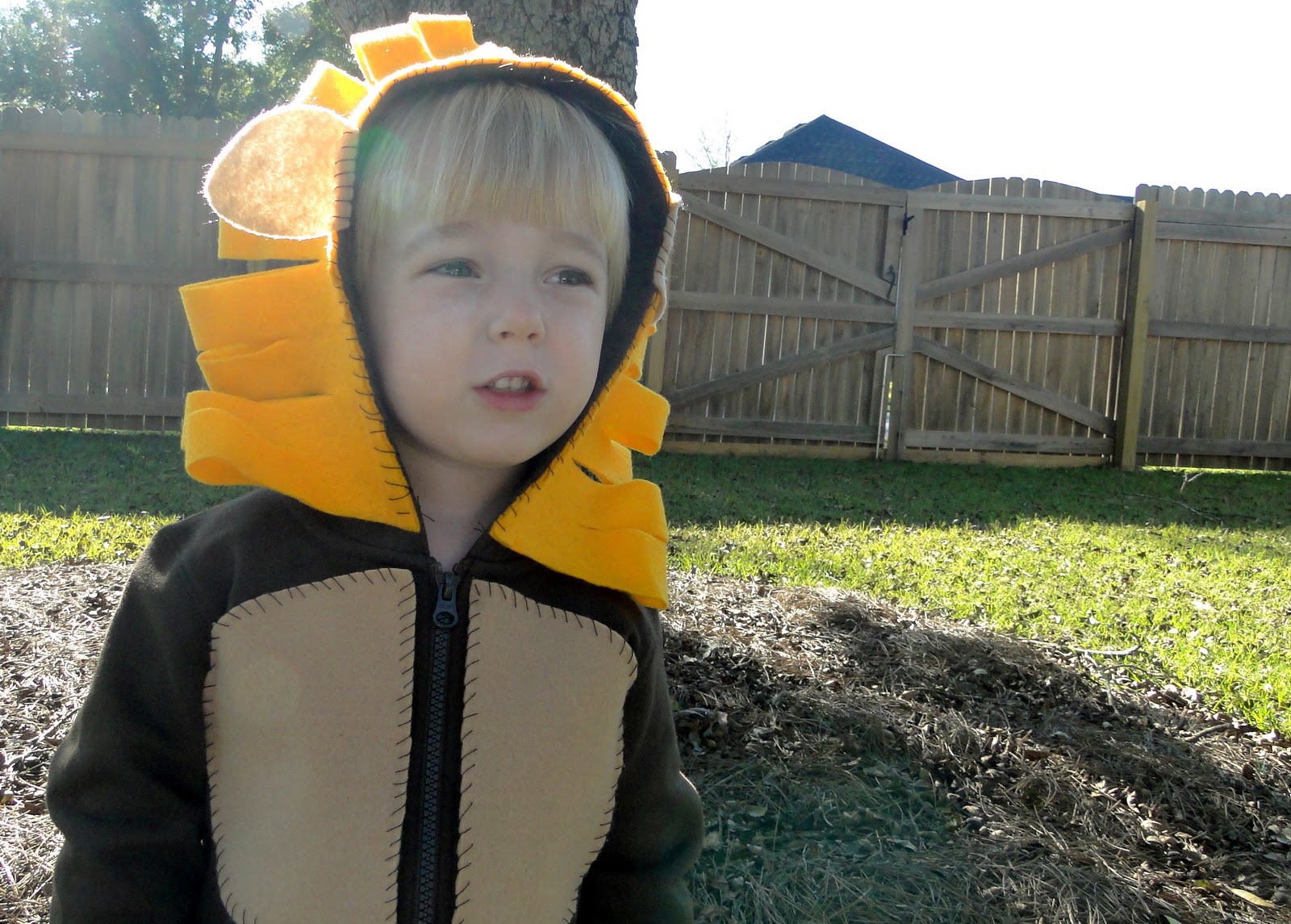 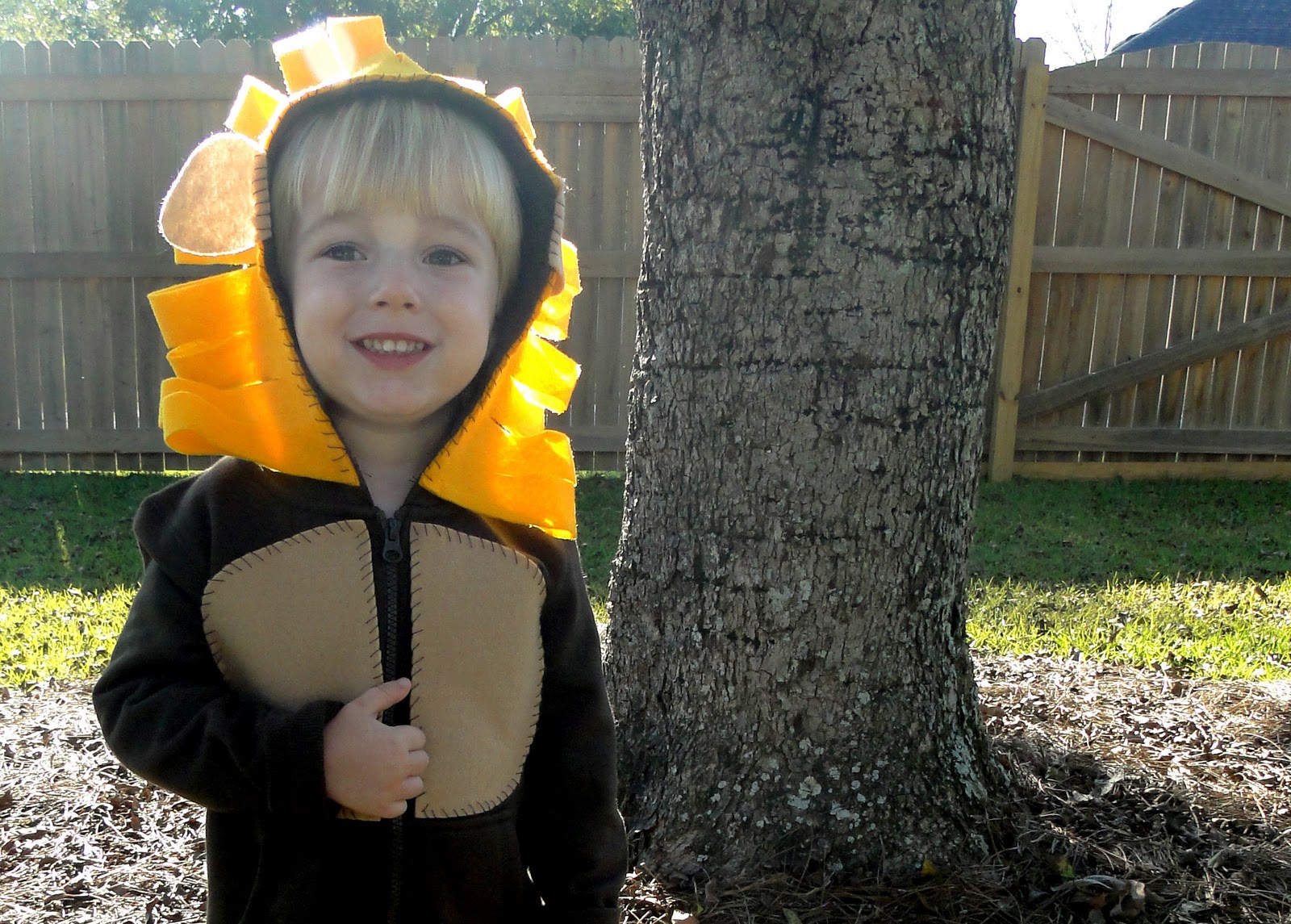 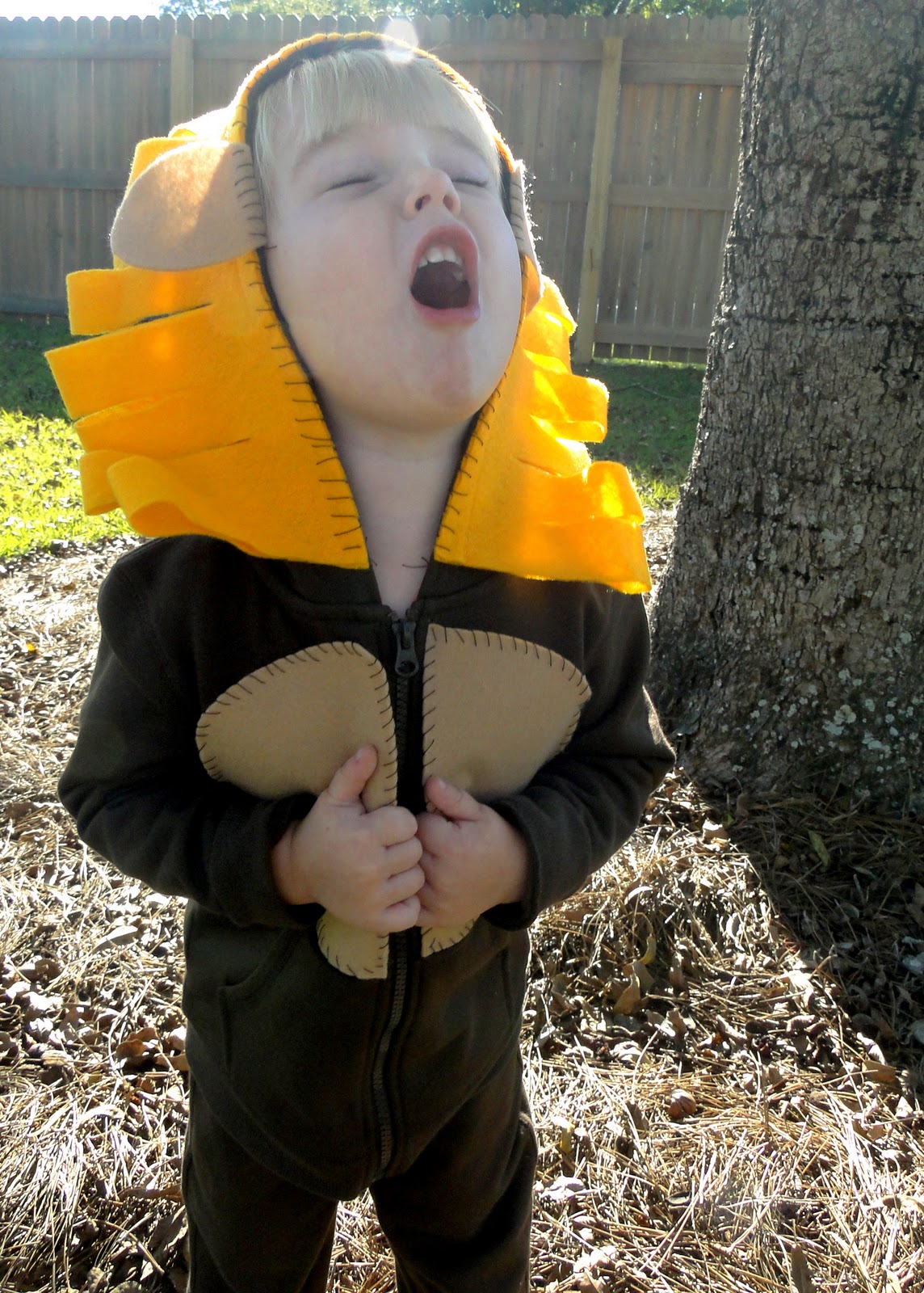 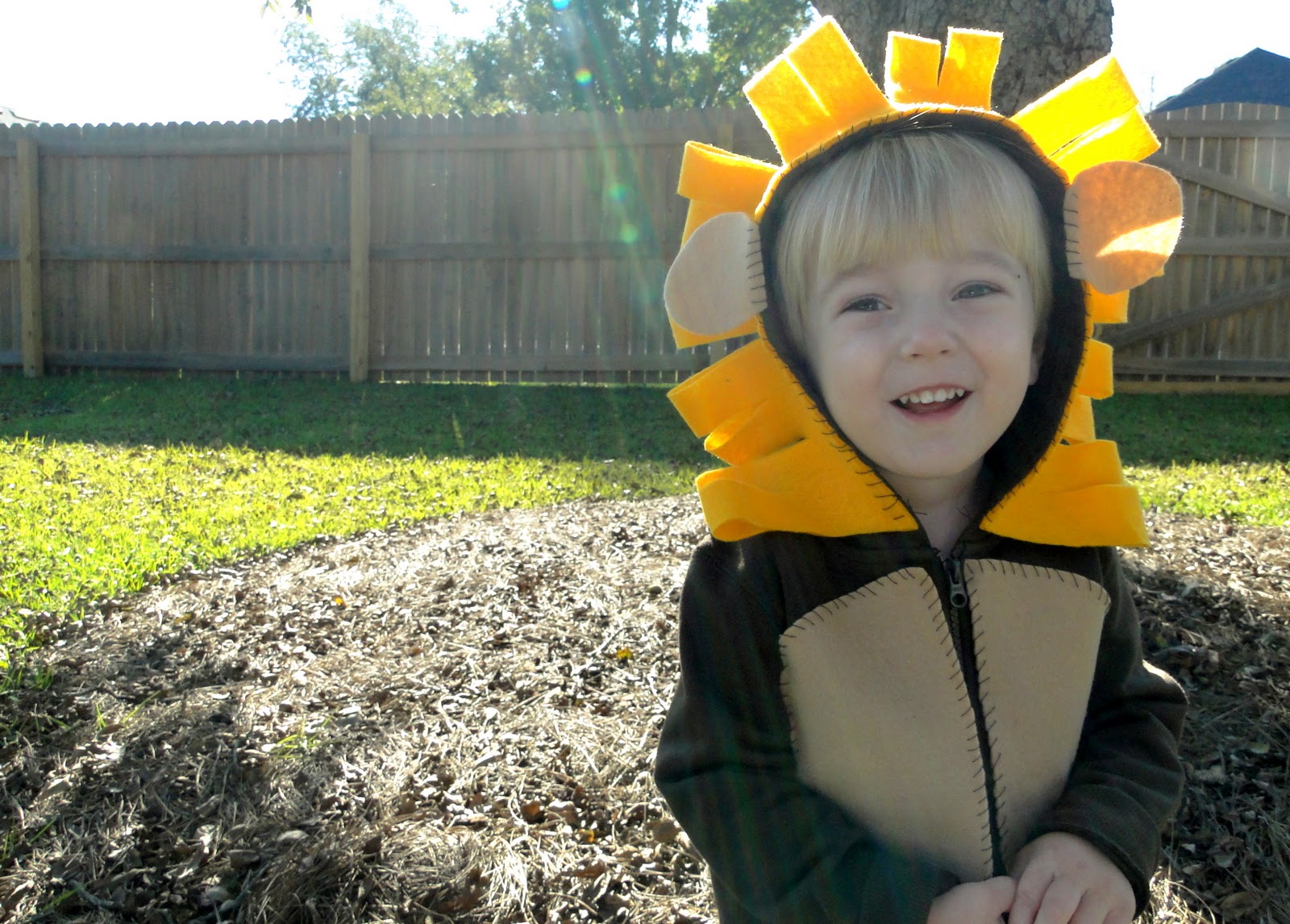 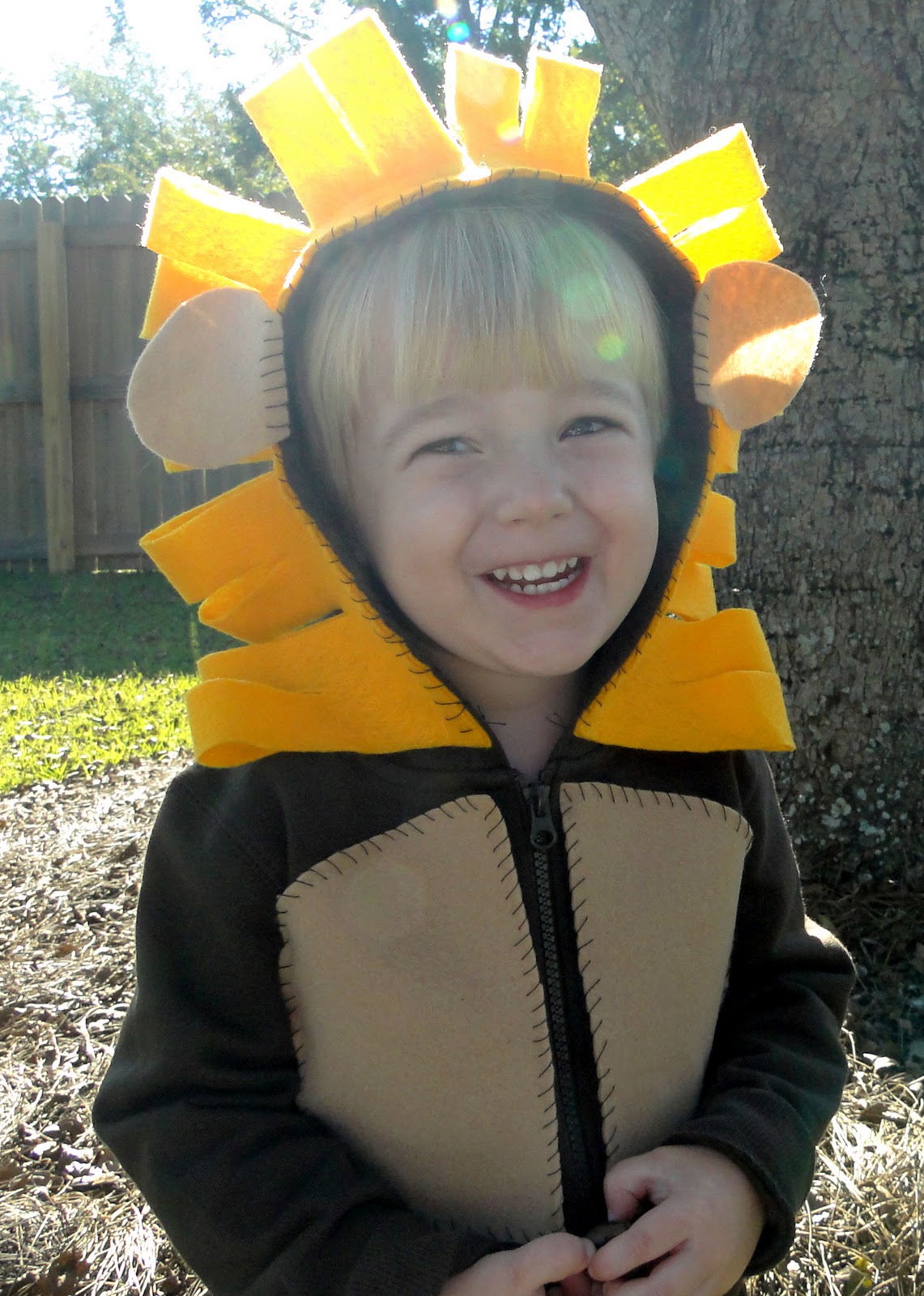 Didn’t it turn out adorable?!?! 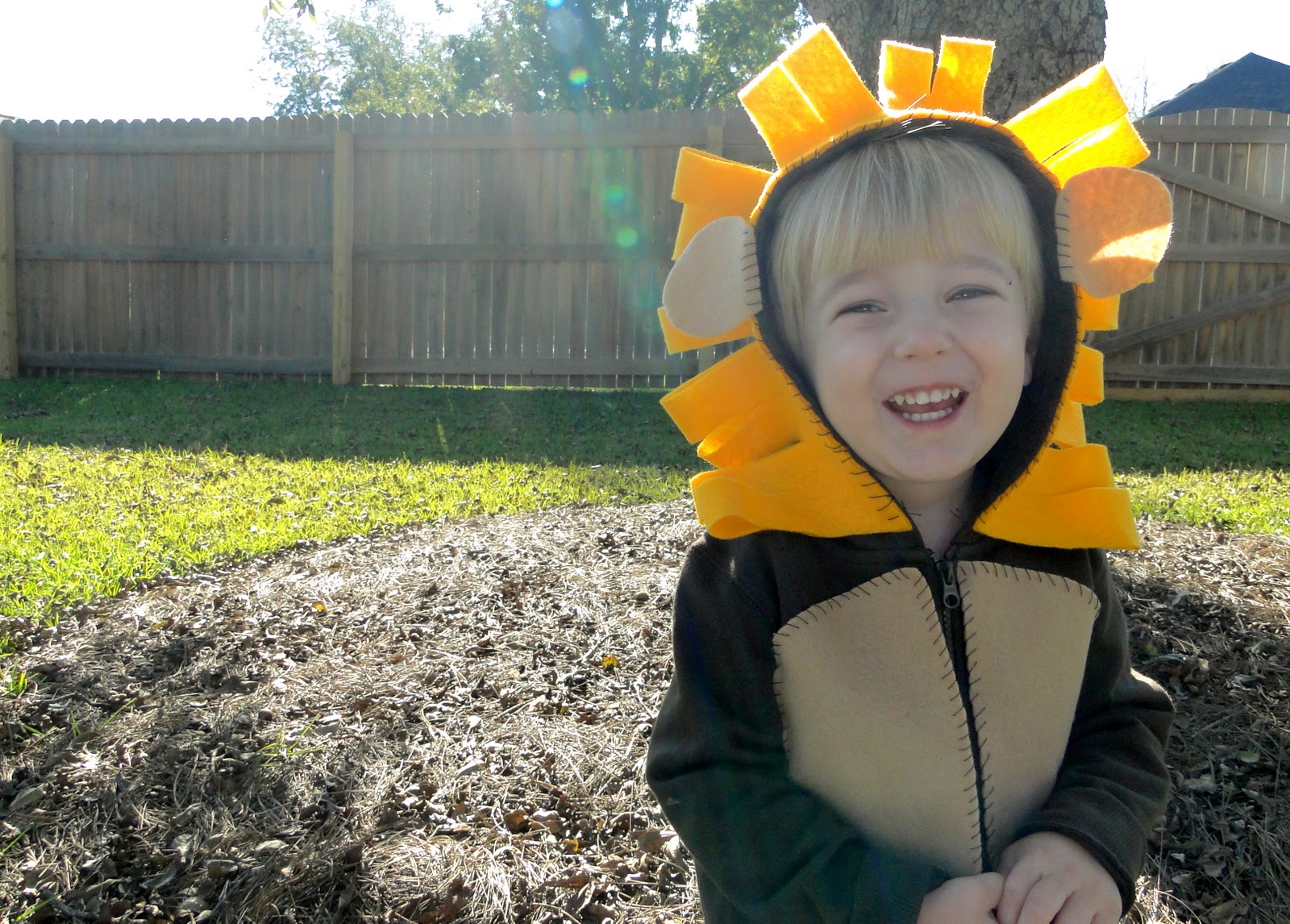 Even though I didn’t make it from scratch, I’m still proud of myself for how cute it turned out and how much Kye really did end up loving it!!! I’m also glad we can use the pants (the tail is sewn on the jacket) for play clothes now and he can play with the jacket if he ever wants to. I think by next year he may be old enough to have more of a say in what he dresses up as so I don’t know if I’ll be “making” his costume again or not, of course I’d LOVE it for him and Blitzen to match or to do a family themed thing…but who knows what will happen 😉