Zach and I have known Gage for several years now as we met back in Public Relations classes in college. Zach and Gage have stayed in touch and have met up for lunch once in awhile. Well Gage has always mentioned how he has a beach condo down in Panama City Beach and that we should go sometime! Why not go for Zach’s birthday weekend?

The view from his condo…so pretty!!! 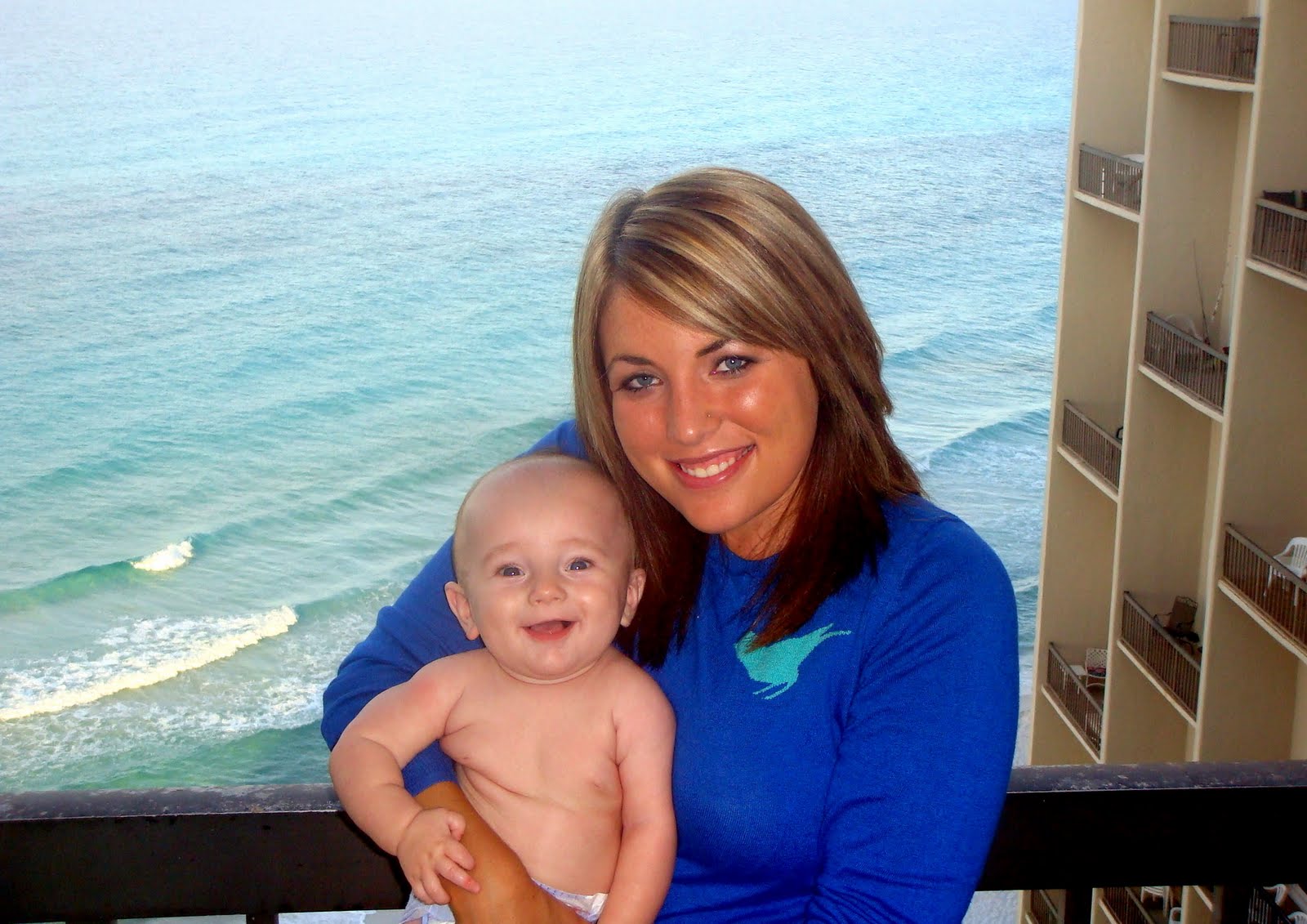 Kye LOVED the mirror wall! I even took a quick little video of it (yes, I’m taking more videos as our real video camera isn’t working so these are all I have!) 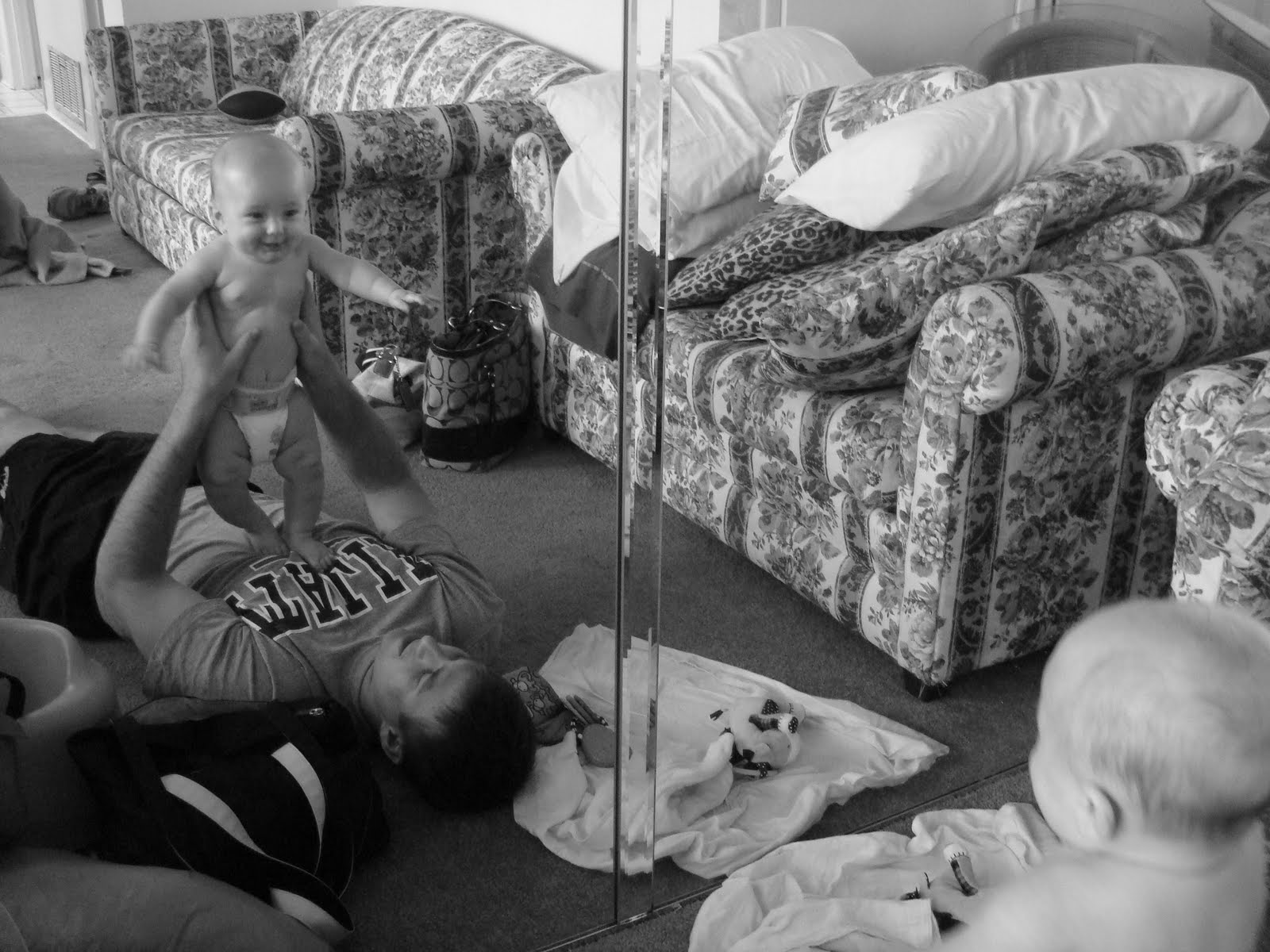 We didn’t get there until LATE Friday night…we thought we’d be able to rush down after Kye’s 3:00 feeding and make it to the condo before his 7:00 one but we were wrong and we ended up having to park in some random parking lot 20 min shy of the destination so I could nurse. Then of course Z accidentally left his Polo sunglasses I got him for our anniversary on top of the car and they went flying so we took more time looking for them on the road (and he found them in PERFECT condition just missing one lense! score!) We ended up not eating dinner until almost 10!!

Saturday was a beautiful day for the beach and here is my first time dipping into the Gulf Coast! 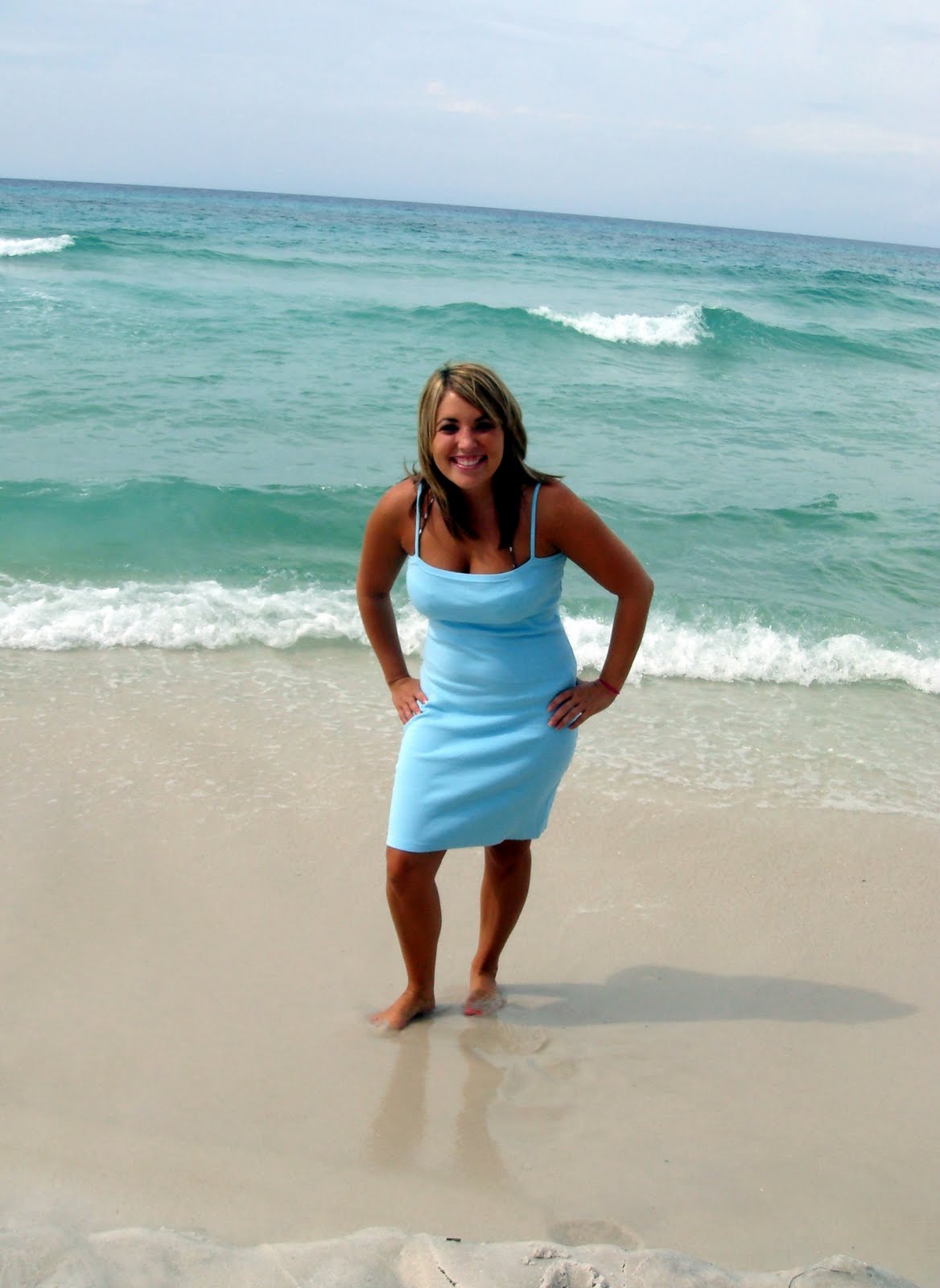 We spent the day in the water…Zach playing in the ocean, Ash and I talking, and Gage sleeping! Kye just isn’t a big fan of sand. We have a beach tent but how can you honestly prevent sand from getting into it? It’s impossible!

I’m glad Gage was okay with us bringing Ashley so I wouldn’t just have Kye for company the whole trip! 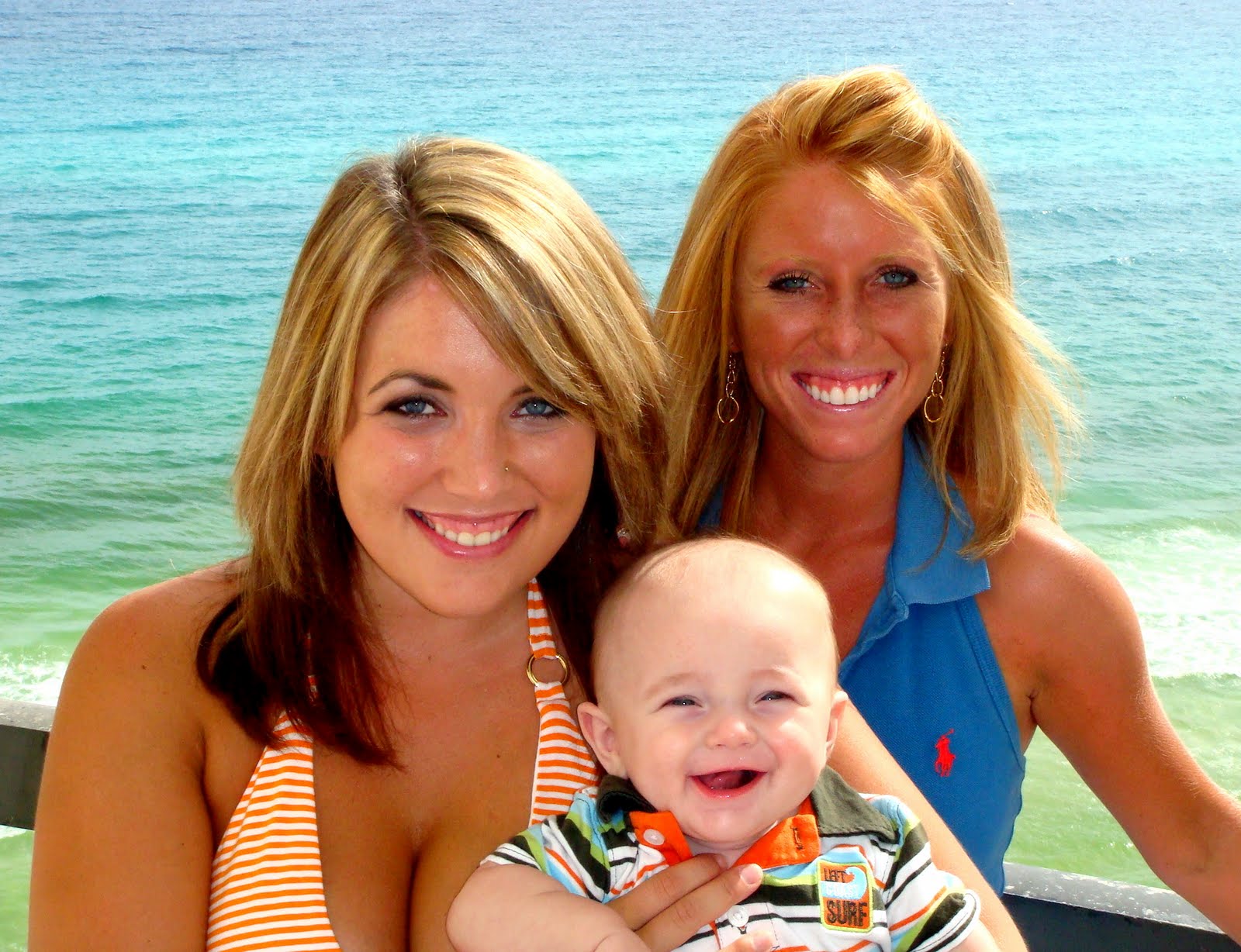 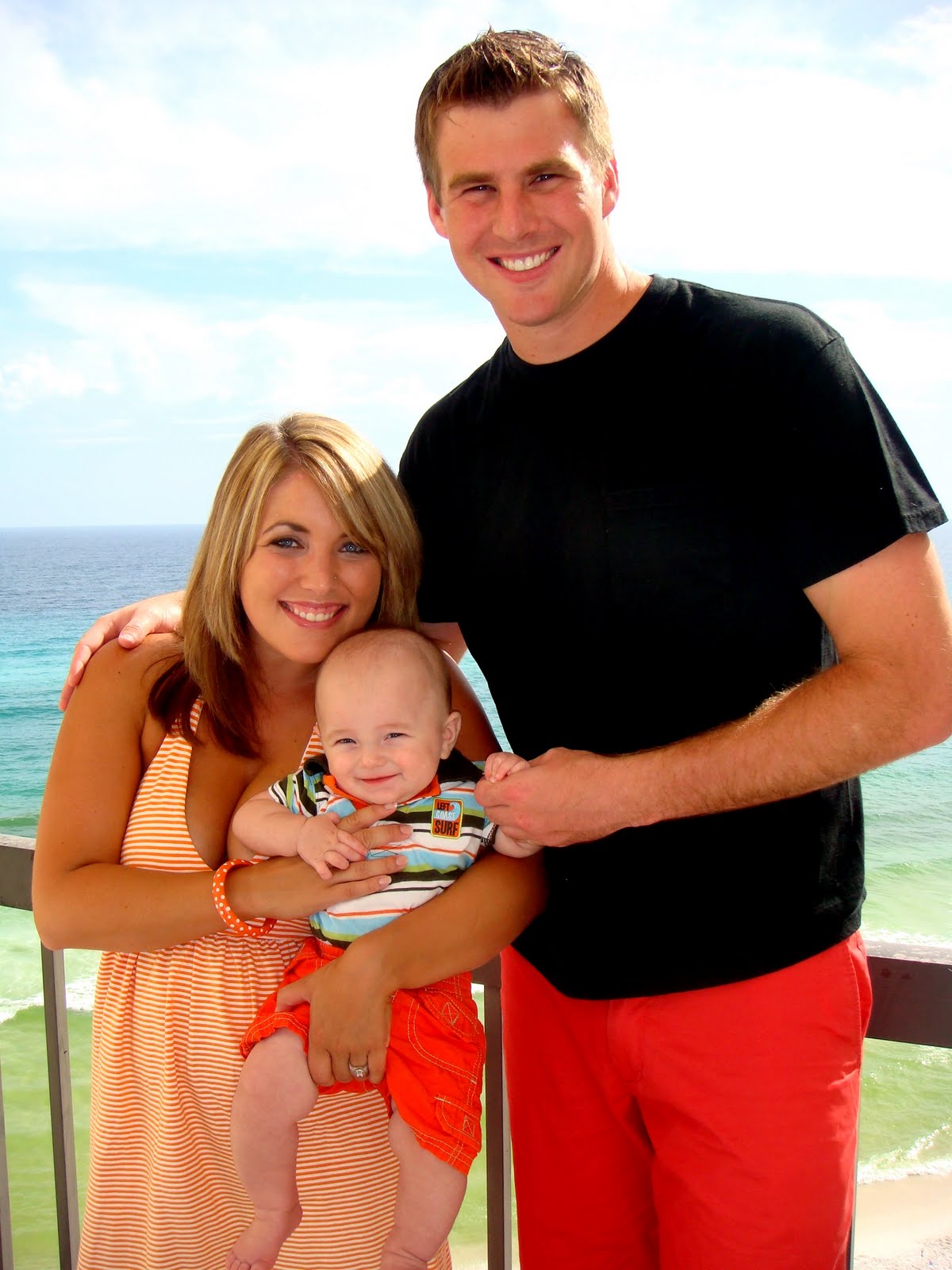 He suggested we eat at Margaritaville for dinner because they have really cool decorations that he thought Kye would enjoy. He was SO precious with Kye and so natural with him…he’ll make a good daddy some day ladies! 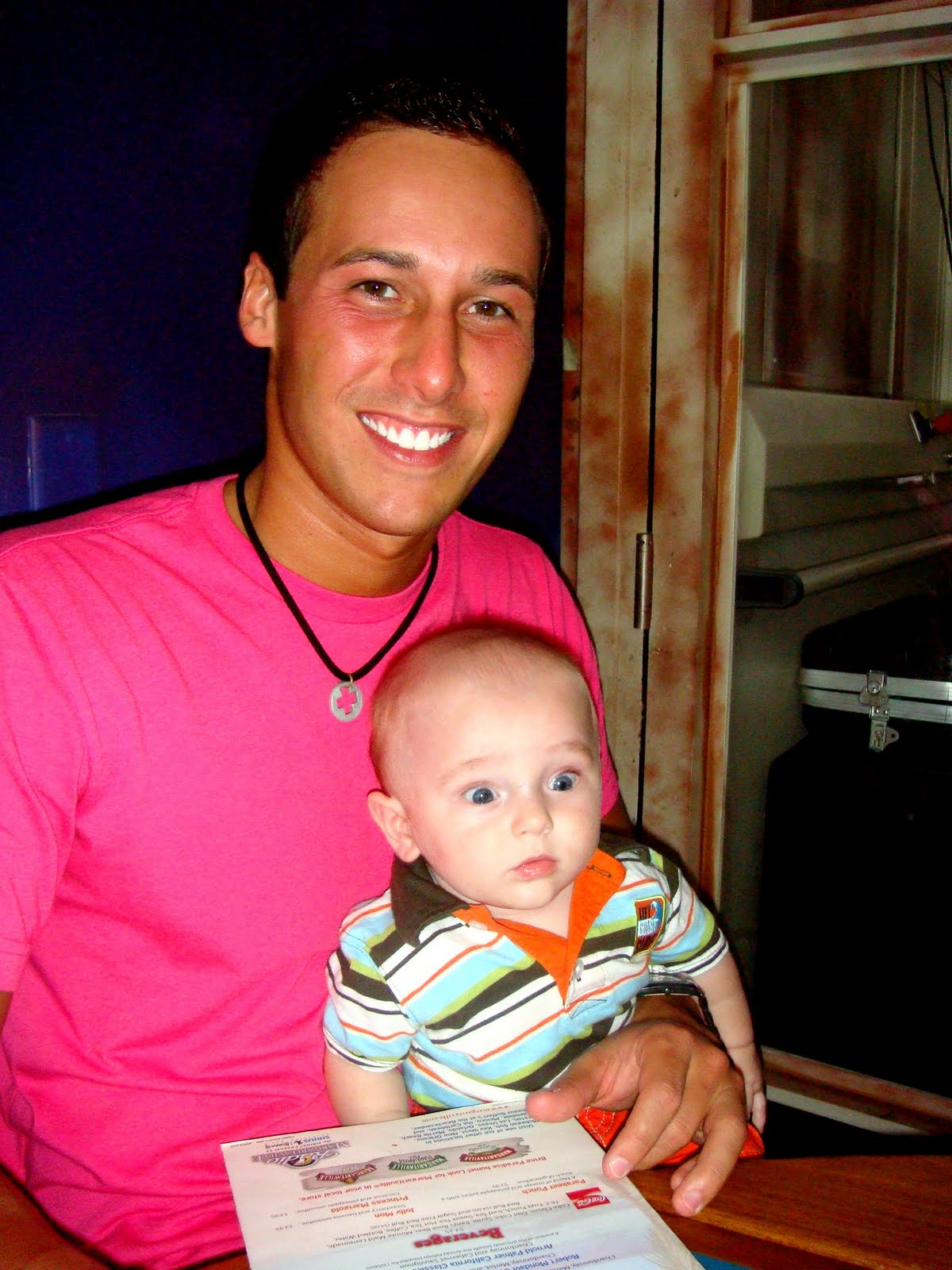 Since we got in late on Zach’s actual birthday I waited to bake his cake until Saturday. He picked out all the goodies for it and it was SO YUMMY!!! 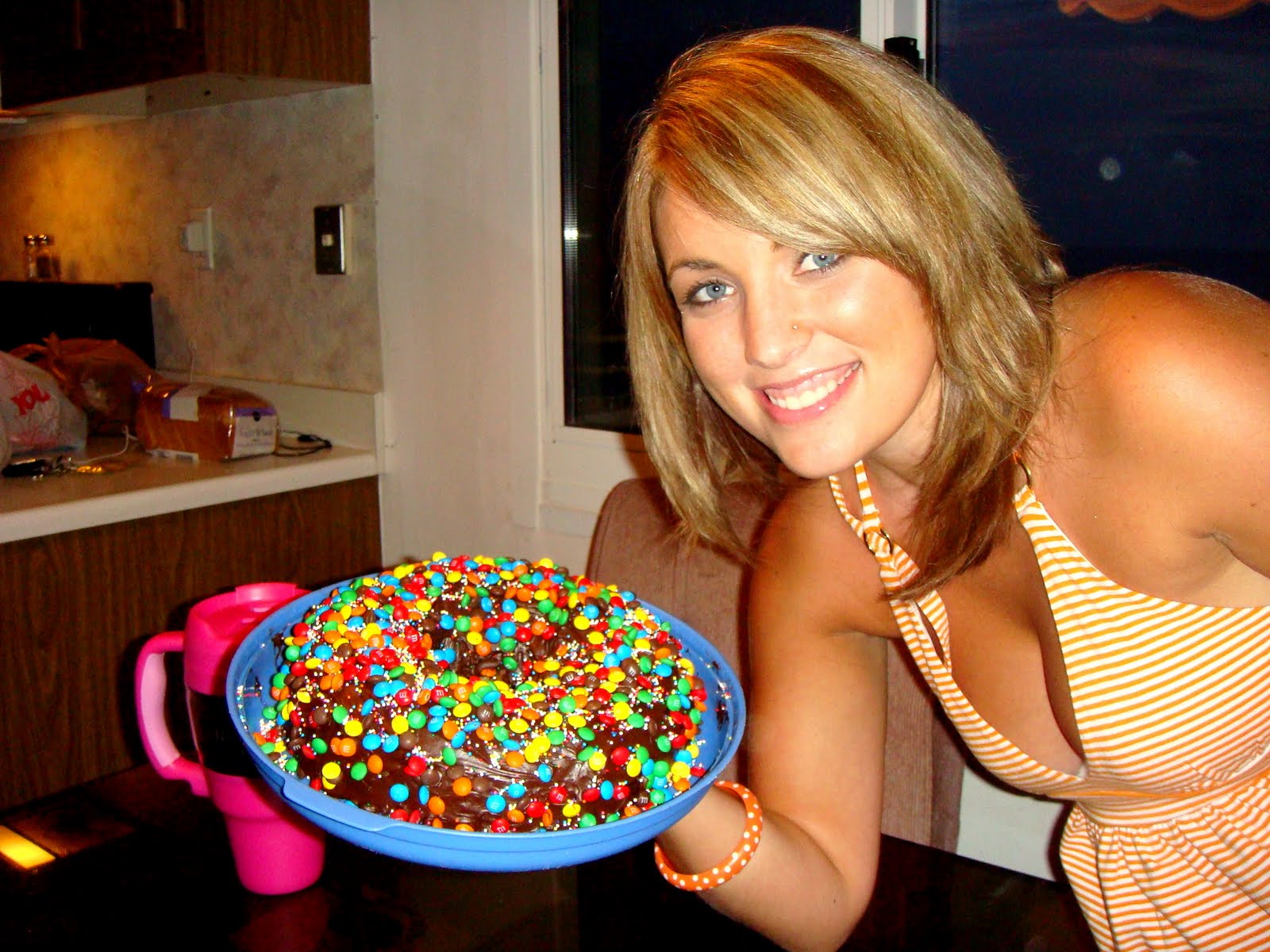 Of course we had to show Gage Tripoly and he caught on pretty quick! We were all so tired from the late night before and the busy beach day that we didn’t stay up too late though 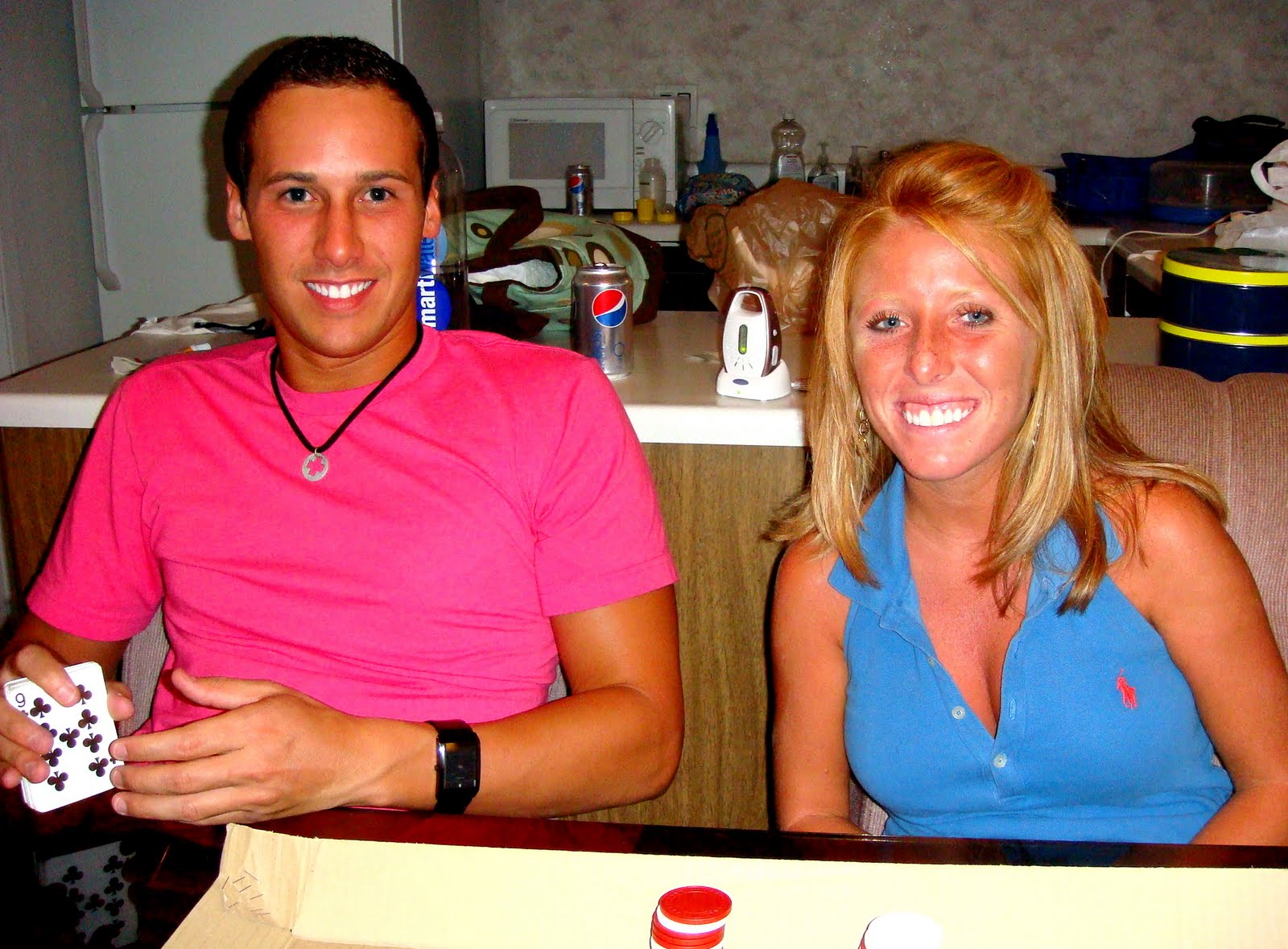 We all slept in so late on Sunday! I fed Kye at 7 and just kept him in the bed with me and played there until his nap at 8:45 then I went back to sleep! I NEVER do that but I slept until his 11:00 feeding!!! We had to pig out on some cake and ice cream before heading home! 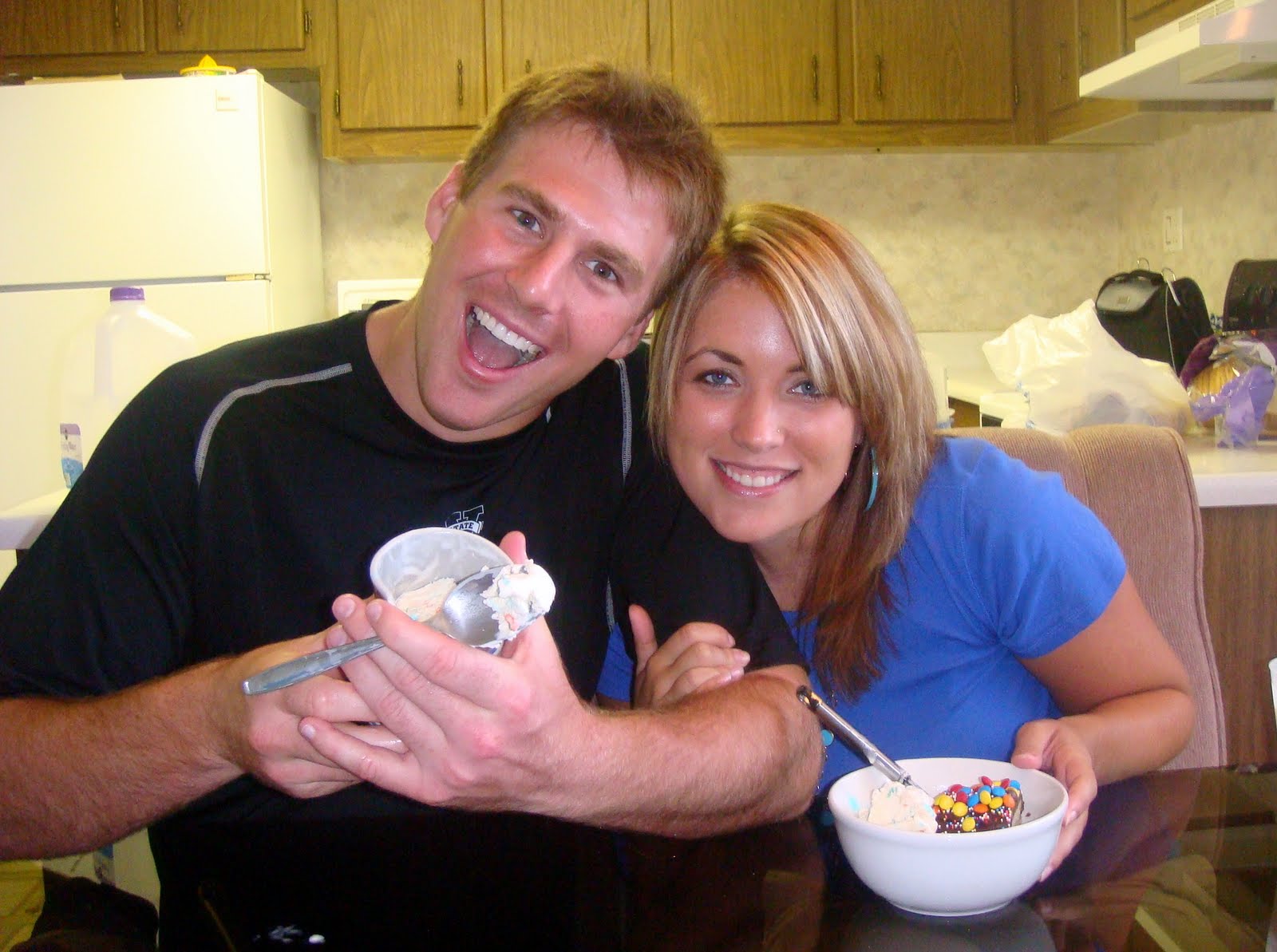 Saying goodbye to himself in the mirror! 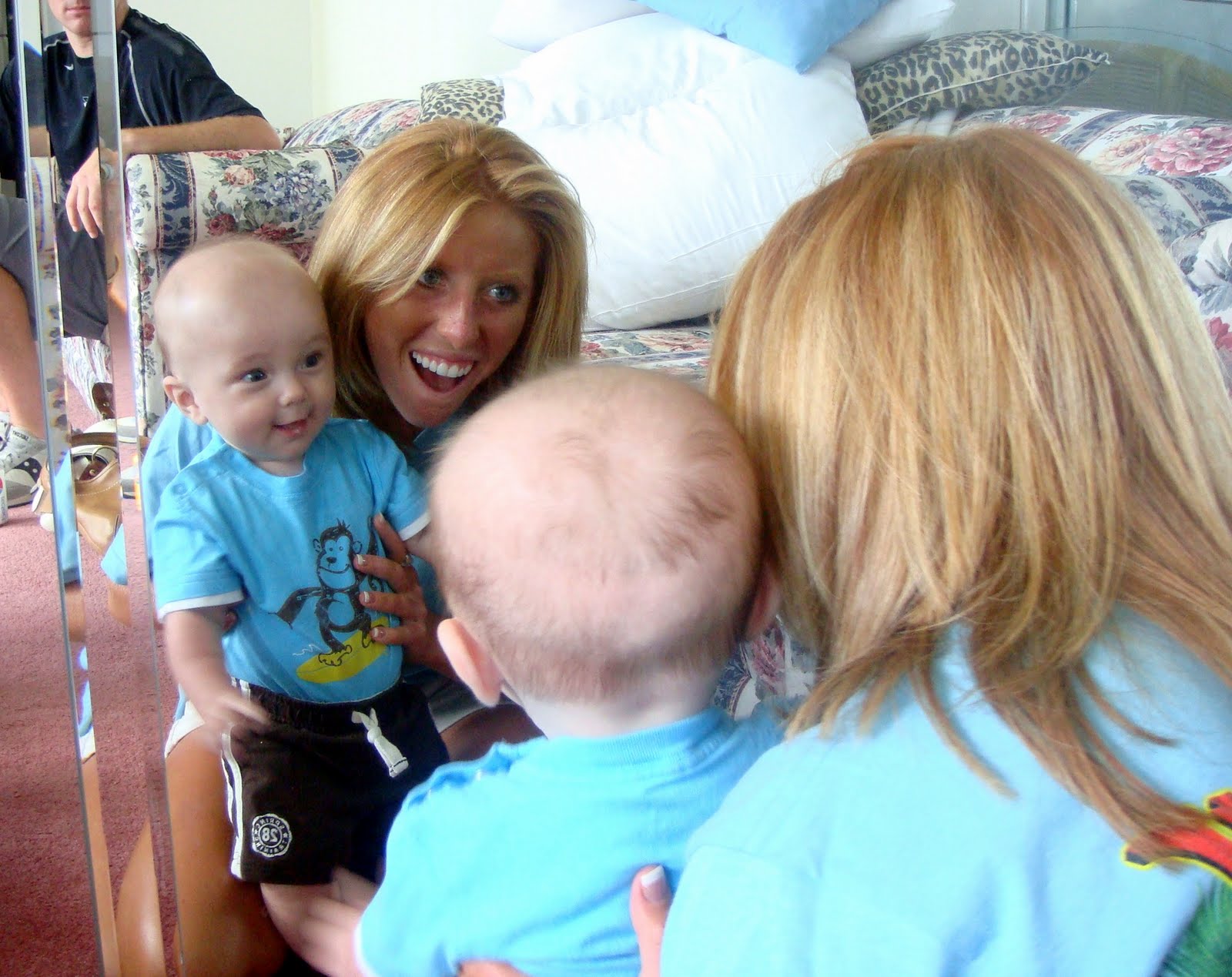 It was a fun weekend and it’s so funny to me that it was my first time ever going to Panama City! It was such a big Spring Break spot for everyone in high school and even college but if I’m going to go to Florida then I’m going to visit my mom in Melbourne not go party it up! We stayed clear of the “trashy” parts of Panama City and honestly I was much more impressed with the area than I thought I would be. There are a TON of restaurants and the beach is beautiful! The place where we stayed had mostly families so it didn’t seem half as wild as I expected. Of course we were in by 8:00 to put Kye to bed so we may just have missed all the craziness 🙂