After the crazy busy wedding weekend it feels like Kye’s birthday was months ago! Last week was one of those go-go-go weeks and I’m thankful that we were able to take time out to enjoy our precious baby boy as he turned one years old!

After his party we enjoyed playing with all of his new toys and the left over party decorations! 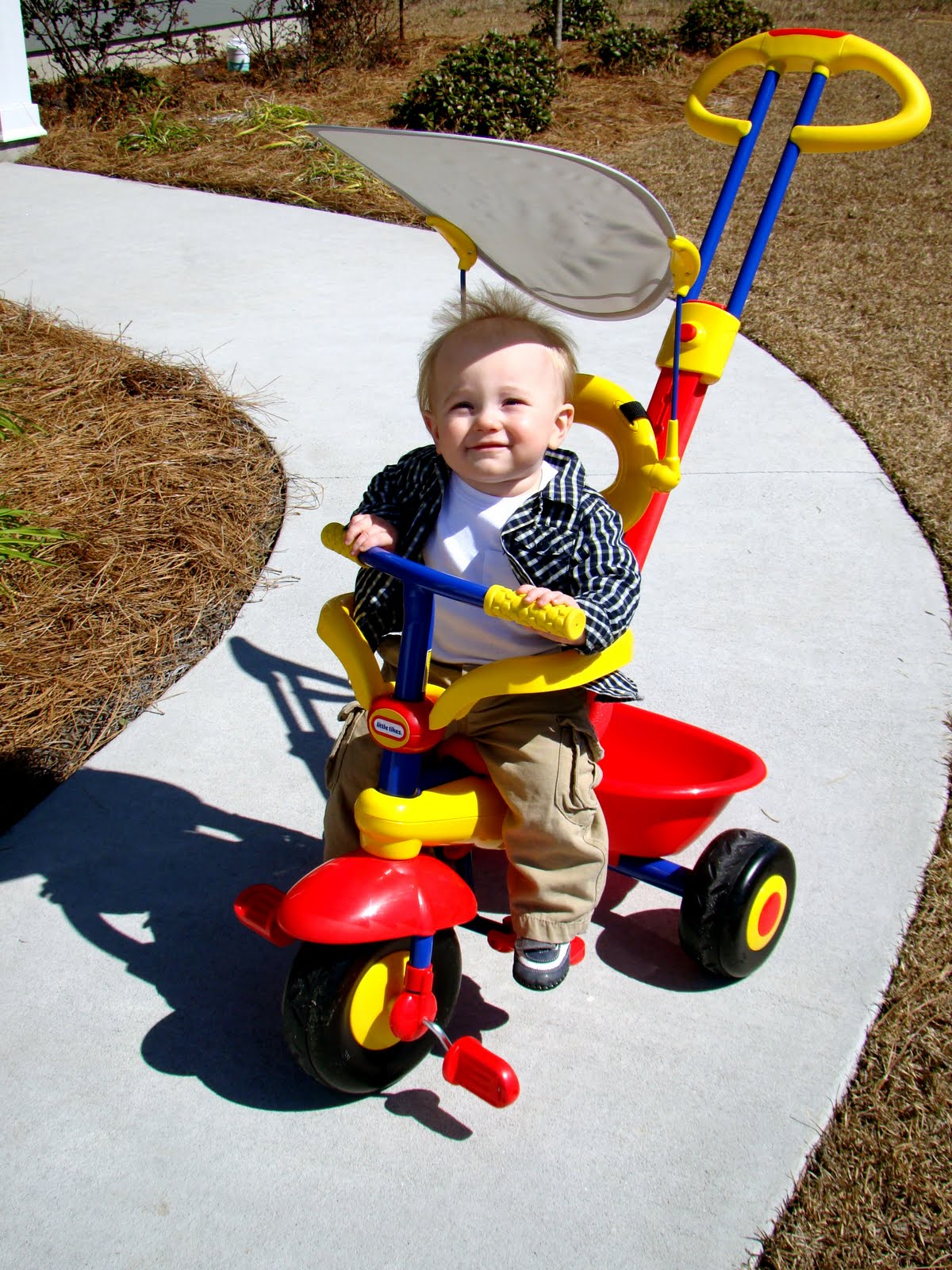 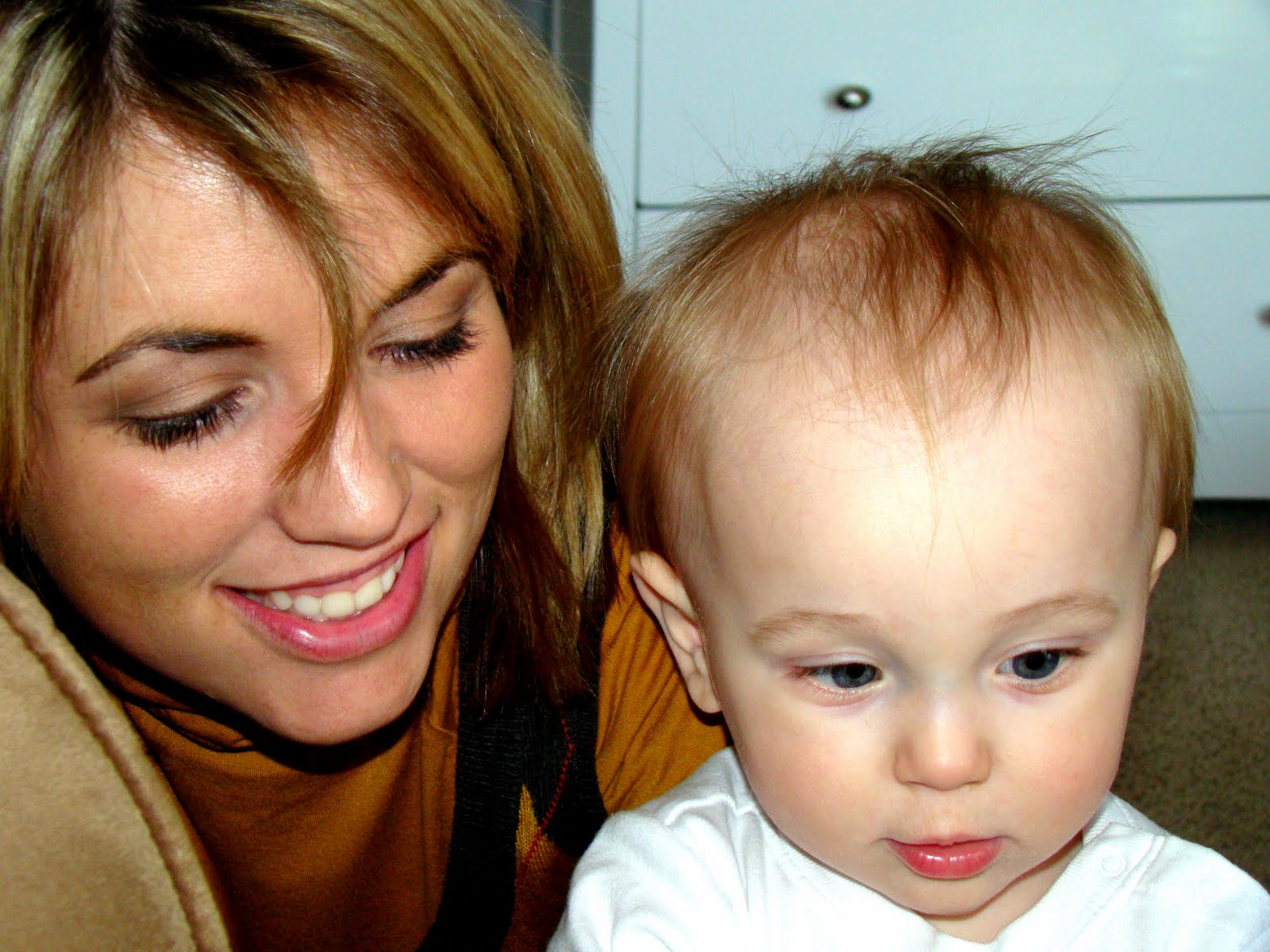 making the balloons stick to our hair! 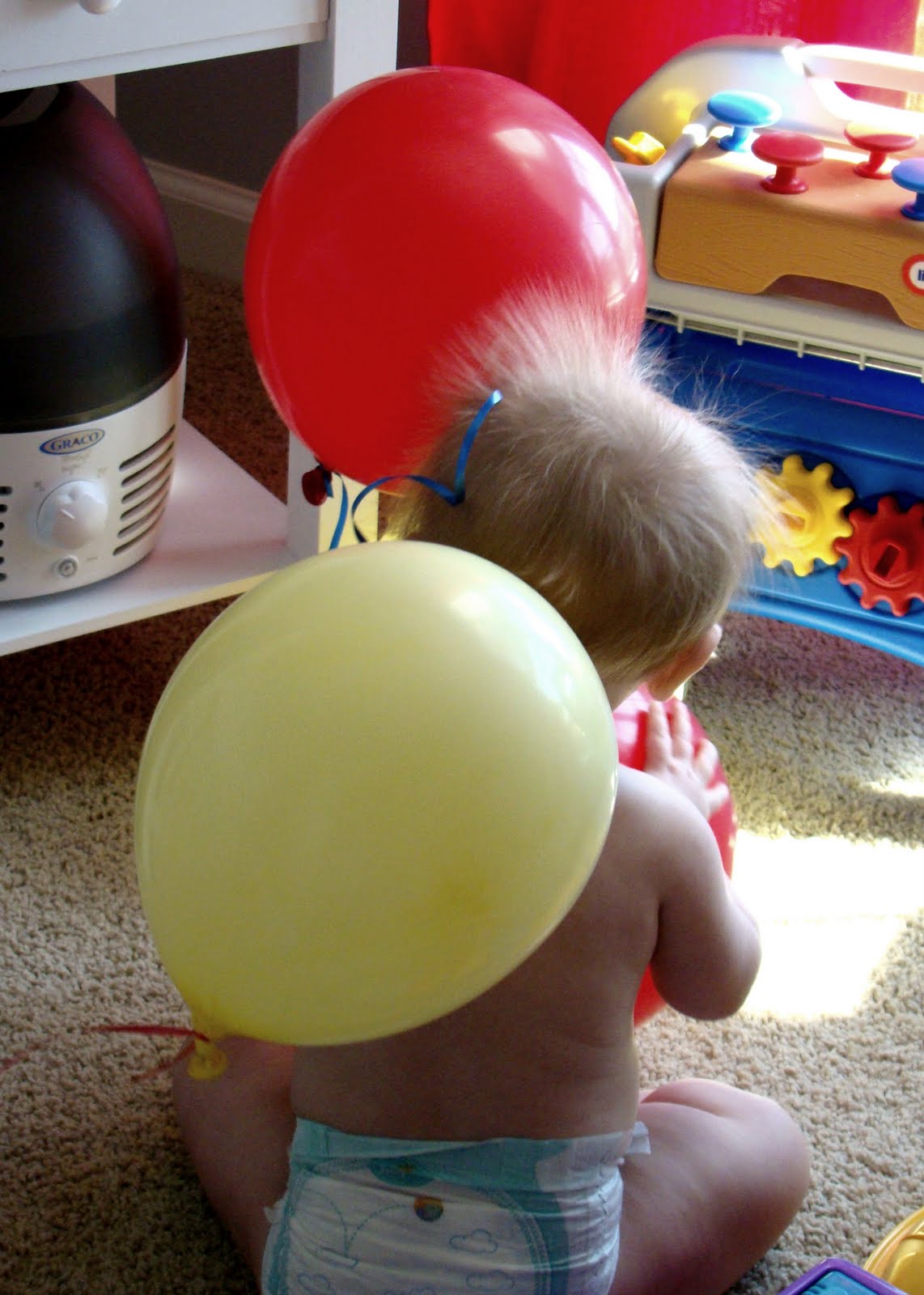 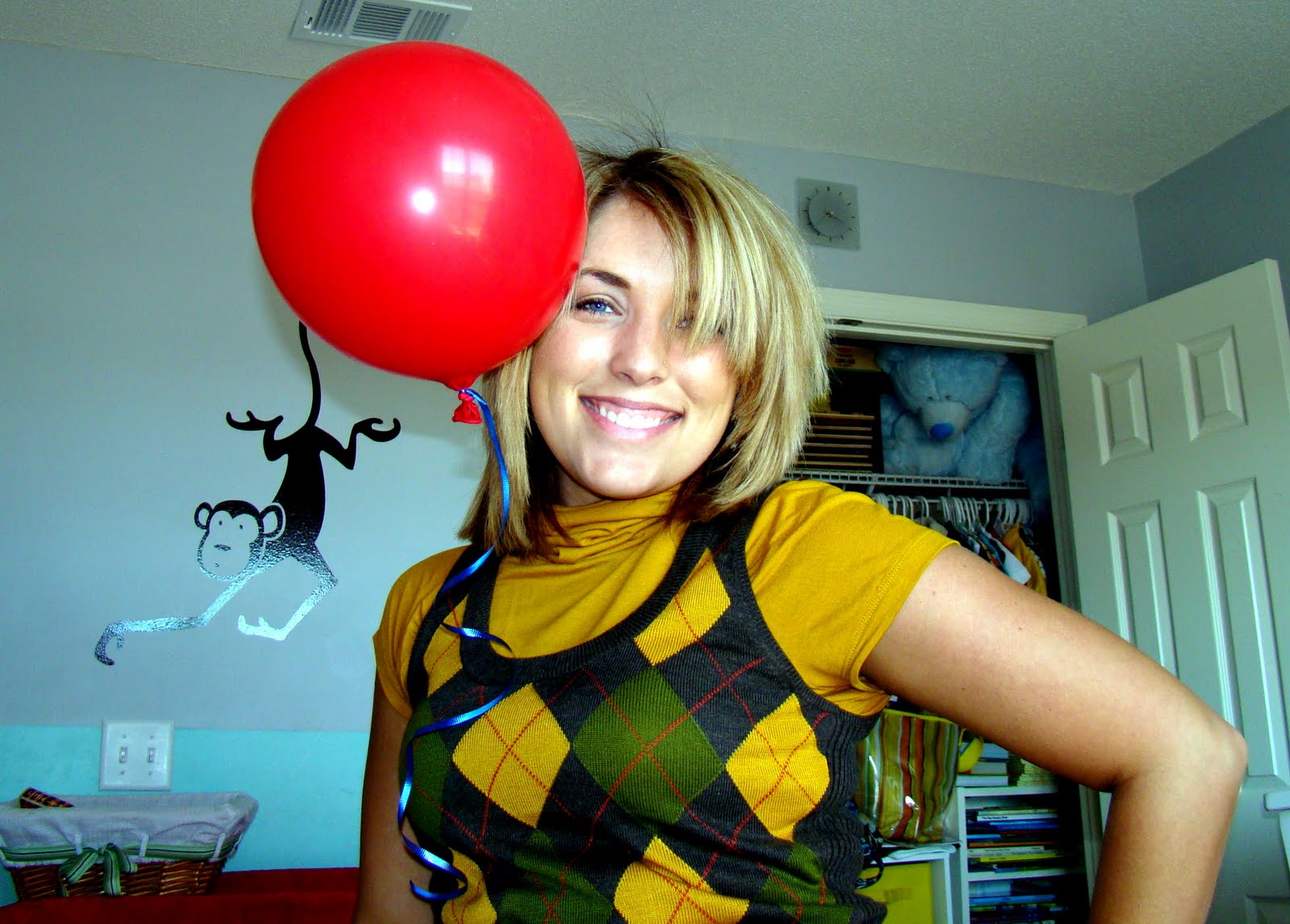 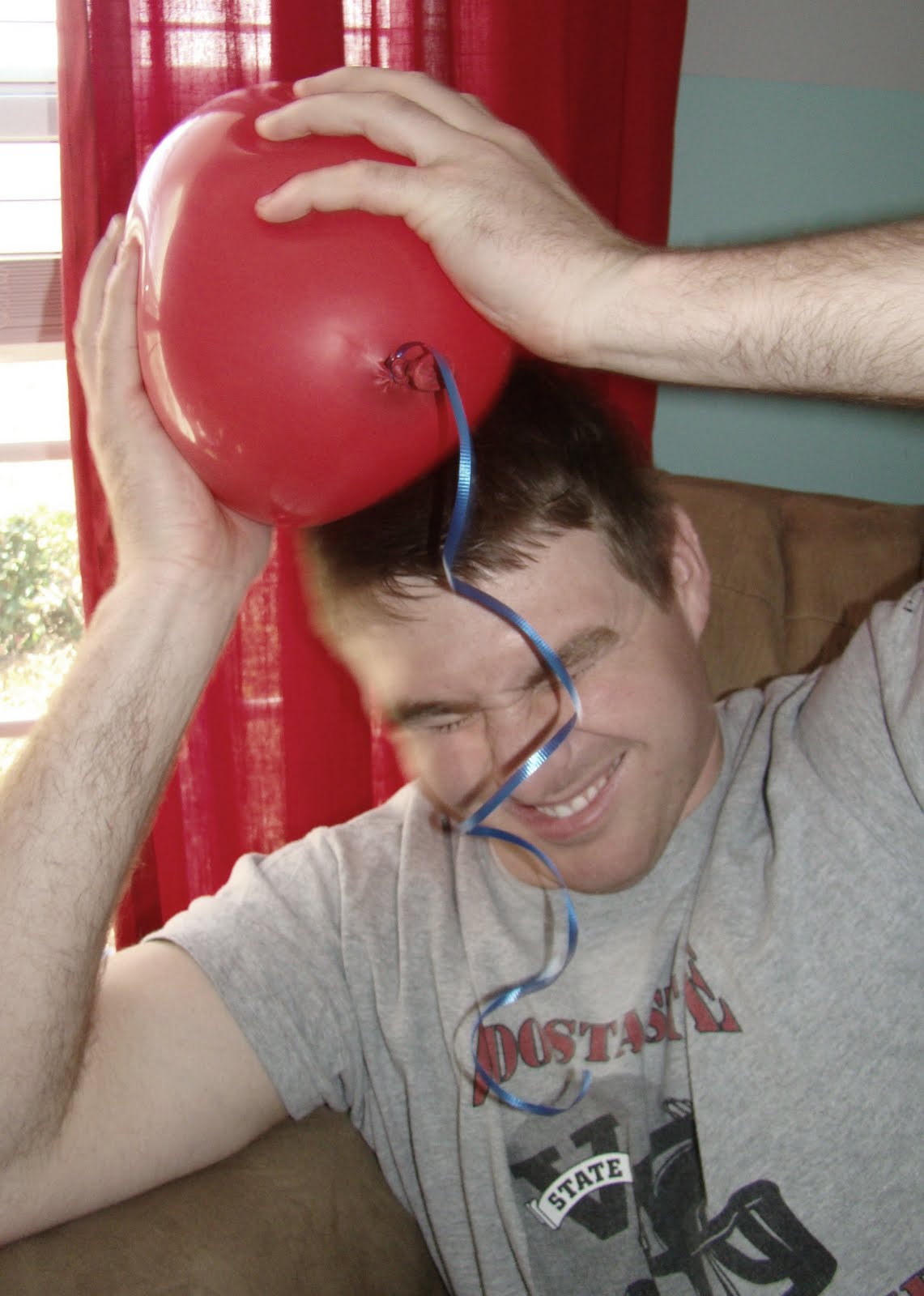 A while back I joined the ToysRUs Birthday Club and Kye and I were surprised to learn that it includes a birthday balloon, crown, AND the store singing “Happy Birthday” over the loud speaker! We ran in to buy Kye’s turtle sandbox and got more than we planned on 🙂 So neat that they do that!!! 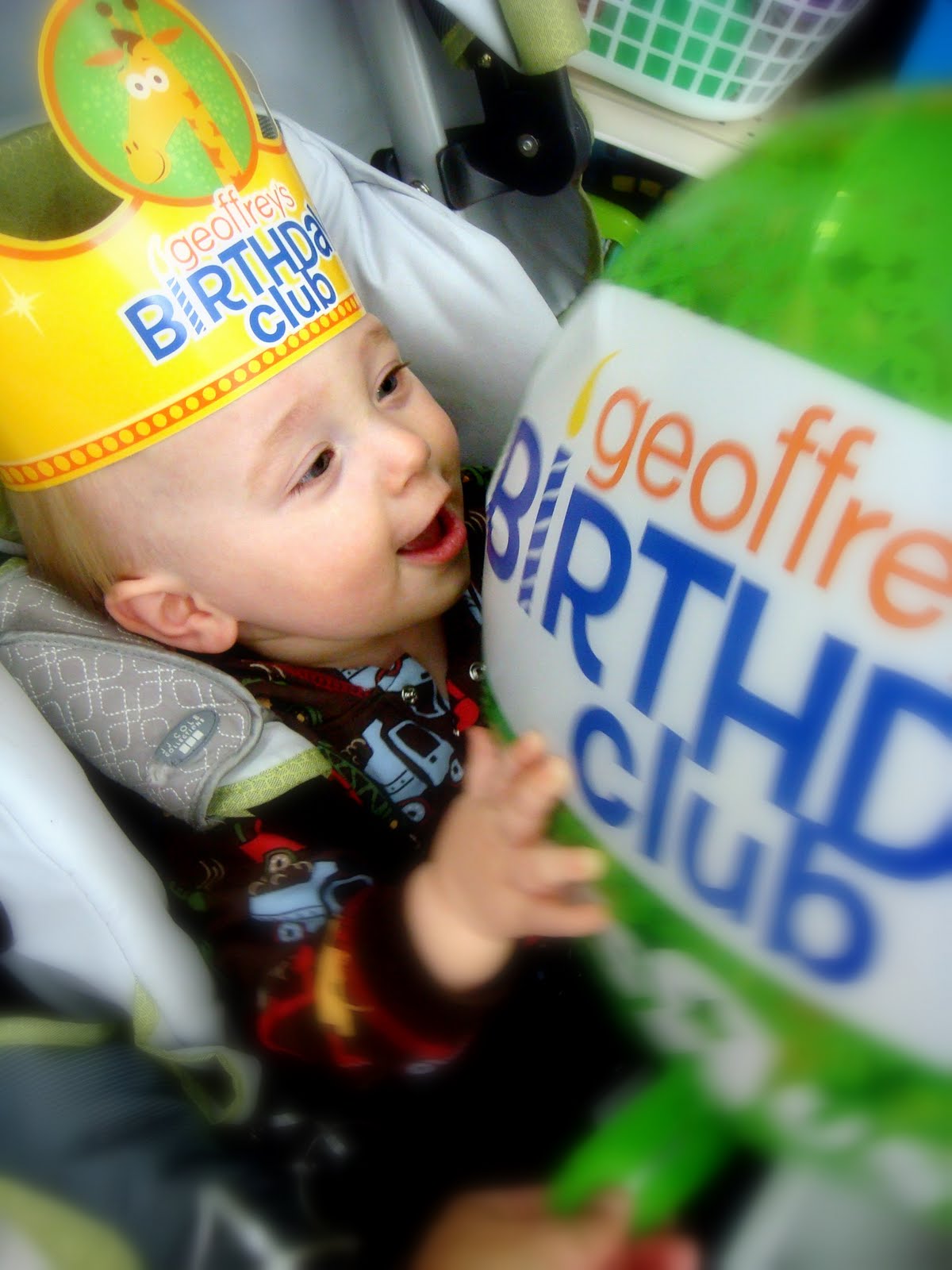 Kye’s actual birthday was on Thursday and it was pretty much a normal day. I was PUMPED that he’s finally one and can start doing all the things that the books and such say cannot be done until a baby hits their first birthday. His first nap of the day I threw a blanket in his crib with him! Yay for no more SIDS worries! 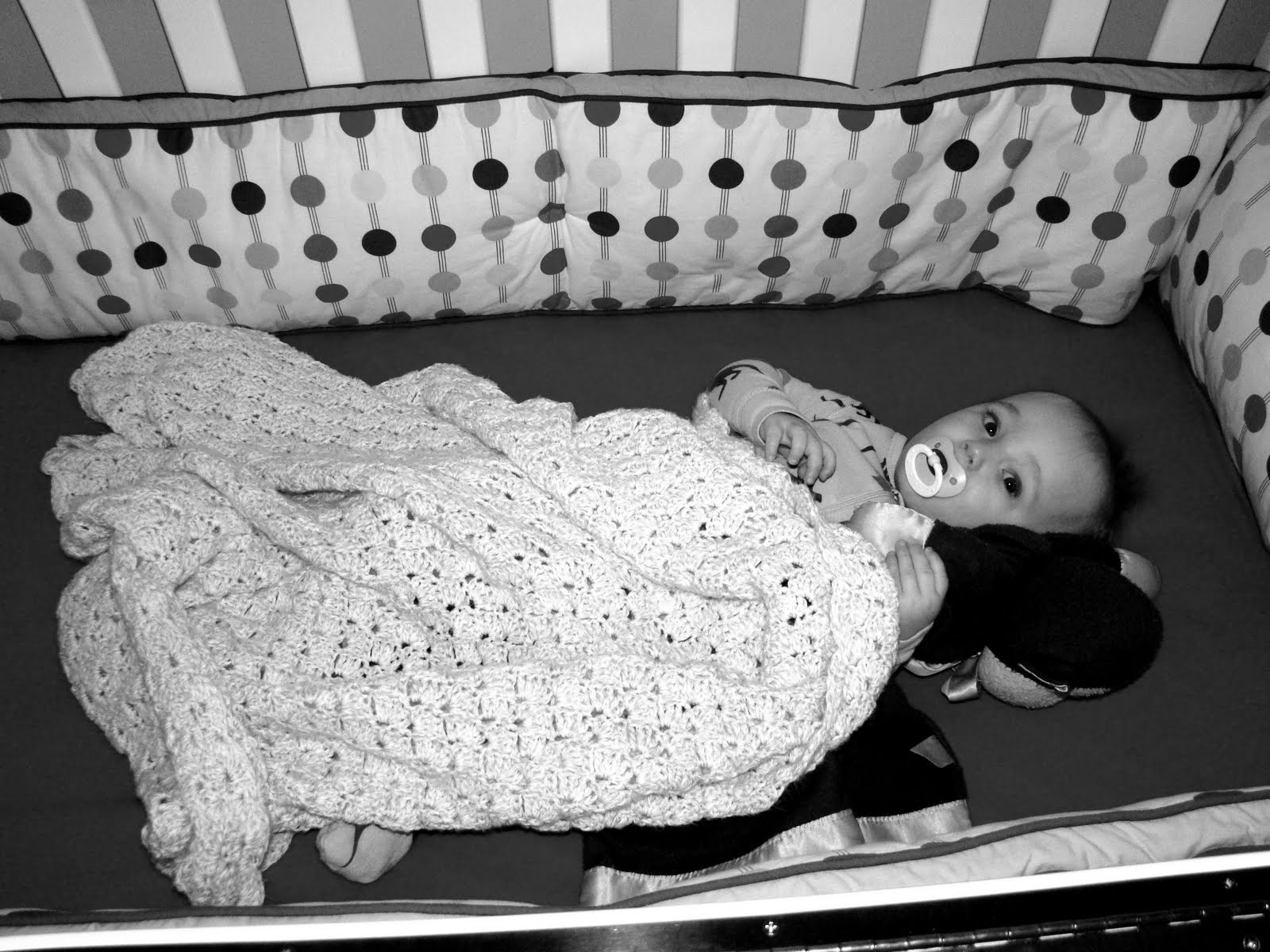 Then for lunch I fed him peanut butter! Peanut butter is one of my FAVORITE foods and I have been so excited to let Kye have some! I decided to make him an Elvis style sandwich (peanut butter with banana) for his lunch and see how he’d like it. Duh, he loved it and here’s a video of him chowing down! Of course once he started digging it the thought hit me that he’d never had any nuts before and they reason “they” say to wait until children are one is b/c he could be allergic and that just because he’s one doesn’t mean he isn’t allergic! oops! We were leaving for the wedding the next day and as he was eating I freaked out and started googling like a mad woman to see what signs to look for in case he was allergic so I’d know if I needed to rush him to the hospital. No worries though, he not only enjoy the peanut butter but he also didn’t die or show any other symptoms of allergies! Whew!!! 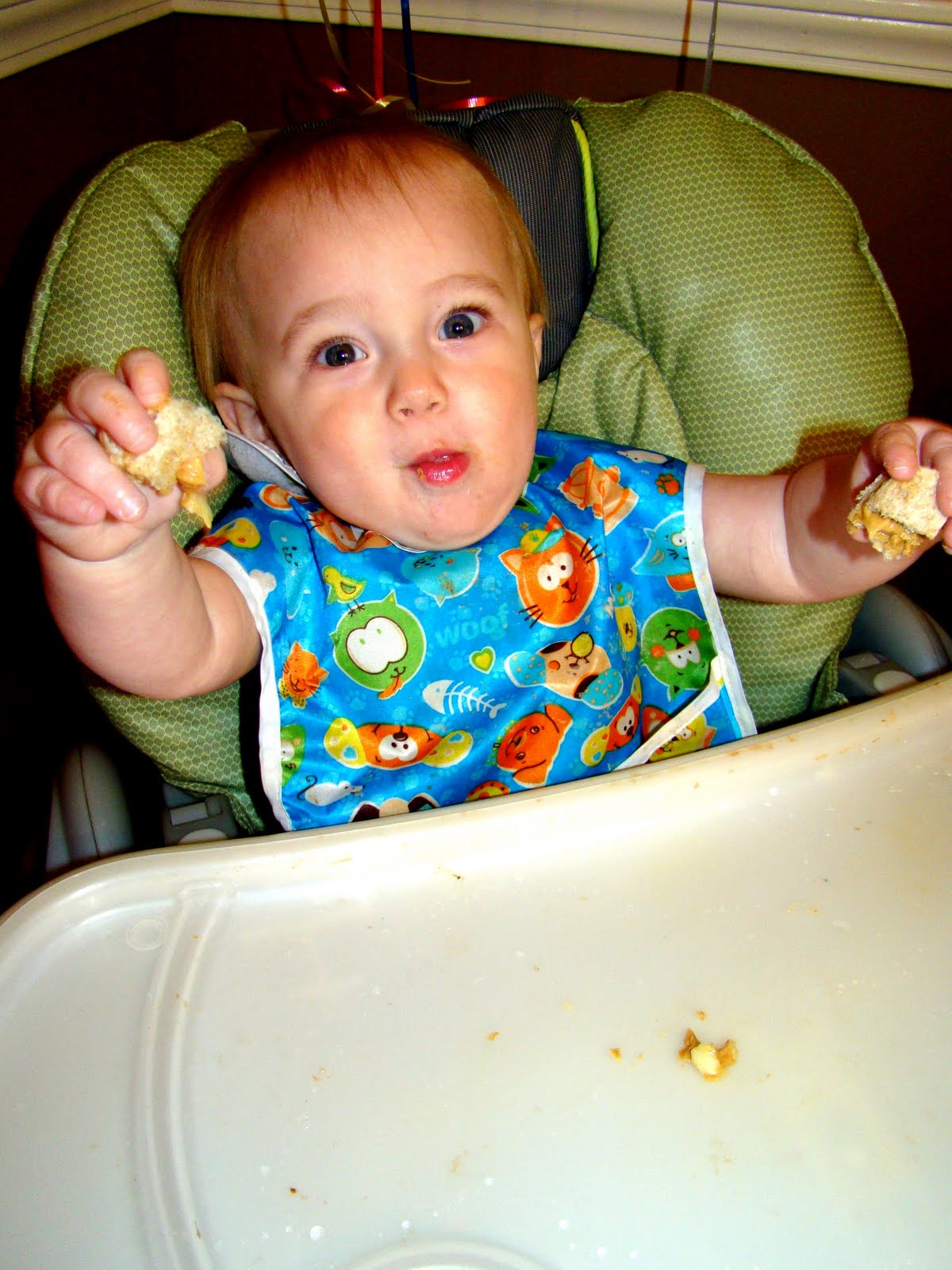 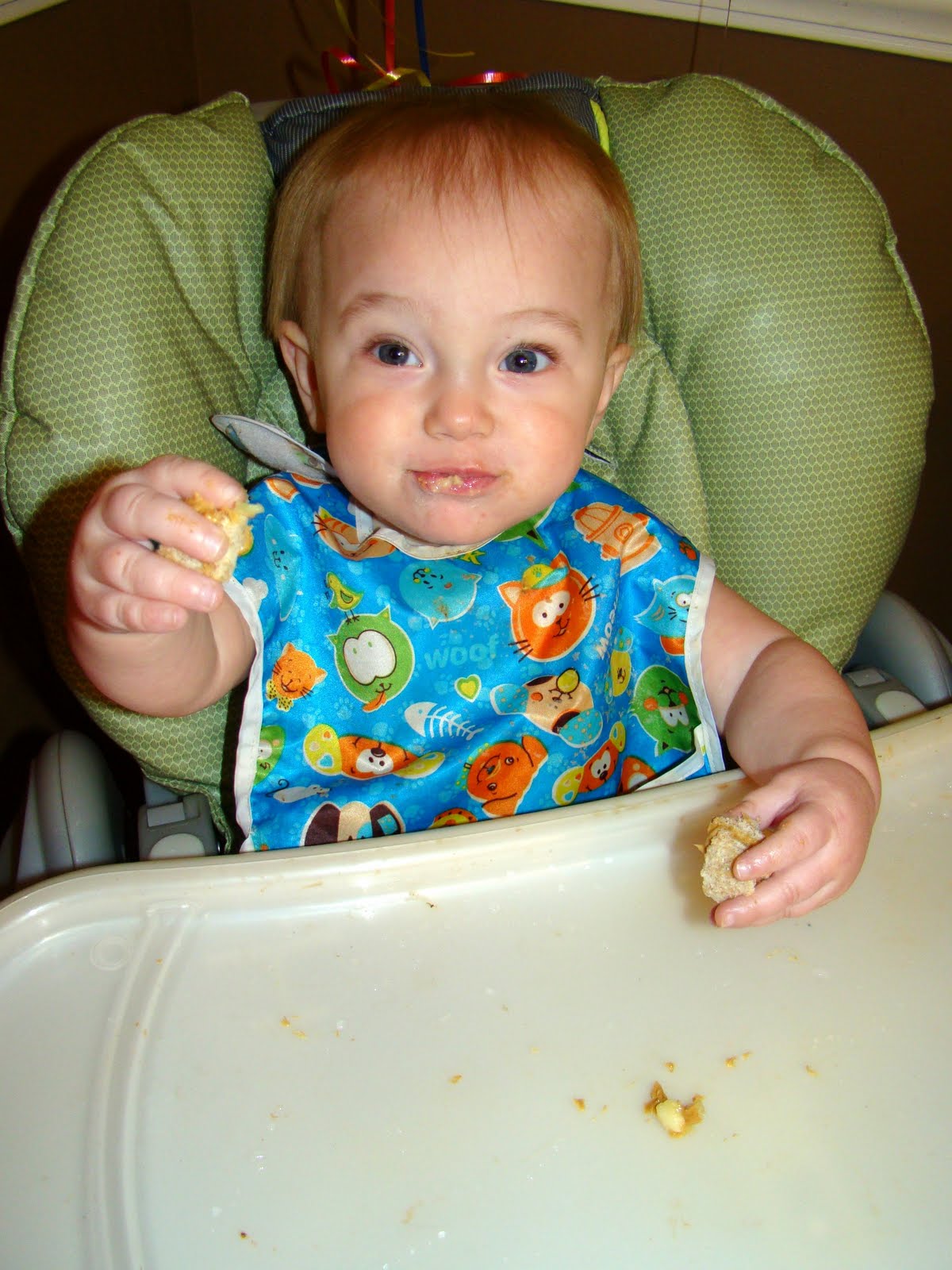 In the afternoon we enjoyed playing with his new toys including the cute little mirror book Grandpa sent for him! While playing my dad actually called and said that he and Audrey were on their way down for the wedding and wanted to stop in to wish Kye a Happy Birthday in person!!! Such a great surprise! 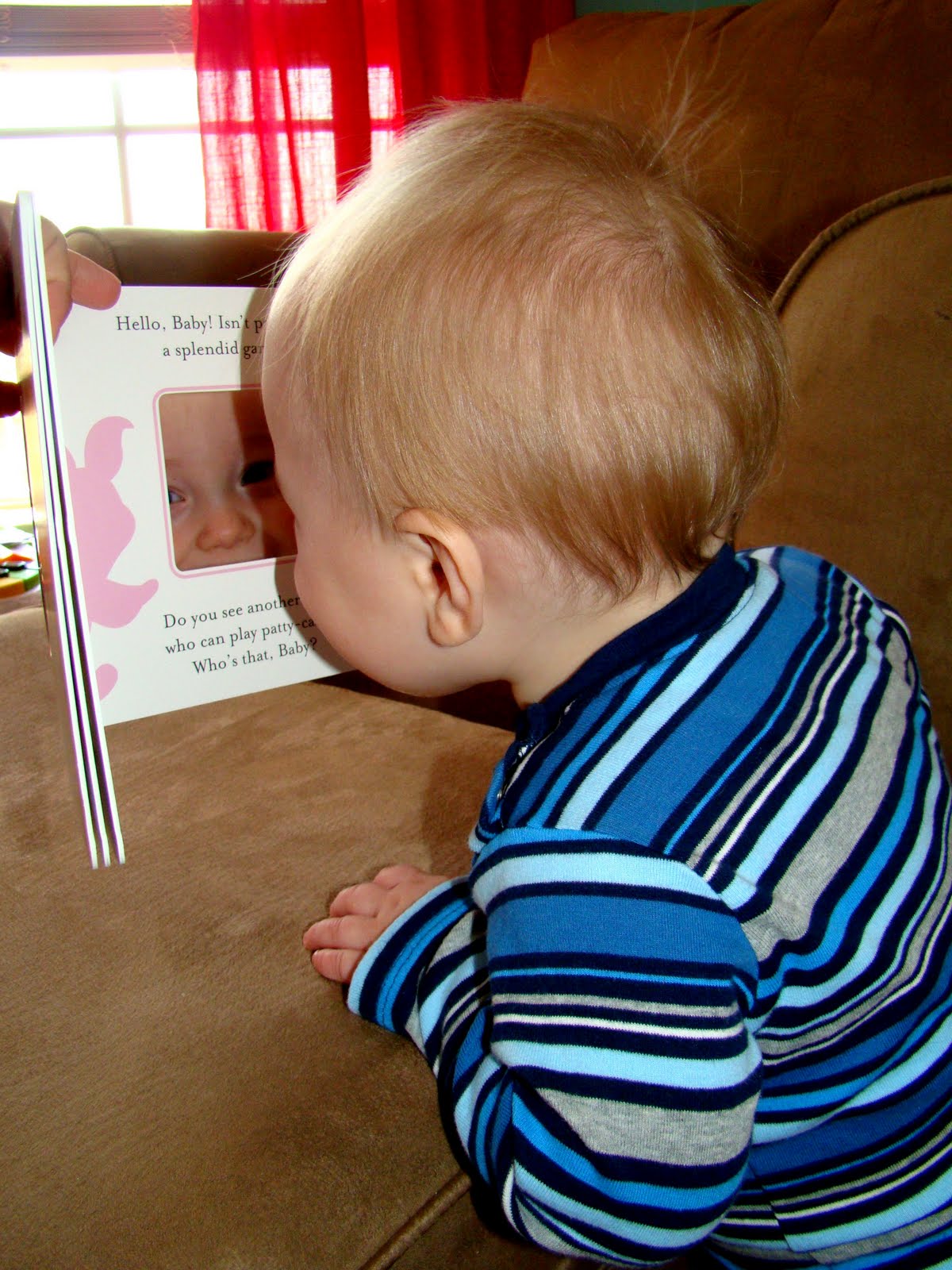 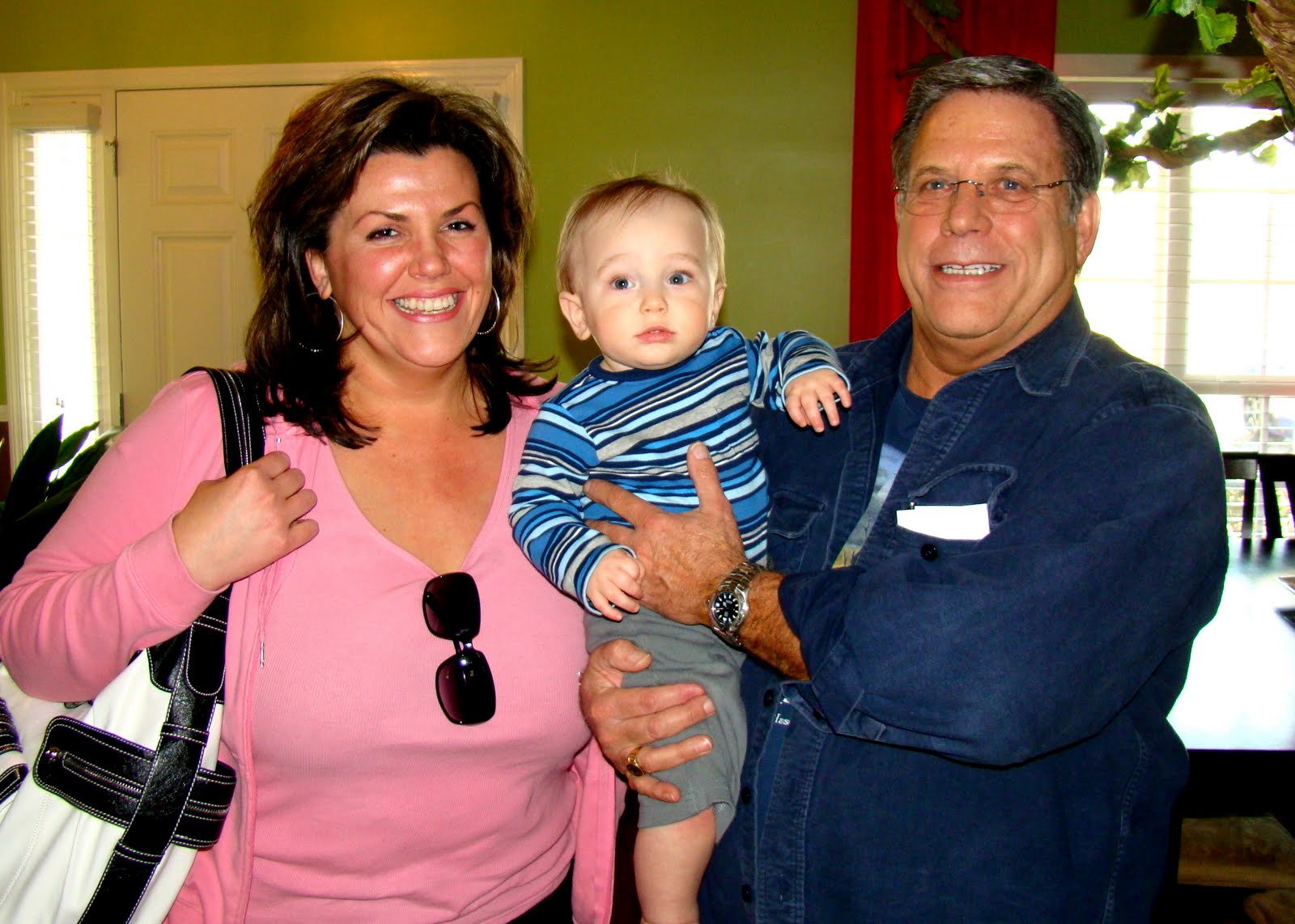 And it was great too as they were able to take a picture of our little family on Kye’s big day! 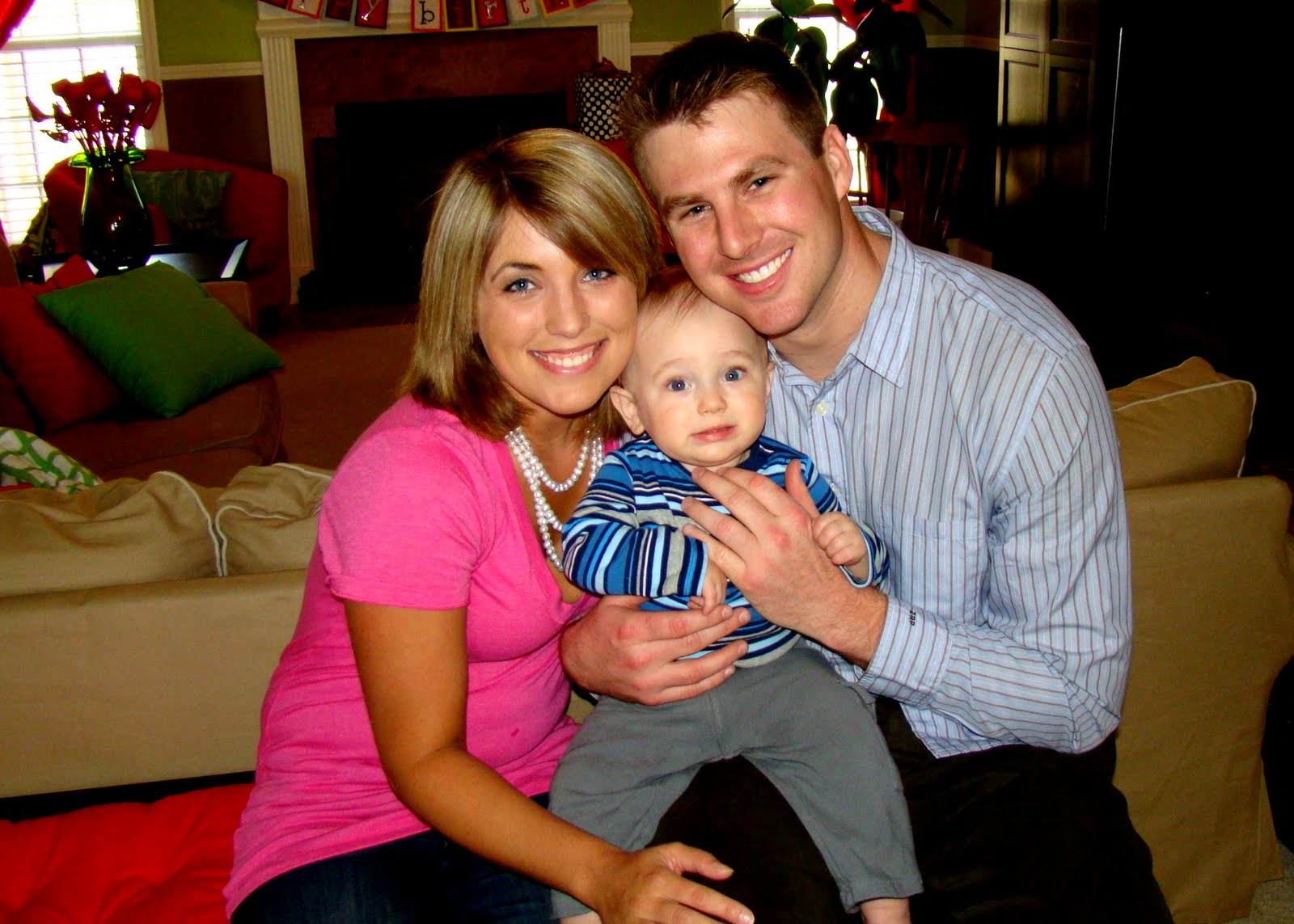 Before dinner we played Kye his Captain Zoom Happy Birthday CD (a tradition my mom always had for us, we each had a cassette we listened to on each birthday!) and let him open his presents. He did a little more opening than he did at Christmas but he still wasn’t super into it! Where do you guys buy your wrapping paper? I had such a hard time finding birthday paper I liked! I ended up going to Target and just getting plain stuff. Oh well! 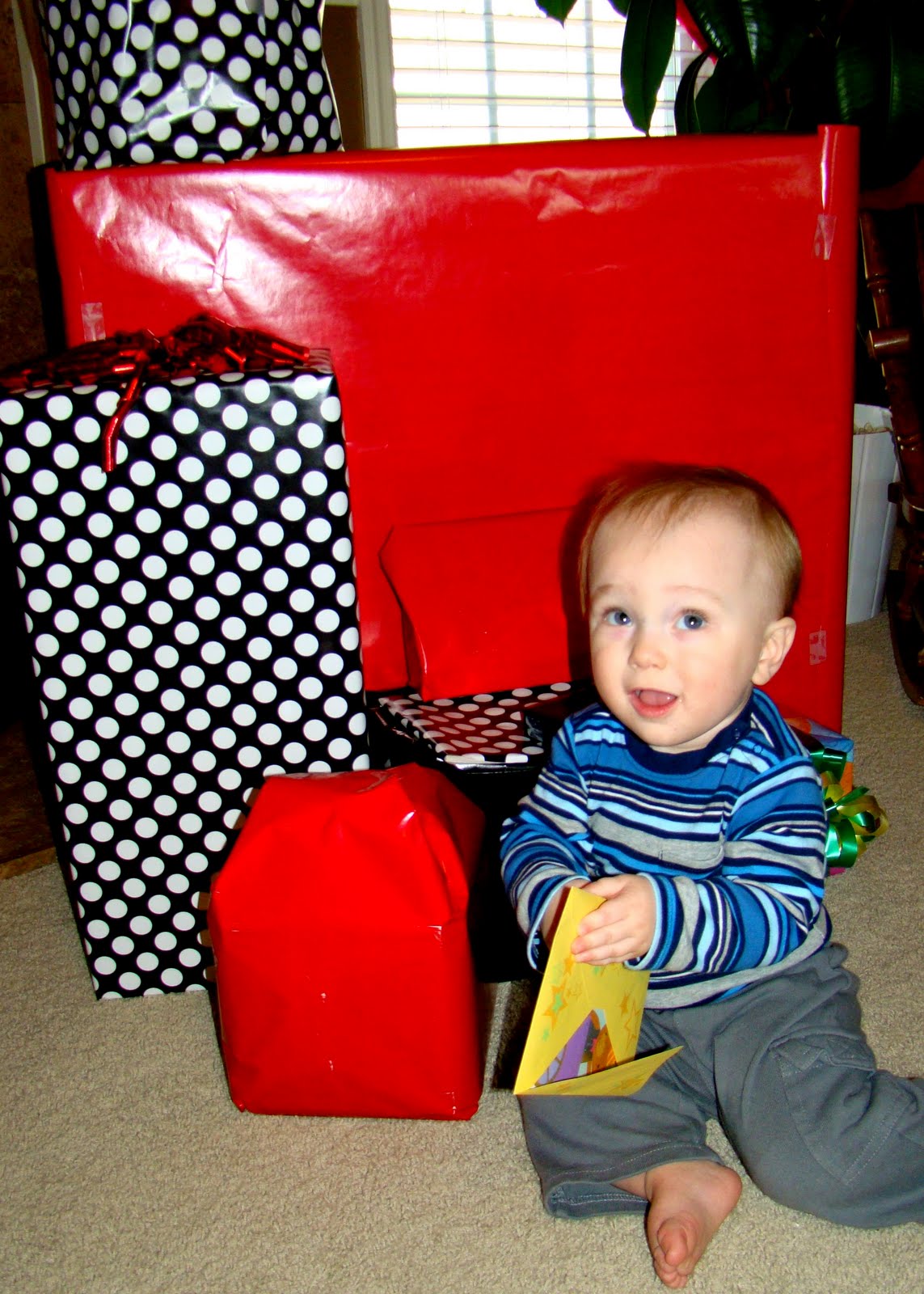 all his cards from SO many friends and family! 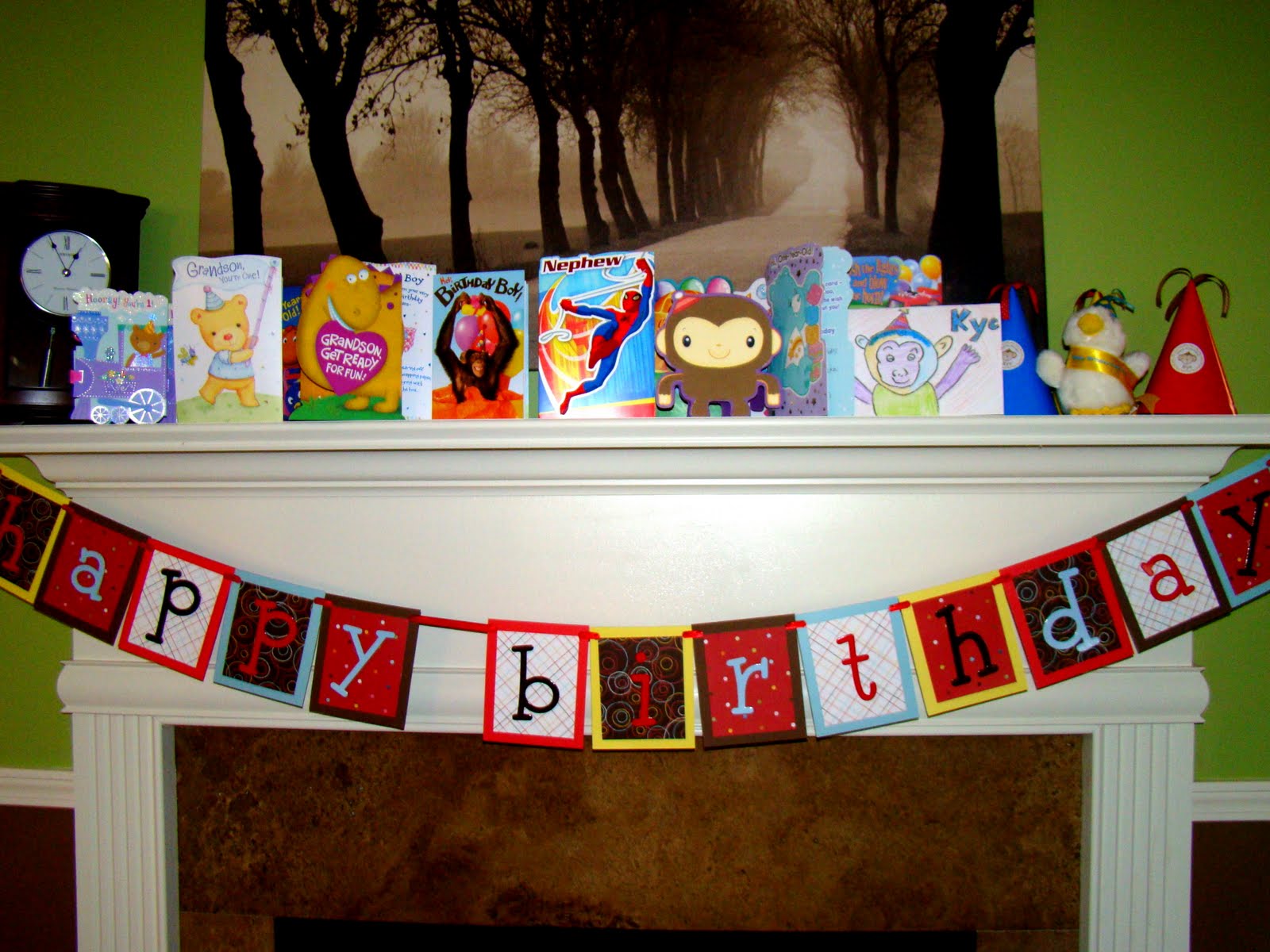 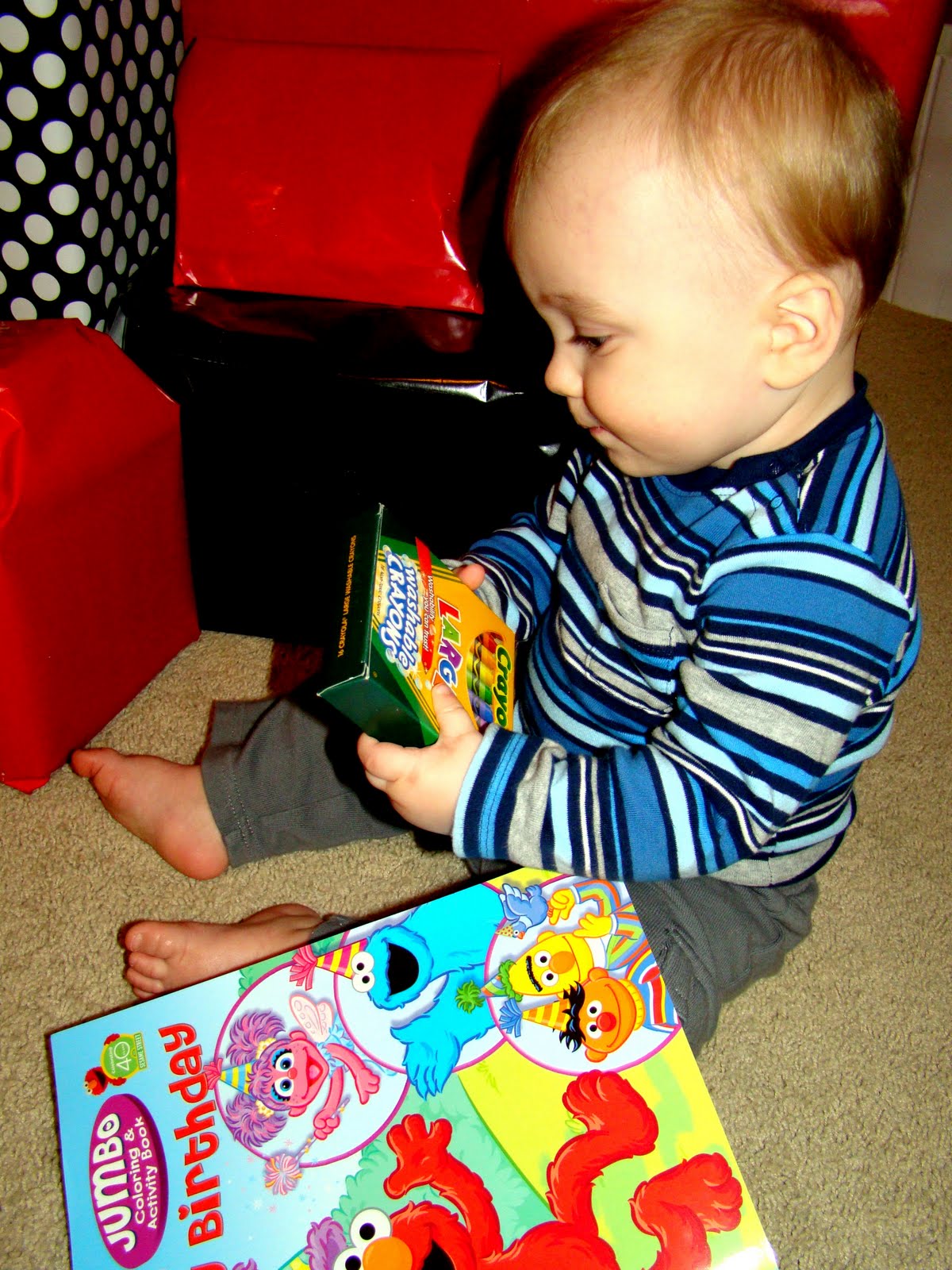 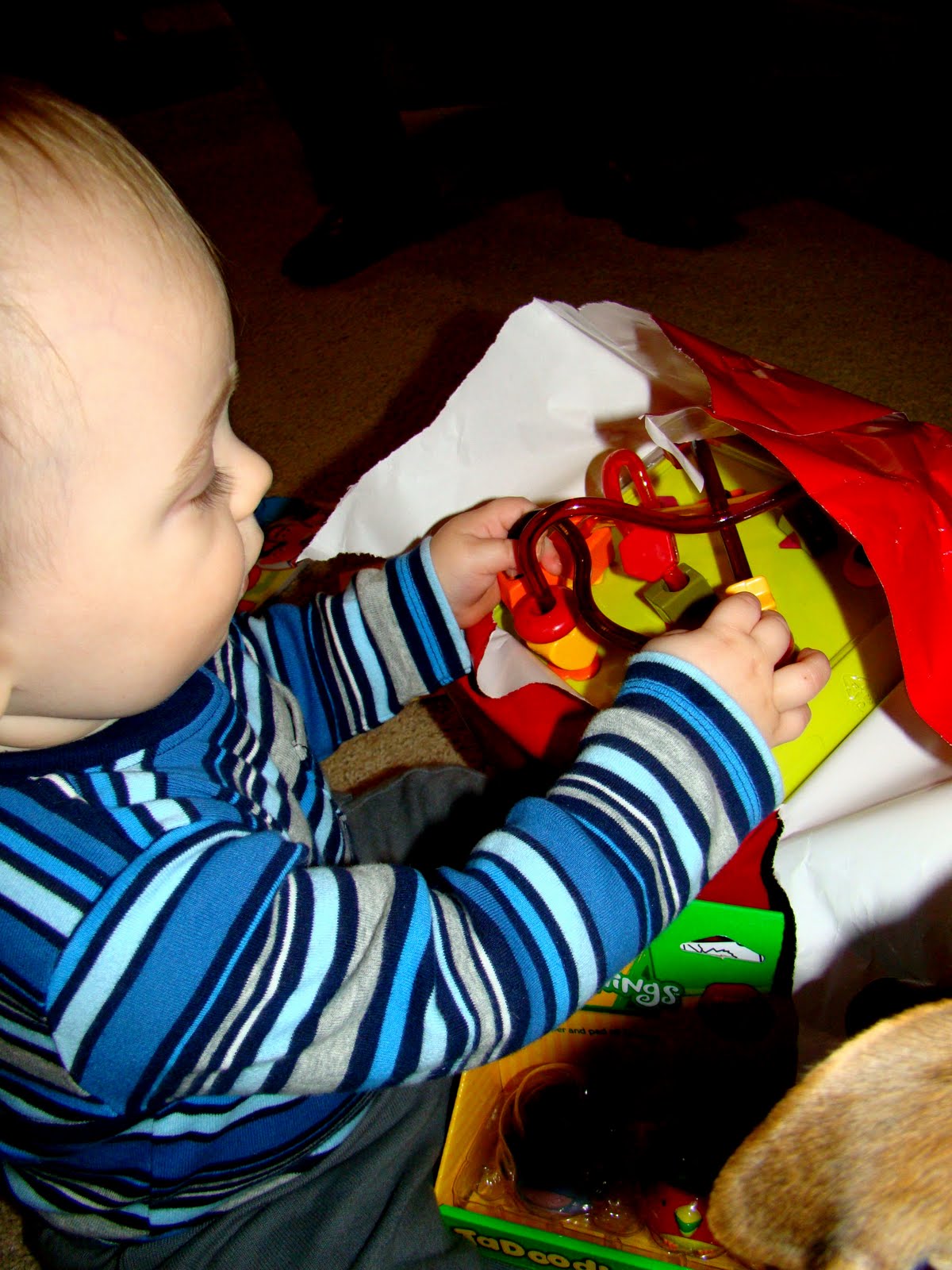 playing with his new drum! 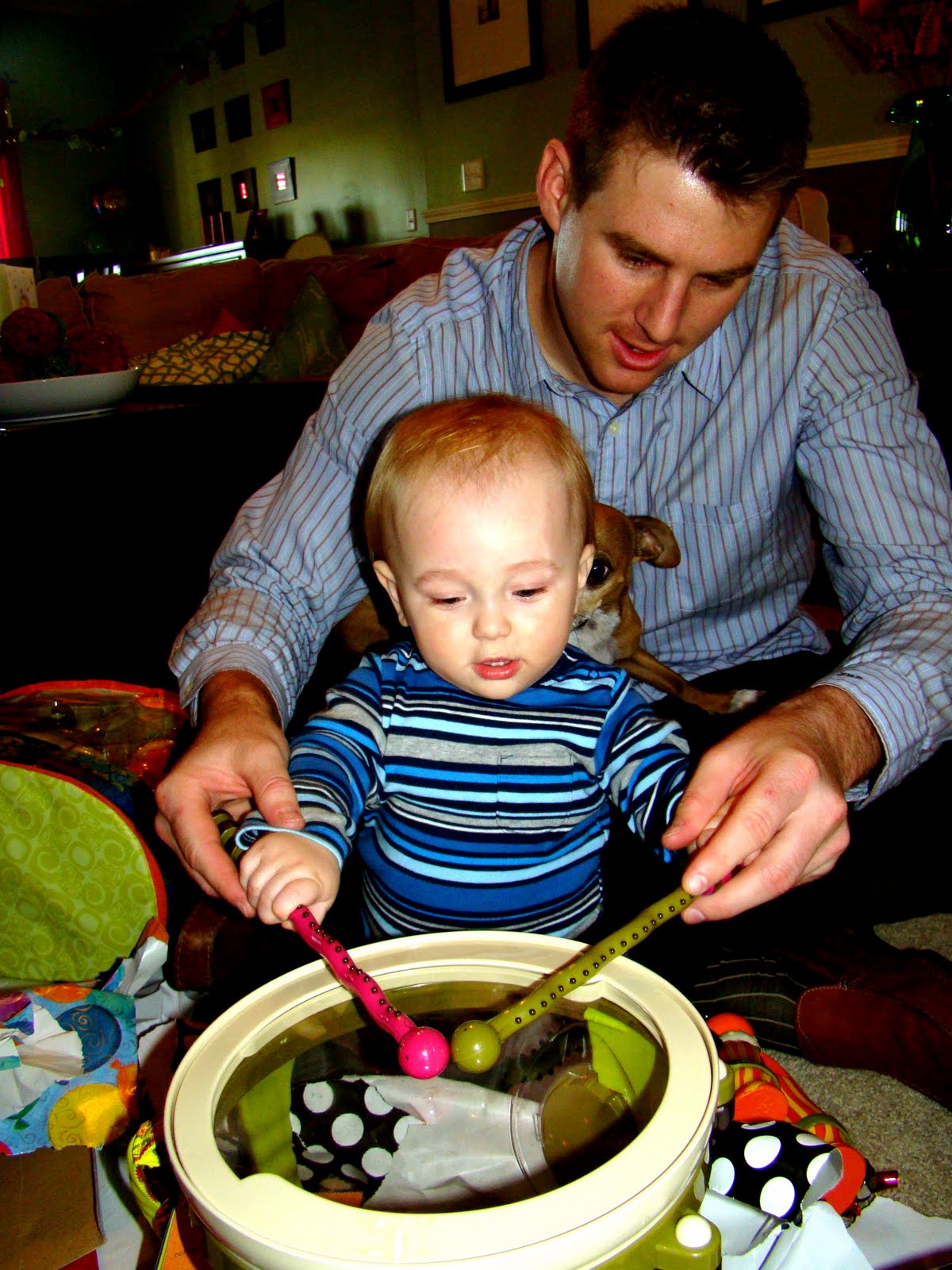 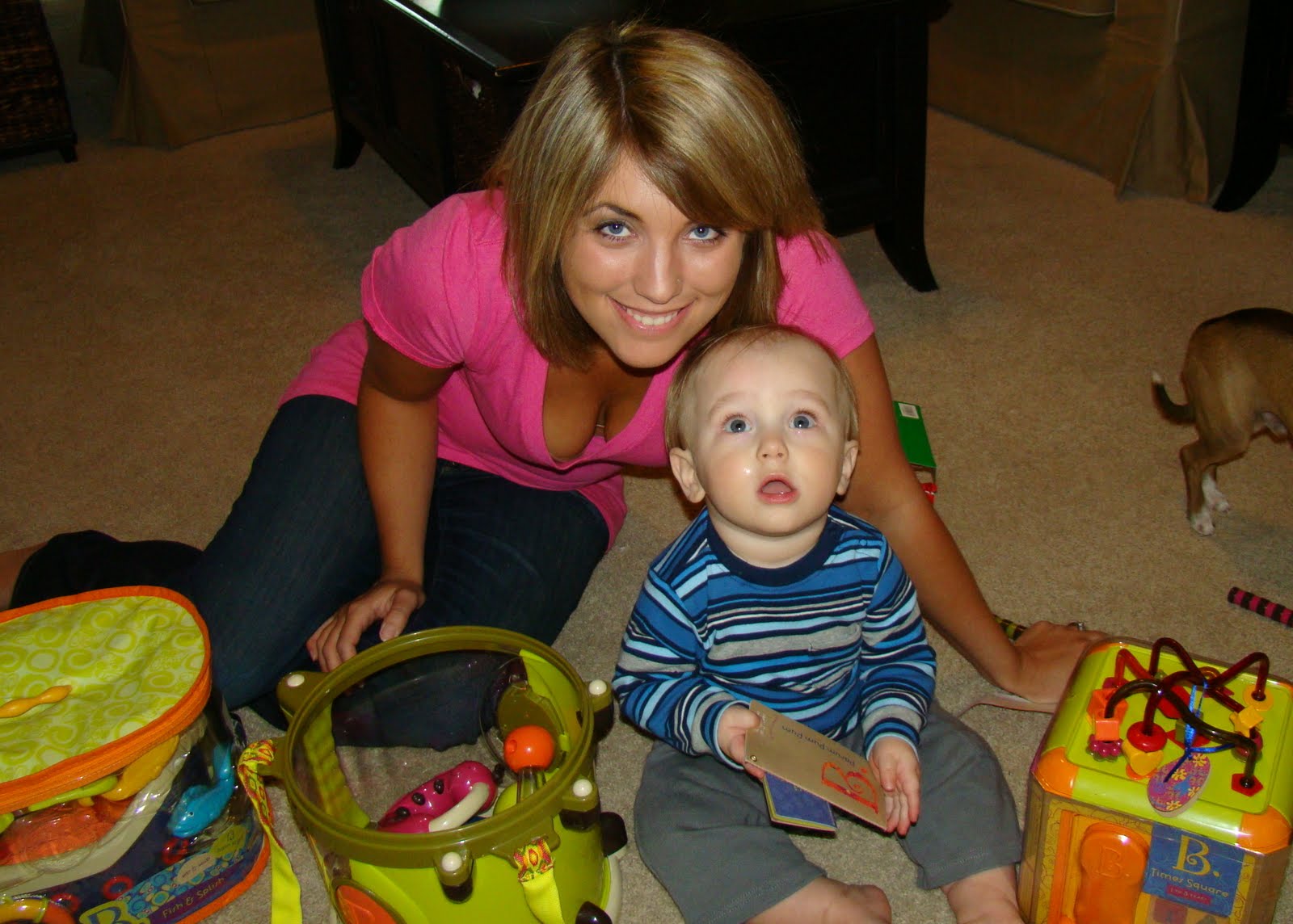 with ALL of his presents! 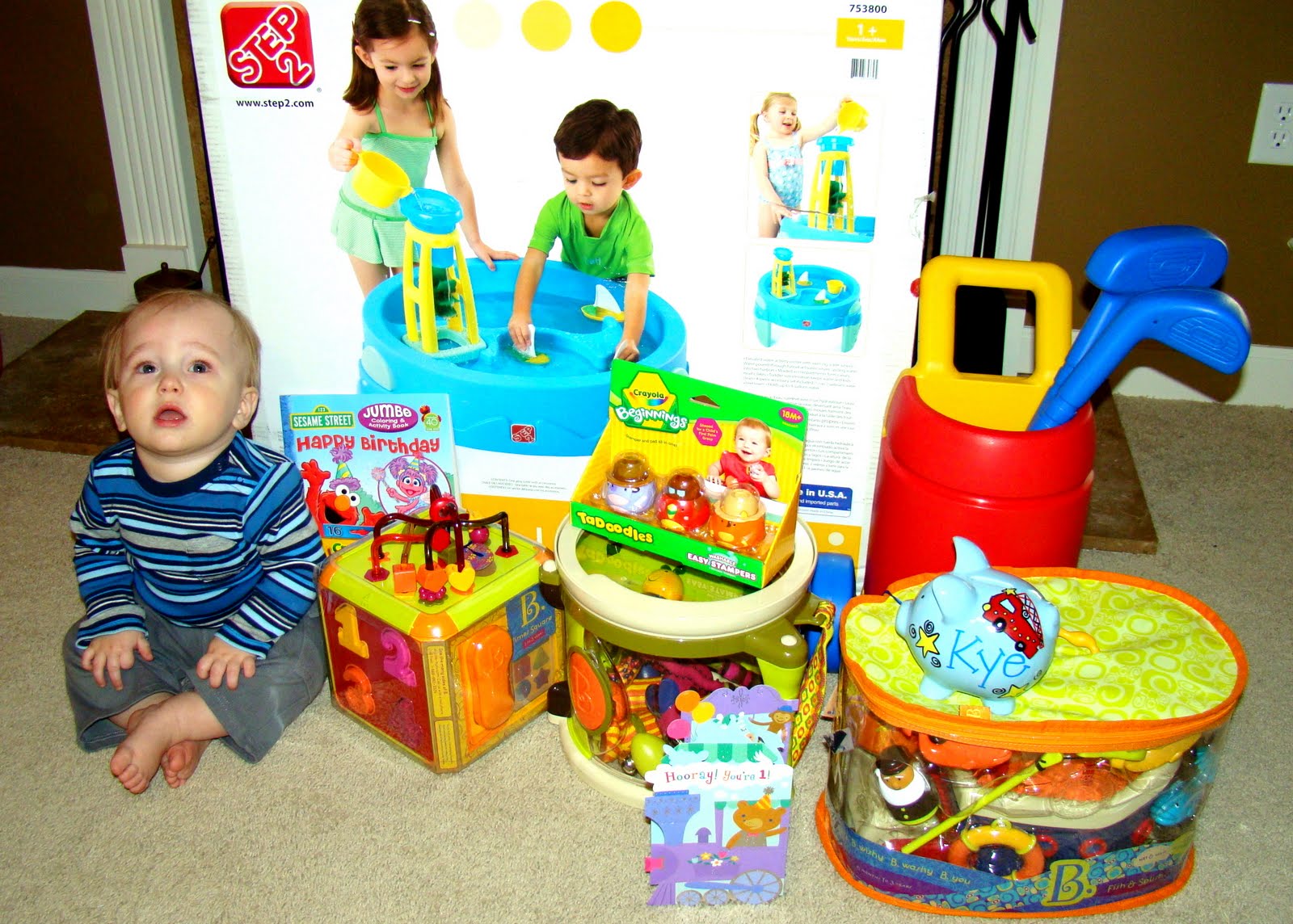 Zach, of course, is the most excited about the golf set (it’s for ages TWO and up but he really wanted to get it for Kye!) and I’m the most excited about a new line of toys I discovered at Target. It’s called B.toys and I LOVE them! We got him three different pieces and here is a link to a blog entry devoted just to these great toys! 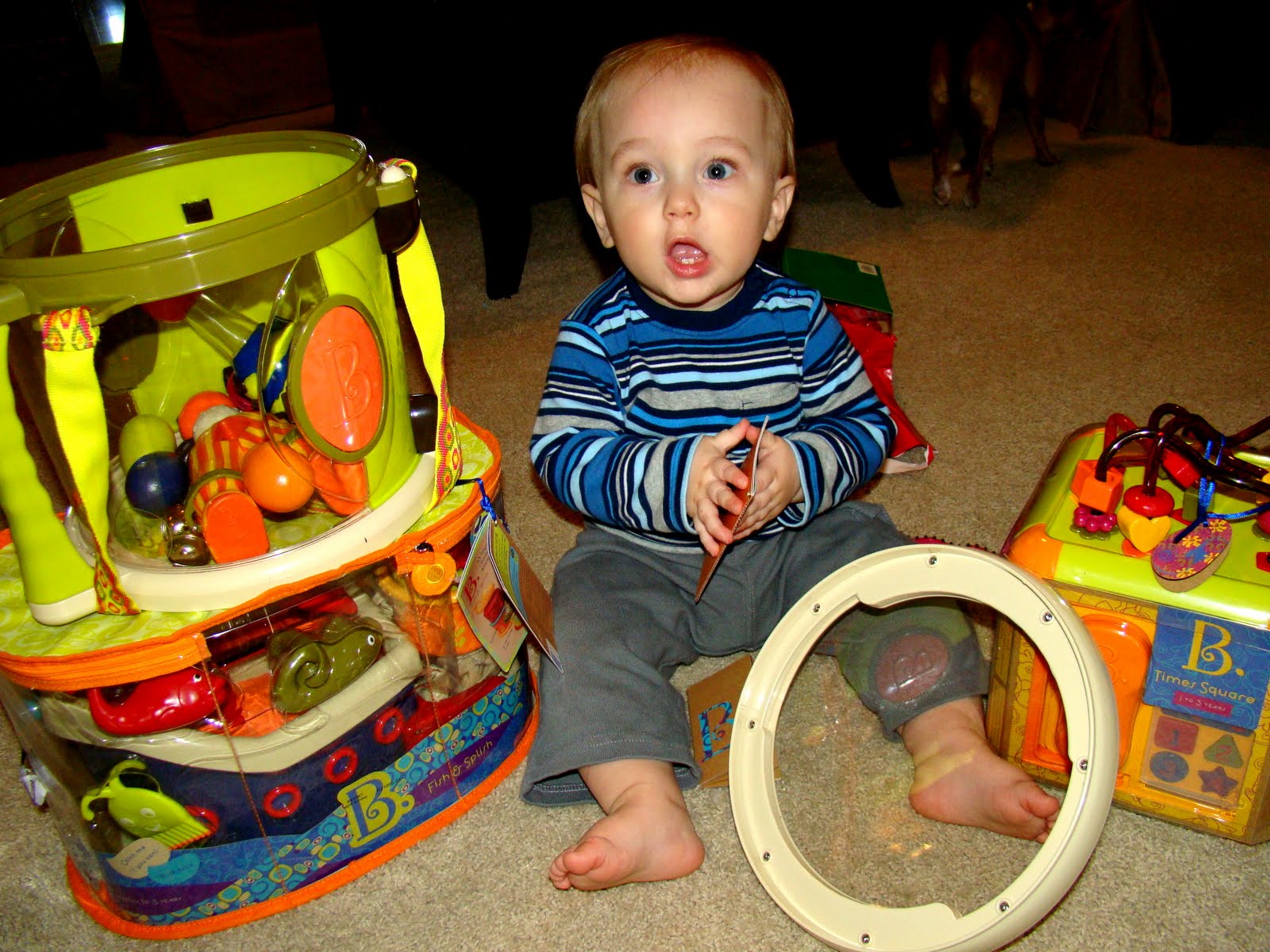 For dinner I made one of our family favorites (cheesy chicken and biscuits). He is so funny now when we eat dinner because when we drink from our cups he copies us and drinks from his sippy. Haha! It’s cute! After dinner we sang Happy Birthday and gave Kye his cake (well his second cake…) Here is a video of his cake eating. 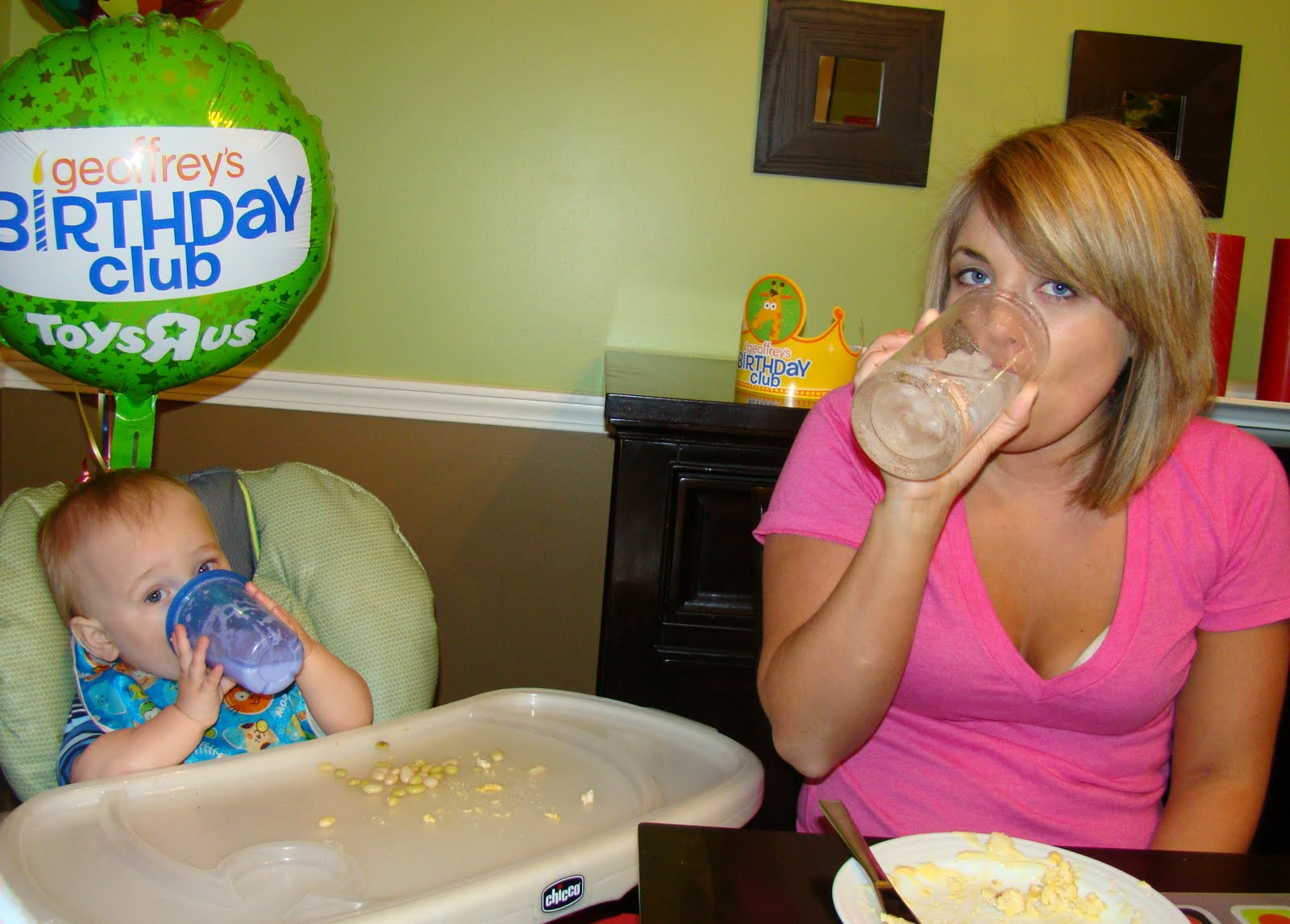 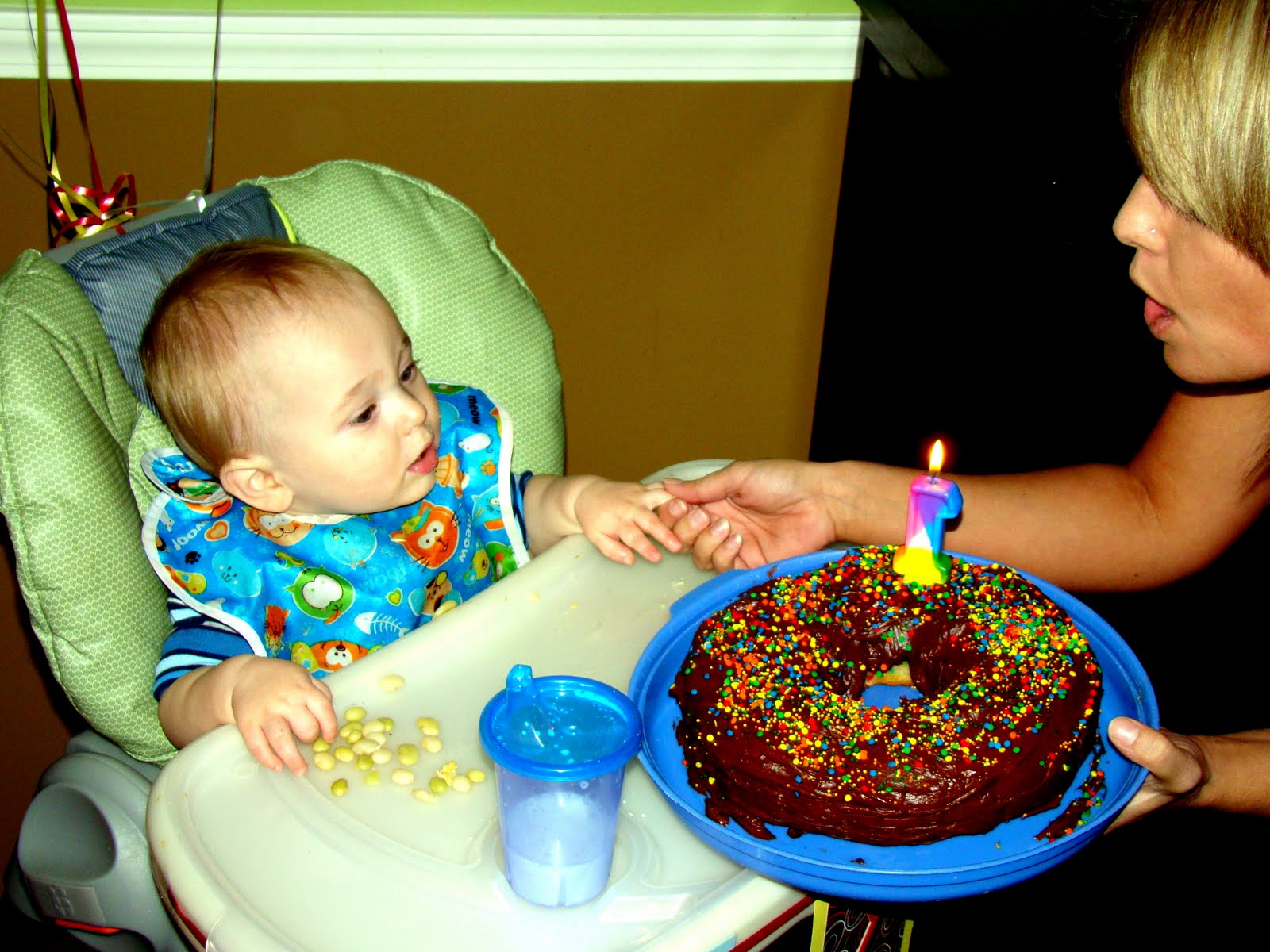 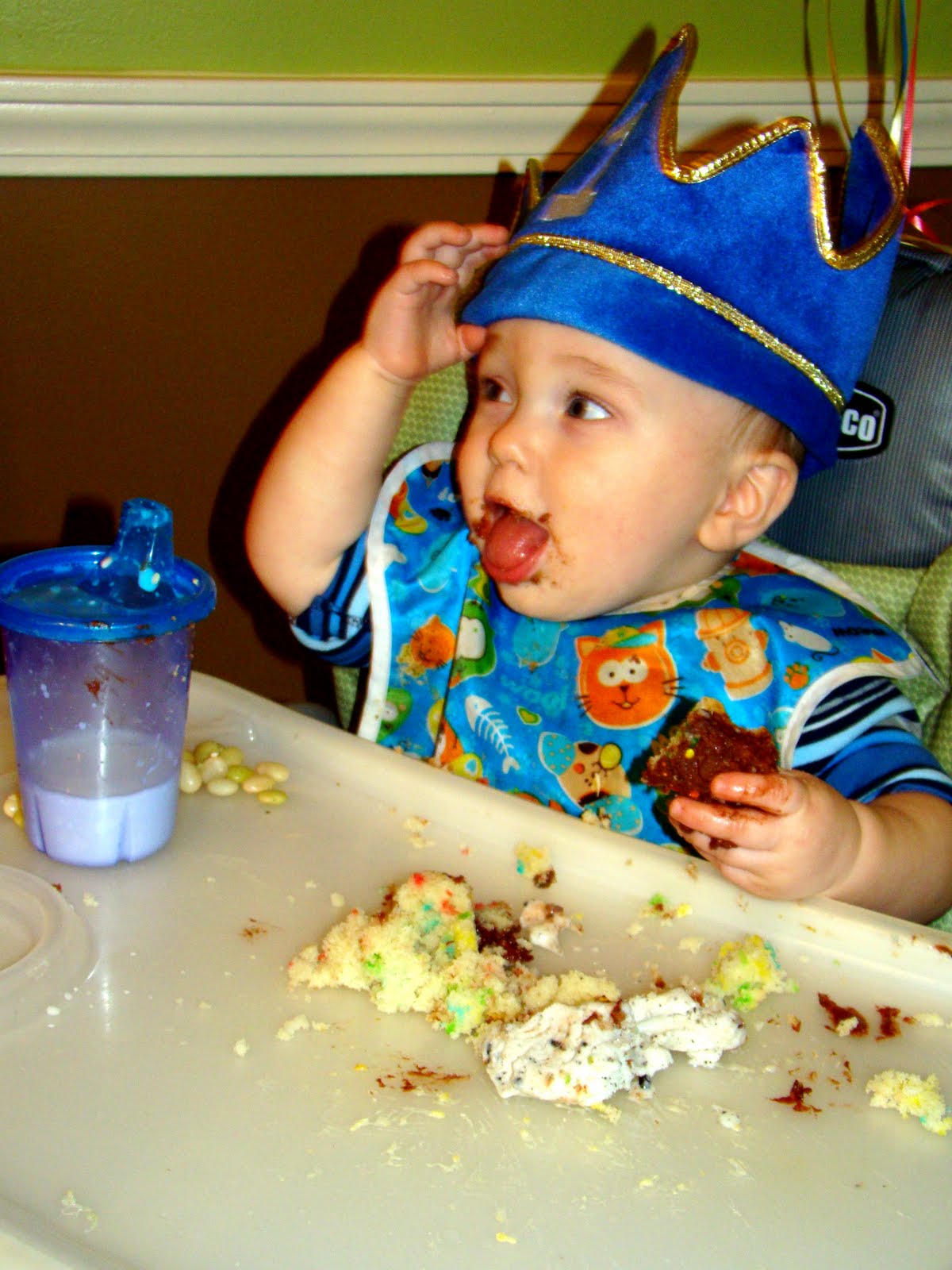 first bite of ice cream, he didn’t really like it (he MUST not be my child haha) 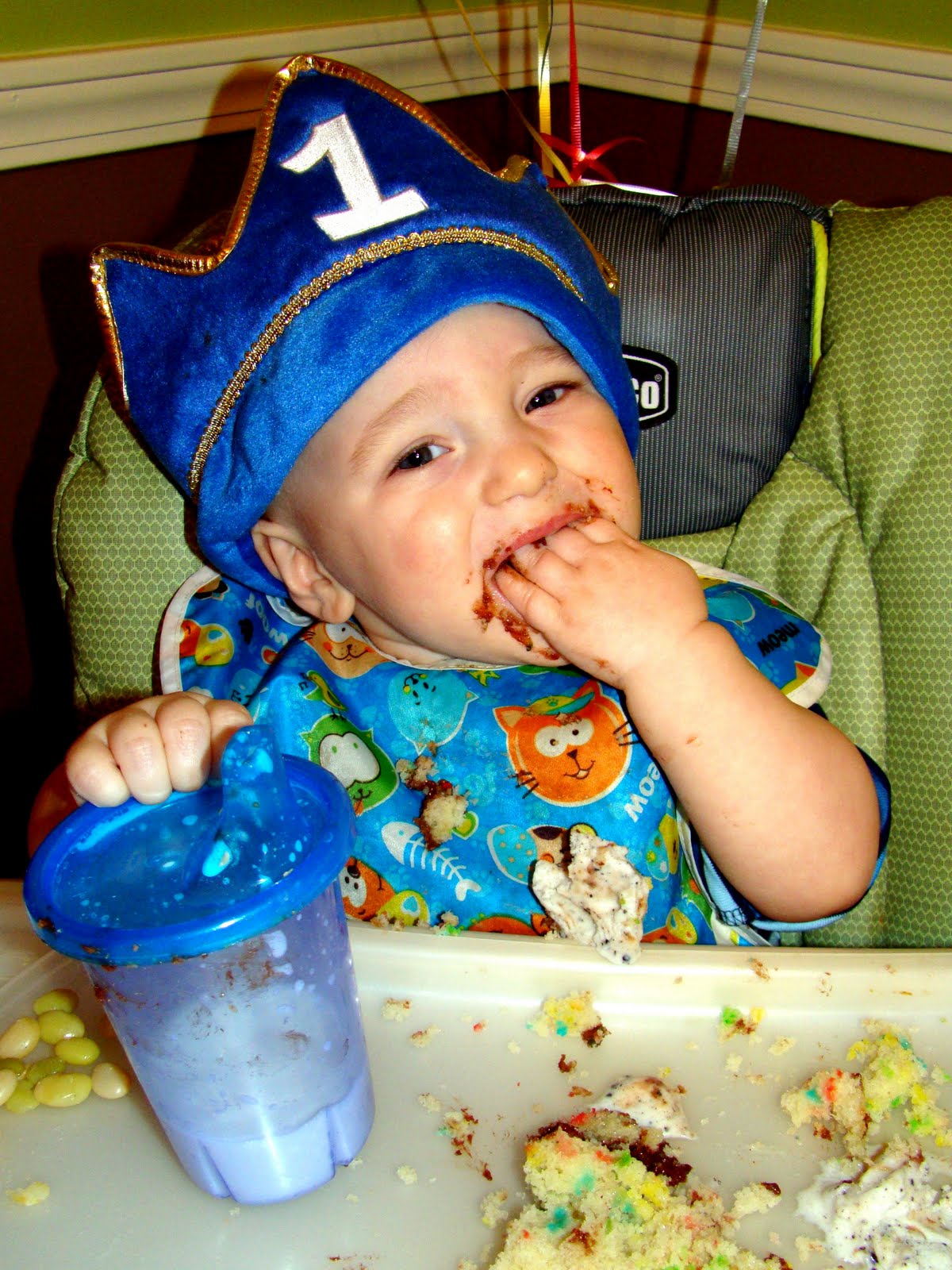 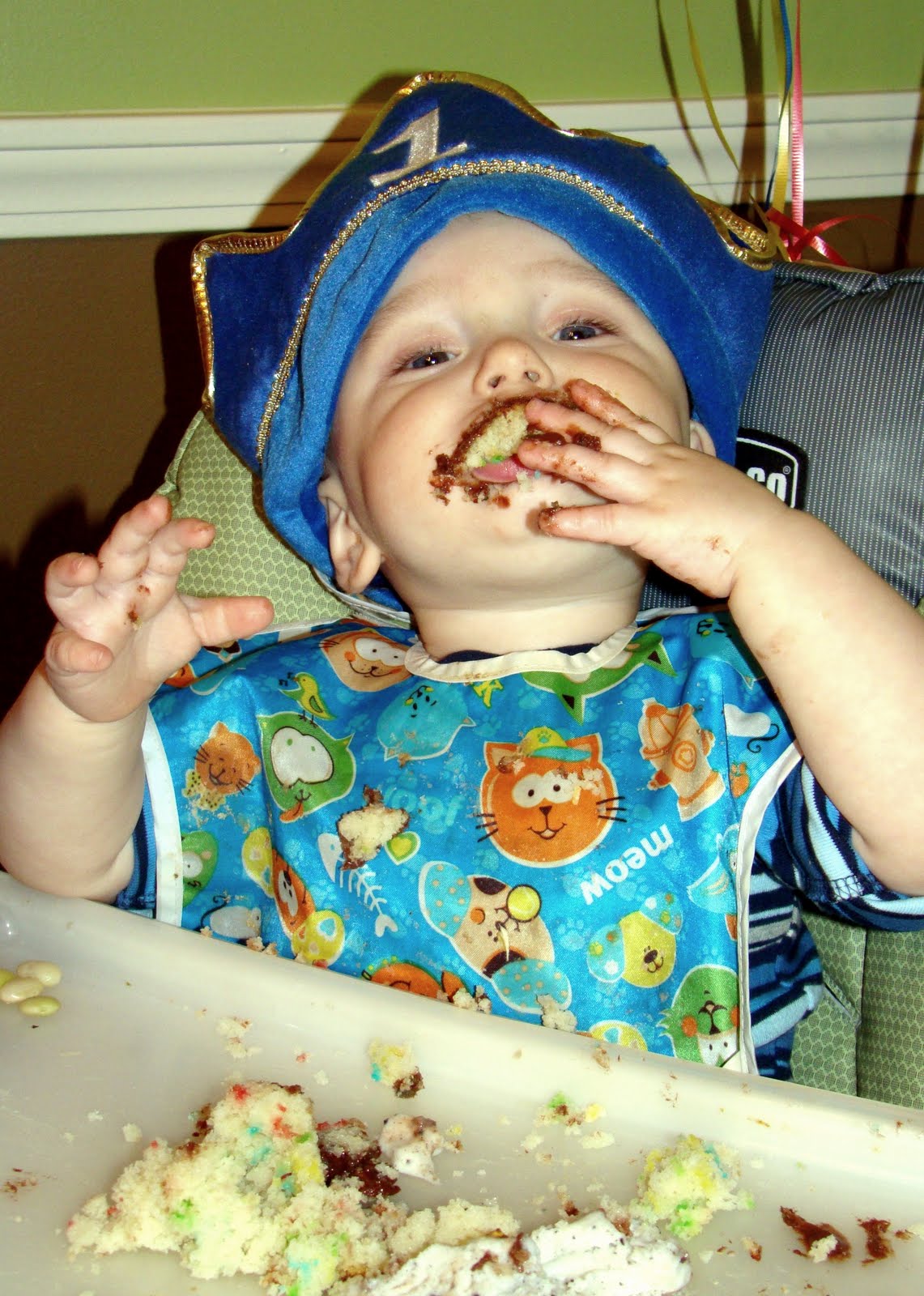 One thing I remember thinking the day Kye was born was that he was born at a GREAT time of day! When 6:55 rolled around I ran into the bathroom and sang “Happy Birthday” to him on the exact minute that he turned ONE! Here’s what he was doing when our little baby officially became a toddler 🙂 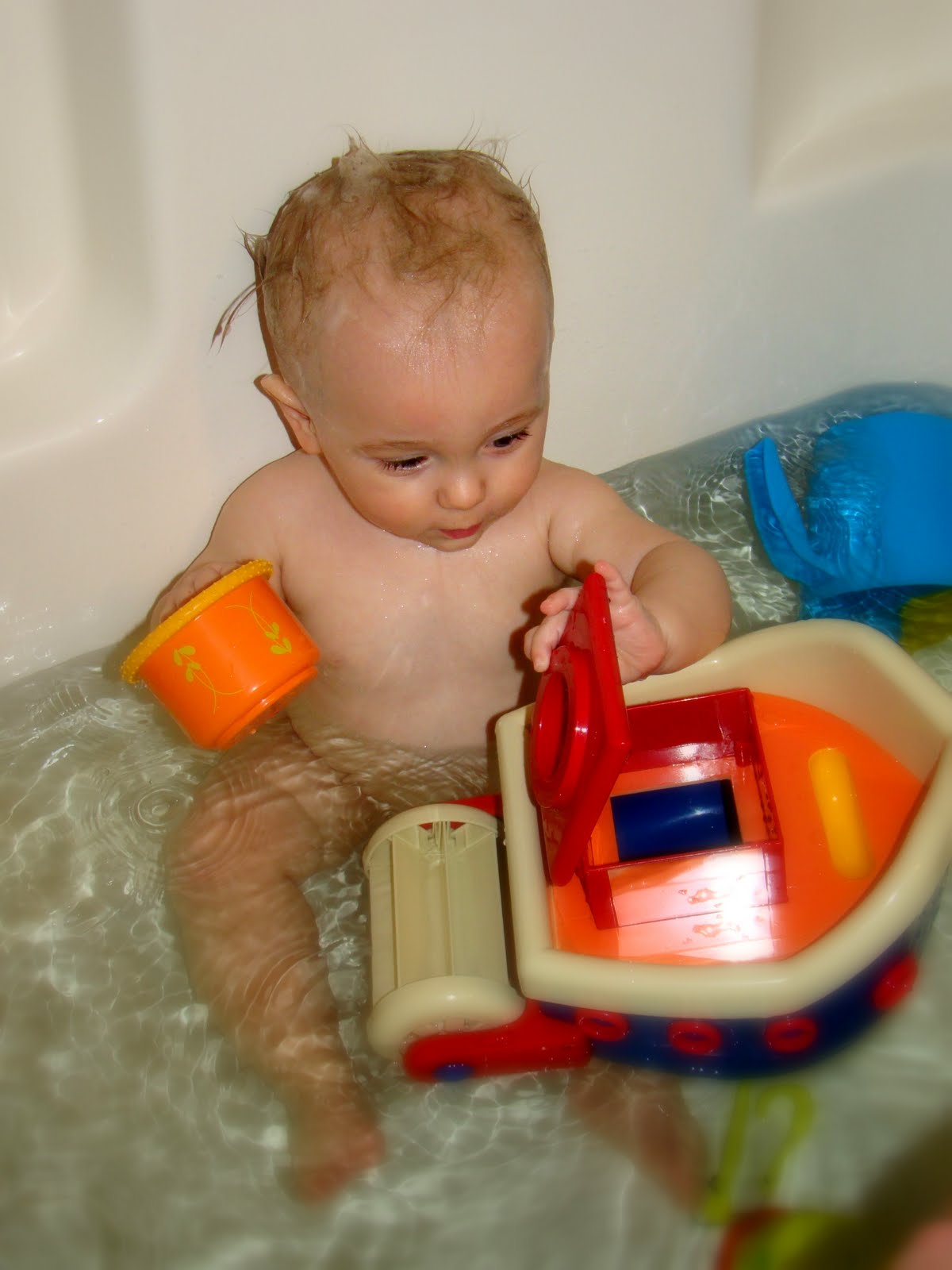 After Kye went to bed Zach and I spent the evening rushing around packing for the wedding weekend and watching Survivor. Even though his birthday was just a normal day in most respects, it was still special! I do wish we could have had his party after his real birthday as I feel like having to have it before (b/c the wedding) made his REAL day less exciting ya know? But oh well! My little boy is ONE and I’m a proud mommy 🙂