Memorial Day was never a big holiday for my family…but now it has a lot of meaning for me since two years ago Memorial Day weekend was our Wedding Weekend! While that was FOR SURE the best Memorial Day ever, we still had fun this year!

We decided that since it was a long weekend it would be a great opportunity to get the rest of my stuff that is stored at my dad’s house down there. There is a good chance he’ll be getting rid of the house and I wanted to get my stuff out of there!

We planned on Zach driving his old truck with his dad’s trailer and I was going to drive the CRV with Kye (sorry I don’t trust Zach’s truck!). Then with our financial bind and gas prices shooting up I told Zach if he’d get the truck checked out I’d allow myself and the baby to ride in it down there. Well..thank the Lord he got it checked! Turns out the breaks aren’t safe AT ALL and if we would have taken it with all the stuff on the trailer and had to slam on breaks we probably would have died! Thankfully Mr. Rusty allowed us to borrow his truck so all three of us piled in!

I planned the trip around Kye’s schedule (what don’t I plan around his schedule?) so he ate at 5:30 and we left at 6:15. We stopped in St Augustine because we got there at his next feeding time (8:30) and gave him a bottle with a little bit of play/awake time in the car. 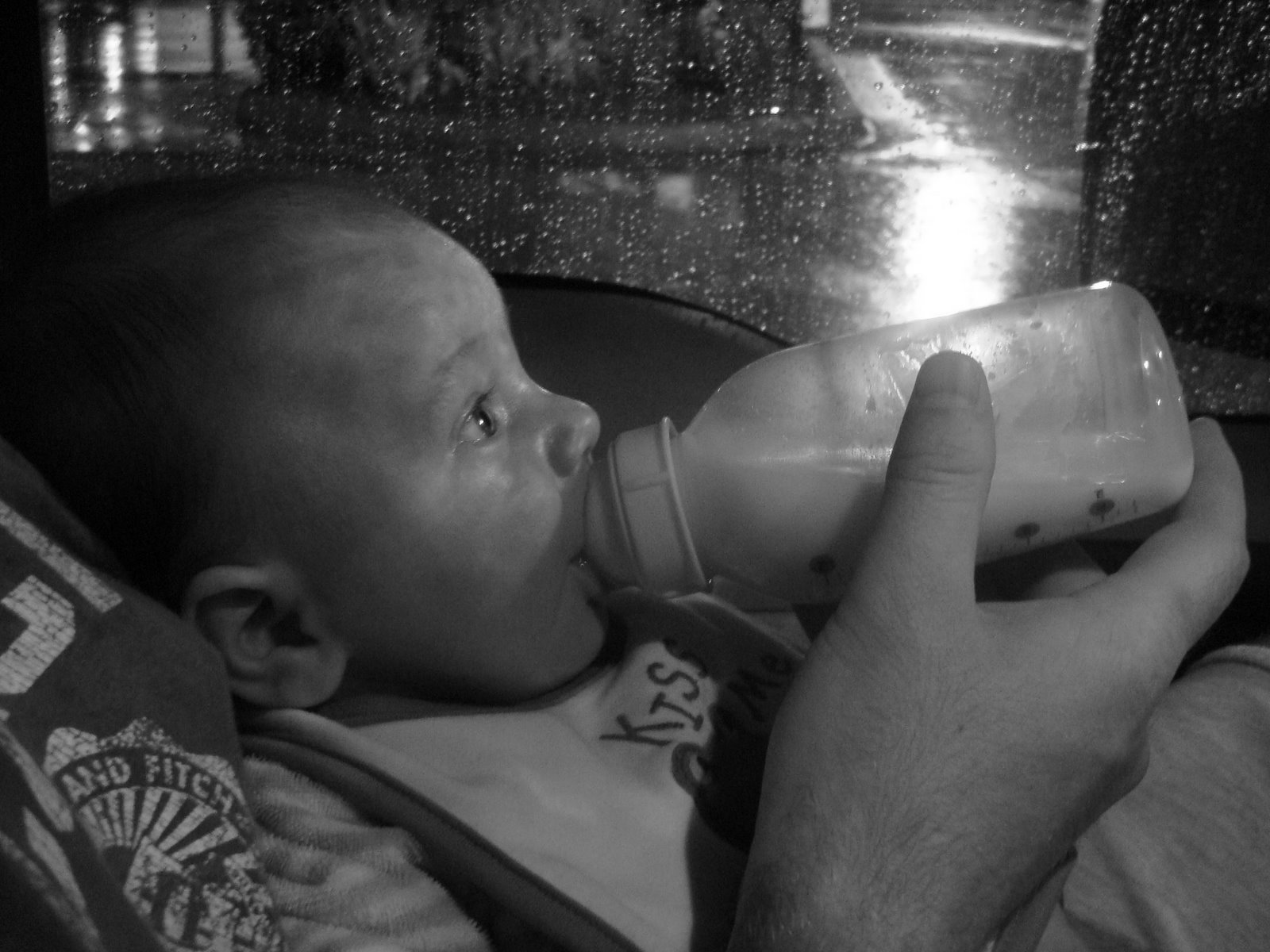 Mom was thrilled to see Kye and it was nice to be away from Valdosta! It was so sweet of Mom to load her house up with Gramma things…she got a pack and play, changing table thing, bouncer seat, play mat, and a tub! She also bought Kye a little hat that actually fits him! He loves it and looks so cute in it too! 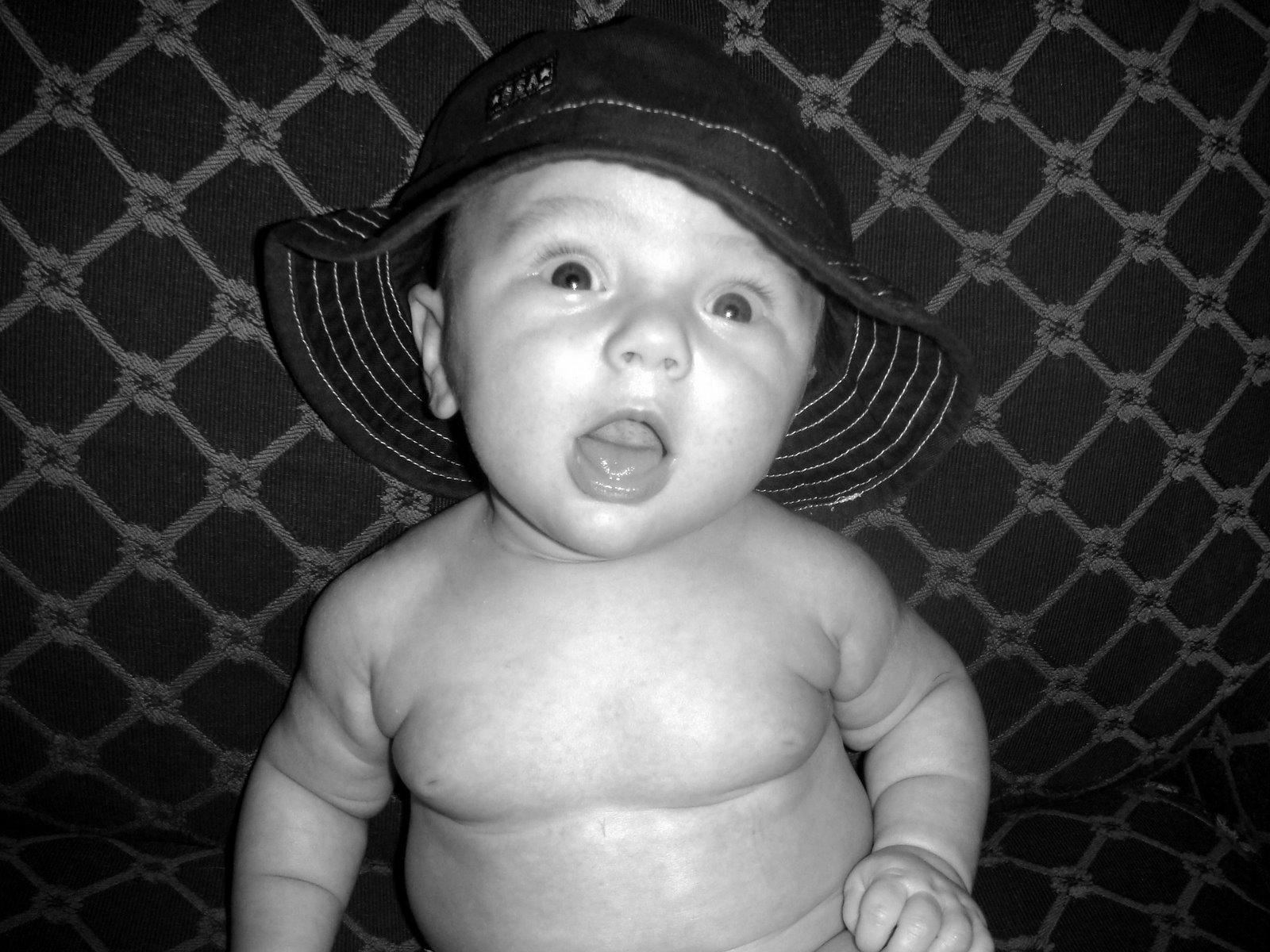 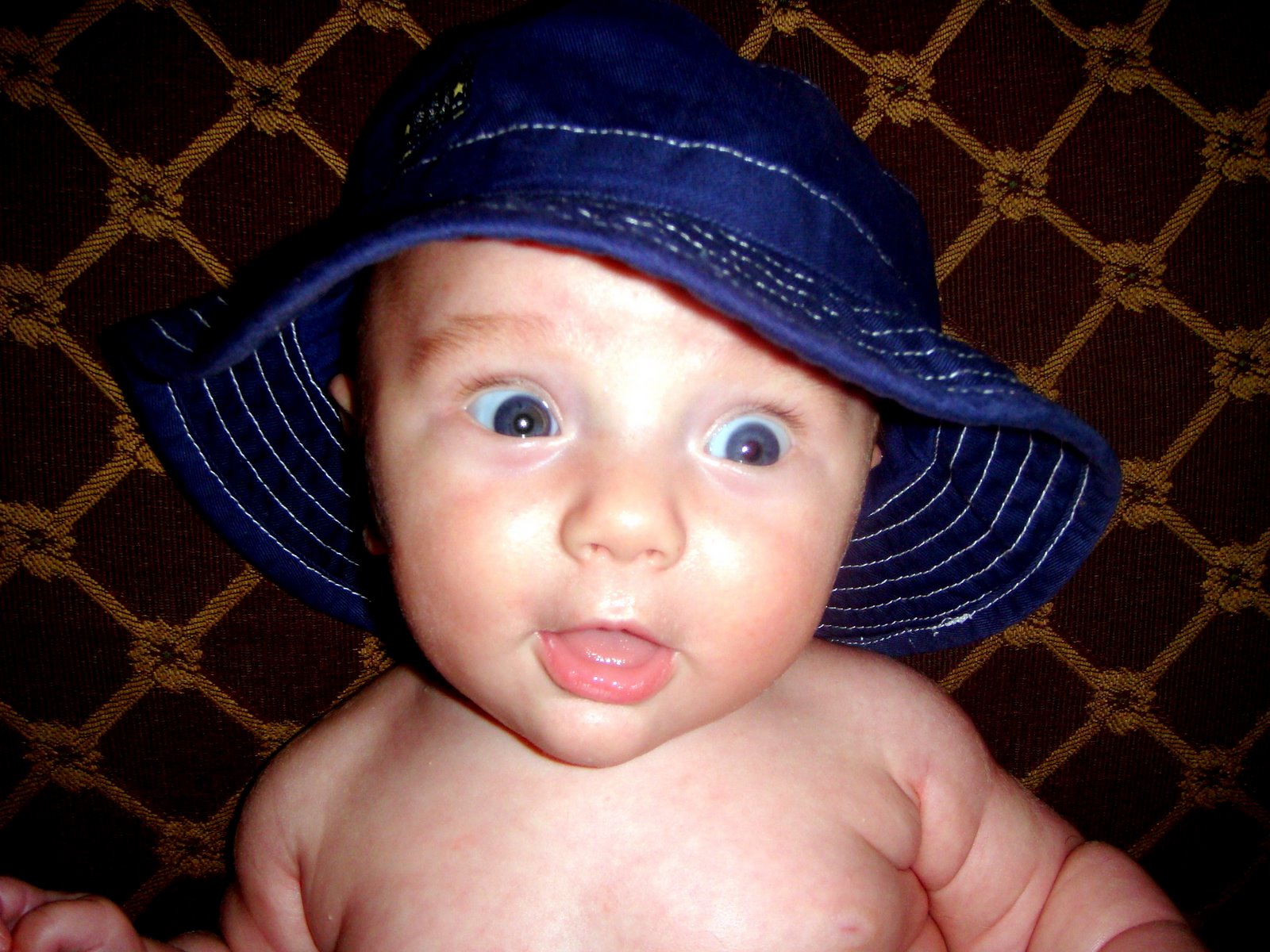 The bouncer seat thing was a great idea because he’s able to have his legs hang down which helps him with the whole stepping reflex thing! We used it so he could watch his “Your Baby Can Read” video each morning! 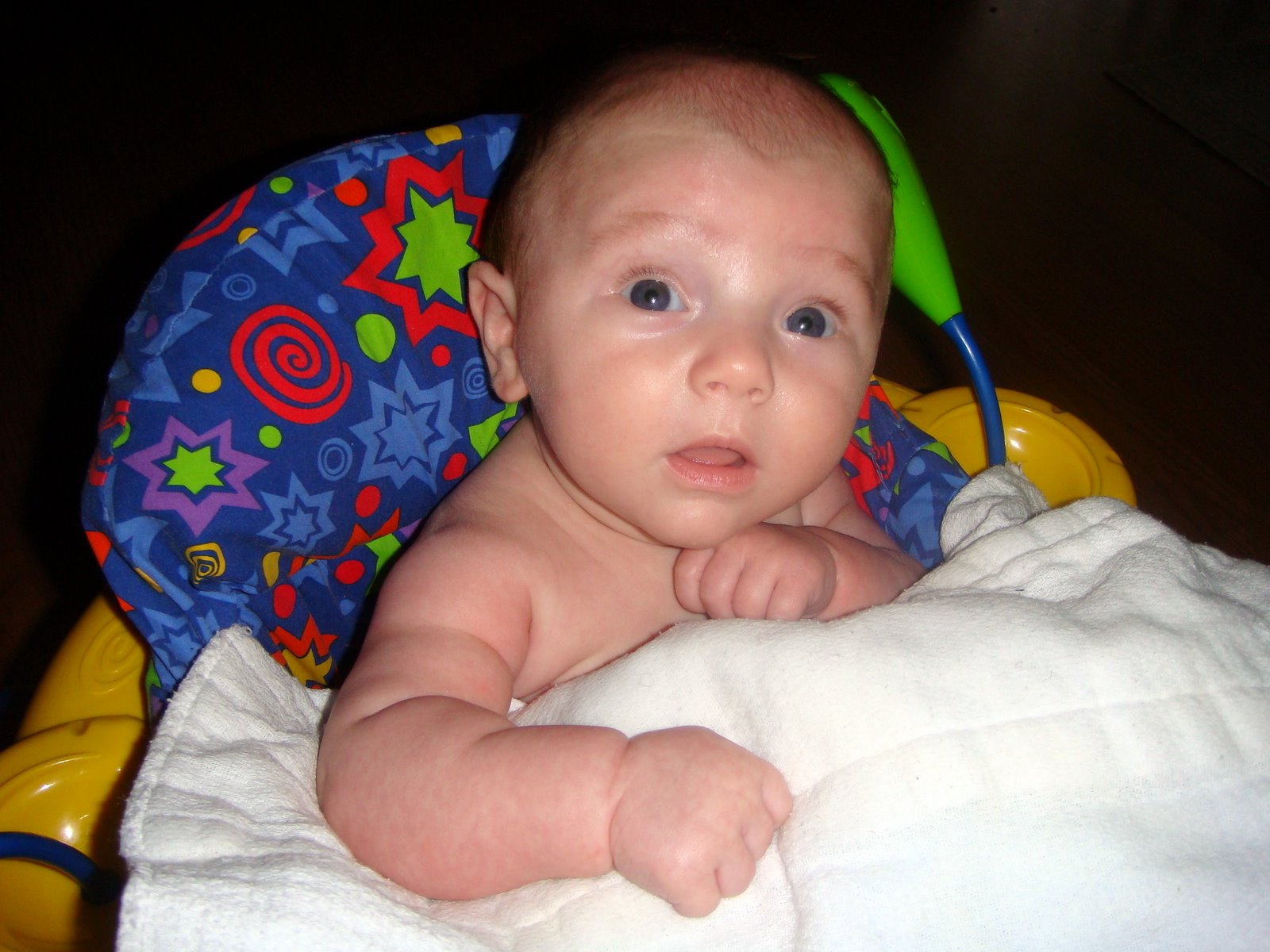 Saturday Zach and I hit up Bagel World…so so so amazingly good! Then we went to Dad’s and only took a couple hours going through all my stuff. It was mostly childhood toys and such. It was sad to throw out so much of my Barbie stuff but it just didn’t age well. I think it made it easier that we only have a boy right now because if Kye had been a girl I probably would have been a lot more likely to hold onto my girly things!

The skies cleared up so we decided to stop for the day and run home so we could take Kye to the beach for the first time! It was too many pictures to include here and it was special enough for its own post 🙂

Mom knows we’re doing Weight Watchers so she was awesome and cooked us WW friendly meals both nights! Saturday night Jonathan and Brian came over to eat with us and it was sooo soooo good to get to see them and for them to meet Kye!!!

Kye had some awesome naps while we were there which was great! But now I know what other mother’s mean when they say they found their child sleeping in a “compromisable position.” I think we might be having to say good-bye to Mr. Swaddle sometime soon… 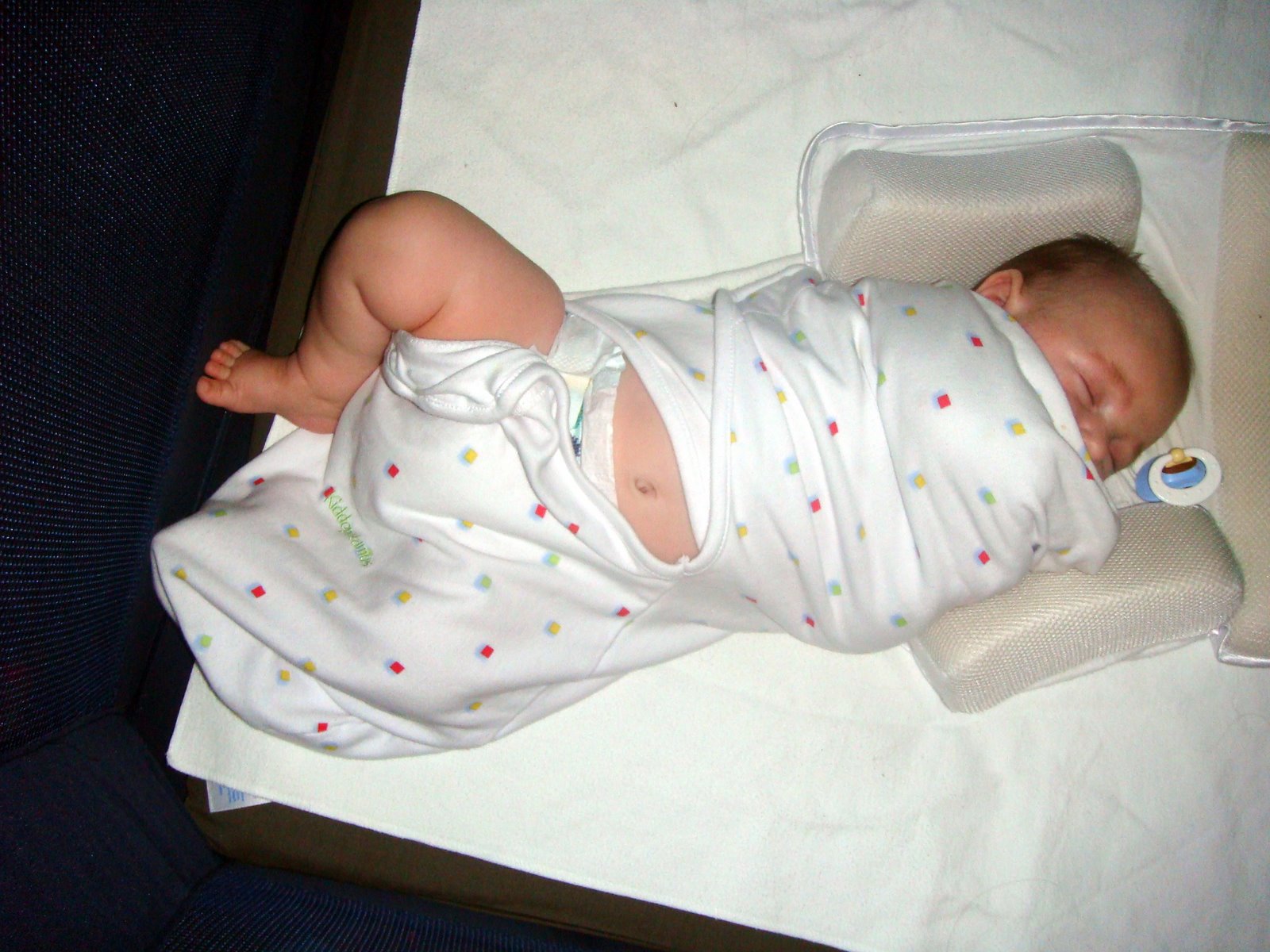 After the beach outing he was very salty, pukey, and basically just nasty! He loved his new bath! 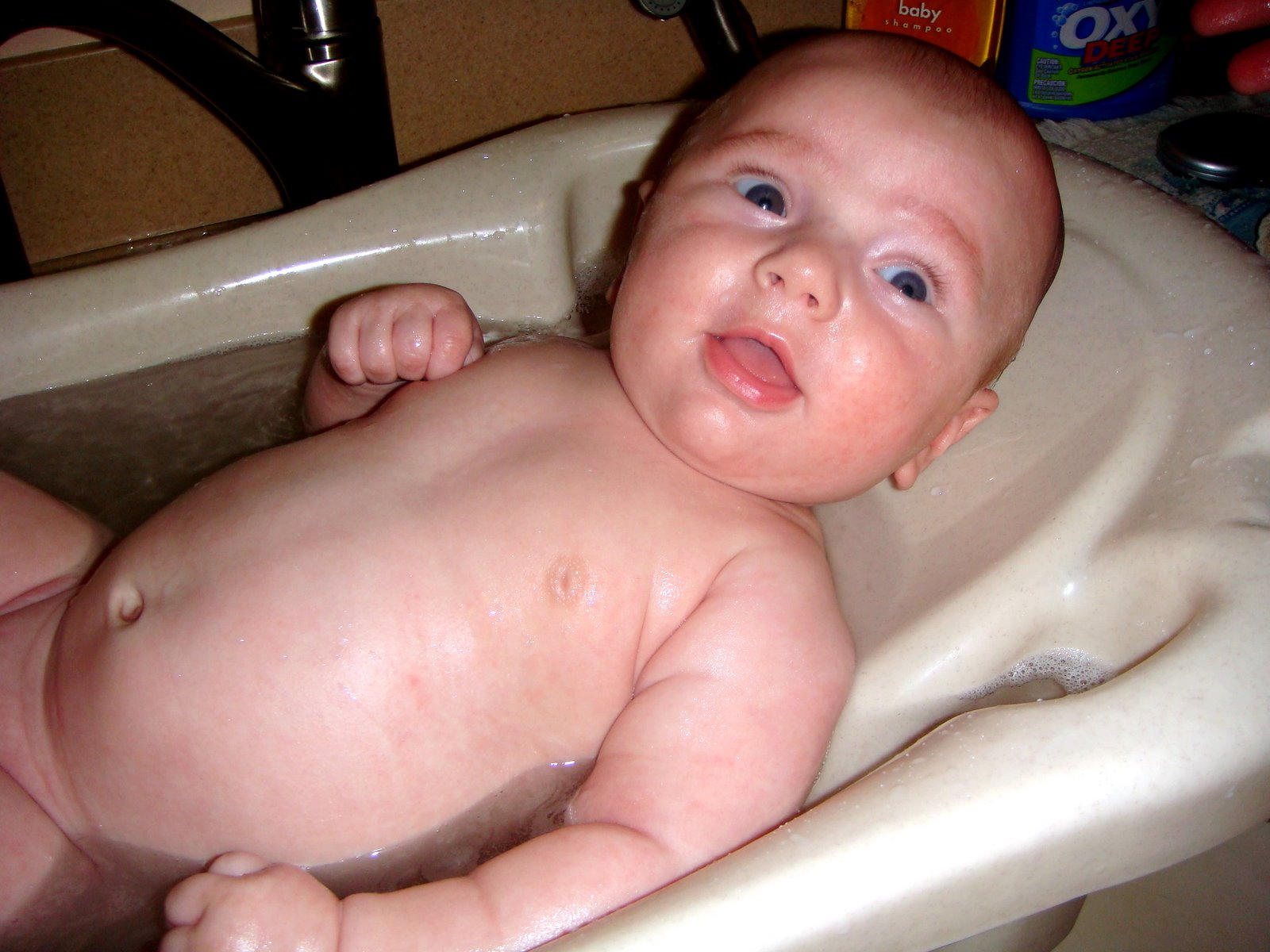 On Sunday I was very proud of Zach! Lately we’ve been slacking on going to church when we visit Melbourne because Mom and Nana get out of church earlier than we do and we typically like to meet them for breakfast but this trip Zach said as the spiritual leader of our home that we need to be putting God first and going to church. It was so nice to go! The congregation there has gotten WAY smaller (down to 18 people..no joke!) but they were all so happy to see us and meet Kye!

Afterwards Zach went back and worked on moving stuff from Dad’s and Mom and I took Kye to Nana’s. She was thrilled to see him and couldn’t believe how much he changed! Uncle Jeff and Aunt Lauri came by too and it was a nice visit. Of course Kye was grumpy for some reason which was embarrassing…but I know that will happen plenty more times in the future! Children aren’t always predictable!

Here he is with his Nana! 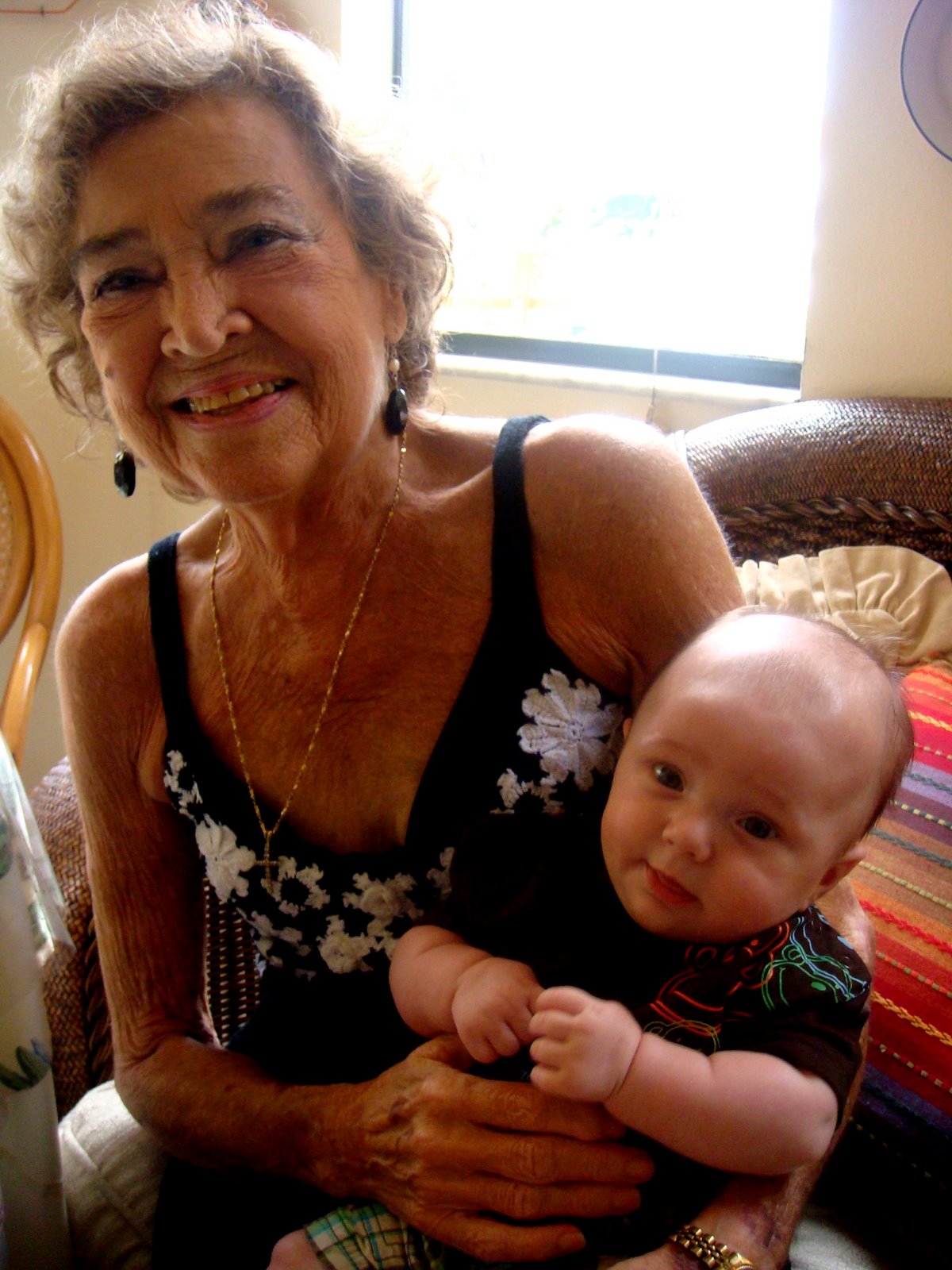 Monday morning we decided to head back pretty quickly because Courtney and Brad were having Colt’s first birthday party that night. Zach had the truck and trailer loaded up and covered in case it rained on us!!! 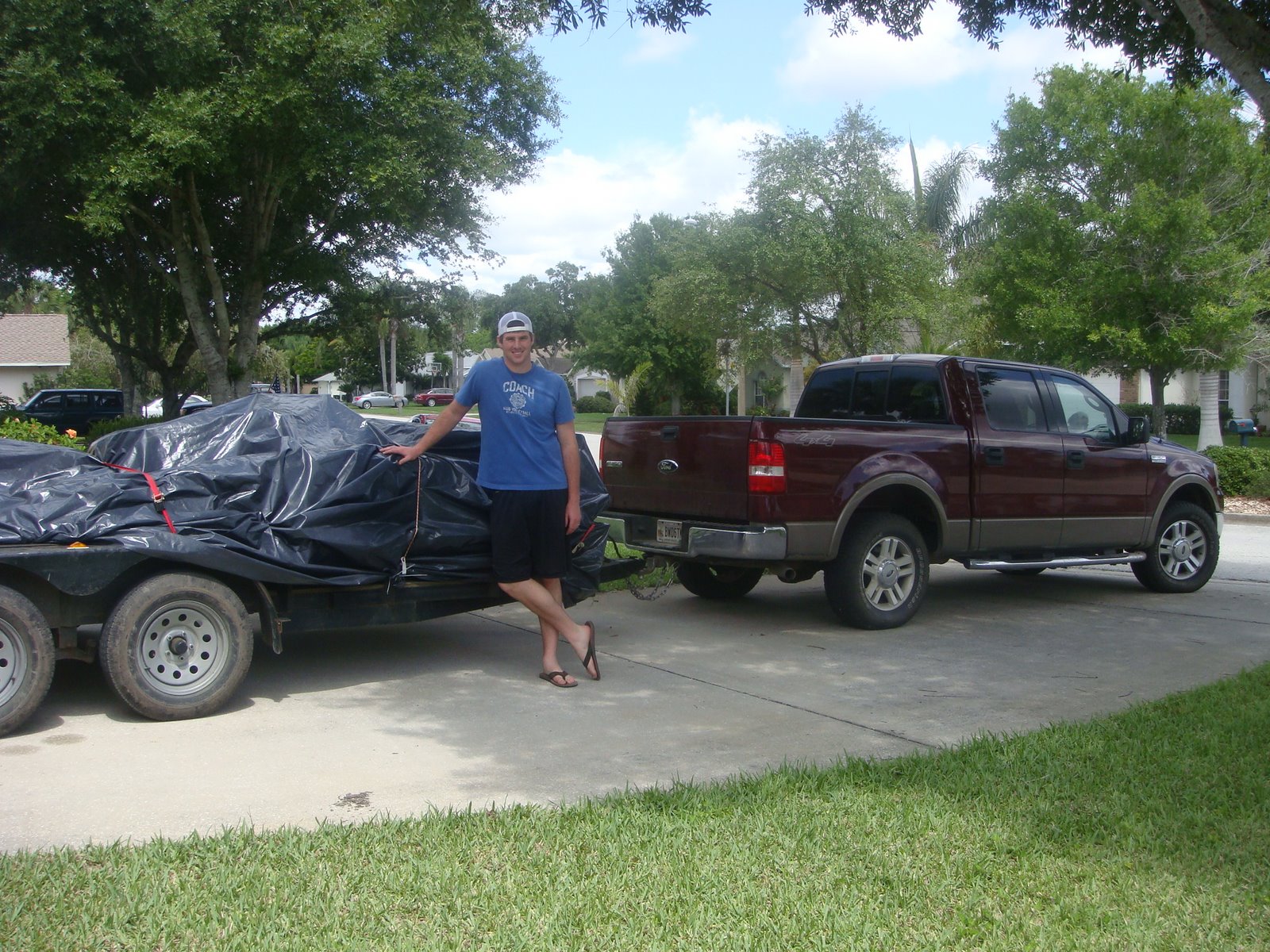 We left right after Kye’s feeding at 10:30 and hit the road. We have an AMAZING traveling child! He sleeps so peacefully in that car seat!

We had to stop pretty early on in the trip and pulled over for a good 30 min while Zach fixed the tarp. The wind was so strong that the tarp literally tore to shreds! Not good!!! But our little boy just kept on sleeping 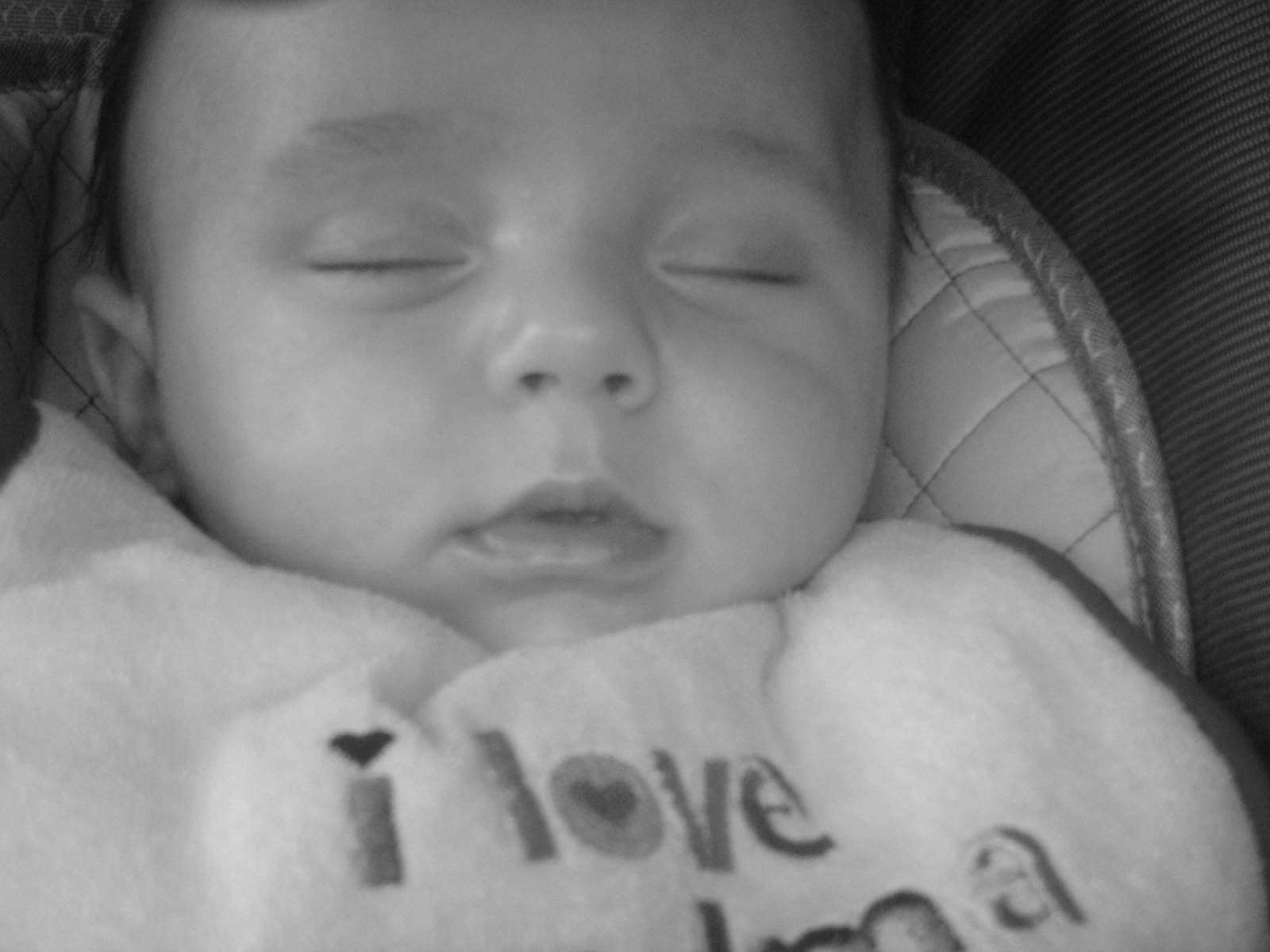 Once again in St. Augustine we stopped for his 2:00 feeding. I opted for bottles both stops this time which was way easier than having to find a spot where no one could see us so I could nurse him. Plus nursing in a car is not very comfortable!!!

After his bottle Zach worked on fixing what was left of the tarp and I had his awake time with him. I know we are very lucky with an easy baby, but I also know these days of keeping him entertained by simply smiling at him won’t last forever. He was in SUCH an adorable mood and it made it hard for me to have to put him back in the car seat! 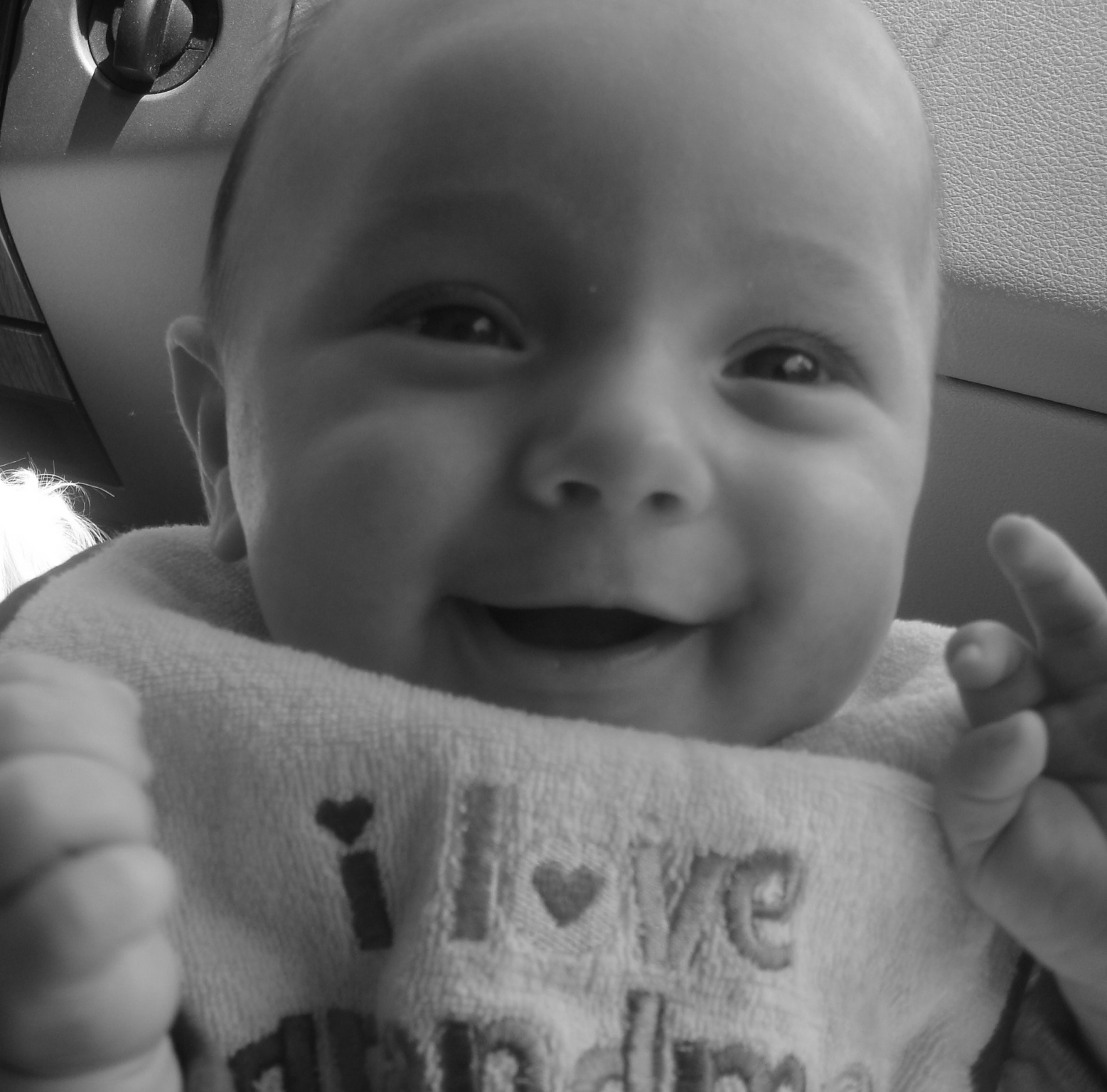 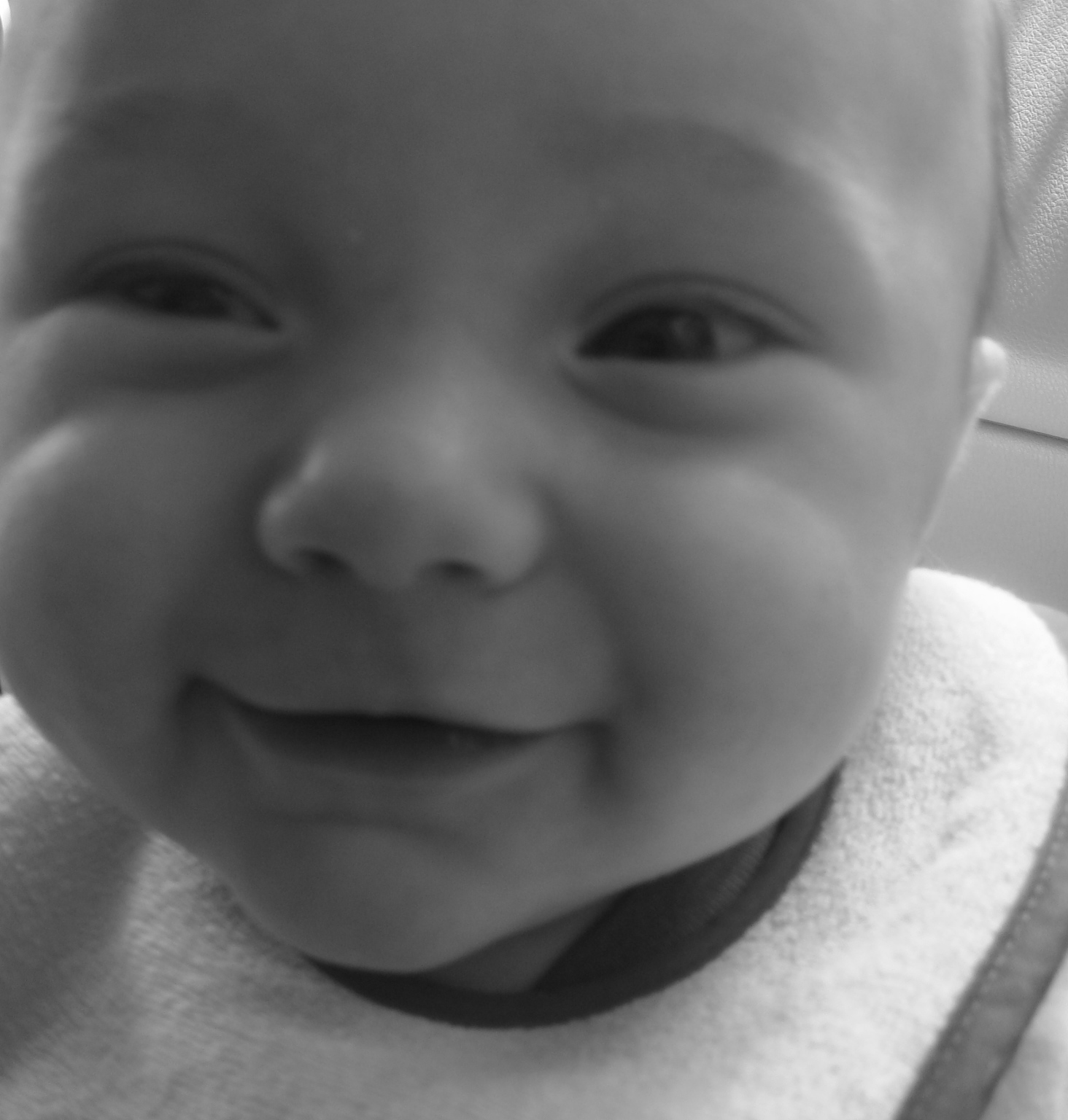 Once back in his car seat he happily played with his car seat toys then fell asleep at naptime on his own. He slept the rest of the way even when we were FOUR exits from home and got rained on! All our stuff got soaked because by this time there wasn’t any tarp left to cover it all!

Poor Zach had to rush like crazy to get to the house and pull the trailer in the garage…and tonight we’re having to go through everything and reorganize because the boxes are ruined! Yuck! 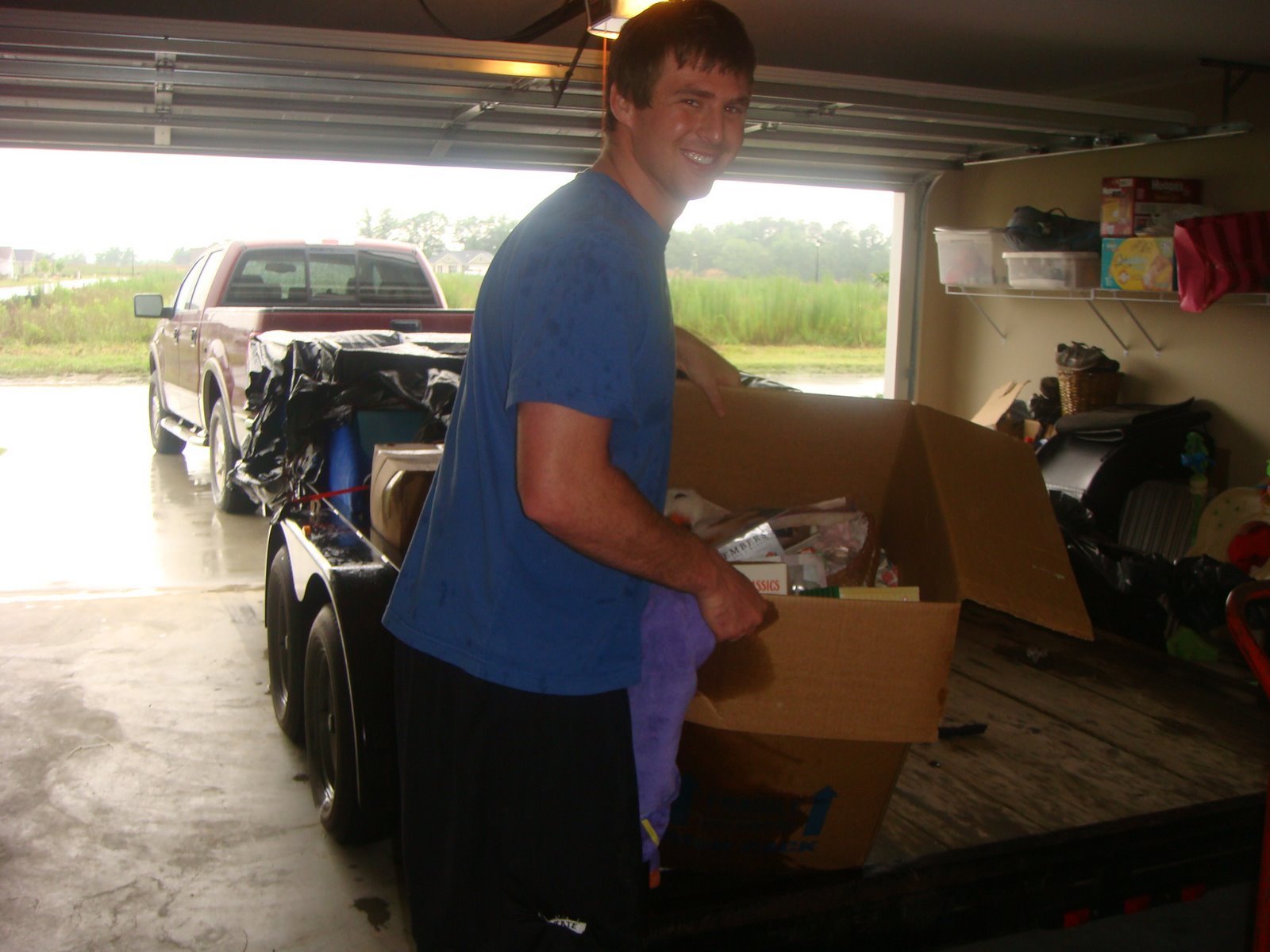 We made it home just in time for Kye’s feeding then I rushed like crazy to get both him and I ready while Zach drove out to his parent’s to drop off the truck and trailer and get my car back that we left over there. We left at 6:45 to go to Colt’s party that started at 4! Needless to say, it was waaaay over by the time we got therer but we got to visit for a little bit and eat some food so it was worth it even though we had to leave at 8 to head home because I wanted Kye to get back to his nightly routine!

A crazy busy weekend but a fun one and, most of all, a GOOD one with Mr. Kye! He handled it all great and I’m sure the next two weekends in a row that we’re traveling he’ll be just a good 🙂