Zach and I love going to Melbourne (Florida…obviously not Australia)! We love that we can hop in the car and in 4 hours have an instant cheap vacation! As soon as Kye was born we wanted to go plan a trip to Melbourne not only so he could meet Nana but also so he could get used to traveling!

We picked this past weekend to go because the month of April is PACKED for us and we didn’t want to wait to go down there until May! Really though, we probably should have tried to wait a couple of weeks. Right now he eats every 3 hours…so that means I fed him at 4, we hit the road, had to stop to feed him at 7, then got there at 9:45 so I had to feed him at 10! That is a crap load of feeding for me! We should have waited until after he was 5 weeks old because then his feedings will be spread out to 3 1/2 hours which means we’ll probably be able to make it down there without stopping to nurse plus after he’s 4 weeks old I can offer him a bottle on the trip! Duh..I’m stupid to take him when he was 3 weeks old but oh well!

He was a great traveler in the car. I know a lot of moms will think badly of me for this but I don’t sit in the back with him. For one, I get car sick. But also we decided a long time ago that a baby will add to our lives, not change our lives to revolve around it. Shouldn’t I sit up front to be more comfortable and be able to visit more with my husband? Yup…I should! We did leave a seat next to him empty just in case I needed to crawl back there but it worked out great! The dogs loved it too because they finally got me all to themselves!

Kye slept the entire way. We stopped in St. Augustine and I got fitted for another bra (and yes, I’m a 36 E now but I bought a 38 because I’d rather have a little wiggle room when my breasts are filled with milk! She said it’s a DD in regular, non-nursing bras and that after I’m done nursing my new size will probably be a D…I’ll miss my 34 Cs but I don’t think Zach will! haha). Then we pulled in behind a dumpster and I fed him…my first time nursing not at home! It went pretty well even though it took like an hour off our travel time he still got a good feeding in! He slept the rest of the way and then was WIDE awake when we got there. NOT GOOD 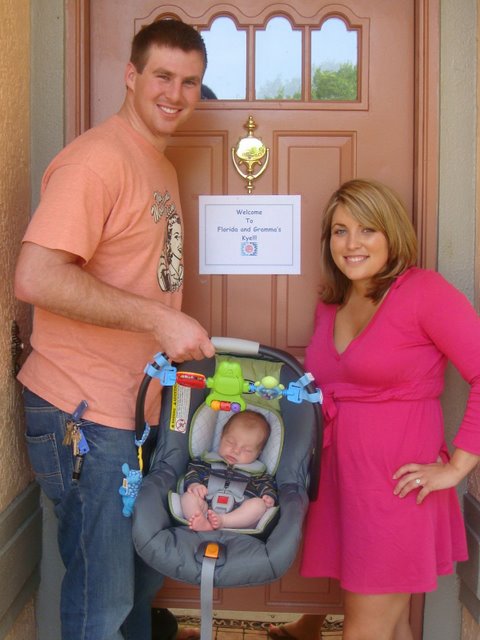 Mom was thrilled to see him and couldn’t believe how much he’s changed in just two weeks! He’s got some chubby little cheeks now haha! 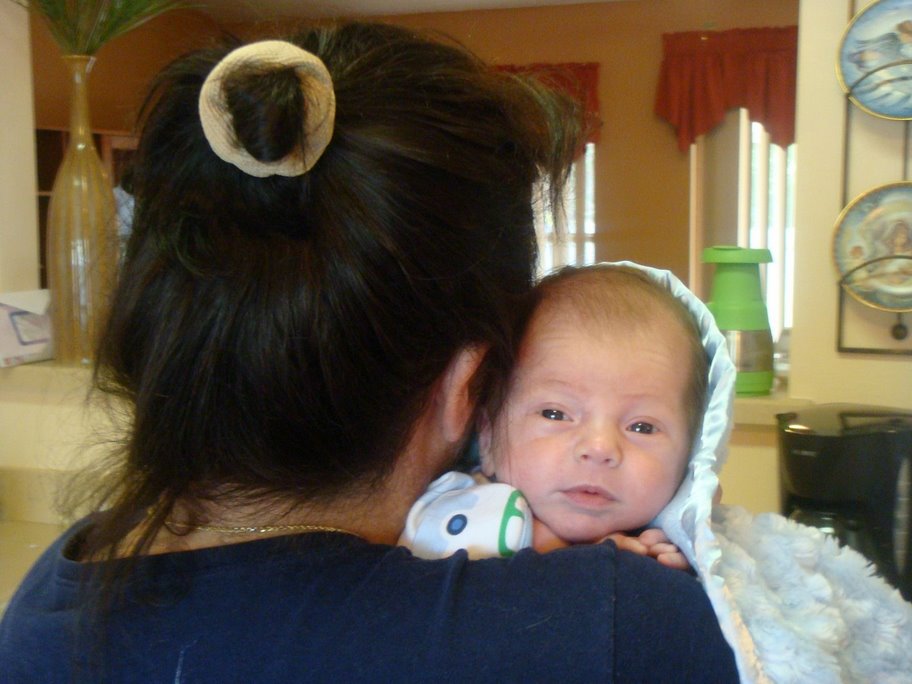 We usually put him to bed around 9. He didn’t go to bed until after 11. It was his first time not sleeping at home, going to bed that late, and sleeping in his pack and play for the night. Needless to say, it was AWFUL. Zach and I literally got 3 hours of broken sleep!!! Worst night I think we’ve ever had sleep wise because even the first night with him home we got more sleep than that!

Saturday we somehow managed to still be alive! Zach got me Bagel World (so amazingly yummy) and Uncle Jeff, Aunt Lauri, and Sabrina stopped by to meet Kye! They were so sweet! Uncle Jeff got tears in his eyes (like always..those Bublitz men are emotional) and they even brought us an adorable outfit and little blue rattle! We really want a family like theirs as they have 2 boys and 2 girls and spread out their ages. They are a great family and it meant a lot to me that they stopped by! 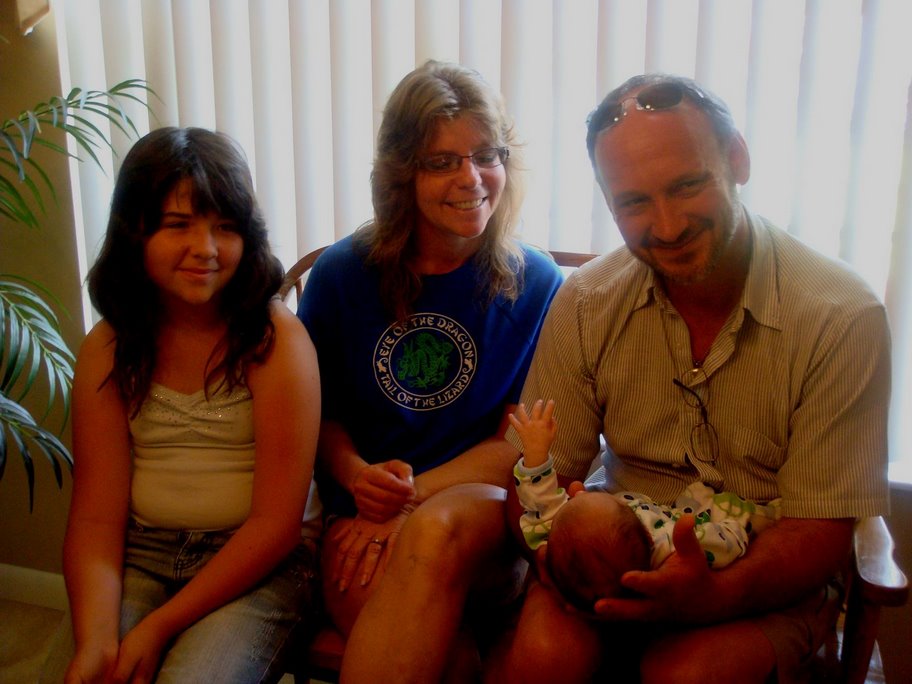 After lunch we went over to Nana’s house. We decided to visit her there so she could have lots of time with her new great-grandson! Aunt Becky and Lonnie were nice enough to come over too! It was a really special time! Aunt Becky and Lonnie bought Kye a little rabbit (it’s going in his Easter basket though haha) and Nana gave us an AWESOME wooden rocker for him! We don’t have a place for it right now so Mom is keeping it at her house but I love it! 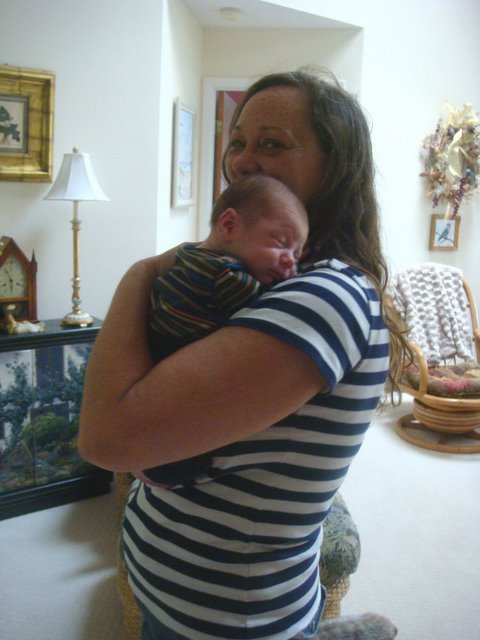 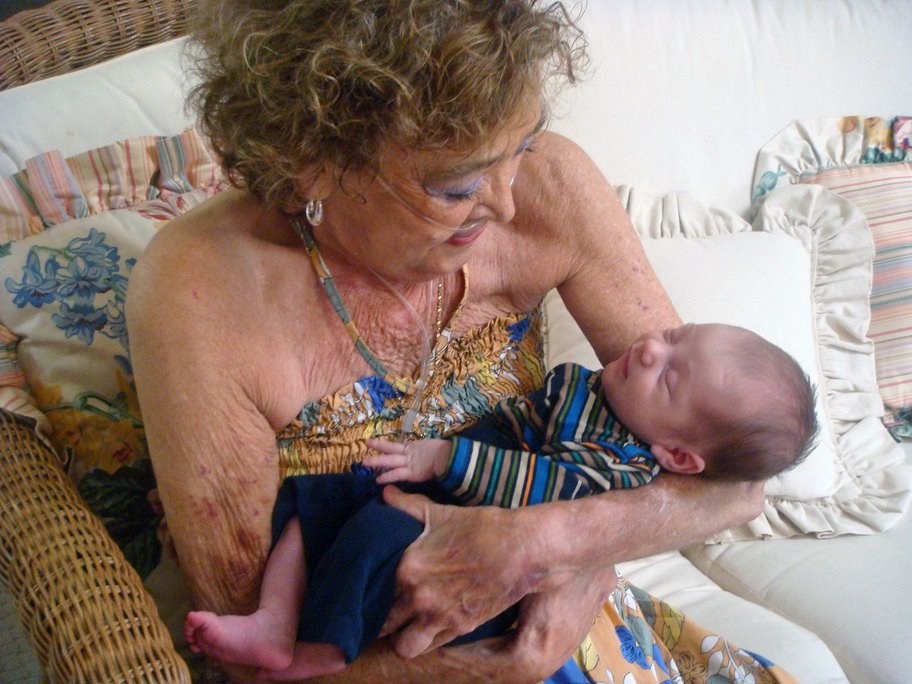 Seeing Nana hold him was really precious to me. She just loved on him and kept putting his feet at his mouth which was cute. Of course he didn’t sleep all night so he pretty much slept the whole time we were there but it was nice and relaxing and gave us all a chance to catch up too! 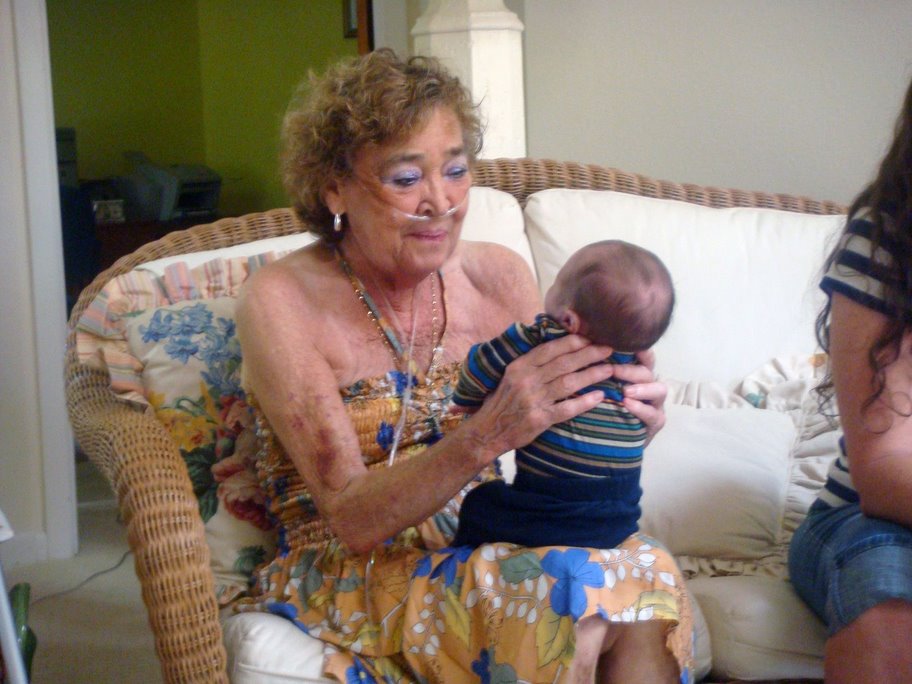 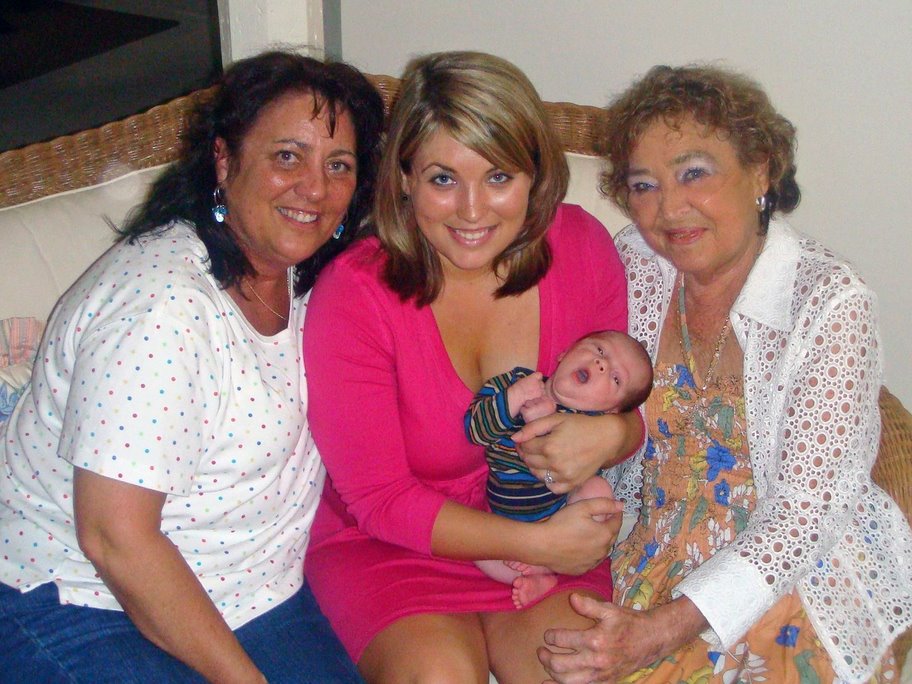 After Nana’s Mom babysat Kye and Zach and I ran to Dad’s house. Dad has moved and will be getting rid of his house so we have to get allllll my stuff out of the two storage units he has there. We got started but plan to take our truck and my suv down next time to get it all! if Kye had been a girl he would have had enough Barbies for him and allll his friends! I’m still saving them for when we DO have a girl though! While a lot of the Barbie stuff didn’t hold the test of time (the houses and the furniture got REALLY discolored but all the actual dolls were still in GREAT shape) all my Little Tikes stuff (a doll house and baby carriage) still looked brand new! Zach and I are planning to buy Kye and all the future children lots of Little Tikes things! They have a VERY fitting slogan haha 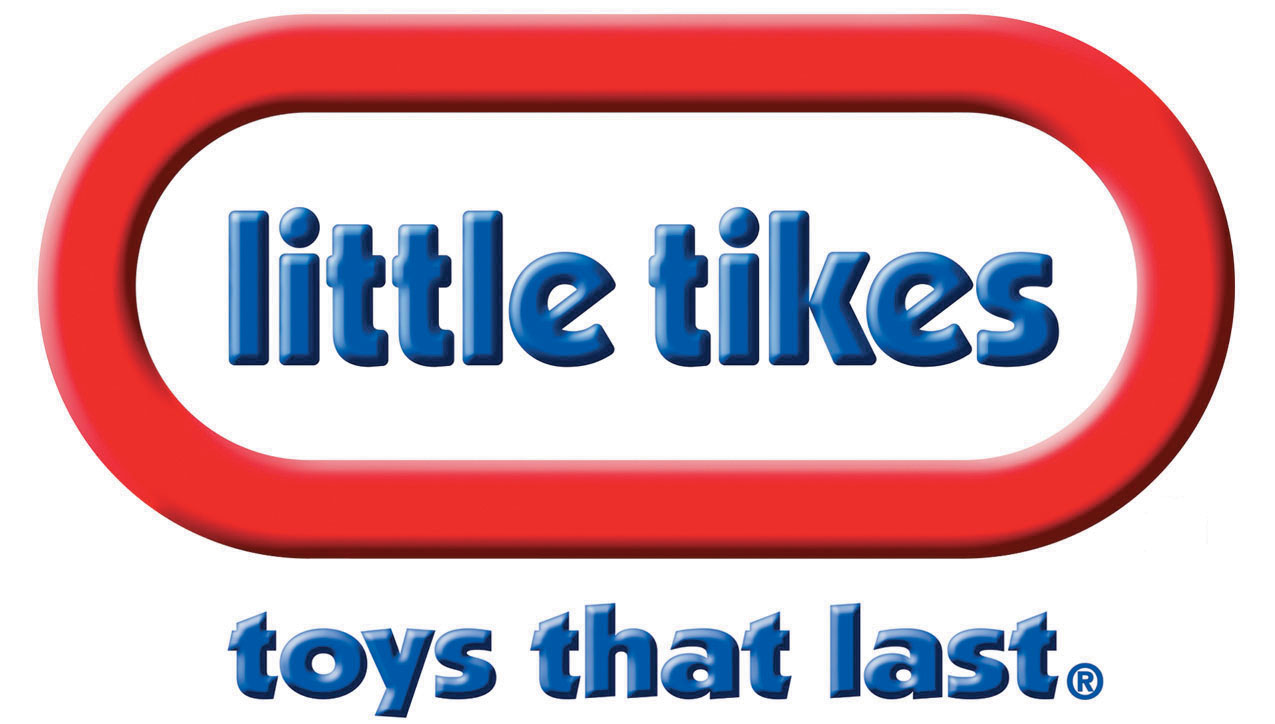 It was nice just relaxing at Mom’s. It gave me a great break because she kept him and I could just relax! He did get his first bad diaper rash though 🙁 I know SO many people warned me about Huggies wipes…I didn’t buy any for my house but someone got some for Mom so I figured we’d just try them because if we never try we won’t know if they do mess him up or not! So we tried them and OMG…his little butt is so so so raw. We all felt so sorry for him and vowed NO MORE HUGGIES!!! 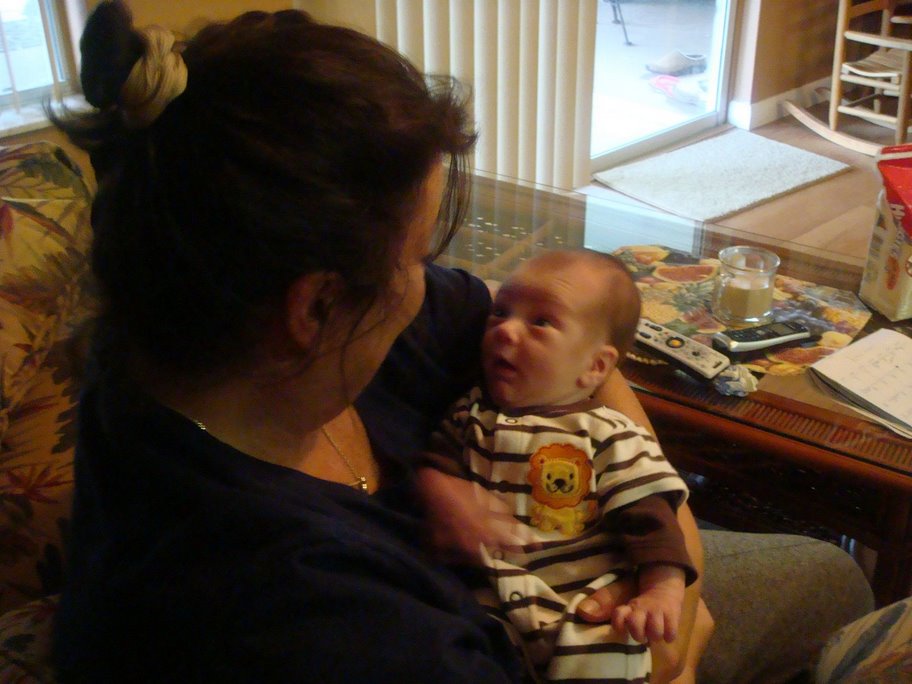 So sad about his diaper rash 🙁 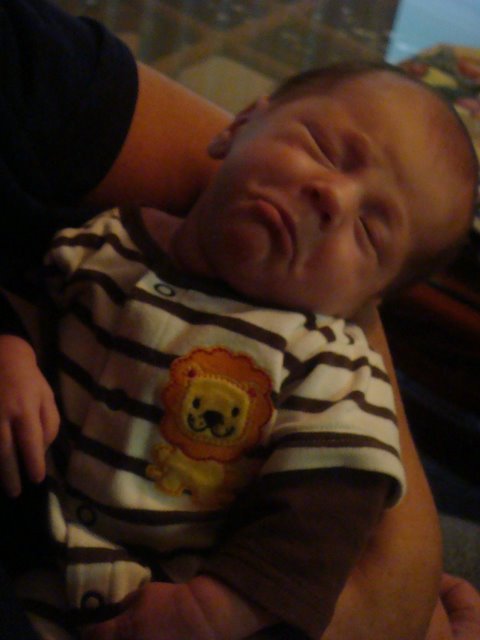 He slept so much better Saturday night, thank the Lord. We were more planned out when we left on Sunday and I fed him and we walked out the door RIGHT after. We stopped at a random gas station and I fed him but we got home with plenty of time before his next feeding so I was able to shower and get all the stuff put away! Speaking of unpacking…I was proud of myself for how well I did packing for Kye for the weekend! Remember when you pack for a baby..bring TONS of clothes! He spit up on so many things I was thankful that I “over packed” on the clothes. I also packed 25 diapers and had 6 left over so I did well with that too!

While we probably should have waited awhile before we went down there I’m glad we made the trip, got to see my family, and got Kye used to his future life of lots and lots of traveling!