I am so, so thankful that we attended this event! It was really the only pre-Christmas theme thing we were able to do this year. I really do like this little gathering and think it’s something we’ll continue to do every year!!! Our town is very small and has a Christmas Tree Lighting Ceremony downtown in front of the courthouse each year. Some children sing and the mayor gives a speech, it’s LEGIT “small town” feeling and it’s kinda awesome 🙂 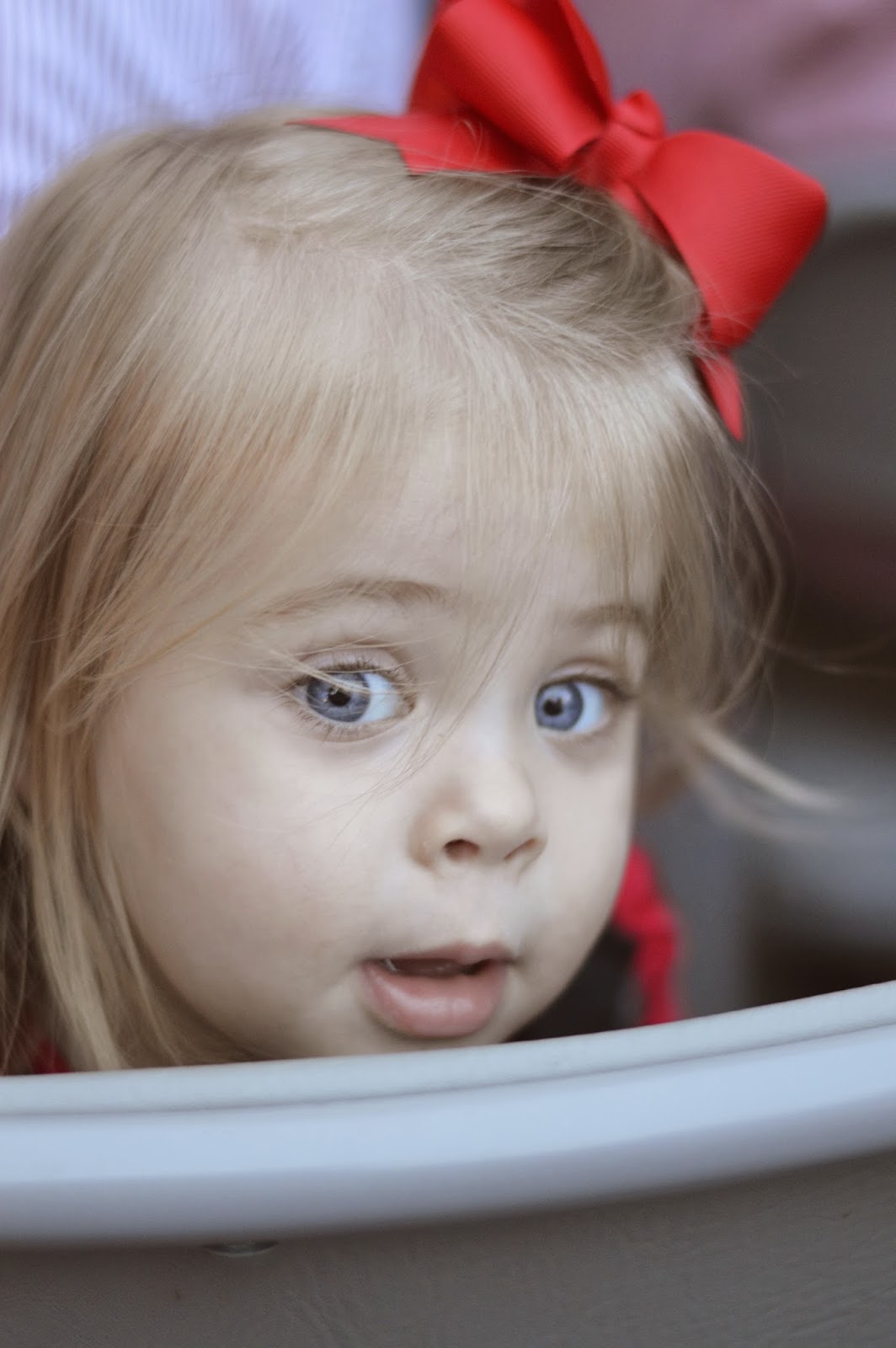 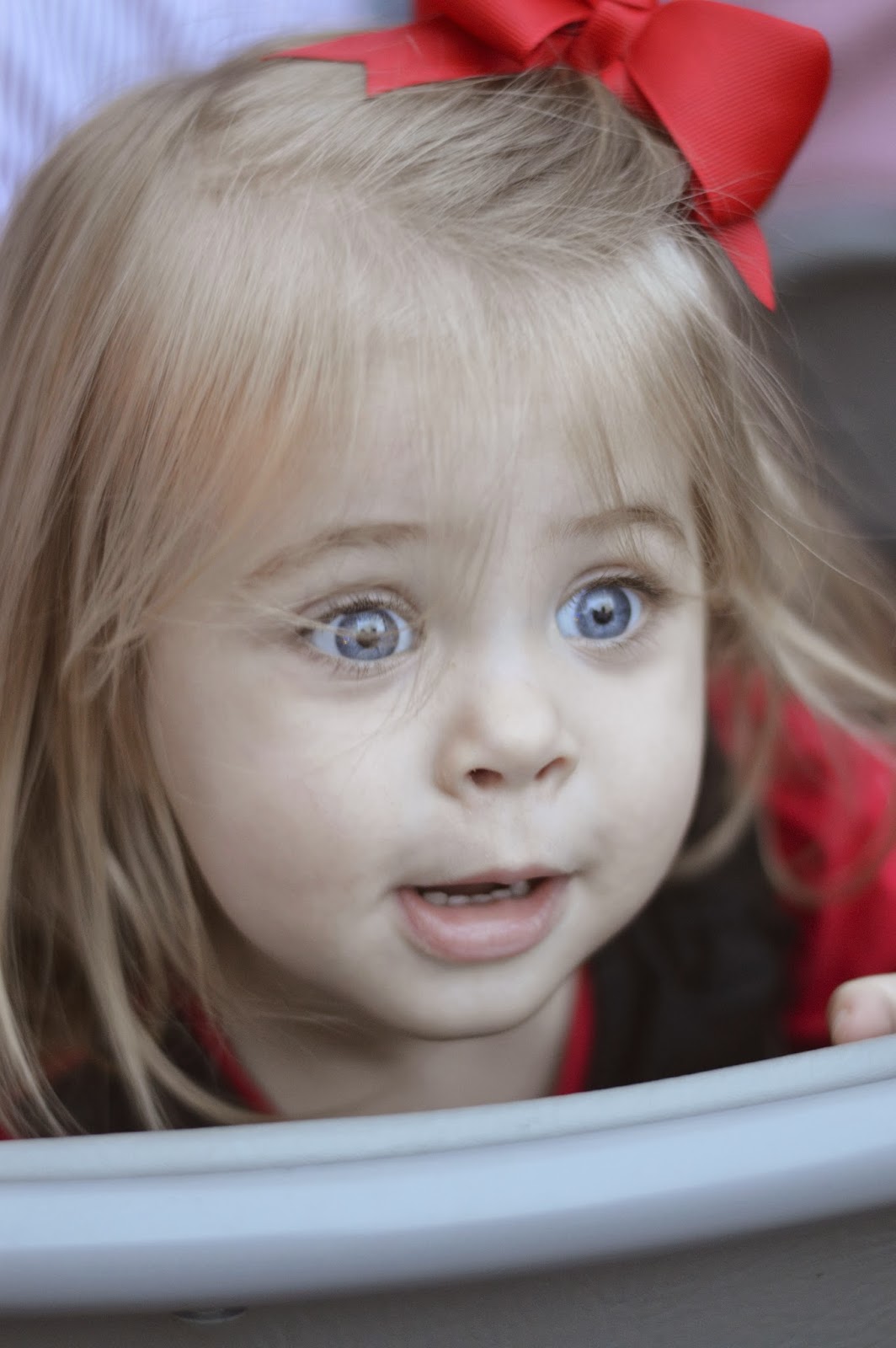 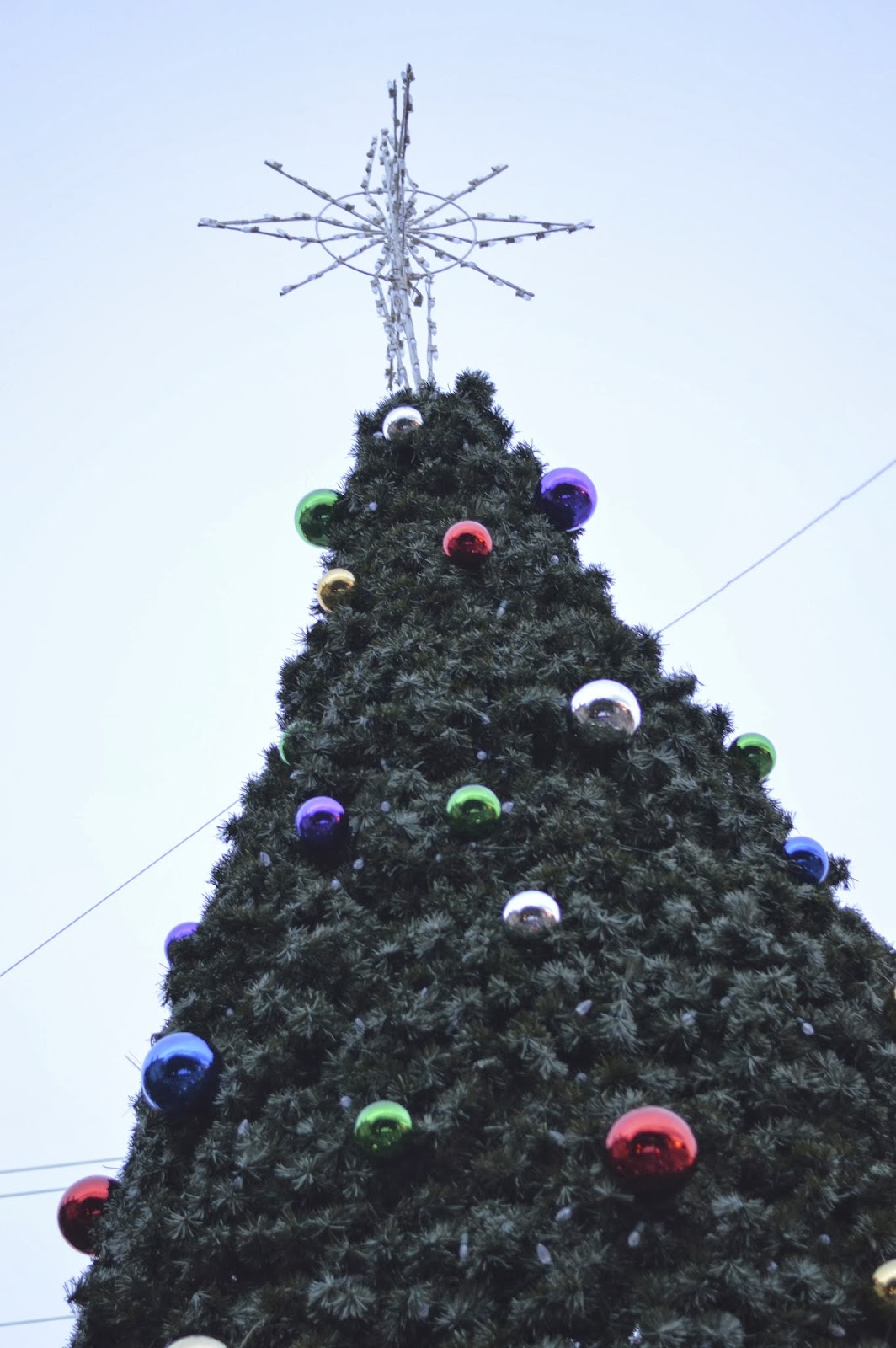 Mayor and Santa ready to make the tree legit! 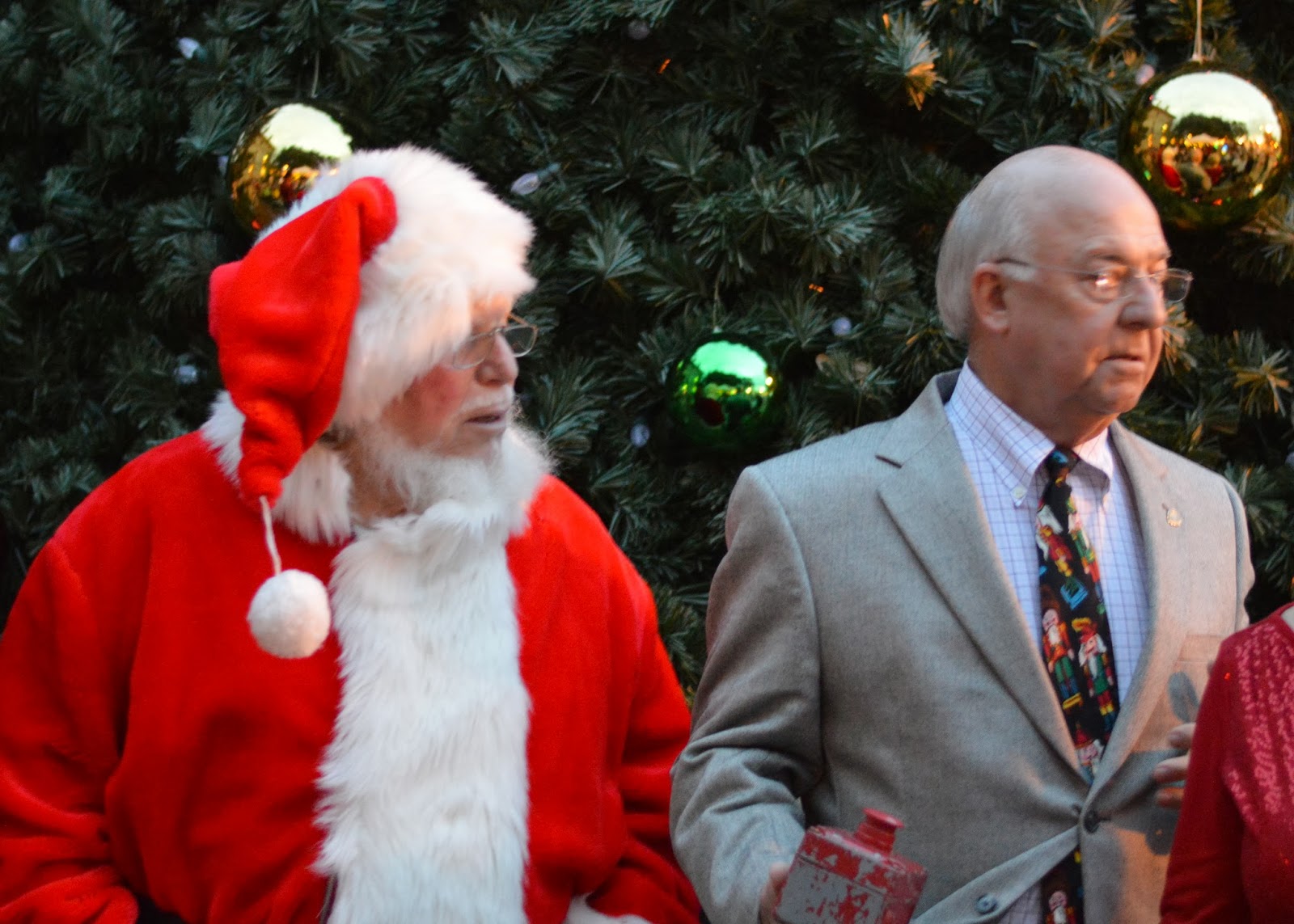 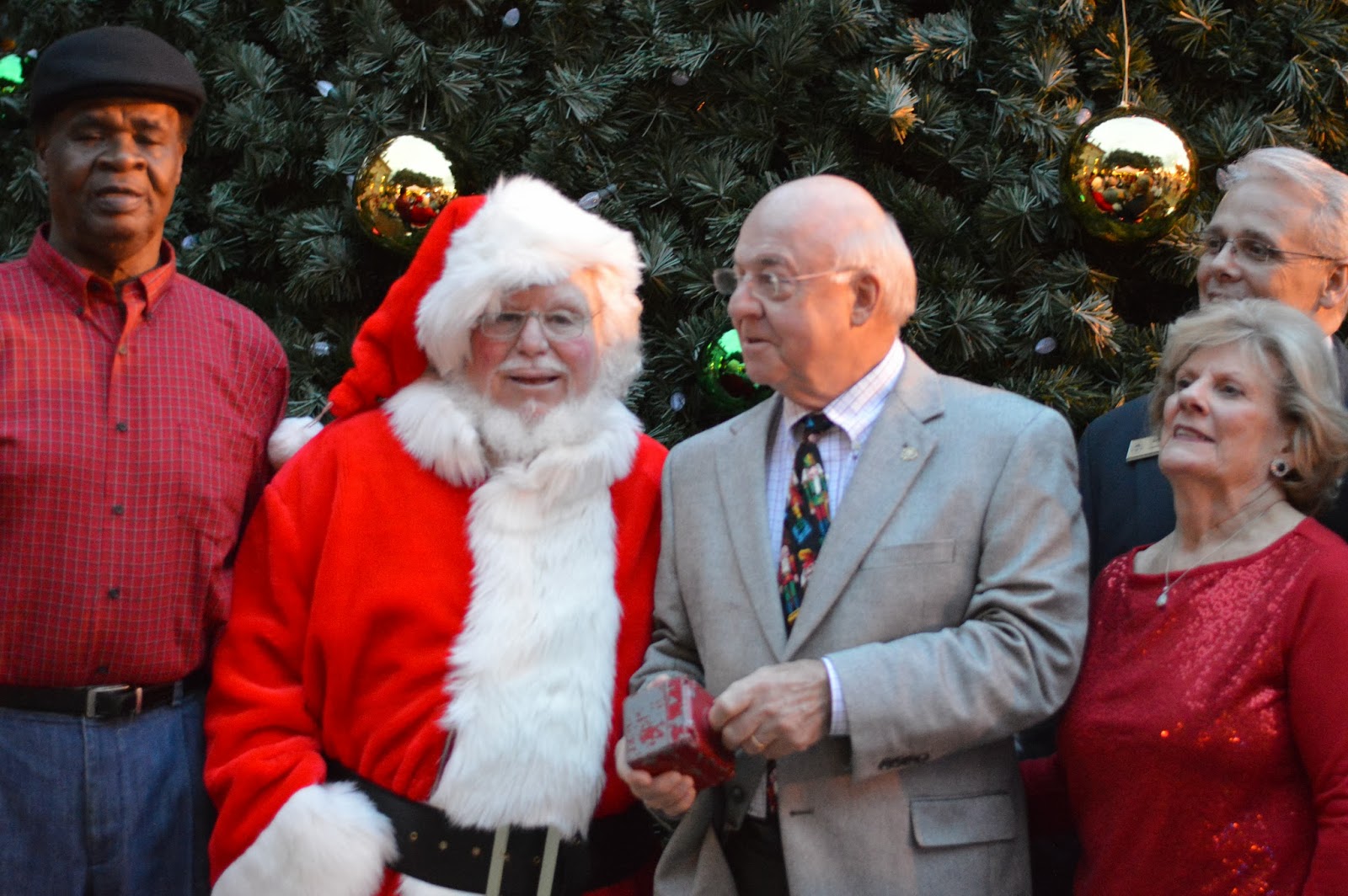 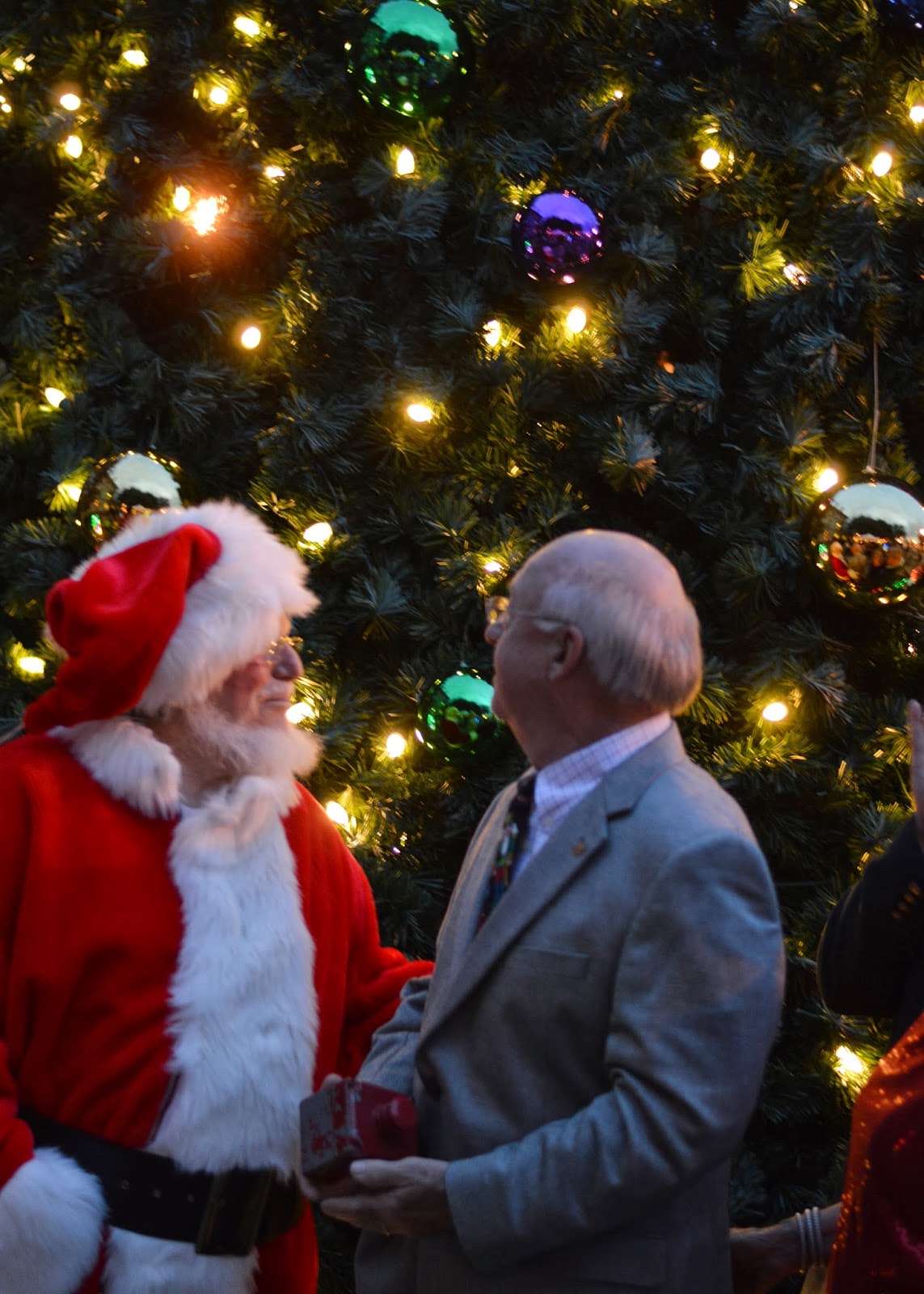 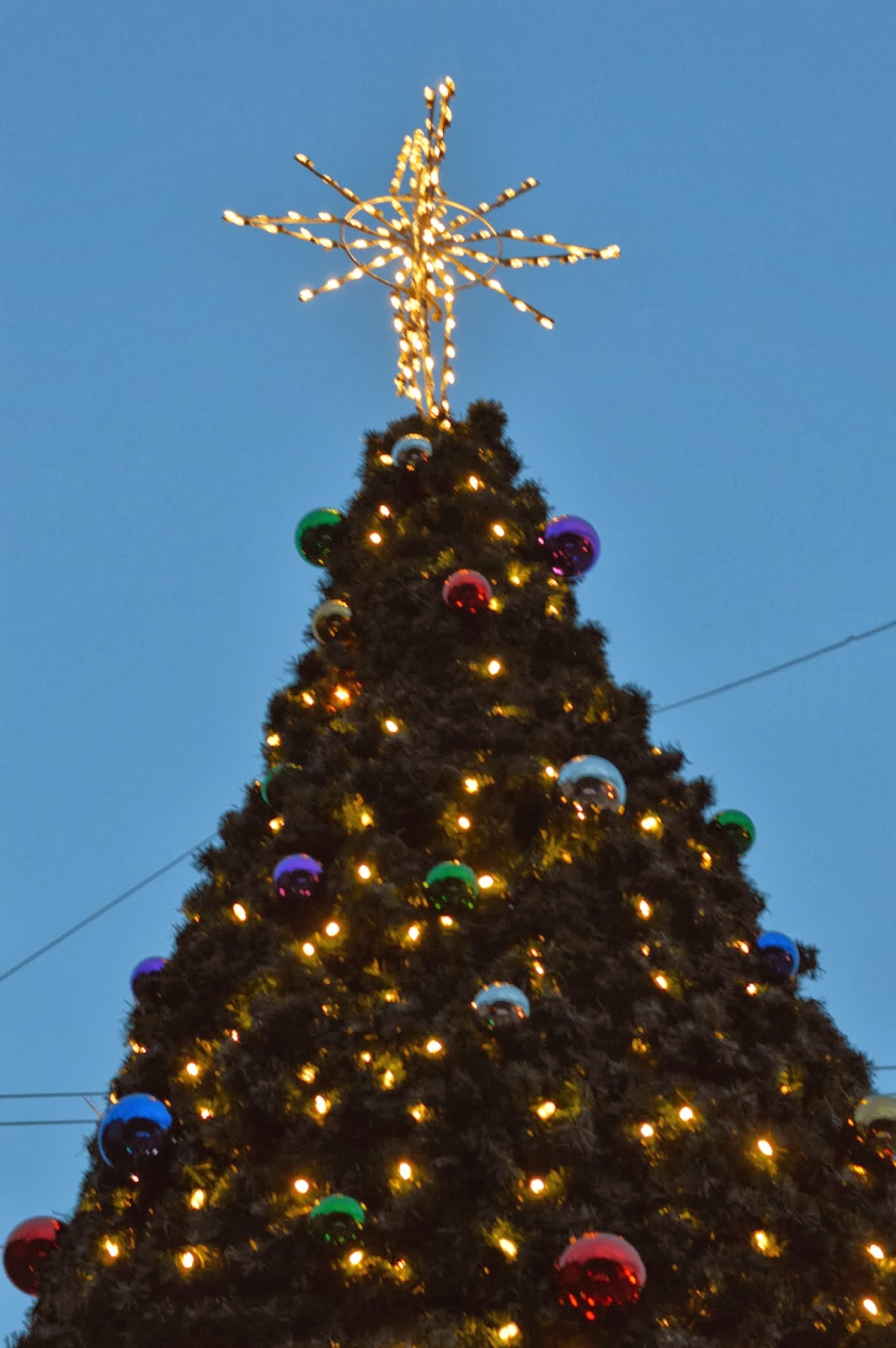 We got there early and Santa was also there but was super awkward about the whole lap sitting situation prior to the tree lightning. I guess maybe they told him to wait until after? We sat right next to him so we’d be the first ones to meet him when the time came! We got to talk to him a good bit and he’s super nice but was also super hilarious. He introduced us to his daughter and kept saying Kye reminded him of his grandsons. His daughter kept saying “SANTA…” to help him keep his cool about it! 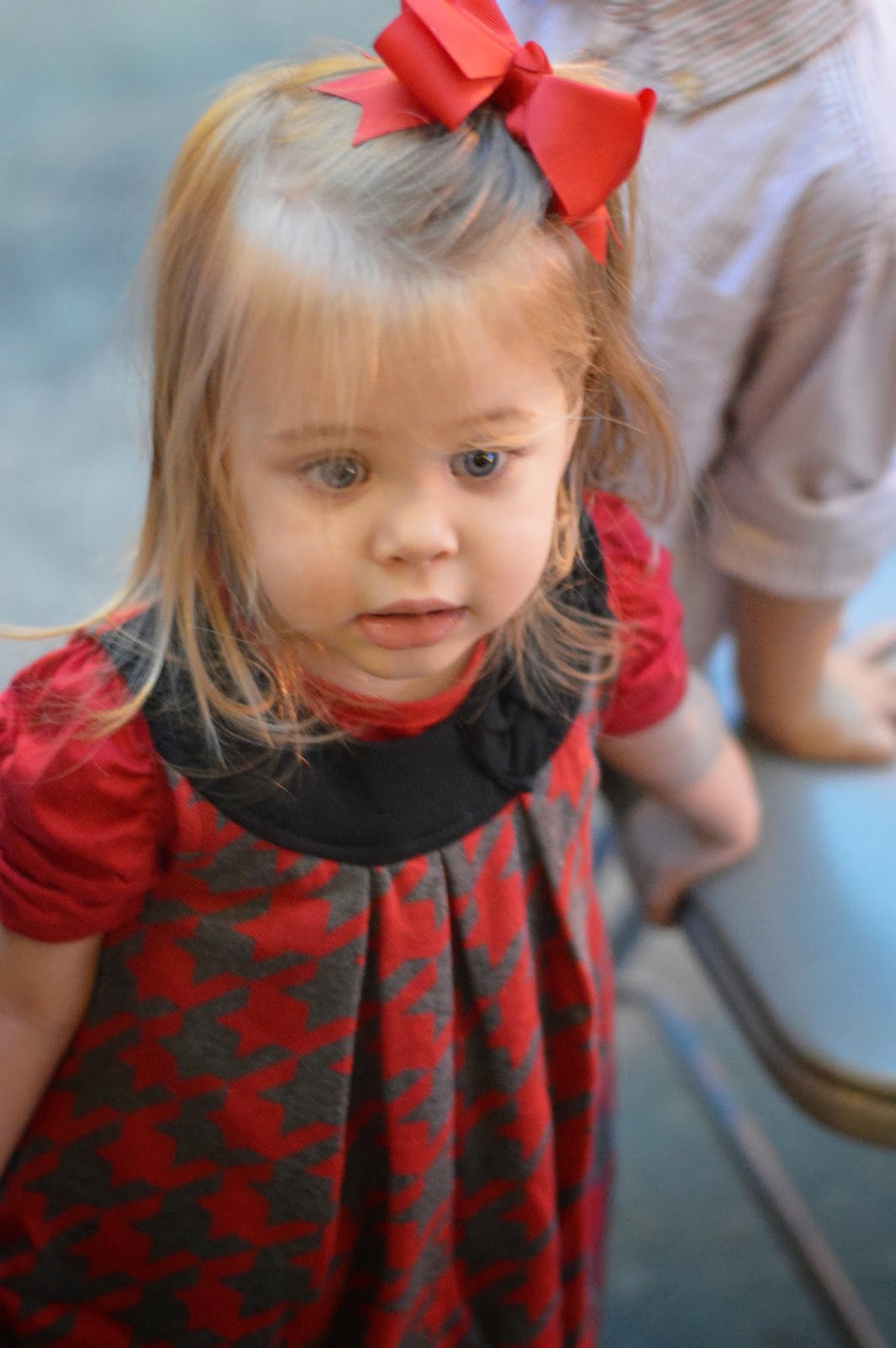 Couldn’t you just see this in advertising or something?!?! LOVE! 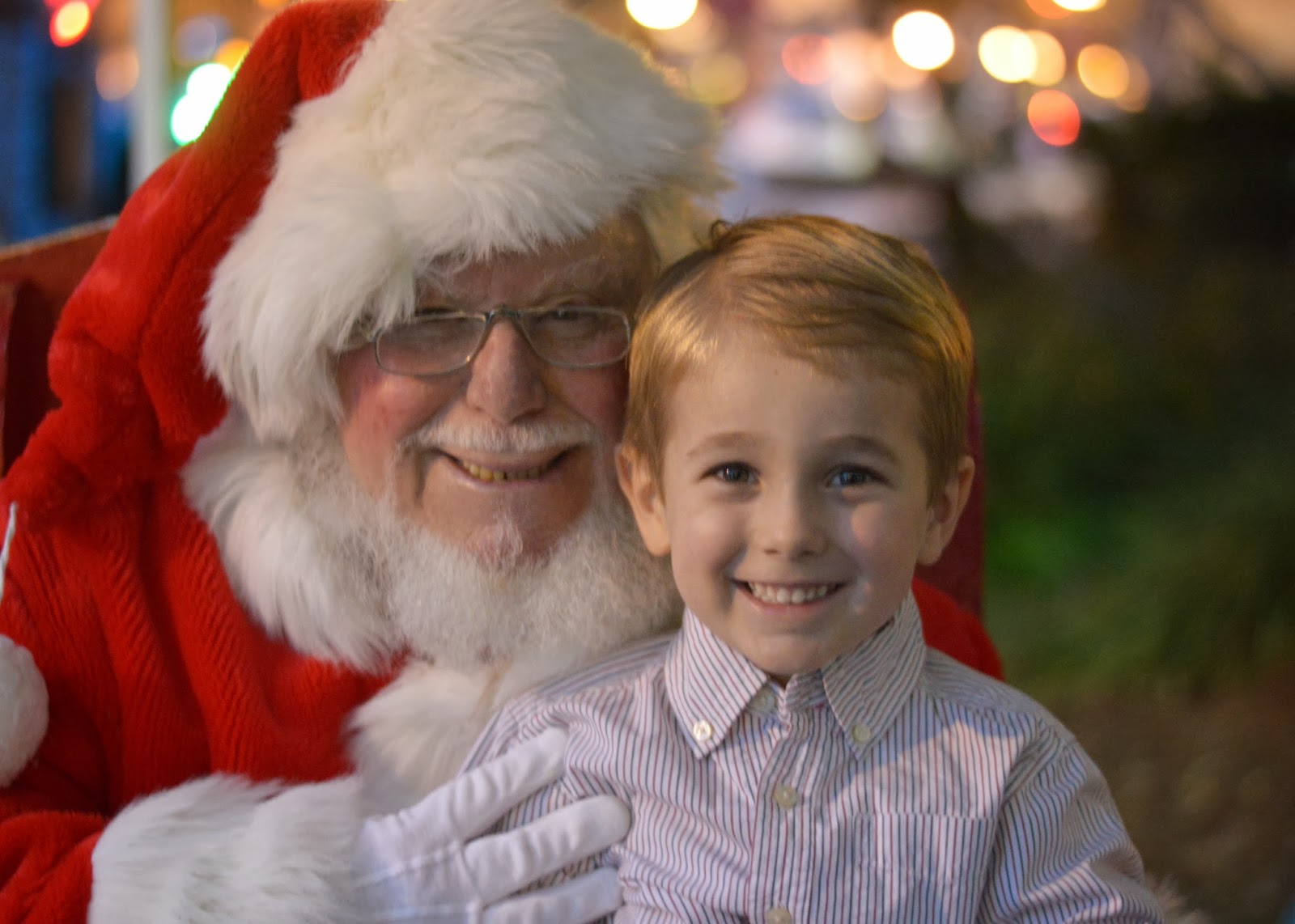 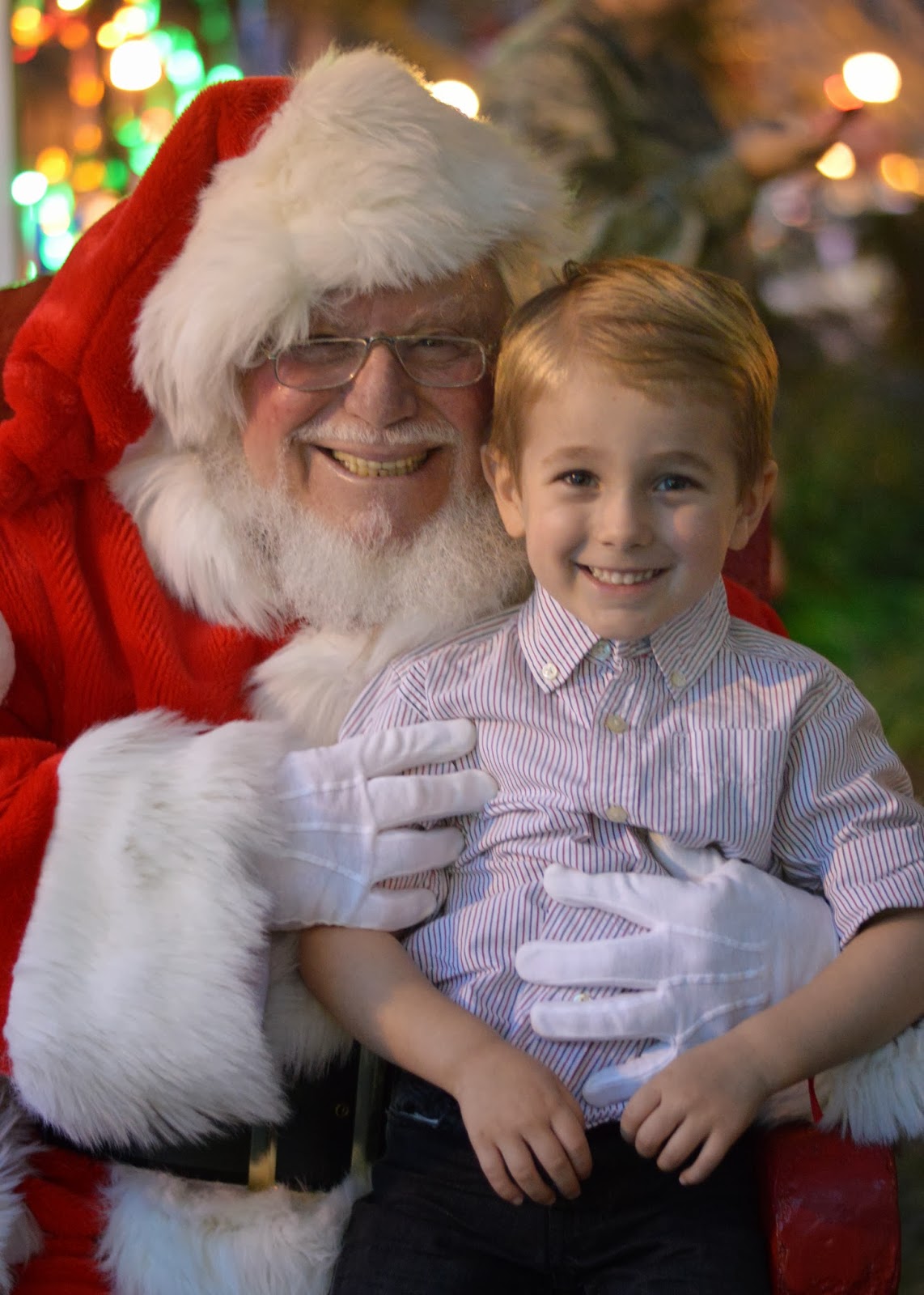 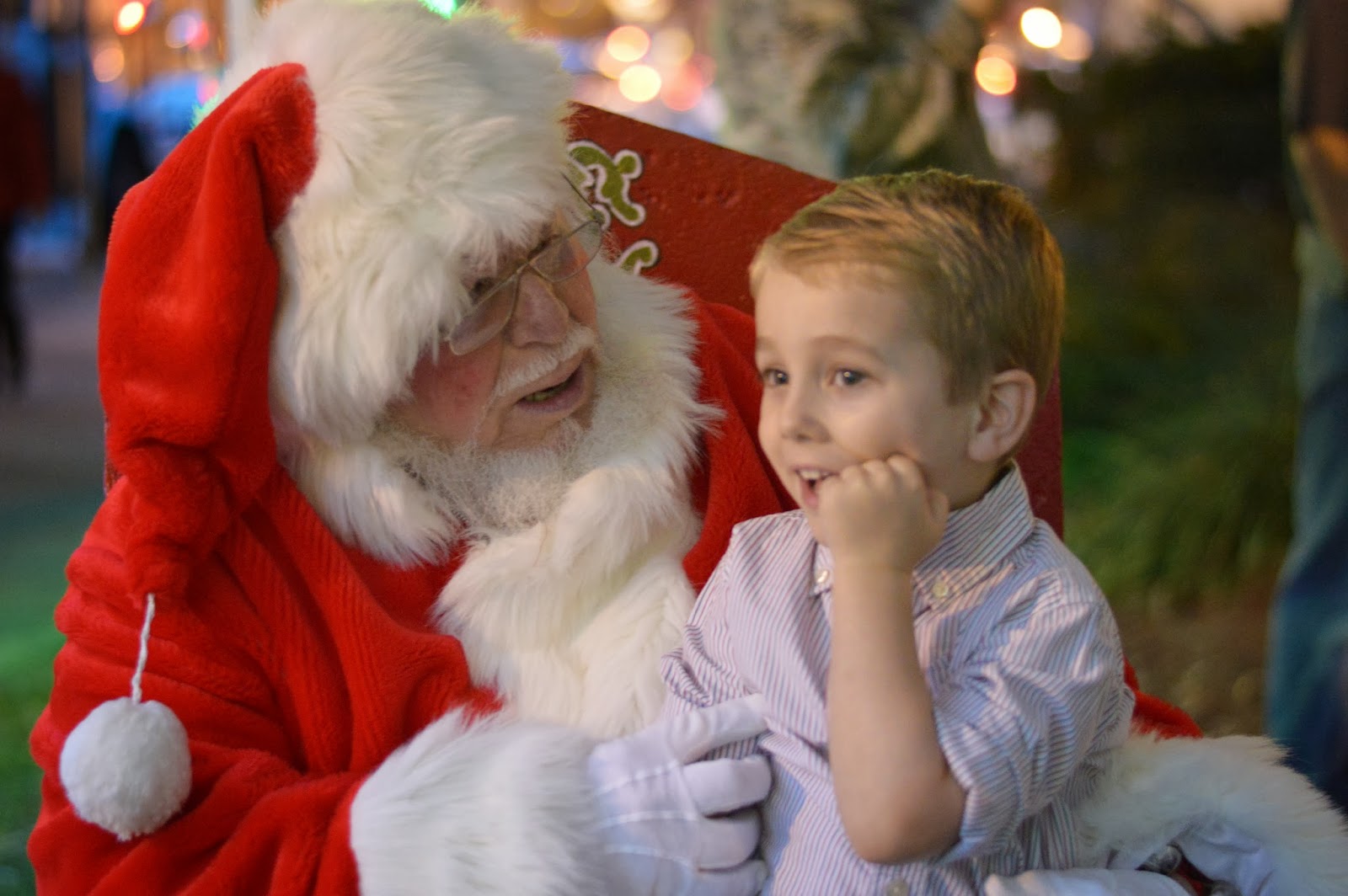 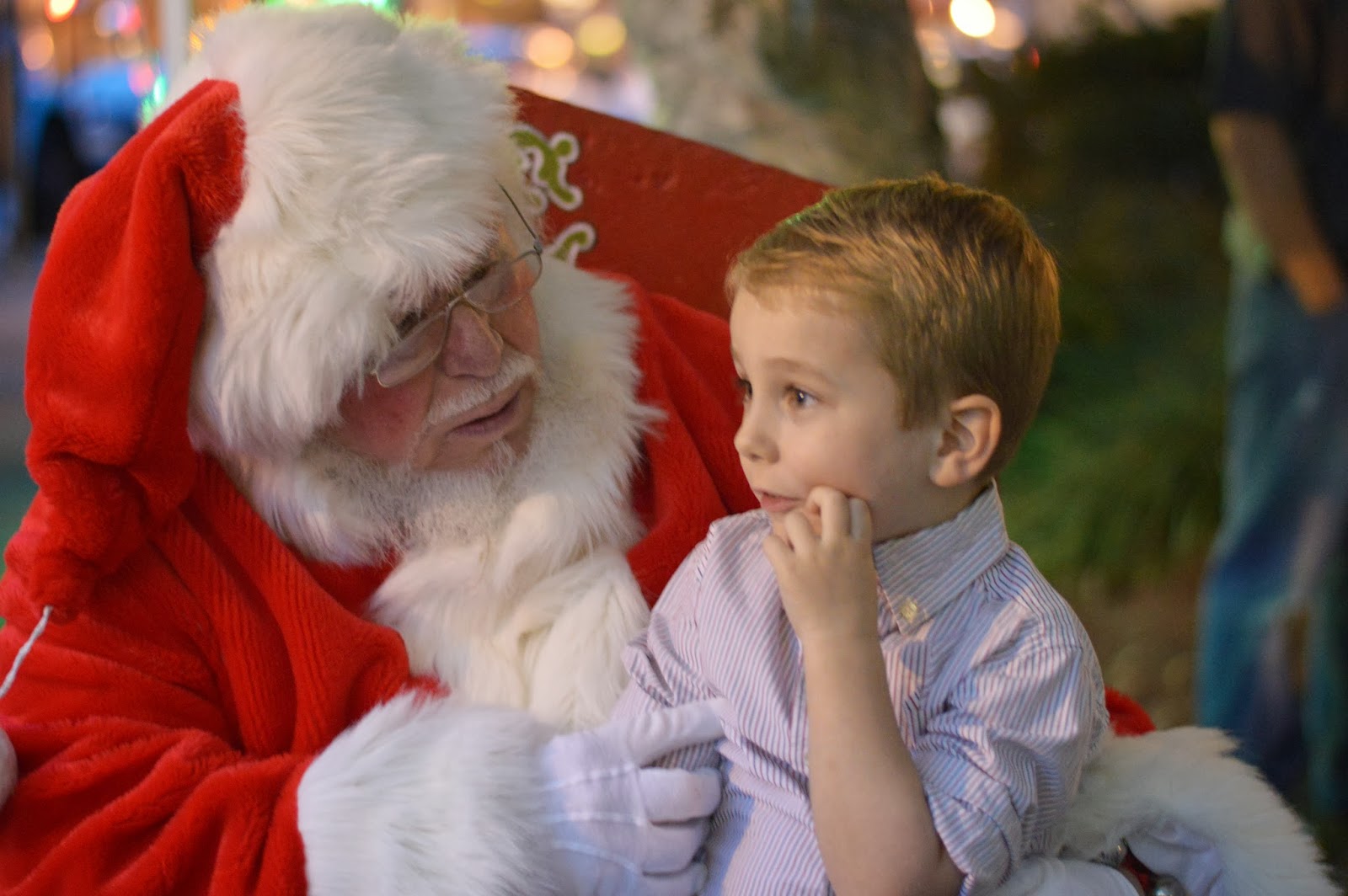 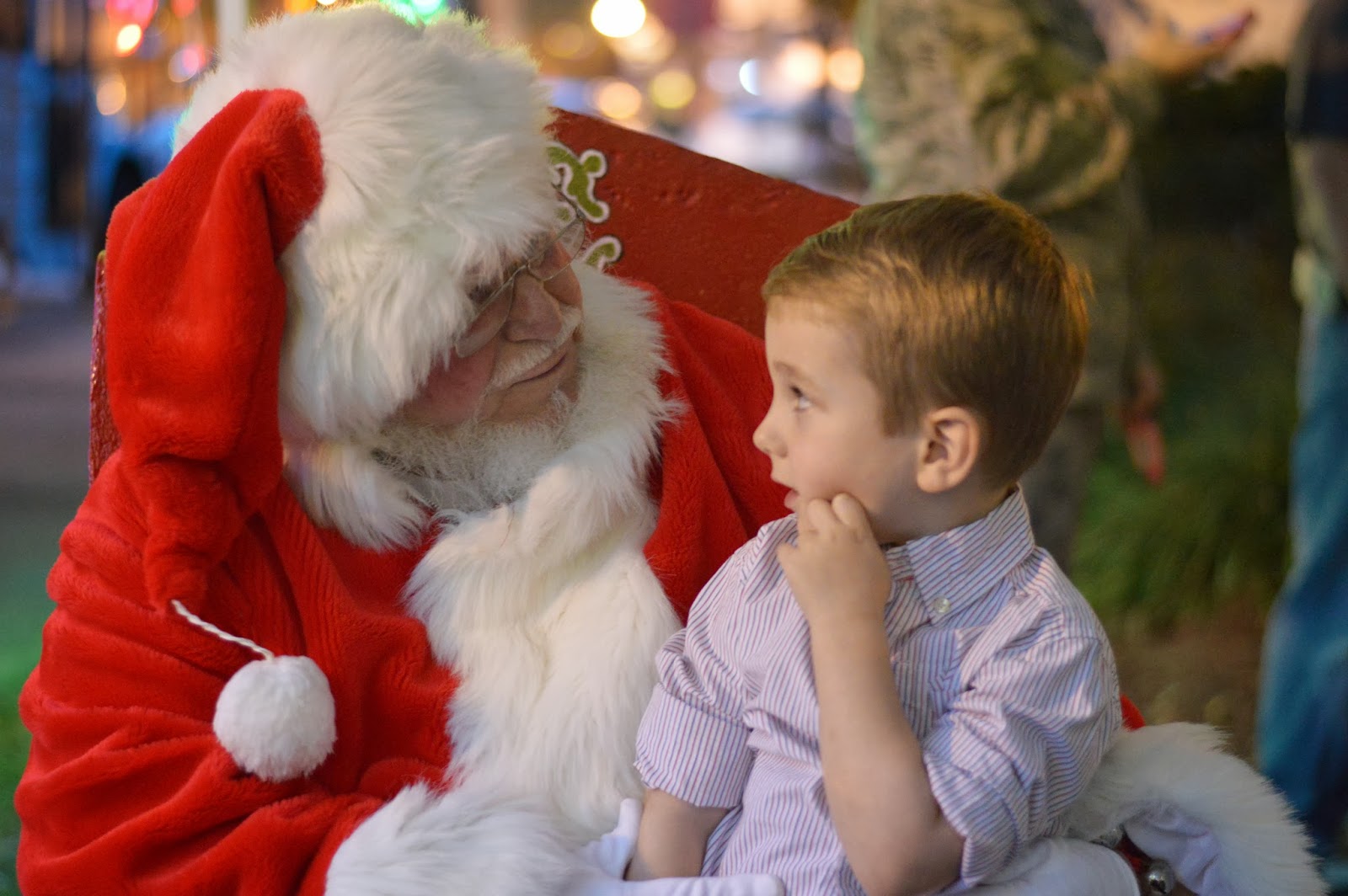 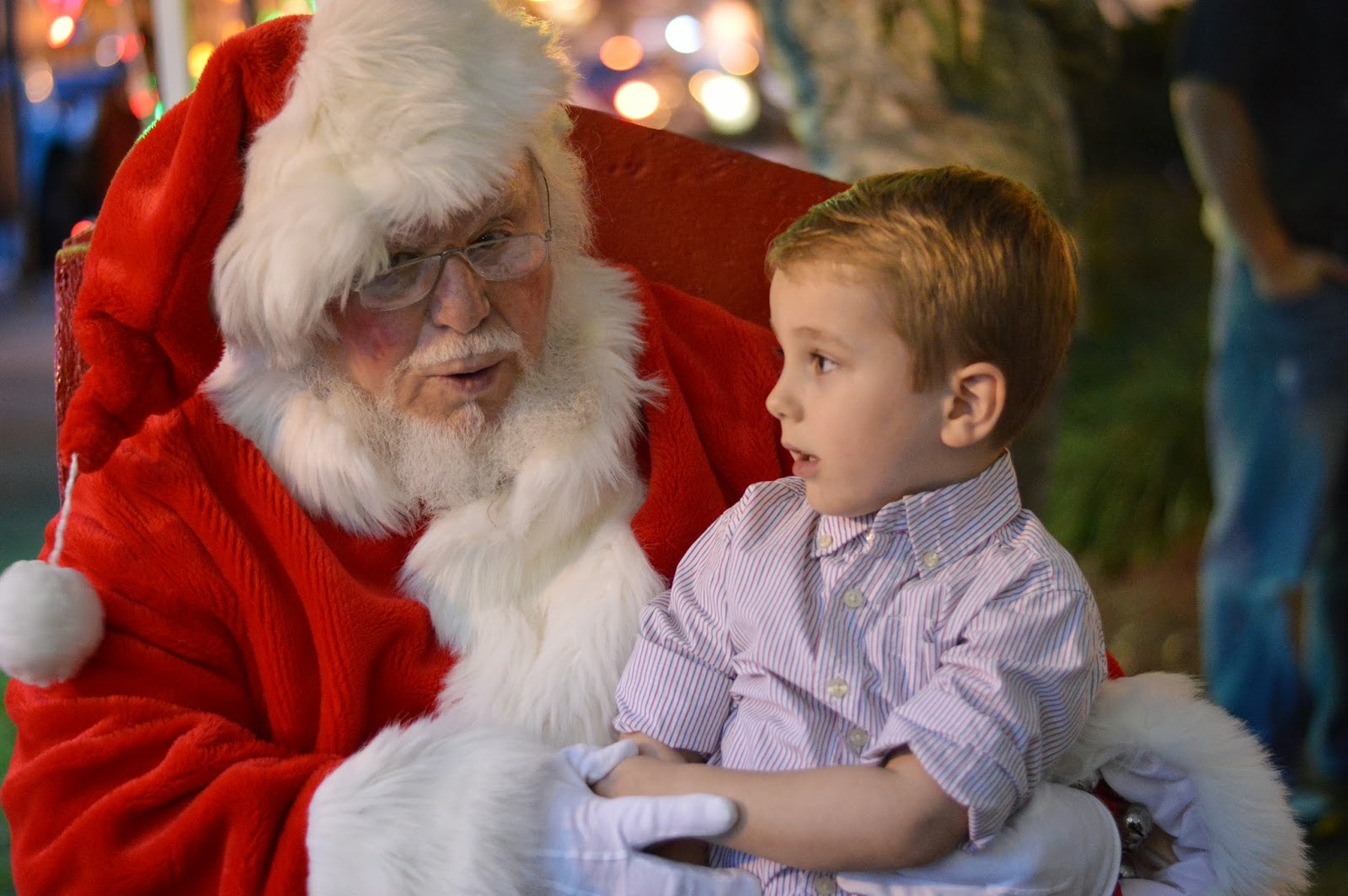 Another favorite of mine 🙂 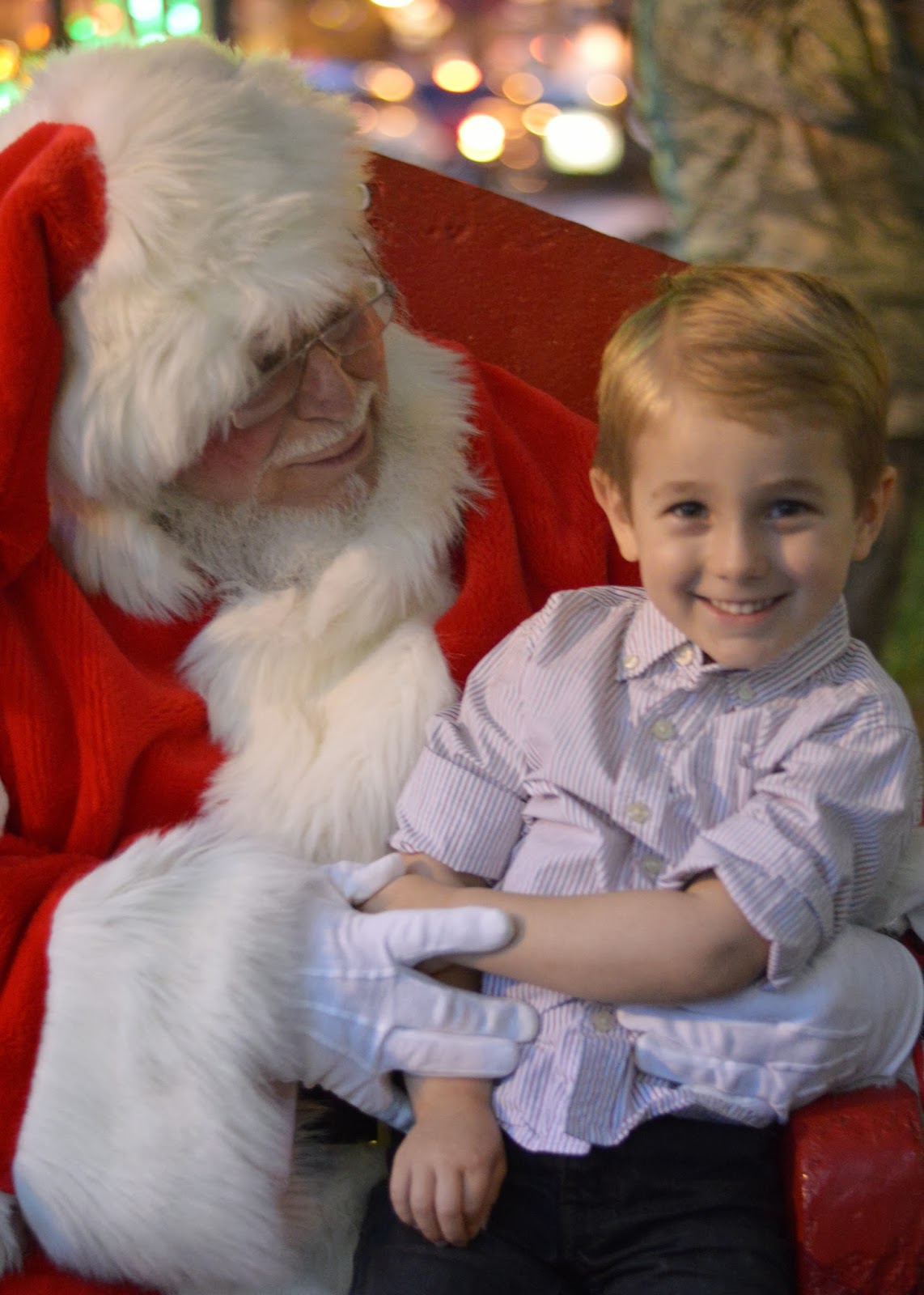 Britt wouldn’t even go nearrrr Santa. It’s hilarious b/c she is SO CRUNK for meeting Mickey but I just know she’s gonna be afraid of him too! She’s been terrified of the Easter Bunny, the Chick-Fil-A cow, and now poor Santa! I hope she at least likes the Princesses!!! I know a lot of times people force it but I just didn’t feel comfortable making her go to him. She was literally shaking and clinging to me and I didn’t have the heart to let her go. So I just stayed there with her and tried to let her visit with him a bit. My plan for Disney is to just plan to be in the pics with her and I think it’ll be fine 🙂 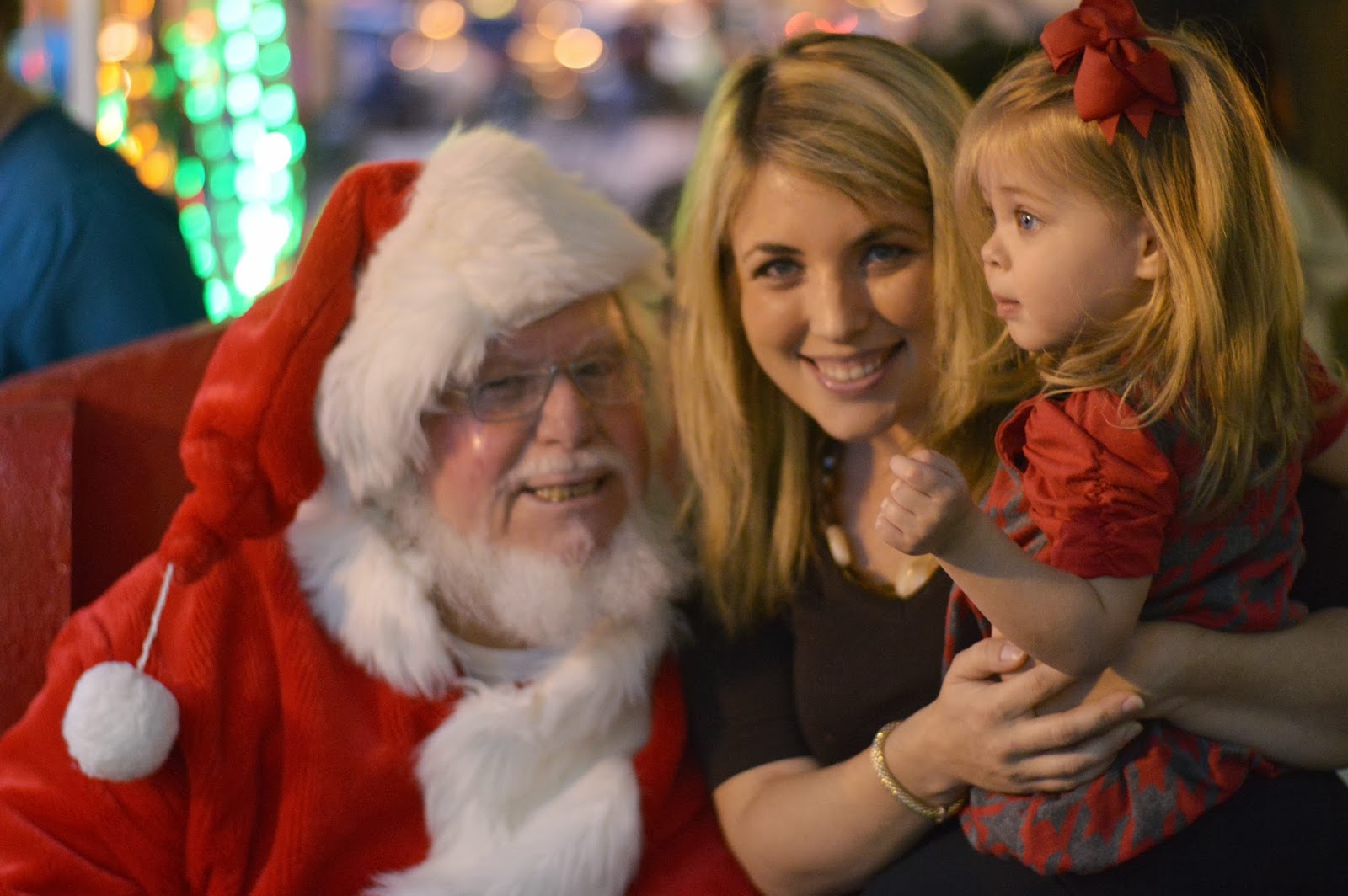 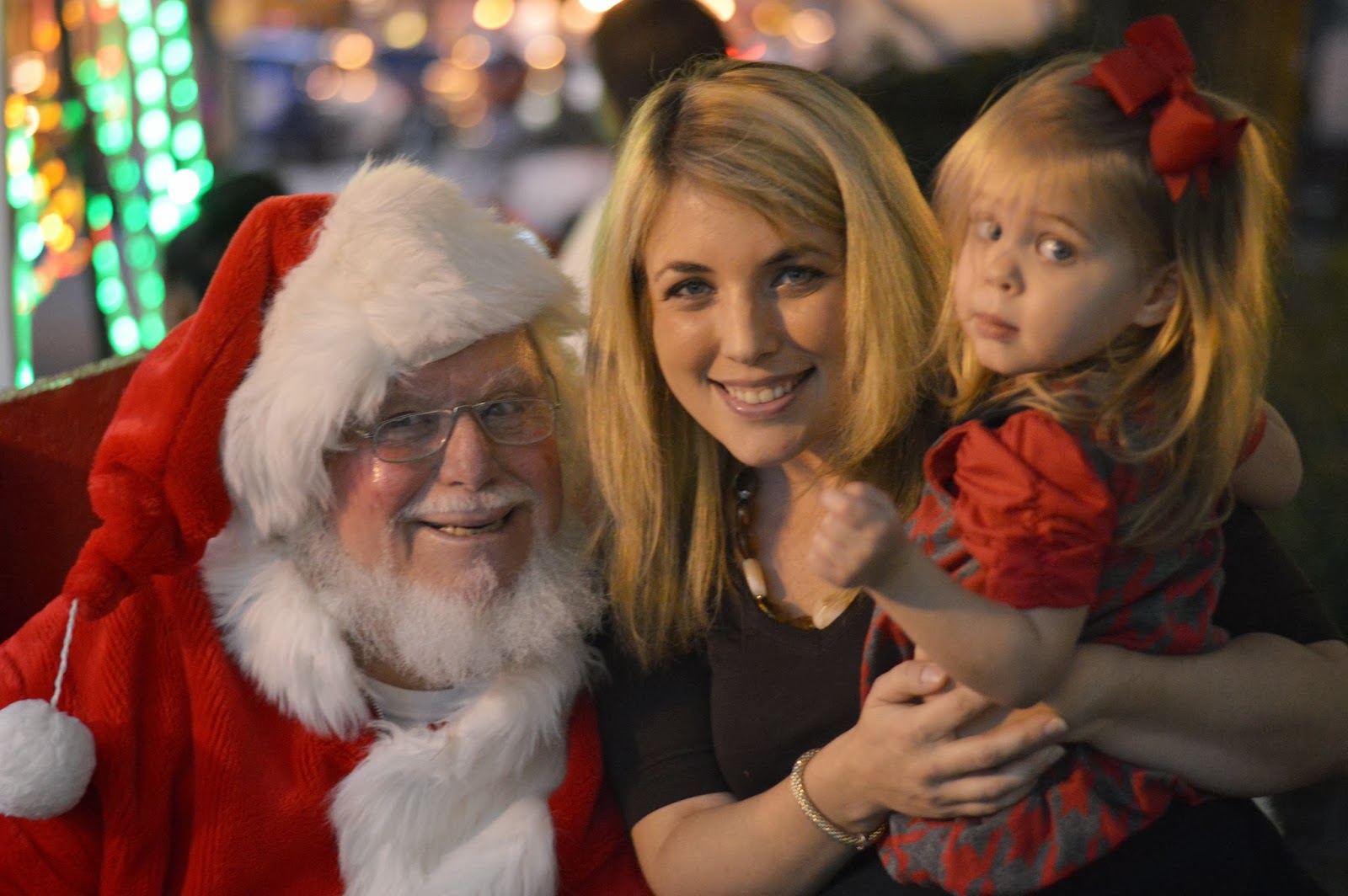 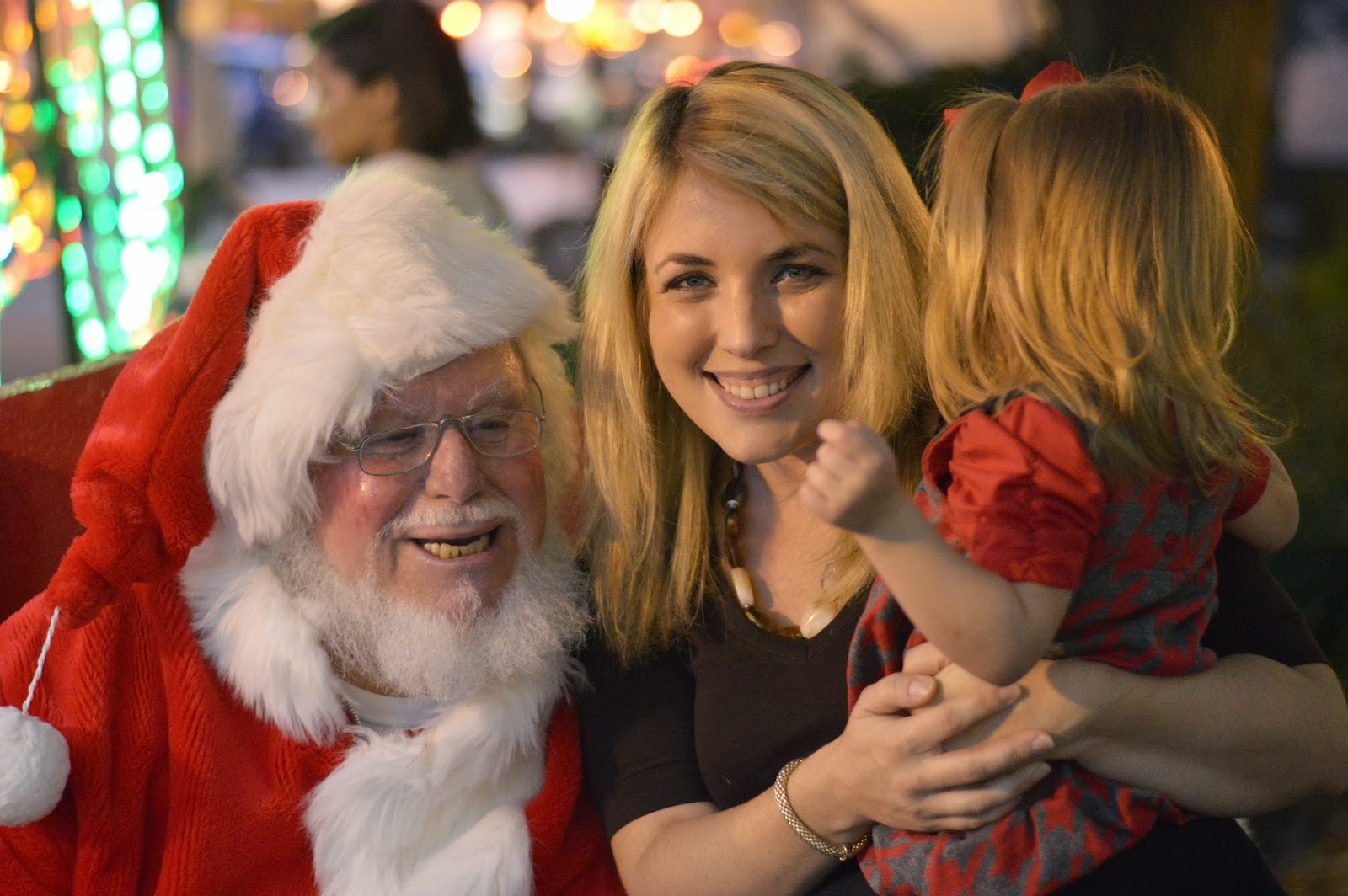 Attempting to bribe with candy! Which I mean I’m kinda glad she wouldn’t go to a strange man offering her candy, right? 😉 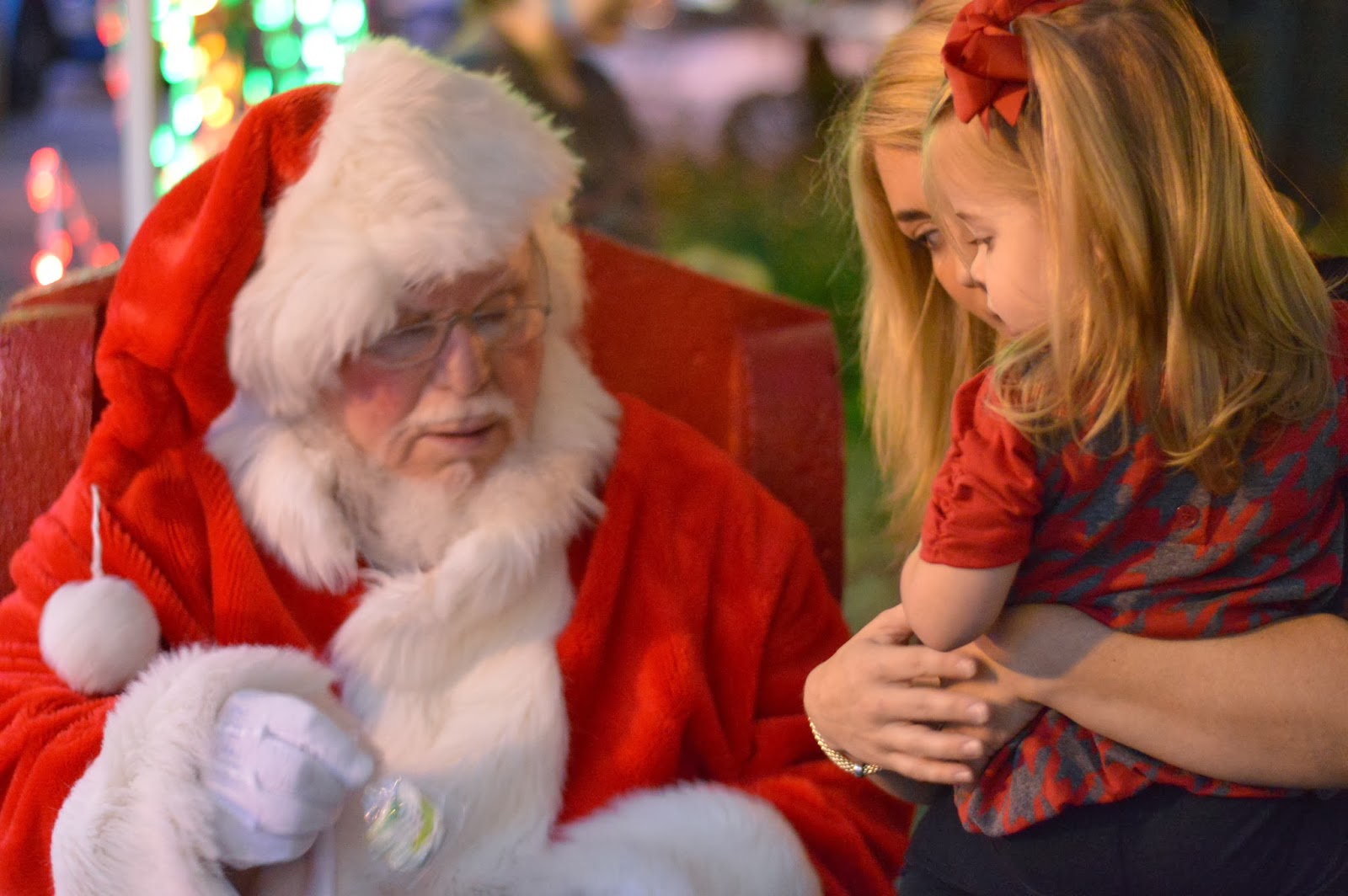 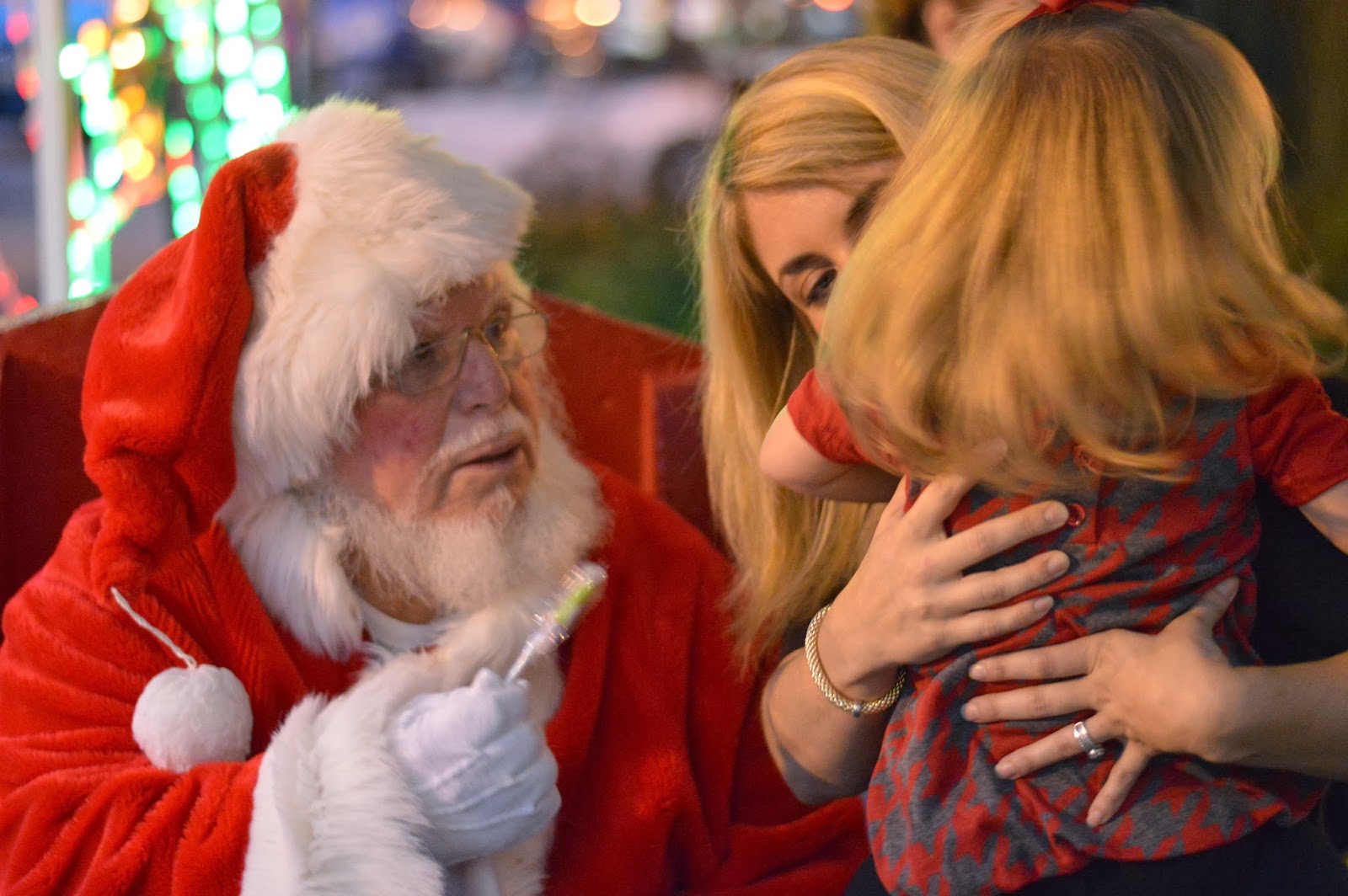 Santa is over it hahahah 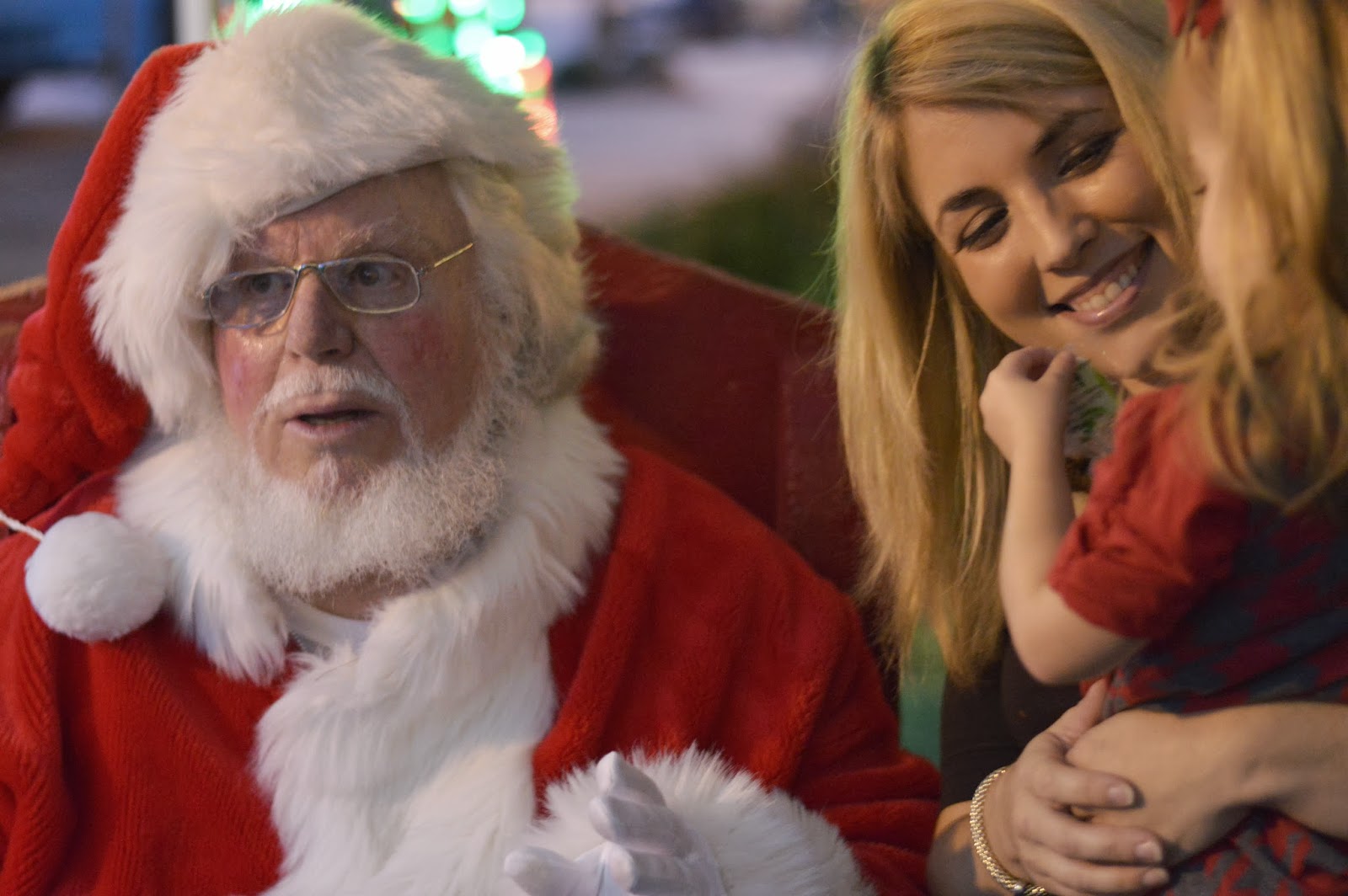 It was a fun little event and I heard our crew was even on the news the next morning! The reporters all kept saying how adorable the kids were so I thought we might get on something 😉 Of course people commented and told me that they at first thought it was Crissy on the news rather than me b/c we look so alike haha!

It was a Wed night so we left from there and hit up Zaxby’s. Casey and Jordan had come with me to the event and Zach had to meet us at Zaxby’s b/c he was coming back from some late meeting or something. Our Zaxby’s has 99 cent kids meals on Wednesdays so it’s the jam! We grubbed out and then headed to church (although so many of our church members were at Zaxby’s we could have just held class there!). 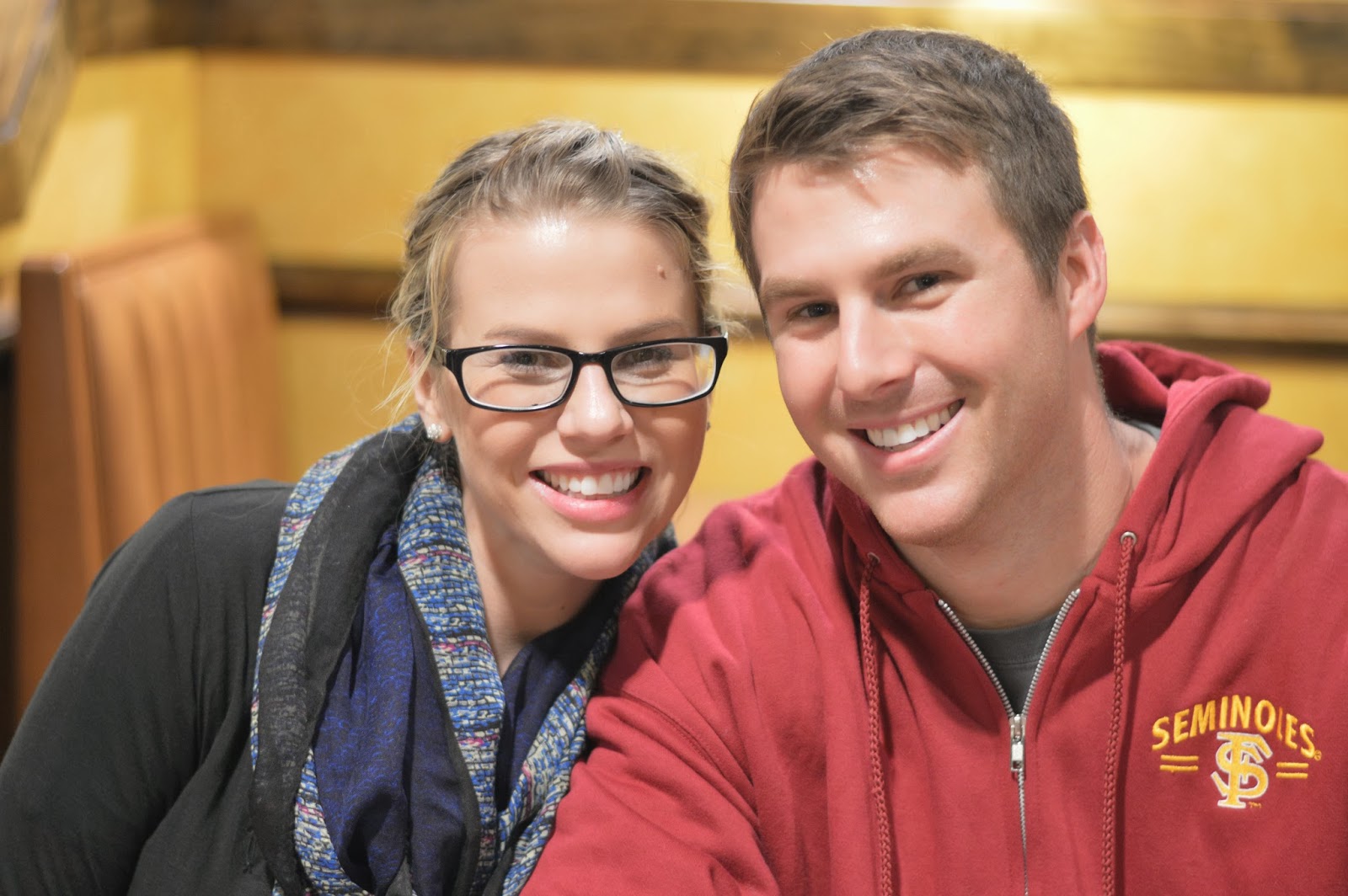 My brother from another mother 😉 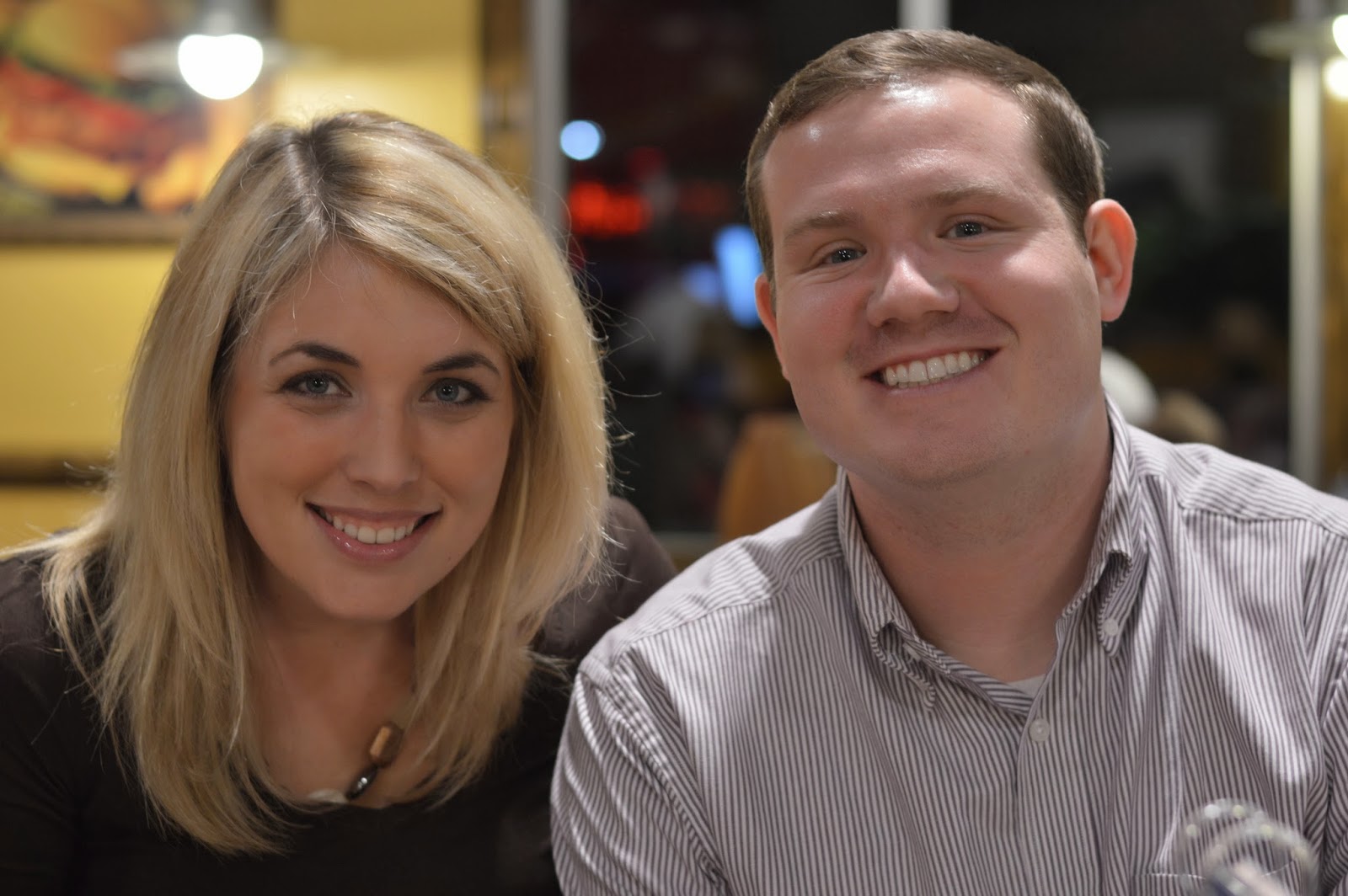 That night Rachael and her fam were driving through to go to Disney! I am SO GLAD they stopped through and stayed with us!!! I ADORE their entire family. Rachael is seriously one of my most favorite people ever and Greg is her perfect match! Plus their kids are awesome too. Duh 😉 I love that Zach also truly enjoys their company! Random story but Zach was out of town for work and went into a Cracker Barrel to get a book on tape for the drive and ran into Greg who was doing the same thing! How funny is that?!?! Both of them were out of town on business! Such a sign that they are destined to be friends, right?

The next morning Kye was SO PUMPED and surprised to see Macy and Brady! They got in after the kids were in bed so it was cute to see how happy they all were to see each other. I wish they could play together more often…we had to head out to school and they had to get back on the road but at least they got to enjoy breakfast together!!! 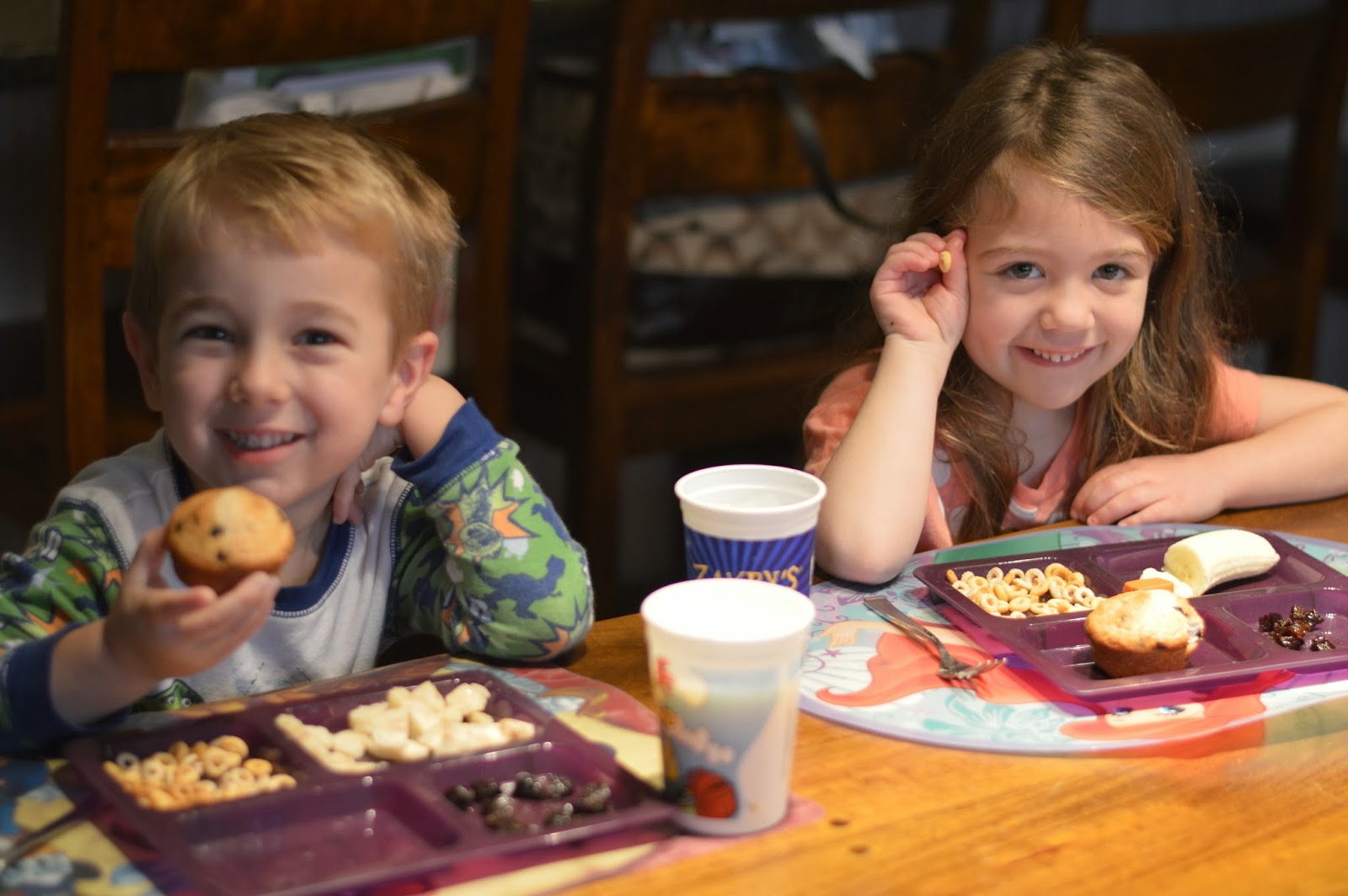 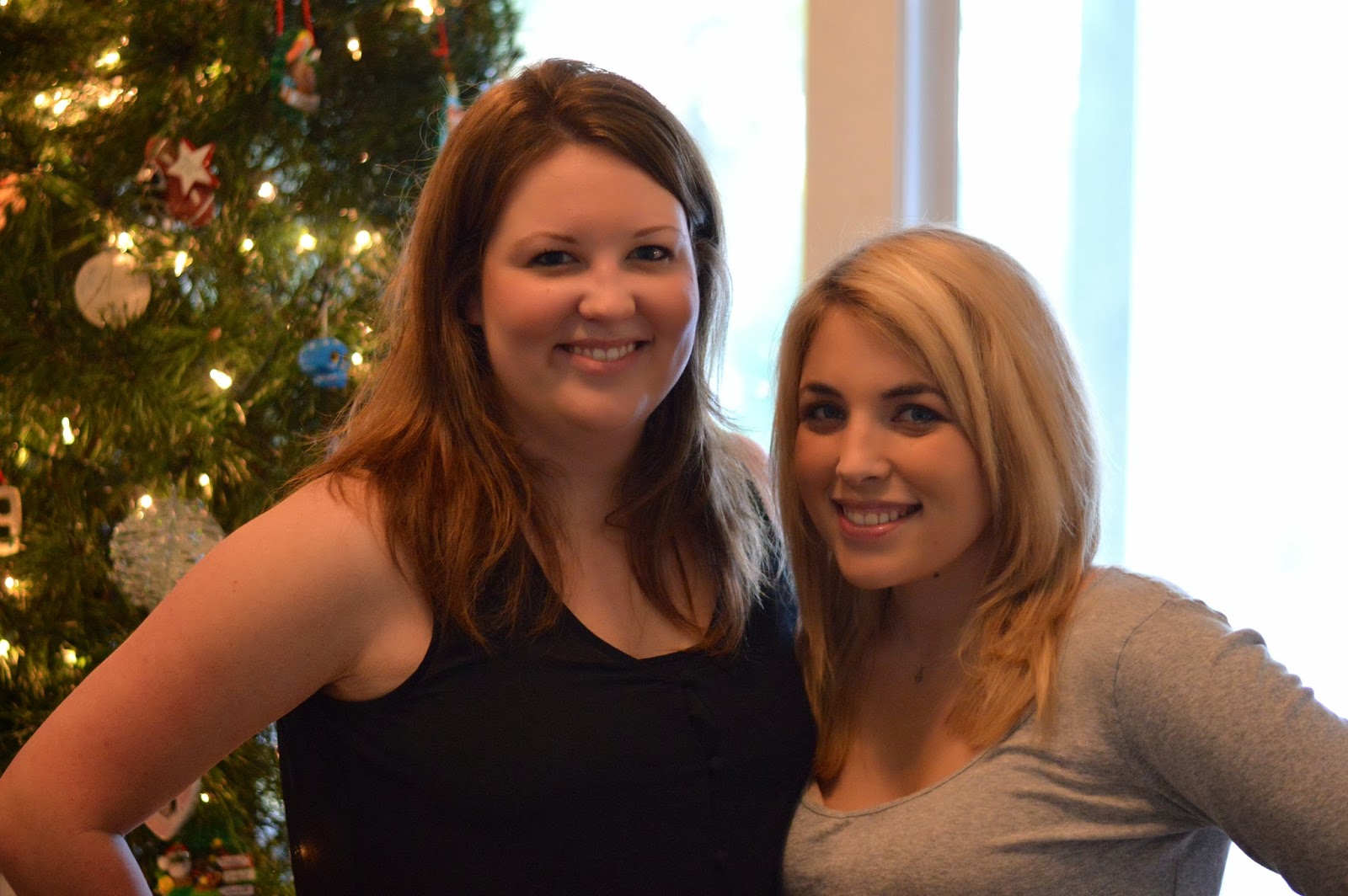 Tell me my child is not a lady’s man… 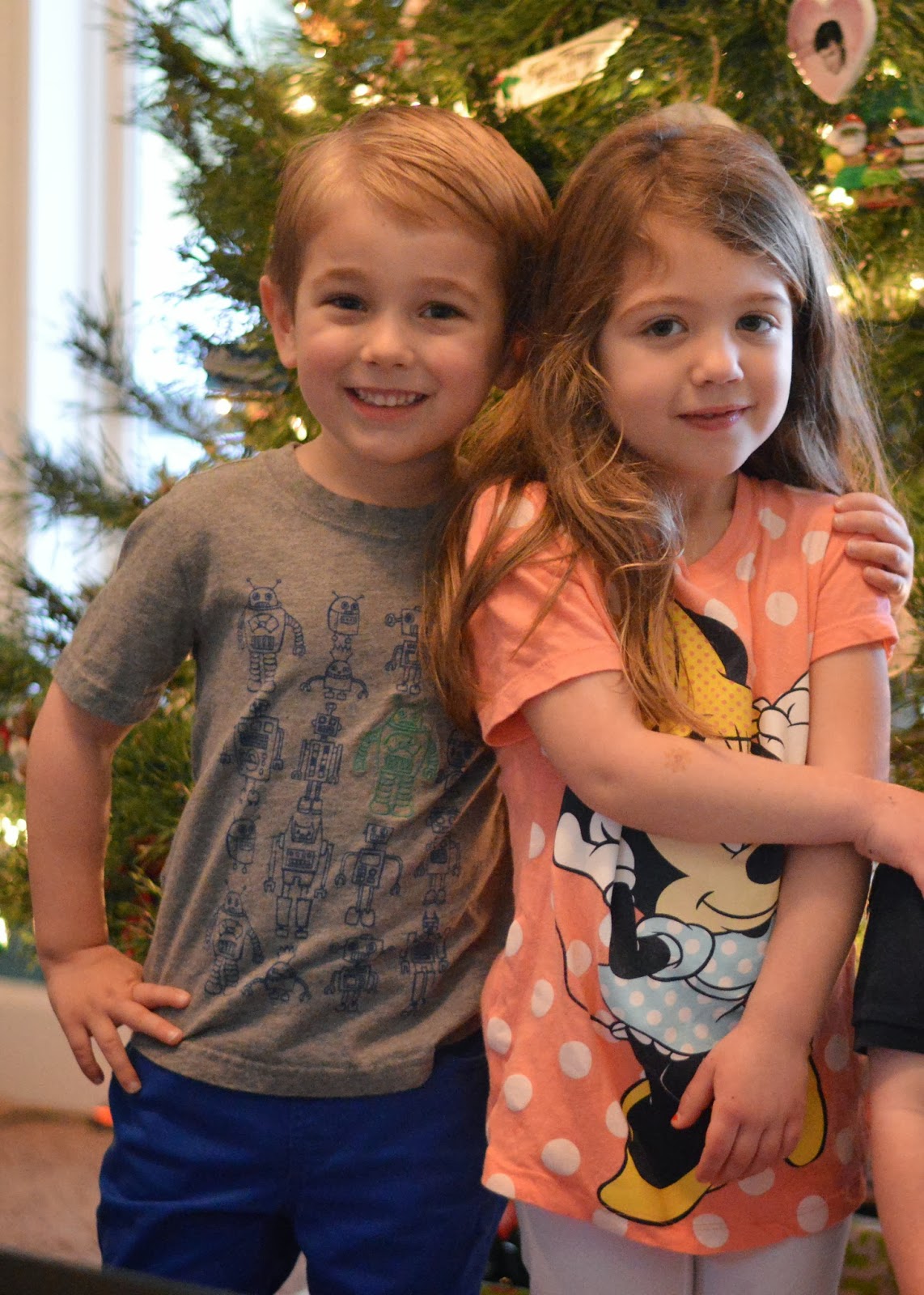 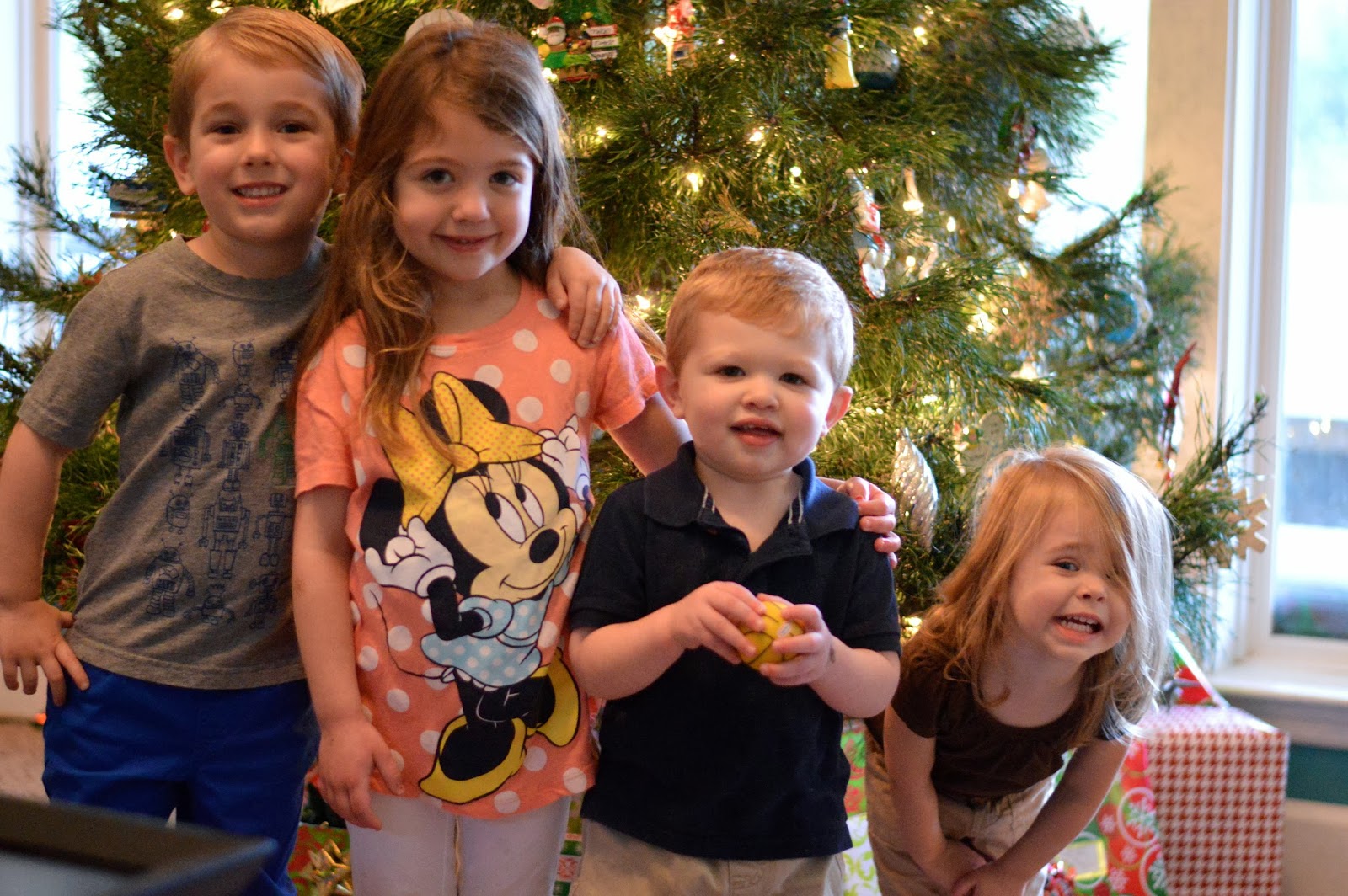 I wish we got to spend more time with Rach and fam and I hope they will all come back again soon! Maybe for a longer stay next time! Z really wants to take Greg golfing since they have been together a few times when we go up their way to visit. I know I say it all the time but to my Atlanta area friends: we live ON THE WAY to Disney World! If you’re traveling we’d love to have you visit 🙂

With us being so sick once Christmas neared, I’m so glad we were able to at least visit with Santa and have some Christmas festivity cheer!

Here is when we met Santa last year!