I kinda am obsessed with vacations. I love traveling with our family. I love the memories made together (and, hello, quality time is for sure my love language!). Pretty much any time the kids have off of school Zach and I try to do a getaway of some kind. Especially now that Kye is in “legit” school and has an attendance policy (a too strict of one, in my opinion anyway) we have to be mindful of the days he misses.

We lucked out in a BIG WAY and when I was checking the Touring Plans crowd calendar for Disney crowds I noticed that the weekend of Labor Day was actually a low crowd time for the parks. SCORE. Kye’s attendance policy considers them present as long as they are there half the day so we checked Kye out of school on Thursday afternoon at 1ish, he missed school Friday and then we drove back on Monday so he was back to school on Tuesday. Since Monday was a holiday and he was there for half the day Thur, he only missed one day of school 🙂

We left at nap time and thought we’d try something a little different for Tess’s seat in hopes of het sleeping for her nap. Zach used a red sheet and completely covered her seat area. It semi-worked? She got about a 45 min nap or so. The dvd player is such a blessing. All three kids happily watched movies and we had a great ride down! 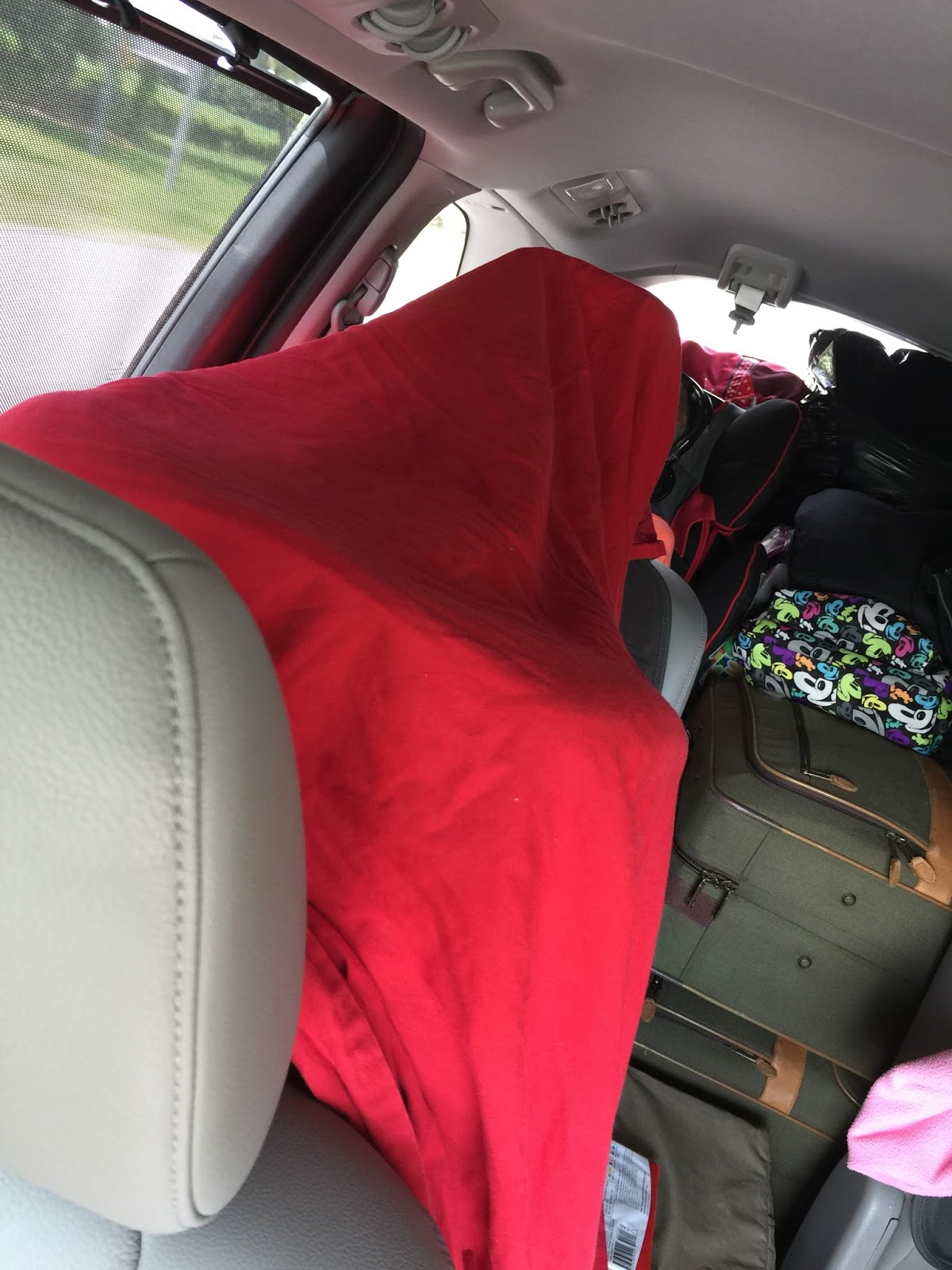 I get asked OFTEN about where we stay when we go to Disney. Davenport is where it’s at y’all! Check out VRBO and search the Davenport area. It’s about 15 min from the Disney gates and we always find condos/houses with 4-5 bedrooms. This time we had a pool in our backyard, 2 master bedrooms, and 3 additional bedrooms. It couldn’t have worked out better! The house was BEAUTIFUL and only $100 a night. You can’t beat that! 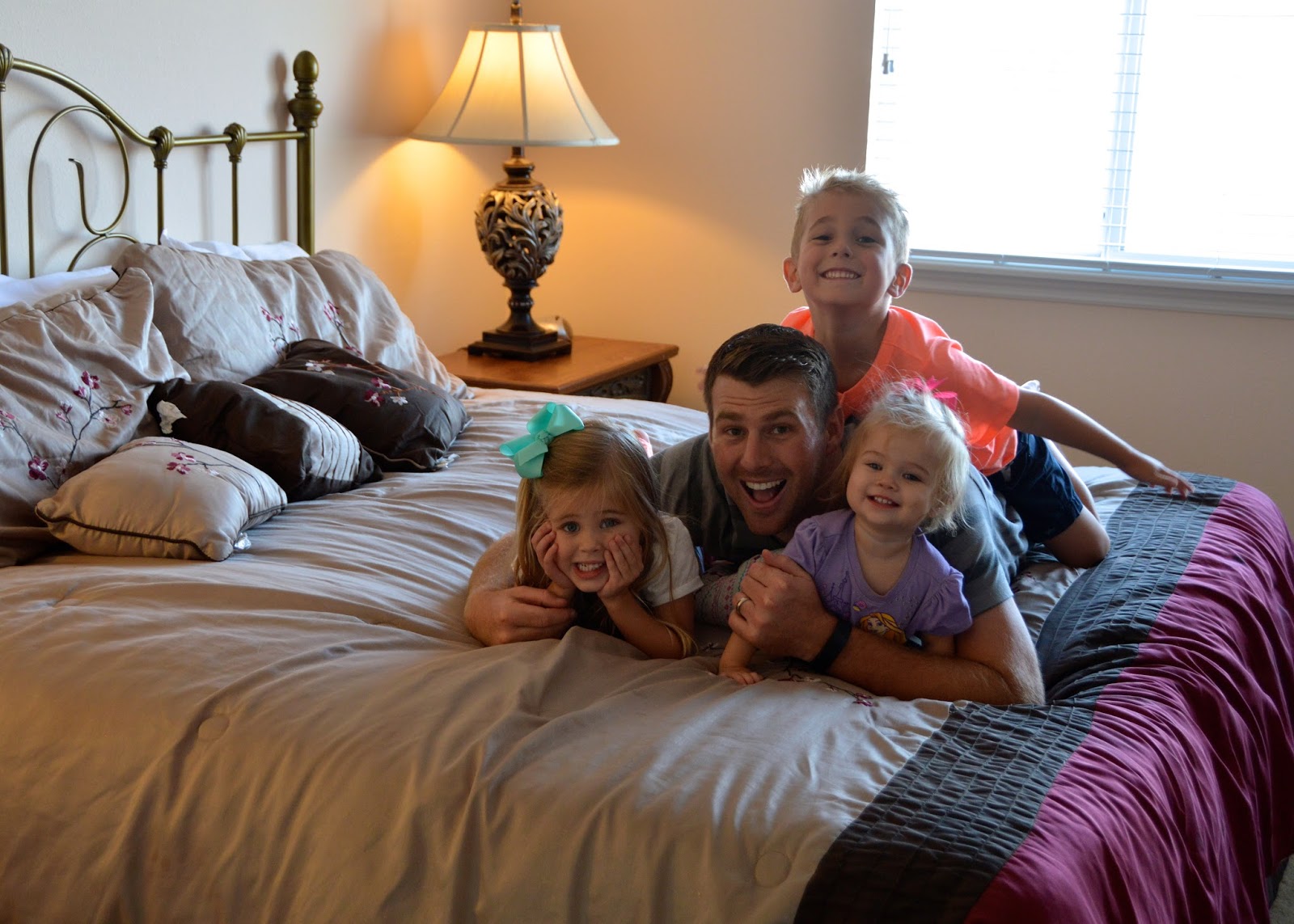 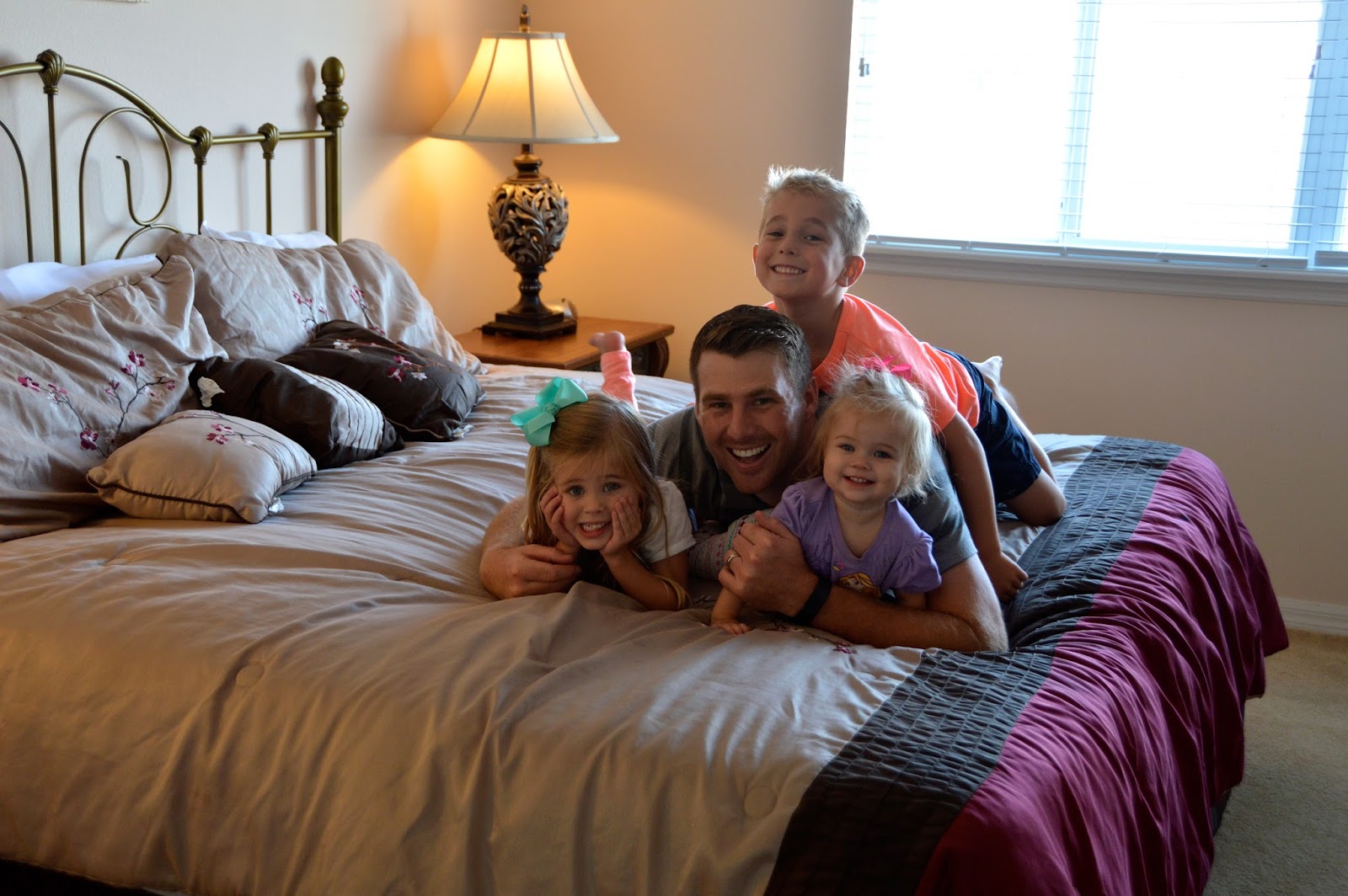 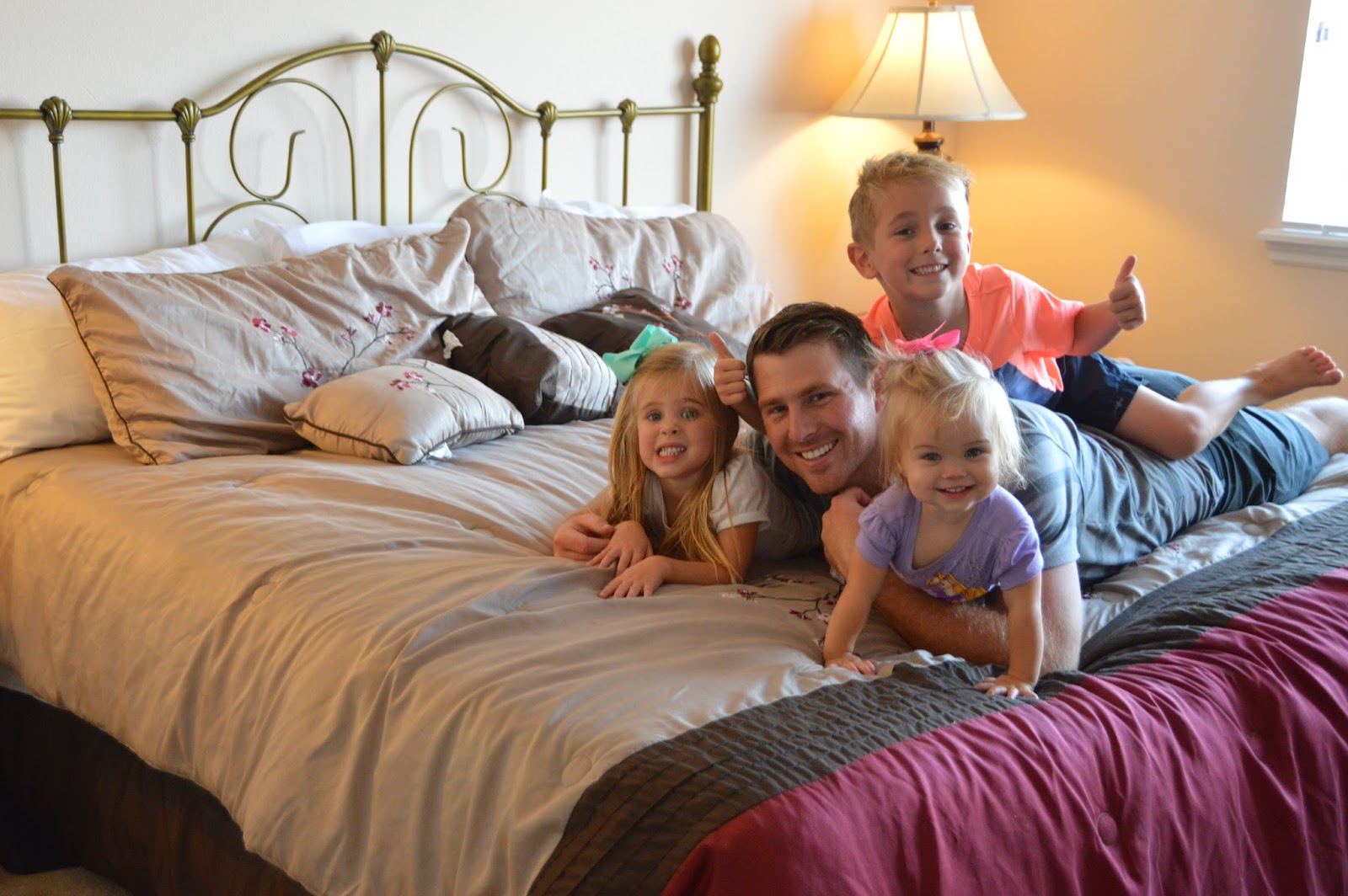 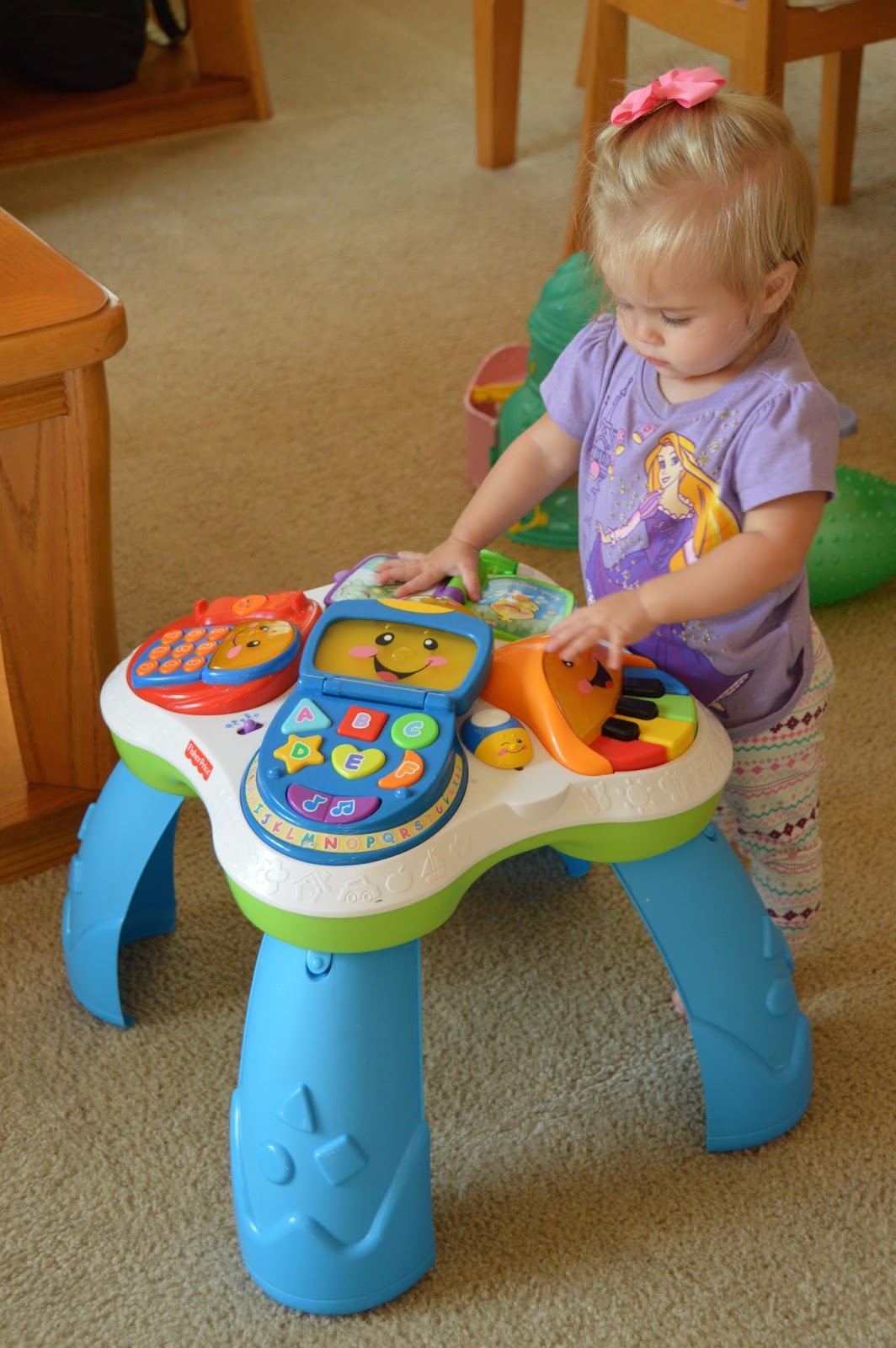 We fed the kids early to get them in the bed early in prep for the BIG day the following day! 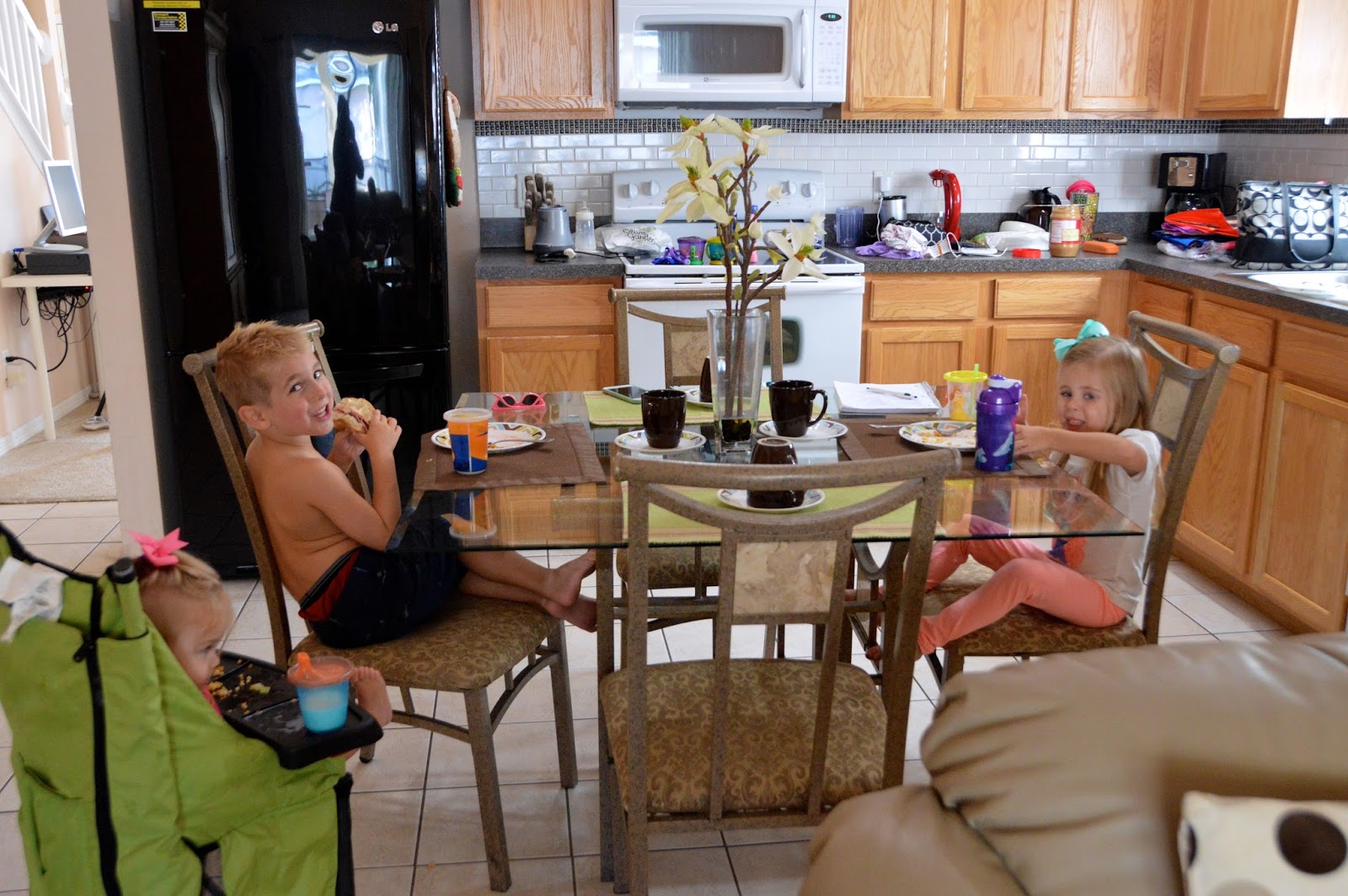 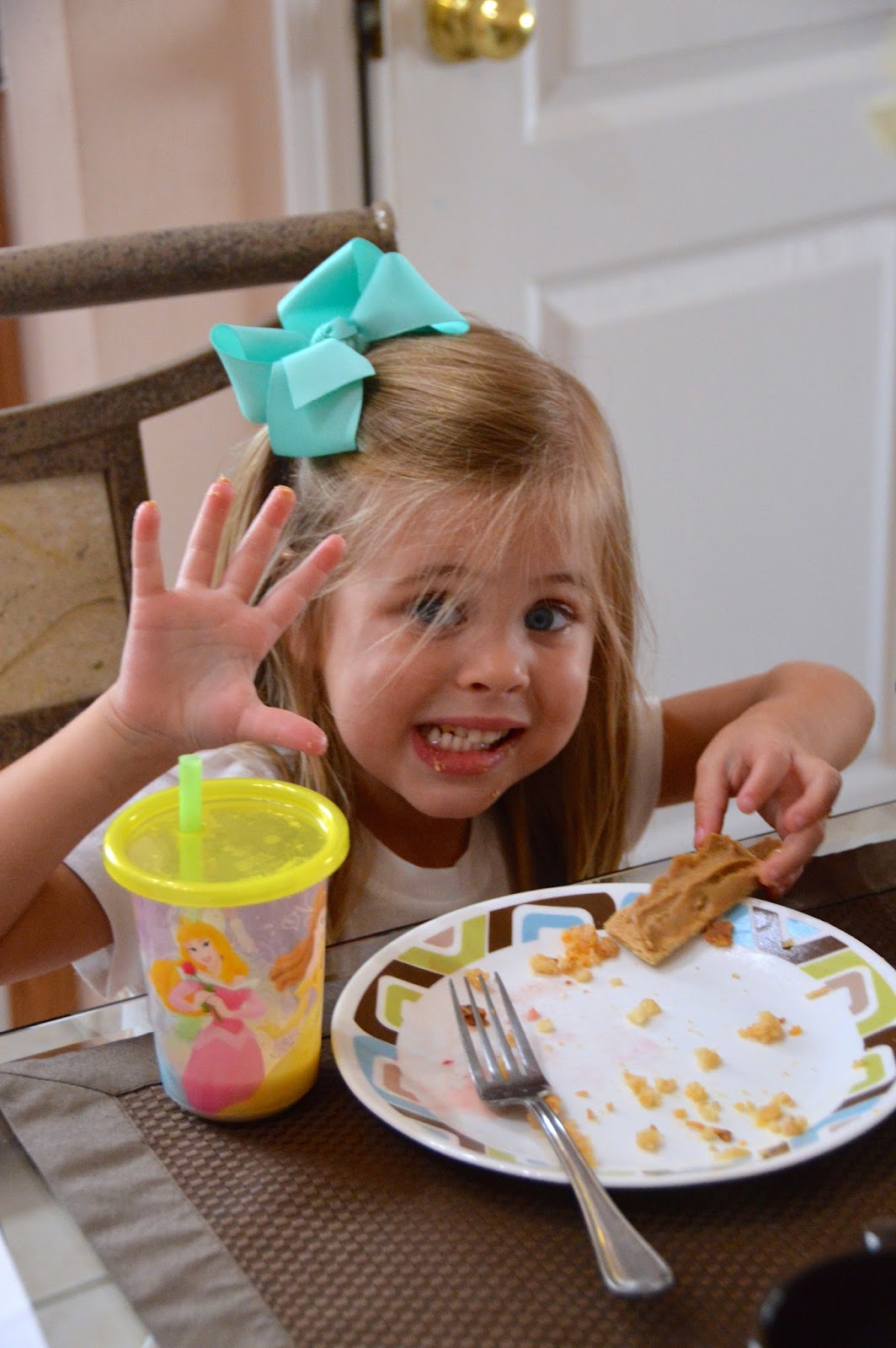 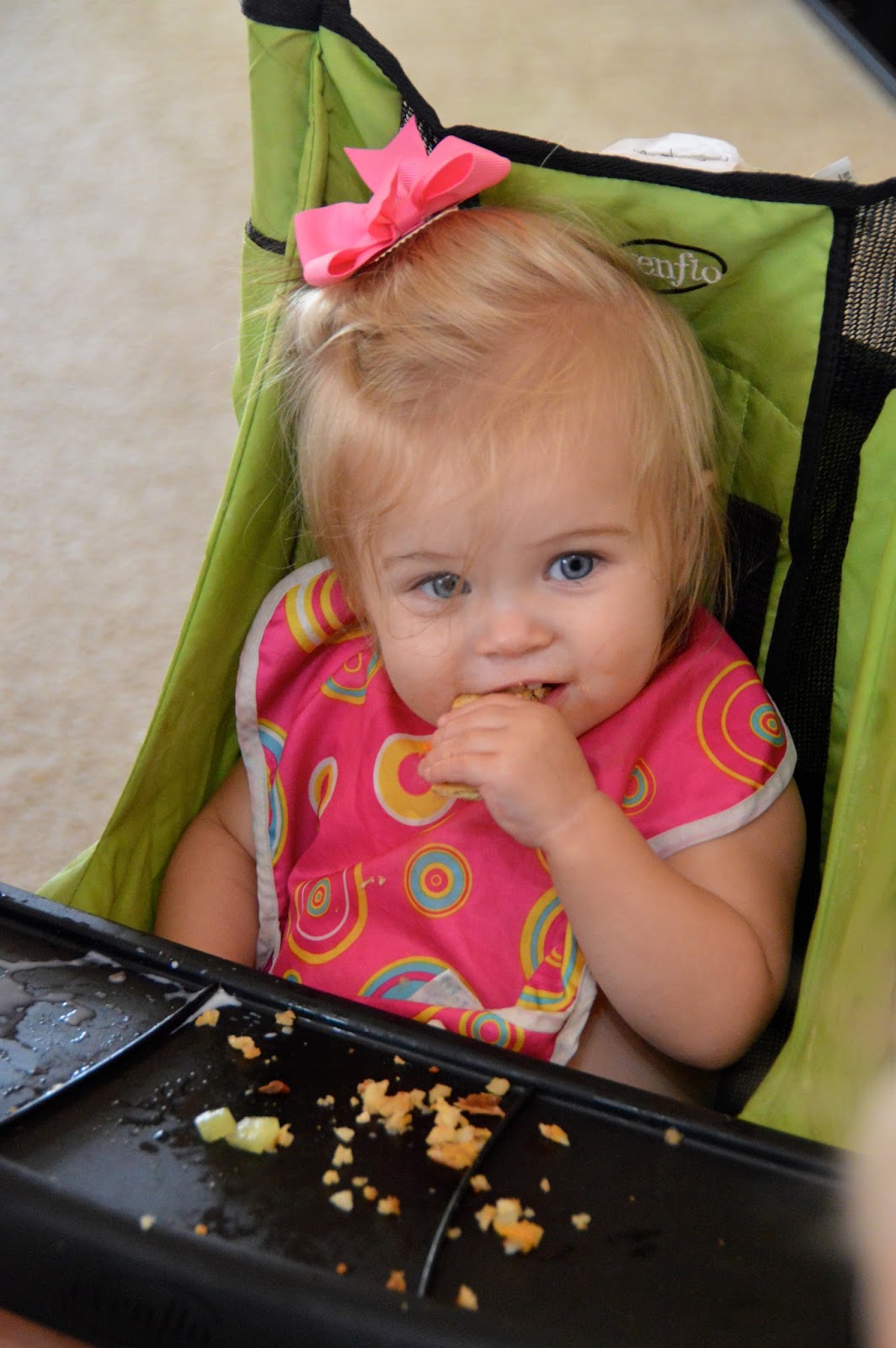 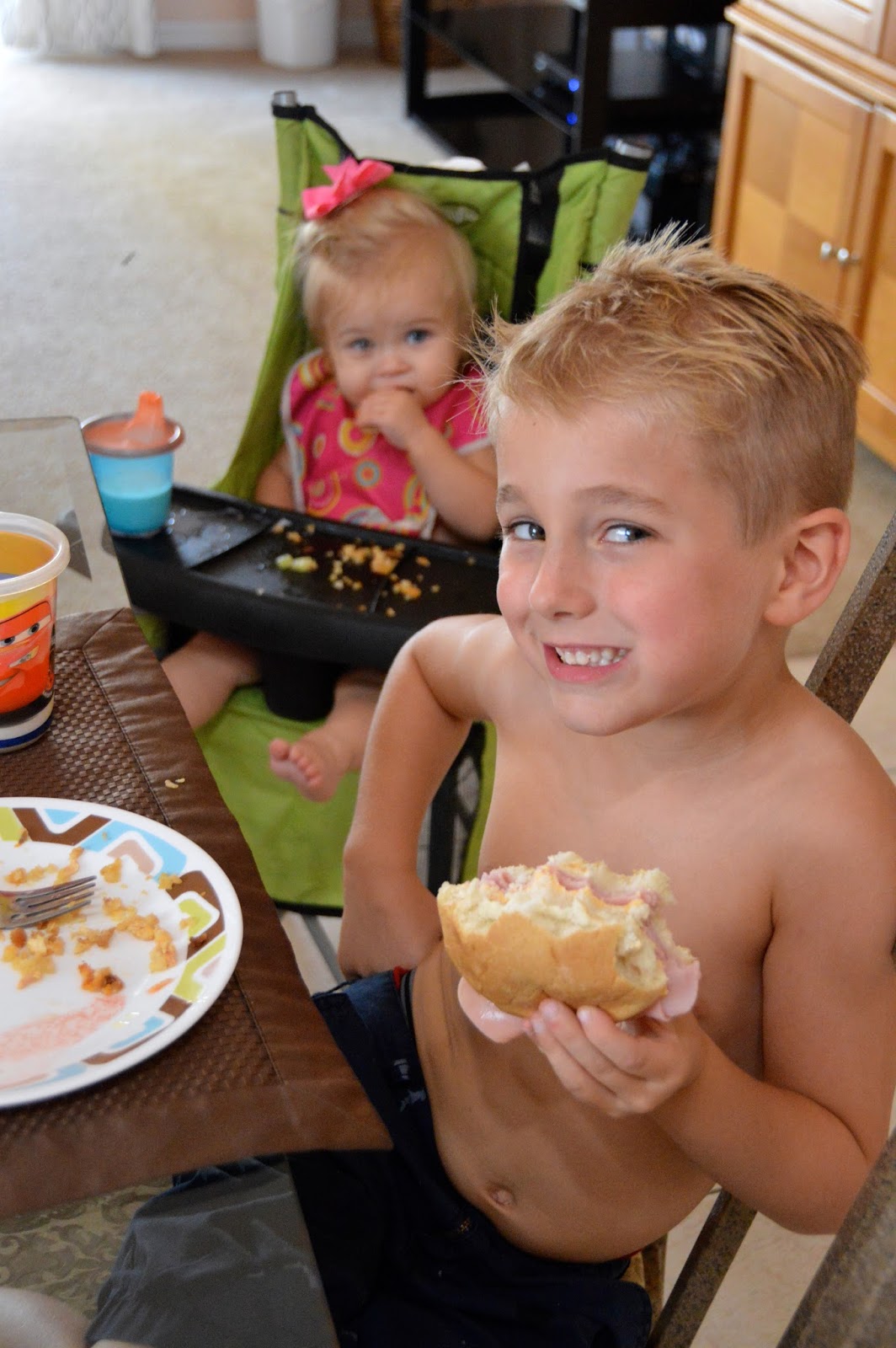 Huge tubs in both master bathrooms! The girls loved it! 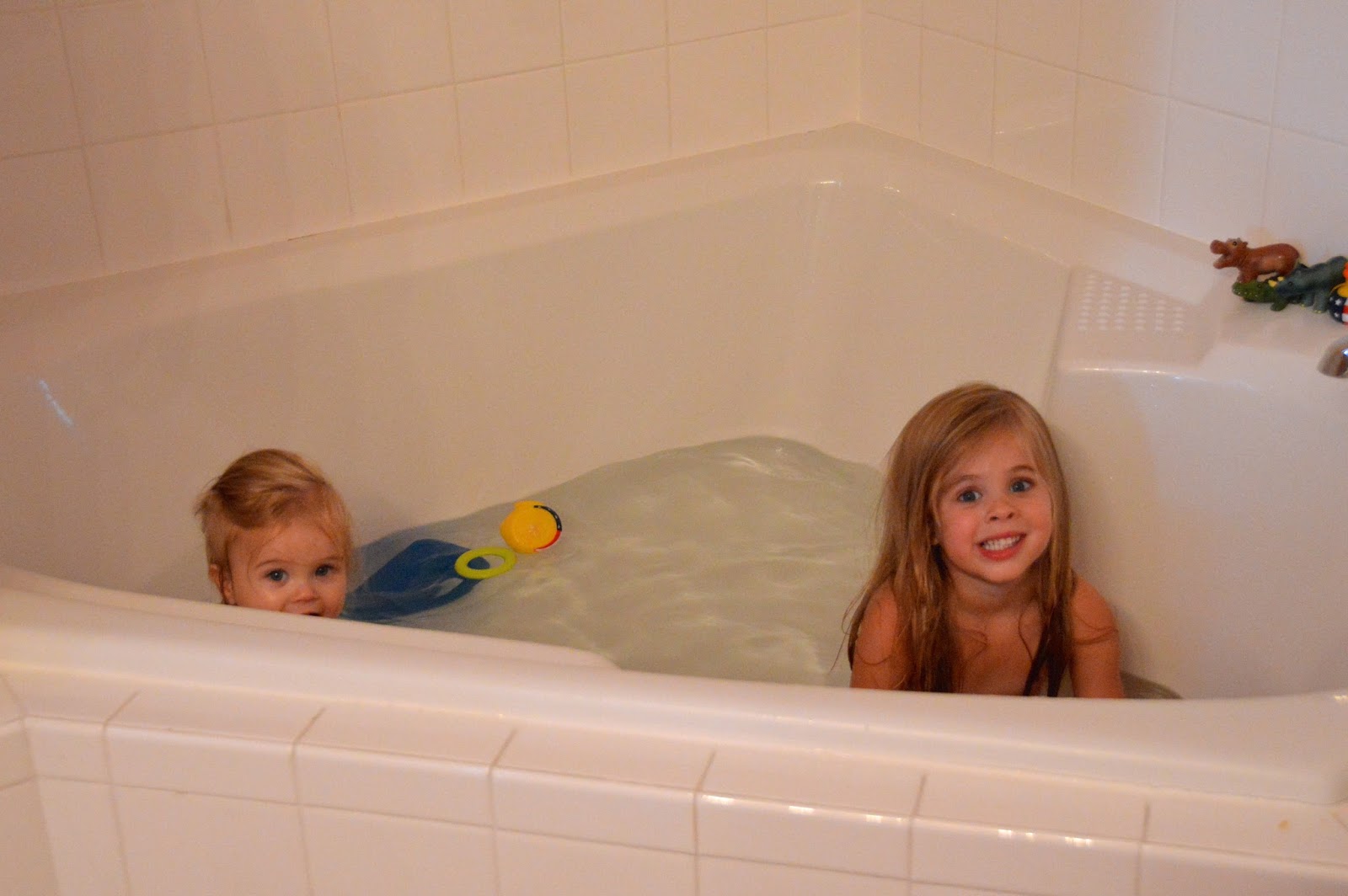 The Bacon crew met us down there and stayed with us for the duration of the trip. How’s this for a trade off? We invited them to come with us and told them we’d pay for the accommodations if they would keep Tess for us during our day at Disney. It’s a total win-win plus we all got to spend a lot of time together AND Casey was able to celebrate her birthday while on vacation! The house was a GREAT size for us all and it wasn’t cramped at all. One of the master bedrooms had a huge closet so we ended up having Casey and Jordan take that room (with Carter in the closet) so our kids could all be spread out. While Kye and Britt LOVE to sleep in the same room on vaca, we had a PACKED weekend and needed them WELL rested which often doesn’t happen when they share. Plus the bedrooms were split between levels…we took the master upstairs, Tess had a room upstairs, and Britt had the other room. We trusted Kye the most with the downstairs room and Casey and Jordan also were downstairs. 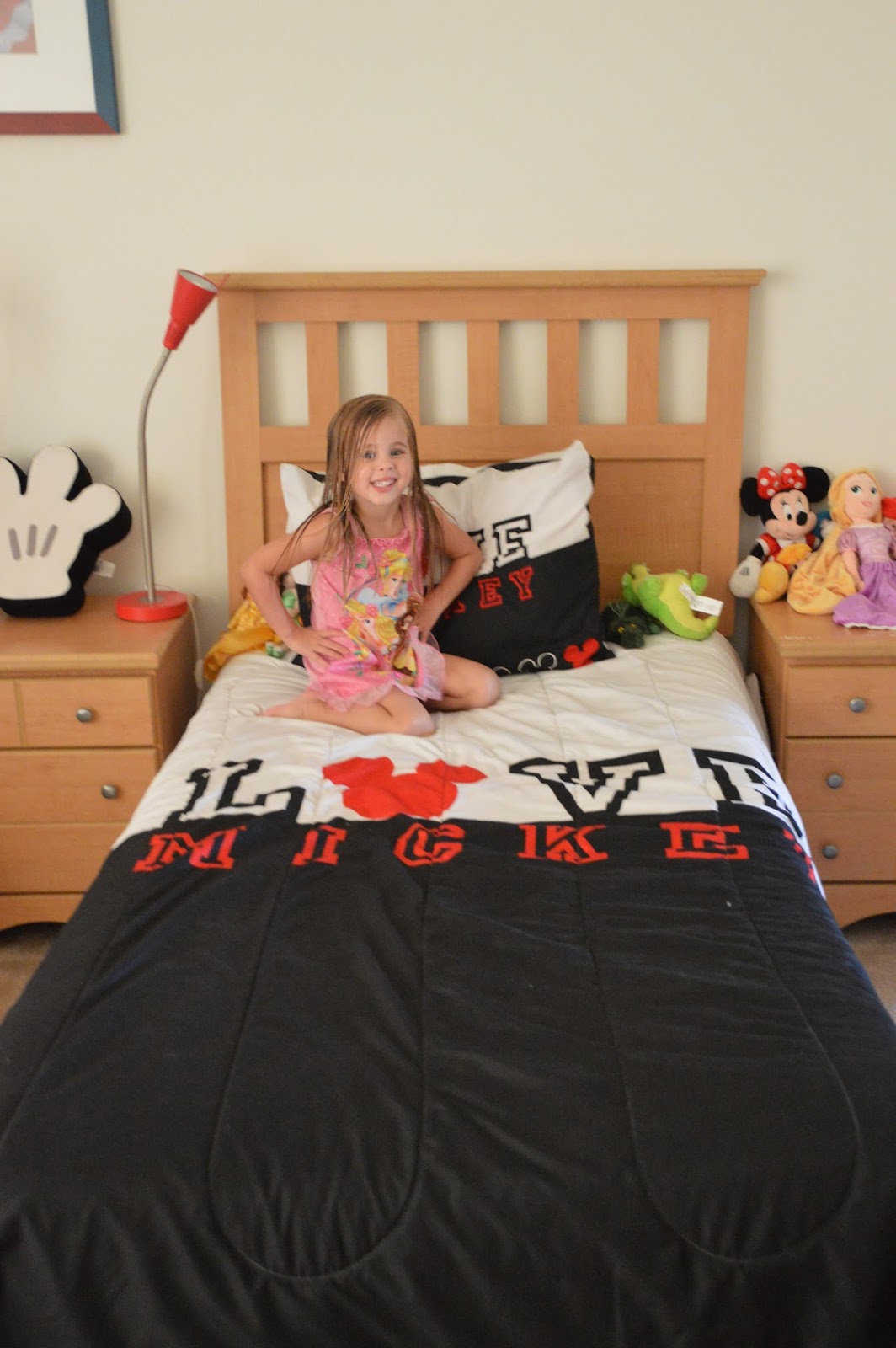 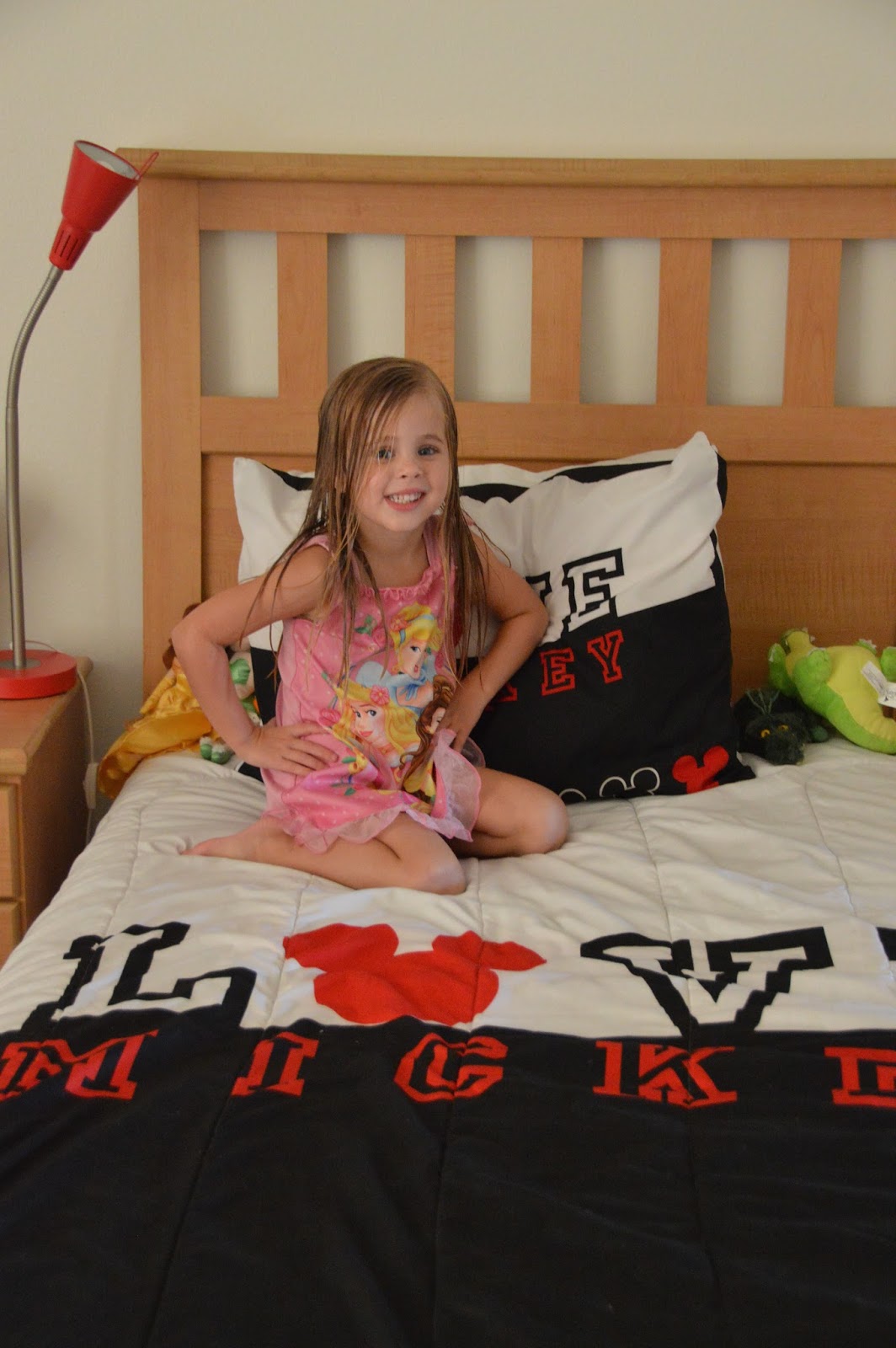 Our new vaca tradition: the kids get to sleep with TONS of “friends” Kye took it literally and slept with them ALL (we also always bring along all our Disney themed stuffed animals when going to Disney World) but Britt had hers all set up around her bed rather than in it! 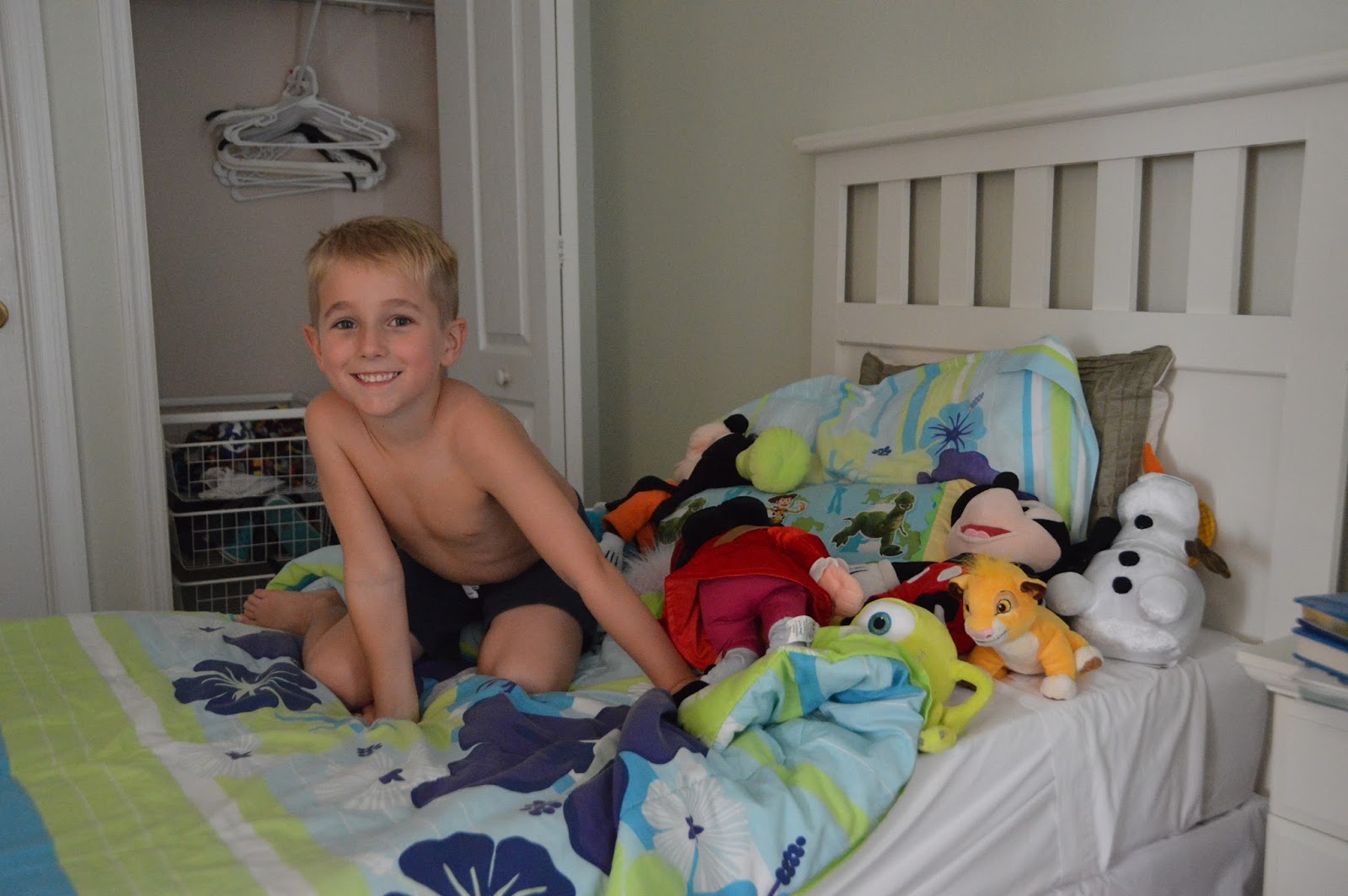 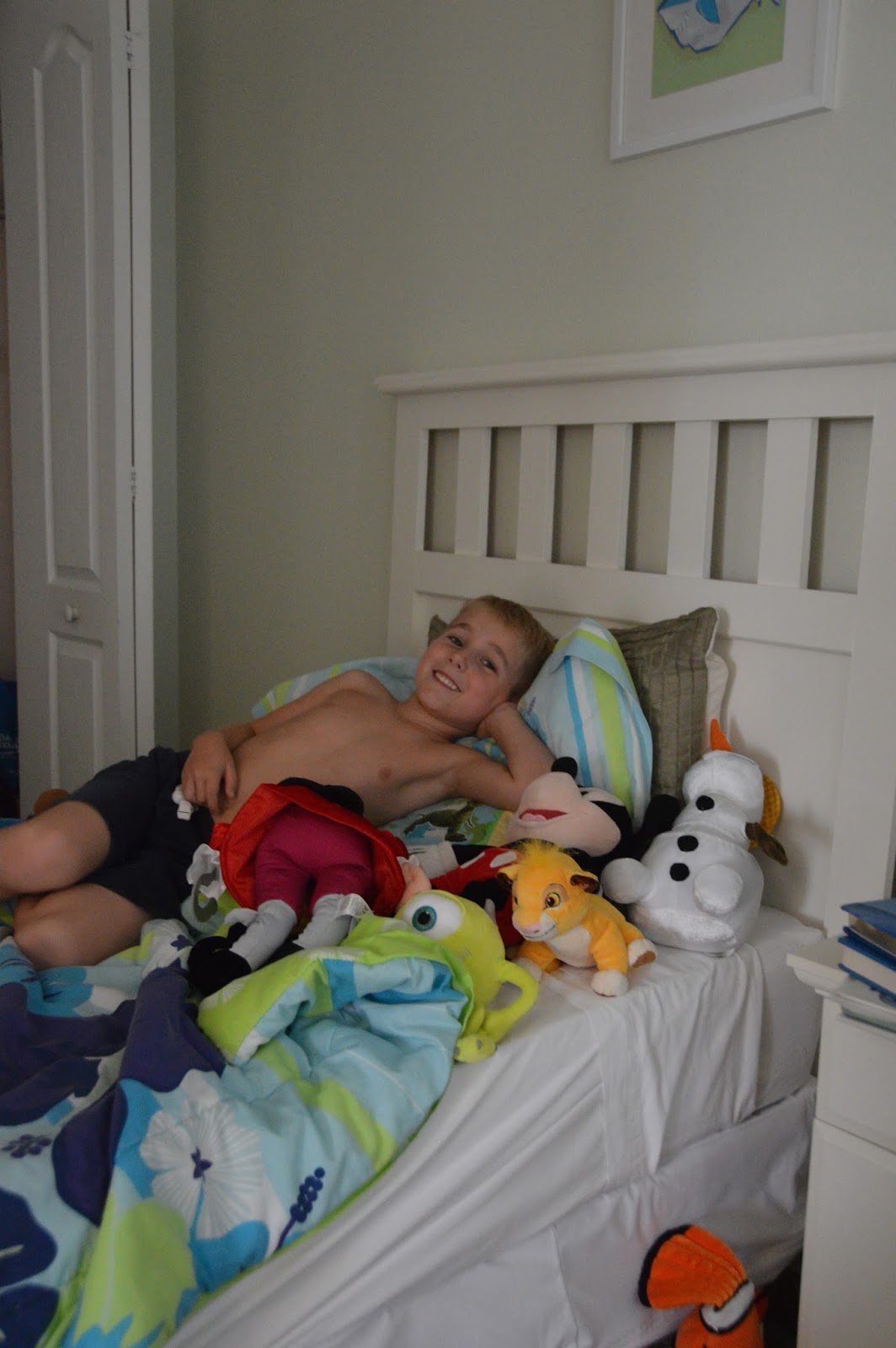 Casey and I didn’t realize that football comes on Thursday nights when we planned the trip…so the boys got food and watched the game (I think Georgia Tech played that night which is Jordan’s team) and Casey and I went and got dinner as well as picked up groceries for the weekend. I didn’t bring the crunk-ness like I normally do (duh) and I felt bad that I was kinda emotional during our dinner but I’m so blessed to have such an amazing bff/sister in Casey. She “gets me” and doesn’t mind the occasional emotional (letting my “gifted” show as she says) moment 😉 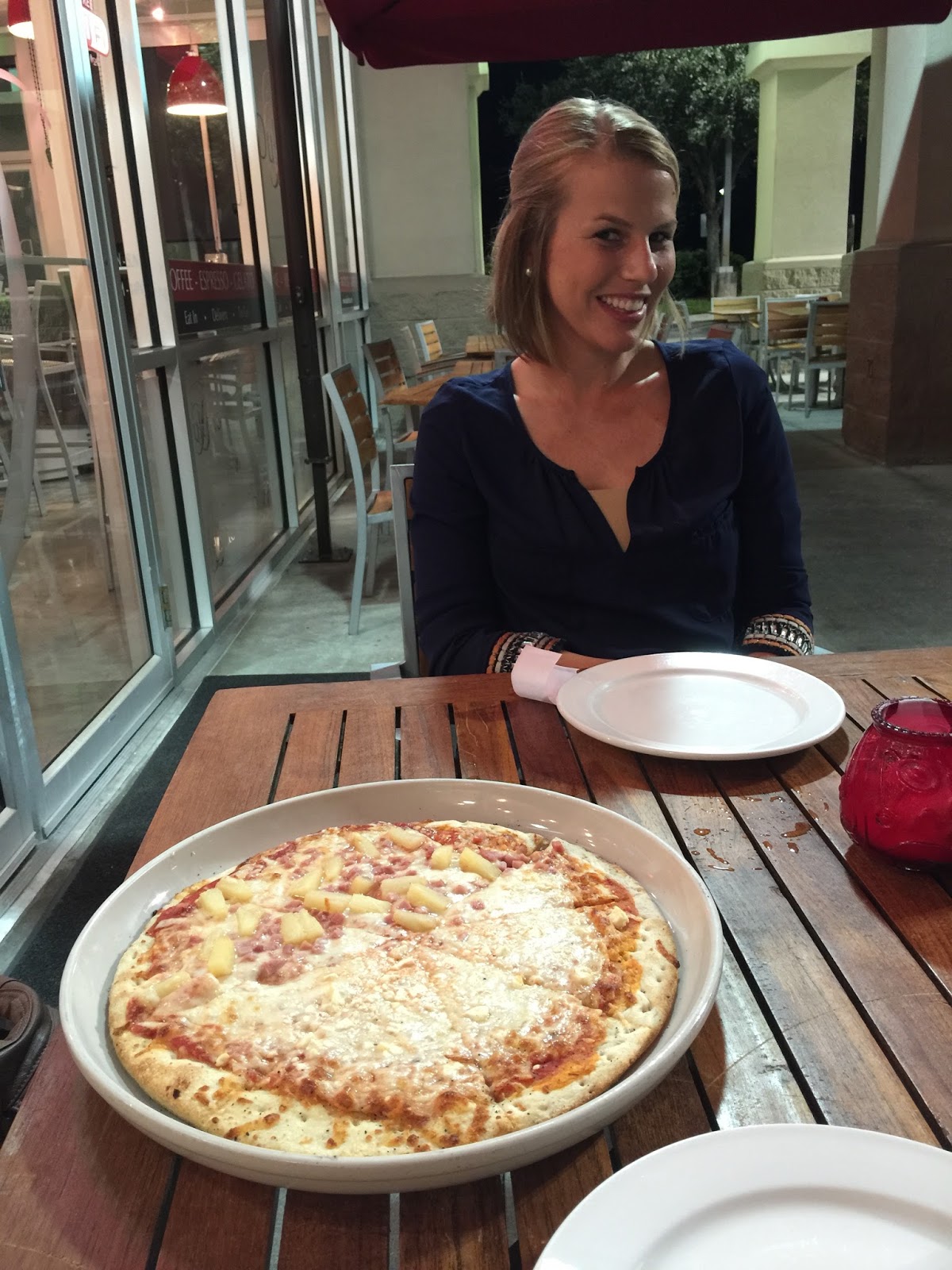 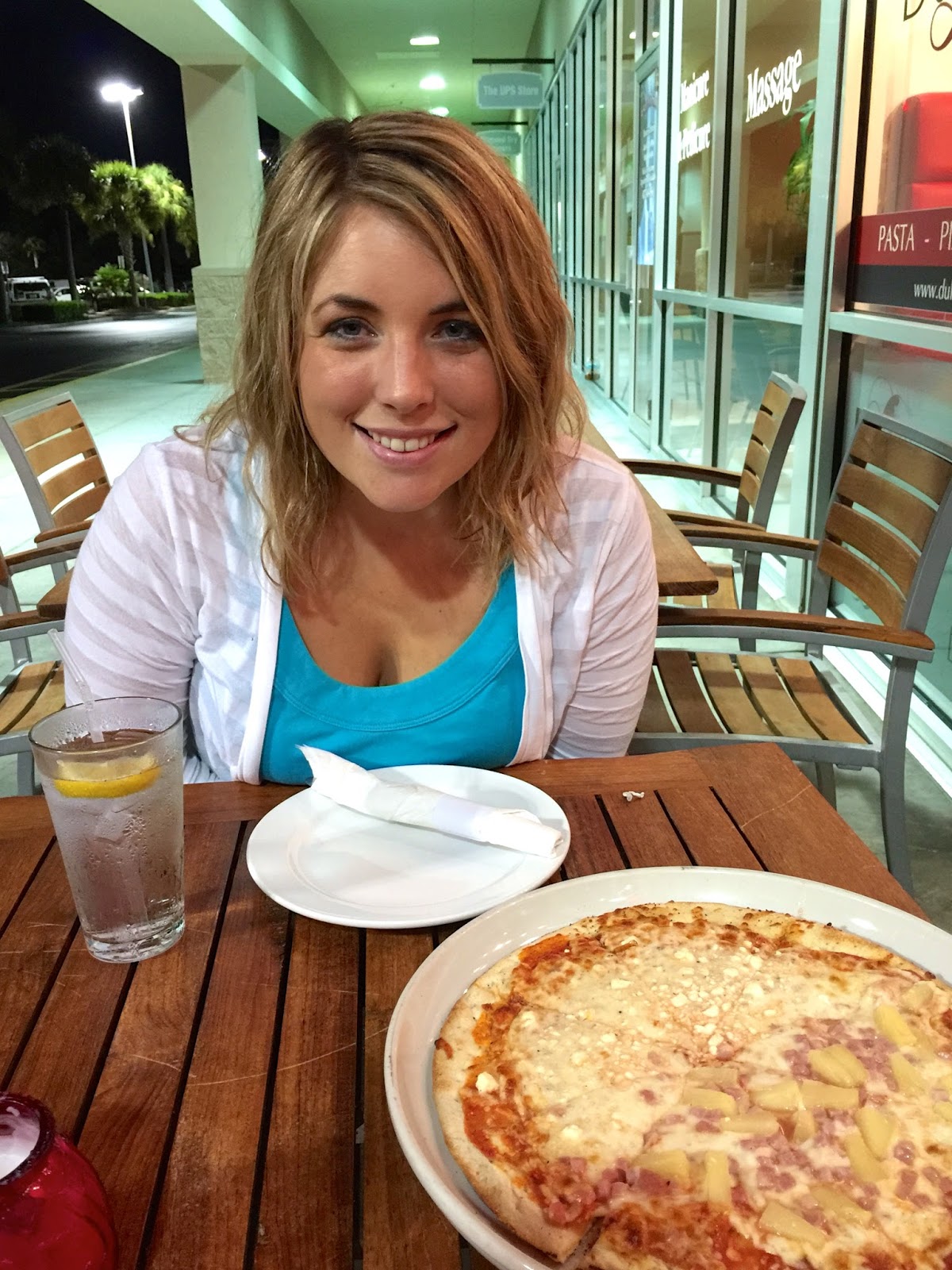 The crowds were supposed to be lowest that Sunday for the park so we planned to go Sunday but then as it got closer things changed and the crowds appeared lower on Friday. Luckily Casey and Jordan didn’t mind switching the day that they kept Tess and we went ahead and had our full Magic Kingdom day on Friday!

We don’t do “prizes” at the parks and instead I find little presents for the kids ahead and time and they open them prior to leaving that morning. I have special Disney themed totes I reuse at each visit 🙂 I usually try to get them something that they can use that day! 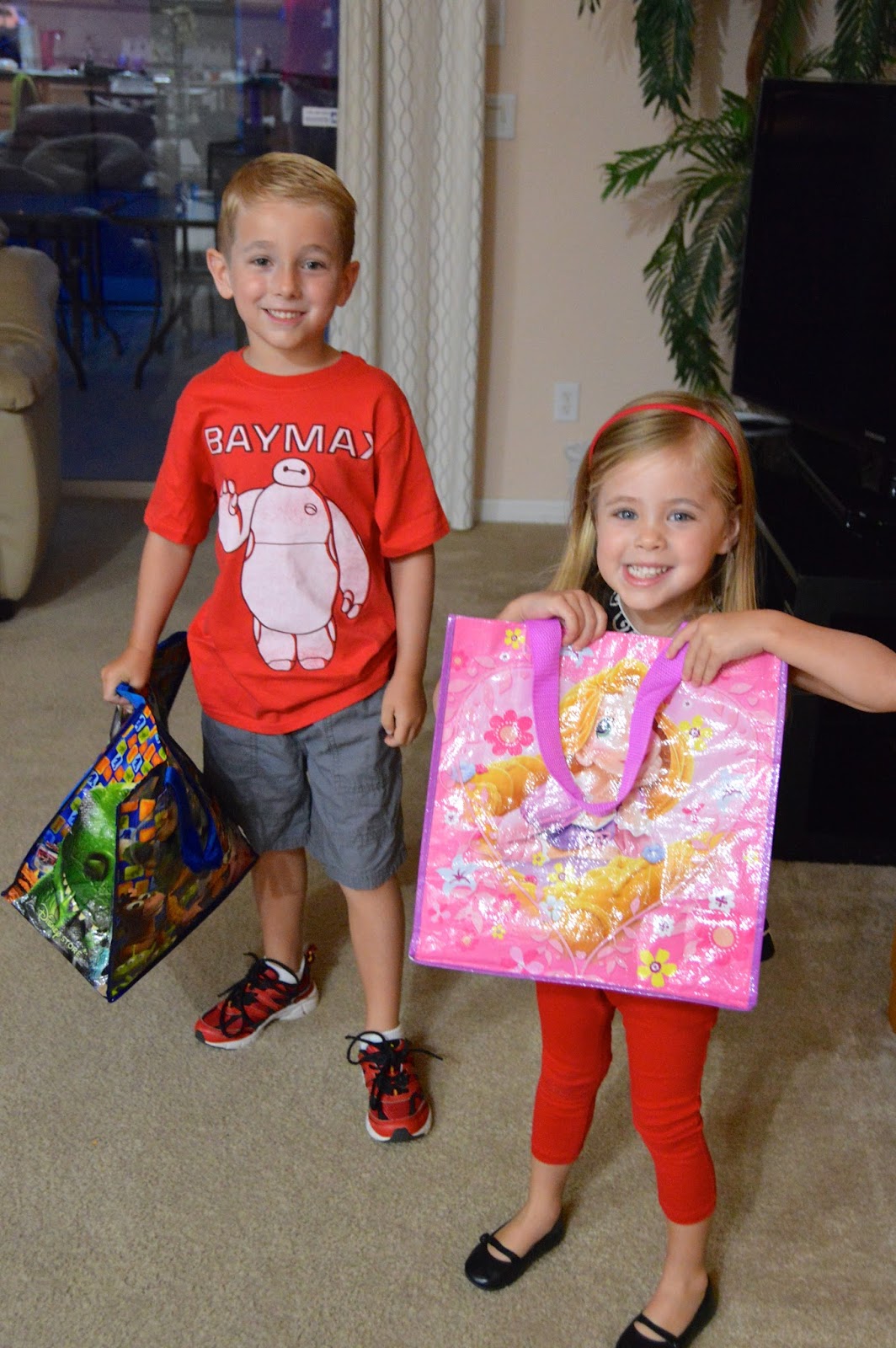 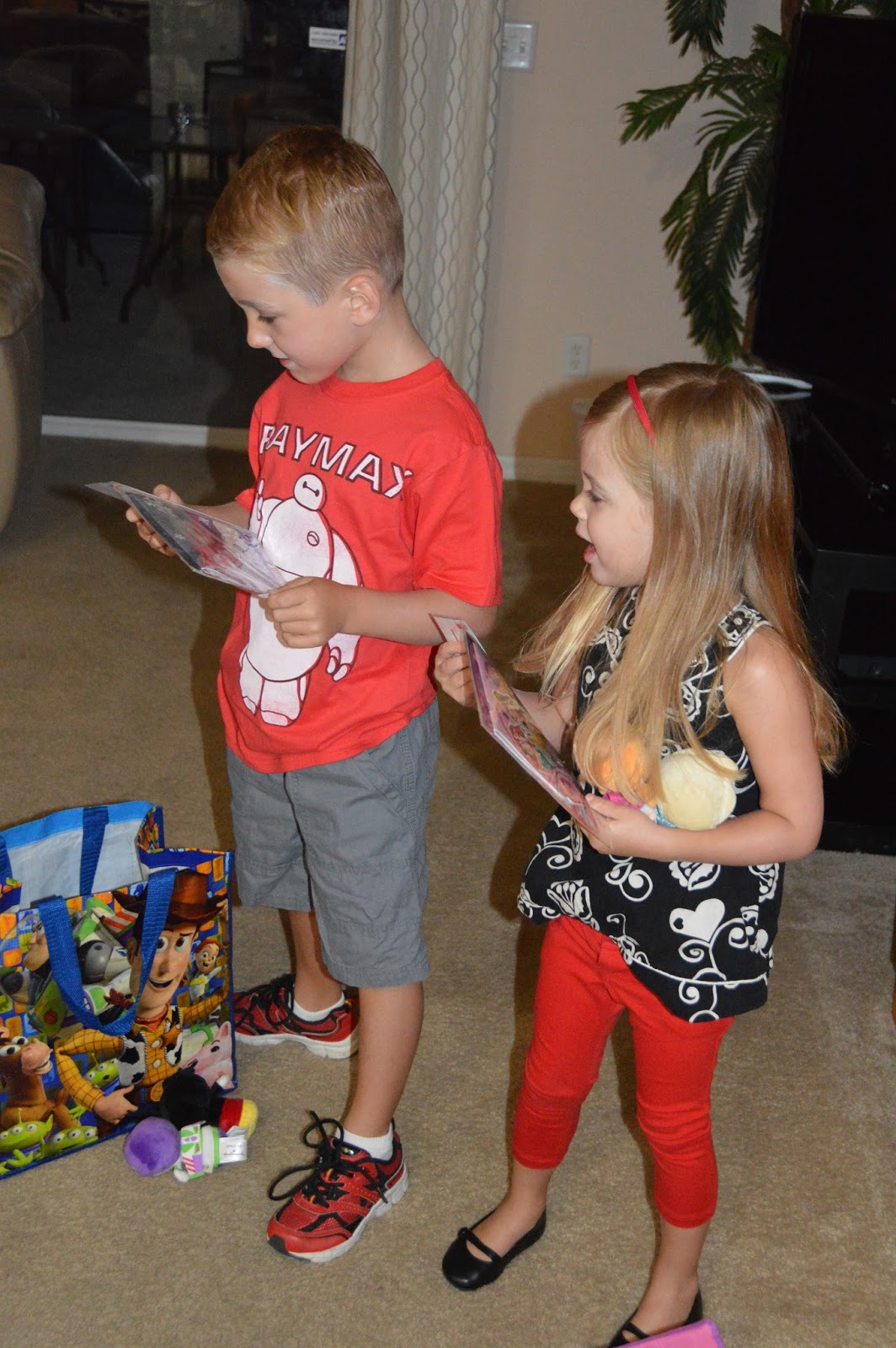 This time I got some sticker books and some of the Hallmark Itty Bitty’s. Britt had been specifically asking for Elsa and Anna ones. Man, Disney was SMART having TWO princesses in a movie. Double the money we have to spend on merchandise! Of course if I got Britt two I had to get Kye two too and I couldn’t leave Tess out either (she was still sleeping when we left but we gave her a Rapunzel one as her “Disney present” when we got back). Those Itty Bittys are NOT cheap. I mean still way way cheaper than buying stuff at Disney parks…but I plan on waiting on some coupons before getting Britt additional ones she’s asked for for Christmas! 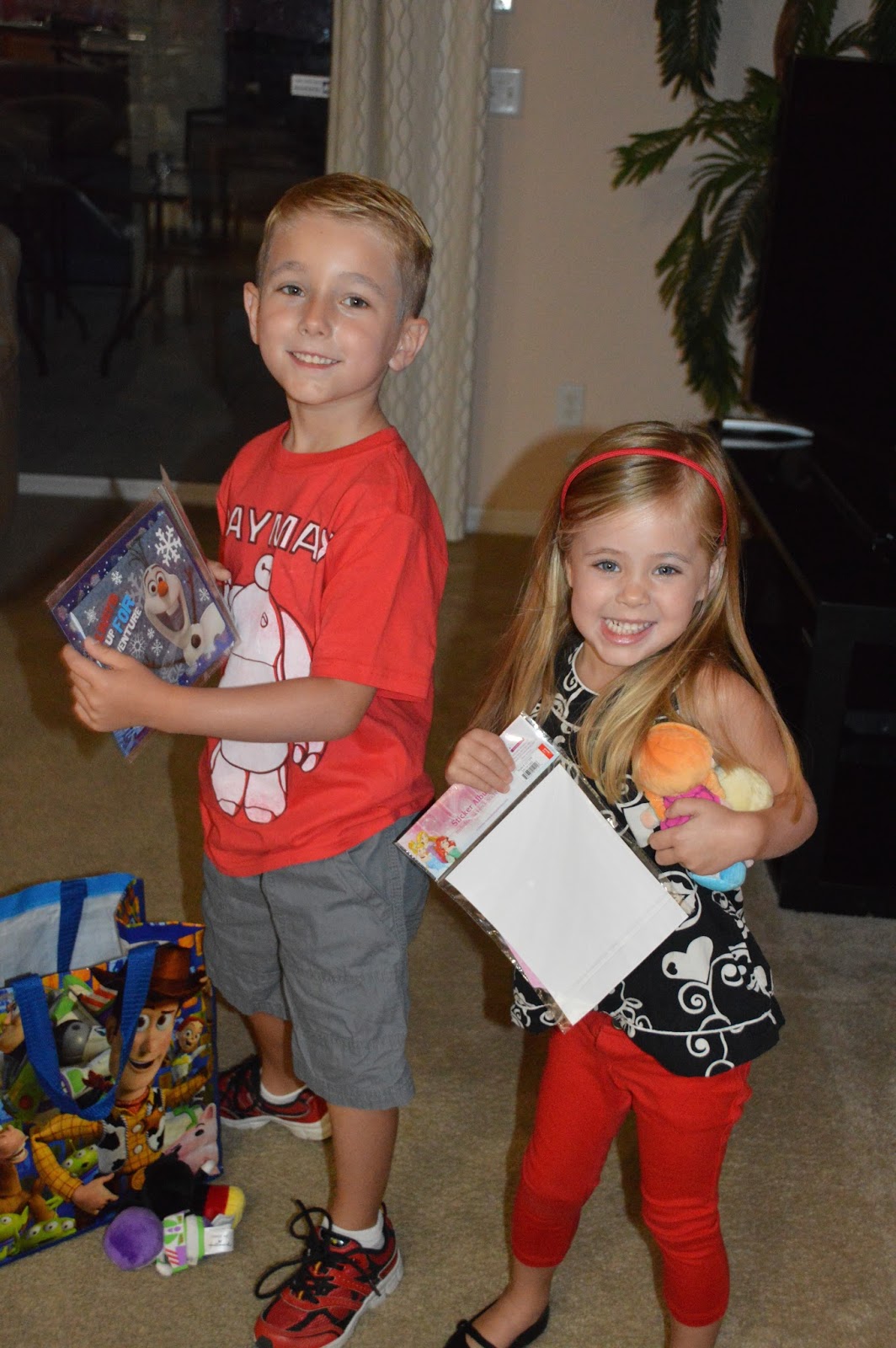 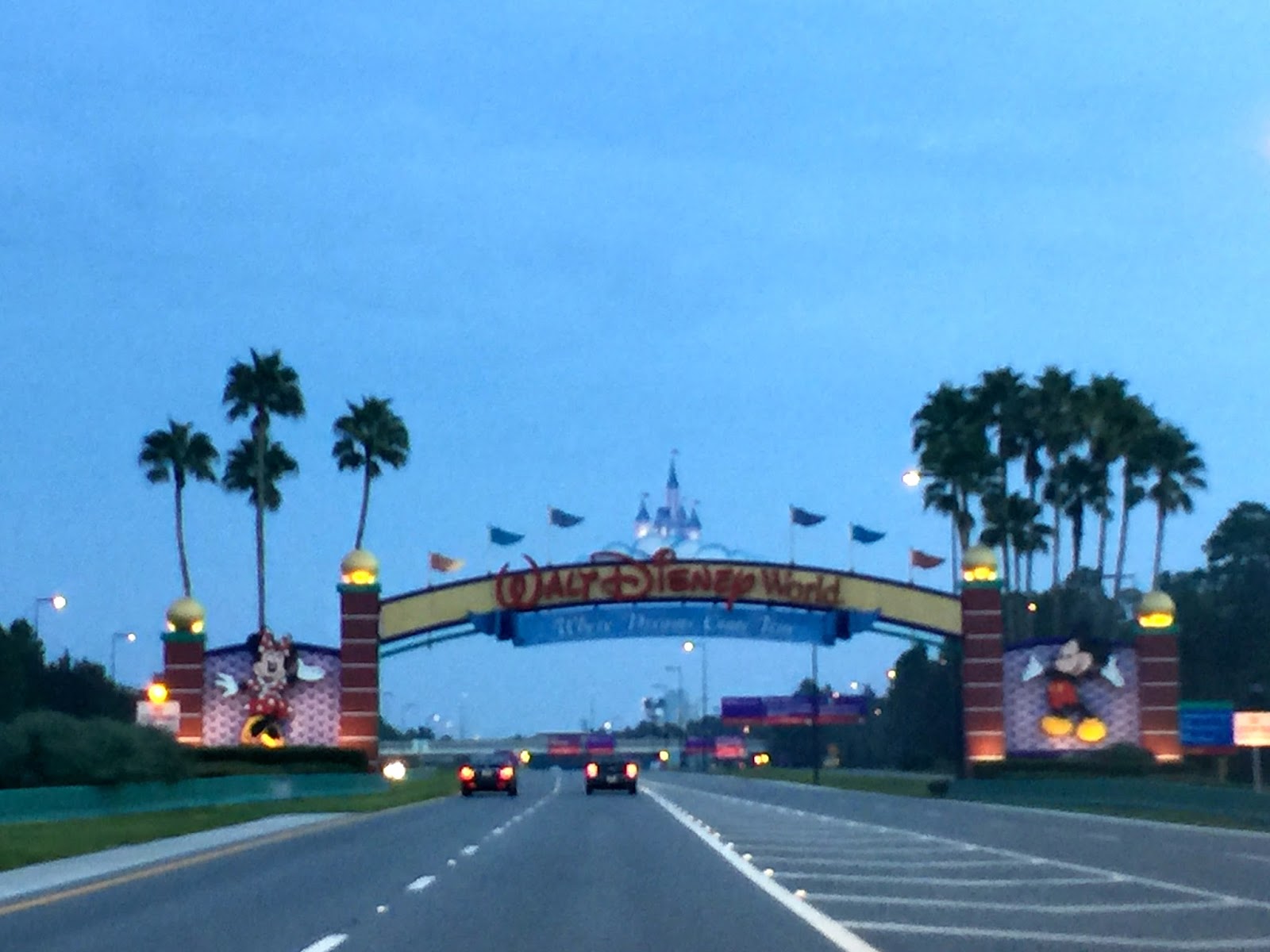