While the guys were enjoying their golf lessons at Sea Island on Friday us ladies decided to take Kye for his first “swim” in the pool!!! I wished Zach could have been there but I was excited that Gramma got to be part of yet another first for her grandson! 🙂 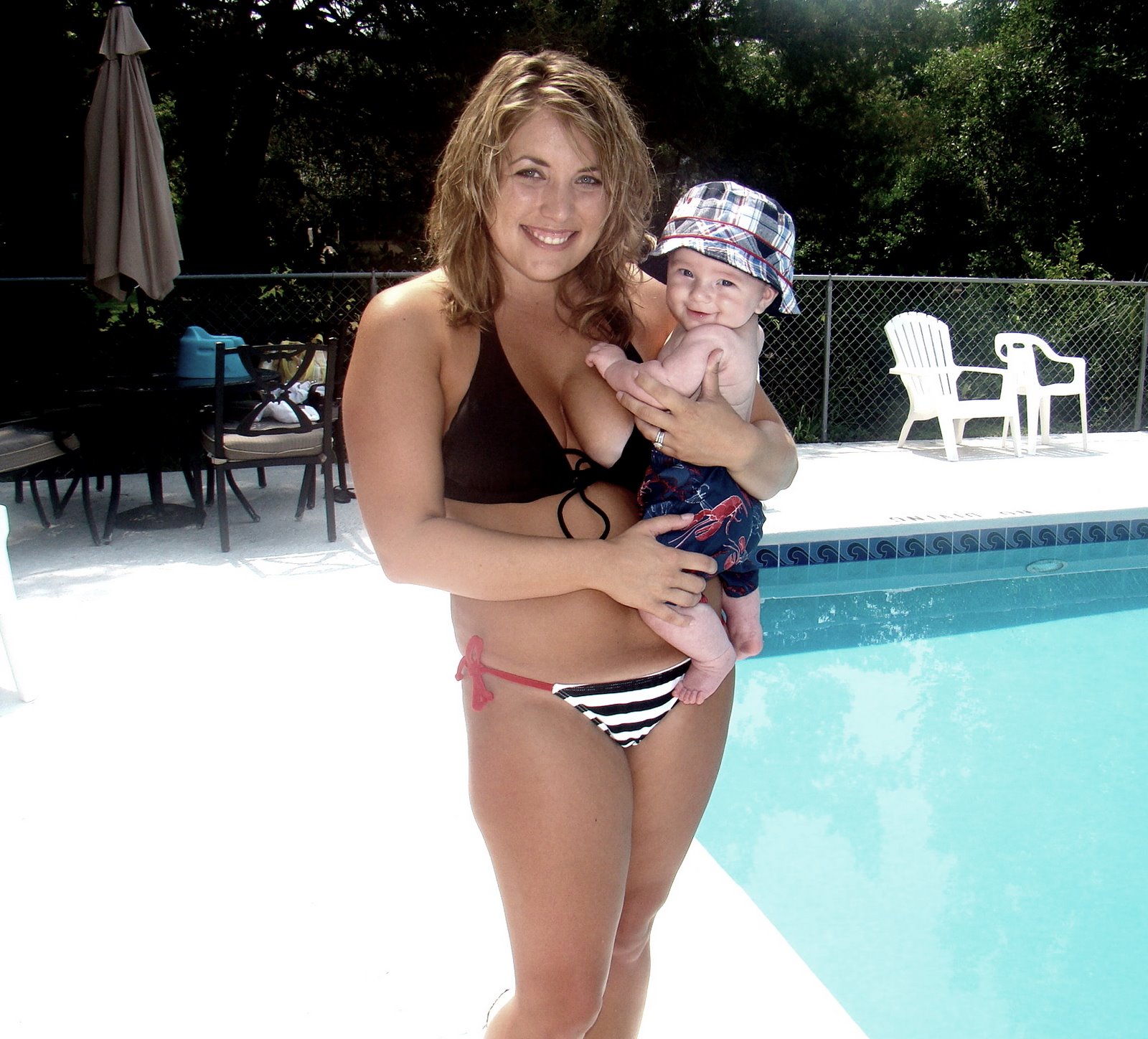 We got this sun shade float thing that was A PAIN to blow up!!! I was a little worried since he can’t sit up on his own yet but he REALLY liked it and the pool water was as warm as a bath so he enjoyed that too! 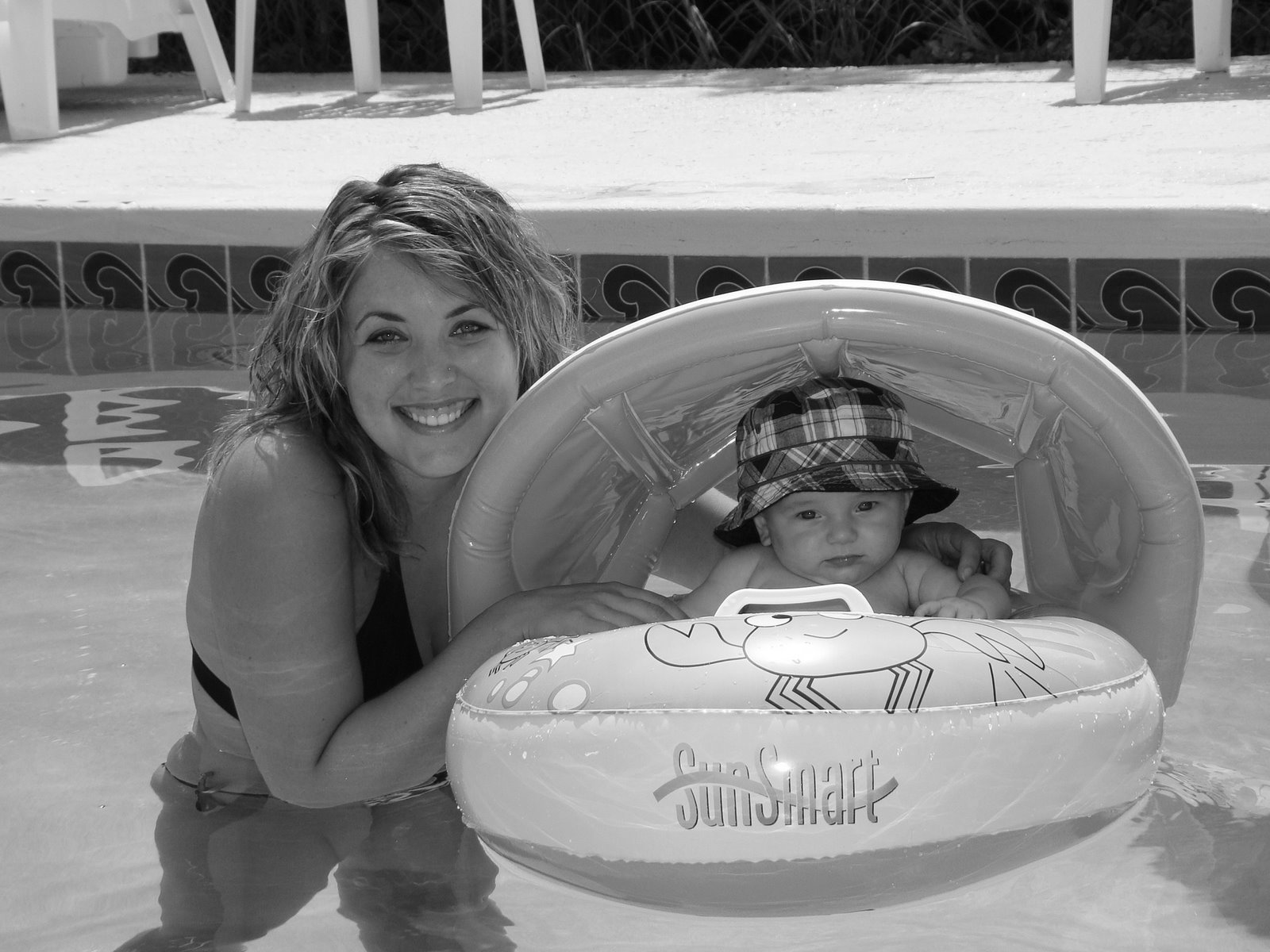 And it really did create awesome shade over him too! 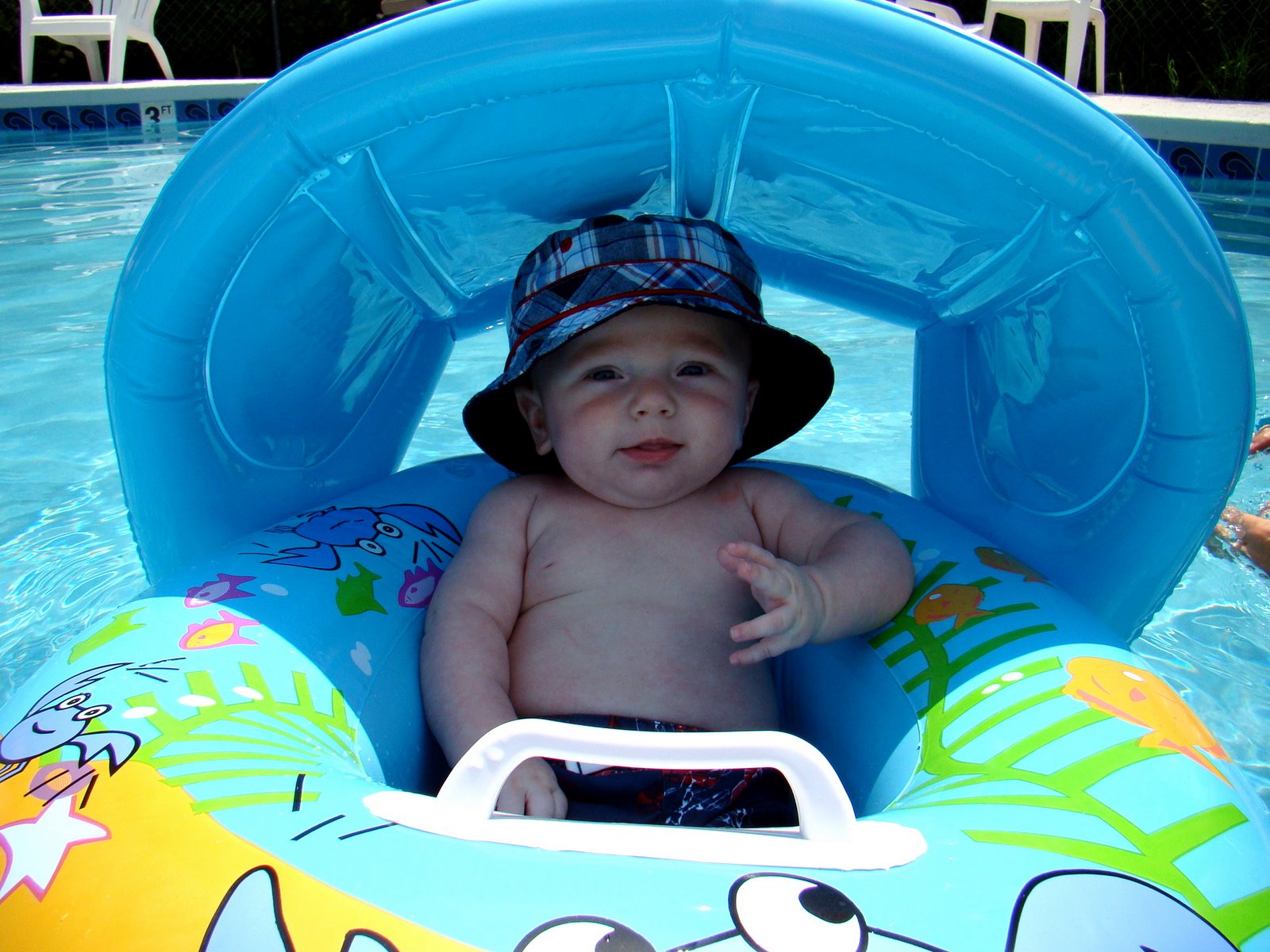 Can’t you tell he has such a loving Gramma? She was so excited to play with him in the water. It was really precous! 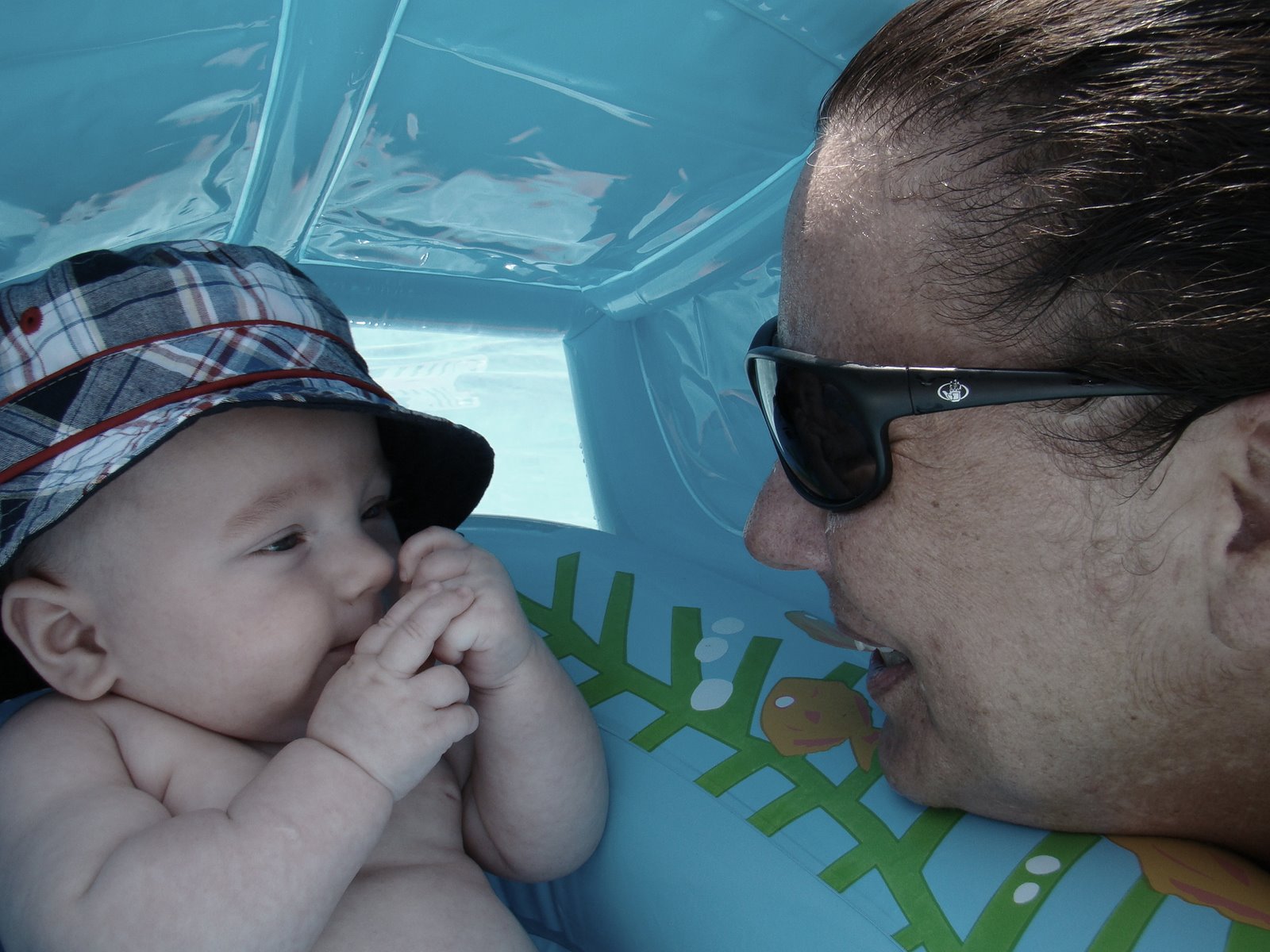 This is the ultimate relaxing summer picture! I like how the float allowed him to stay dry and just his feet were in the water. I think it was a good introduction for him so he didn’t have to do too much at once 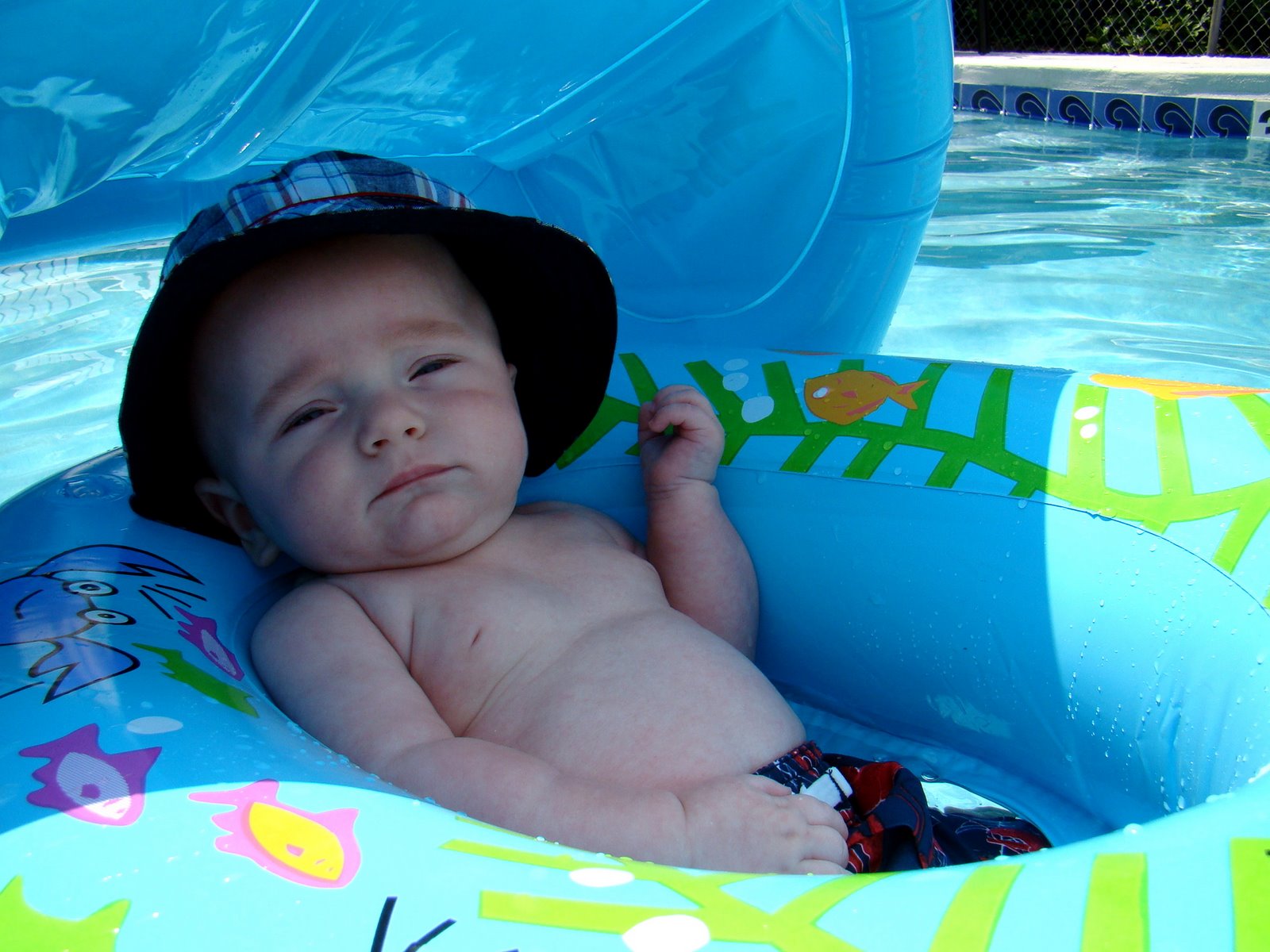 He started getting fussy with the float after about 10 minutes. I think the leg holes may have bothered him so Gramma took him and let him dip a little in the water. He LOVED it! I’ve heard of babies (coughSteviecough haha) that bawled when going in the pool but so far so good for Kye liking the water 🙂 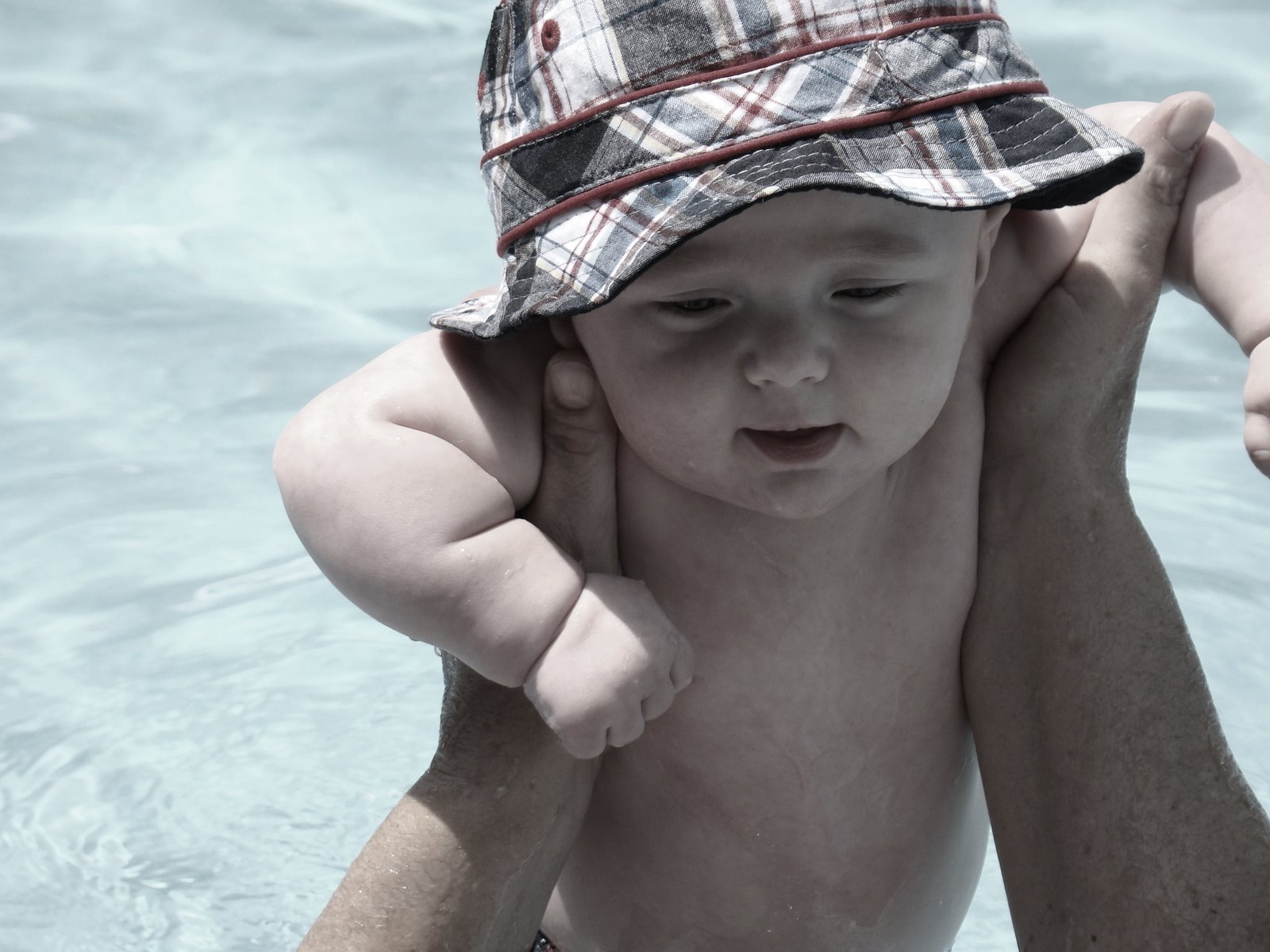 I love his happy smile! 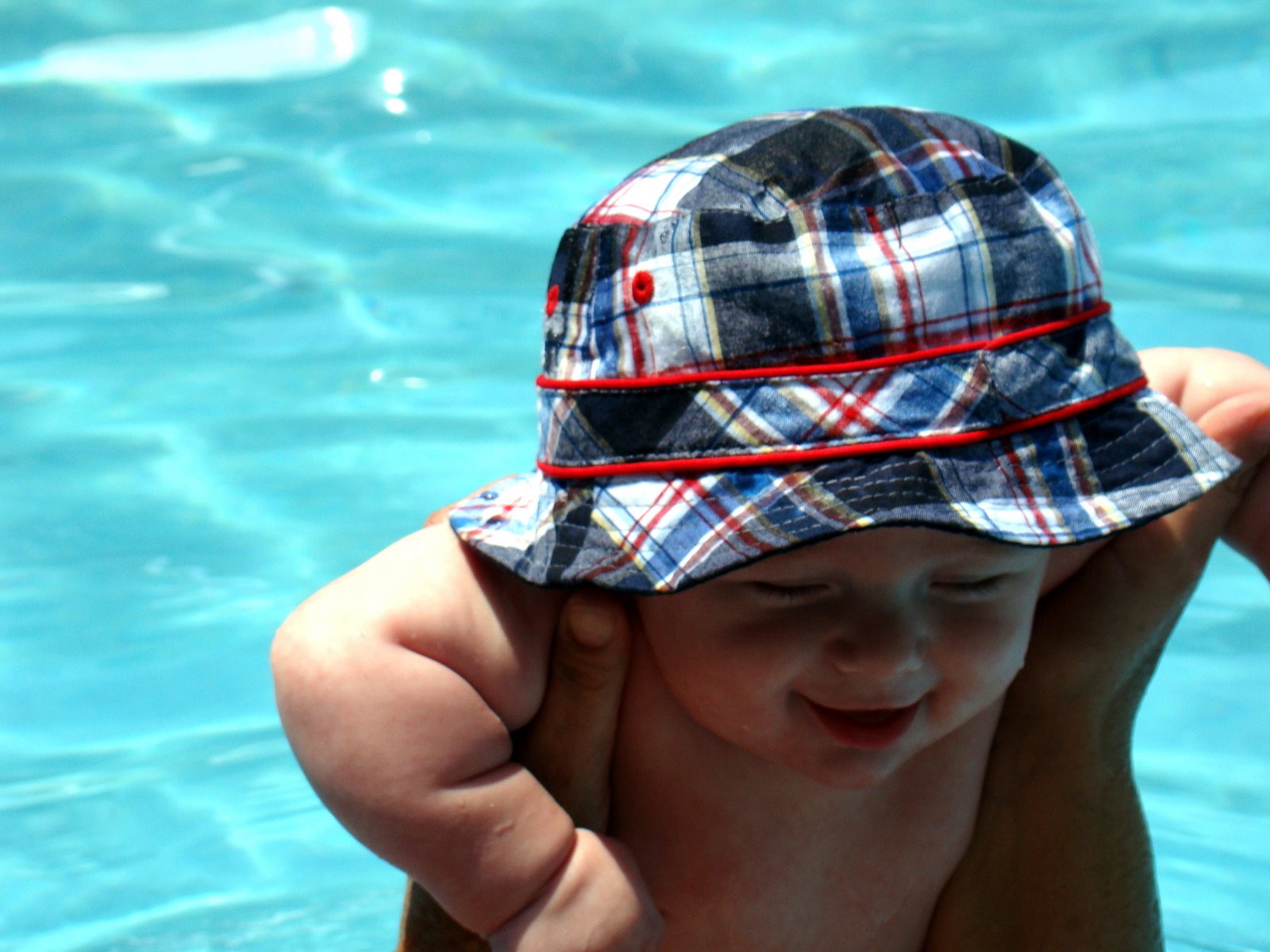 Afterwards I rinsed him off very good in the outdoor shower they had so that way the chlorine would be gone. Then I put him in his bumbo chair under an umbrella thinking I’d be able to lay out with Mom and Chrissy for a little bit…at first he didn’t mind it. 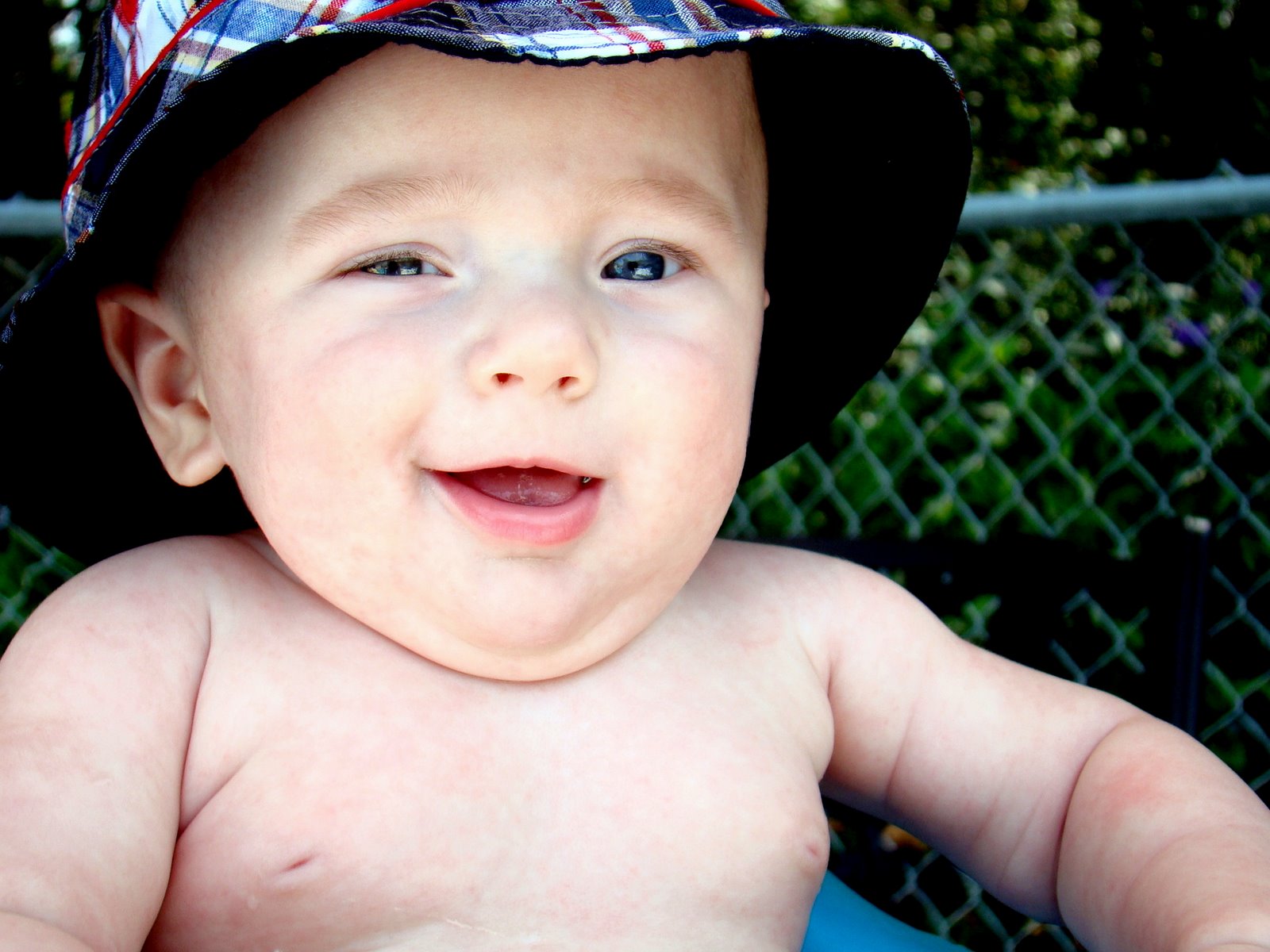 But he pretty quickly got tired of it! I think getting him wet first wasn’t a good idea (but I was too pumped to wait)! Because he was wet and uncomfortable which wasn’t a good combo for him. We ended up going inside after only being out for about 20 minutes. He was just too fussy! 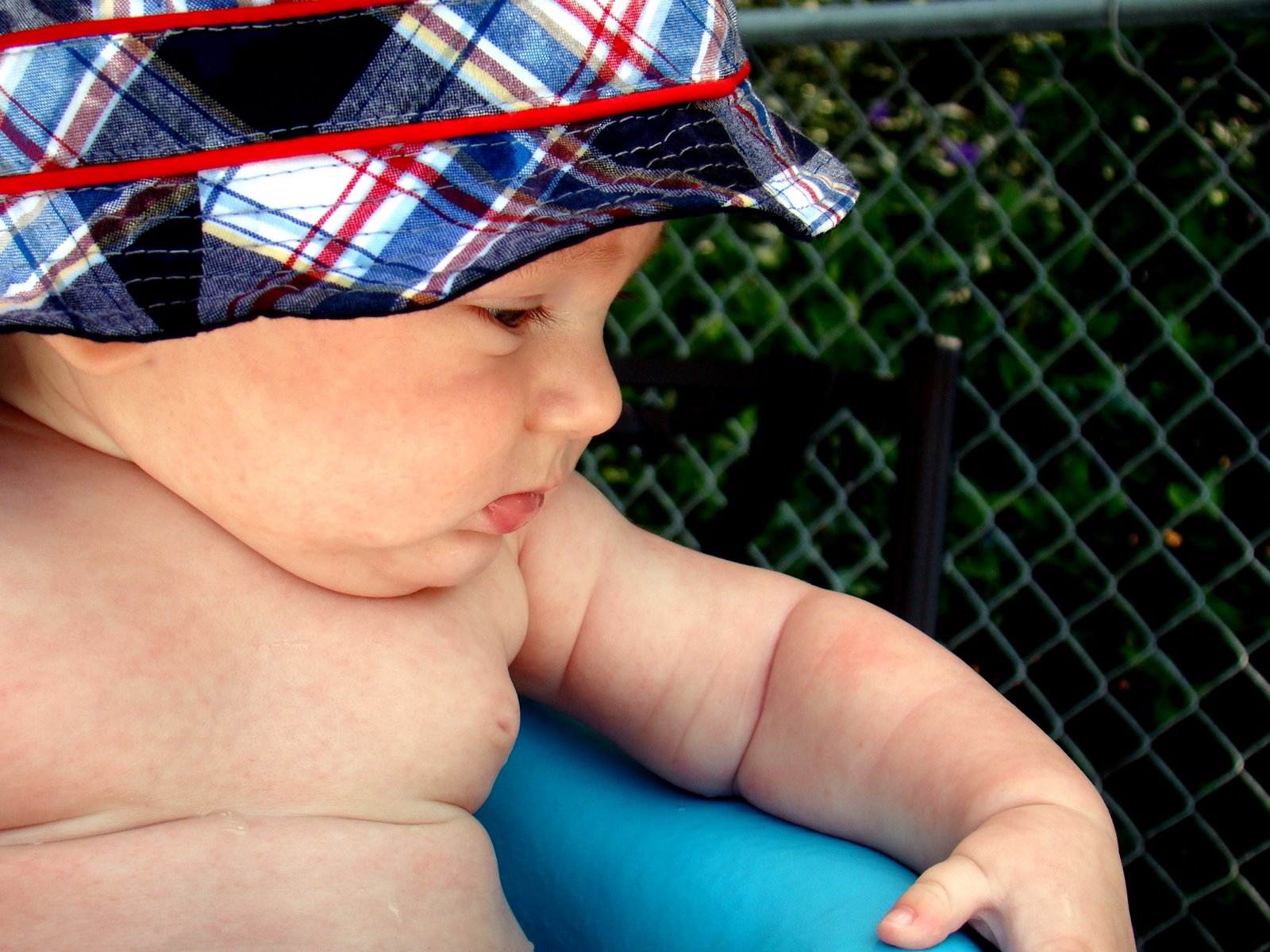 Once the guys got back Zach stayed in and slept while Kye was napping so I could go back out with Mom, Chrissy, and Brandon. While we were out there a couple was out with their baby. Turns out they were staying in the condo next to us and their baby was born ONE DAY before Kye! SO funny! Of course the mom and I swapped stories (when I said I do Babywise she said, “so you’re a nazi” haha!) and their baby was an angel the whole time. Their secret? She was in her clothes in a bouncer in the shade. We totally decided to copy their idea the next day!

Even though it wasn’t for very long, I’m glad Kye got to have his first little dip in a pool. I LOVE to swim and hope to someday have a pool in our backyard so it’s pretty important that he likes the water and the more you expose them the better 🙂 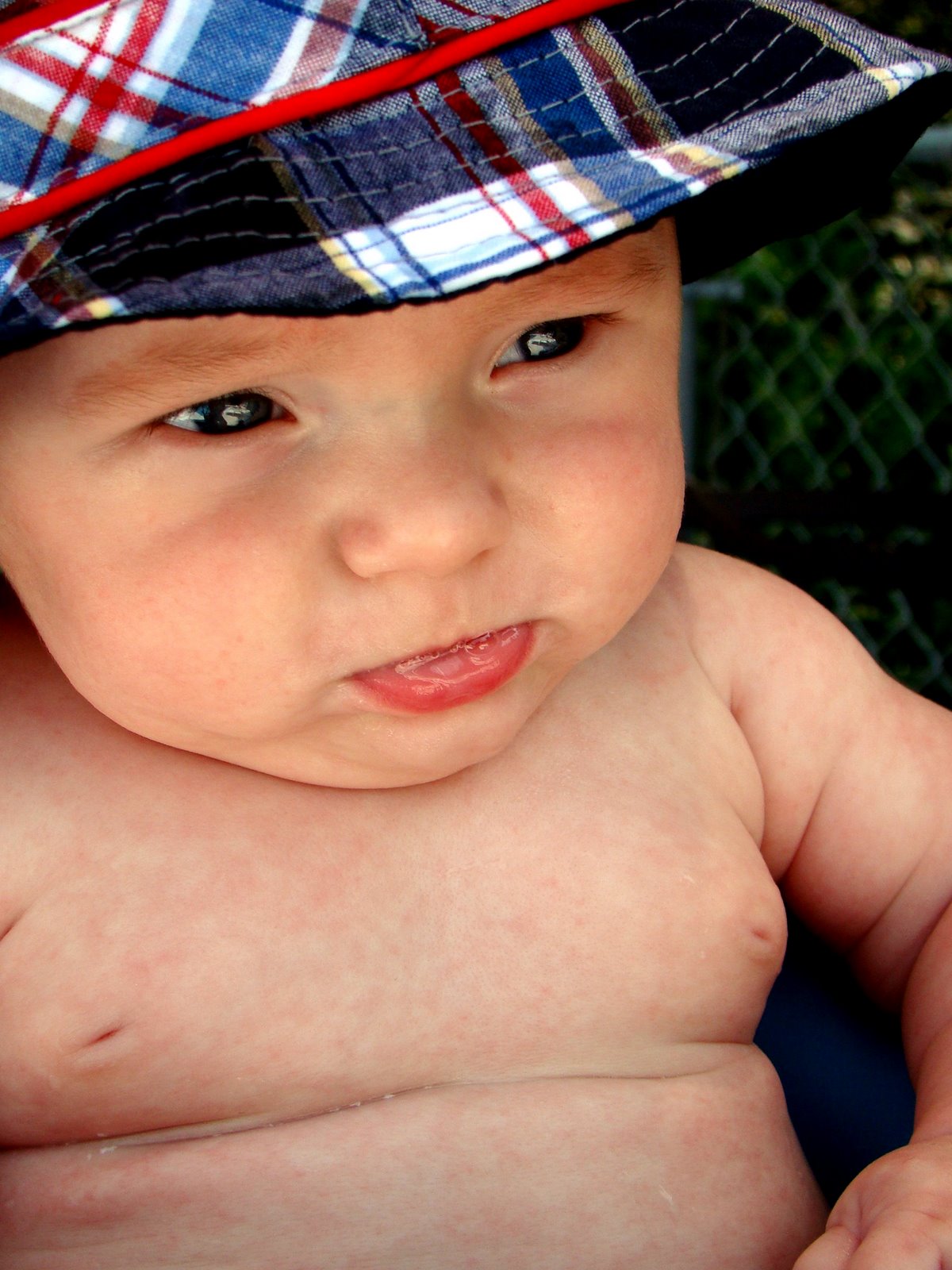