We live in Valdosta, Georgia which also happens to be Sport Center’s Titletown, USA. It’s some HARDCORE high school football down here people! I’ve never been a big football fan but did love the days of watching Zach play…since then though…notsomuch. However, I realize we live in a place where football isn’t optional and while I will NEVER pressure Kye (or allow anyone else to pressure him) to follow in his Daddy’s footsteps I will go along to the games that Zach wants to go to.

Friday night was the first Lowndes HIgh School home game and Zach’s cousin, Cole Parker, is the starting quarterback! It’s a HUGE deal and he’s been on the front page of the paper, been talked about on the radio, and is basically a little celebrity around here now! Of course we wanted to go to support him on his big night!

(going in the stadium for his first time!) 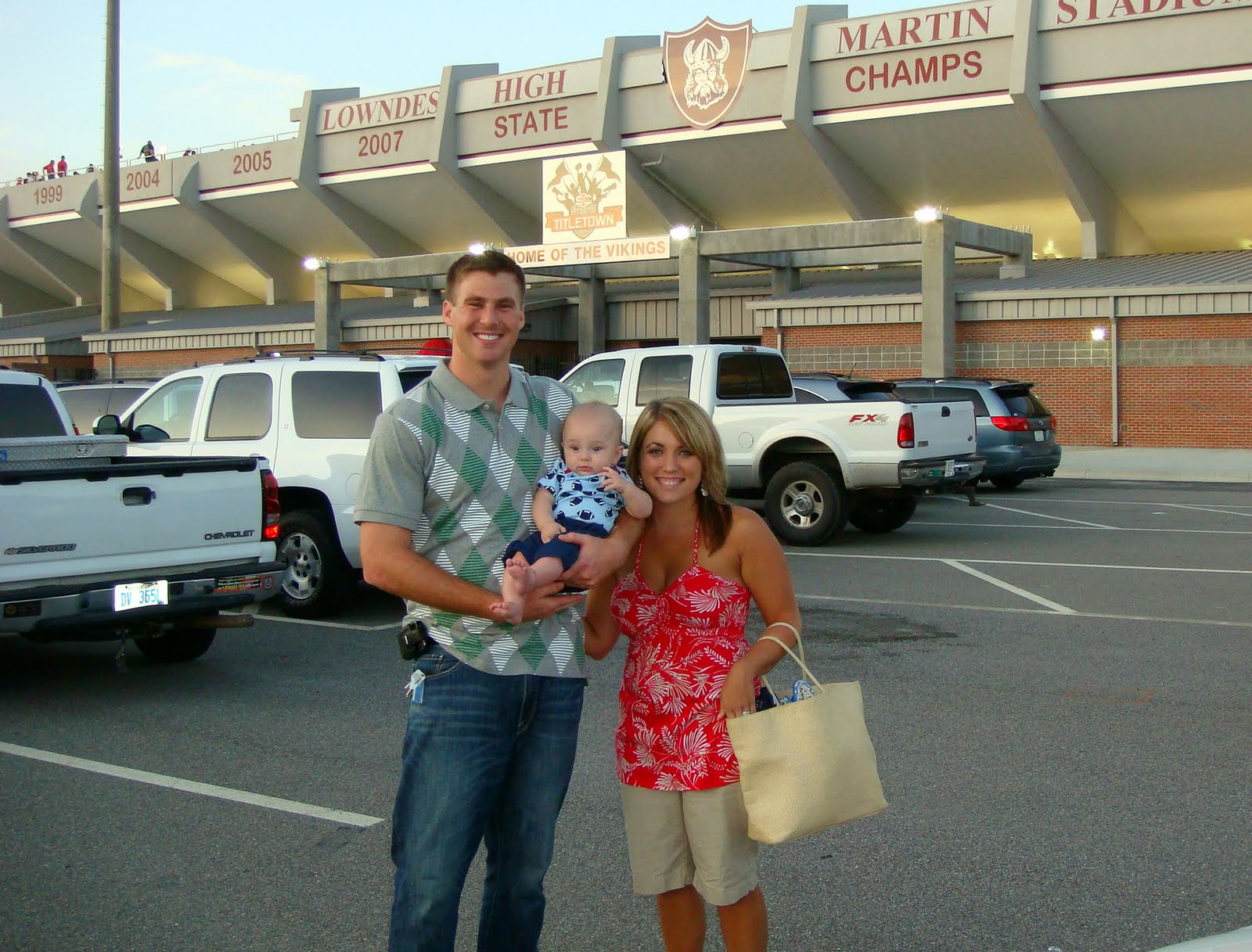 I bought Kye some cute little football onesies for the season and triedto get as “excited” as I could for the night while secretly hoping that a) it’d downpour and be canceled b) that they’d get blown out so we could leave or c) that “we’d” be winning by so much that Cole would get benched and we could leave.

Even though I’m not a big huge fan of the sport, that wasn’t why I had a sinking feeling all day. That feeling? It was guilt. We were choosing to go to an event that started at the time Kye should be getting in the bed!!! I was sooo nervous as we’ve never kept Kye up as late as he’d be up and hadn’t ever had him in such a crowded, loud, crazy environment. It would be an interesting evening! 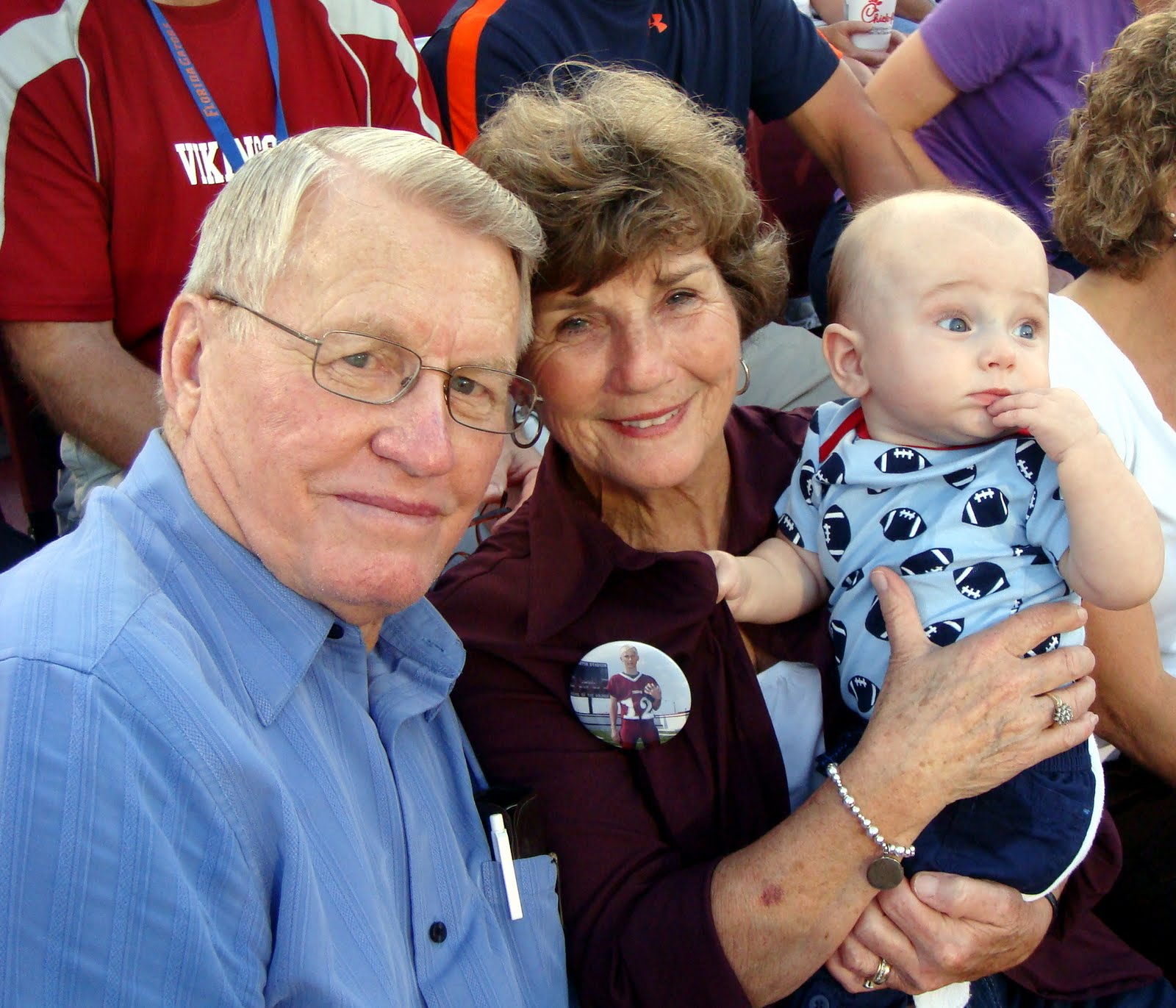 When we got there Mrs. Charlotte had saved us a parking space (yes, people for a HIGH SCHOOL football game go hours early to get a spot) and had gotten us tickets (the ONLY ones left were nosebleed…but luckily some people didn’t show up near the Parker’s season ticket holder seats). We opted to bring in the car seat with us hoping that maybe he’d actually fall asleep in it.

(With G-Mamma and Big Papa!) 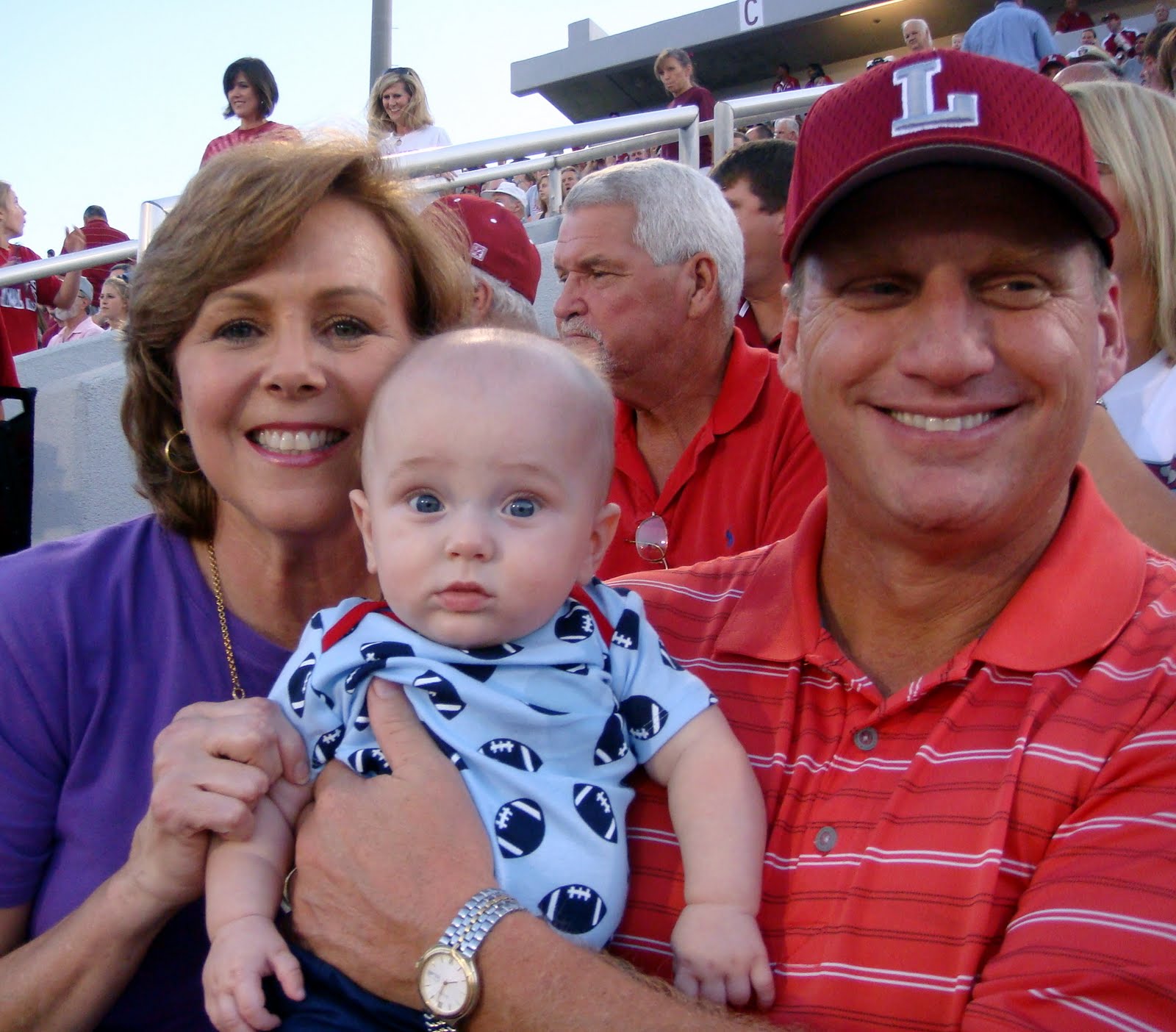 It was pretty good timing because we got there at about 7:30 and everyone got to ohh and aww over him before the game started at 8. I took pictures of our little family entering the stadium, pictures of Little Mama and Big Daddy with him, and pictures of him throughout the game. People probably thought I was hilarious because I wasn’t paying a bit of attention to the field!!! Whenever everyone cheered (or booed) I didn’t join in, I looked at my son to see if he’d bust out in tears crying because he was scared. To date, it was the most protective I’ve ever been about him! 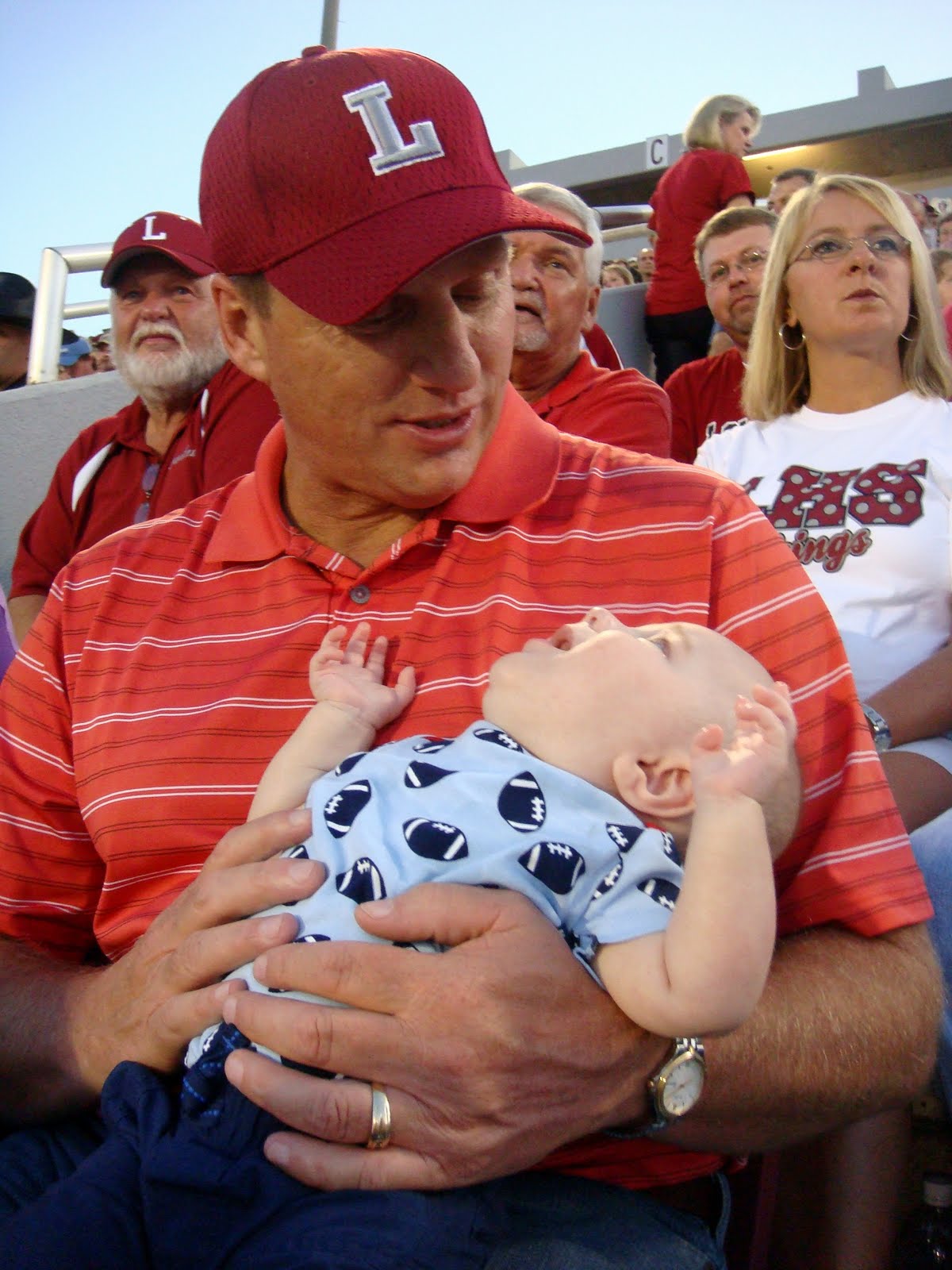 He really did so so so much better than I expected. He only cried once out of fear (some guy would NOT stop booing this LOUD annoying BOO) but did great when the band played and when everyone would cheer like crazy. He barely looked at the field (takes after his mommy? haha) but instead just kept staring at Mr. Rusty! It was seriously such a precious thing to see! 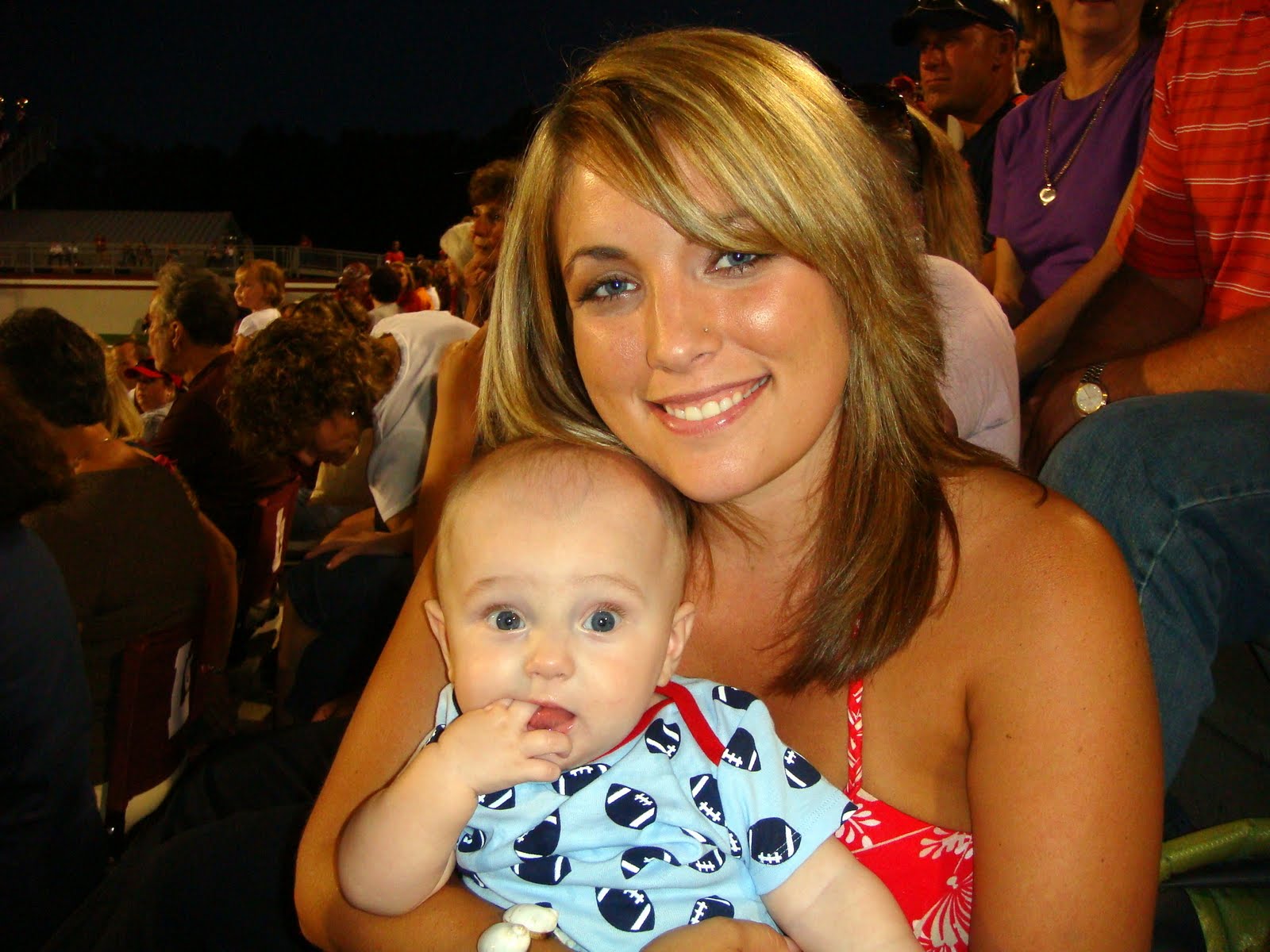 At about 8:30 we took him and put him in his car seat and covered it with a little blanket and I just rocked it back and forth. And somehow our little boy managed to fall asleep!!! I was sooo impressed!!! He slept through it ALL! Cole did ~awesome! and we were able to leave after the half because Cole didn’t go back in. It was a total blowout (75-14 was the final score) which I was happy about! I hope all the games are that way! 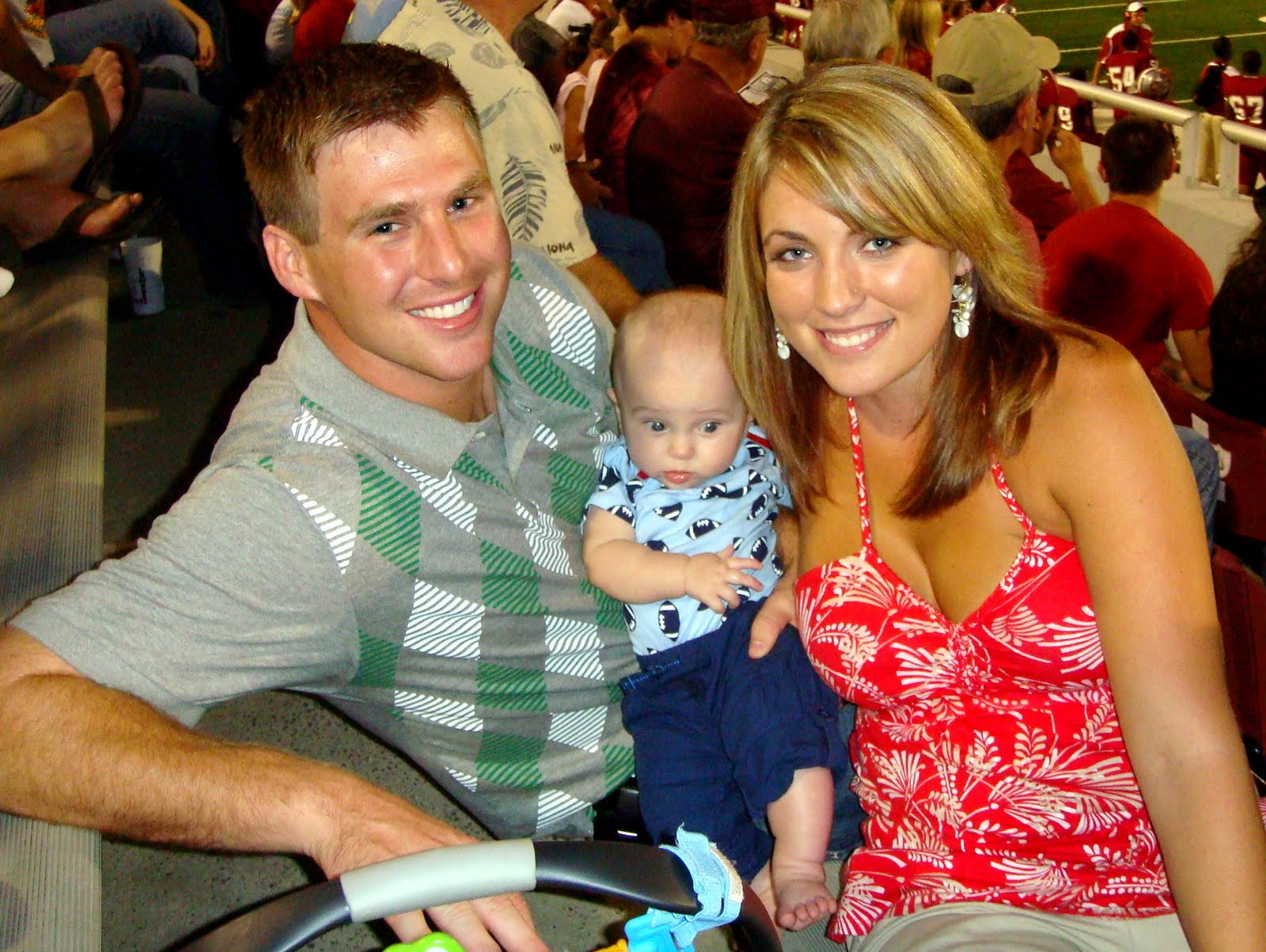 We got home around 10 and Zach put Kye straight to bed. He did great for the night and had no issues at all the next day. It was a wonderful overall experience and while I don’t ever plan on making late nights a regular thing, I do feel like the other games we go to should go okay! I am so thankful he’s under 22 lb and can still be in this car seat. I think without it the night would have gone MUCH differently! Here’s hoping he can hold off getting much heavier until at least after December 🙂 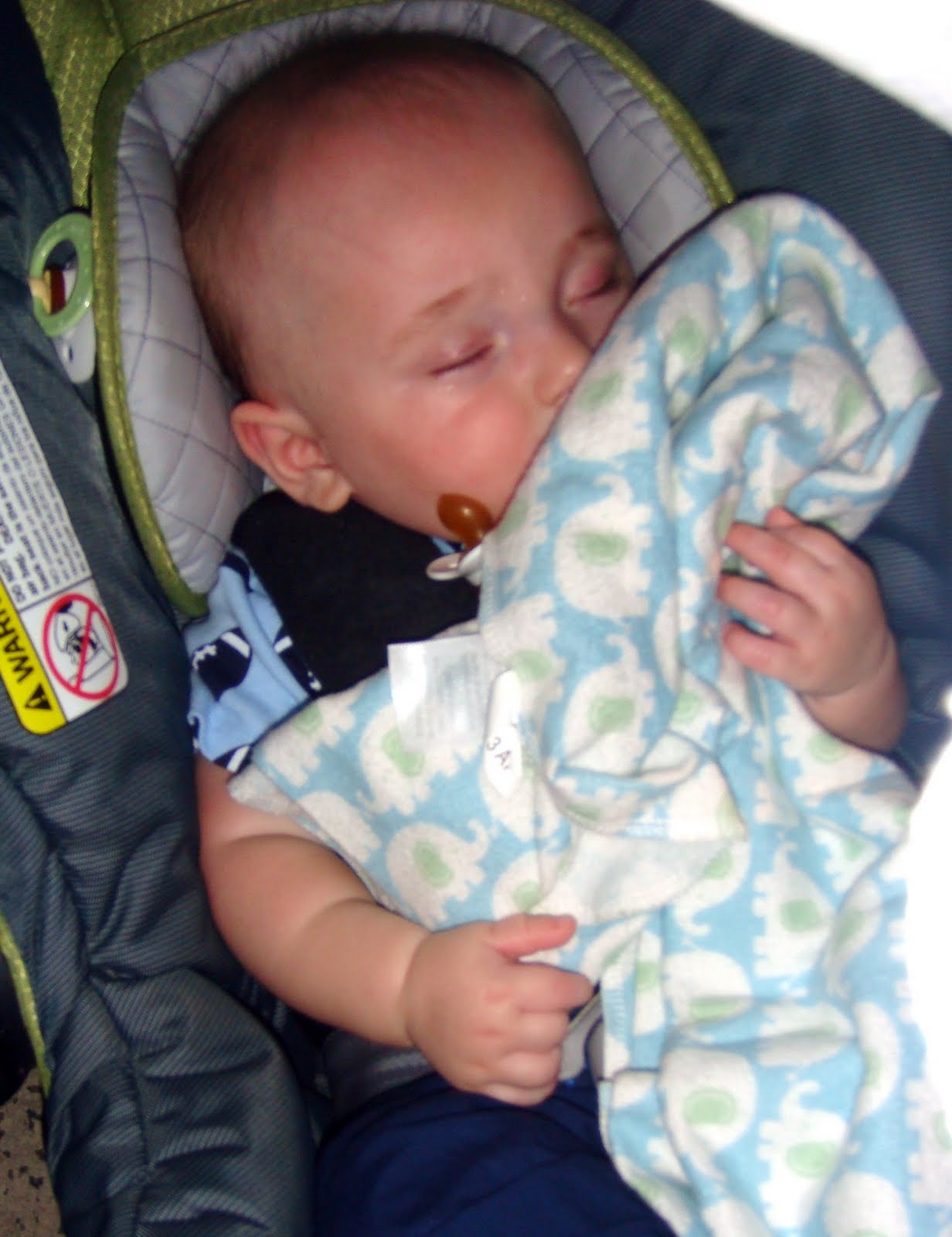