If you have been following along for awhile then you know how much prayer we put into a BIG decision we made this year. It was time to decide where Kye would attend Elementary School as the private pre-school program he was in ended after kindergarten. Whew. I felt like more than any other parenting decision we’ve made so far that THIS was among the biggest. School is where he will spend most of his time each day. It’s where friendships will be made. Knowledge will be learned. It will impact and shape his future! You can read about how we came to our decision to enroll him in the local public school here 🙂

Even though I felt like we made the best choice, I still had SO MUCH anxiety about it. So much so that I developed this weird eye twitch in the days leading up to his Open House. I was beyond nervous. Did we make the right call? Would everything go over well? Would he like it? Would we?

In the days leading up to the Open House I drove the kids by his school so he could see it for the first time. It looked HUGE but he was excited! Thankfully Zach was able to come to Open House with me so we all headed there together. 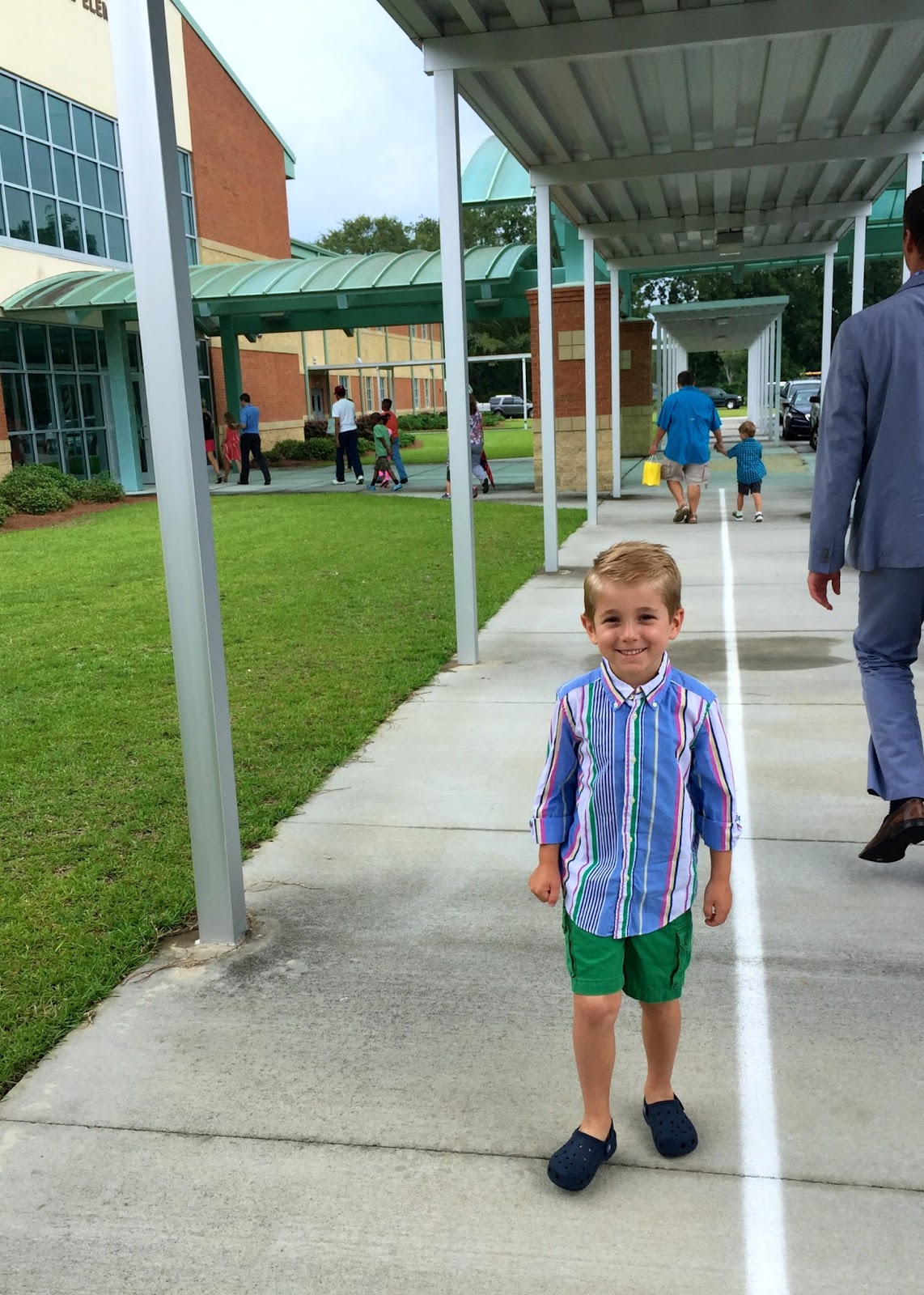 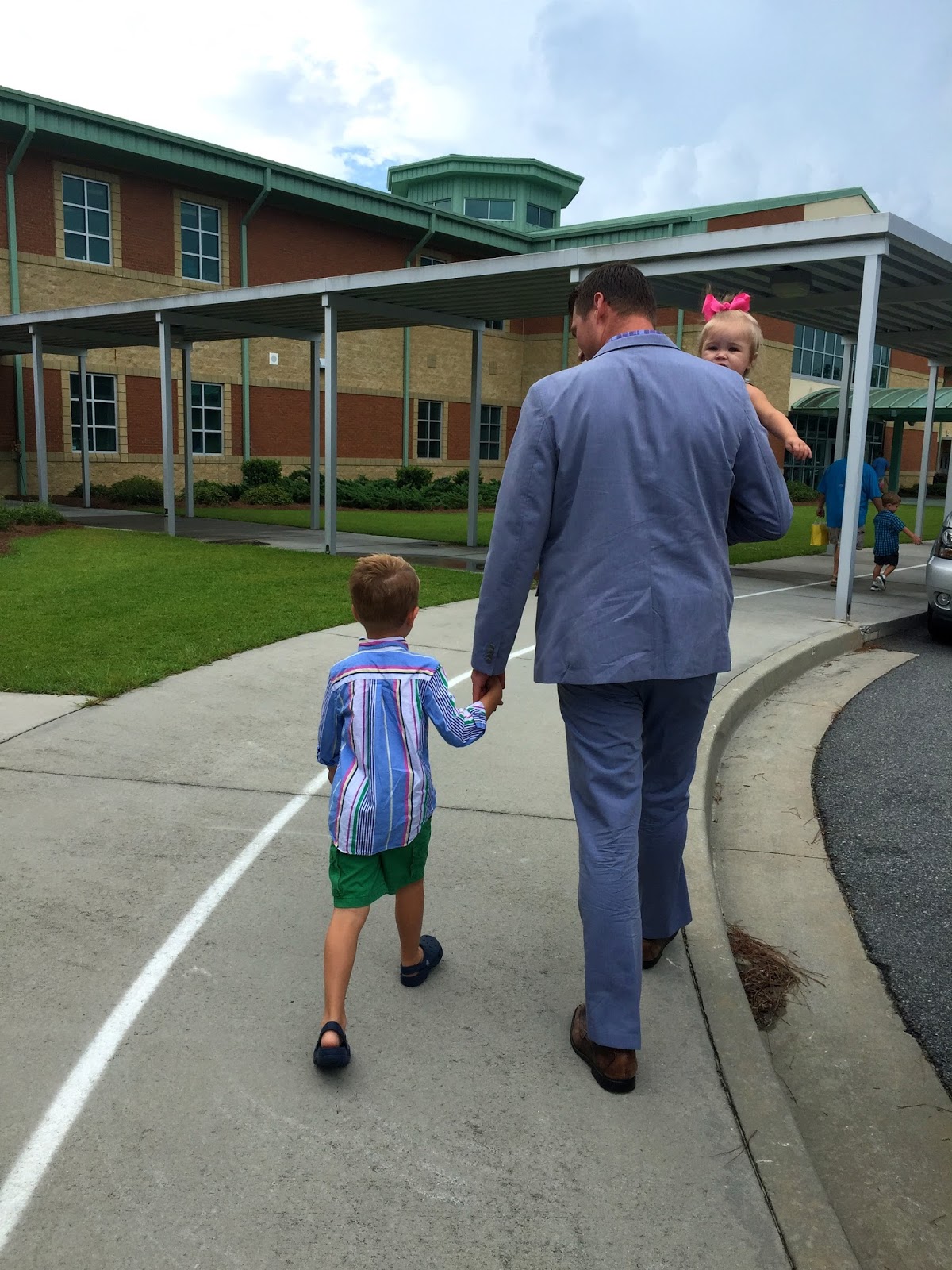 When people found out we had chosen the public school I got all kinds of questions regarding which teacher we were hoping for but I had NO HOPES. I don’t have any say in who he gets so why concern myself with that? I purposely didn’t ask around for who the “best” teachers for his grade are. I just waited and when it was open online to view I checked it out and googled who he got haha. A few people I know had experiences with his teacher and had nothing but good things to say…and y’all. I truly 100% believe that GOD placed Kye exactly where he needs to be this year!

I walked into that building with an eye twitch and so much anxiety that I thought I’d puke. Then we walked in his classroom and the VERY first words out of his teacher’s mouth were about JESUS. How amazing is that?!?! I was BLOWN AWAY by her. I felt instant relief wash over me and Kye was BEAMING with excitement as we walked around the school. He was excited and I was SO much more relaxed knowing that he would be in good hands! 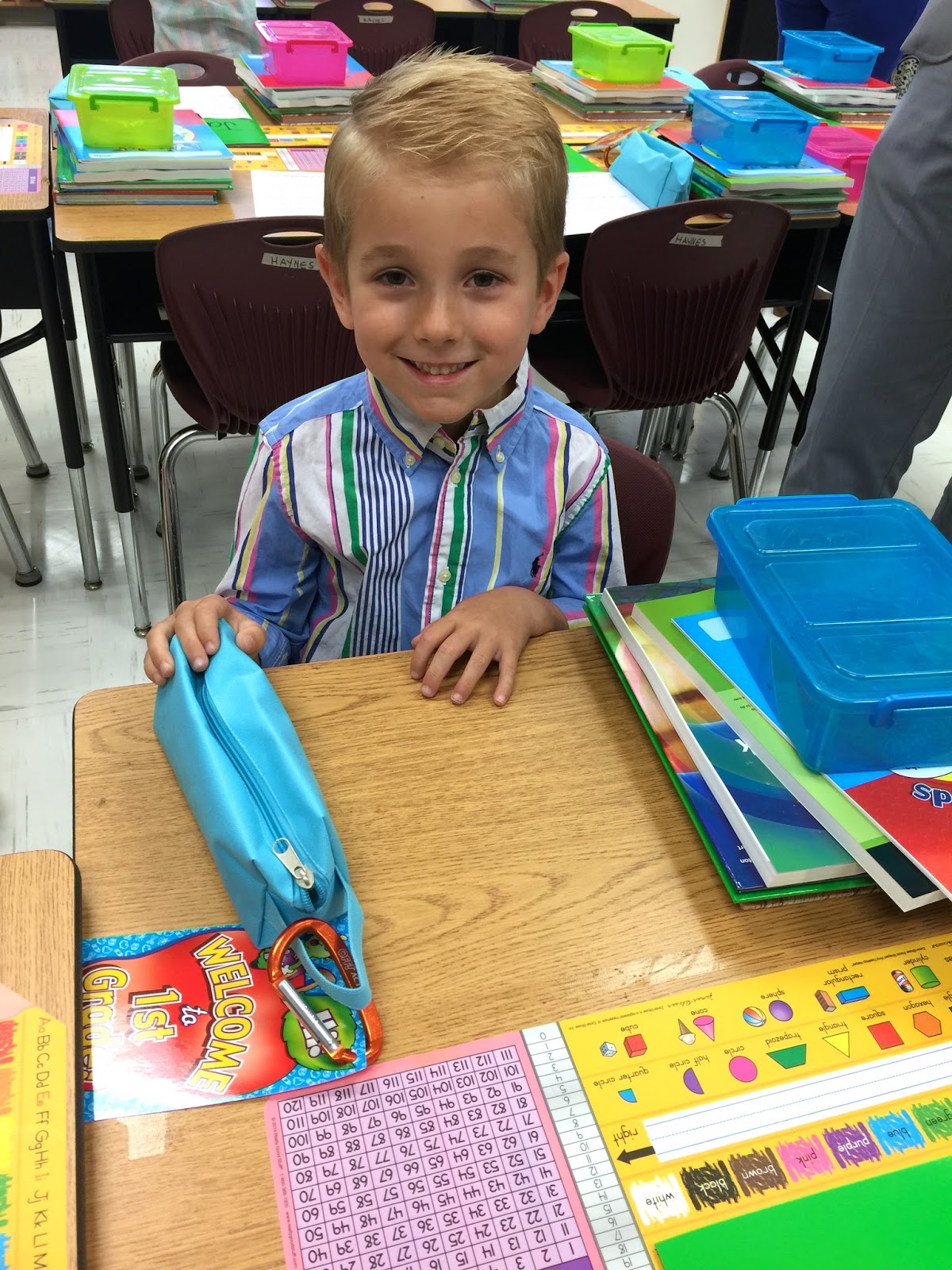 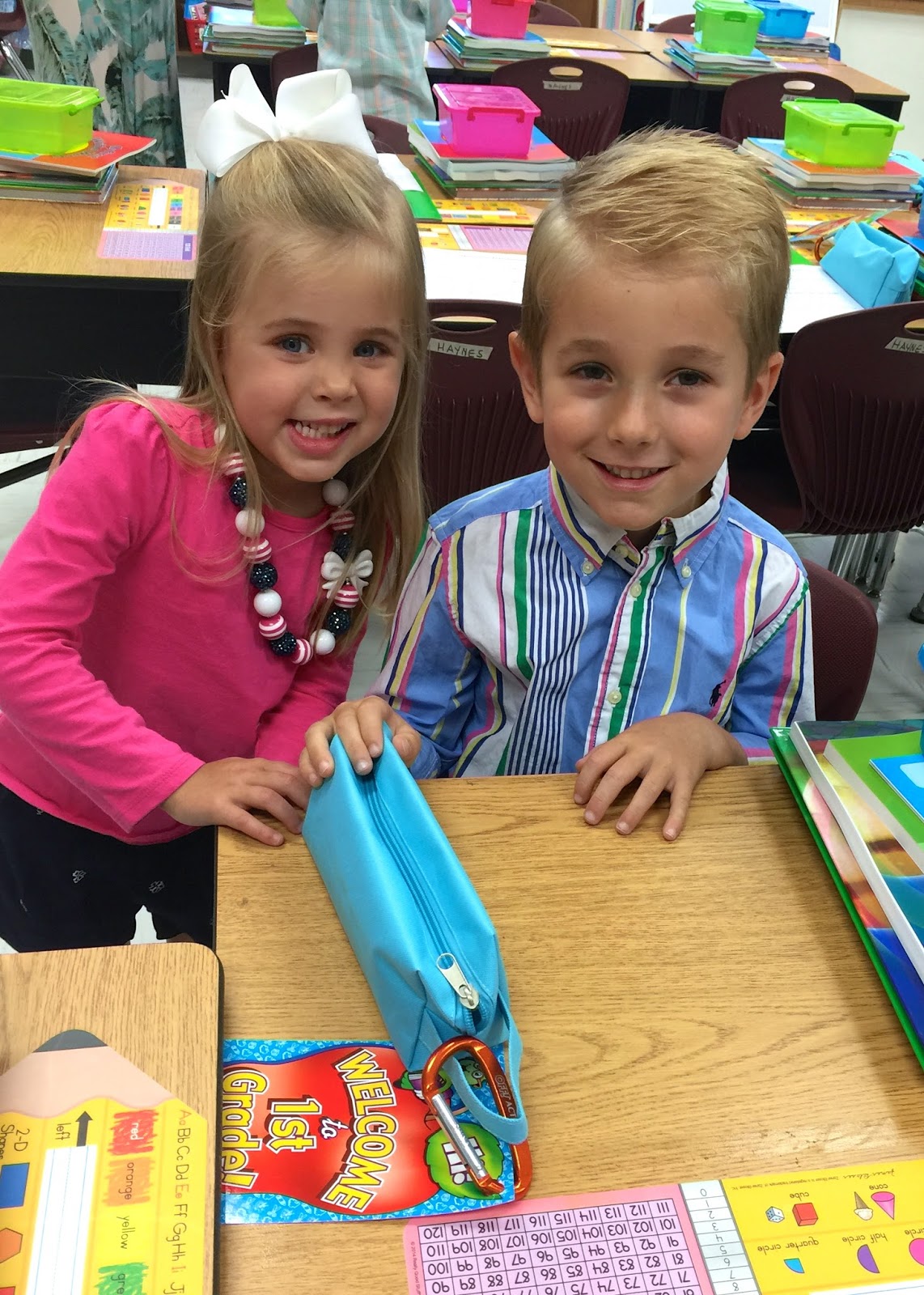 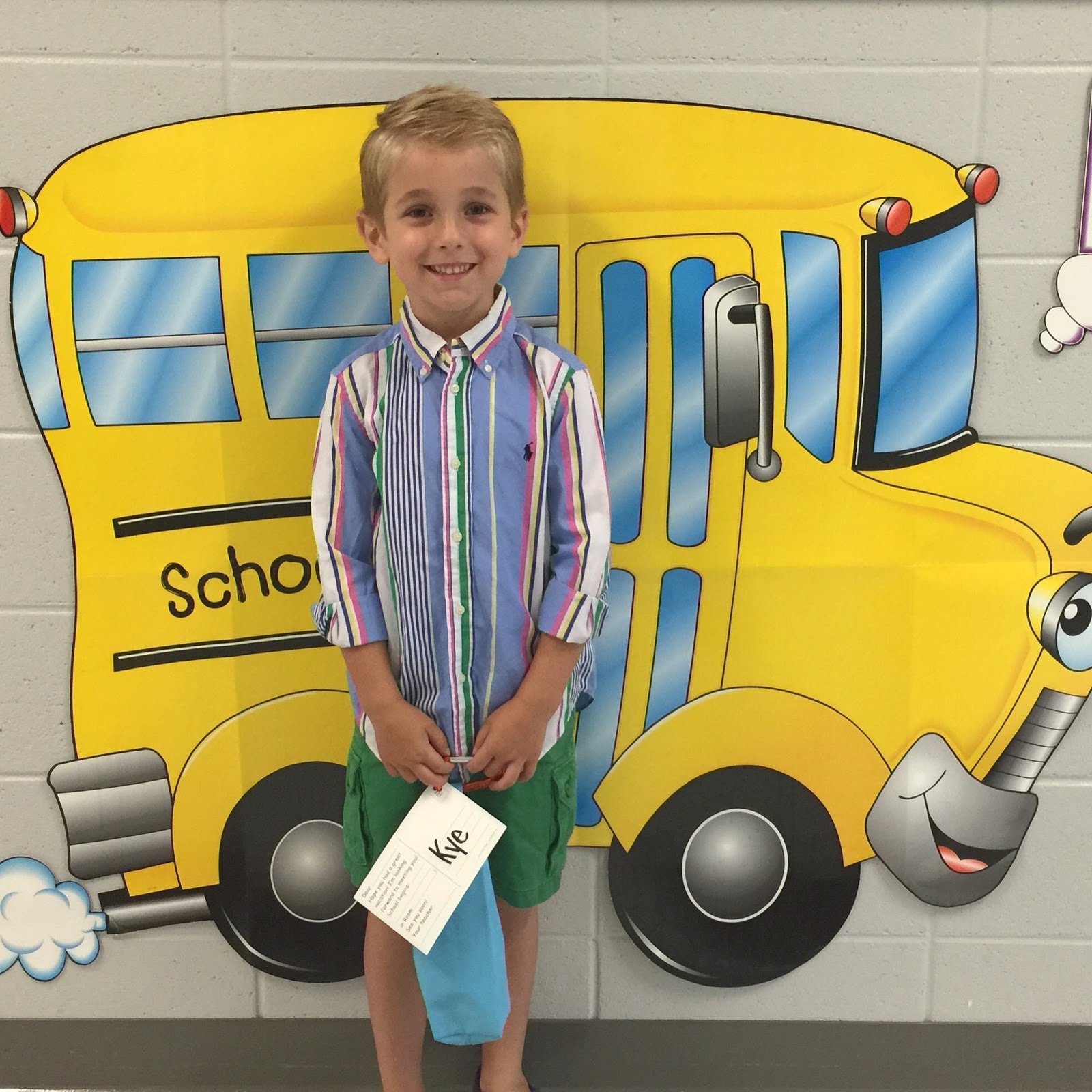 I feel like the transition to all-day school is such a huge one for our family. It’s like the end of the “baby” era and the start of the “big kid” one. Majority of Kye’s awake hours during the day will be spent away from me. No more lunch at home. No more naps. I will really only get to spend a couple of hours with him in the afternoons before bedtime. My heart hurt just thinking about this big change. I know he’s ready and I know that most kids go through this transition in kindergarten so really I had an entire extra year! But none of that made it much easier for me to let him go 🙂

I gave him this letter the night before his first day:

I am SO excited for you and your new school. I know you are going to have a great time and learn so much. You are going to meet so many new friends and have tons of fun!

I want you to know how proud I am of you. I will miss you every moment of every day and I am excited to hear about all the things you do and learn. I am always here to listen when you need to talk and to hug you when you may just need a hug.

You have such a strong love for God and I pray that He will protect your heart and help you teach others about Him. I know you will make good choices and let your light shine every day!

I love you so very much. You are so special to me!

While I’m sad about Kye not eating lunch at home, I have been weirdly excited about packing school lunches. People keep telling me the “fun” of it will ware off but so far I still find it a fun challenge to think up lunch ideas! The first few days I WAY over-packed. I mean he had enough food to probably feed his entire class haha He only gets like 25 min for lunch so I learned to cut it back some 😉 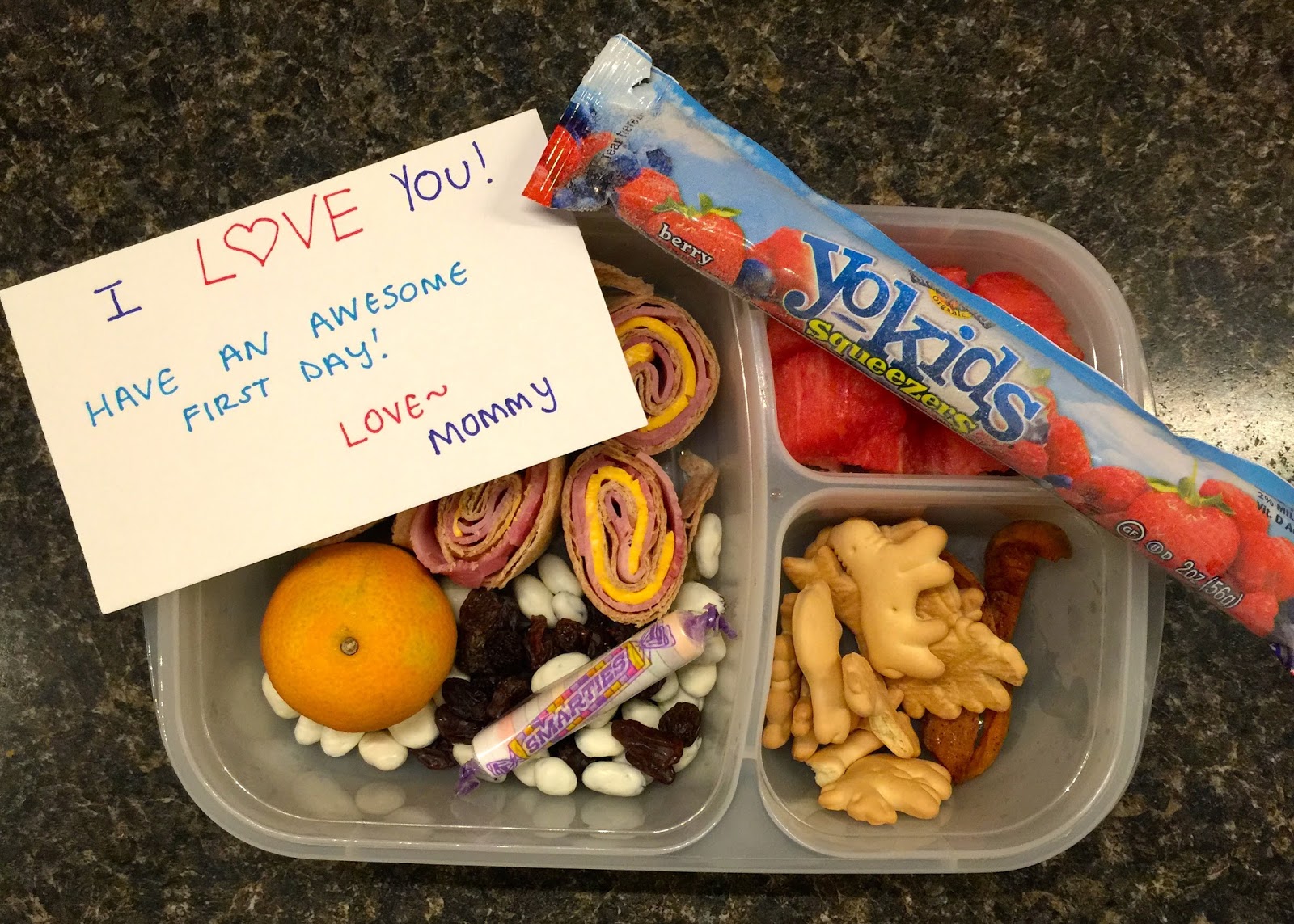 His first day of school fell on a Thursday which I was thankful for! It gave us just a couple days before a weekend so we were able to get the feel of school without having to do it 5 days in a row right off the bat! Here are the traditional first day of school pics for our big FIRST Grader! 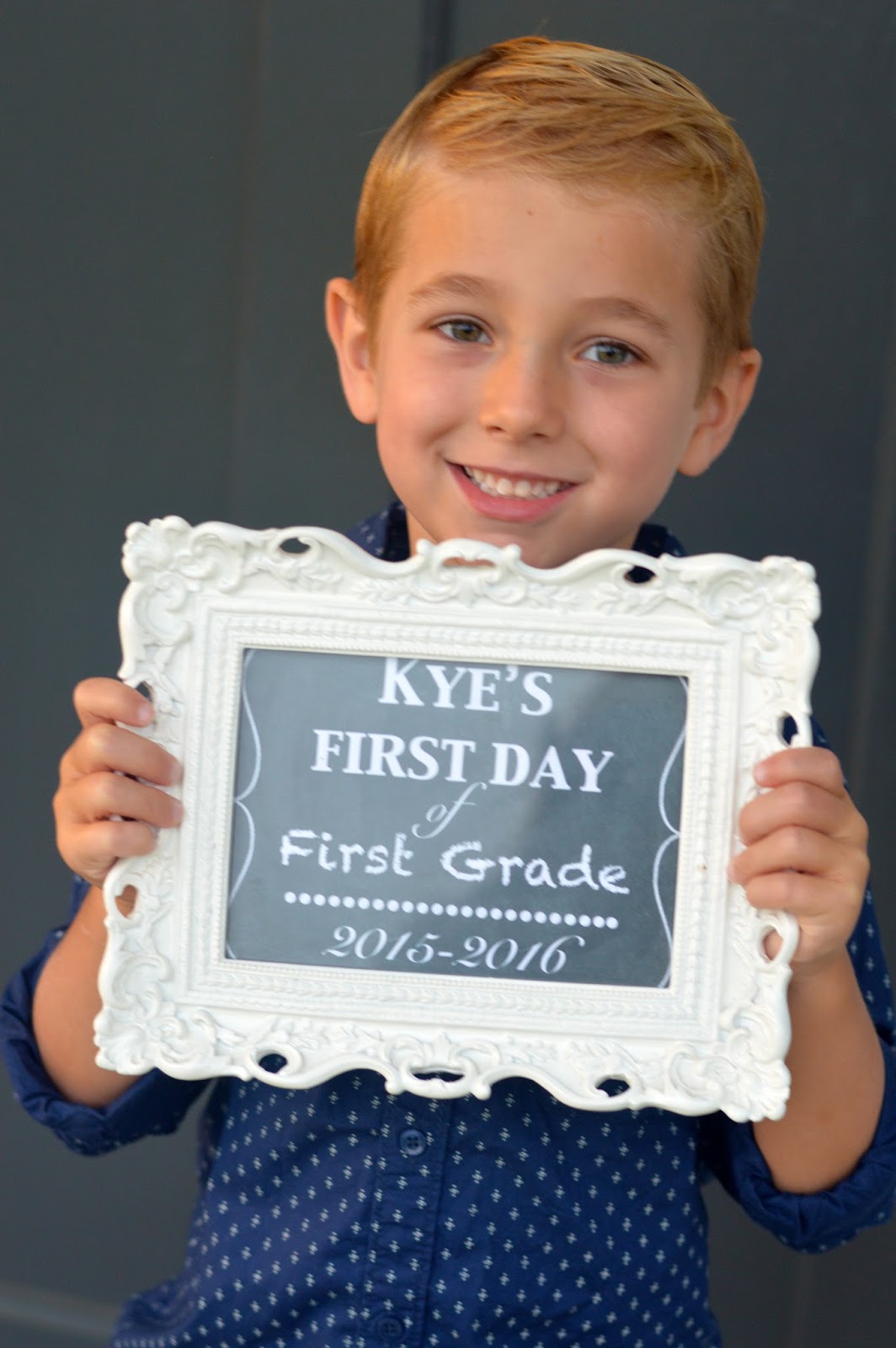 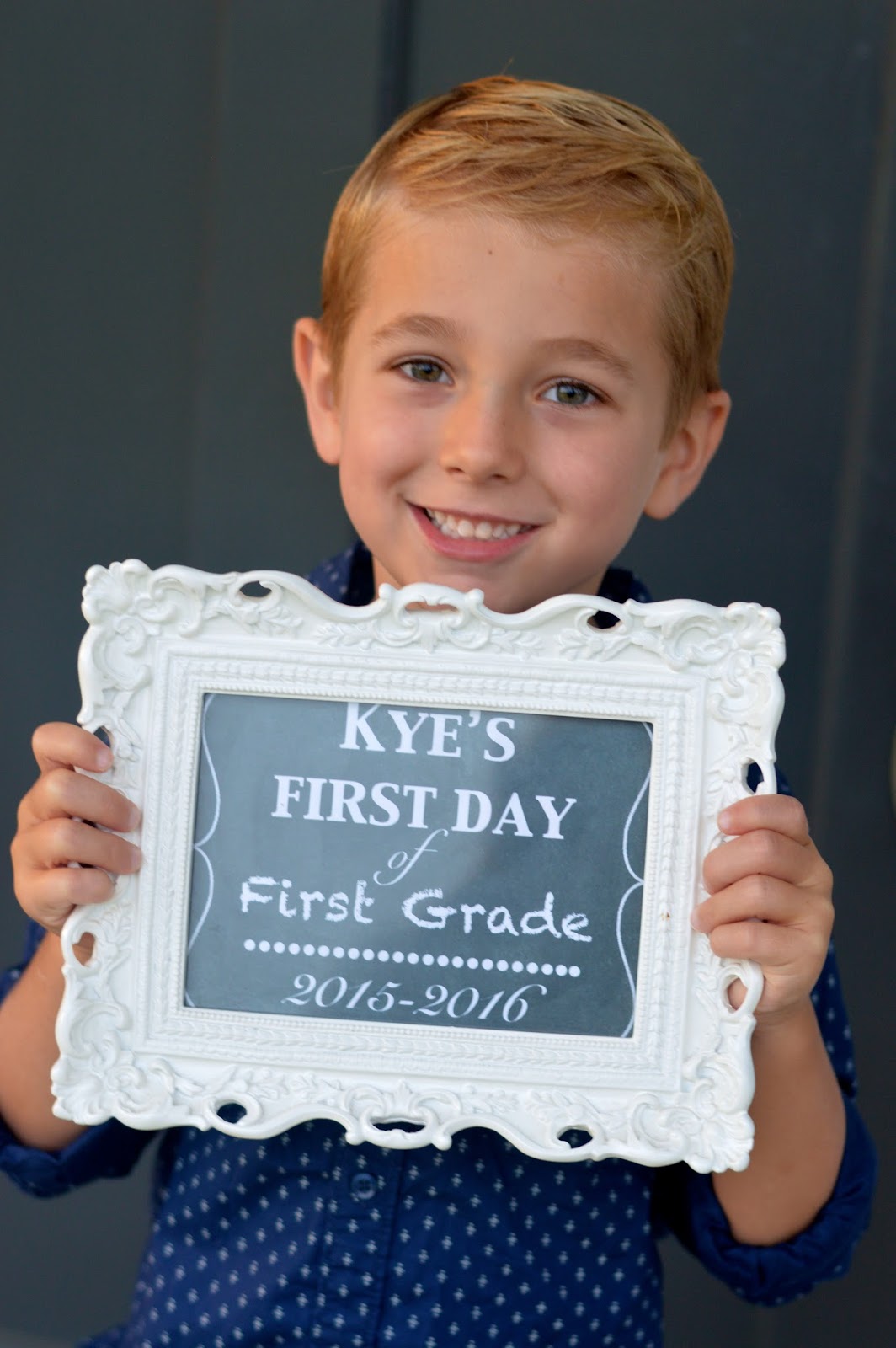 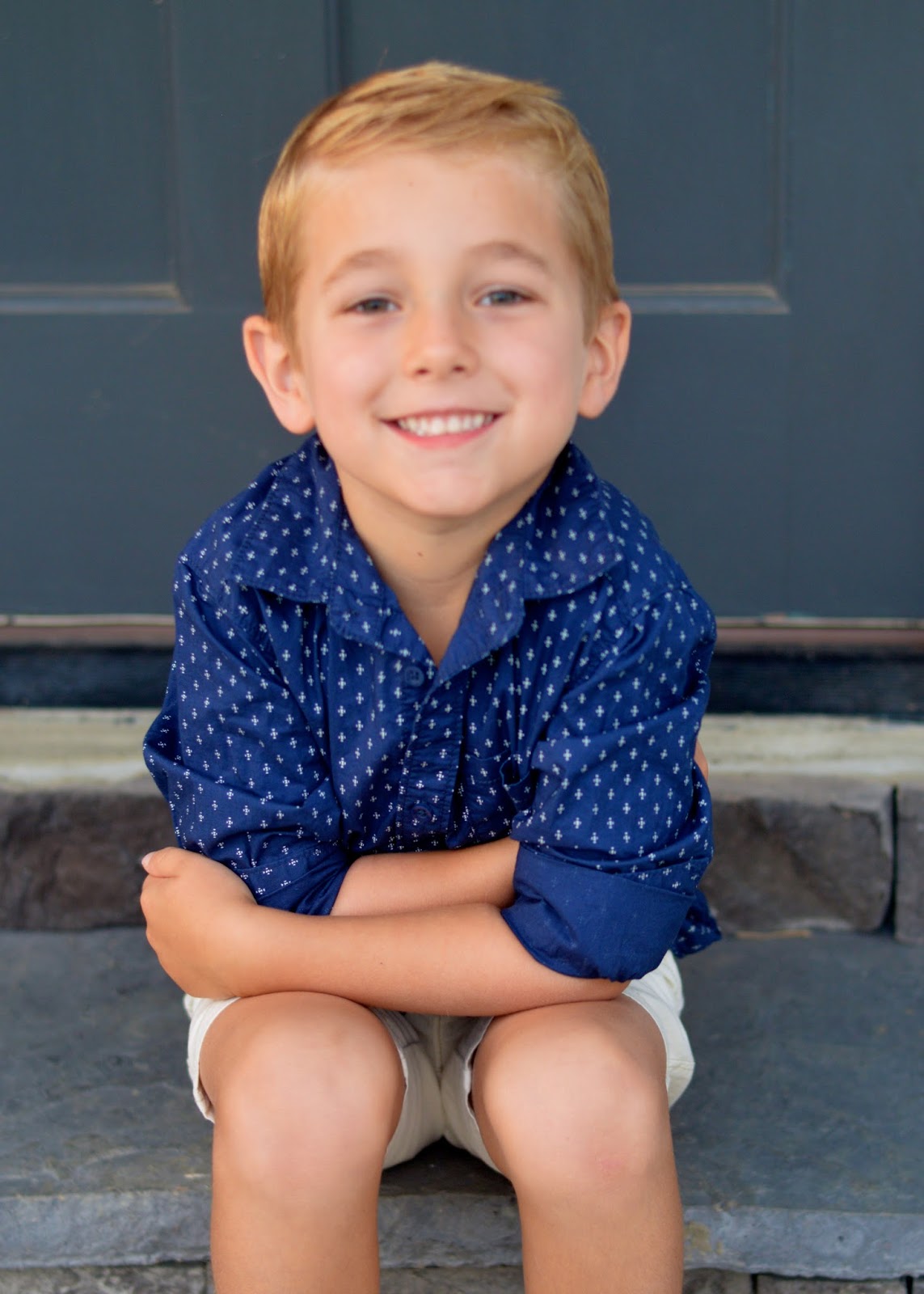 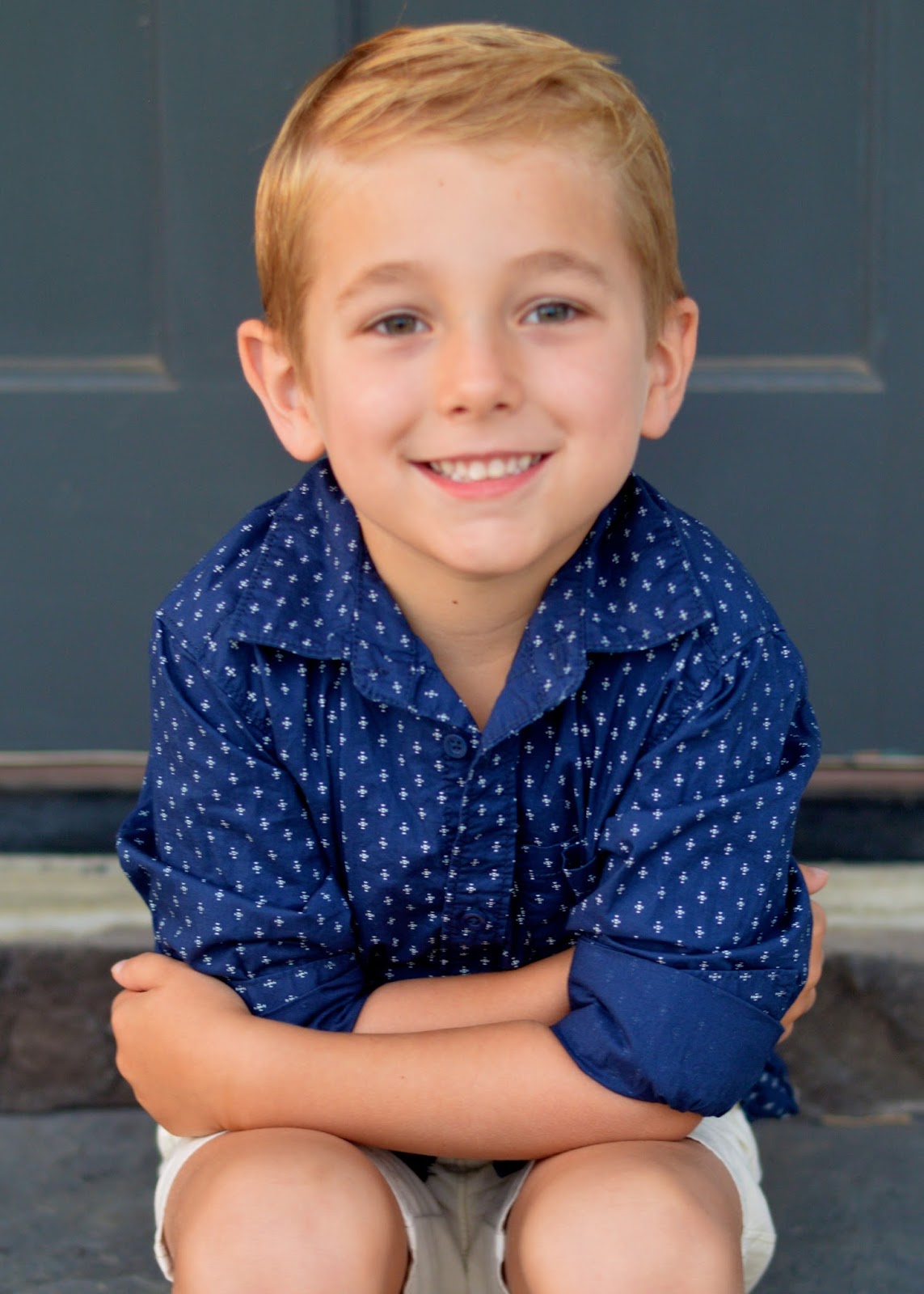 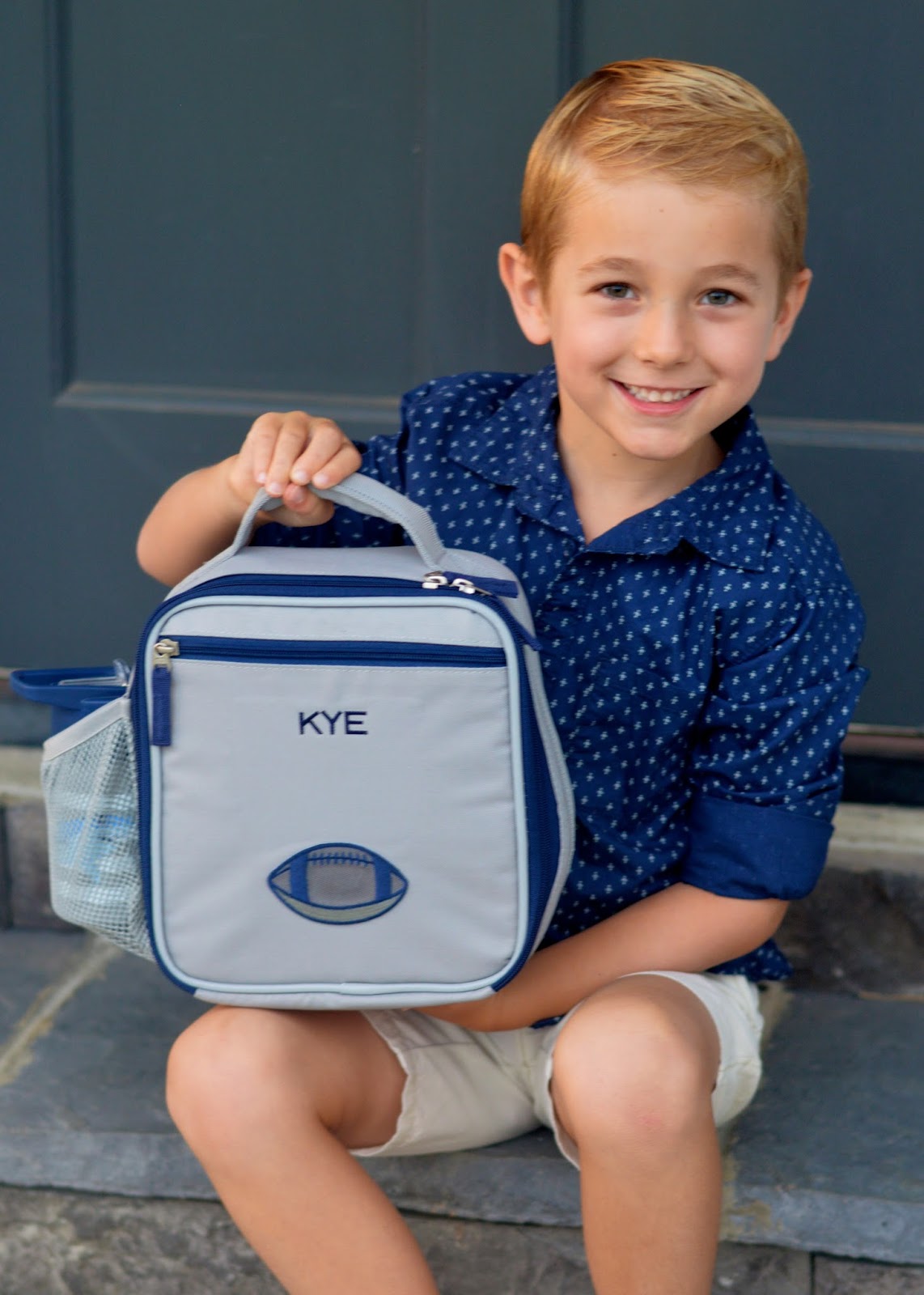 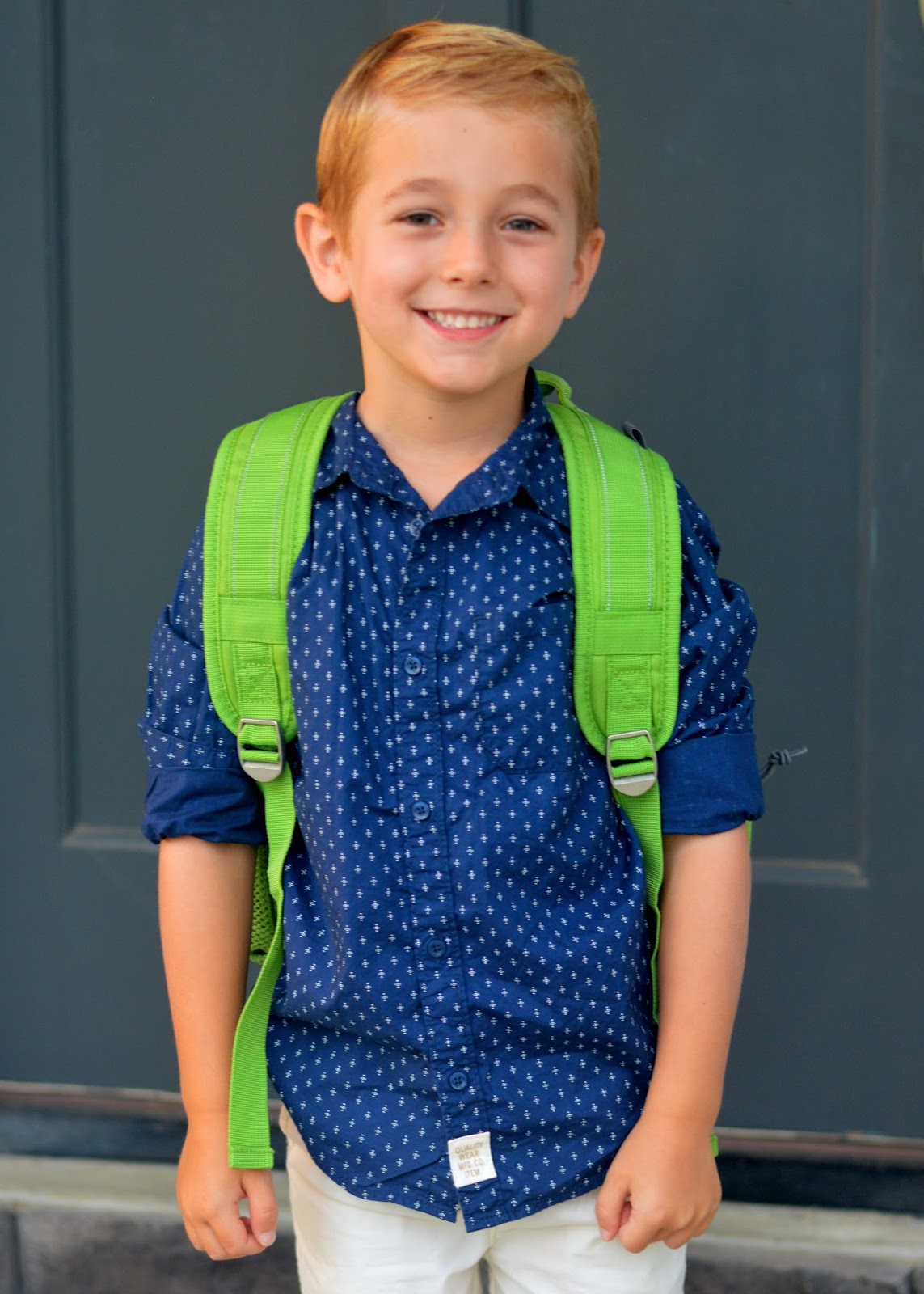 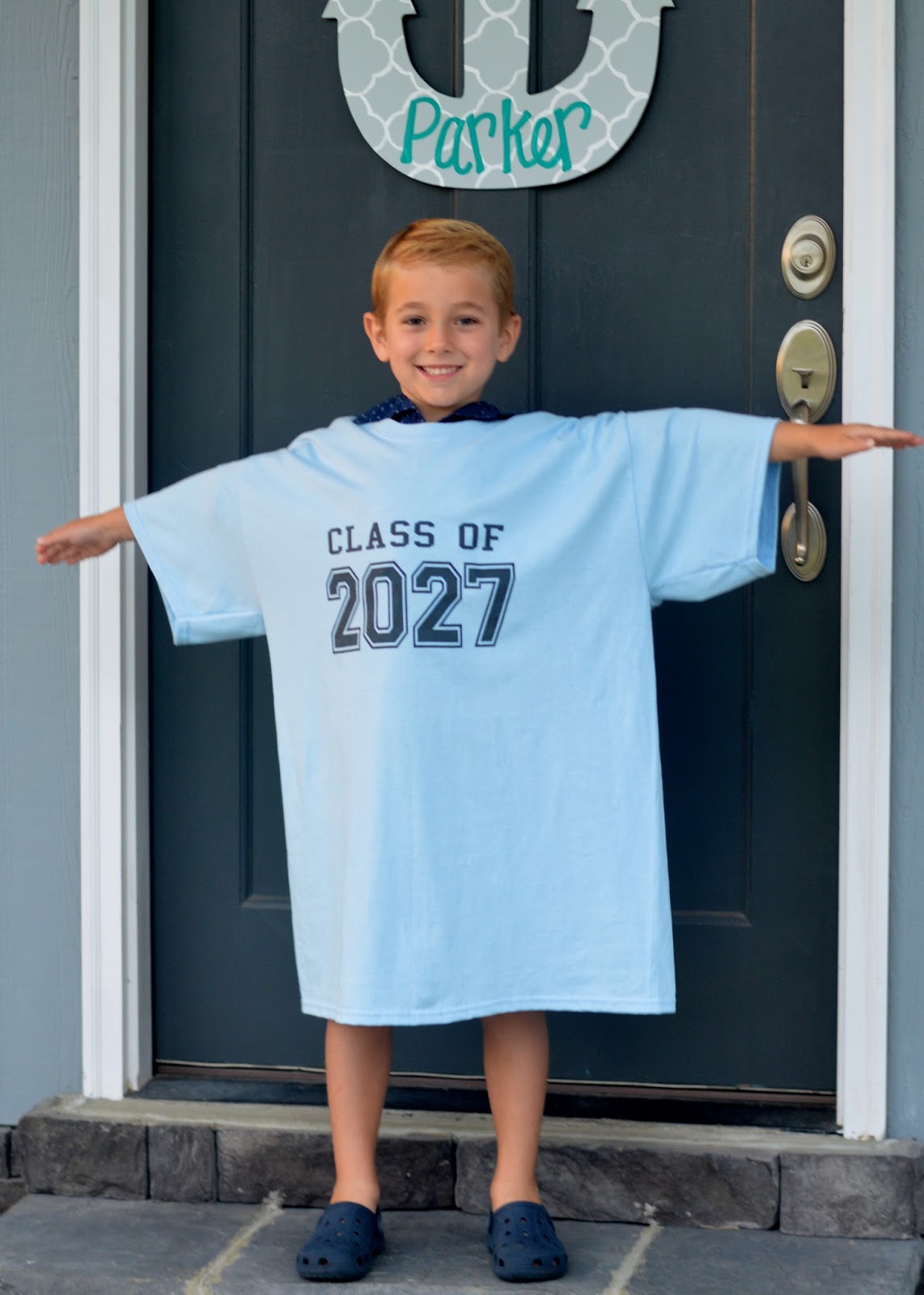 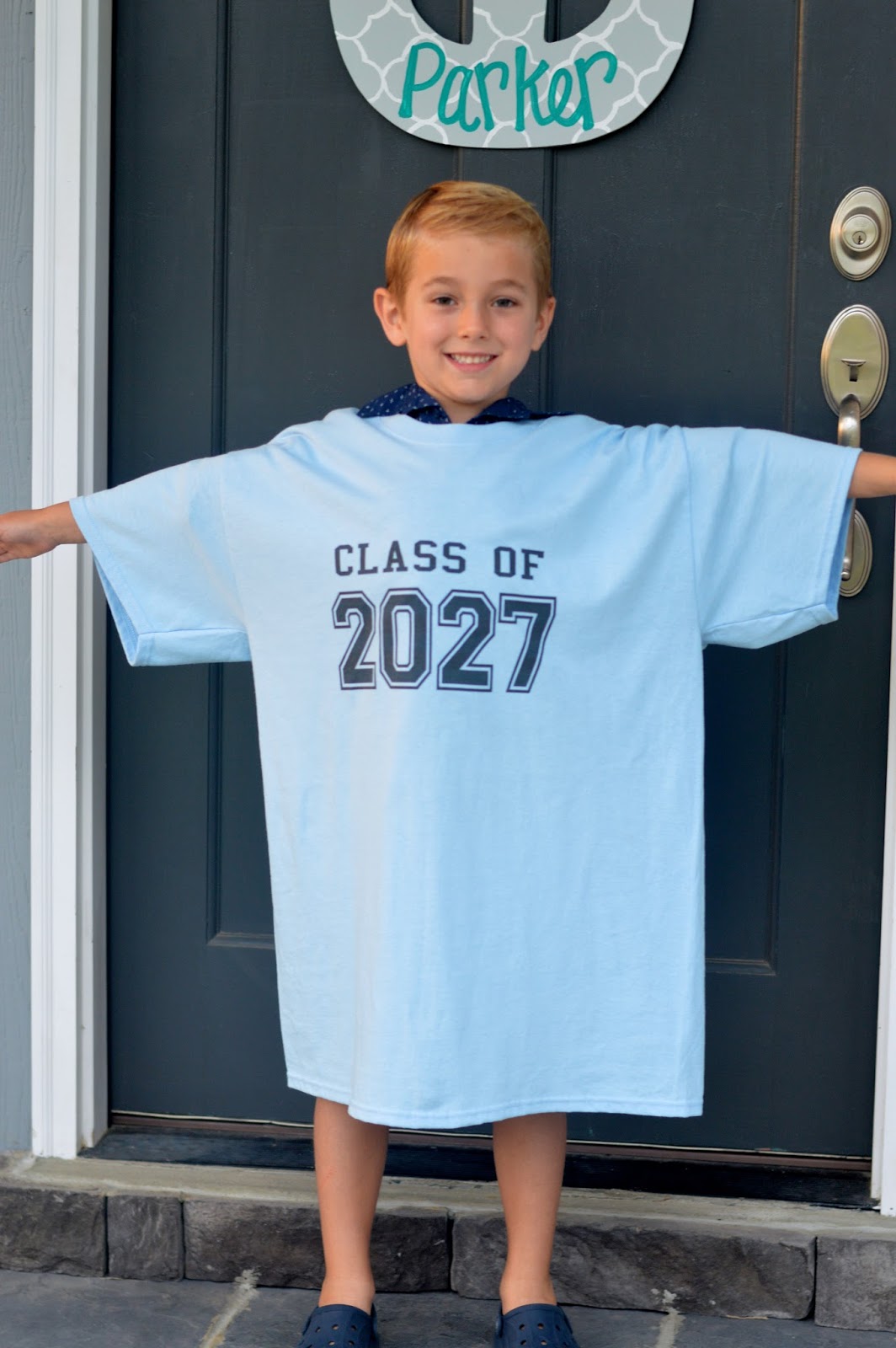 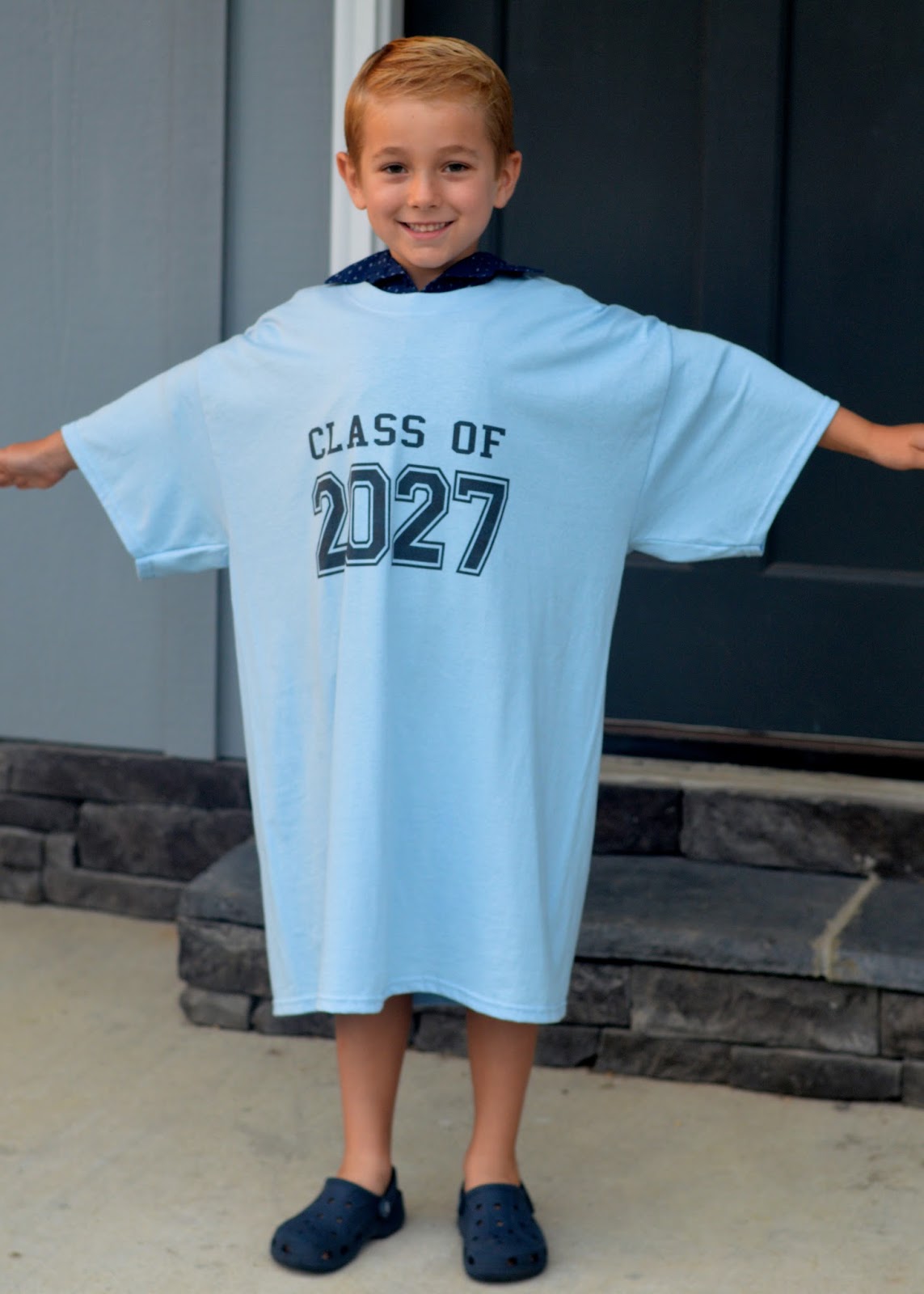 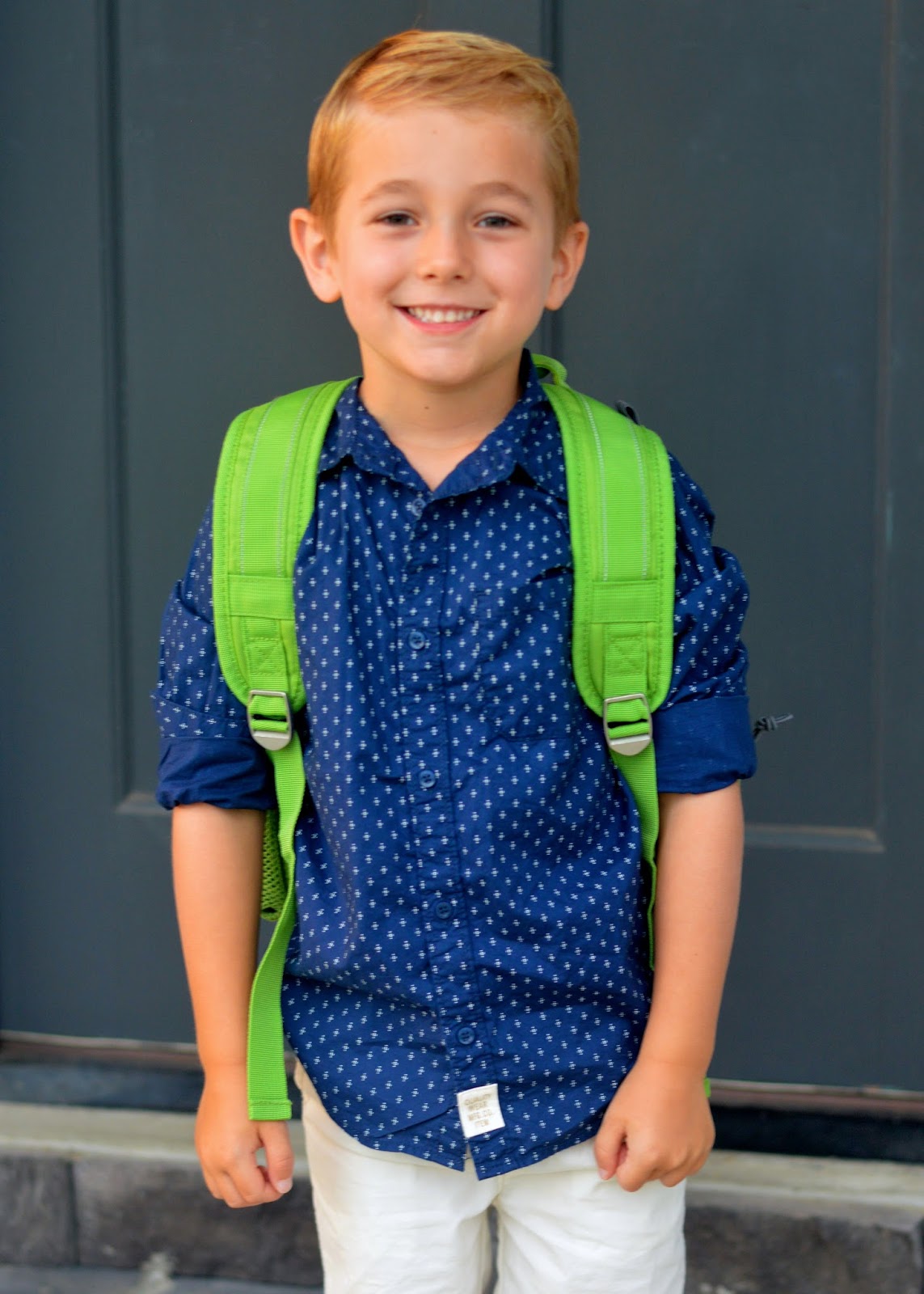 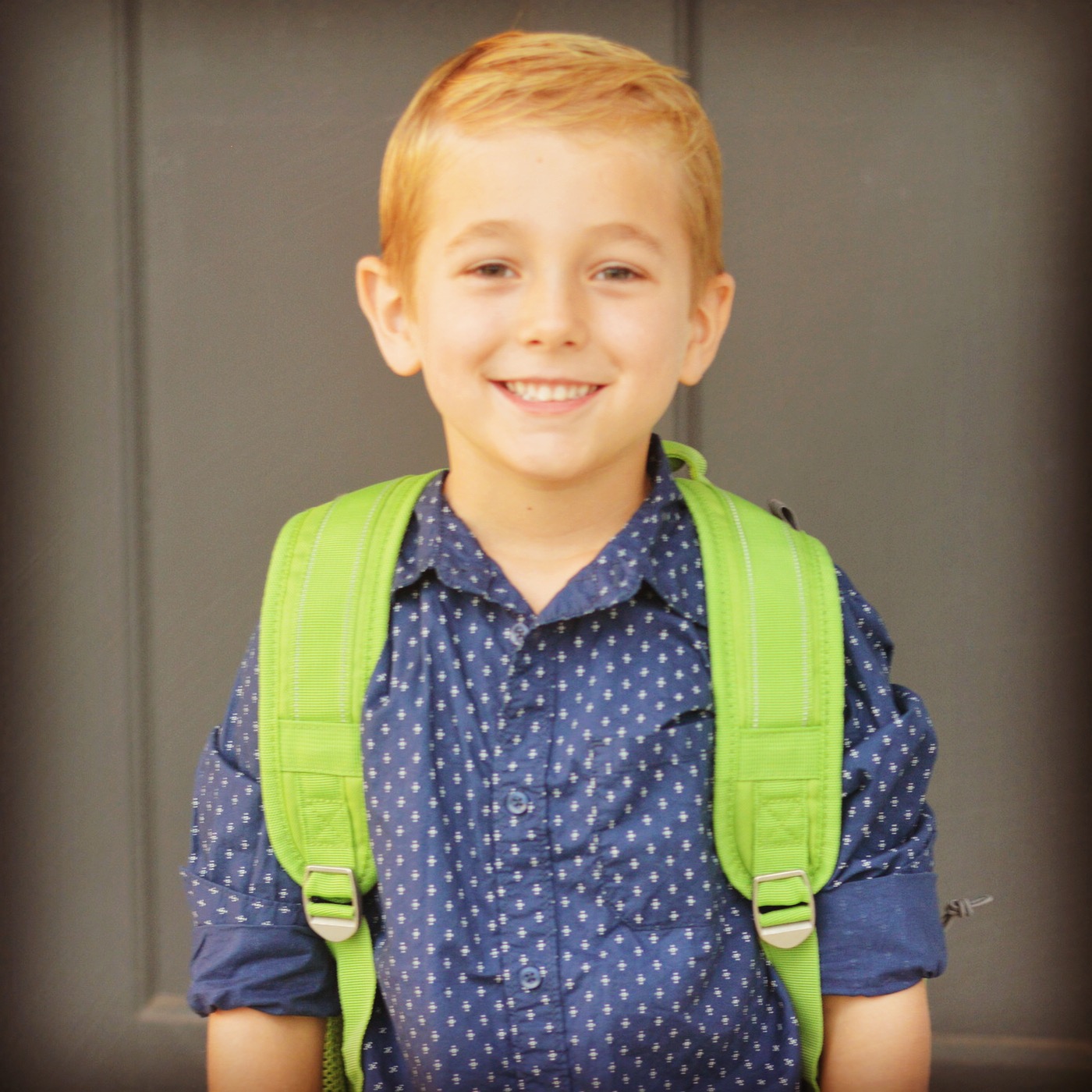 Zach, the girls and I all took Kye to school together. They allowed for us to walk him in for the first couple of days until he knew the layout and where to go. He was SO excited and eager and never showed ANY signs of being nervous. I did my best to let all my fears stay hidden and I must have pulled it off pretty well 😉 I did about LOSE IT when we first walked out of his class after dropping him off. BUT then I remember that my kid is a first grader. The crying moms were all the ones with kindergarteners…so I pulled my junk together 😉 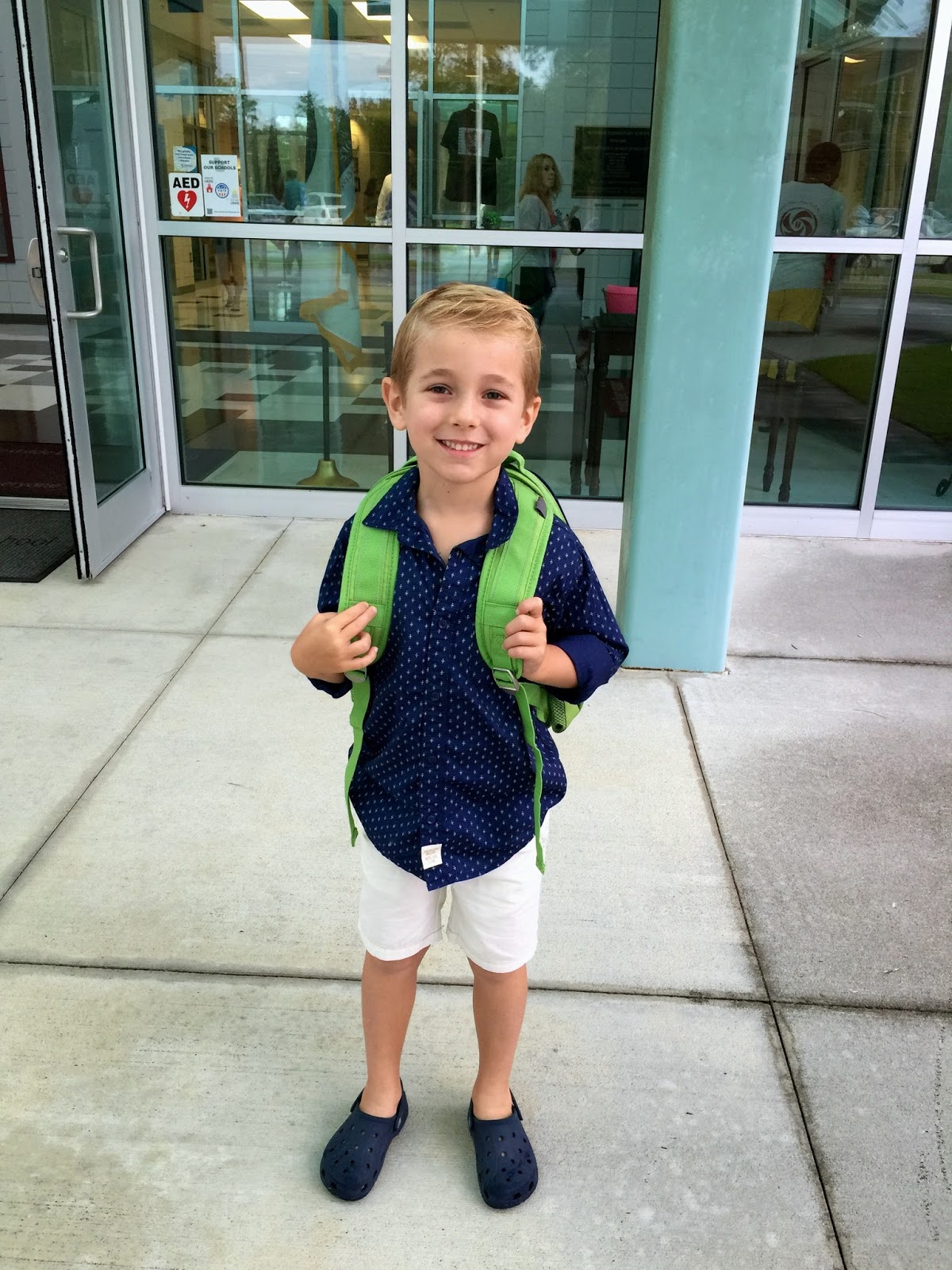 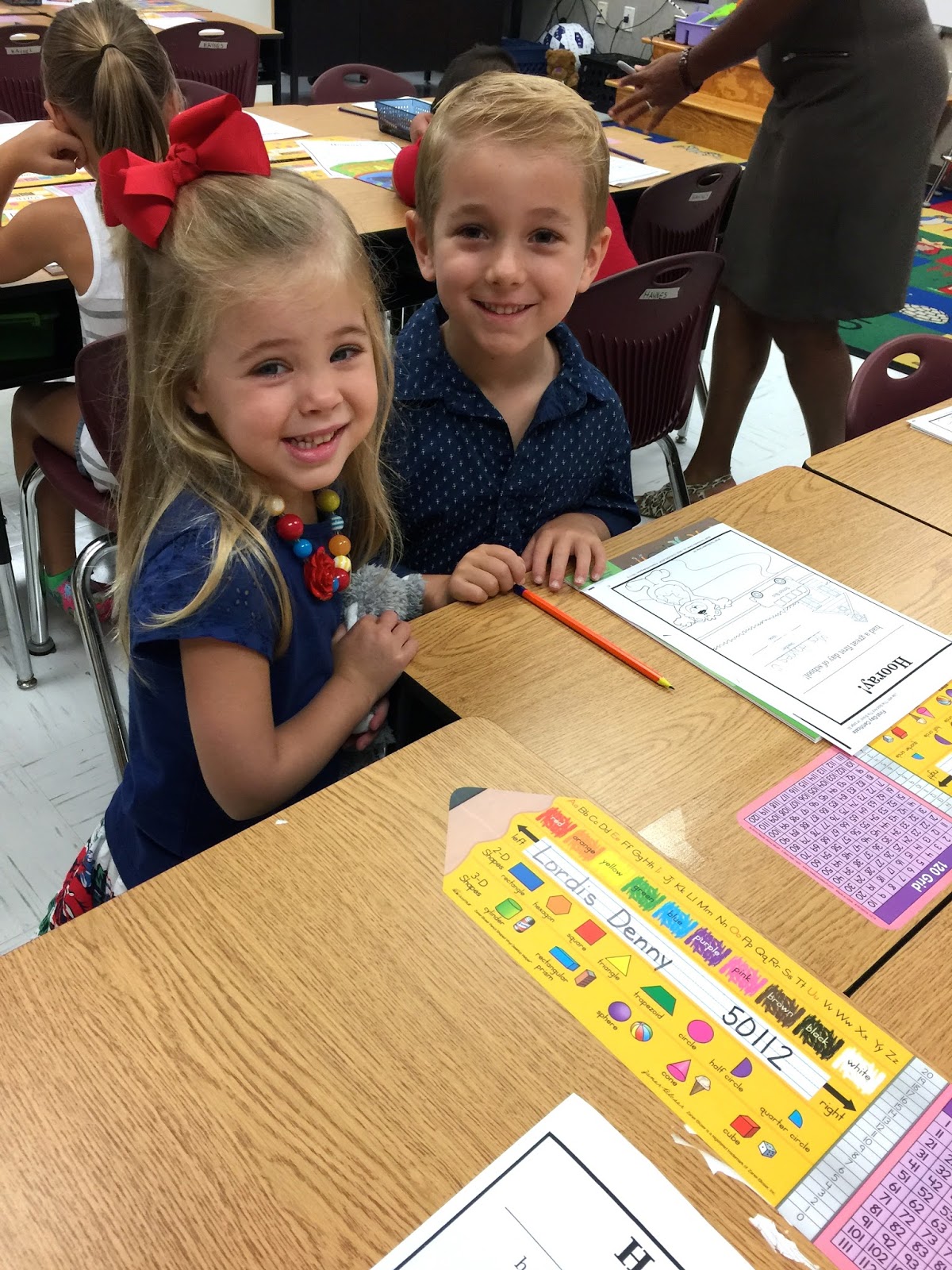 I gotta brag a little more on his awesome teacher! She’s AMAZING! I explained to her that he had a class of only 5 kids last year and that it may take some adjusting for him to go to a class of 28 and surrounded by kids who may not have the same belief system he does. She called me a few days into the school year just to chat and check in and see how he was doing! So impressed 🙂 Kye LOVES his teacher! 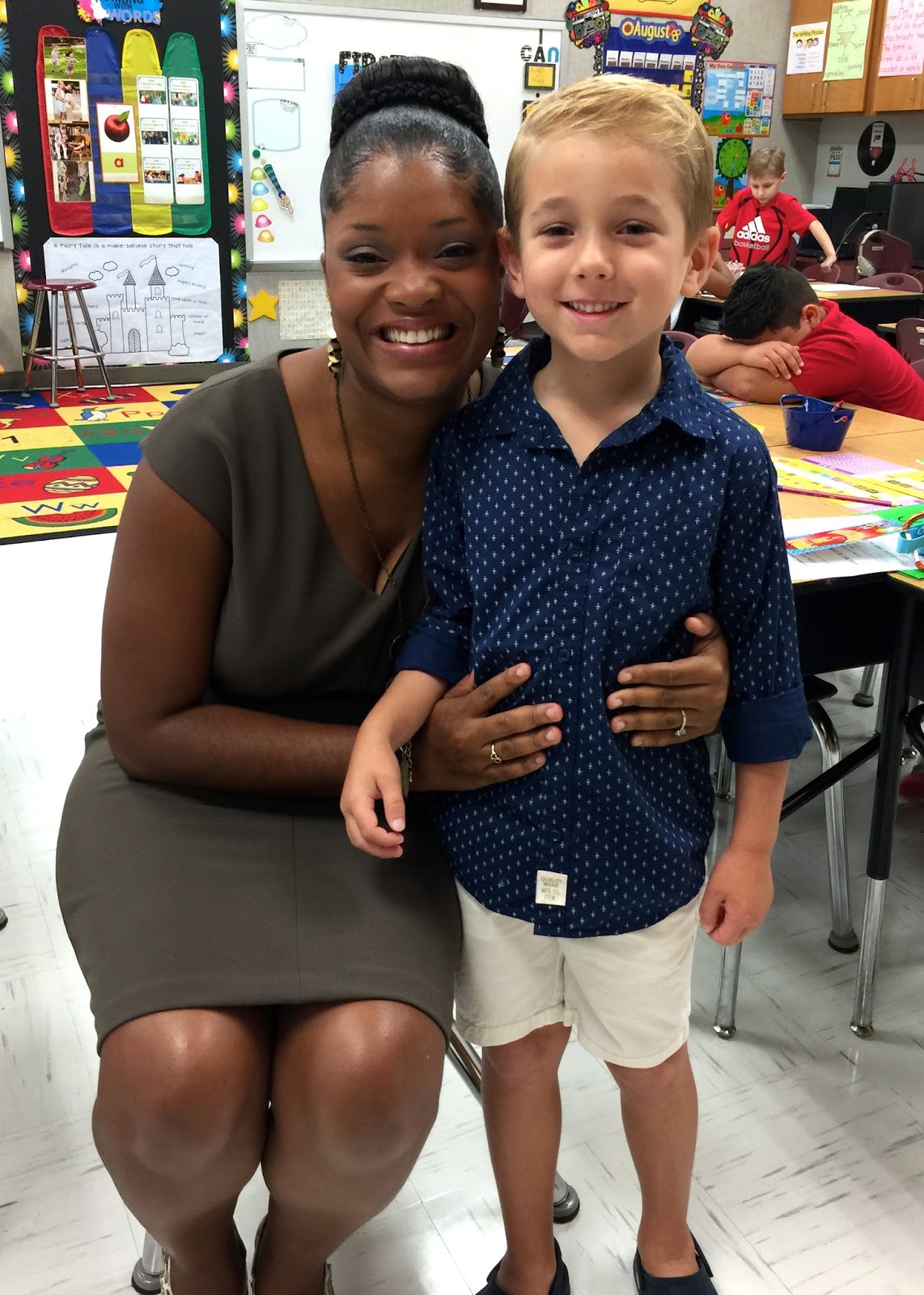 I’m very thankful that everything worked out where Zach or I are able to drive Kye to school each morning. He does have to ride the bus home as the pick up line is super long and would require the girls to get up early from their naps. It just makes more sense for him to ride the bus (especially because poor Tess is already in the car enough with dropping off Kye, dropping off Britt, and picking Britt up!). I’m thankful the bus is only elementary school kids and that it’s just to our neighborhood and that he’s the first stop dropped off AND that the stop is literally in our front yard 🙂

For the first couple of days he didn’t ride it. I picked him up the first day and Mrs. Charlotte got him the second day. Omg that carpool line was a legit HOUR! It was super sad to me when I picked him up that first day. He’d been SO excited for school and was so upset when he got in the car. He was overwhelmed with all the kids and their value systems. He couldn’t get over the poor choices they kept making and that kind of thing really affects Kye. He takes other people’s poor choices personally and felt bad for his teacher and just had a hard time understand how kids could choose to be mean. There are SO many kids and some of them cut in line on the playground and that really bugged him. Or they were all talking when the teacher said not to. Stuff like that, nothing major but it was all very major to Kye and it weighed him down and made it hard for him to have a good time.

It broke my heart and I was thankful we had that alone time together for him to just vent. I wasn’t too upset when he went to school the first day, but was more upset the second day! I was just worried that maybe Zach and I made the wrong choice and maybe it wasn’t best for him to be there. I wanted him to enjoy school, not dread it. I wanted him to be a light, not have his light dimmed.

Thankfully, with time, he adjusted and it’s been a fabulous experience overall. He’s made some sweet friends and is such a little teacher’s pet 😉 He is doing great with the school work and LOVES riding the bus home. He gets to be “second load” which means he gets to basically hang out awhile after school is over and that’s the highlight of his day! I am very, very proud of him and very thankful that he’s exactly where he is. I know things may change in the future but for now I do feel confident in our decision to send him to public school! 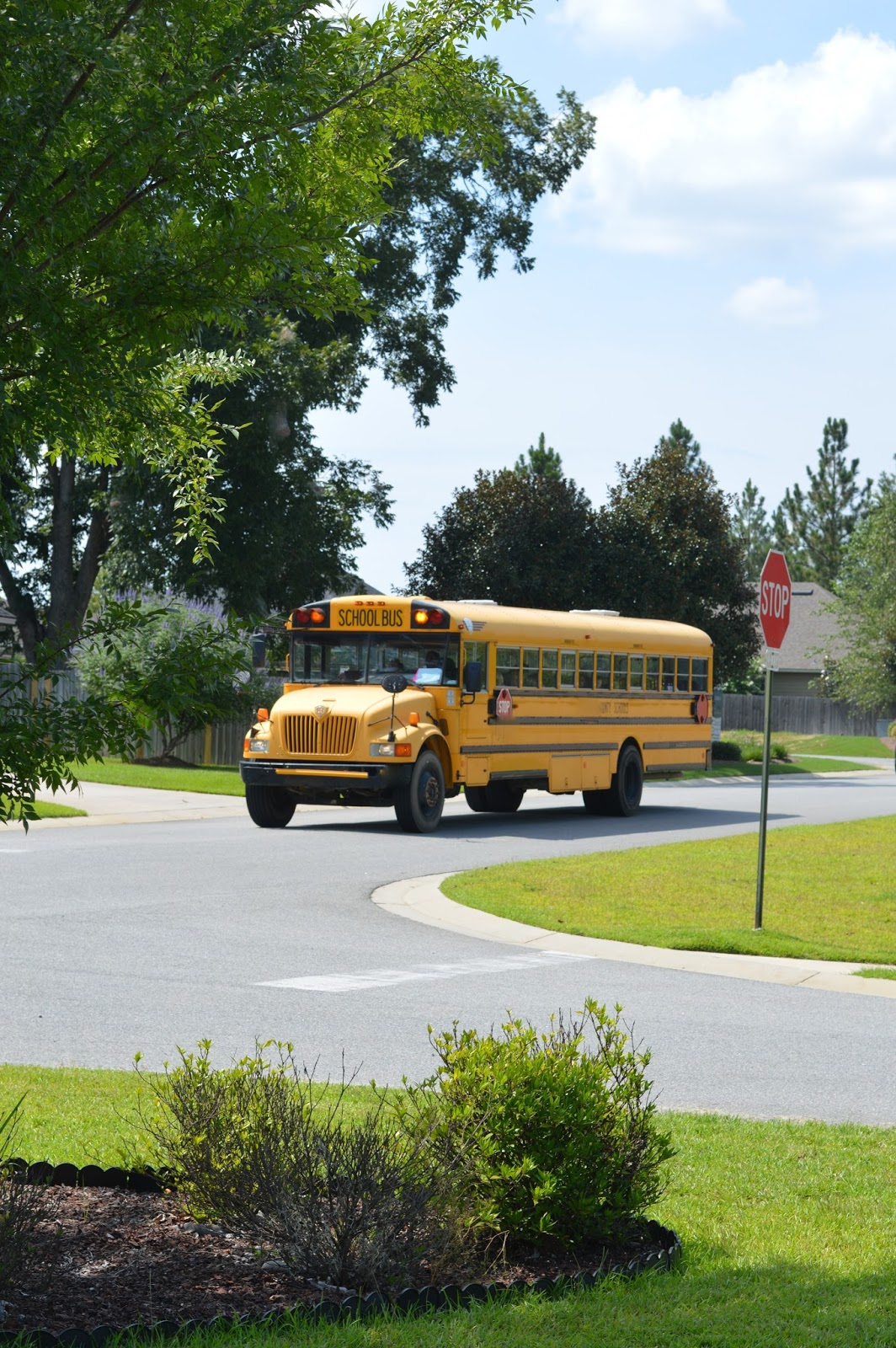 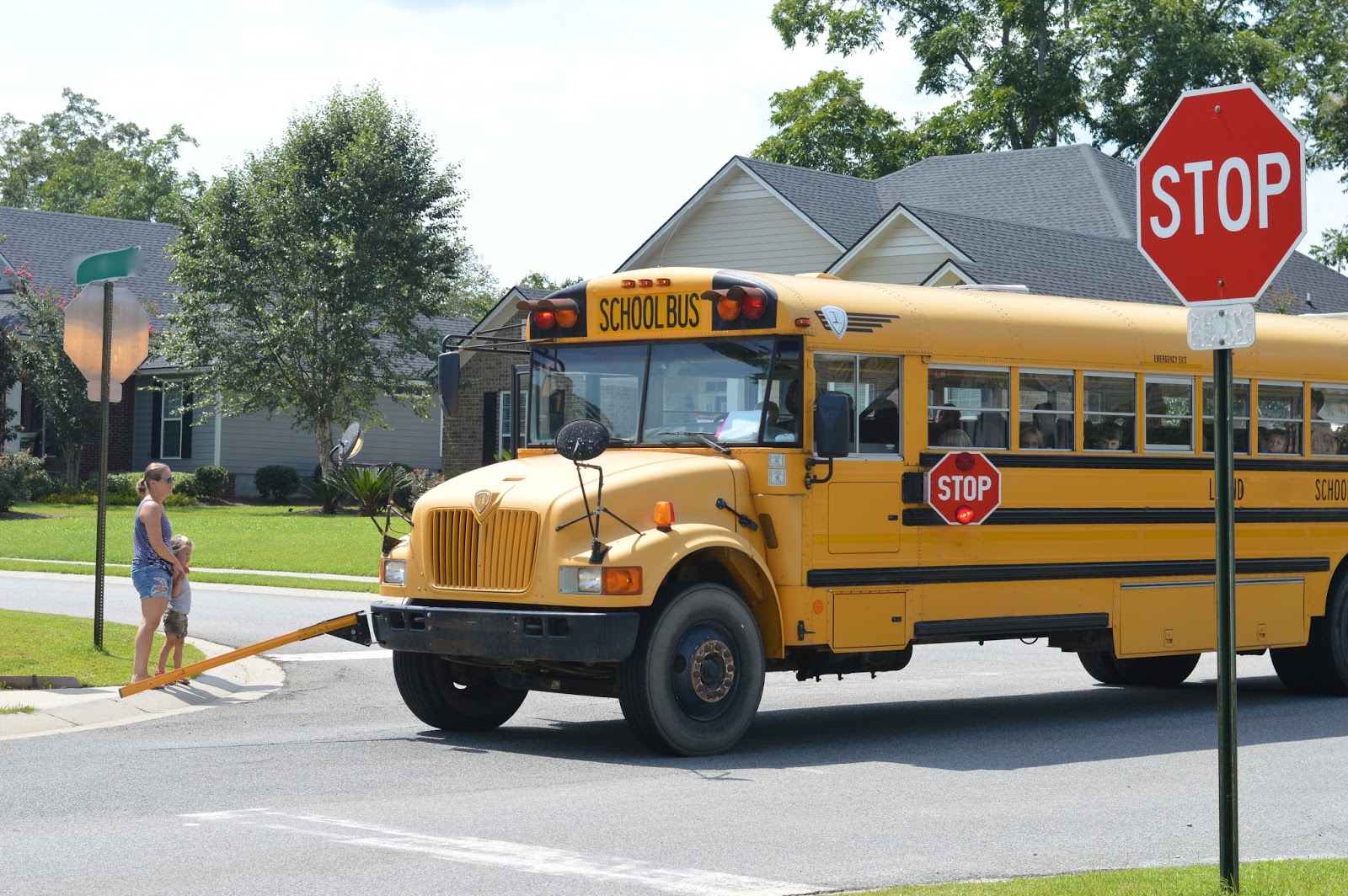 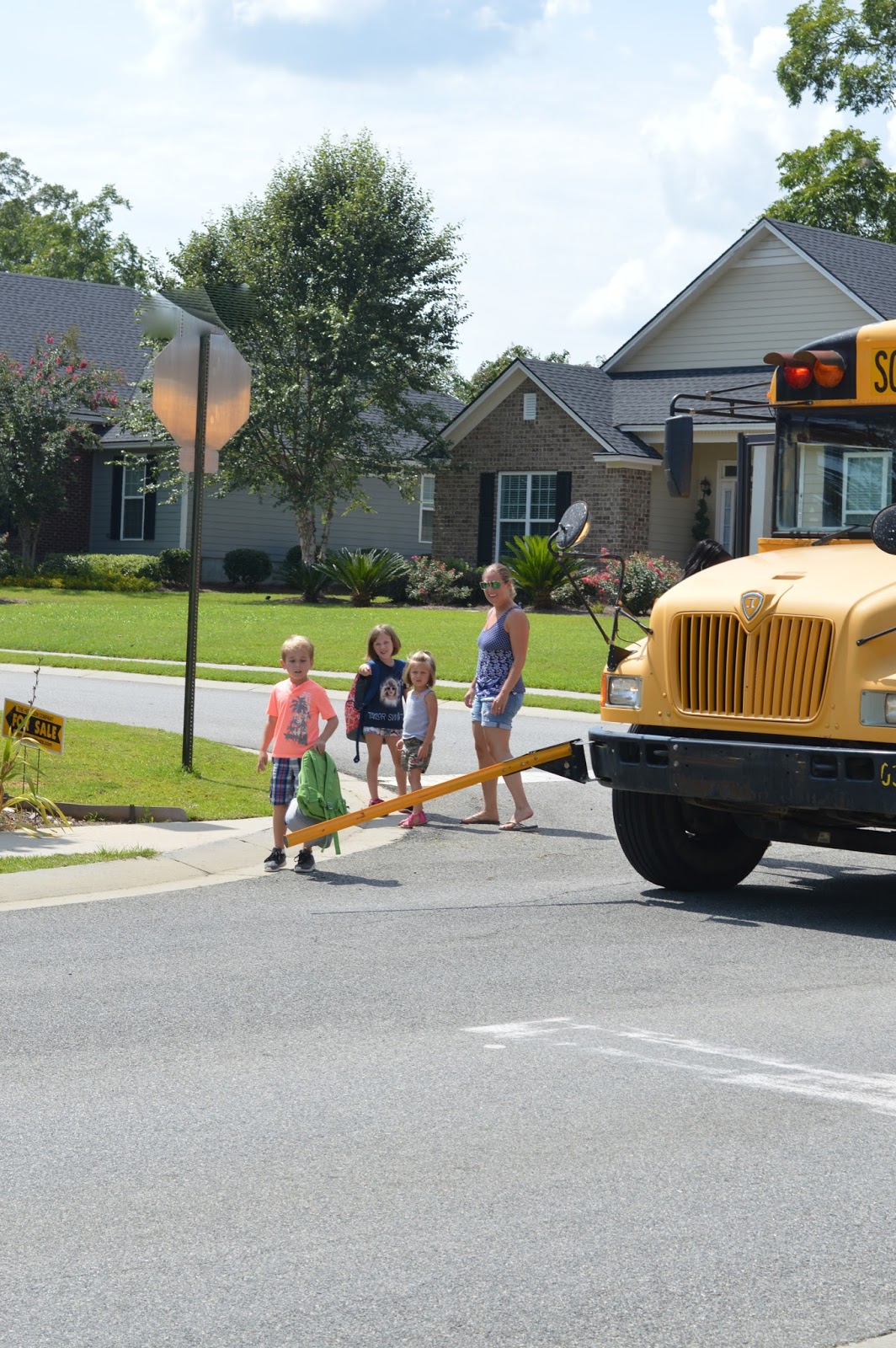 We are so proud of Kye and know he will continue to learn, grow and encourage others throughout his school career!