I am very good about doctors visits and appointments with the kids and always put the appointment into my phone and onto a hard copy calendar every time I make one. Kye had his 5 year well visit scheduled for a Friday afternoon at 1. I thought it was strange when I saw it on the calendar but I made the appointment back at his last well visit which was a year ago so maybe it was the only time they had available? Maybe I didn’t want him to miss school so I scheduled it at nap?

I arranged for Mrs. Charlotte and Payton to come over to the house after school and sit with Britt so I could take Kye to the appointment. He was pretty excited about it. I know that’s random but since my kids aren’t sick often they actually do enjoy the doctor…it means stickers and prizes from the treasure box 😉 We pulled in the parking lot and it was pretty empty but I assumed it was because they were all still at lunch. We got out and started walking up to the door and a lady stopped us and asked if we had an appointment and I said we did. She said “we aren’t opened” and I assumed she meant b/c of lunch break so I just said we’d wait outside until they were back from lunch and she said “no, I mean we aren’t opened at all. We close at noon on Fridays.” Ummmm. She was SUPER sweet and went inside and said that I did have an appointment that day. But that it had been at 9 that morning!!!!! I guess when I put it in my phone I accidentally put the wrong time! Their office had even left me a reminder message but I deleted it without listening to it b/c I “knew” when the appointment was! OOPS! I was pretty embarrassed about it and felt super bad for missing the visit (thankfully they didn’t charge me any fee or anything!). Kye was pretty bummed so we went to the gas station and got slushies. He got a little taste of every flavor they had and we surprised Payton with one too 🙂 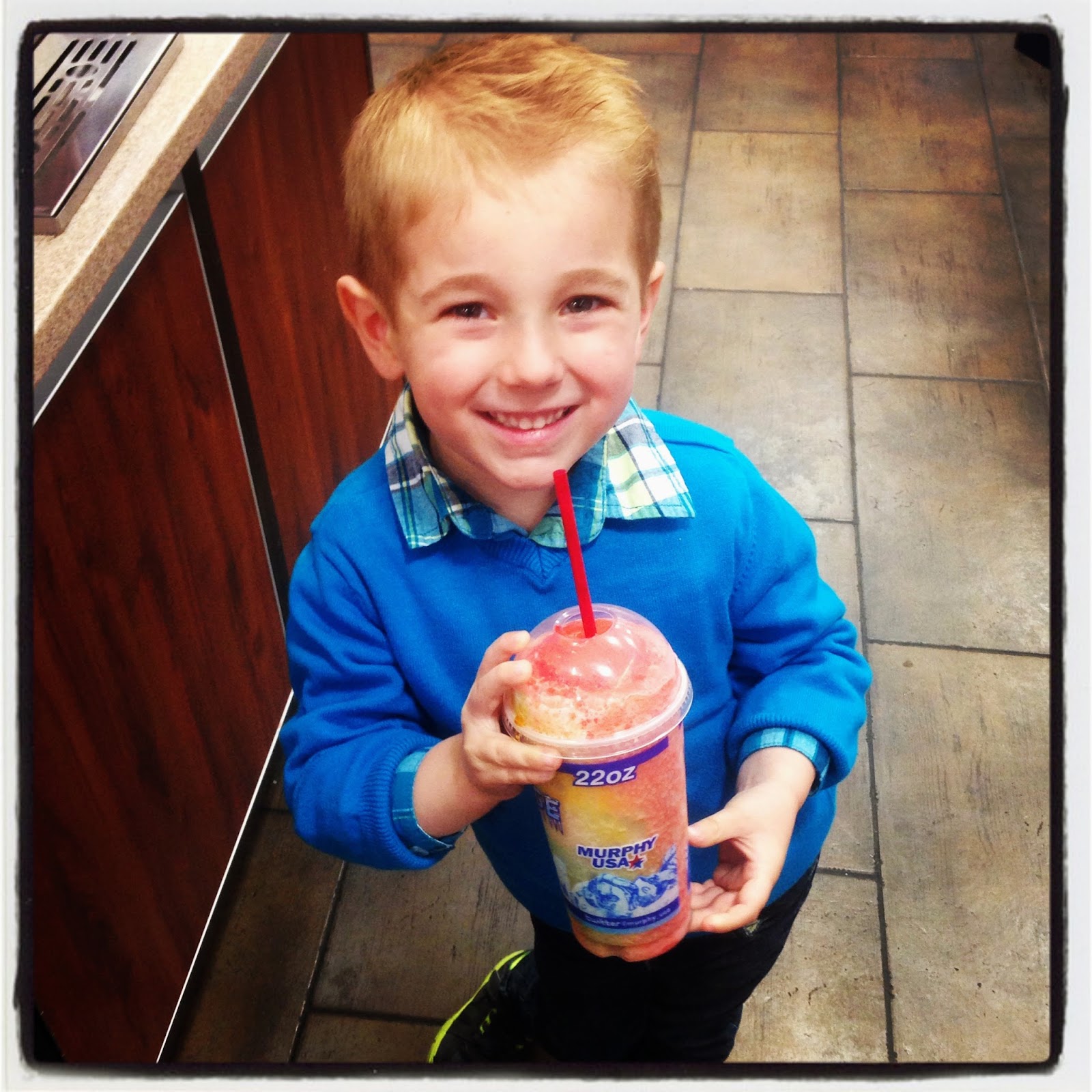 I called their office first thing Monday morning and, again, they were SO sweet (I am seriously IN LOVE with our pediatrician’s office!) and rescheduled us. Of course it wasn’t at an ideal time but I didn’t care. I took it! I had to pick up Kye early from school and had both kids with me and packed their lunch to eat at the doctor. I always make sure to go at one of the first appointment times of the day but beggars can’t be choosers so we had a good long wait. But the kids did awesome and enjoyed getting to watch the tv in the waiting room so it went by pretty quickly!

This year Kye didn’t have to get any shots so Daddy didn’t have to come 🙂 They did both the hearing test and the vision test. I wasn’t the least bit concerned about the hearing…but the vision had me nervous. I had to get glasses in 2nd grade so I’m just waiting for the bad vision genes to kick in!!! 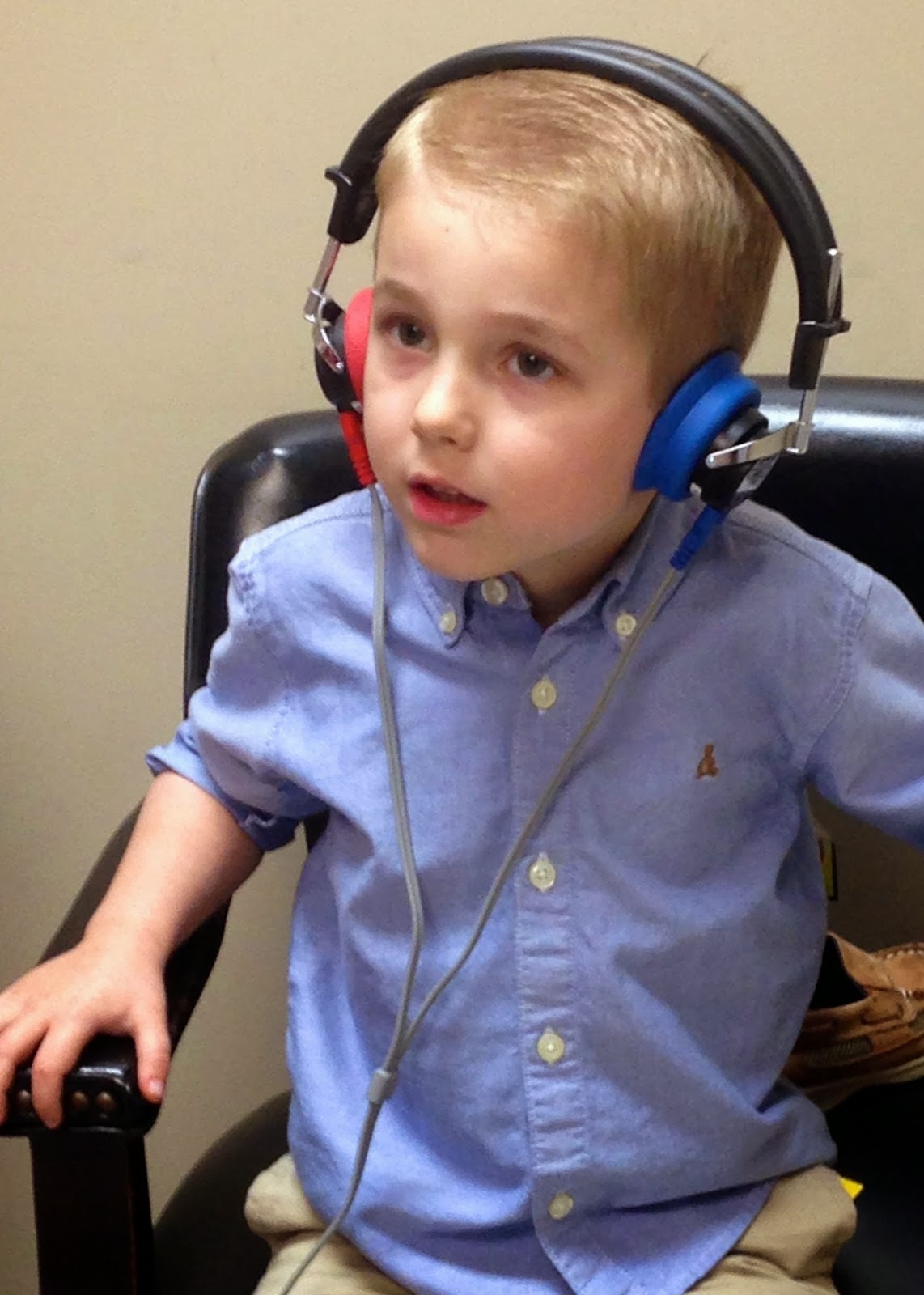 Did perfect on the hearing! 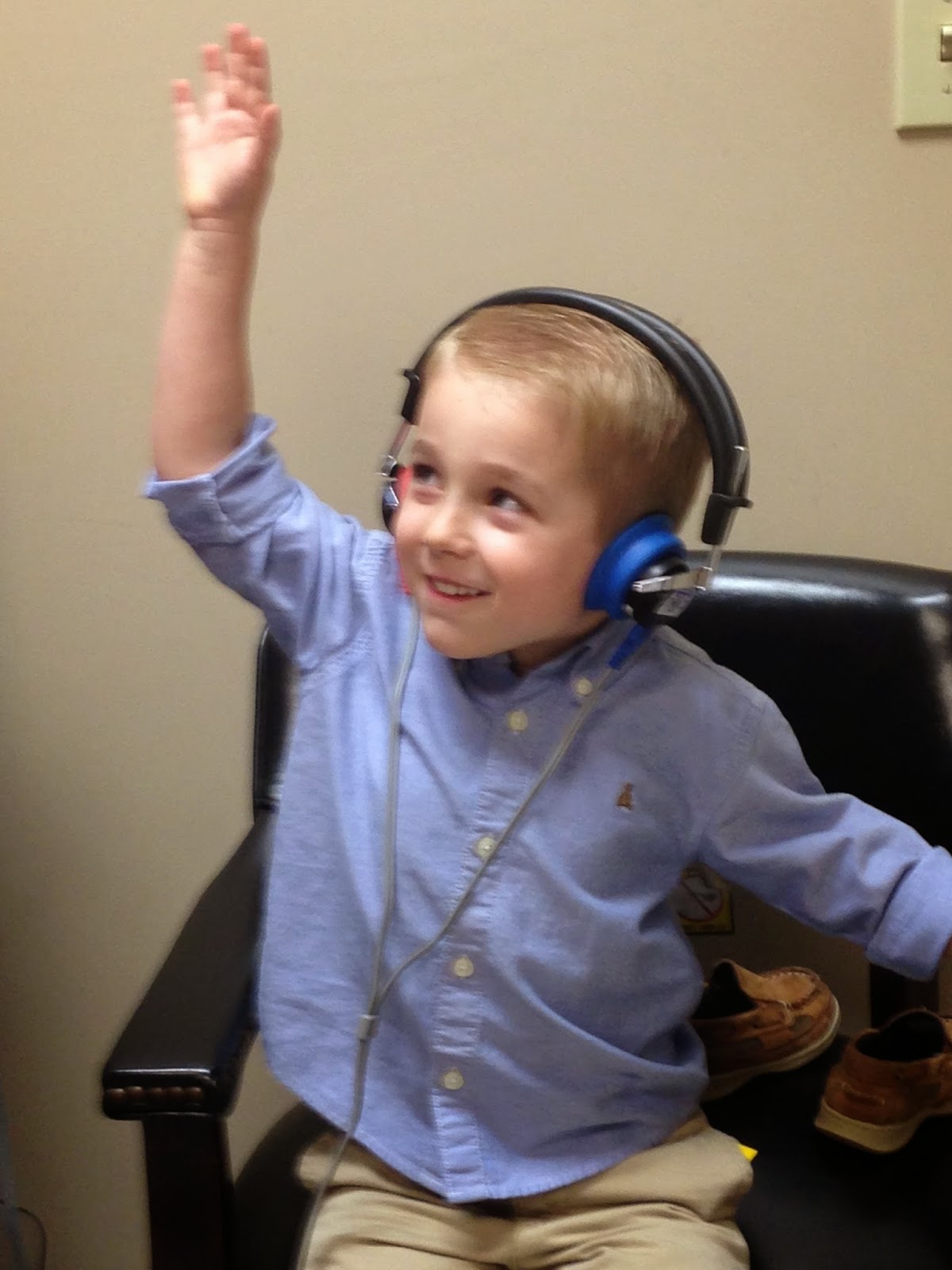 They said is vision right now is 20/30 which is great for his age. By age 6 we will want to see 20/20. They also said at 6 years old I should start taking him to the eye doctor. With our family history of bad vision it’s def something I plan on doing! I HATE the idea of him having to have glasses but I know it may happen so I’d rather be proactive about it for sure!

We had a good bit of wait time while in the room and I was thankful I brought the notebooks from Disney. Y’all. Buy notebooks for your kids! Seriously a LIFE SAVER!!! They were totally happy and content the entire time!!! 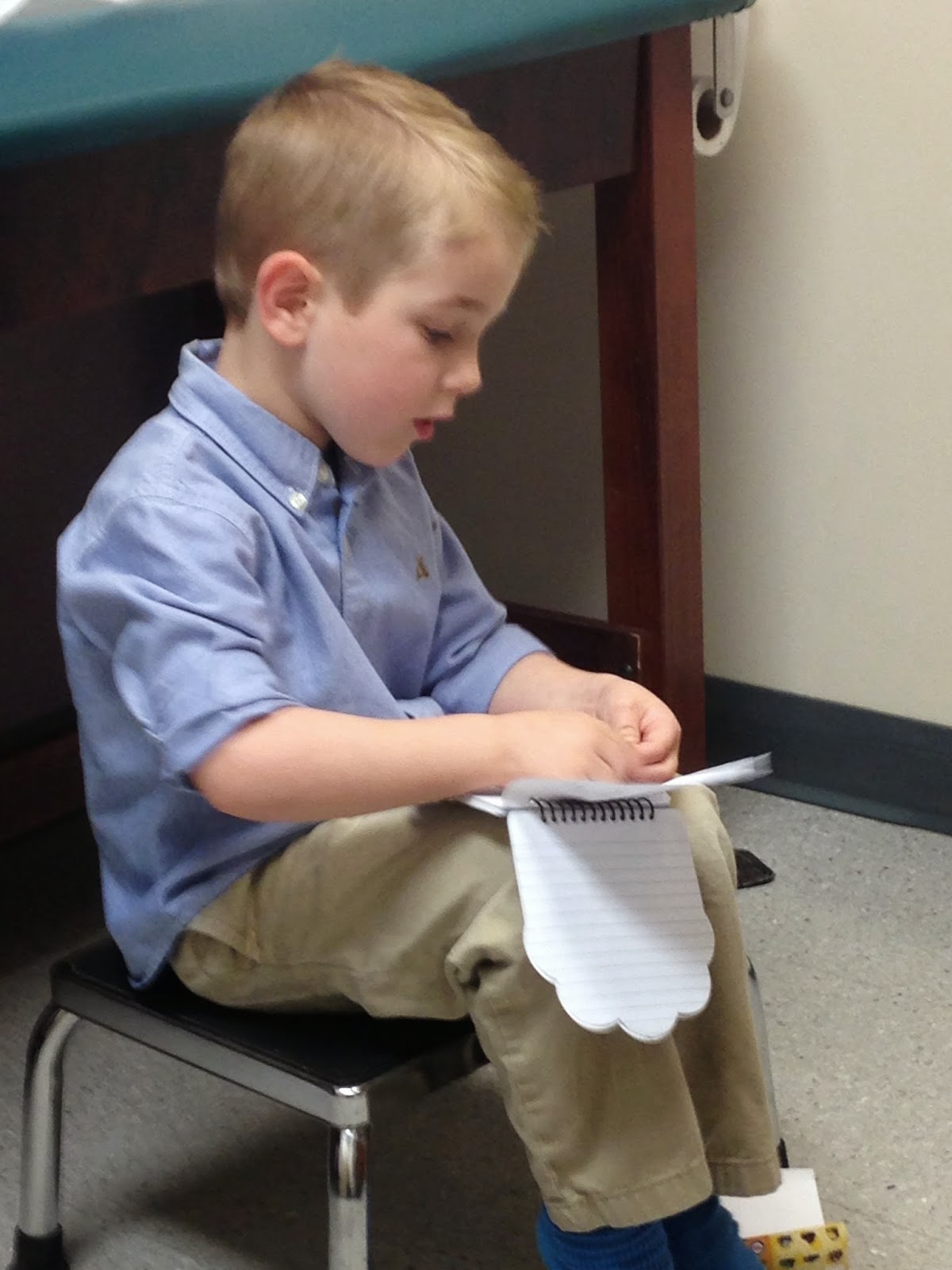 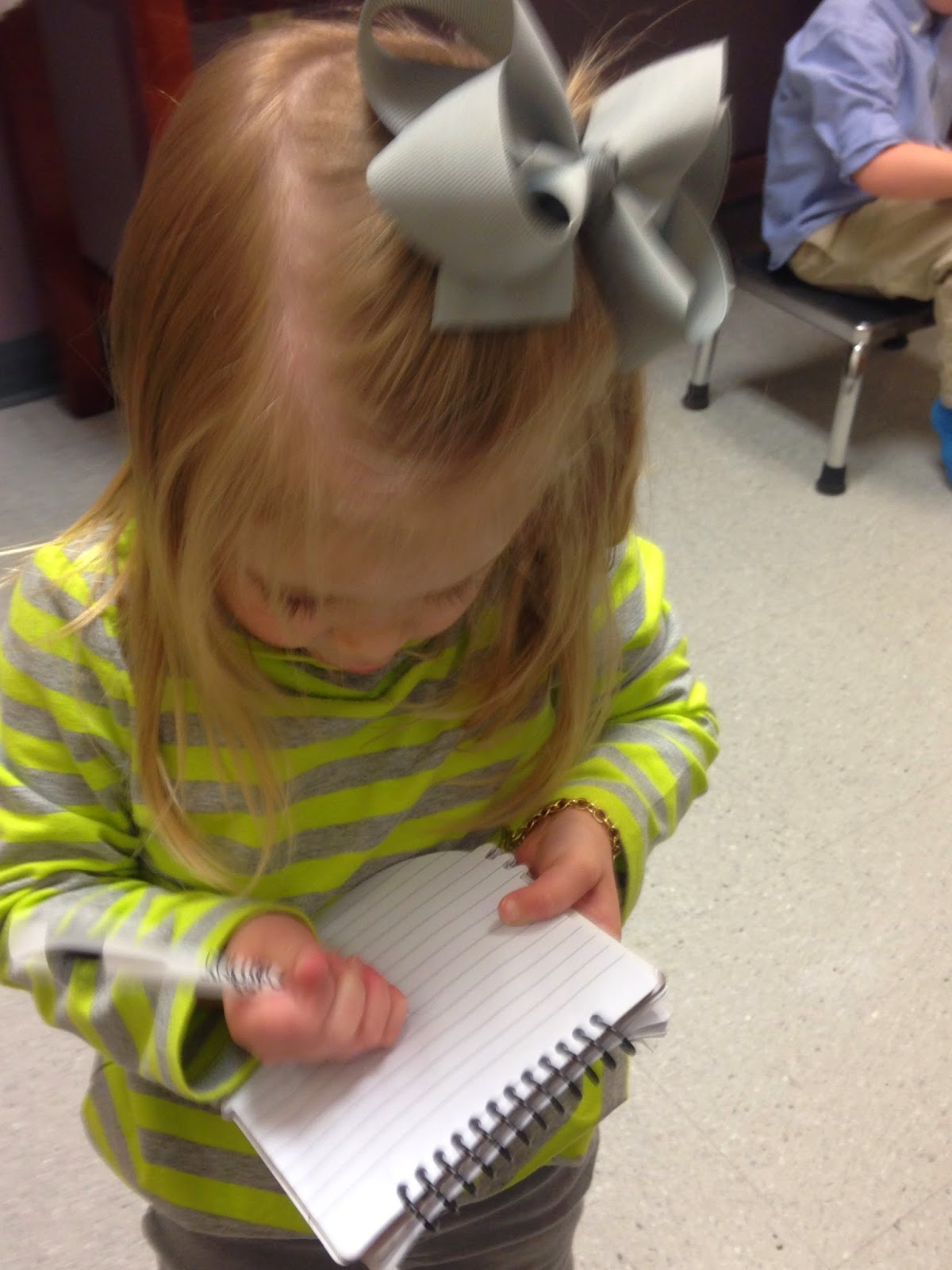 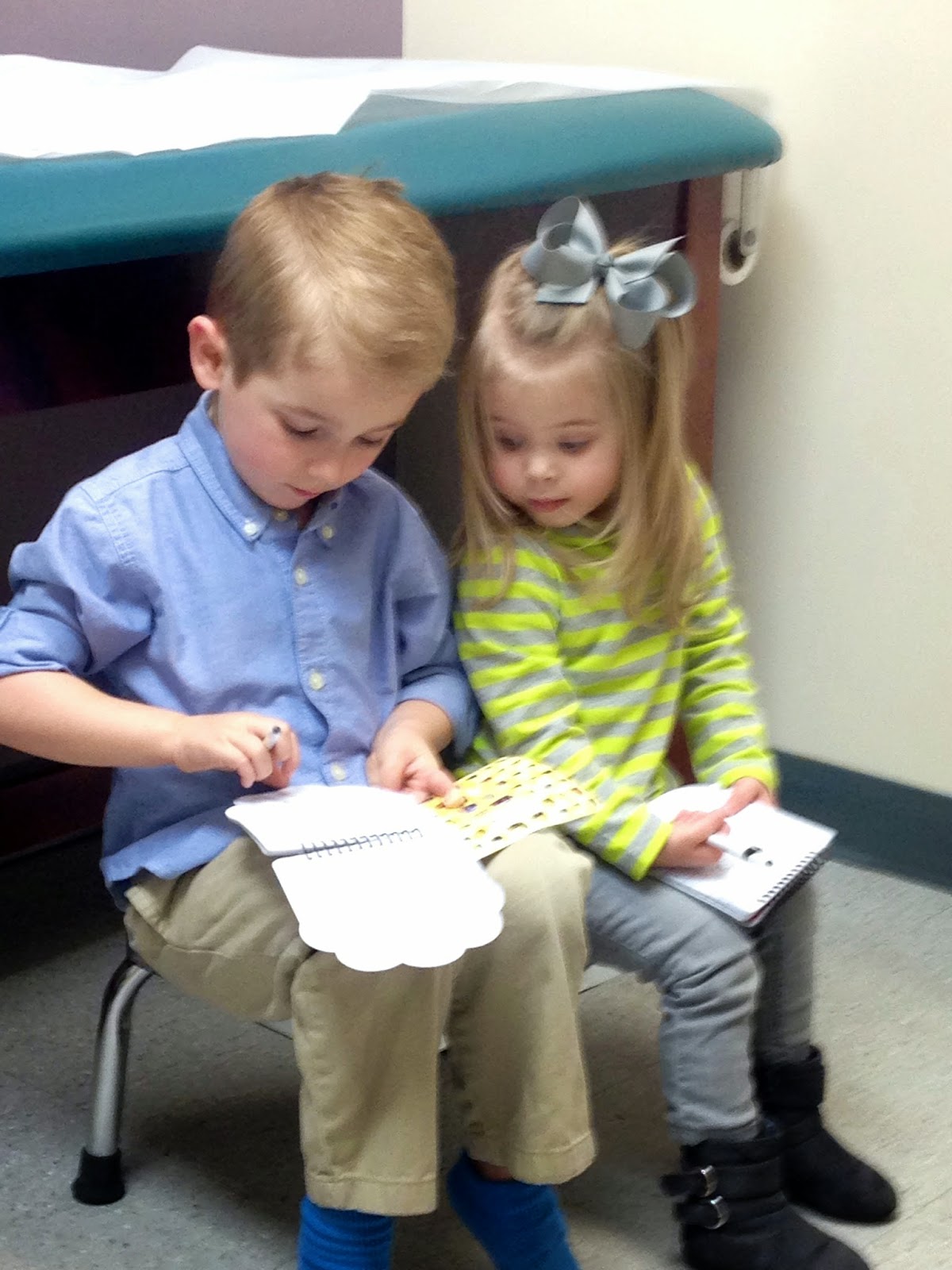 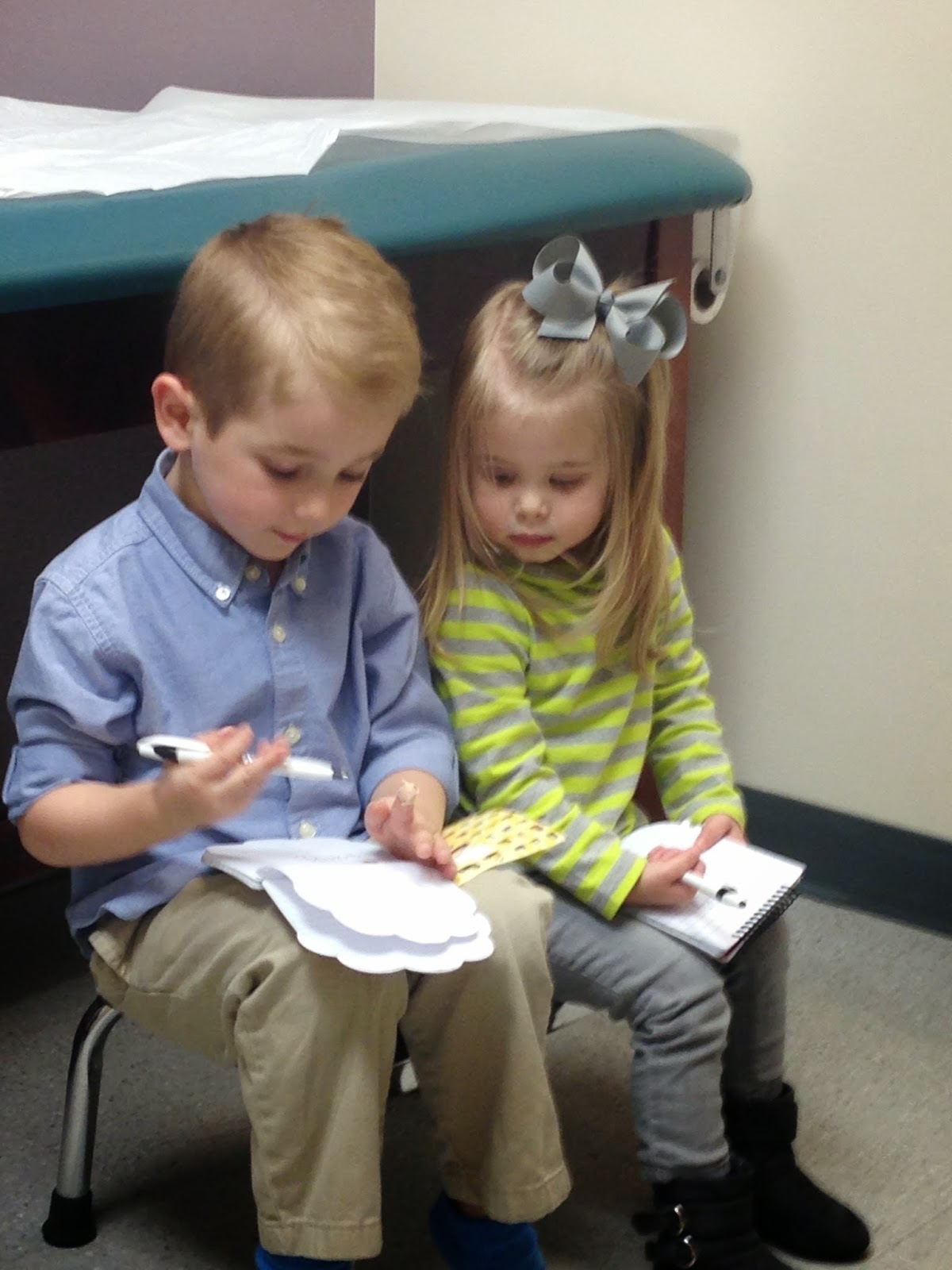 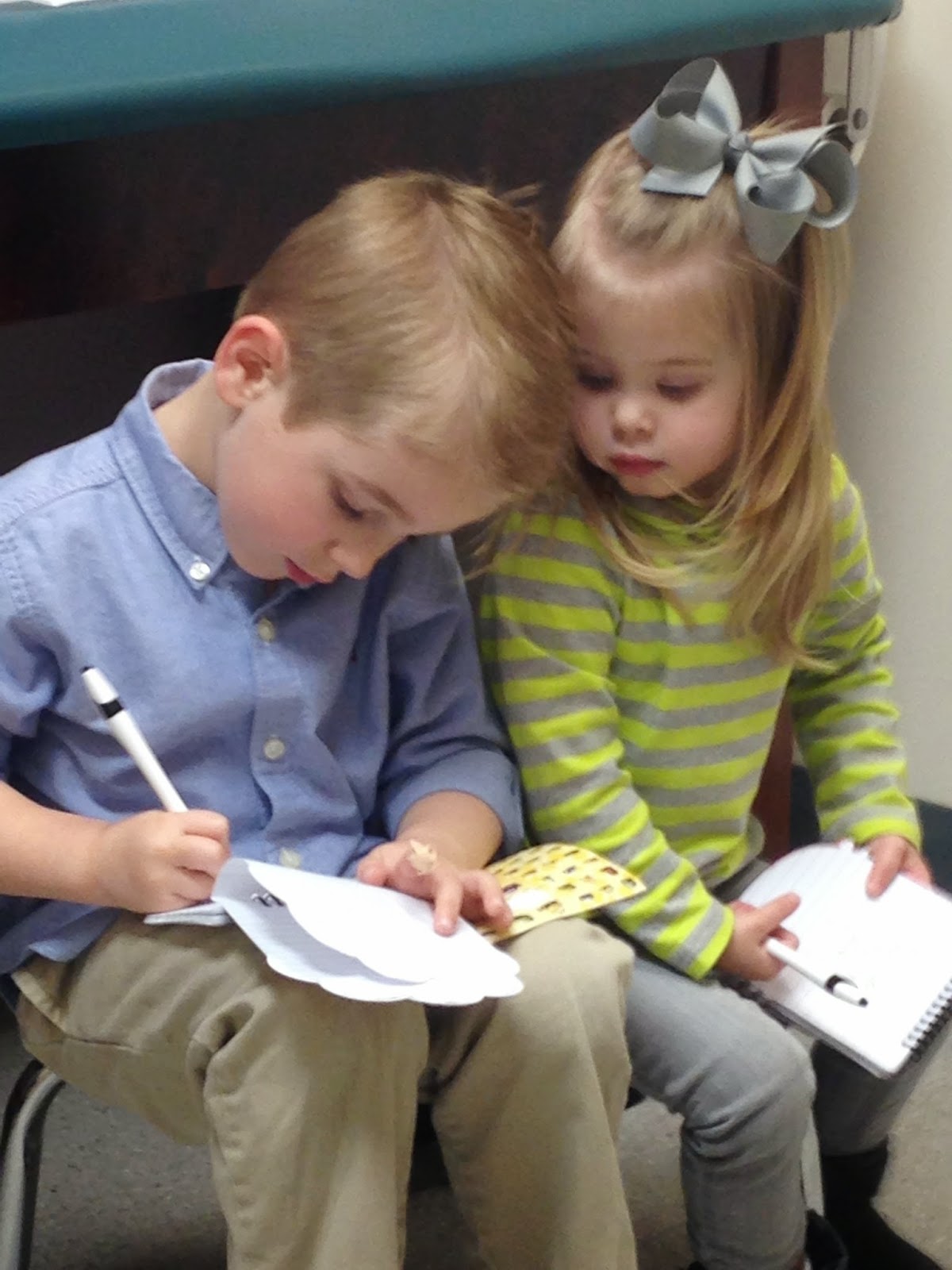 We saw Kelly, we I adore. I filled her in all about our GREAT report from the growth specialist  and she was thrilled with our news that he no longer needs to worry about going again! Based on their stats Kye is 42 3/4 inches tall, 50th percentile for height. And he weighs 42.5 lbs which is in the 70th percentile for weight.  He grew 3 and 3/4ths inches in one year 🙂 Pretty awesome!!!

His blood pressure was prefect and they did have to prick his finger but it was a BREEZE. He did great and it didn’t bother me 😉 His hemoglobin came back at 11.7 which is good. His BMI is in the 85th percentile which is the high end of normal. And that concerned me! I talked to Kelly about it and told her that the growth specialist wanted us to continue to give him 24 oz of milk a day but that I didn’t want his weight to be an issue either. She said he’s totally healthy and in a fine range on the BMI and that with his growth history and stuff giving the milk is more important so to just keep doing that. Honestly, the BMI thing doesn’t surprise me. I have ALWAYS been in the high end of normal too. People are usually shocked when I tell them my weight b/c I don’t look as heavy as I am. Kye is the same way. Boy is HEAVY!

I had a good bit of questions for her:

The BIG thing we talked about was pertussis. Stacy has made a big deal about it at my visits and I was interested to see what the kid’s pediatrician would say. And, yup, Kelly made just as big of, if not a bigger, deal about it too! This is SERIOUS STUFF guys!!! Post to come about it as well but she gave me some GREAT literature about it and about the vaccines and told me that she does not want me taking Leo to church until he or she has had their 2 month shots and still wait an additional 2 weeks after that. We have had TWO babies DIE from pertussis in our town. So it’s not something to take lightly!!!

Overall it was a wonderful appointment with great news all around. I was extremely proud of Britt’s behavior. She did awesome! Both kids did, but I tend to expect that of Kye 😉 We got home plenty of time before naps and made our appointment for next year…AND I made sure to put the right time in my calendar this time around 😉

You can compare to Kye’s 4 year well visit here!