All the parenting magazines and such mention taking your child for their first dental cleaning around their first birthday. I asked about it at Kye’s well visits and they said around here you wait until they turn three. So wait I did!

We do not have dental insurance. Yes, Zach sells Aflac but Aflac is supplemental insurance. A LOT of people get confused about that. He sells policies that pay cash directly to you, not to the drs. The Aflac stuff pays certain set amounts for each item, no deductibles or co-pays whatever. We have practically every Aflac policy available (Cancer, Accident, Hospitalization, Sickness, Life) but we don’t have the dental. We also don’t have dental insurance through our major medical provider. Since Zach is considered self-employed (he is strictly commissioned based for his earnings with Aflac, they 1099 us for it all) we can’t get on a group major medical plan. That means we have super high deductibles on each of us ($5,000. Yikes) and pay a ton per month for our coverage ($560 for our young, healthy family!!!). I am a big believer in insurance and that it’s a need…but it just doesn’t make sense for us, at this stage of life, to have dental insurance on top of everything else we already have and on top of all the bills we have to pay each month. Instead I set aside a certain amount of money each month to save for health expenses. Zach and I both visit our local dental school (Wiregrass technical college) and get our teeth cleaned there (cleaning AND x-ray is under $30 TOTAL!!!).

While Wiregrass takes children as patients, I just don’t feel comfortable taking my child there. Especially not for his first visit. Growing up I always liked the dentist (Dr Cynthia Jones up in Lawrenceville…if she’s still practicing they rock!) and I wanted to find somewhere very “kid friendly” for Kye to go. We actually only have ONE pediatric dentist in town!!! That made it easy 😉 I did call around and do some price checking just to see and it ended up costing the same to get his teeth cleaned there as it did the regular dentist offices in town. So it was a no-brainer!

We had our appointment nice and early so we got up and took Britt to stay at Mrs. Charlotte’s then went back to the dentist. To prepare for the first trip we have been reading several books including: The Tooth Book and The Berenstein Bears Visit the Dentist (which was actually my book as a kid!). We floss Kye’s teeth daily already and made an effort to talk up the dentist a lot. About how big boys get to go there and how the dentist will check his teeth and help keep them healthy etc. I was pretty much 100% confident that he’d do well. I’m big about preparation for things and, so far, I feel like there have been very few situations where Kye wasn’t prepared to handle them well 🙂 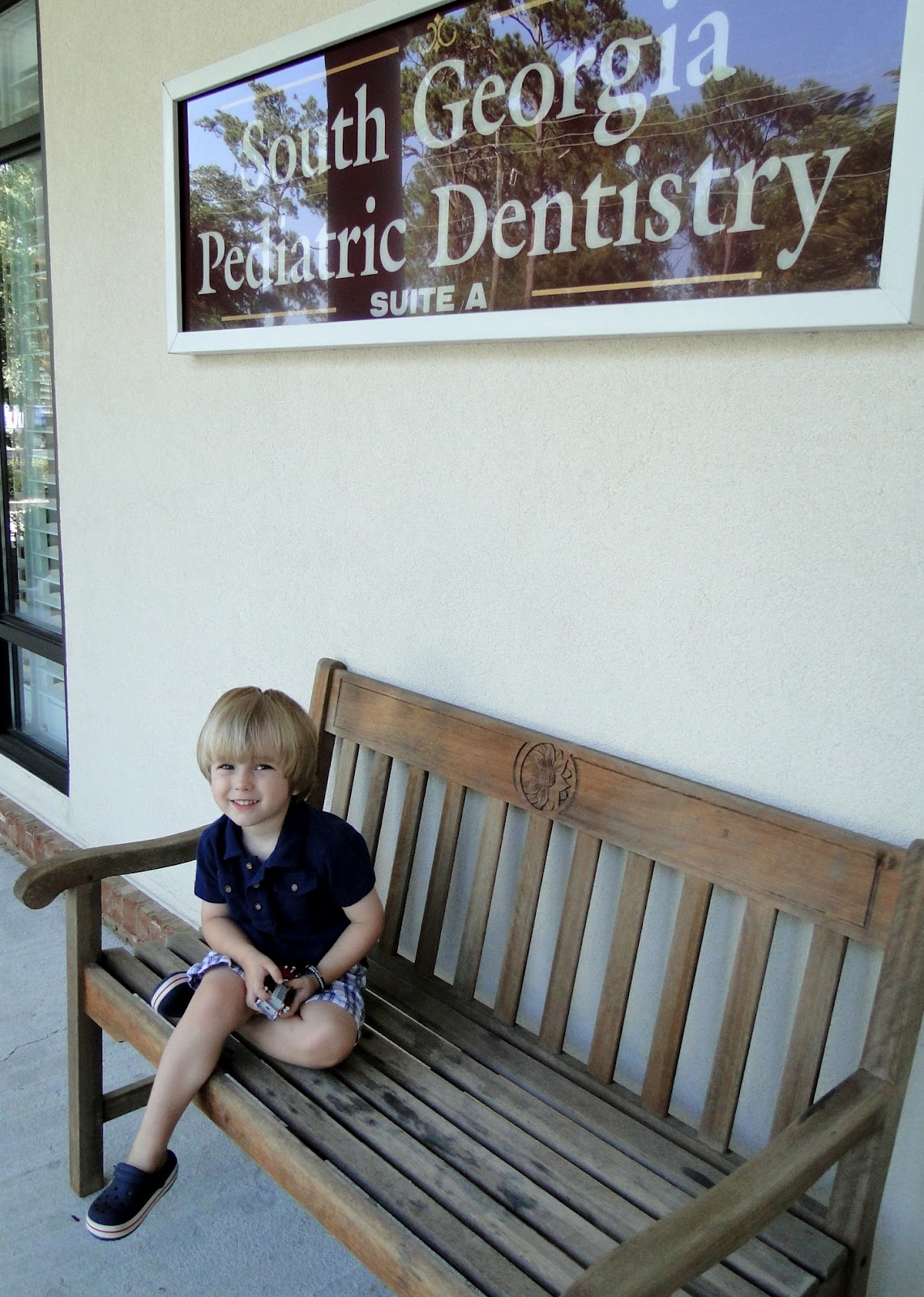 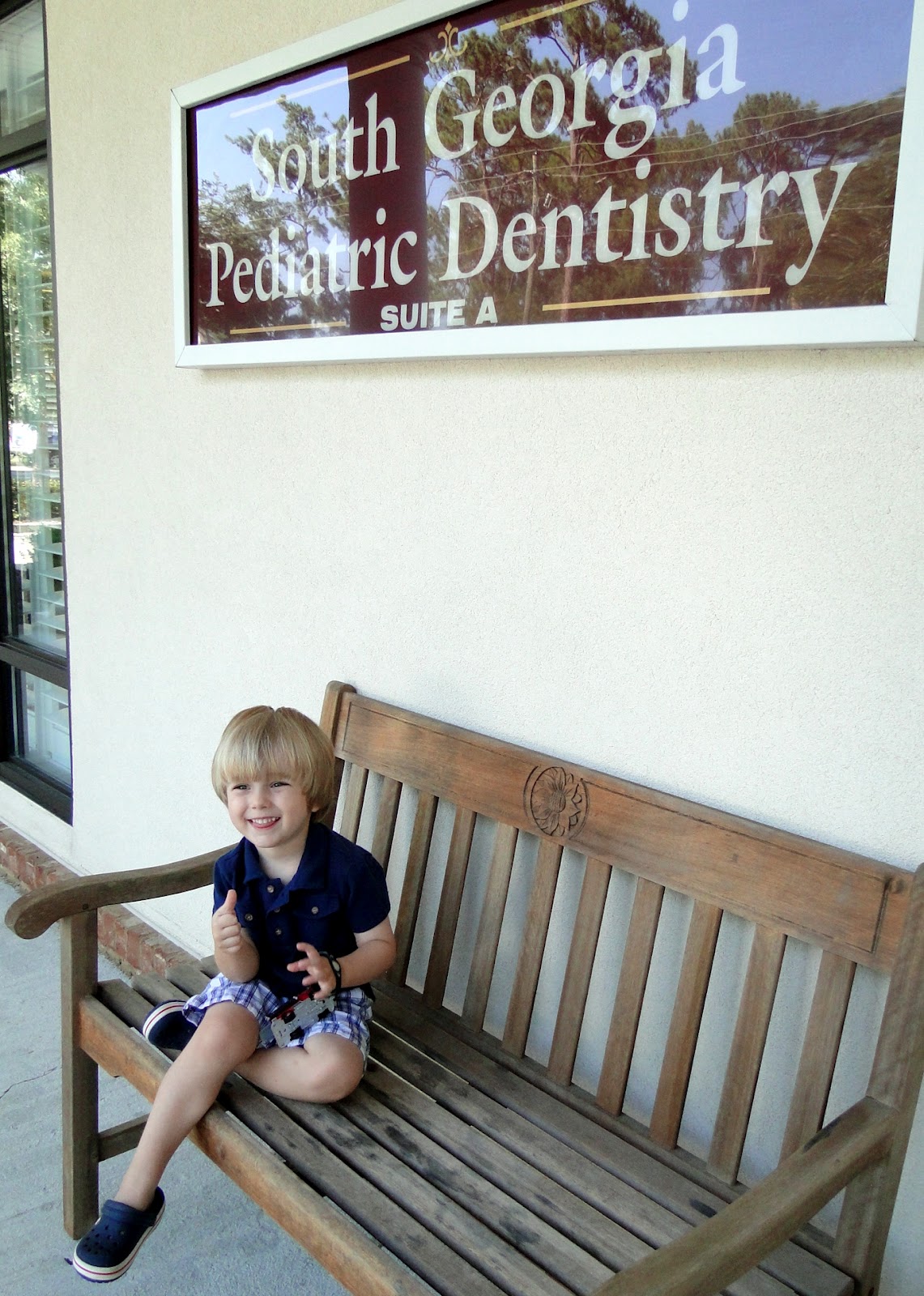 And this strange hand signal ???

Yes, he’s wearing a Power Balance bracelet. Zach didn’t like how he liked to wear my bracelets around the house so he gave it to him. He has awesome balance now…haha 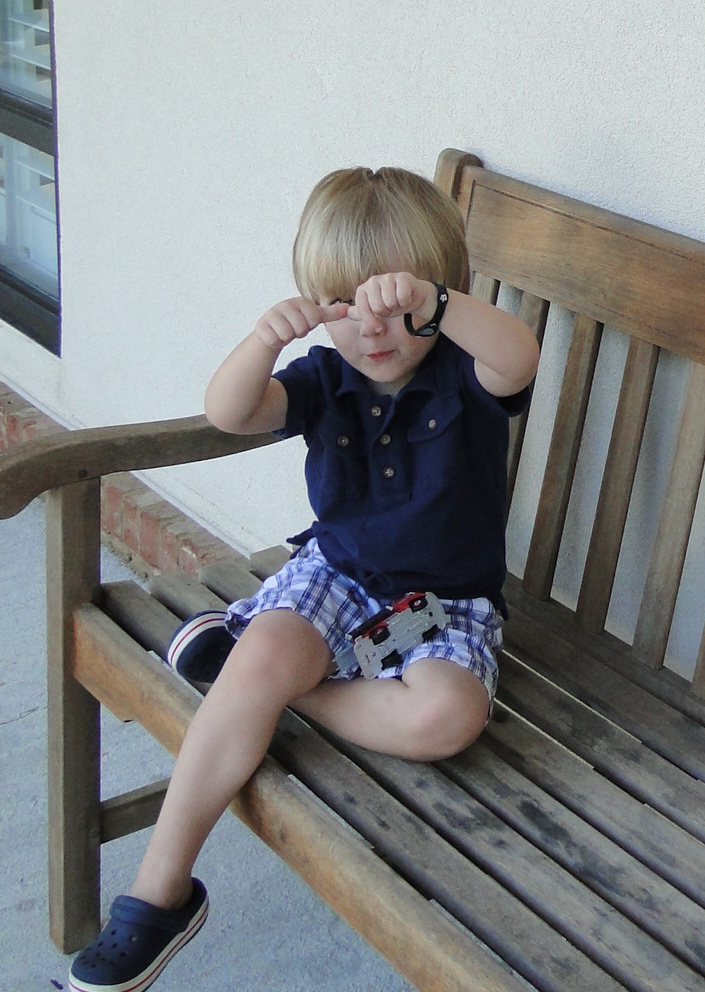 Right off the bat I was impressed with this dentist office. The waiting room was SO kid friendly and just happy. When we went back the staff went above and beyond in making sure he was comfortable, happy, and that we both understood everything that was going on. Amy ended up being the hygienist who saw us and she actually goes to our church! So that made it even better!

On top of the friendly atmosphere they have tv screens in the ceiling. Um. Kye didn’t need any preparation after all! He was a ZOMBIE the entire visit. We don’t watch tv at home so when he does get to watch it he gets pumped. She could have done anything she wanted to his teeth and he wouldn’t have noticed. He did AWESOME and it was all a breeze!!! He even got x-rays and handled it like a pro 🙂 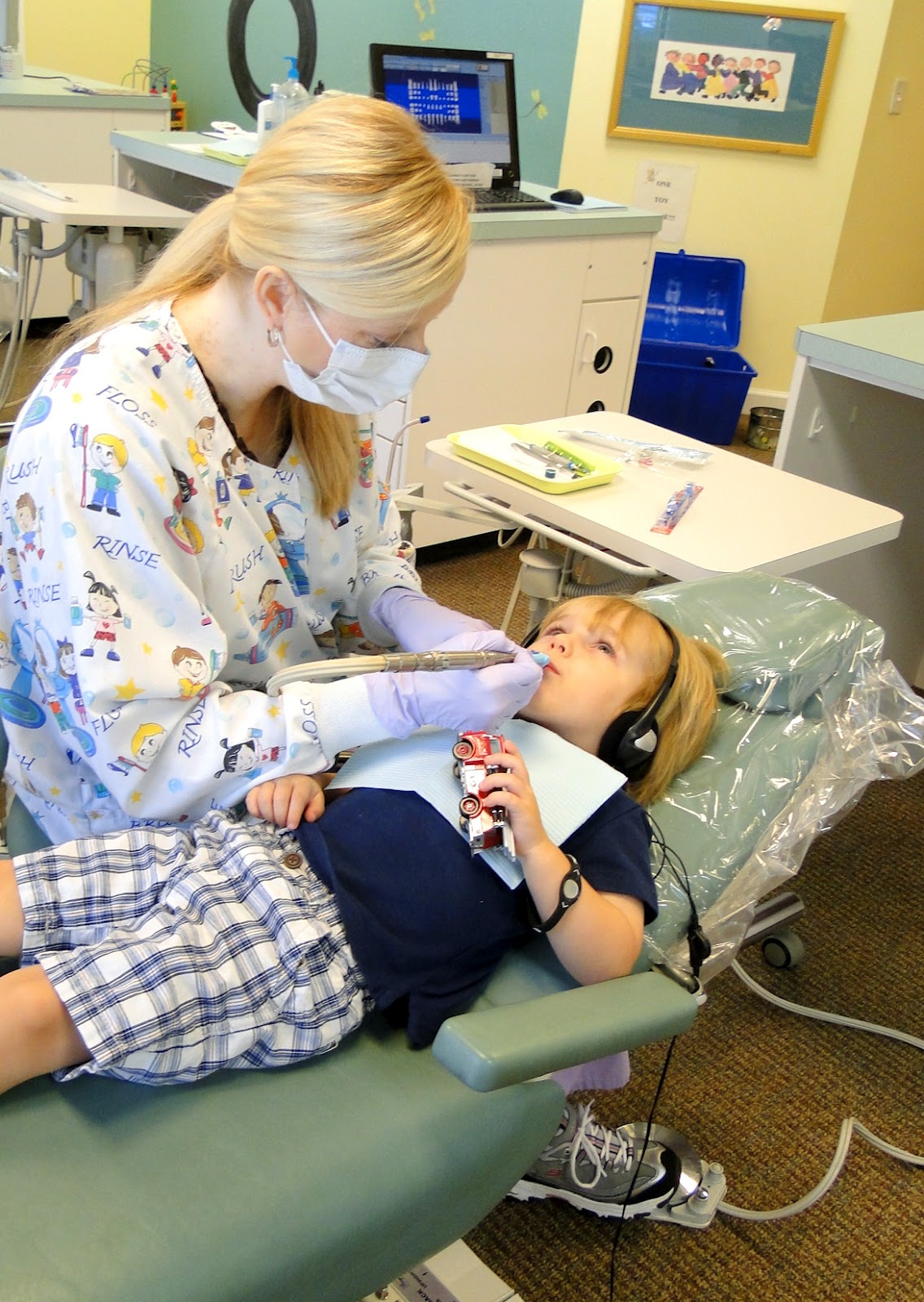 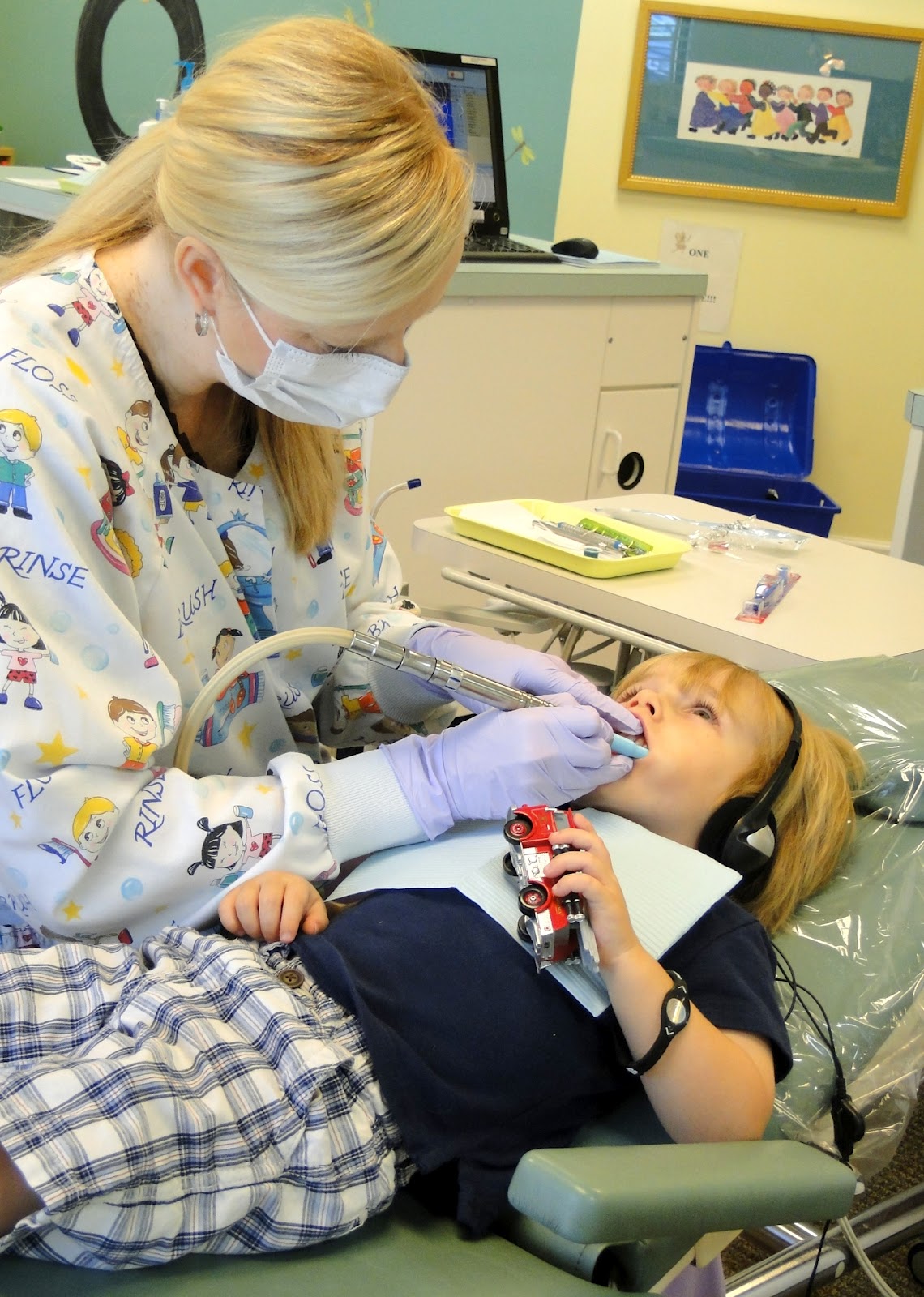 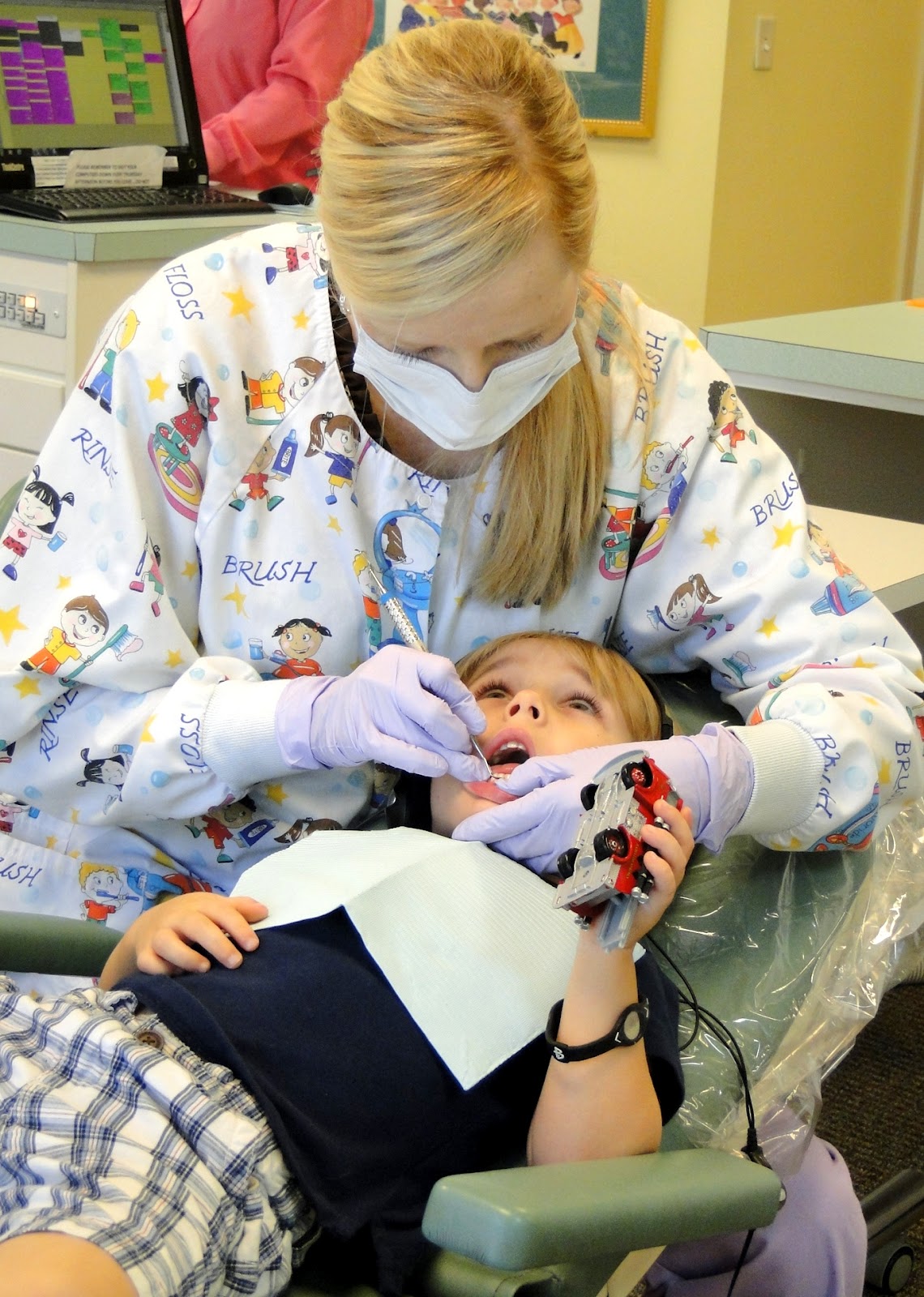 Everything looked great! No cavities or issues. Since Kye’s baby teeth first came in they have been kinda discolored. I’ve always asked the pediatrician about it and they said it was most likely caused from him having a fever when they broke through (which he ALWAYS had). I asked the dentist office about it and they said that the discoloration is actually most likely from something that occurred while in the womb. A sickness I had or something along those lines. Awesome. Don’t you just love the guilty mom feeling?!?! Thankfully it shouldn’t affect his permanent teeth. Unfortunately there isn’t really anything I can do to prevent the issue from Britt’s teeth since it was something that happened during pregnancy. If that same thing happened again while I was pregnant with Britt it’s too late to do anything about it!

Amy did tell us to work on flossing better in the back (it’s tough to get back there!) and that he’s old enough now to start using the fluoride toothpaste. Since the appointment we’ve started working on having him SPIT when brushing. Um, it’s kinda a tough thing to teach!!! And when you’re in a rush it’s a tough thing to remember to do. Something we’re working on though for sure. They did a fluoride treatment on him and it’s SO COOL how it is now. I remember feeling tortured as a kid with that junk and now they just paint on something to his teeth and he’s good to go! Super awesome! He could even eat and drink right away 🙂

When we met with the dentist he was very nice (no clue what his name was…). I mentioned that Zach and I have very opposite teeth. I have always had a TON of space…actually too much. I had quite a bit of gaps in my front top teeth and ended up getting veneers as my dentist even said that braces would most likely not fix the issue. Zach’s teeth were all so crammed that they had to pull some to be able to even give him braces. The dentist said that Kye has his daddy’s mouth for sure so we might ought to start a braces savings account 😉

I did ask about Britt and when I should bring her in. They said to keep brushing her teeth as we’re doing and to bring her when she’s around 1 years old. I’m not sure if I’m going to do that or not. I feel like that is SO young??? Kye rocked out for the appointment but I can’t imagine a 1 year old doing very well??? I’d love to hear some of your thoughts on this!!!

Overall I was BEYOND impressed with South Georgia Pediatric Dentistry! If you’re local I HIGHLY recommend them for your child, especially that critical first visit!!!

When we left we raced back to Mrs. Charlotte’s so I could nurse Brittlynn then Kye and I had a lunch date. I was hardcore into my 24 Day Challenge and wanted to eat well so we went to Applebees. I was able to order some grilled chicken with freshly steamed veges and some brown rice 🙂 I was all excited for some quality alone time with Kye but boy is he a DUDE. He did not want to talk to me. I asked what he was thinking about and he said “I’m thinking about when the food will get here.” Is he is father’s child or wwwwwhhhhat?!?! If Zach is hungry it’s ALL he can think about. Guess Kye gets it honest!!! He did talk to me a little bit but then said he needed to stop talking so he could think more about when the food would come 😉 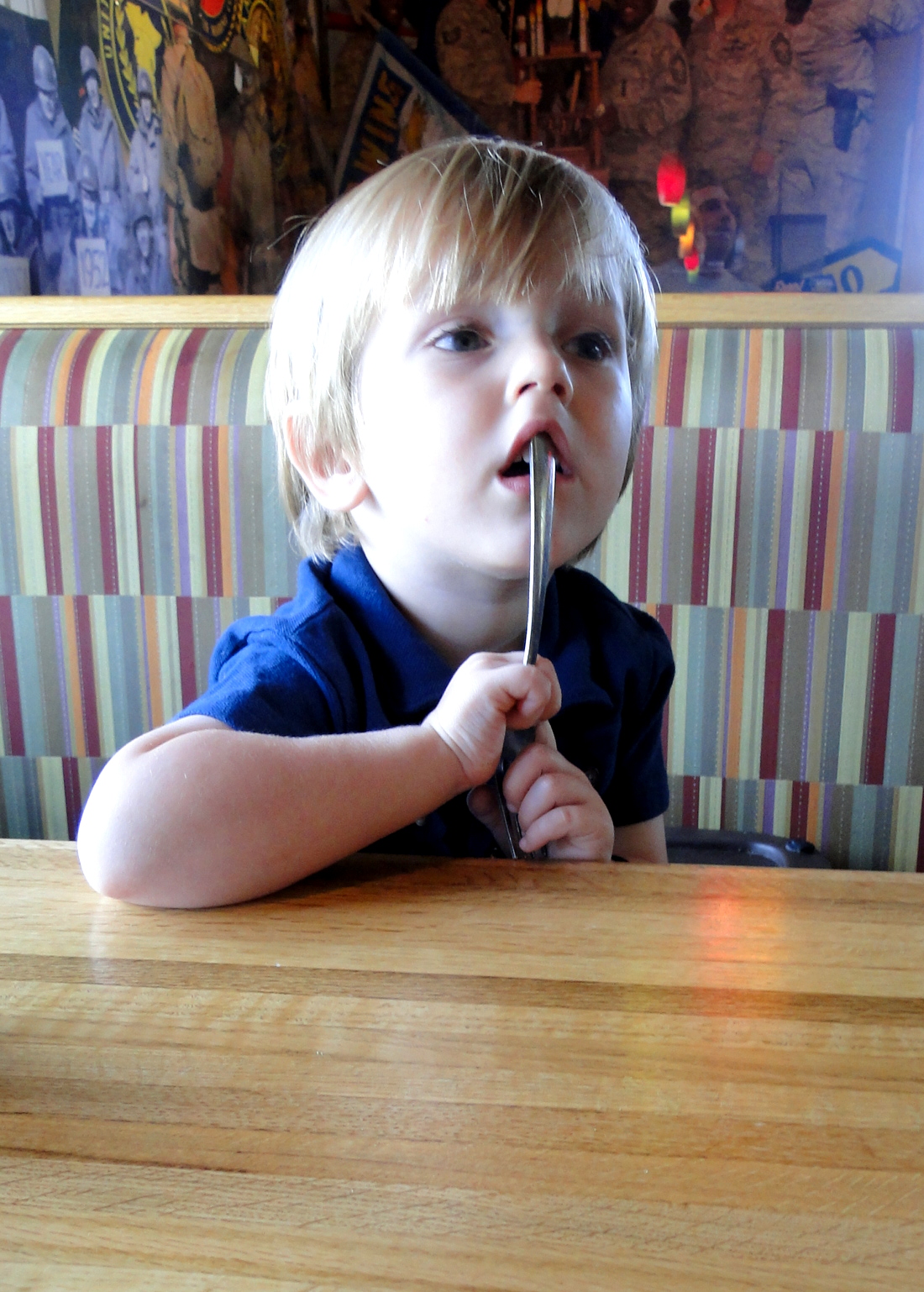 It probably doesn’t make much logical sense. Go to the dentist then eat some brownie and ice cream afterwards…but it was only $1!!! Isn’t that awesome? It was the perfect portion for him and a great special treat for doing such a great job at his first dentist appointment! Be proud of me…I only ate ONE bite 😉 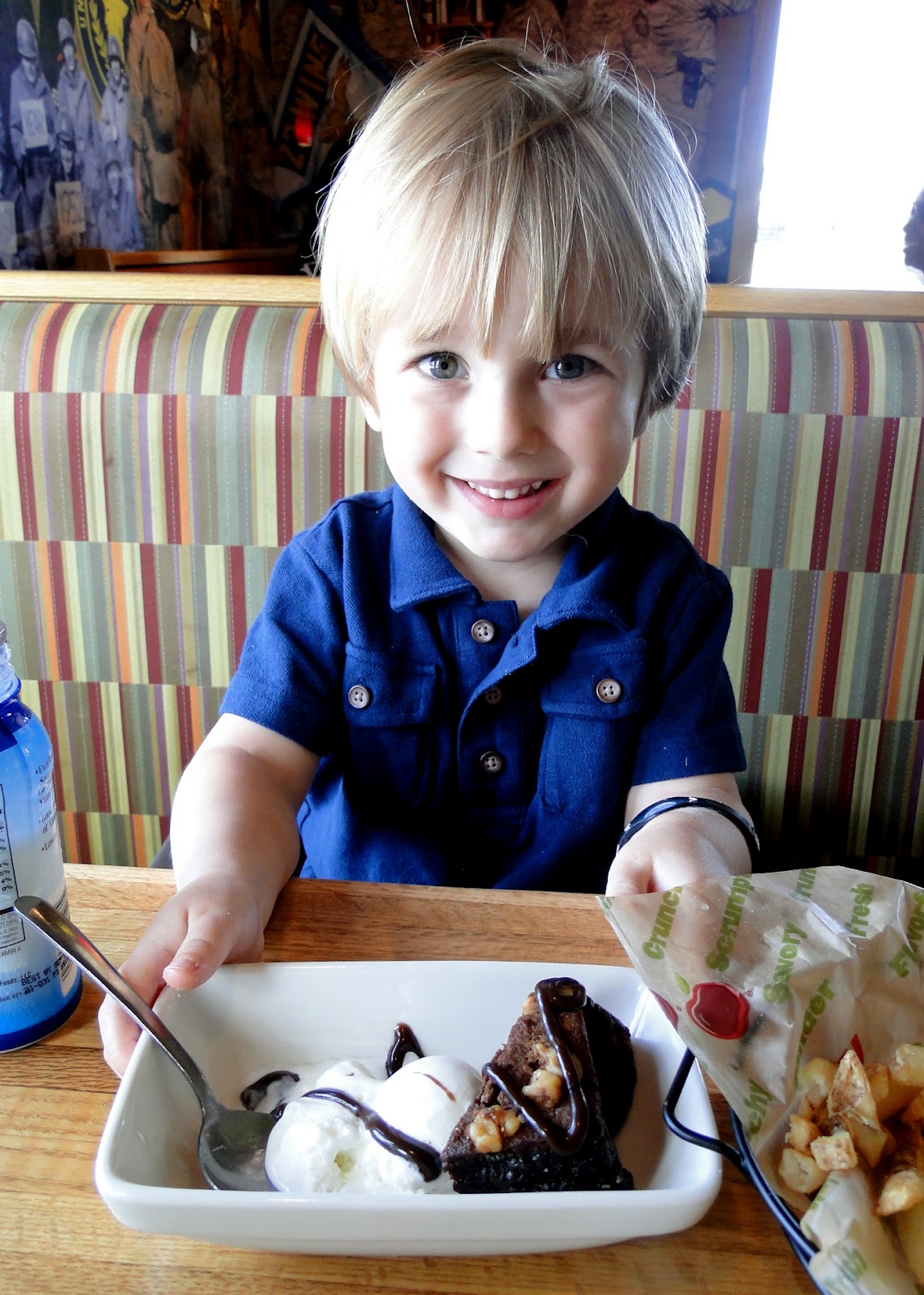 After lunch I took Kye back to Mrs. Charlotte’s. She kept the kids for two nights for me and I scheduled a TON of appointments for myself. I am a BIG believer in staying on top of all health checks. Prevention and early defection are so important right?!?! Within those couple of days I tried to take care of everything I could so I wouldn’t have to drag the kids with me places or have to ask Mrs Charlotte to help me a bunch of different days. I got my hair done, got a massage (I had a gift certificate that was set to expire!), went to the dentist myself, had my yearly exam with my general physician, had two chiropractor appointments, met with a dermatologist, and had TWO date nights with my husband 🙂 I thought not having the kids for two nights would make me feel nice and rested but they were CRAMMED full!!! More on our date nights next 🙂

Kye had a BLAST at the dentist. Who would think they’d be saying that?!?! After our fun lunch date I asked him on the way back to Charlotte’s what his favorite thing was that day (a question we ask each other daily) and he said the dentist! I thought for sure that brownie would have been the favorite thing but I was wrong! He also several nights later said that when he grows up he wants to be a dentist! It’s the first time he’s ever mentioned wanted to be “something” when he grows up so that’s pretty awesome. His visit made quite the impression on him…I def wouldn’t mind him being a dentist. Maybe then we can get some deals on our cleanings 😉