We don’t often get time for Zach and I to spend alone with Kye together. One weekend my mom said she wanted to get to see the kids and decided she wanted to have one kid each night. Of course a date night would have been great but getting to spend alone time with one child was wonderful too! For Kye’s night alone with us we thought up some fun plans to do together. I’d seen on Pinterest where a family decorated big boxes to look like cars then had a “drive-in” movie night! I thought it sounded easy enough and something Kye would LOVE!!! 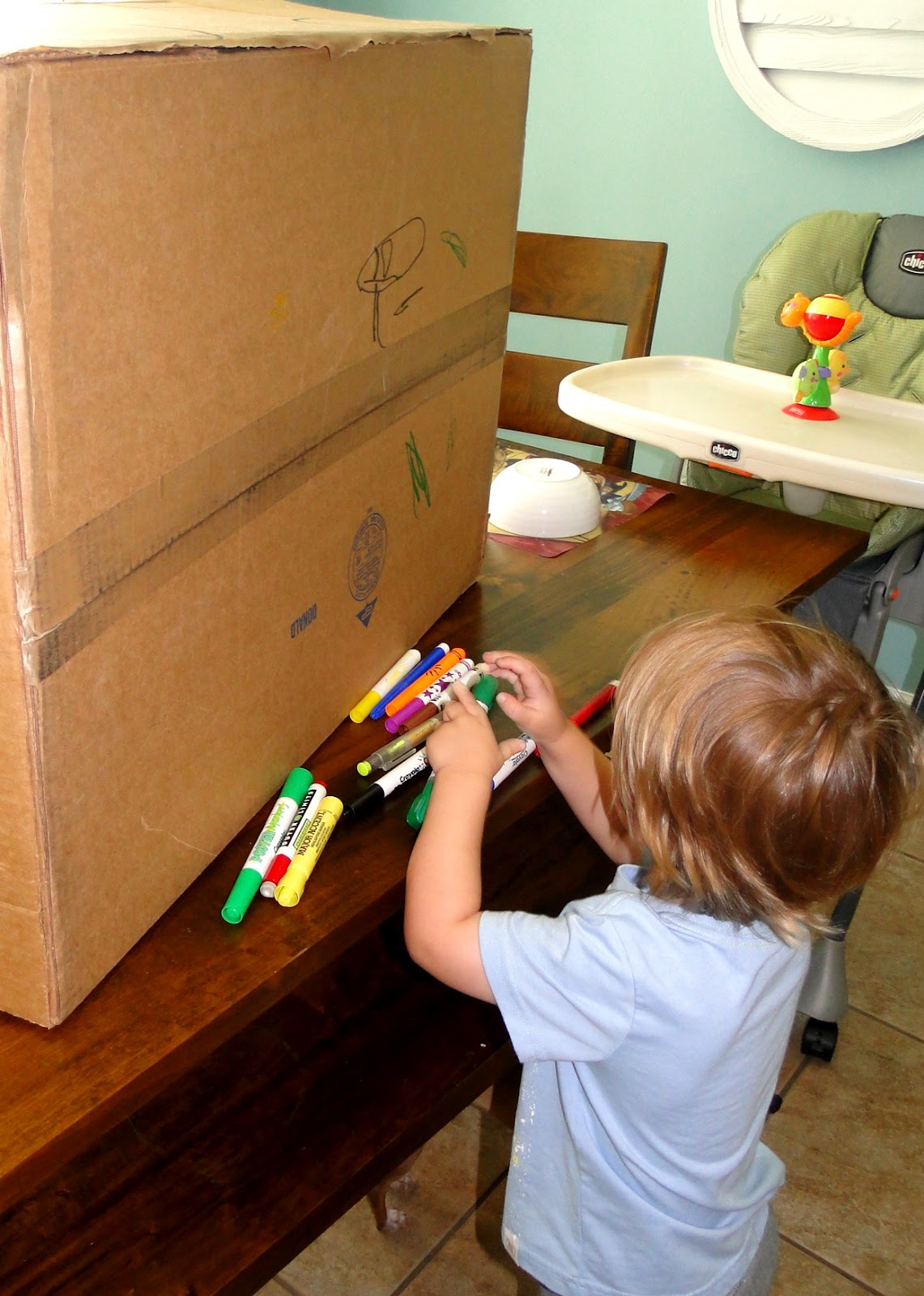 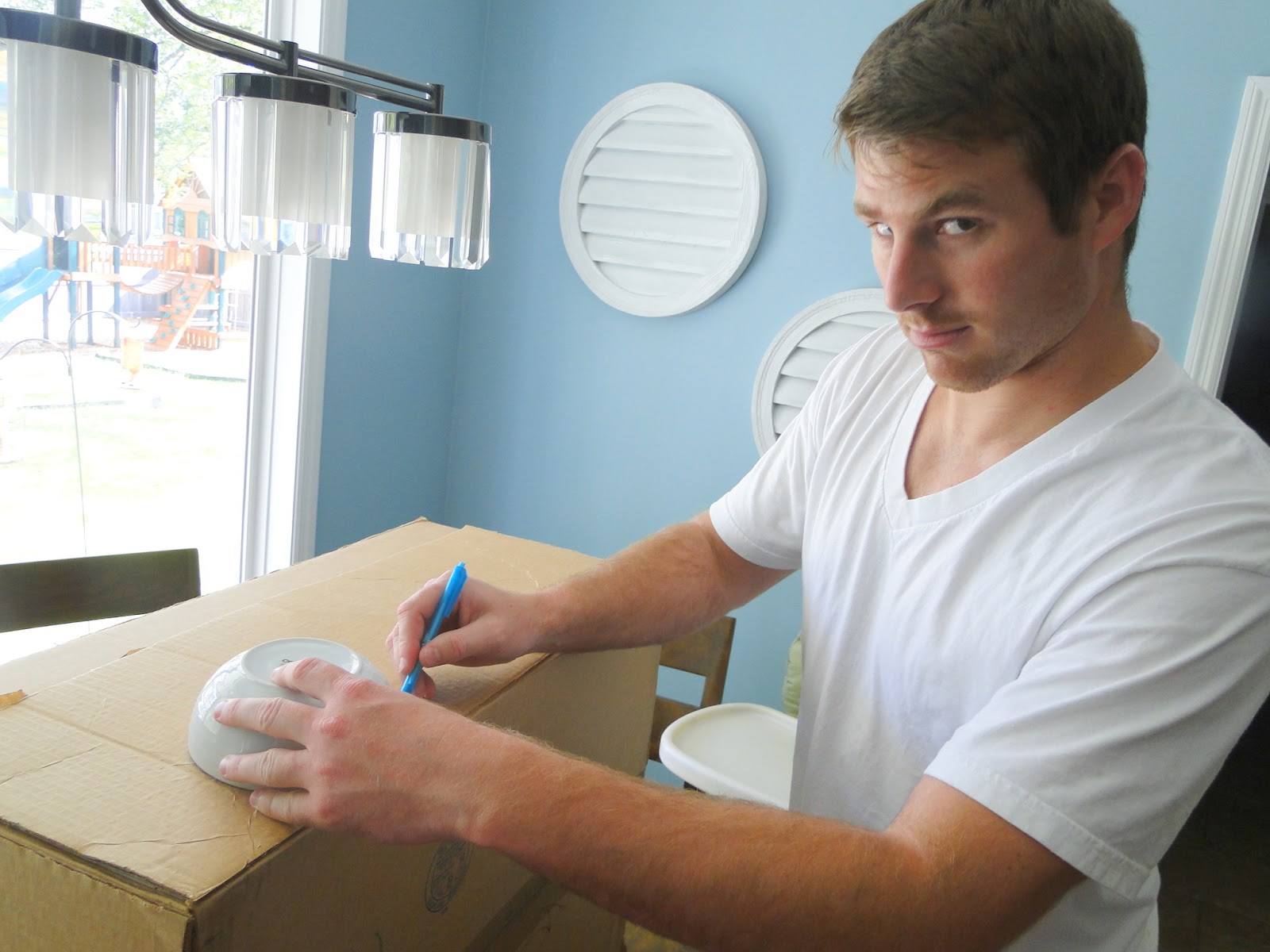 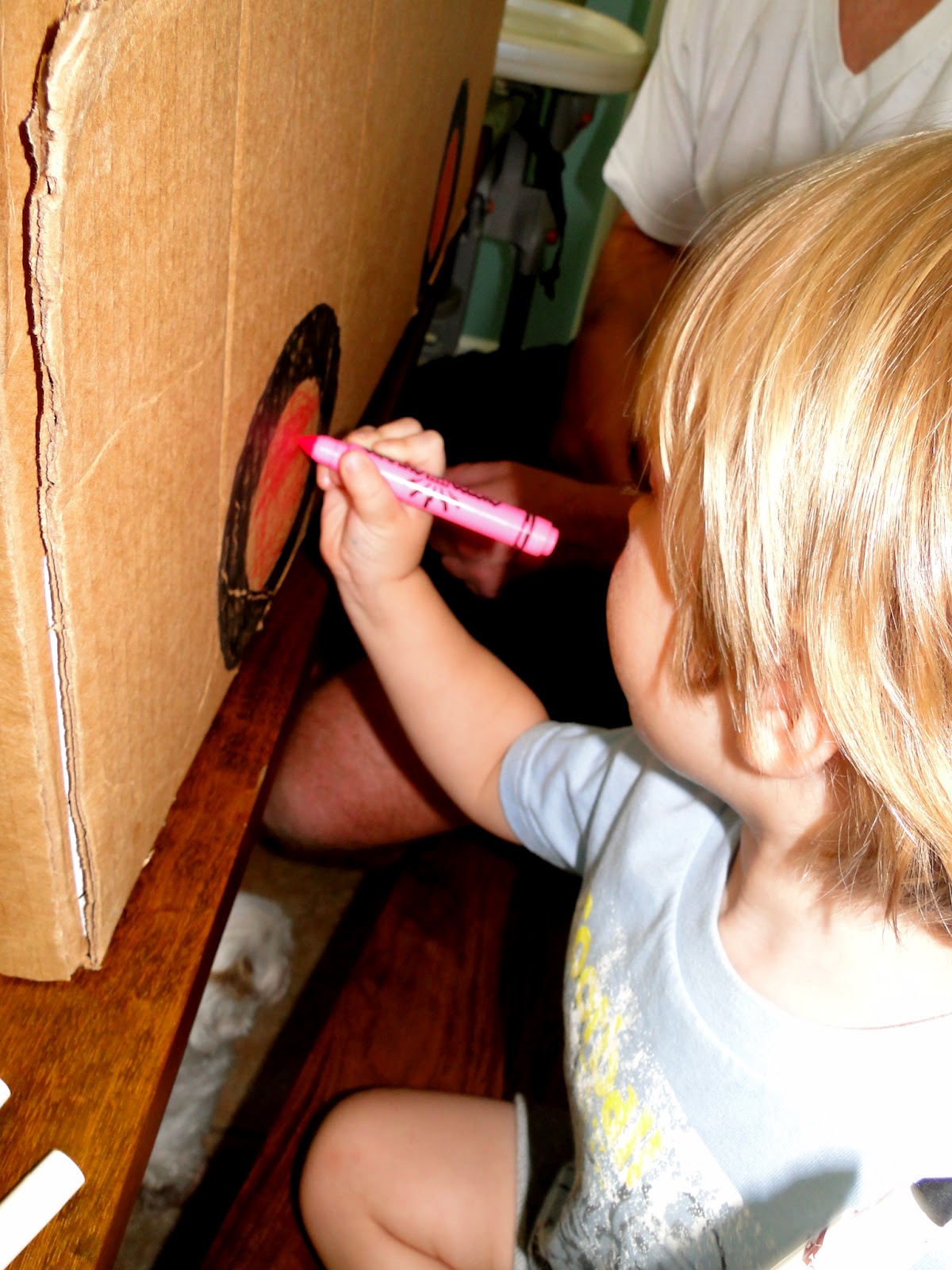 To make it we just cut off the flaps of a large box (we hot glued the flaps onto the box to cover the writing on it!) then Zach drew all the car parts and we all colored it. Of course the ones on Pinterest were all professional looking…but who cares?!? Kye’s three and he was super jacked about having his own car and getting to color all over it! 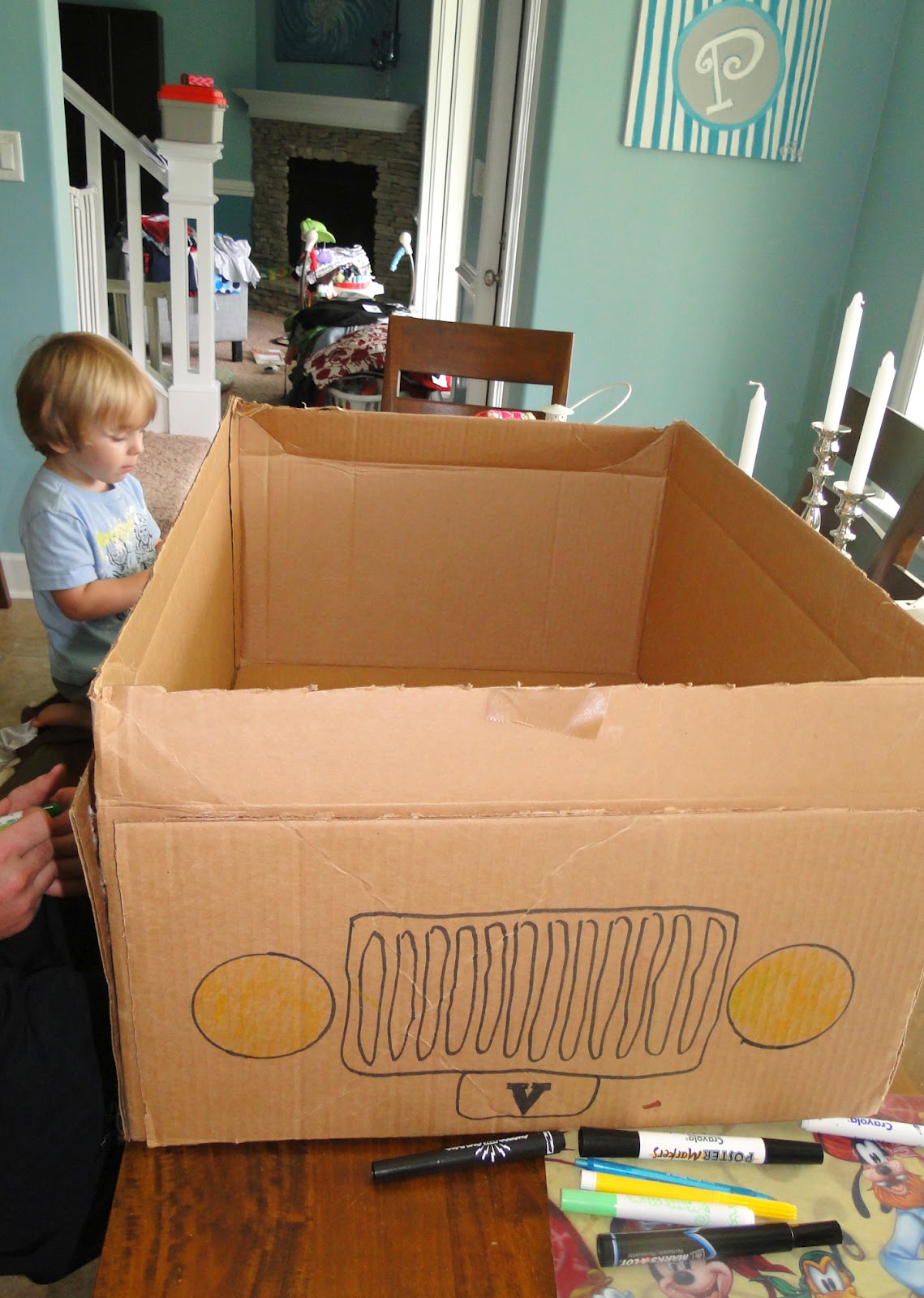 After we decorated the car we went for a swim! Now that we have Brittlynn if we go swimming as a family one of us is either holding her the whole time or not taking our eyes off of her in her little float. So this was a great opportunity to be wild and crazy in the pool together for a change. Kye was BEYOND excited for our swimming fun (PS: he was also BEYOND over due for a hair cut…yikes!) 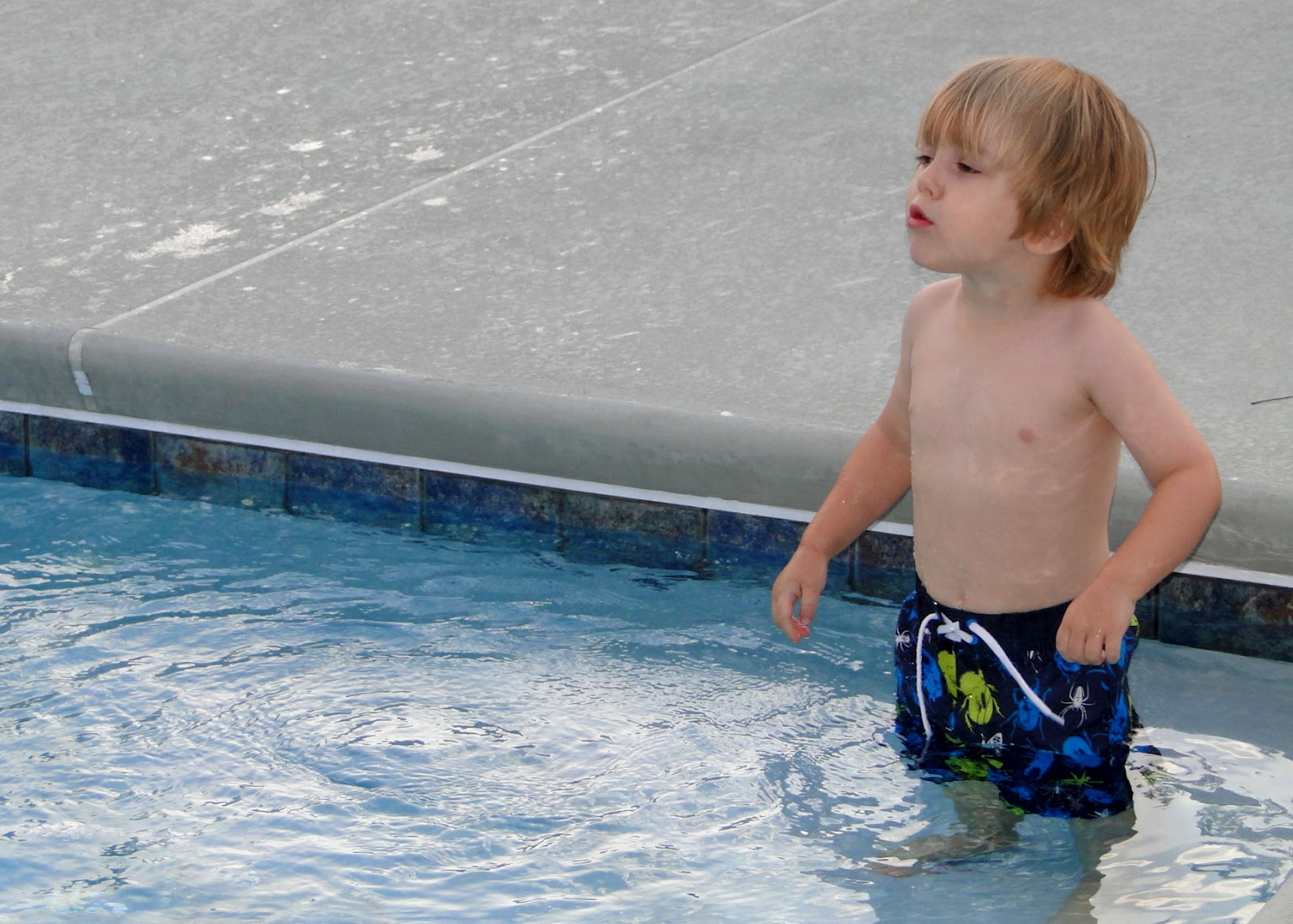 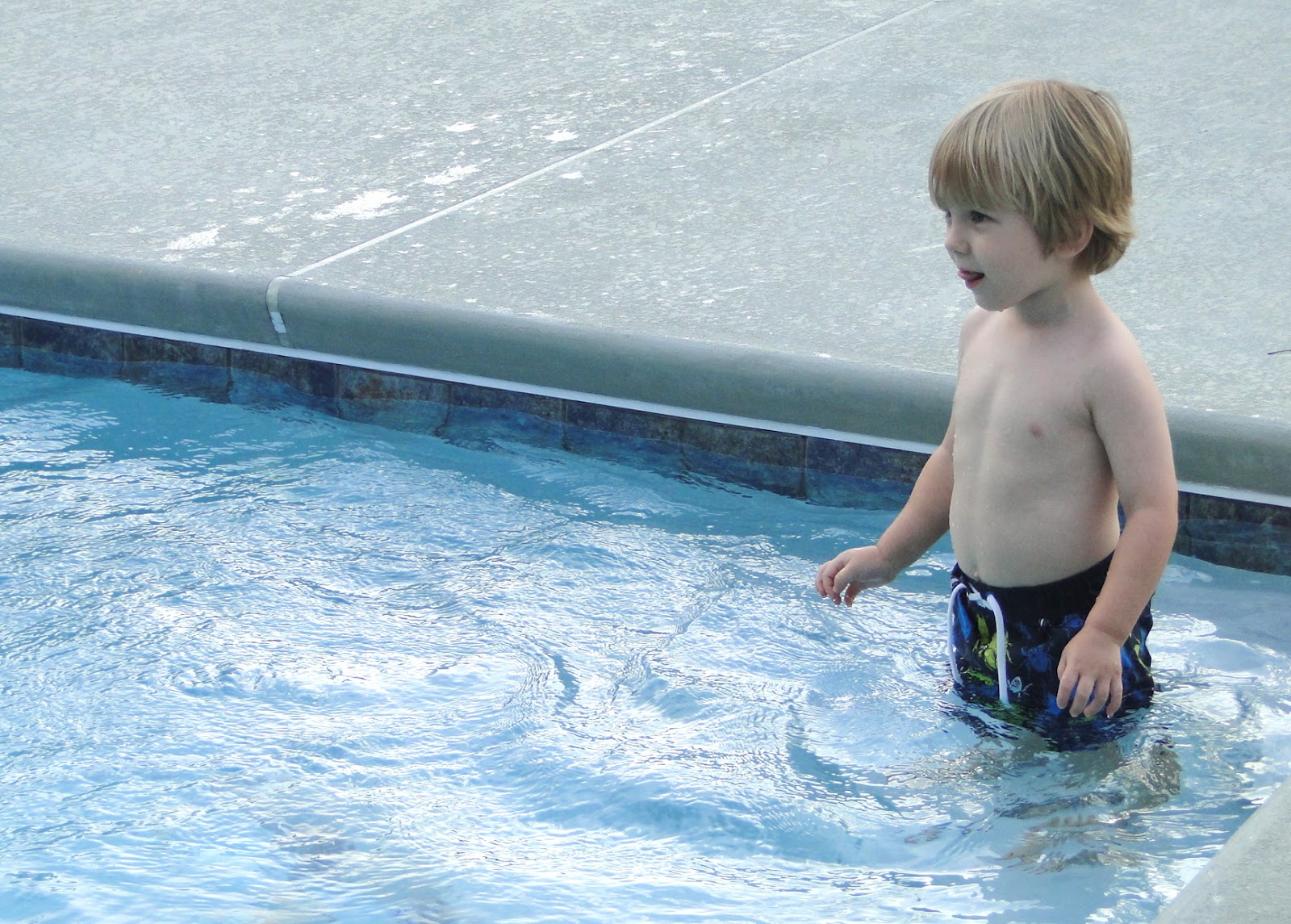 I took this video of Kye and Zach playing their new favorite pool game together. Kye repeats a line from a book we often read (Crocodaddy) then jumps on Zach’s back as he swims by! I’m telling you…my child has NO FEAR when it comes to the water! Such a blessing and I’ll be forever thankful we did survival swim with Tiny Bubbles! 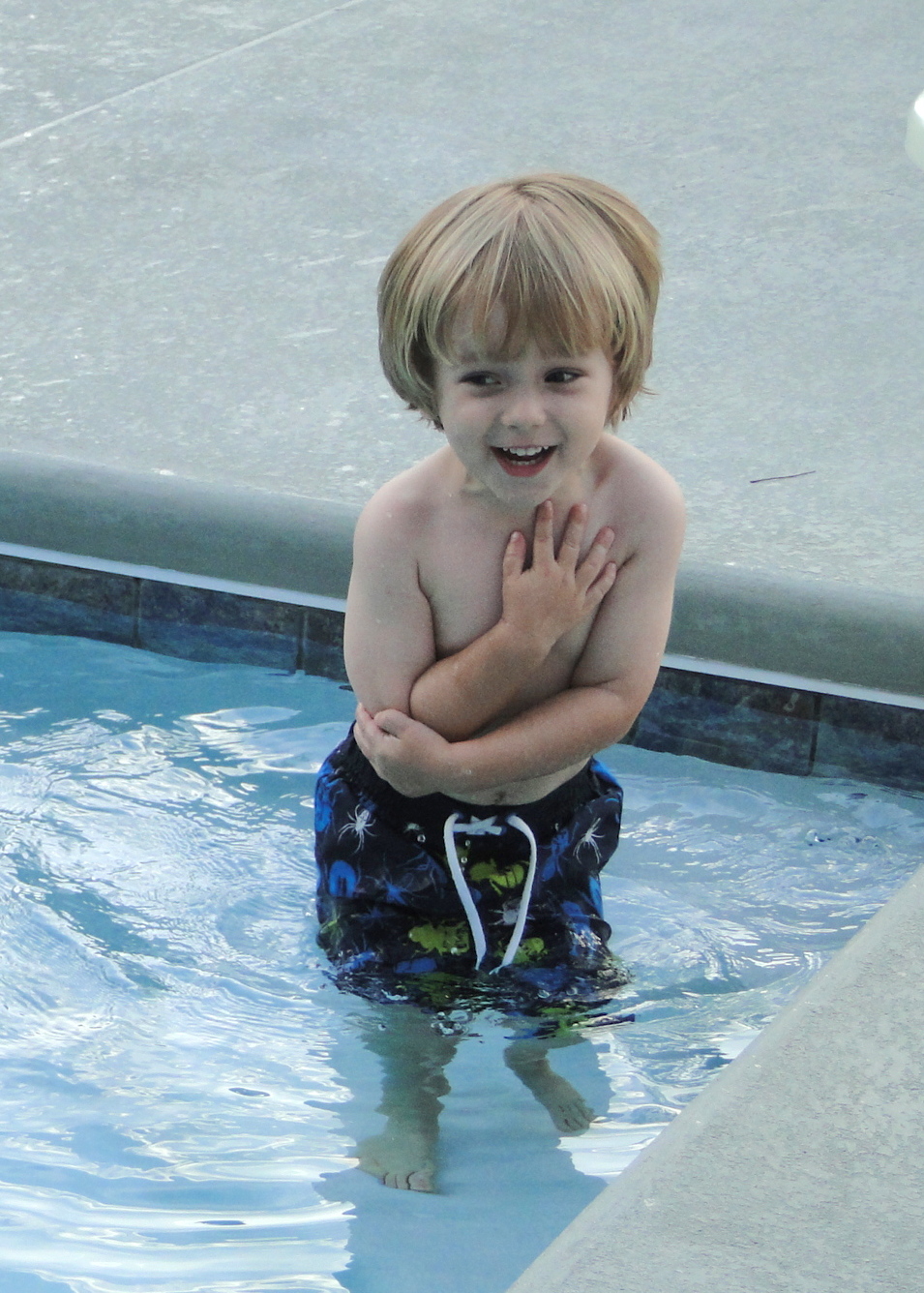 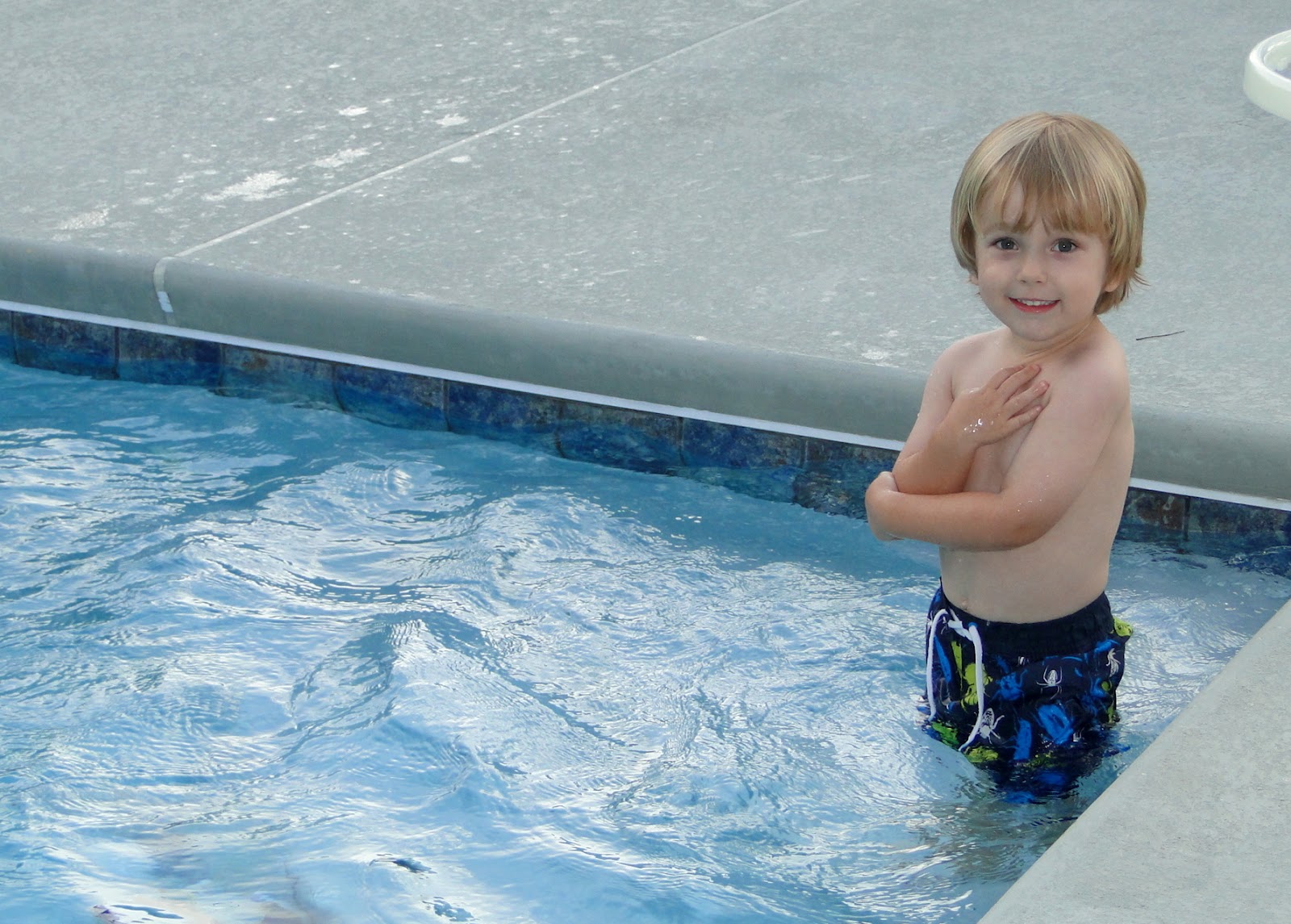 Here’s a video of Zach and Kye jumping in together! He and I also jumped in together 😉

In the video you can also see how he does great touching the bottom of the pool now! 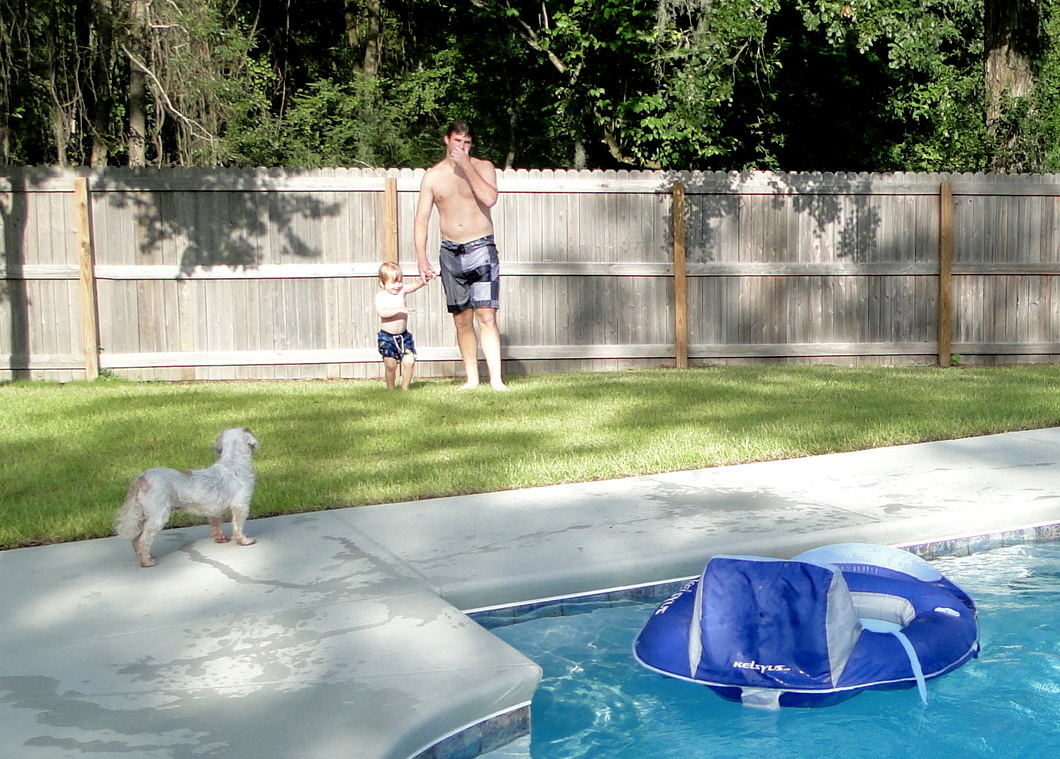 We enjoyed a nice long swim session. We did a lot of jumpin-in and a TON of basketball playing. Yes, I played basketball. It was Kye and I versus Zach most of the time 😉 It was SO much fun just being silly and enjoying myself. So much of the time I’m focused on being the mom. Getting things done. Watching the clock. Etc. That I don’t get to just let loose and PLAY. We focused on just having FUN and it was great!!! 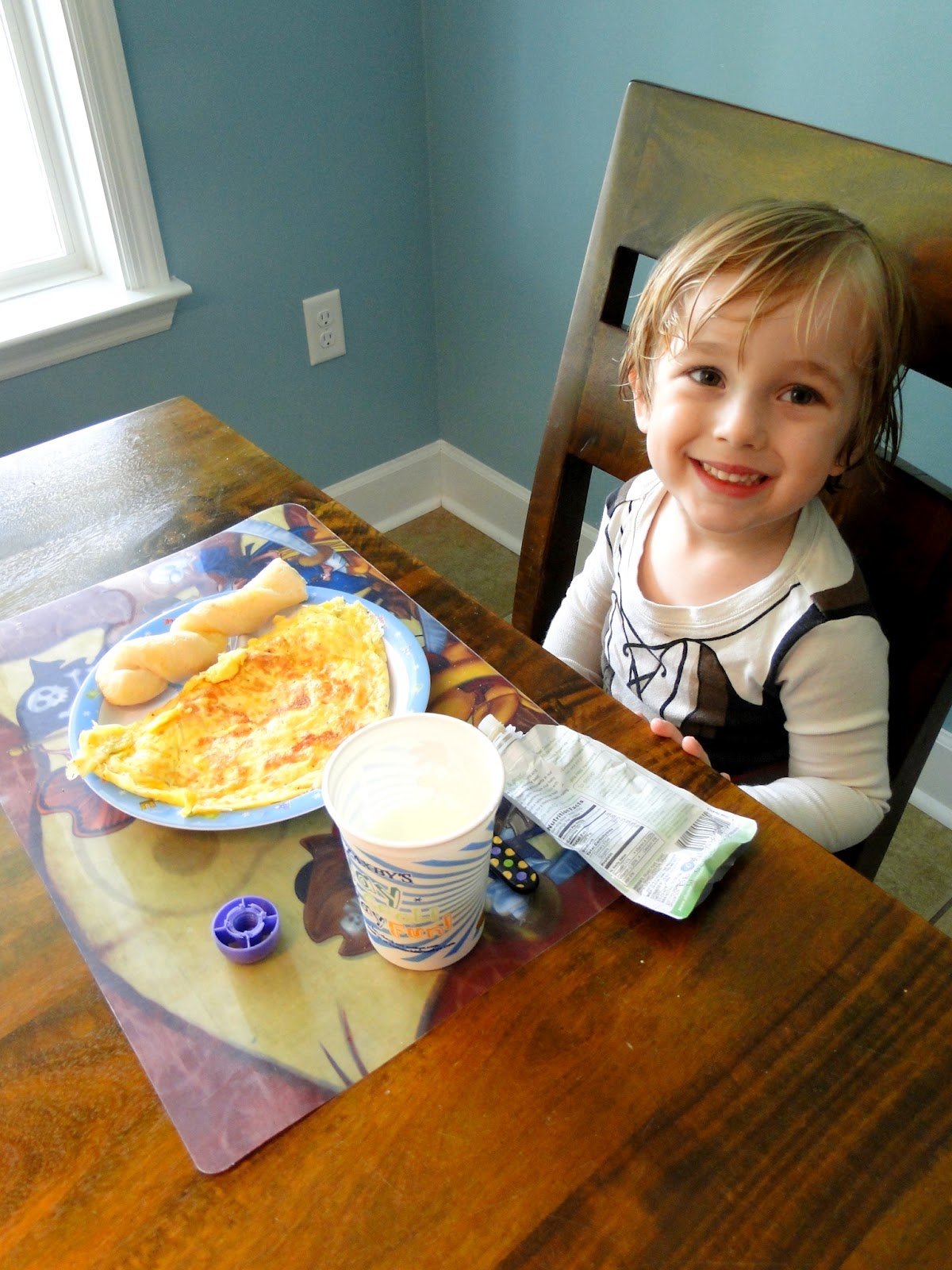 Time for the movie!!! We filled Kye’s car up with pillows and, of course, he had his friends. He REALLY loved getting his own special spot for movie time! We didn’t watch too much of one because it was close to bedtime but we enjoyed just relaxing together after such a fun couple of hours! 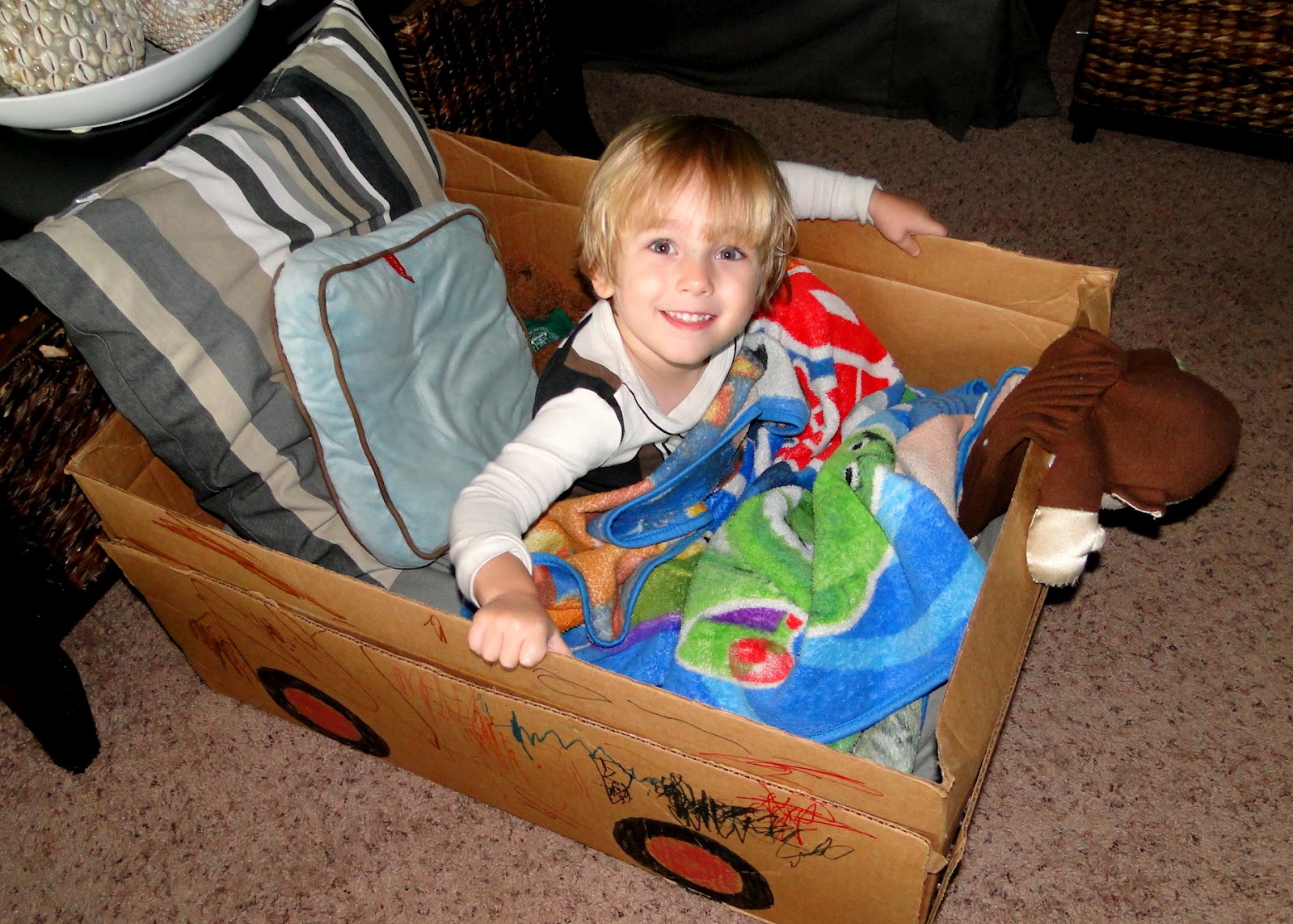 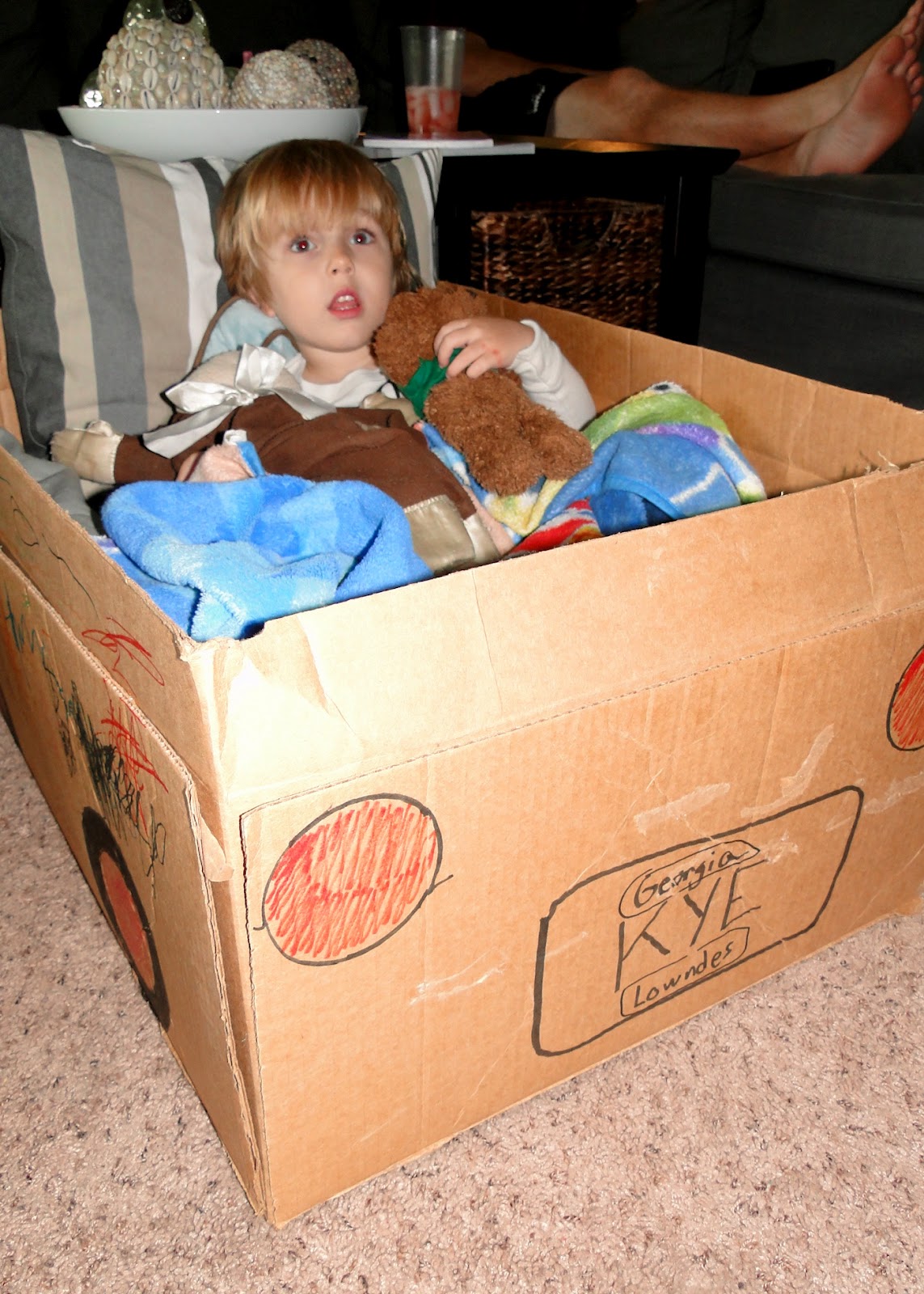 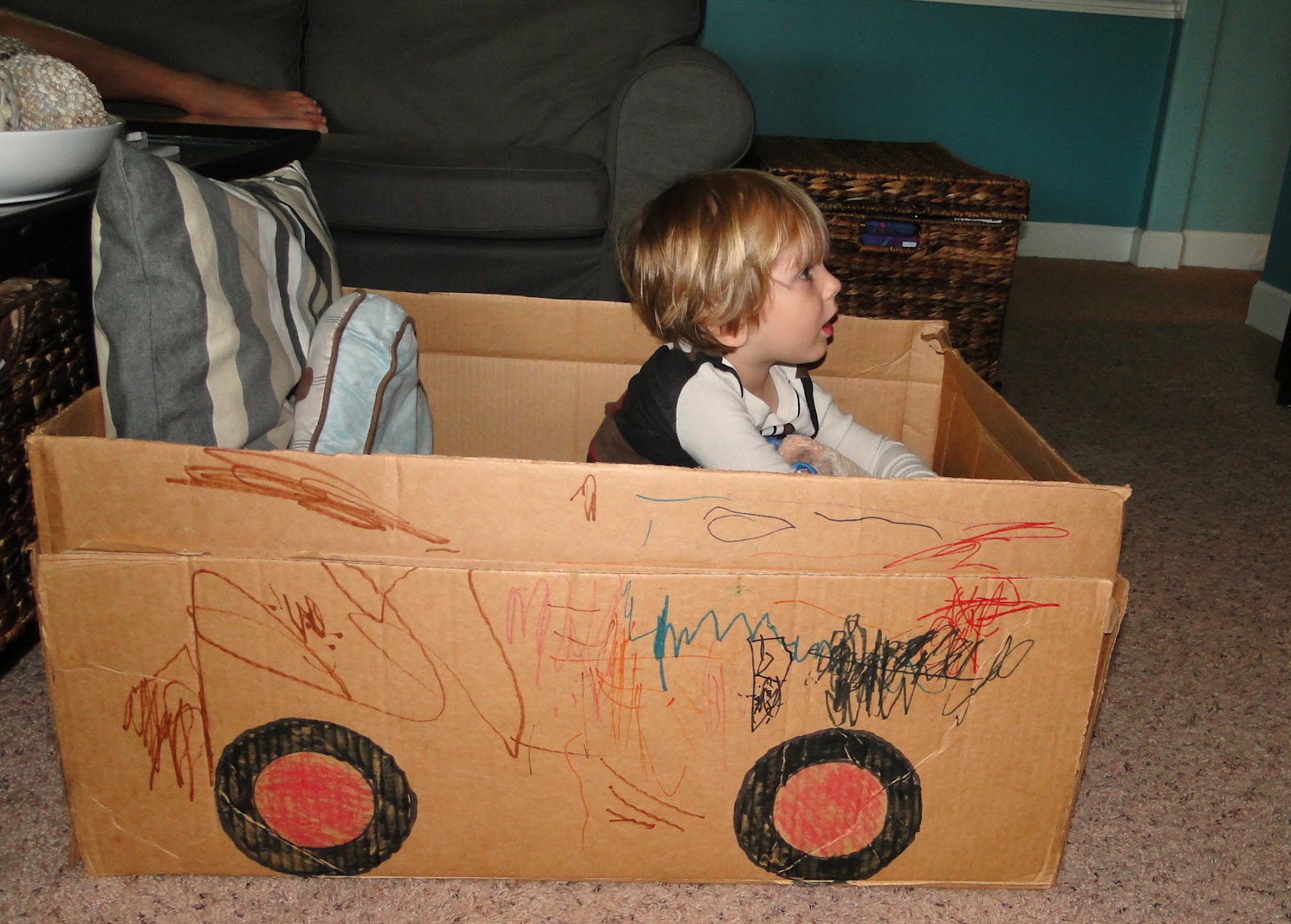 The next morning we made muffins (and I didn’t eat any! Go me!) and sat outside to eat together. Kye LOVES eating outside and we just can’t do it as often now with Britt so it was a great thing to do since she wasn’t there! 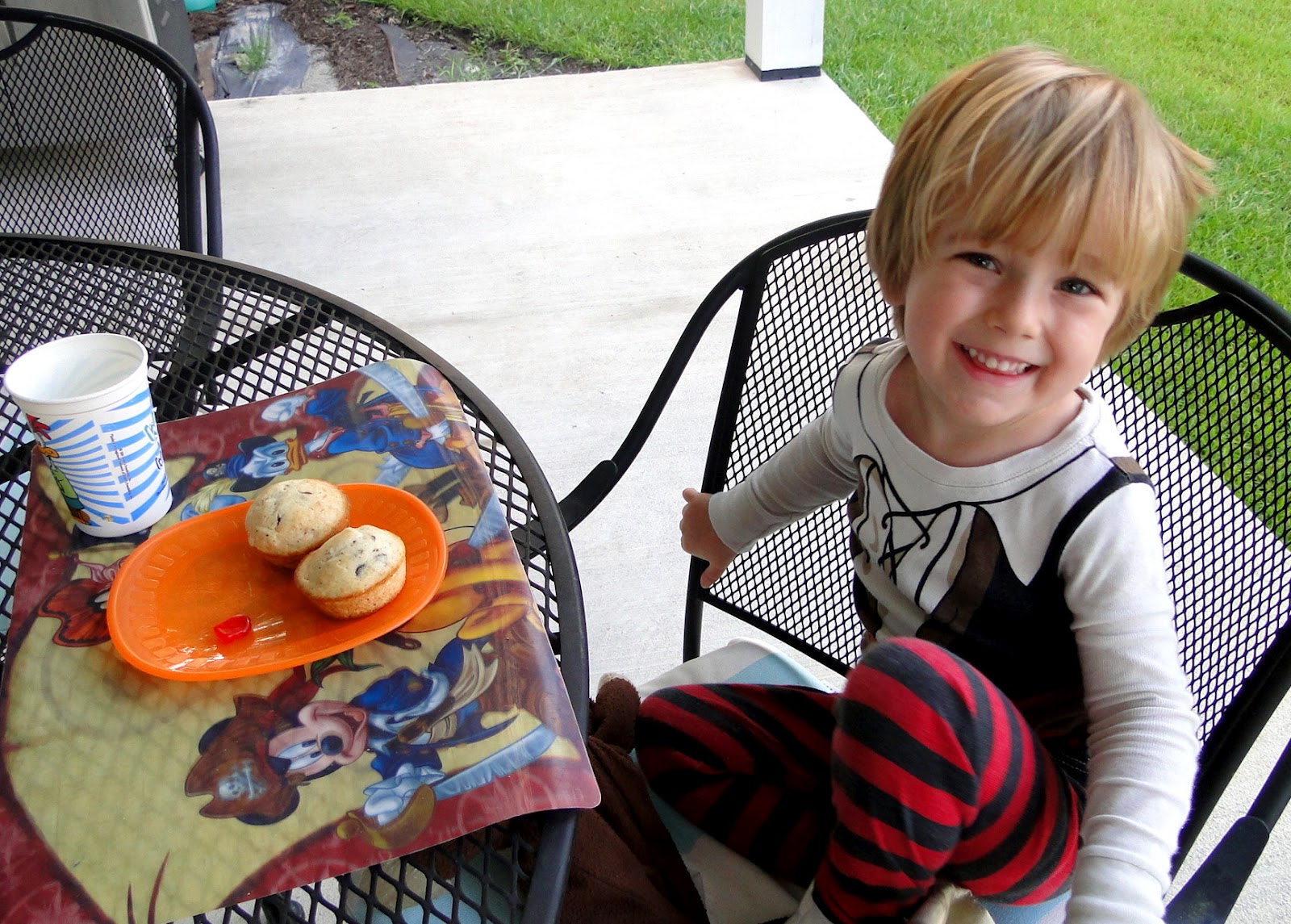 The three of us also busted open Hi-Ho Cheery-O for the first time. Can you believe the company didn’t include the spinner for the game??? It’s the SECOND game I’ve opened with a missing piece. Pretty slack!!! I need to call them and have them send a replacement! The game was SO FUN. I balled out! But it’s a game of luck so there isn’t much skill involved 😉 We played a few rounds before Brittlynn came home to go down for her first nap of the day! 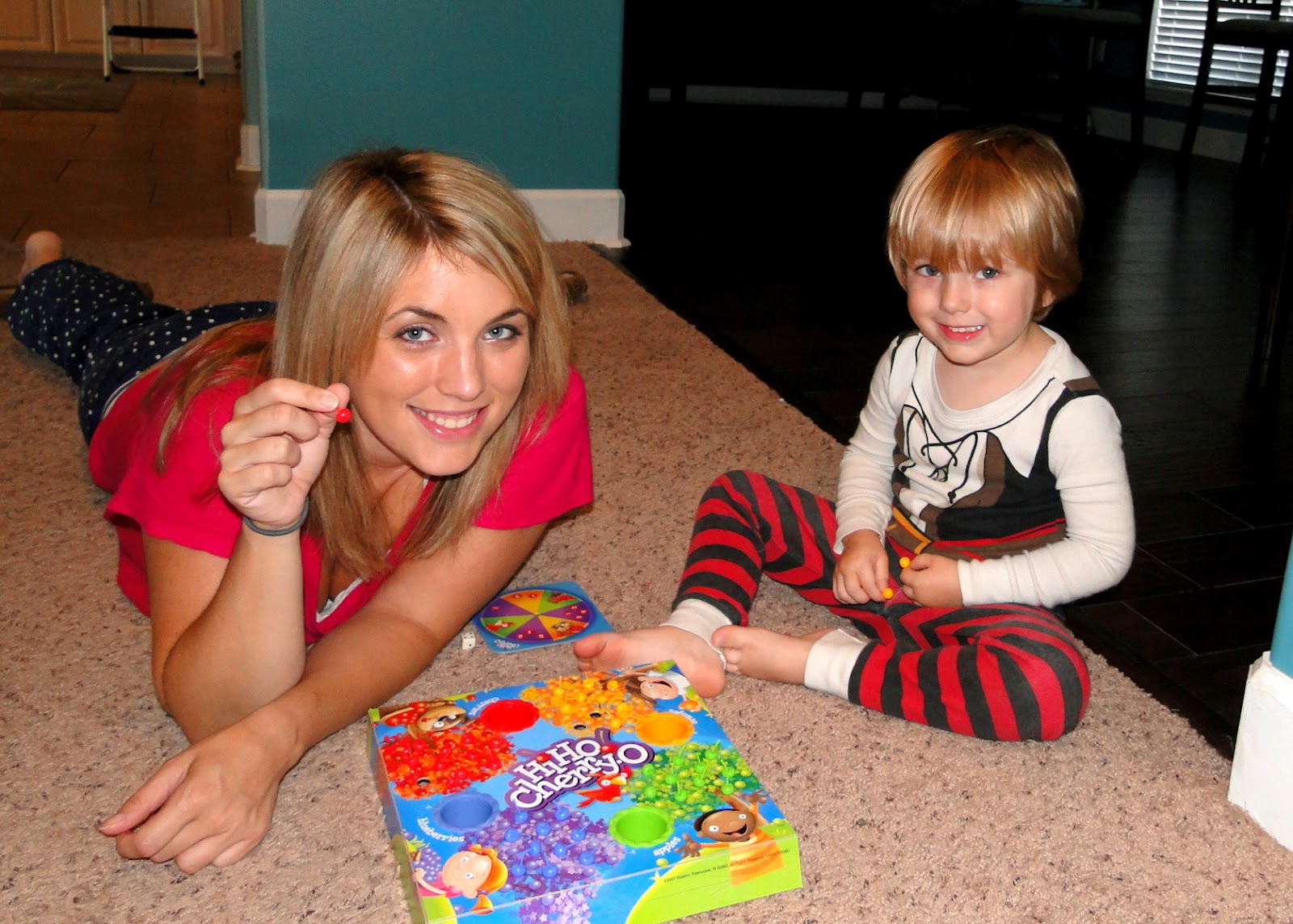 I had gotten an AWESOME deal from one of the kid’s sales on a helmet for Kye. It’s a FSU one and was only $1!!! Zach was probably more excited than Kye was and he dug out his old helmet from college football so they could play together. Isn’t this adorable??? 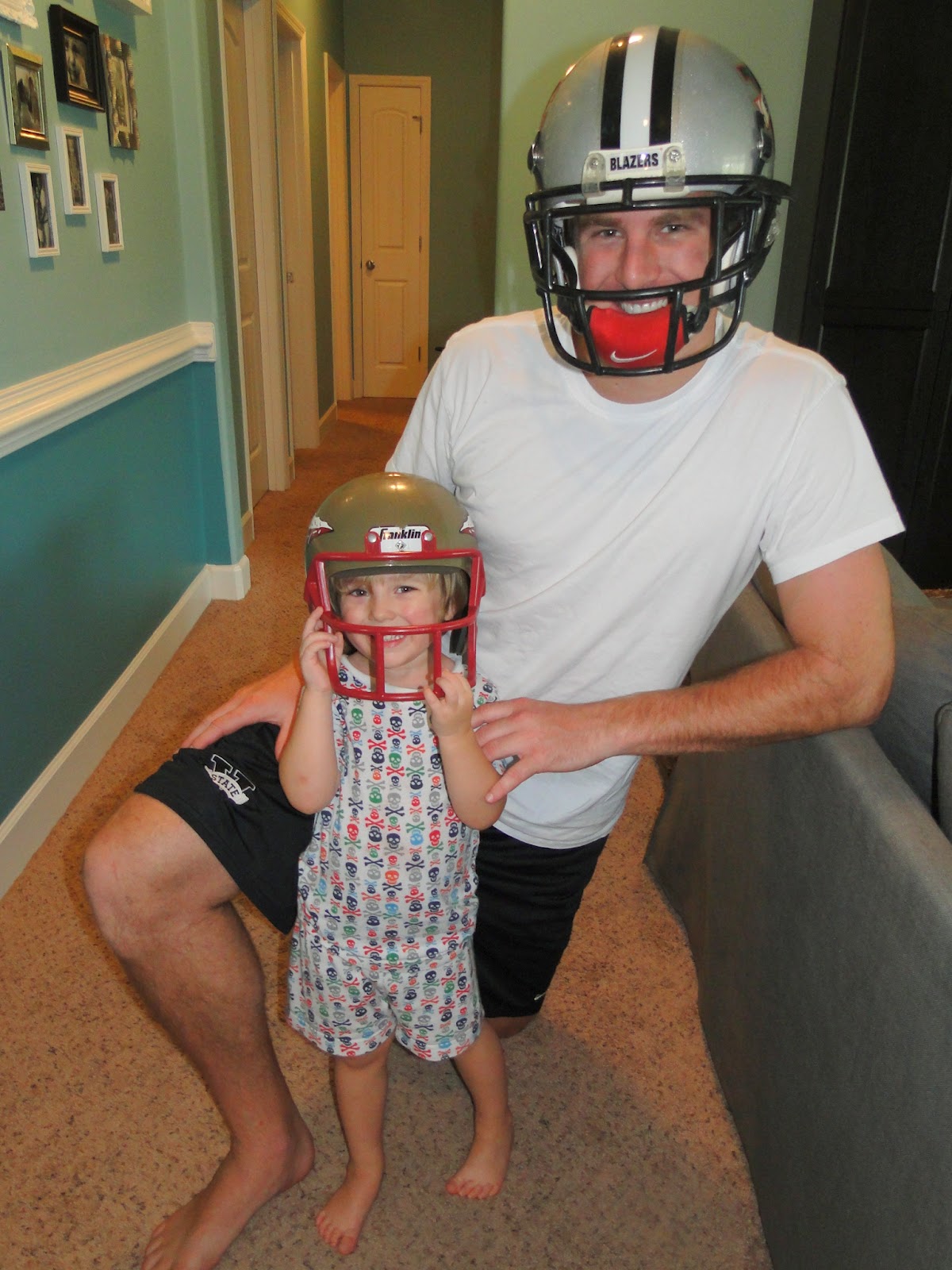 I didn’t take any pictures of Britt’s solo night…I mean with her there still isn’t a whole lot you can do ya know??? We read stories together and just cuddled up on her a lot. Soaked in some sweet baby lovin’ right? 🙂 It was a fun weekend enjoying each of our babies individually!