Here is the summary from February for Kye! His last month being THREE! For some reason I didn’t take NEARLY as many pictures as usual that month? I guess we just didn’t do much? Don’t worry b/c March will totally be making up for it 😉

Daddy’s Helper: As usual Kye’s favorite activity is helping Daddy work 🙂 They spent a LOT of time outside (in the cold!) working on projects this month. Zach actually made a new dining room table for our back porch (post to come!) and Kye got to help. How special is that? What’s even MORE special is the wood they used came from Big Daddy’s farm. And was actually used as fencing around his yard many years ago…Zach’s dad actually helped put the fence up. So much history! 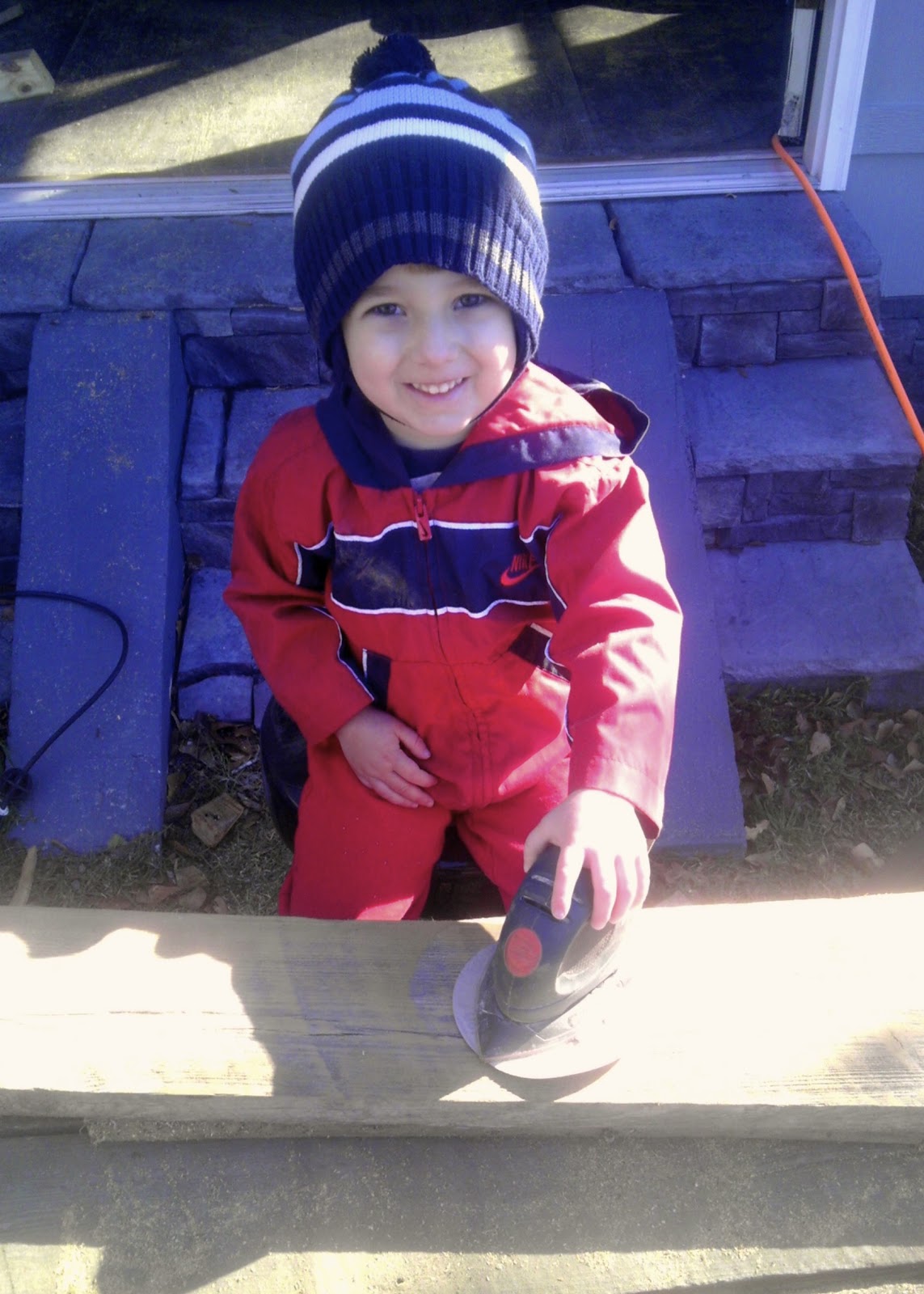 Scissors: I had some child scissors up in the cabinet and was cleaning it out and found them so I let Kye try them out. Is it a totally bad parent thing that I have NO clue if they are using scissors at school or not?!?! I figured I’d just let him cut up some paper and he did great with it. It took him a minute or two to get into the groove of how to hold them then he was good to go. He said he was cutting up wrapping paper for us (makes logical sense b/c the only time he sees me cut stuff is when I’m wrapping gifts for people). It kept him happily entertained for a LONG time! Here’s a video! 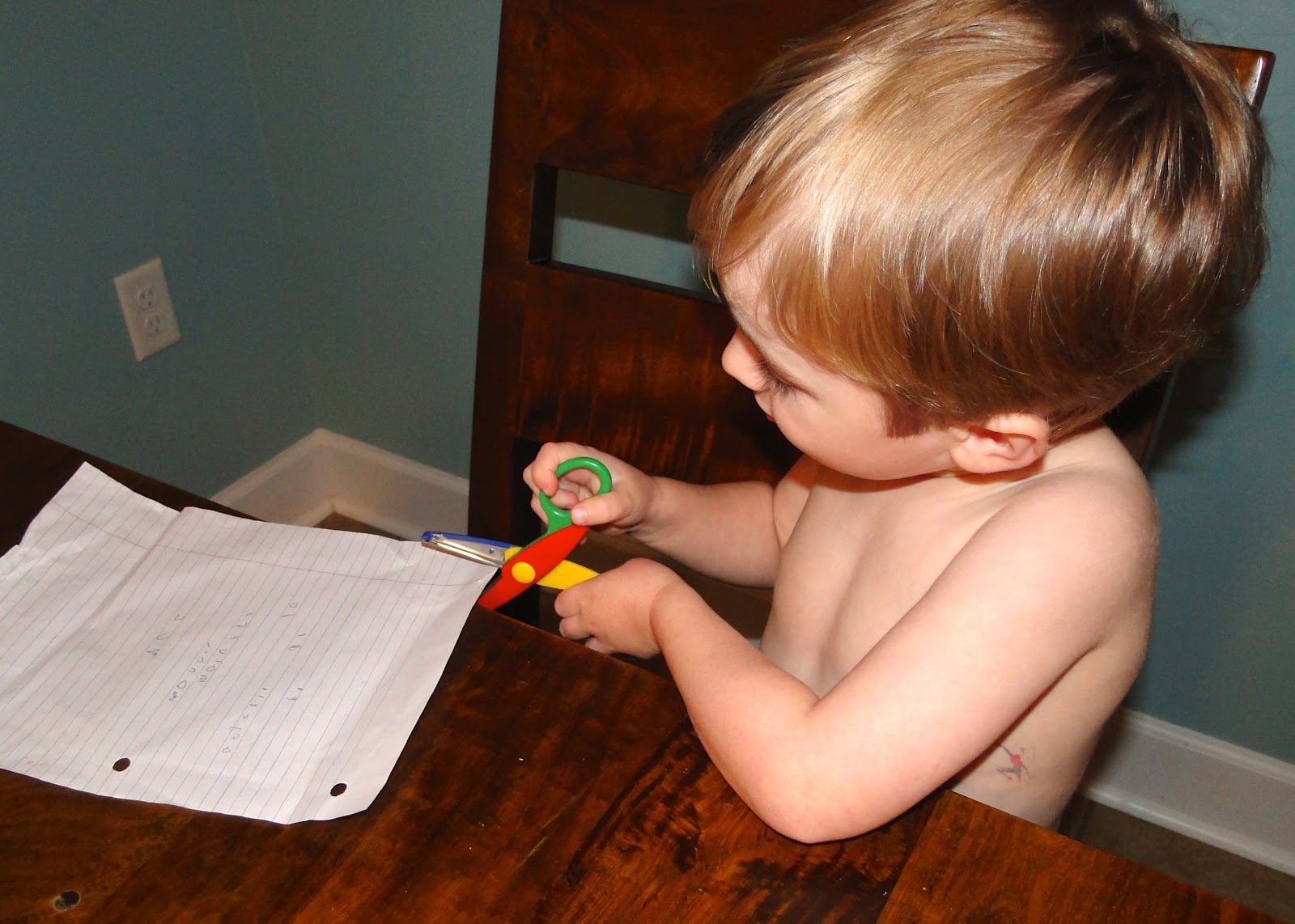 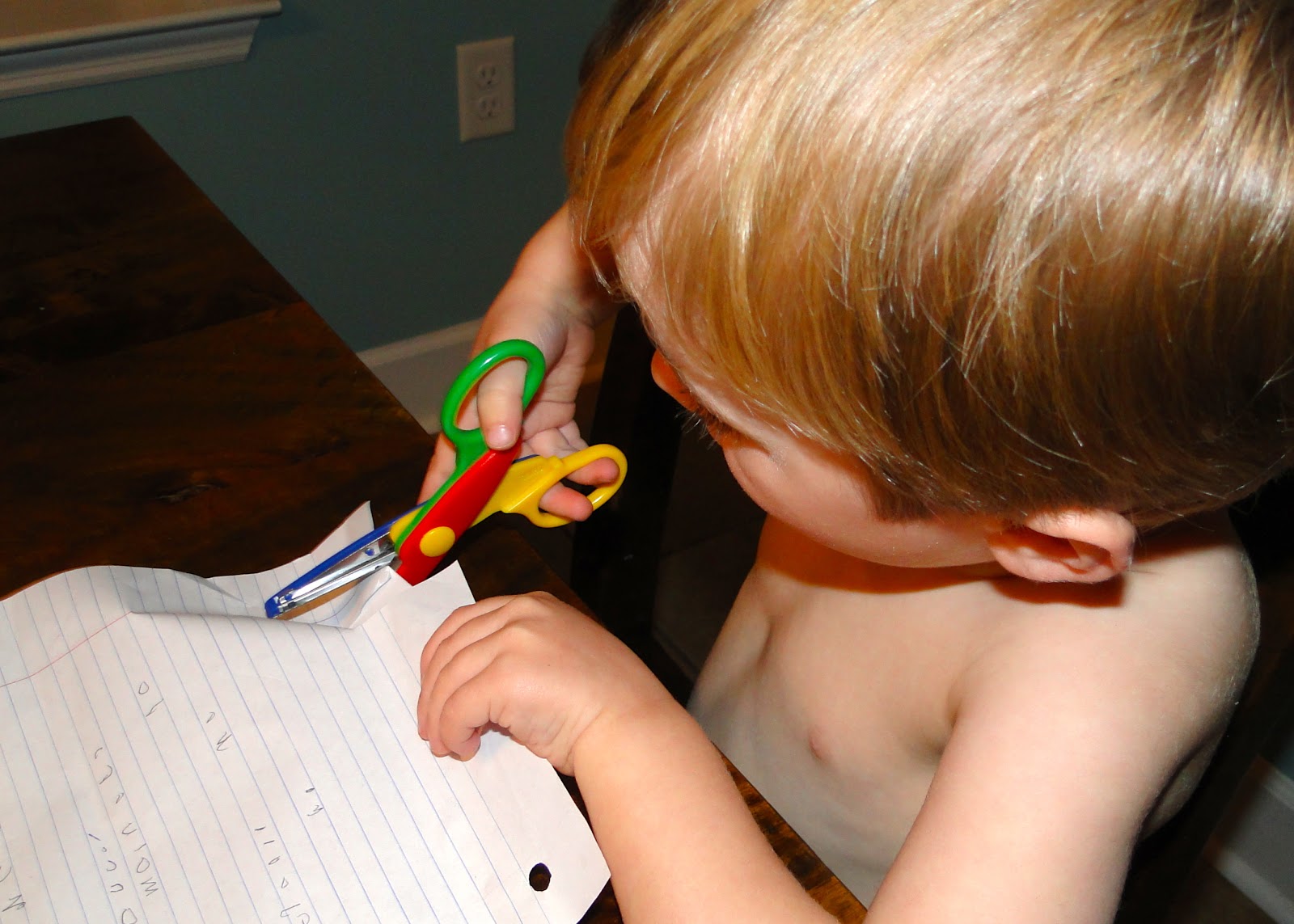 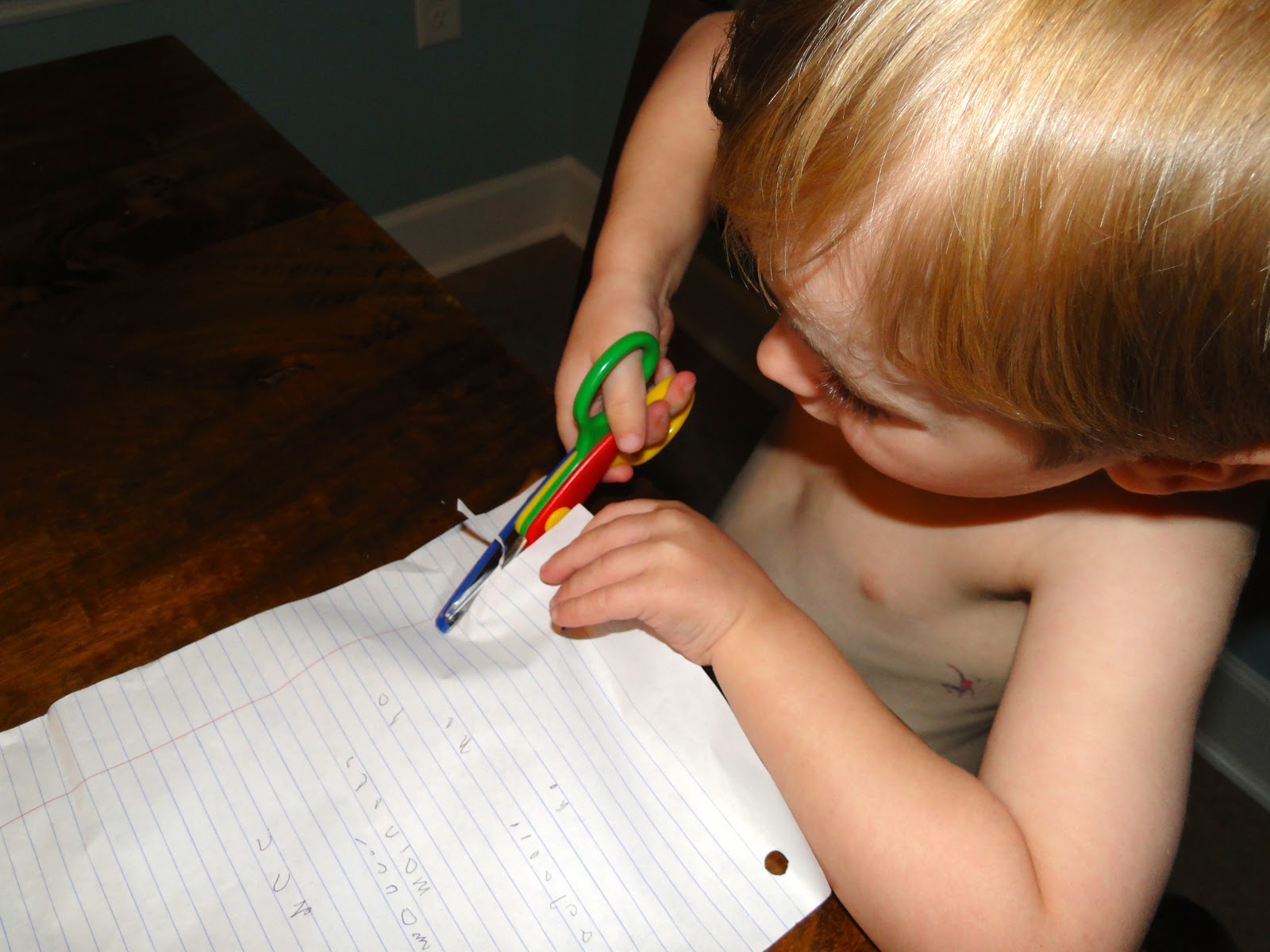 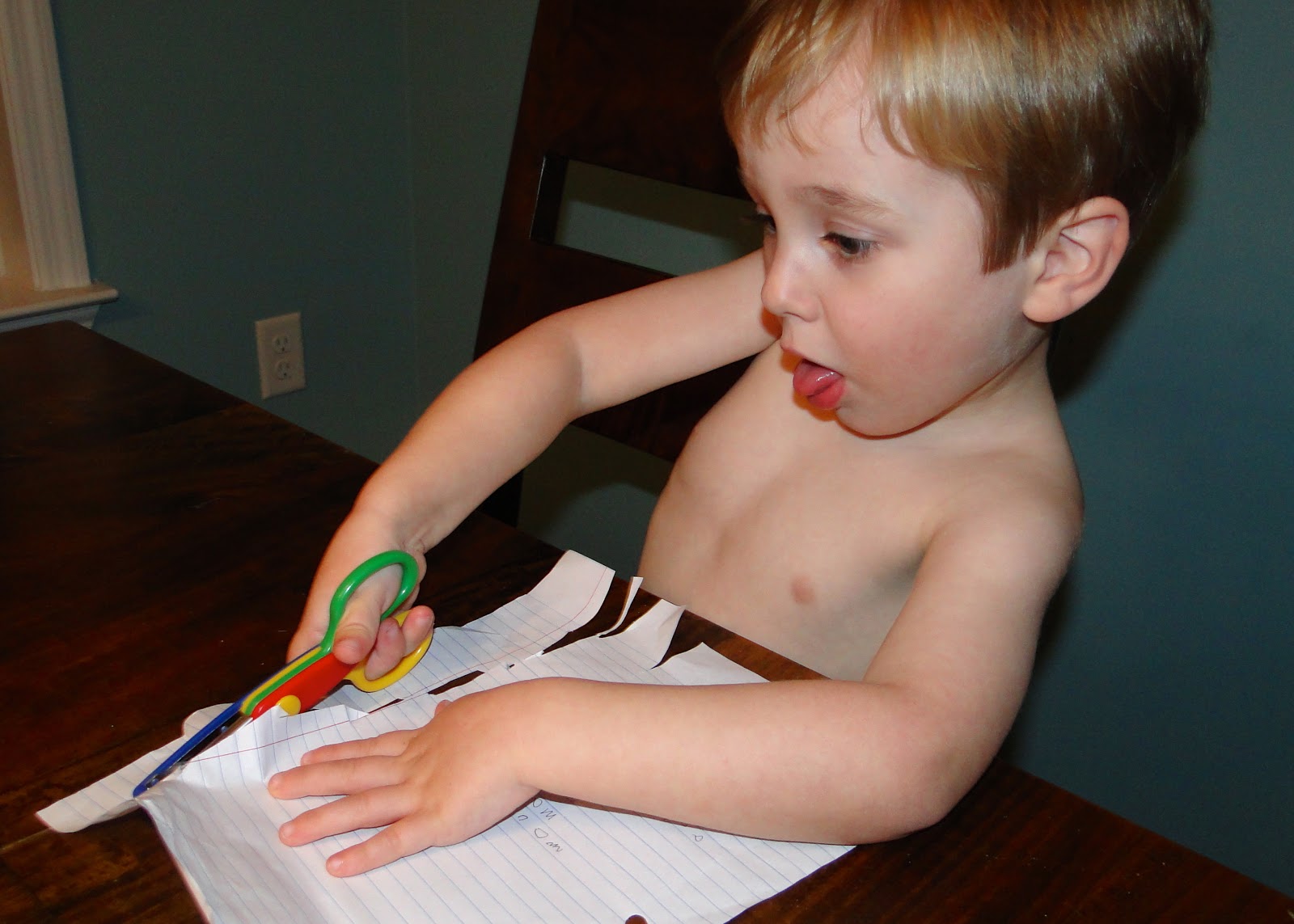 Silverware: I have mentioned this before but finally took a picture of it 😉 I think having “jobs” around the house is SO important for our children. We are a family. We ALL play a role in the success of our home. Kye has many little “jobs” and we add to the list as we see fit. He always clears his stuff from the table but now I am having him get his and Britt’s silverware before each meal. I moved all of their stuff into a box and put the box in a lower cabinet in the kitchen. Kye can open and shut it with ease and can pick out the silverware without any problems then shut the door again 🙂 It has also made it easy for BOTH kids to help put the dishes away when the are clean. They both (yes, even Britt who is 16 months old!) know where the forks and spoons go and can put them away.  Kye takes SO much pride in his “jobs” and I love having the extra help! 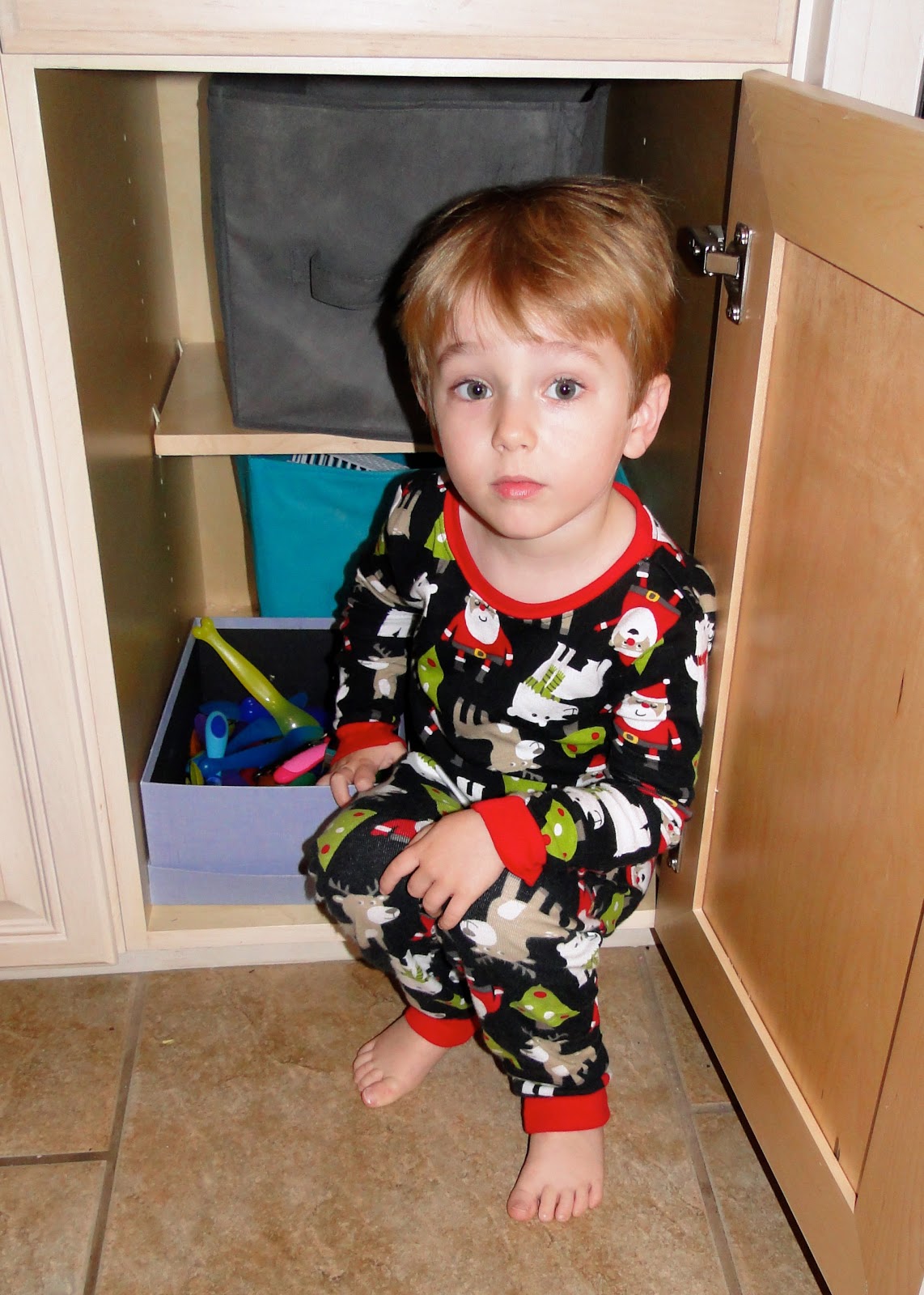 Running: A foot update on me is on its way soon…but after the second cortisone shot I was feeling pretty good! Zach went on a golf trip with his dad for several days and I didn’t want to keep the kids cooped up the entire time. So we went on a walk to the playground. A HUGE deal for me. I’ve had foot issues for 6 MONTHS now and have been very limited in my walking abilities. It was nice to get out, get some fresh air, and just enjoy my sweet babies. On the way back Kye said he wanted to RUN. He got out of the stroller and ended up running the ENTIRE way home. Pretty impressive! It is such a blessing to have such a well behaved child who obeys me so well. I can trust him completely! I let him run ahead of us and would yell ahead to him what his next “stop and wait” point would be. He stopped every time without question or hesitation 🙂 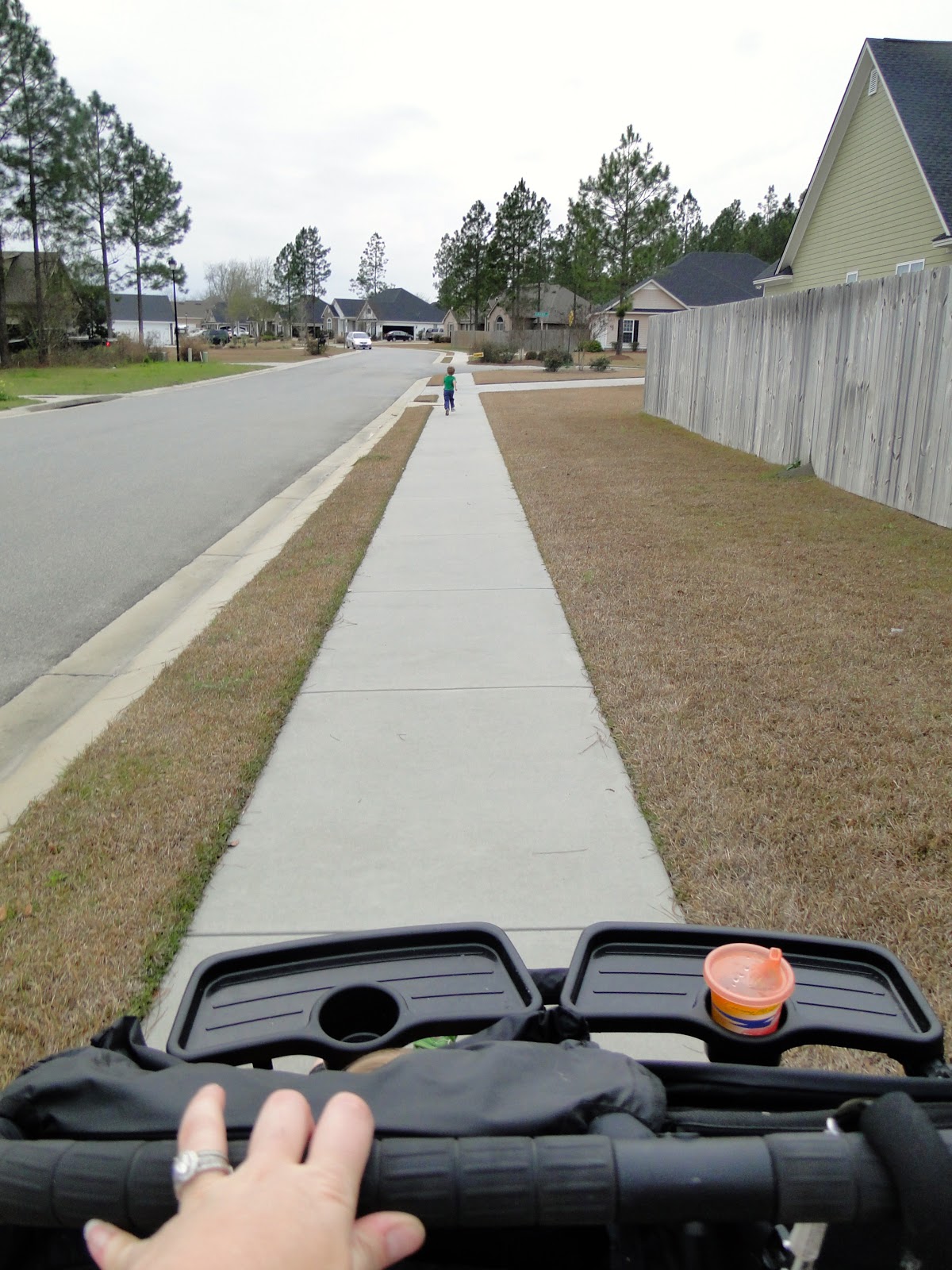 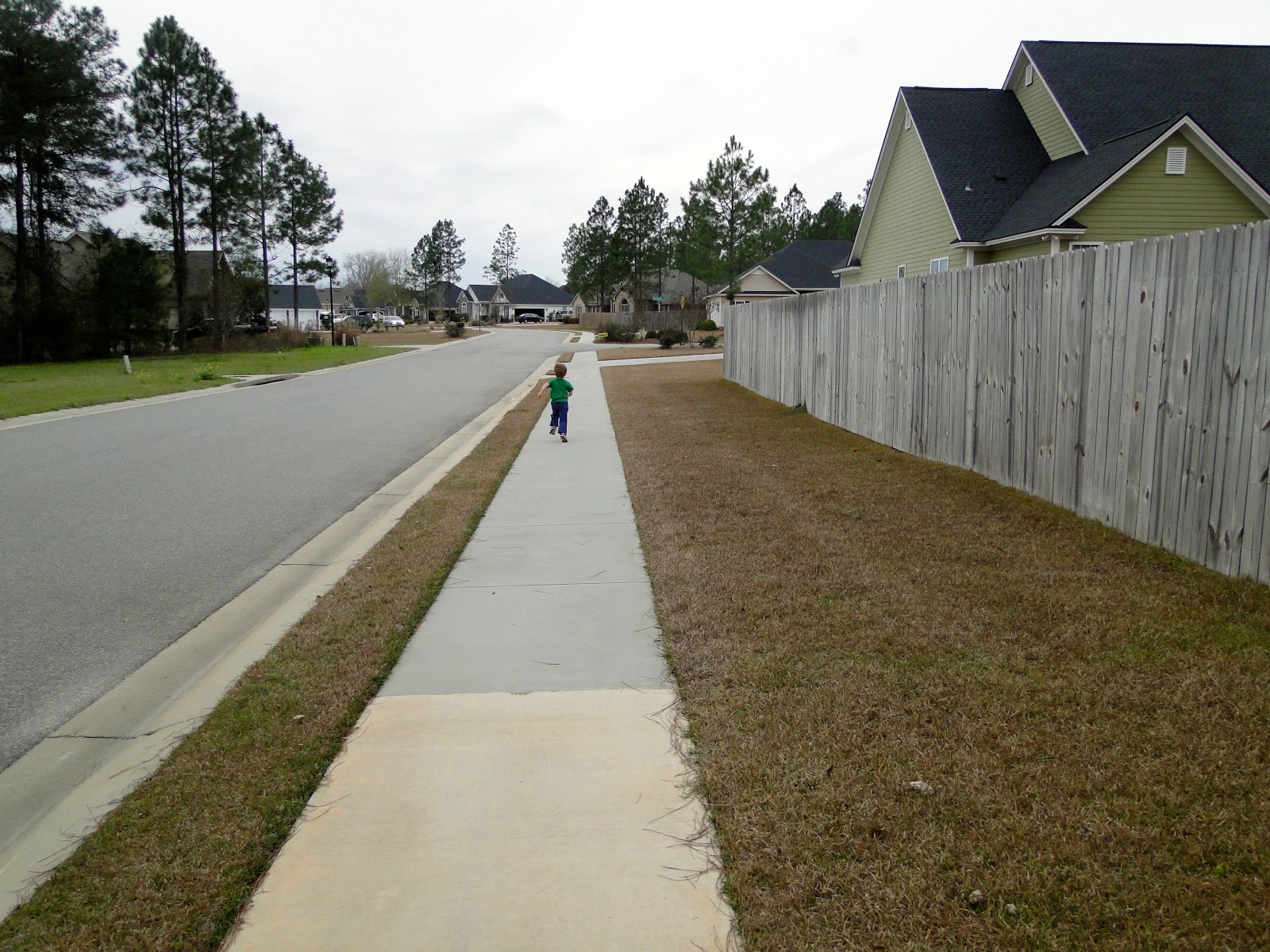 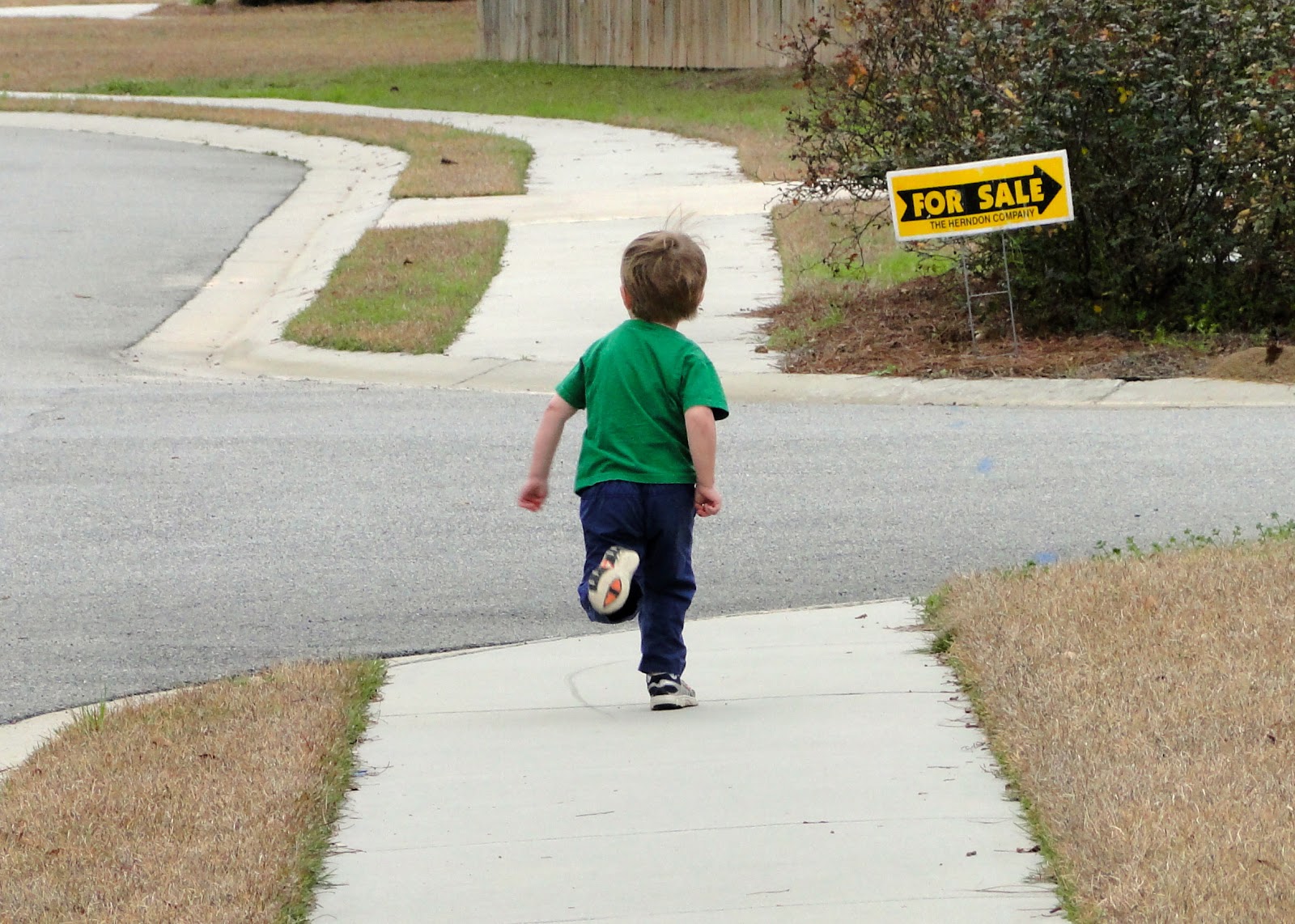 Stopping and waiting for us to catch up! 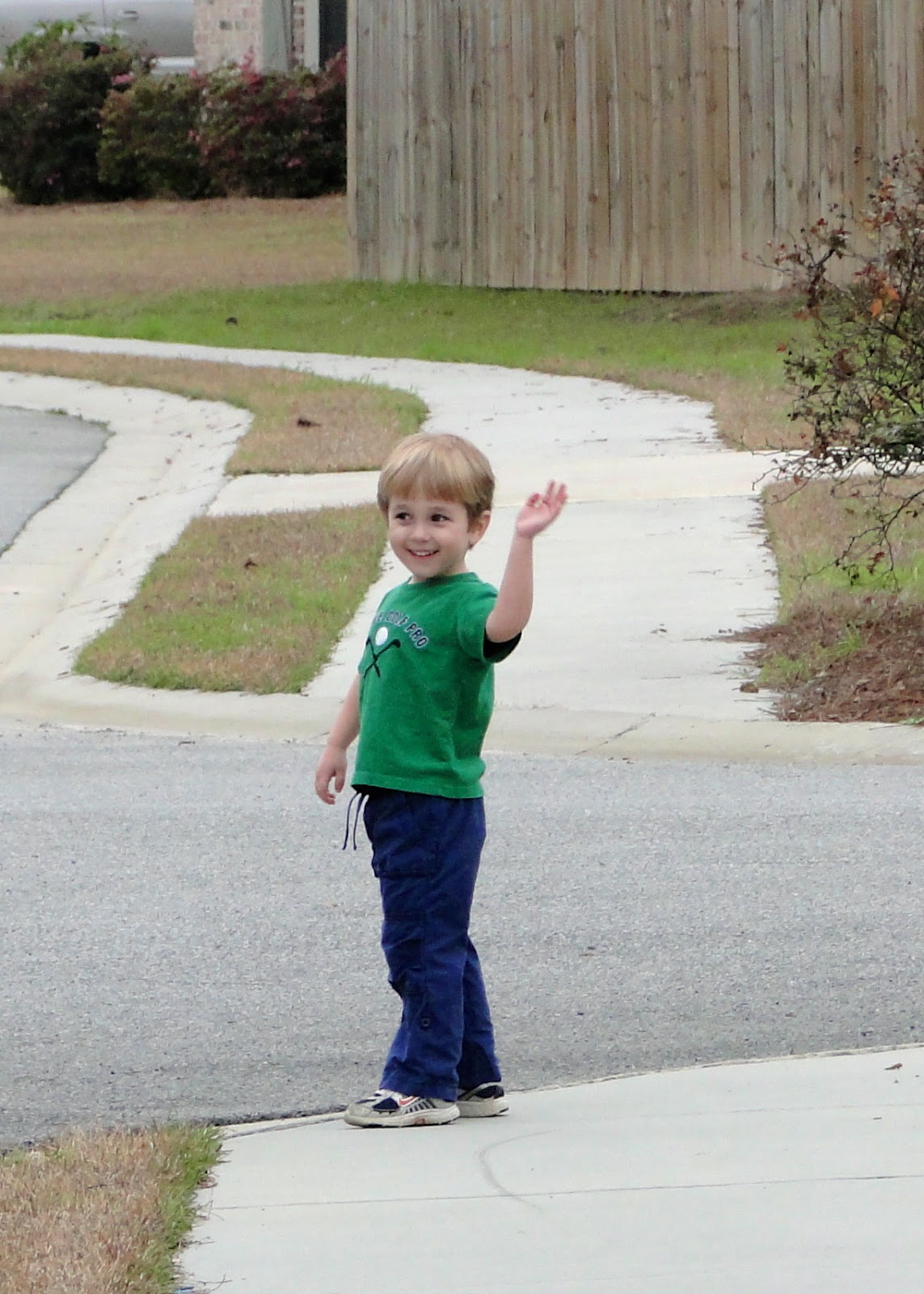 Playing: Of course we did a lot of playing! We always do, right? 😉 Kye has started to “wise up” and realize that anything he plays with, Britt will also want to play with. He will try to make her stay away from his stuff but I have set a firm rule: we all SHARE our house. Anything he has in the living areas of our home (living room, dining room, playroom, kitchen, bathroom, etc) are COMMON property and she has equal right to play with them. If he wants to take toys into his room he can close the door and play by himself without her interruptions however he will be by himself. Sometimes he chooses to do that and that’s fine. I am a firm believer in each kid having their own space that is theirs and sometimes we all need time alone to decompress. However, most of the time Kye chooses to be with the family and plays with his toys in the living areas and has figured out ways to keep Britt from messing up his set ups. He’ll give her some of his toys to play with but put them in a separate area so she’ll stay away or he’ll just let her play with him and I may have to go help him re-fix things as she accidentally messes them up. Sometimes she gets on his nerves but I just remind him that it’s HIS choice to play in the living area or he can go into his room to play. So far, it’s a great system! 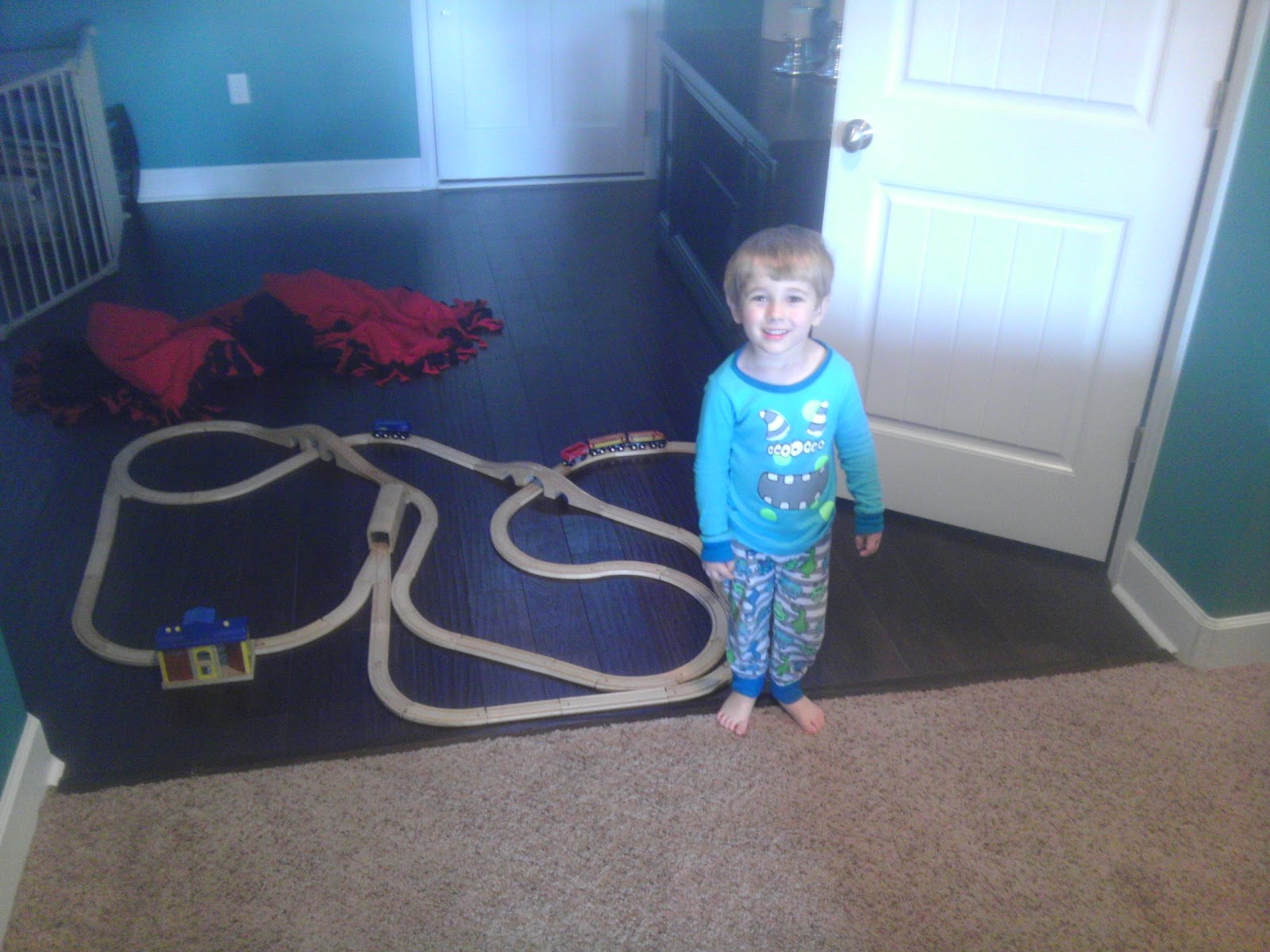 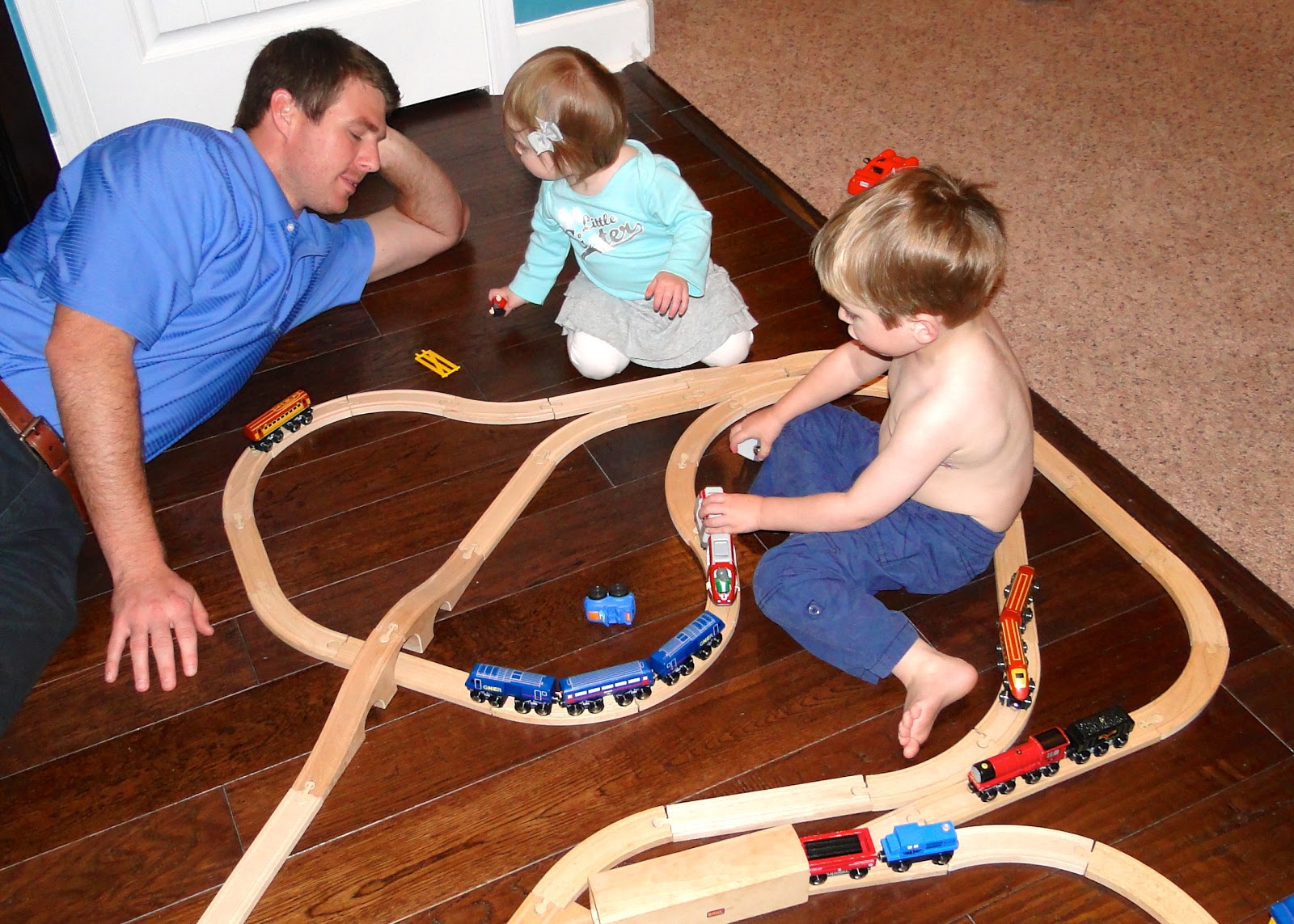 We also play in Britt’s room a LOT and I do have to remind Kye that it is HER room. Just like his room is his place, her room is hers and if she wants to play with something he must let her in her own room. Even if it means things get “messed up.” I also remind him that the toys in her room are HERS. And how nice it is of her to share all of her things with him. This month we had a LOT of “parties” in Britt’s room. On this particular day it was Mickey’s and Goofy’s birthday party 🙂 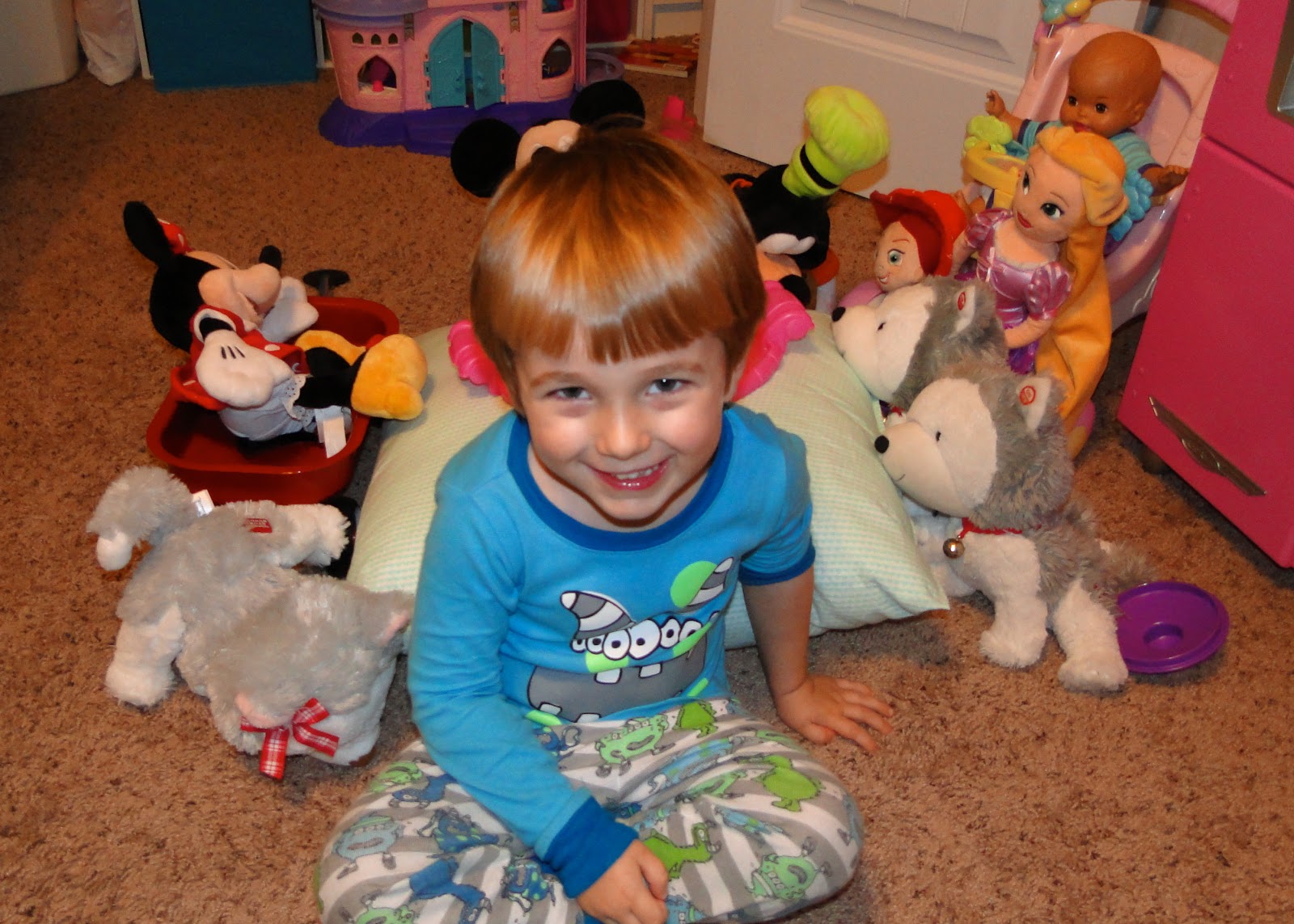 This month G-Mama’s dream FINALLY came true and she got a playground at her house for the grand kids! It will be used a lot more by Colt and Payton obviously since they are over there every day but Kye was still super thrilled about it! Zach and Kye went over there to help finish building it one Saturday then we all met up there that afternoon and had a big family dinner and let the kids break it in! They were SO pumped!!! 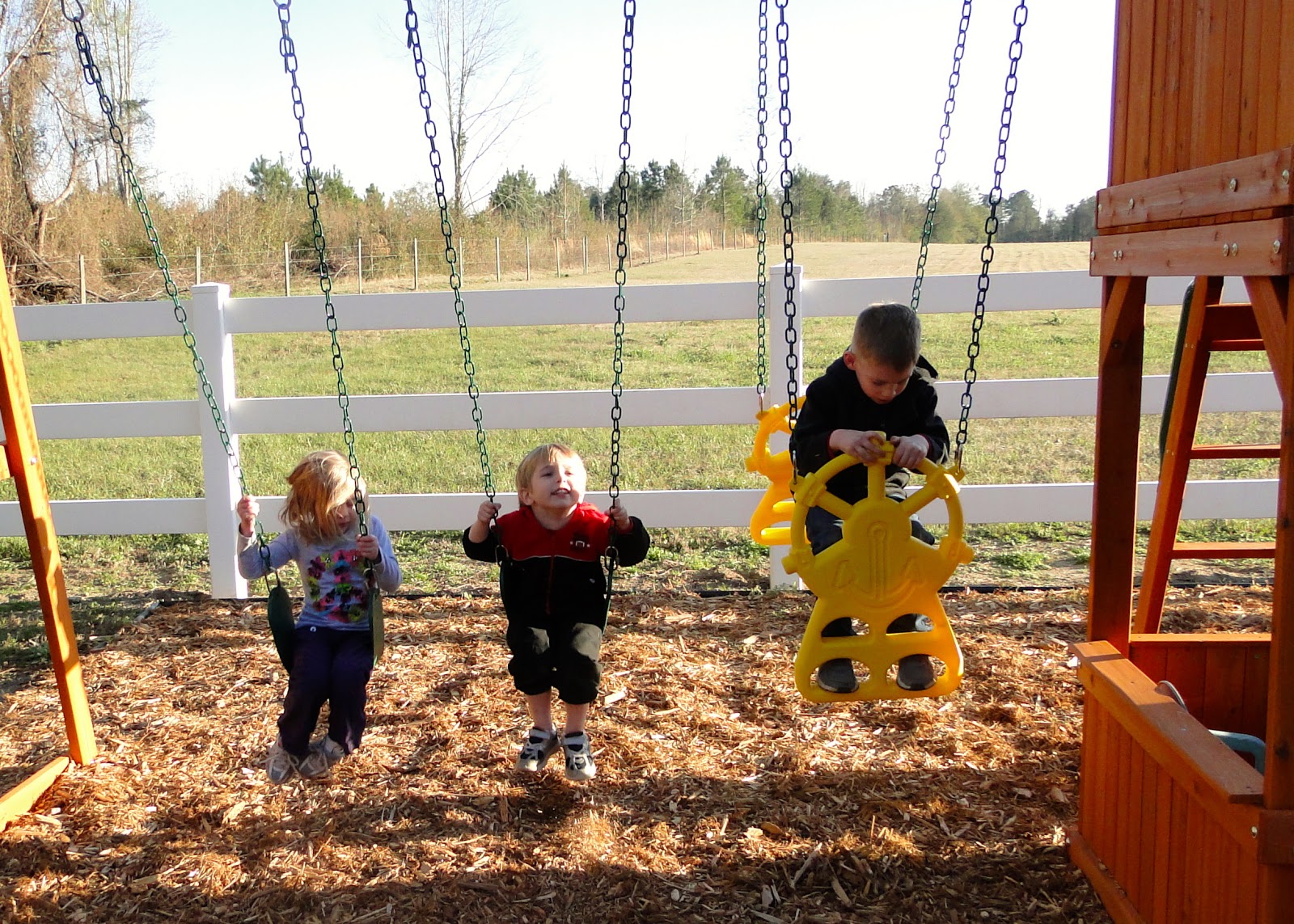 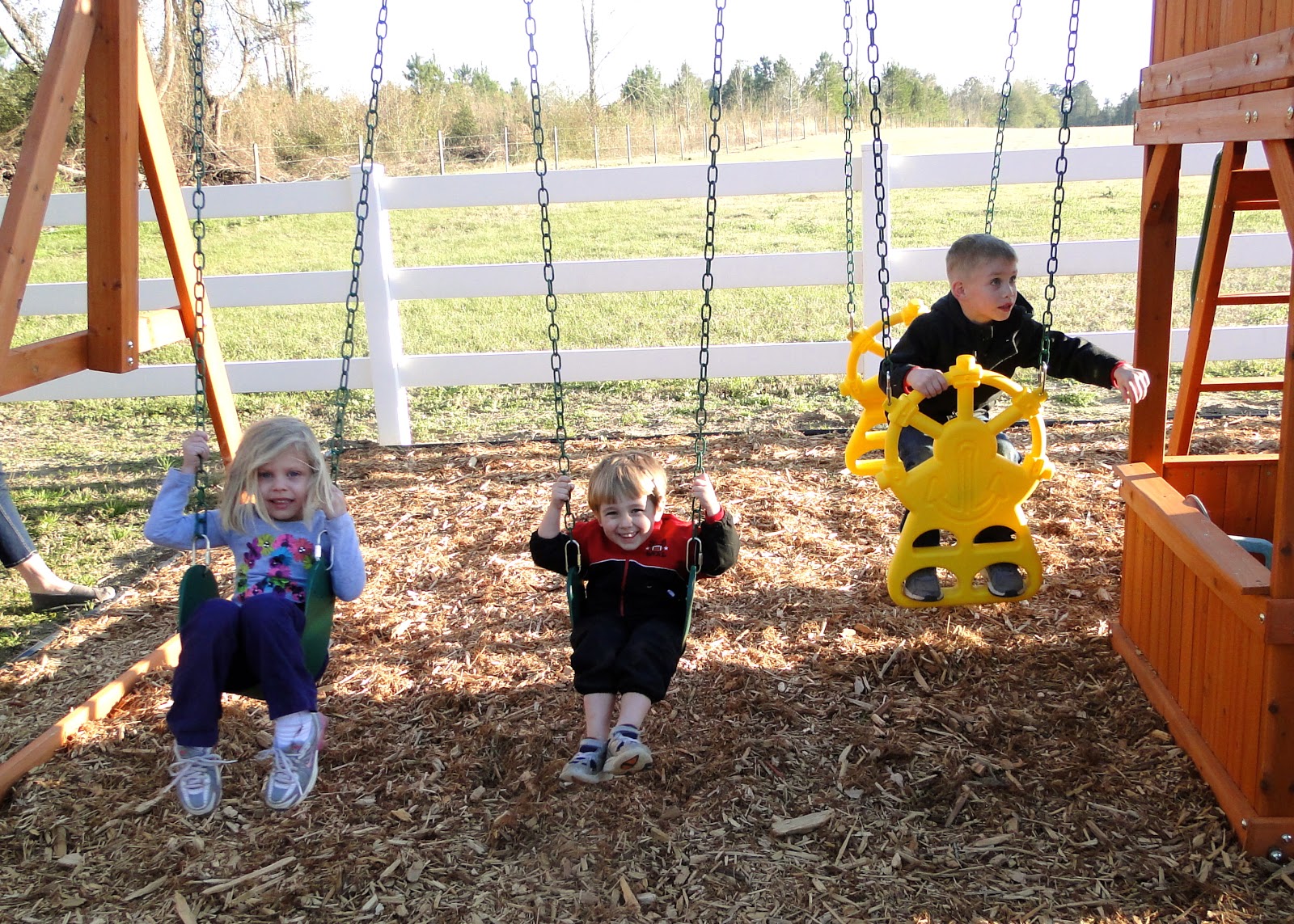 Checkers: As a kid growing up we had one of these checkers sets…I think they are from Cracker Barrel? When I saw it on sale at one of the kid’s sales I go to I had to grab it! It was only $3 and actually had DOUBLE the amount of checkers with it…score 🙂 For our game time with Kye one night we busted it out and I was surprised by how much he actually enjoyed it. Of course we did a simplified version where he got to “jump” a lot of my checkers…but it was a good way to introduce a classic game. I can’t wait until he and Britt can play it together the same way my brother and I did when we were kids 🙂 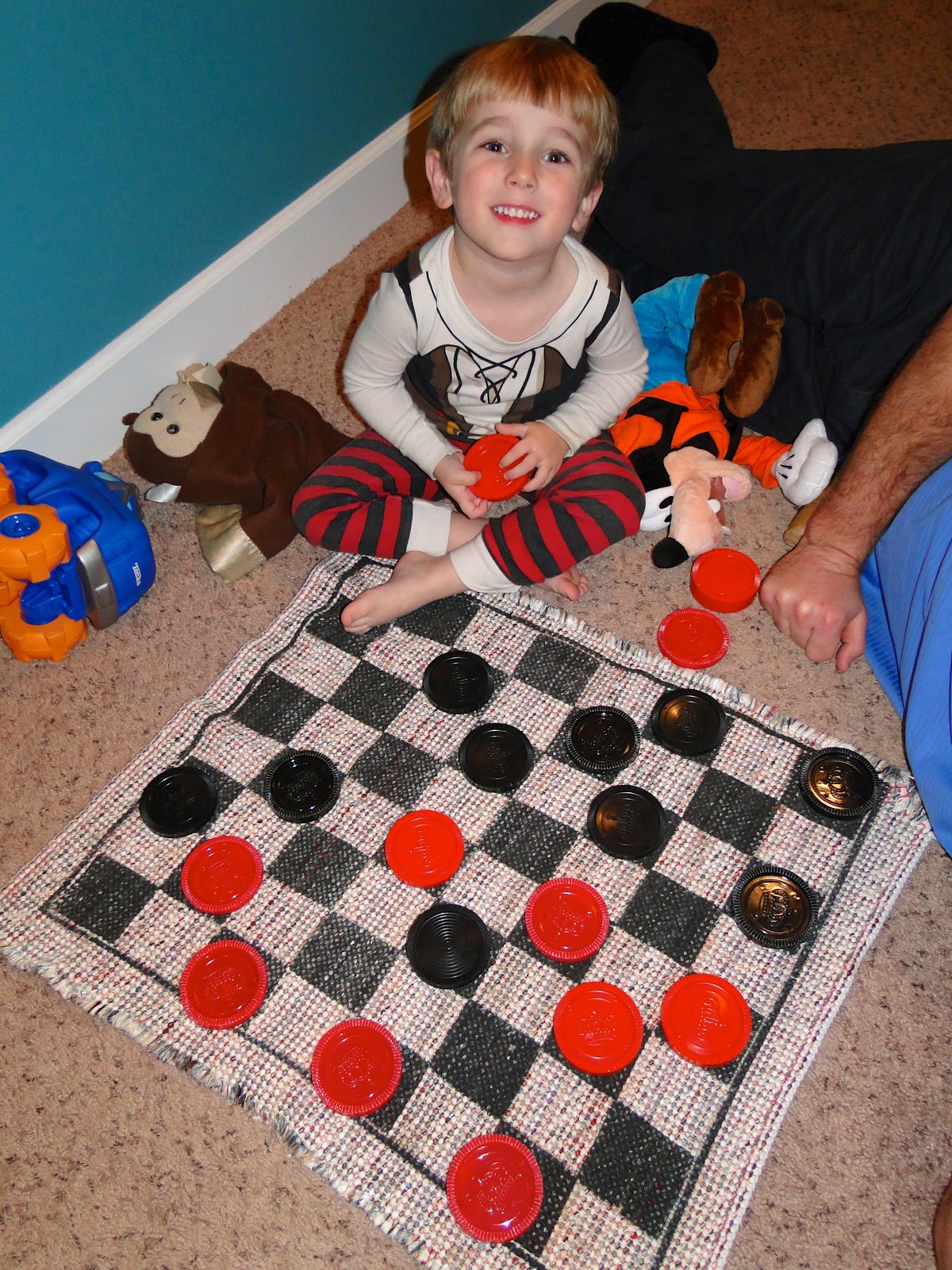 Tattoo: At his Valentine’s Day celebration at school someone gave out tattoos as party of their Valentine’s and Kye was so excited. He thought the Spiderman tattoo would turn him into Spiderman. Which is funny in itself as he’s never seen anything about Spiderman before. All of his superhero knowledge comes from school and his classmates and I guess Spiderman must be a popular one? Because it’s the one he will talk about the most! We let him pick a spot for the tattoo and he picked on his ribs. SO RANDOM. I kept telling him it was a FAKE tattoo and would wash away and he didn’t believe me. He kept cracking up and telling me that I was kidding with him and that it would be there forever. I guess he totally forgot about it because it faded/washed away within a couple days and he’s never mentioned it again! 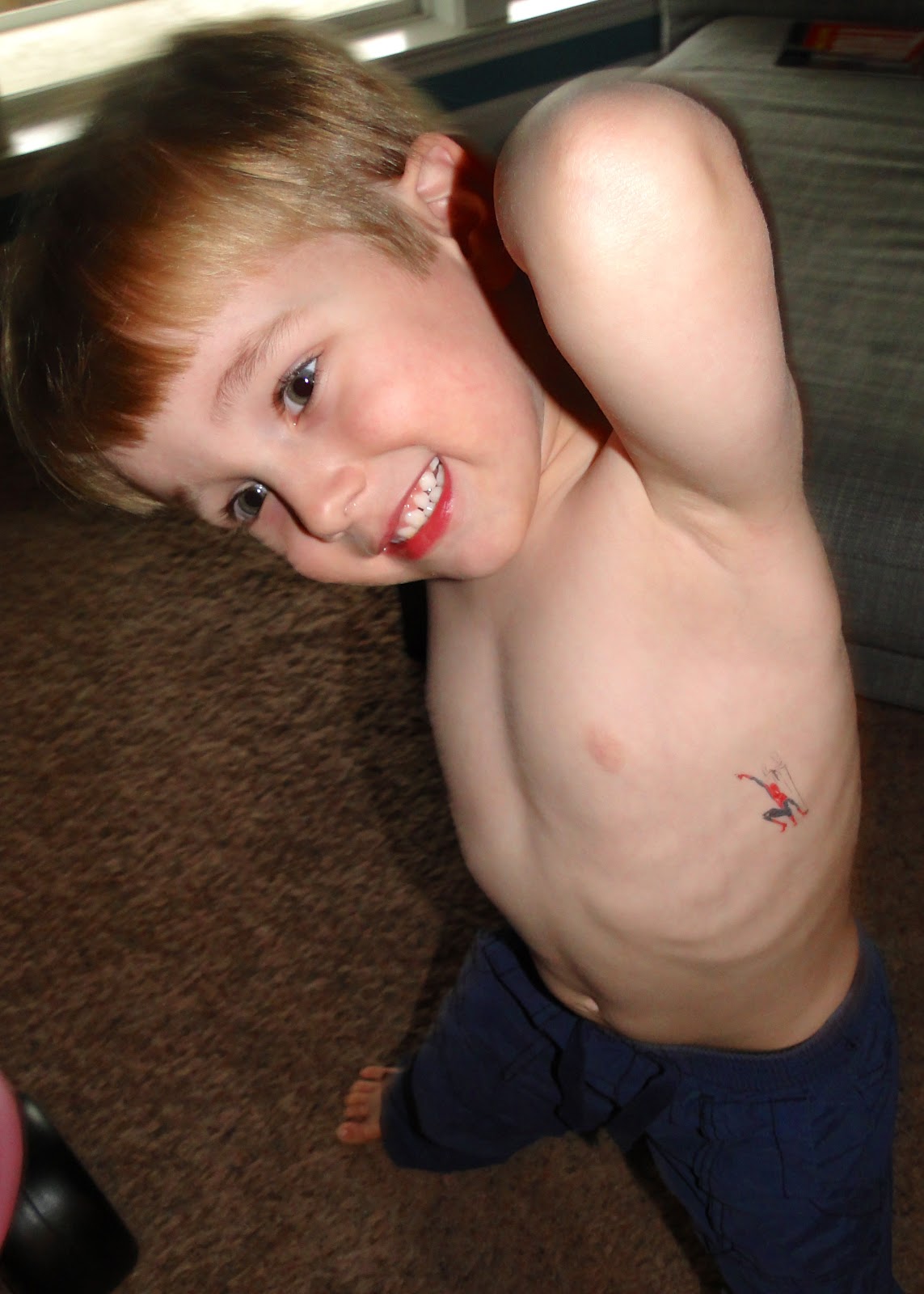 Super Bowl: The Super Bowl always starts pretty early so this year we let Kye watch a little of the game with Zach. I’m SO thankful for DVR as we were able to skip through all the commercials. On our way home from church Zach wanted a “Super Bowl Treat” so we drove through Taco Bell. Kye shared some of Zach’s tacos with him while they watched. True American Guy Time at it’s finest, right? They were both completely zoned out haha 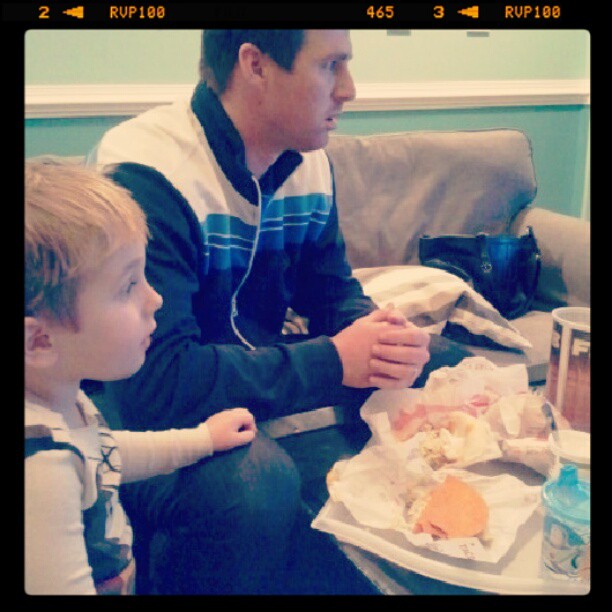 Ironing: I have NEVER been a fan of ironing. I avoid it at all costs. Zach has always done his own ironing and will often even iron my stuff for me if it really needs it. When we upgraded our washer and dryer a few years ago we purposefully bought one with a dryer setting to use to get wrinkles out of clothes. It works well so most of the time I can avoid ironing all together. It’s not that I really MIND ironing, it’s that it takes up SO much time AND I feel like I’m just not good at it? Like I’ll get done and there will be new creases in places that aren’t supposed to have creases haha. Having a boy who wears a TON of golf shirts and dress shirts means that ironing is a must. No dryer setting can make those shirt collars lay perfectly! Instead of ironing as he wears things I instead do ALL of his stuff at one time. I like to do it while watching tv and typically can get away with only doing it a couple times a year. If he wears a dress shirt and doesn’t get dirty then I just hang it up and have him re-wear it again. So far it’s a good system that works for me. I ironed all of these shirts during an episode of The Bachelor. Yes, there are over 40 of them. It’s ridiculous how many shirts this kid owns. What’s even worse is that when I took them all out of his closet to iron them it didn’t even make his closet look empty! He has a LOT of clothes but I consider it an investment since we won’t have to buy much of anything when we have another son someday, right? 🙂 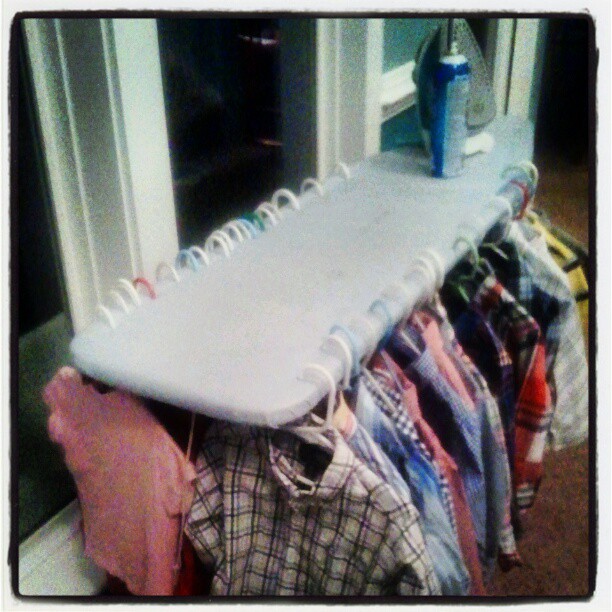 Other Stuff Kye was up to This Month:

Kye asked me to take this picture of him looking “funny” 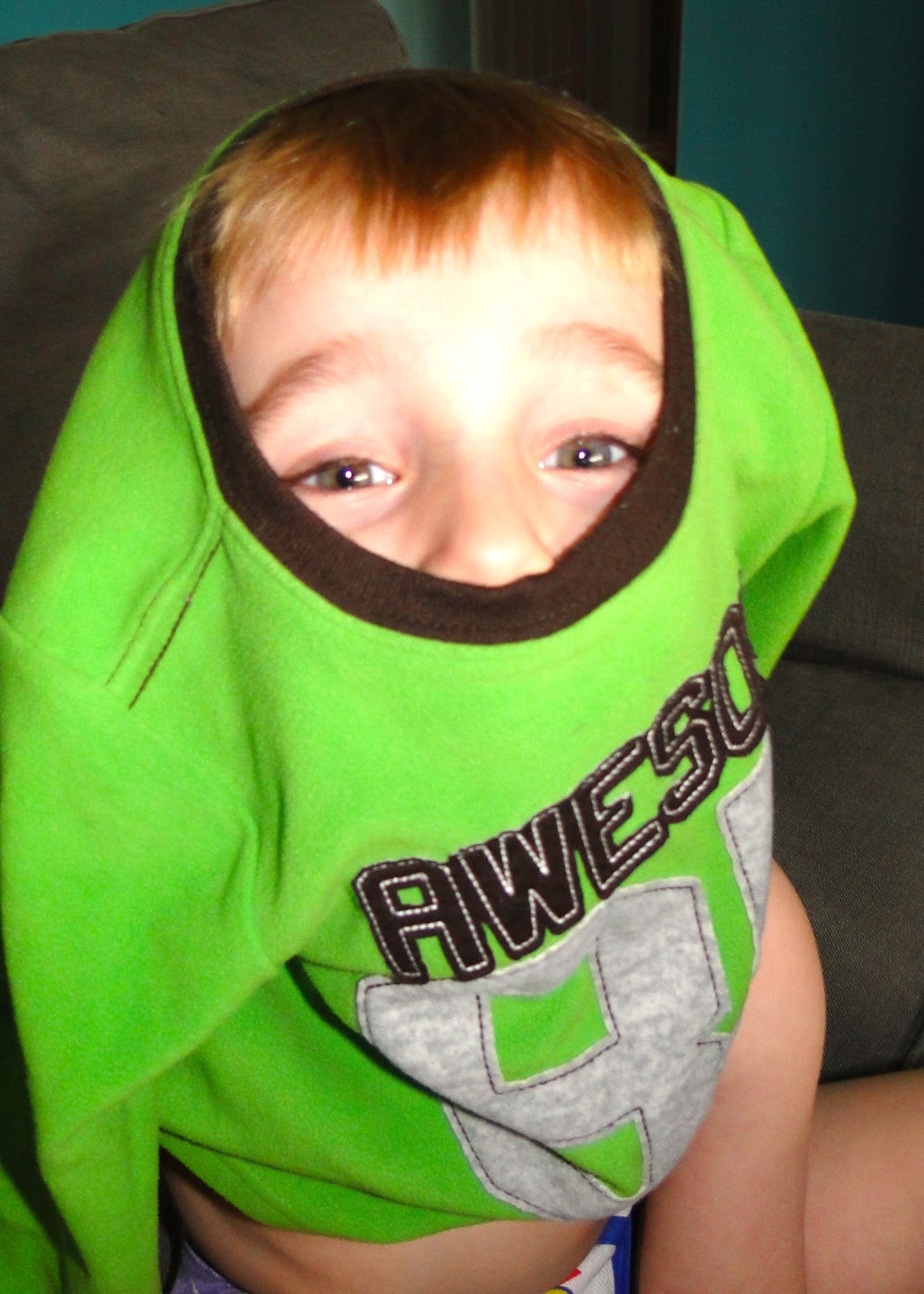 Cool bird on our back fence…a hawk? I know NOTHING about birds 😉 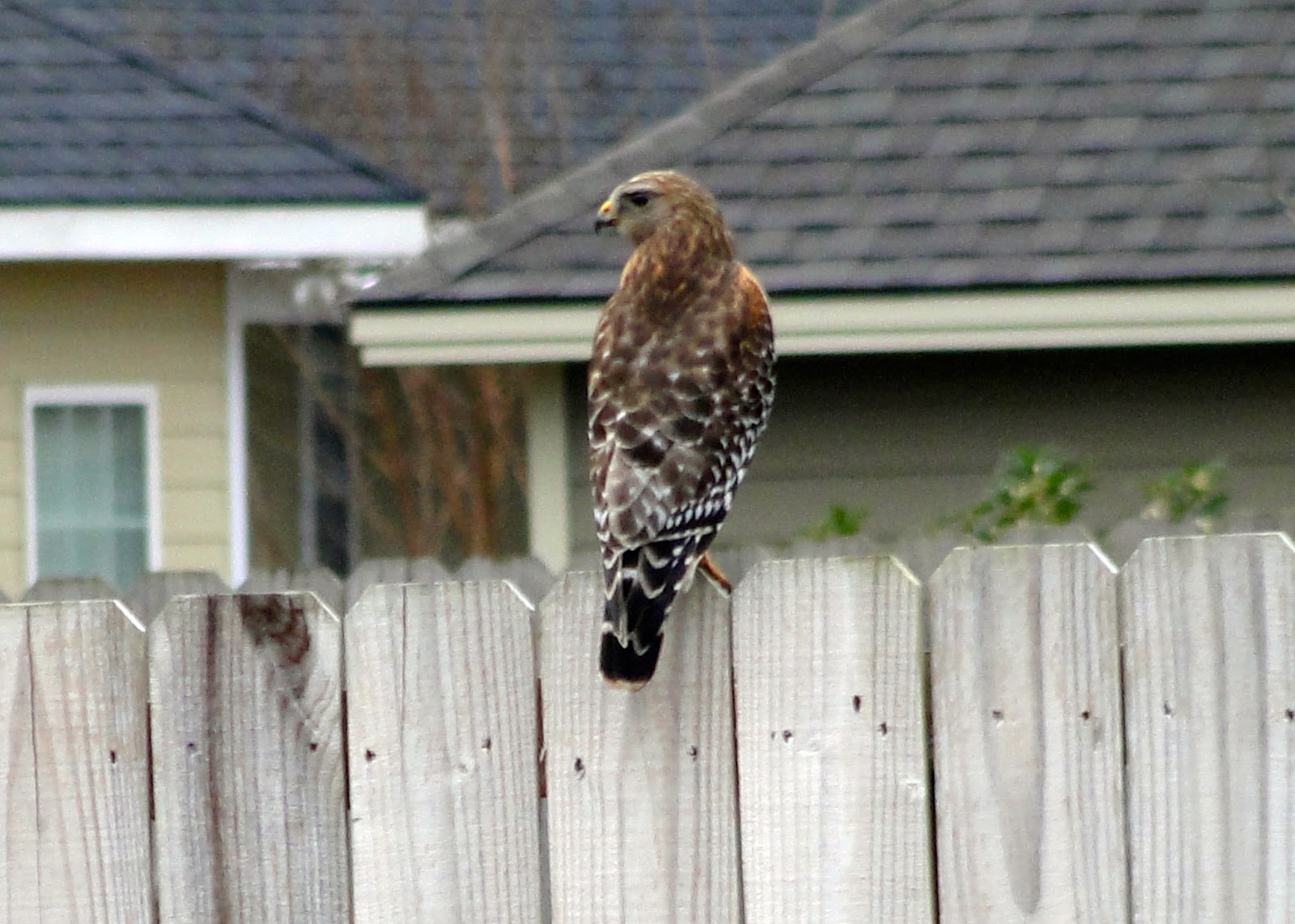 I love that Kye is at such a sweet, loving stage right now. He truly loves his mama so much and I take full advantage of it. I’m not sure how long his sweet hands will stay this chubby or how long he’ll continue to let me hold his hand in mine but I’m just savoring every precious moment right now 🙂 I can’t believe my baby is getting ready to be FOUR! 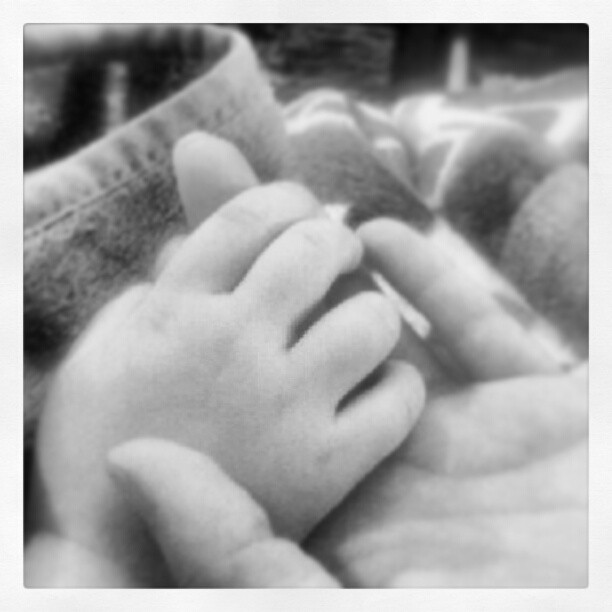