Okay so I know the show has been on forever…but I have never watched TLC until my pregnancy! I started with A Baby Story and now I am IN LOVE with Jon and Kate Plus Eight. It is so awesome to see such a huge family and how they manage it all! 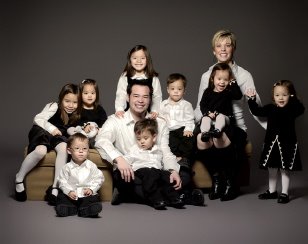 The main reason I fell in love with the show is that they are Christians. You can see little bible verses on notecards around their house and they often talk about God and the importance of Him in their lives. I read their website today and was even more inspired. So many doctors told them to abort some of the babies when they found out there were SIX in Kate’s tummy but she and Jon didn’t listen. The website mentions God over and over and how they knew He’d get them through anything!

When I told Zach how impressed I am with them and their Christianity he said “Well duh they are Christians..do you think God would allow a couple to have six babies at one time if they weren’t?” That made so much sense to me! God blesses those who worship Him and not only are the a blessed family with eight children but they are able to afford to live because TLC made a tv show out of their lives. They mention often on the show how greatful they are FOR the show and it’s nice to see people appreciate what they are given in life.

Also check out their webpage: http://www.sixgosselins.com/