As many of you know, I was dying for a baby girl. I wanted one so badly that Zach and I tried lots of tricks to conceive a girl (guess they worked…you can read about what we did here!). While I wanted a girl super badly, once we got pregnant things changed. We don’t find out the sex of the baby until it’s born so I was worried that I’d spend nine months wanting a girl then if I had a boy I’d be mega upset. Right when I found out I was pregnant I started focusing on the positives about baby #2 being a boy…so much so that I SERIOUSLY changed my mind and hoped Blitzen would be our second son!!! One of the first things everyone asked me after Brittlynn was born was if I seriously did want another boy or if I was just saying that so I wouldn’t be disappointed if she had been a he…well I PROMISE you, I really did want a boy!!!

Once she arrived I still wasn’t hardcore excited that she was a girl. The only positive girl thing I kept thinking was that I’d get to help plan her wedding someday 🙂 Once we got home from the hospital though, it started to sink in that I have a daughter. At first everyone said she looked just like Zach. Which is pretty annoying because they said the same thing about Kye. And still do. I mean he may look like Zach but he’s def. not an exact copy of his father (the way Crissy’s kids look like Seth!!!) and I see traits of us both in him so it irks me when all people say is that he looks like his daddy. When we got home and I looked at MY baby pictures I KNEW everyone was wrong about Brittlynn. She is NOT her daddy’s child…she is 100% mine 😉

Me fresh out of the womb (I mentioned my tough delivery in Brittlynn’s delivery story…you can read it here to know why the black eye!) 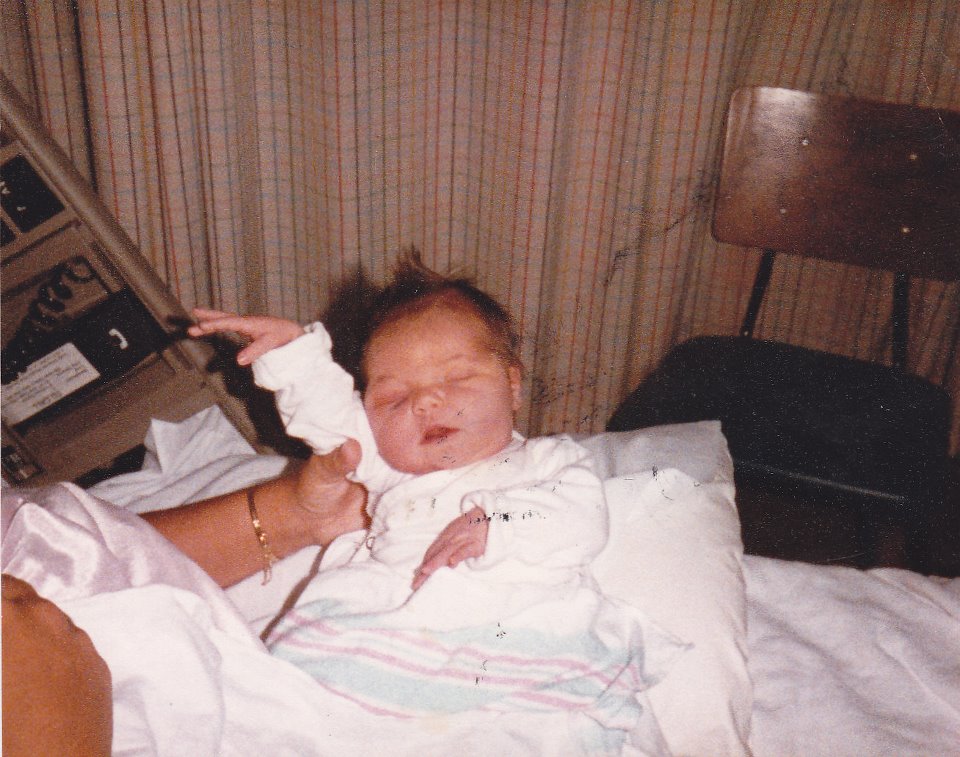 I was also a semi-Christmas baby (Nov 1st bday!) 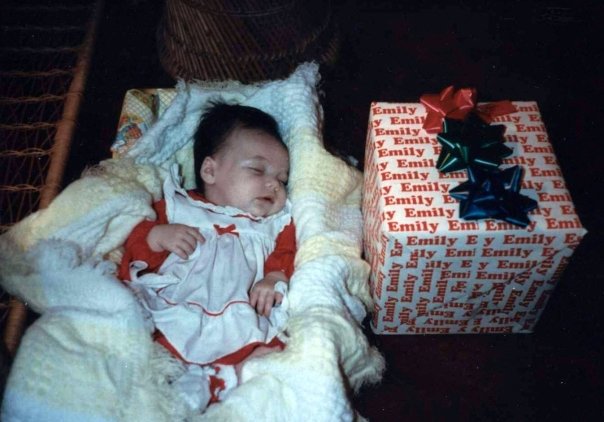 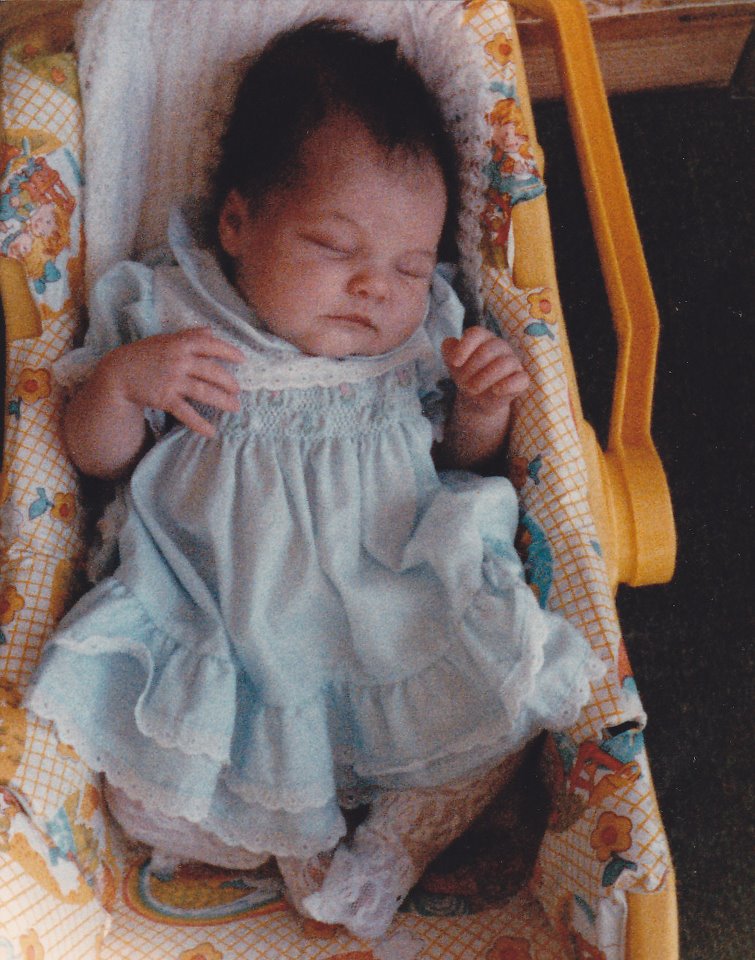 Here’s Brittlynn as a newborn 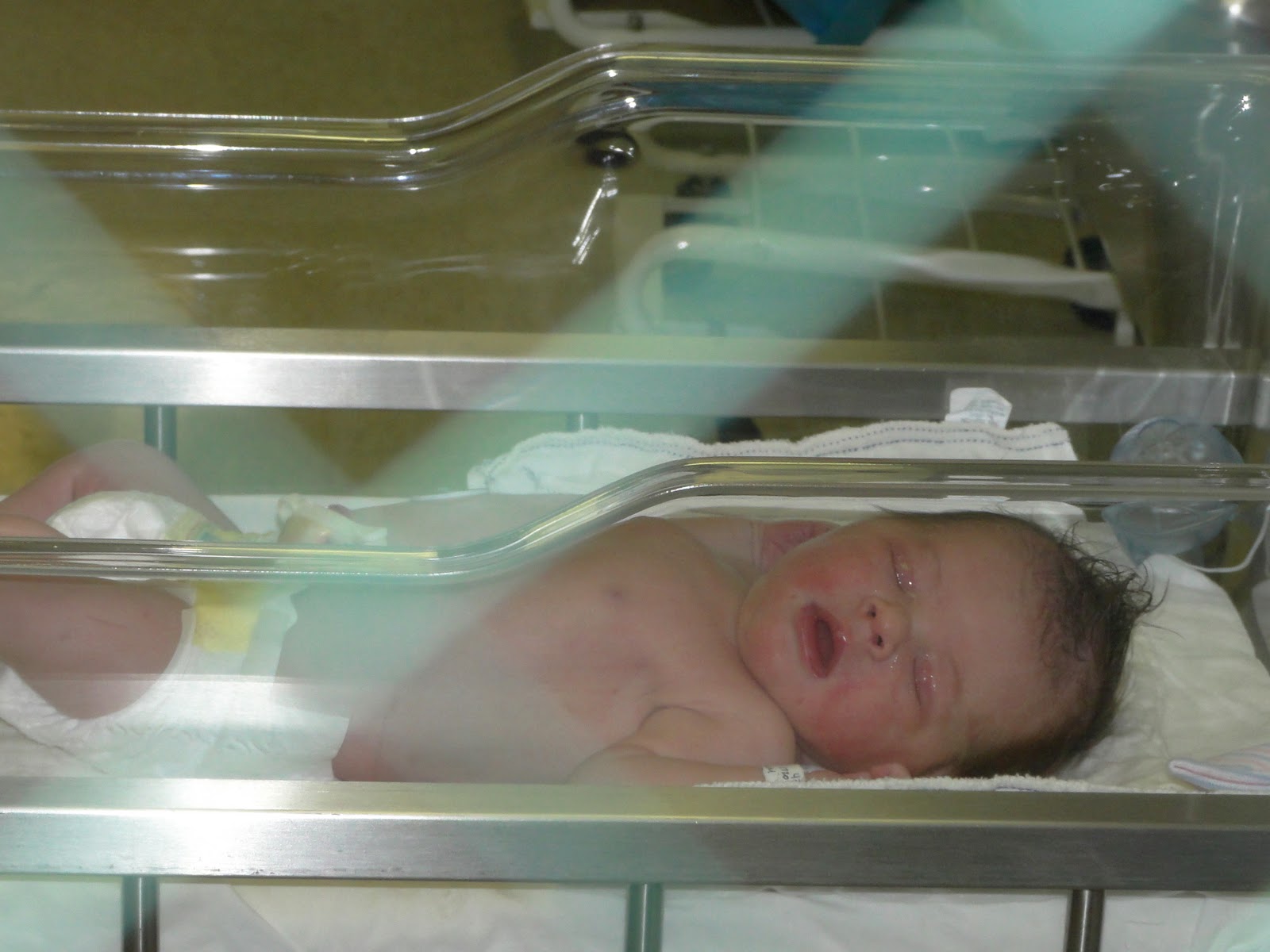 Tell me we don’t look alike?!?!
(and it’s okay to say it…I KNOW she’s a pretty version of my newborn self!) 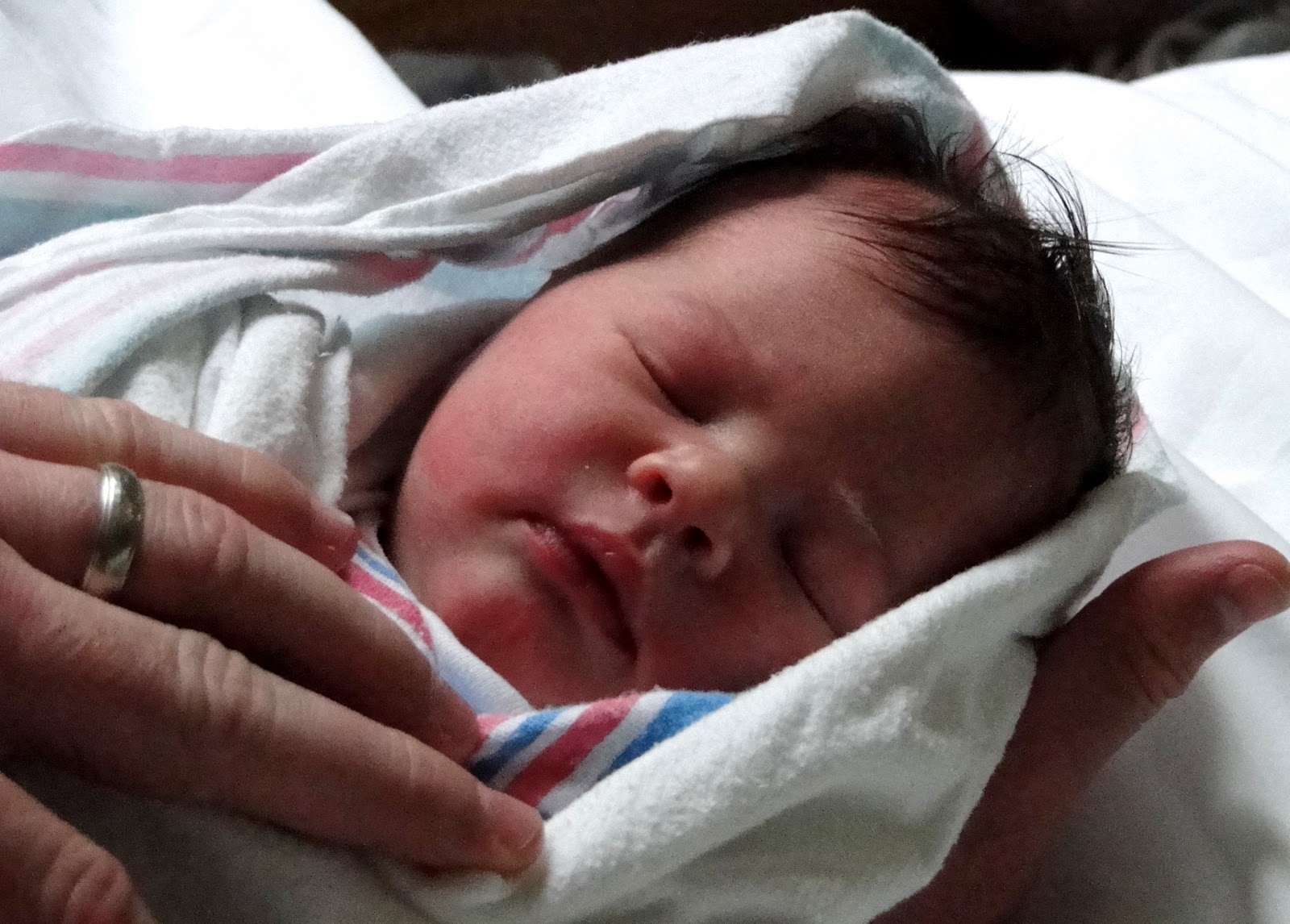 Seeing our similarities made it more exciting that I have a daughter…but it REALLY got exciting when Mom brought over a bunch of my baby clothes to pass along to Brittlynn. How neat is it that she’ll be able to wear things that I wore? That someday we may even be able to share clothes? That we will get to enjoy girly things together? Have fun spa days? Play with Barbies? That she’ll get to enjoy the same loves I had as a girl? That I’ll no longer be the only one to get crunk over meeting a Disney Princess? That we will both giggle about boys? Lay out in the pool while we watch the guys mow the grass? There are SO many wonderful things that we’ll get to do together! So many firsts I’ll get to experience as a mother of a girl instead of a son.

Don’t get me wrong, I LOVE having a boy. Kye is a-mazing and our relationship is so special. But I’m thrilled to now have a daughter as well. As an adult the saying is SO true “a daughter is yours for life but you lose your son when he gains a wife.” Zach’s mom went through it when we got married. My mom went through it when Brandon got married. It’s a fact of life (and it’s part of God’s plan so I’m not hating on it…it’s just tough for the mamas to let go of their sons!), and I’m thankful that I now have a daughter that I’ll never have to “lose!” Yes, I’ve heard of some mother and daughter relationships that aren’t ideal…and I know that could happen but most mothers and daughters I know only become closer and closer as they get older!

I know girl’s tend to be tougher to raise, especially during the teenage years, but I have good memories of those times too with my mom. Asking her every day if an outfit looked okay. Shopping together. Coming home and telling her every detail of my day and what guy I liked. Kye ALREADY hates talking to me! He’ll say “I don’t want to talk right now” and I have to leave him alone and not ask too many questions (such an alpha male like his daddy). Sometimes it’s lonely for me to not have anyone to talk to since Zach doesn’t enjoy too many questions either…so once Brittlynn starts talking she better be ready! 😉 I know not all girls are the same, but most women I know enjoy talking and sharing feelings and I look so forward to those special conversations with Britt!

Mom with my baby clothes!
A lot are cute…a LOT scream ’80s…once she can fit into them I think it’d be fun to do an 80’s flashback photo shoot of her in them all. Good black mail pics for when she starts dating 😉 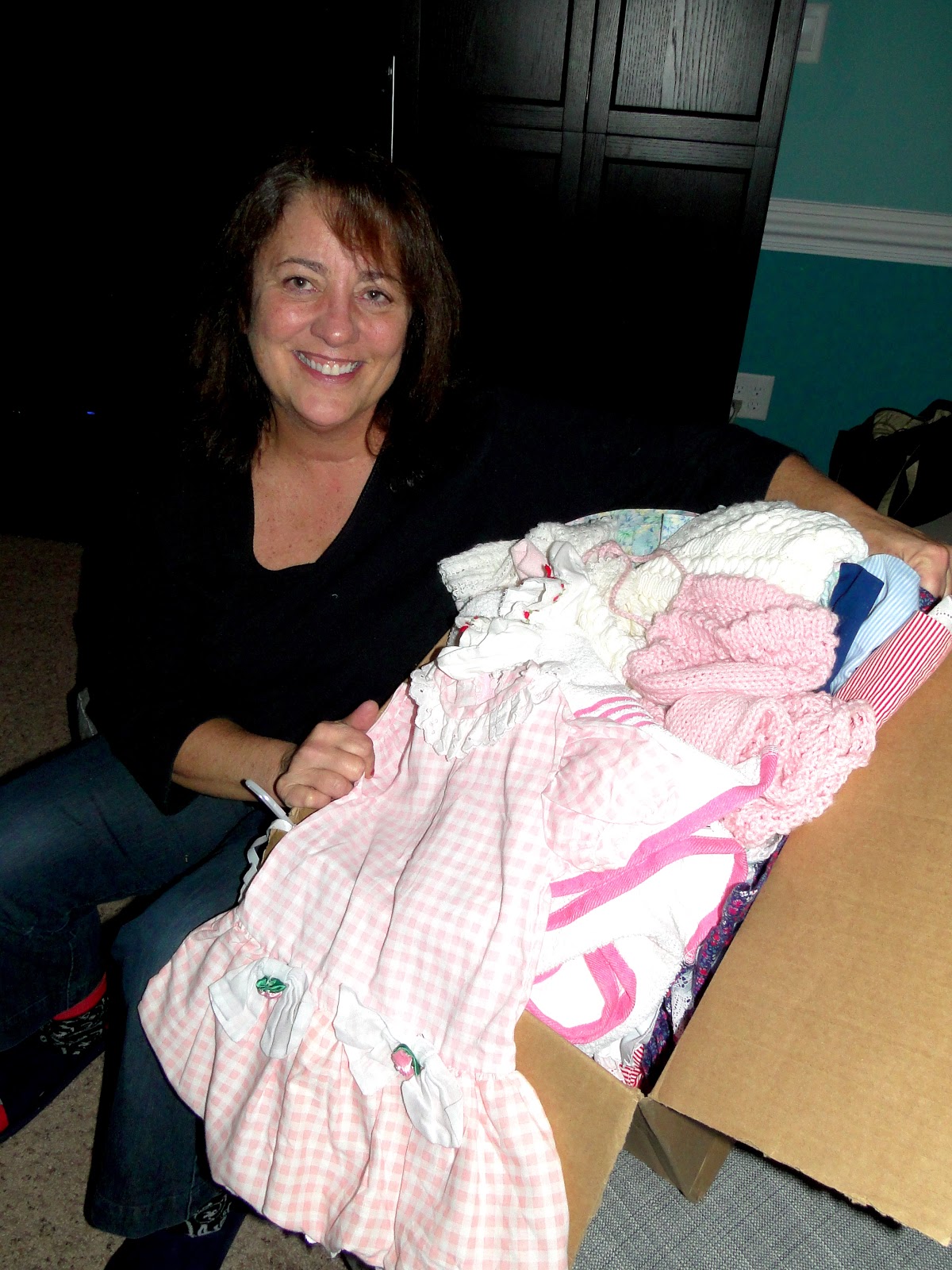 Late one night when I first got home from the hospital and was up nursing her, I watched an episode of Parenthood (I’m like 11 episodes behind but it’s my FAVORITE show!!! That and Up All Night are great!) and it was a prom episode. It was so neat because I related to both the parents of the guys going off to prom…and the parents of the girls. Having one of each allows Zach and I to experience both and it’s such a blessing. It also makes me mega pumped for baby #3 because either way we’ll know what to expect and will already have tons of clothes and toys waiting for them 😉

I also LOVE that we had a boy first. I am the older sister to my younger brother and I always wished it was reversed. Being almost 3 years apart (we’re actually only one month off from being the exact age difference of Kye and Brittlynn, as are Zach and his younger sister Casey!), we could never “date” each others friends. I was always the “protector” when really you’d rather have an older brother to be protecting you ya know? Zach is the middle child (and only son…you KNOW I had a tough time breaking into that family haha) with both an older sister and a younger sister and, from an outsider prospective, I like the dynamic of his relationship with Casey (especially when they were in high school) better than the one with Courtney. Zach DID protect her and still has this protective instinct over Casey. I’m excited to see how Brittlynn’s and Kye’s relationship develops through the years. I’m already praying that their future spouses all get along with each other as I know that’s critical in order for Kye and Britt to remain close through adulthood!!! Zach and Casey are way closer now that she and I have become good friends than they were when we didn’t get along…and now that we both adore Jordan we’re all even CLOSER so I hope the same thing happens for my children; as I know Mrs. Charlotte is overjoyed about it 🙂

One of the outfits Mom had saved was the one I left the hospital in…I thought it’d be fun to put it on Brittlynn for a little mini photo shoot. It was funny because the thing snapped up the back. I mean how did they deal back then?!? She only wore it for a little bit and I packed it away, thinking her daughter may want to wear it (another pro about having a girl…they tend to be WAY more sentimental so I’ll get to pass stuff down which will be fun!) someday too. 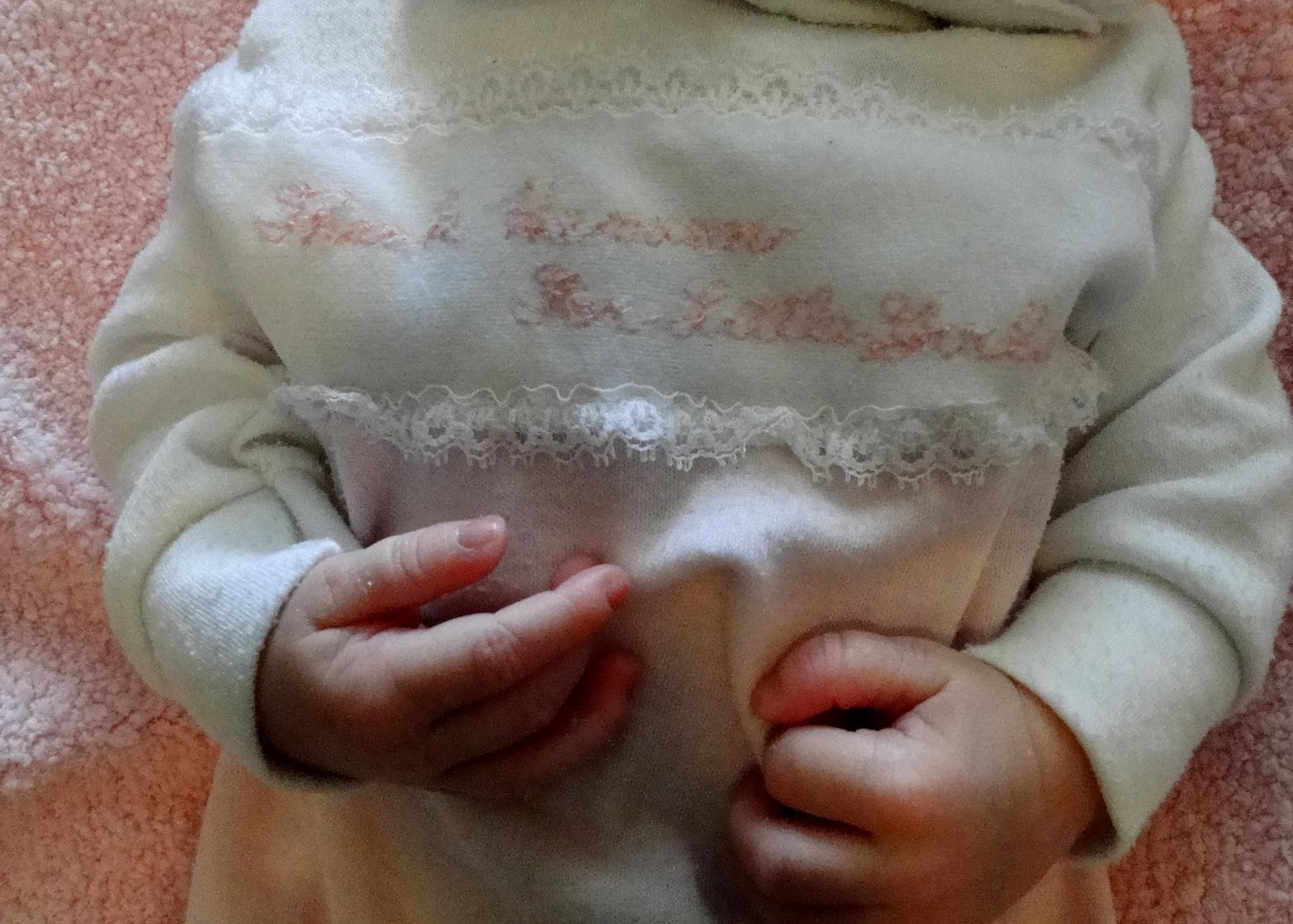 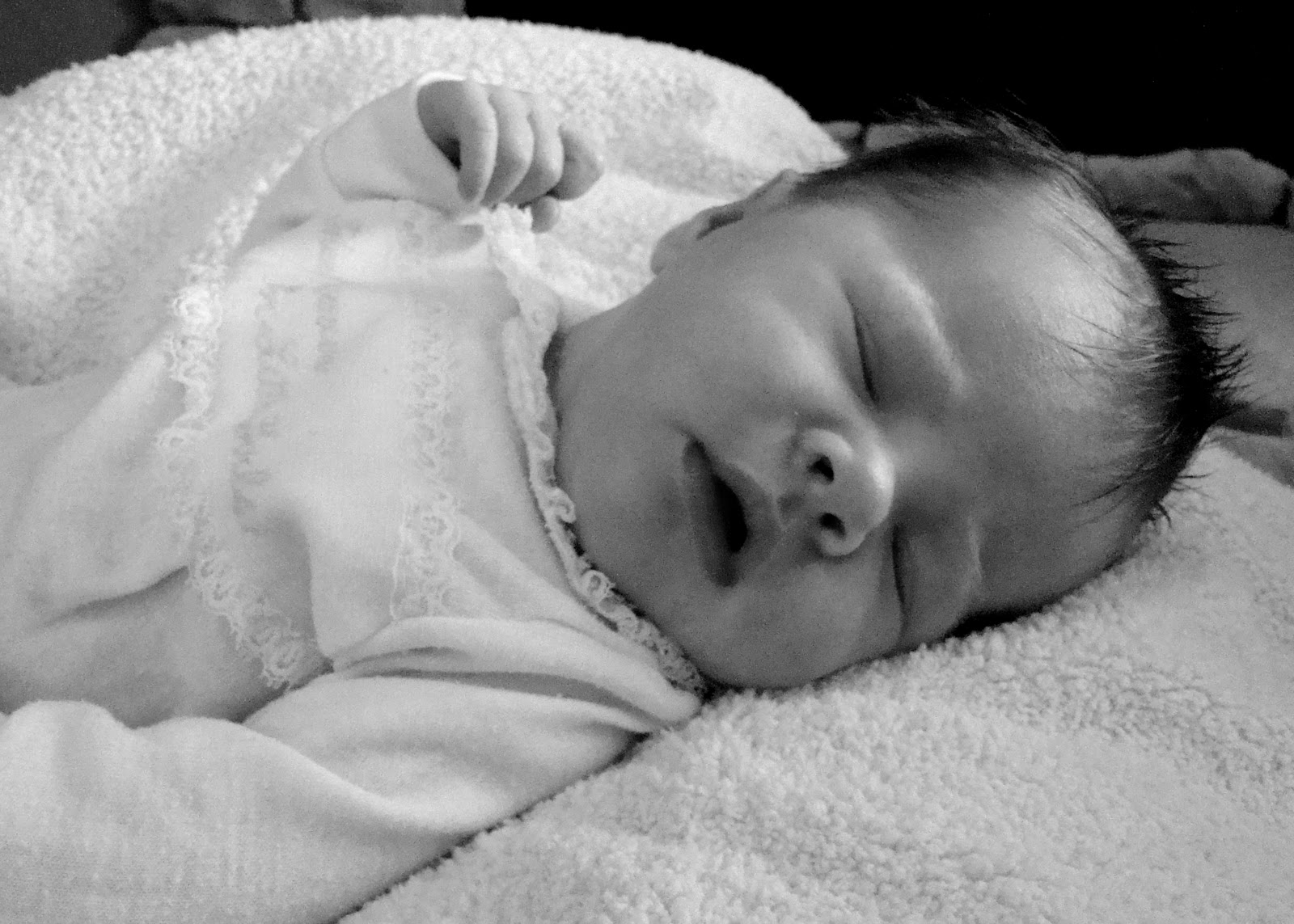 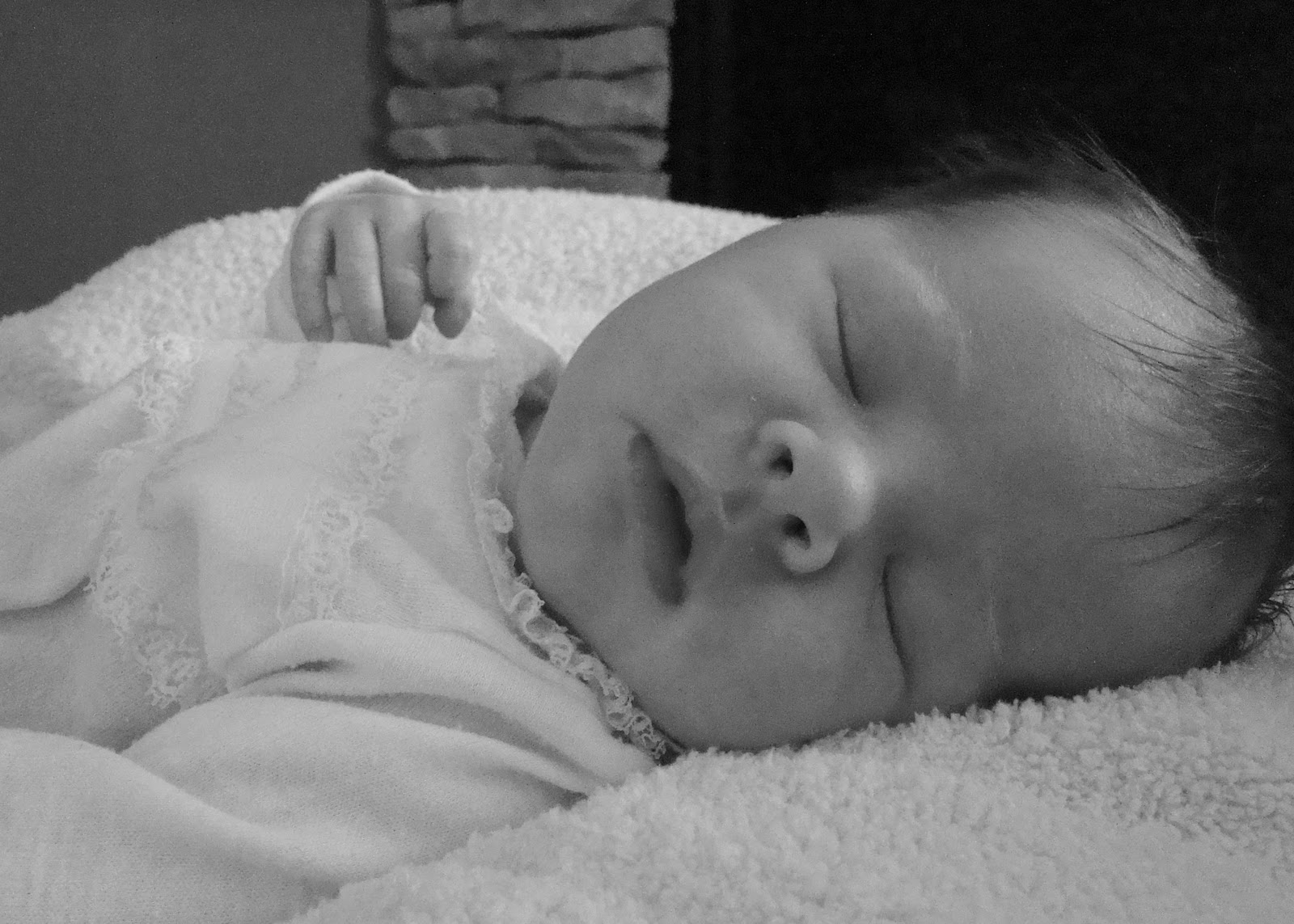 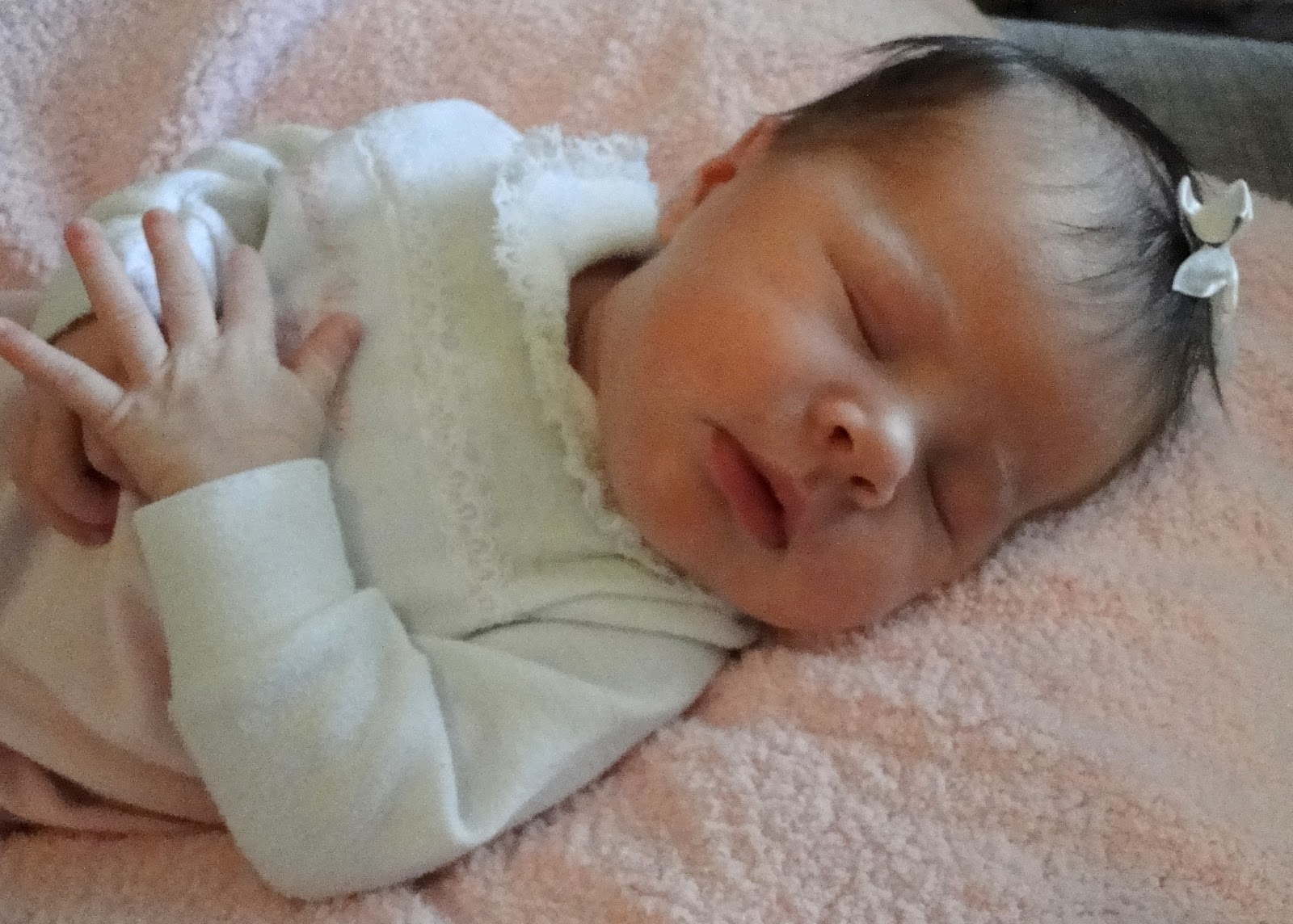 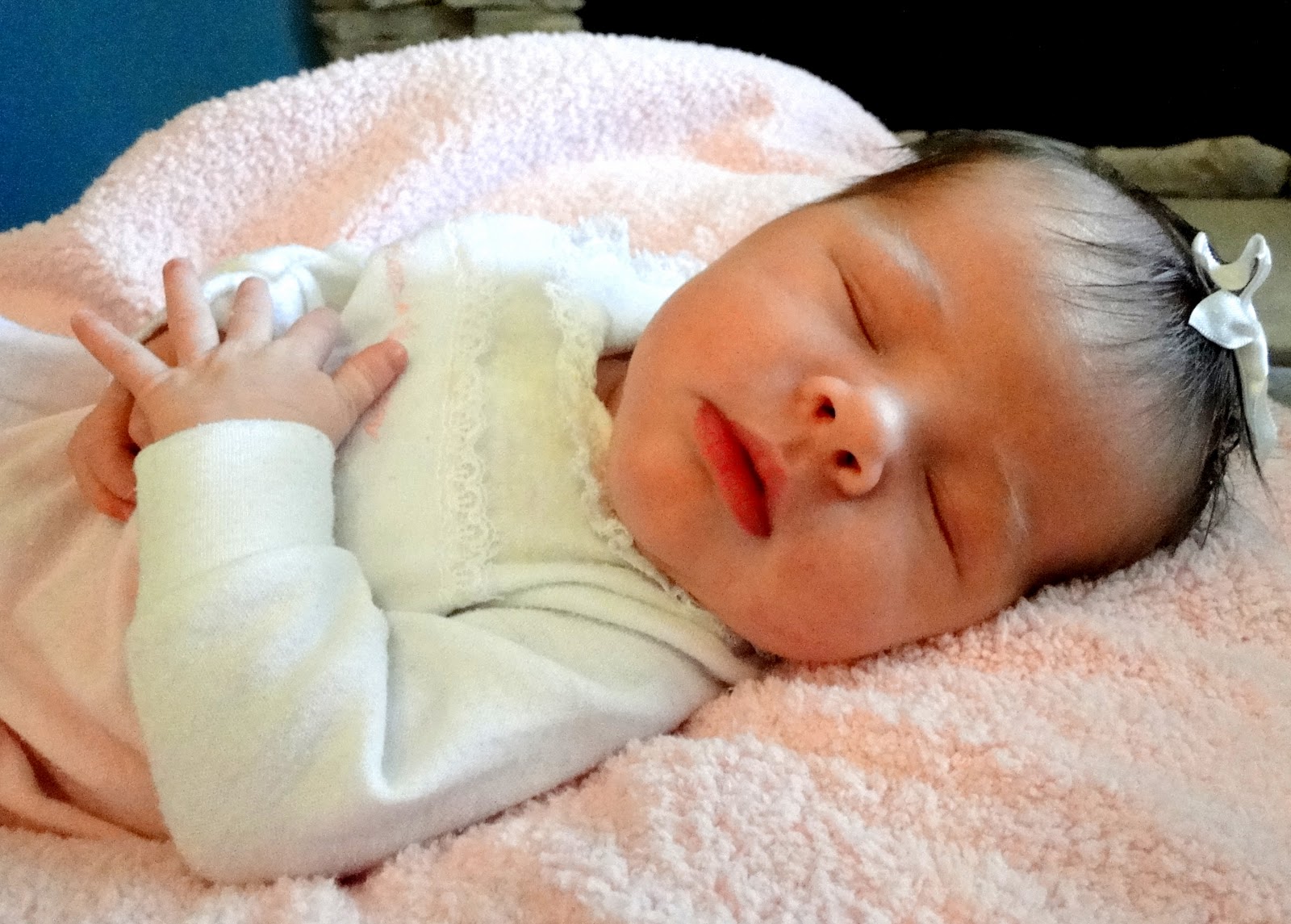 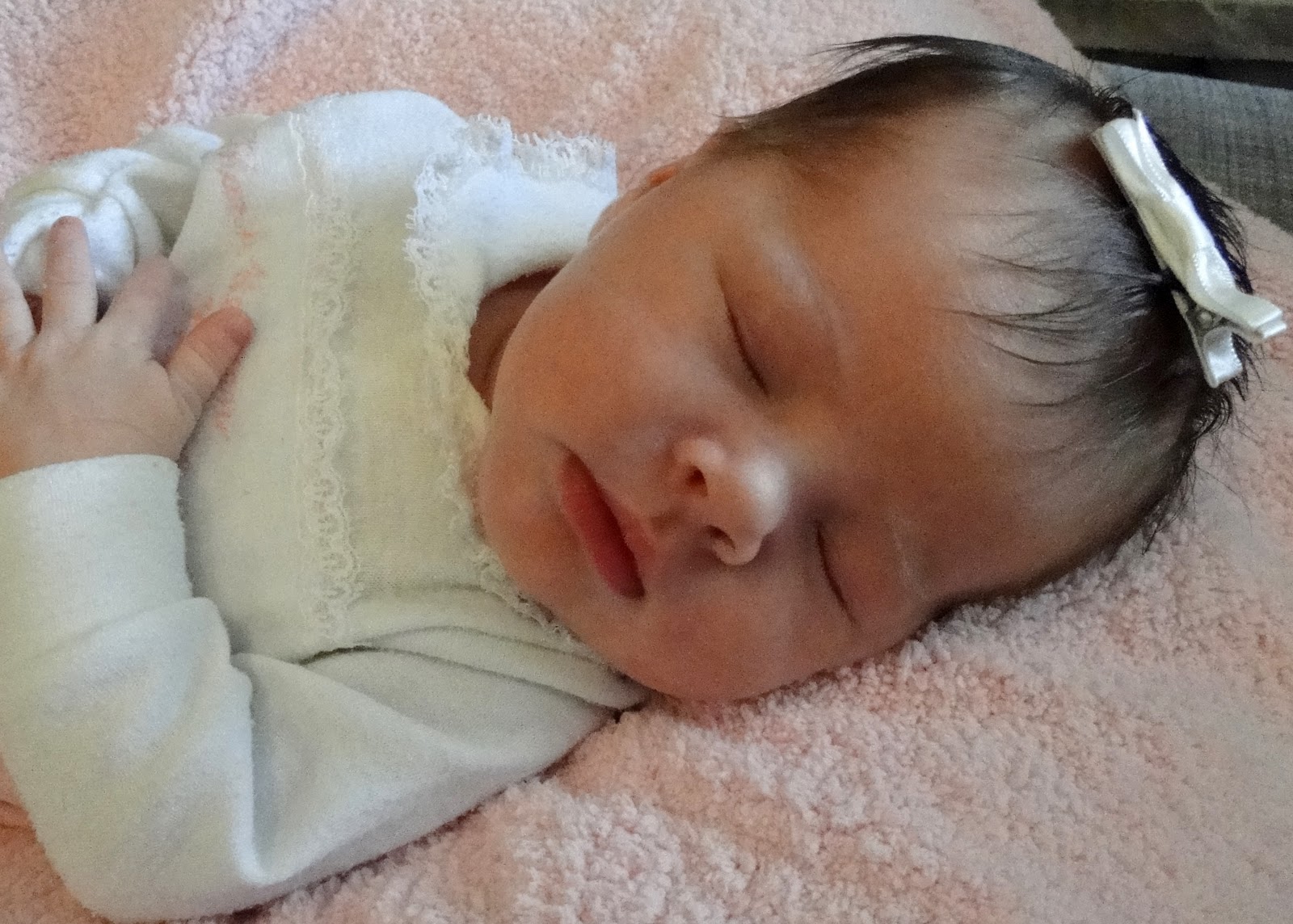 I’m so thankful for my daughter and am so excited for all the fun times to come! More than anything I’m thankful we have one of each because if something does happen and we aren’t able to have more children, like we want to, we will at least get to experience both sides of parenting. When Zach and I were early in our relationship and would talk about our dreams for the future we both said we’d like to have a boy first, then a girl, then another girl, and have the last baby be a boy (we’ve seen a lot of “babies” be spoiled rotten and felt like we’d be less likely to spoil a son if we ended with a boy!). We’re halfway there and so far have exactly what we’d always hoped for 🙂