A very busy 24th birthday for sure! Thursday Oct 30th we celebrated my birthday with our friends! Seth and Crissy couldn’t make it so Zach, Katie, Ashley and I all enjoyed dinner at Red Lobster. Since Katie has been our friend we’ve never done gift-giving but we decided to start that tradition this year.

Ashley got me two really cute maternity winter tops and Katie got me a gift card to Victoria’s Secret and a pregnant angel-girl (I don’t know their “official” name I just call them angel-girls haha)! 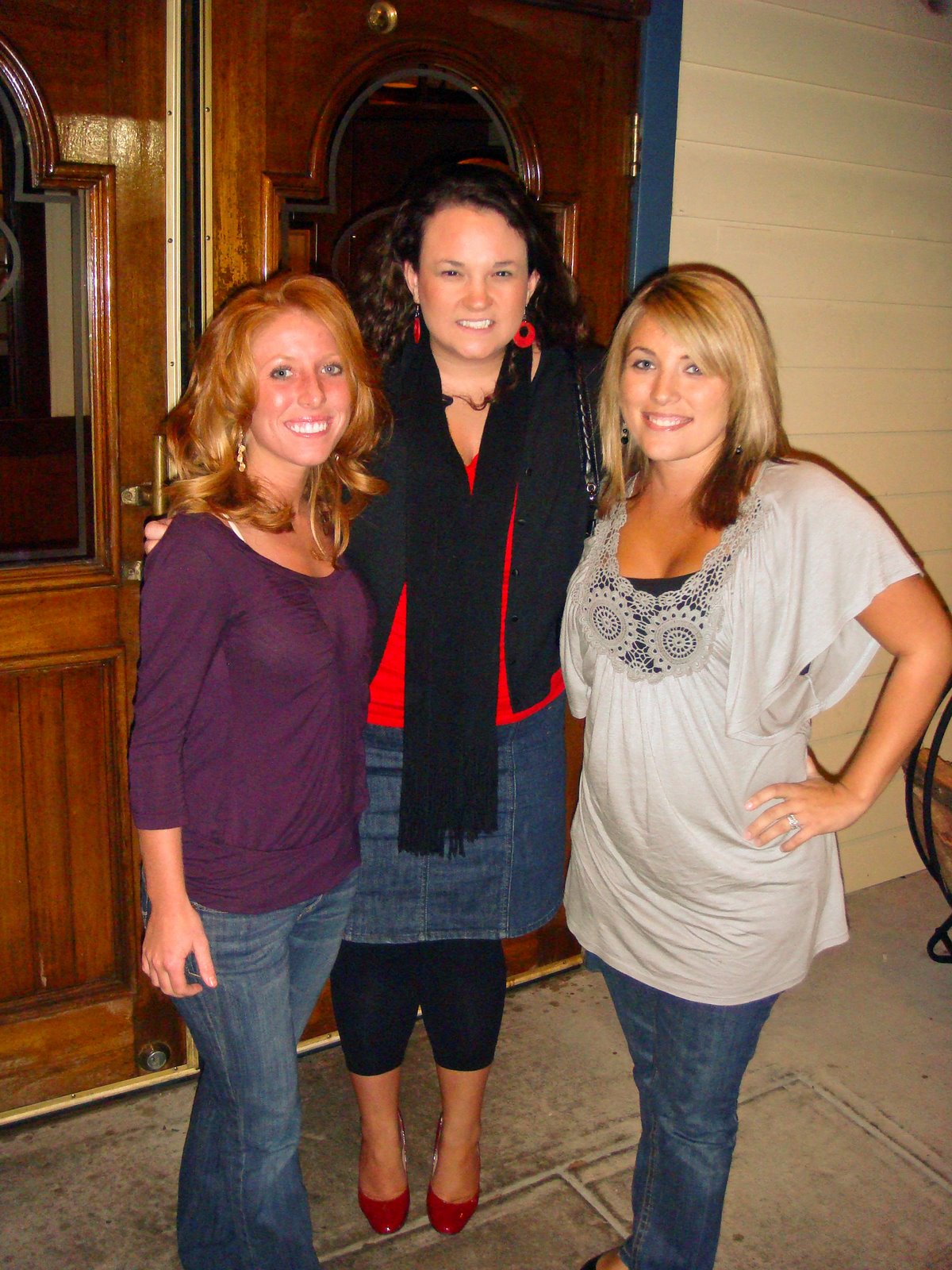 The last two Halloween’s we’ve dominated the Christian Student Center Halloween Party. Two years ago we were Nintendo Characters and last year Zach was Flavor Flave and Katie and I were “Cocoa” and “Butta.” Of course everyone was jealous of our awesome-ness and we think that’s why they didn’t have a Halloween Party this year. haha!

We made the best of it though and Zach, Katie, Zach West (who is basically a younger version of Zach Parker), and I headed out to a Corn-Fusing Corn Maze! It was so fun just playing around and doing something different. Zach really enjoyed having a guy around for a change and I think “little” Zach enjoyed it too! 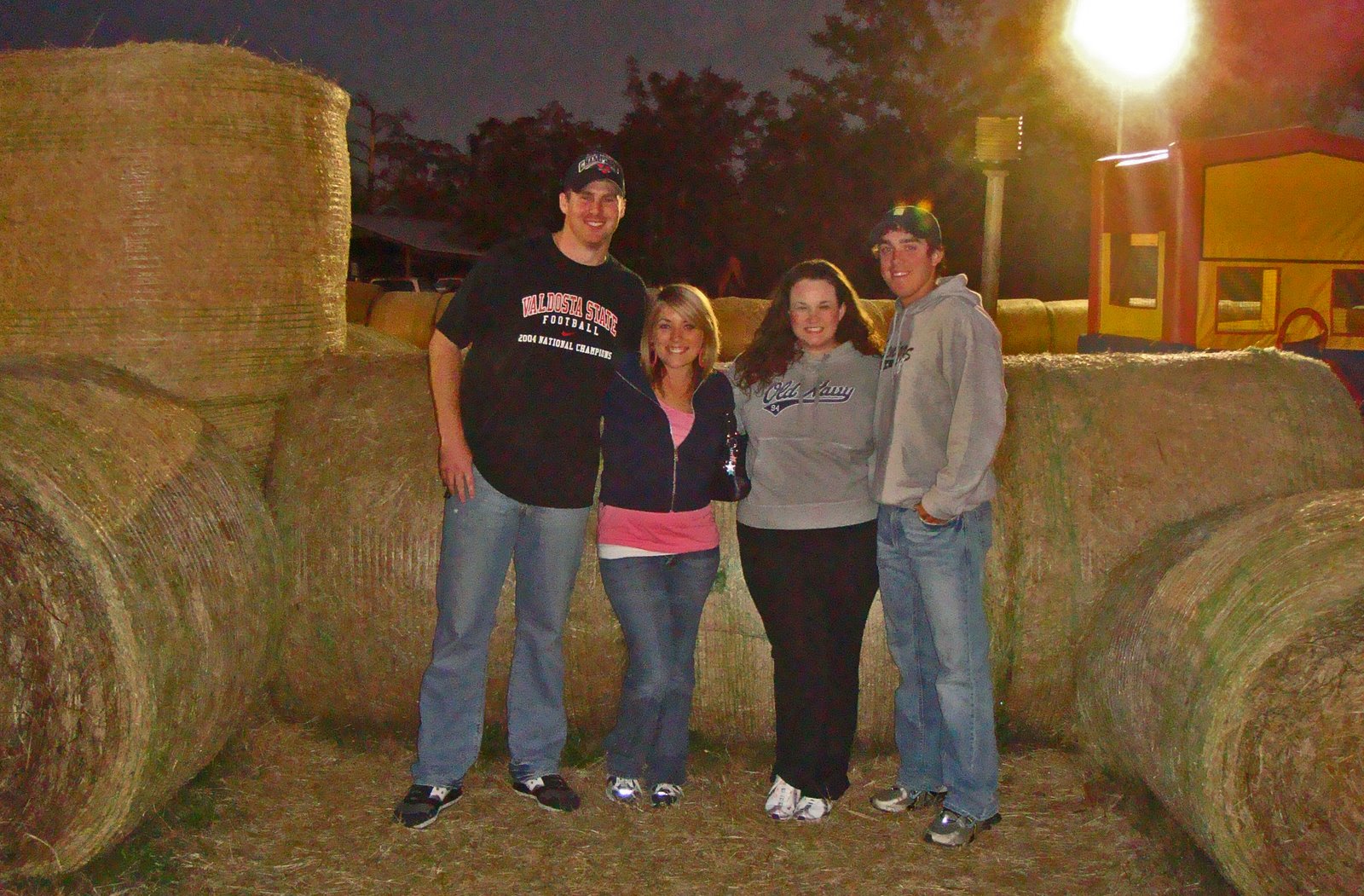 After a long Halloween night, Zach told me to sleep in on my birthday. When I woke up he made me his famous pancakes 🙂 So sweet! I don’t think I’ll ever make pancakes the rest of my life because his are seriously the best ever!

While I was getting ready for the day he came in the bathroom and had my open an early present…he got me the beautiful necklace and earring set that we had seen in California!!! I was surprised and excited because he did such a great job playing it off while we were there that he thought they weren’t worth the price! They are even prettier than I remember them being and they are so much different from most of my other jewelry 🙂


I also opened my card from Dad. Every year for as long as I can remember I’ve always given my dad a Wishlist and he gets me items from that for both my birthday and Christmas. This year when I sent him a birthday “idea” he wrote me back and told me he already had my birthday covered! I was shocked and really, really excited.


Then the card came. And it was just an envelope so I got nervous…I thought he’d just given me a check for sure which was disappointing because I was so excited to get a gift that HE picked out on his own!!! Ya know? So Zach told me to go ahead and open Dad’s card while he was making the pancakes because he didn’t want me to be upset all day just in case!


I was shocked, my eyes filled with tears, and a HUGE smile spread across my face when I opened the card and saw that he and Audrey (his wife) had gone the extra mile and gotten me a Prenatal Spa Day here in Valdosta!!! SO thoughtful! I was so impressed and it really meant a lot to me that they took the time, effort, and thought to get me such a sweet gift! 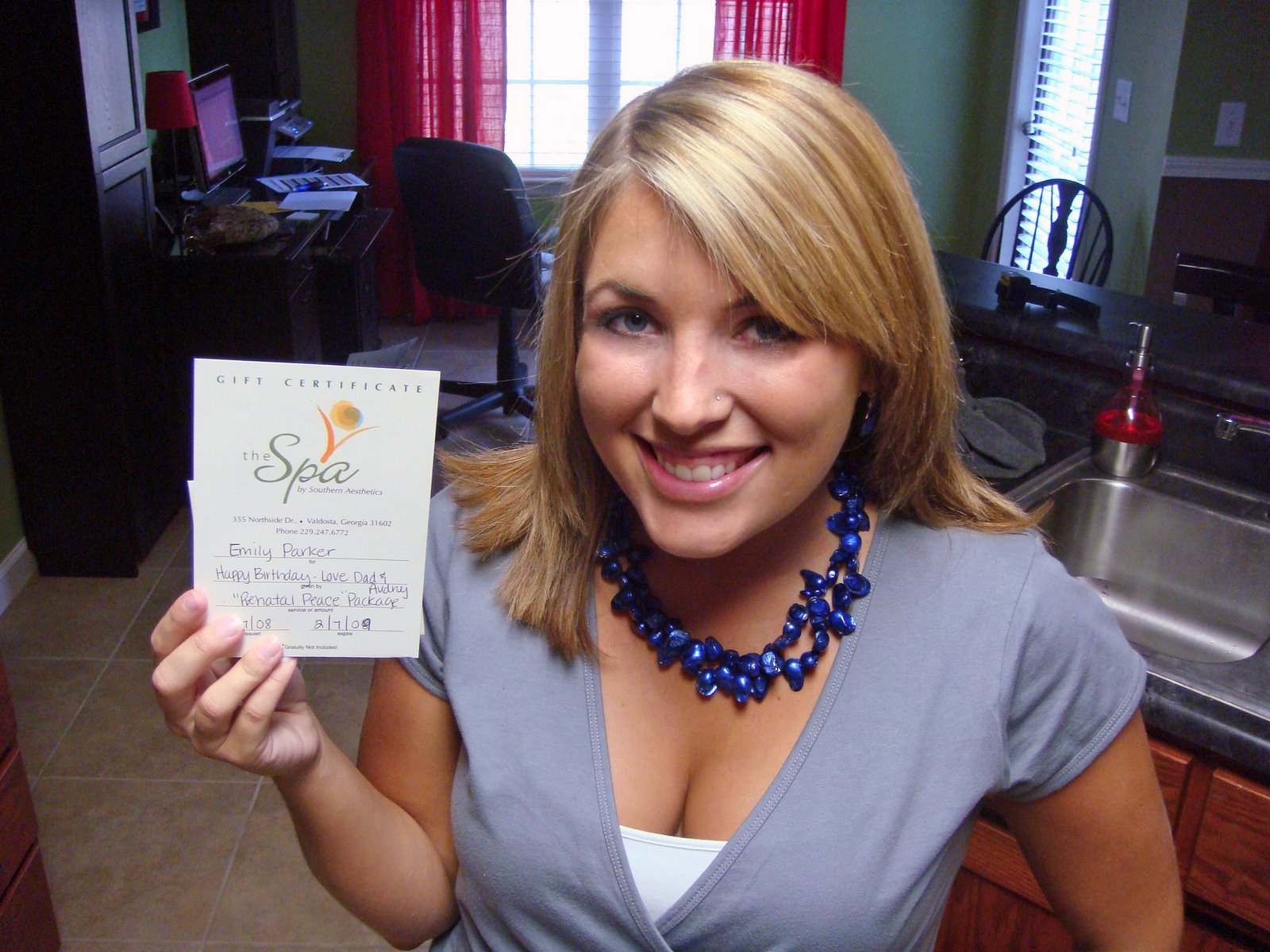 How often does a birthday fall on a Saturday? Of course it was UGA vs. UF weekend but my sweet husband DVRed the games and spent my fullll birthday with ME! It was so nice just the two of us taking our time without having to rush to be somewhere. We went and saw the movie Changeling. It was SO good! Then we got dressed up (as dressed up as I can with a baby belly) and went and ate at Charlie Tripper’s! It’s probably the nicest restaurant in town and even though we have gone there for three of my birthday’s now I like the tradtion as we never get to go any other time during the year! 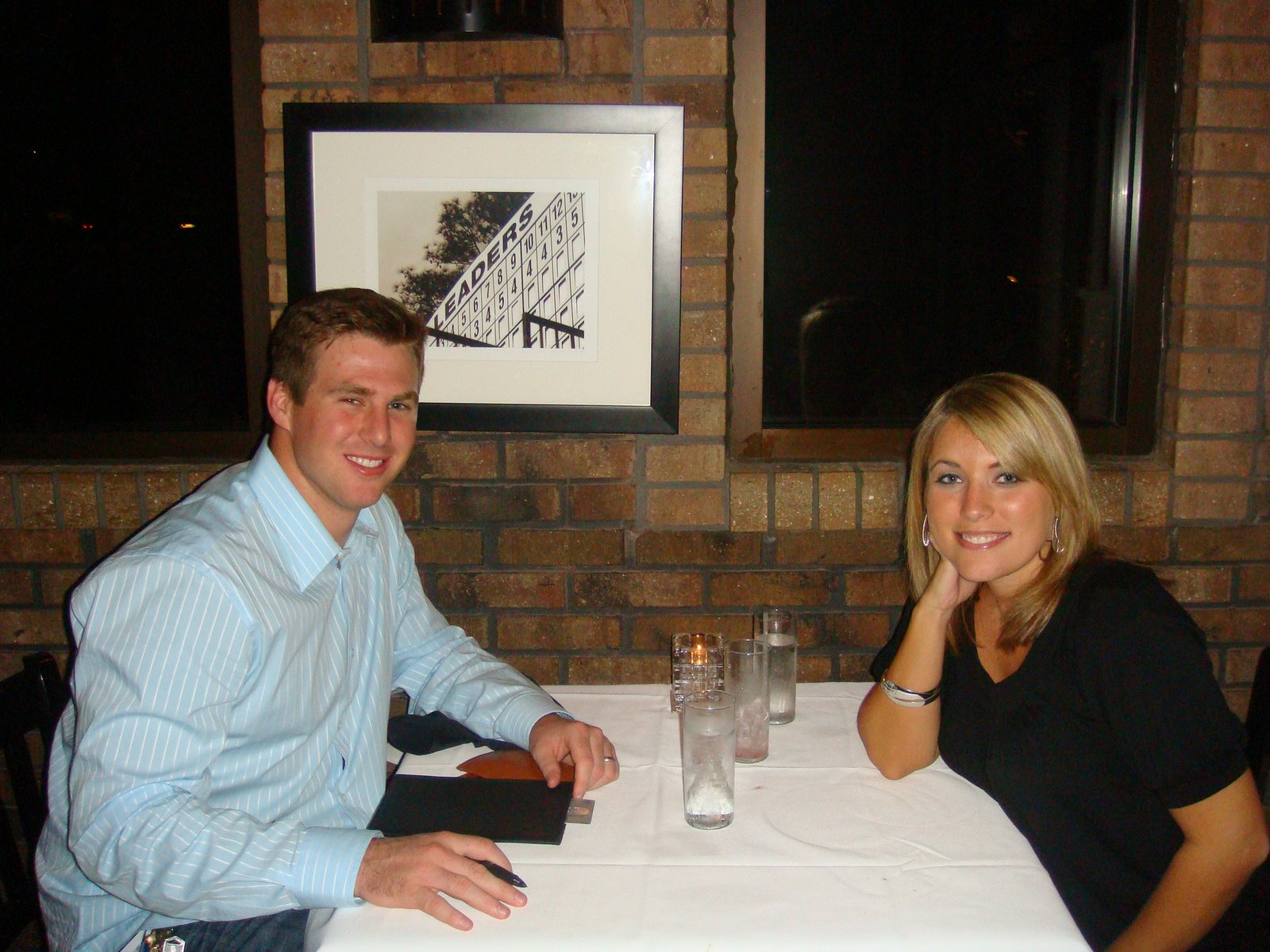 Once we got home it was cake and present time. I’ve been craving an ice cream cake from Dairy Queen but of course their freezers were broken so he got me a YUMMY cookie cake instead!!! 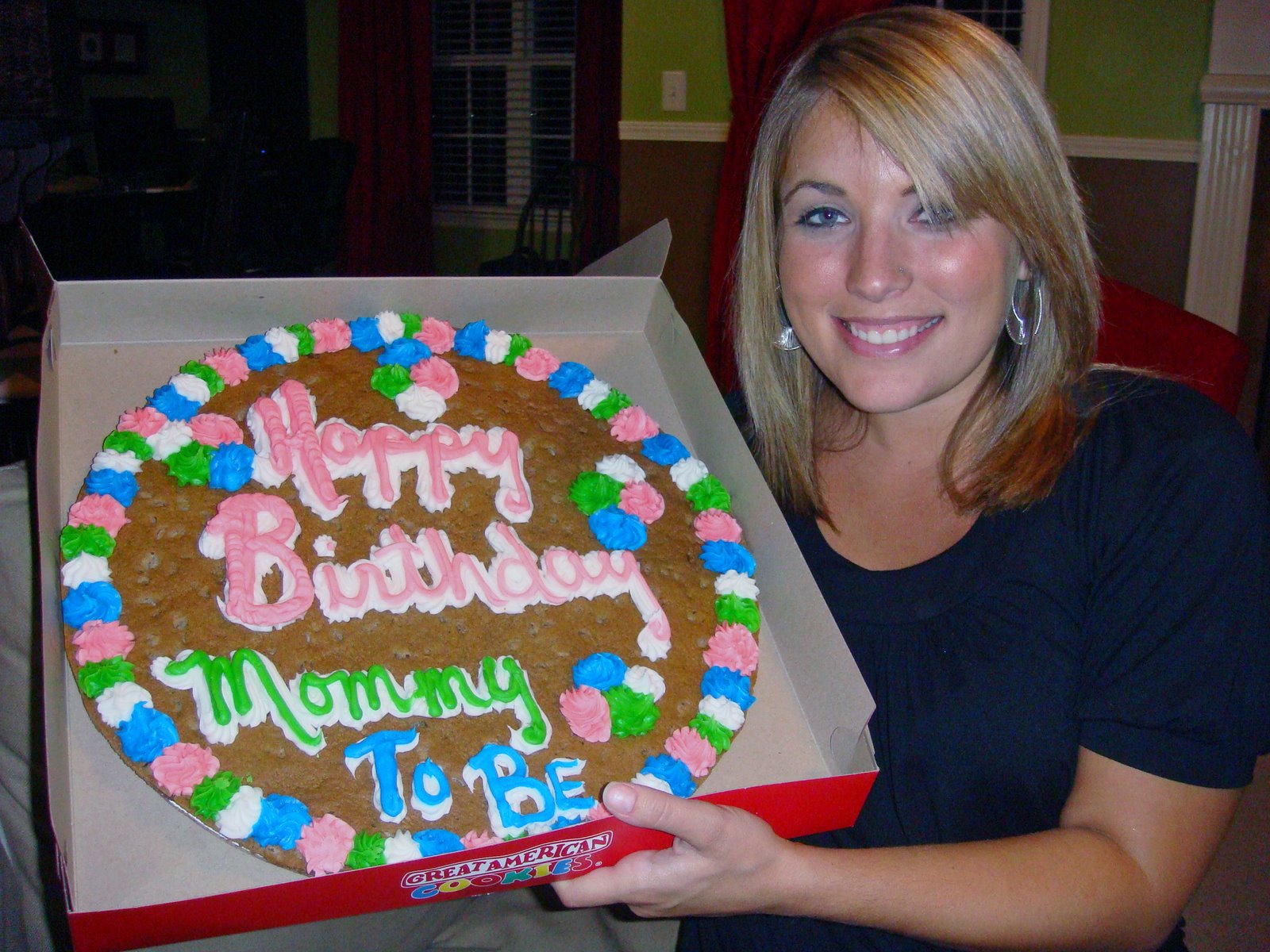 Zach has been saying how difficult this birthday has been to buy for since I’m pregnant. Mom did such an awesome job getting me maternity stuff from her that I don’t really need much more and so Zach really wanted to give me gifts that focused on me and not really the baby.

I guess he works well under “pressure” because he did AWESOME! I’ve wanted both a sapphire tennis bracelet and a big red purse for a couple of years now and he got both of them for me. While I’ve always been anti-bluetooth things…he got me one. At first I was thrown as to why but once he explained it, it makes total sense! He said this way when I’m juggling a baby in my arms I won’t have to juggle my phone too since I’ll probably either be calling him or my mom constantly for help with the baby!!! haha!

He felt a little bad because I had been so pumped about Dad’s gift and Zach got me a Spa Day too!!! It’s at a different spa though and it doesn’t expire as soon as Dad’s…and really I’m pumped about having two of them! I know Zach may not believe that but I really am as I’ve read so many great things about how having prenatal massages (and facials and mani/pedis) really helps the body prepare for delivery and can not only be relaxing but can make the whole labor process easier. Once this third trimester hits I’m sure I’ll put both of them to good use! It’s so sweet that both of the men in my life did something so thoughtful! 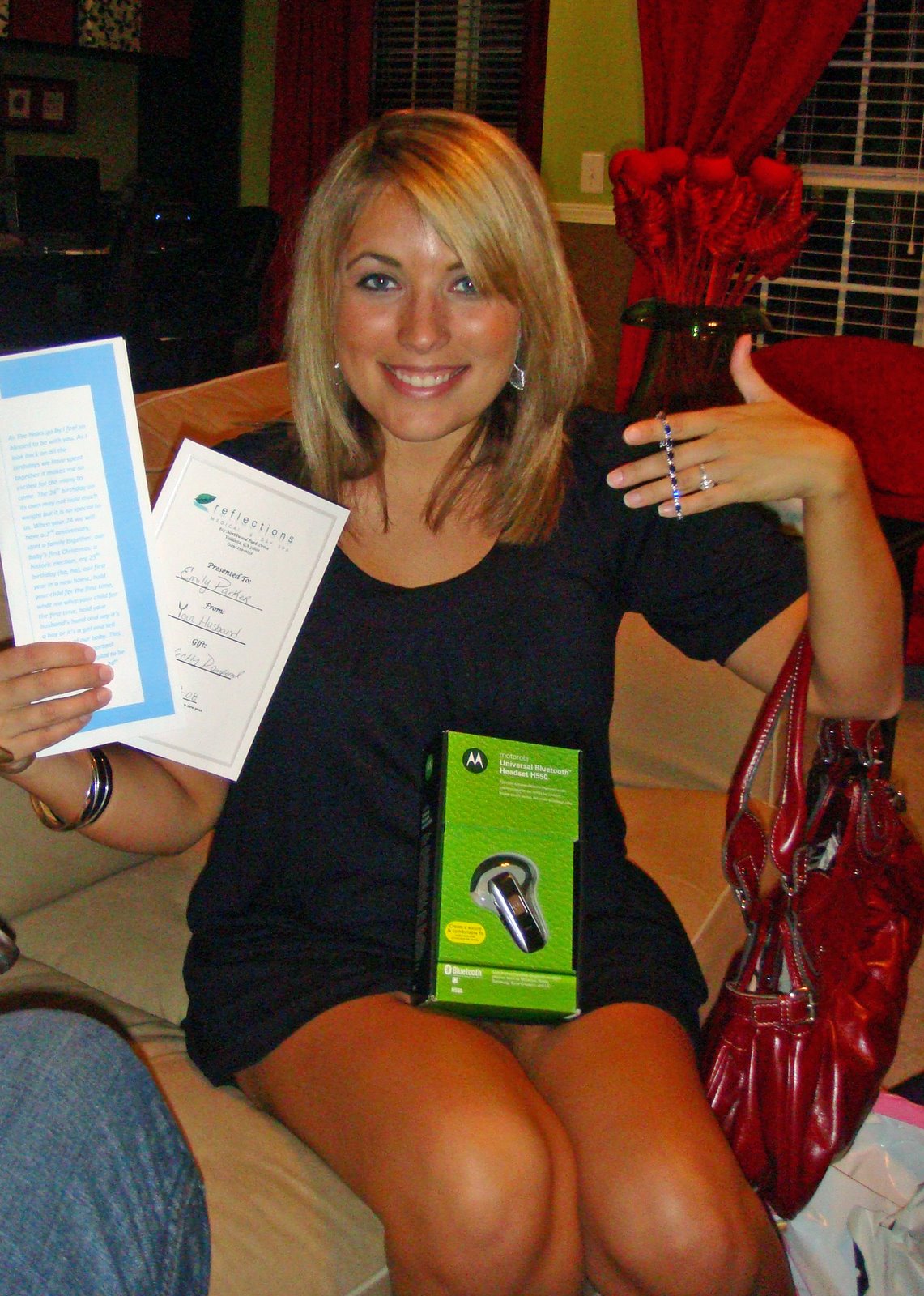 I loved everything he got for me! Even the card he made for me on the computer was sweet (with a gross picture of a baby being born on the inside…typical Zach). I was a little angry with him for going so overboard though. He should have kept a few of the gifts for Christmas! As I was in mid-sentence telling him that he did too much he walked out to the living room carrying a Coach Box!!!

I about died! He got me the Coach Babybag I’ve wanted too!!! 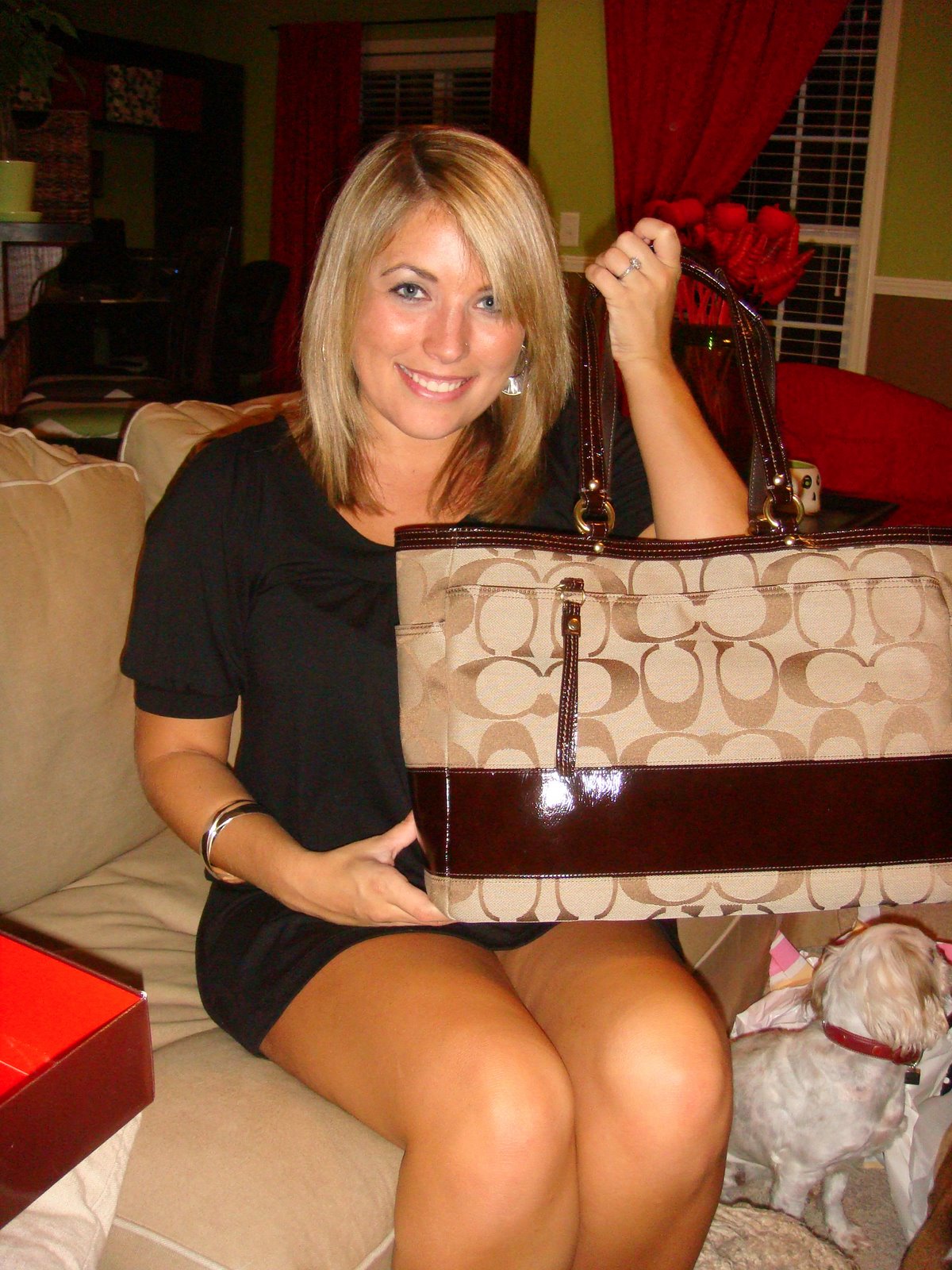 While part of me wanted to get depressed about turning 24, Zach made it impossible for me to even think about! He gave me an entire day all about me and pampered me with his love and with the best gifts ever! Plus since he went sooo far over the budget for my birthday…it means I’m excited to spoil him at Christmas!!! I can’t wait 🙂