When Kye was born my dad was living in Omaha, Nebraska so there was no way he could make it in time for the birth. This time Dad was planning to come down when the time came for Brittlynn’s arrival but he was in Mississippi hunting! We talked about it though and really it was better for him to wait to come so we could actually spend time together. It’d be kinda silly for him to drive down (he lives north of Atlanta now) just for the big announcement then I’d be in the hospital so he wouldn’t really get to see me! It meant so SO much to me that he wanted to come down to meet her and visit with us.

The whole second baby thing can be hurtful. People really tend not to care as much about the second born baby and I don’t understand that. She’s still just as much a new baby as Kye was! Who cares that she’s not our first?!?! Less people were there for the announcement at her birth, less came to the hospital to visit, less brought food, less came to the house to visit, less offered to help, etc etc etc. It did sting but it also made us appreciate the people who DID make a big deal out of her arrival!!! I personally never want her to feel less special just because she’s the second baby so we try hard to make sure she’s showered with love and attention 🙂

Dad came down the Wednesday after we got home (same day as Brittlynn’s dr appointment). It worked out well because Zach had to work and that way I wouldn’t be alone with both kids, Kye had school that morning and Mrs. Charlotte stayed and helped me before nap-time. He arrived right around 1 and stopped and got Zaxby’s for us for lunch! Score 🙂 I was actually nursing when he got there and he was locked out and had to wait for me to finish! Oops! Kye was napping so Dad was able to get some quality Brittlynn time in before he woke up. 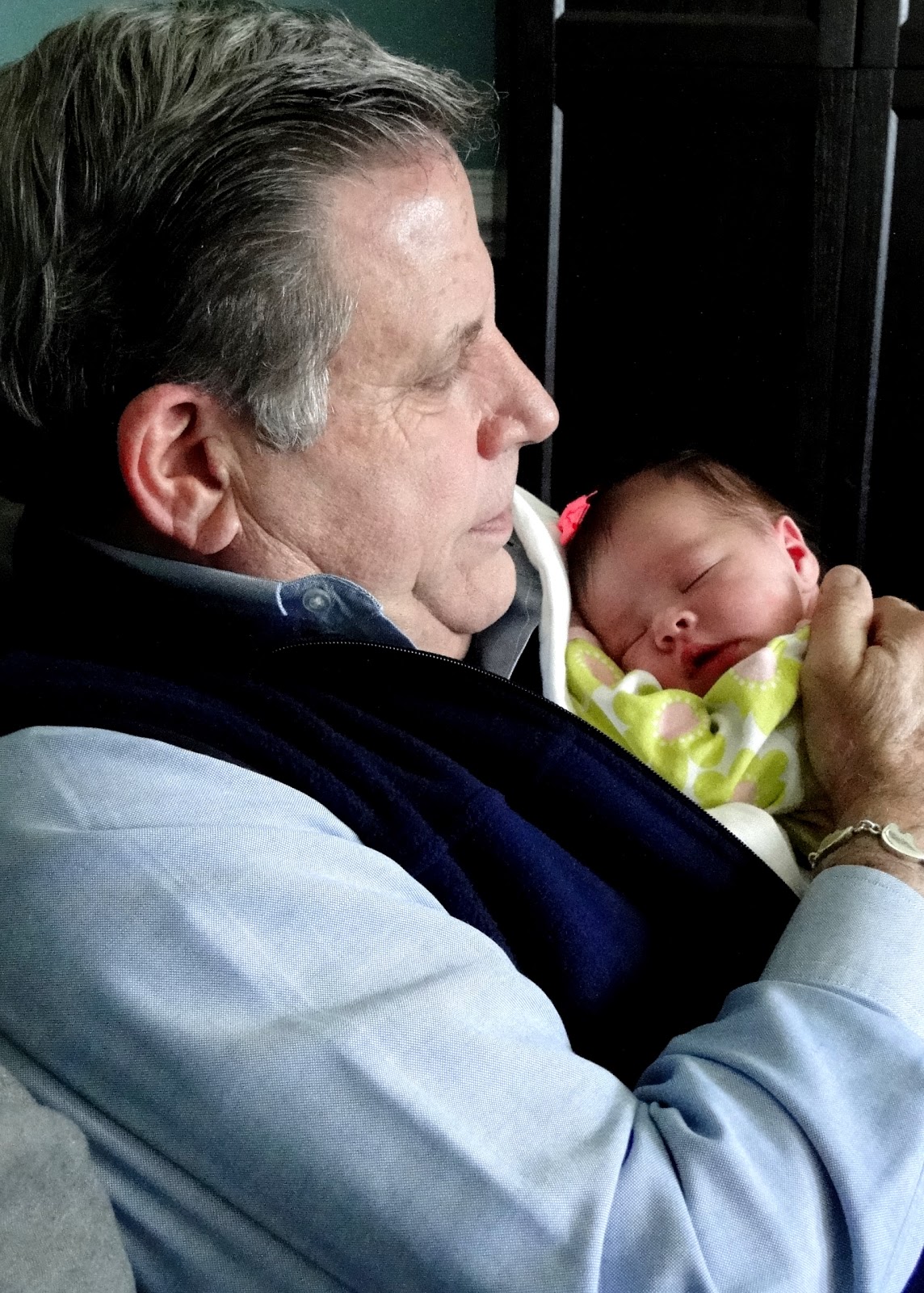 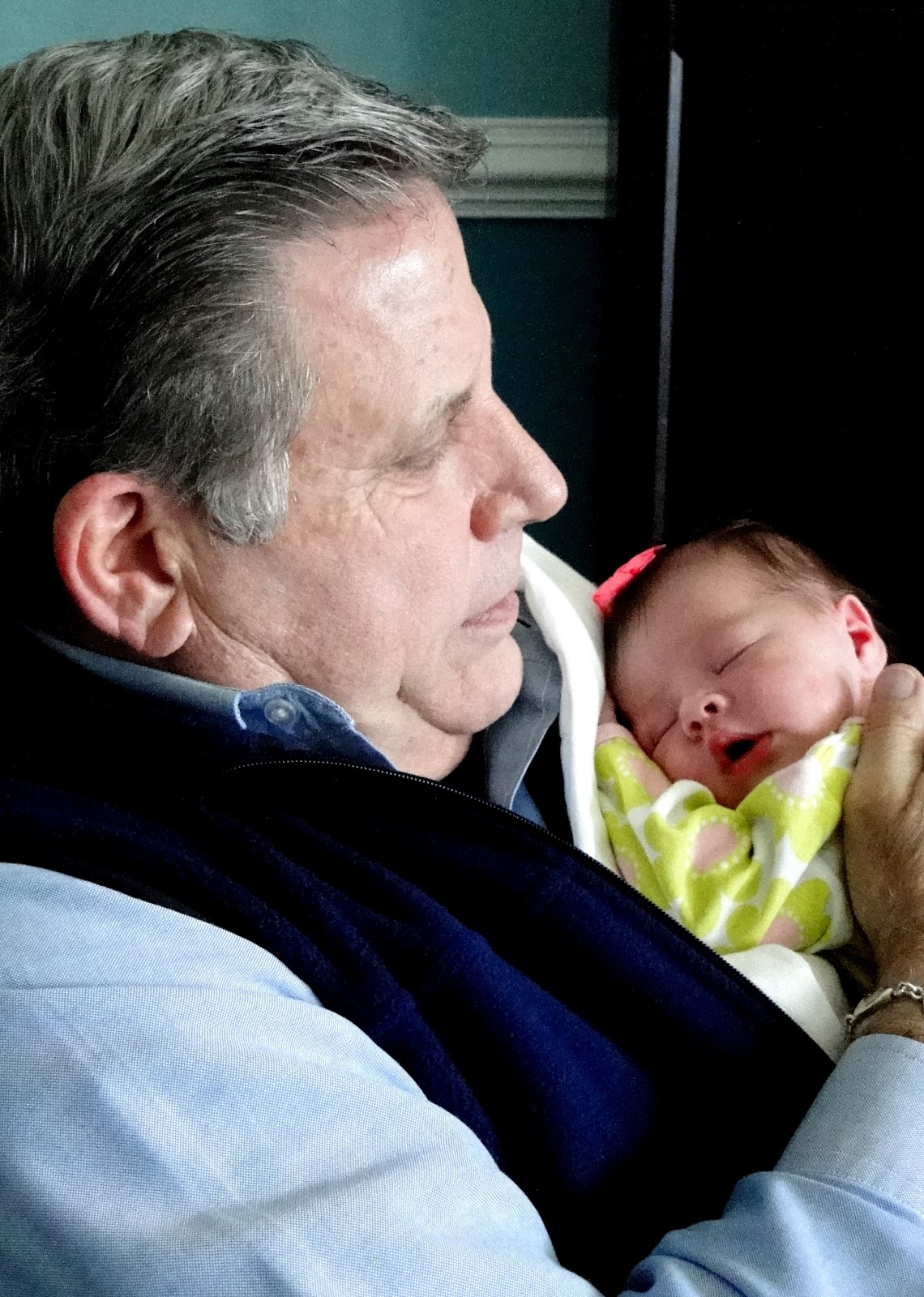 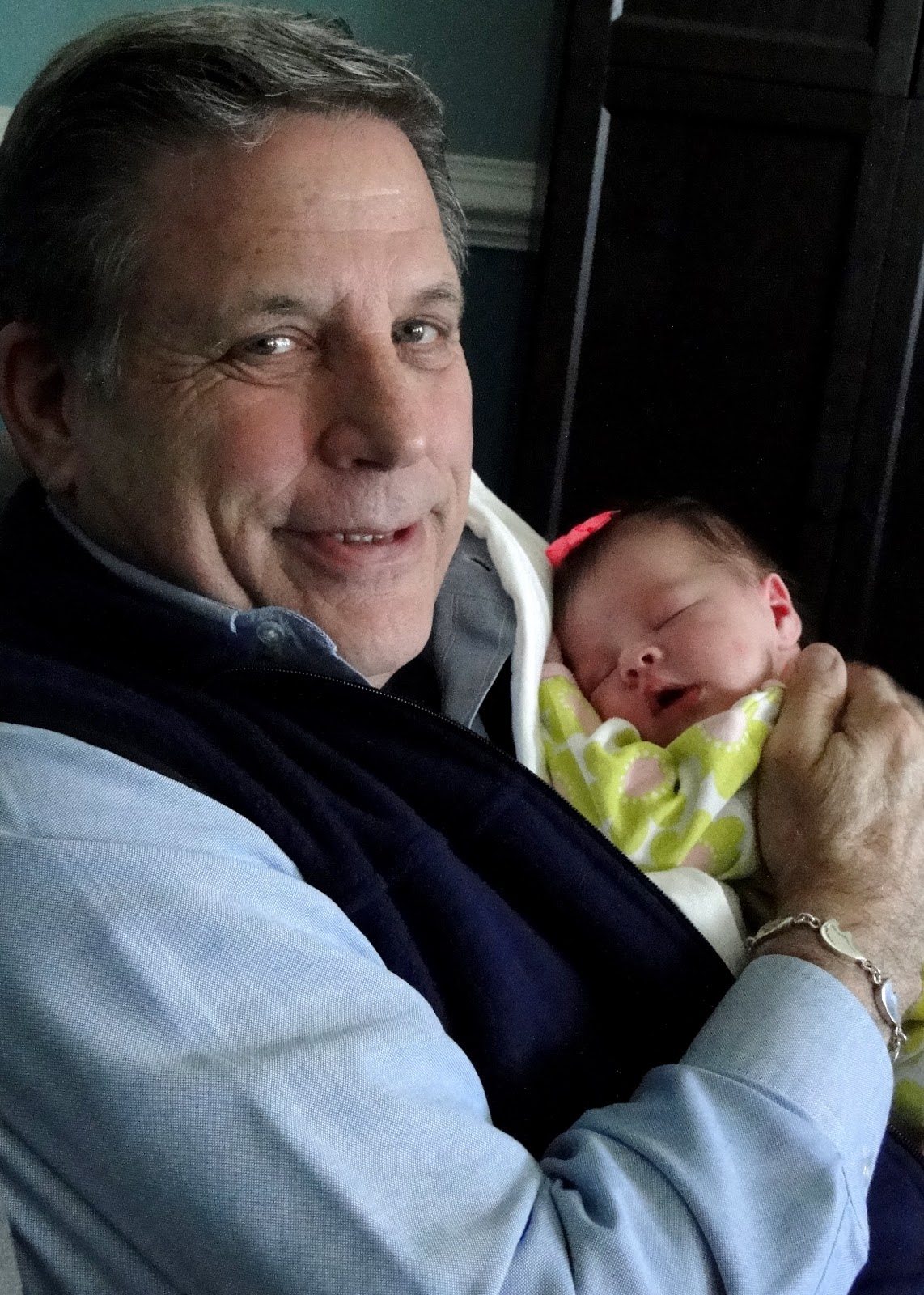 When Kye got up Dad was in the kitchen so I went and got Kye to go potty and such before he saw Dad. I hadn’t told him about the visit (we don’t tell Kye much in advance…you don’t want to get him amped up then have something happen where the plans fall through and have him be upset!) and when he was going potty I told him to guess who was there to see him. Of course he went through the regular list (Gramma, G-Mama, Jordan, Casey) and I told him that it was someone he’d never be able to guess. I said I’d give him a hint and told him it was someone he went fishing with. RIGHT away he said “Grandpa!!!” I swear the kid has an AWESOME memory! He hadn’t seen Dad since May!!! I couldn’t believe he remembered…when I told Dad he said “of course he remembered, no one forgets their first time fishing (you can read about Kye’s first time here).” It made me feel good that Kye remembered him though, as he doesn’t see him or my brother very often and sometimes it stinks that he knows ALL of Zach’s family but is really only close to my mom, ya know?

Zach got home soon after Kye got up so we all visited for the afternoon and Dad got us Smokin’ Pig for dinner. We were able to eat together while Brittlynn slept and it was a nice visit. Kye enjoyed seeing all the pictures on Grandpa’s phone (I swear ALL you I Phone people are ADDICTED! Everyone I know who has one is obsessed with it, even my 65 year old father haha I don’t want Zach or I to get one…). 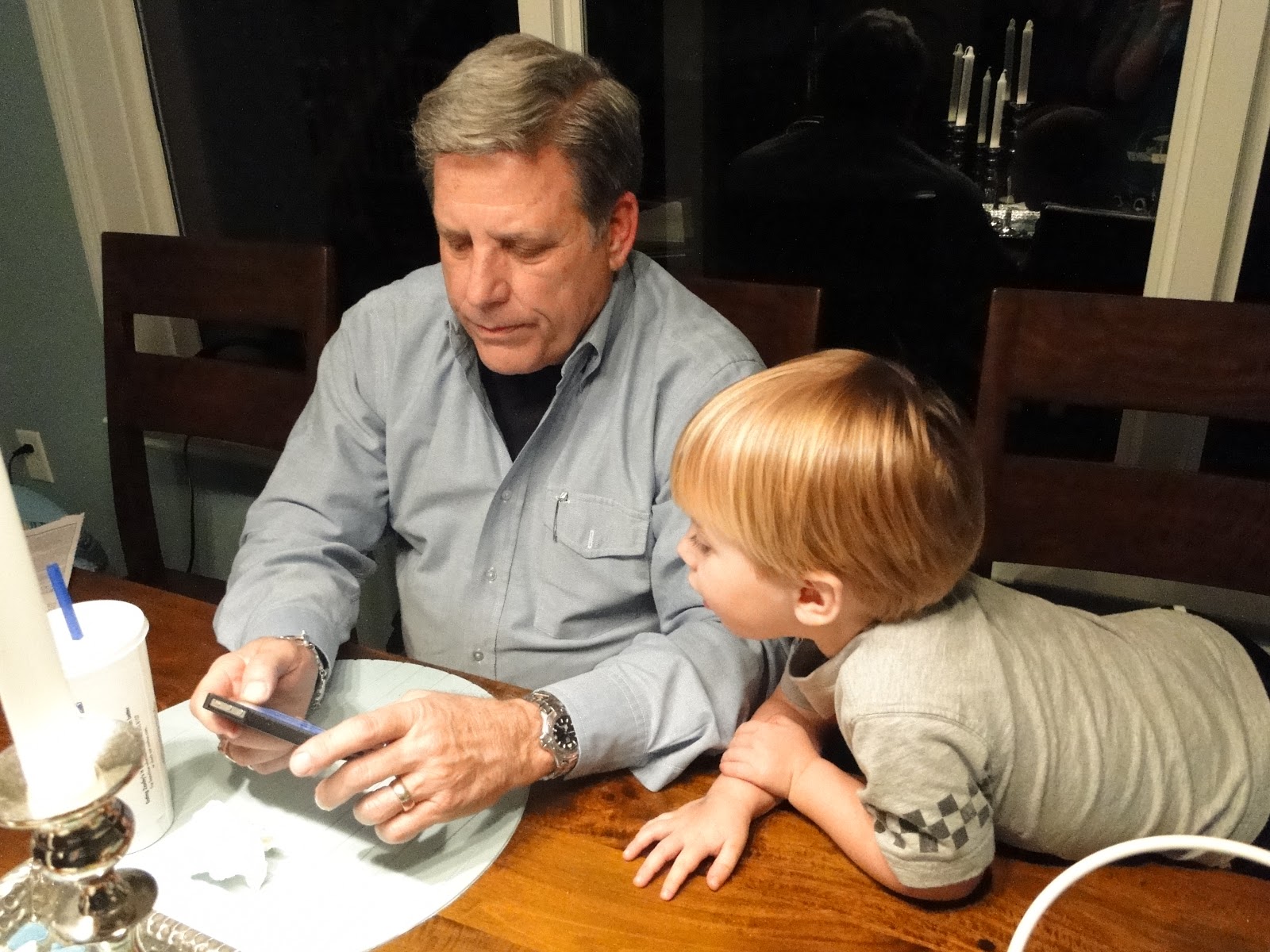 Had to get a pic of us together 🙂 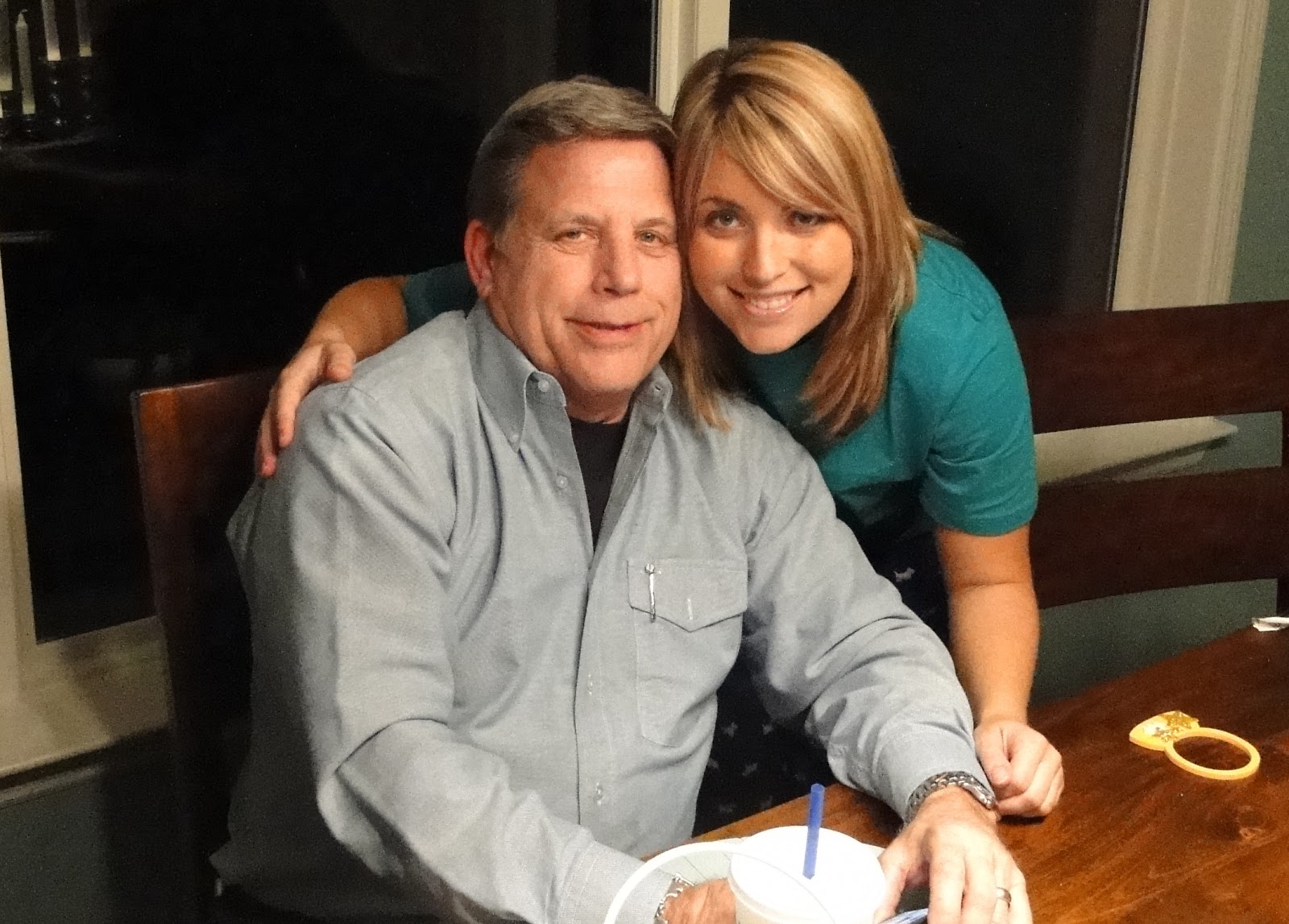 Britt with the bear he brought her (he got Kye a BIG blue one when he was born but he said he couldn’t find a pink one for her, but this one is super cuddly and soft) 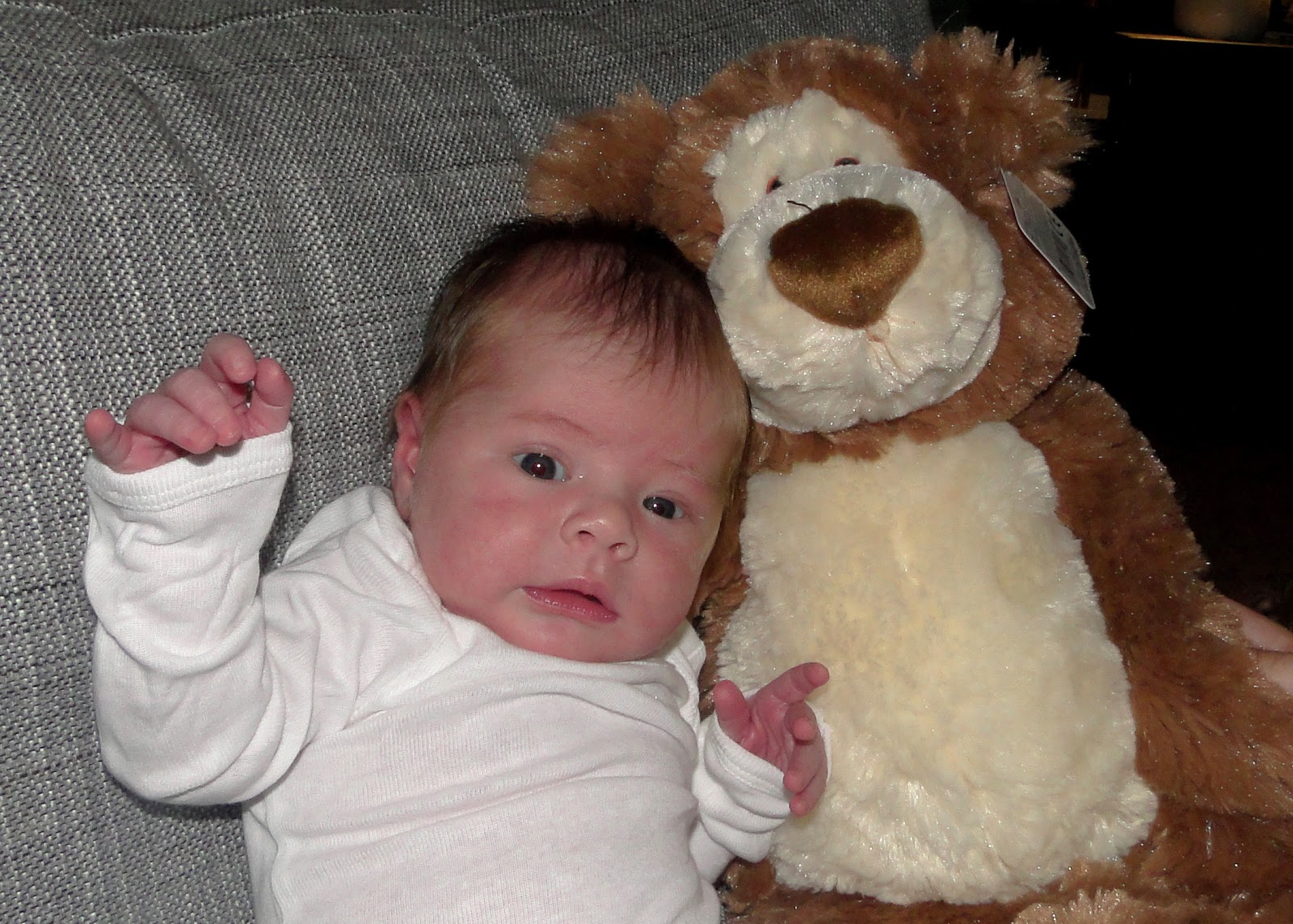 On Thursday we had muffins for breakfast. It was funny because Zach gave Kye one muffin then he came back and Kye had like 4 on his plate. He looked at Zach and said “Grandpa said I can have all of them.” I think he has Dad figured out 😉 Zach headed out to work and I told Dad I needed him to play with Kye so I could shower…the break was wonderful and Kye had a BLAST with Grandpa. They played with his telephone and up in the playroom with all of his toys. It’s funny how things change when you become a parent. Sure, I still enjoy spending time with my mom and dad but now, more than anything else, I want my children to spend time with them. It made me so happy that Kye had such a fun time with Dad!

Another thing that was cute to me was how Dad kept asking if I wanted him to go in Brittlynn’s room when she was crying. He even said “I can go drive around with her in the car if you need me to.” Mom and Dad both hated to hear me cry as a baby and did all the tricks you see in movies to get me to be quiet (I had colic so I cried a LOT). It was precious to me to see how much it bothered Dad when she cried. It’s just cute to see a man get that way, ya know? I guess Zach and I just don’t have that same instinct, it bothers me to hear her cry only because it physically hurts (when you nurse your milk will let down when a baby cries).

Dad ran and got us Chickfila for lunch (he hooked us UP with food, so great! Between him and our moms we ate pretty well…it was SO nice of our parents to step up with the food as cooking, even heating up the frozen meals, wasn’t an option that first week or so) then hit the road. I did manage to snap a picture of him with both of my children before he left though! 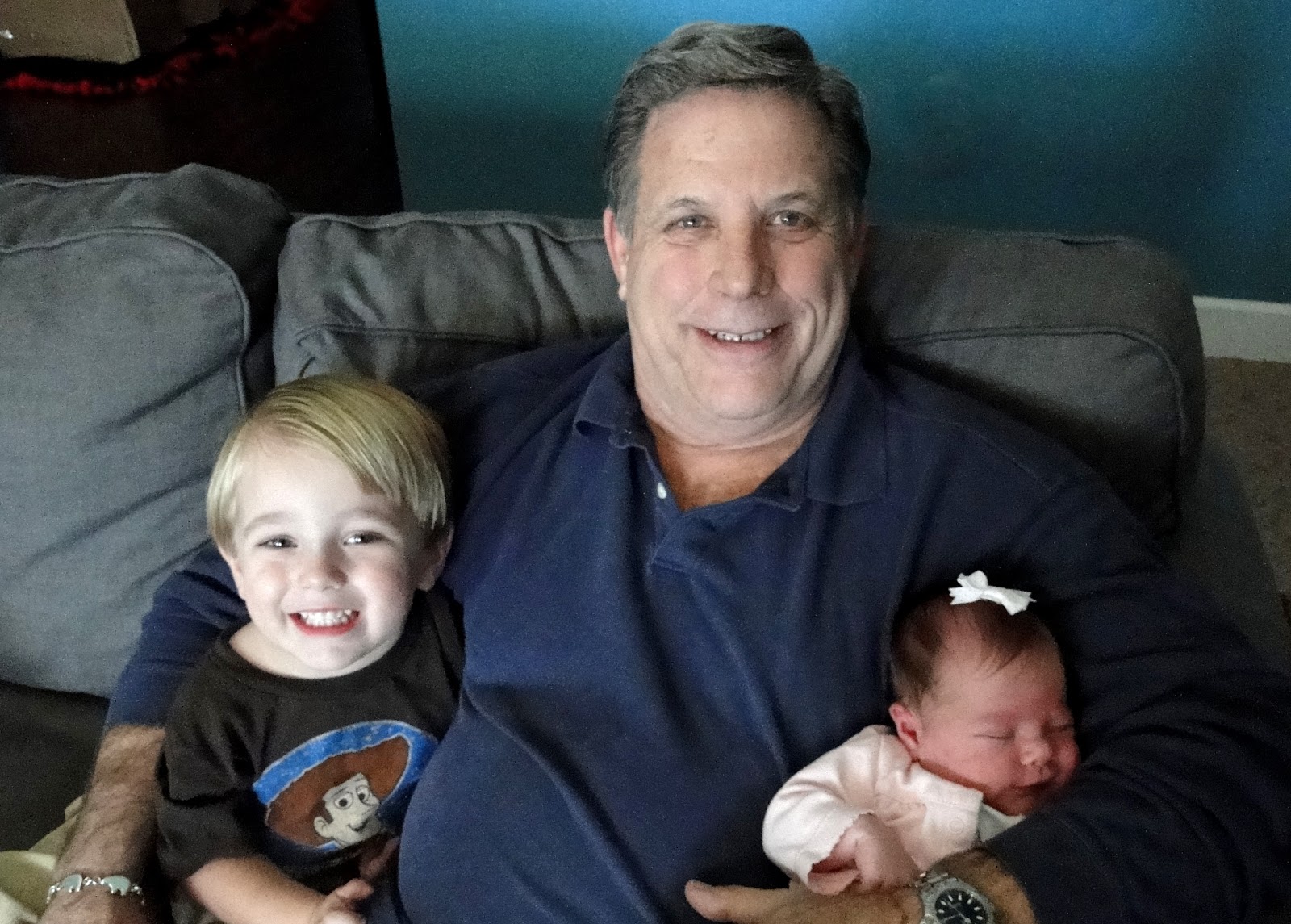 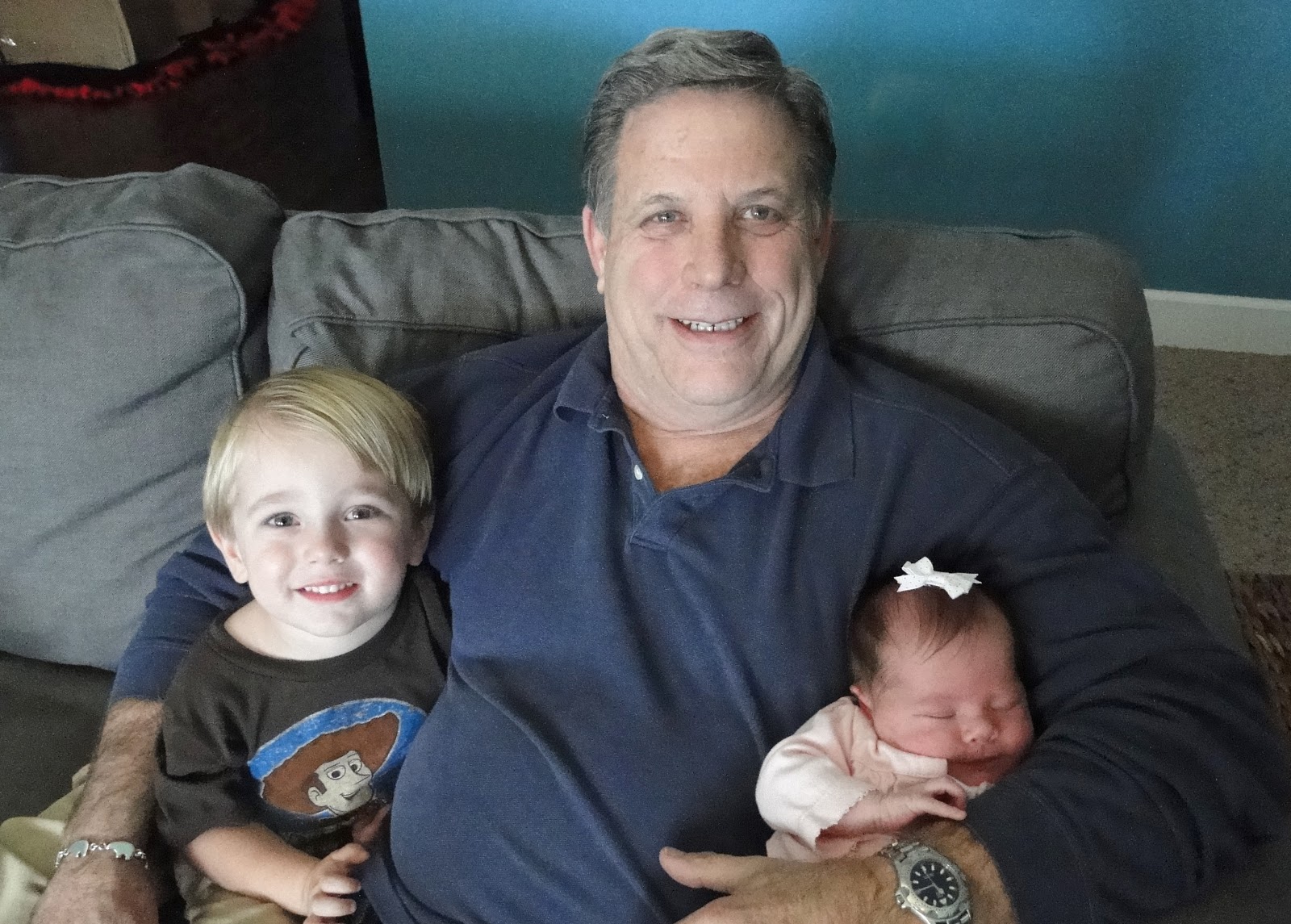 It was a short, but sweet, visit and I’m glad he was able to come down to meet Brittlynn! Even more so though I’m thankful for the time he spent with Kye. Now that we aren’t driving to Melbourne as often, since Mom lives right down the street, I’m hoping we’ll be making more trips up to visit him and Audrey. Hopefully for another fishing trip soon (especially now that I know it made such an impression on Kye) and so Audrey can meet Brittlynn too!