Every year we like to go to at least one FSU game. Zach and I are both Seminole fans (Zach actually watches the games though haha). Even though Zach is a big fan, he doesn’t actually enjoy attending games all that much. He prefers to watch them at home on tv! We enjoy the experience of being there on occasion though and I especially like making it a family event. I had thought about taking Britt with us to a game but Tallahassee is about an hour and a half away from our house and the games are pretty long so it would either mess up her nap or her bedtime, don’t really want to mess up either of those!

When we realized there was a home game the same day as Morgan’s wedding we decided to go ahead and get tickets. It all worked out great! Even though Britt was unable to come along, we decided we’d take the kids to a VSU game later in the season 🙂 Close to home, smaller crowds, much easier with a toddler!

We left the wedding and got to Tallahassee with just enough time to park and get into the stadium! We actually bought this deal they had going on where we got four tickets, four sodas, four hot dogs, and a coupon for the bookstore in a package that was cheaper than if we’d used StubHub and just bought three tickets. The seats weren’t stellar but I prefer to be further up when we have Kye with us. Less people means more space for us to spread out and be comfortable! 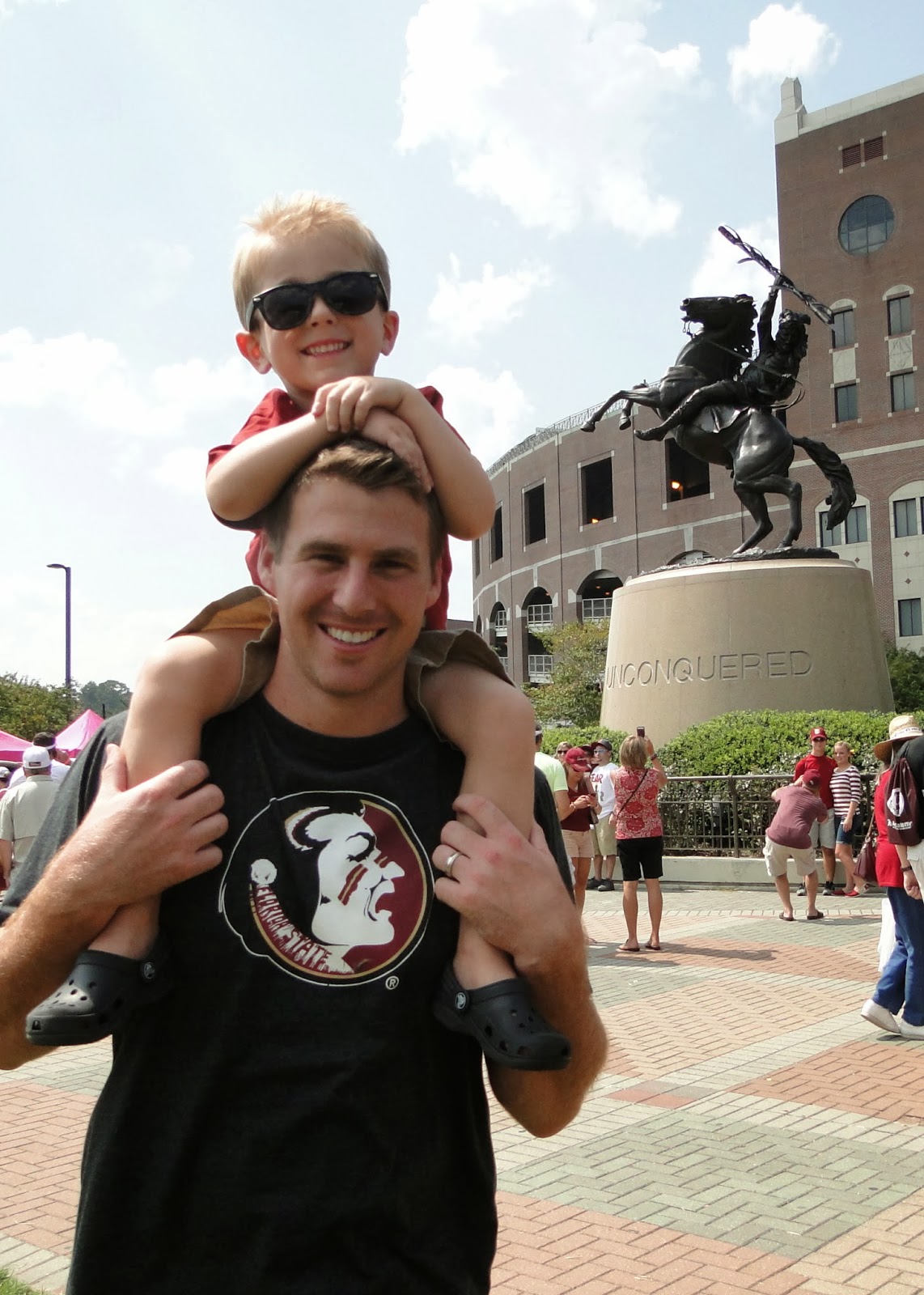 Zach went to get our vouchers for the food at Will Call so Kye and I checked out the bookstore. It was a MAD house in there so we found a spot and just sat and people watched. And Kye showed me things he’d like for Christmas 😉 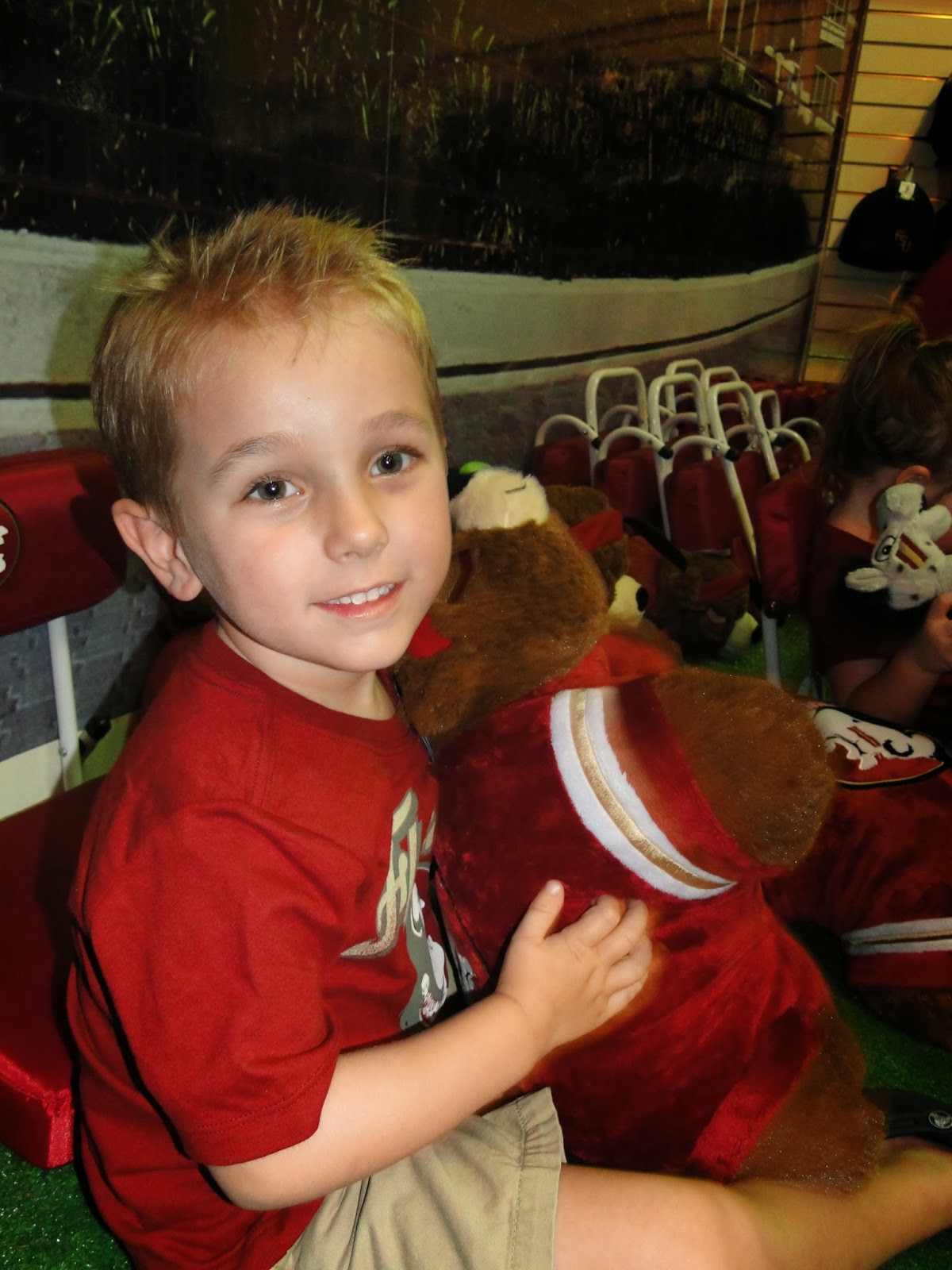 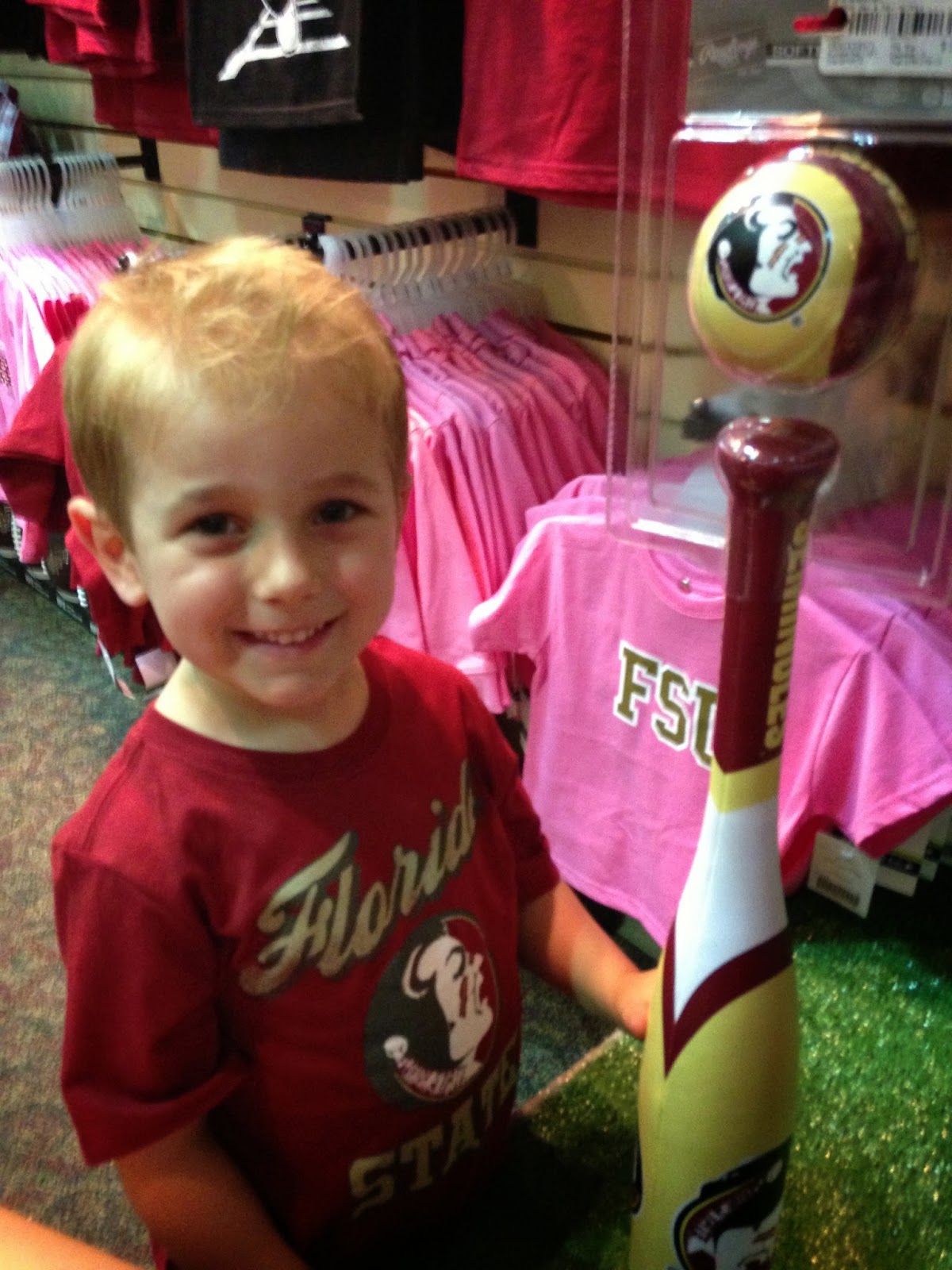 I know FSU is doing really well this season which is kinda nerve-racking! We aren’t used to having such a winning season and every game is so important. It’s neat to see FSU in the spotlight more. Around here we see more high school football apparel as well as UGA stuff than we do FSU. Just today I was at the mall and saw FSU merchandise in the display window at a store for the first time since I’ve lived here! It’s interesting to me how people change up their favorite team based on whoever is doing well. We are Seminoles…in winning seasons and in losing ones and I don’t see that changing anytime soon!!! 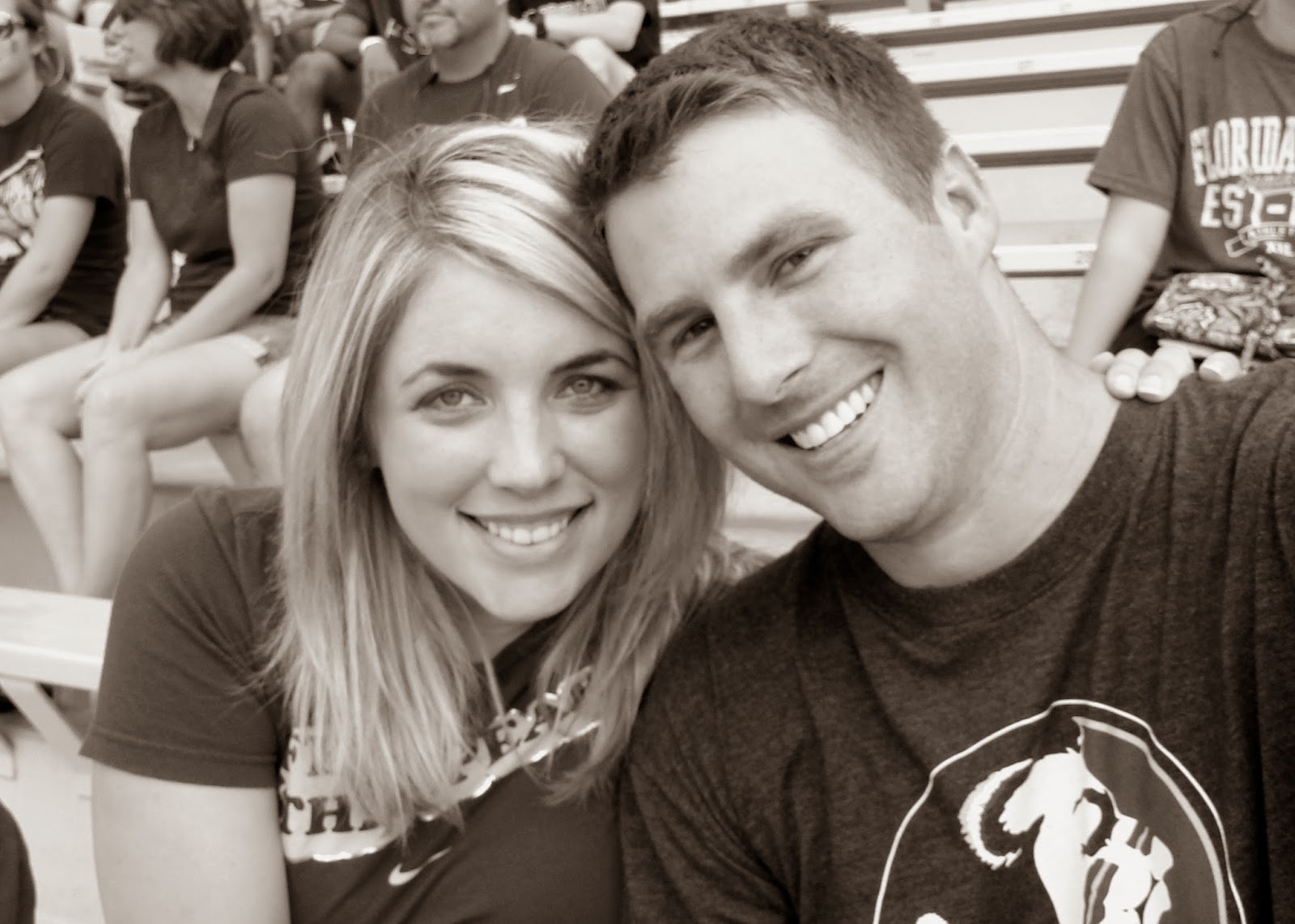 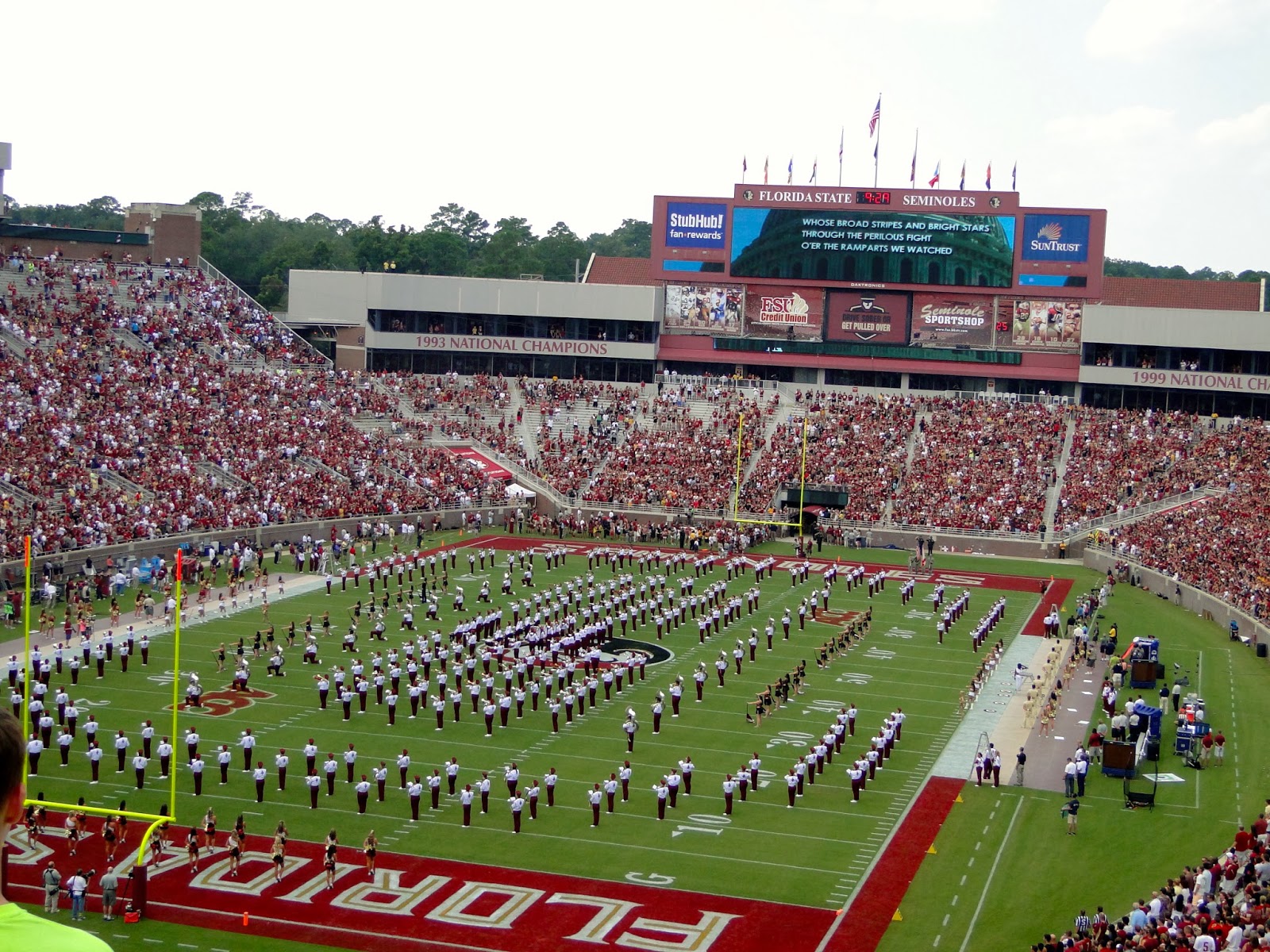 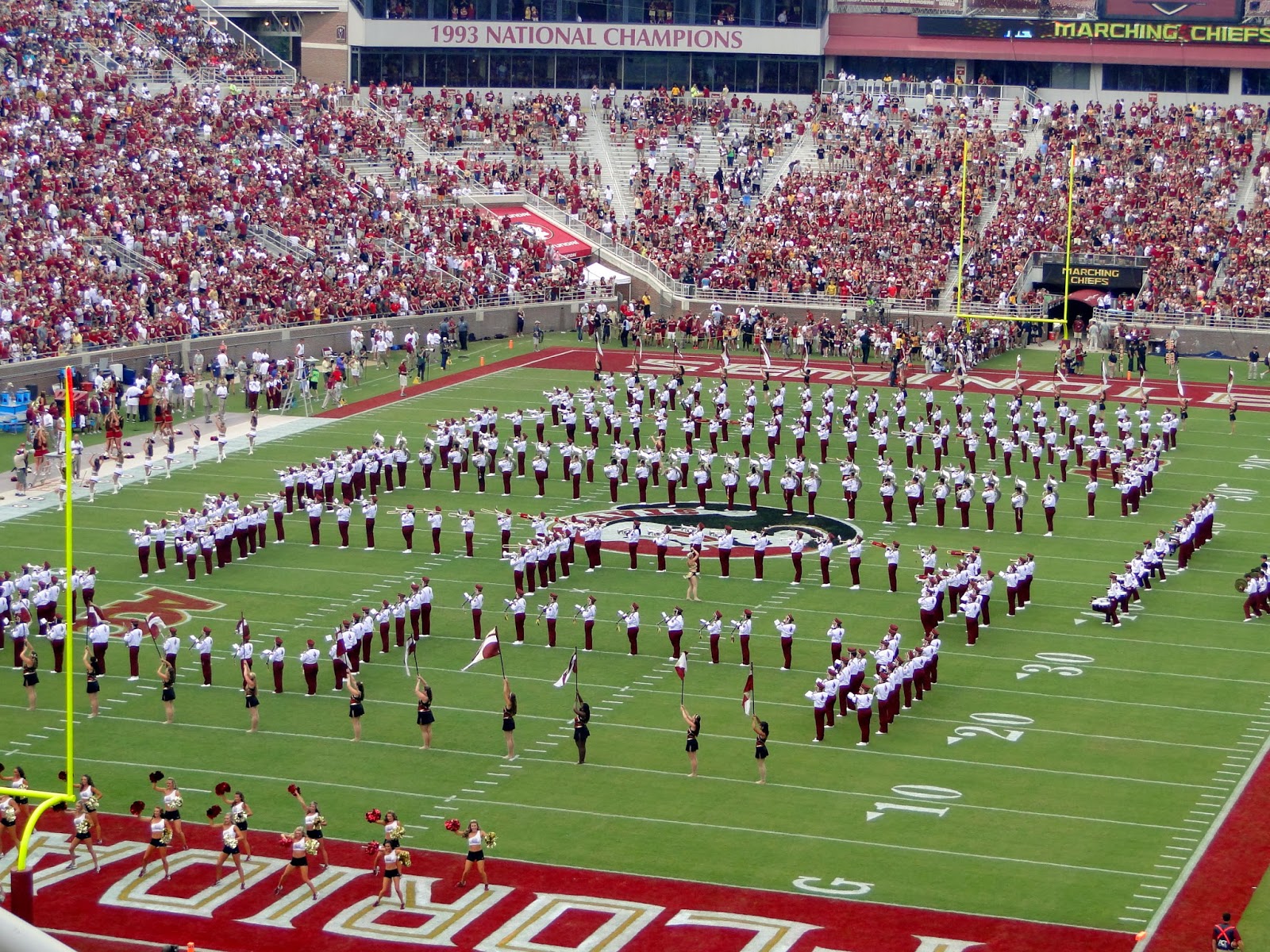 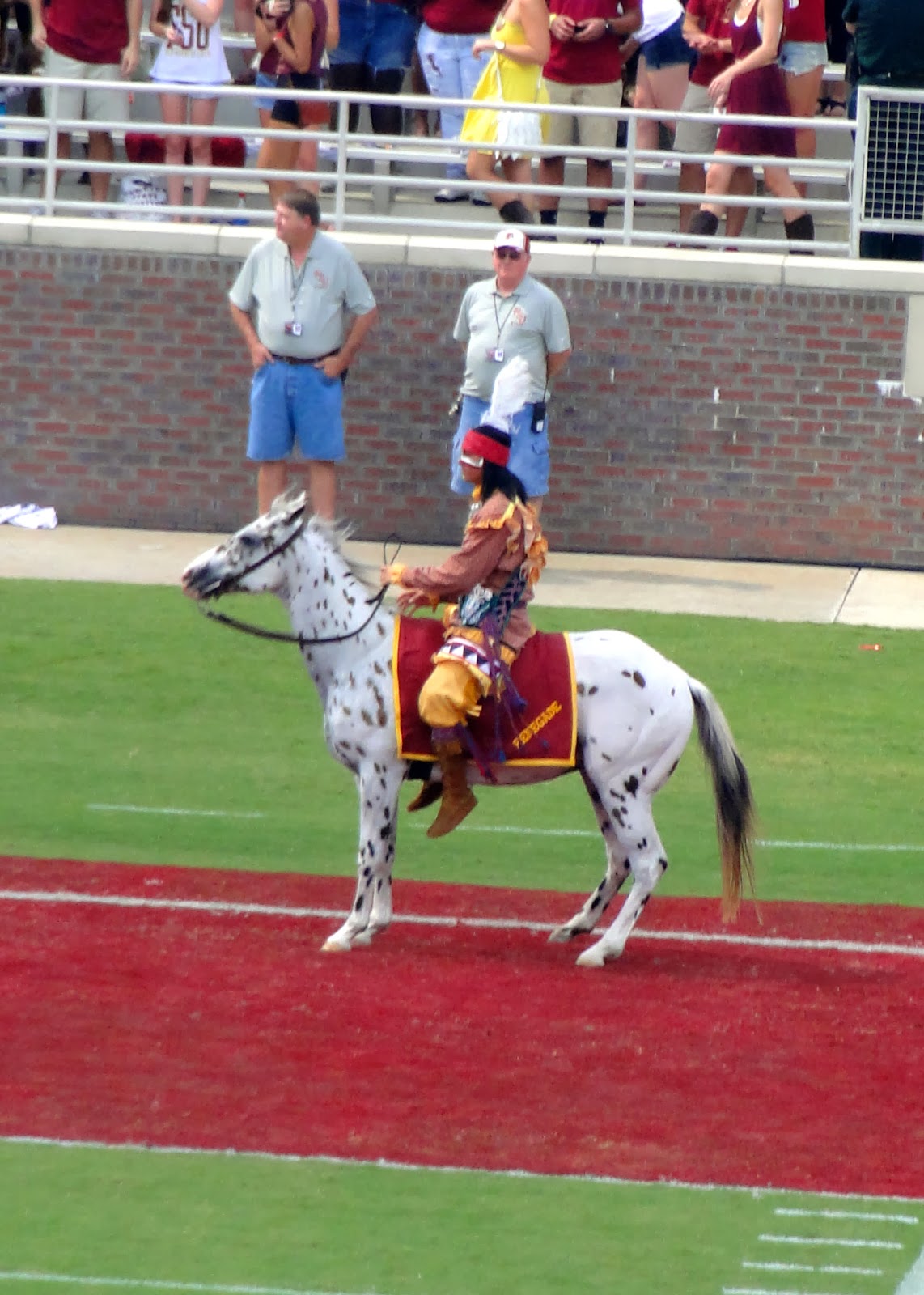 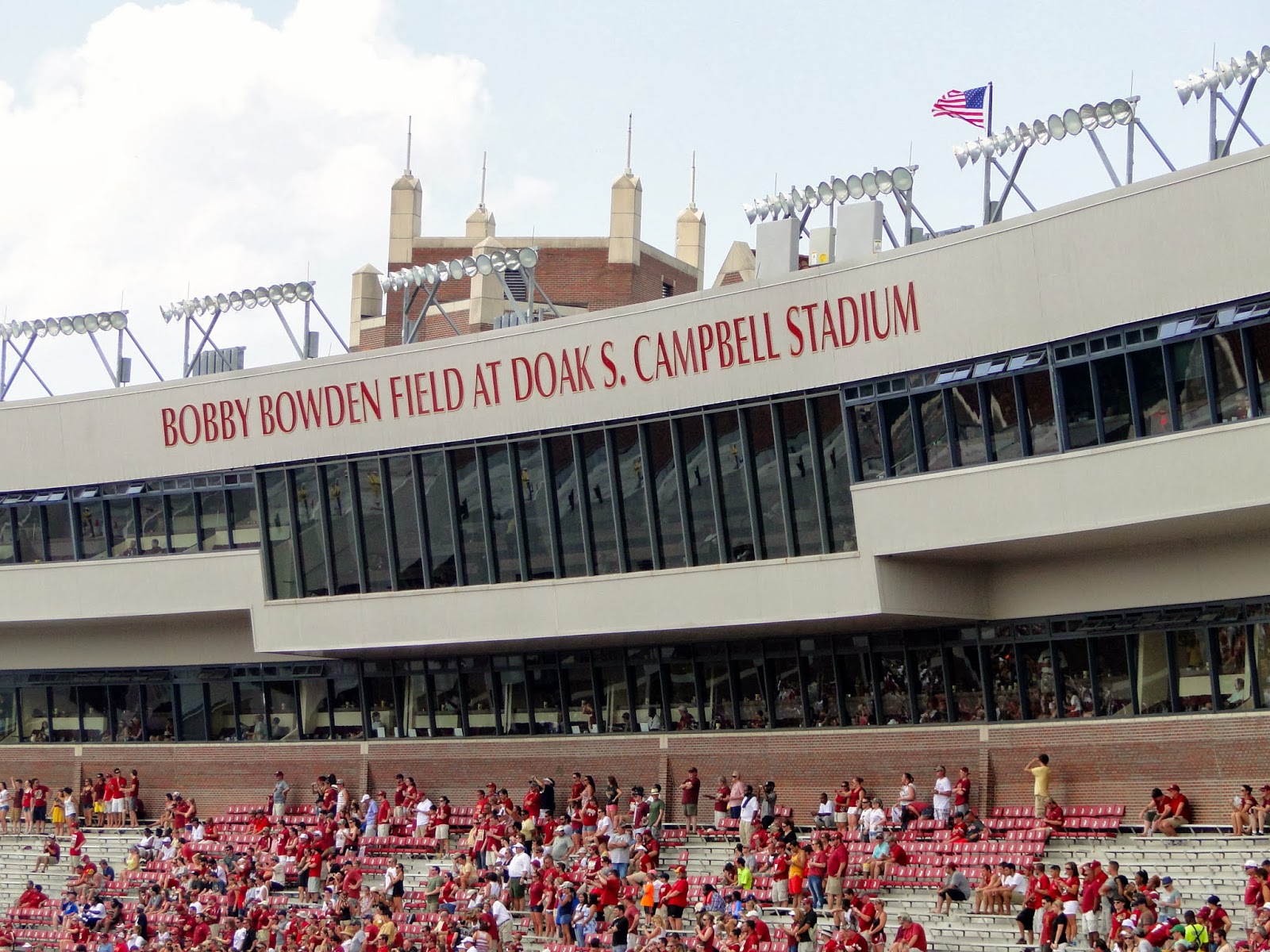 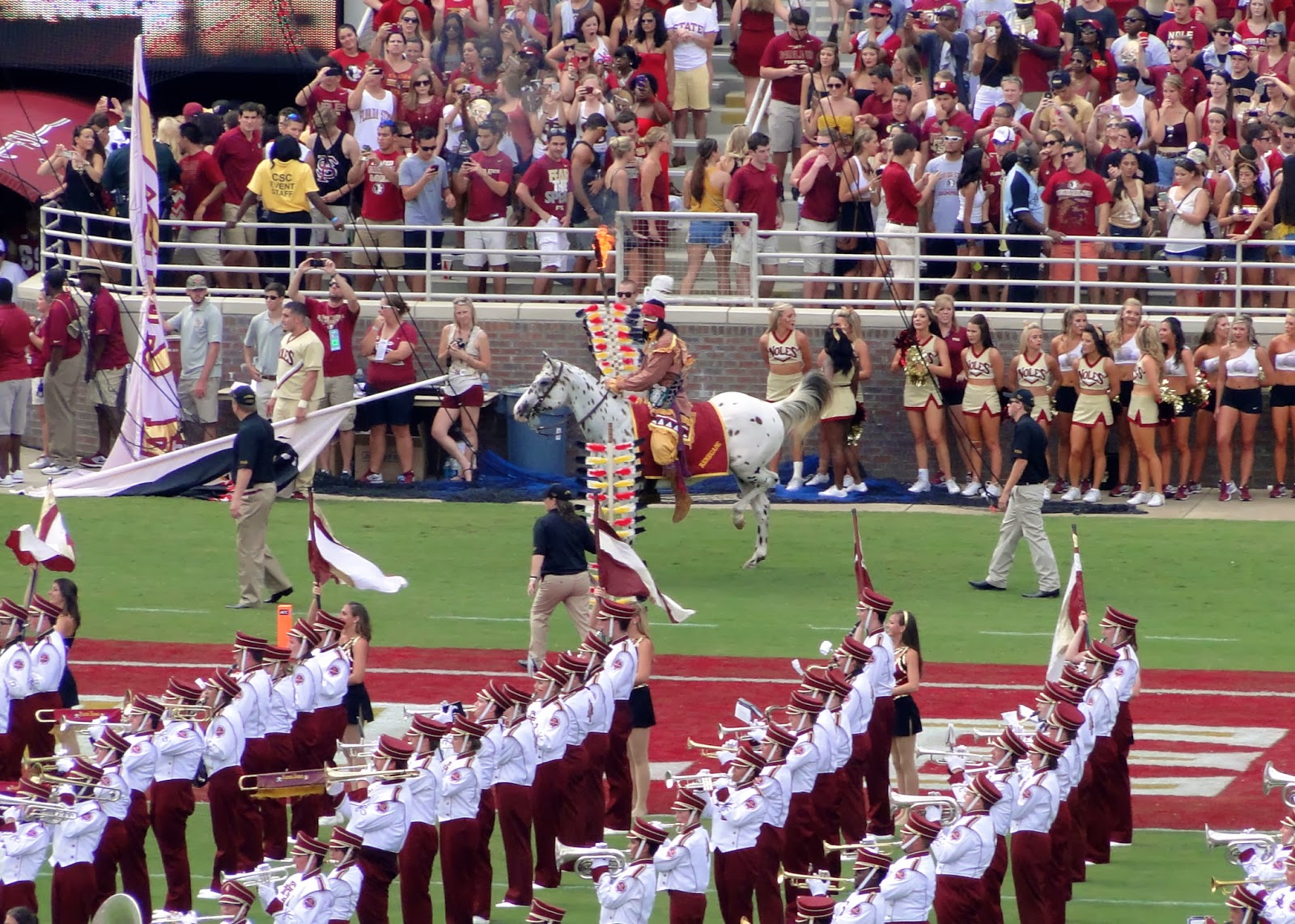 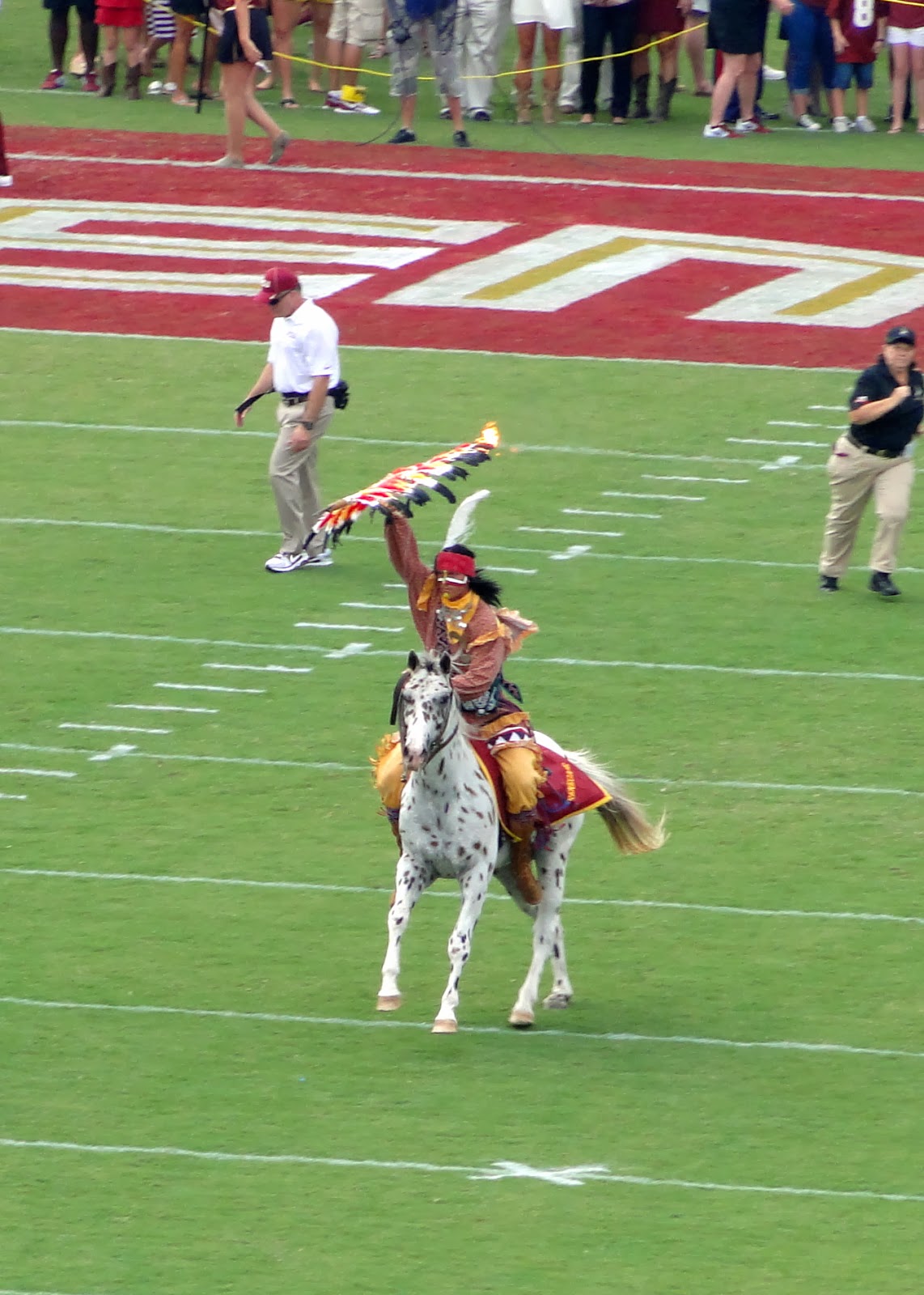 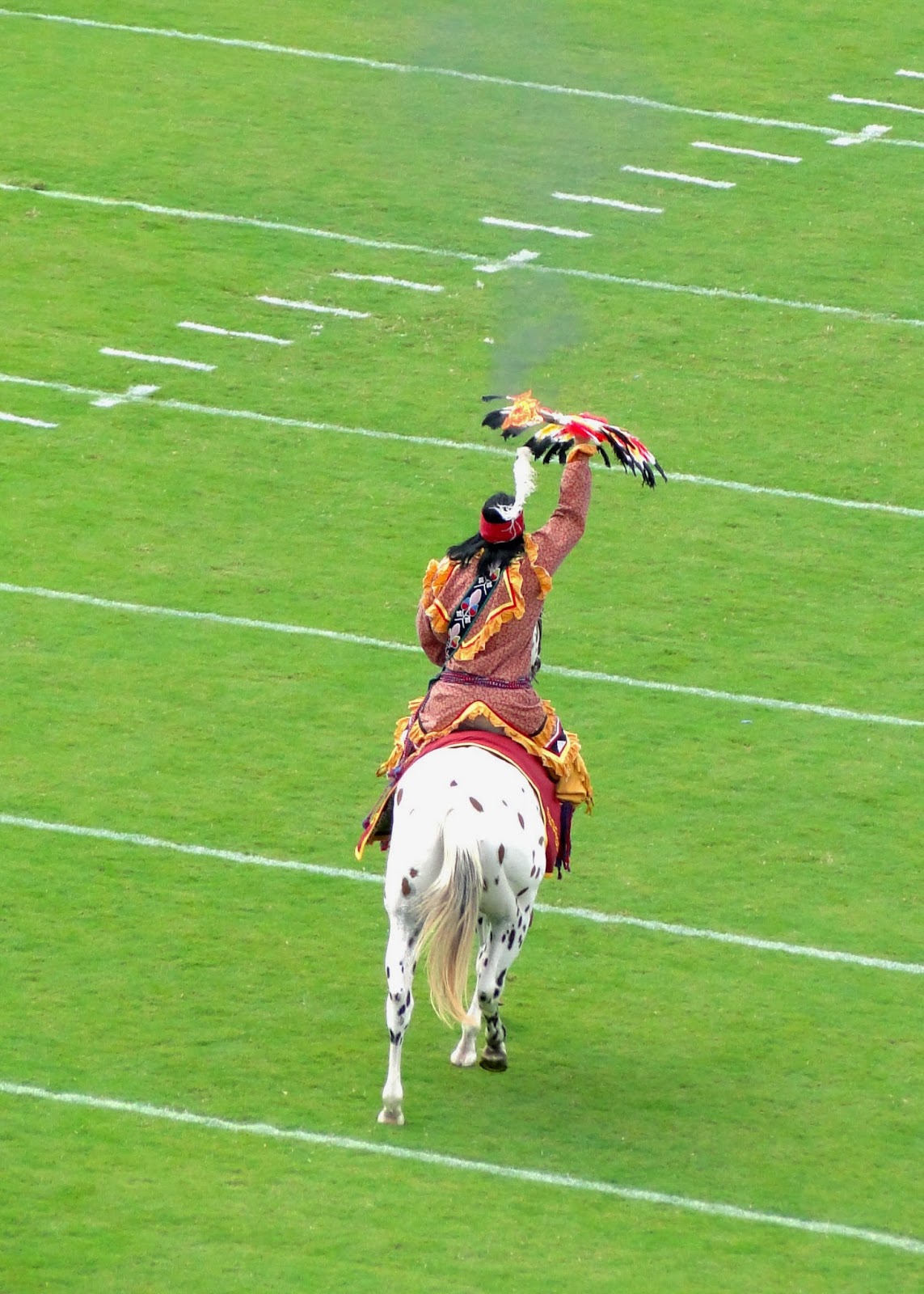 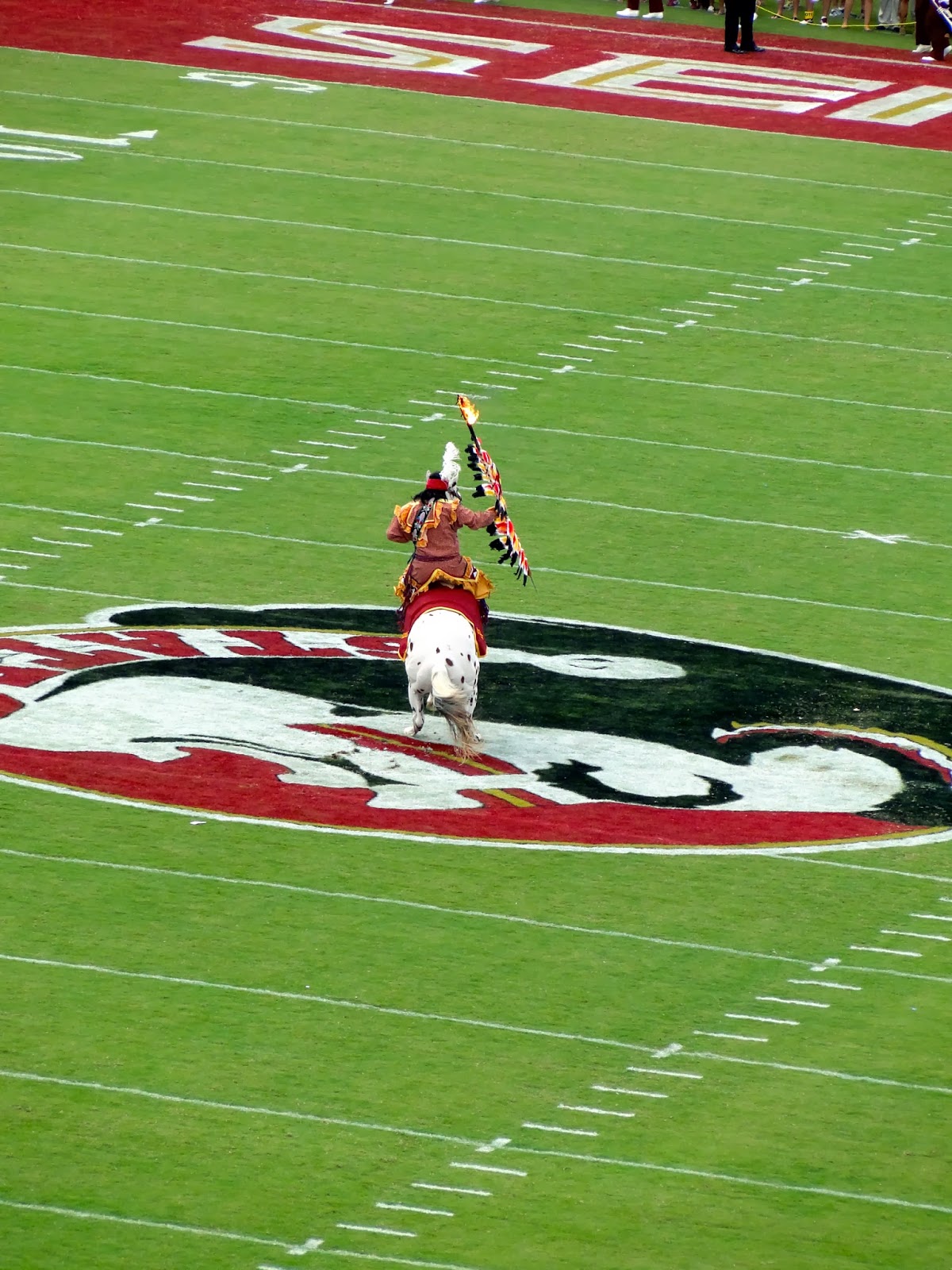 The game was at 3:30 and it was HOT. I know I bragged about our new Froggy Toggs towels in my Disney post but I’m about to brag again 🙂 We brought them along to the game and they were amazing! Better than my little mini-fans I always carry with me. I kept it around my neck most of the game and, legit, my hair wasn’t sweaty. They are SO awesome! Any family reading this try to forget I mentioned them b/c they are gonna make some killer Christmas gifts this year 😉 I wish we’d had them back in our VSU football days!!! I spent MANY a day sweating like crazy while watching Zach play! 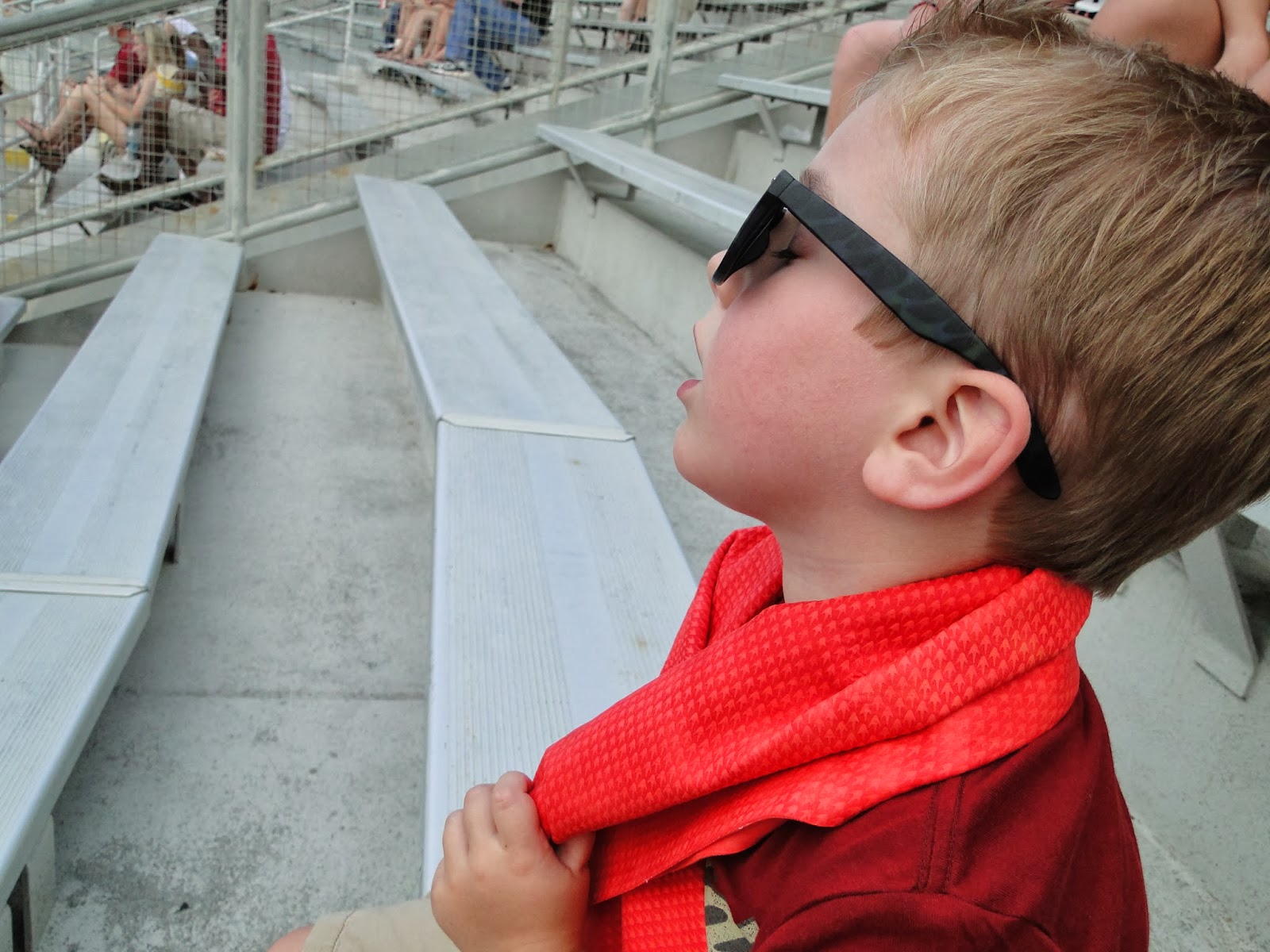 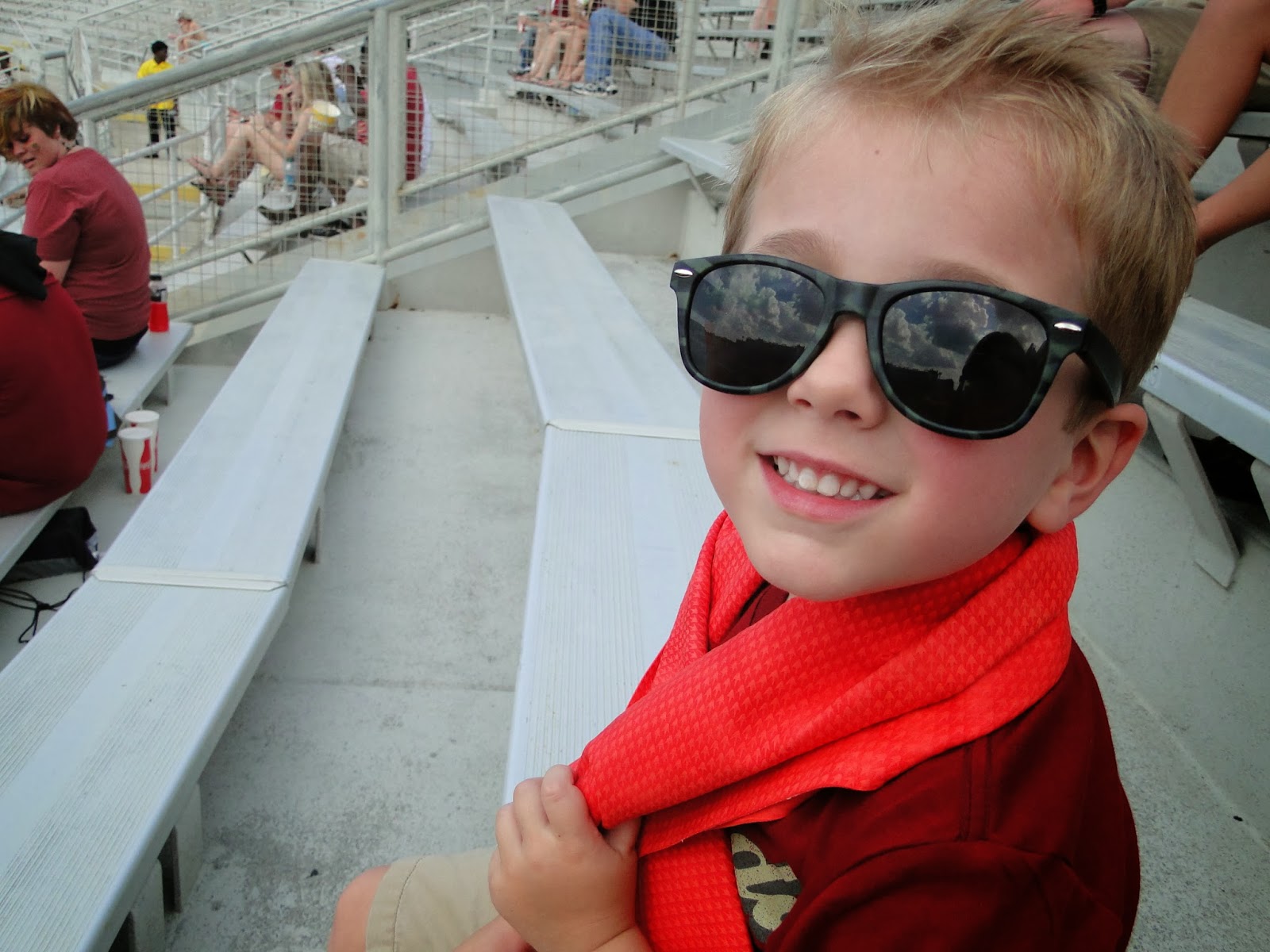 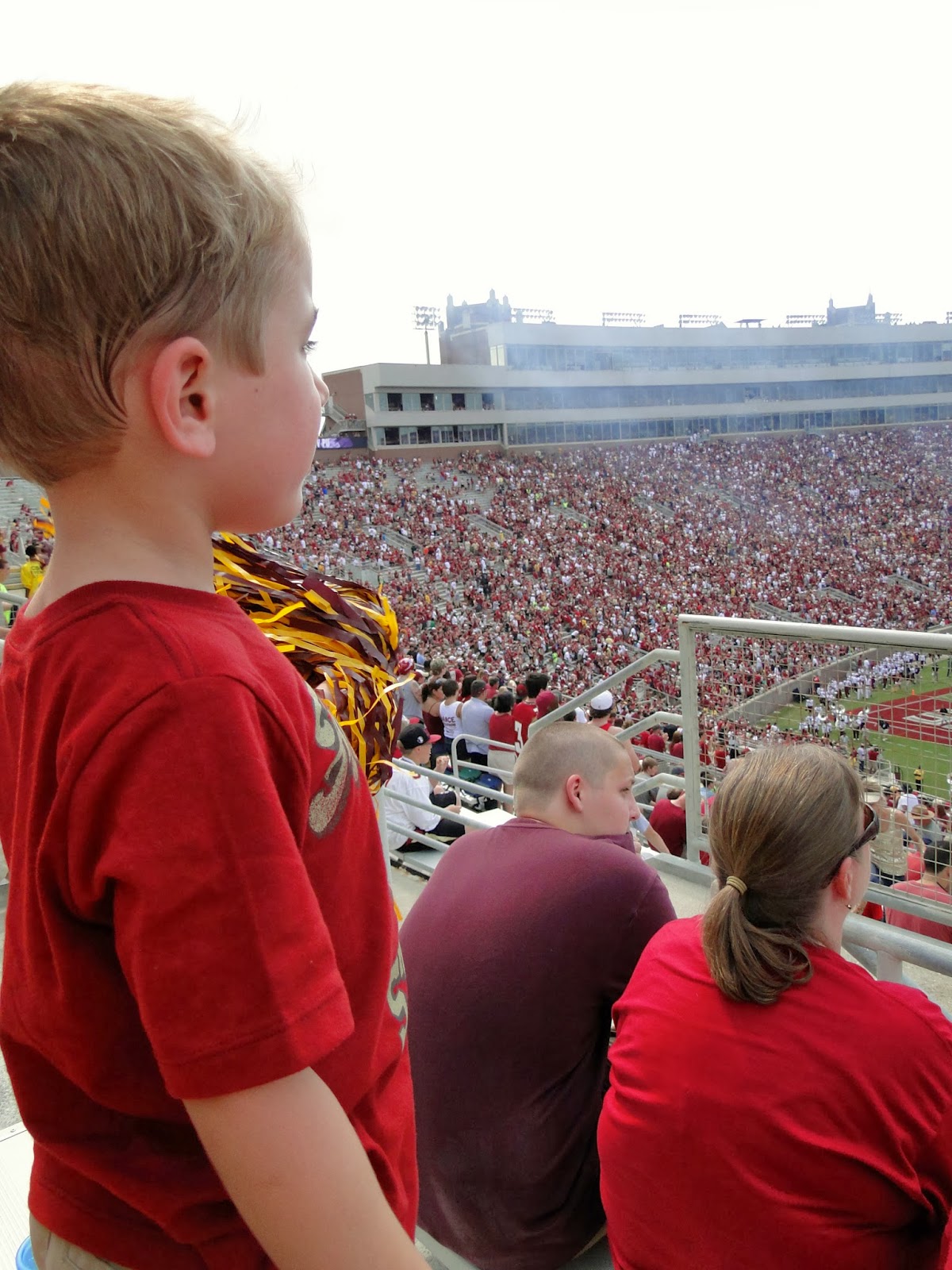 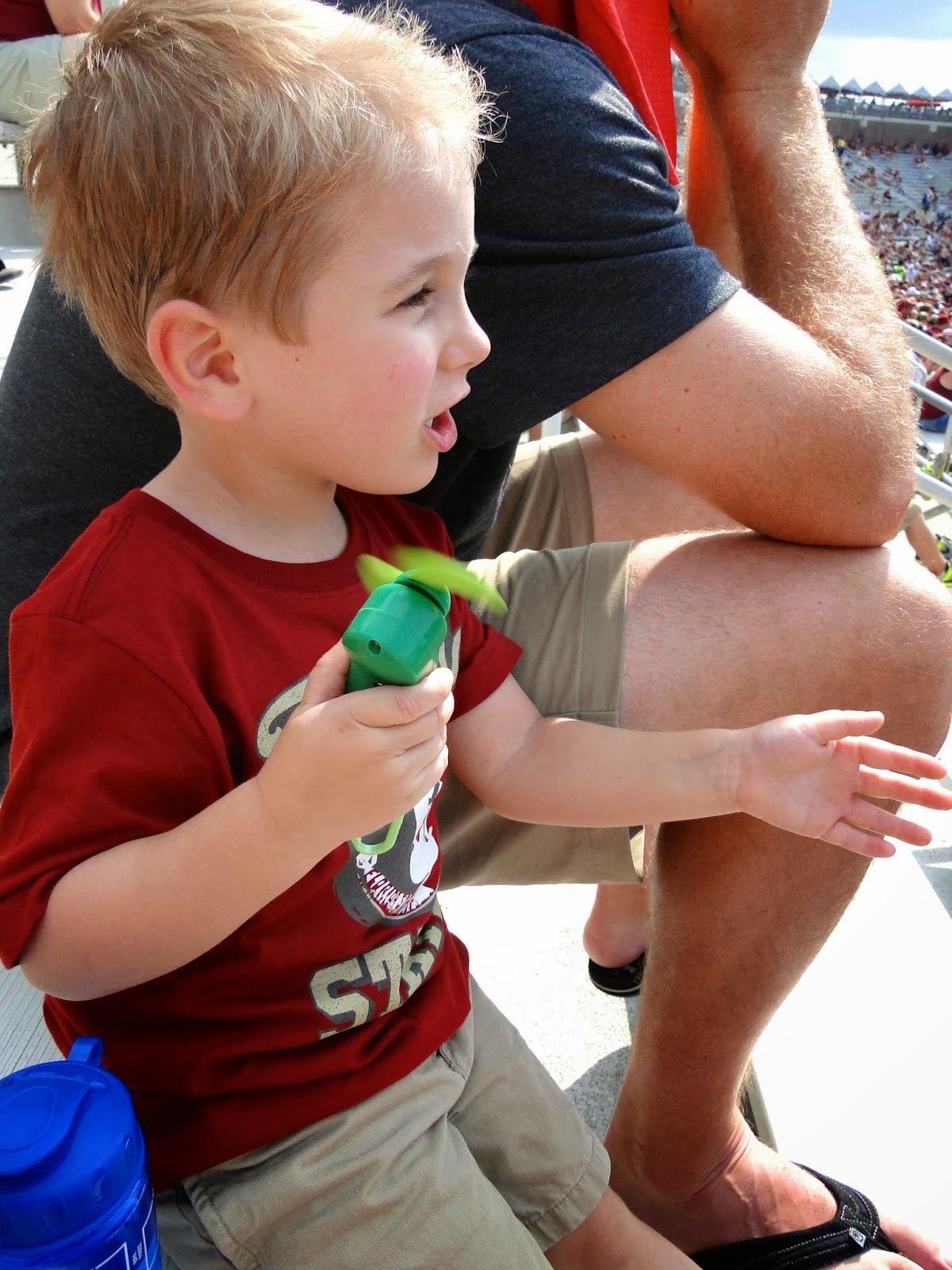 Zach doesn’t talk to us much during the game, he is FOCUSED 🙂 I try my best to let him enjoy it as I know it’s more “his thing” than my thing! 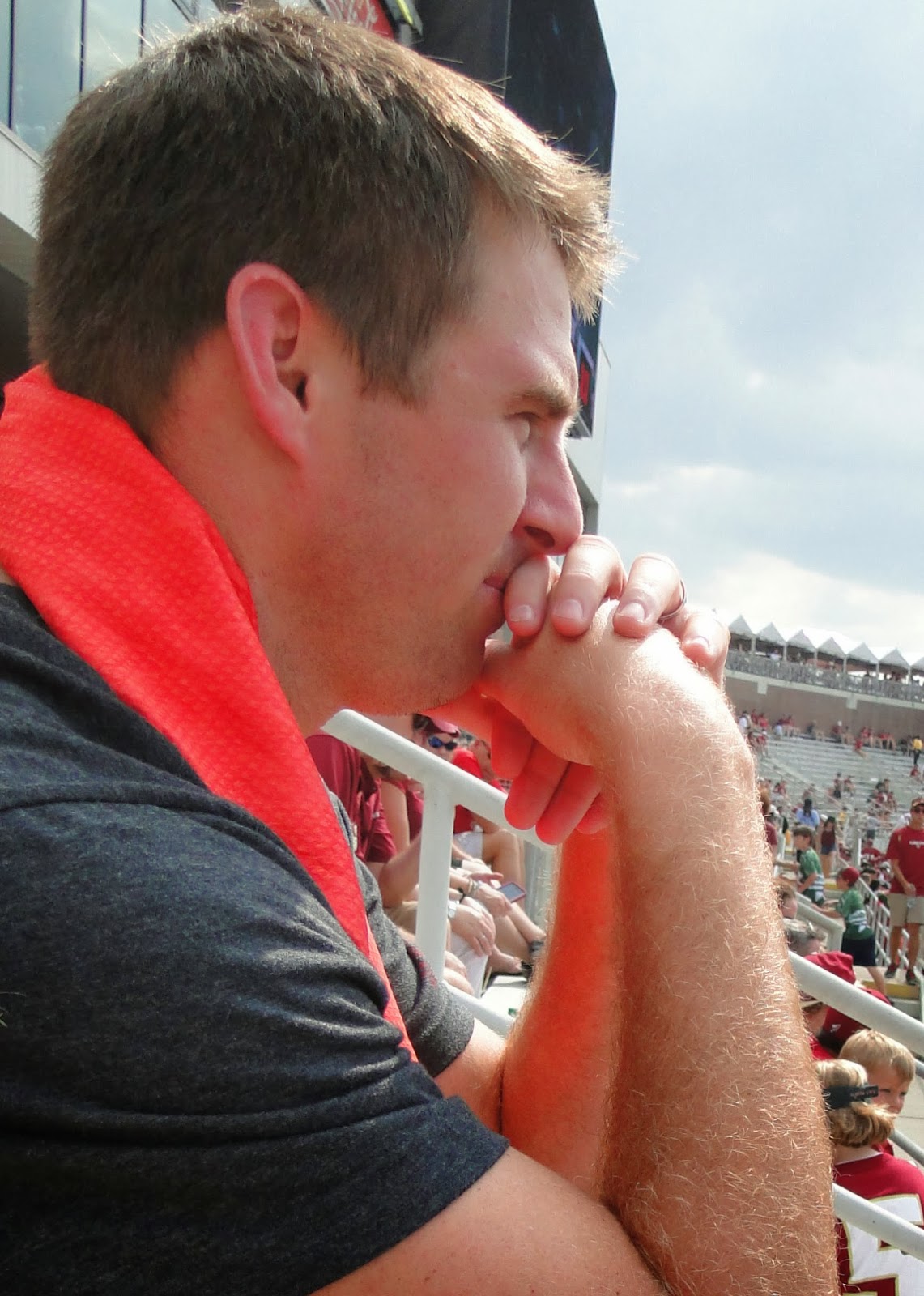 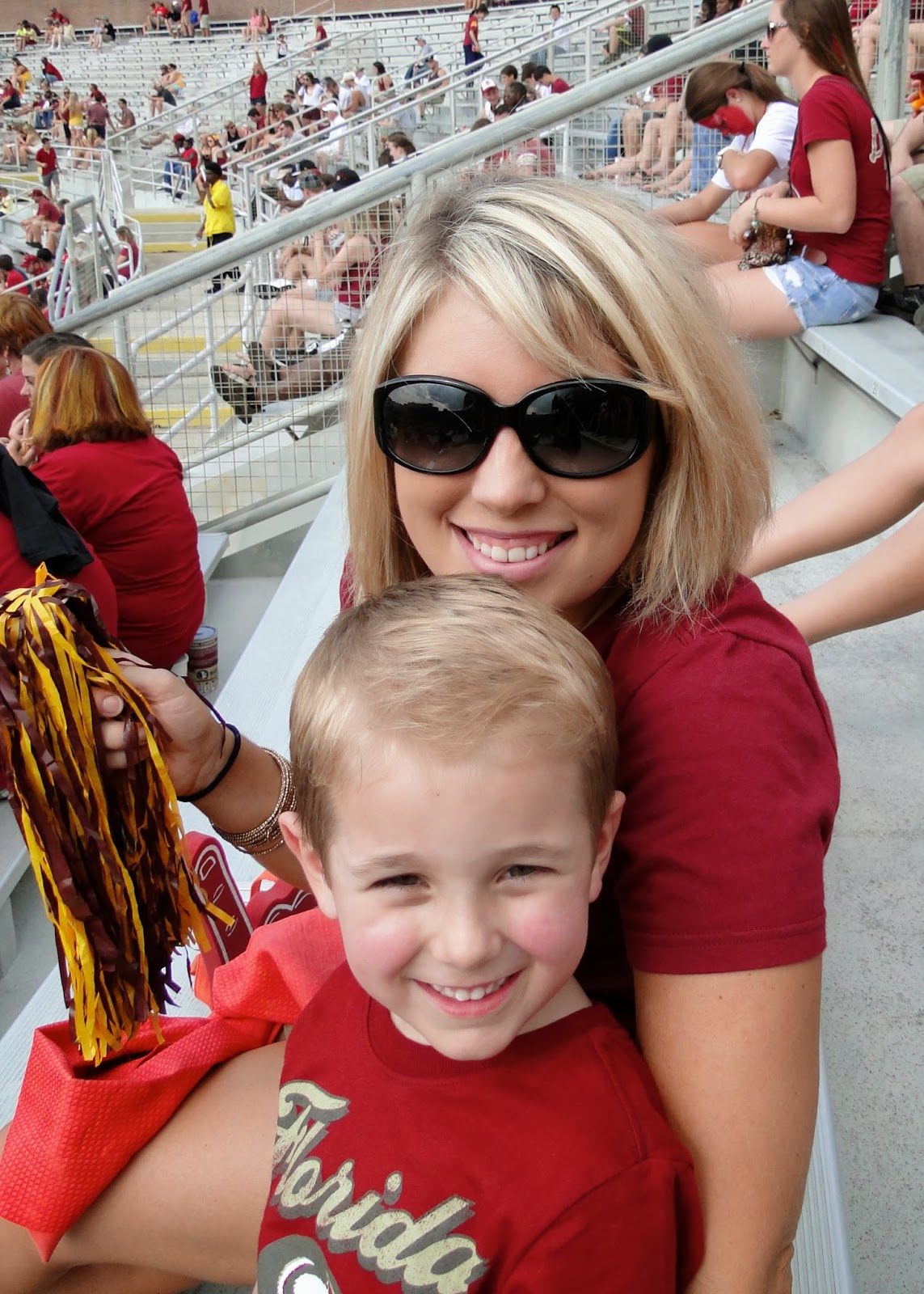 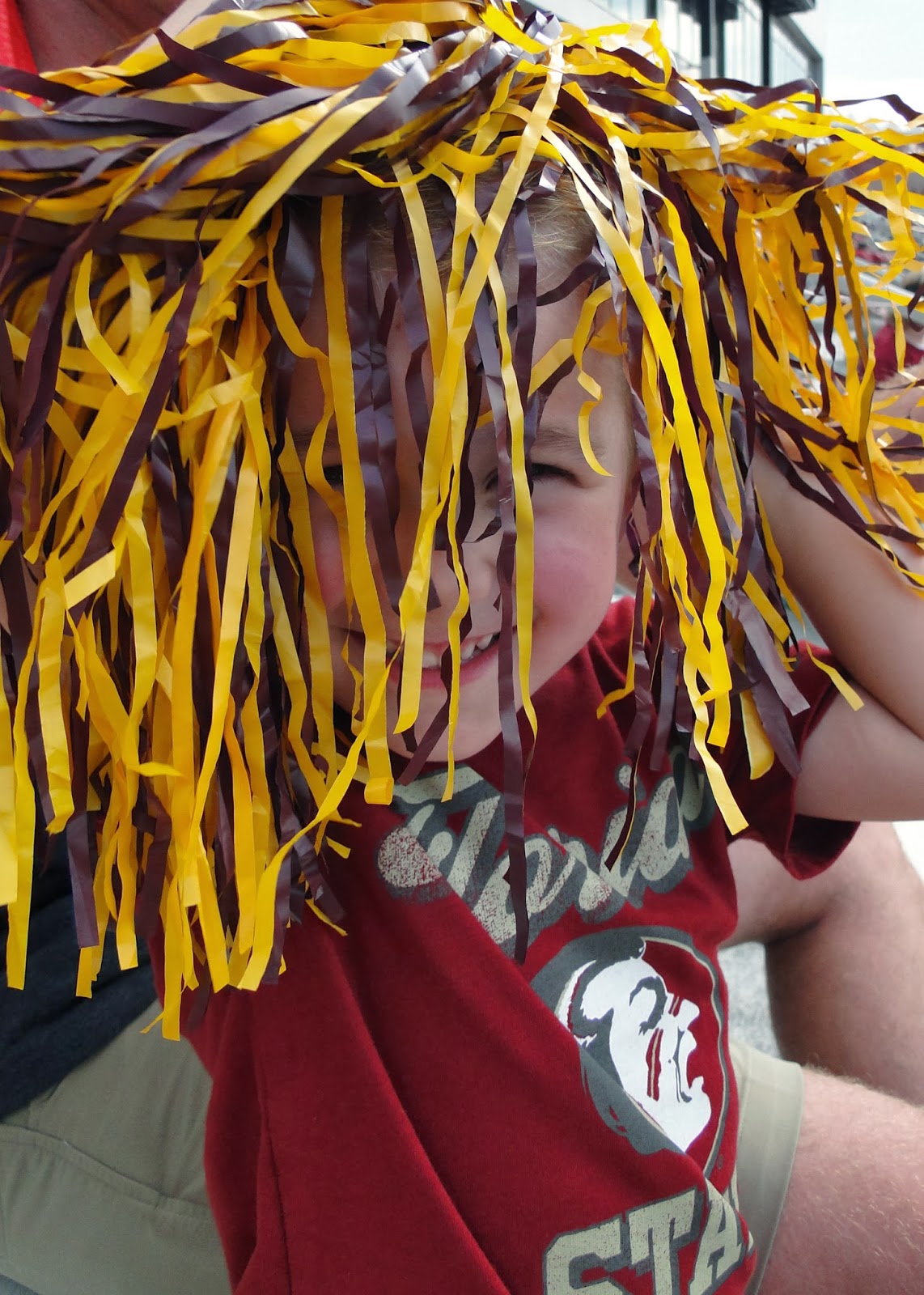 Kye took lots and lots of notes about the game 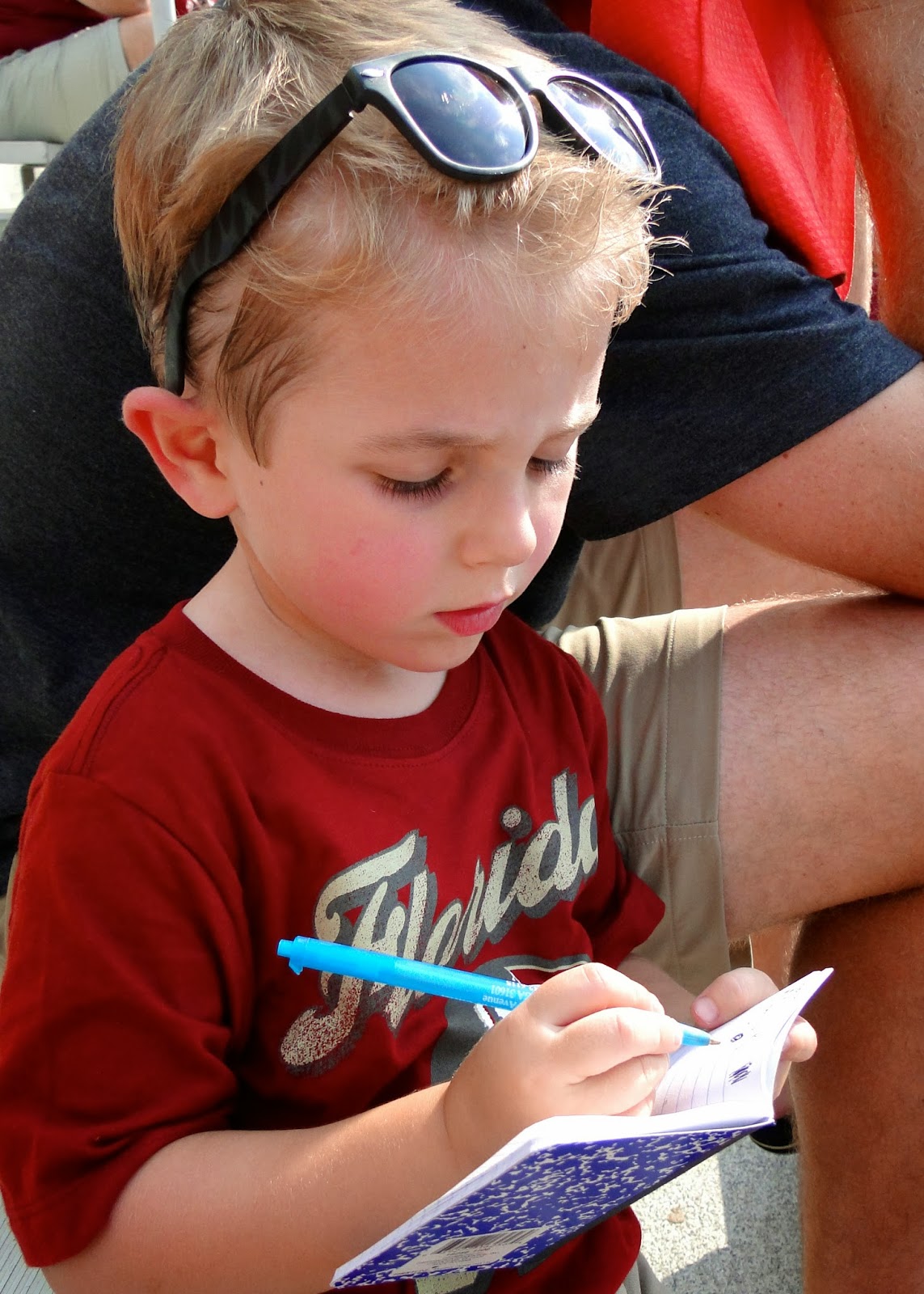 Hot dog time! (no, we didn’t give Kye the soda that came with it haha) 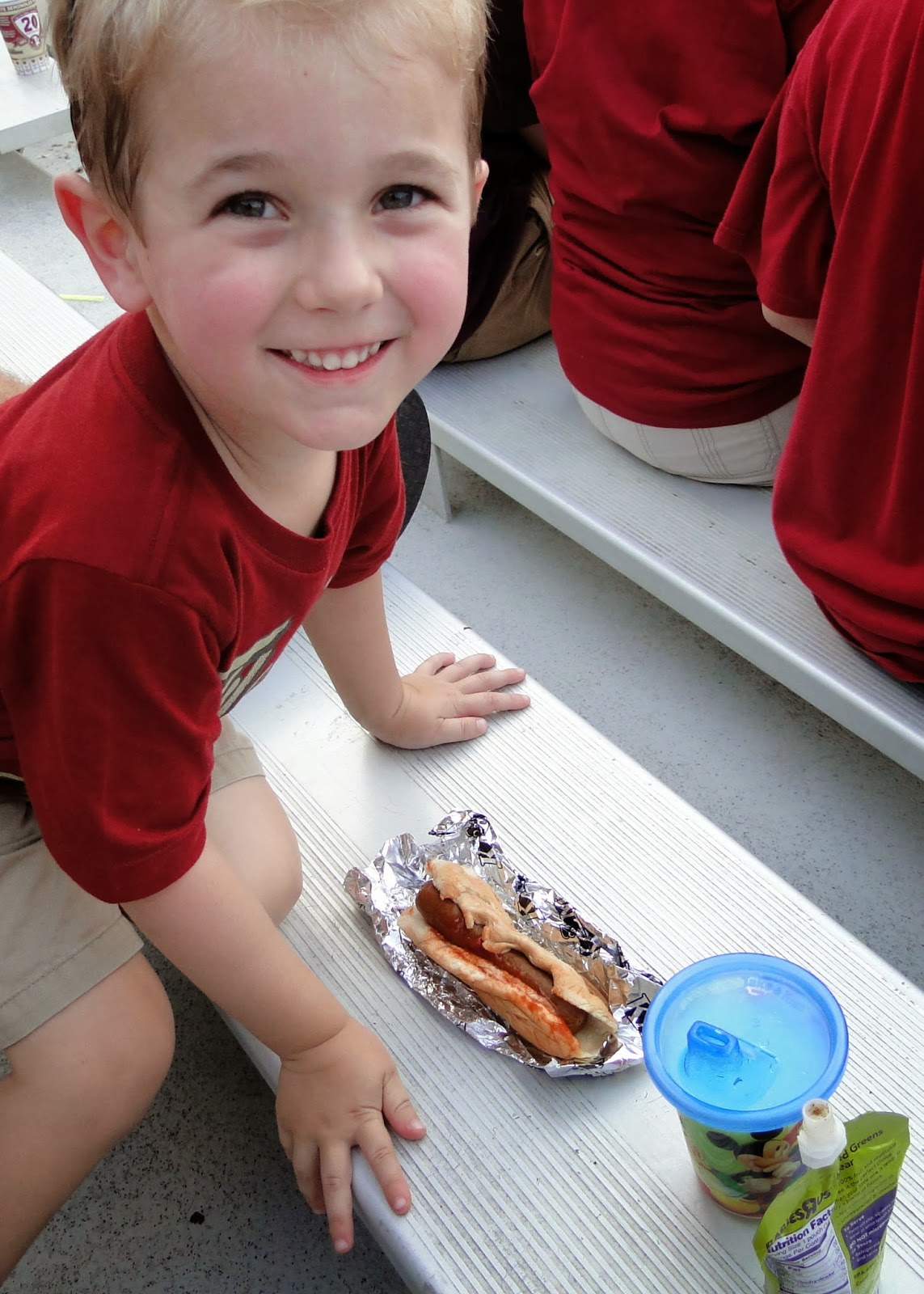 Even though Kye truly loves football, there is no way he’d be able to sit and watch the entire game. Heck, I couldn’t sit and pay attention to the whole first quarter 😉 I brought lots of snacks and lots of little toys along with us. They have buckled down on their purse/book bag rules at DOAK so it made it a little trickier for me but we made it work and they didn’t give us any issues. I was a little nervous that they would make us toss the snacks I brought but we were okay! There were several other boys around Kye’s age sitting near us and playing together and I asked Kye if he wanted to join them. But he said he only likes to play with people he knows. He was content to sit with us the whole game! 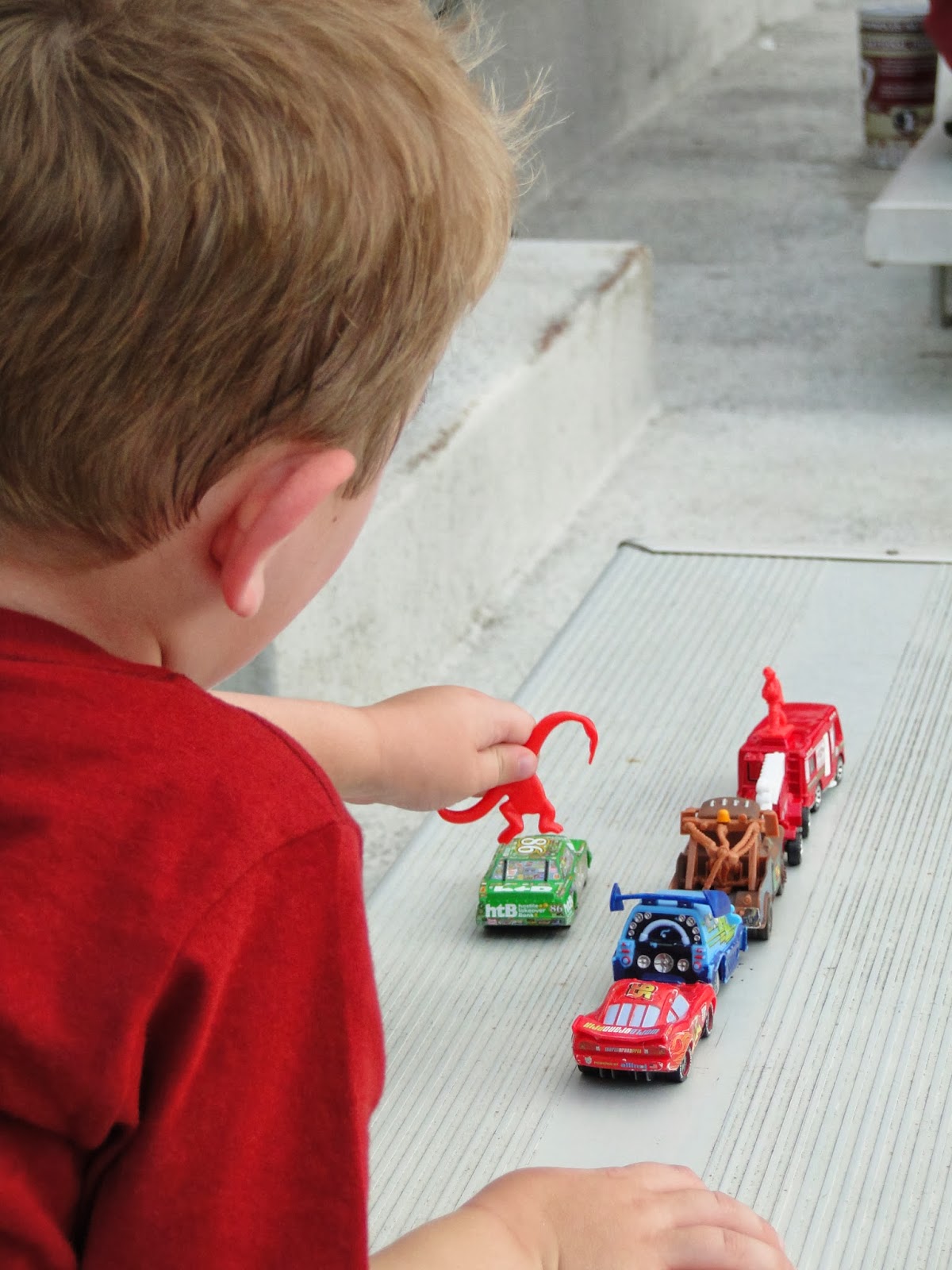 This #1 finger was actually my dad’s. I have no clue how old it is but I like to think that it’s from his days as a student at FSU. I mean that’s probably not true at all but it’s fun to think that haha 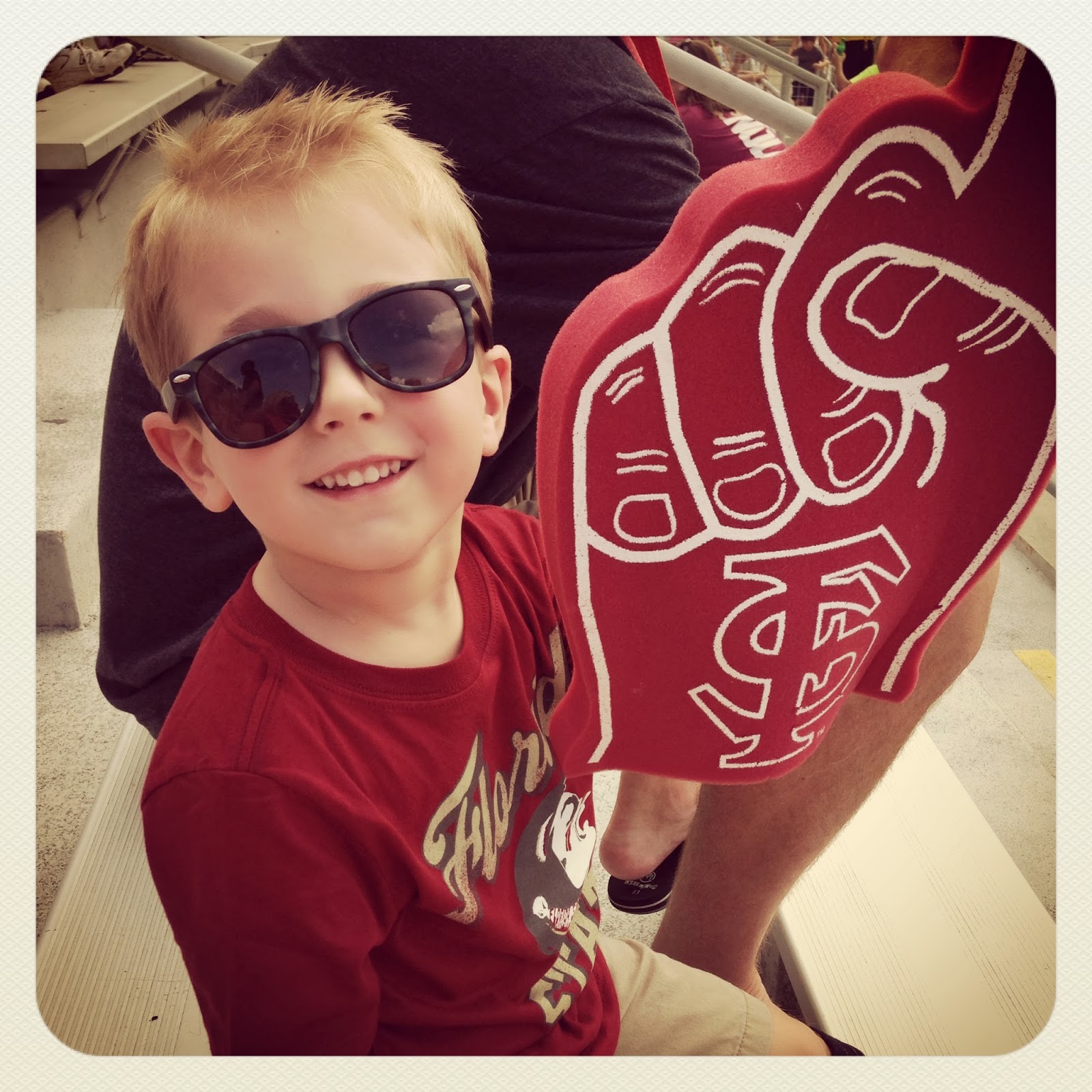 Kye’s memory amazes me sometimes! He specifically asked for this treat that he had at his last FSU game a year ago. He was sad that Aunt Casey wasn’t there to share it with him this time! 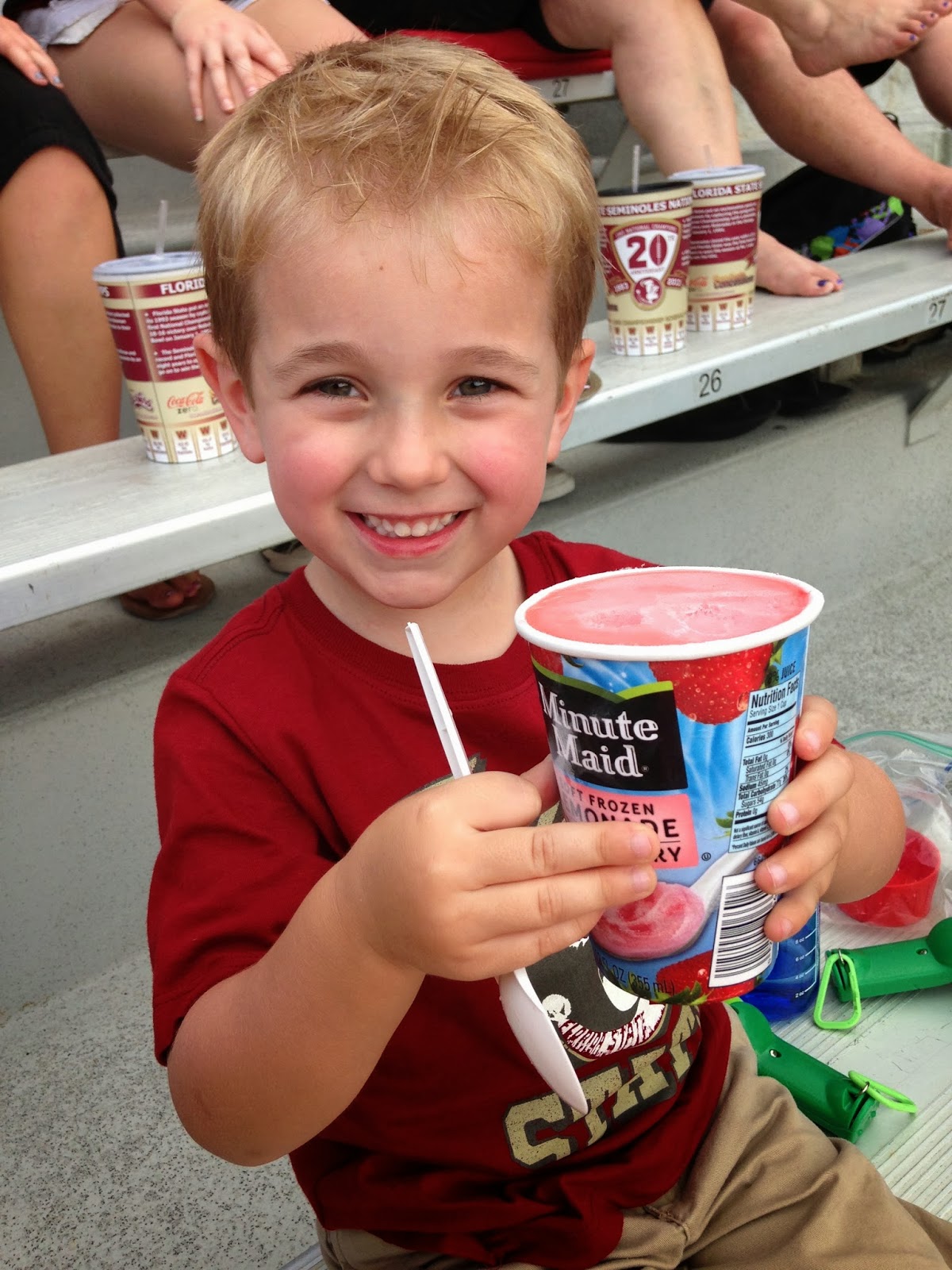 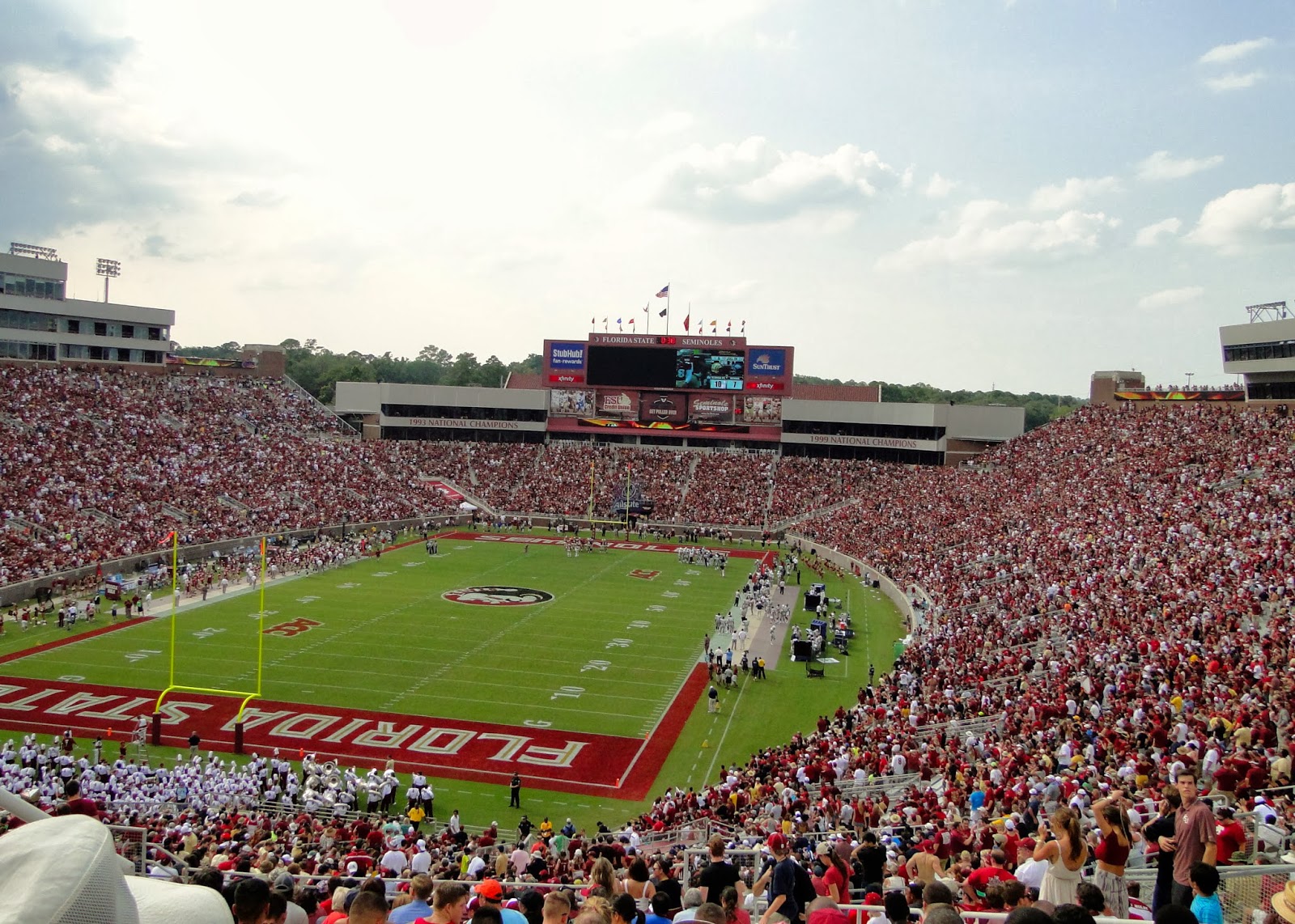 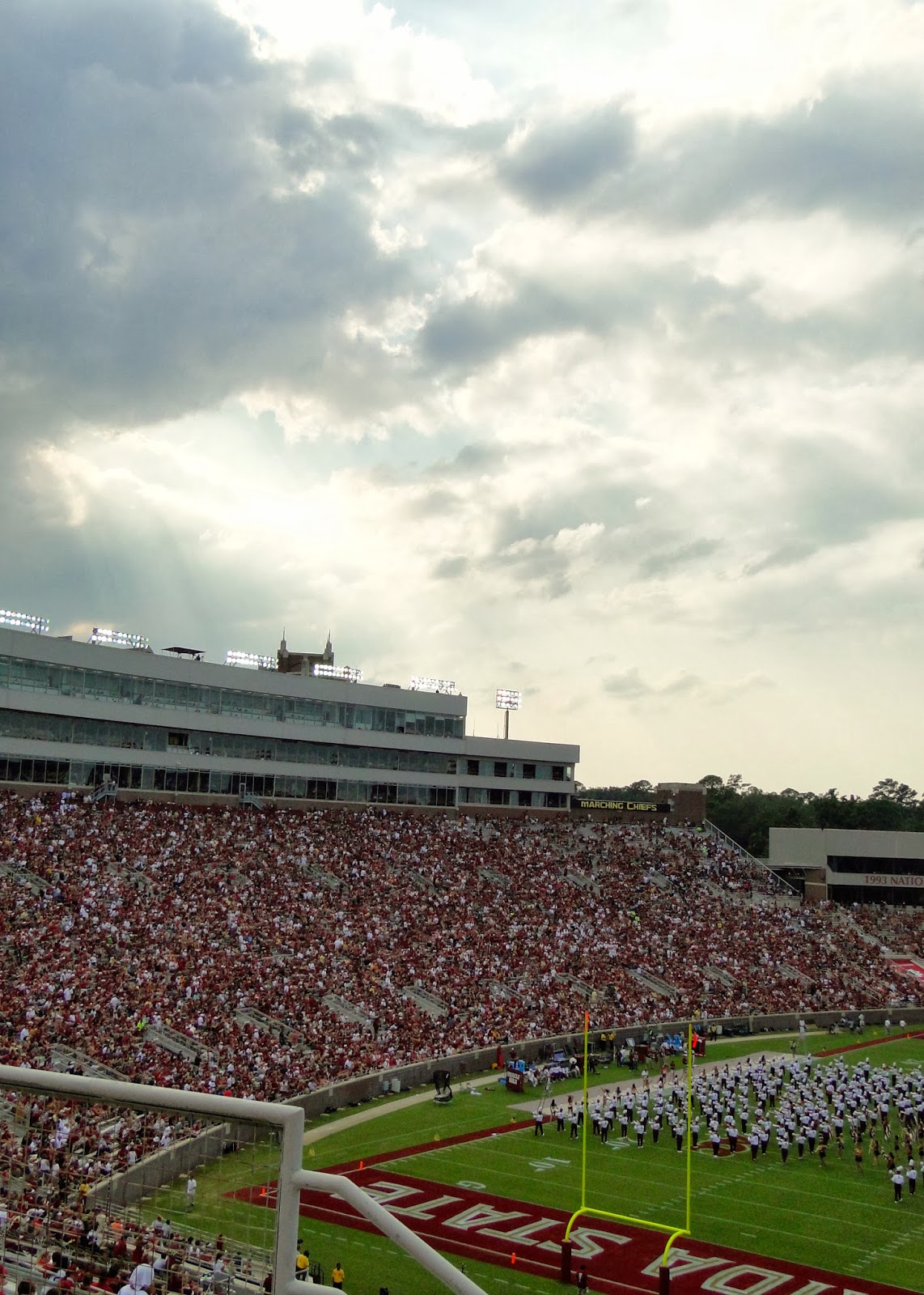 We had a great time and have loved our awesome season this year! I’m thankful we went to the first home game of the season, b/c now ticket prices have gone way up! I imagine if we keep playing the way we’ve been playing that ticket prices are going to stay high for awhile to come! Hopefully next year it will work out to take both kids along to the game…I def wouldn’t mind waiting until later in the season when the weather is cooler!