Have you checked out the facebook page for the blog??? It’s THE best way to reach me if you have any questions, want some advice, etc. Plus now that I’ve reached 100 “likes” I’m going to be giving away this fabulous Stella and Dot necklace!!! I’m going to pick a random winner from the people who have liked the page on Thursday August 30th at 2 PM so be sure to check it out here: https://www.facebook.com/JourneyOfParenthood

Not the winner? You can purchase your own On The Fringe Necklace here! 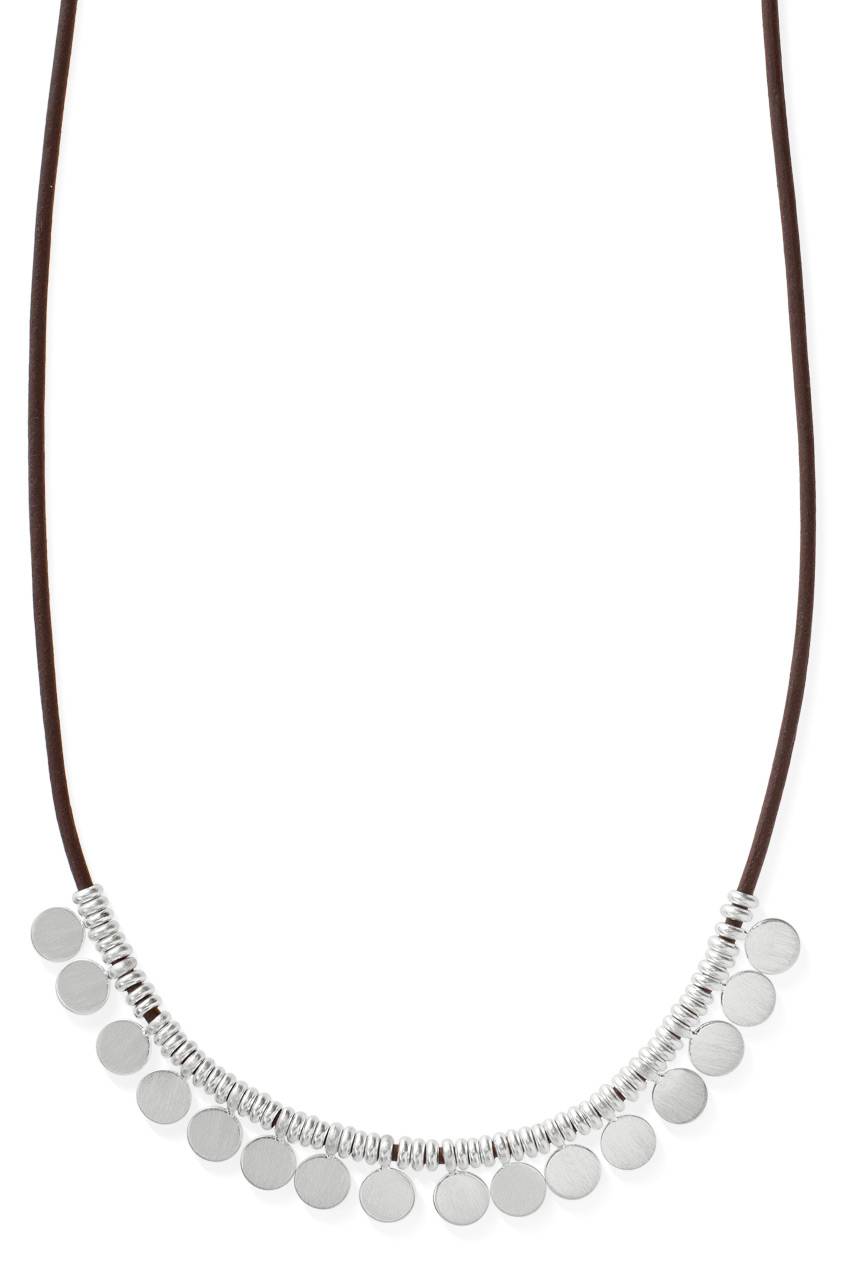 Even before I came to be a Parker, the Parker ladies typically take some type of girl’s trip each summer. I’ve gone on a couple of them…one time we went to Atlanta to the aquarium and last year we counted the trip when we went to the Zoo with the kids as our yearly vaca 😉 This year we decided we all deserved a quick trip to the BEACH! I found a great deal on a nice hotel through hotels.com and the boys all agreed to keep the kids so we could enjoy some time away together.

The trip fell on my last day of the cleanse phase of my 24 Day Challenge. Up until that point NO ONE other than Zach, Rach and Danielle knew I was doing Advocare. I just don’t like pressure and didn’t want everyone judging me and looking at me differently ya know? So I didn’t tell anyone. However…it’s not really the type of thing you can keep a secret on vacation. I mean I was picky with what I ordered, had a lot more vitamins than normal that I was taking, was drinking water constantly and even packed little healthy snacks for myself. By the time we drove to Jacksonville and got to dinner they could all tell something was up! I went ahead and spilled the beans. It SHOCKED me at their reaction. I told them how my headaches had literally disappeared and how great I felt (even though I was still a little bloated at this point). Right away they all said they wanted to try it out too!!! It made me feel SO GOOD to have their support and to know that my personal changes could help them out as well with their goals 🙂

Our first stop was DINNER. Casey and Courtney really wanted to eat at Ted’s Montana Grill. I’d never been to one before so we went there! I got a bison burger with a wheat bun and it was SO GOOD. I also had yummy beans and the waitress drove me insane with her lack of ability to keep my water glass full 😉 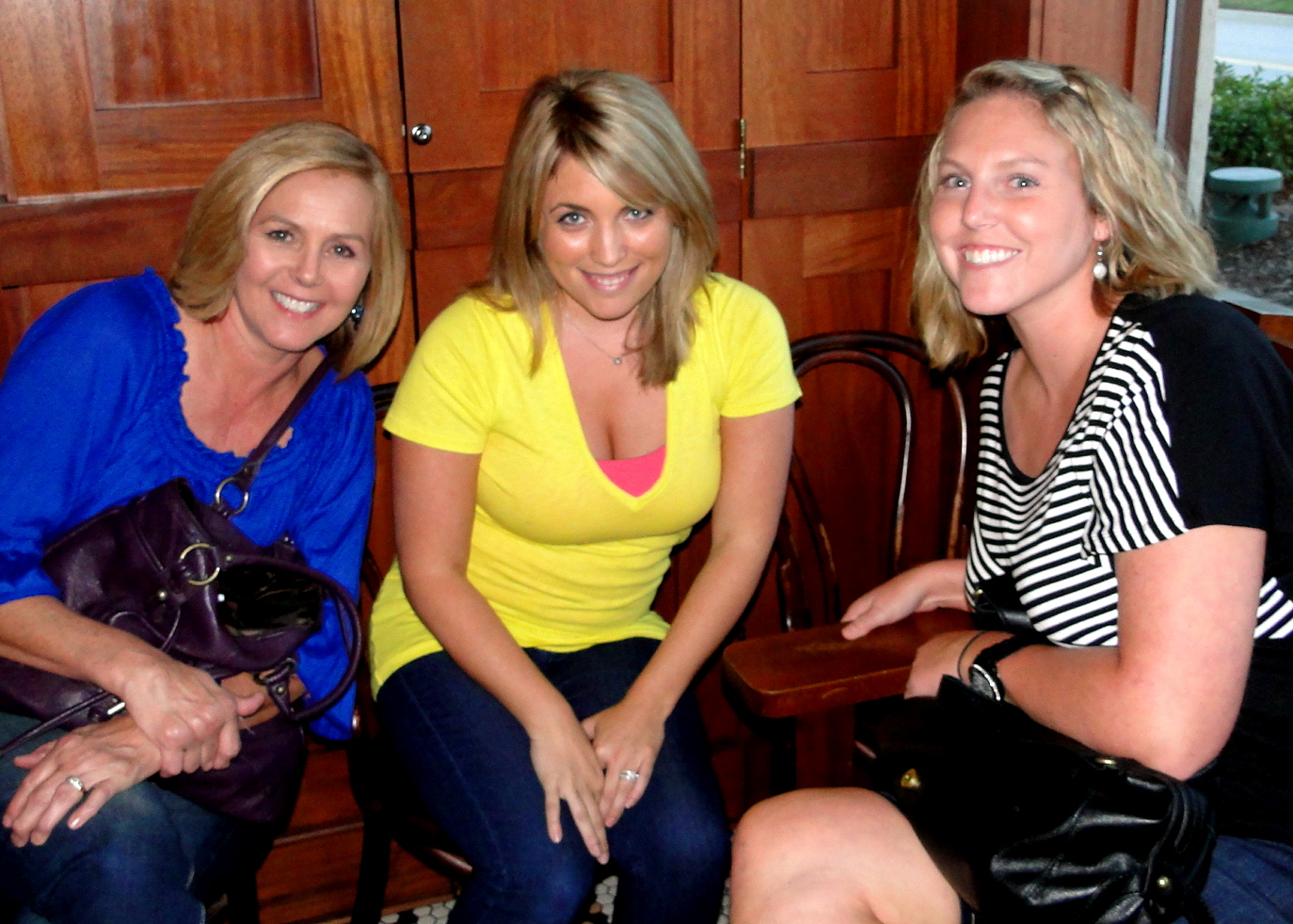 After dinner we, duh, had to hit up Mochi. It was a must. And who am I to refuse??? I didn’t get nearly as much ice cream or toppings as usual but I HAD to indulge a little!!! 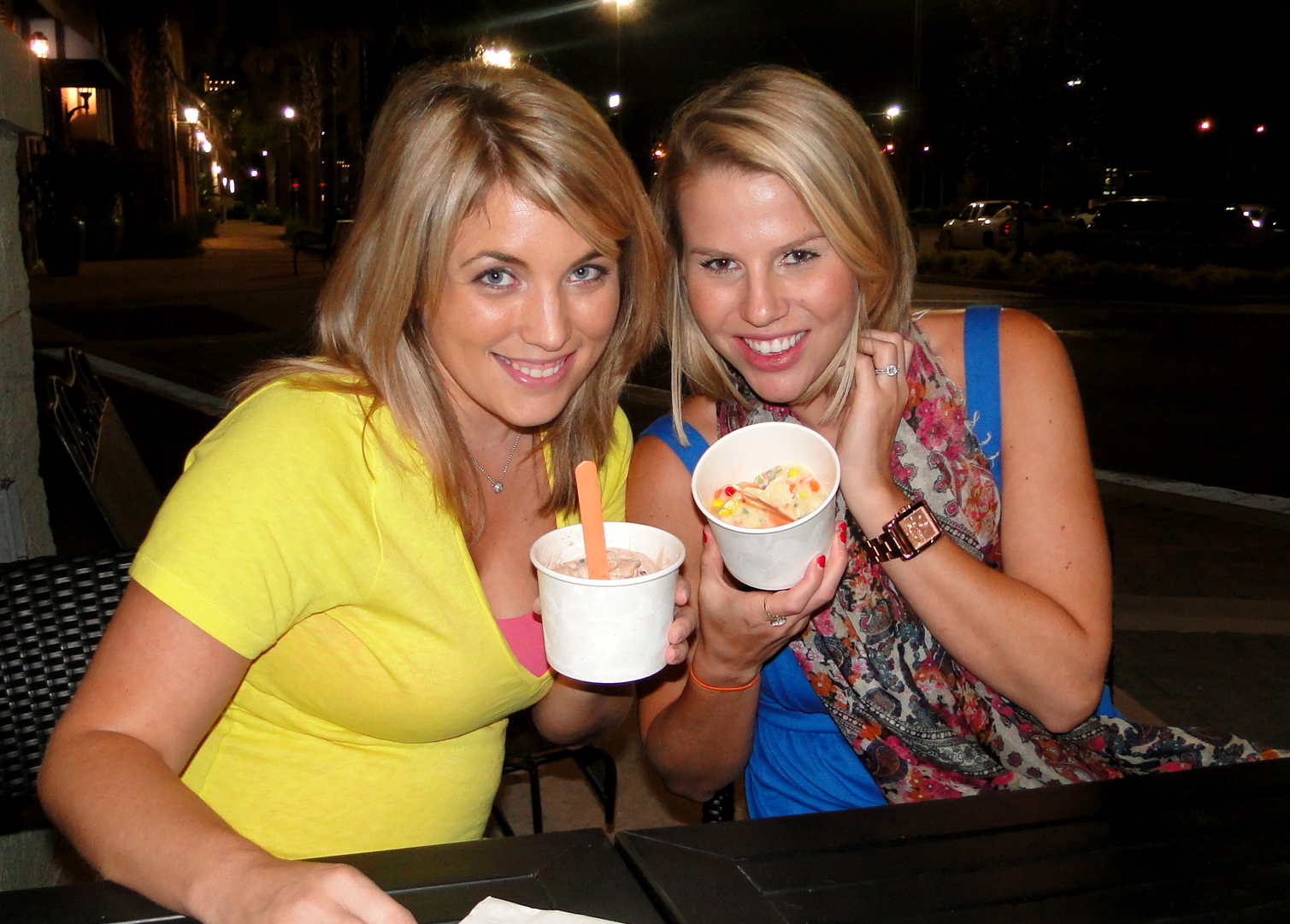 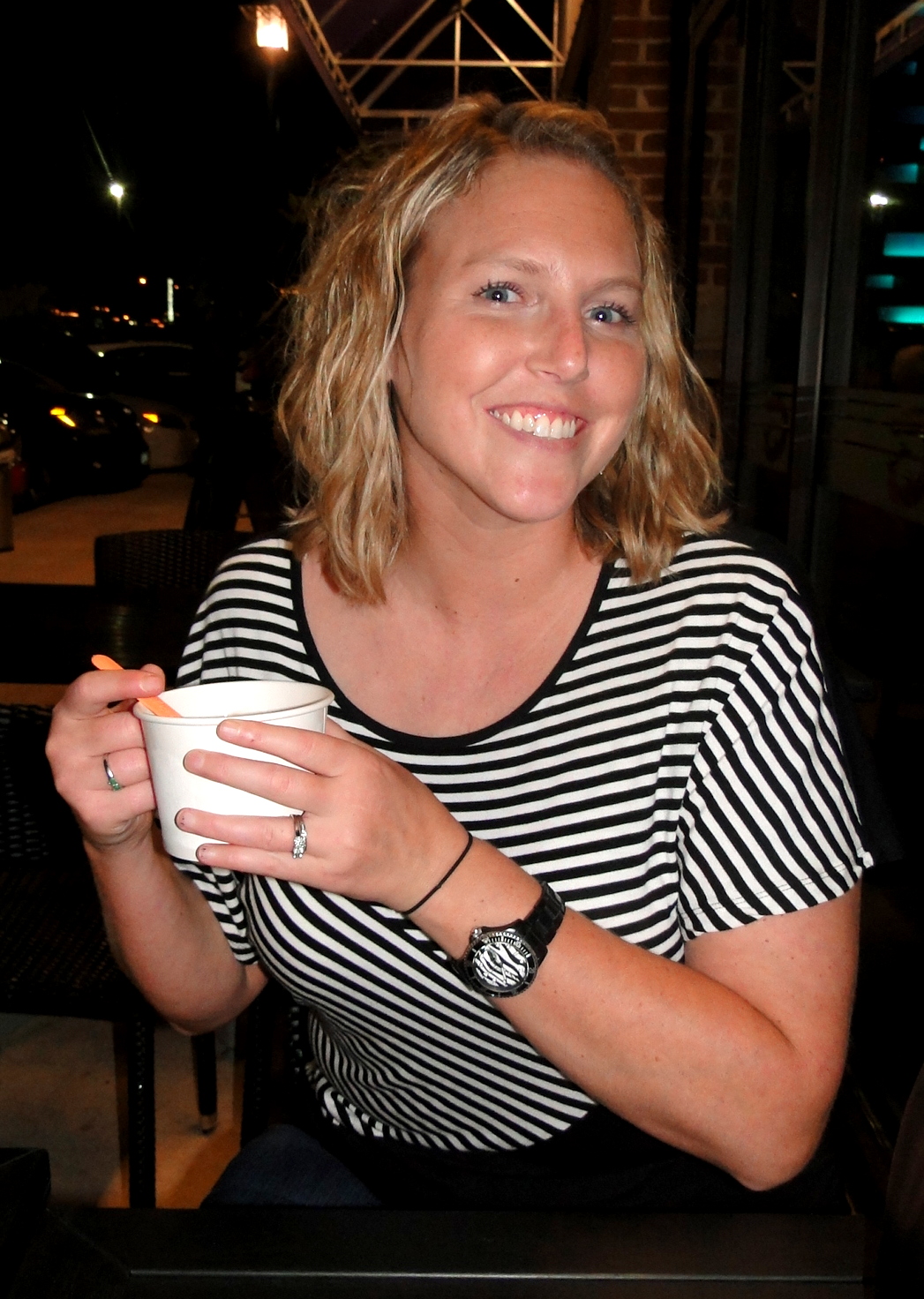 We had SUCH a chill weekend. We stayed up super late talking. We semi-watched the Olympics opening ceremonies but mostly just talked 😉 The next morning we enjoyed not having to RUSH. We slept in a little bit and I enjoyed a Meal Replacement Shake (it was my first time not making it into a milkshake type thing with the blender…and it was still super yummy) while they went downstairs to eat the free breakfast buffet. I pumped and we headed out to the beach!

Our hotel was a drive to the beach…but the drive ended up being a little further than it had to be. We struggled to find a public beach access area…but enjoyed seeing ALL the beautiful homes. I counted ALL the blue doors I saw 😉

We enjoyed soaking up the sun for a few hours. Just relaxed. Read magazines. Talked. Moved our beach chairs back as the tide came in. It was heaven. I felt guilty having to have the schedule revolve around me to a degree with my pumping so I didn’t want to ever mention anything about my dieting too. I packed a little snack and did great with it! I worried it’d be tough to stick to the plan while on the go but it really wasn’t. It all went super smoothly and I was able to eat when I was supposed to the entire trip 🙂 For lunch we picked up some subs at a locally owned sub shop (TOTALLY reminded me of Bagel World!!!) and went back to the room to eat so I could pump 🙂 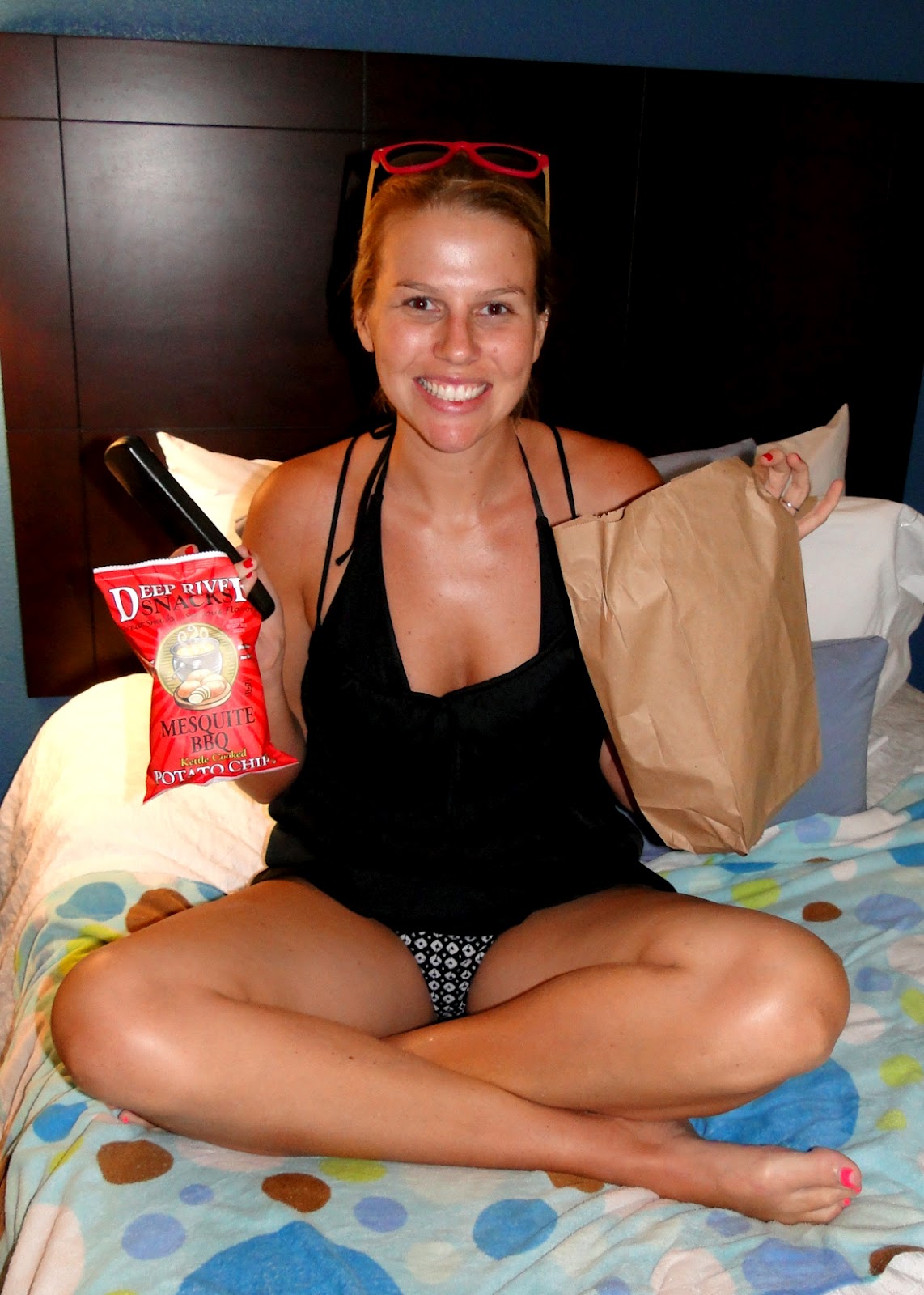 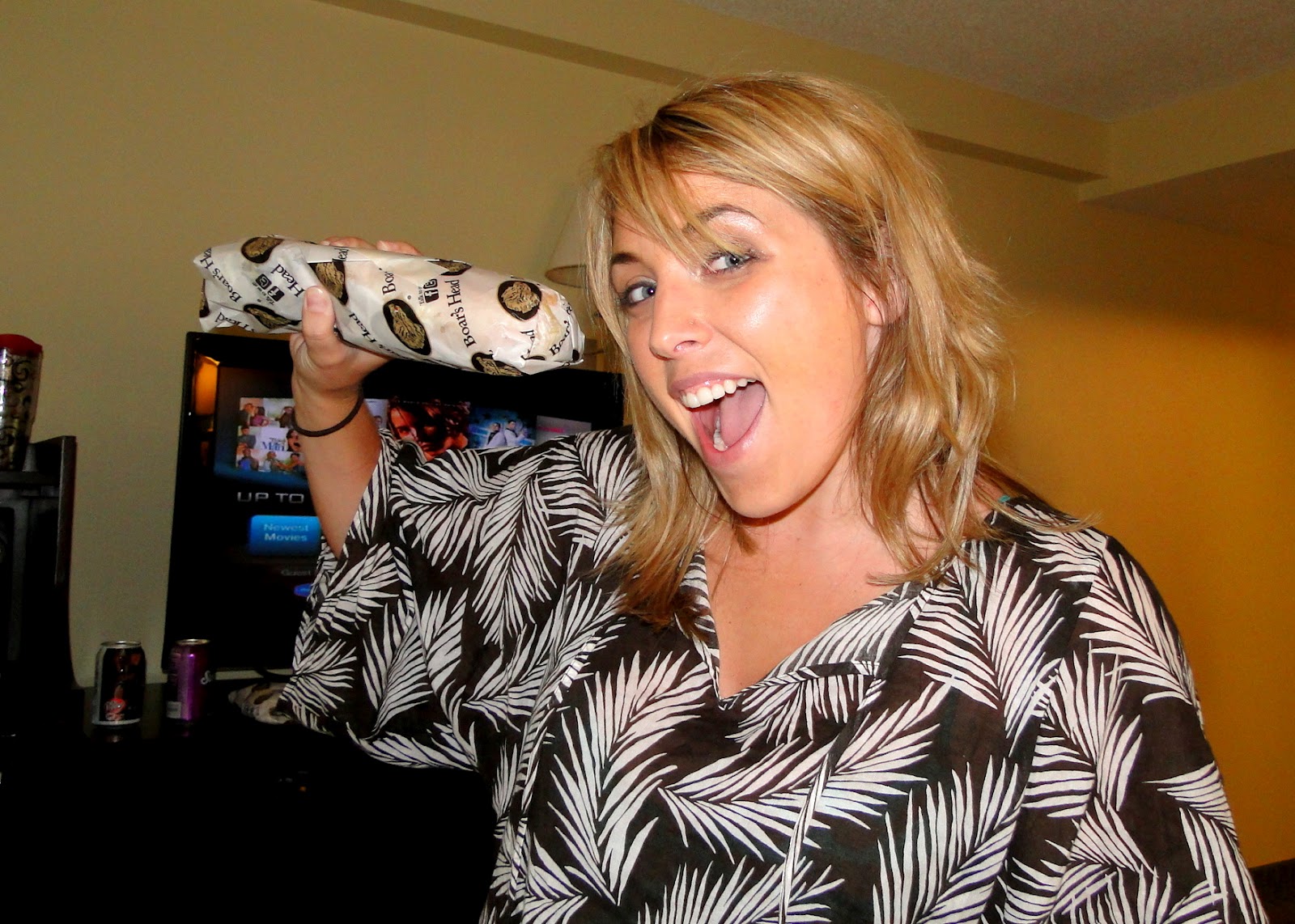 We ended up just going out to the pool for the afternoon. It was overcast and ended up raining on us but we just lounged and talked some more 😉 And watched as our spotted sunburns started showing up from our slack sunscreen applications that morning!!! It’s easier to slather a kid with sunscreen than it is yourself ya know it?

We all took showers and I pumped again before heading out to dinner. I told them there were TWO places I really, really loved that were both located in Jacksonville but that I was NOT going to say them out loud because I knew it’d be impossible for me to stick to my Challenge at either restaurant. (Maggiano’s and Cheesecake Factory were the places I was thinking of…they figured them out but we all agreed to try somewhere else instead!) We ended up eating at Mitchell’s Fish Market. SO random, I’d never heard of it before and neither had anyone else. It was on the pricey side (at least for us) but it was SO GOOD!!! And I was able to order some grilled chicken with a yummy cream sauce and amazing asparagus 😉 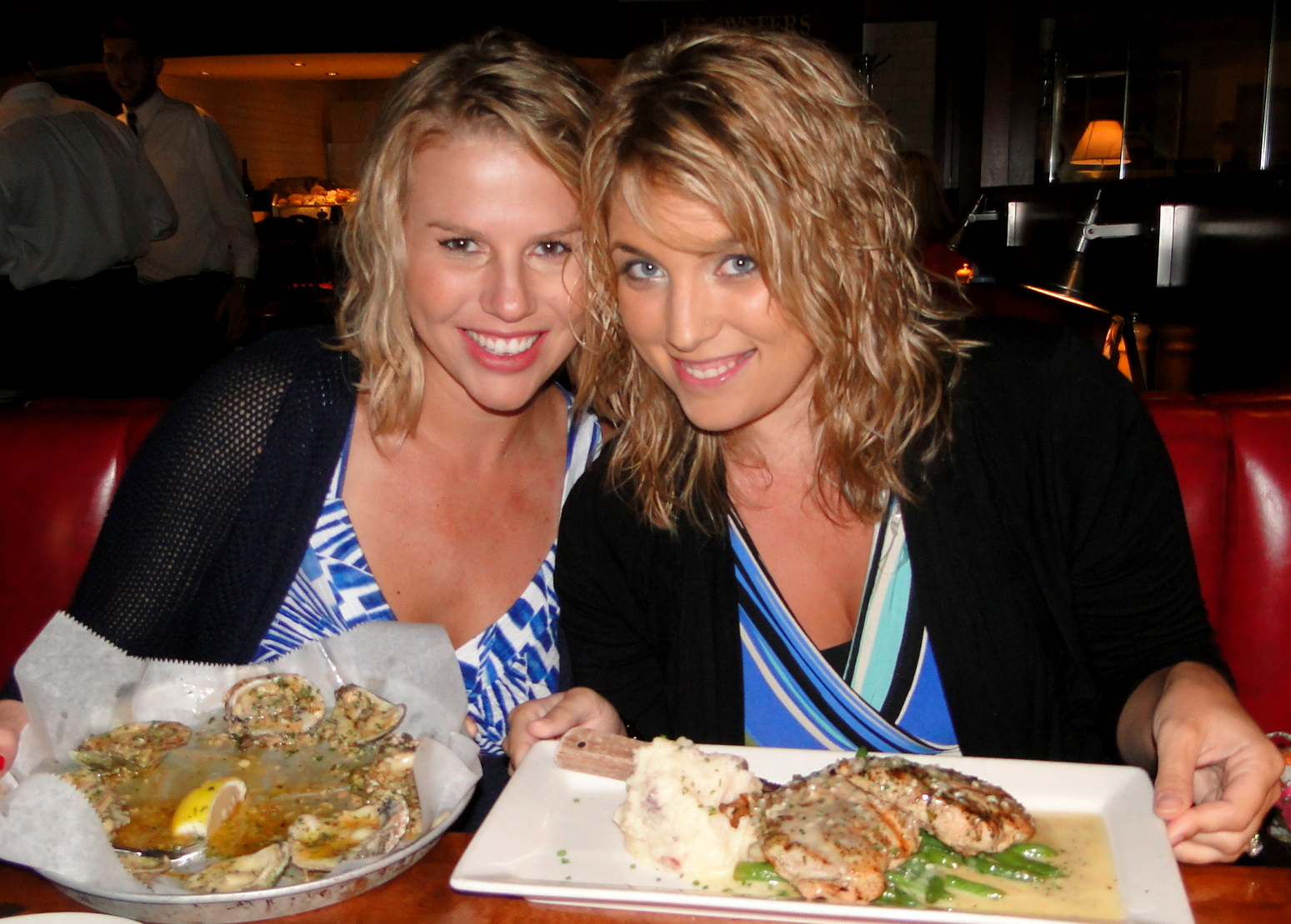 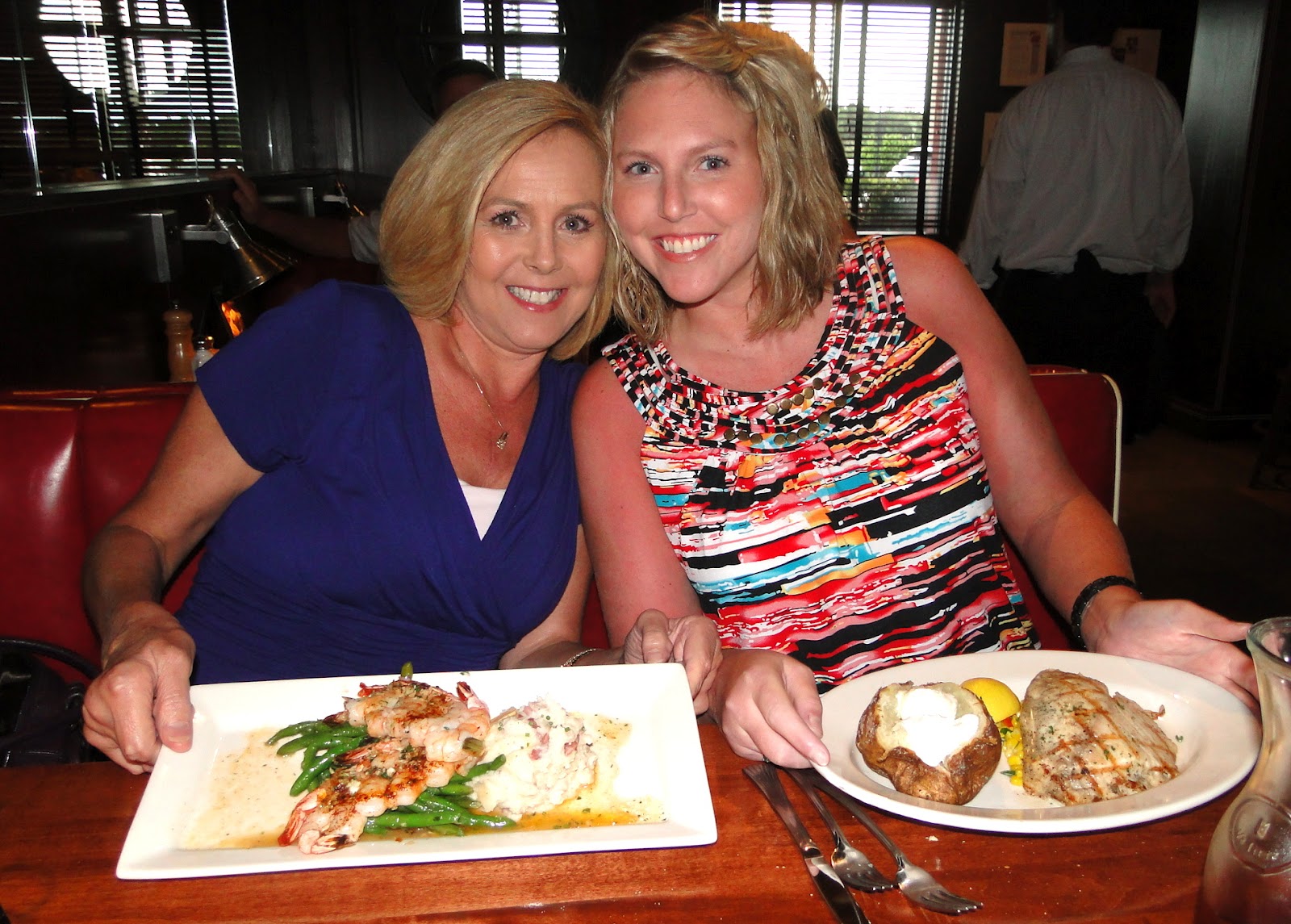 Crunk for the pie… 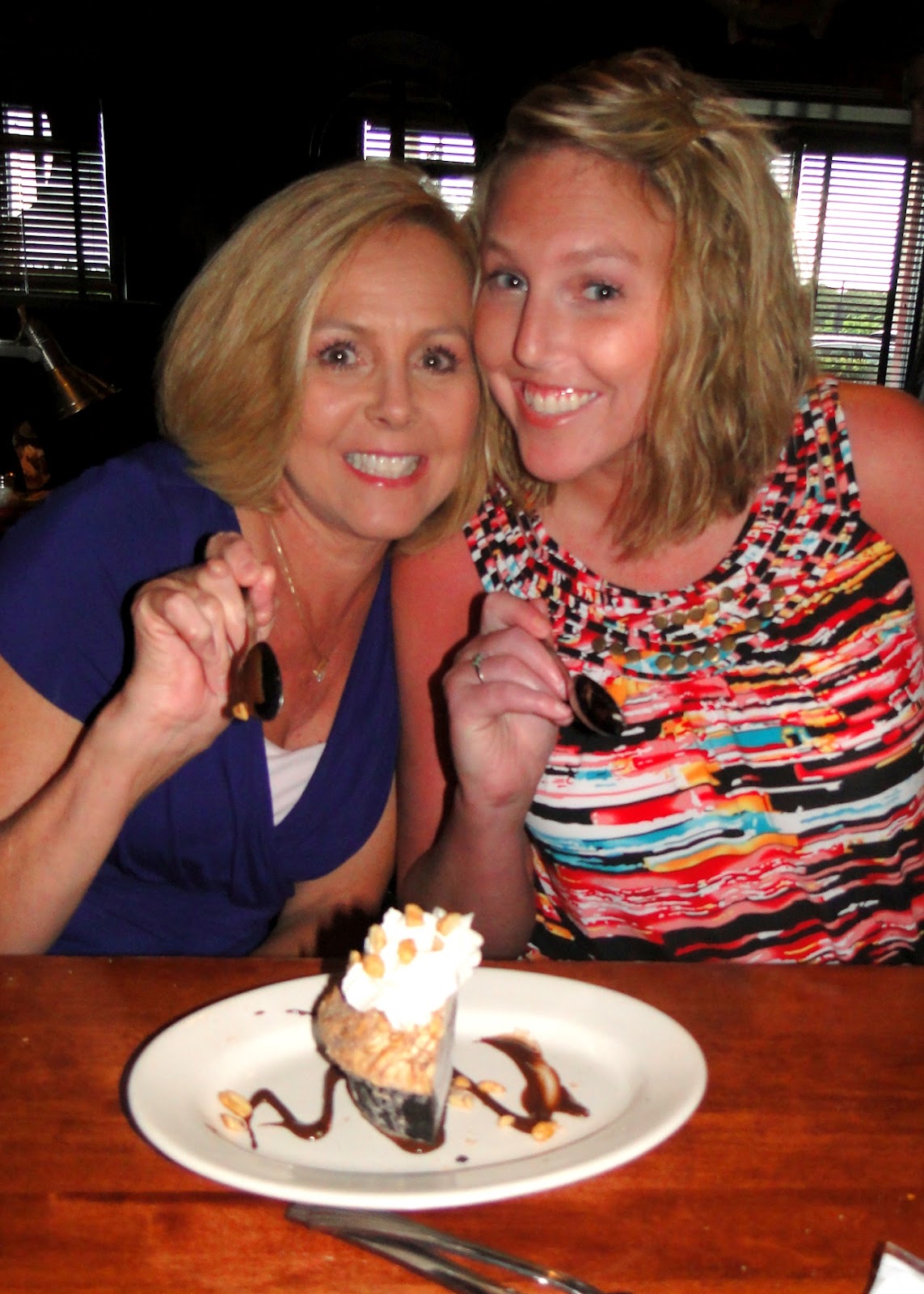 It was DELICIOUS. I want to take Zach there even just for the dessert!!! 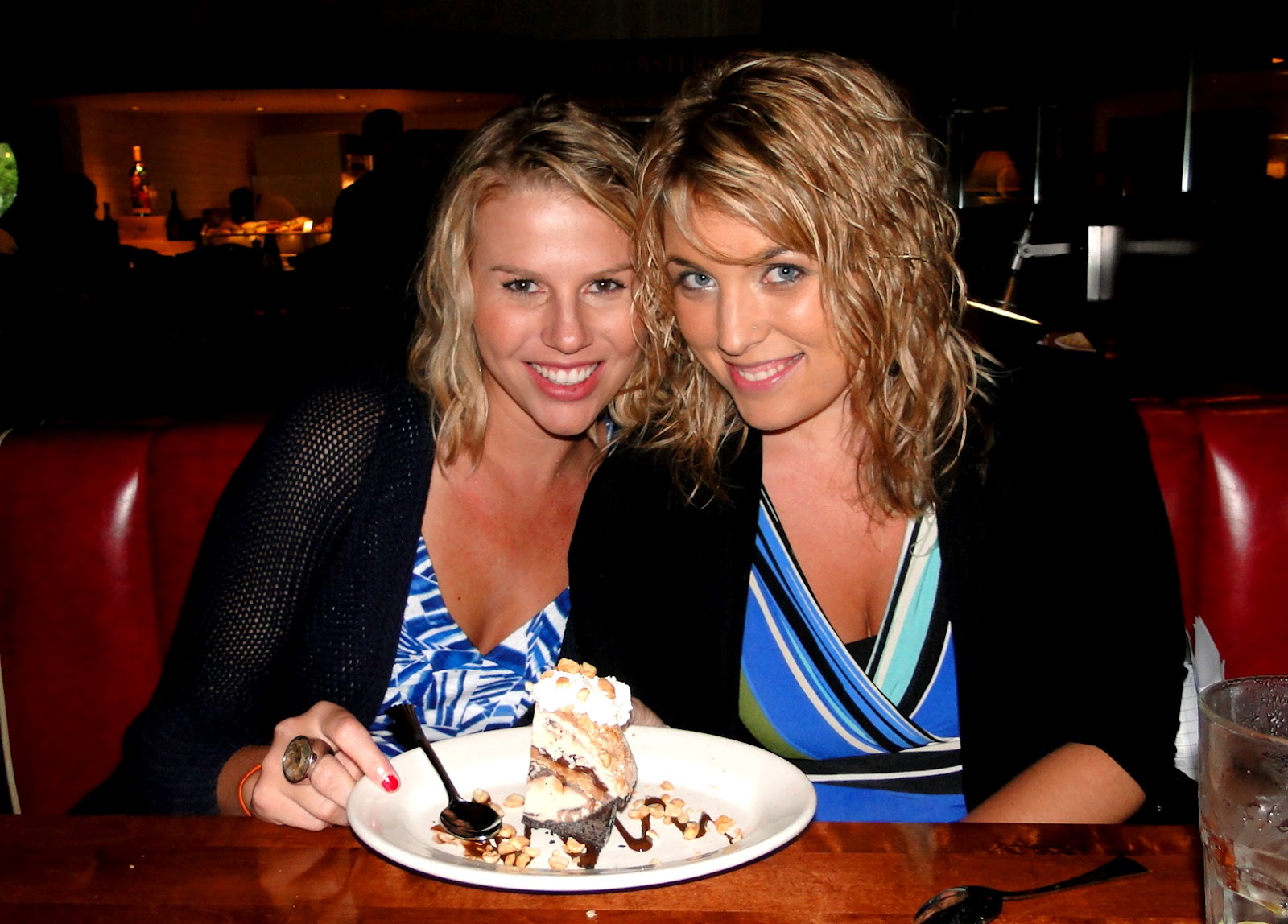 After eating we buzzed in a few shops. For Mother’s Day we all pitched in and bought Mrs. Charlotte a family photo session with Captured By Colson. We booked our session for August and needed to find coordinating outfits for everyone to wear. It was OUR MISSION on the trip to get it all figured out and it was pretty fun hunting for things that coordinated. We went in Forever 21 that night and found quite a few things but the mall area was closing down so we decided to come back the next morning.

More late night talking and sleeping-in the following morning occurred 😉 We took our time loading up and checking out of the hotel then headed back to St John’s to do more shopping. We found some great deals at Dillard’s for the guys golf shirts and ate lunch at Panera (I resisted the temptation to get the 99 cent pastry add-on!!!) before hitting up the rest of the stores. We ended up finding EVERYONE something to wear for the pictures. That’s 14 people!!! HUGE accomplishment!!!

We didn’t leave the mall until 5ish and I pumped in a Starbucks bathroom while they sipped some coffees (worked out great because I wasn’t tempted to order anything since I was pumping haha) before we headed back home. We had worship service on the way back in the car and I always love small group worship. It always leads to some GREAT discussion!!!

While we were shopping Zach called and kinda whispered and asked me if everything was going okay. He wasn’t sure if he should ask since I was with everyone in case some drama had gone down or something. I laughed because it was a FLAWLESS weekend. Like legit, it couldn’t have been more wonderful. How blessed am I to go away with my mother in law and sisters in laws and truly have a great time?!?!? I know it’s SO rare and I’m so thankful for the relationships I have with them!!! None of us were in a hurry to get home…we didn’t want it all to end 😉

Mrs. Charlotte and I even talked about it later on how the four of us are all so natural together. We can joke around and pick on each other but in a loving way. We can share opinions, even if they differ, and that’s okay. We can ask if we look okay in an outfit we try on and know that the others will be completely honest with us about it. We can ask for advice and know the responses will all be from people with our best interests at heart. We can be our complete selves without worrying about someone judging us, gossiping about us later, or talking poorly about us to others. We can trust each other with anything and know that we all have each others backs.

Courtney, Casey and Mrs. Charlotte have always shared such a bond and relationship. They didn’t need me…they were just fine with things as they were before I came along. Yet they have welcomed me with open arms and have brought me into “the crew.” I am Courtney’s and Casey’s sister. I am Mrs. Charlotte’s third daughter. And I’m so thankful 🙂

Zach survived the weekend with both kids on his own…Jordan pretty much lived at our house the entire time too 😉 It was cute how pumped they were about “guy time” and Kye was all about it too! They had a great time and it was wonderful not having any guilt about going away for a couple of days. It was the perfect way to bring the summer to a close and I can’t wait for future girls trips like this with three of my favorite women!