Growing up we weren’t anything close to what I’d call a “football family.” We didn’t even watch it on Thanksgiving. I don’t remember ever watching a Super Bowl? It just wasn’t our thing. My parents are both from the North and I don’t think football is as important up there???

My Dad did graduate from FSU and loved the Seminoles. No, he didn’t watch every game. I don’t even remember him ever going to any. But he watched one game each season: FSU vs UF. And I have so many fond memories of that! If you have ever met my dad then you know when my dad likes something he goes all out. He has always been proud to be an FSU alumni and I grew up seeing Seminole stuff all over the place. He even wears an FSU ring 🙂

Naturally I was always an FSU fan myself. And when I graduated high school I attended FSU!  I grew up with a pure hatred for all things UF. I won’t wear orange and blue together. My dad even taught our dog, Christy, to urinate anytime he said “Go Gator.” Classic huh 😉 I always said I’d never be a “house divided” and one of the (many!) perks about Zach was that he was also a Seminole fan!!! It’s funny because his dad is a UGA guy, his uncle loves the Gators, and Jordan is a Ga Tech fan. So we have quite the mix of college football fans in the family! I’m glad I married the Seminole though, for sure 🙂

This past football season was so awesome. I didn’t watch a whole lot of the games myself, but I loved seeing ZACH so excited about the season. He became very obsessed with all things related to FSU football and was SO nervous each game. I really wanted to be able to find a way to get him to the National Championship game but once I found out that it was in California I gave up on that plan haha So instead he made plans for the night of the big game! He wanted to watch it with his best friends: Jordan and Mr. Rusty. That’s all he wanted! And he wanted to “do it big” and have a feast of food and he wanted it to be our treat to everyone! So sweet of him huh?

Although the kids didn’t stay up for the game, they were decked out hardcore in their gear. Britt insisted on wearing the jacket which was hilarious! She loves to run around the house and chant “Go Noles!”

I have a friend who is an Auburn fan and she sent me a picture of her daughter in Auburn stuff so I texted her back with these pics: 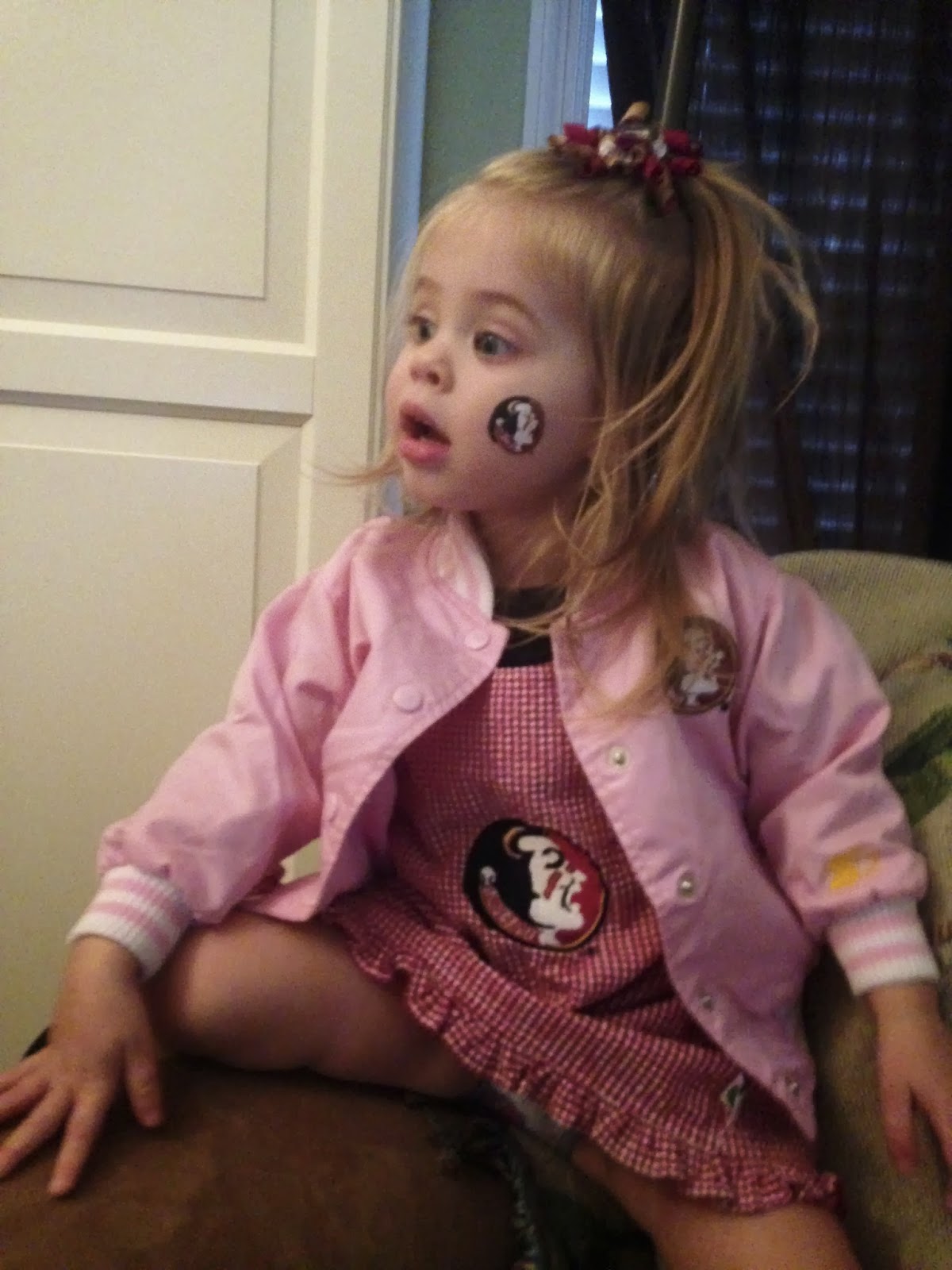 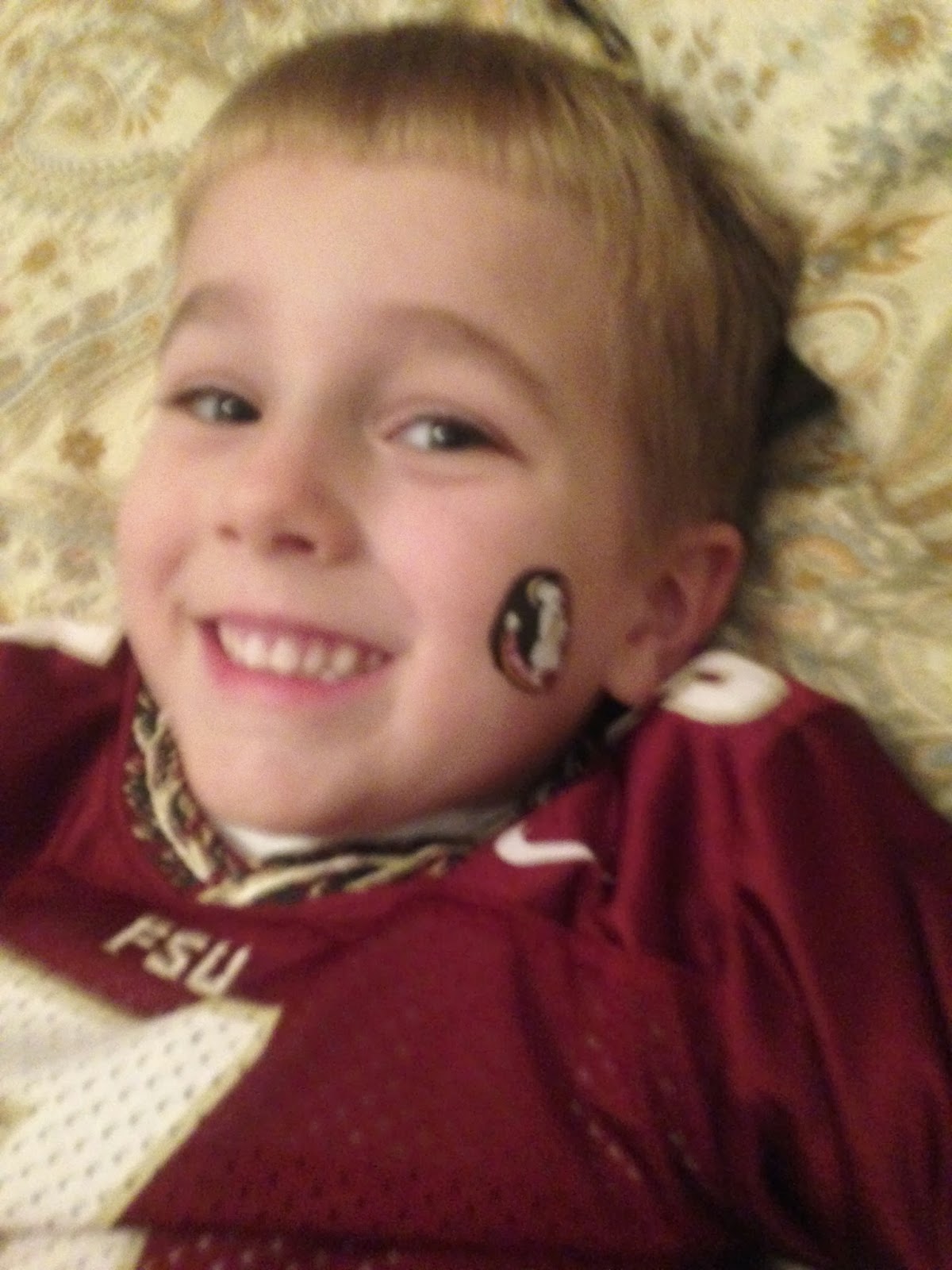 We did turn on the pre-game coverage and let them watch a little of that. But y’all I just have SUCH issues with tv programming. Commercials are so inappropriate and I’m not gonna let the kids watch stuff unless we are sitting there with them and are able to fast forwarded through the inappropriate stuff. So they didn’t see much haha. Zach wanted Kye to stay up and watch some of the game but he asks a LOT of questions and it was just too big of a game PLUS we were eating while watching and that added a whole different element of issues! So we put him to bed! 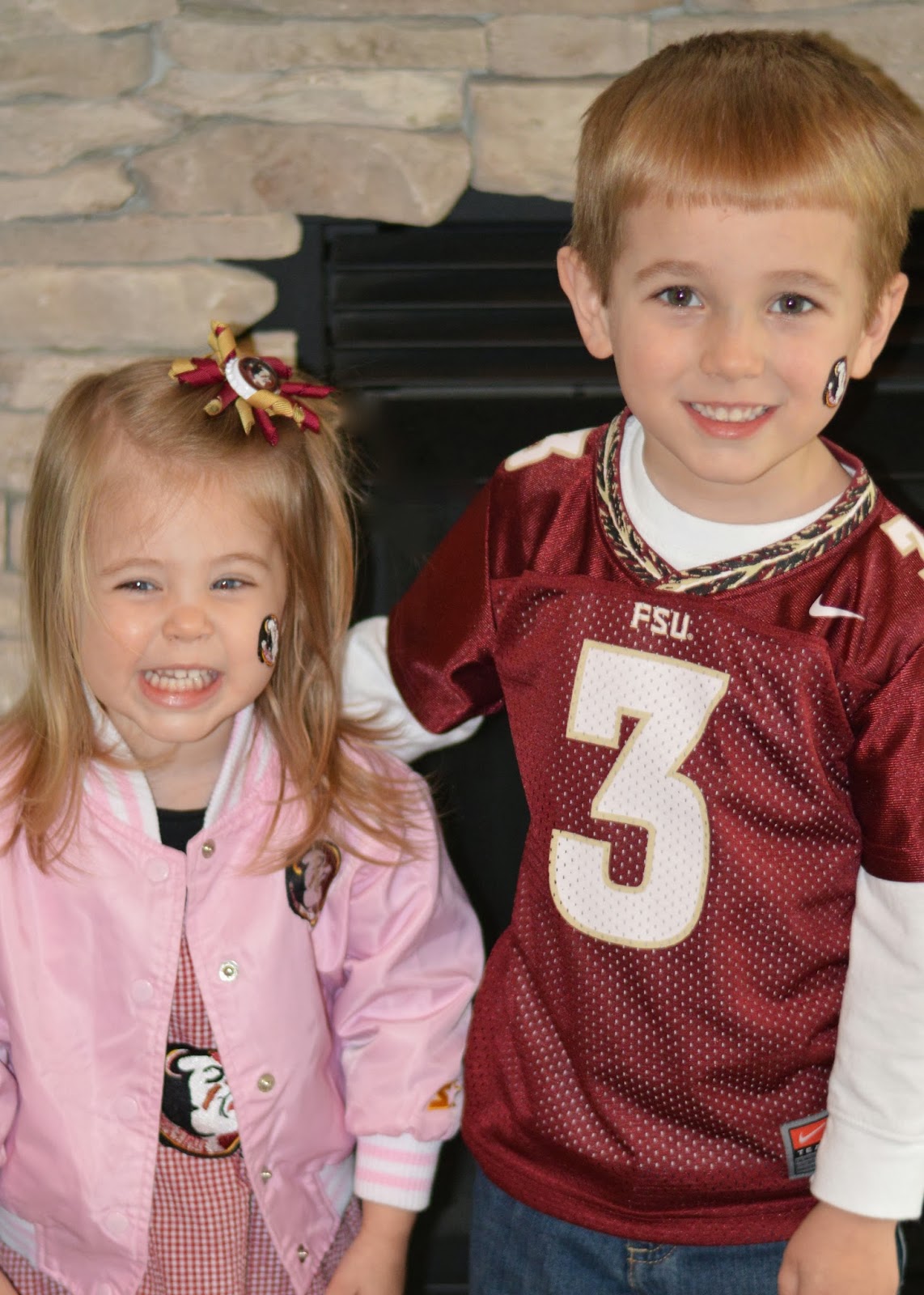 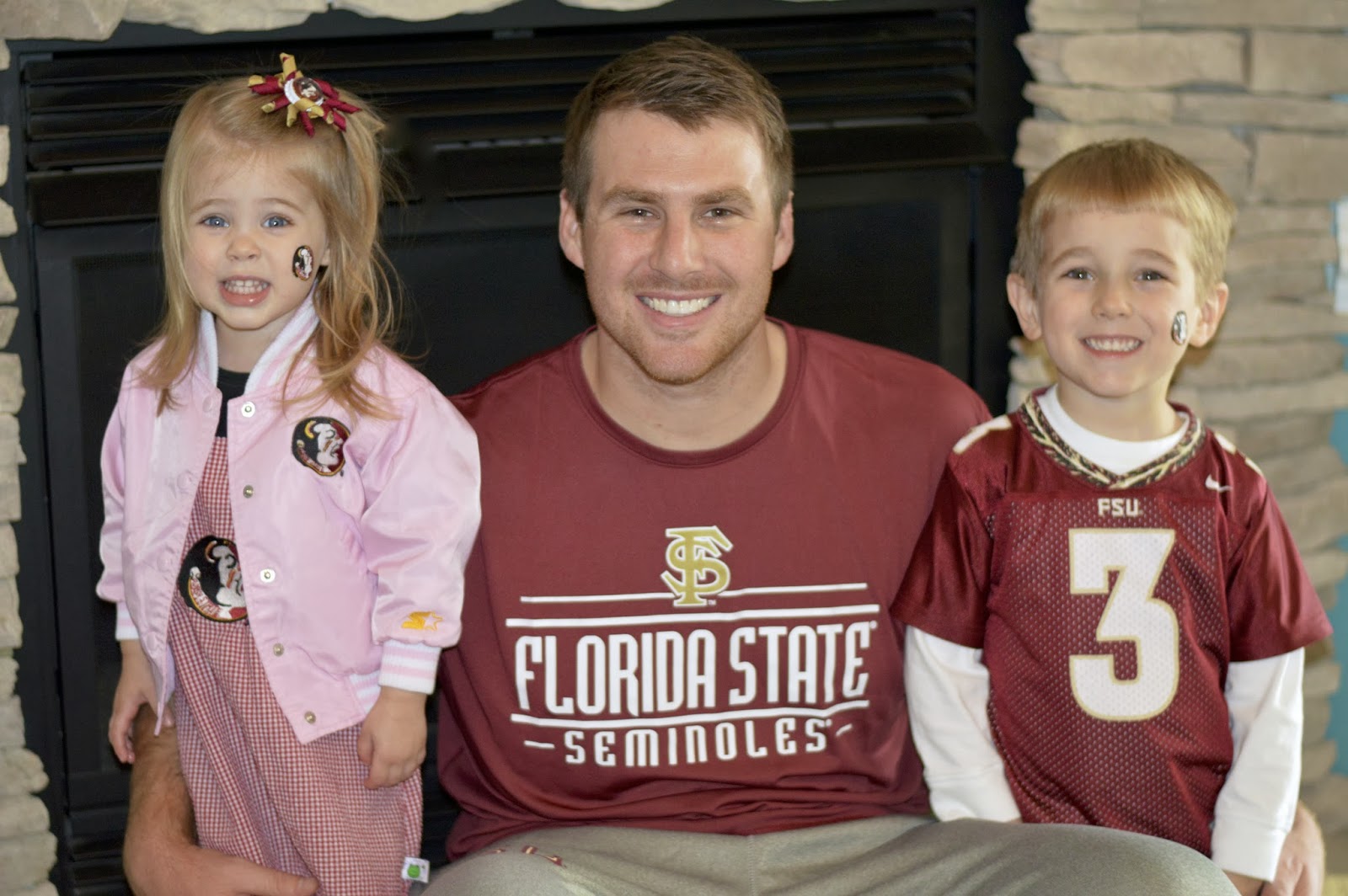 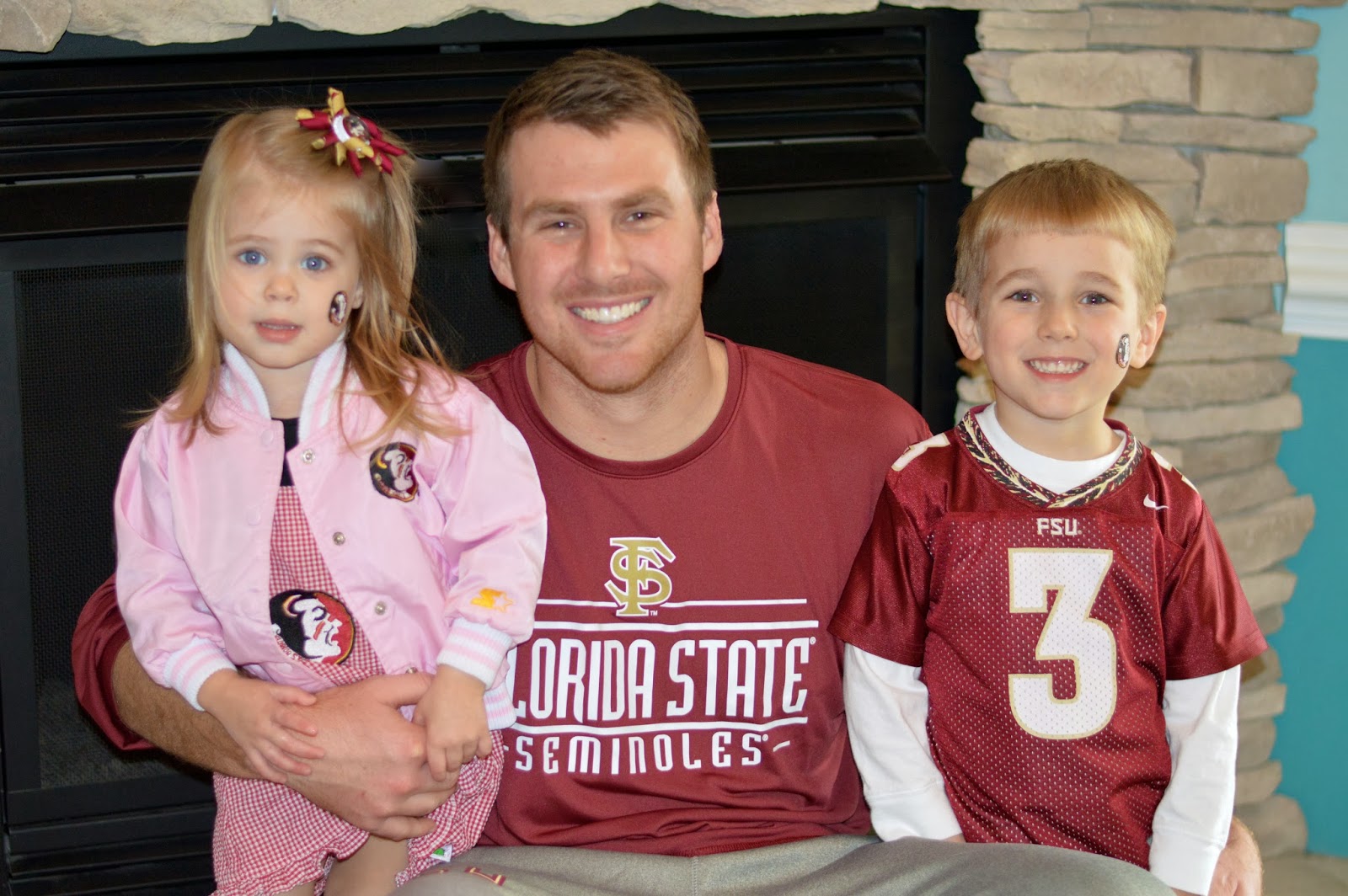 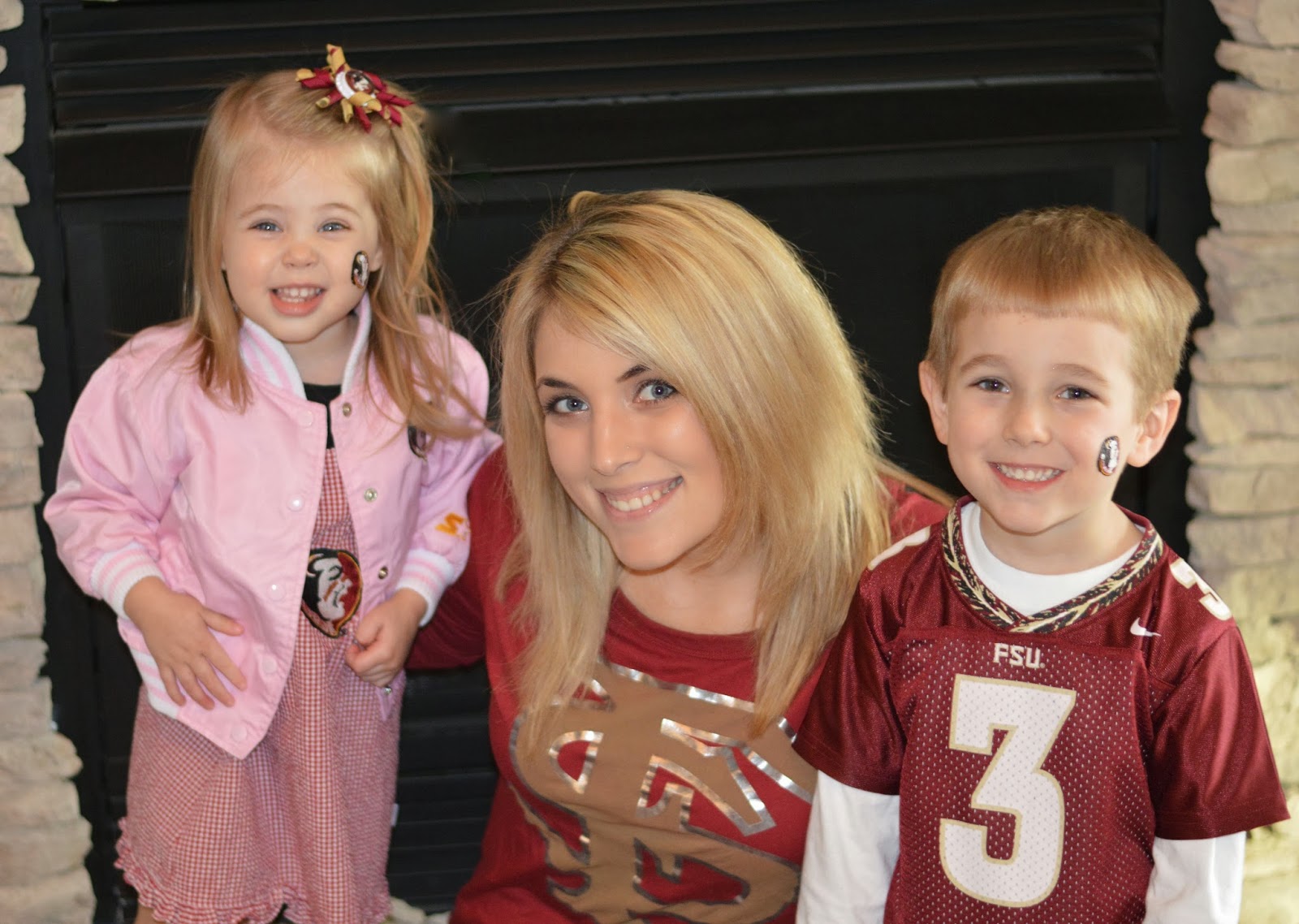 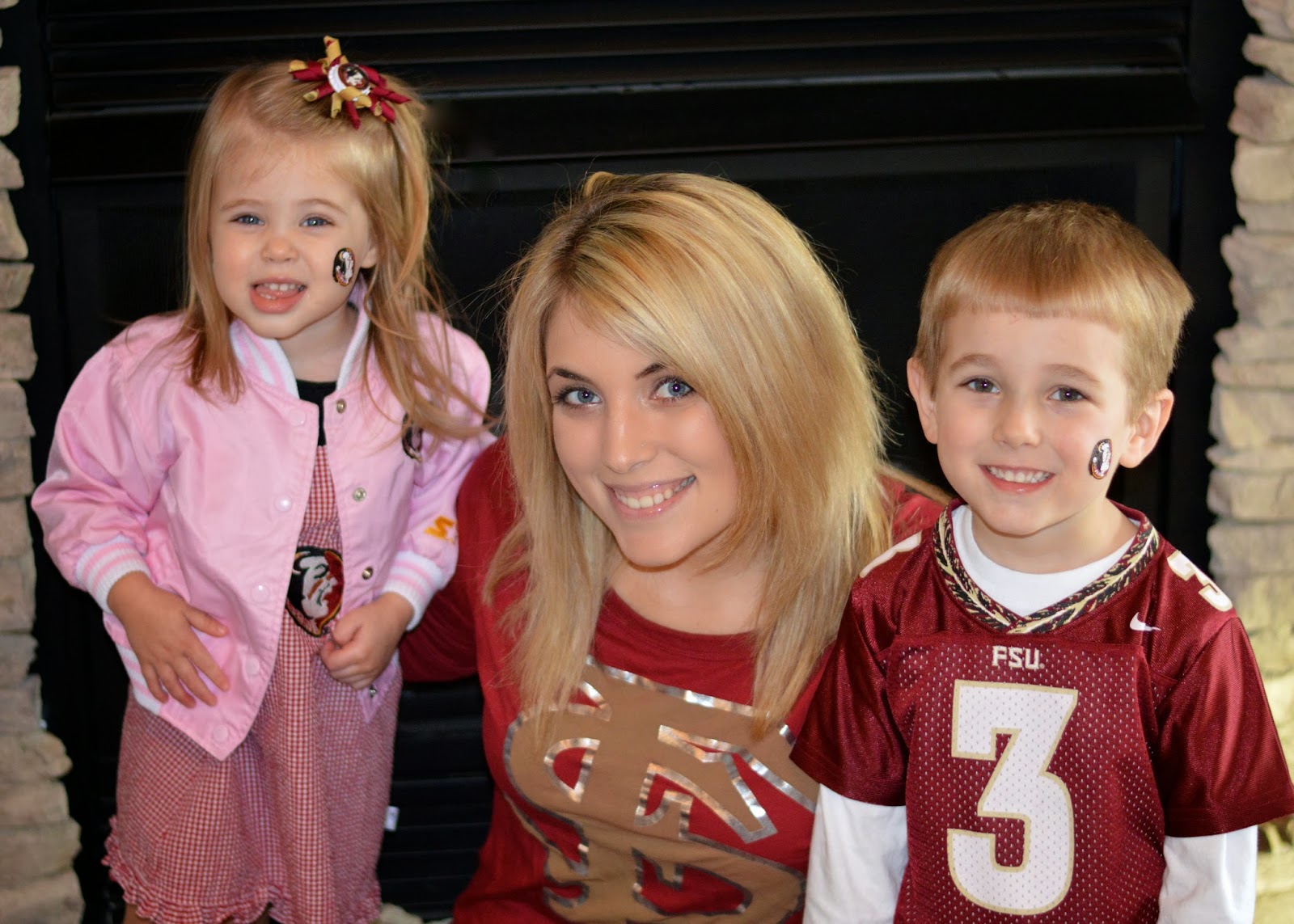 Mr. Rusty snapped a family picture for us before bedtime 🙂 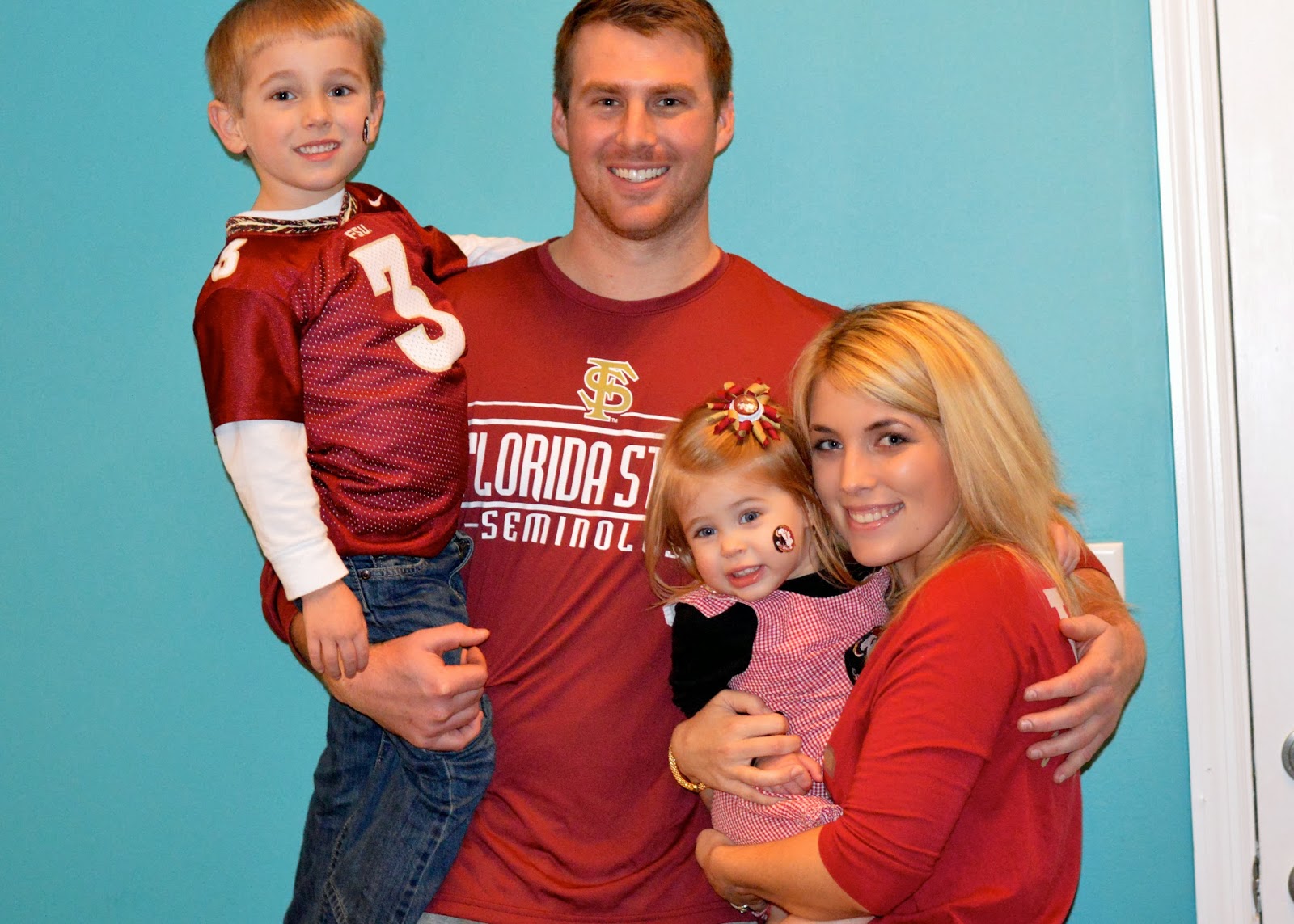 I didn’t plan to watch the whole game. It started SO late and I was still in my very tired phase of pregnancy…but oh my gosh that game!!!! How could anyone stop watching?!?! Mr. Rusty and Mrs. Charlotte did go home and totally regretted it!!! Even Casey, who goes to sleep at like 8 every night, couldn’t be torn away! It was AWESOME. Zach was so funny and literally jumped on our coffee table twice. I was freaking out worried that it would break!

We were so pumped after the game that we had a hard time falling asleep too. Def an epic ending to an amazing season! I know it’ll be a tough act to follow next year but I’m hopeful! And no matter what…we are ALWAYS Seminoles 🙂 Win or lose! 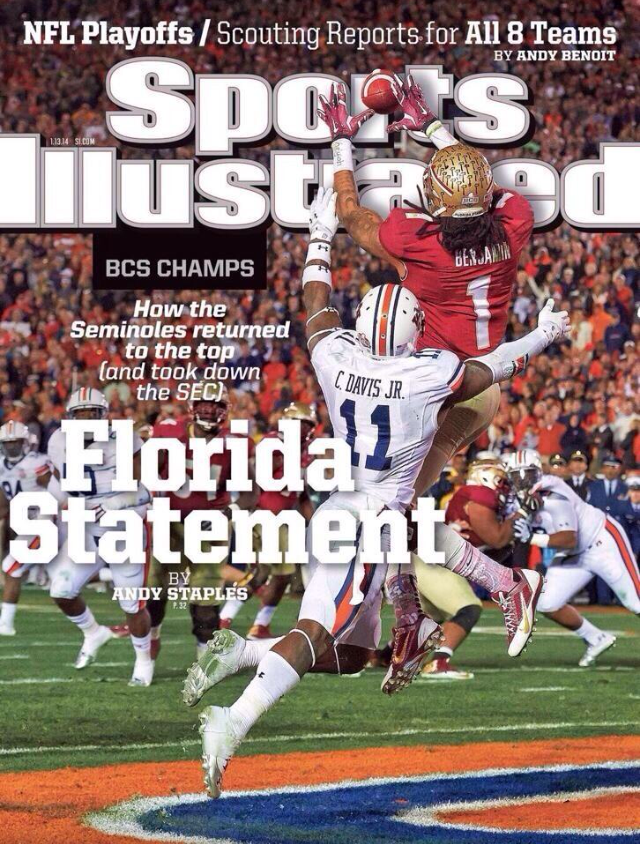