A couple of months ago I blogged about Kye’s backyard toys and we really don’t have very many of them. Most of the time when we play outside we go out front (assuming I’m looking halfway decent that day haha). Zach and I store most of Kye’s outside toys in the garage for easy-access and Kye and I enjoy playing in the driveway and the front yard often!

For Christmas, Big Papa and G-Mama got him his Cozy Coupe

and he LOVES it. So far I’ve still kept the bottom cover on it to keep him from being able to “peddle” with his feet. I’ve tried removing it a couple of times but he just doesn’t understand the concept yet and why ruin good shoes? Here’s a video of his first love with the Cozy Coupe, just climbing in and out of it! The other day when I was loading everything into the car to go somewhere I said “let’s get in the car” and he ran to his Cozy Coupe, got in, shut the door, and waved bye-bye to me then started turning the wheel. Poor kid was getting nowhere fast! Other than just climbing in and out of it Kye also enjoys it when we push him or just pushing and pulling it around the yard on his own (here’s a video of that). It’s one of my favorite outside toys that we have…partially because I had one as a kid and it’s just a must ya know? 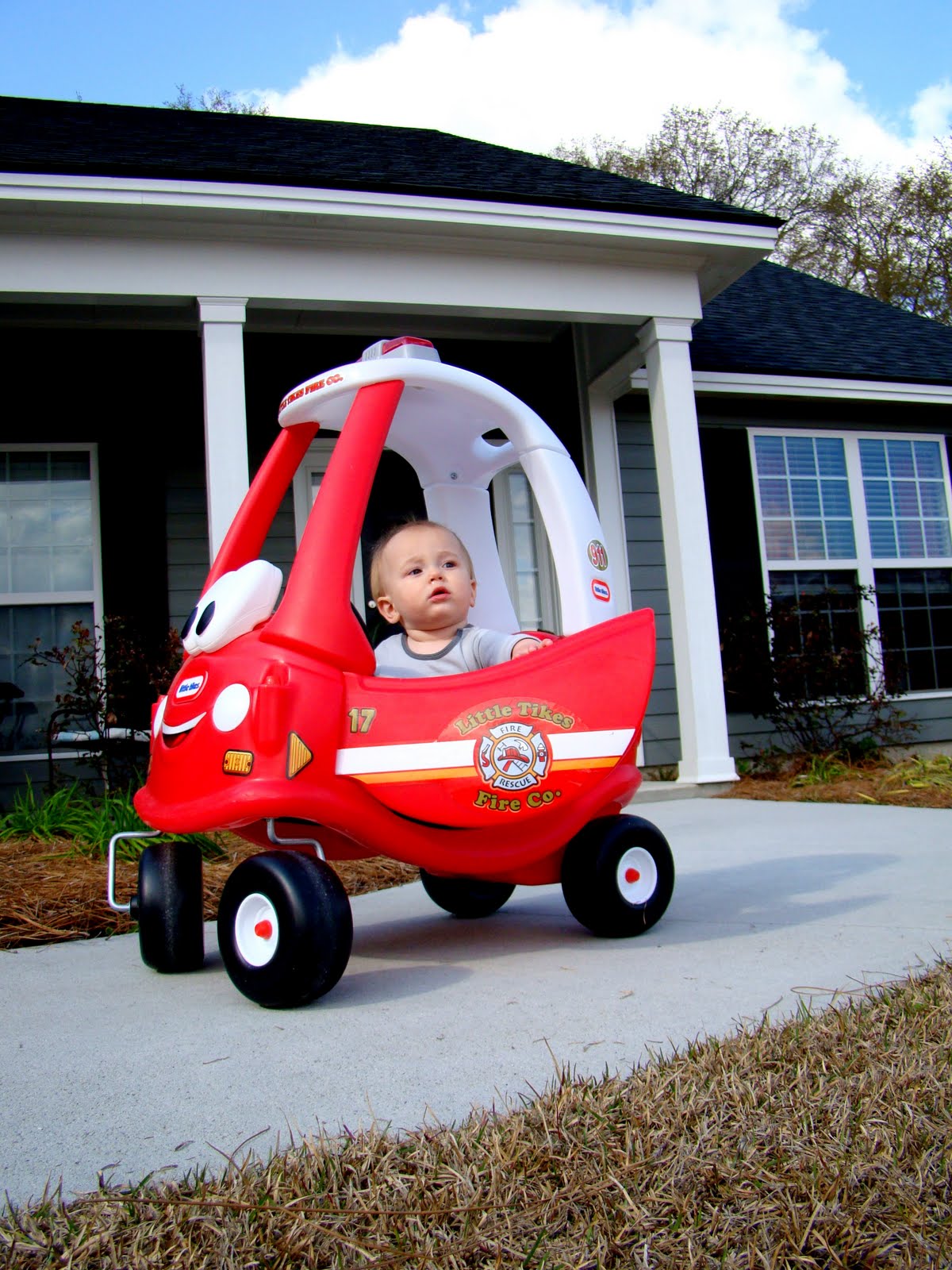 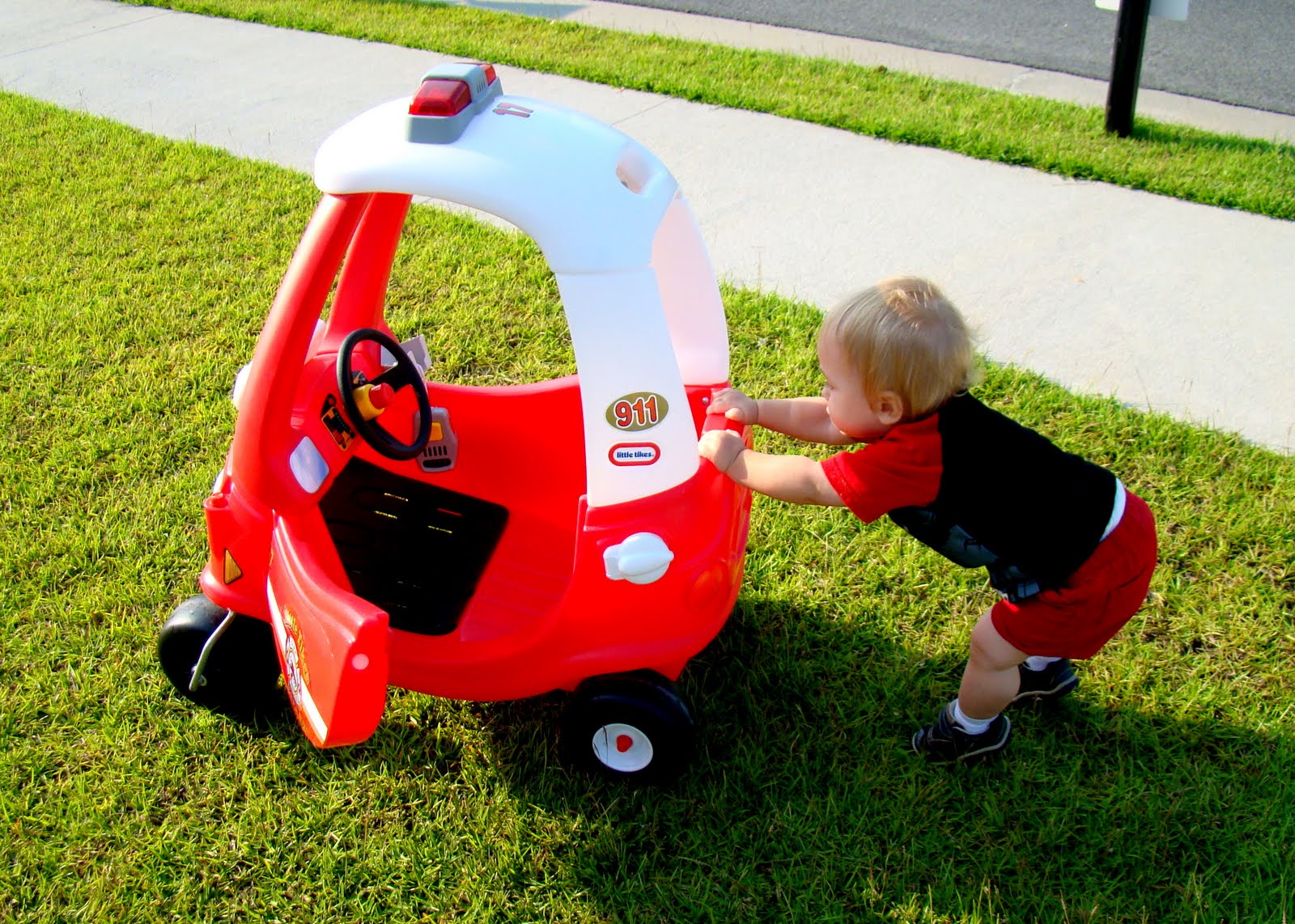 I’m a BIG fan of Little Tikes. Back when I was pregnant we went through all my childhood toys that were stored at my dad’s house and all the Little Tikes ones held up the best (if we have a girl someday I totally still have my stroller

in great shape!). Once we saw how great my stuff held up we decided to invest in Little Tikes stuff for our baby whenever possible. Other than the Cozy Coupe Kye also has the lawn mower

all by Little Tikes. We use all of these toys out front to play. I think out of all of them he will get the longest use out of the trike bike (which is good as it was the most costly!). I like the mower the least as it took him FOREVER to be able to use. Now that he can use it (it’s top heavy so even an earlier walker has a hard time pushing it as it’ll fall over easily) he LOVES it and it’s great because it’s an easy one to take with us on a trip since it’s lightweight and rather small (here’s a video of Kye with his lawn mower). Duh, he loves the golf clubs but I wish they were more realistic. They are much thicker than real clubs and therefore Kye prefers Daddy’s over his own.

The bike is great for walks and someday he’ll be able to peddle on his own! 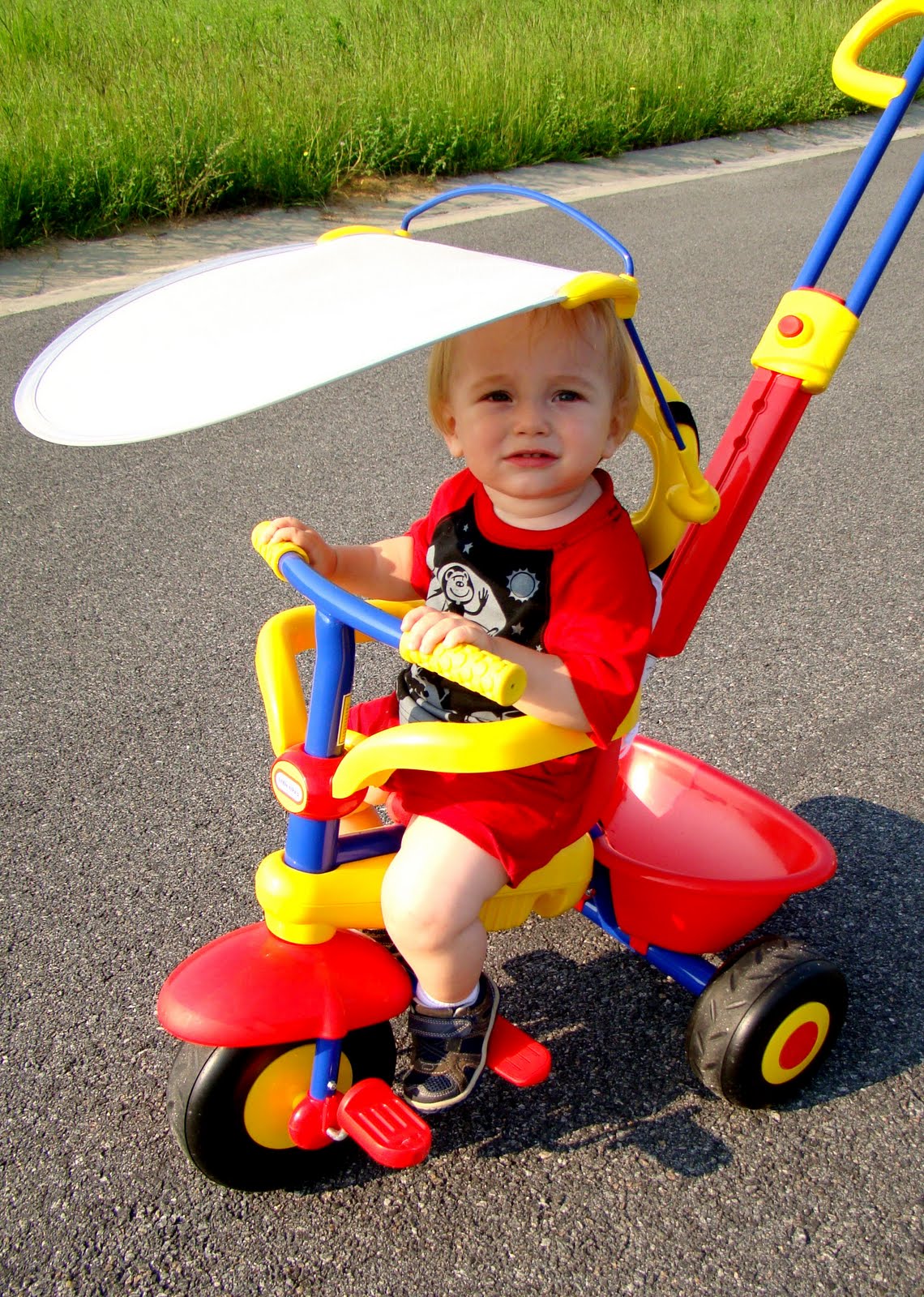 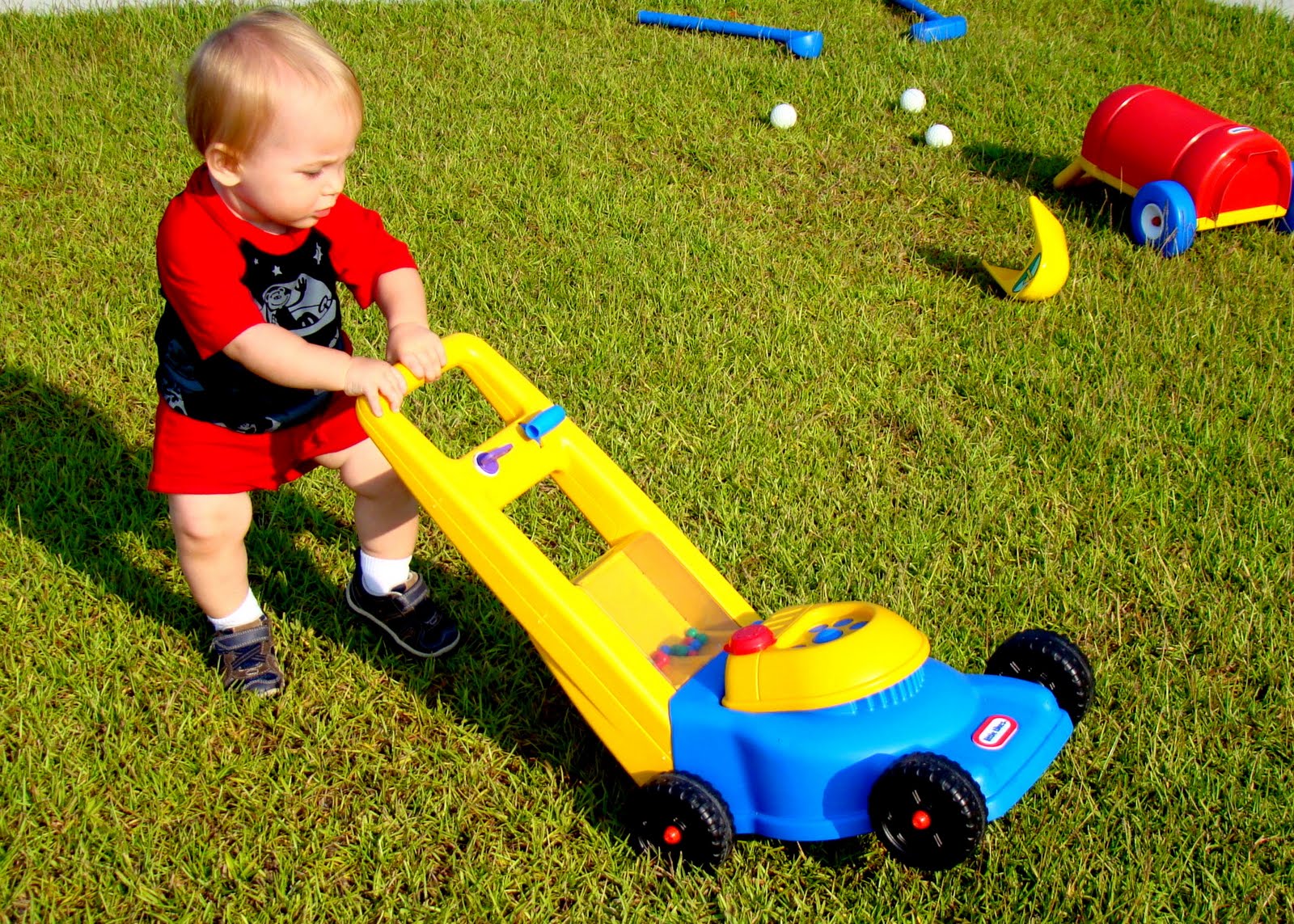 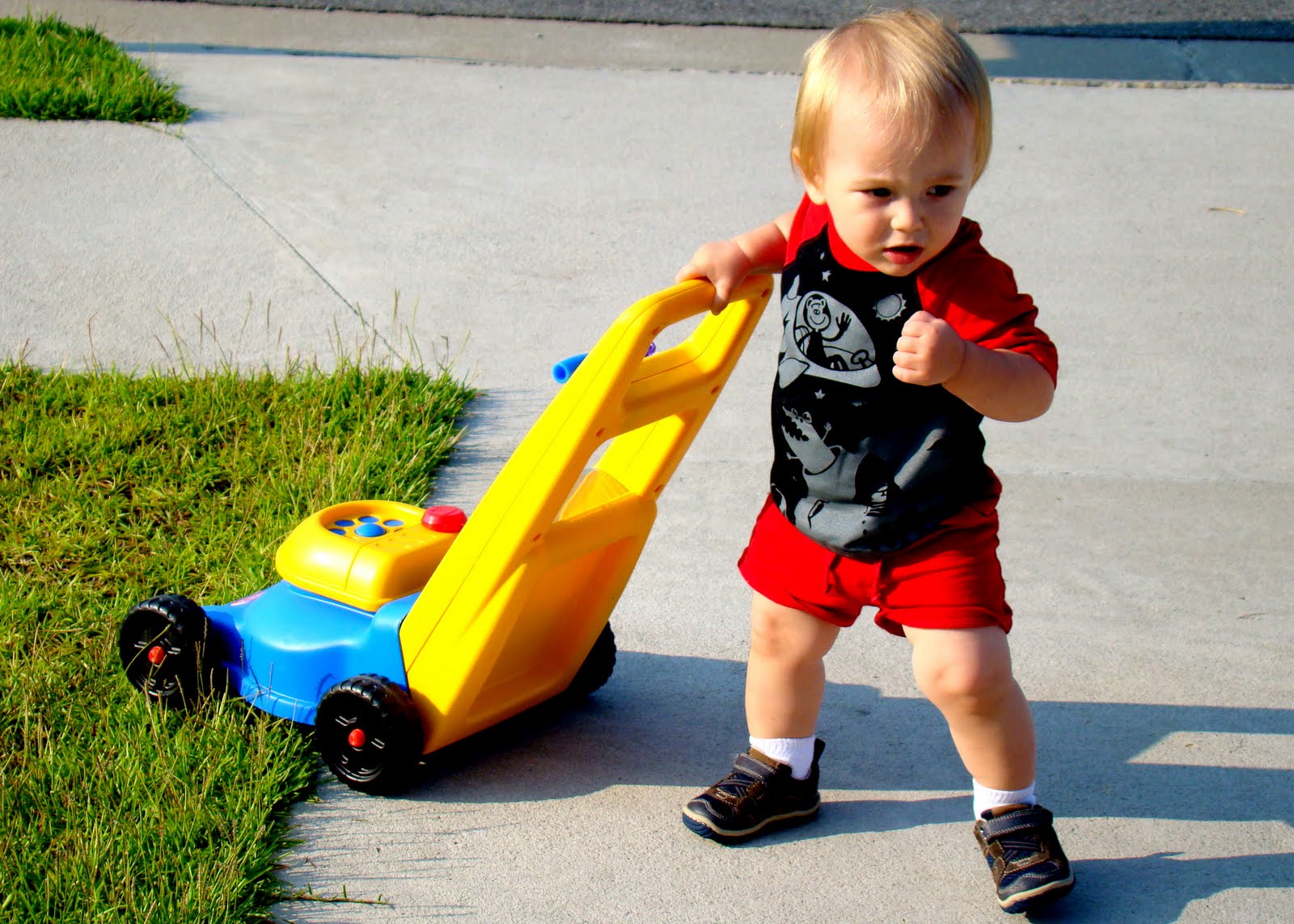 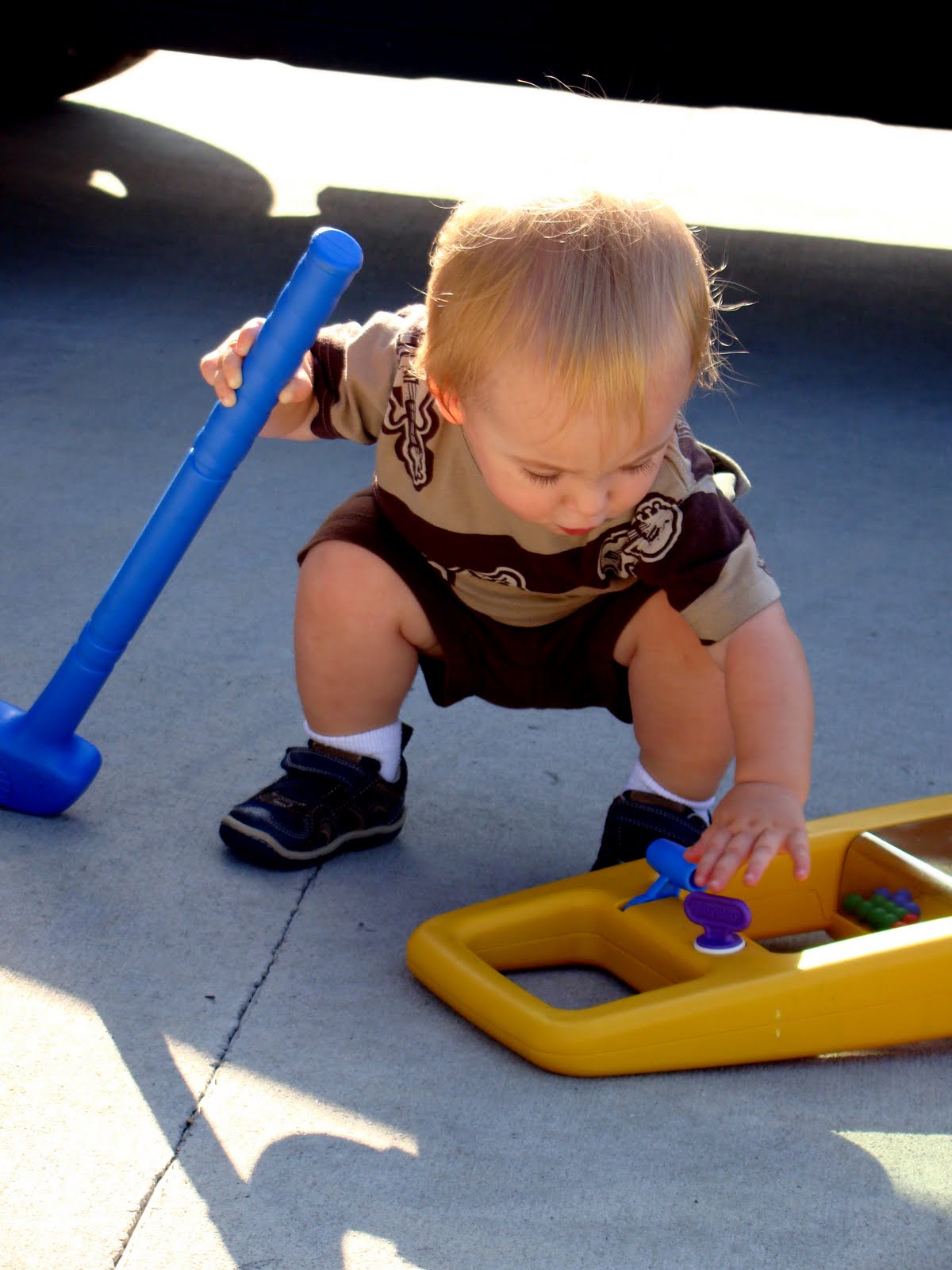 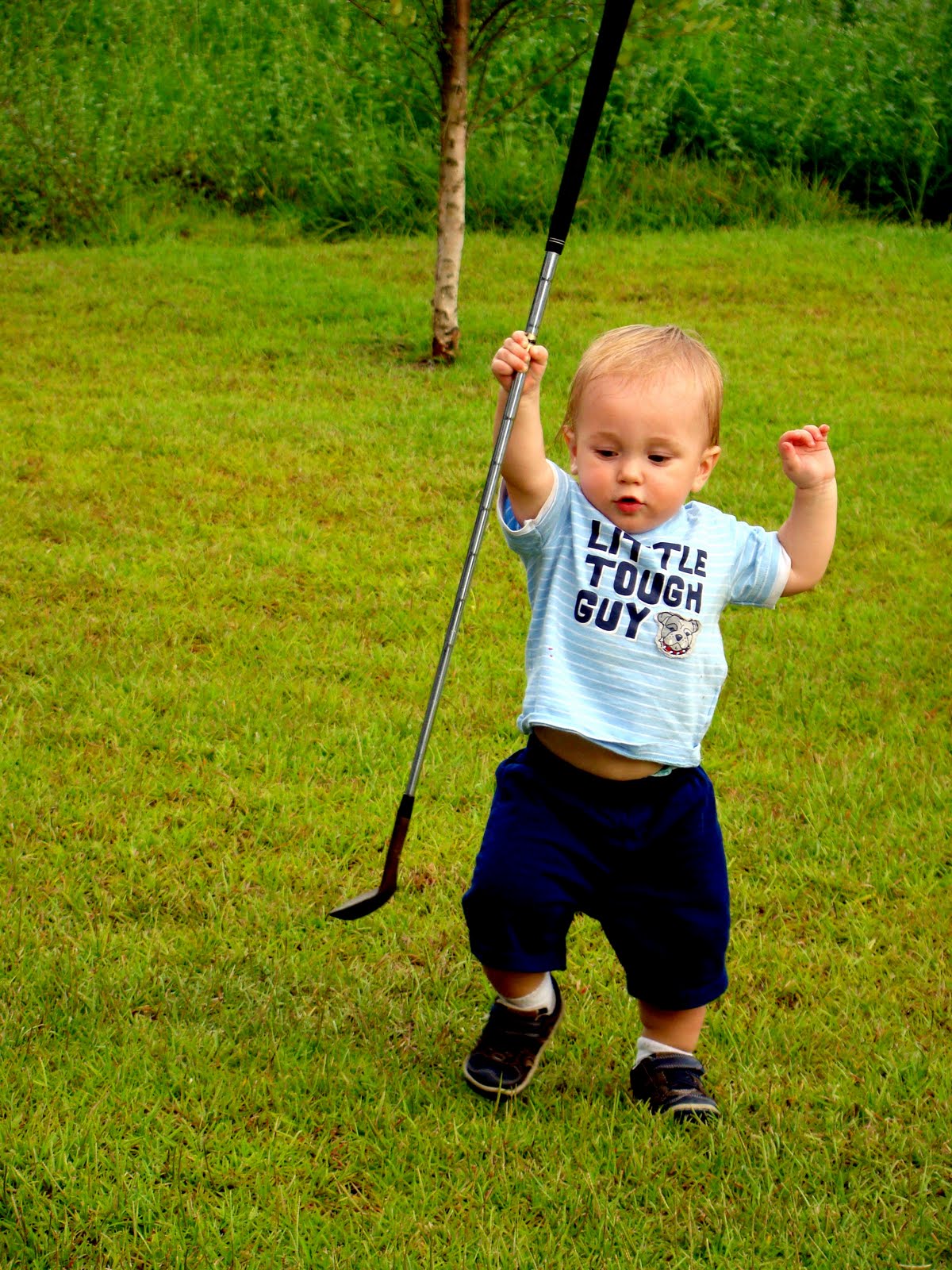 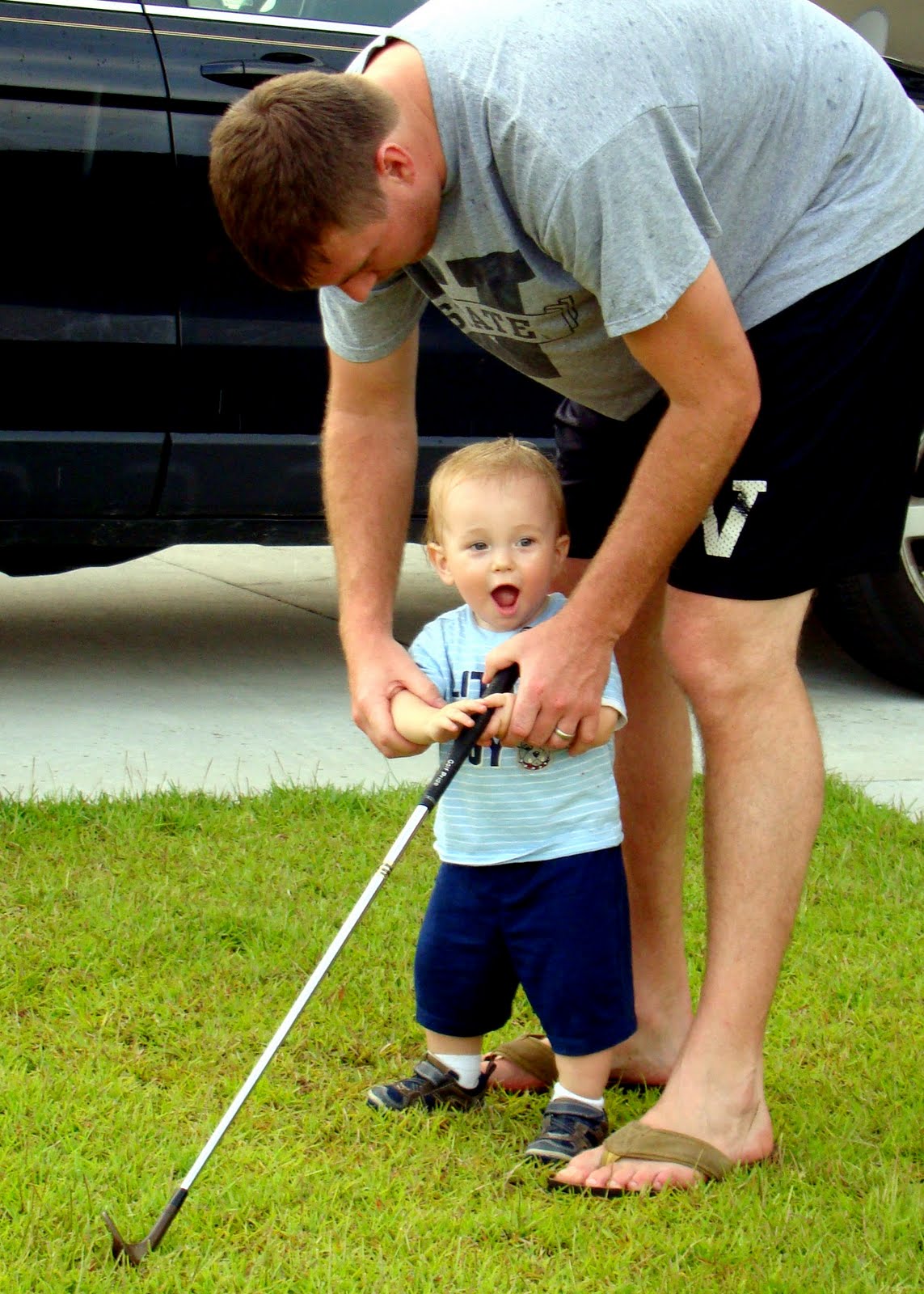 For Christmas, Gramma got Kye his Tonka ride and push

truck. For a long time we kept it inside but it eventually made it’s way into the garage with the other out front toys. He still doesn’t sit on it and scoot himself much but I think that’s because I’ve kinda hijacked the steering wheel and made it a car toy (it’s the PERFECT car entertainment!). I need to put it back on so he can play with it properly but he has enjoyed pushing it around and I like that it’s sturdy (MUCH better than the lawn mower for sure!). I also like that he can store things in the bottom of it as kids this age love to put things in and out of storage compartments. Here are three different videos of Kye using his Tonka truck (video 1, video 2, video 3). We took so many because it was the first toy he could push and walk behind so we were pretty pumped about it 😉 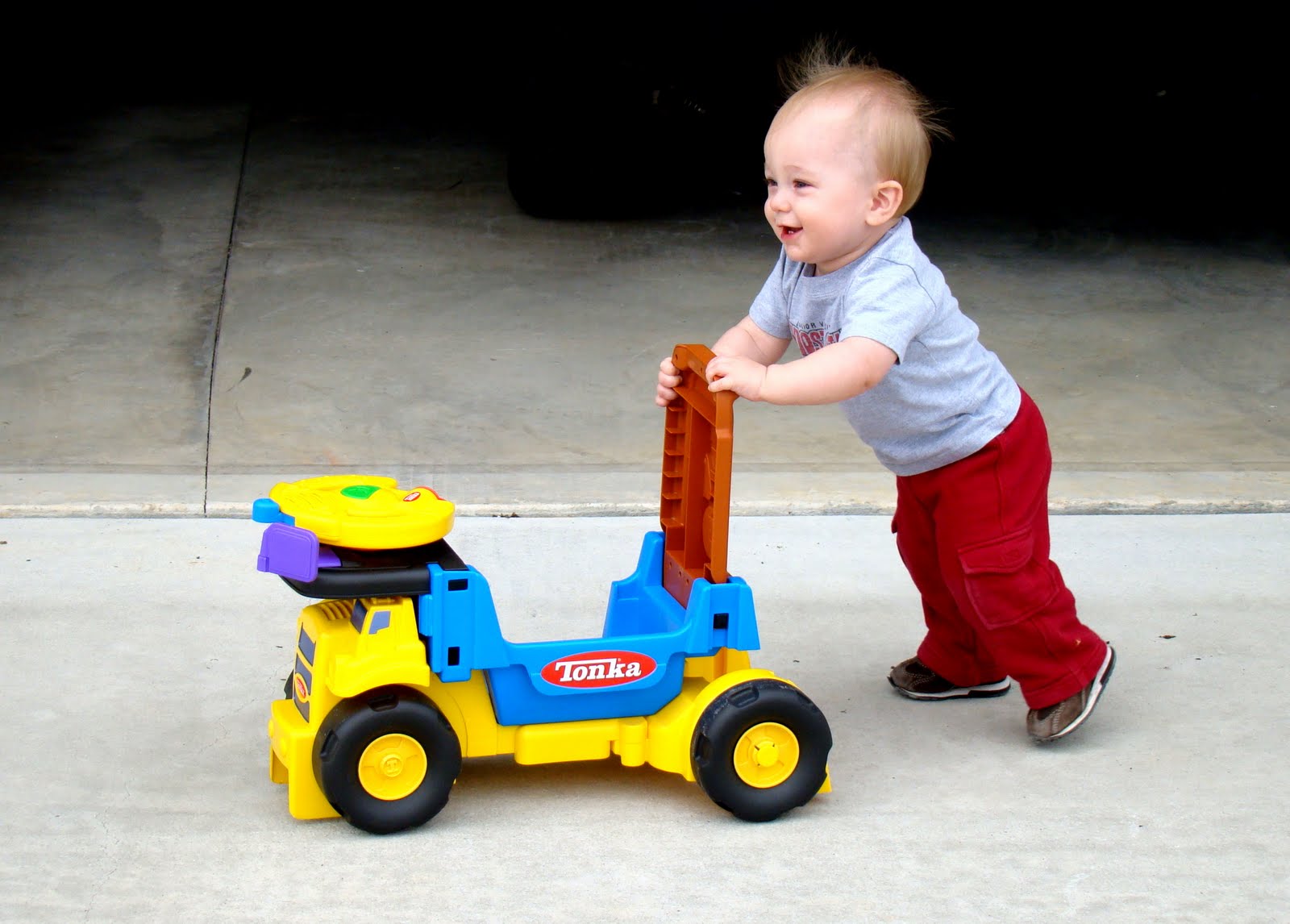 The hardest part of playing in the front yard is establishing the boundary line. I decided to let Kye play all over the yard and driveway (and our sidewalk) up until he gets to the edge where the sidewalk or driveway meet the road. That’s his boundary line and he does an AWESOME job of not crossing it! He’s literally only crossed it once. I just have always told him that he’s not allowed to go past it and have always made sure his toys don’t go past it and he seems to understand. The other day he was playing with a basketball while I was loading up the car and I guess the basketball got away from him as when I turned around it was in the road and he was standing RIGHT at the edge staring at it. I ran to him and showered him with praise! When we move our lot will be on a busier street in the neighborhood and I’m thankful that he already understands boundaries so that transition will be (hopefully) a smooth one 🙂

watching to make sure he doesn’t cross the line! 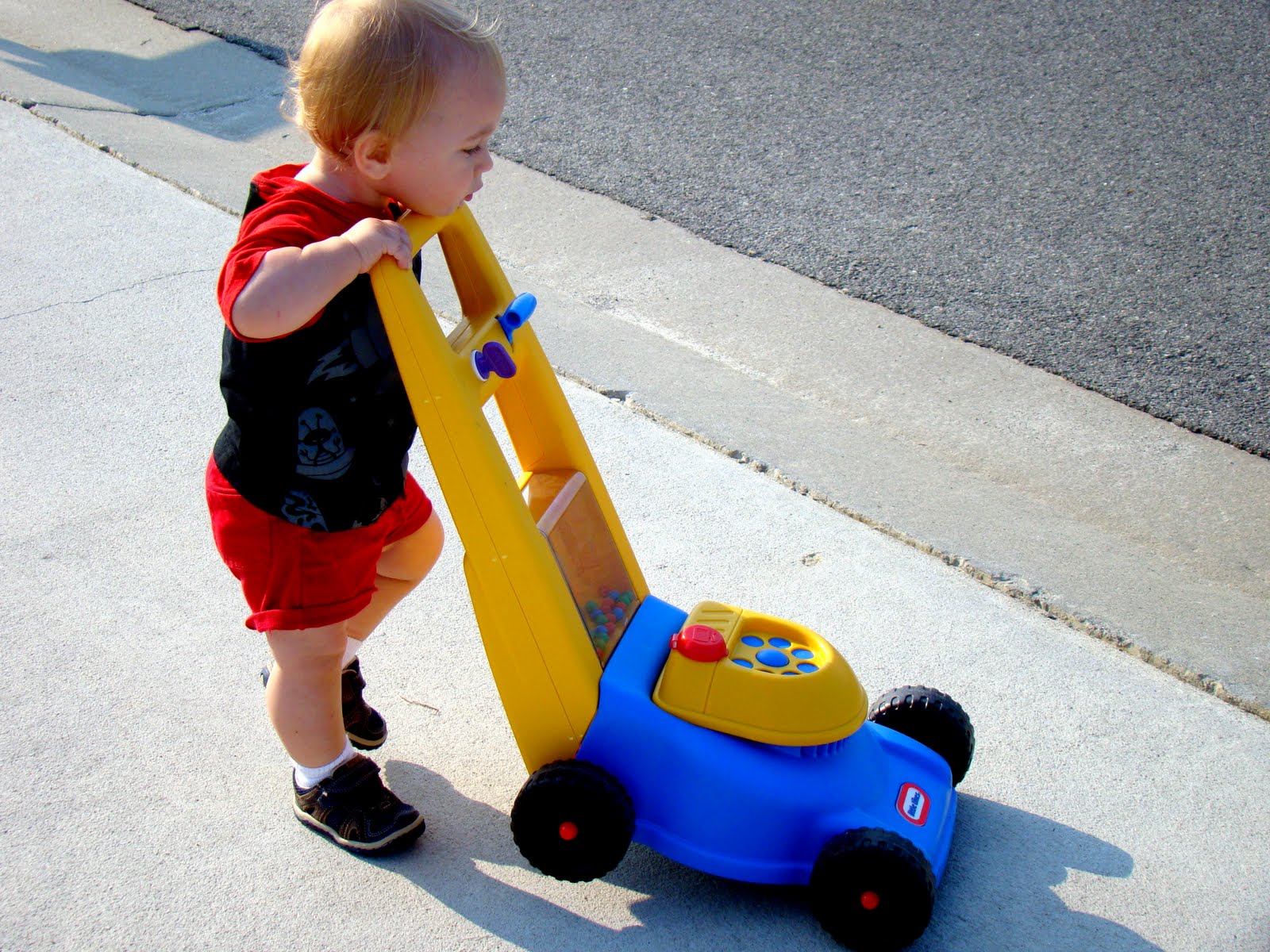 While it’s almost unbearably hot outside during this time of the year I still try to go out to play with Kye as often as we can. Most days though this is something he gets to do when Daddy gets home while I’m cooking dinner. That way he’s busy and I’m able to avoid the heat 😉