Back during the first week of October I noticed my foot was hurting. I don’t consider myself clumsy but I do tend to hurt my feet a lot. I walk around barefoot all the time at home and bump into things, stub my big toe, etc. It’s never really a big deal and I figured the pain would go away.

Zach was out of town on business the whole first week of October. When he got home that Friday I mentioned my foot bugging me and he said maybe I had bruised it somehow and to keep walking on it as it’d probably help it heal quicker. Since I didn’t even remember how I’d hurt it I assumed it wasn’t a big deal.

That next day we went to the Honeybee Festival and that night I met up with Robyn for dinner. By the time I went to dinner my foot was killing me. Like I walked funny and everything. The pain was in my big toe and hurt especially when I bent it in the walking motion. I could also hear this popping sound with each step I took. That night I couldn’t fall asleep because the pain was so bad. I ended up trying to sleep on the couch so I could keep it propped up but I legit couldn’t sleep AT ALL.

It was embarrassing because I consider myself semi-tough. I mean I did give birth to my children without using drugs. I should be able to handle a little toe injury, right? I was crying in pain and couldn’t walk at all. I crawled around the house on my tummy and tried to do different tricks to allow me to sleep. I ended up taking a prescription strength ibuprofen that I had leftover from when I had Brittlynn. It took the edge off enough for me to finally fall asleep at 5 am. Needless to say I didn’t go to church the next morning!

I spent the whole day Sunday resting and Zach was SO sweet going above and beyond to take care of the kids and me! Monday morning I headed straight for a local walk-in clinic. They took x-rays and drew blood to check it for gout. It was swollen and red. When I looked up online about my symptoms they did all fit the description of gout but I don’t fit the type of person who gets it. I was hoping it was broken. Get me a cast. Fix me up. Move on!

My mom injured her foot several years ago and it never healed quite right so I wanted to MAKE SURE to do everything I could to help it heal correctly. The x-rays came back that it wasn’t broken and they sent me home. It was frustrating to not have an answer and they took days to call me and tell me the results of my blood work. Which was negative for gout. The dr basically told me to treat it like a minor injury, do my best to stay off of it, and take ibuprofen as needed for the pain.

Like I said, all of that happened in early October. Since then it wasn’t bothering me too badly. I’m at home majority of the time so it’s not too big of an issue. Unless, of course, I actually WALK a decent bit. It won’t hurt while walking (although I can still hear the popping sound) but it will hurt later on in the day or at night. I decided to call the dr again and go in for an appointment. I wanted answers and to know WHAT was going on! A minor injury should have healed after a month.

I regret bothering with the second dr visit. It was a joke. They took the SAME x-ray again. And, again, it’s NOT broken. Again, I was sent home and this time I was told to take 800 mg of Ibuprofen 3 times a day for two solid weeks then check back in if the pain hadn’t stopped. First of all, I don’t want to take that much medication. Secondly, if I’m taking that much Ibuprofen of course it’s not going to hurt! And lastly, we have met our deductible for the year (thanks to Kye’s surgery and Zach’s ER visit…) and I don’t want to put off doing something to fix this. I want to get this junk handled before Jan 1st!!!

Today I went to an appointment at a specialists office. I decided to not listen to the other drs advice about the two week thing and went ahead and made my own appointment. With the holidays I’ve been walking on it a TON more and it’s def an issue. I’m having a tough time sleeping due to the pain and who wants to live in pain? No thanks.

The place I went this morning was AWESOME. They were all so nice and I had to get more x-rays haha. This time they did my hurt foot but then also my non-hurt one. I feel bad b/c I can tell you every detail about my children but get a little fuzzy when talking about myself. I have no clue how I hurt it, when I hurt it, when it hurts worse, etc etc. Who has time to pay attention to their bodies when you have kids, right????

Anyways when we compared the x-rays I could see for myself that my big toe is messed up. It is curving a different direction than the other big toe. He said he isn’t for sure what is wrong but that we’ll know more once I get an MRI. He think it’s “turf toe” which is something Zach had from playing football. Guess I have a little bit of an athlete in me huh? He said he’s really surprised that I don’t remember a specific injury because often times people end up in the bed for awhile due to the pain. Guess I’m just a soldier 😉 haha

He told me to have an MRI done (in Adel…on a Saturday…it may be a couple weeks before I can figure out when I can go!) and it will tell us for sure what’s wrong. He said there are small bones he can’t see on an xray and they could be broken, causing the issues. He also said I need to do physical therapy. I don’t know much about that kind of thing so I said “like to learn to walk? because I can still walk…” HAHAHA I guess physical therapy isn’t just for people who need to learn to walk…he said it’ll be kinda like a chiropractor appointment where they will do different things to my toe to help it heal. I’ll also be getting steroid shots and taking prednisone. Obviously neither of those are safe to do while nursing. I’m already in the weaning process and was kinda actually considering still nursing her once or twice a day past her 1st birthday for awhile (I’ll explain my reasoning when I blog about the weaning process…) but it’s probably better for our family as a whole for me to wean her fully so I can get this handled. Not only is it better financially for this to get done during 2012 but also physically for me to be able to fully be there for my children!

I’m hoping to get the MRI done in a couple weeks. Until then I’m wearing a boot. I was PUMPED about it at first b/c I knew it would help my foot not hurt…but I’ve been wearing it for roughly 4 hours now and I already hate this junk. It’s like wearing a ski boot around all the time. Yuck! I have to wear it until the MRI and then after the MRI while I do my physical therapy. He said I will do 4 weeks of the therapy and hopefully the combination of everything will heal it. However, the MRI may show a need for surgery and that WILL have to wait until the start of the year. I feel good about all of the other stuff working though and that surgery won’t have to happen! 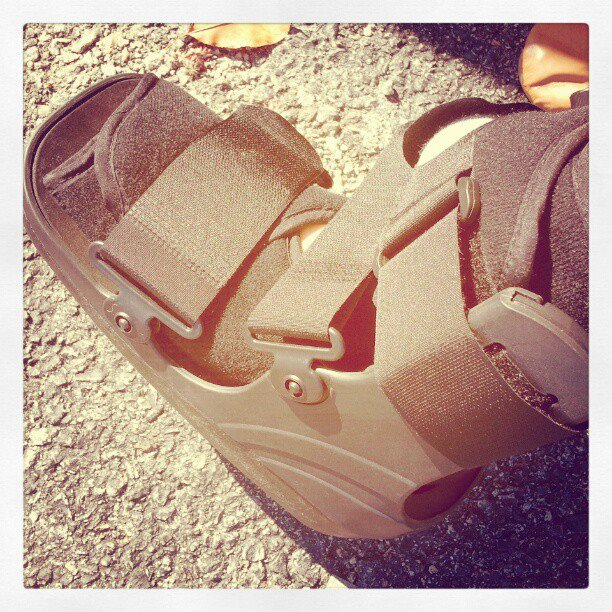 I was all happy about having some ANSWERS and feeling good until I started thinking about it more. MRI? Isn’t that the thing where you have to go INSIDE A TUBE?!?!?! Um…I’m freaking out. I called Zach and told him I don’t wanna do it and he said we’ll talk about it when he gets home today. Hopefully they can like knock me out or something for it?!?! I do NOT do tight spaces. At. All. Maybe I can call that dr back and just do the other treatments first? I mean do I really need to have an MRI? Maybe all the other stuff will just work and we can move on…ugh!

I am so thankful that Mrs Charlotte hooked me up with the specialist today and that I do have some answers and a plan of action. I’m also thankful we’ve met our deductible for the year so this won’t be as much of a financial burden on us. I’m thankful it happened when it did and not over Christmas or something. I would hate to start the new year with MORE medical debt!!! I’m also thankful for the boot…it’s annoying but I know it will help. I’m thankful I am a stay at home mom so I won’t have to really go and do too much on it, I can’t imagine working an office job and being all dressed up nice every day with this junk on. At least it’s winter time…I can rock it with some skinny jeans and a black boot on the other foot no problem! I’m also SO thankful it’s my LEFT foot so I can keep driving and that the dr said it’s okay for us to still go skiing in a few weeks 😉