When we go on big Aflac trips we get to fly out of Valdosta which is wonderful. Since this Aflac trip was through the State it’s not as big of one so they flew us all out of Atlanta. Not that big of a deal but when you have a baby it can be a little tougher!

Kye at the Marriott where we stayed Friday night! 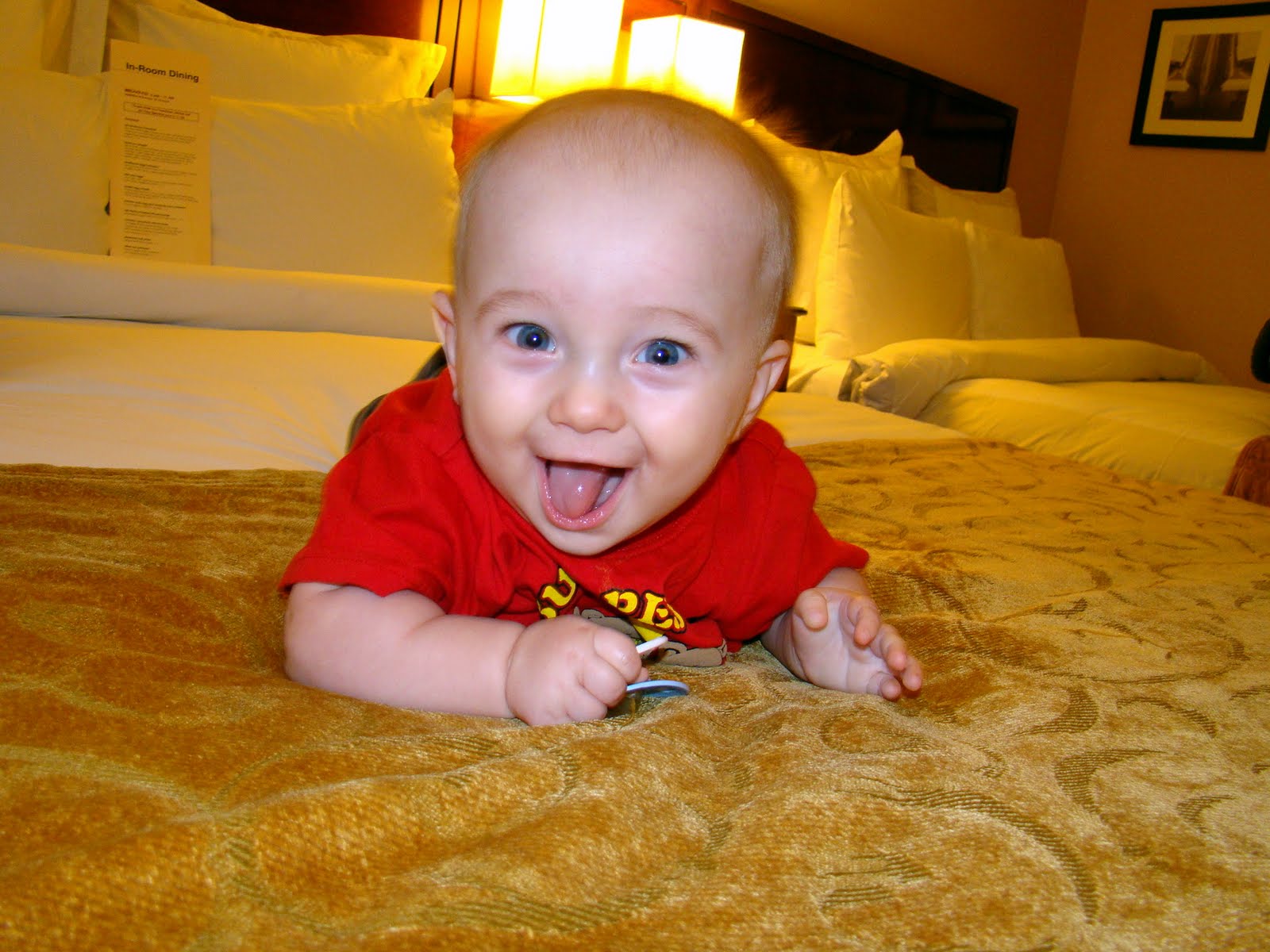 We had one room and Zach’s parents had another room. The room was SO SO nice and we had a nice little evening together. Kye took his first bath with no baby bathtub in it and he did great. He LOVED playing with the water! 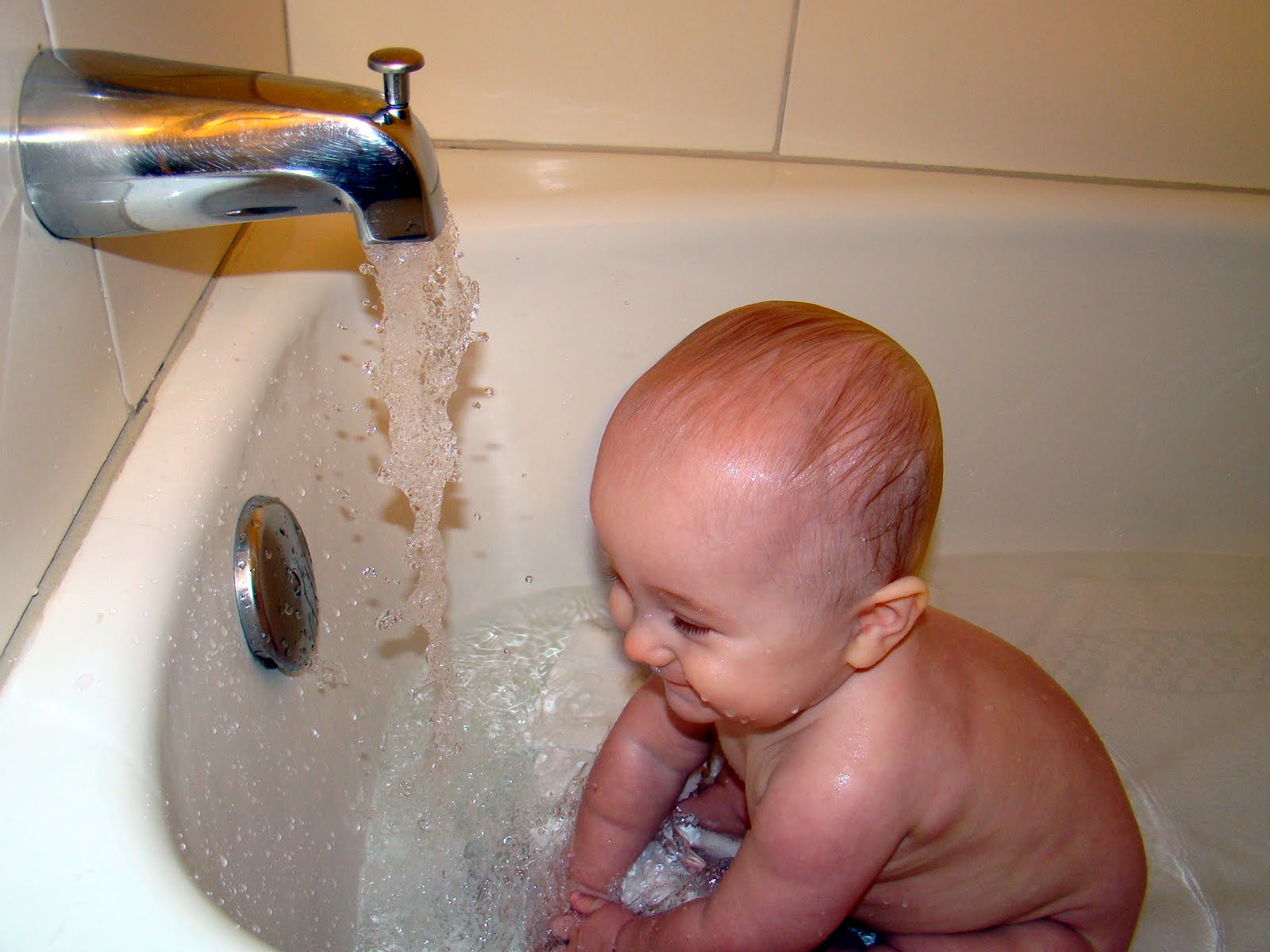 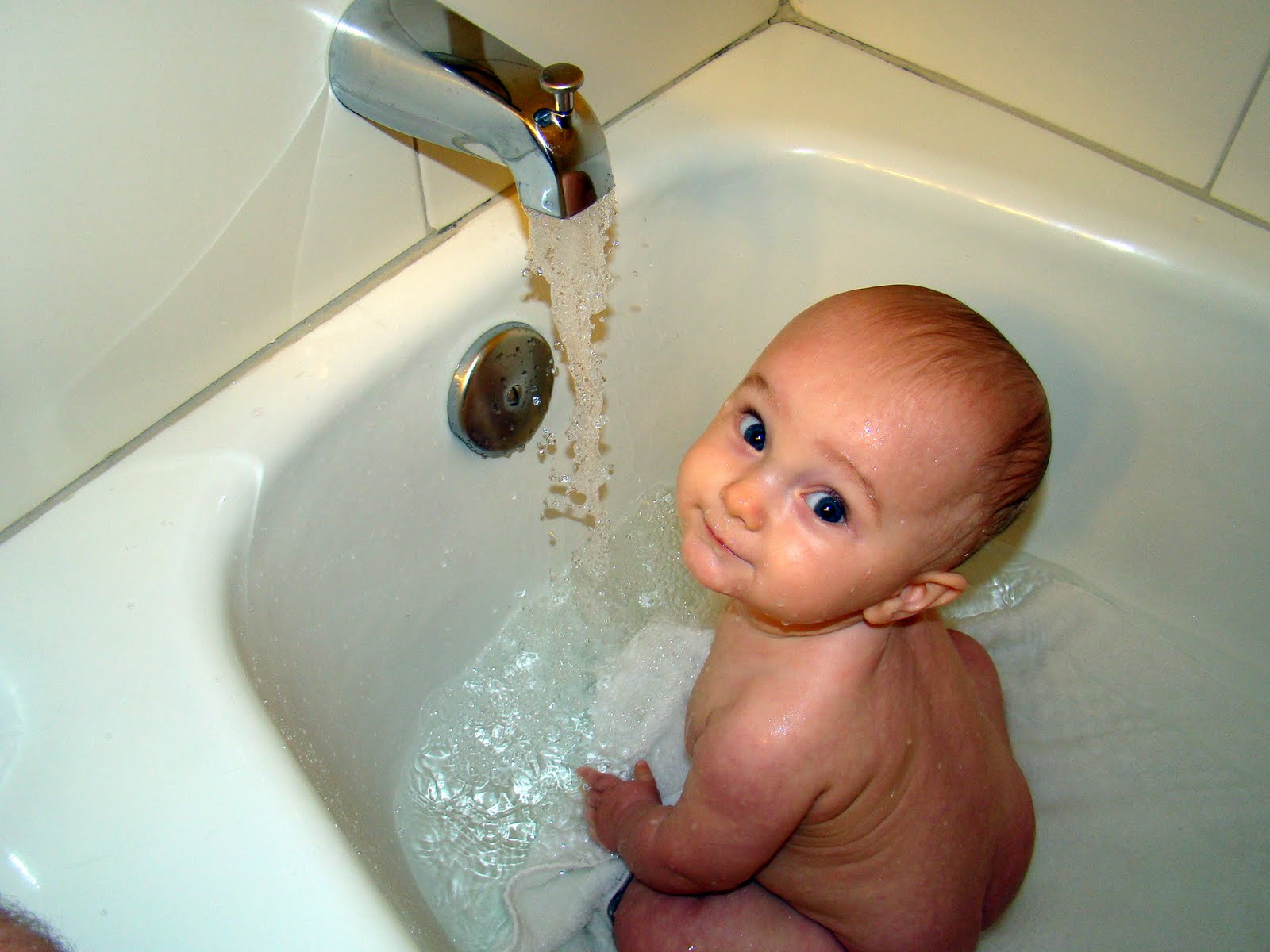 and the drain too! 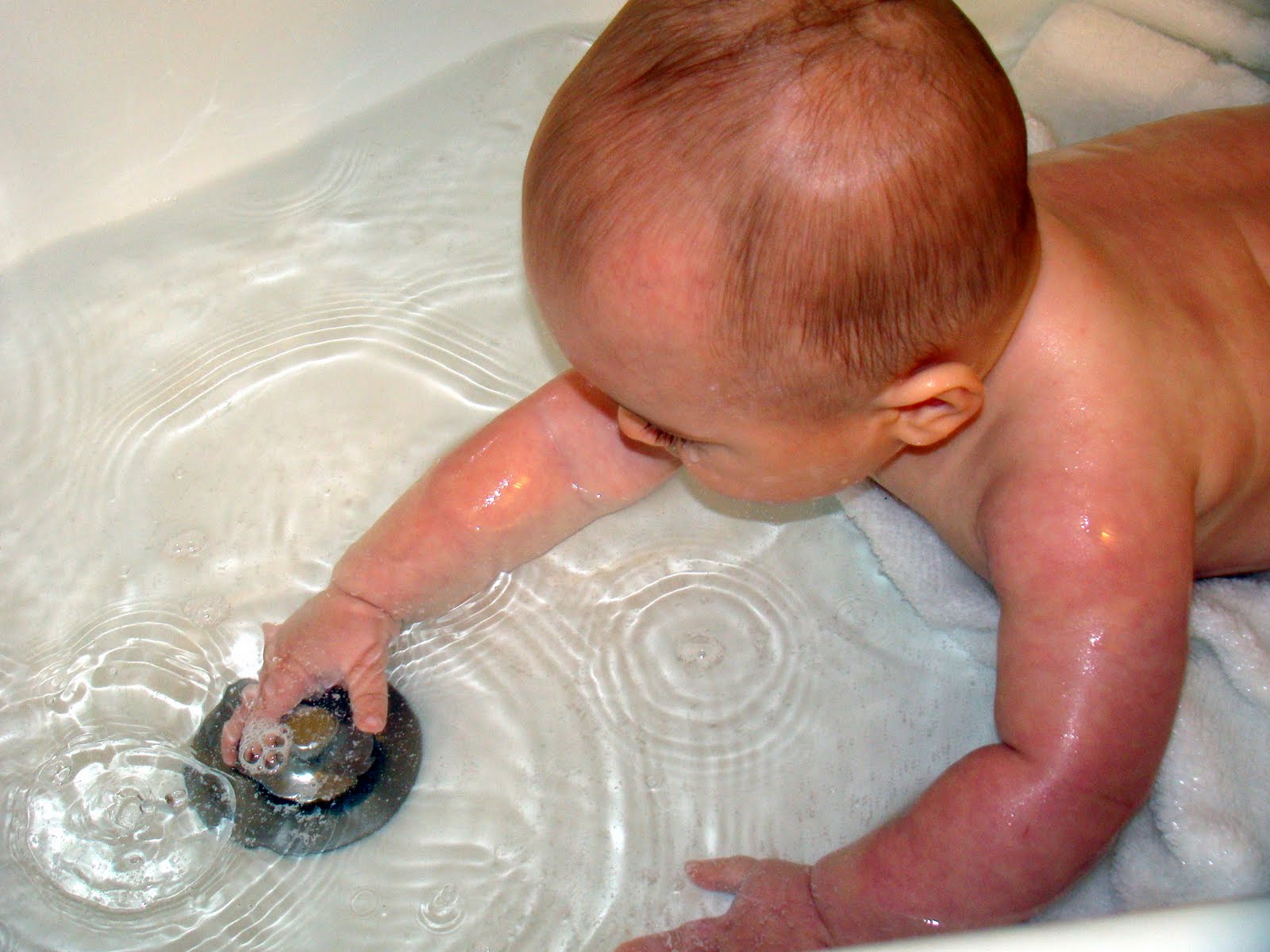 Since we had to be at the airport at 7 am we got up at 5 to get ready. Kye’s pack-and-play didn’t fit in the bathroom so it was ultra tough getting ready while trying not to wake him. Of course the poor kid woke up from all our movement in the room and it was only about 5:15. Not a good start to the day! Zach left before me since his flight (with Mr. Rusty) left earlier than ours. Mrs. Charlotte then came in my room to help me get ready. I ended up getting Kye up at 6:20 (I sat there pretty much the whole hour he was awake trying to pat him back to sleep) and fed him then. 40 minutes earlier than he usual morning feed time! It made me a little nervous but you gotta do what you gotta do.

We headed down to catch the shuttle for the flight. This I felt very guilty about because Kye didn’t have a car seat. Since going on this trip I’ve heard a lot of people talk about bringing their car seats with them and such. It did cross my mind but since Kye flew for free he didn’t have an actual seat assigned to him. Plus I didn’t want to risk the car seat getting messed up if it had to be checked AND we wouldn’t be renting a car or anything in Mexico so we really didn’t need it. It made me nervous for him to not be buckled in on the shuttle but what else do you do?

Have you ever seen a more exhausted baby? 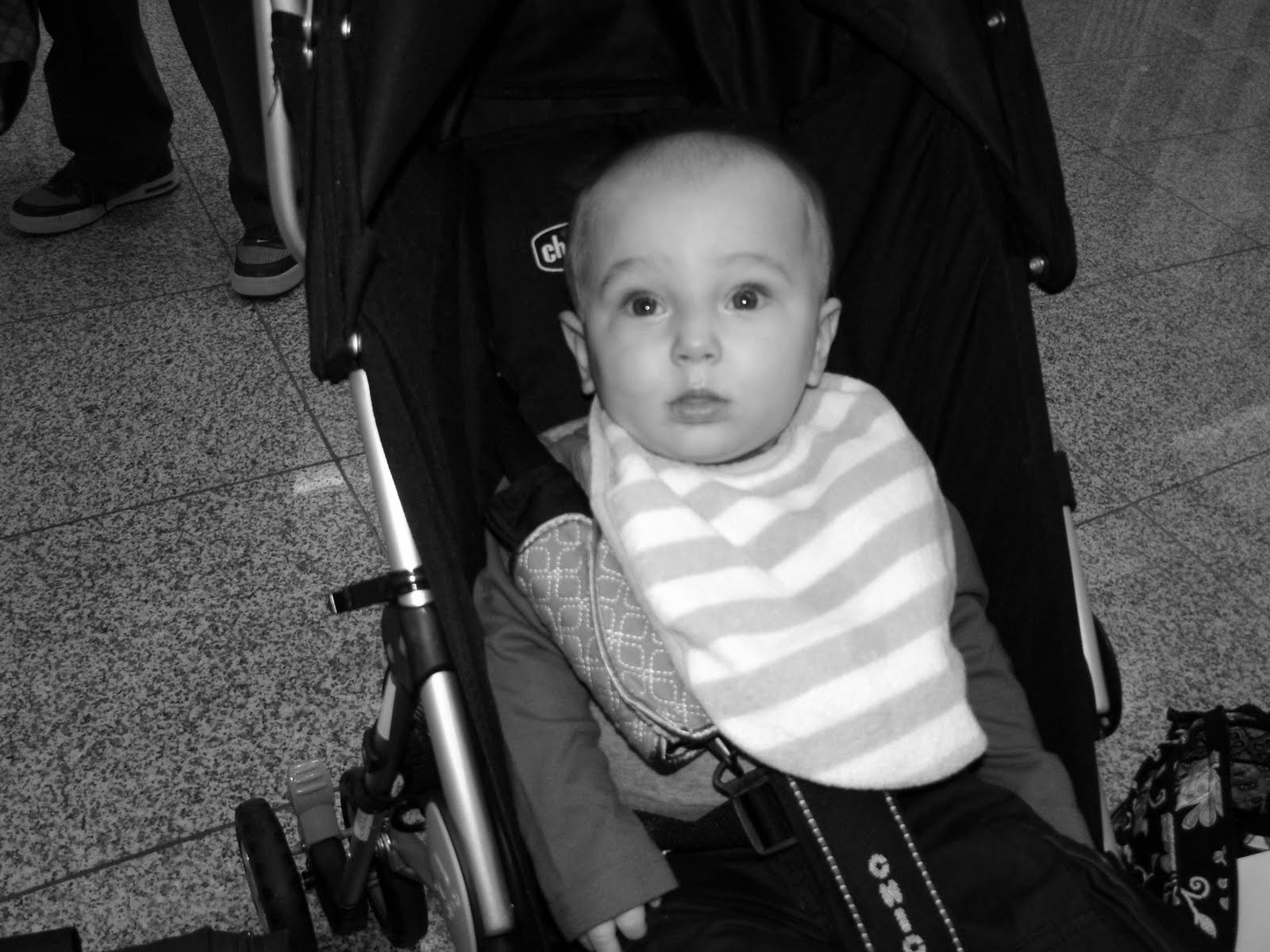 Thank GOD for Rachael! She and I had been texting the day before and she mentioned that you are allowed to bring a stroller in the airport and they will put it on the flight at the gate for you. THIS WAS A LIFE SAVER!!!! I don’t know how Mrs. Charlotte and I would have been able to do it without the stroller. It made Kye way more comfortable too! The guys took ALL our checked luggage so we just had carry-ons. I brought 2 diaper bags with everything we might need, plus a cooler of breast milk for the trip, and Mrs. Charlotte had a carry-on as well. At least we didn’t have to mess with checking bags though! 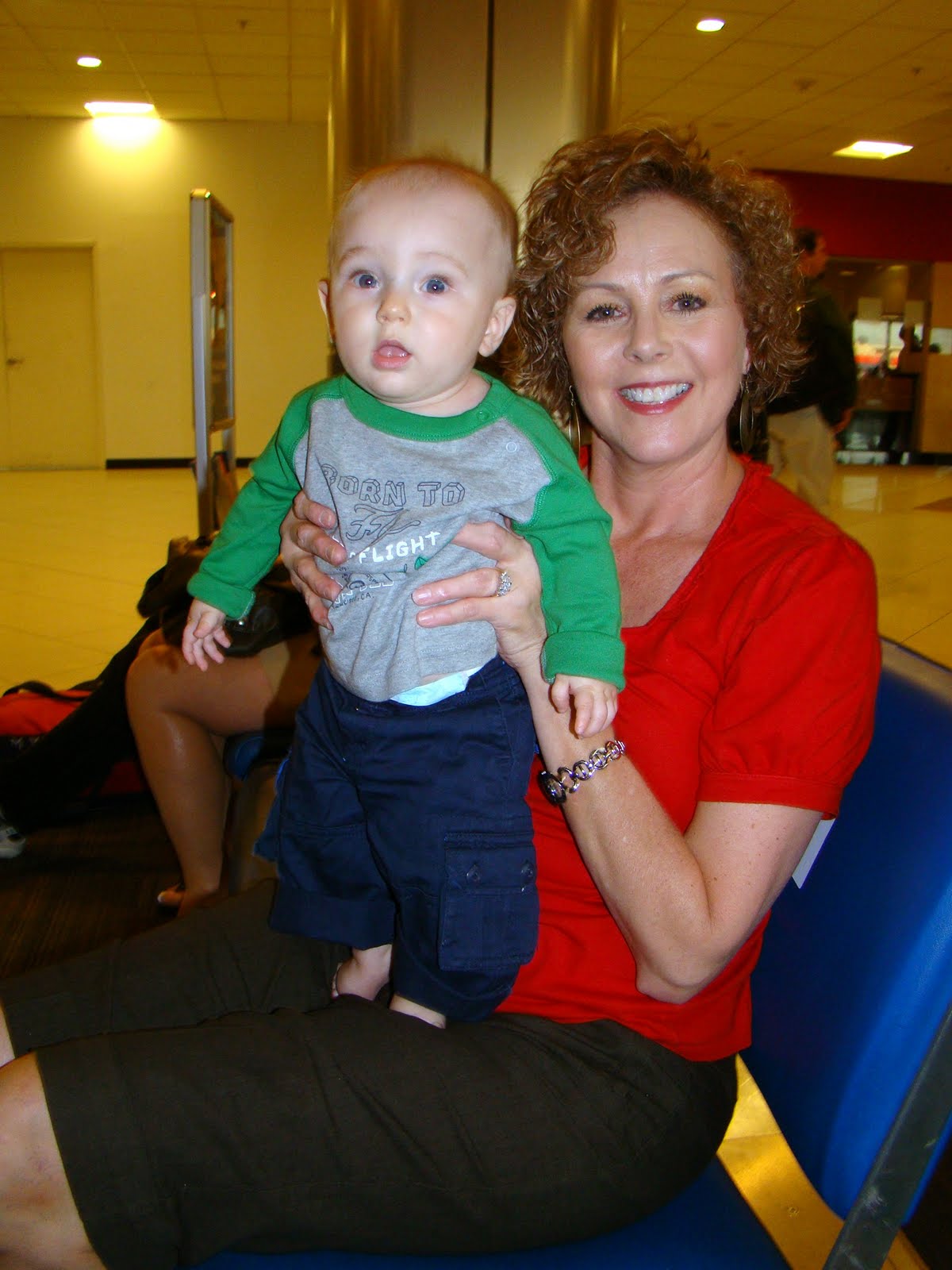 I have to say that Mrs. Charlotte and I made a killer team. We zipped through that airport like we owned the place. I thought having a baby would make it rougher but omg it made it soooo much easier. Everyone was SO nice and we breezed through security. They let me on with allllll kinds of liquids. I had an opened bottle of water, a bowl of already mixed rice cereal, plus all my little things. No one even questioned me! Not even about the breast milk! 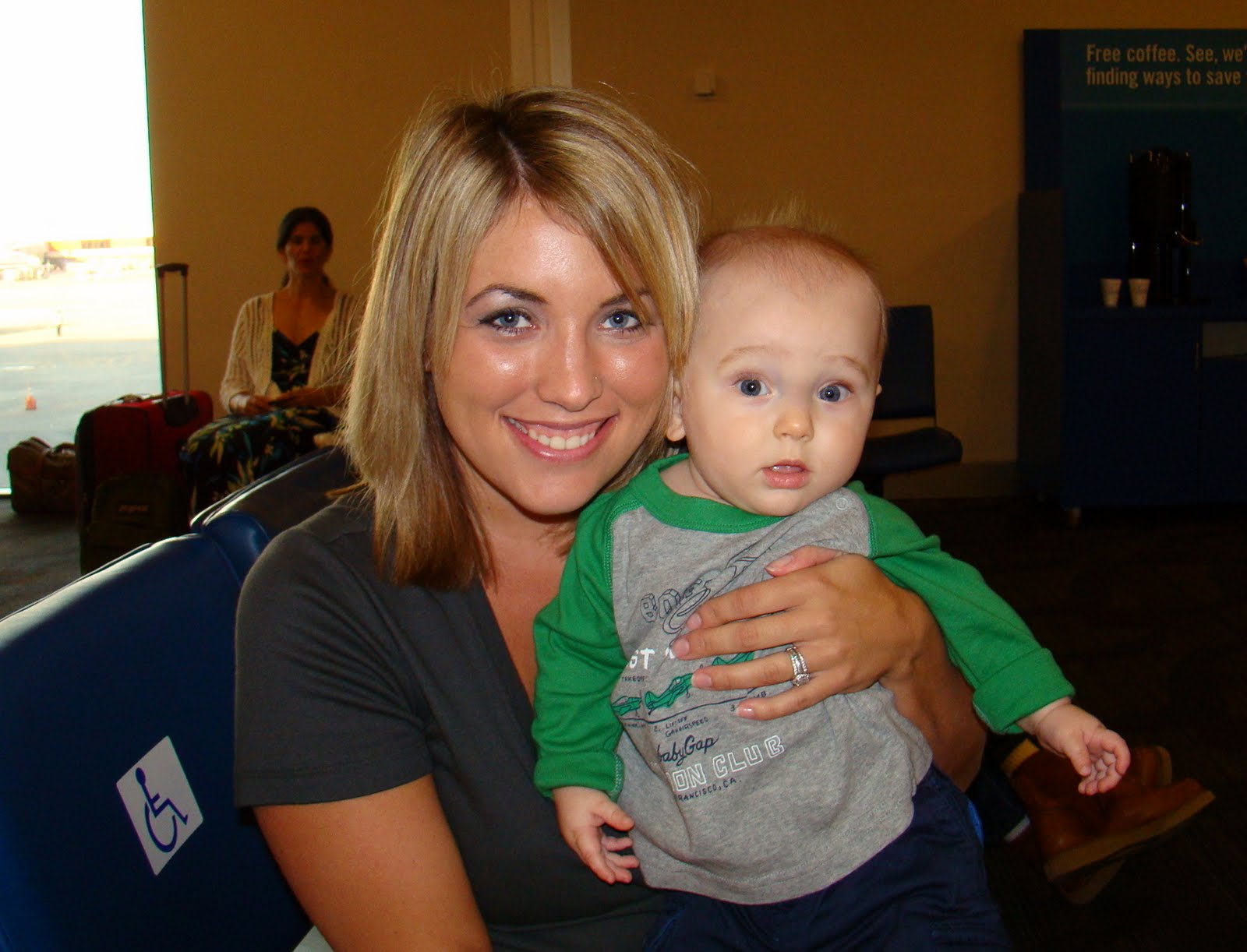 We got to the gate SUPER early so I fed Kye his solids (almost an hour after he had the breast milk which I don’t like but it did keep him from getting hungry early) and laid down a blanket for him to play. He did wonderful! He laughed and played with his toys just like we were at home! Then at about 8:45ish he got sleepy and fell asleep in Mrs. Charlotte’s arms for his normal nap! 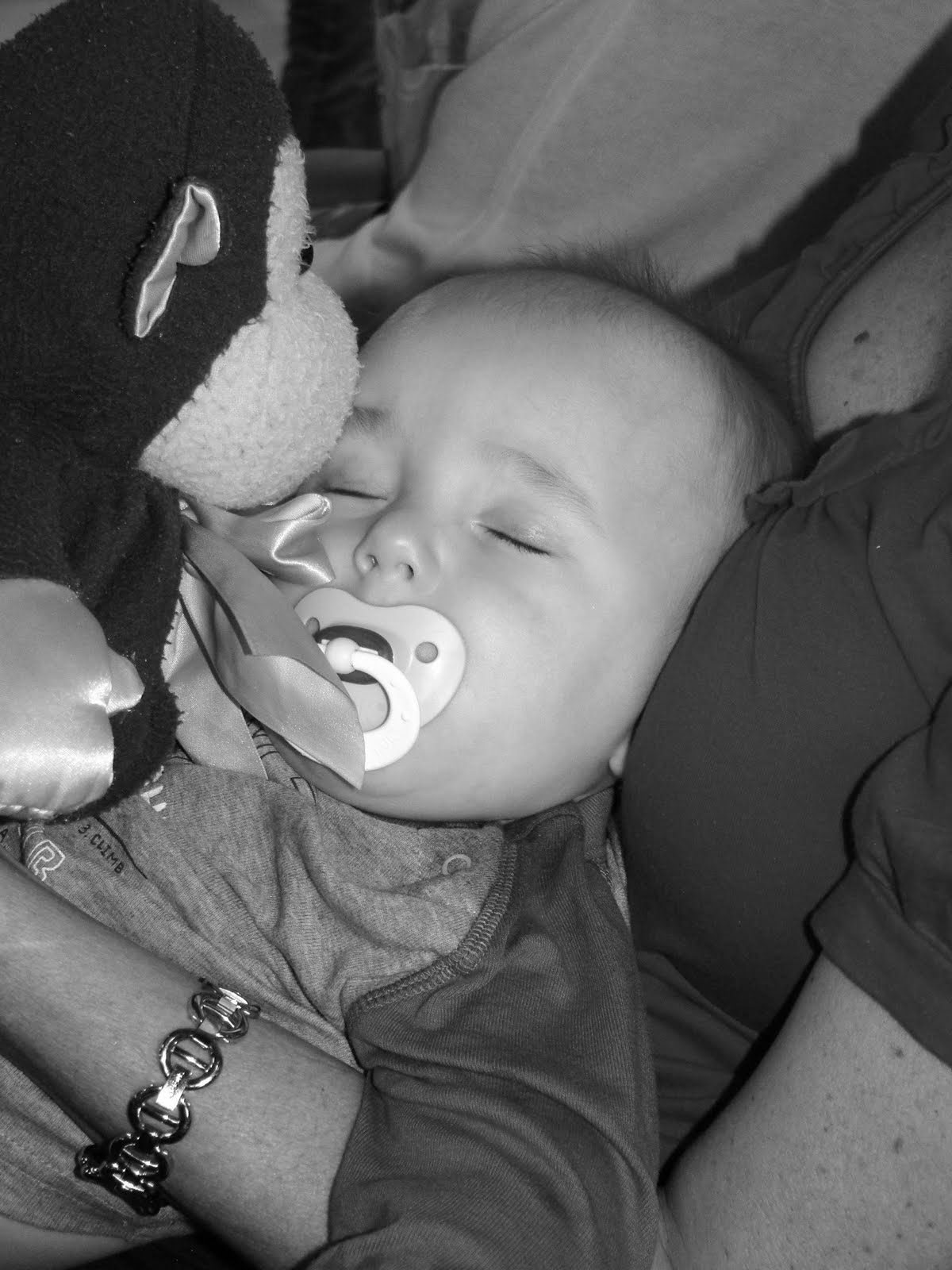 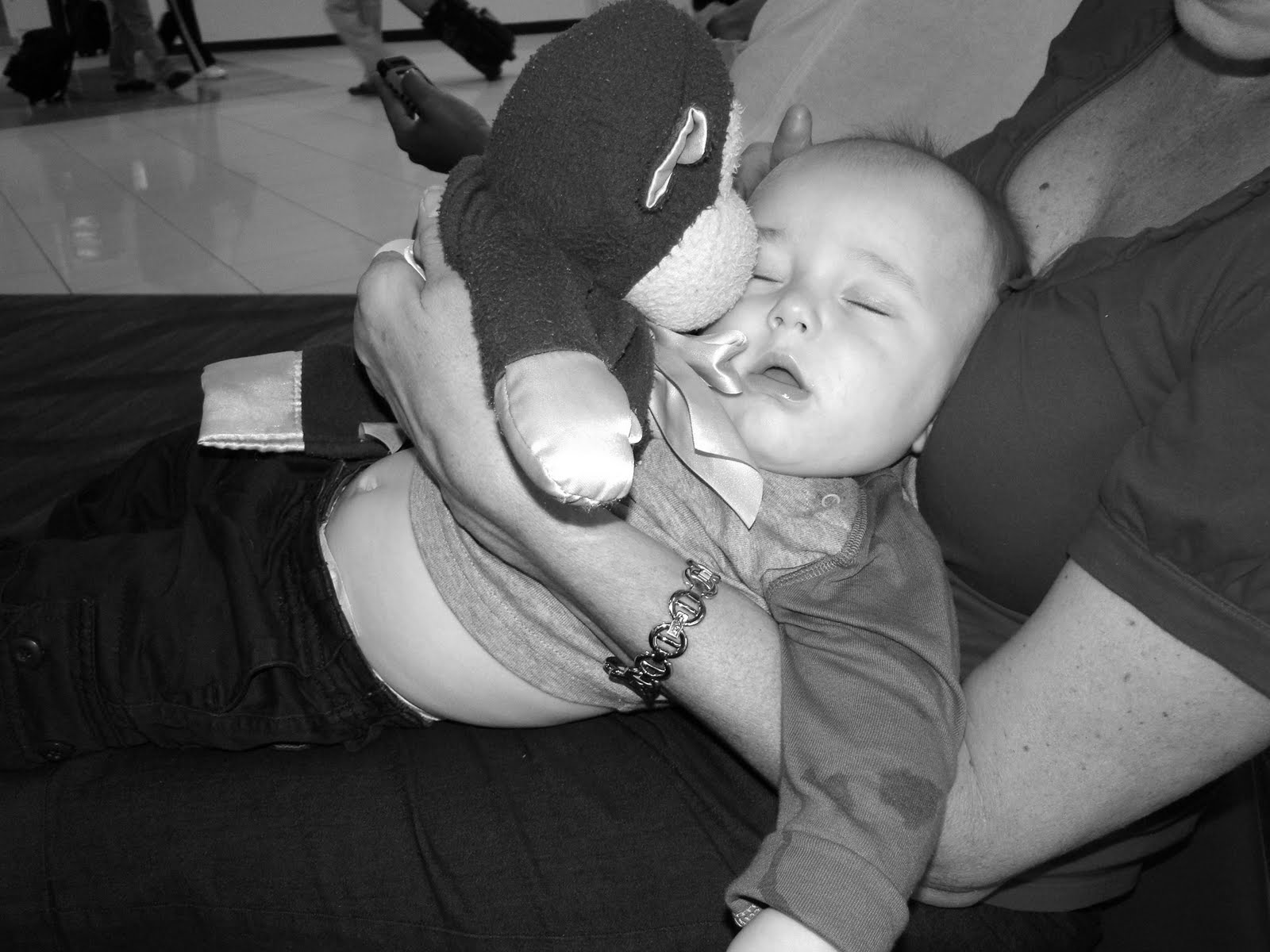 We got to board the plane first (another baby perk!) and we lucked out and they gave us a seat for Kye! It made it all that much more easy! I was hoping he’d keep sleeping but with all the hustle he woke up and was happy as could be. I went to TOWN on the seats, arm rests, trays, and even the windows scrubbing like crazy with a bunch of sanitizing wipes I bought. I’m not a clean freak but with this swine flu junk you can’t be too careful! I really wanted to get his picture with the pilot before take off because his little “First Flight” shirt was nice and clean. But the flight attendants weren’t too friendly 🙁 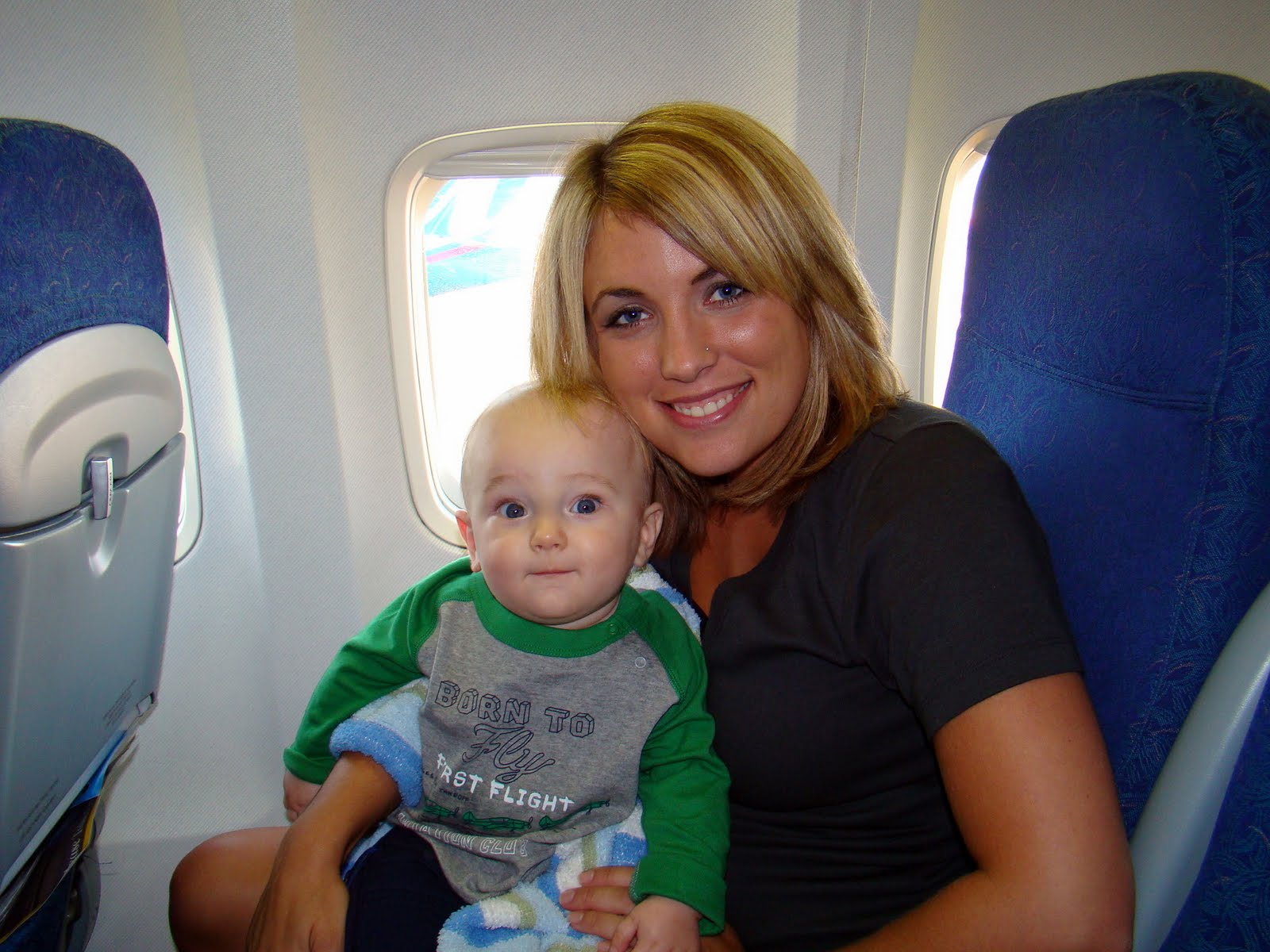 The flight went AMAZING. I have said this a million times now but you really don’t know how well your child behaves until you put them to the test. I was super nervous that he’d be mega loud but he was a little angel. Mrs. Charlotte tends to have some one-liners and hers for this trip was “I swear he only cried maybe a total of 10 min the whole day.” And it’s true! He was PERFECT! And it felt so good having so many people approach me to tell me that they didn’t even realize a baby was on the plane at all!

He loved to play up-side down 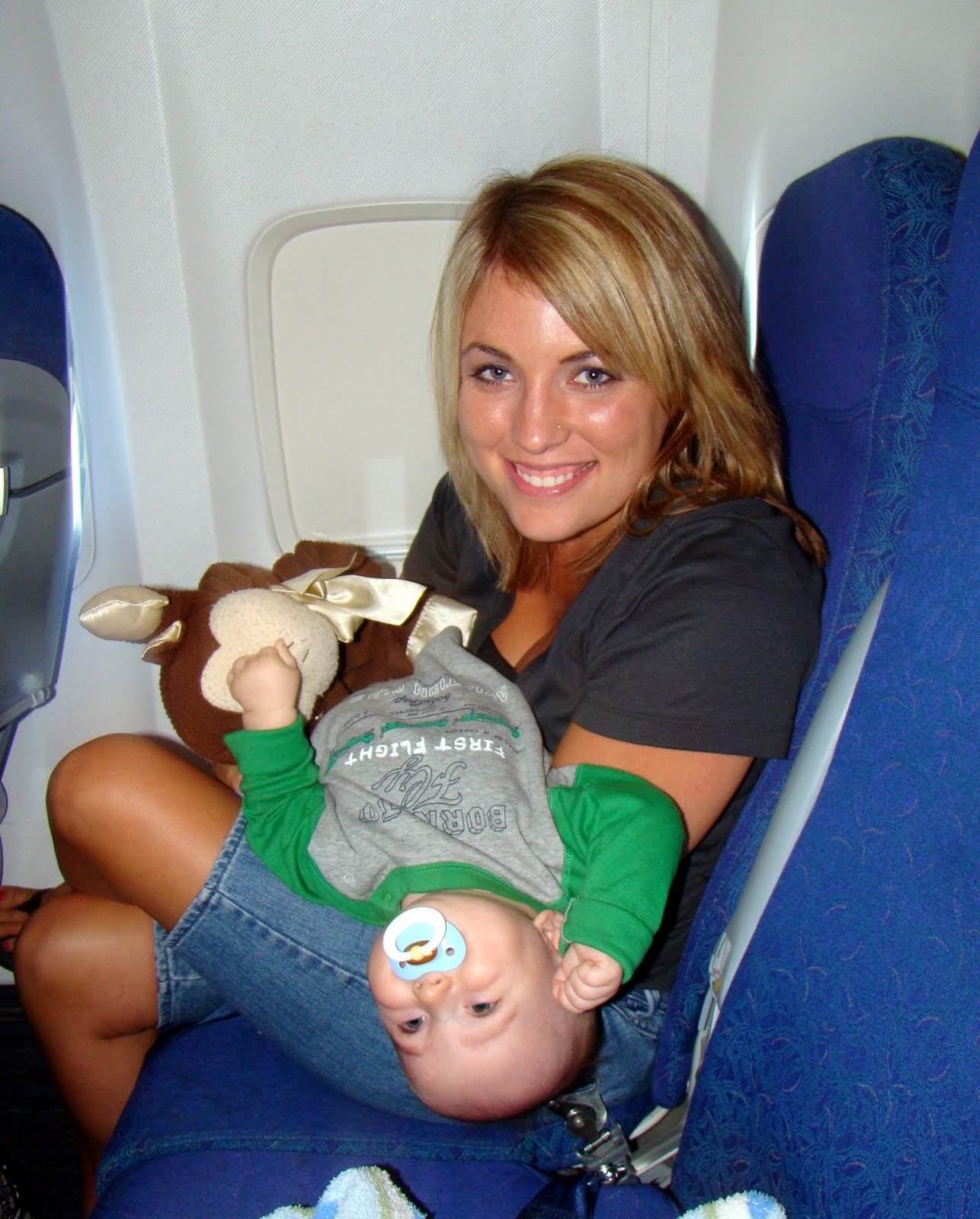 And he enjoyed his very own seat! 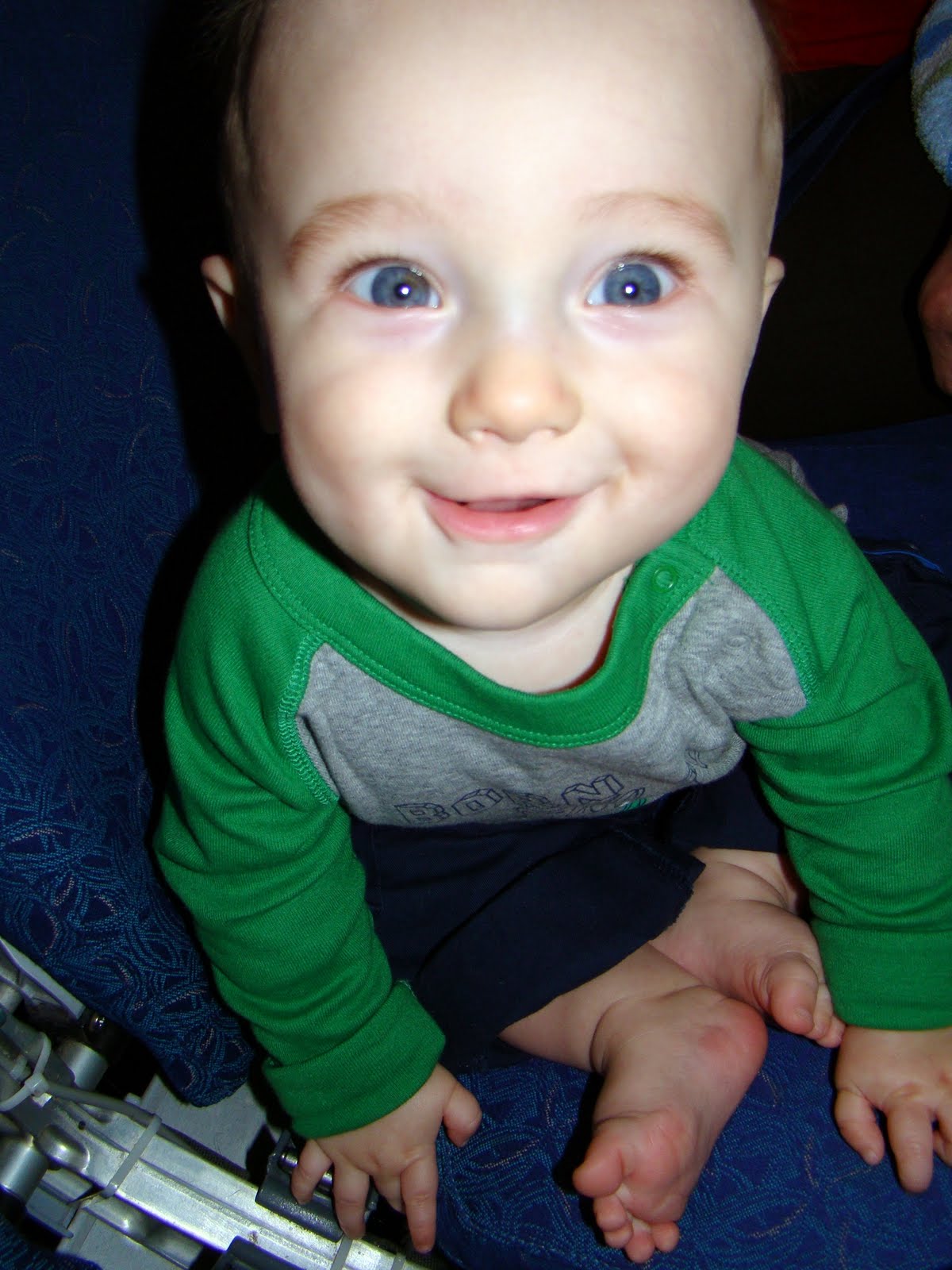 I’m very anti-paci when he’s awake but since the flight was during his nap and I’ve read that the paci helps their ears not pop I let him have it most of the trip. I think it helped him stay a little more calm too as I have a very squirmy child! He got sleepy again and fell asleep for about 30 more min so he had a decent nap overall! 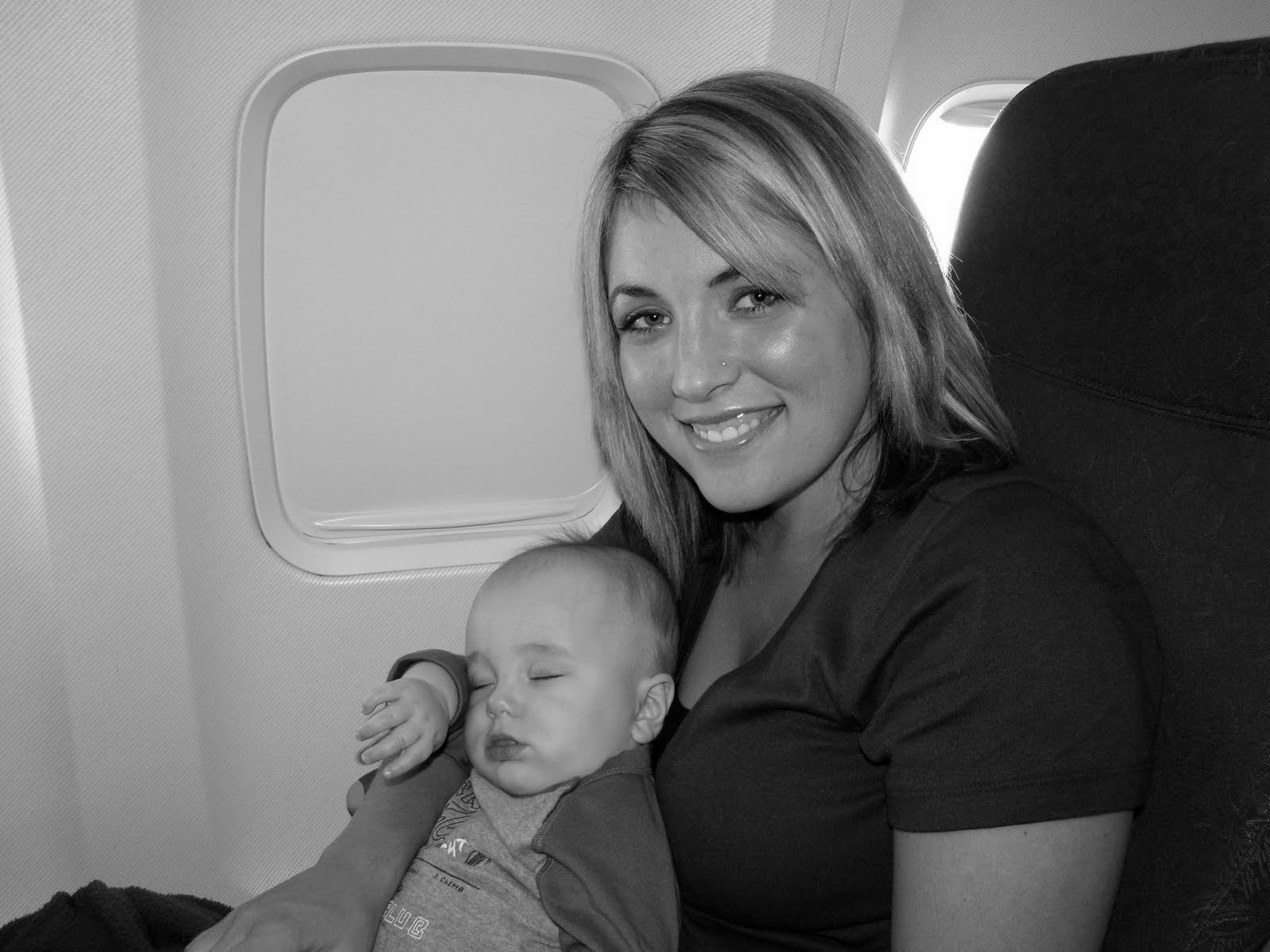 He did so great that we didn’t even realize how fast the time went by and it was 11:20 when I realized it and he had to eat! The kid went from 6:20 until 11:20…5 hours! And he didn’t fuss one bit! I was a little freaked out about nursing him on the plane but I didn’t have a choice at that point and it went fine. He eats SO fast now that it was actually quicker than a bottle. Then we just set him in the seat and fed him his solids, no issue at all. We even changed his diaper in the seat and just stuck it with the rest of our trash when the lady came by haha. Kinda gross I guess but why make the trip to the TINY bathroom? It was much easier from our seat!

My camera did something funky but I was glad to have the Hooter Hider Crissy made me! 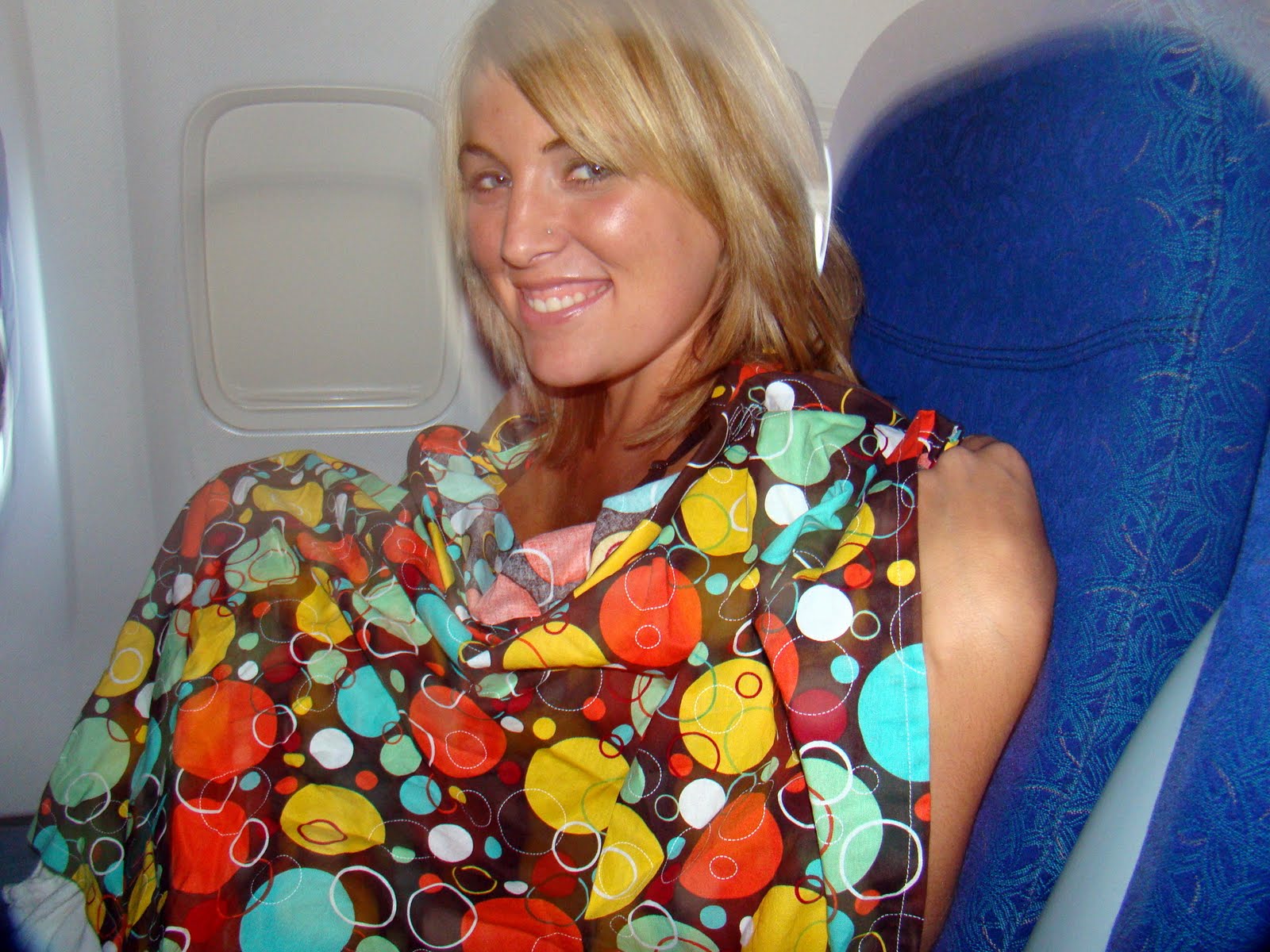 We landed without a hitch and I couldn’t get over how wonderful the whole experience was! I had packed 1,000 toys ready for anything but he didn’t play with a single one the whole ride! We let everyone else get off the plane first so we could spend some time with the pilot and get the pictures I wanted. It made the pilot a little nervous that Kye was alllll about flying haha 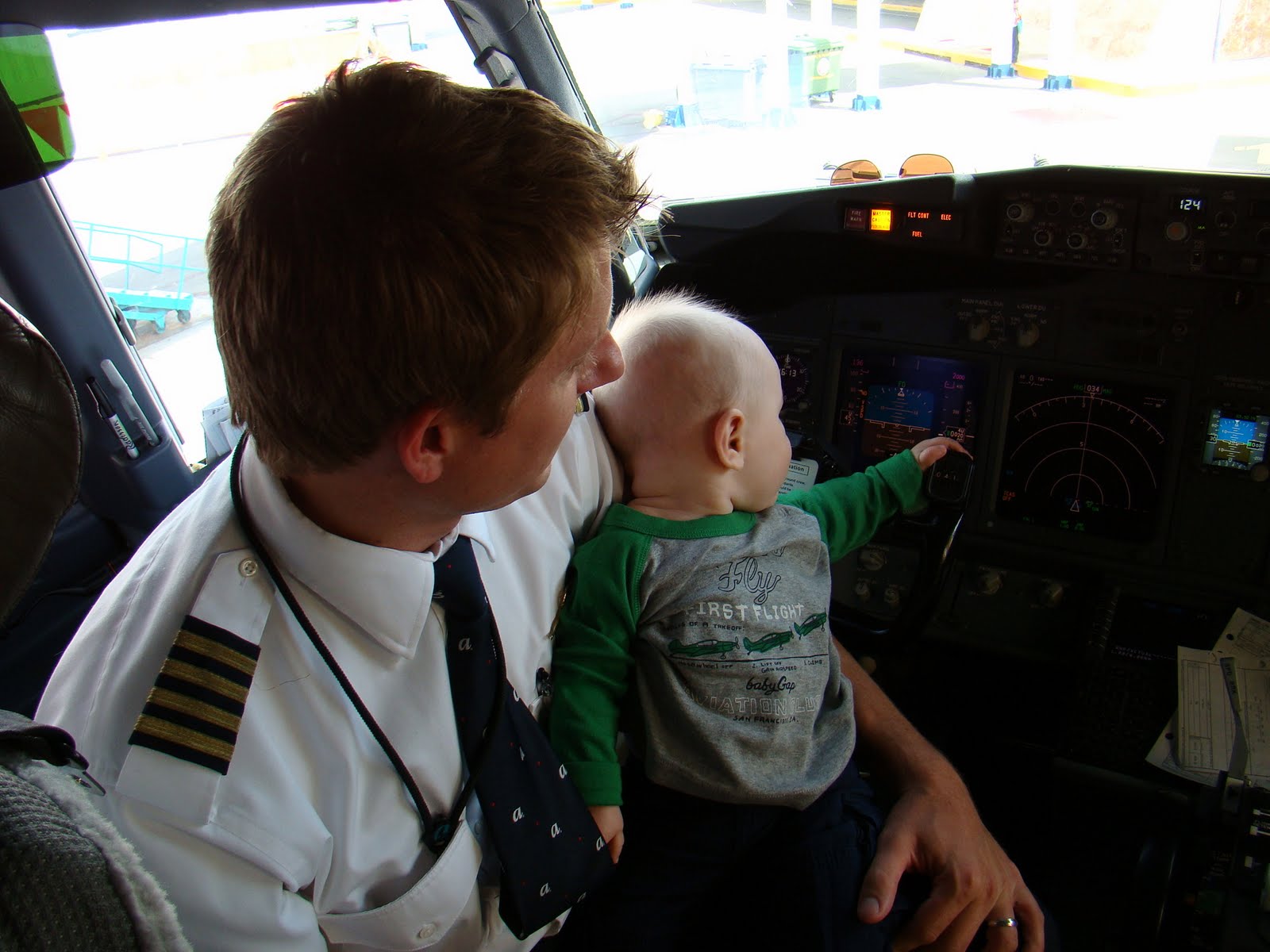 The pilot was super nice though (and cute!) and said he’s expecting a baby any day now! I asked what they’re having and he grunted, “ANOTHER girl.” Haha! This picture turned out super cute…they have like the same expression! 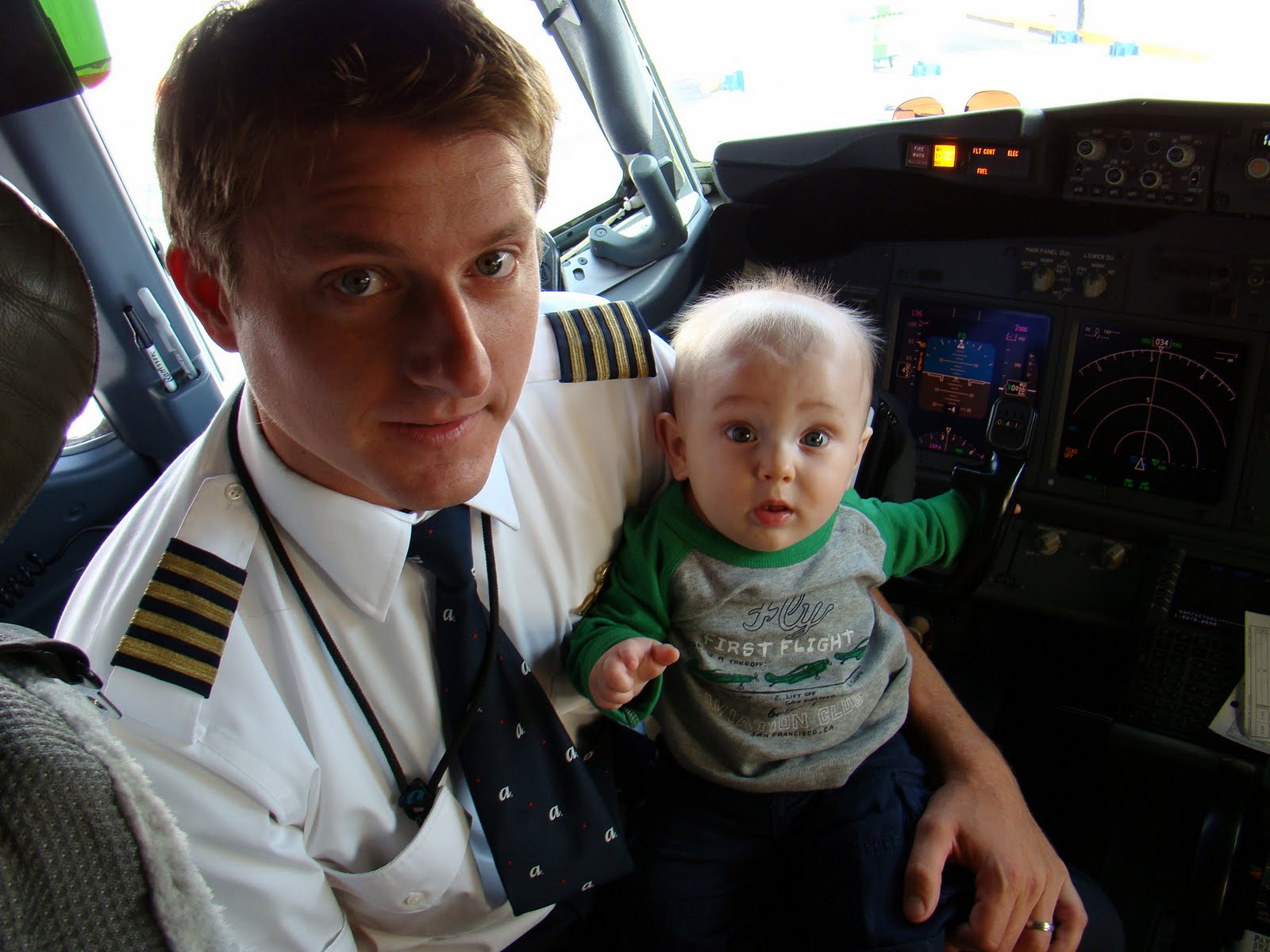 Not having any checked bags saved us a ton of time and we breezed through it all. Even customs. I was nervous that they wouldn’t be so easy going with the breast milk in Mexico, but again no issues. And Kye got his first stamp in his little passport! 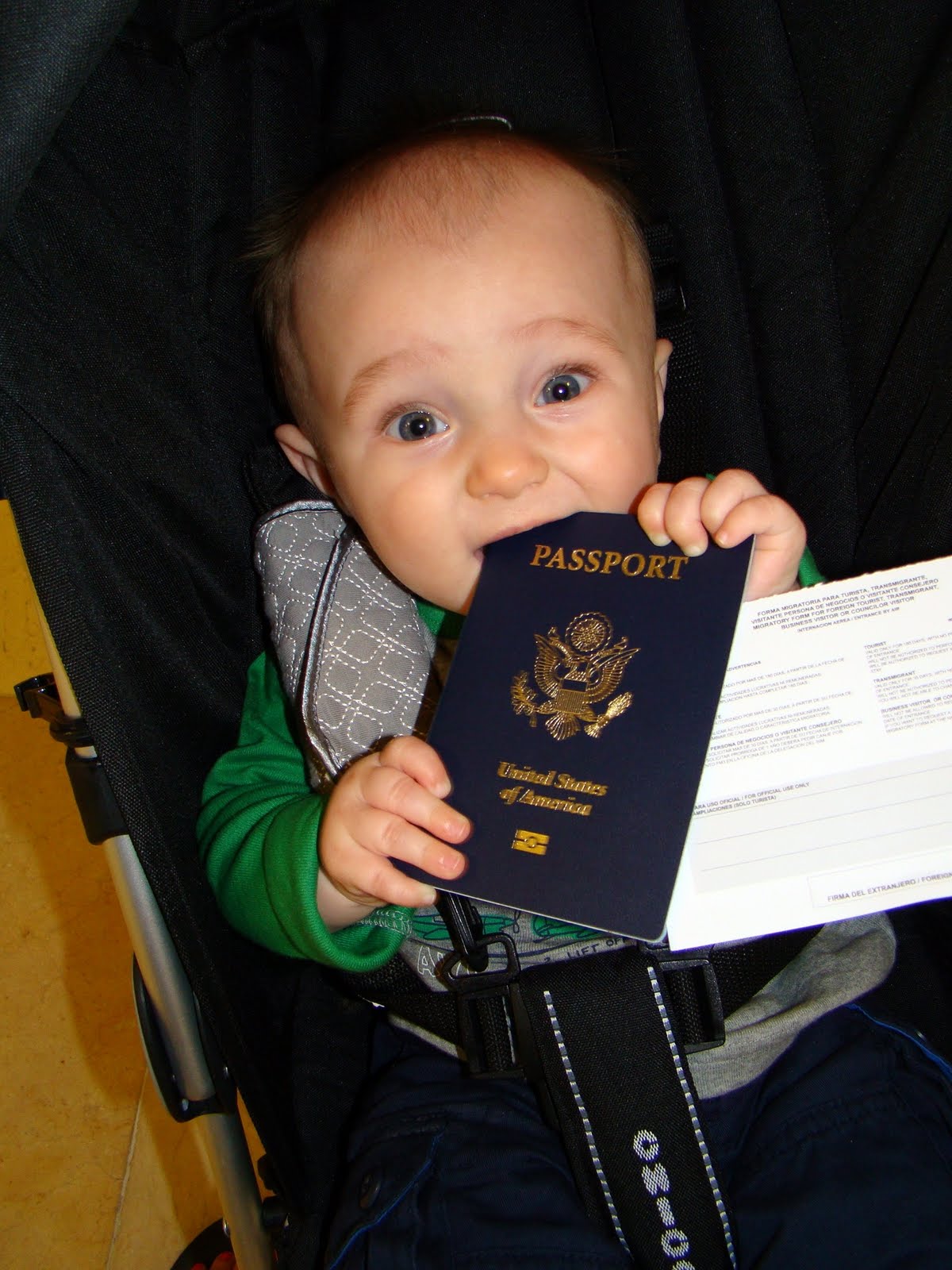 The lady that did our trip booking had a little mis-communication issue so it took us awhile to finally get with the Aflac group but we were still the first ones there! Zach and Mr. Rusty were the LAST to board the bus because they had a LOT of customs issues. Turns out 2 men carrying luggage filled with women and baby clothing is kinda suspicious. Haha At least we all made it to Mexico safe and sound! My prayers were answered and we could start enjoying the trip! Here’s Kye’s first official picture in Mexico!!! 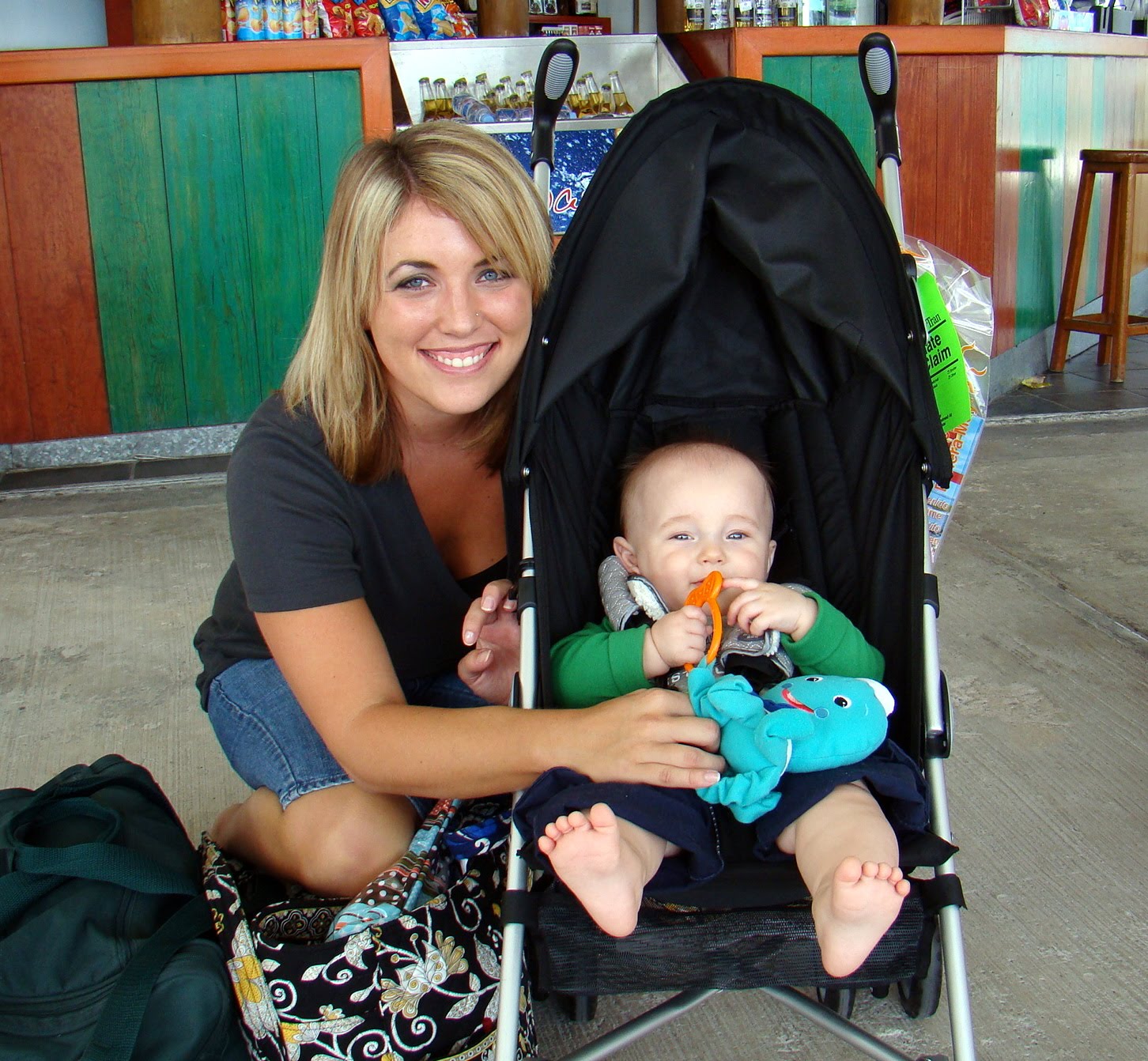