The day and time that Kye came into the world couldn’t have been more perfect! He was born at 6:55 so that allowed everyone we wanted to be there to be there since they weren’t at work or in school! Being born on a Wednesday meant that Mom could stay through the weekend with us which was SUPER awesome! She was a HUGE HUGE help and I don’t know what Zach and I would have done without her. Usually they say that company can stay too long but I was with Mom for 24 hours a day for 4 days and we didn’t have a single argument! I was very sad when she left and the trip was really good for all of us.

It allowed Mom to get to know her first grand baby, to take care of her daughter, to get closer to Zach, and to know Charlotte better. The whole experience was a great bonding time not just for Zach and I with Kye but for all of us with Mom! I’m so lucky to have the amazing mother I have who is willing to drop everything and take care of her little girl!

Our first weekend as a family was a pretty eventful one! Of course Levi coming home on Saturday was a HUGE excitement for me! I think him coming home ended my adrenaline rush from delivery because after he was home I became SO tired! 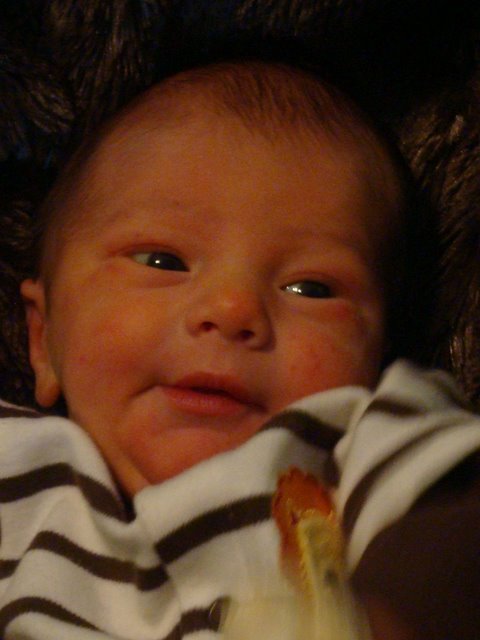 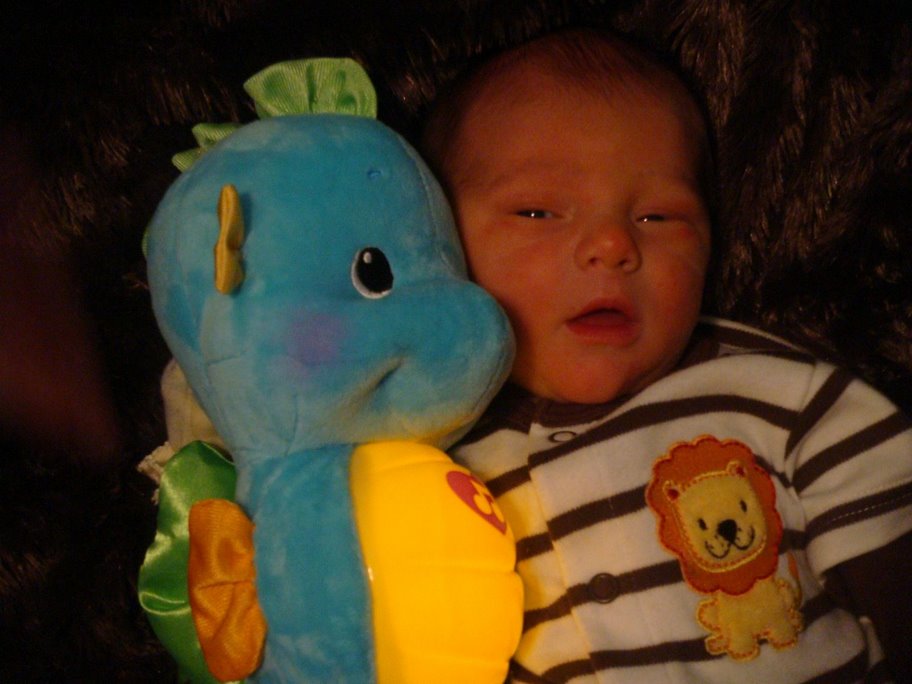 I had told Zach to save my push present until he went back to work and I was alone with the baby because I knew I’d need a pick-me-up during that time. But he was DYING to give it to me so I let him 🙂 I really thought he’d get me something in the baby’s birth stone. But I married a smart man! He was worried Kye would be born in February and it’d screw up the gift so he got me something even better! BROWN SALT WATER PEARLS!!!

On my 21st birthday I went to St Augustine with Dad, Brandon, and my Dad’s wife at the time (Stella). While there I saw these beautiful brown pearls and I fell in love. The guy said he’d give me a great deal for them and I showed them to Dad and told him how much I loved them. Well later that day Dad said he’d “be right back” so I thought for sure he’d gone to get them for me for Christmas. Christmas came and went and no pearls. So since then Zach’s been looking high and low for some! And FINALLY almost four years later I have them! They are so so pretty and so worth the wait 🙂 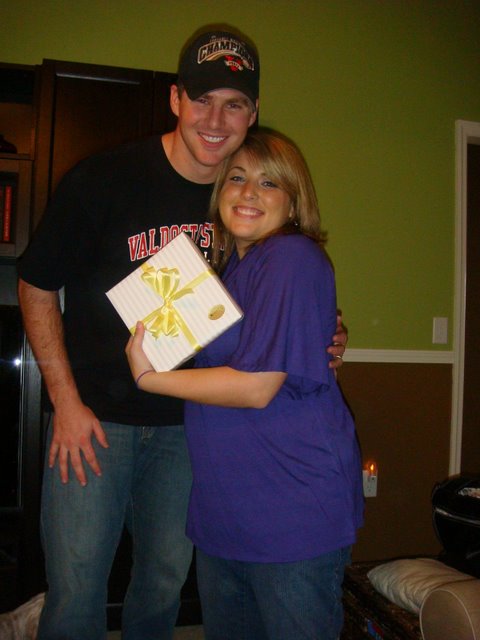 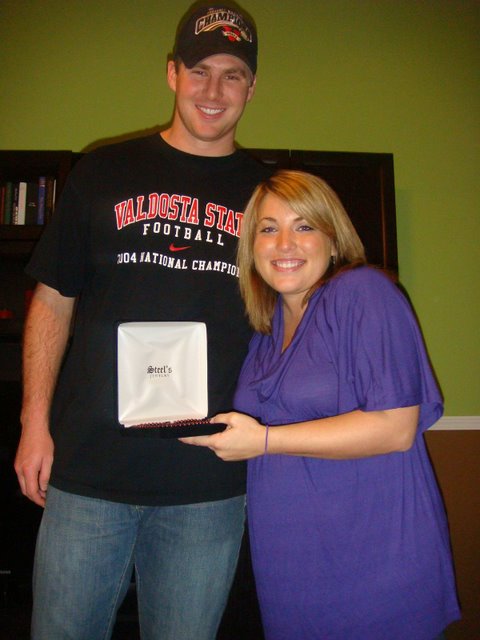 We took Kye on his first outing…I guess you’d call it that even though it was just to go back to the hospital. When we originally left the hospital I thought it was so stupid that they made us come back two days later but when the time came I was so so thankful for the visit…I had a MILLION questions!

The nursery lady wasn’t very nice and it bothered me that she completely ignored Zach. I know a lot of men aren’t very involved but Zach is VERY involved and at that point was taking care of Kye more than I was so he really knew more than I did about the child but when Zach spoke she pretty much just kept looking at me.

They weighed him and he did lose some weight, but that’s normal. He went from 7lb 6oz to 6lb 13oz. She went over some tips for more successful breastfeeding (I will be having a VERY involved breastfeeding post soon). And the best tip she gave us was that she let her kids sleep in their car seats sometimes! We tried it that night. Haven’t done it much since but it did help him some with his gas! They also checked him for jaundice. We thought he for sure had it but they said he didn’t! So good news all around! 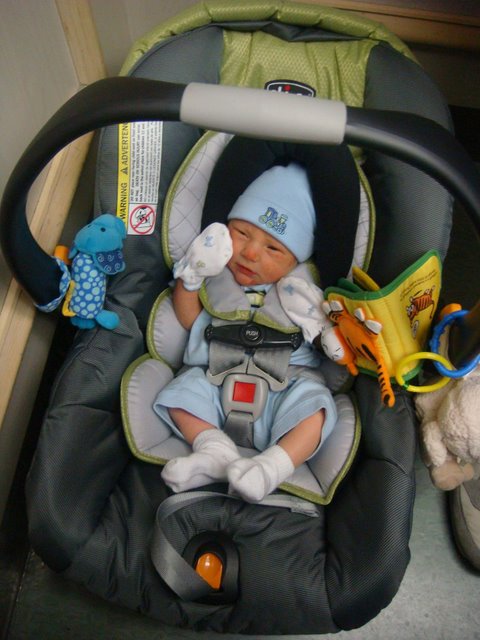 After that visit I was just totally wiped out so that’s when it was decided that I’d go straight to bed and only get out of bed to feed him or eat food that was prepared for me by someone else. Mr. Rusty stopped by sometime that afternoon but I don’t remember his visit because I was sleeping off my exhaustion!

Aunt Karen stopped by after church on Sunday and said they made a nice announcement about Kye’s birth and that it was also in the pink sheet. I wish we could have gone!!!

Mom planned to leave on Sunday but said she could stay longer if I needed her too. I felt MUCH better on Sunday so she helped me get the house in order and stayed for Kye’s FIRST bath! I’m so glad she got to be here for such a big first! He did a great job and even let me file his nails. We haven’t done that since because it was dumb! They were still sharp! I just bite them off. I’m honestly not afraid of hurting him (again I think it helps that I’ve cut the dogs nails a MILLION times) and I do it usually while he’s breastfeeding or being changed. He doesn’t even mind it! Even though I bite them down we still leave him in mittens pretty much all the time because we really, really don’t want him scratching and as soon as you take them off his fingers go right to his mouth!

Bathing him was really easy…a lot easier than I thought it would be. He really loved the warm cotton balls on his face and we’ve done that throughout the day as he will get milk all over himself and be all sticky! 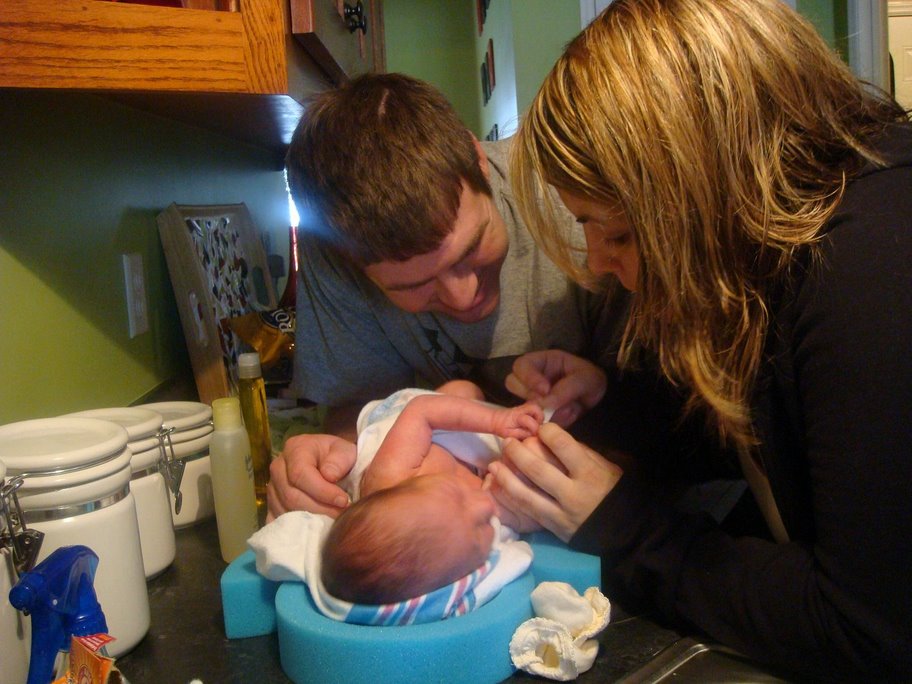 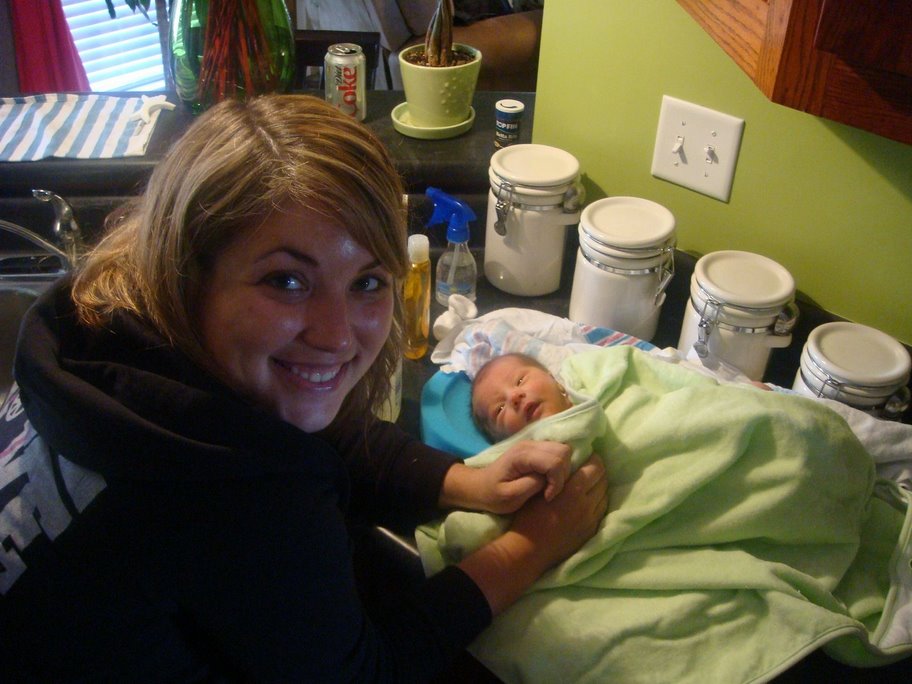 Mom headed out…I couldn’t be in the room while she said bye to Kye. It was too emotional for me and I didn’t want to cry myself! We decided that she should come back the next weekend because she didn’t get to really enjoy him while she was here since we were all just learning about how to care for him and ourselves (and the dog haha)!

After she left, we had our first alone family time! It was pretty exciting and a good feeling to know that this is it. It’s always the three of us now no matter what! We took our whole family on a walk around the circle. I still had to walk pretty slowly because I was so stiff but it felt awesome to get outside and Kye loved being pushed in the stroller! 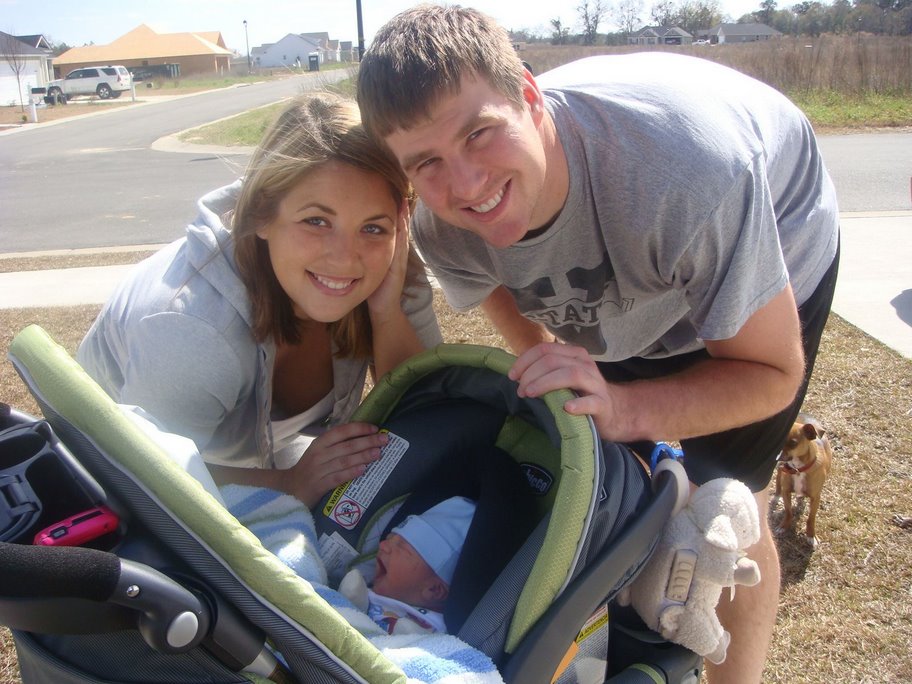 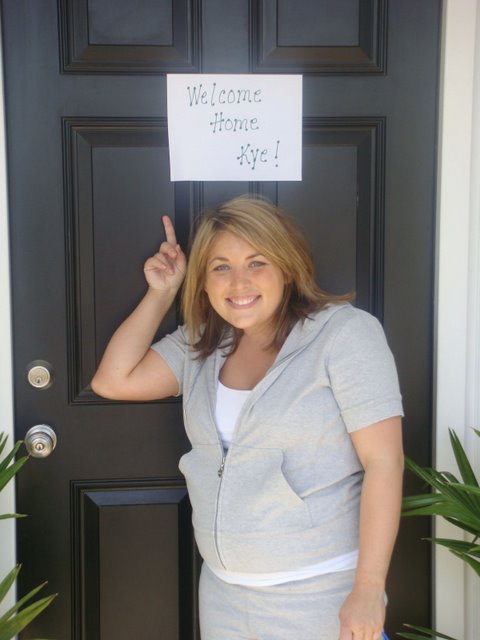 Katie brought us an AWESOME dinner! These really good stuffed shells, an amazing cake for dessert, and GREEK salad!!! YUM! And she brought us caffeine free tea which was such a thoughtful idea. It was so nice to visit with her and it’s so reassuring that even though Kye is here we will still make time for our friends! 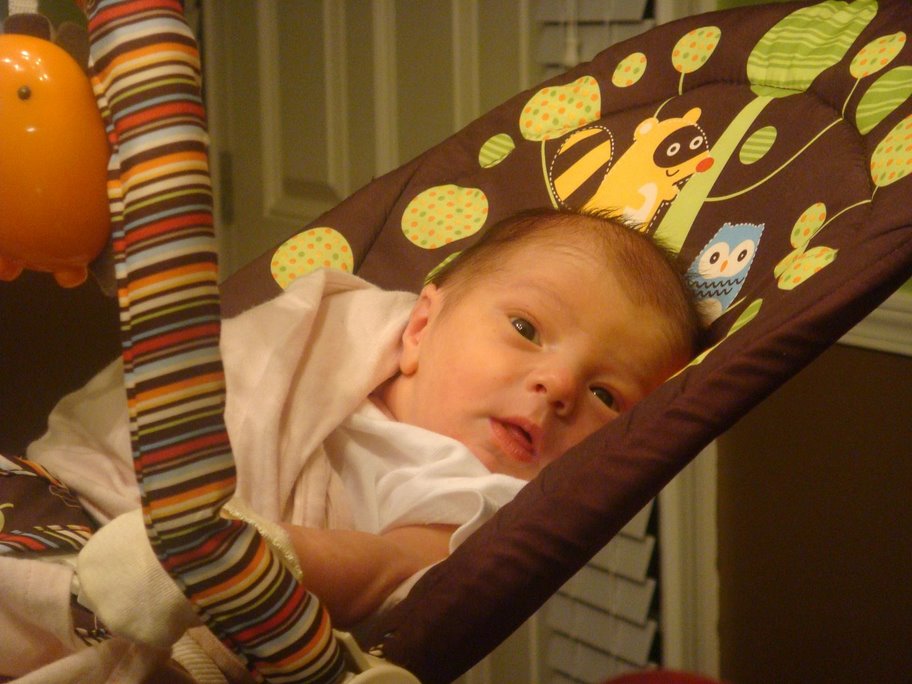 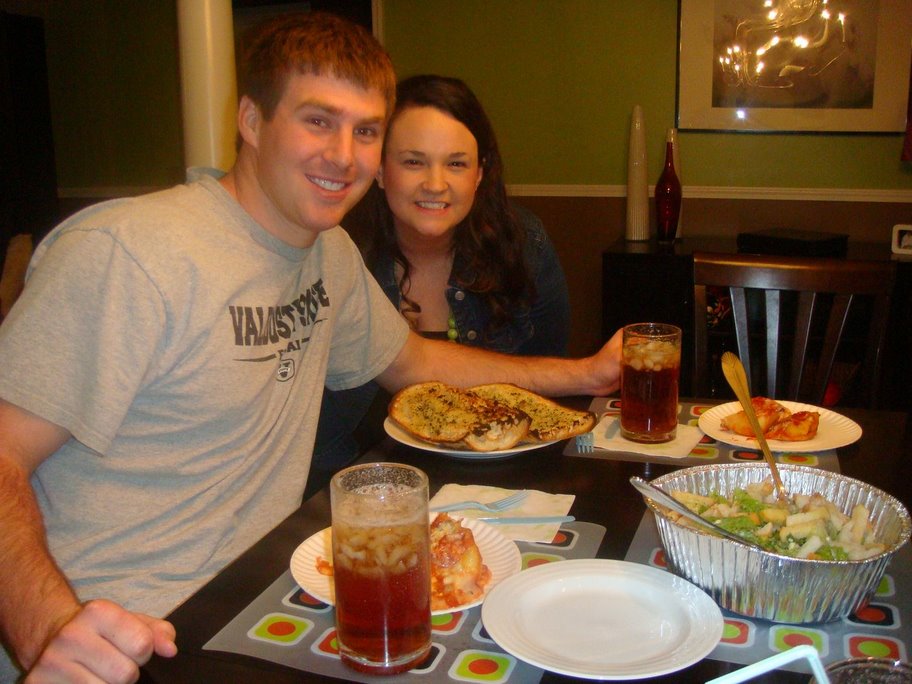 Dad called me and told me he wanted to come the next day! I was a little nervous because I was still getting over the complete exhaustion but I was also excited to see him so I called Charlotte and made plans for her to help me get the house ready for him the next morning! 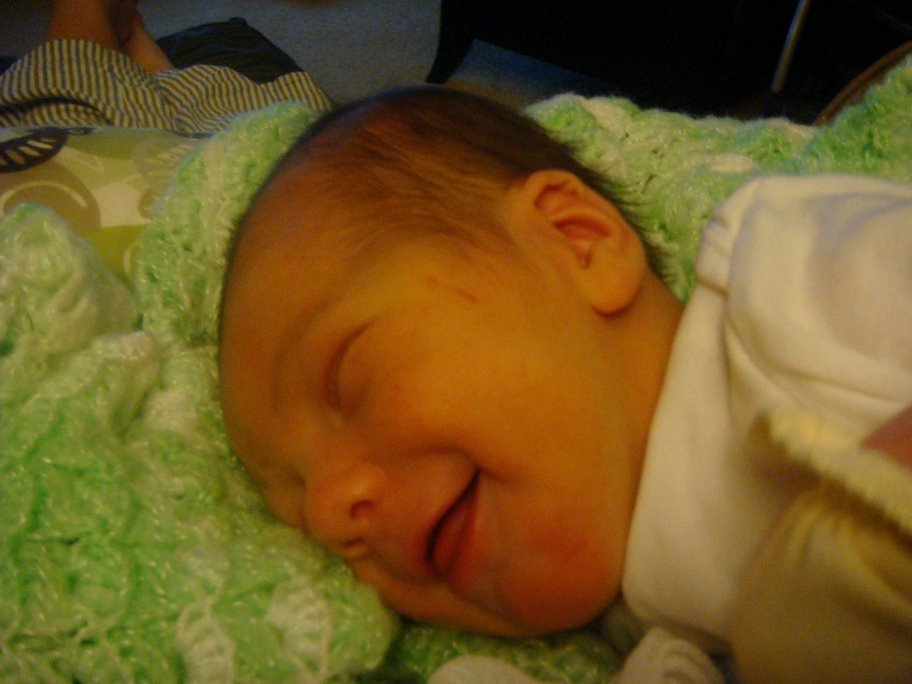 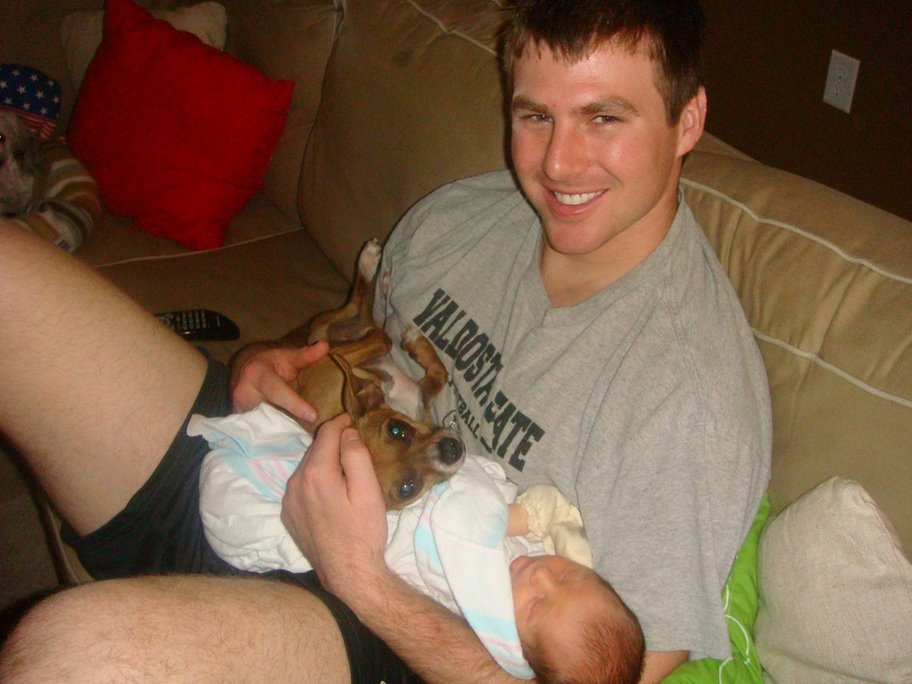