Soon after I had Tess the hospital called me and told me that there were issues with the blood work they took from her during our stay. Something about the way they reported it made it impossible to read and get results from. Of course it’s one of those major tests that rules out like 28 different problems your baby could be born with. Ugh. They wanted me to bring her up to the hospital to get the blood drawn again and they wanted me to come on a Sunday. While I wasn’t yet attending church with Tess, Zach was taking the older kids so it was a day of legit REST for me! I wasn’t about to go through all the work of getting ready just to take her to get blood drawn. I mean why didn’t they do it right the first time, ya know?

When I didn’t show they weren’t too happy with me! They kept calling and even sent me a text! I called them back and told them I had Tess’s visit to the pediatrician on Tuesday August 12th at 1:15 and that I could come by there right after. They agreed so it worked out much, much better. I’m usually a mega rule follower so I felt super rebellious not showing up the first time, but I’m glad I didn’t! It worked out WAY better to just mess up one nap totally for her than to have to do it twice!

I planned to take Tess to her visit at the pediatrician by myself. I had a bottle ready for her 1:00 appointment time (more on the bottle in her weekly summary post). Our pediatrician closes down for lunch from 12:00-1:00 so it was super nice of them to give me the first after lunch appointment. Zach got the big kids from school and down for naps and I took Tess. I was fine with going solo but did ask Mrs. Charlotte if she wanted to go. I thought Zach went to Kye’s first visit but I just re-read it and I actually handled that junk solo haha but my mom went to Britt’s. So it’s nice that G-Mama came to Tess’s!

She slept in the car until I got to his office and I waited in the parking lot for them to open before getting her out in hopes that she’d stay asleep. She was late for her feeding but she did awesome (ate 3 oz!). While I did all the paperwork and such Mrs. Charlotte fed her and she ate great! 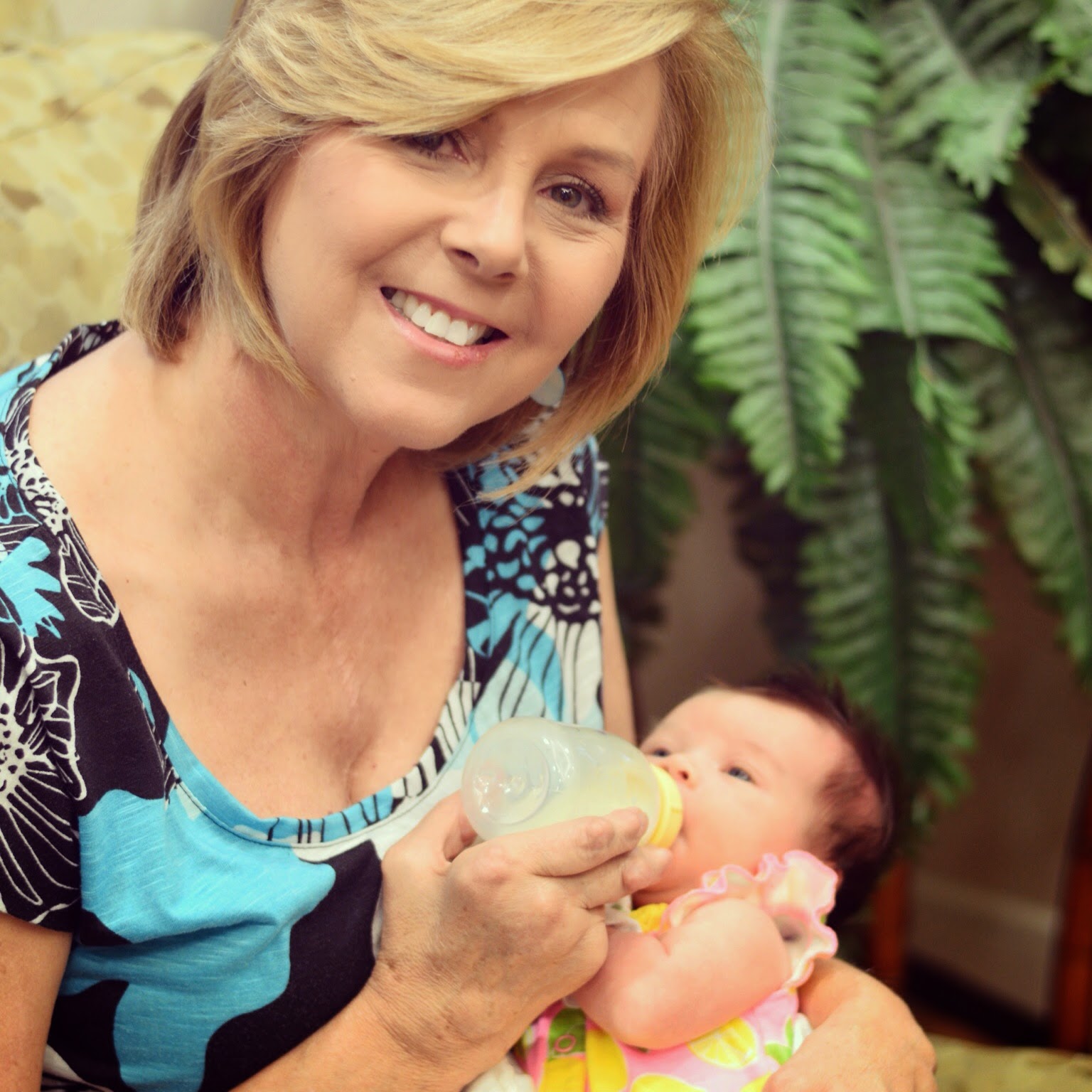 It’s SUCH a blessing to be well established at the pediatrician. It doesn’t hurt that Zach is their Aflac agent either 😉 It was so sweet of them to get us such a great appointment and we had barely any wait at all! While we were waiting there was this mom in there that was one of those “scream talkers” every word she said to her child sounded like she was yelling at him. It was so awkward!!!

It was Mrs. Charlotte’s first time coming to our pediatricians’ office (both Courtney and Casey use different ones in town for their kids). For the first visit we always see the legit dr, and he’s awesome, but I LOVE the physicians assistant there and honestly would have rather seen her 😉 Plus she is always SUPER complimentary of me and it would be nice for Mrs. Charlotte to hear someone brag on me haha!

First thing first, they took her stats. Tess weighed 7 lbs even at birth. 6 lbs 10 oz when we left hospital and then 6 lbs 14 oz at her 2 day hospital visit on Saturday August 2nd. It’d been 10 days since that appointment and she weighed 7 lbs 11 oz!!! I was shocked! It’s also funny to me that she still weighs less than Britt’s birth weight! 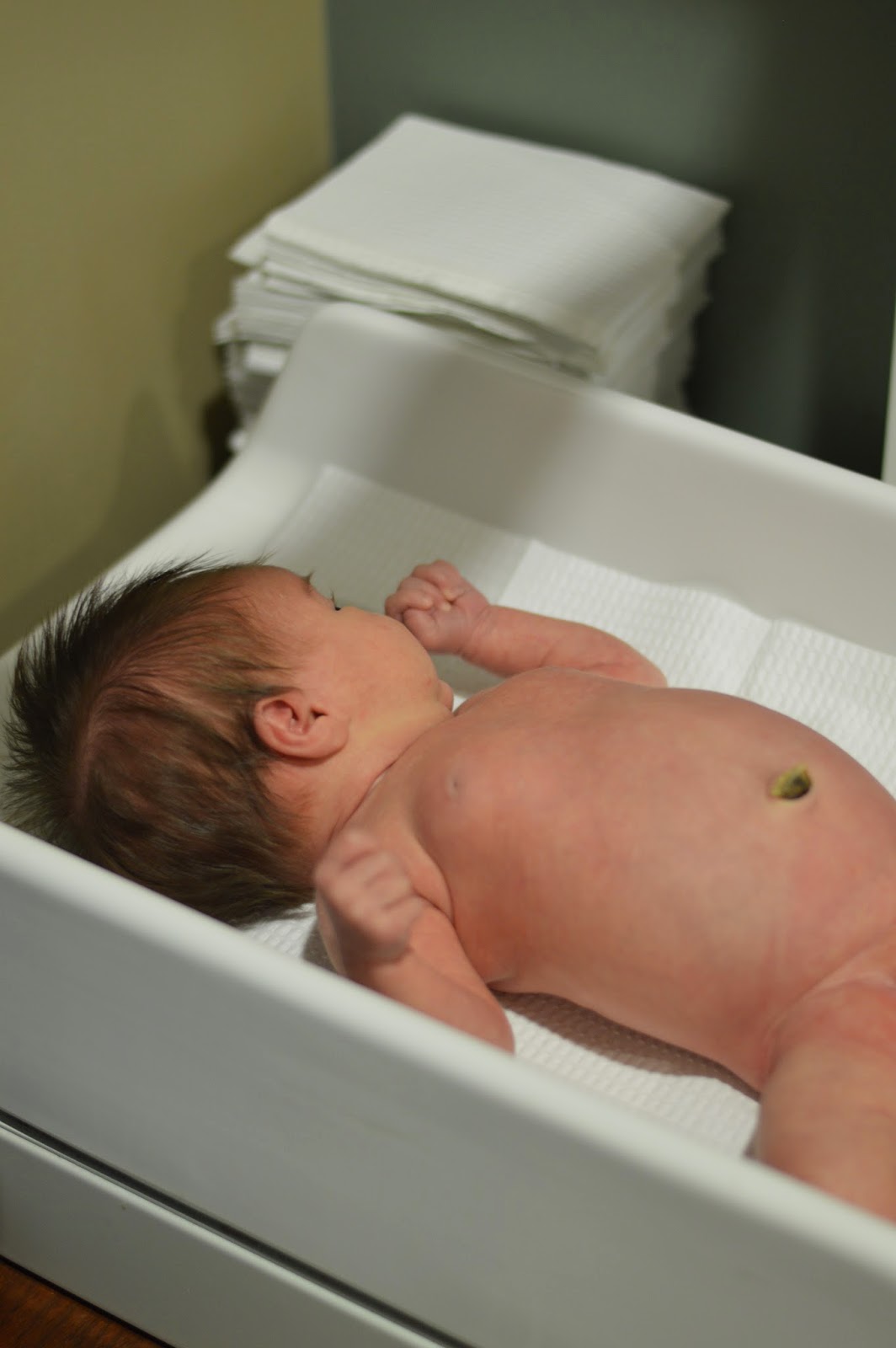 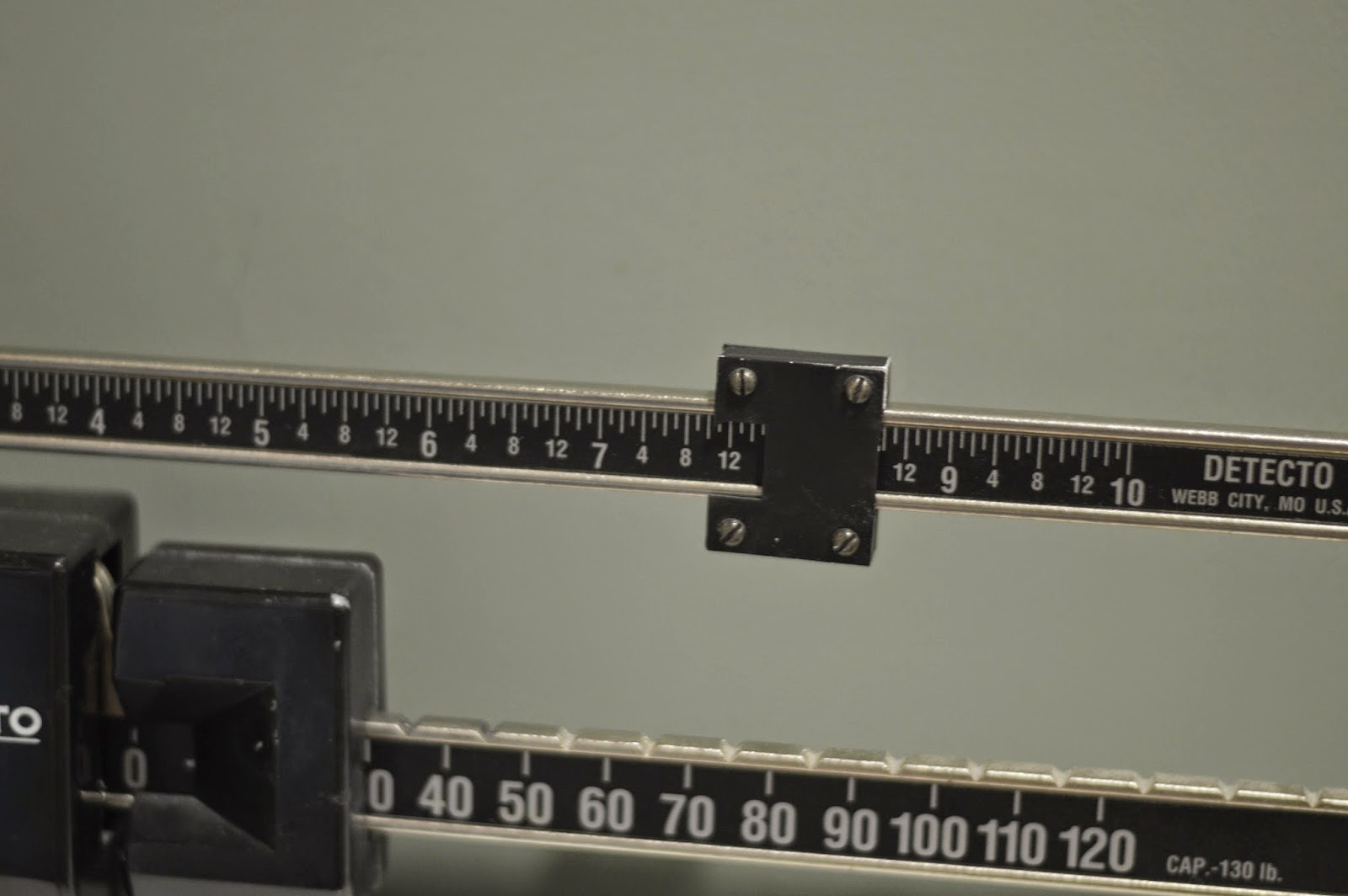 It was so funny because when I was taking these pics Kelly, the pa I adore, came by and said she saw my camera and assumed I was a first time mom hahahaha I swear my 3rd baby will have more pics than my first (if she doesn’t already!).

The dr. came in and checked her out. Here’s some stuff we discussed:

Tess did amazing at the appointment. ZERO fussiness!!! She was a dream baby 🙂 So thankful for her health!!!

You can see Kye’s 1st appointment here and Britt’s here! 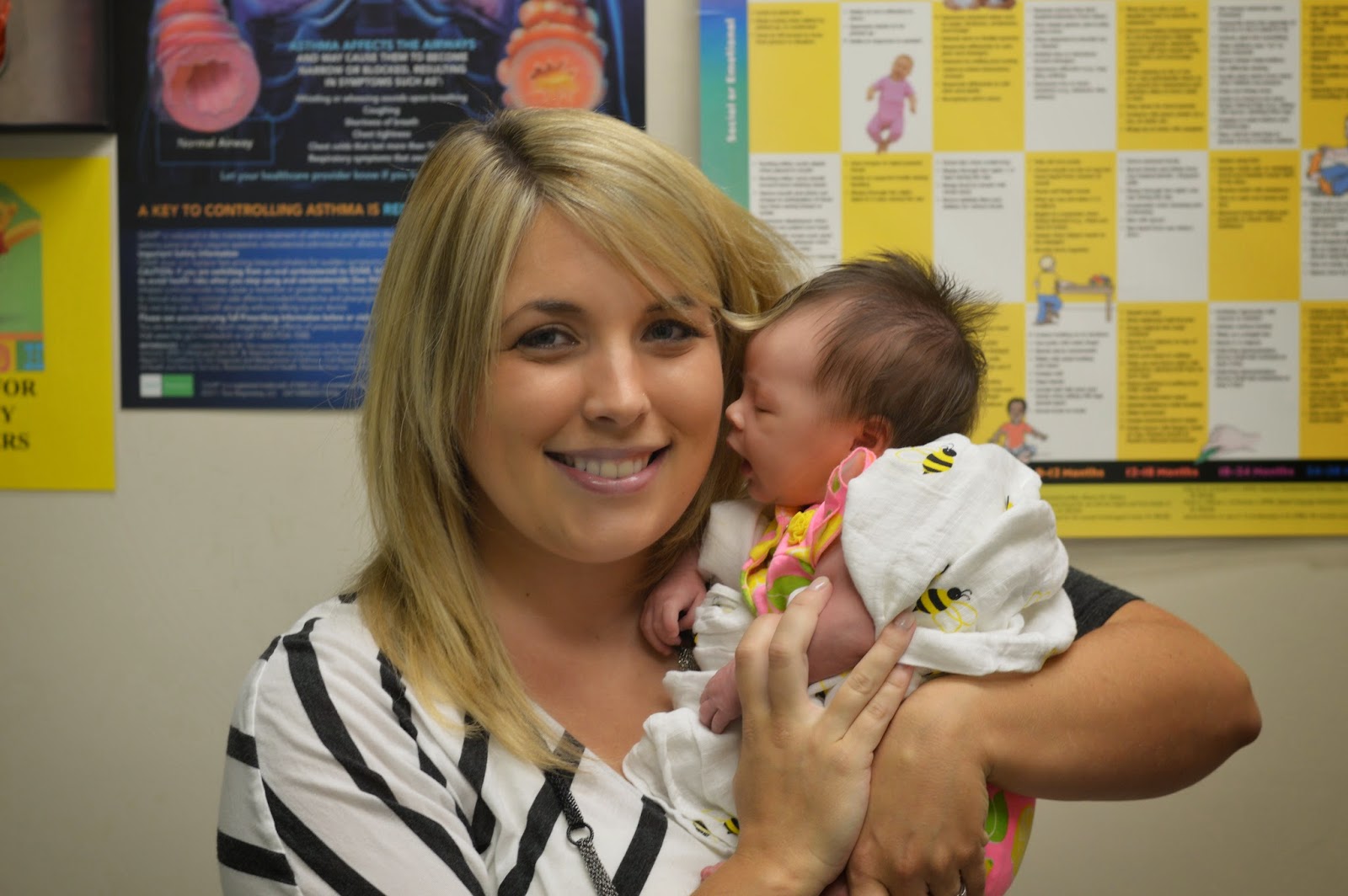 I only use mittens in the car because I worry she’ll scratch her face! 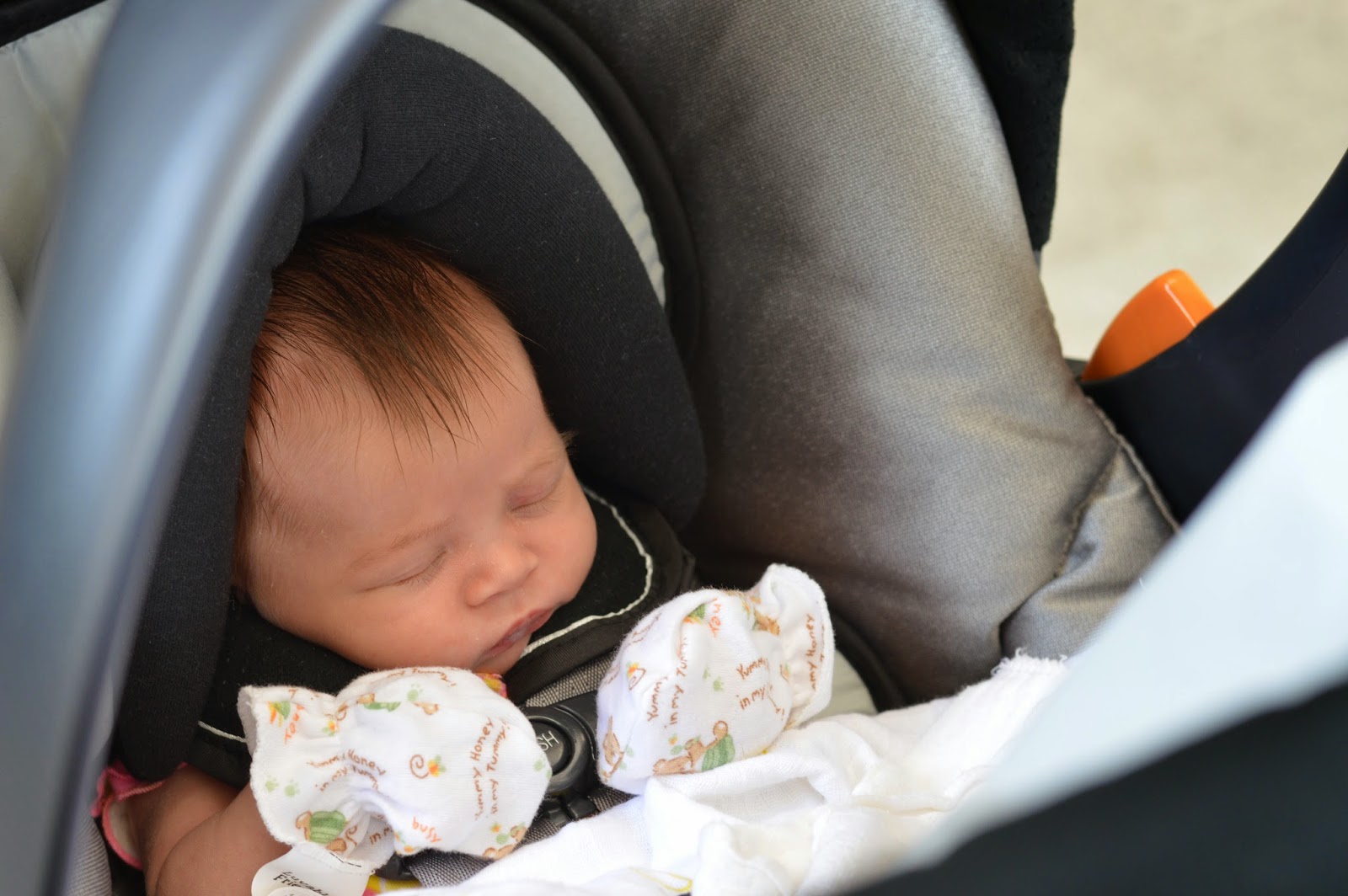 I also planned to do the hospital stuff on my own as well but Mrs. Charlotte wanted to come! We had a good plan of action…I brought the stroller haha. I didn’t want to have to carry that heavy car seat all through the hospital and I also didn’t want to get her out of it. I didn’t feel the least bit silly walking in pushing a stroller 😉 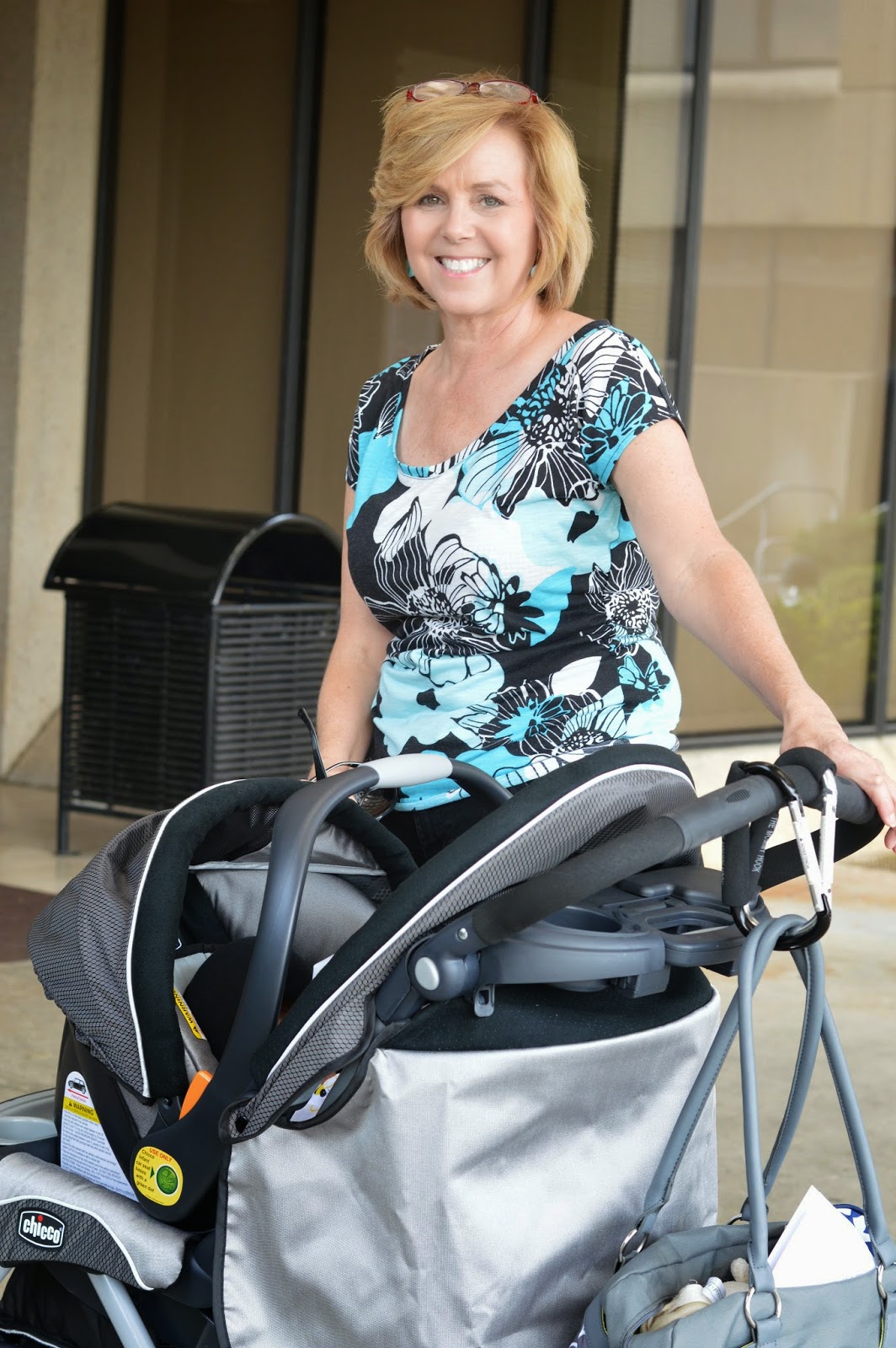 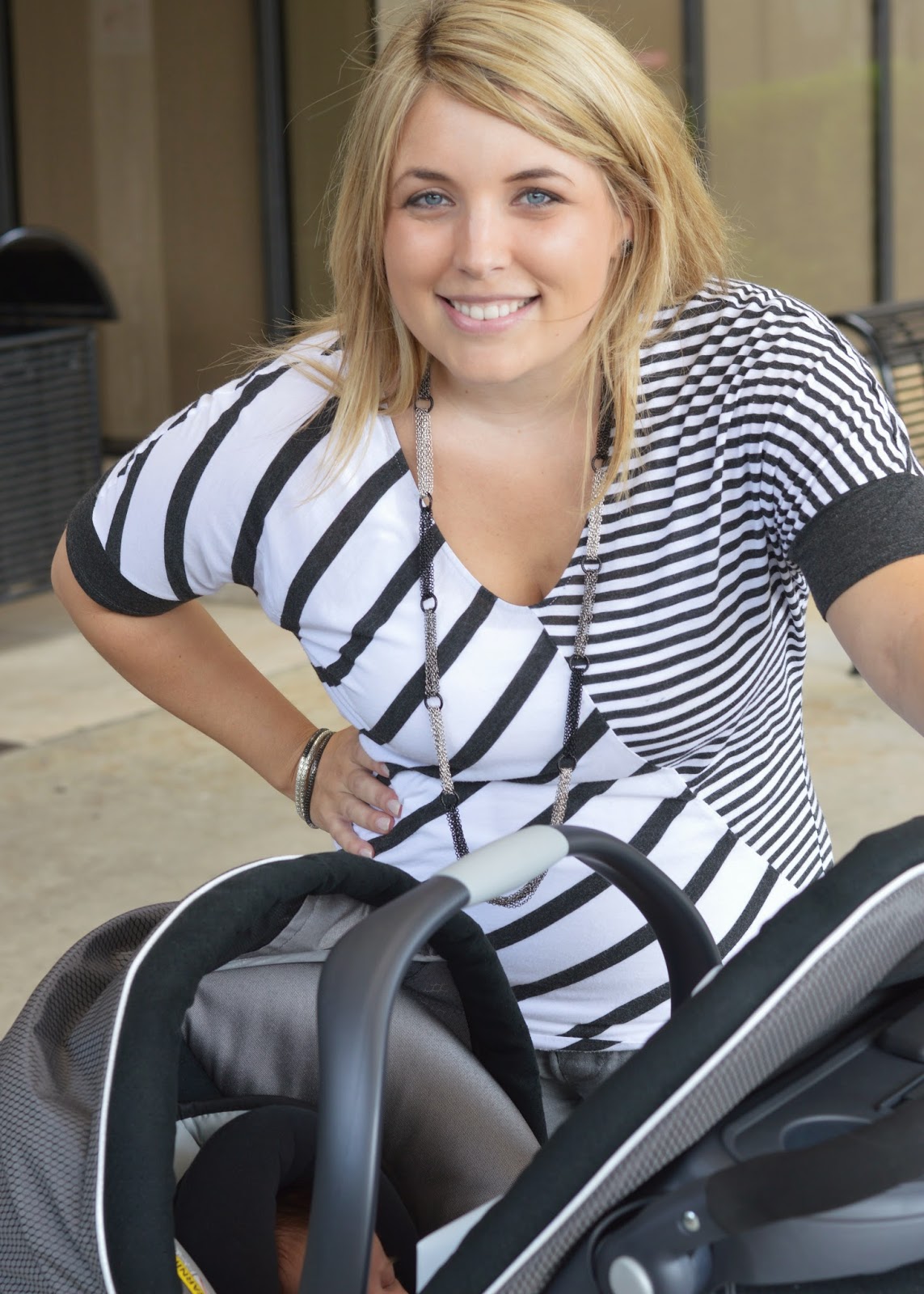 When we got there we were the only ones there which worked out great! The nurse put a little warmer on her foot while she was sleeping (so glad we had her in the carrier!) and then she talked to us for a long time haha. Finally she pricked her and took so much blood. Tess did fine with the prick but I did not like how much blood they needed! I hate that they had to do this junk twice. Ugh. Thankfully it didn’t take too long and she said she for sure got it done correctly to be able to test it. We never heard anything back so I assume she tested fine for all the different issues!

We ran into the lactation consultant while we were there and, duh, I totally bragged on that great weight gain haha! There is nothing that makes a breastfeeding mom prouder than her newborn putting on weight 🙂

I’m thankful Mrs. Charlotte came to both appointments with me! It’s so special that Tess has such an involved G-Mama. So thankful for a successful day and great news all around!!! Tess did AWESOME and I only hope that will be a trend that continues when we visit the dr in the future 😉