For our anniversary last year Zach told me as one of our presents that we’d be going to the FSU/UF game in the 2010 football season! I was THRILLED as it’s always been something I’ve wanted to do. What? ME? Always wanted to go to a football game? I know it seems hypocritical but my dad went to FSU and I went to FSU and attending a D-1 college football game is just real football to me. When Zach started hunting for tickets to the game he found an awesome deal that would get us a packet of tickets to THREE games this season. Score!

The last time I attended a FSU football game I was a student there (back in 2003…SEVEN years ago yikes!). Here’s a picture with my roommate Kim outside the stadium! 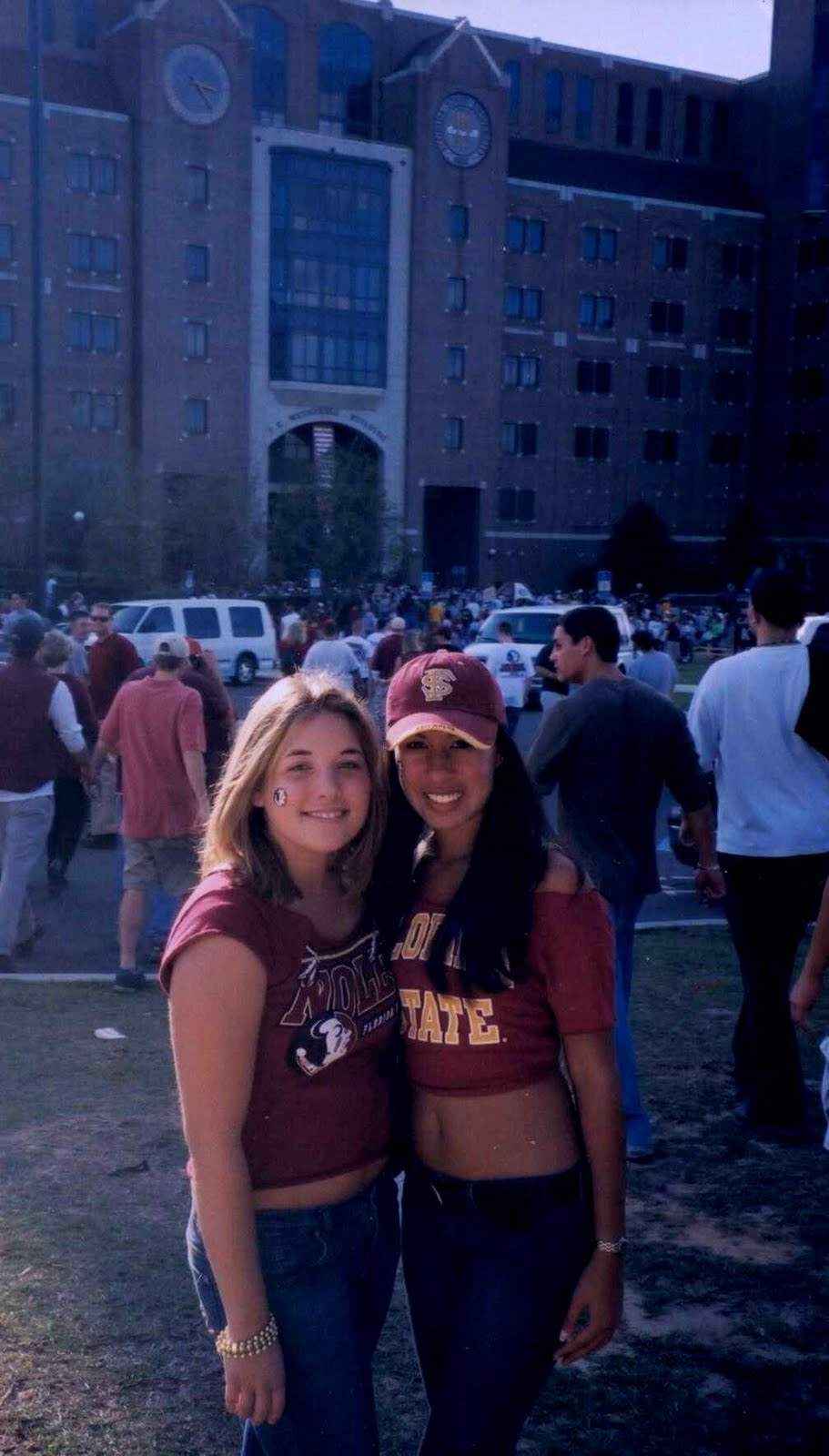 The first game in our ticket set was for FSU vs BYU on Sept 18th at 3:30. Originally we planned on leaving Kye with Mrs.Charlotte for the day but then Mr. Rusty got UGA tickets so we decided to take Kye with us. This game was a LOT of firsts: Kye’s first FSU game, my first FSU game with Zach, and Zach’s first FSU game at the “new” stadium. Zach was pretty nervous about how Kye would do seeing as it was an hour and a half drive there, then a 4 hour game, then another hour and a half drive home. We left at his nap time and he did great in the car! We got there super early so we took our time getting to the stadium and relived some of my days on campus. 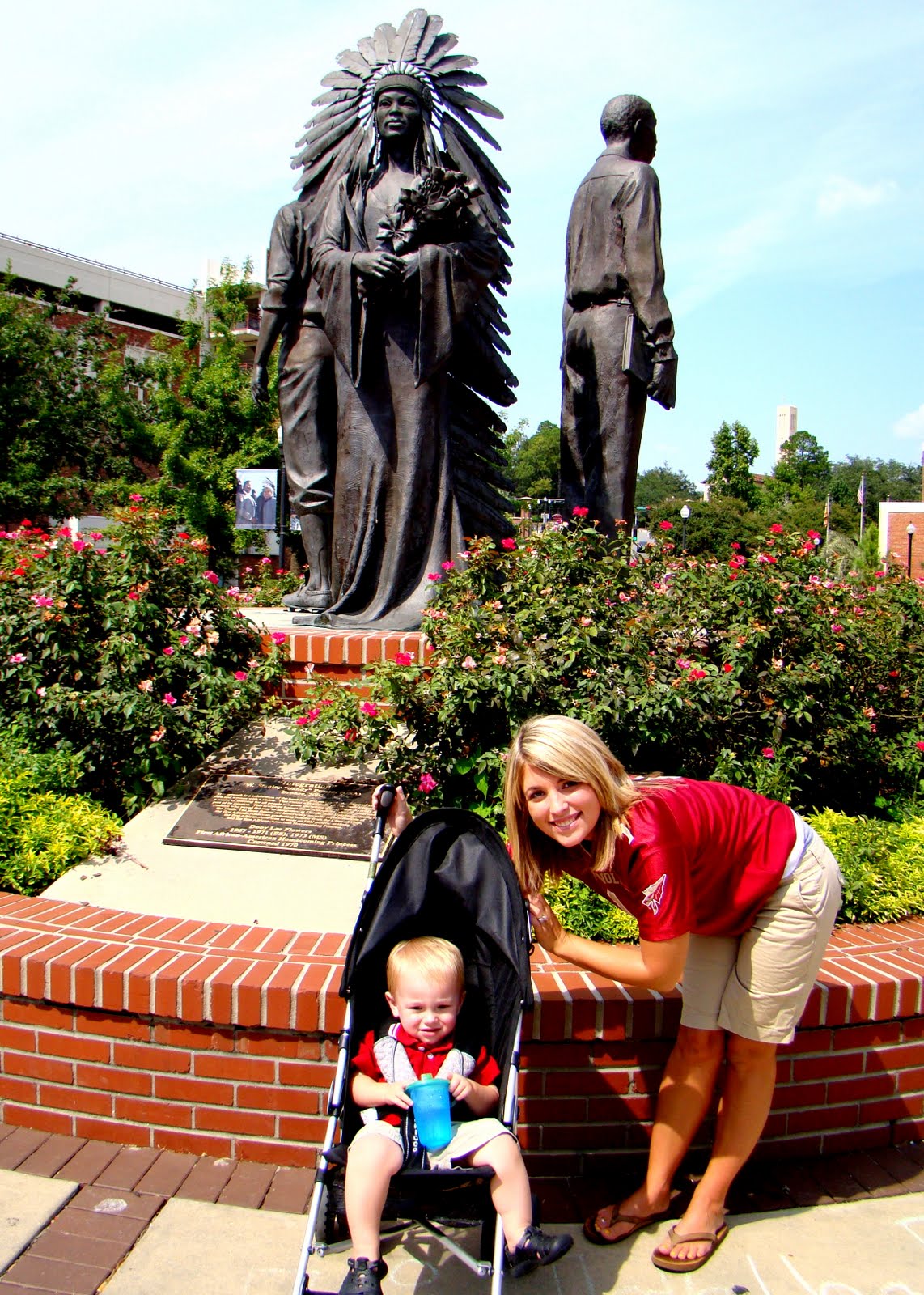 outside the “new” stadium 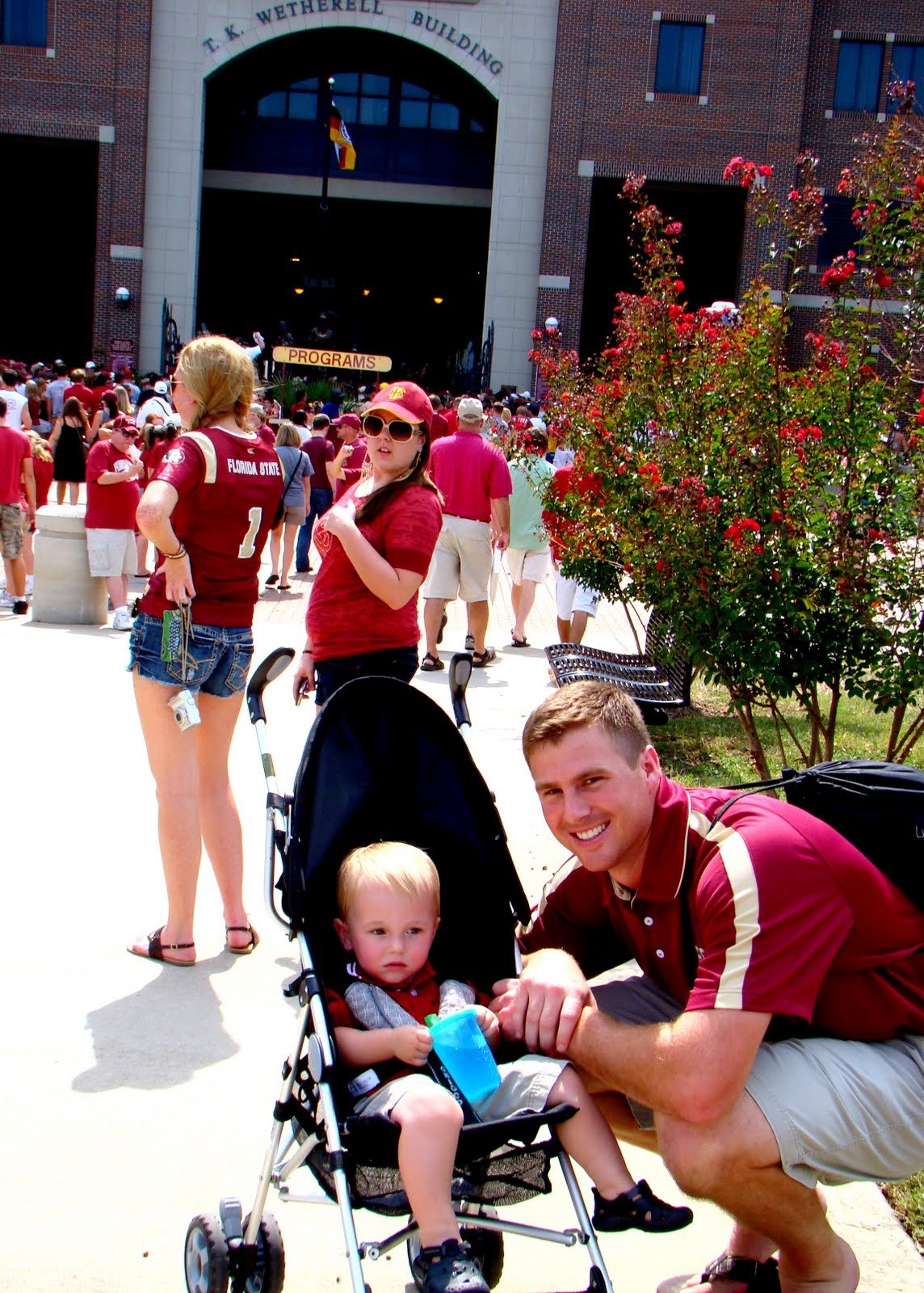 We got in the stadium and to our seats right when the teams were announced. It was perfect timing as the people behind us also had a son close to Kye’s age and they said they got there WAY too early. Kids attention spans aren’t very long and we didn’t want to “waste” the early time in the stadium on just waiting for the game to start since we knew that’s when Kye would behave the best. To Zach’s surprise, Kye behaved WONDERFULLY the ENTIRE game! I honestly thought he would be fine, but I never expected him to have so much FUN! Here’s pictures from our awesome day as a family!

we met when I was an FSU girl 🙂 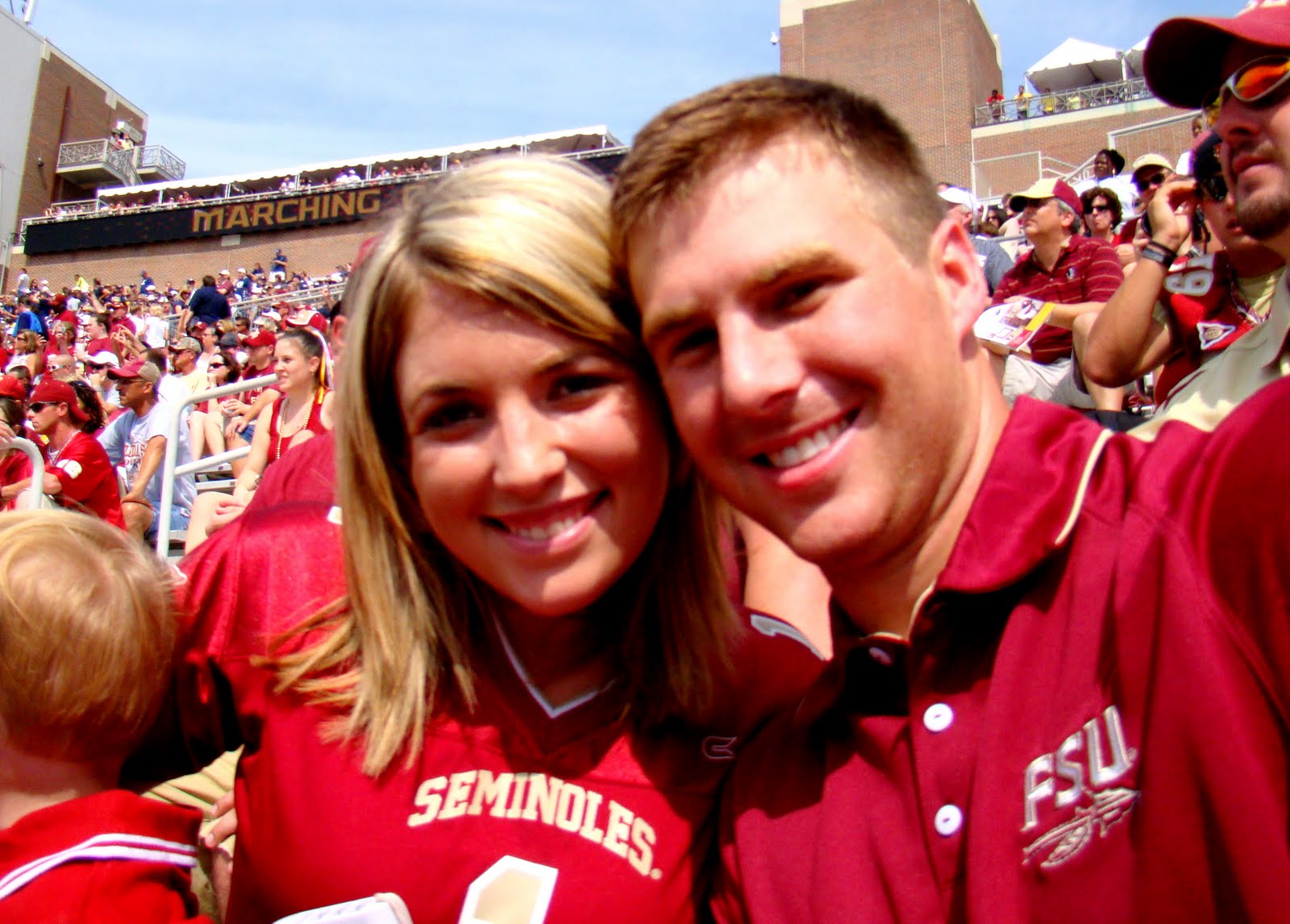 I love these, during the National Anthem 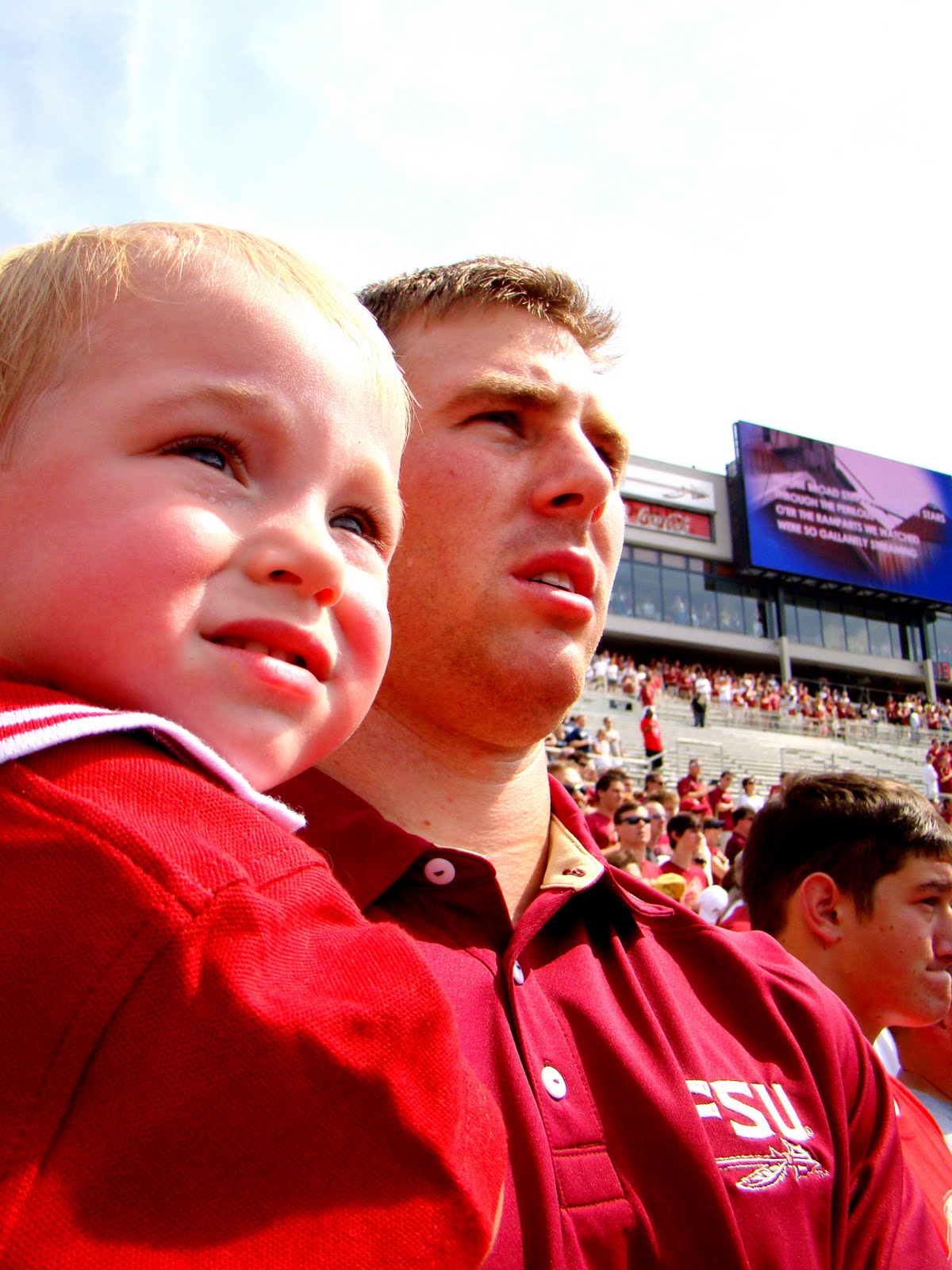 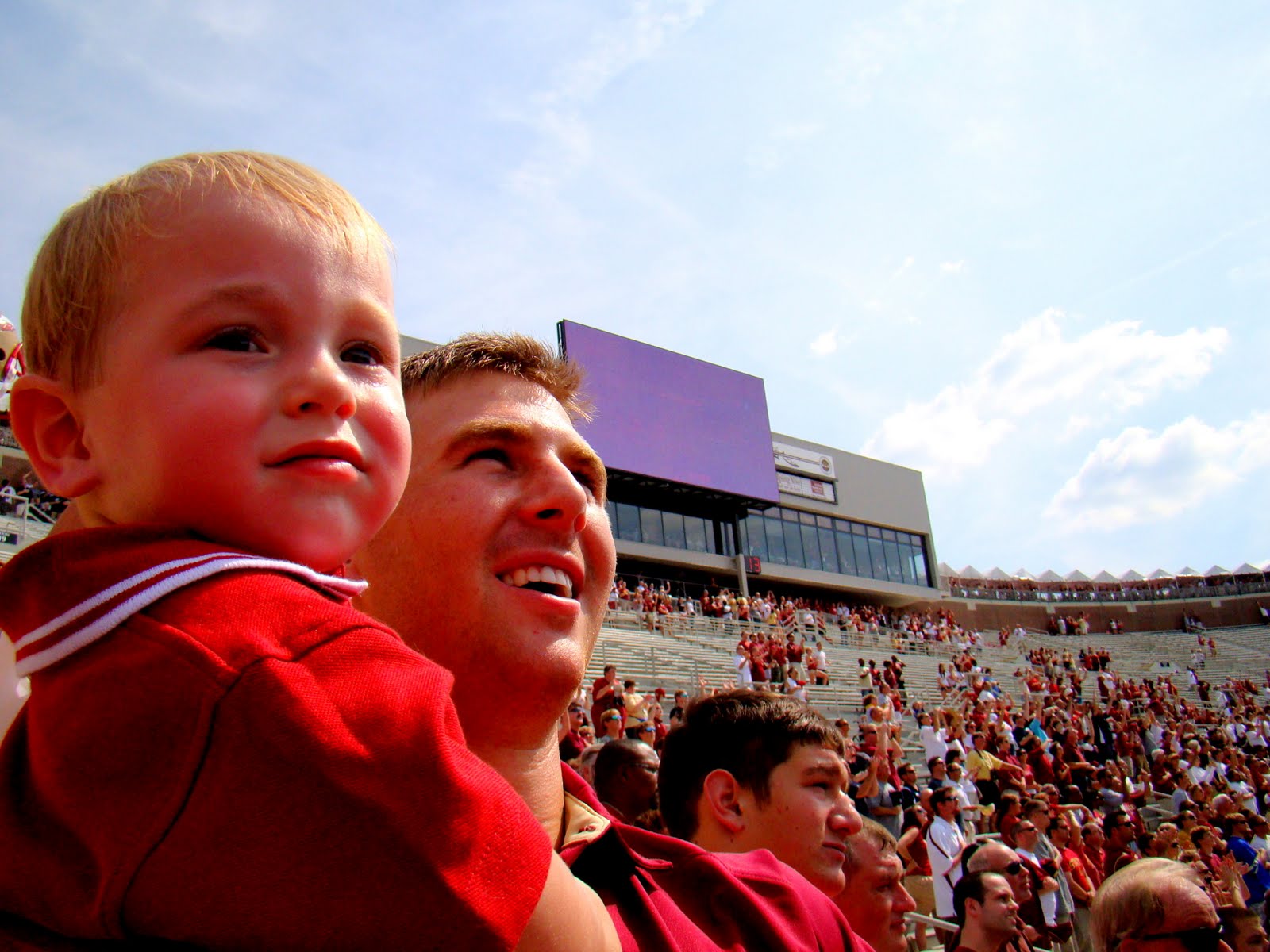 Chief Osceola (PS: one of the reasons I’m hesitant about investing in a DSLR is that my camera has a built-in 15x optical zoom…pretty great huh?) 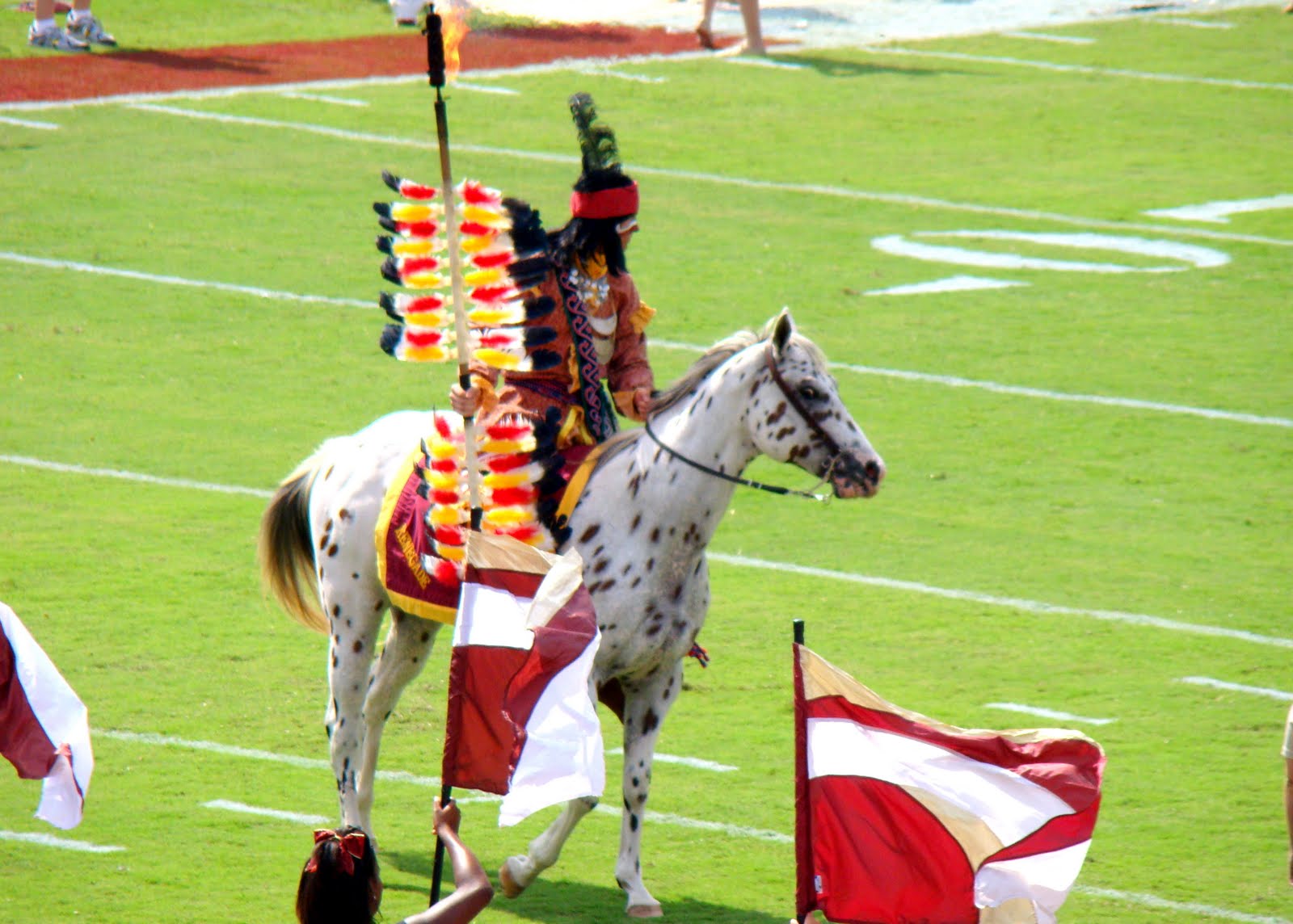 pointing at the “horsey” 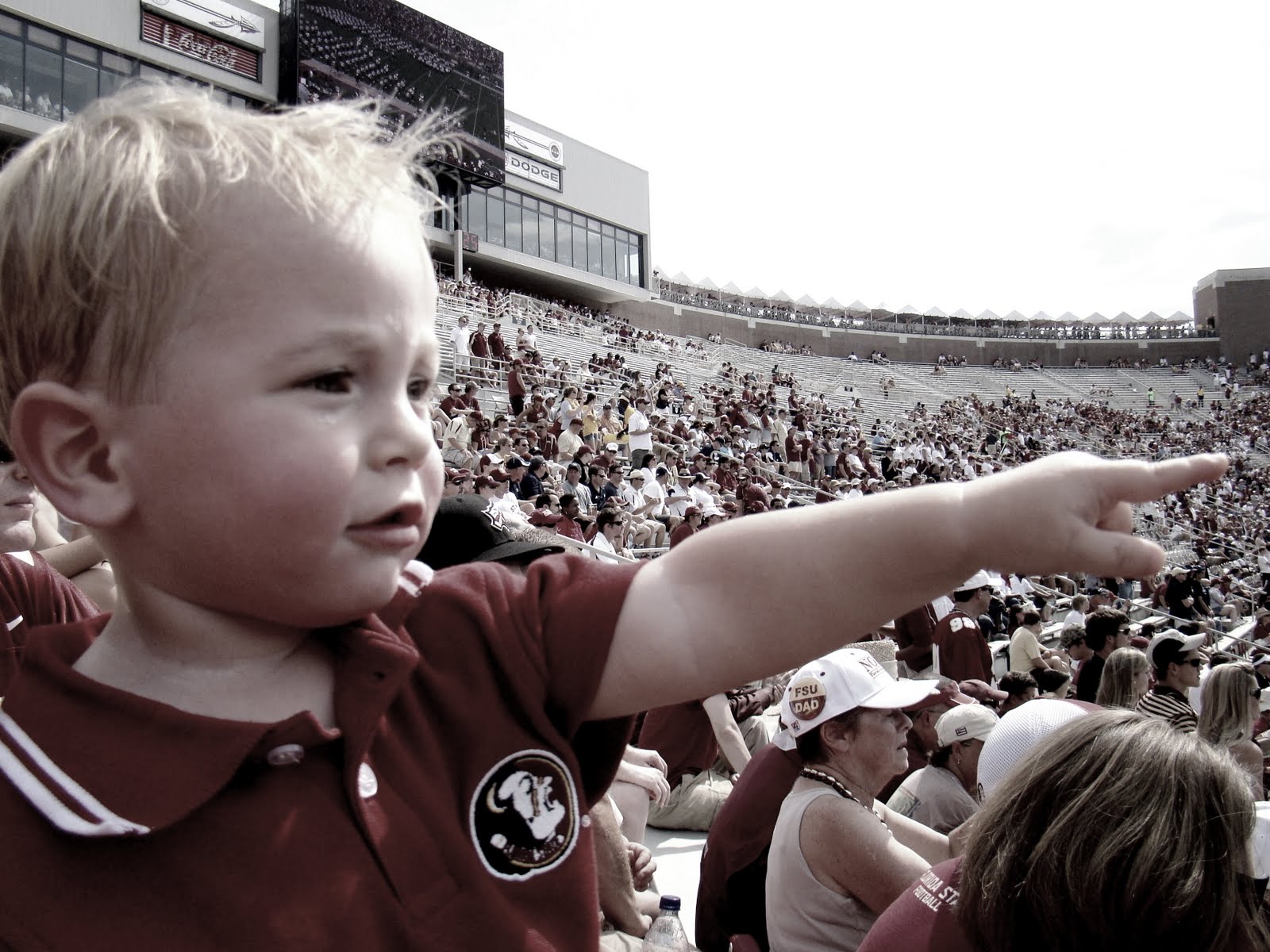 it’s such an awesome feeling to be part of something so big! 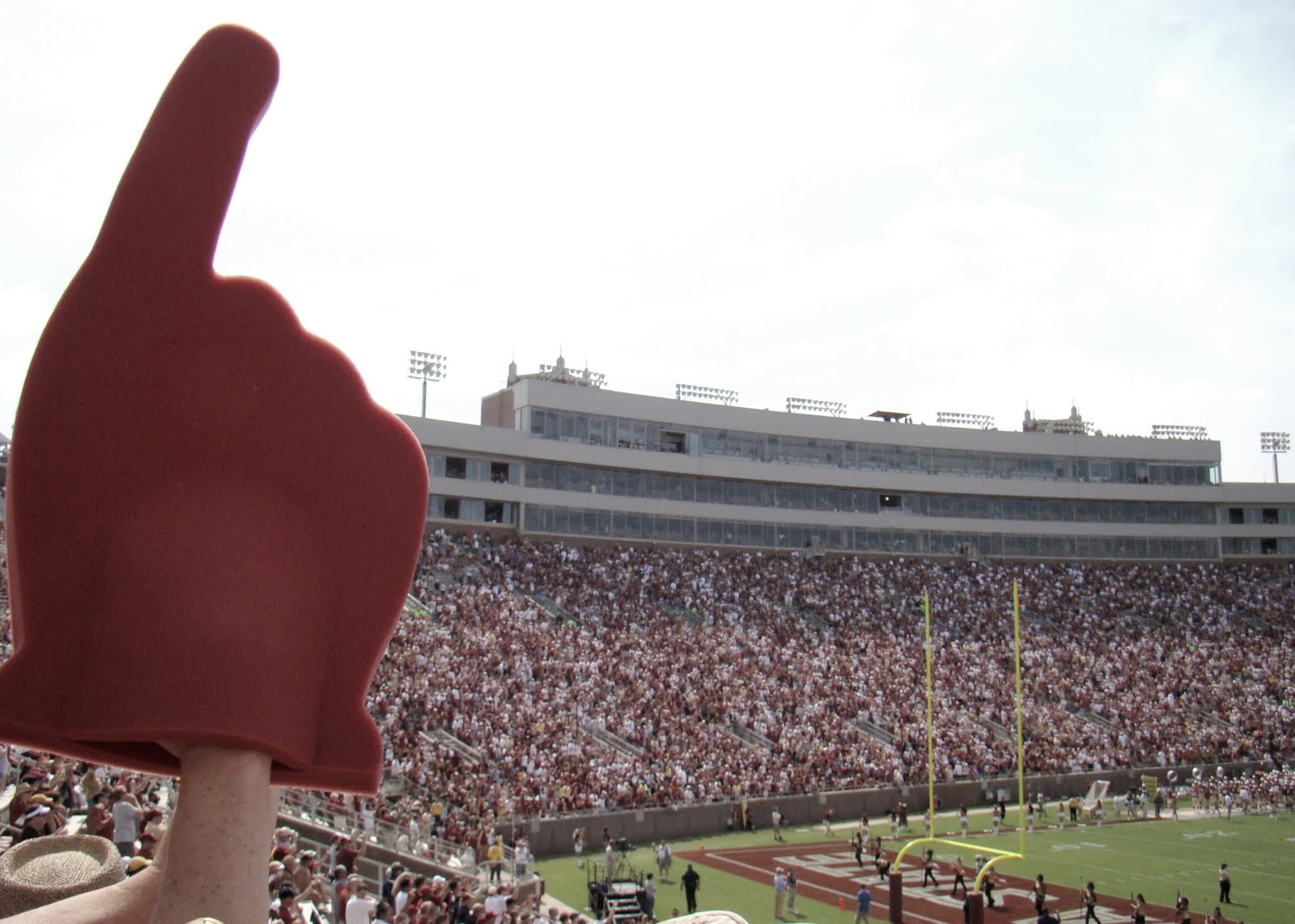 It was great that the game was at 3:30 b/c that meant Kye could go with us…it was also terrible that the game was at 3:30 as it was SCORCHING hot! I think the car said it was 98 degrees…but it felt like 120. I was instantly drenched in sweat and Kye’s little cheeks were bright red. I’m SO thankful I put sunscreen on him before we left and that I brought it with us as I reapplied it like every 30 min. We all were SO thirsty so we broke down and bought the $6 souvenir cup and they refilled it for me for free. Kye loved pouring his water sippy in the empty cup and drinking it. I didn’t mind when he spilled it all down the front of him b/c hey, it kept him cool! 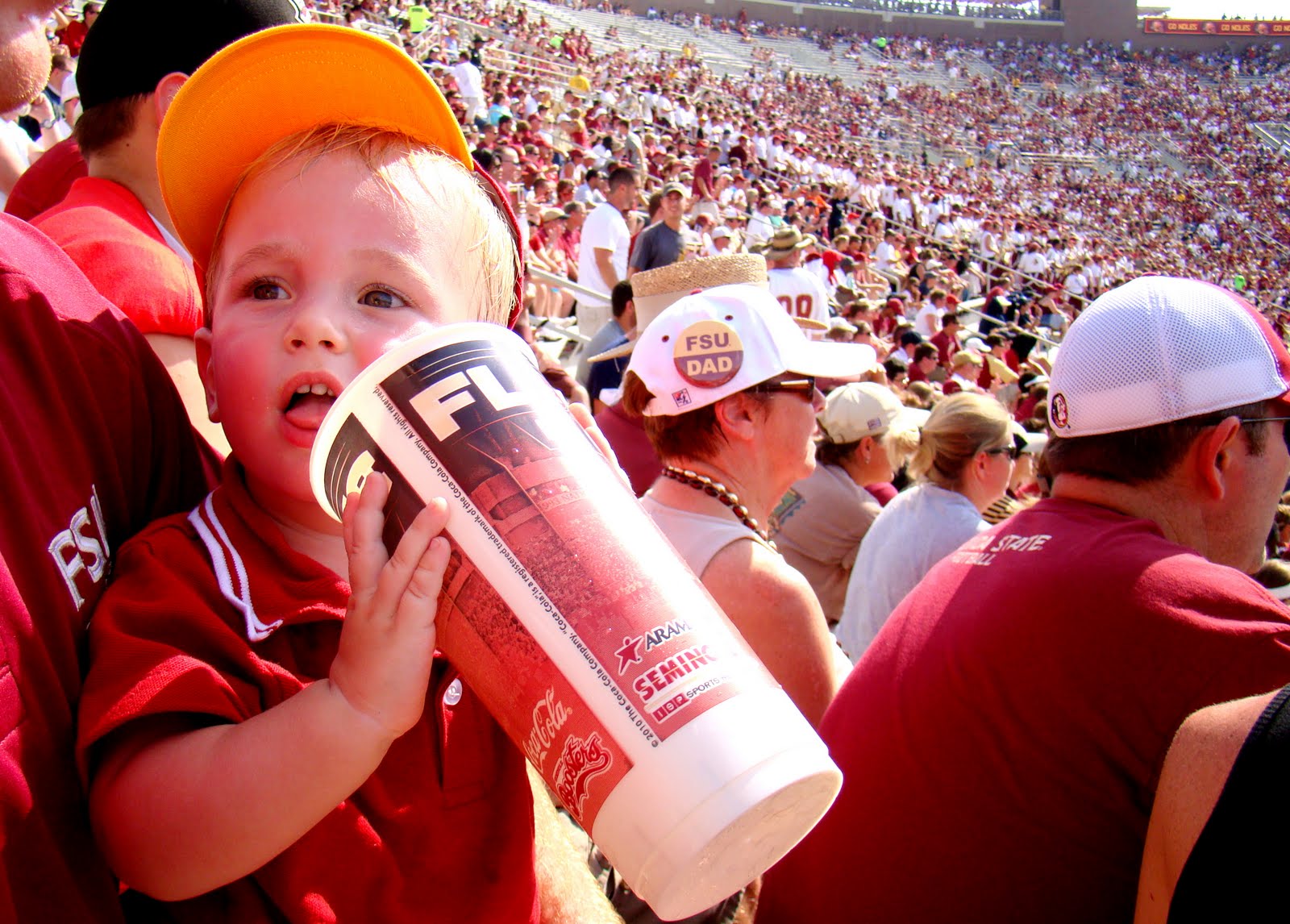 Yes, this is a crotch shot. Yes, it’s soaked through with sweat. 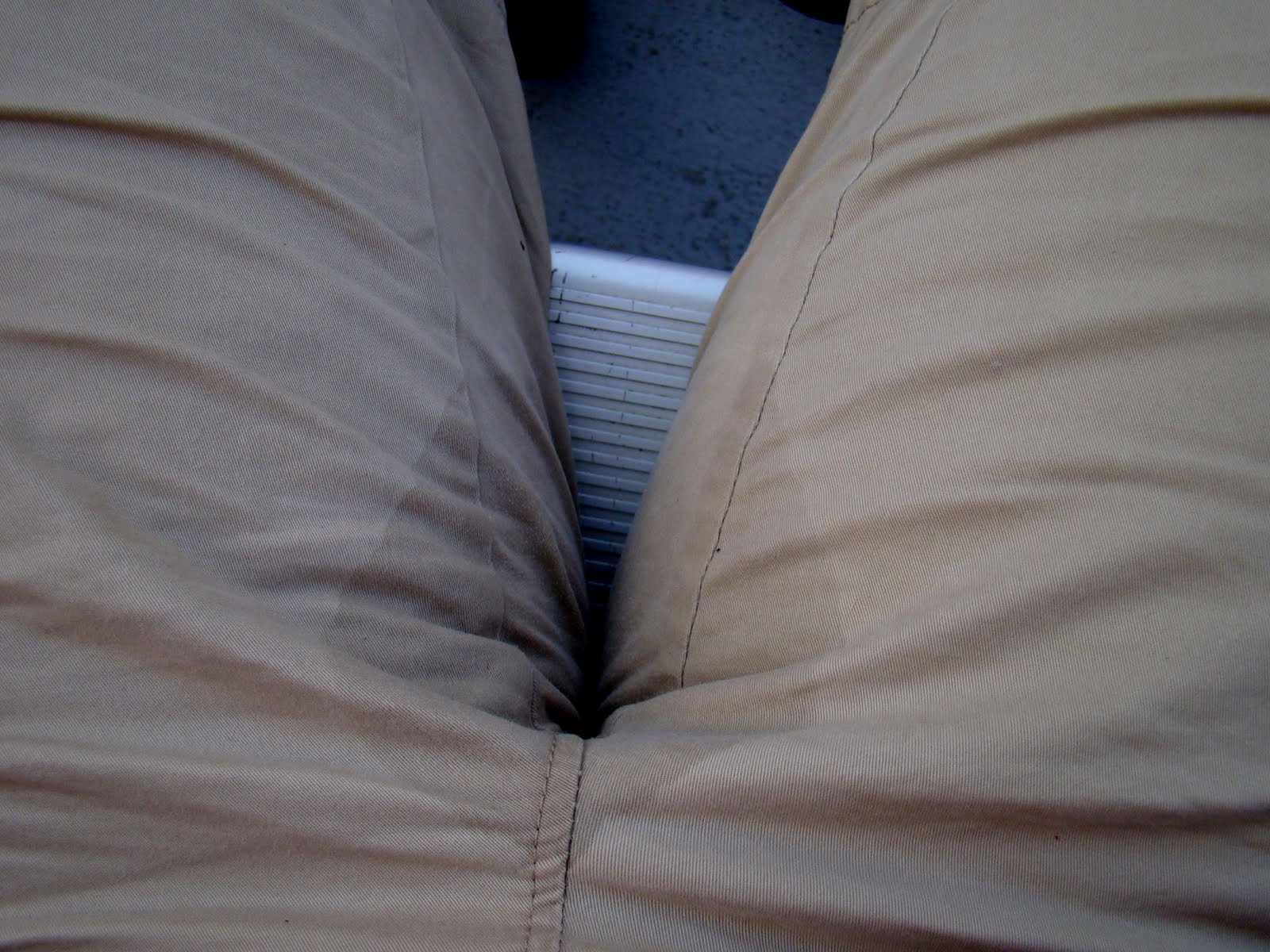 During halftime we moved up further to a section that was covered in shade. I’m not kidding, it was 20 degrees cooler up there! Even though it felt better, the damage was already done to my look. Thank the Lord Zach bought me this hat when he gave me the tickets for our anniversary! 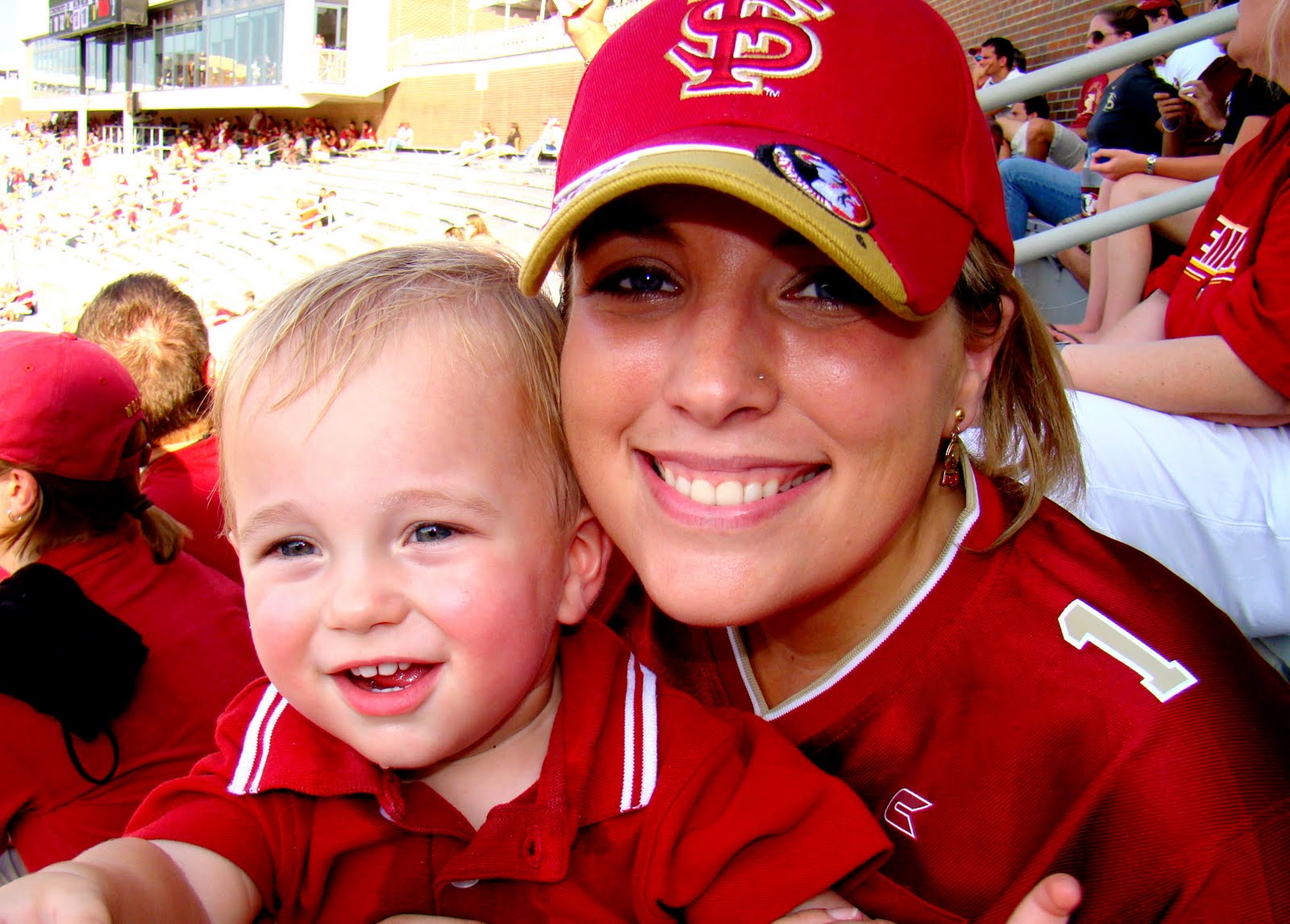 The key to keeping a toddler happy at a football game is to bring LOTS of food, LOTS of toys and to keep him as involved as possible. Kye LOVED stomping along with the rest of the crowd and clapping whenever the crowd cheered. While he didn’t quite learn how to do the Seminole chant, he did start saying “Go Noles!” It was too cute!

his magnadoodle came in super handy (another little girl was sitting near us and they each had one and shared!) 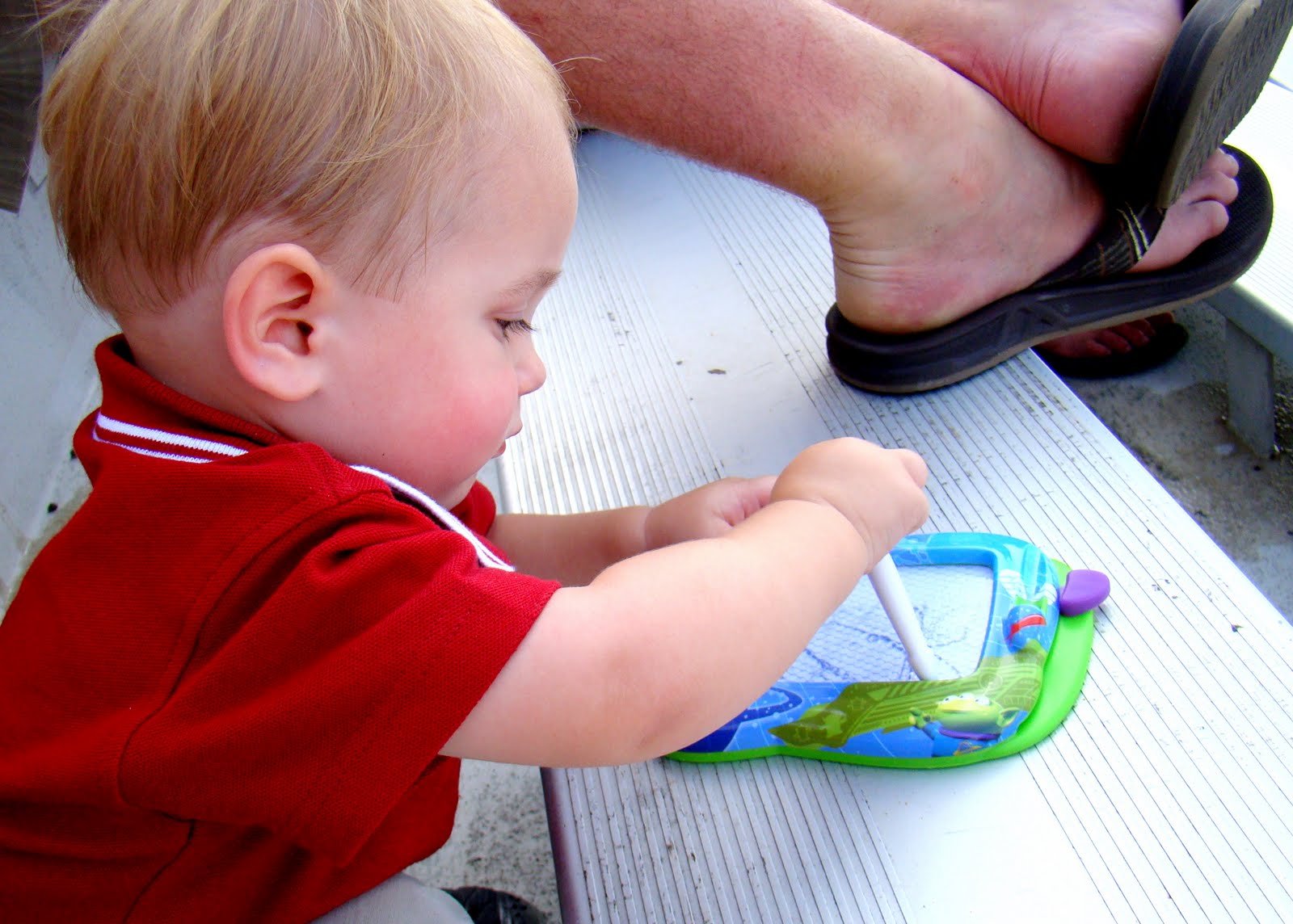 love seeing the sea of garnet and gold 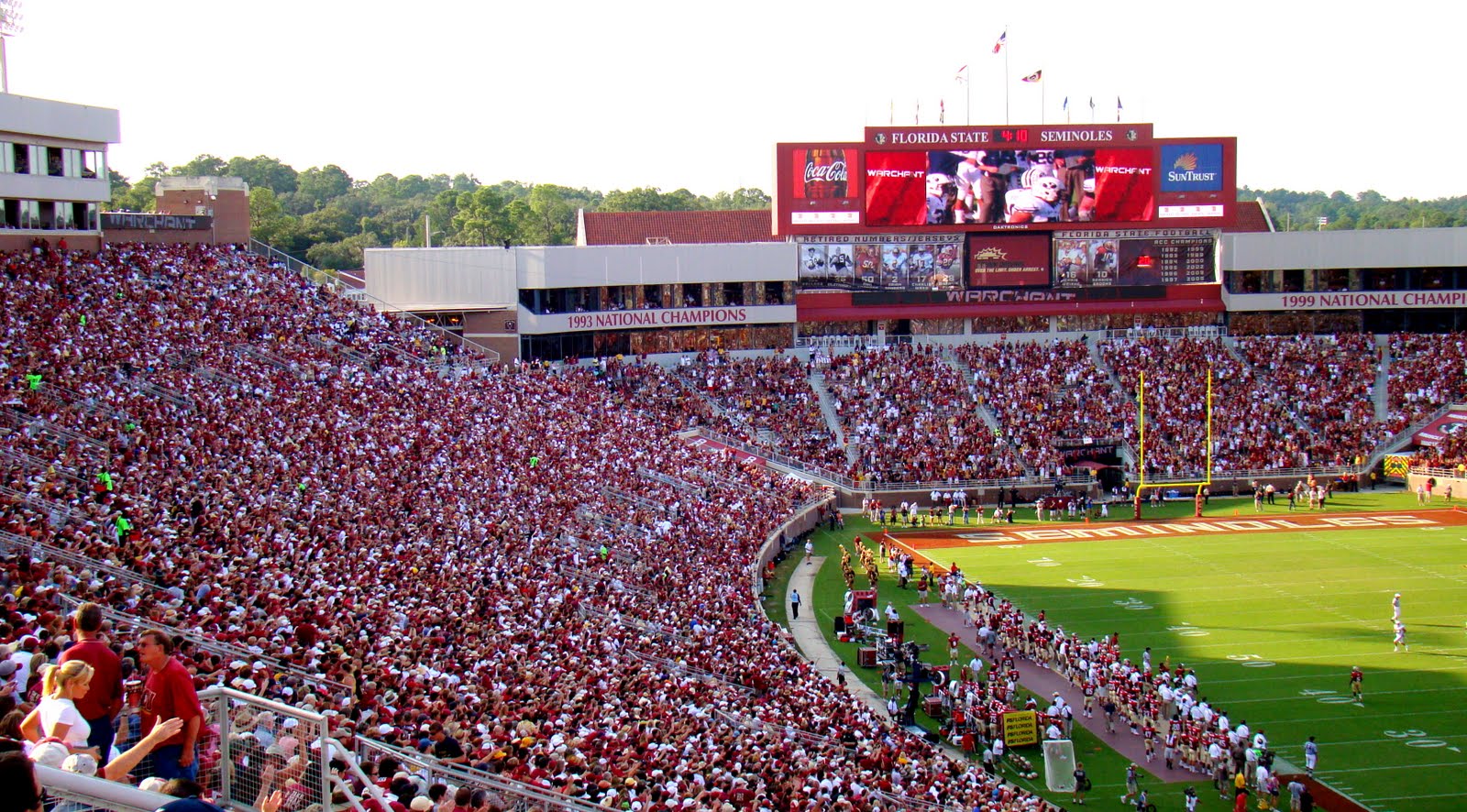 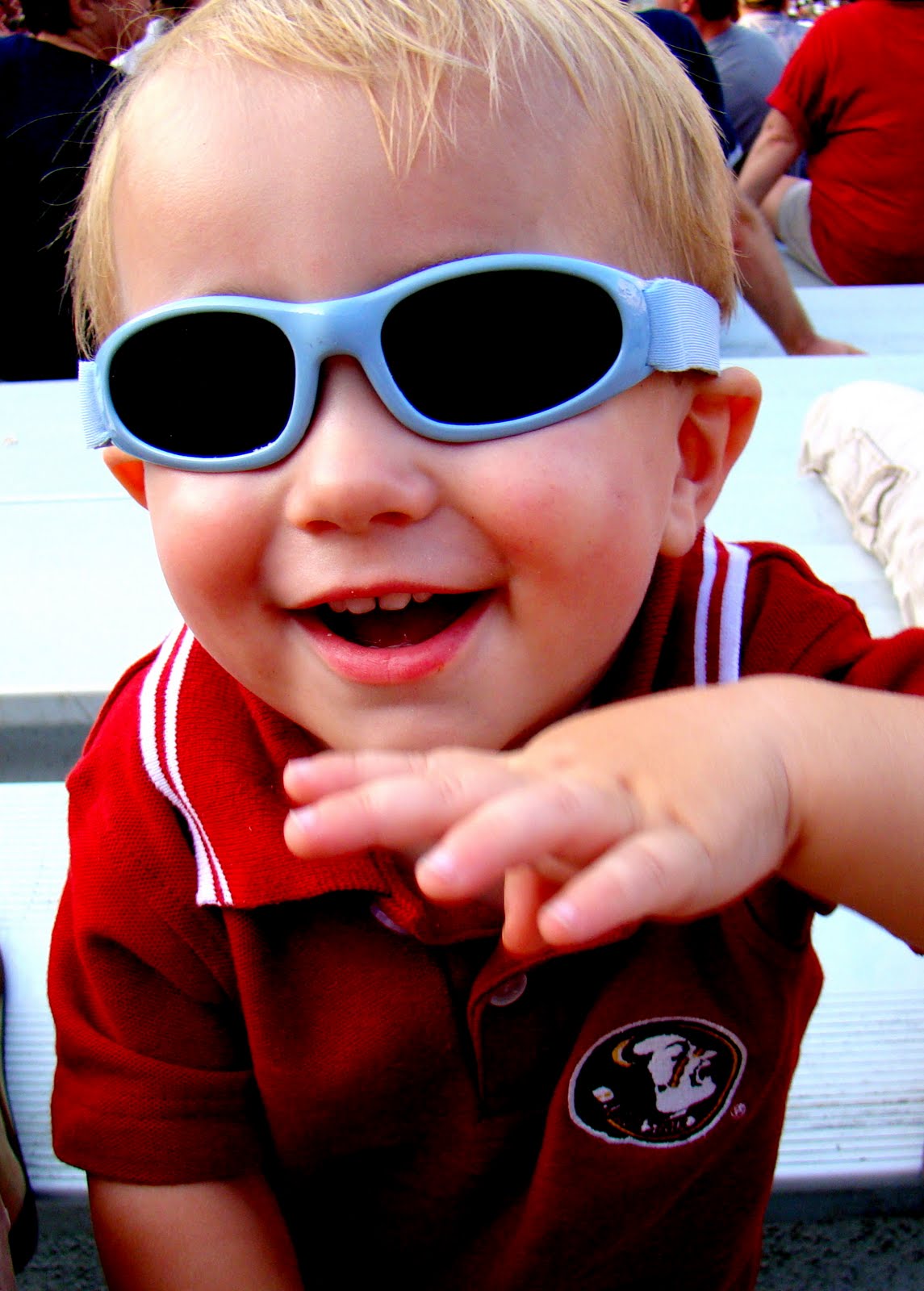 We left the game a little early because it was obvious we had the win (final score was 34-10). On our way out we stopped by the bookstore and picked up some fan gear. The jersey I wore to the game was from my freshman year in college and I wanted a new shirt to wear to the next game, we wanted to get Kye a little FSU football, and we bought a football to take with us on the Aflac cruise in Oct b/c Bobby Bowden will be on the ship and we hope he’ll sign it for us!

had to get another pic outside the stadium 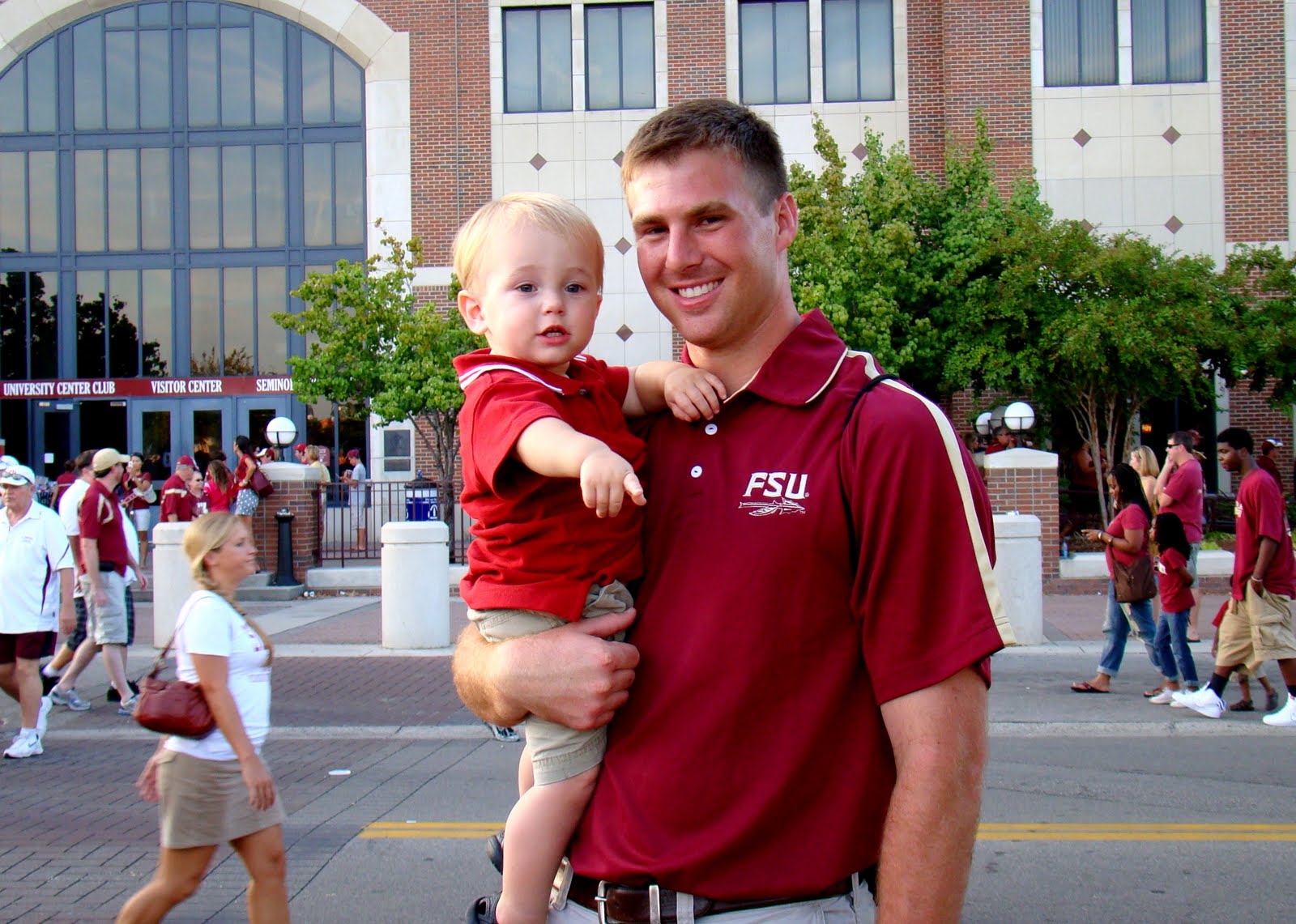 yay for a SEMINOLE WIN! 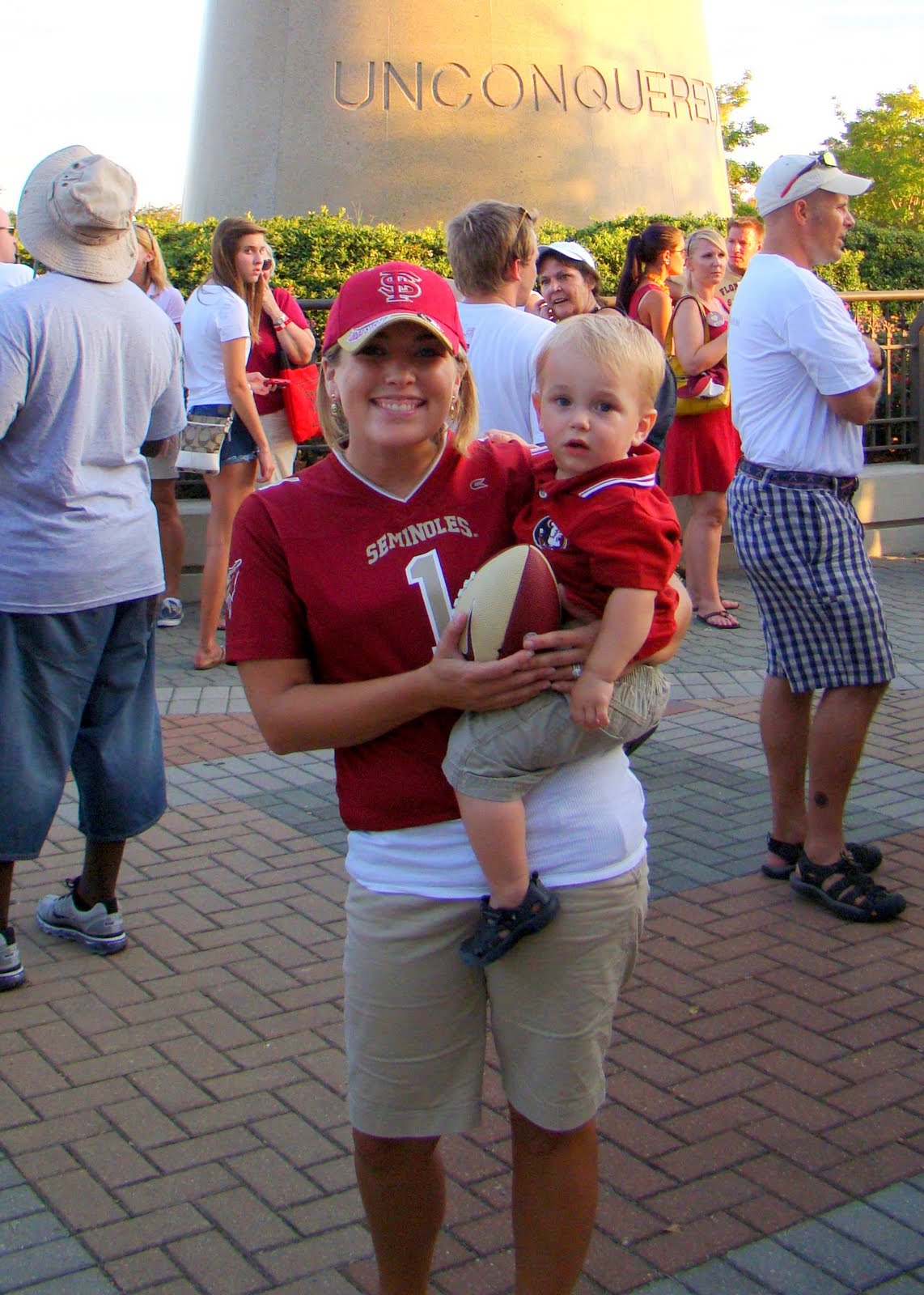 Do you ever have those days that you just know will stick with you forever? For me, our first family FSU game was one of those times. I just couldn’t stop saying how much FUN I had. Sure, I spent most of the game watching Kye, but I didn’t mind one bit. Kye had a great time and behaved so, so well. TONS of people complimented him on how cute he was and how great he did during the game. I was so proud! I know Zach and I get to travel A LOT and I cherish the memories we make on those trips, but Kye doesn’t get to participate in a lot of those adventures with us and I’m thankful that he got to partake in this one. They haven’t announced what time the Boston College game will be (our next one we have tickets for) but I hope it’s at 3:30 again so we can all go together! We keep practicing Kye’s “go noles!” to keep him ready! 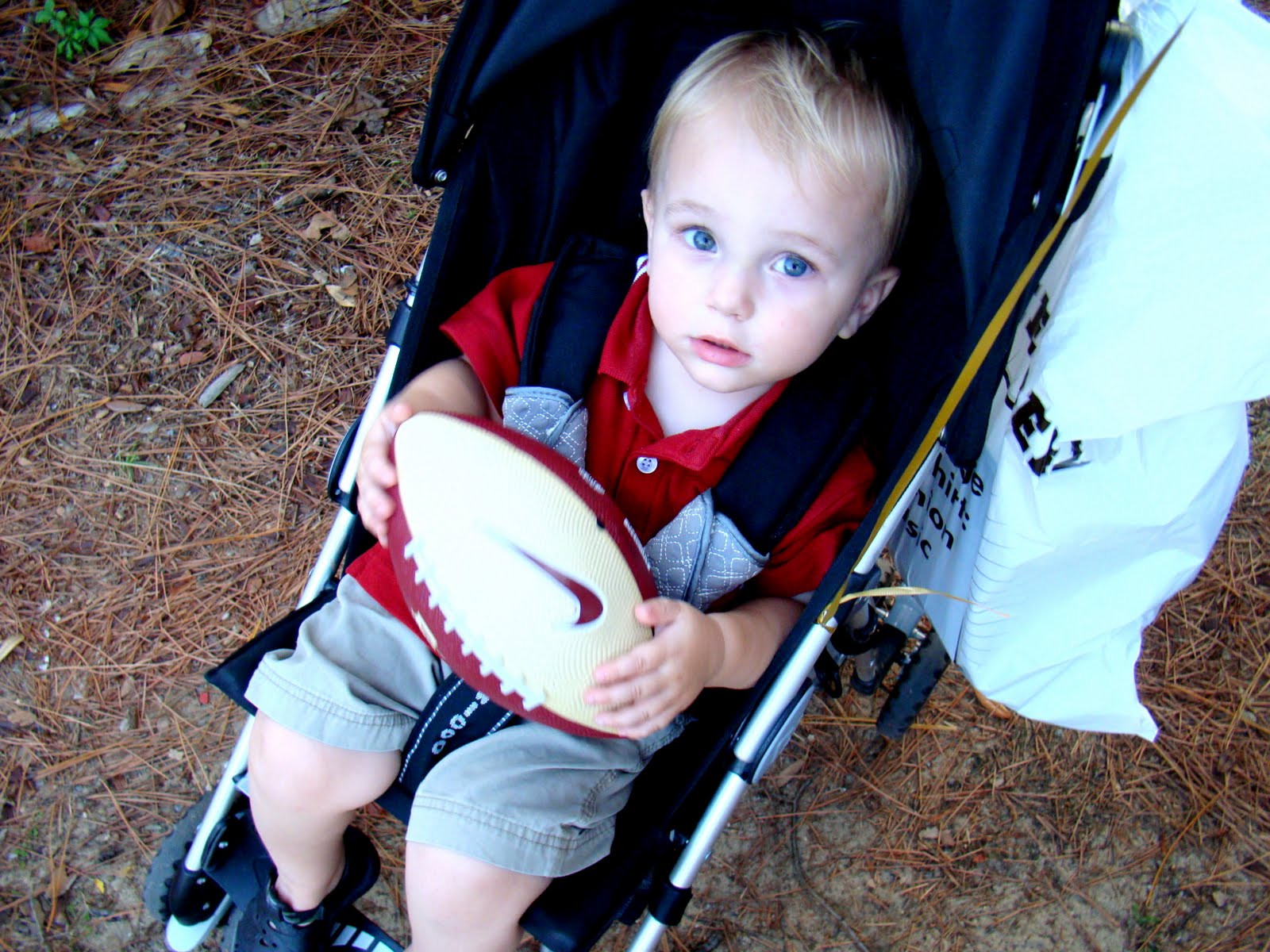