This past month we’ve been slowly introducing Kye to some finger foods. Babywise II talks about using finger foods during family dinner time when it doesn’t line up with the baby’s eating time. This has been helpful for us! The babywise blog also mentions giving the baby finger foods after their meal so it’s still part of that meal and not a snack. I’m not a big fan of snacking, as I’m such a schedule person, so I typically try to do the finger foods after he nurses and eats solids. We don’t do finger foods everyday but when he does have them he enjoys them!

Here’s his first ever finger food (back on Sept 14th): Gerber Wagon Wheels 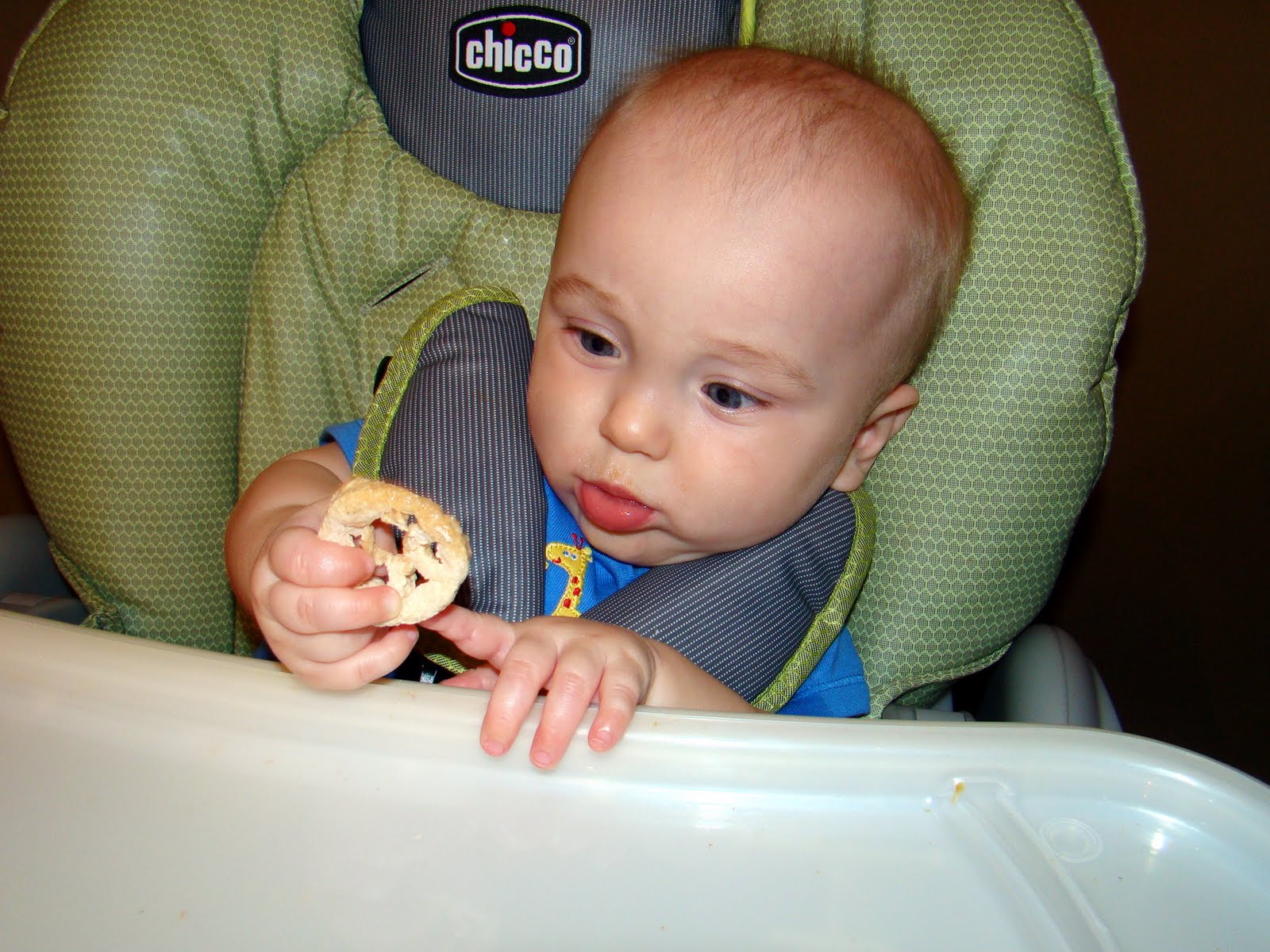 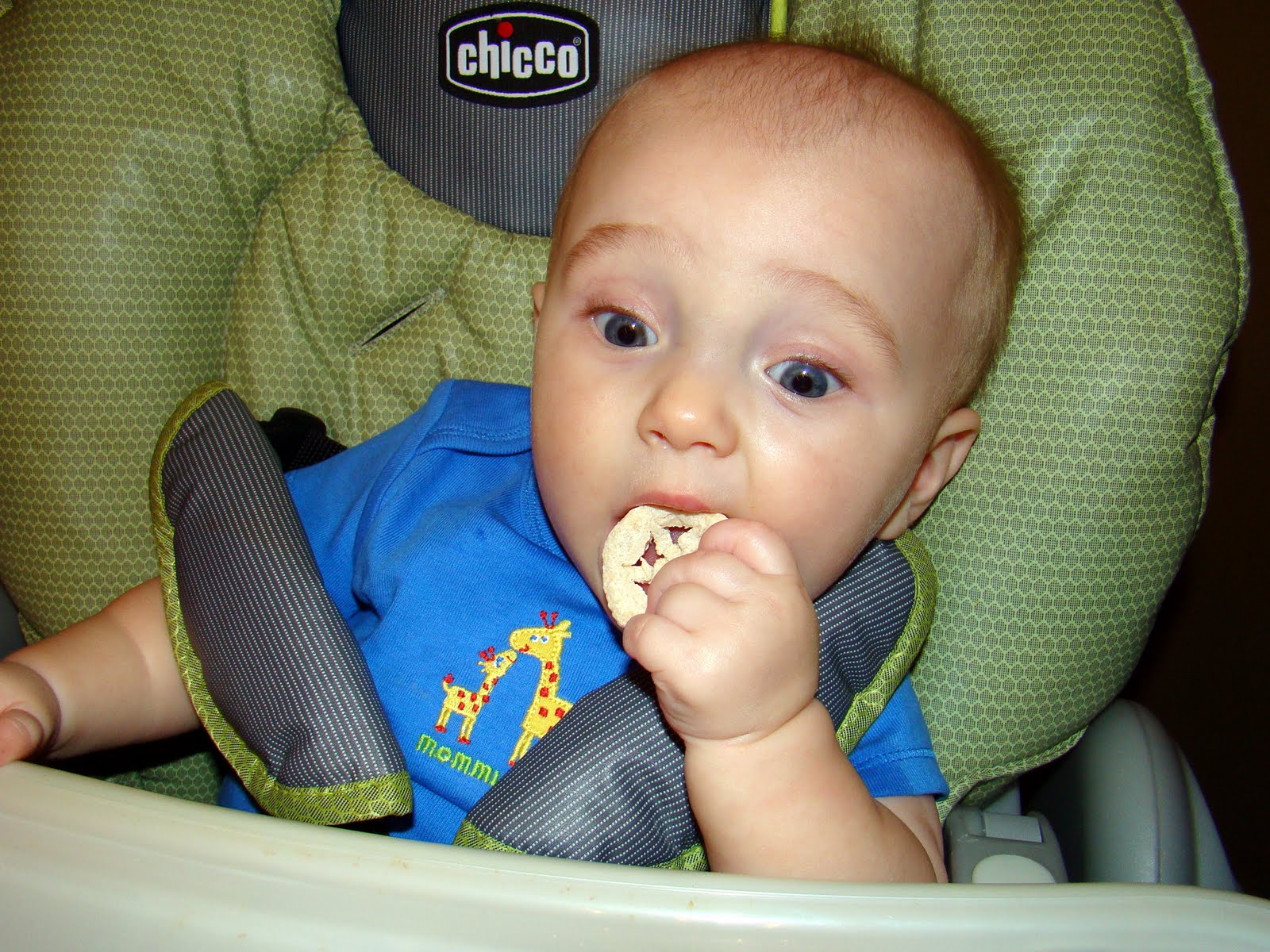 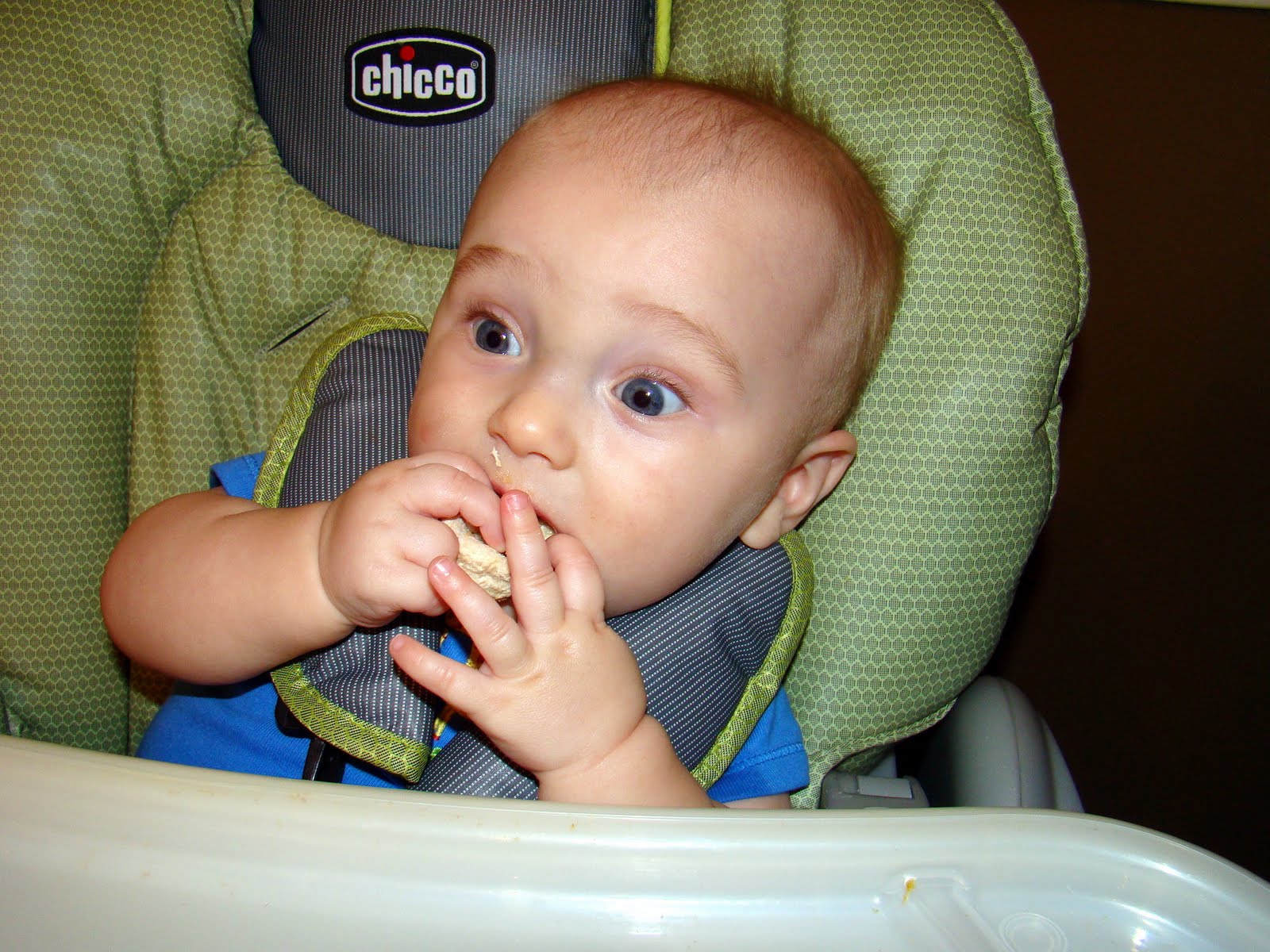 He wasn’t too sure about the flavor, it was a little strong for him! 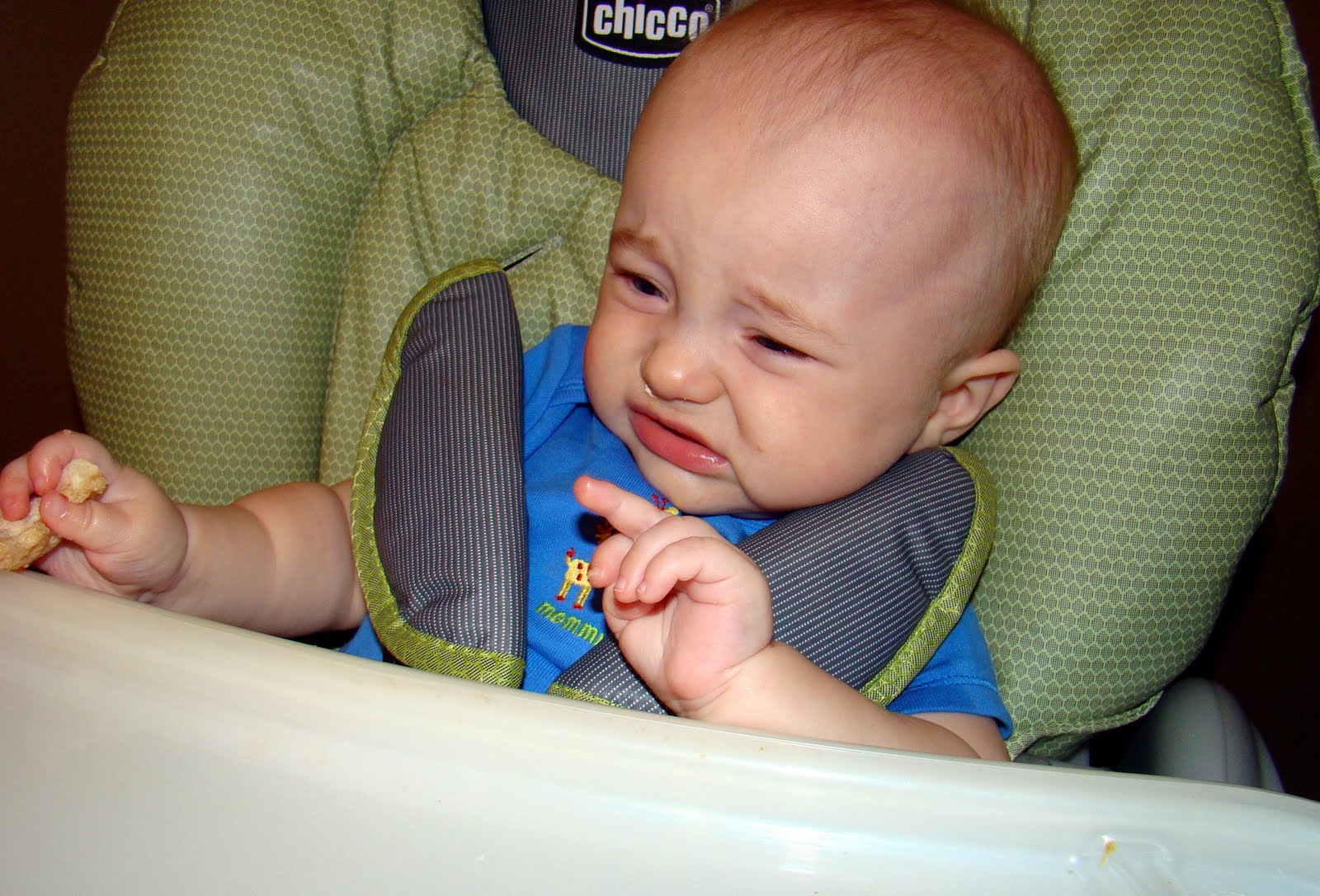 I wanted to let Mom see him eat the finger foods when we went to Melbourne but I forgot to take some to the restaurant with us so they were nice enough to give us a plain roll for him to gum on. Of course, now that I’m learning more, babies aren’t supposed to have white bread because it doesn’t crumble and instead turns doughy when wet (which we quickly discovered on our own!). Oh well I won’t do it again for a long time I’m sure and one time didn’t kill him! 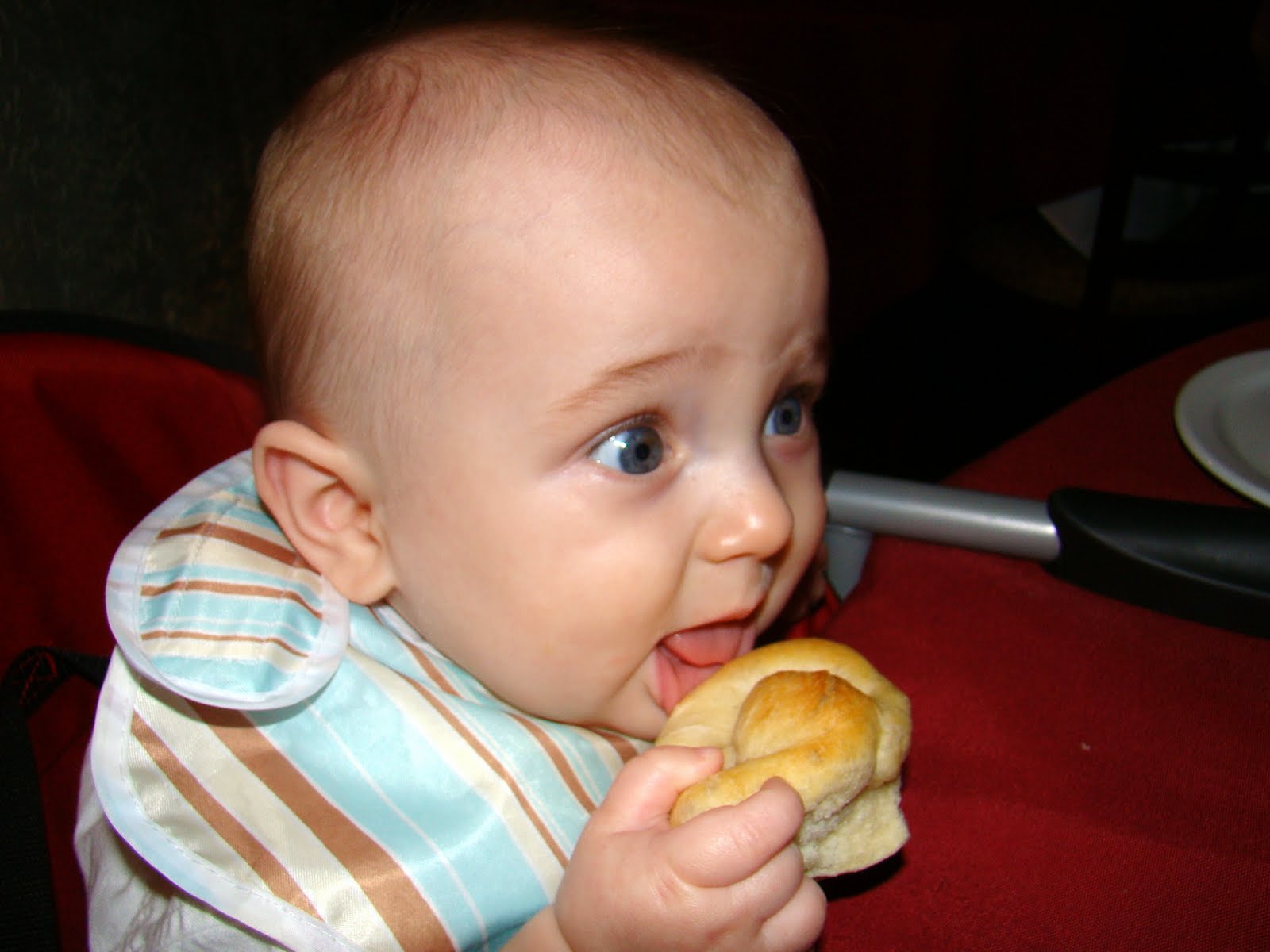 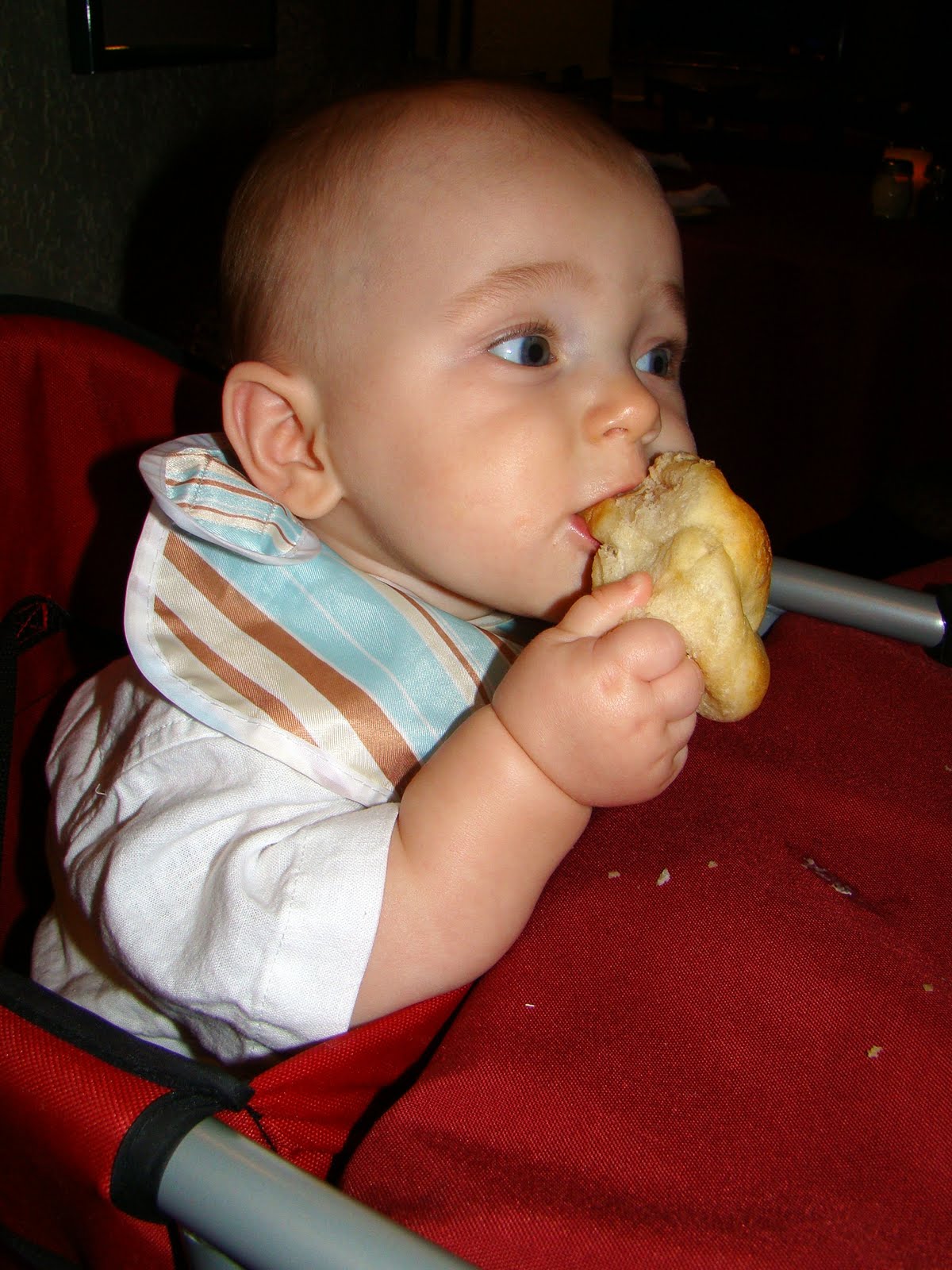 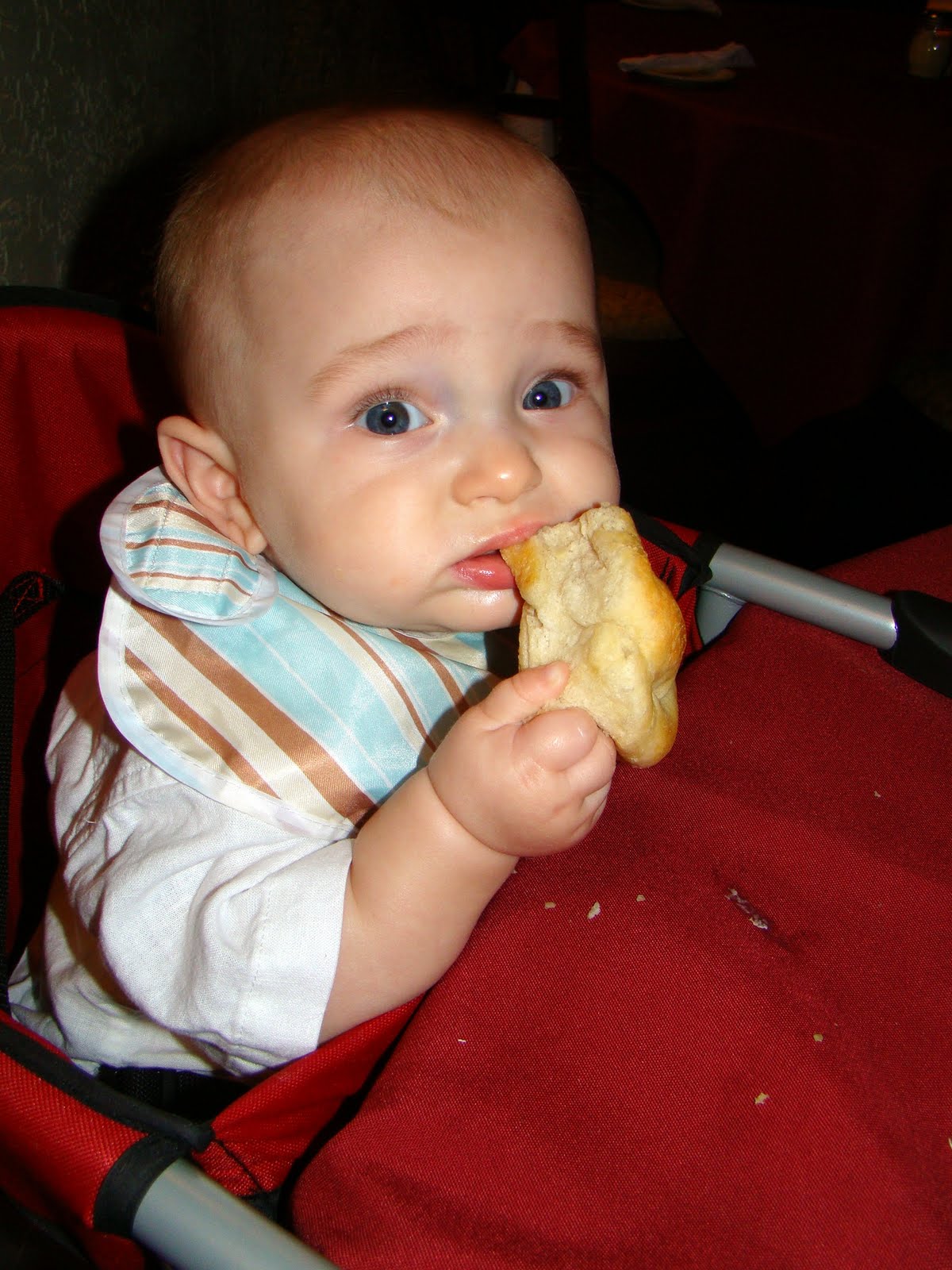 While in Mexico (post to come I promise!) I was excited for him to get to eat FRESH fruit! We only grocery shop once a month (I pre-plan out all my meals and buy a months worth of groceries at one time, it saves money and many trips to the store!) so we don’t really have a lot of fresh stuff all the time. We ate breakfast after his feeding so it worked out well to let him try something. Here is his first fresh fruit, melon! He really liked it! I also took a video for Gramma so she could see it too 🙂 We also tried banana in it but he didn’t enjoy that as much as the melon. 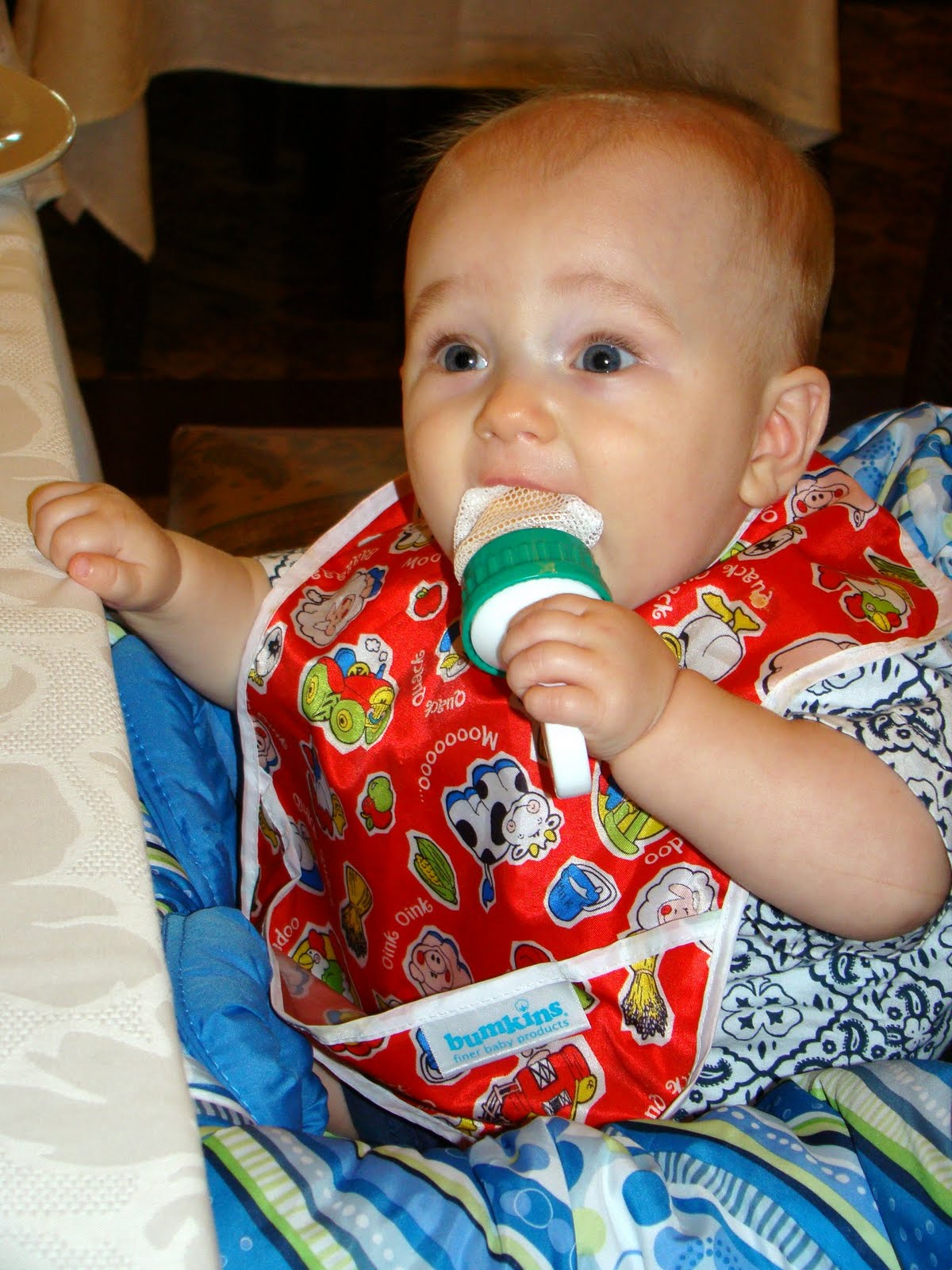 doesn’t his hair look so blonde? 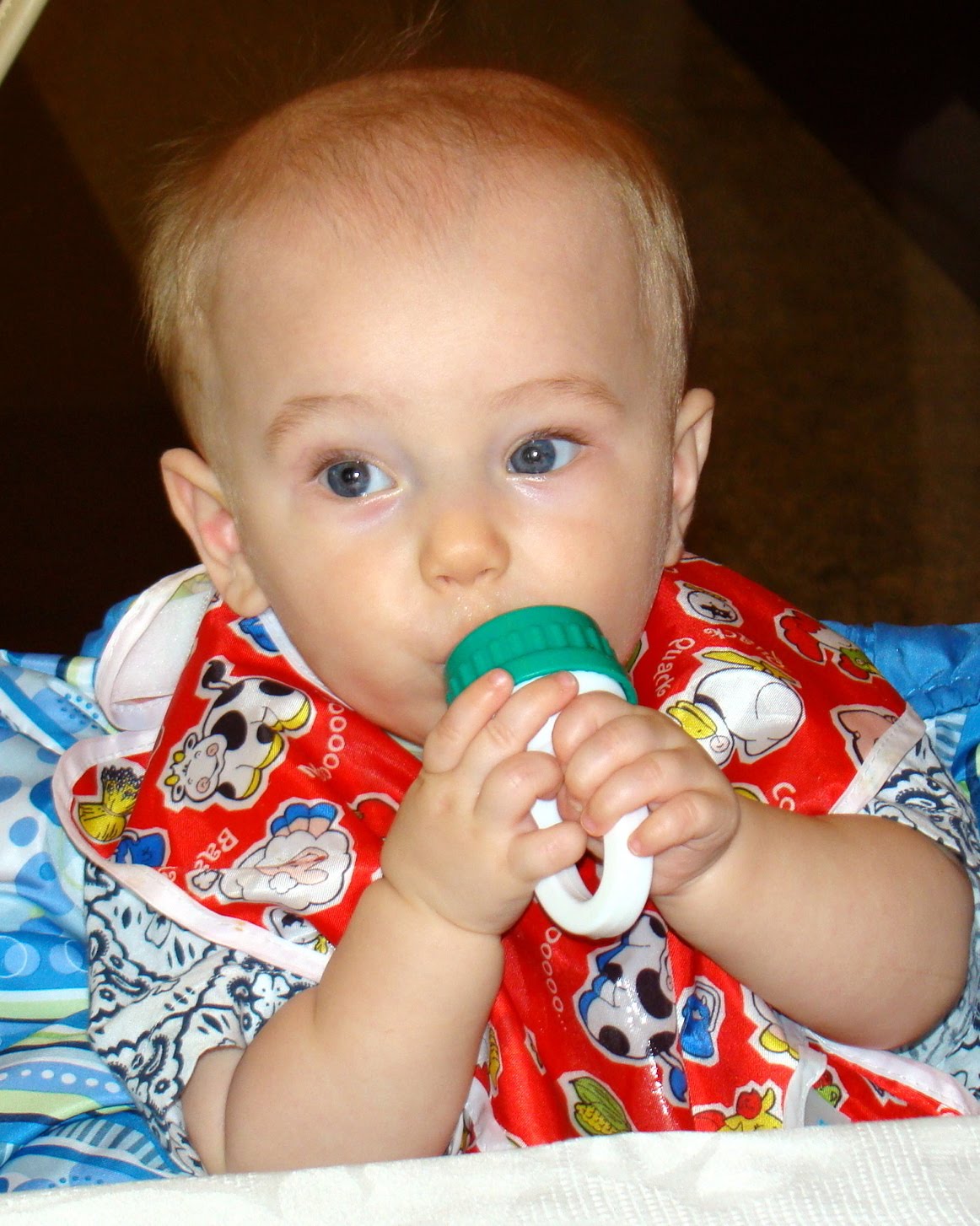 Now that Kye has dropped his third nap (my new catch phrase…post to come!), we’re trying to eat dinner around 5ish so we can eat it as a family since he’s going to bed earlier. When we eat as a family we plan to give Kye finger foods. It’s far enough away from his next feeding to not affect it too badly, it helps him enjoy dinner, and it gives him the practice of eating on his own! I gave him some banana in the feeder thing but again he didn’t like it much. So we busted out the Cheerios! When I bought them I almost bought the Honey Nut kind but did you know babies aren’t supposed to have anything with honey until they are over 1? Yeah, I didn’t either but I’m glad I read that online before grocery shopping! He LOVED the Cheerios and did really well getting them in his mouth. The funniest part was that he would grab at it and miss on his tray and then THINK he had something in his hand haha. So cute. He also has started to chew which is funny! 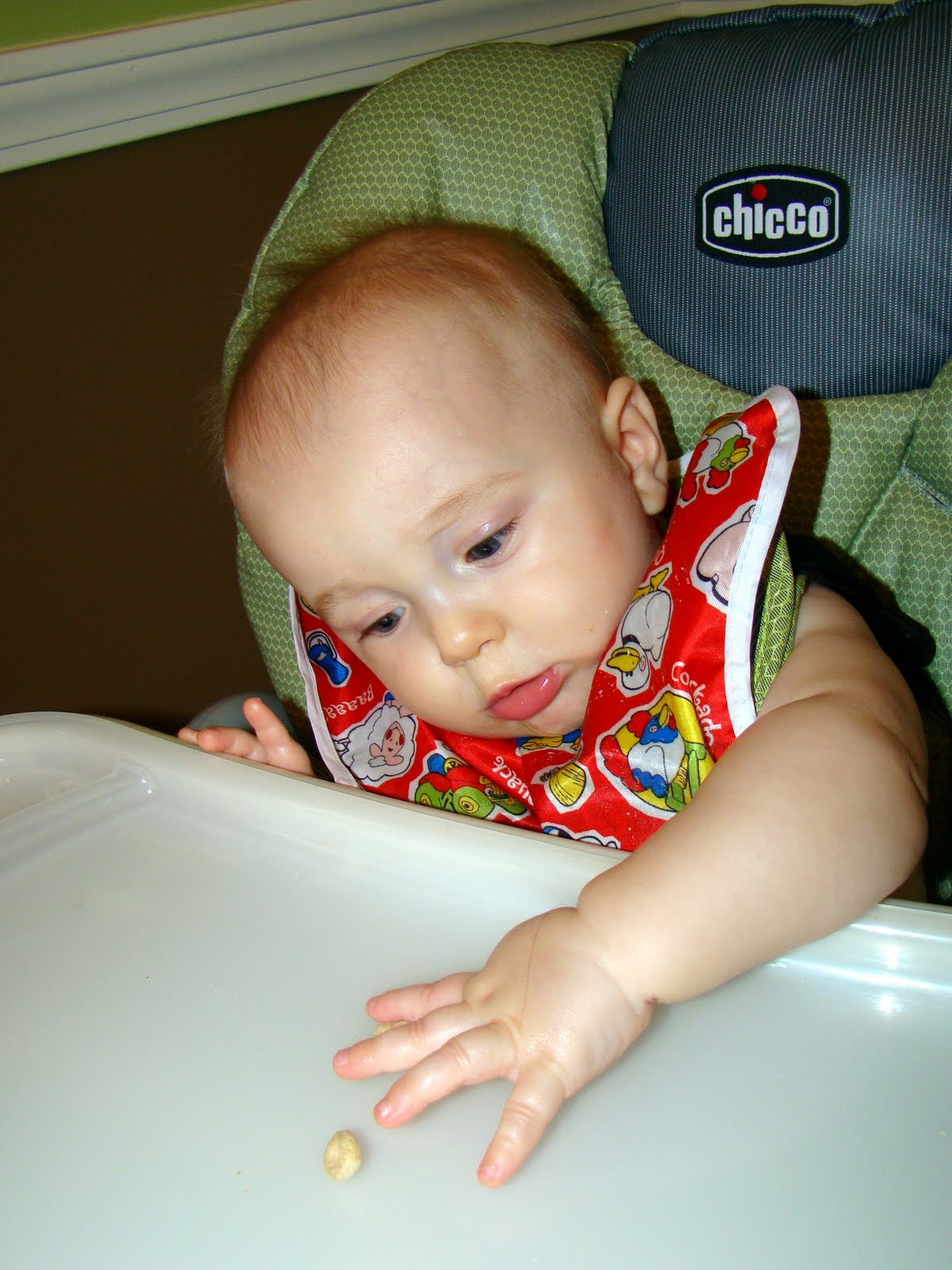 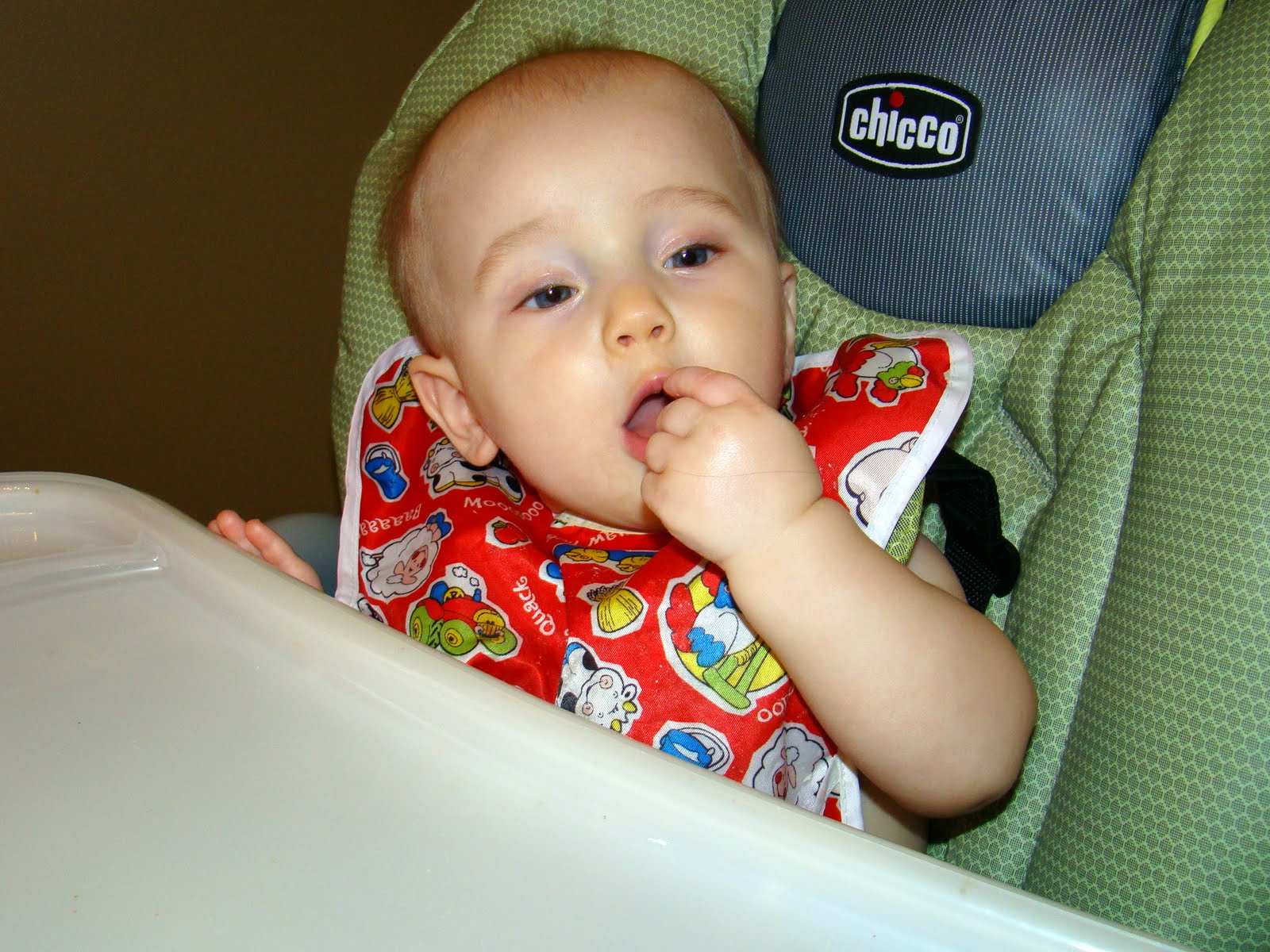 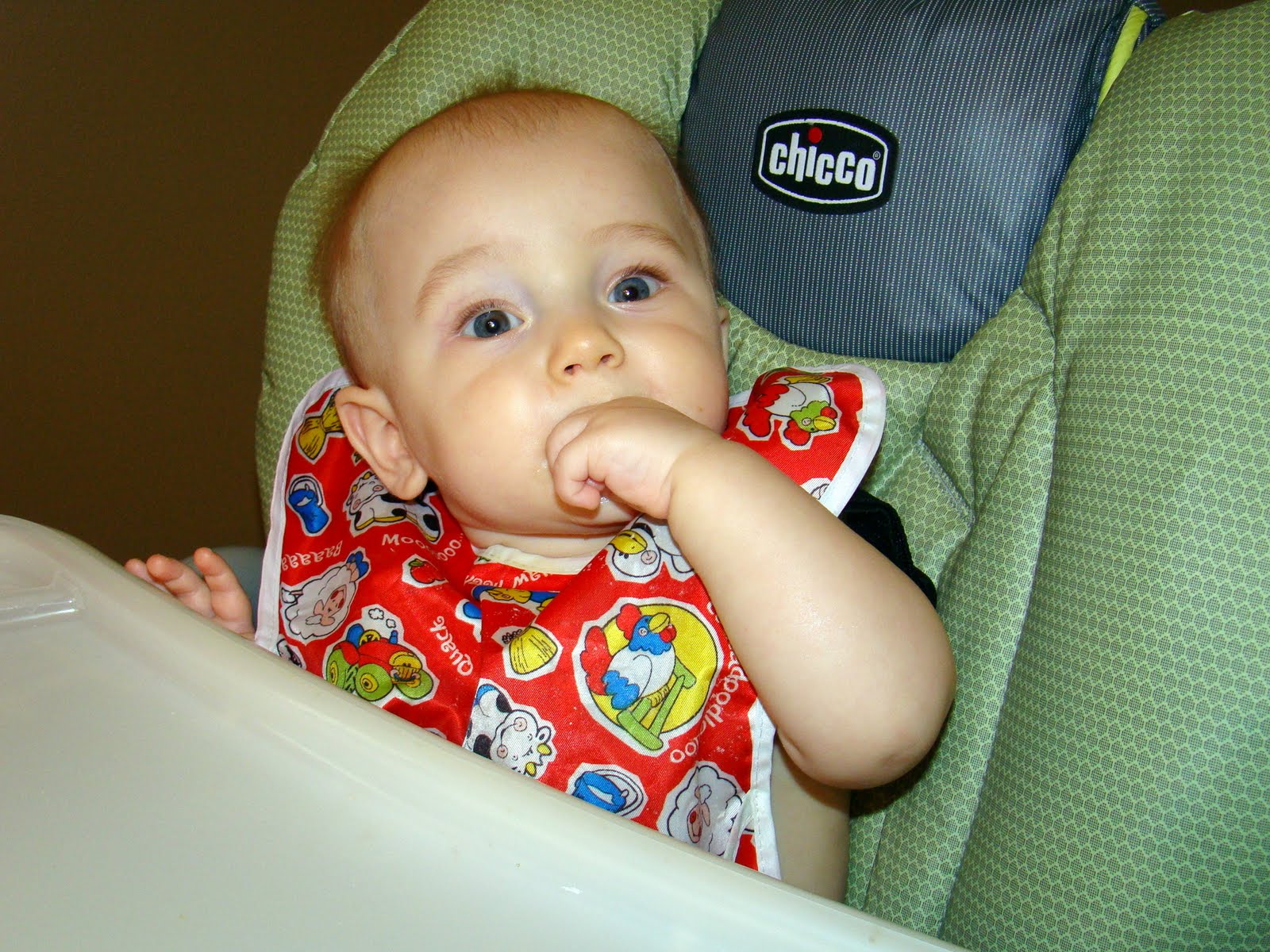 he gets frustrated when they are all gone! 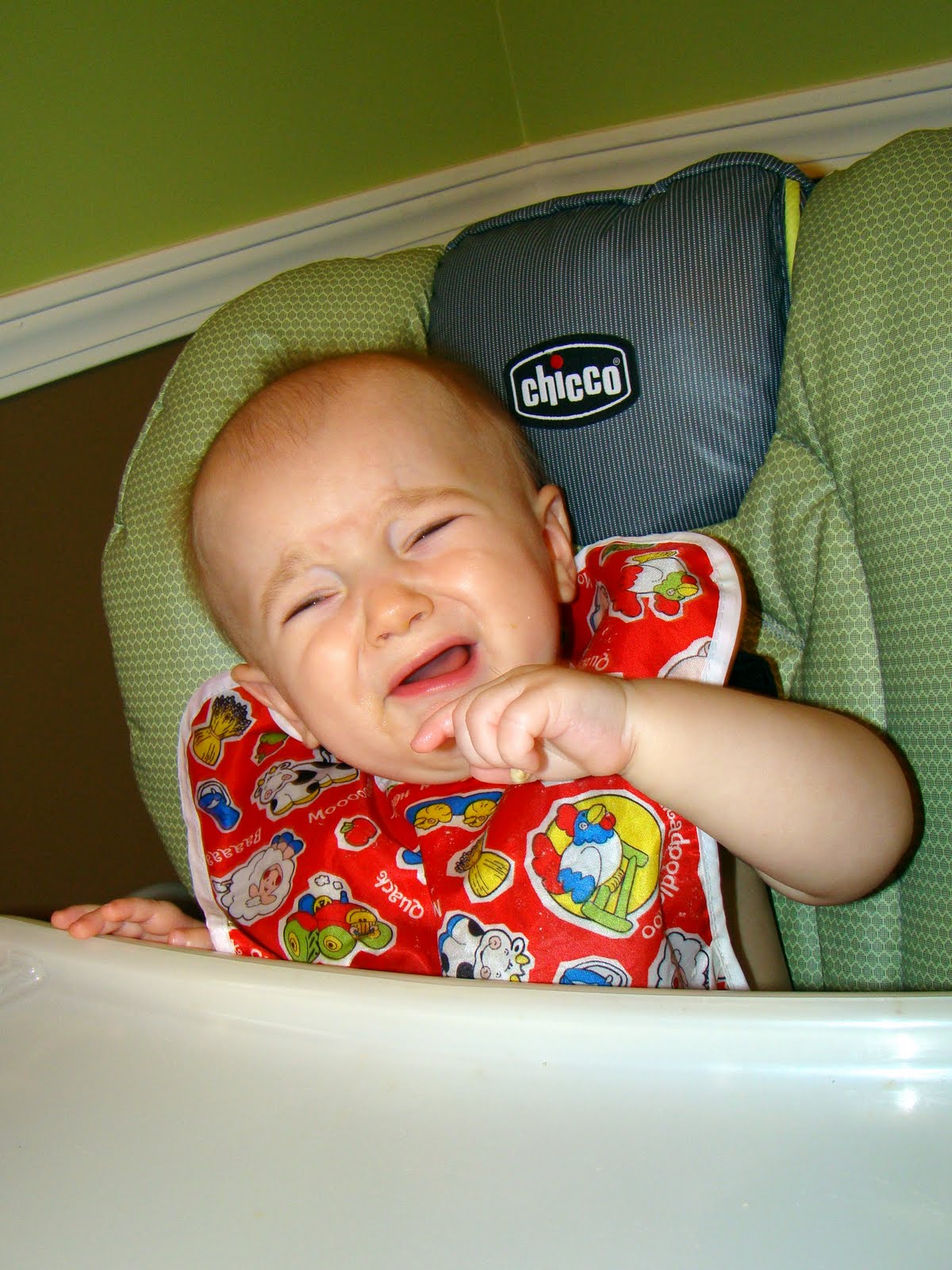 I really kind of agree with the Babywise Blog about sticking to jarred food for the most part because I know that it’s okay for him to eat! There are so so so many things to be careful about with allergies and choking and everything and I’m kinda clueless with all that stuff. Does anyone recommend a good book about nutrition? I don’t know the FIRST thing about that!!! I’ve bought him some other finger foods to try, lots of Gerber puffs, yogurt melts, some whole wheat bagels to freeze, and some Dole fruit cups (plan to wash them off well to get rid of the syrup). I love watching him enjoy feeding himself and know it’s only one of the many things he’ll be doing on his own in the future!