Who came up with the name Chick-fil-A anyways? It’s SUPER annoying to spell…Anyway we’ve been trying to get together with Seth and Crissy for awhile now but between our sicknesses, rashes, and their sicknesses it just hasn’t happened. Finally we decided last Tuesday to go to Chick-fil-A‘s family night where kids eat free! They have them here in town at both Chick-fil-As every Tuesday night!!! We’ve never been before and were kinda nervous about what it would be like. I envisioned millions of kids running around breaking rules and pushing the younger kids down. Thankfully, it wasn’t like that AT ALL. It was AWESOME!!!

The Megow Family (They have 4 mouths to feed and only spent $6!) 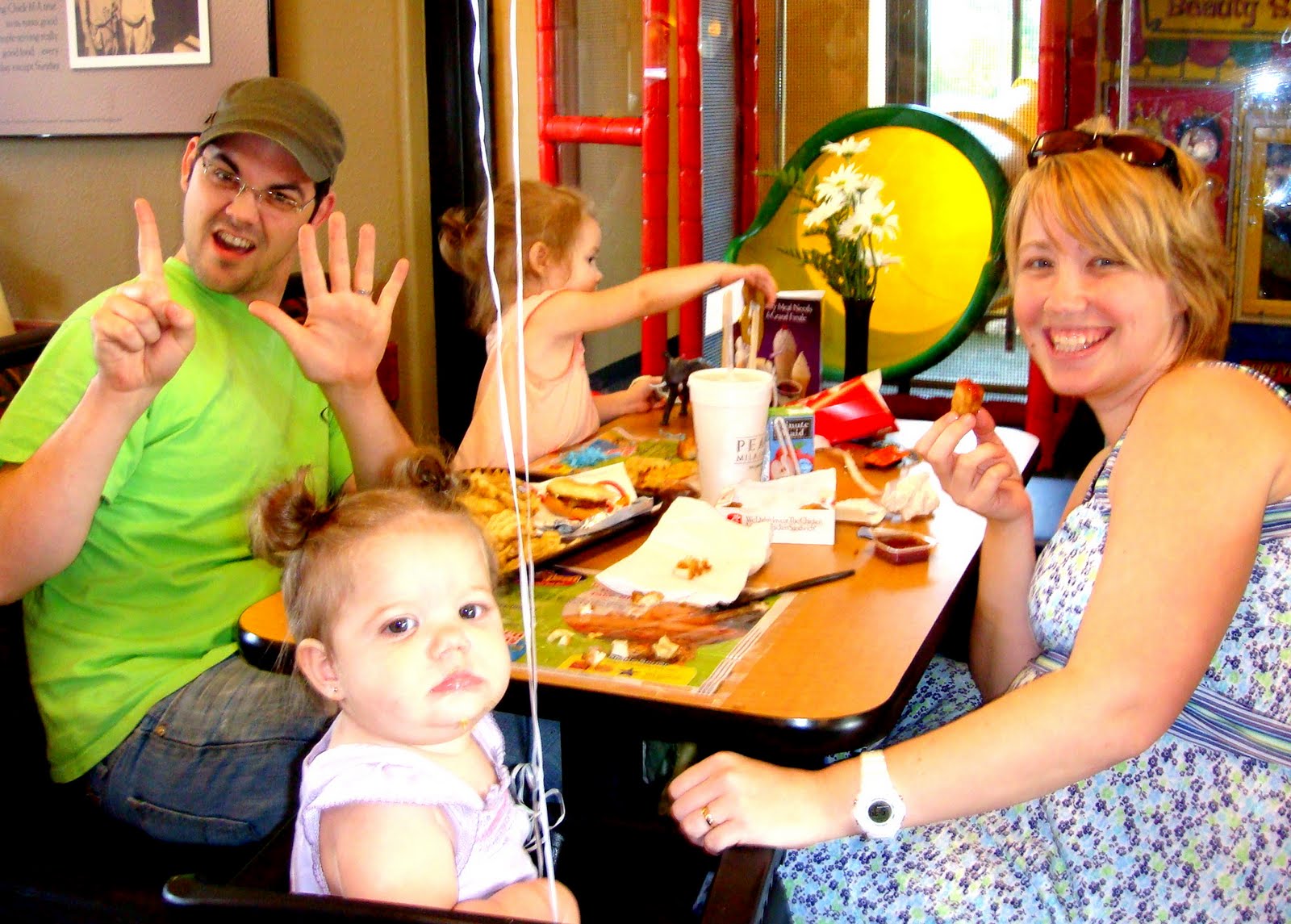 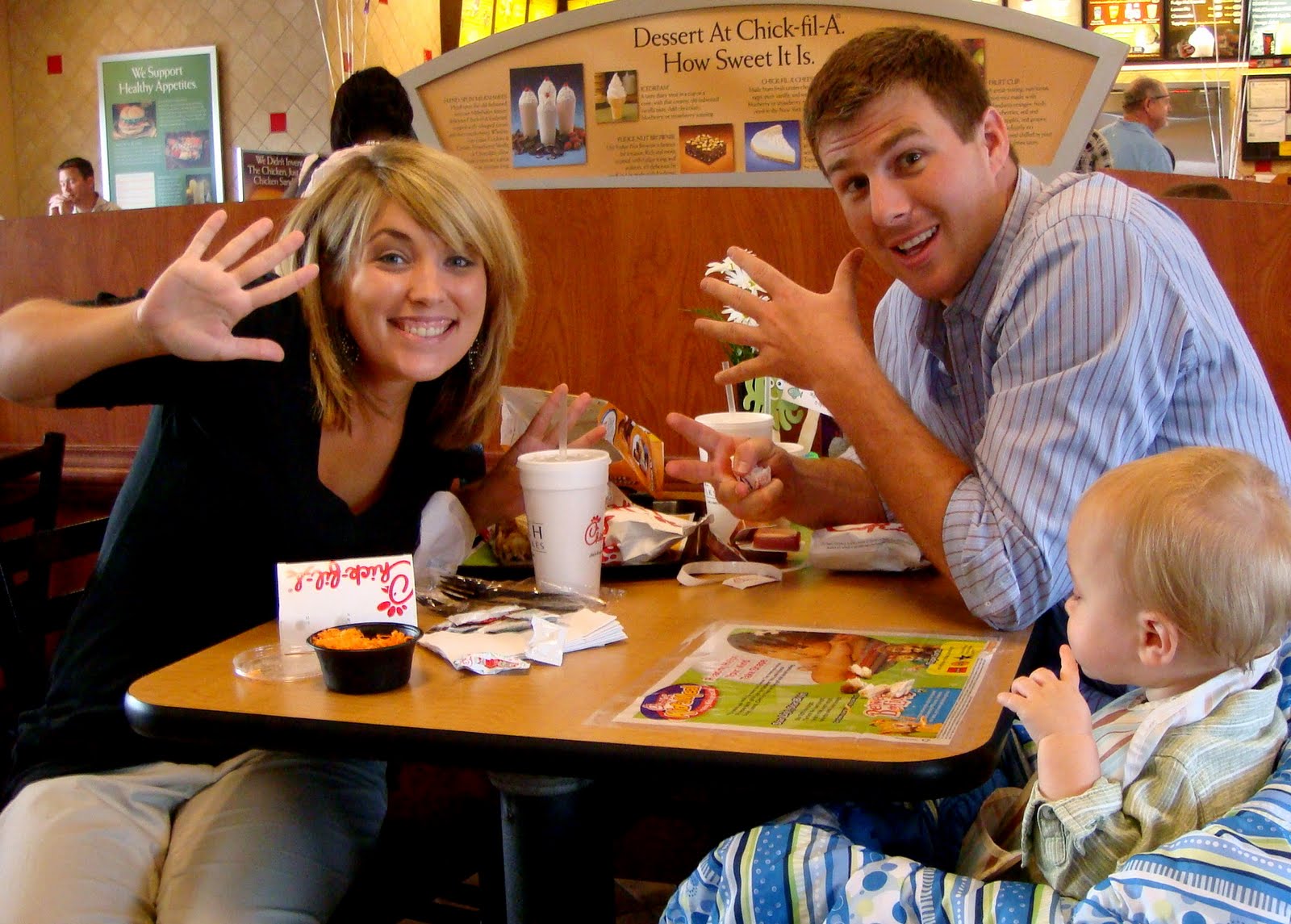 First of all the new Chick-fil-A in town (North Valdosta if you’re local) has a special “toddler only” section just for the younger kids so they can play and not worry about older kids knocking them over. This was great for all three of our little ones. They also have amazing deals! Zach and I got: a chick-fil-a sandwich meal (comes with medium drink and fries), kids meal, carrot and raisin salad, ice cream and another chick-fil-a sandwich for only $8. Plus they gave us a coupon survey thing good for another free sandwich next time we go! The downside is that the only free kids meal is the 4 piece chicken nugget and I couldn’t get it grilled but a little fried food every now and then won’t kill him. Plus Kye LOVES the carrot and raisin salad so I ate his fries as my side 🙂 And did you know you can trade in the kids meal toy for a free ice cream? Seth and Crissy know ALL the deals…such handy friends to have when we’re trying to save every penny we can! 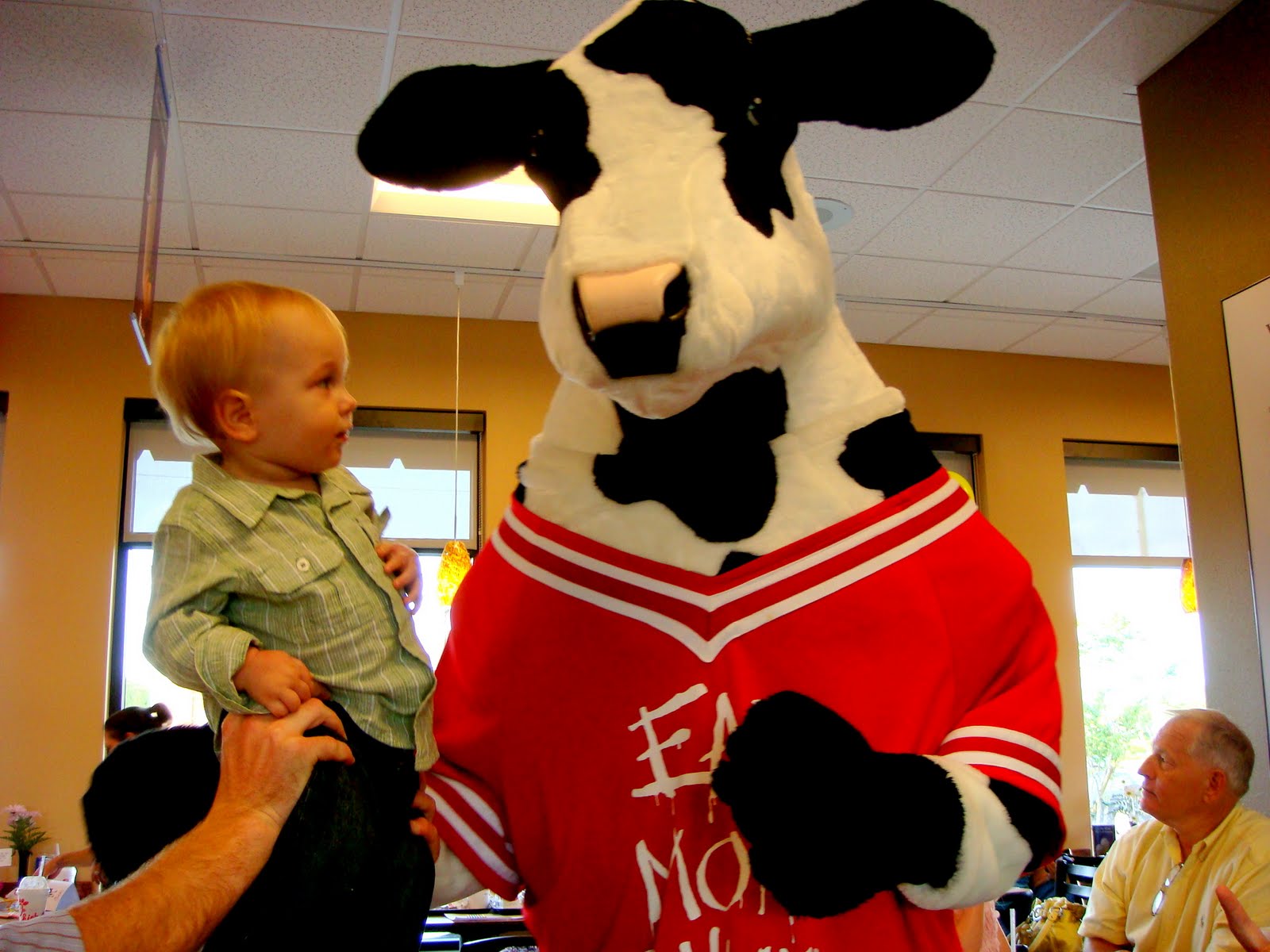 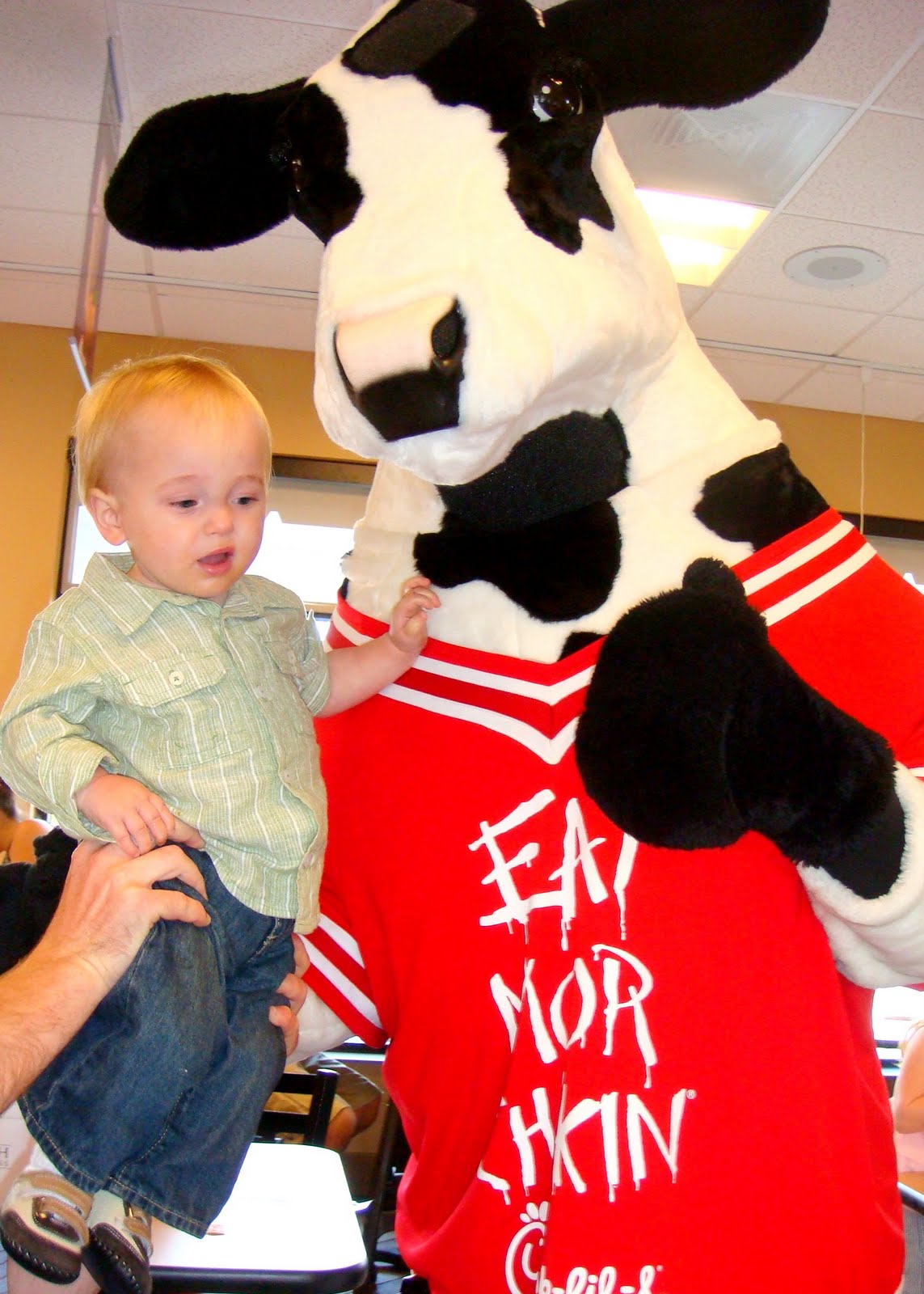 All the kids had a fun time and it was SO great getting to catch up with Seth and Crissy. Good friends are hard to come by and they’re great ones. We all took turns being in the play area and being at the tables and it’s nice that I had great conversation with Crissy but that I also did with Seth! How rare is it to like BOTH people in a couple equally?!? Hopefully we can make Tuesday nights at Chick-Fil-A a semi-regular thing. We try to eat at Zach’s parents on Tuesday nights too so maybe we’ll alternate weeks or something. Our entire little family enjoyed the food, the company and the fun so I know we’ll make sure to go again soon! 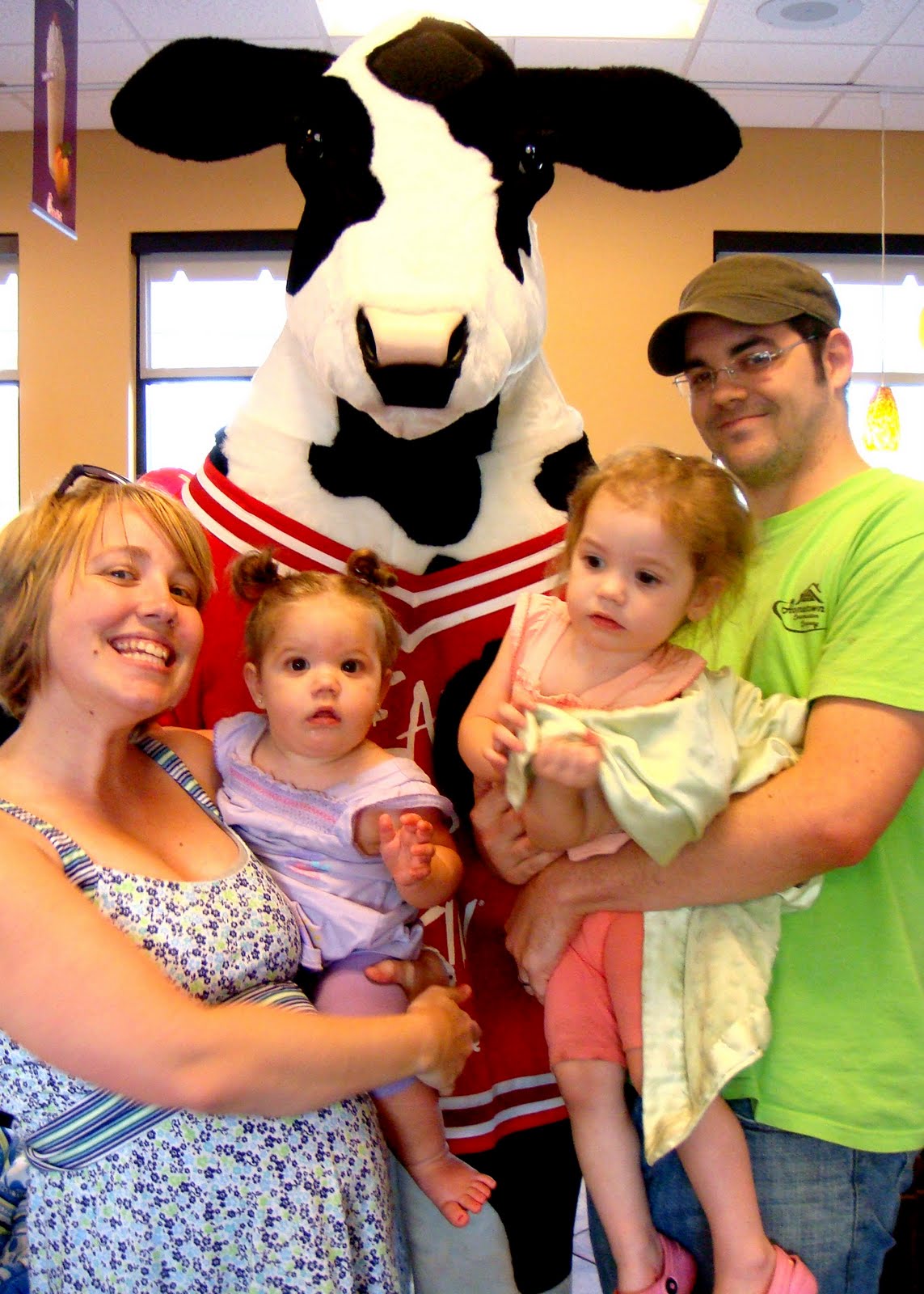