Since getting DVR a couple years ago Zach and I record a good bit of TV. We watch most of the “good” shows out there. From Grey’s Anatomy, to Survivor and Real World. My personal favorite though? Big Brother!!! I had heard about it but thought it sounded so stupid…until my mom got really into it and I decided to give it a try. OMG it’s the BEST show ever seriously!!!

This is our third season watching and it’s my favorite. Recently we got a free HD upgrade and part of the deal was 3 months free of HBO and Showtime. Well when Big Brother started they always advertise watching After Dark on Showtime to follow the houseguests live and this year I actually had Showtime! I started taping the After Dark (it’s on from midnight to 3 am every single night) and became ADDICTED. All summer I haven’t watched any other show but Big Brother or Big Brother After Dark!!!

Of course anytime you watch a show you pick favorites and since I watch nothing BUT this show I really feel like I know them each personally (Lame I know haha). I have LOVED watching the relationship between Jeff and Jordan. Right when the show started I thought Jordan was so pretty! She reminds me of my friend Dainelle Rainey because she is naturally beautiful and looks good ALL THE TIME (so annoying!). Then I saw Jeff and liked him too. He’s now replaced Johnny Knoxville as my personal pic for hottest celebrity! Then they started up a little romance and I couldn’t STOP watching!!! 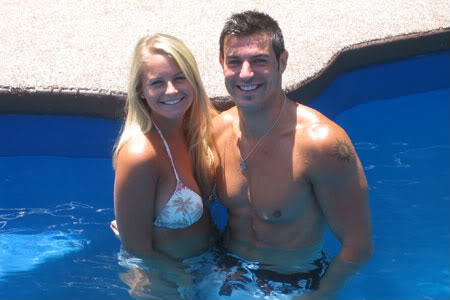 Everytime I nurse Kye and every night I’d spend some quality time with Jeff and Jordan! I would fast forward through most of the After Dark show (I don’t have the time for 3 hours A DAY) but I’d always watch EVERY second that Jeff and Jordan were on the screen. They have the cutest relationship and I really, really, really hope they end up together after the show is over.

My whole obsession has really annoyed Zach. One night he came to bed and said,”Emily I had to tell you that you really hurt my feelings today.” Of course I felt bad right away and asked him what I’d done and he said, “today you accidently called me Jeff.” He was just kidding but I have become so involved with them that I actually believed that I’d done that! I have NEVER been this into a tv show and especially not this obsessed with a couple! I not only watch the show and the After Dark show, but I follow it online too! You can subscribe to 24/7 live feeds from the house and while I wouldn’t go that far I do read on a website almost daily that covers the highlights from each day. I’m not kidding. Am I lame or whhhhat?

With Nana passing away though the show really has been such a nice distraction for both Mom (she got 3 months free of Showtime too!) and I. And Jeff and Jordan are the best distraction of all! We’ll both tune in for a little pick-me-up and it’s been good to have something to look forward to and discuss when we talk!

Well Thursday night was a hard night for me. Jeff got sent to the jury house 🙁 It was so so so sad to see him and Jordan up on the block against each other! Jeff really deserved to win and it’s so sad that he can’t now. I will be voting for him for the fan favorite though and I’m sure he’ll win that ($25,000). I’ve really enjoyed my Jeff and Jordan days and I’m so sad to see them gone. I doubt I’ll ever be this involved in a show or it’s cast again! I’m just praying that someone somewhere gives them a spin-off show or something 🙂