Once my blog’s facebook page reaches 100 likes I plan to do a fun giveaway that will only be available to those who have “liked” the page! Only 2 “likes” away so if you haven’t already done so…head on over now!!! https://www.facebook.com/JourneyOfParenthood

Every year Zach and I fill out NCAA brackets for March Madness. Every year we have a little contest to see who will have the best bracket. Every year I have won. Isn’t that funny? Zach is Mr. Espn (legit nickname too…he has actually been on ESPN…) yet I beat him out without ANY knowledge whatsoever about the sport. I just pick based off the states they play for. For me, FSU and Michigan schools always make it pretty far. As does NC State since I like their colors. Haha. Last year the stakes were SUPER high…and since I won I got to go to VEGAS!!!

This year we both agreed to keep the bets low-cost. We went back to our whoever wins gets to do whatever they want for a date night. Much more reasonable 😉

Here Zach is back in MARCH filling out his bracket! 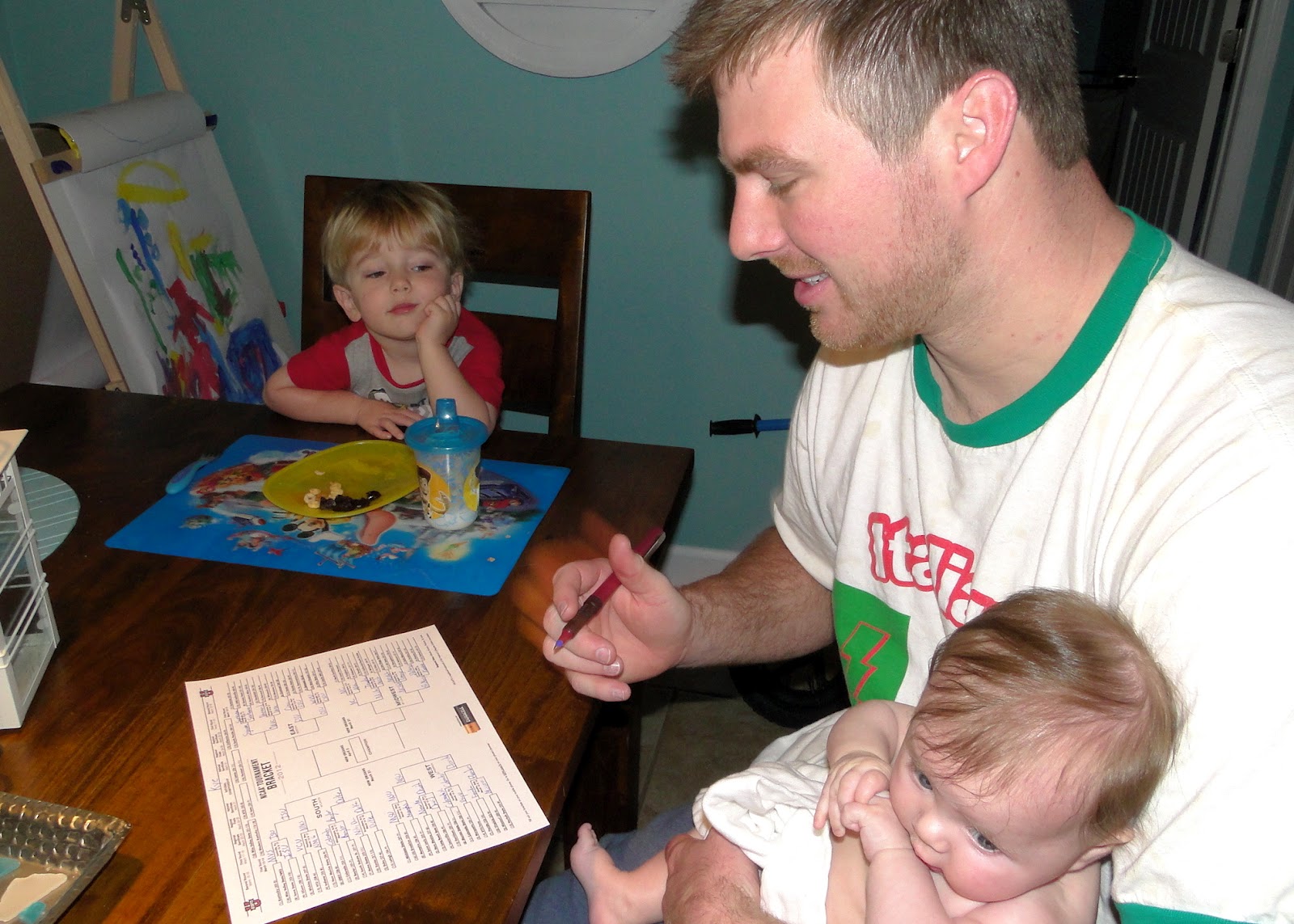 Kye helped him and then filled out his own (he wasn’t in the competition though!) 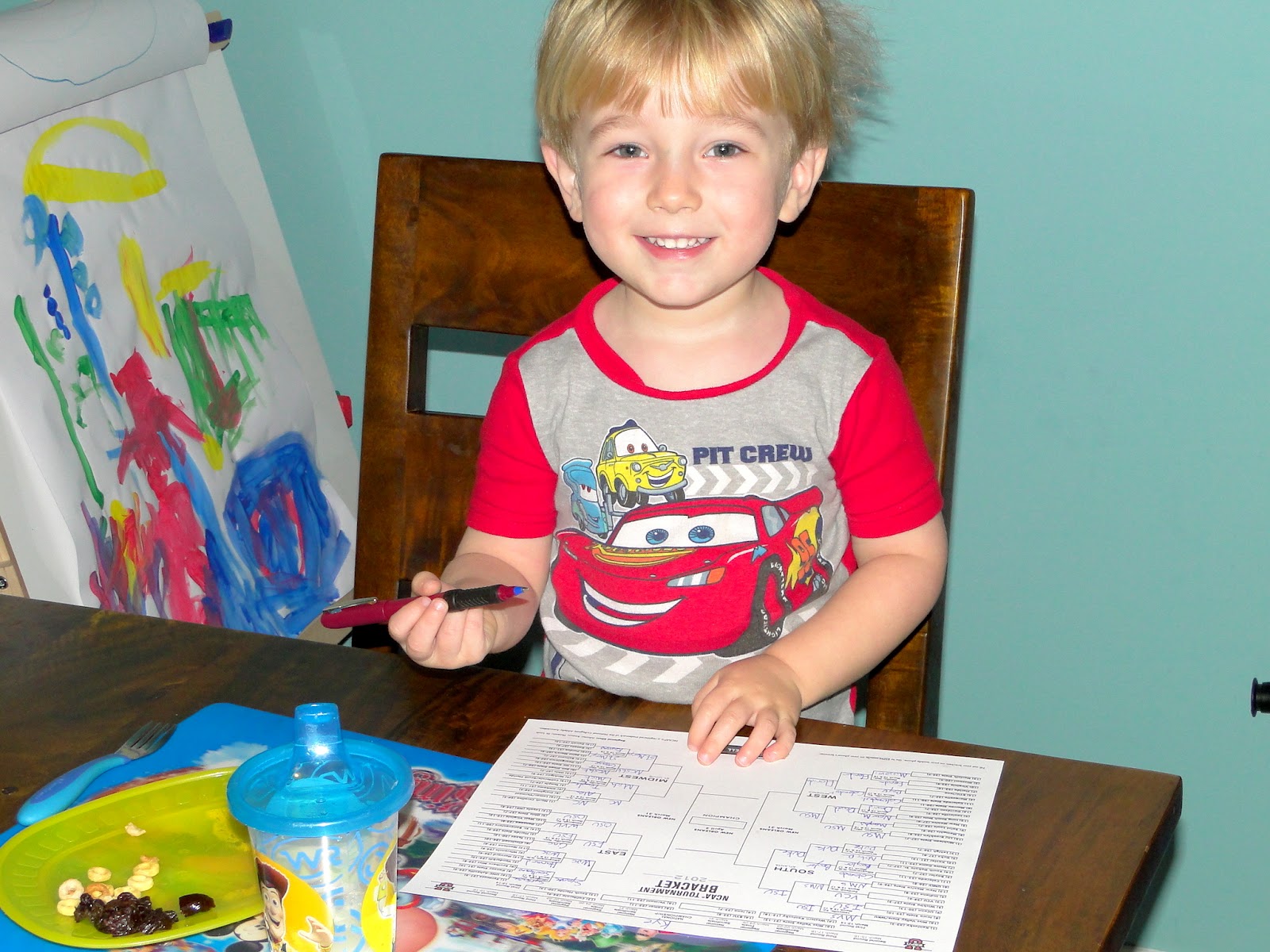 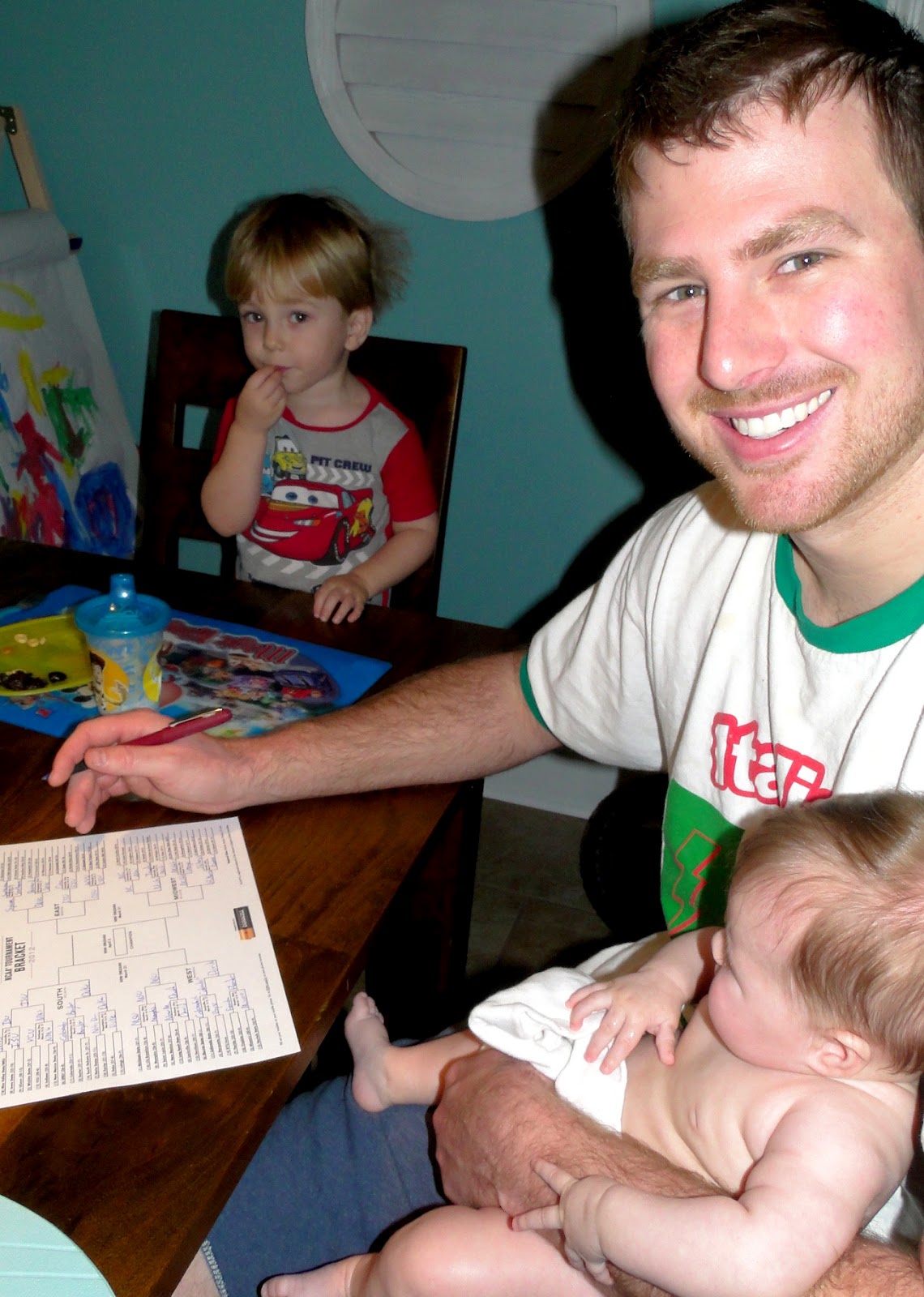 The day after I took Kye to the dentist I took him back to Mrs. Charlotte’s with Brittlynn and they stayed there for two nights. It gave me a chance to get all my dr appointments in and gave Zach and I two nights of quality together time. We hadn’t had a date night since VALENTINE’S DAY!!!! We both value quality time together so much but it’s for real a LOT tougher to go on dates with two kids. We just feel bad asking people to babysit. And we don’t want to spend the cost of hiring a sitter either. So we never go. This happened to work out where I needed to get all those appointments handled anyway so the date nights were a bonus 😉

This year ZACH ended up WINNING for the first time EVER. Ugh. I killed my winning streak 🙁 He originally wanted to go eat at Ryan’s (random…I know…) but they closed down! We decided to split up his date nights into two separate nights. He wanted to do both dinner and a movie and I just hate rushing through dinner to get to a movie on time or going to a movie prior to dinner or going to a mega late movie…don’t you? So we did a quick dinner the first night with the movie then did a longer dinner the second night. It worked out perfect!!! 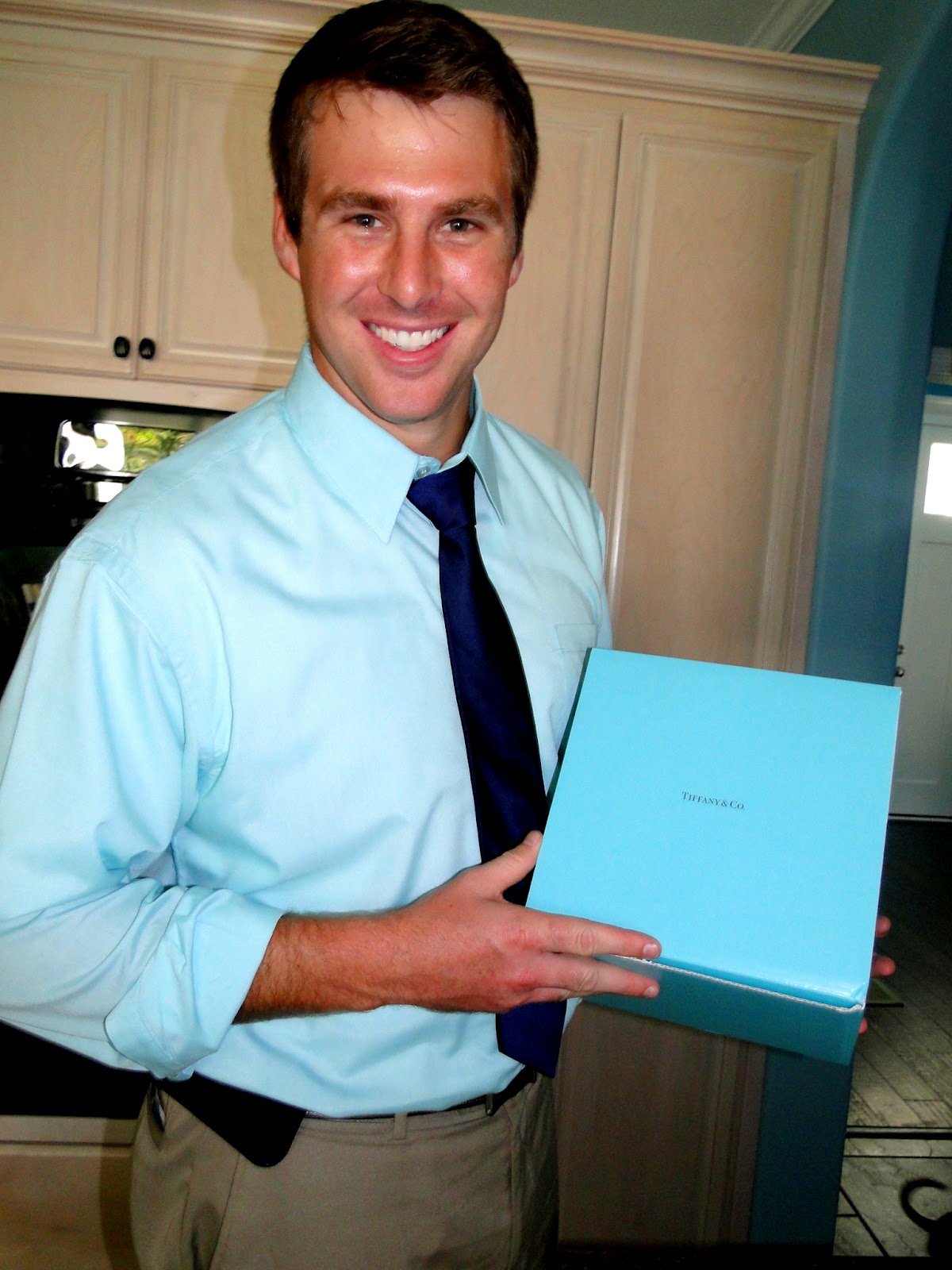 His President’s Club trophy for being top 85 in the country with Aflac last year! Zach’s FAVORITE place to eat is Longhorn’s. They have this amazing chicken parmesan sandwich! We ate there for a quick dinner prior to the movie. I was on my 24 day challenge and did GREAT sticking to it even with our dates. I ordered the chicken parmesan too but didn’t get it as a sandwich and had veggies as my side and didn’t even touch my bread. And we didn’t eat ANY snacks during the movie. I thought I’d miss the candy…but honestly I didn’t at all!

We went and saw Savages. It’s the first movie we’ve been to in AGES but it was the only one out that either of us really wanted to see (we are NOT summer blockbuster type people…). Now that I’m a parent though I just don’t like to see blood, guts and violence. It bothers me a lot more than it used to. The first bit of the movie was pretty rough but overall we both really liked it!!! Blake Lively to me is SO beautiful yet she also seems so approachable. And we’re hardcore Friday Night Lights fans…Tim Riggins? Duh. Especially with the shorter hair!!! Plus John Travolta is like my all-time favorite actor (don’t mention all that scandal stuff…I’m trying to pretend it doesn’t exist). We really enjoyed the movie overall…we were the ONLY ones in the theater and like over half-way through it some guy walked in and scared me to death. After the shooting in Colorado I was a little on edge, but other than that mini-heart attack it was a nice evening! 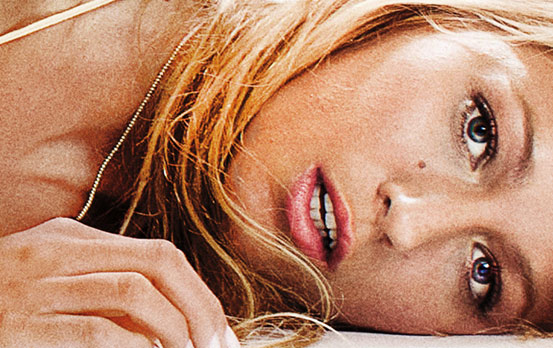 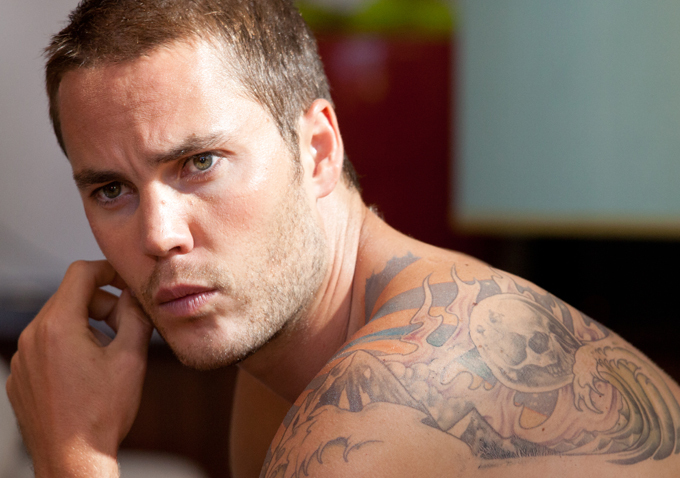 Pic outside of Longhorn 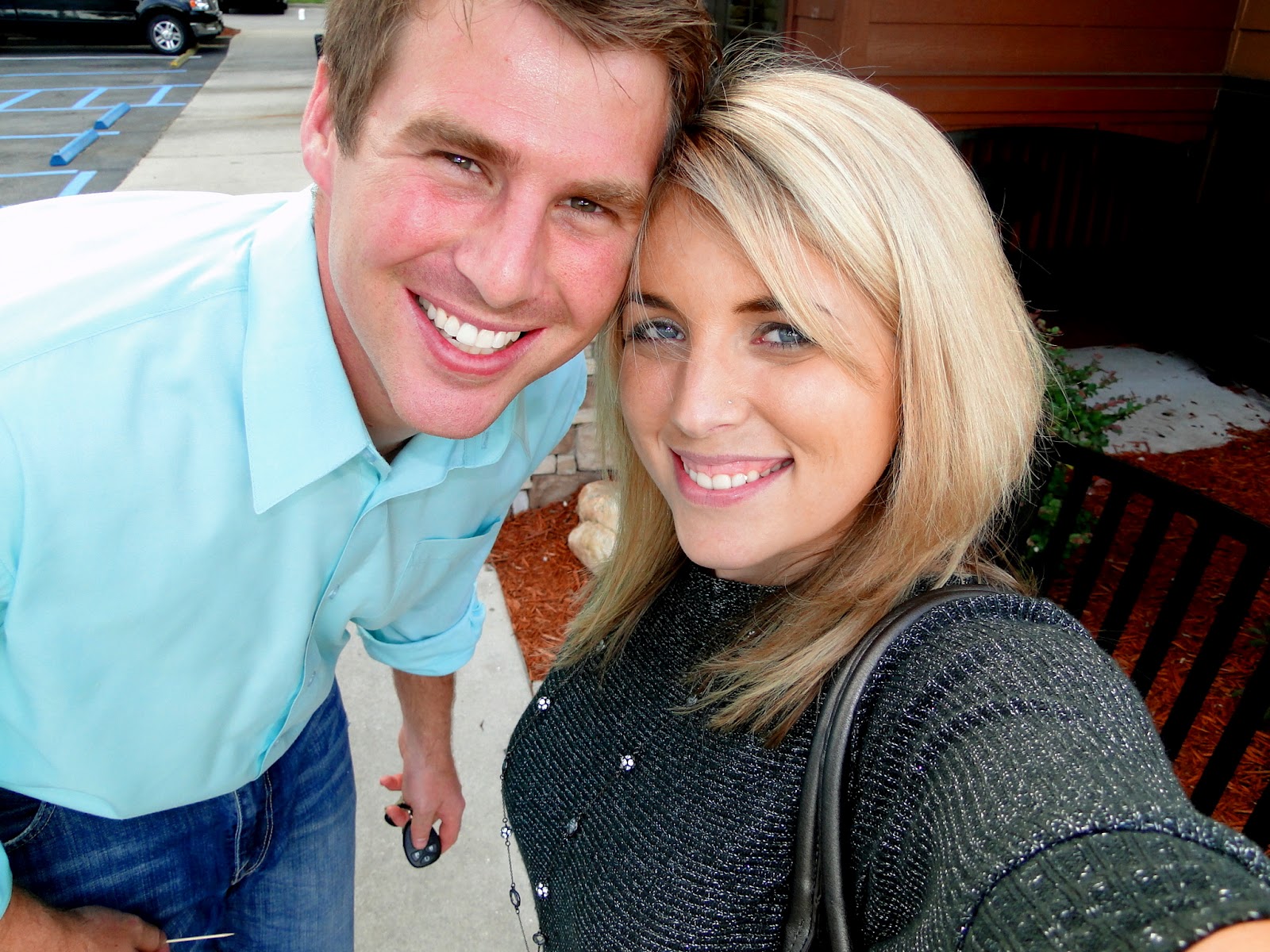 I reviewed the first one and said “wait! you can’t see the sign” so we tried again… 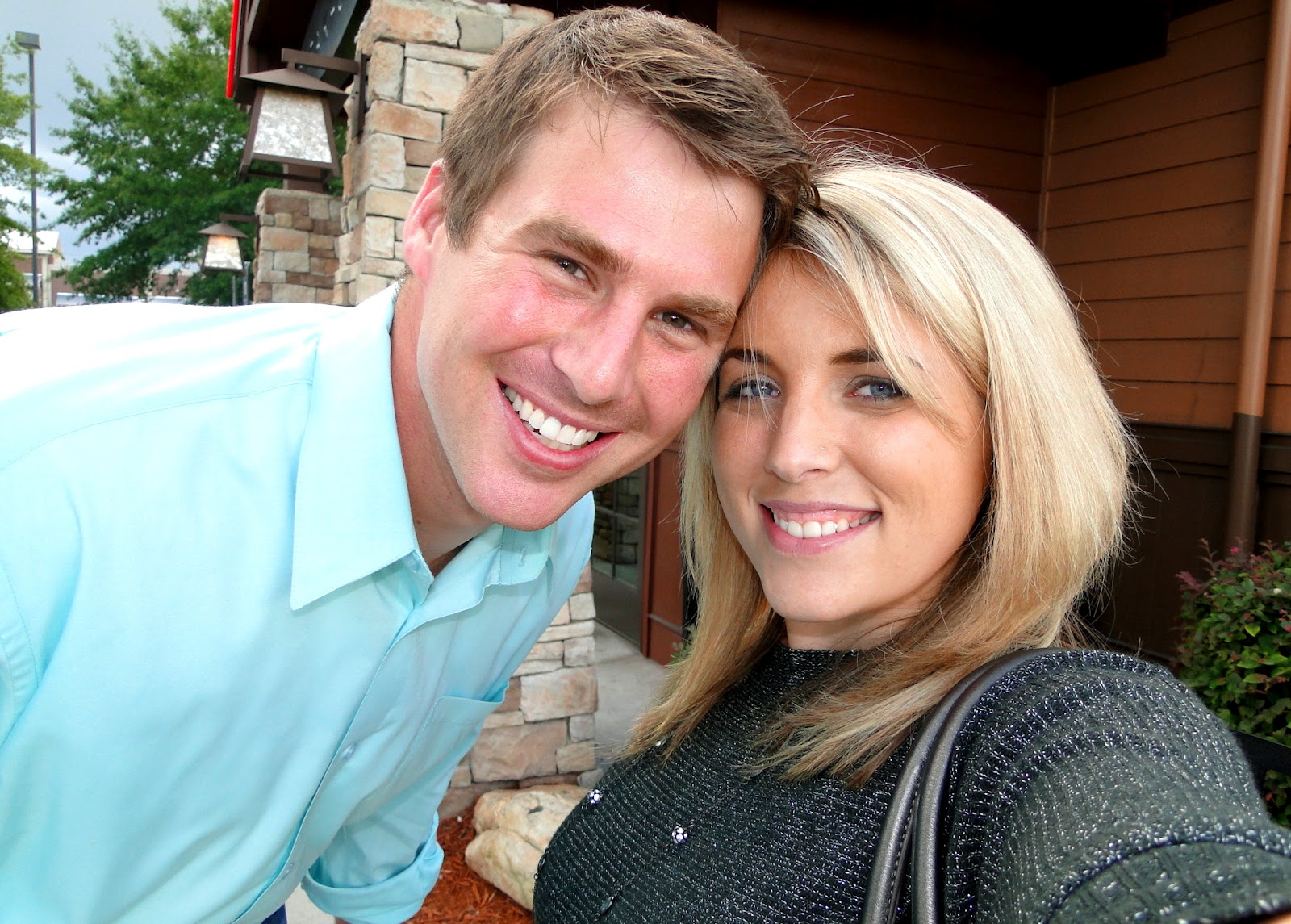 For date night #2 I had my hair appointment that day. Renika at Jordan’s Salon is THE BEST. I trust her completely and she never has disappointed me. I always love my cut and color!!! The past several times I’ve gotten it done I’ve been in a mad rush. I’ve had a kid, or both (nightmare…not happening again…) with me or I’ve had a limited amount of time to get back to my kids for some reason. I LOVED getting to take my time and just enjoy having my hair done. I love the way she styles it…but more importantly ZACH lovesssss it. I feel guilty because he even bought me the same straightener she uses to do the curls so I can curl it myself but I’m too lazy to learn how!!! I need to figure it out!!!

I loved feeling pretty with my hairstyle 😉 For this night we had a nice long dinner date. We ended up eating at Olive Garden. They have a two for $25 deal and we hadn’t been there yet. I know I hate on Olive Garden a lot…I DO like it. I just think it’s lame how super crunk everyone around here gets about it. I mean when it opened here the lines were like out the door, down the street, 4 hours long, and started hours before the doors even opened. Ridiculous. It’s not that good people!!!

We enjoyed our dinner…but were extremely disappointed with the service. SO slow. I’d seen several people complain on Facebook about it and they were all right. I also don’t like the way ours is laid out. It’s so bright and so open that it feels cheesy and cheap. Most of the Olive Garden type restaurants I’ve been to feel a little date-ish but not ours. I would have been totally comfortable having the kids there for sure.

When doing the Advocare 24 Day Challenge it’s best to avoid white wheat products so how the heck would I be able to enjoy some pasta?!?! I figured it wouldn’t hurt to ask if they did happen to have some whole wheat pasta. And they did! SCORE!!! They said they could sub it out with the pasta that came with my meal yet when my dish came…not whole wheat pasta. Normally I would have just eaten it but I really wanted to stick to the plan as best as possible. And they HAD whole wheat pasta and I ordered it so I should get to eat it. I sent it back. And then the manager came out awhile later and said they messed it up AGAIN. He ended up giving it to us for free and the third time they got it right 😉 It was super yummy and worth the wait. And I was SO proud of myself for not snacking on any of the bread sticks while I waited. I legit only ate one and it wasn’t even that good to me anymore!!! 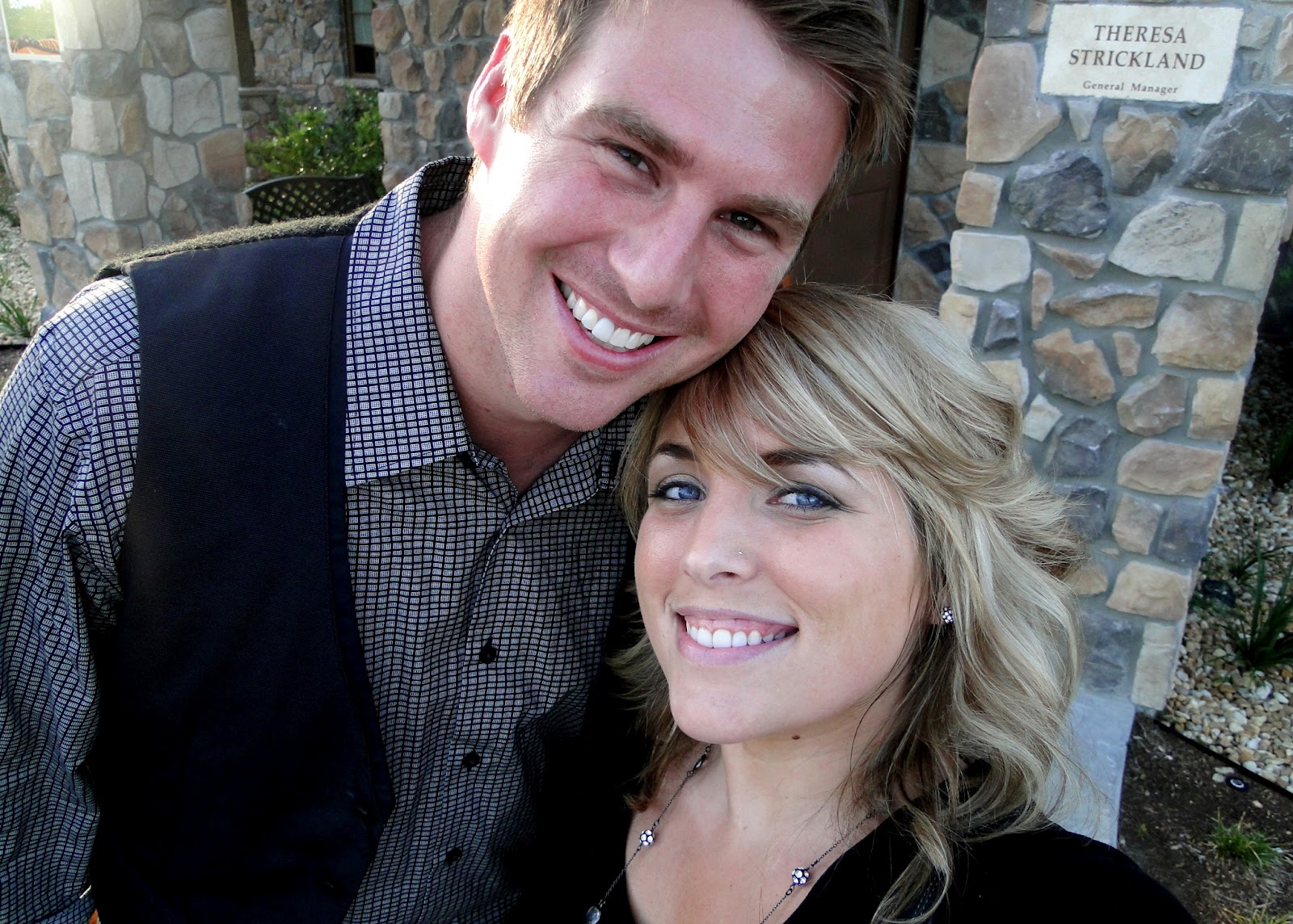 We couldn’t have date nights without SOME type of dessert… 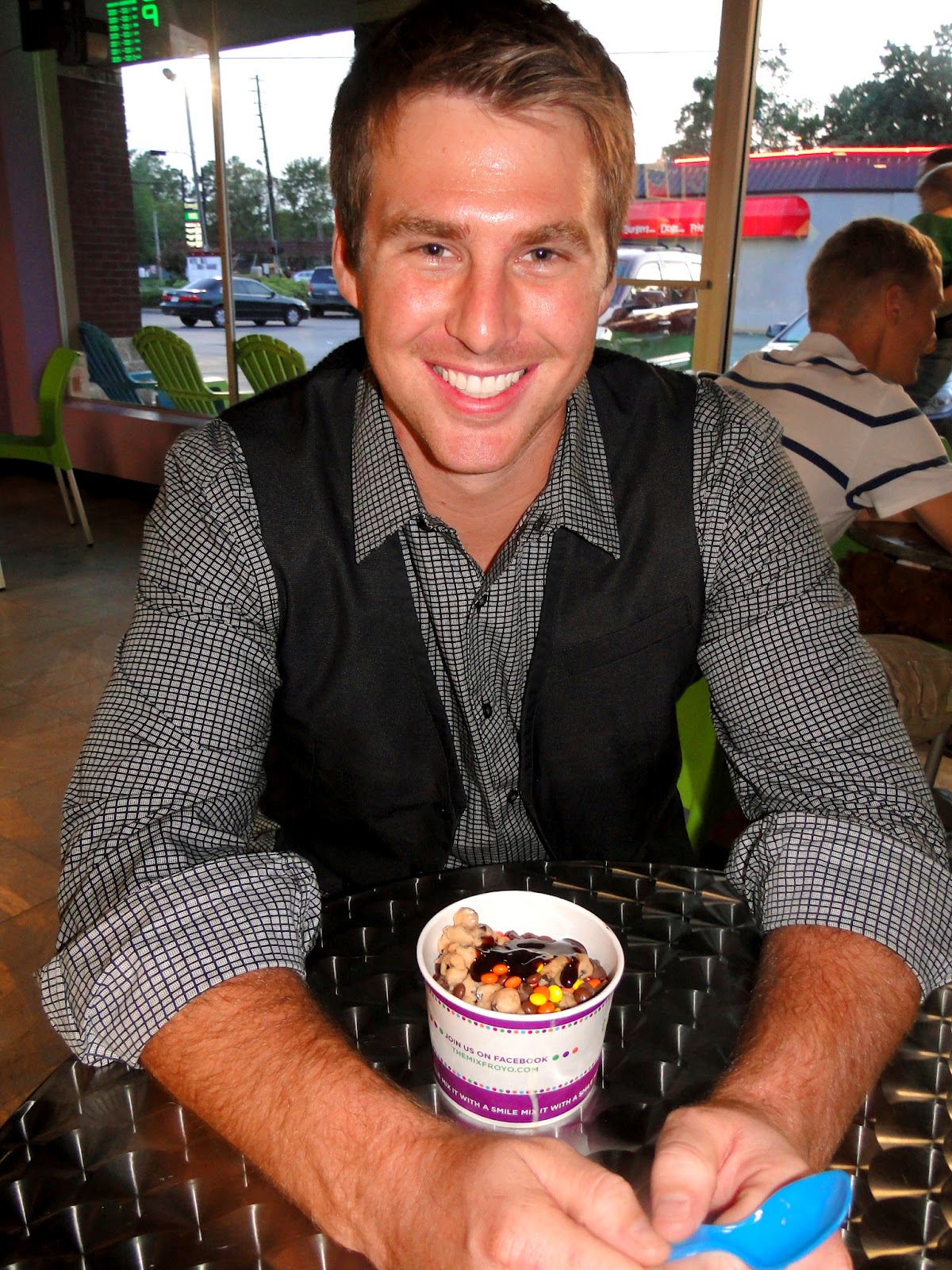 I didn’t get as much as usual. Typically mine weighs a solid POUND haha and this was only 9 oz. It’s about small improvements right? 🙂 The Mix is our new FAVORITE place. We seriously LOVE it. When I first went to one of these froyo places it was Mochi with my brother in Gainesville. I became obsessed with it and tried to talk the Parkers into all of us pitching in to open one in Valdosta. Well someone beat us to it and I’m a big Mix supporter 🙂 When we got there we ran into Javon and his fam. We enjoyed catching up for a bit and Javon was sweet enough to offer to take a pic of us together. I’m surprised he could figure out my fancy point and shoot camera 😉 At least I didn’t have the flash setting turned on right Javon? 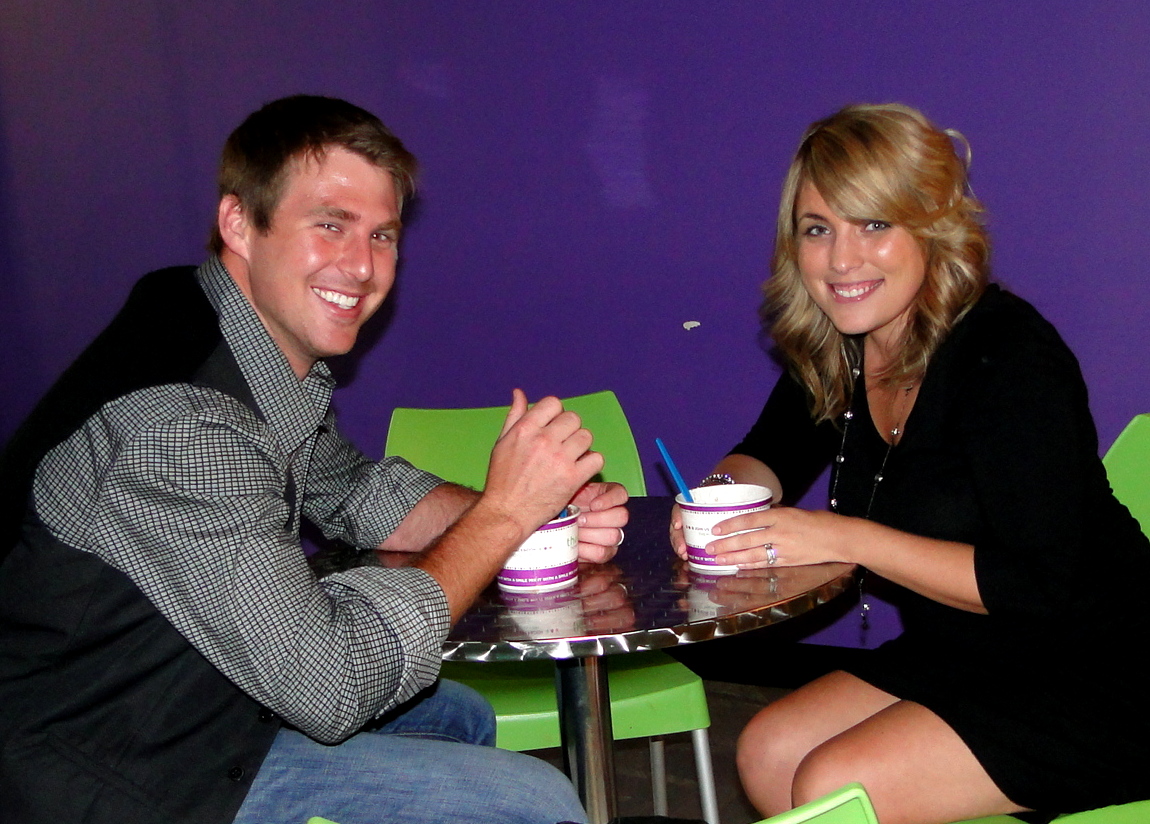 Our date nights were so great  and MUCH needed (And cheap! We had gift cards for Longhorns and the movie and since my
part of the Olive Garden meal was free we spent about $20 total for two
date nights!)!!! It was nice to take our time and not have to rush home for anything. But it was also SO strange to be in our house without our kids. I had to turn on the fan we use for white noise in Britt’s room b/c I now need the sound of it coming through the monitor to sleep!

I’m super thankful to my awesome in-laws for enjoying keeping our babies. They had a BLAST with them and it always makes me feel so good to know that they want to have them. I know I’m not burdening them with babysitting and that’s a blessing! We REALLY need to get back into a regular date night routine. I remember when we used to go weekly. Now I think monthly would be an awesome goal 😉