Growing up Zach had a super tight group of guy friends and one of them was Don. They attended church together throughout childhood and even lived together in college for awhile. During college we were really involved with the Christian Student Center on campus and became very close with Wes and Carolyn who headed up the whole thing. I very much admire their marriage and think they are such cool parents! Through the years we’ve gotten to know both of their younger children, Alden and Sara, and really like them as well.

Wes, Carolyn and Alden on our CSC trip to Savannah! 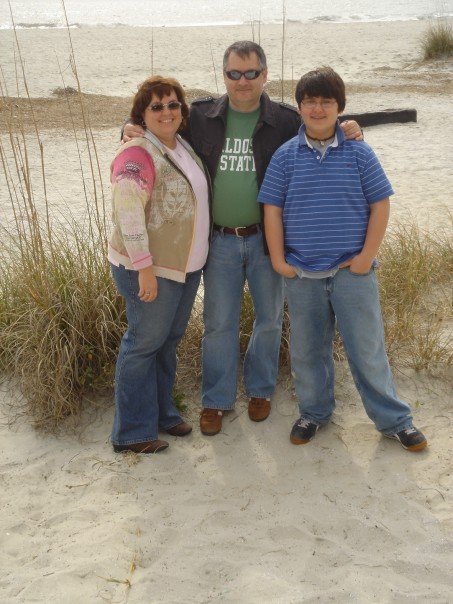 It’s so neat to me when two people who have known each other for a long time end up together. Zach and I were strangers and when we met we started dating. I’ve actually NEVER dated someone who I knew prior to us dating. So I think that’s just an awesome thing! Like how does that moment happen where you just realize someone you’ve known for a long time is “the one”? It’s the kind of story movies are made of and I love it!

Sara and Don were both involved in the Christian Student Center (by that time though we had quit going…I mean once you have kids you kinda can’t keep hanging out at the college campus ya know?) and fell in love! They are totally the next Wes and Carolyn!!! I’m so super happy for them!!!

Their wedding was on August 18th and we made sure to not schedule anything so we could be there! I LOVE outdoor weddings. Zach and I both prefer them to church weddings…which is why we also got married outside 😉 Sara had put a lot of thought (and pinning!) into planning her wedding and I was excited to see all the little details. During the ceremony Casey said “you just LOVE weddings don’t you Emily?” And it’s true. I totally do. I would be a hardcore wedding crasher…not to pick up dudes haha but just to see the weddings 😉 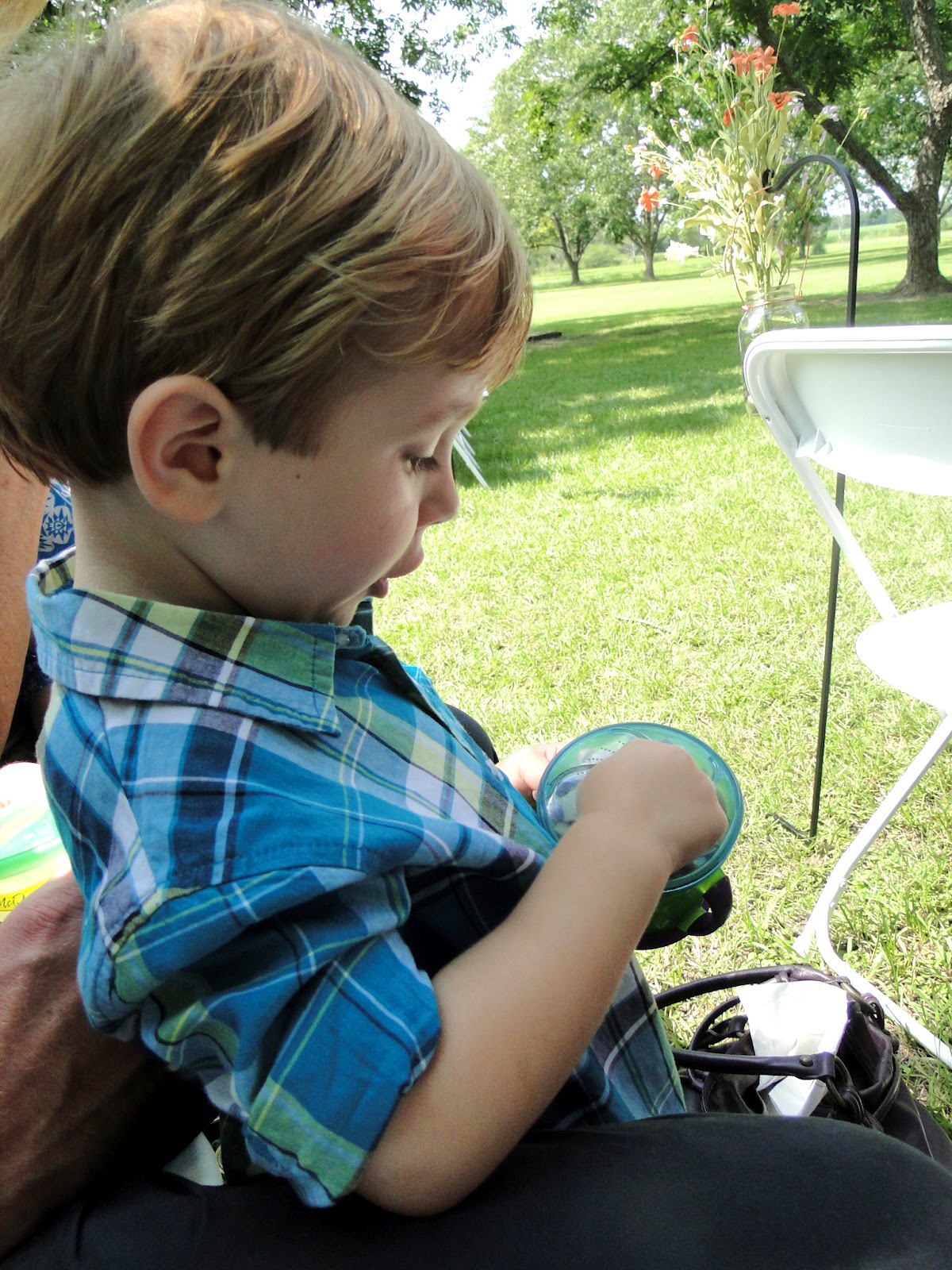 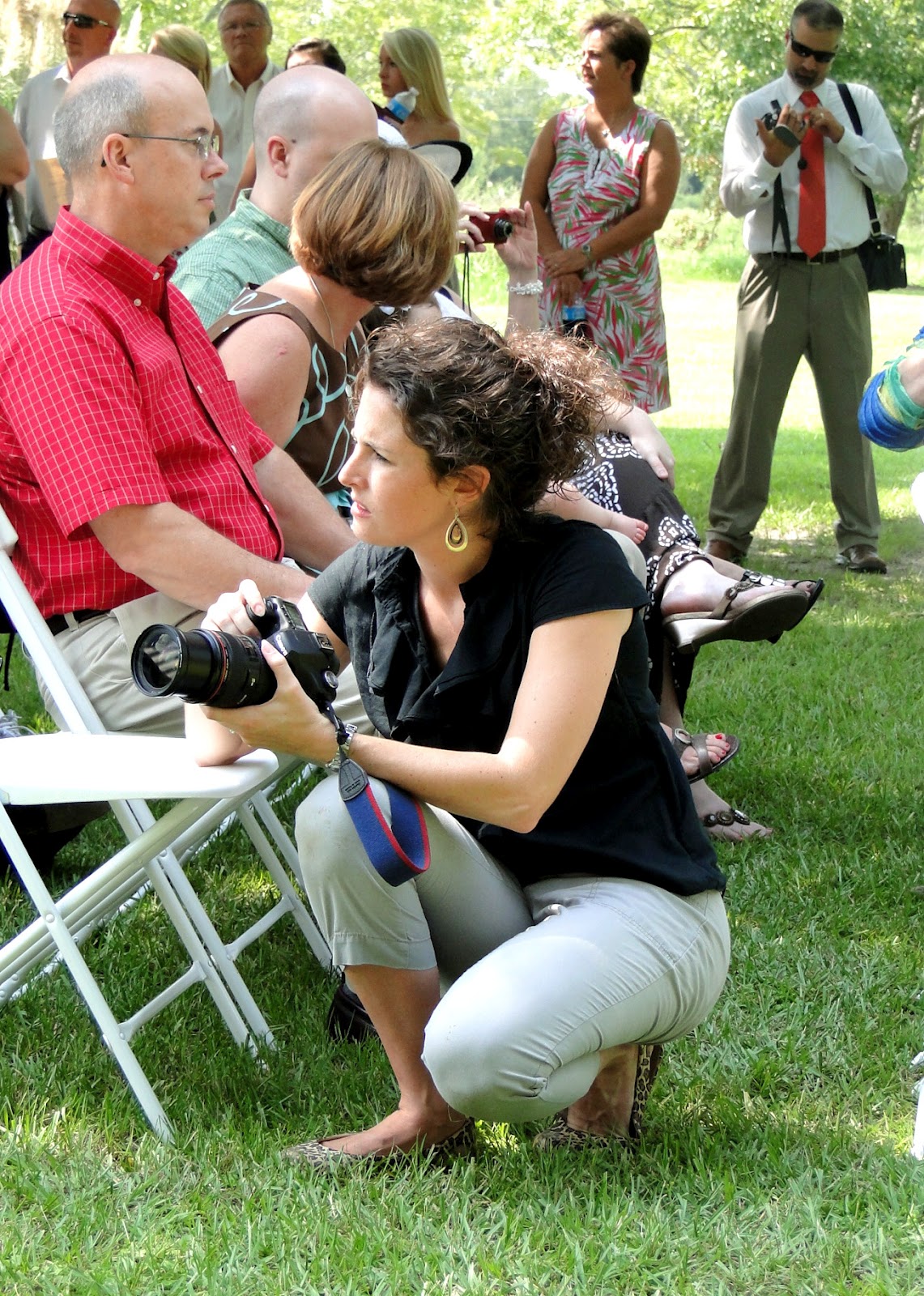 Waiting on his bride 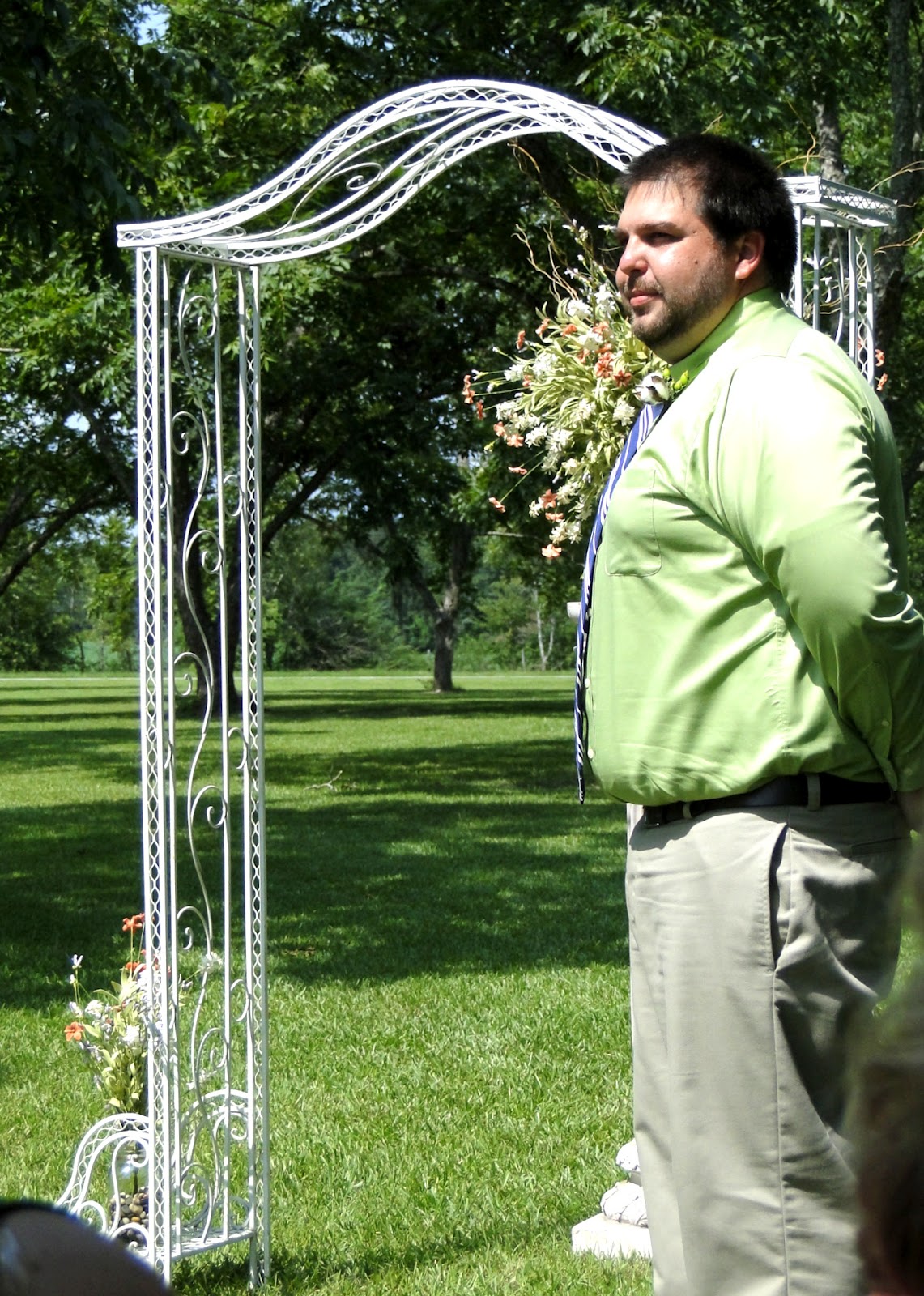 I LOVED all the little country chic touches. The bridesmaid dresses were super cute and I’ve always seen the cowgirl boot thing on Pinterest but haven’t ever been to a wedding where it was done…VERY adorable and really brought home the theme 😉 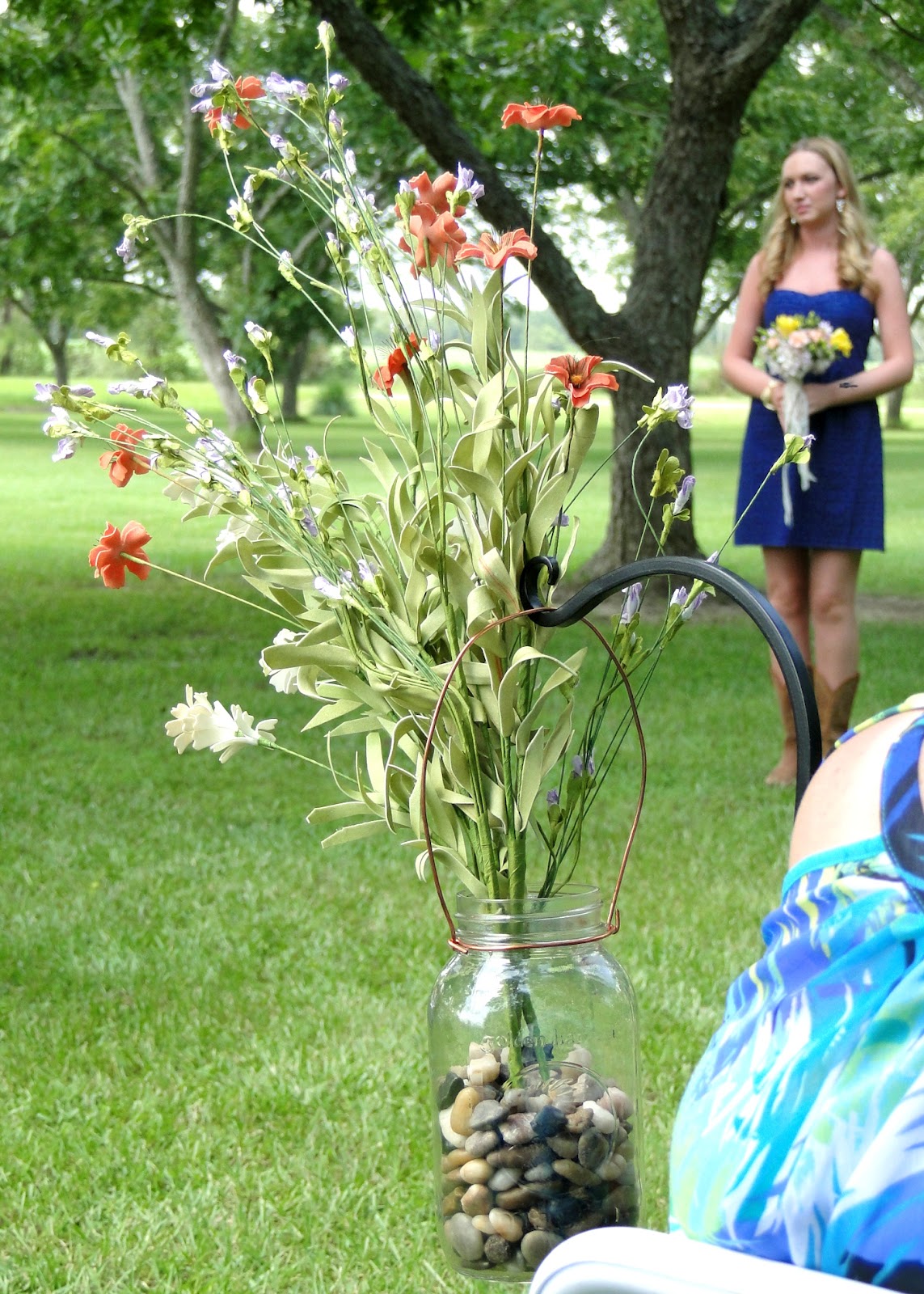 Kye’s favorite girl was a flower girl and he was on the edge of his seat the entire ceremony b/c he wanted to go give her a hug (actually he said “no Mommy…not a hug a KISS” but I encouraged it to just be a hug…I don’t want her Daddy to beat up my child haha). She and her sister looked PRECIOUS as did all the children involved in the wedding party! 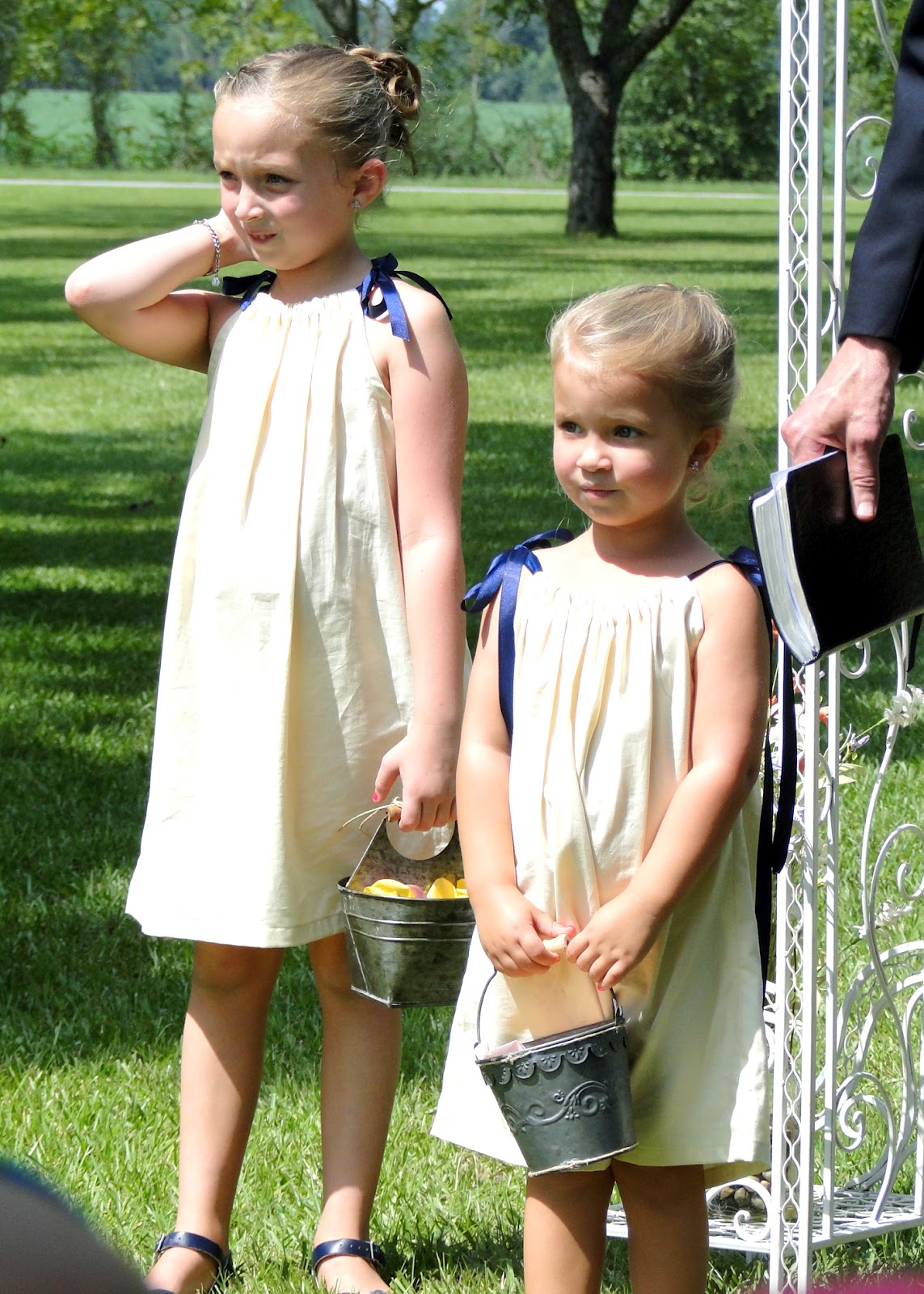 Brad was the best man and played the part well! 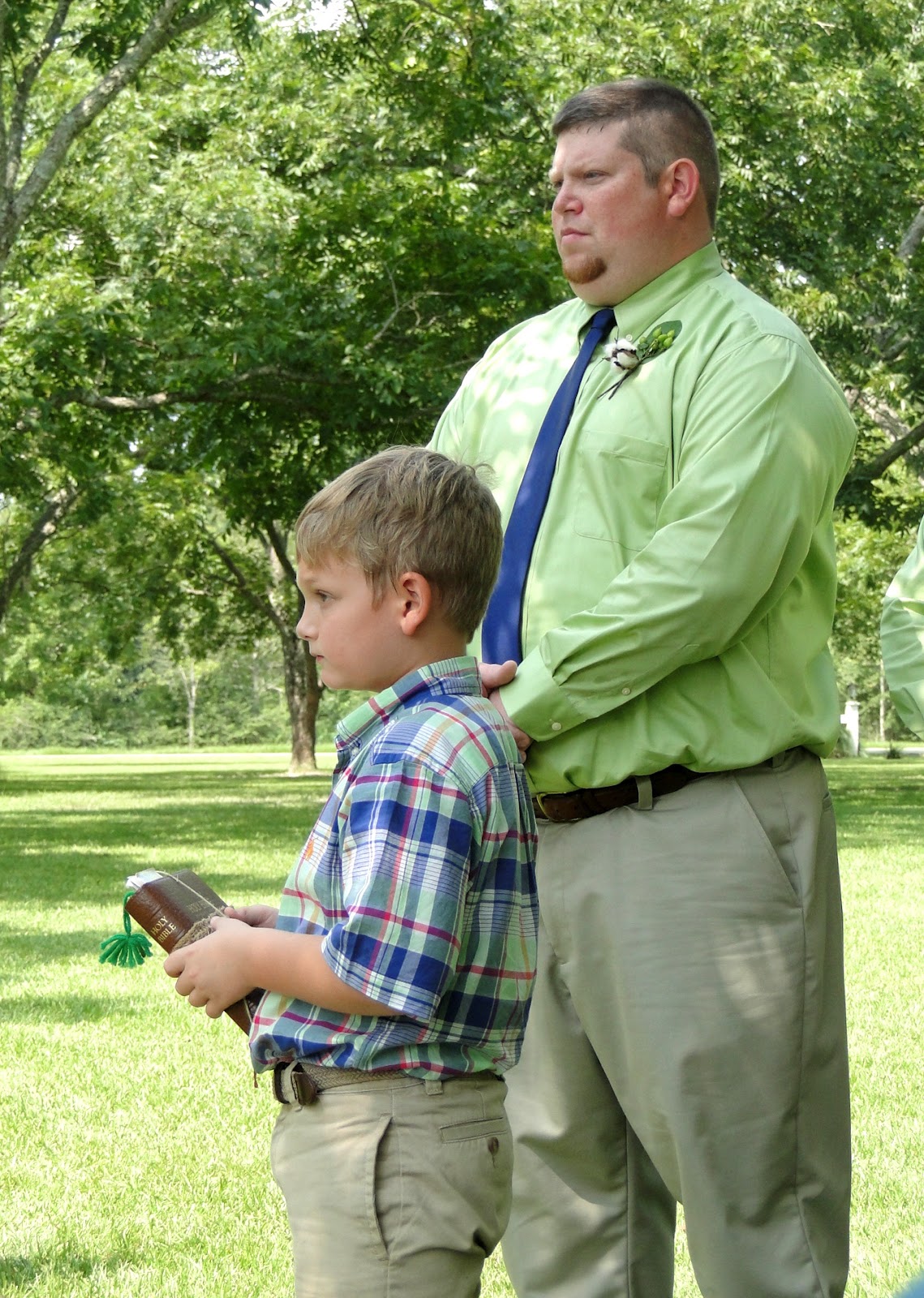 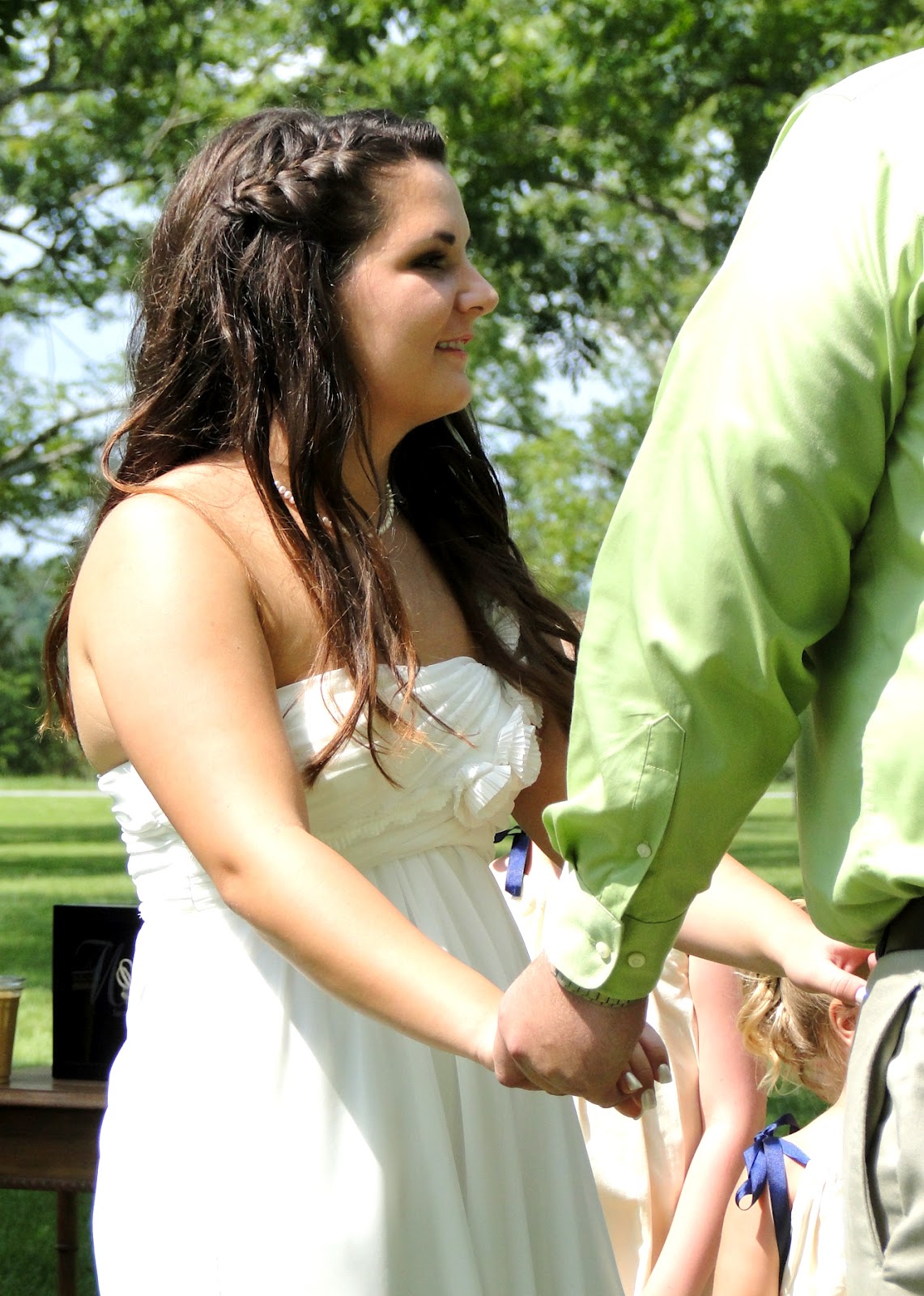 I’m just throwing this out there…if anyone is ever in need of a flower girl or ring bearer sign my kids up! Gives me an excuse to get to go to more weddings as at this point in our lives pretty much everyone is married off!!! 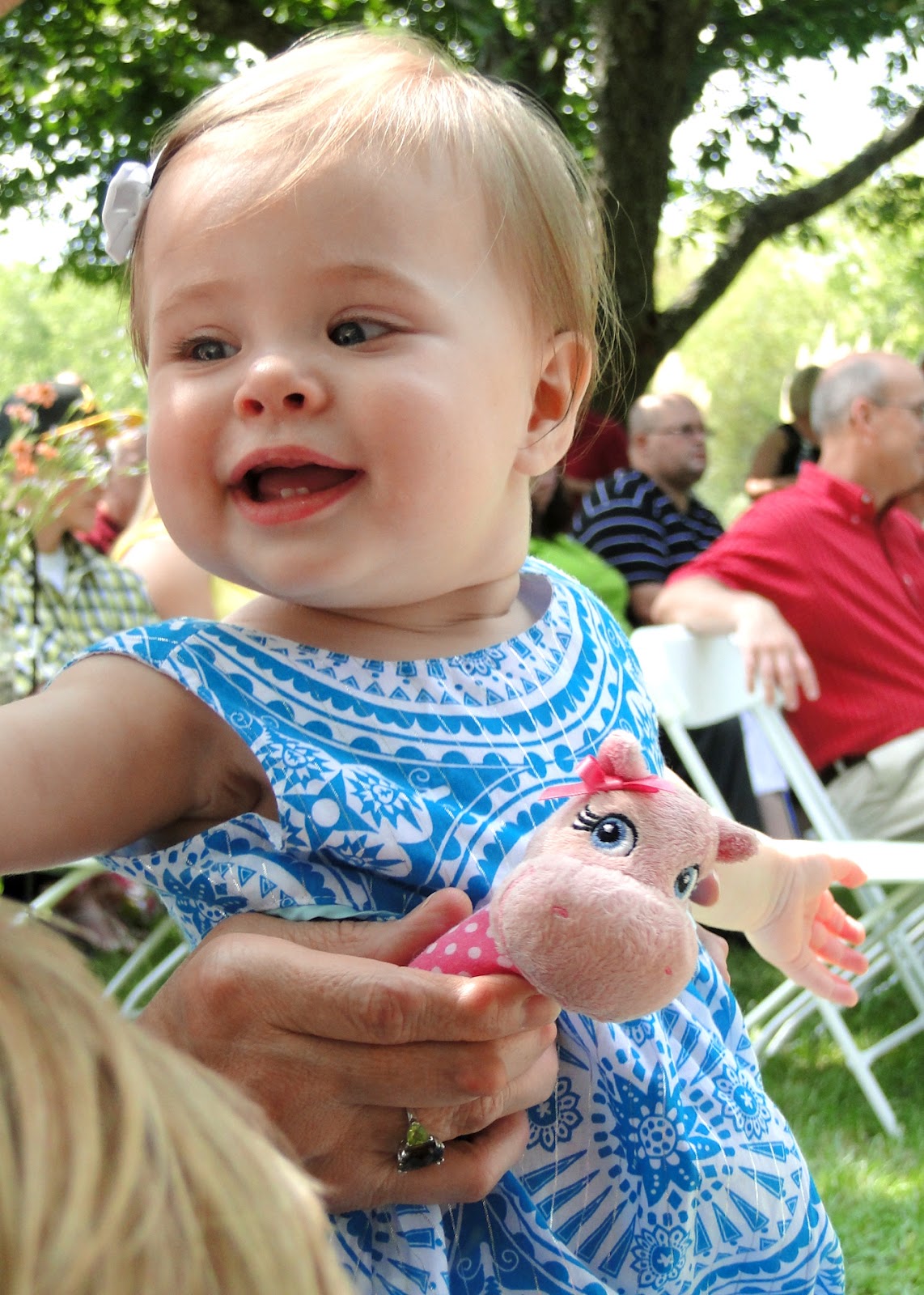 Sara’s brothers…Alden and Daniel. Zach and I couldn’t get over how GROWN UP Alden is and how handsome too! 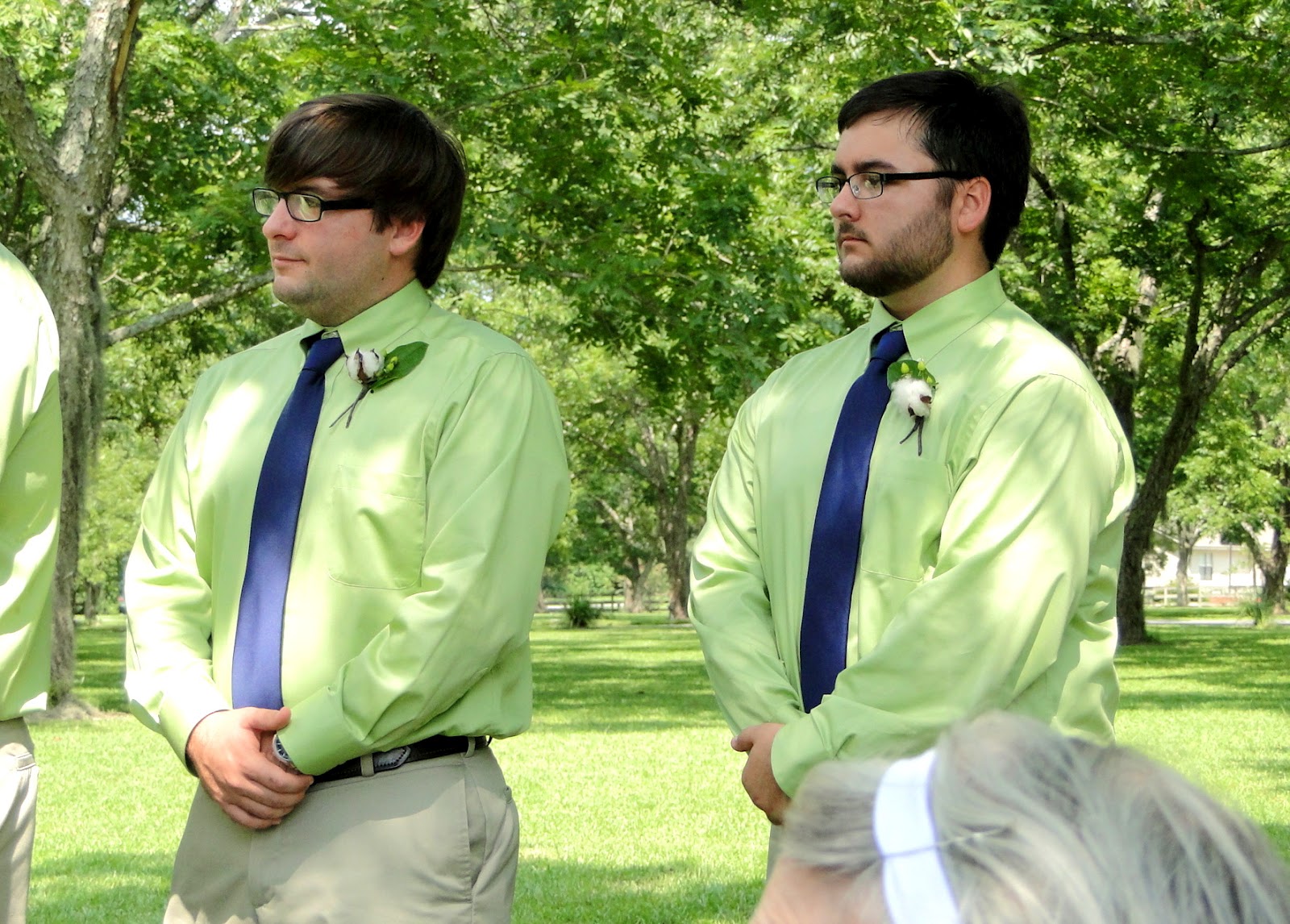 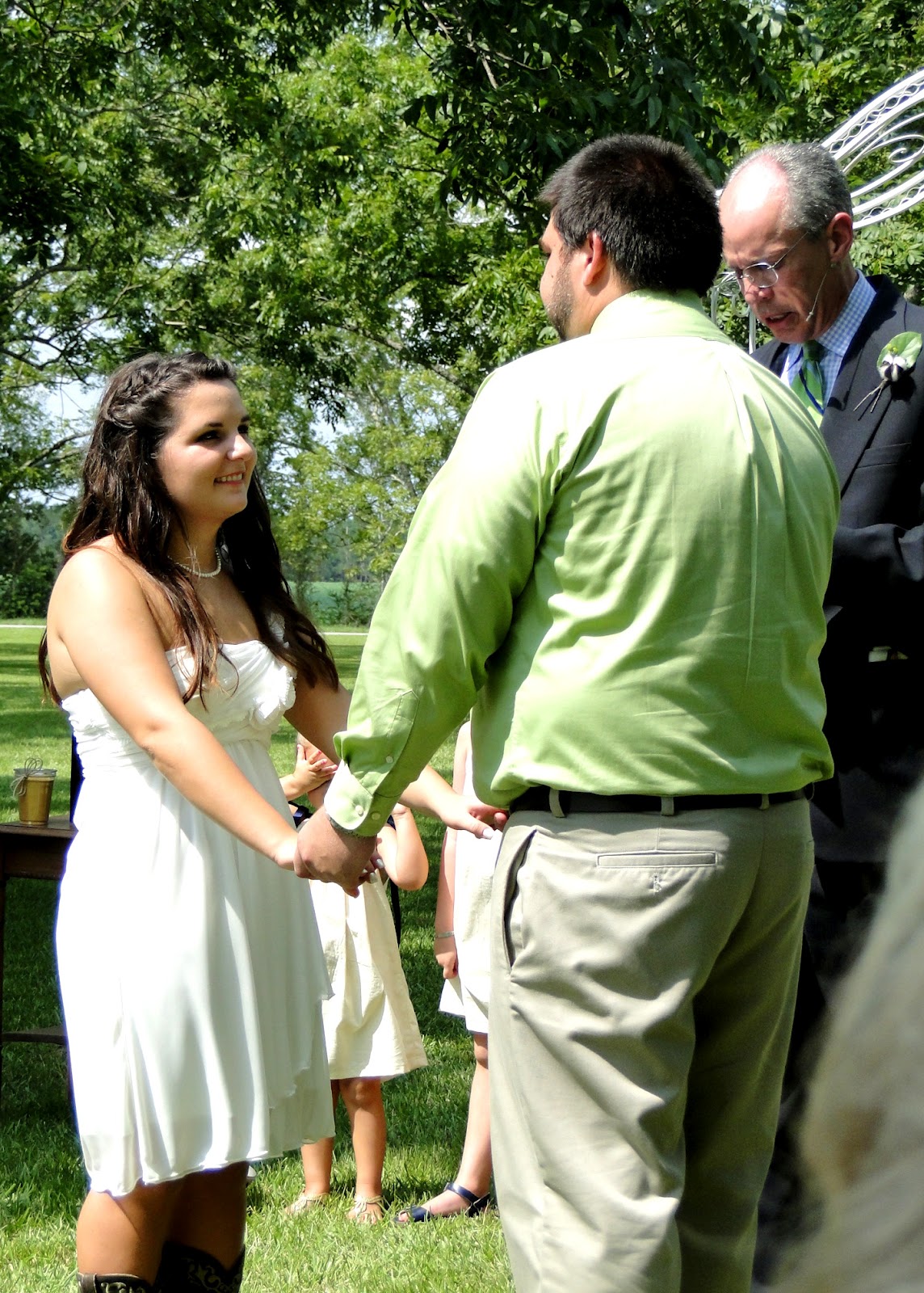 I know the flowers are in the way but I LOVE watching the parents of the bride and groom during a ceremony. Wes’ smile was SO precious to me! 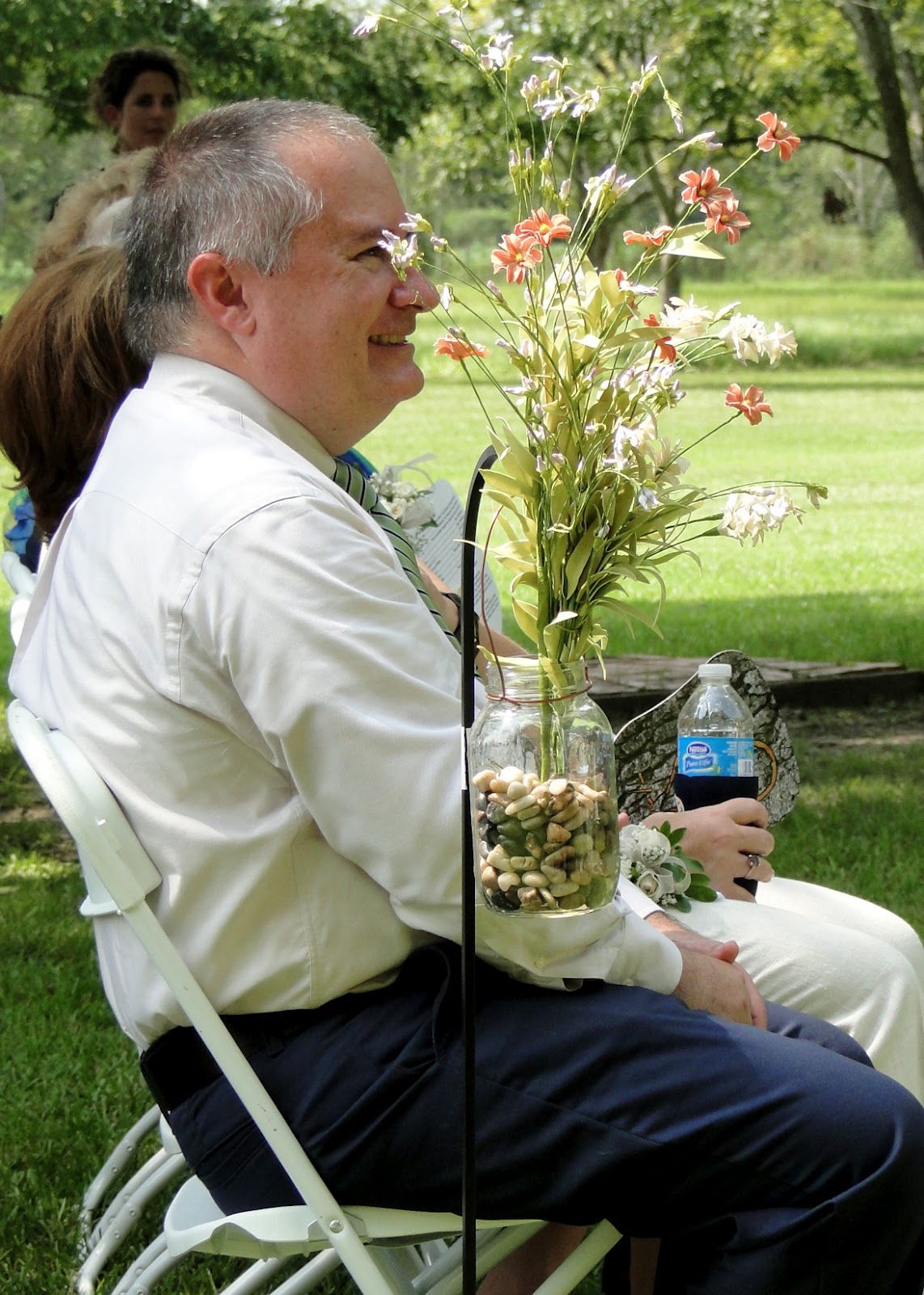 I was SUPER proud of the kids. We actually debated whether or not we should go to the wedding. It was at 3:30 but kinda a bit of a drive away so that meant waking them early from naps and I wasn’t sure how Brittlynn would behave as she’s at that age where she’s SO LOUD. Plus it was a hot afternoon and I didn’t know if that would make the kids crabby. But they did AWESOME 🙂 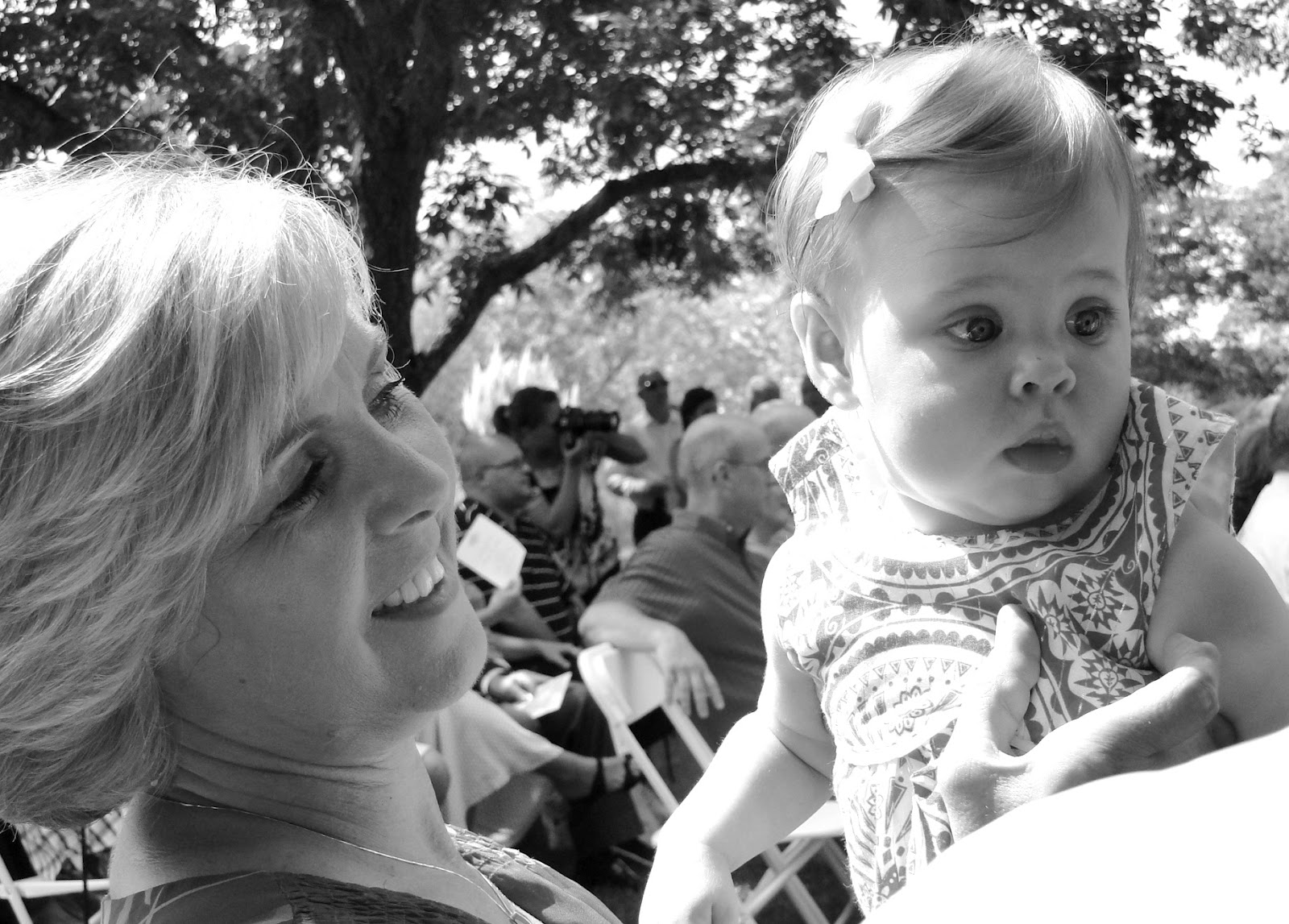 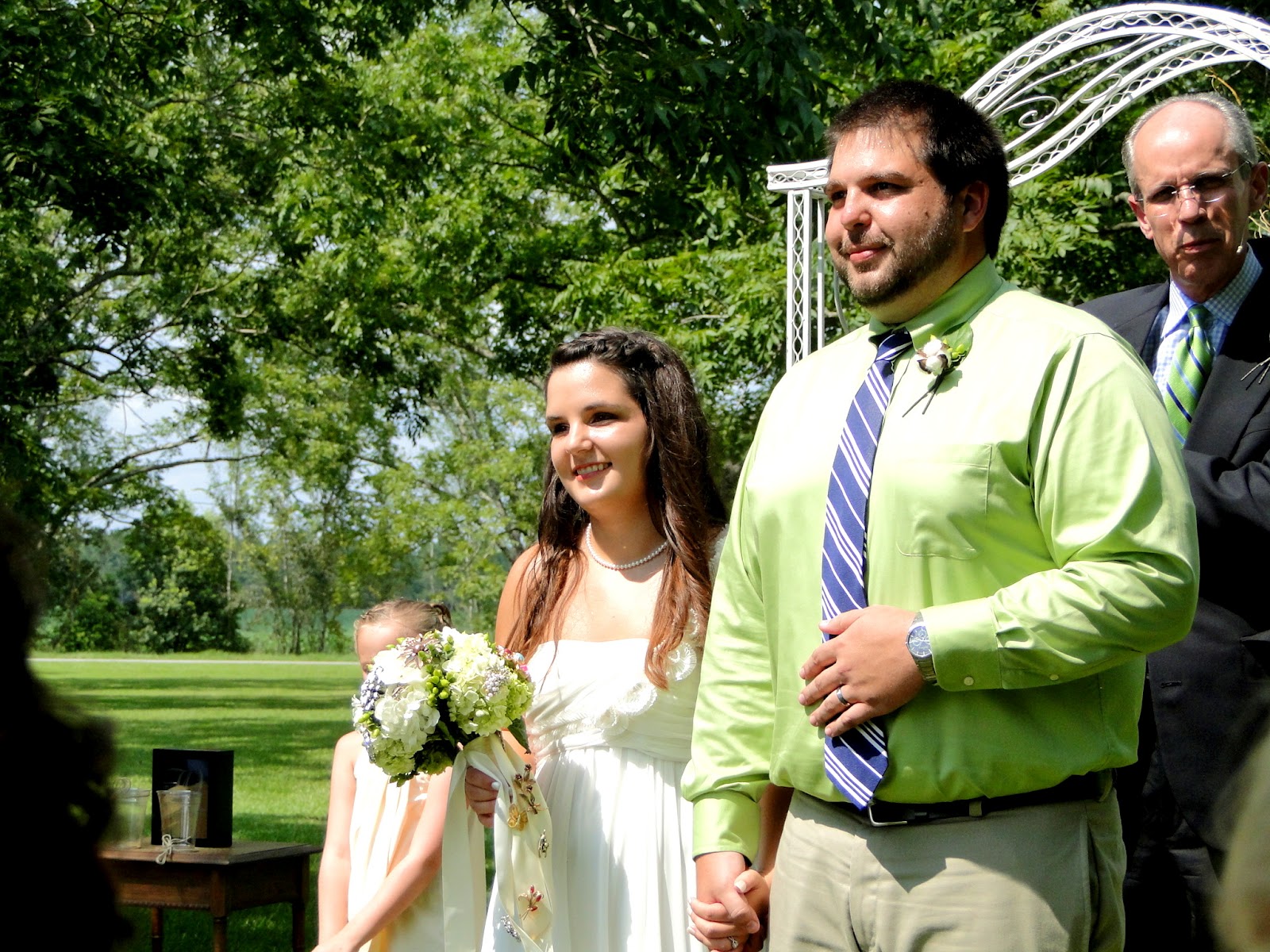 Mr. John is one of our favorite people. He and his wife, Mrs Liz, are just awesome. They are the type of people we aspire to be! Kye has a routine down for church services on Sunday mornings…he knows when Mr John goes up to the podium that it’s time for him to eat his lunch. So when he saw Mr. John he yelled and pointed to him and got all excited haha. He did a beautiful job with the ceremony, as always, and made this wonderful face just for this picture 😉 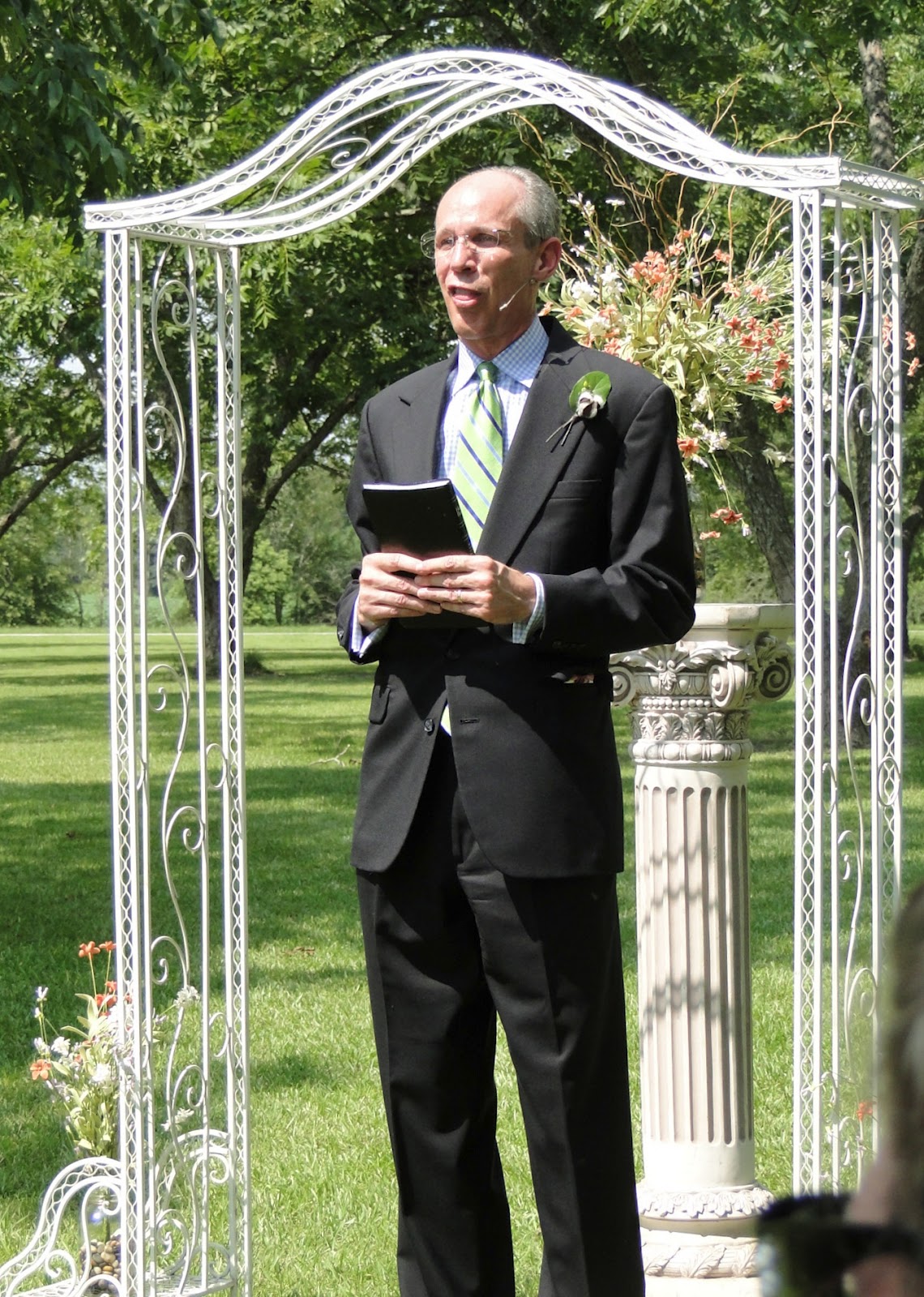 The setting could NOT have been more beautiful. IF I had gotten married in a church I always pictured myself in a little white chapel similar to this one 🙂 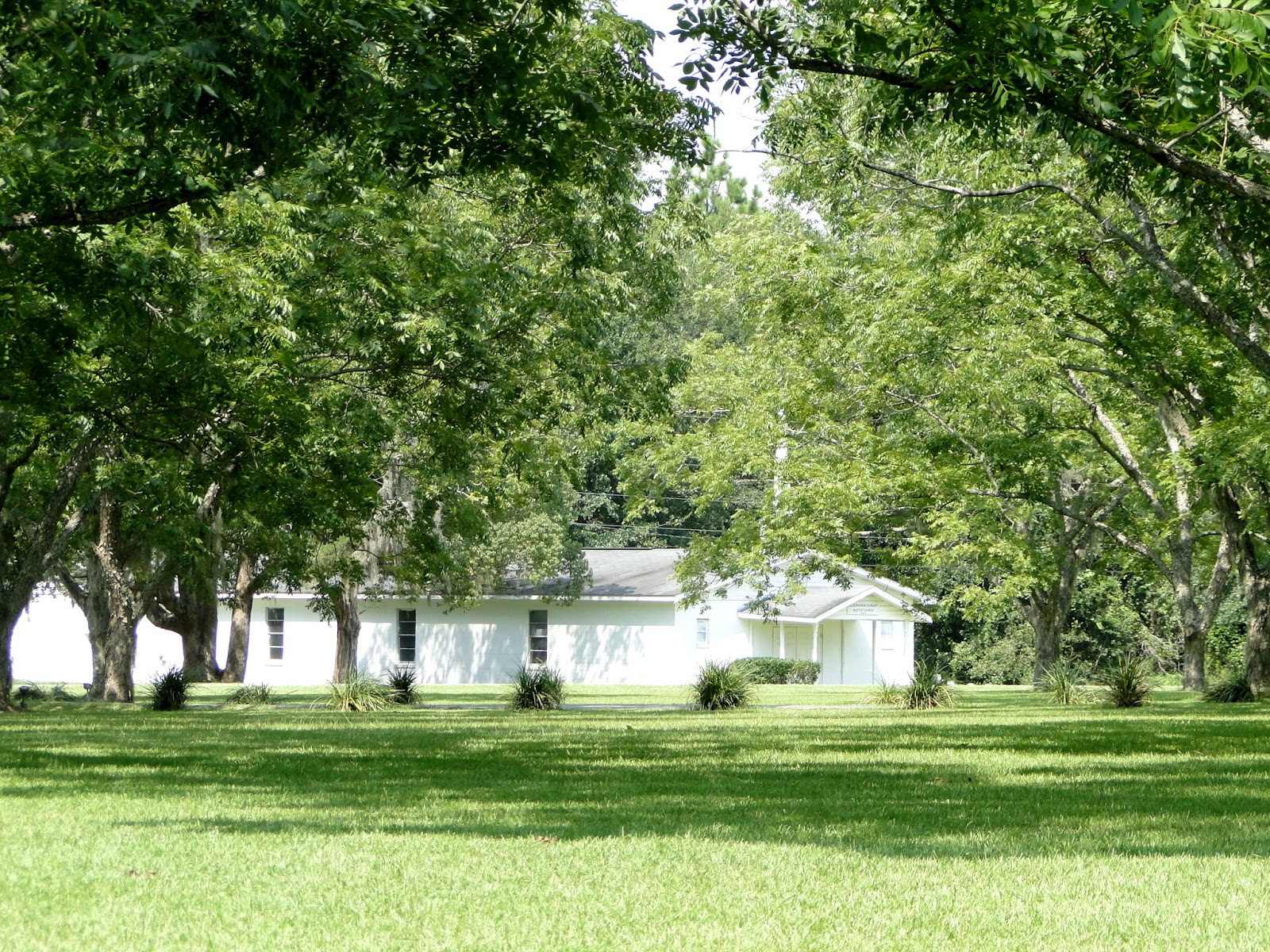 Kye was pumped about getting to drink the “pink drink” at the reception (pink lemonade…Cool Mom Moment!) 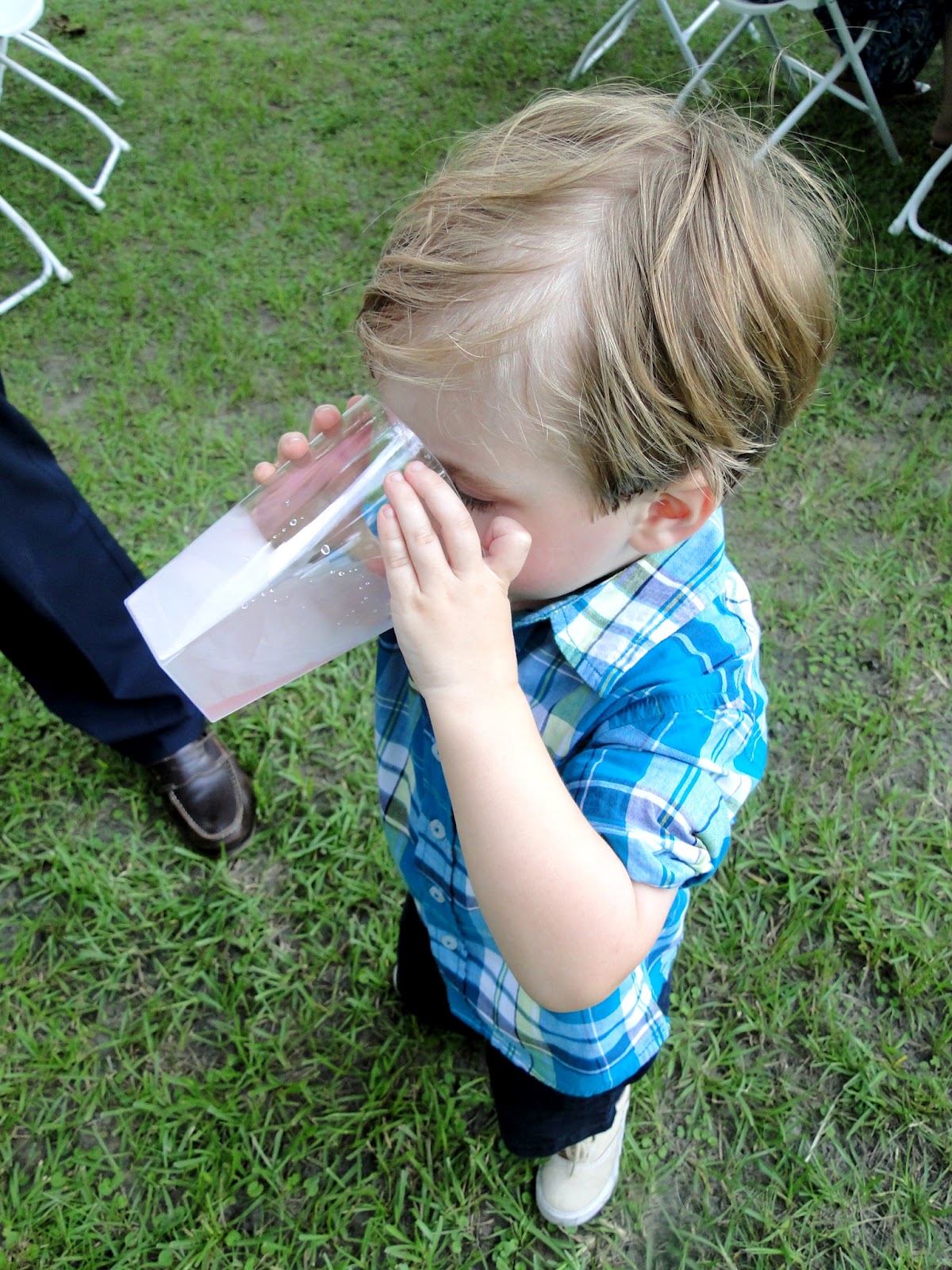 What Kye was most excited about though was KAILYN. Since she was part of the wedding she had to go take pictures and everything so it was a little while before she came outside. Boy was my child excited!!! It was super cute!!! They chased each other all over the place! 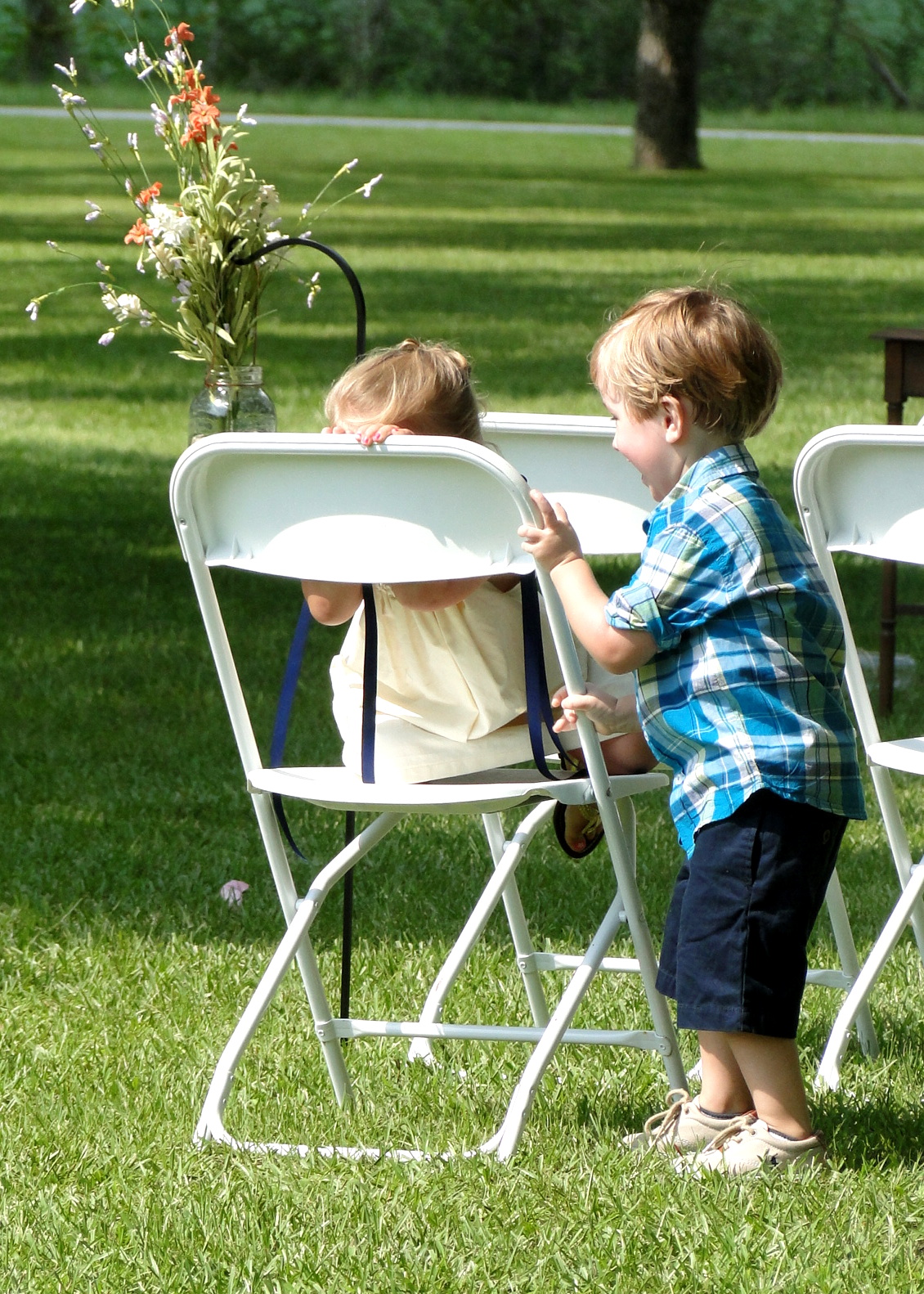 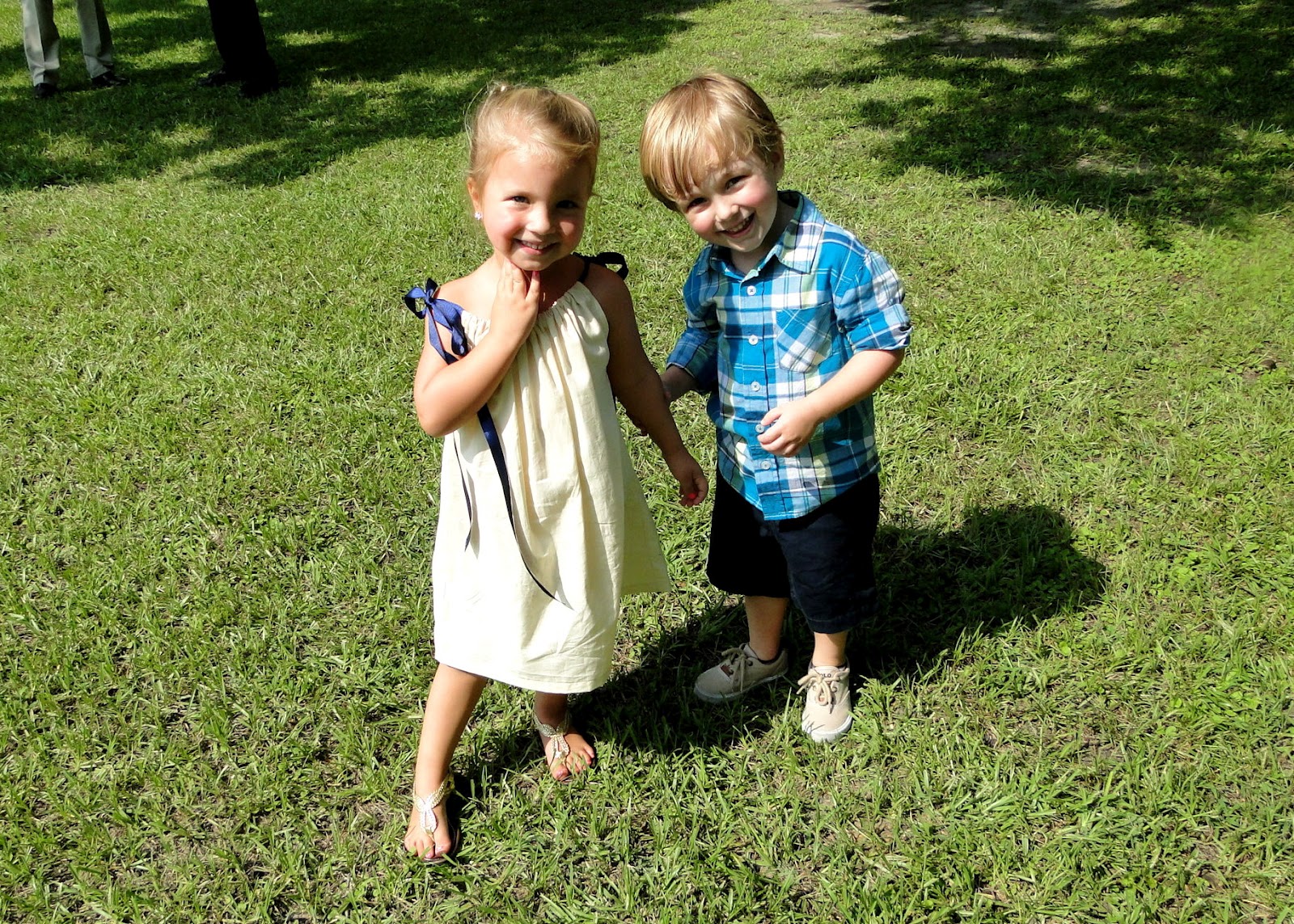 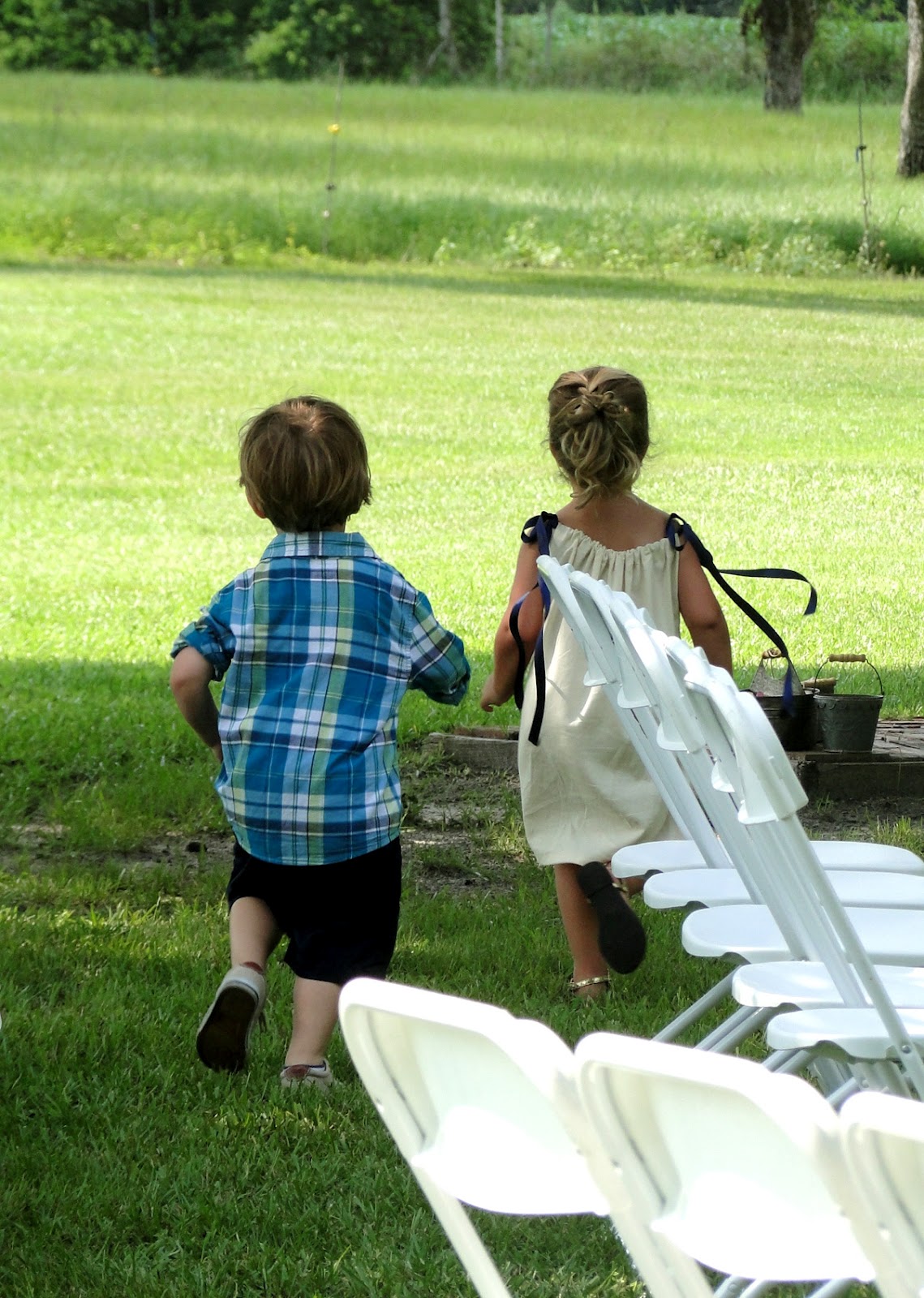 Jessica and I chased them to try to get a pic of them together. Kailyn had reached her limit of pictures for the day. When we left I asked Kye if he had fun at the wedding and he said “Kailyn didn’t want to get a picture with me” He was so sad about it. 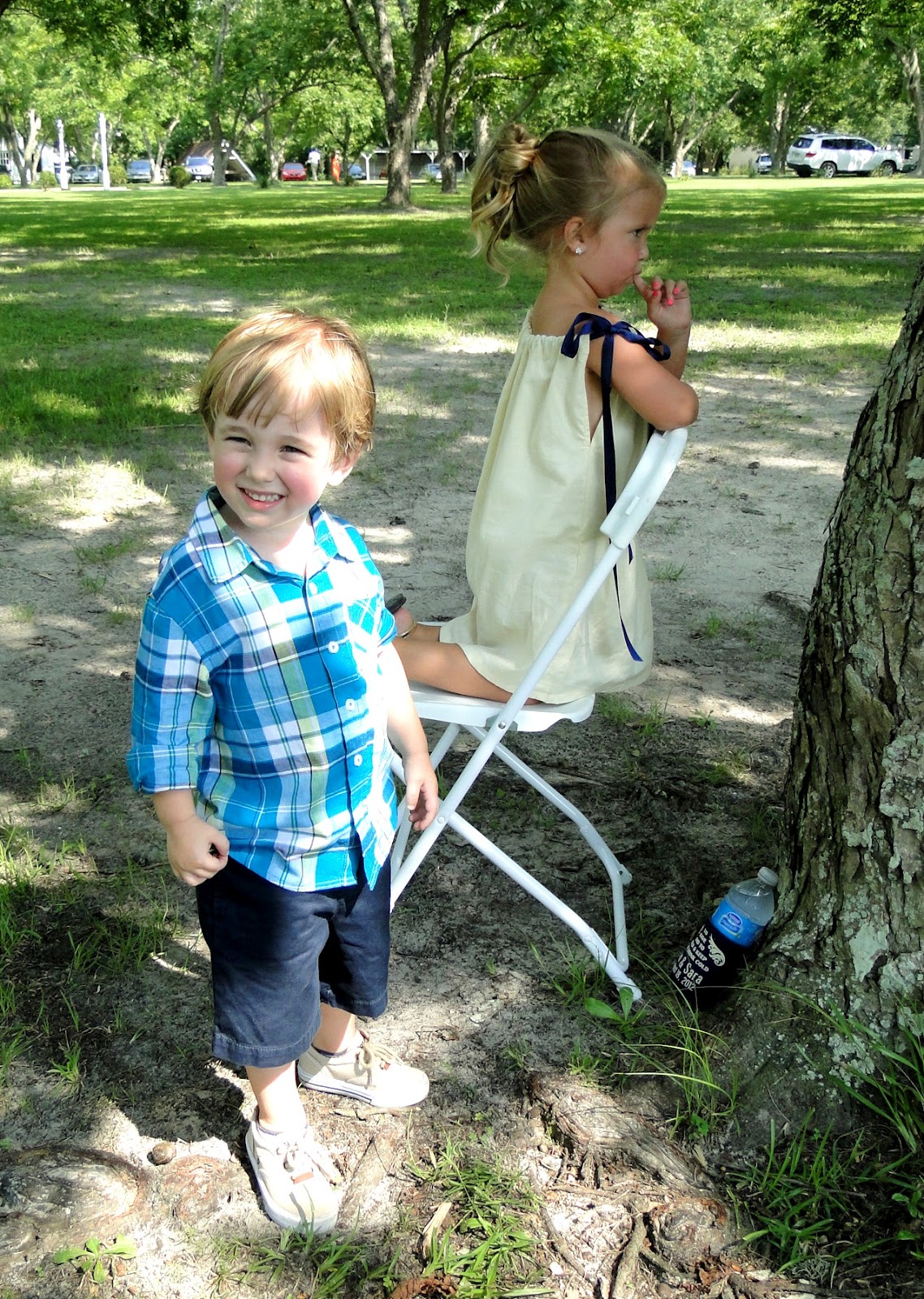 The wedding was SO beautiful. I hate that I didn’t get more pictures but when you’ve got two kids it means that we each had a kid the entire time…a lot of the time I had both of them so Zach could mingle. There were a TON of people there that he hadn’t seen in years so it was good for him to get to catch up a little bit!

We didn’t stay too long at the reception as it got hot for Brittlynn. When we got home we all jumped in the pool and had a blast cooling off and hanging out together 🙂

I know I just showed you a TASTE of this beautiful wedding…to see more you can check out the pics Lindsay posted on her Captured By Colson page here! I’m a wedding picture junkie so you know I’ve checked them out already 😉 So thankful we were able to be part of such a special day!