If you read no other tip I write, read this one Tip: BOOK A CHARACTER MEAL!!! It’s expensive, yes, but it’s 100% worth it. Who wants to spend hours waiting in line after line to meet the characters when you can knock them out in one meal? I personally don’t think Disney offers enough character meals. I really wish they had a Toy Story one. Or at least a generic Pixar one with some of the favorites from those movies. Anytime we do a big Disney trip, we WILL do a character meal again! For sure!

The morning of Day 4 (Saturday Sept 24th) we had our character meal. I would have liked to have it for legit breakfast but since I didn’t schedule it 180 days out (had to move our trip due to pregnancy!), the only time slot we could get was 11:10. It honestly worked out perfectly though. Kye was able to sleep in and eat a light breakfast then play and relax with Mom and Mrs. Charlotte while Zach and I did our timeshare presentation tour. We LOVE traveling on timeshare trips because they are very inexpensive and we don’t mind doing the presentations. This time around, though, was our worst experience ever. Even worse than in Mexico where they are SUPER pushy.

Typically Zach and I are overly nice to the timeshare salesman. Zach’s in sales and has respect for what they are trying to do. Plus I just like people and could never be rude! This time we needed to get out of there fast though. Our meeting was at 8 and was supposed to be 60 min long (they are typically 90 but always go longer and this was a surprise to use that it was 60!) so we needed to time to get back to the room and get ready for Chef Mickey. We ate breakfast before so we wouldn’t kill any time enjoying their free breakfast they always offer. We were ready to get straight to business. The sales guy was straight up RUDE right from the start. So, so rude. EXTREMELY condescending. I don’t think I’m a genius or anything, but I’m a pretty smart girl and I don’t need some guy telling me how stupid I am. Which he pretty much did, repeatedly. He basically told us that for the amount we travel we are stupid for not owning and traveling with the real deal timeshares. That no one does marketing packages (which is ALL we do ALL the time!).

At about 8:45 he said it was time to go tour the property and I said that we had a character breakfast and were told the meeting would end at 9. He brought over his boss and insisted that most people enjoy the tours and meetings and don’t rush to leave! We told the boss guy our situation and that we were told it’d be 60 min. He started to fight us on it too and Zach couldn’t stand it anymore. He said “It’d be a waste of everyone’s time. We aren’t buying anything and we especially wouldn’t buy anything from this condescending jerk.” The sales guy was even condescending in front of his boss! He kept saying “condescending? condescending?” The boss guy signed our little slip to let us leave b/c he realized it was going sour and QUICK. I got up and grabbed the signature sheet then started crying and said “Yes! You have been nothing but RUDE and CONDESCENDING. Making a pregnant woman cry is VERY rude!” And we left. Hahaha. I was so mad I was pretty much shaking and my tears were pure anger. I’ve never been treated that way and I hope he looked like an idiot in front of the room full of other sales people and the people on their tours.

We got back to the room very ready for some fun! It was the fastest we’ve ever been out of a timeshare presentation so maybe it was worth the tears 😉 When we got back Kye, Mom and Mrs. Charlotte were so excited to greet us that they accidentally locked us all out!!! Zach and I ran to get another key and were semi-nervous that after our episode at the sales office that they would kick us out 😉

I mentioned in an earlier post that Mrs. Charlotte and Mom bought Kye a Nemo and a Mickey prior to the trip on sale at ToysRUs. Since he loved the Nemo show the day before, they decided to give him the Nemo that morning. I think it’s more fun to give him the presents after the fun event instead of before. He gets SO pumped about them! He LOVED Nemo and we allowed him to bring Nemo in the car with us to Chef Mickey (he had to leave him in the car though when we went in). 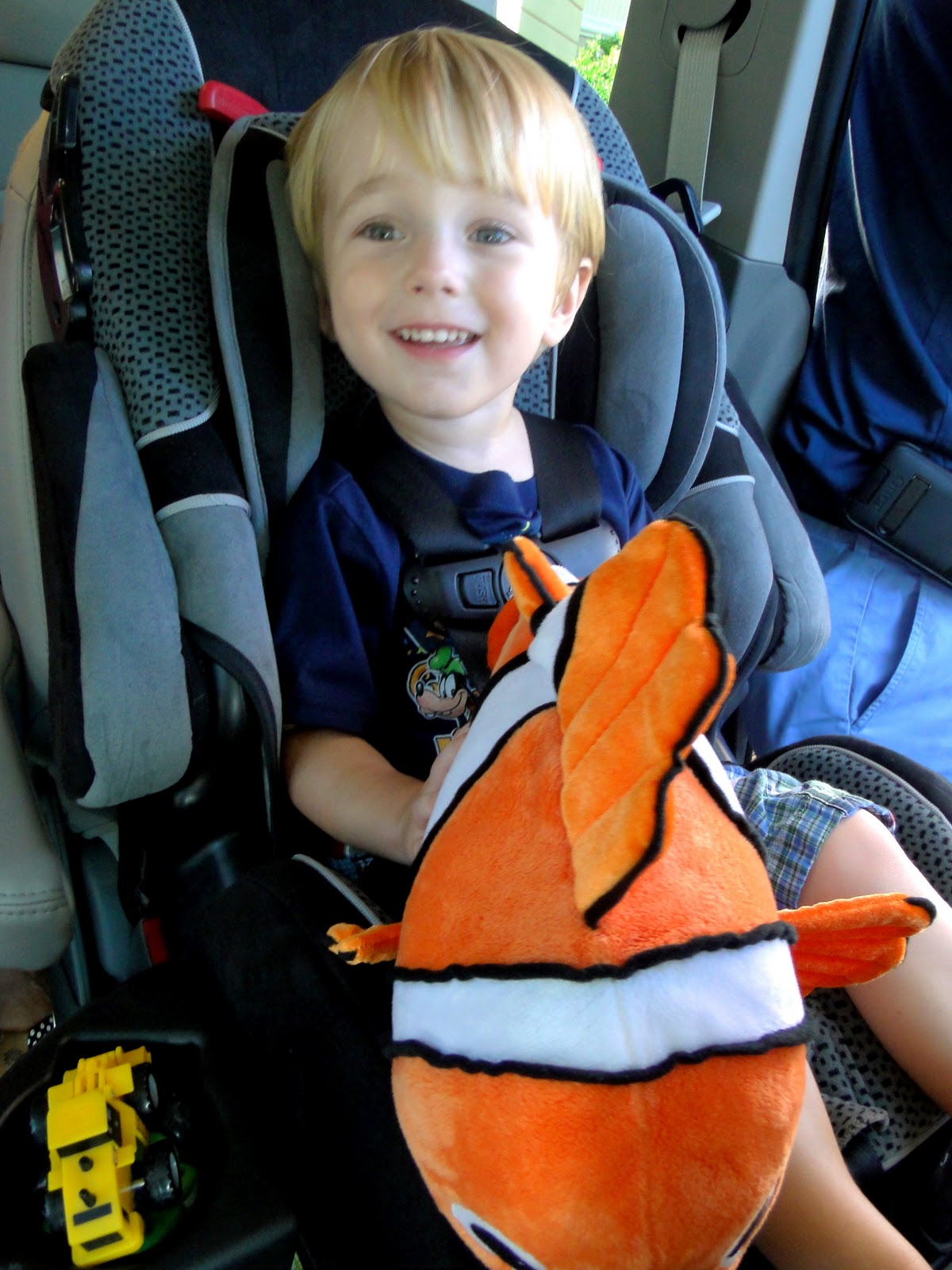 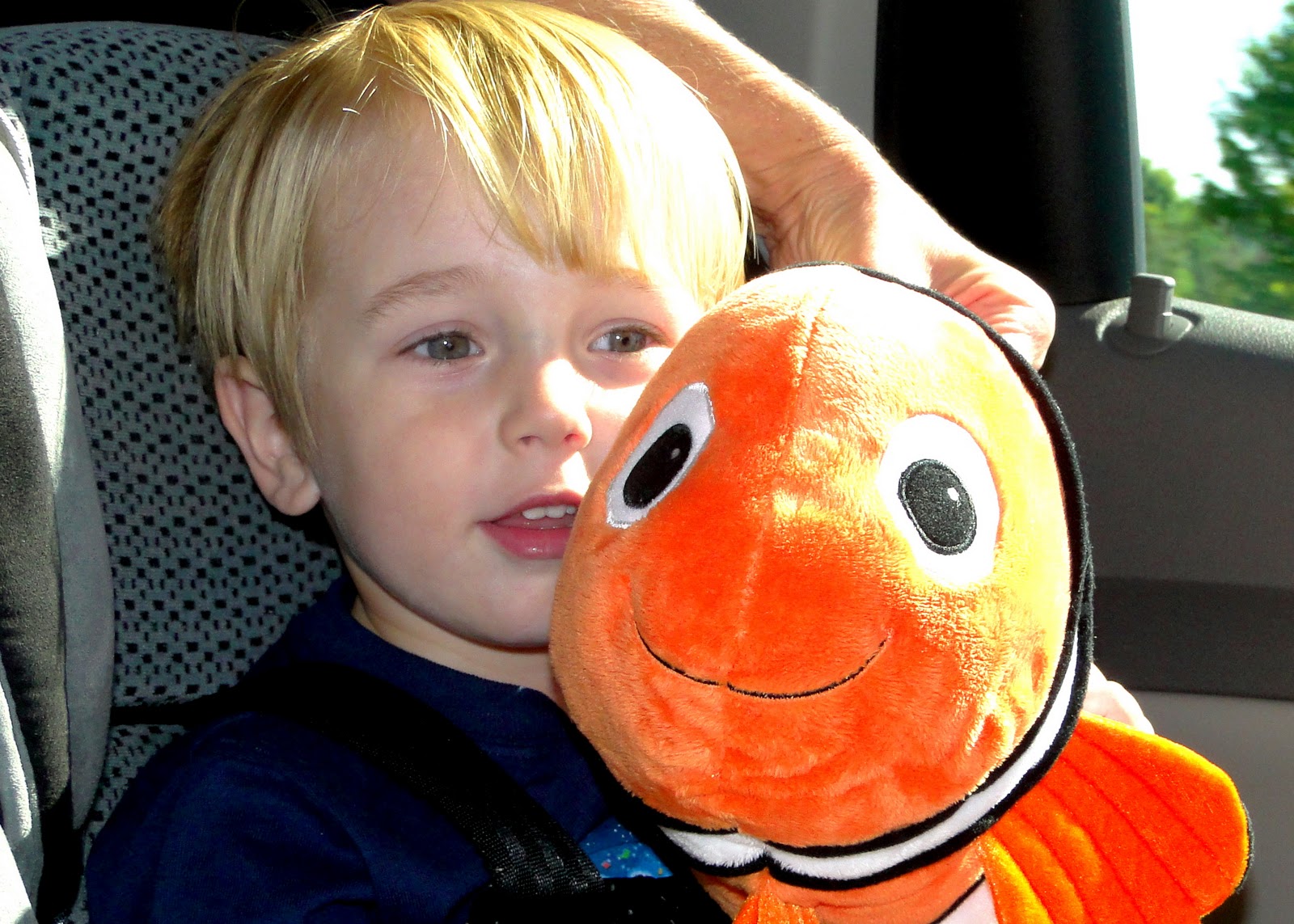 Chef Mickey is located at The Contemporary Resort. It was very easy to find and they staff there was so nice. We asked a guy when we walked in where to go and he said “Mickey’s been working hard for you guys and is excited to see you!” I LOVE when people get into stuff 😉 Makes the experience even better! I decided to book Chef Mickey because it’s a chance to see the most famous 5 characters: Mickey, Minnie, Donald, Pluto and Goofy. Kye has never seen any type of show or movie with them in it (I tried to let him watch some “I love Mickey” movie but it was mega lame) yet still knows who they are. I have bought him little characters and have several place mats with them on it. 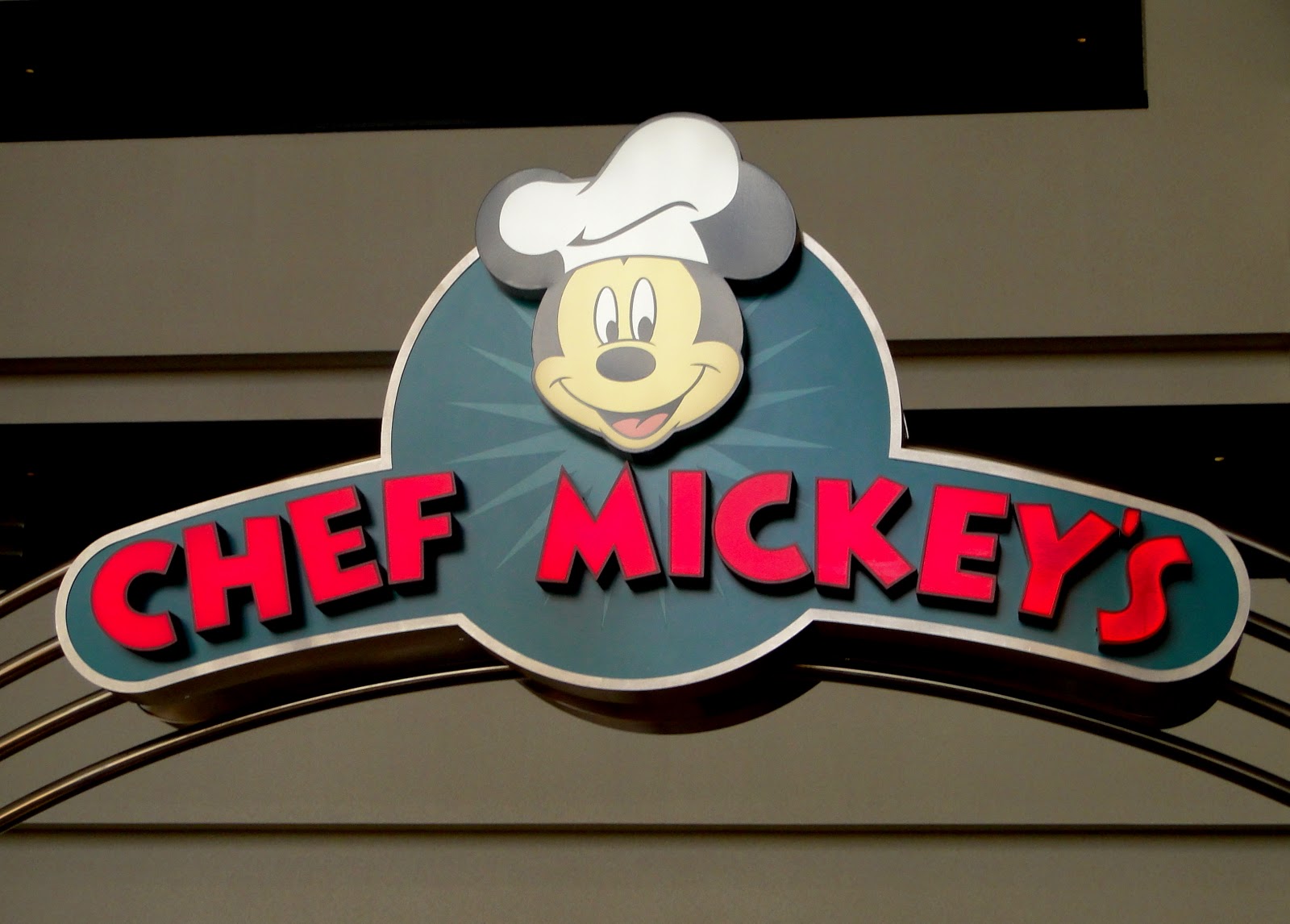 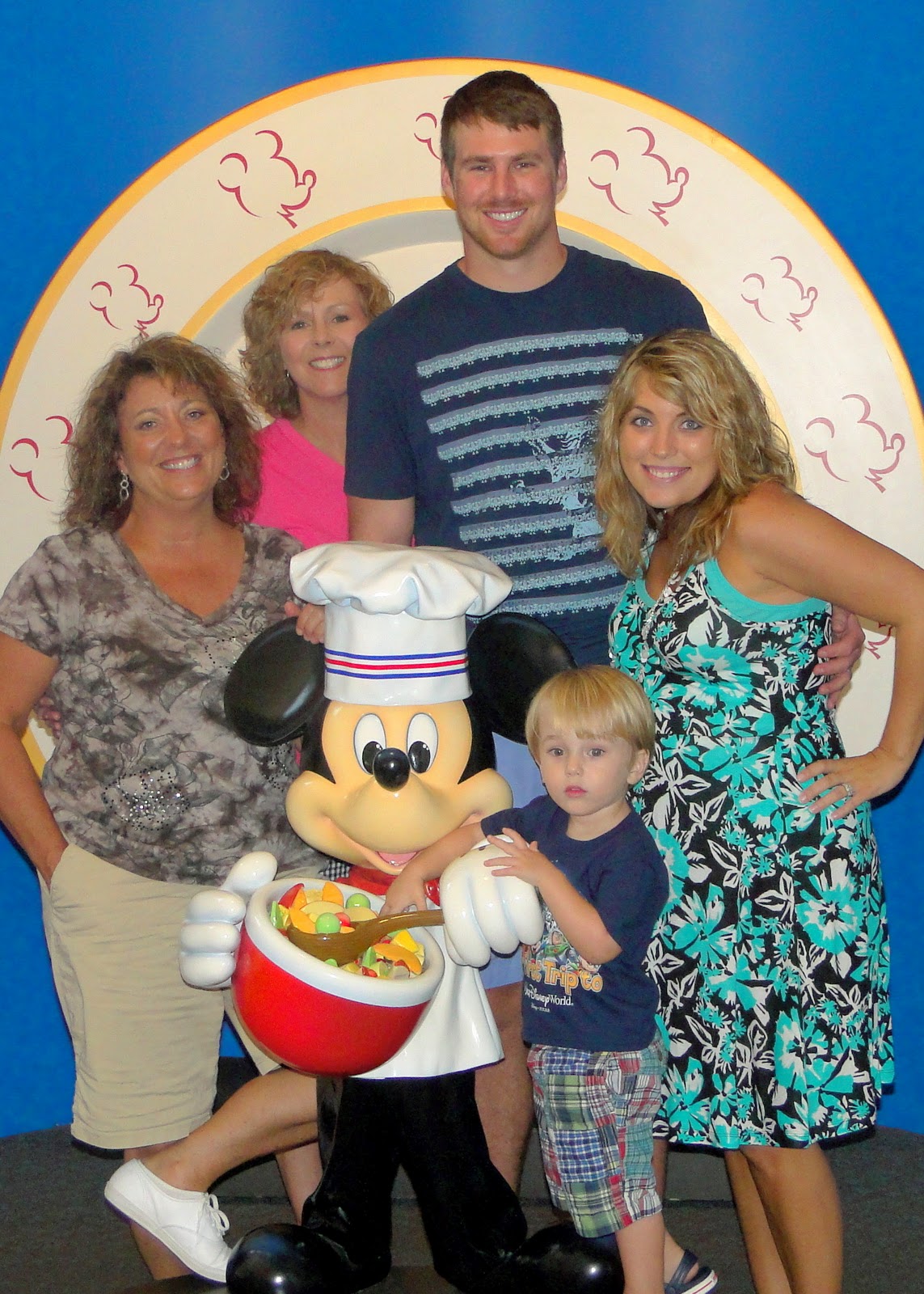 When I booked the meal the Disney site said that Chef Mickey cost from $15-$30 per person. It’s an all-you-can-eat buffet and they offer it for breakfast, lunch, or dinner. I wasn’t sure how much the breakfast would cost (since our time was prior to 11:30 we got breakfast) but I figured it’d be the $15 per person since breakfast is the cheapest meal of the day right?!?! I told Zach that morning that I was nervous about how much it’d cost. His response? “It’s worth it!” Um…is this my husband talking?!?!?

I remember attending character meals (we always did the breakfasts then too!) as a kid and don’t remember them being quite as crazy as this was…but it was a FUN crazy! Super laid back, loud, and just very kid friendly. You didn’t feel rushed one bit and the characters filtered through the entire time. We happened to sit down just as they were all making their rounds so we waited to eat for a little while.

First up was Goofy! 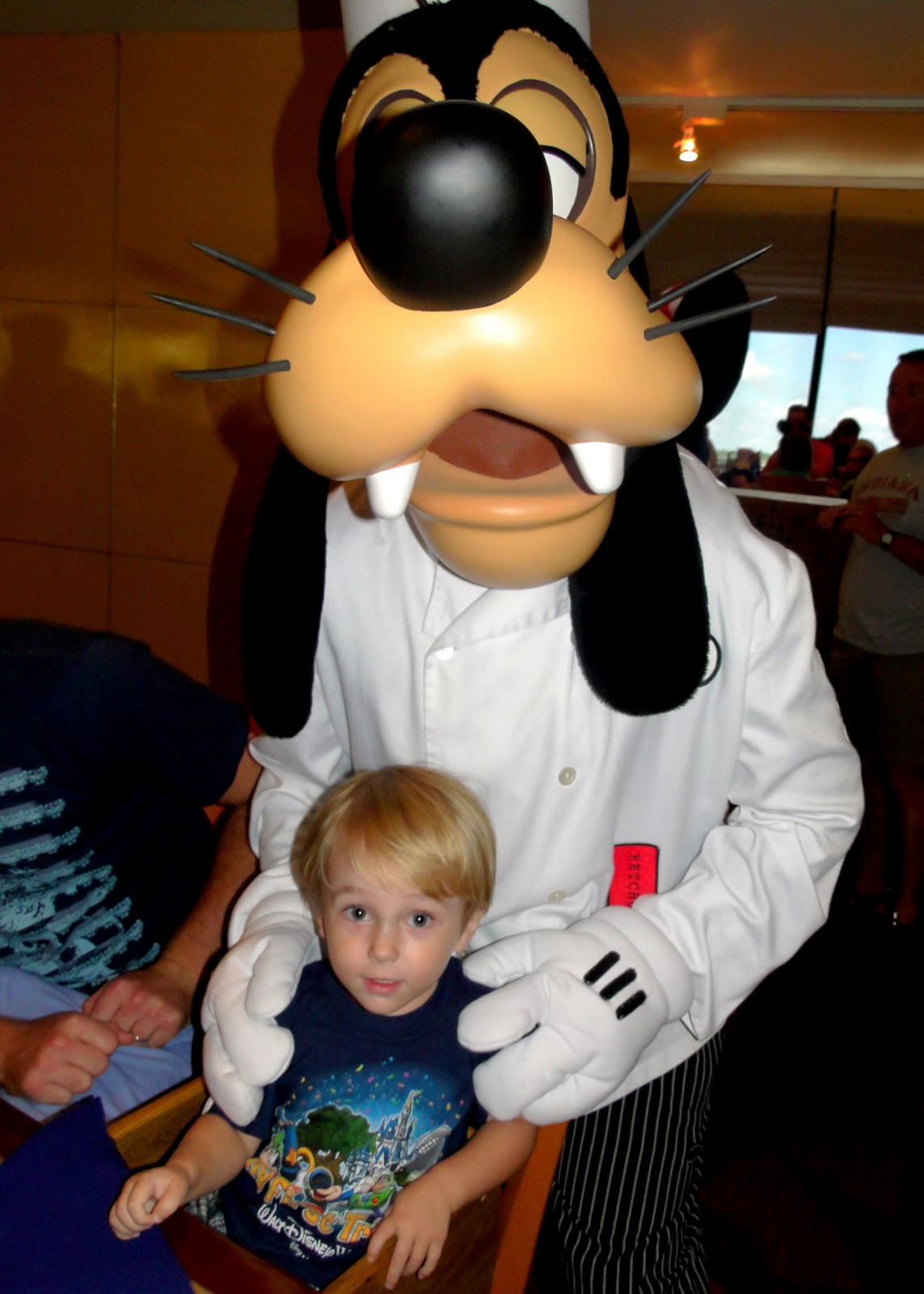 You can’t even see Kye under that big kiss! 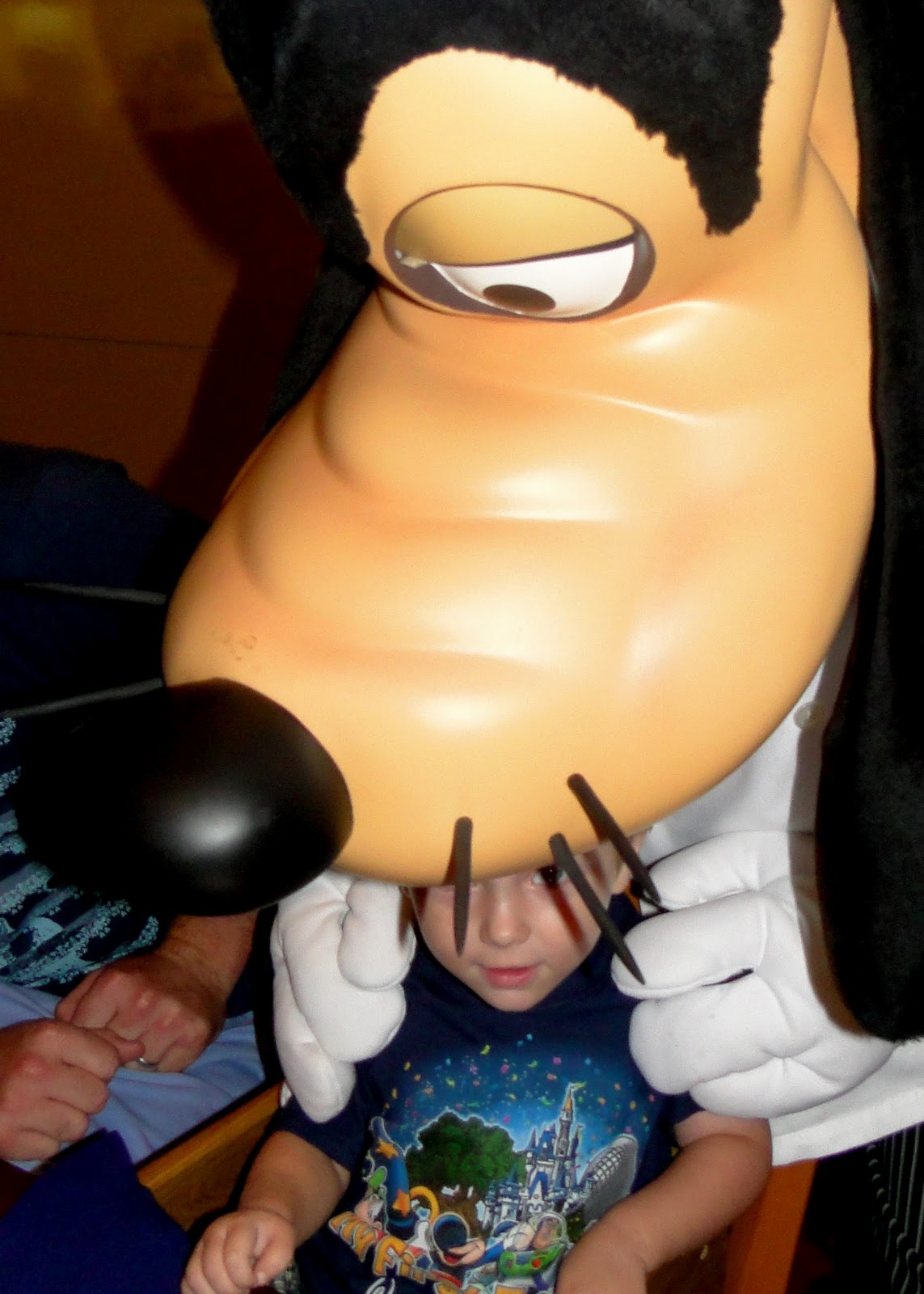 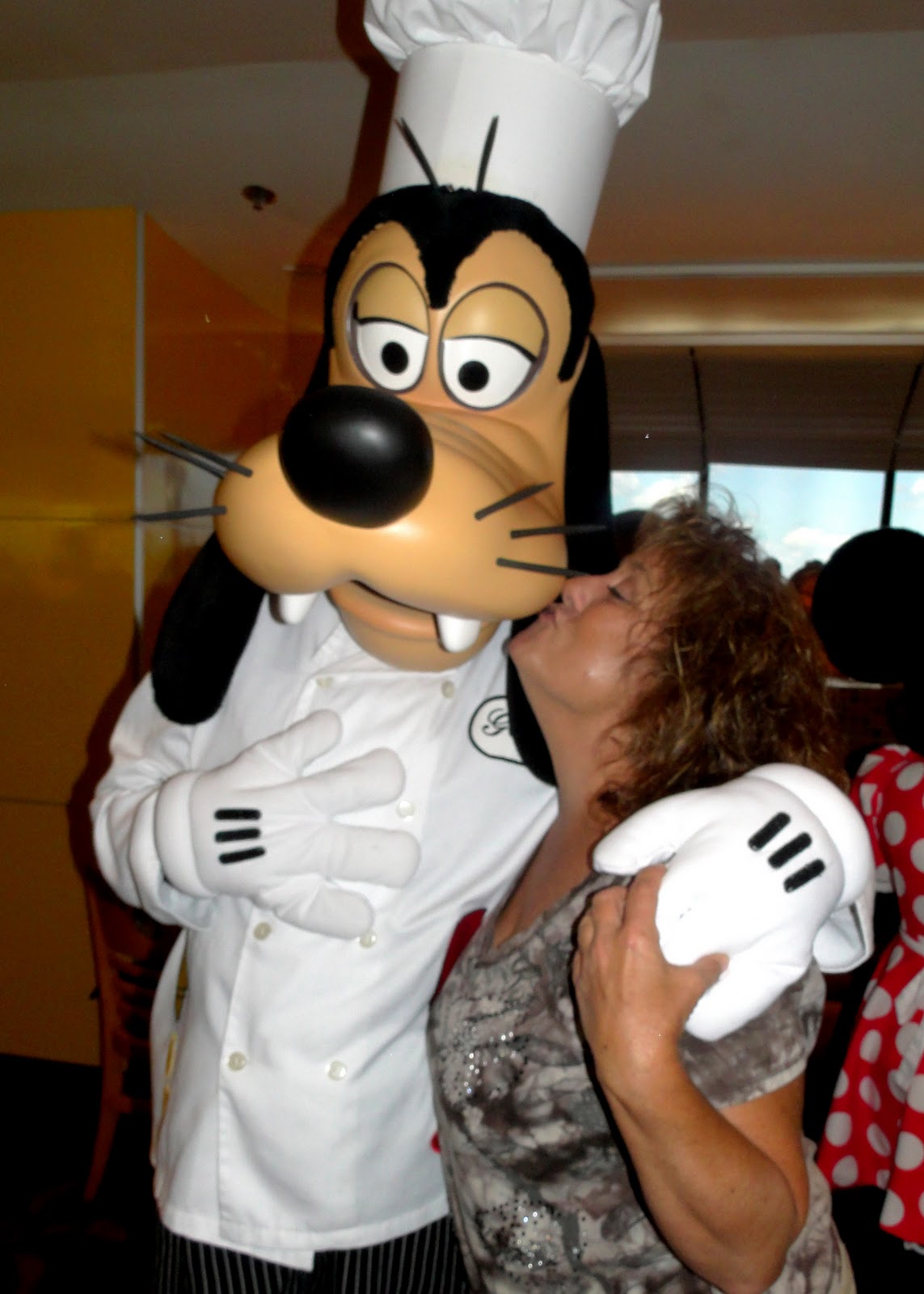 Kye said that Goofy was his favorite as well so we took extra time with him. The characters were AWESOME about staying at your table for long enough to interact with them and get as many pictures as you wanted. SO much better than the rushed feeling you have when you wait in the actual lines at the parks. 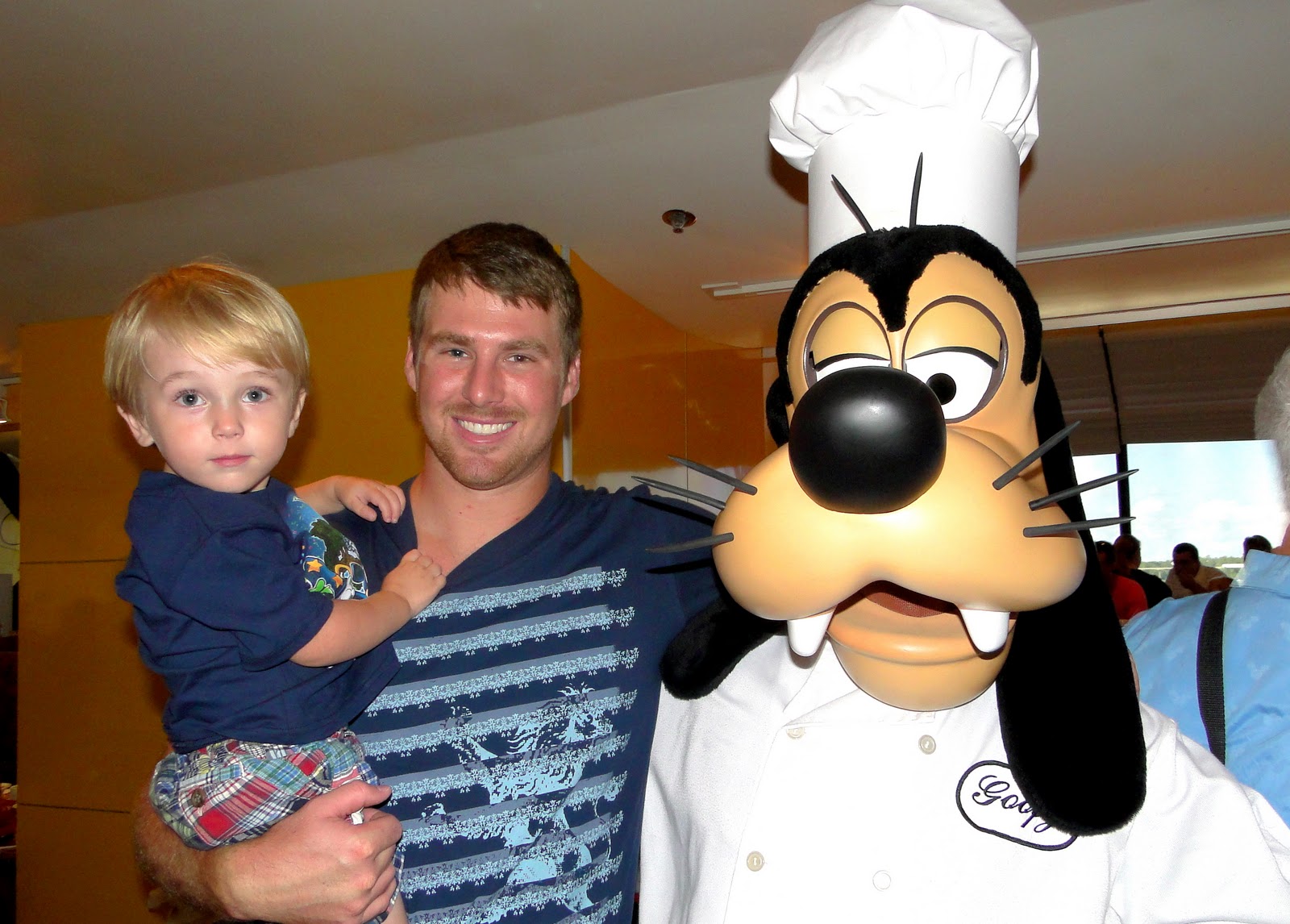 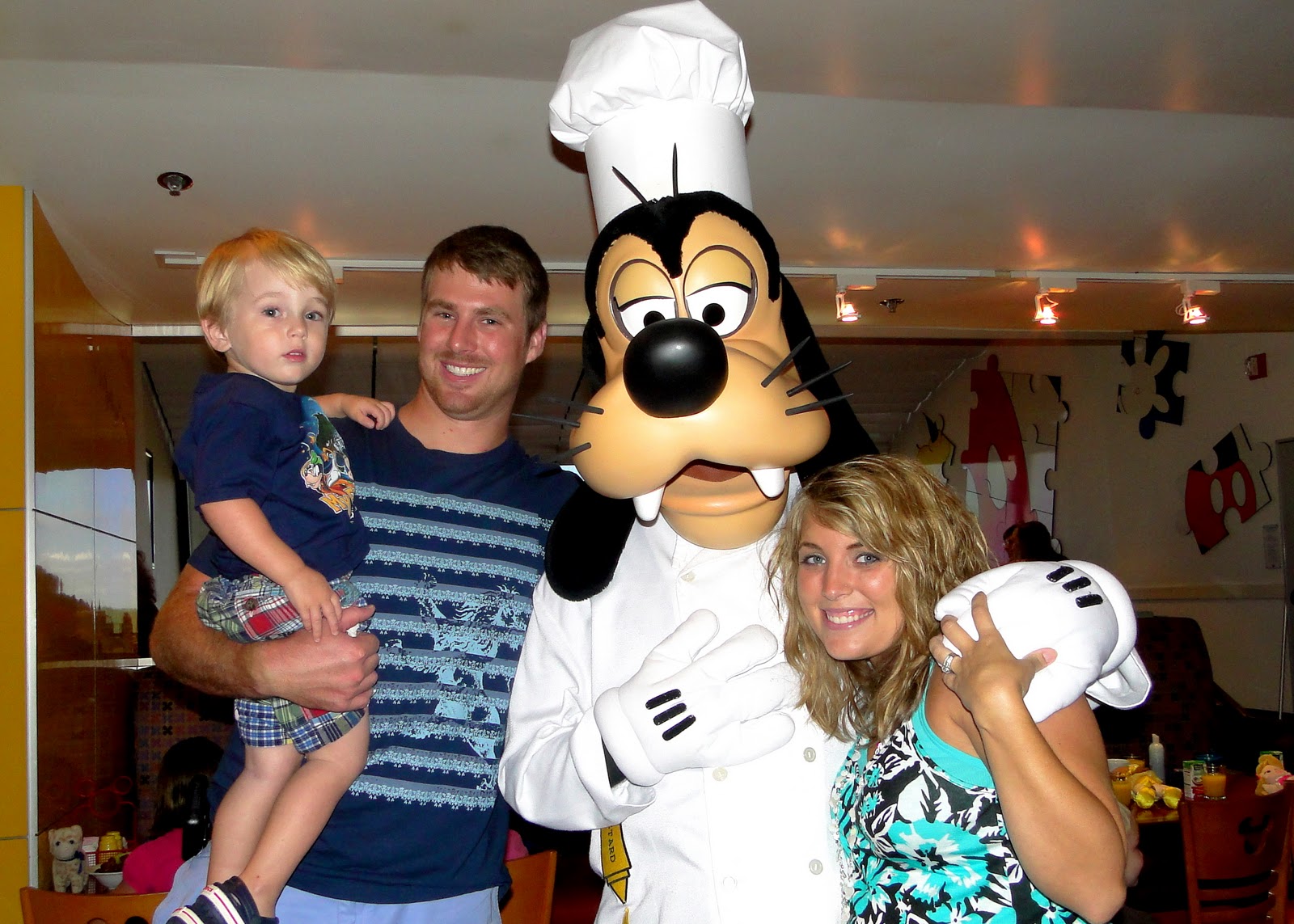 Mom got a little emotional when Minnie came around to our table. Seeing all the little girls with Minnie just reminder her of when I was a little girl. Another reason I’m SO glad Kye’s grandmas were able to come with us. THEY got to relive magical moments from their pasts too while experiencing all of Kye’s for the first time!

Kye was pretty shy with Minnie! 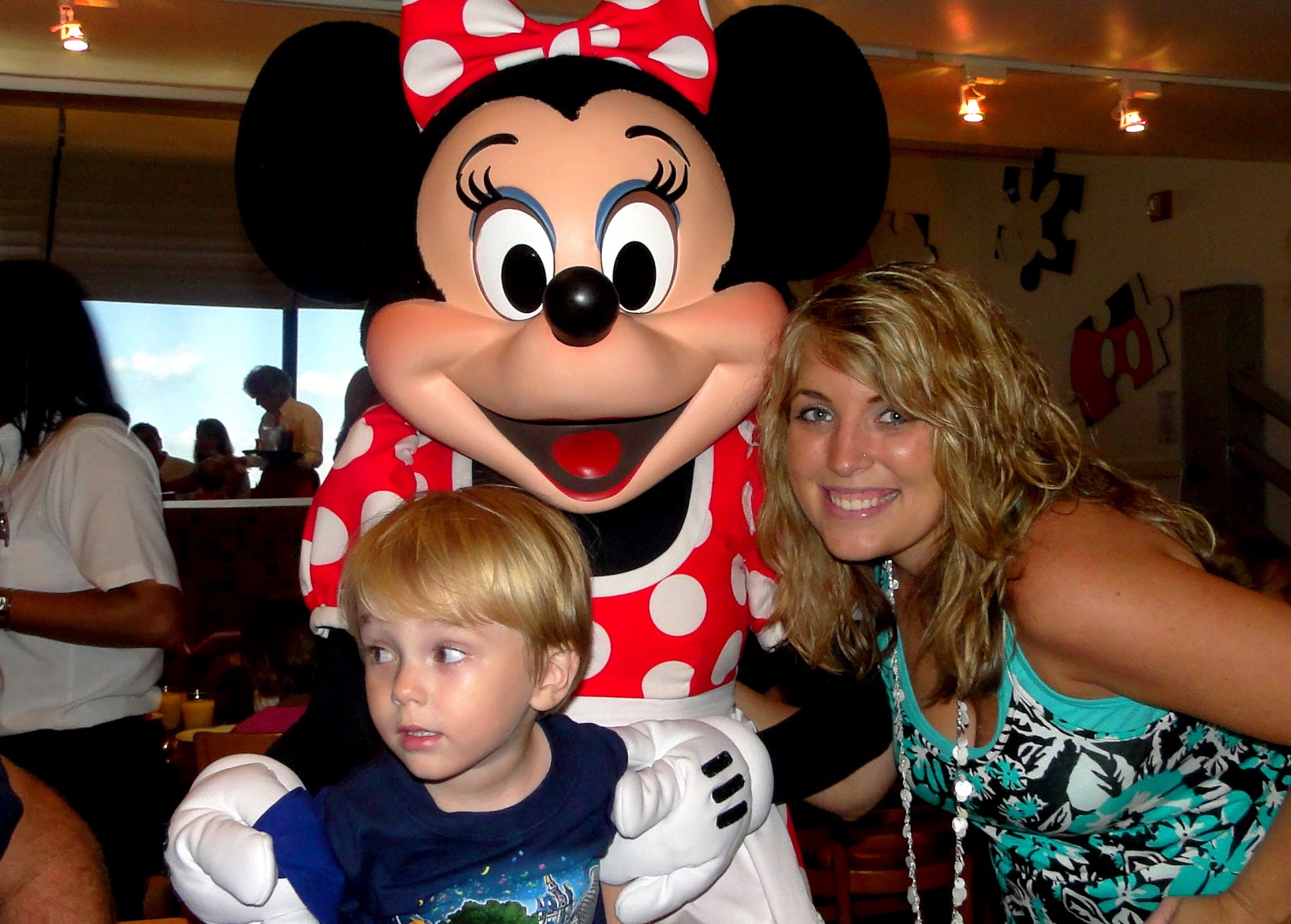 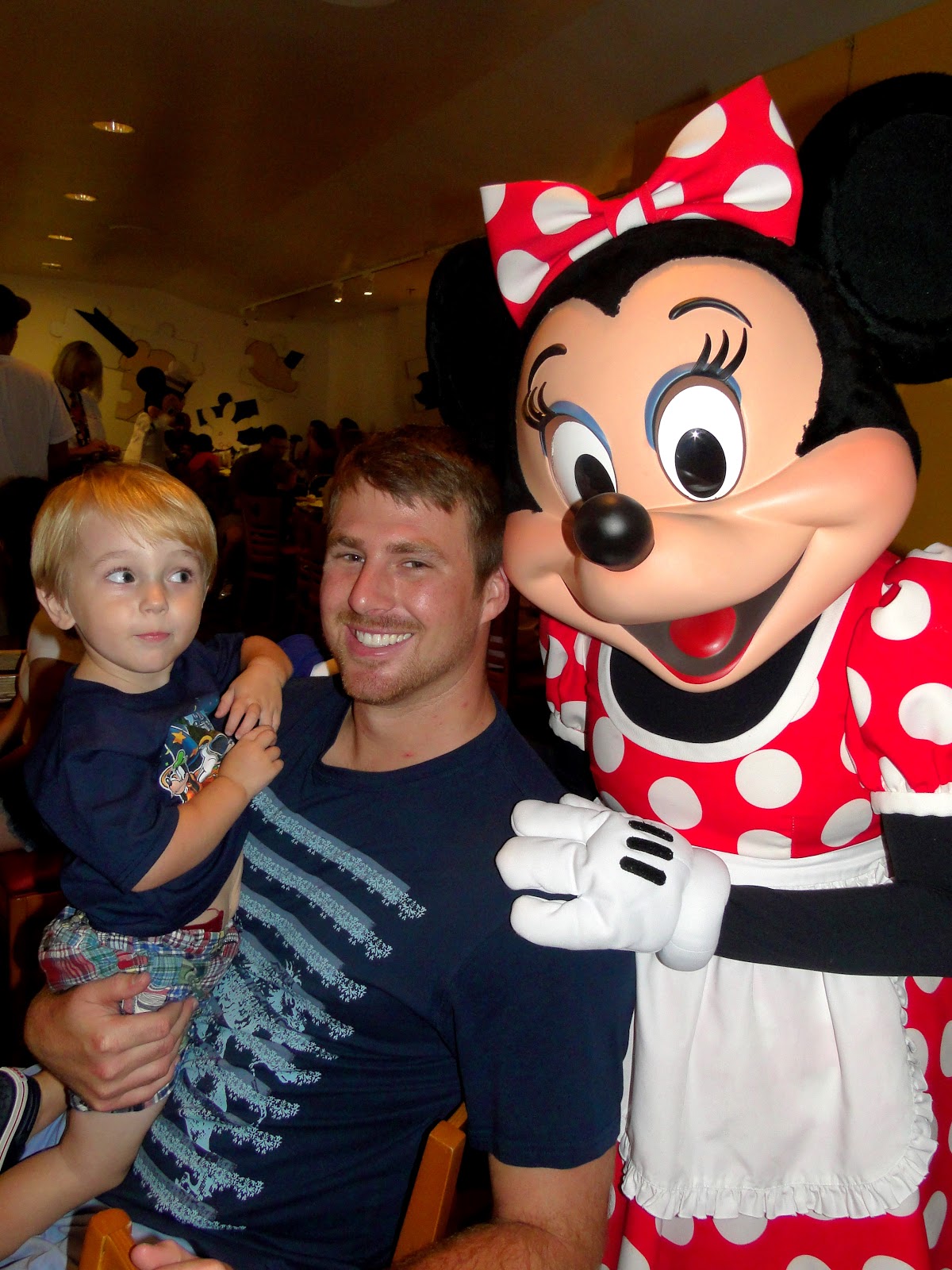 giving her some kisses 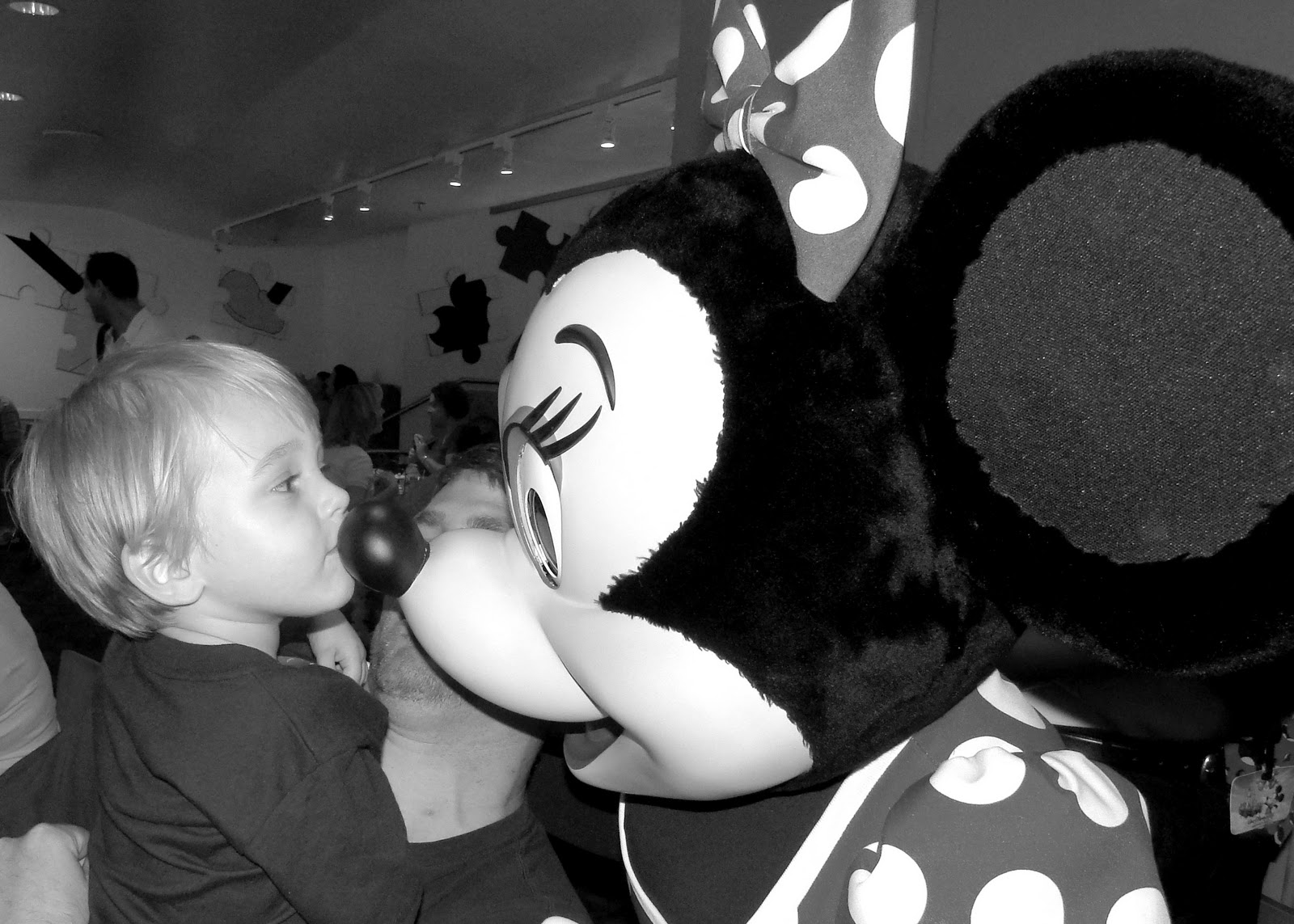 It was VERY exciting to meet Mickey and we made a big deal about it! However, I was a little disappointed that he was in a dumb chef’s outfit. I was hoping for the authentic Mickey we all know and love ya know? I wonder if Mickey is at any of the other meals dressed differently? It didn’t take away from the special moment though! 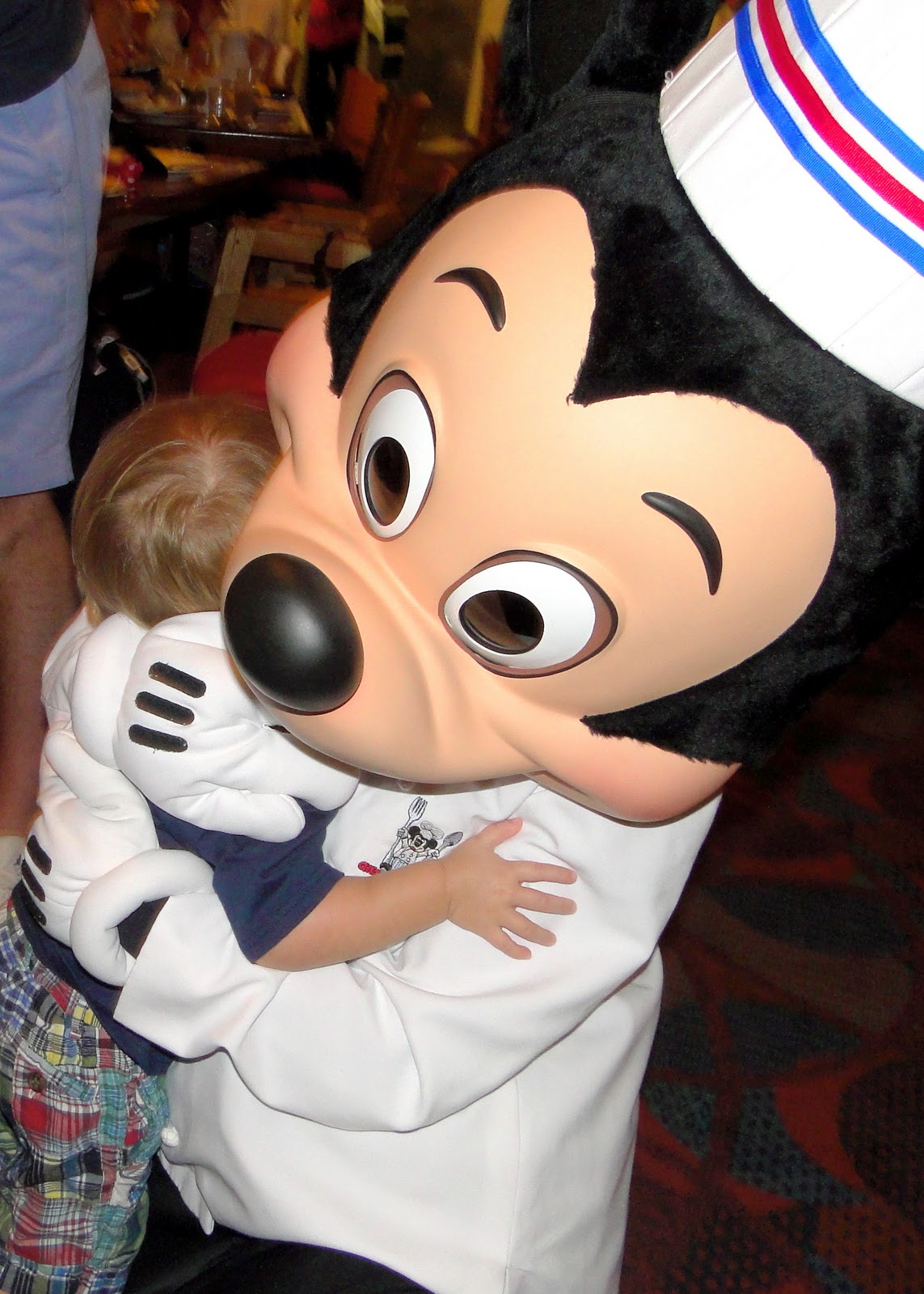 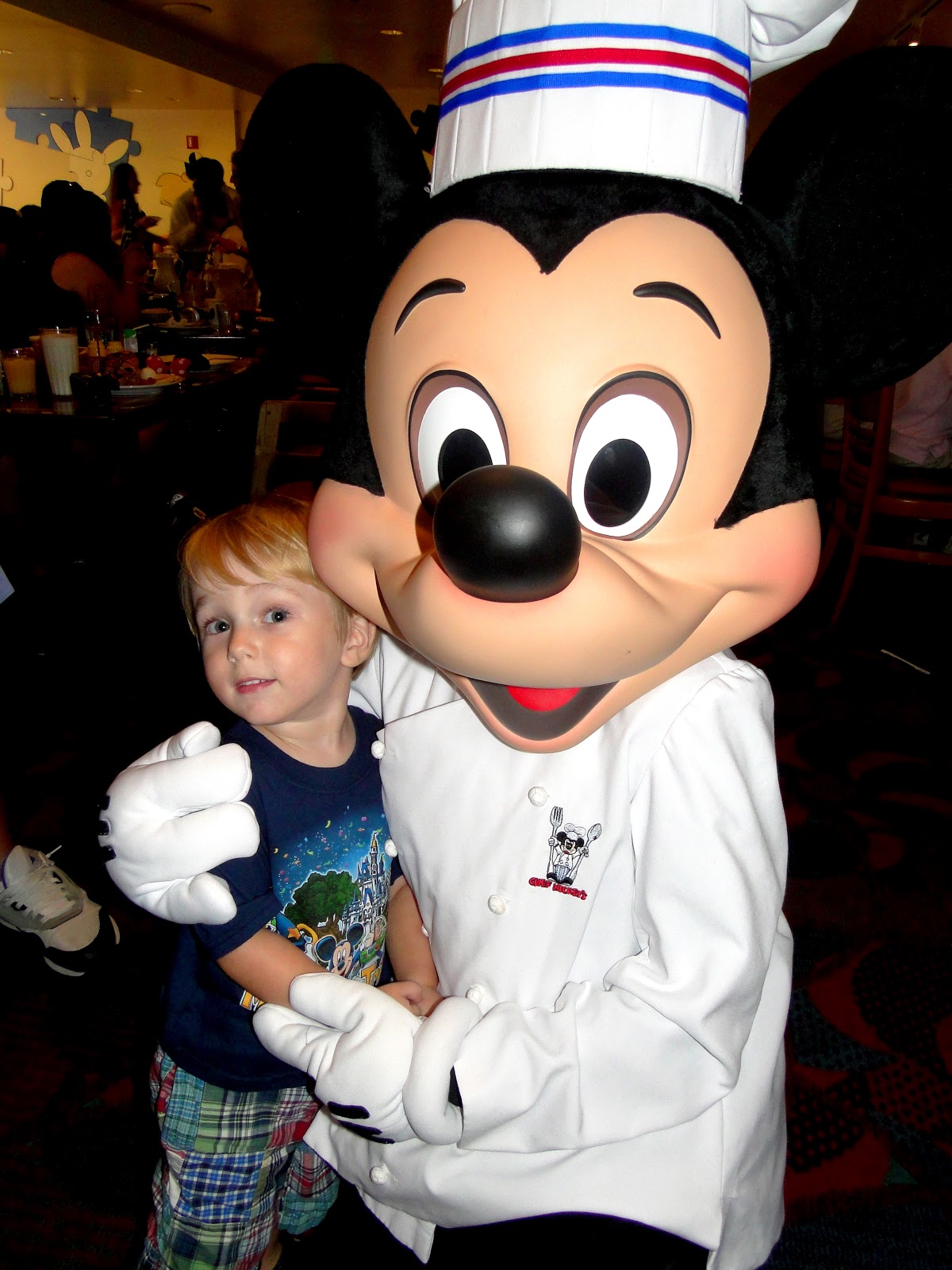 Kye’s wearing the new shirt I bought him on the first night there. It says “My First Disney Trip!” I originally planned for him to wear another Mickey shirt I made myself…but Daddy didn’t approve of it. His new shirt had Mickey on it and I thought it was appropriate for the occasion!

We couldn’t get over this cute look he kept doing! Like he couldn’t believe who he was getting to see! 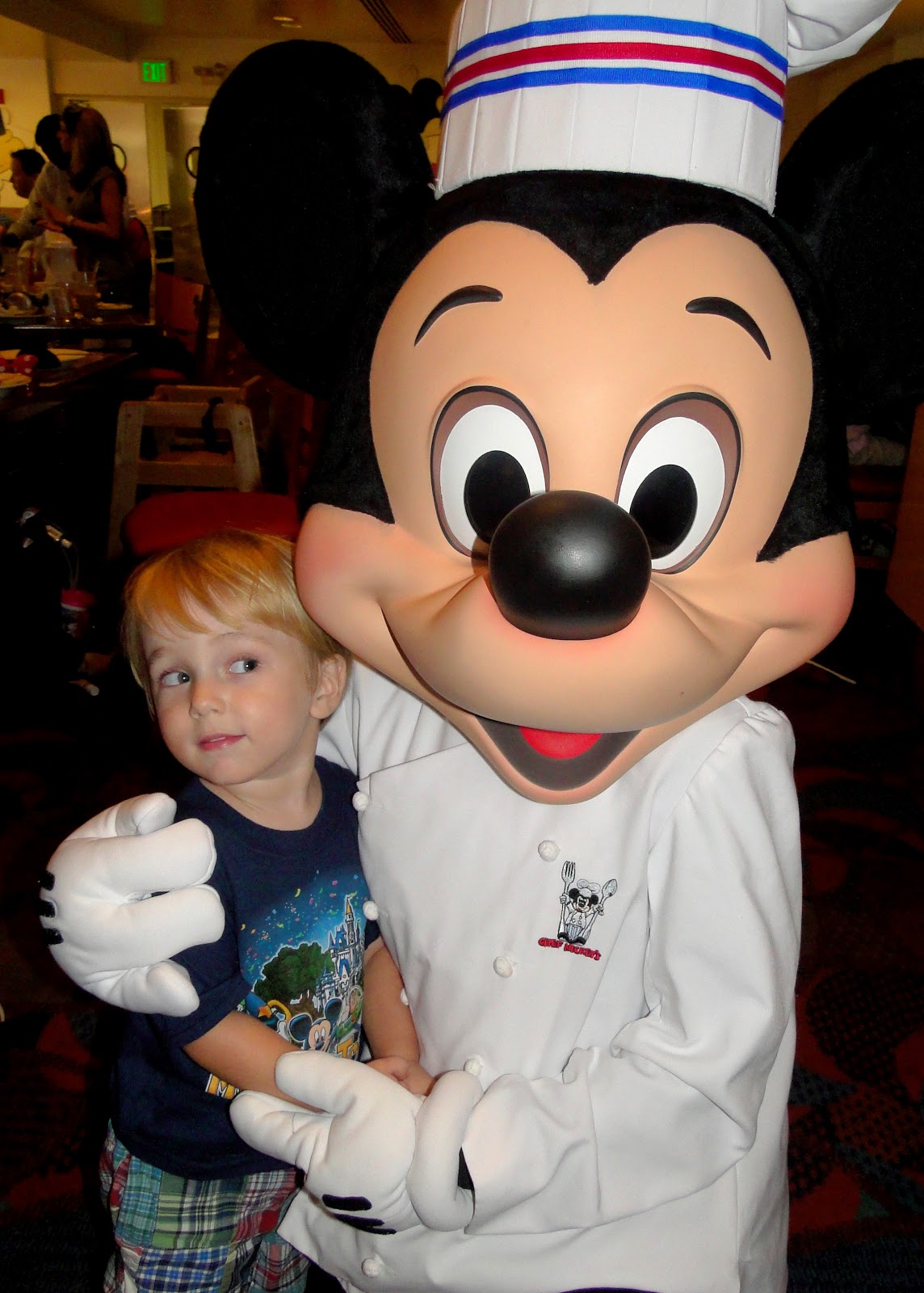 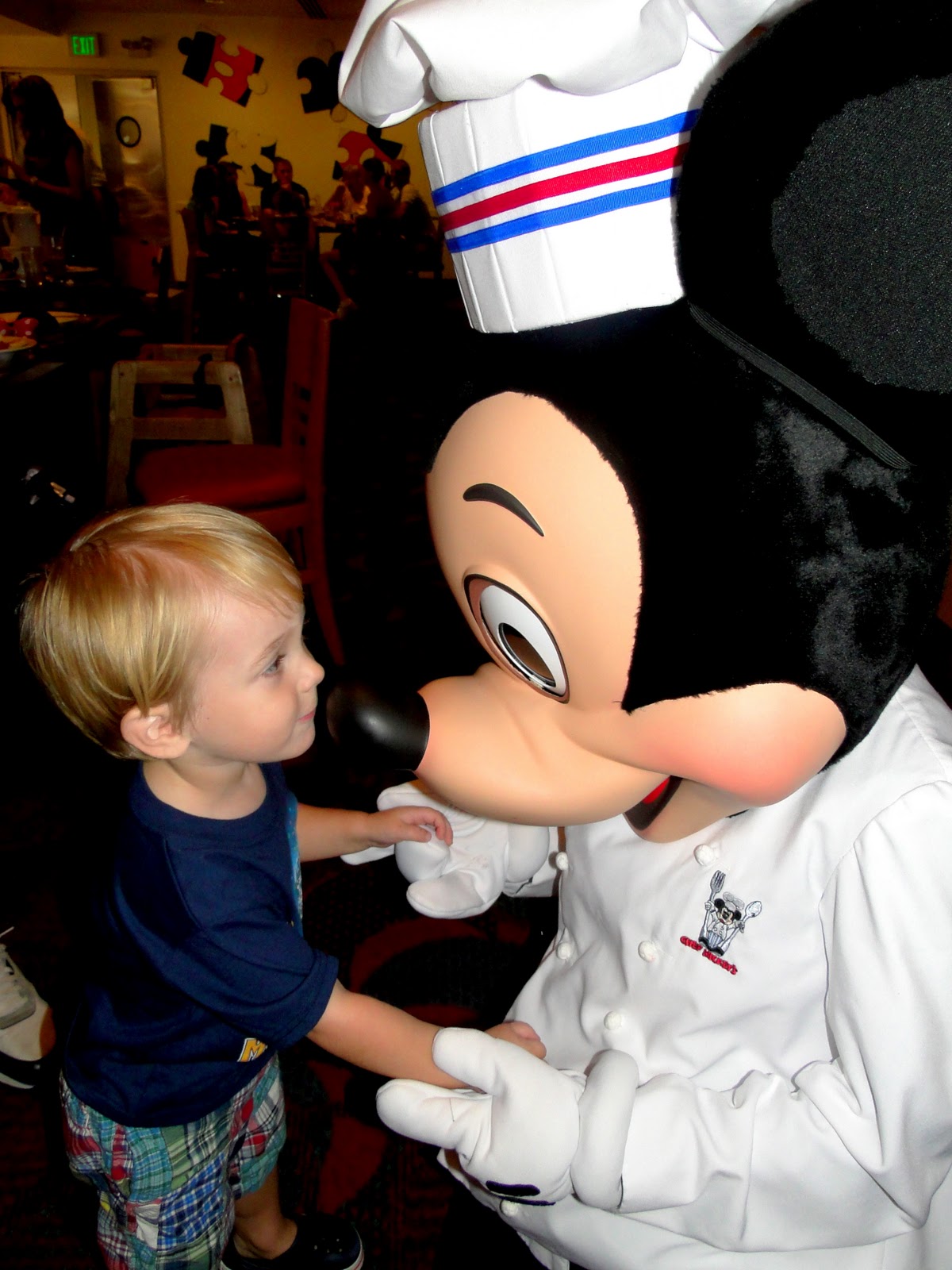 HAD to have a family picture with Mickey! 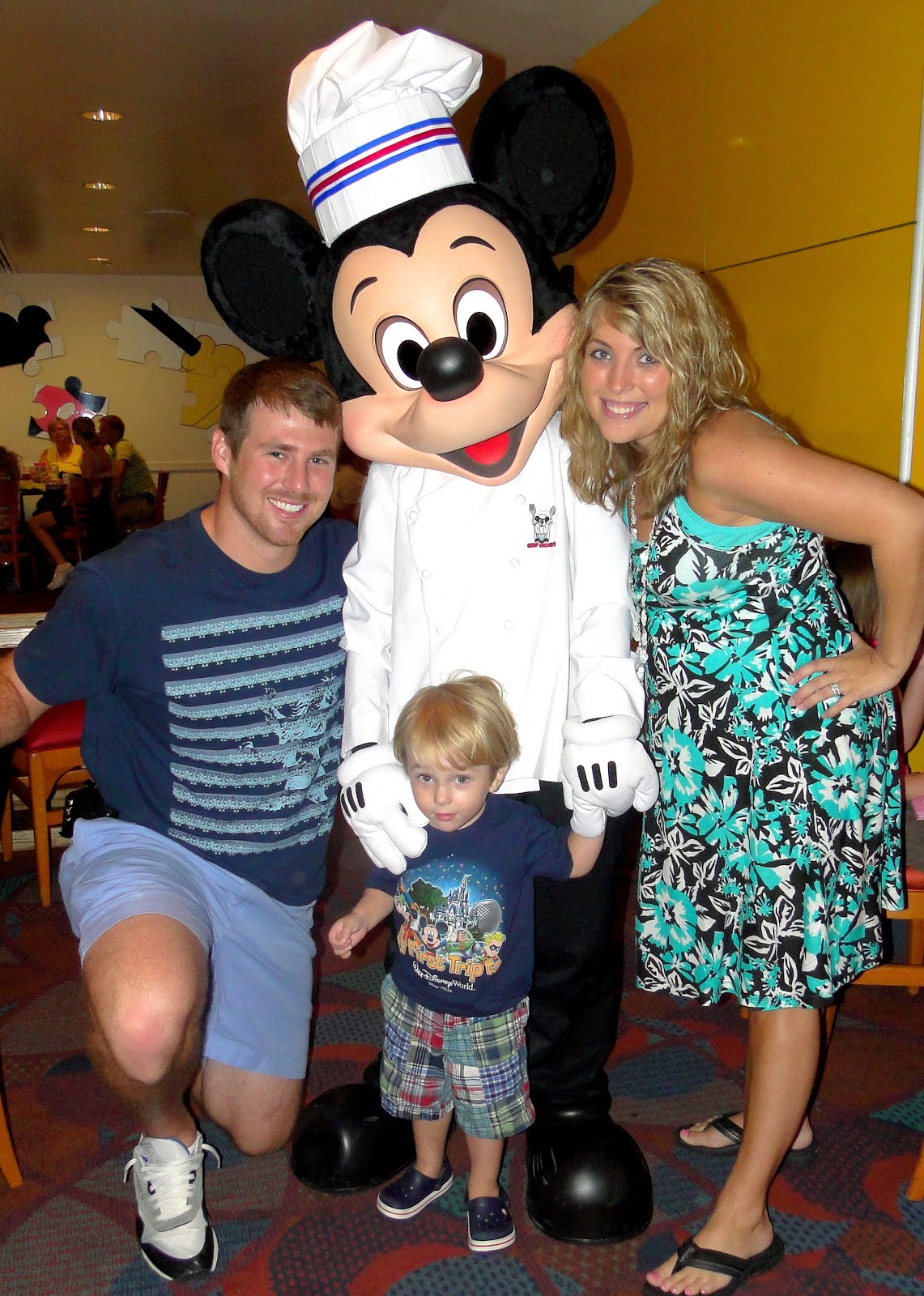 I promise, Mom is back there 😉 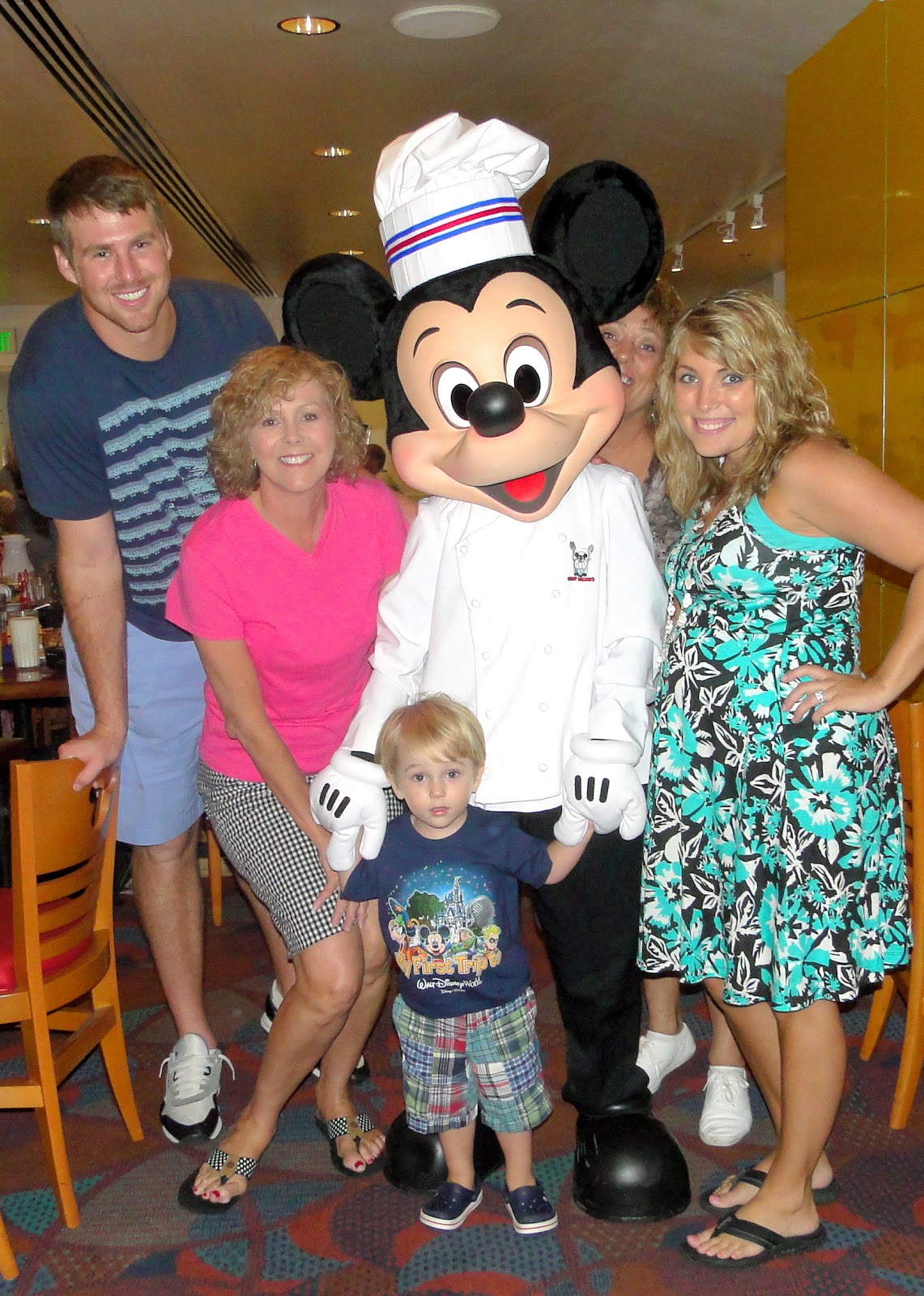 At this point Kye was pretty hungry. We gave him a very light breakfast that morning and it was practically lunch time so he was READY. It was really great how they let you go and eat whenever you wanted and a waitress came by to refill drinks constantly. They gave us any drinks we wanted and it was nice to not have to pack anything. I even forgot to pack a bib and just didn’t worry about it! They had milk and everything else we could have desired! 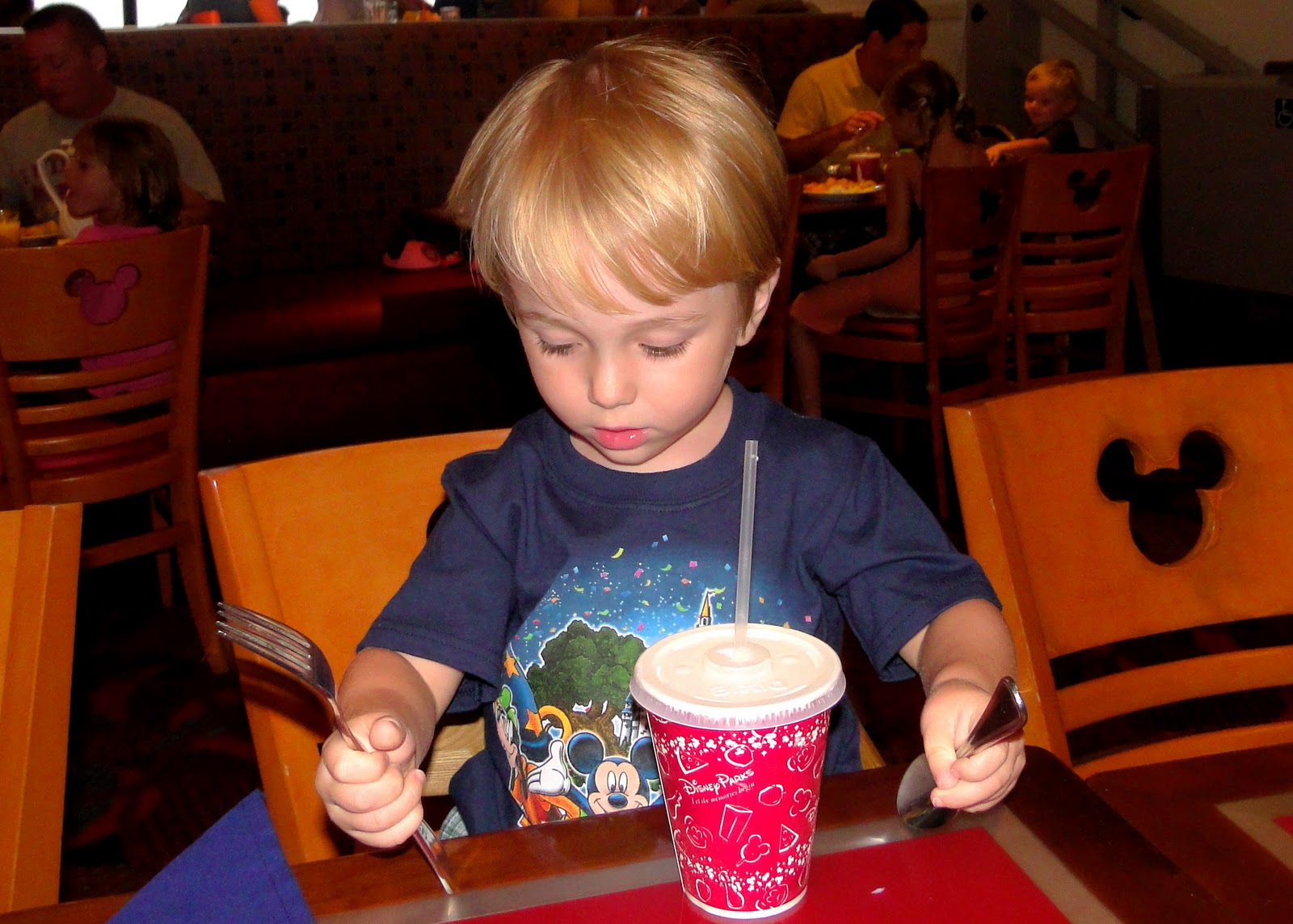 The food was SO good. It was a HUGE breakfast buffet with literally everything you could possibly want. We all went back more than once! Kye enjoyed the Mickey Mouse waffles 😉 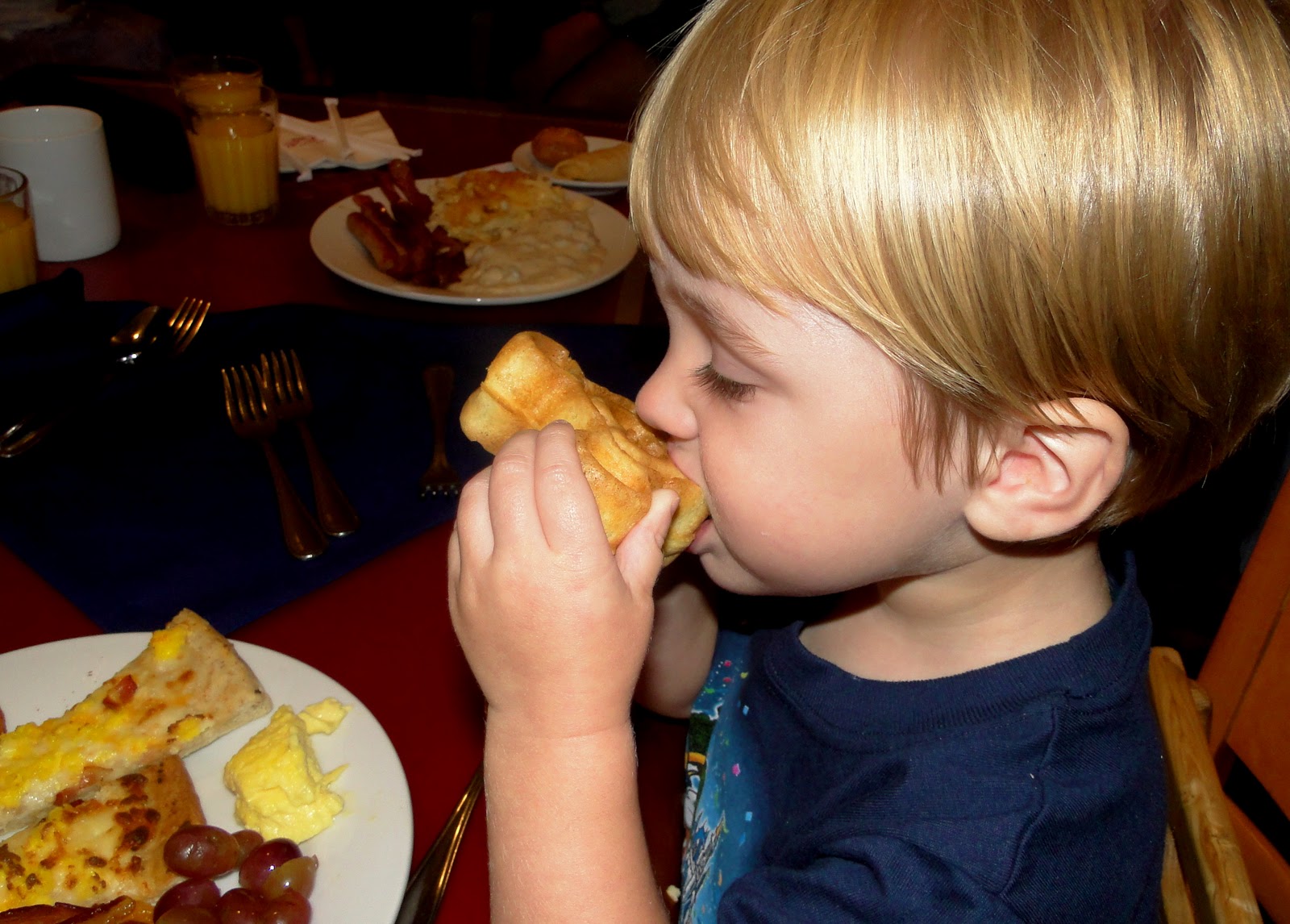 Poor Pluto came by just as Kye had gotten his food and he wanted nothing to do with anything unless he could EAT IT! 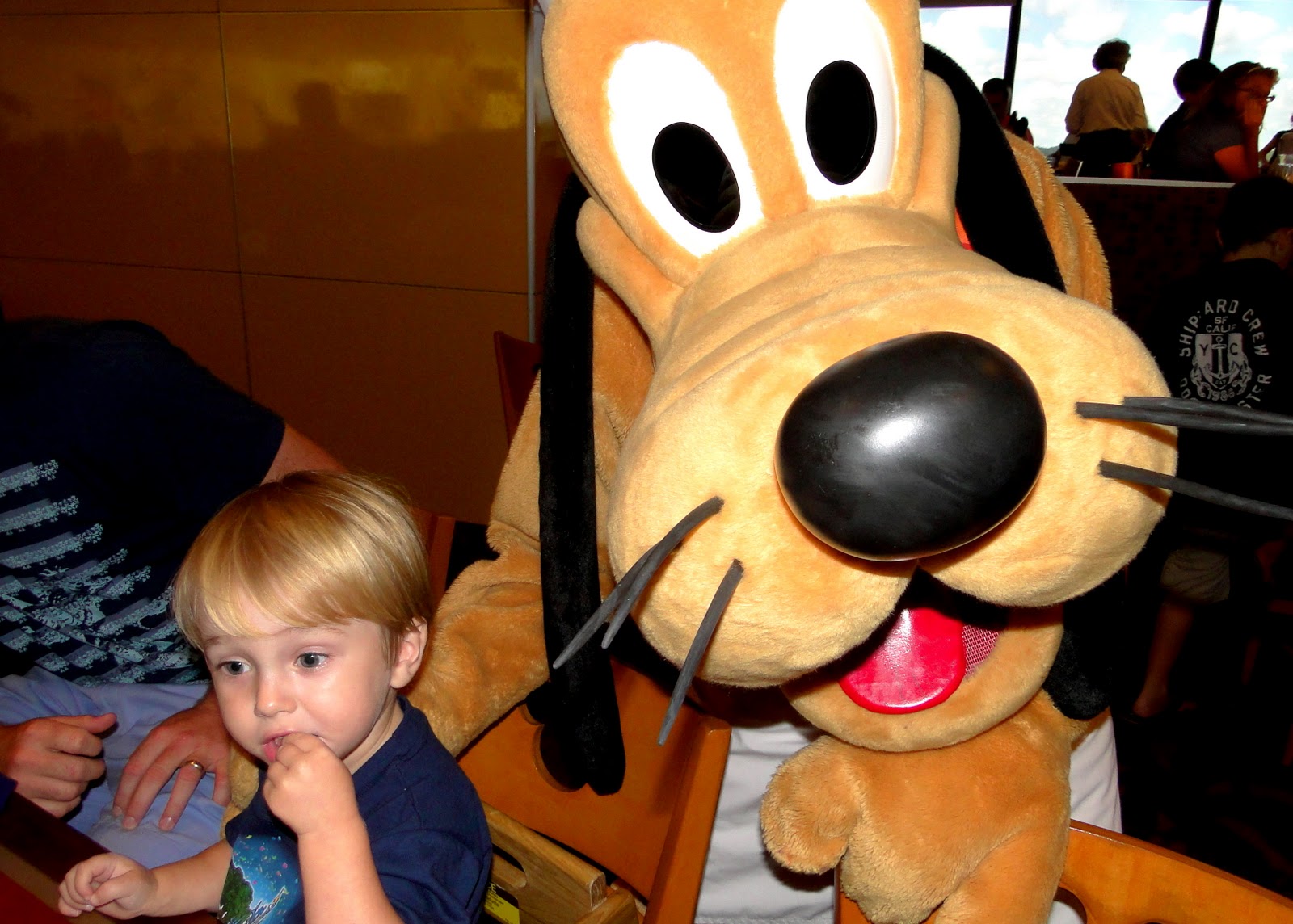 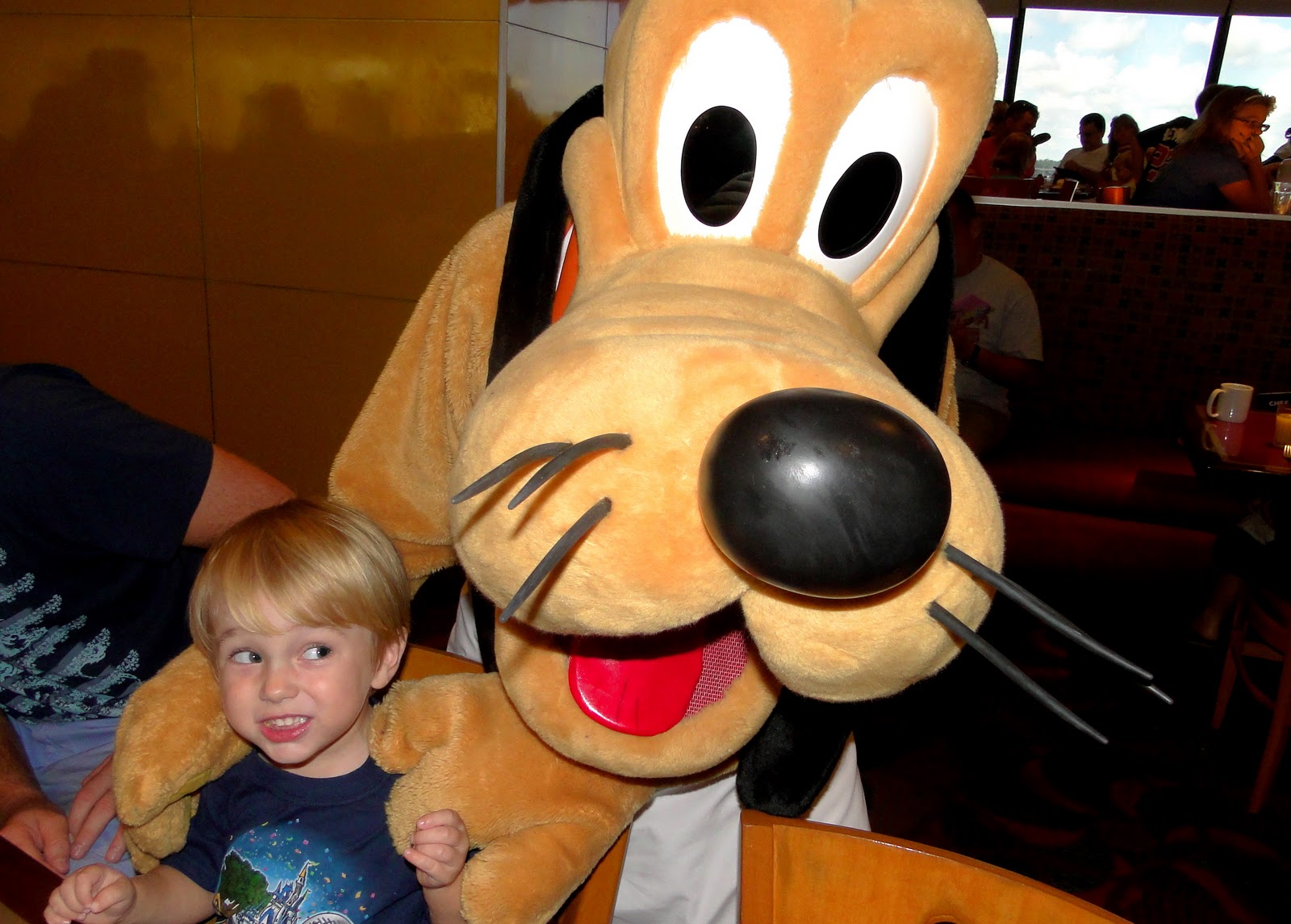 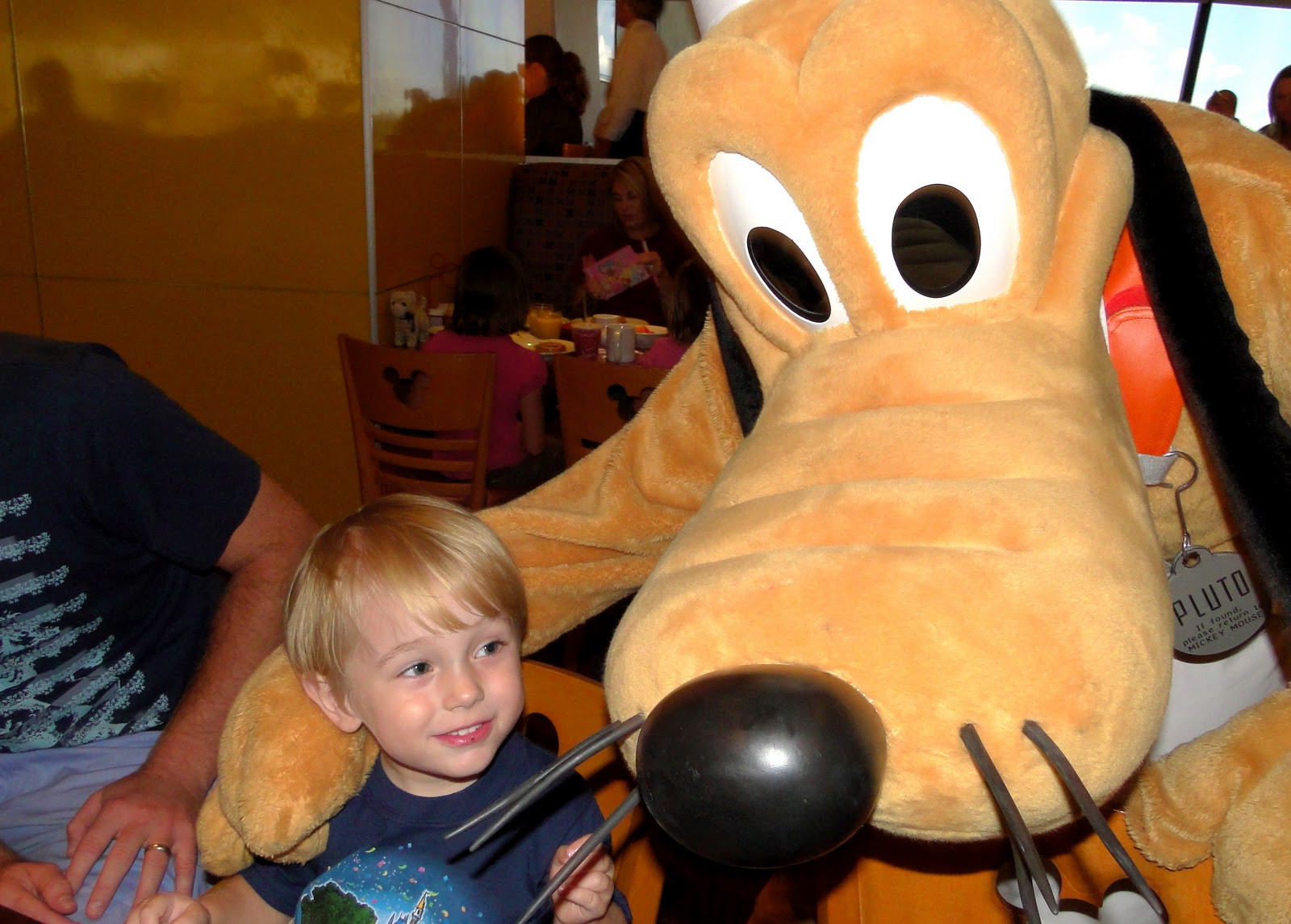 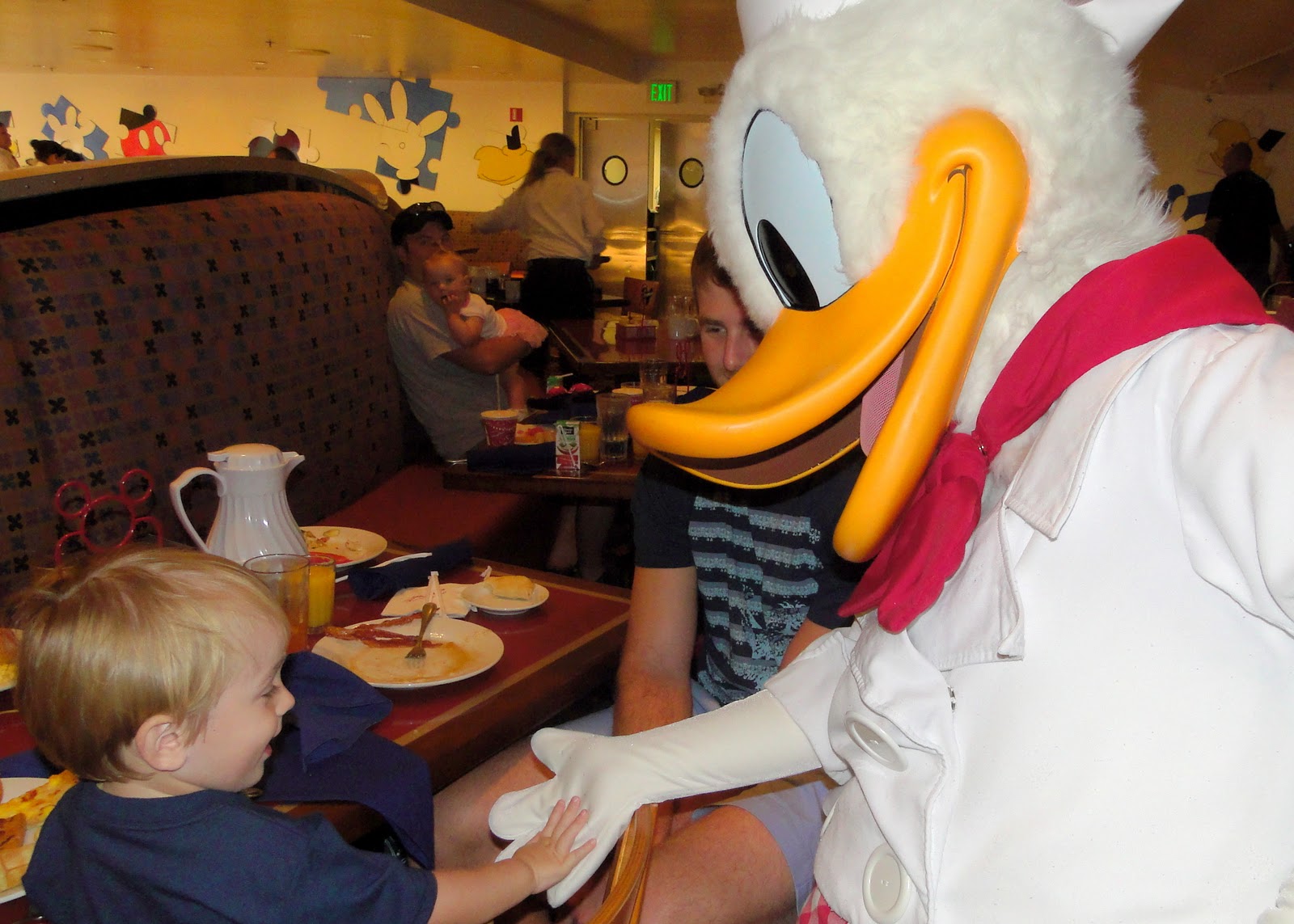 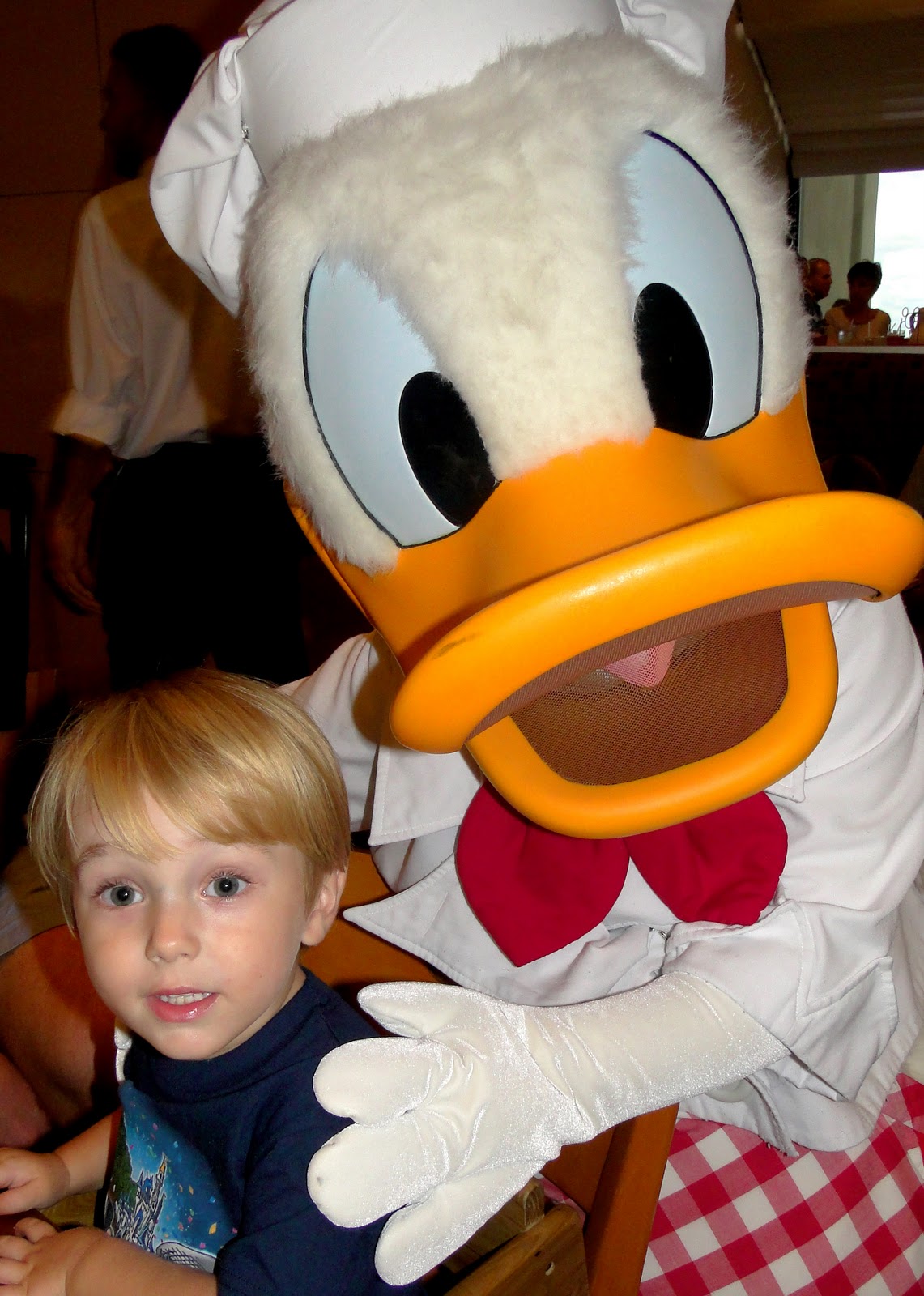 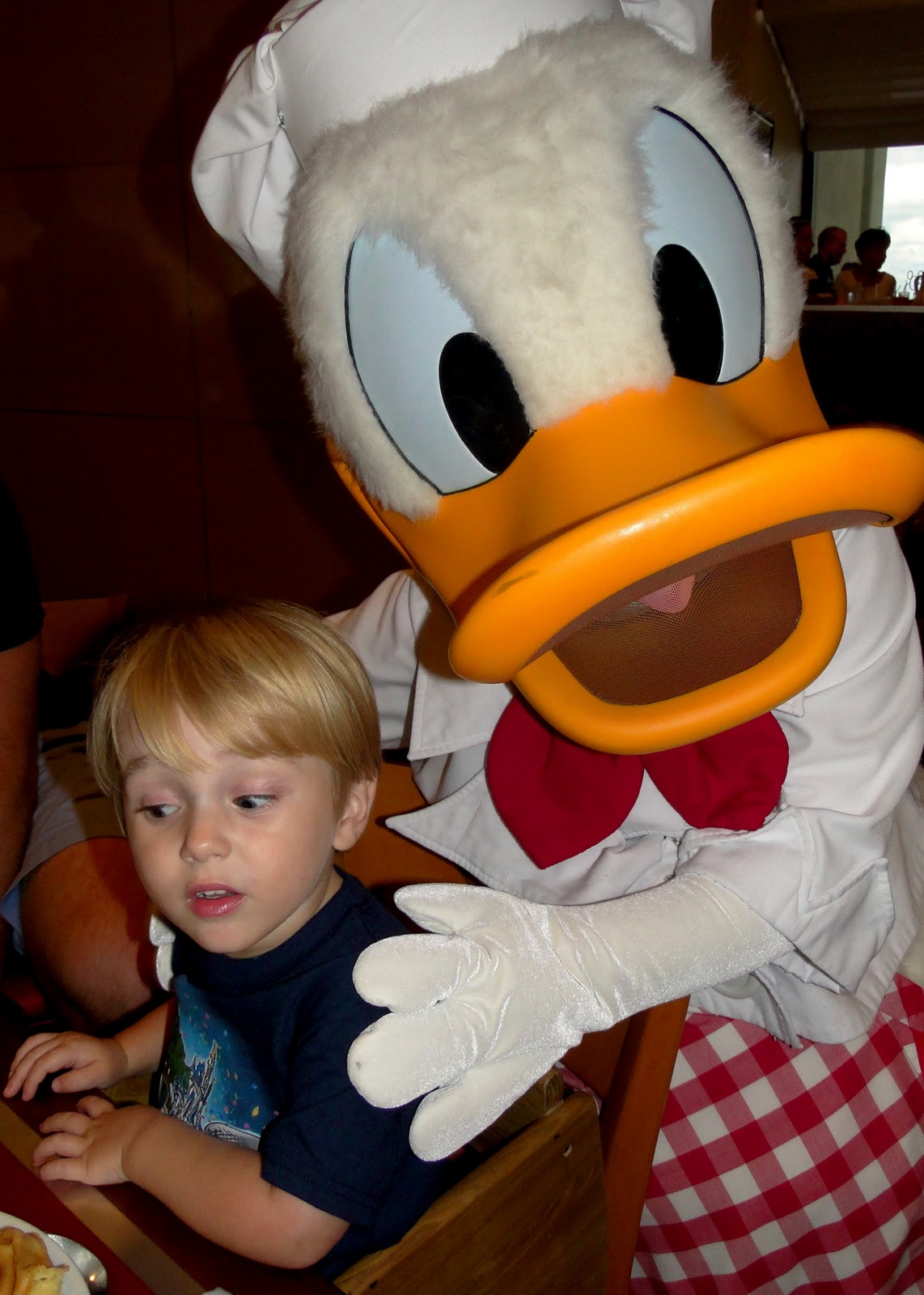 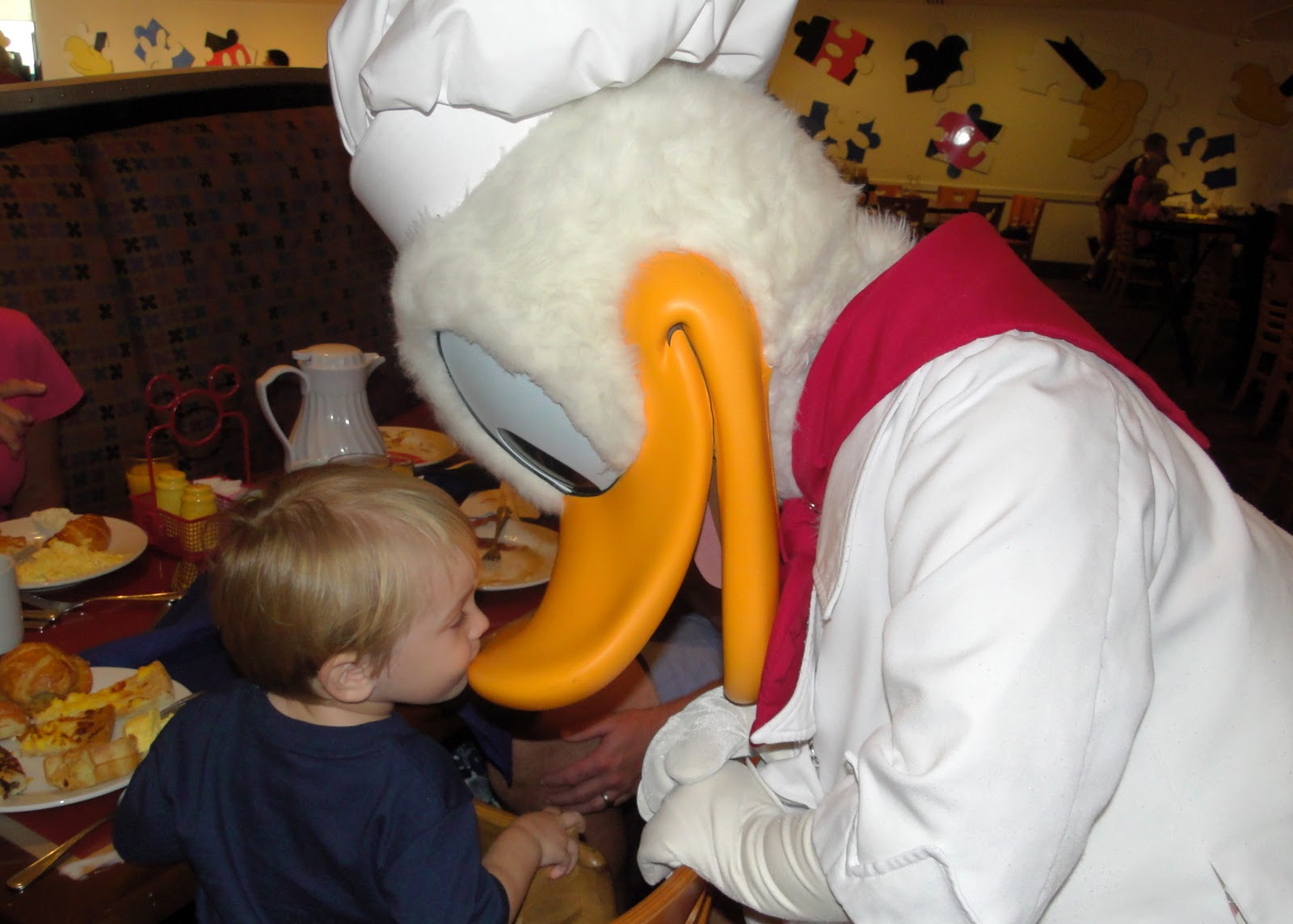 We stayed at Chef Mickey’s for a solid hour and a half. We took our time, ate to our hearts content and just enjoyed the atmosphere. Seeing so many happy, excited children in one room was truly heart warming. When the bill came we finally discovered the cost of all that fun…$30 per person (Kye was, thankfully, free). I worried Zach would complain or be upset but instead he was just the opposite! He said it was worth every penny (Mom cracked up when I said “I LOVE THIS MAN!”) and he is hardcore about doing it again on our next big Disney trip. He really thinks waiting in line is annoying and the price of the meal was worth saving the time in the lines AND the food was awesome too! 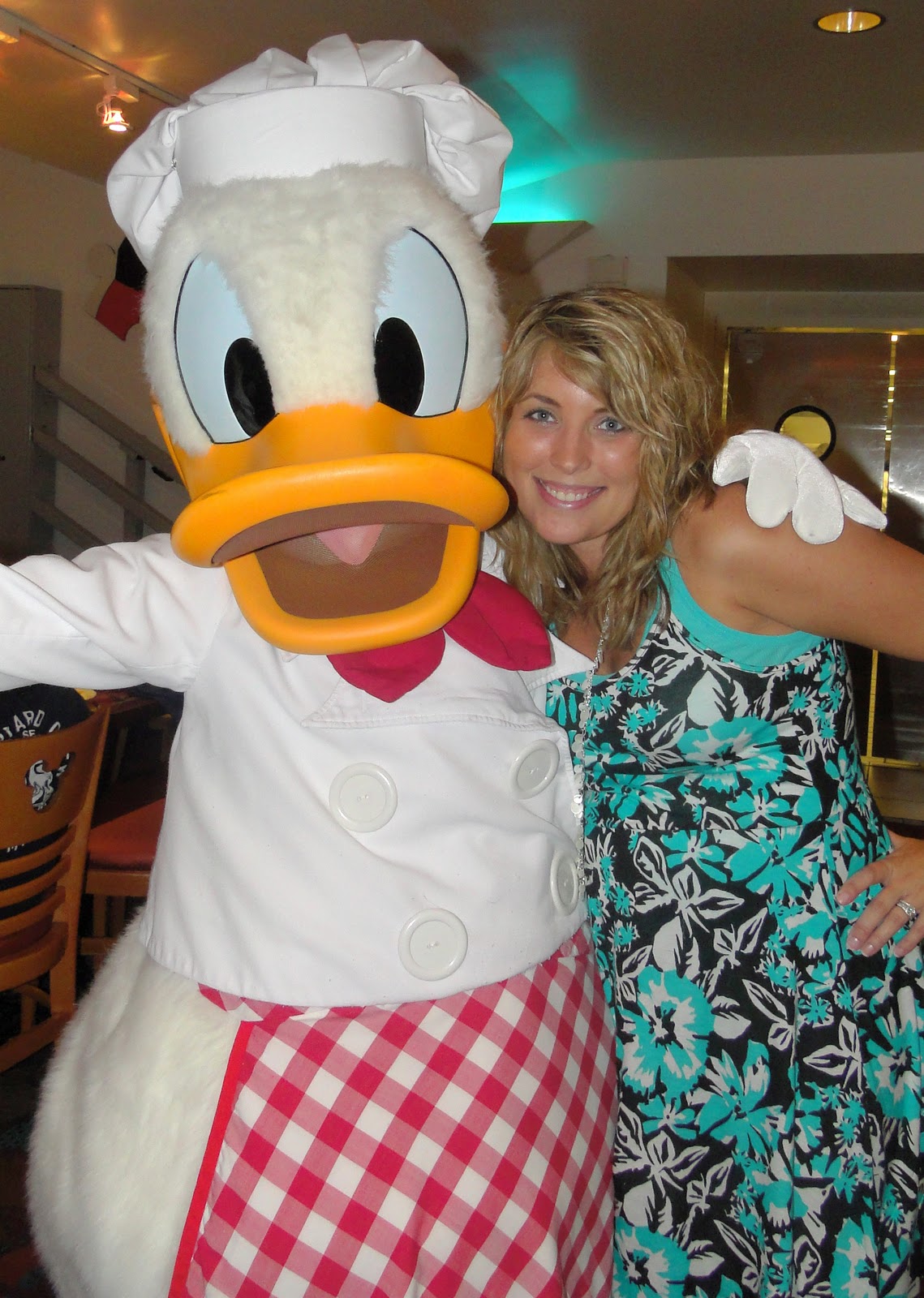