Since Uncle Spear passed away right before Easter we decided to temporarily skip the holiday so we could be with my family. I’m SO thankful we made that choice and so glad that we were able to have a delayed Easter celebration last weekend. We drove to Melbourne Friday afternoon and had Easter Dinner with yummy ham, carrots and rice that Mom made! 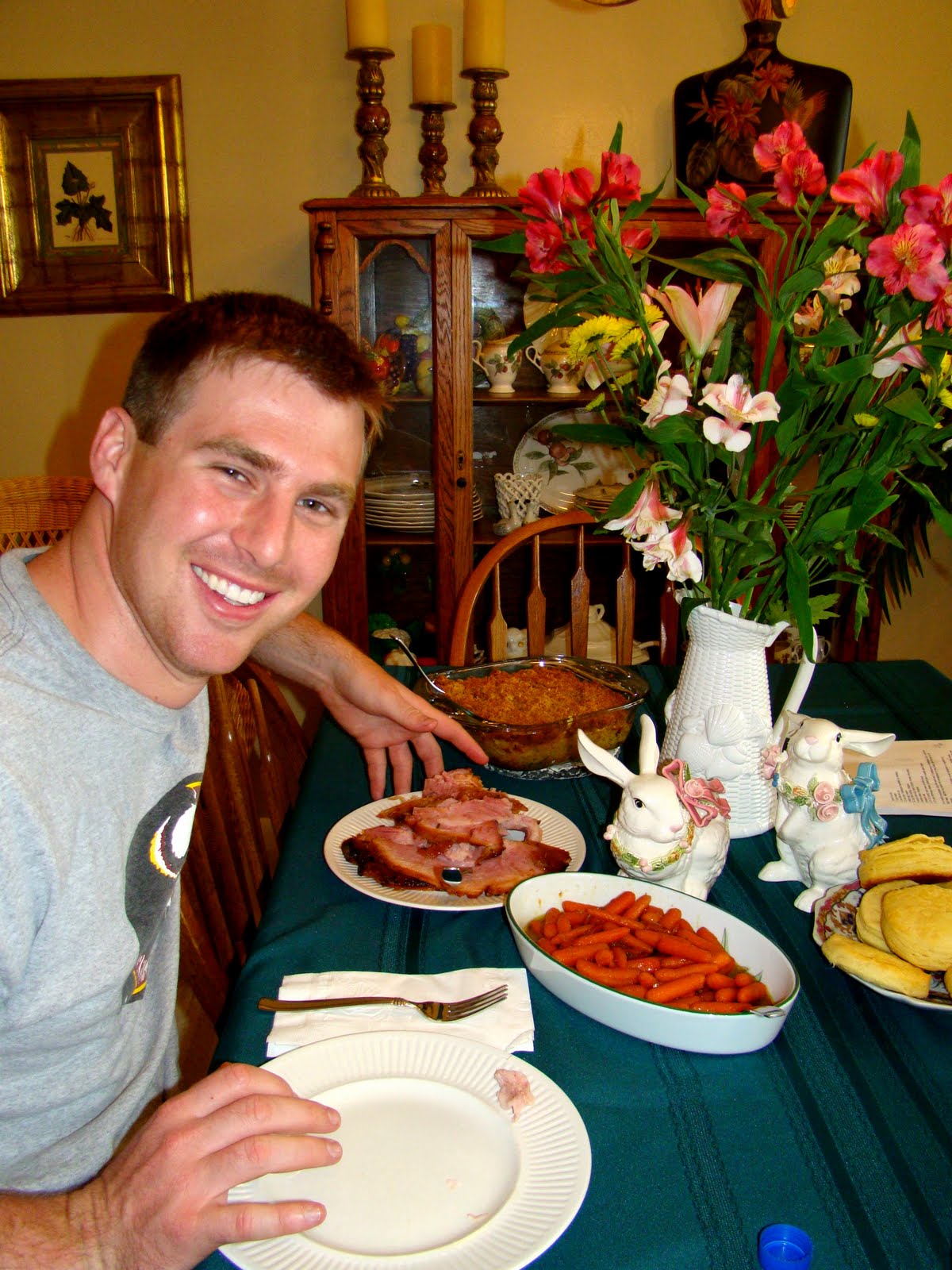 Saturday morning we woke up and took Easter Pictures (post to come) and then hunted eggs (post to come). After the excitement we were cutting it close to Kye’s first nap but let him open his baskets of goodies before going down. The timing really worked out perfectly.

You know what he was after… 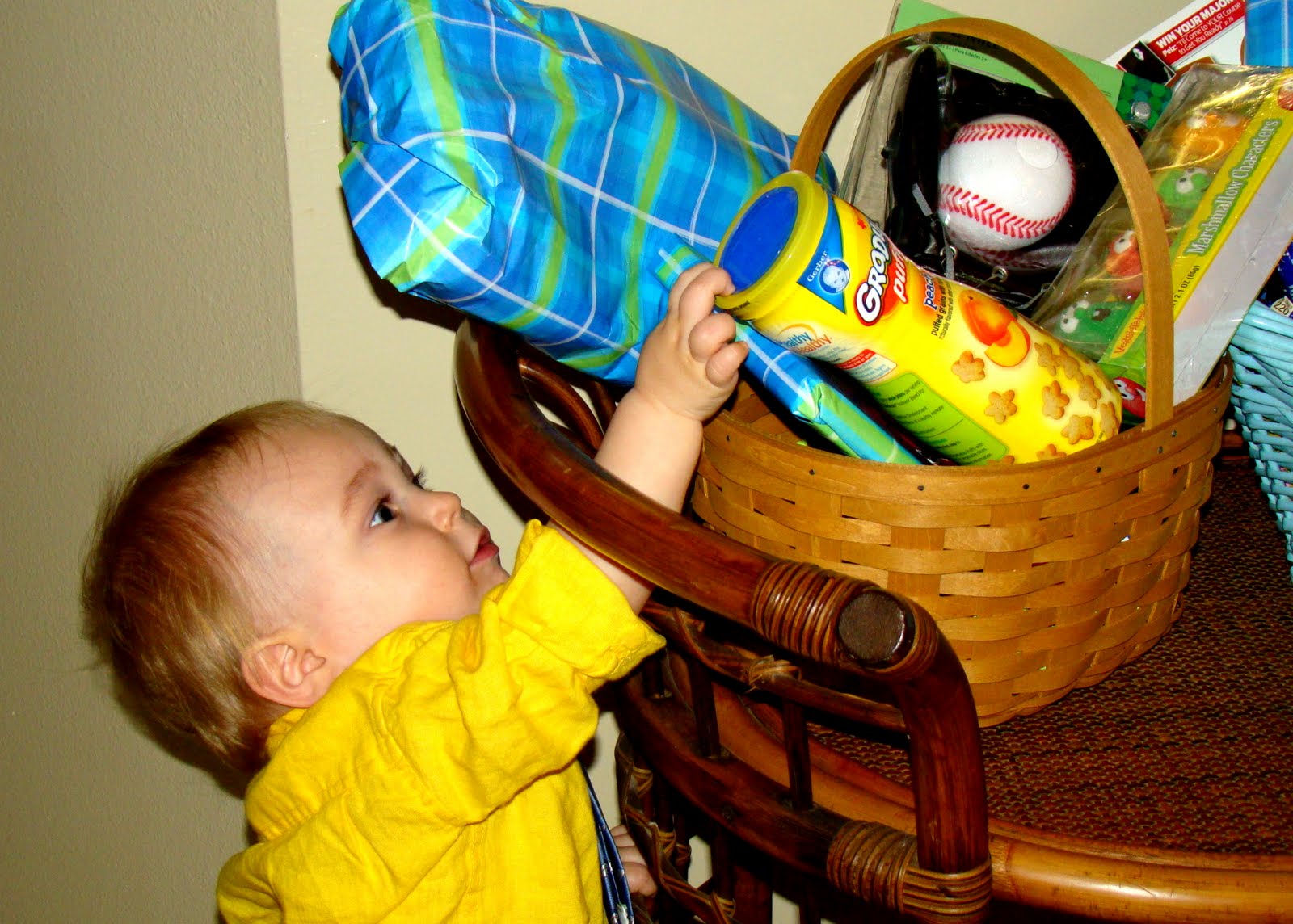 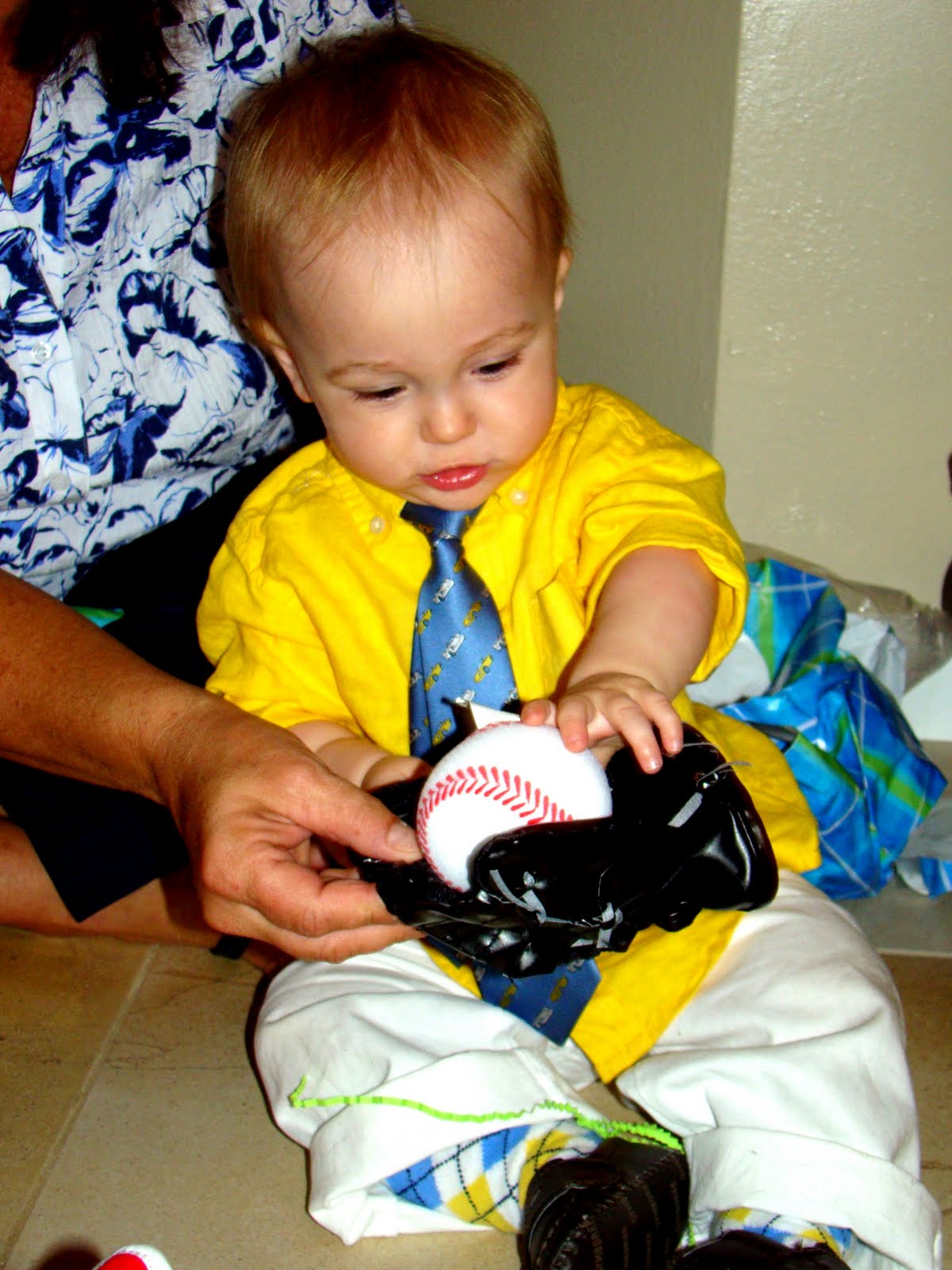 Opening what the Easter Bunny left for him 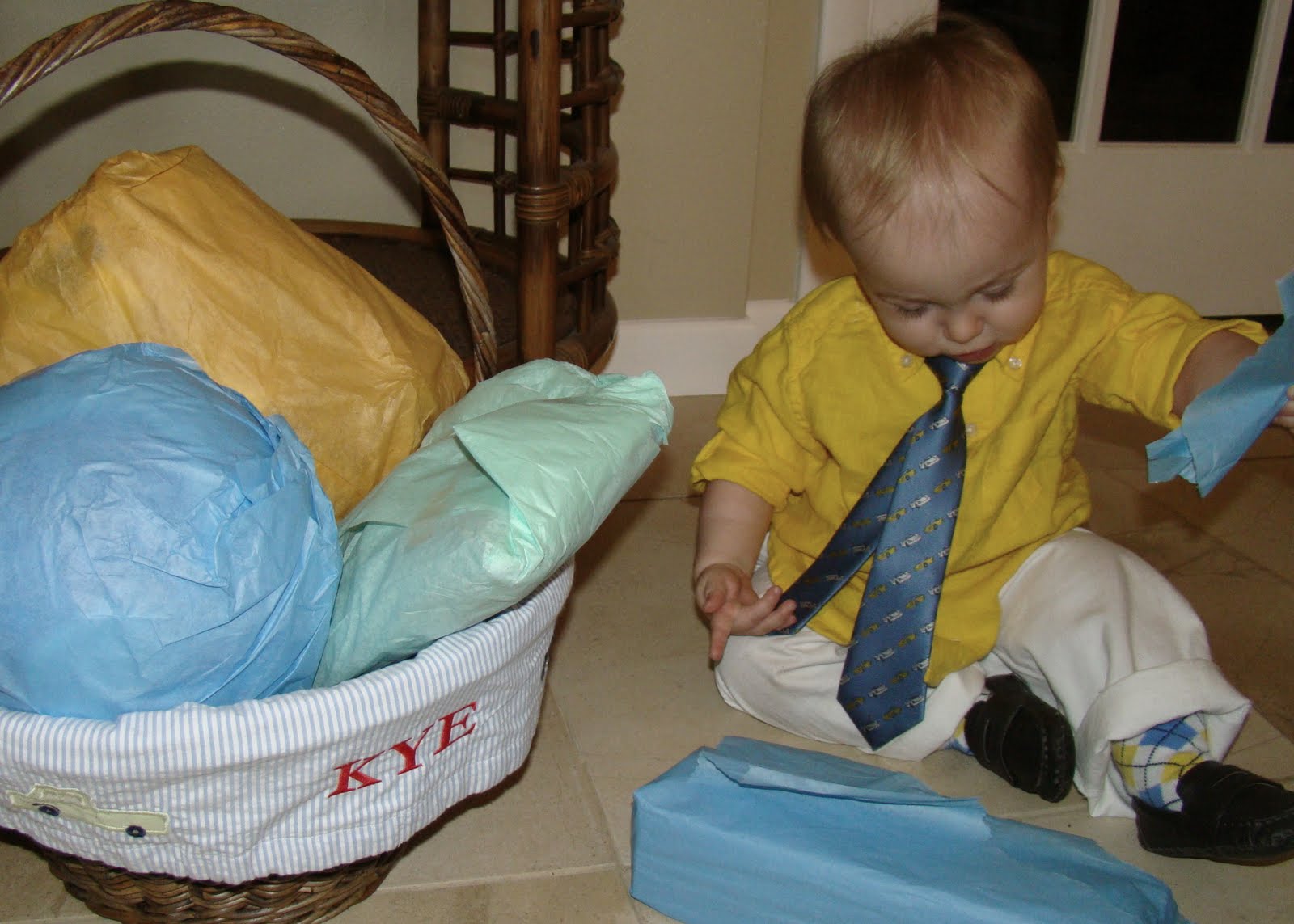 toys for the turtle sandbox 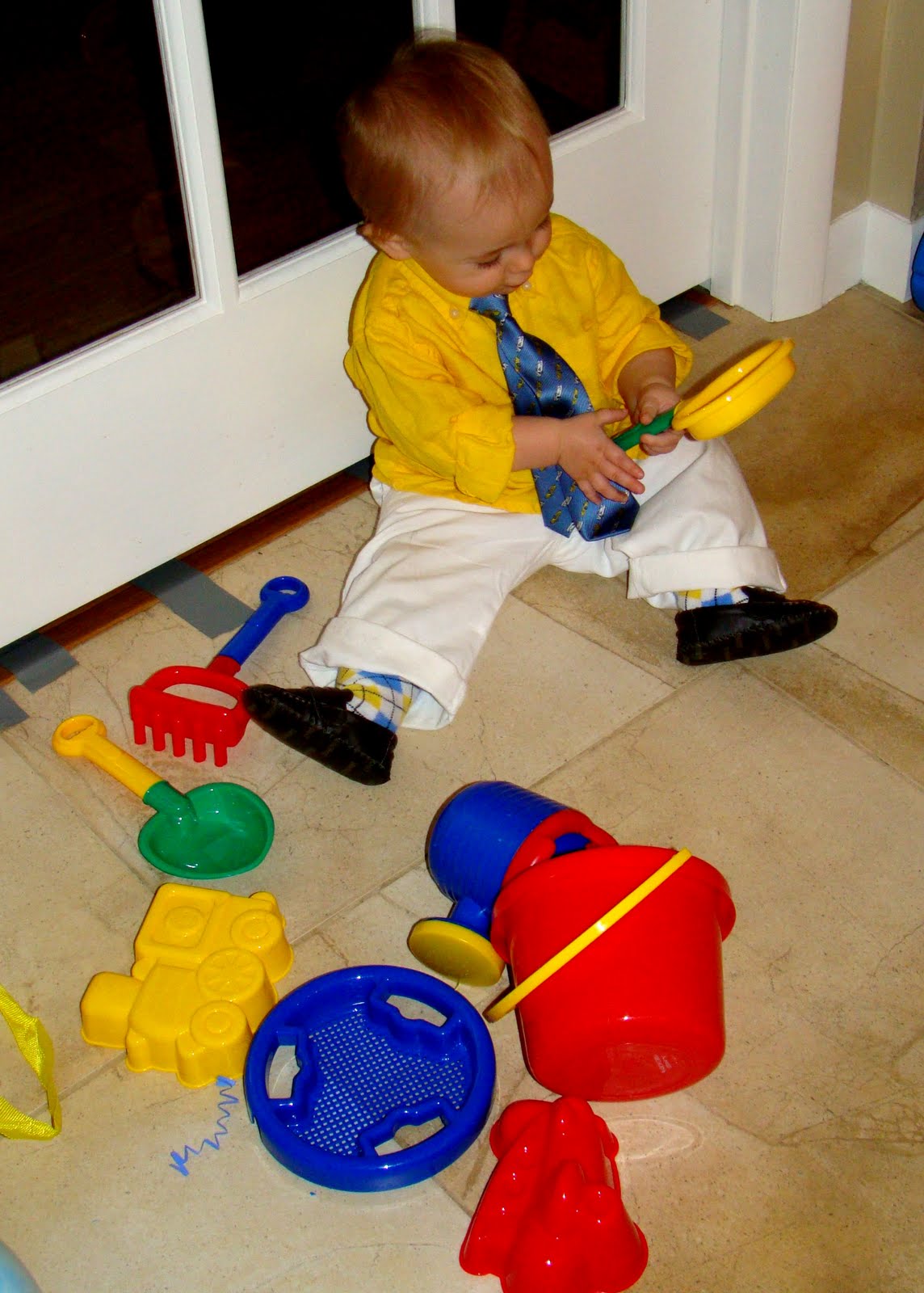 Last year for Easter we didn’t go all out. Kye was just at a month old so he wasn’t too into it and we didn’t bother getting him legit baskets (we were pretty strapped for cash for SURE!). This year I decided to invest in the baskets he will always have each year. I very rarely buy things that are not some great deal but I wanted a BIG basket for his presents and a soft one for his egg hunting. I hope we can afford to get the same ones for each of our children in the future! All three pieces (yes, you buy the basket and liner separate) are from Pottery Barn Kids and yes, they cost us a small fortune. But I consider it an investment as he’ll have at least 17 years left of Easter’s living with us so that’s a good amount of usage!!! It’s funny b/c Mom and I think so much alike and she decided that she wants to get each of her grandchildren a Longaberger basket dated the year they were born. Isn’t that a neat idea??? It’s something they will be able to keep FOREVER!!! So thoughtful!!! Here’s all Kye’s Easter goodies: 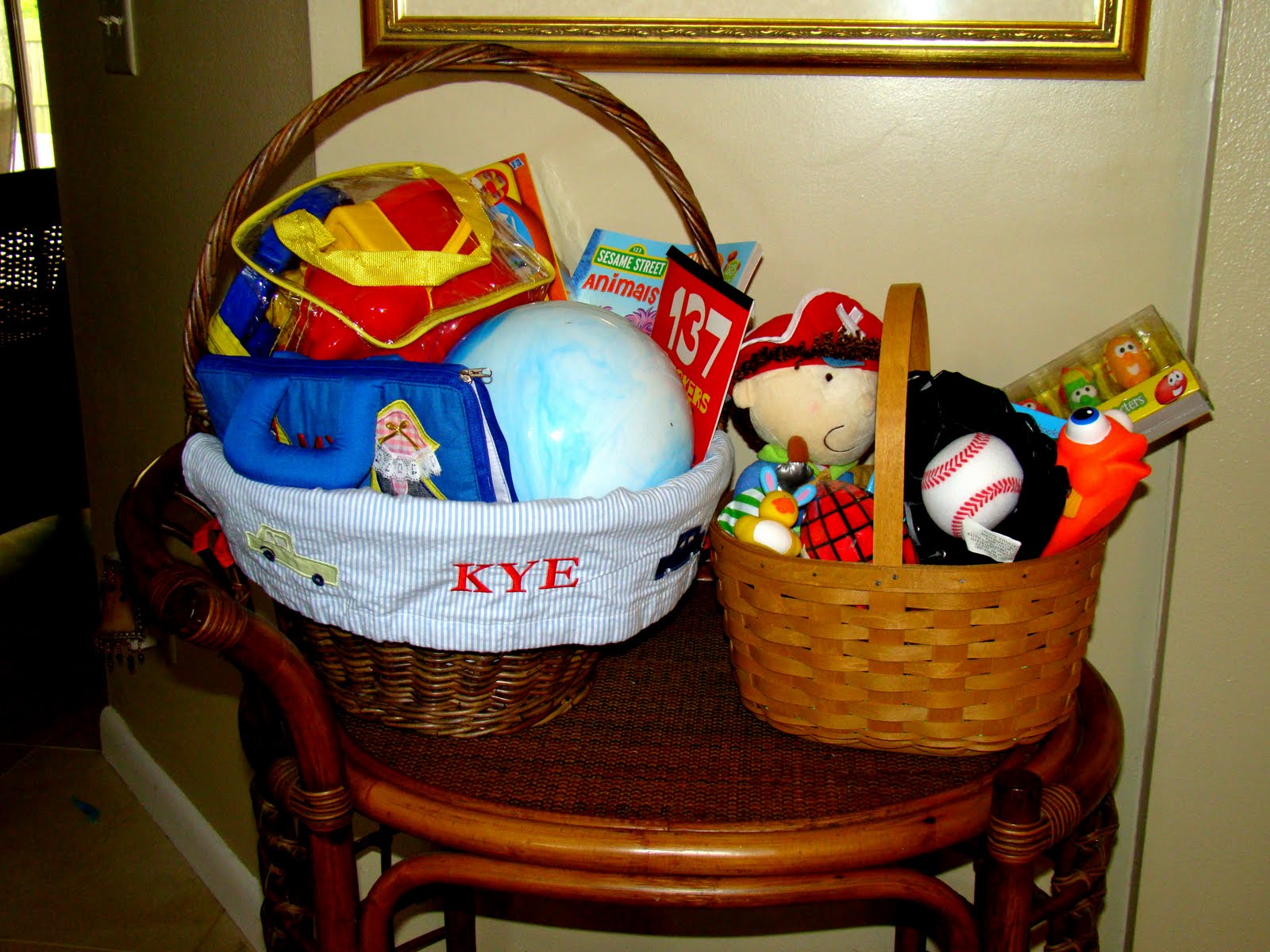 After he went down for his morning nap Zach ran and got us Bagel World for breakfast (what’s a trip to Melbourne without it?!?!) and then we attempted to do our egg hunt. Unfortunately, Kye didn’t sleep for his morning nap (he was having TOO much fun!!!) so we ended up waiting until his afternoon nap to do our hunt and our adult presents! My mom always goes above and beyond to make holidays special and this year was no different. She got us some great stuff in our basket (a super pretty white cardigan from Express for me!!!). She also hid 36 eggs and each one had a number in it on a piece of paper and that number matched a little prize. It was SO fun!!!! I got a little competitive (which is hard to believe for me!) and actually ended up finding the SAME number of eggs that Zach did!!! I was pretty pumped about it 🙂 Even more fun than finding the eggs though was opening them and seeing what prizes we won. We also each got a “trade” coupon where we could trade with what the other person had. Neither of us did that though (who wants to make your spouse mad?!? haha!) and we ended up with AWESOME stuff! I can’t wait to do some shopping with my gift cards 🙂 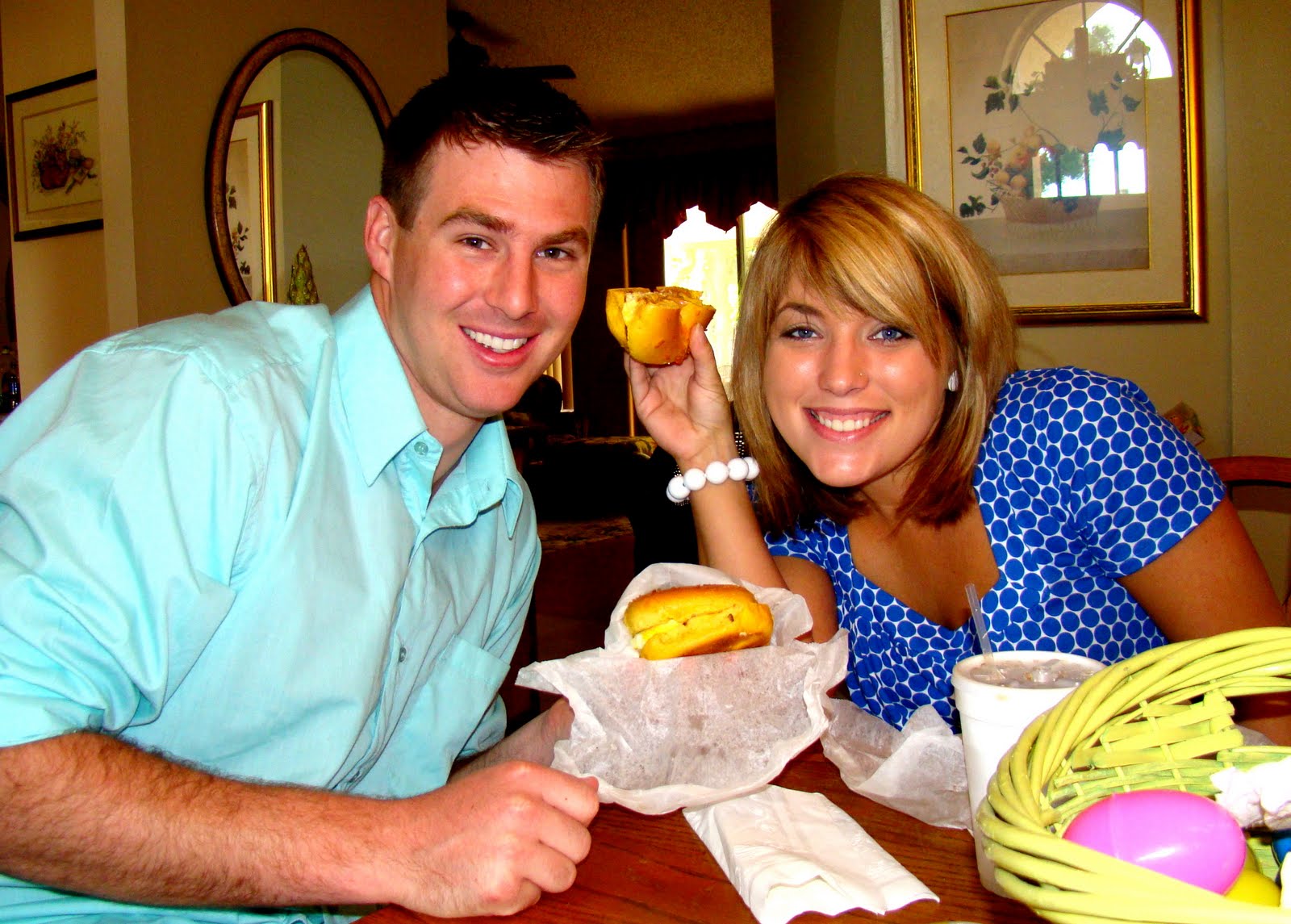 Tied for FIRST (which is good enough for me!) 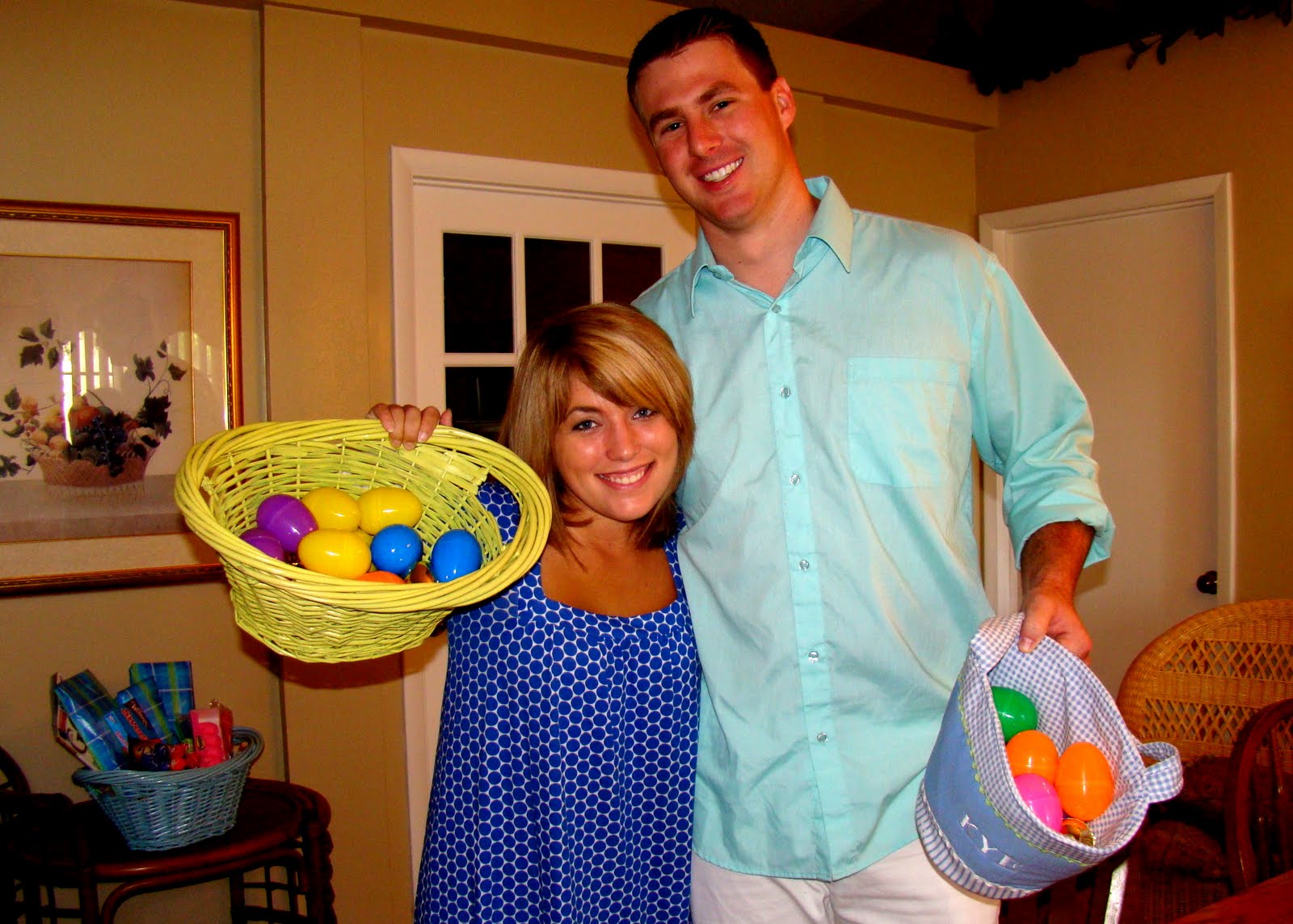 our prizes! thanks MOM! 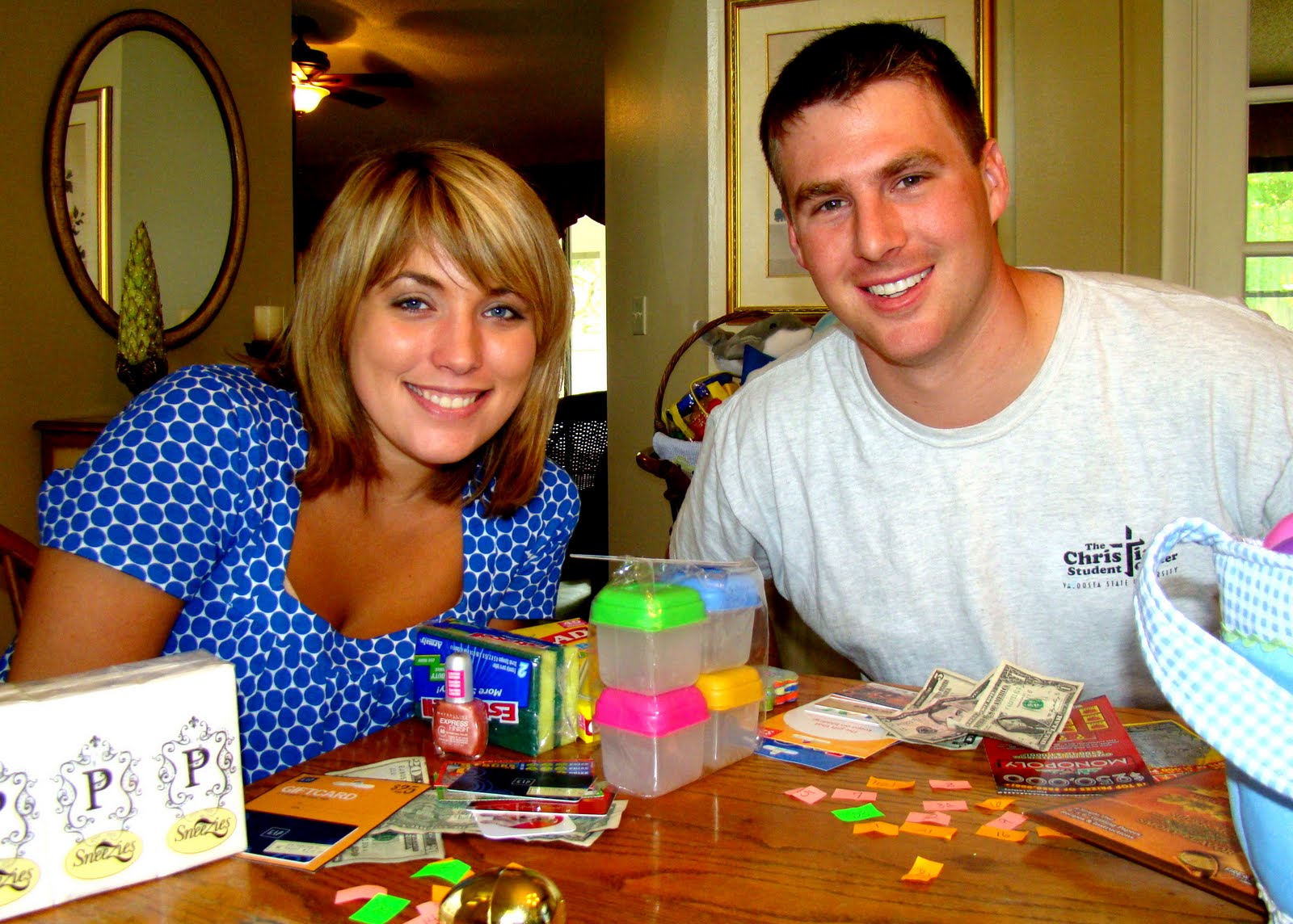 As you can tell by how pasty and out-of-it I look, I didn’t feel good!!! I started feeling crummy the day after I took Kye to the walk-in clinic, then I stayed feeling crummy on our trip to Amelia Island, then I got a little better for a couple days and started feeling crummy again the day we left for Melbourne!!! GRRRRR! So annoying. I ended up taking a nap Saturday afternoon instead of going to the beach like we had planned but at least I was feeling a little more alive for our dinner date that night with Liz and Jason.

Jason is my cousin (and was the best man in Brandon and Chrissy’s wedding!) and Zach and I LOVE his girlfriend Liz! It’s been great because the wedding stuff allowed us to get to know Jason better too and he’s such a great guy and so fun. They both live in Tampa but happened to be in town for the weekend too so we got dinner at Long Doggers (another Melbourne-must) and then had so much fun that after we went for ice cream at a little place that is cash only and at 9:30 at night had a 30 min long line. It was worth the wait though as the ice cream was cheap and SO amazingly good. We stayed out with them for over 4 hours and just had a great time getting to know Liz better and hanging out with another fun couple. It’s so great hanging out with family because you KNOW they will like you haha. Takes that pressure off for sure! We plan to go visit them in August and hope they get a chance to come see us too!!! 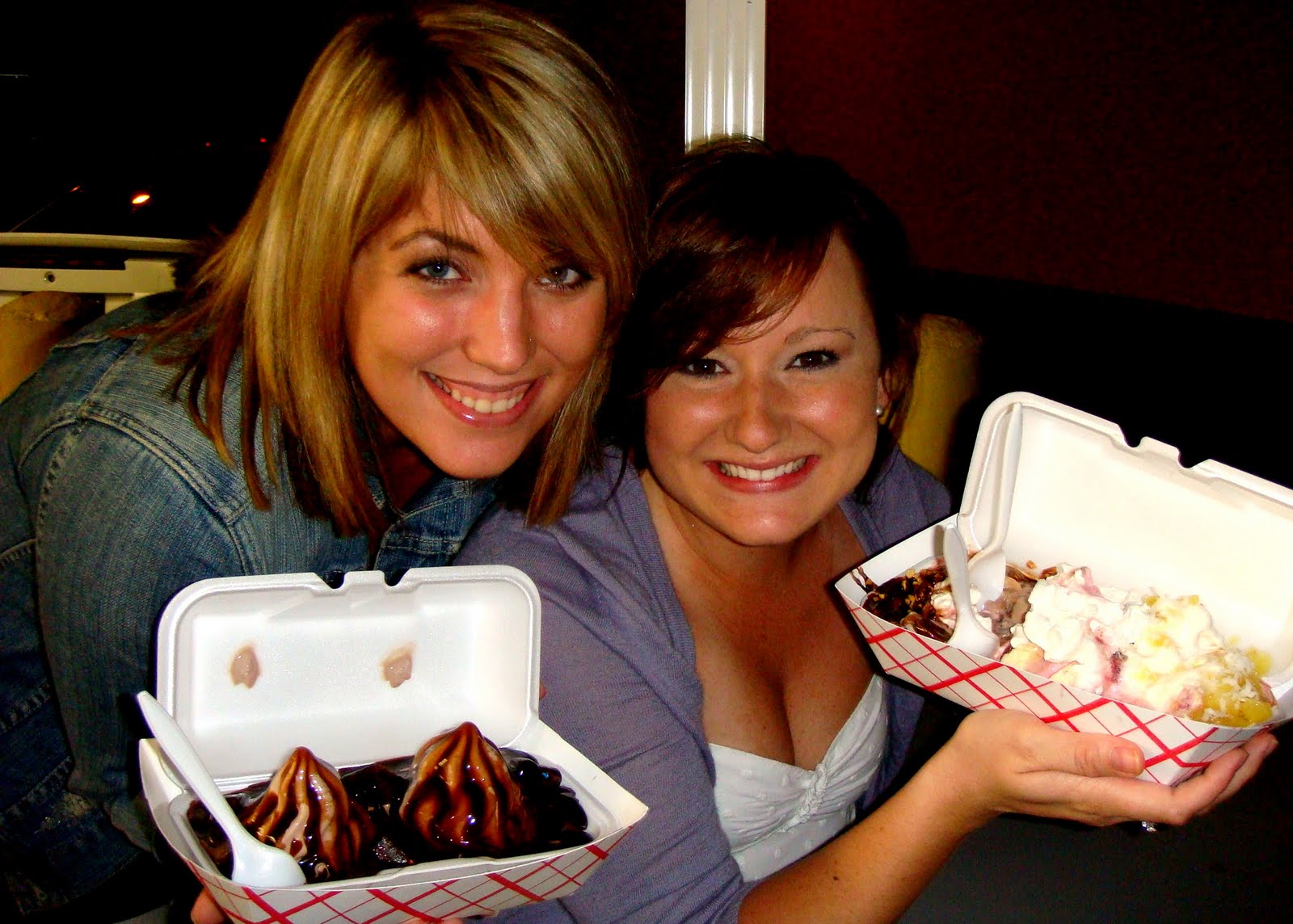 …while the guys got some wimpy milkshakes haha 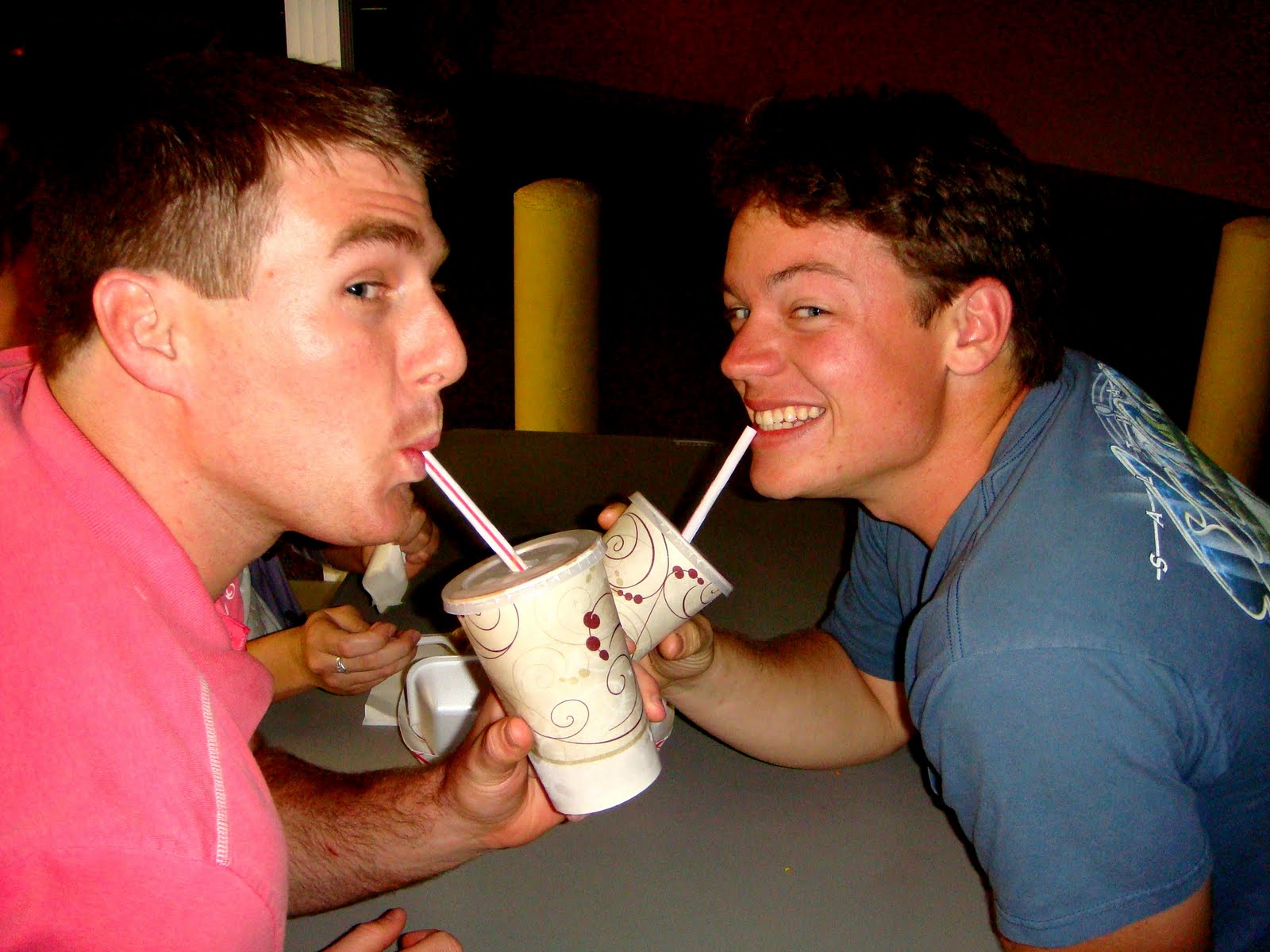 in it…um awesome)! I love that we’re both not afraid to grub out 😉

It was a SUPER fun night and I hope we have more times like it in the future! On Sunday we went to church at the little church we visit when we are in town and enjoyed a nice service (it’s such a small church that there were about NINE people there total and Kye got a lot of attention). Afterward we met up with my family when they were leaving breakfast just to say hey and let them see Kye for a few minutes then we loaded up and hit the road!

On the way home Kye got to watch his VERY first Disney movie (technically it’s Pixar but Disney owns Pixar so it counts)!!! It was so funny because on the way down to Melbourne Zach and I talked about letting him watch the movie Cars

because he is in LOVE with cars and we thought he’d really like it. When we got to Mom’s we told her about it and she actually owned the DVD! PERFECT!!! I figured he’d be saying “car” “car” the whole way home while watching it but he didn’t. Oh well…he enjoyed it AND he slept well so I was able to sleep too 🙂 I didn’t let my crummy cold keep me from enjoying our Easter weekend!