You all know I’m down to use bribery in order to get some pics of my kids…you do whatcha gotta to get that cute smile am I right?!?! Anyway…when I took the Big Brother/Little Sister pictures I told Kye he could have a cupcake after we finished. We had made ice cream cone cupcakes (my first ever attempt and they are AWESOME) that week for Casey and Jordan. We had them over for dinner after they got home from their honeymoon so I thought the cupcakes would be fun and a good way to get rid of some of the Easter candy (I used the candy as toppings!).

I was finishing up taking pictures of Brittlynn and Kye went in to get his cupcake. 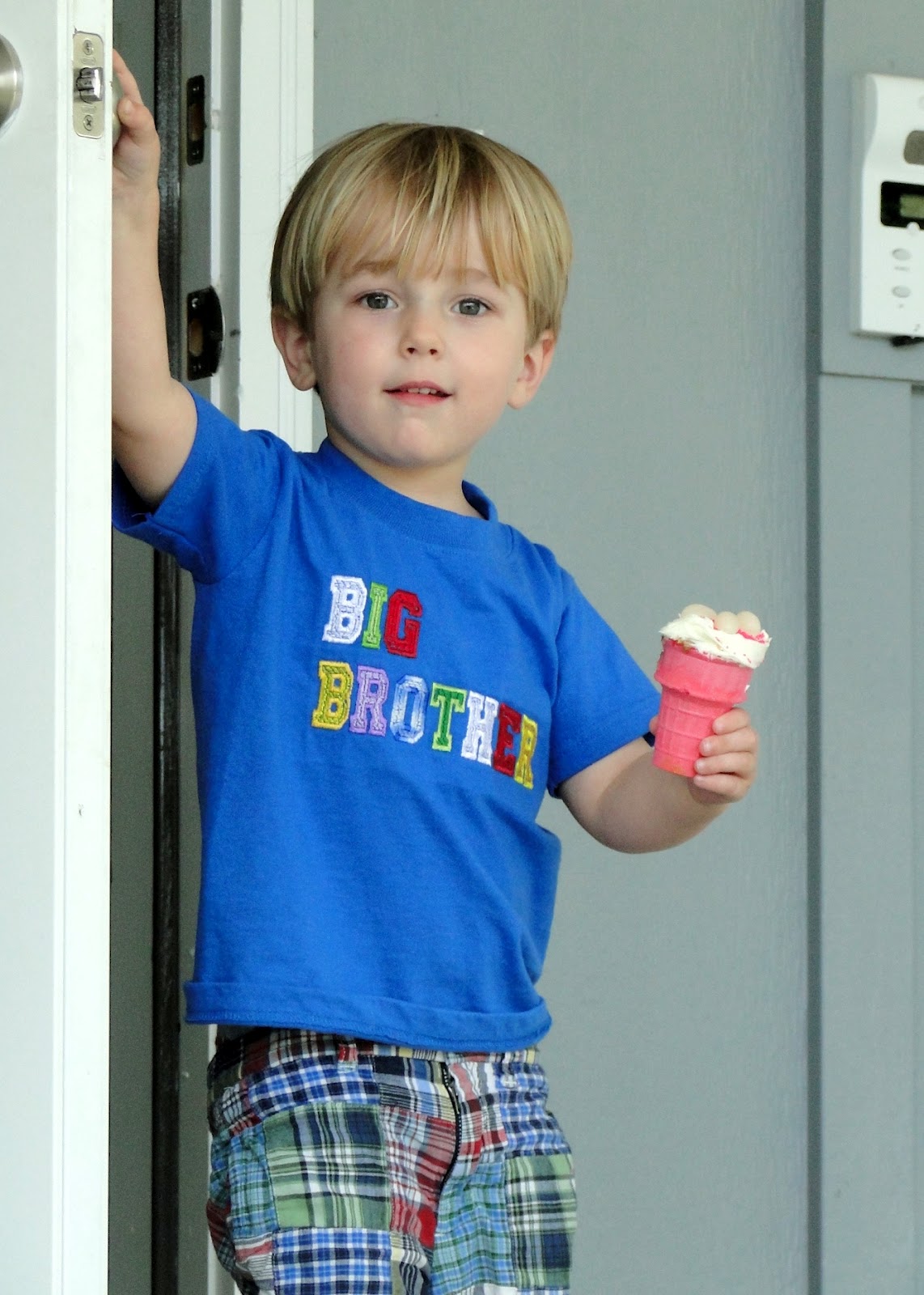 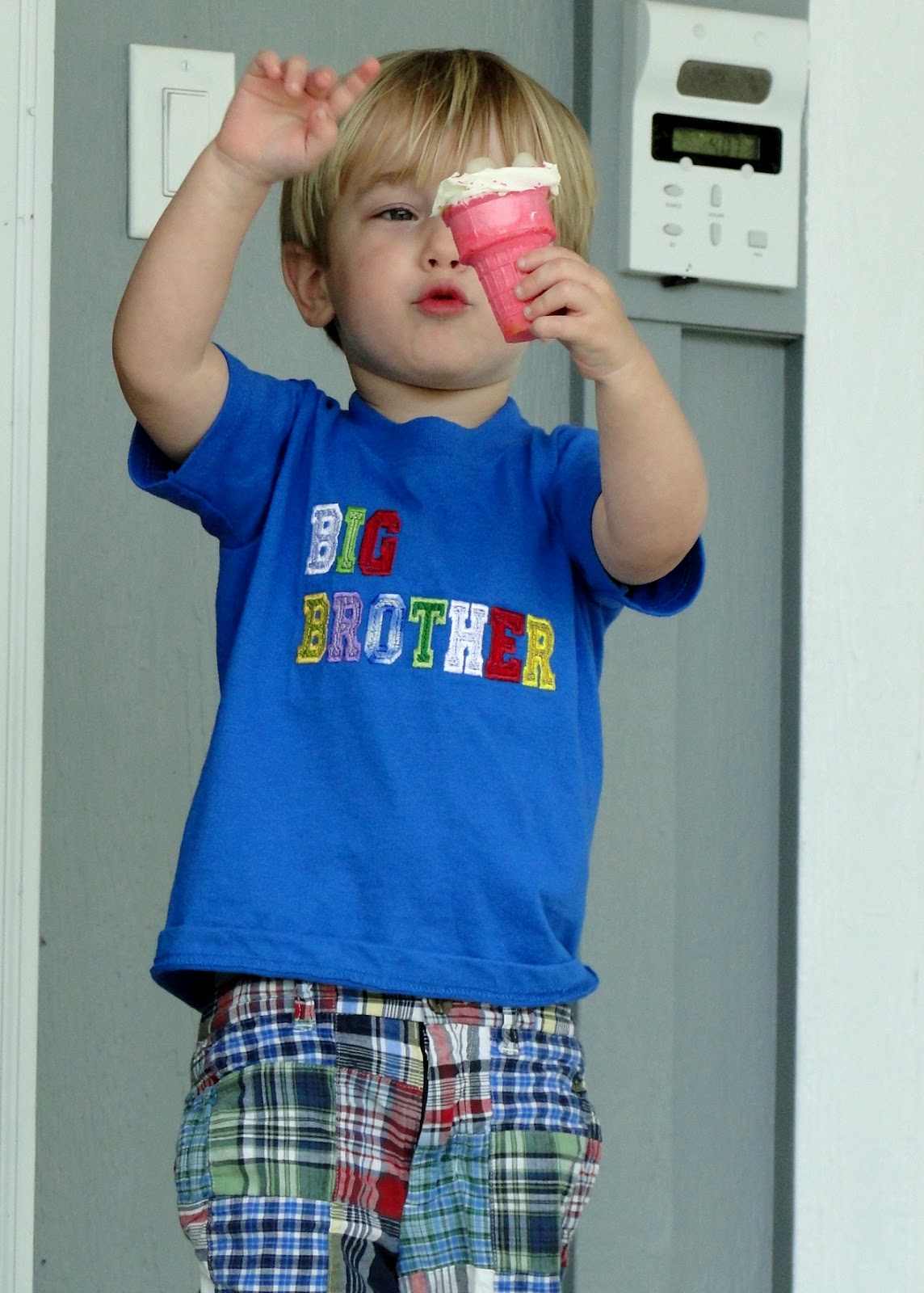 We sat outside while Kye enjoyed his cupcake (and I had one too…) then I had to have him come in so I could go put Brittlynn down for her nap. 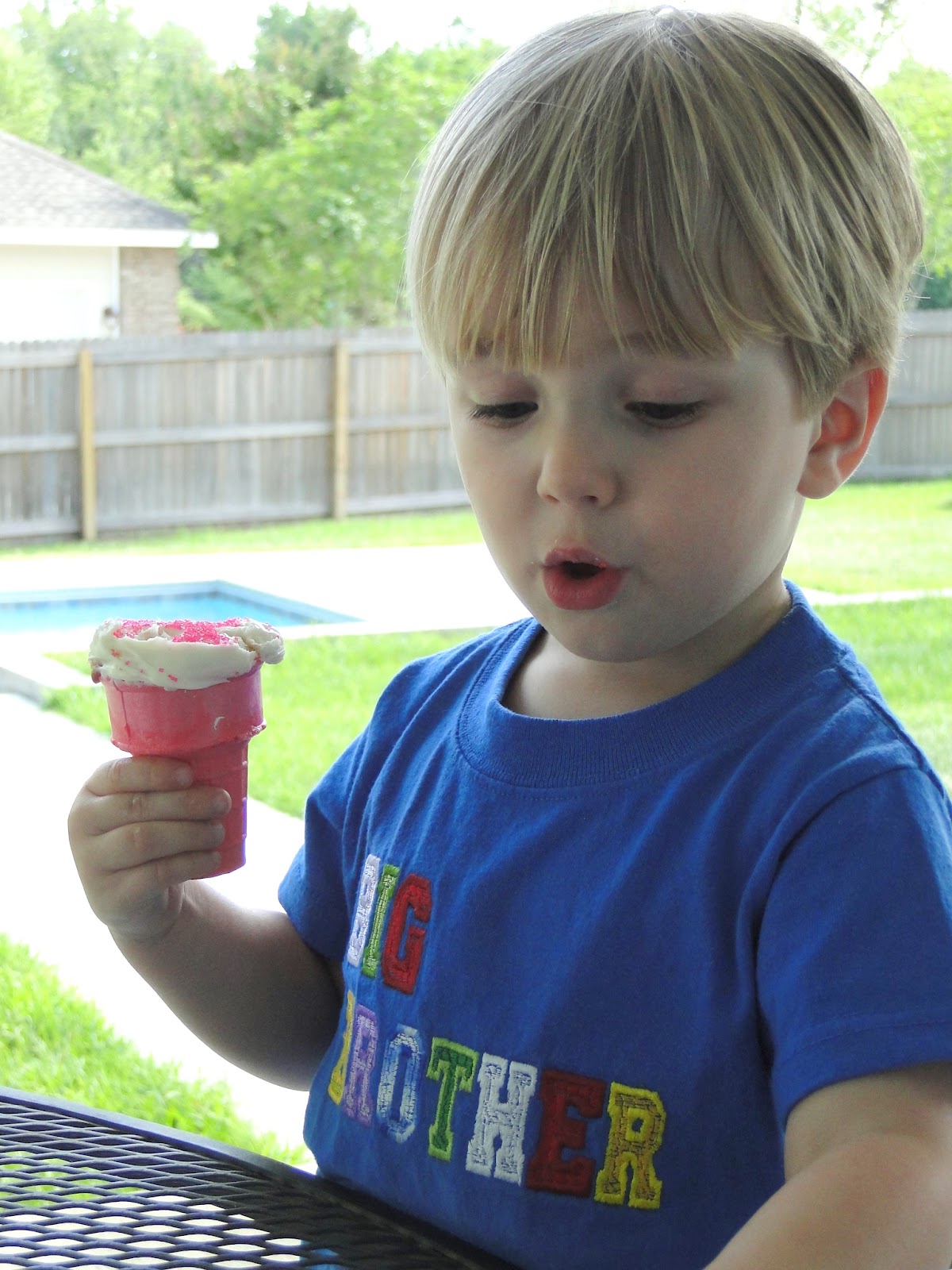 Kye knew that he was only allowed one cupcake. Yet when I came out of Brittlynn’s room he had two in front of him. The one I had allowed him to have and then one other one. He had eaten all the candies off the top of it and had licked much of the icing off the edges. As soon as his eyes met mine it was obvious that he knew he had done something he shouldn’t have done. I told him I was so disappointed in his choice and that we had to throw that cupcake away because it was ruined since he ate the candies and licked it. It was the last cupcake left and we had been saving it to give Daddy when he got home.

Oh my goodness. You would have thought I had told him his best friend had died. He was devastated. He cried these big, sad tears. He begged and begged to get it out of the trash. He didn’t care that he couldn’t eat it. He only cared that he had ruined Daddy’s cupcake. It was so interesting to me because he REALLY understood that he had made a choice that would hurt someone else and he felt so bad about it. He cried for over 30 min begging to get the thing out of the trash for Daddy. He also showed me how clever he is. I figured he’d just keep on crying but instead I could SEE his little mind working to find a solution. He was all excited and said to me “let’s get it out of the trash and put new candy on it for Daddy!”

So that’s what we did. 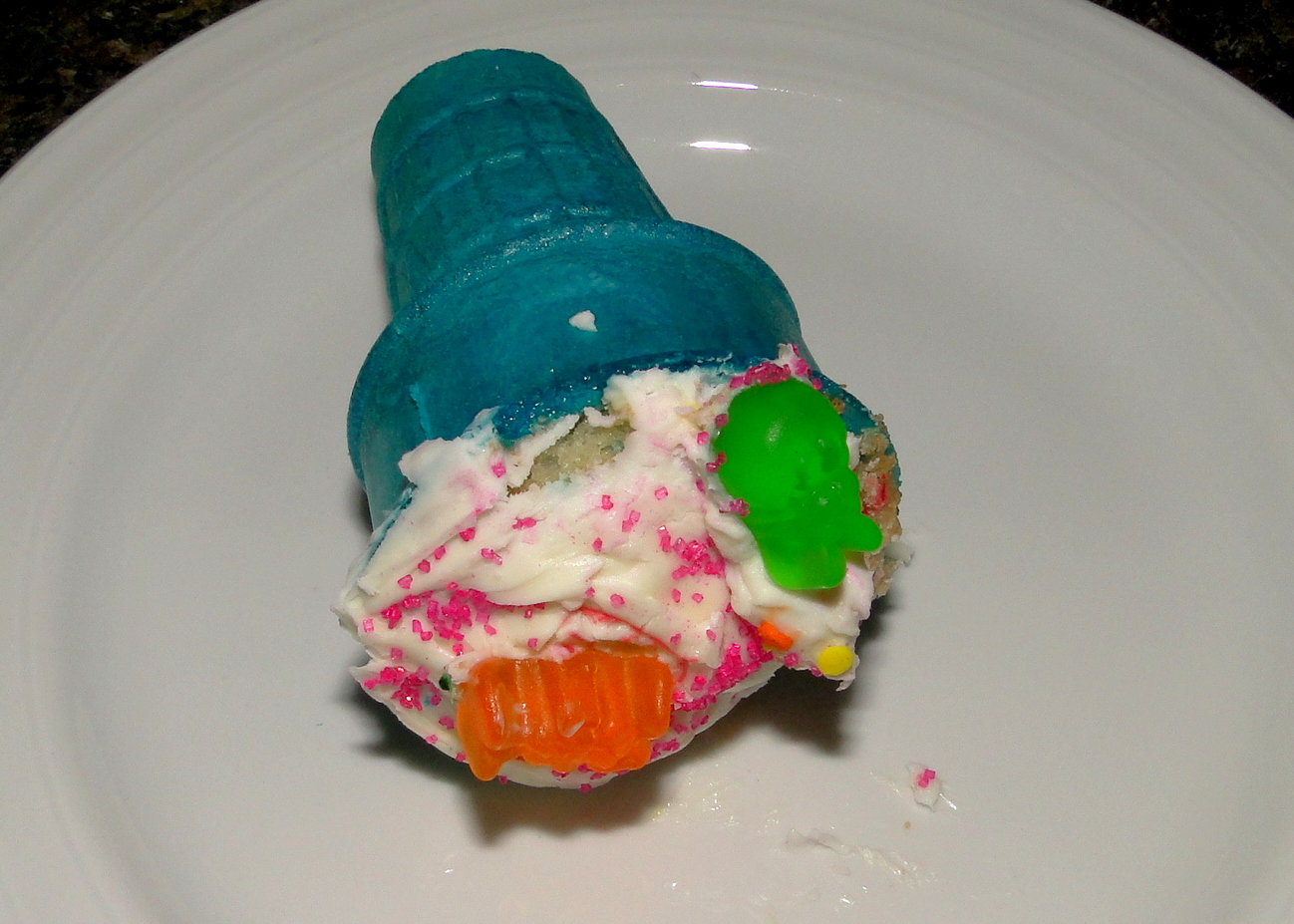 It was close to 5 and Zach got home within 20 minutes of the entire thing. But Kye did not MOVE from this spot until his Daddy got home. He guarded that cupcake! While we were waiting he came up to me, 100% on his own, and said “I’m so so sorry Mommy.” He held me and cried and it was such a wonderful moment for me as it was reassurance that we are doing somethings right with him! His tender, loving heart was a precious sight to see. He also told me he wanted to tell Jesus sorry too so we prayed about it and asked Jesus to forgive Kye for taking the cupcake when he knew he wasn’t supposed to.

Isn’t this face just pitiful? I want to give him a hug! 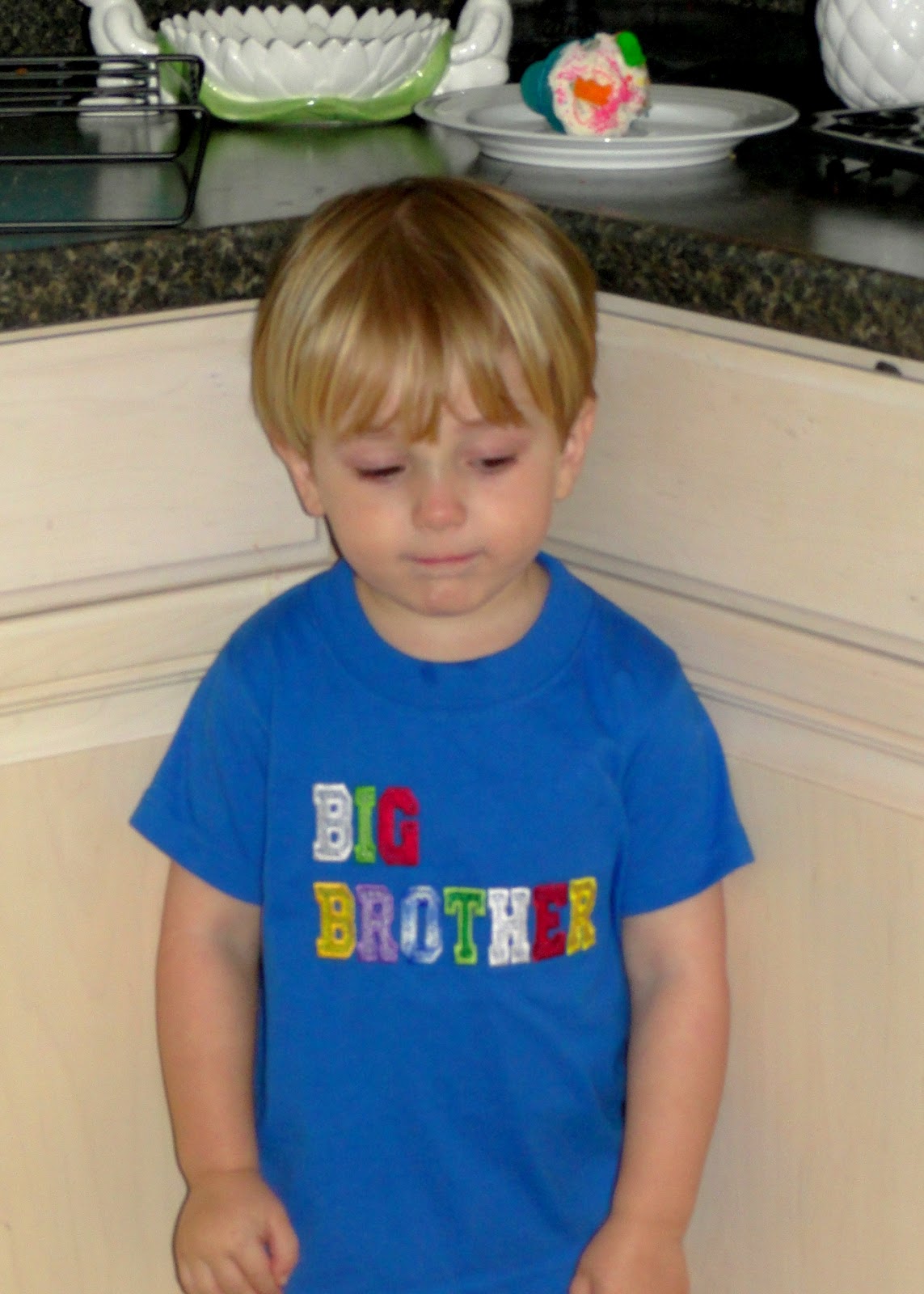 When Zach walked in the door Kye RUSHED up to him and was so eager to give him that cupcake. It was funny because he tried to play it off like nothing had happened and like he had just saved that cupcake for Daddy. Good thing I told him it had been in the trash so he knew not to eat it 😉

I know my son is only three. But I do trust him and I do see that he is able to have more freedoms than he could before. I trusted him to sit at his seat and eat his cupcake while I put Brittlynn to bed and I learned then that I can still trust him, but that I also need to remind him of the expectations I have of him. I should have said “you eat YOUR cupcake and that’s all” before I left to put her down.

Even though it was a dramatic half hour or so, I am proud of how Kye handled it. He knew he disappointed us (and Jesus as well) and it hurt his heart to know that. He didn’t need punishment. No spanking. No time out. No taking something away from him. Just knowing that he made a poor choice that would hurt someone else was enough. Wouldn’t life be so much better if ALL of us felt that way? If we truly were concerned about others and how our actions affected them?  Wouldn’t it be wonderful if we went to God about every “little” sin and asked for Him to forgive us? Kye and I both learned a lesson that day and I’m thankful to him for it.