One of my favorite Christmas traditions is decorating cookies with my mom. I’ve done it as long as I can remember and have enjoyed scarfing down on the beautiful creations through New Years 😉 Mom knows how much I love the cookie dough and she made me an entire batch of just dough to enjoy (which I downed in like two days…I know…kinda gross!).

This year my brother and his wife decided not to celebrate Christmas with us when we do it on the 26th and instead the came up over the weekend of Dec 16th to visit Mom and celebrate with her. Mom thought it’d be a good time for us to all decorate cookies together. It worked out pretty well! Right when we finished up with the photo shoot we jumped in the car and headed to her house. We were still even in our Christmas outfits and just changed when we got there! 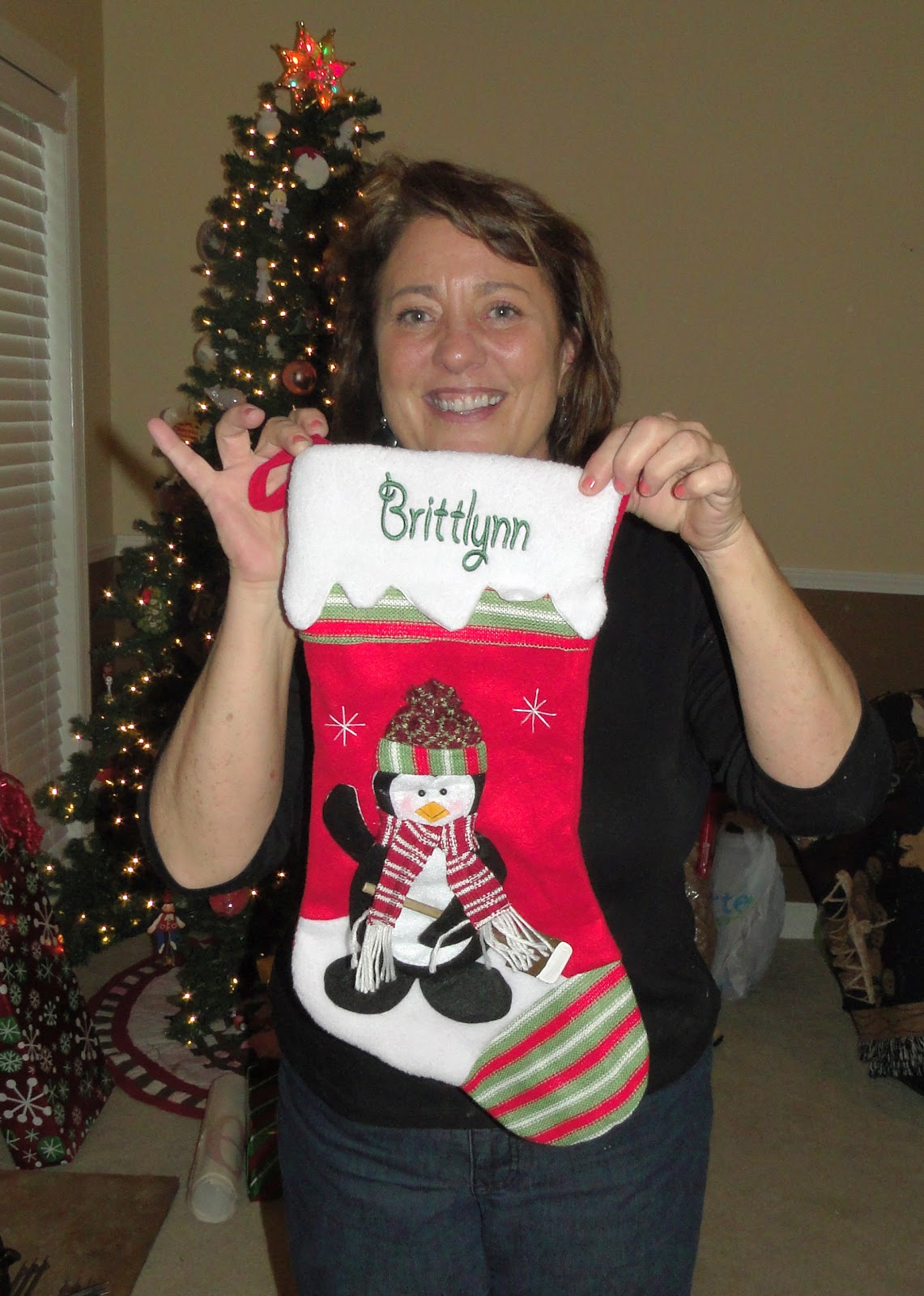 Kye is at SUCH a fun age!!! He’s able to really understand things and is old enough to get into our traditions. He was stoked about decorating, but especially about eating, the cookies. He ended up decorating probably a good 80% of them on his own!!! 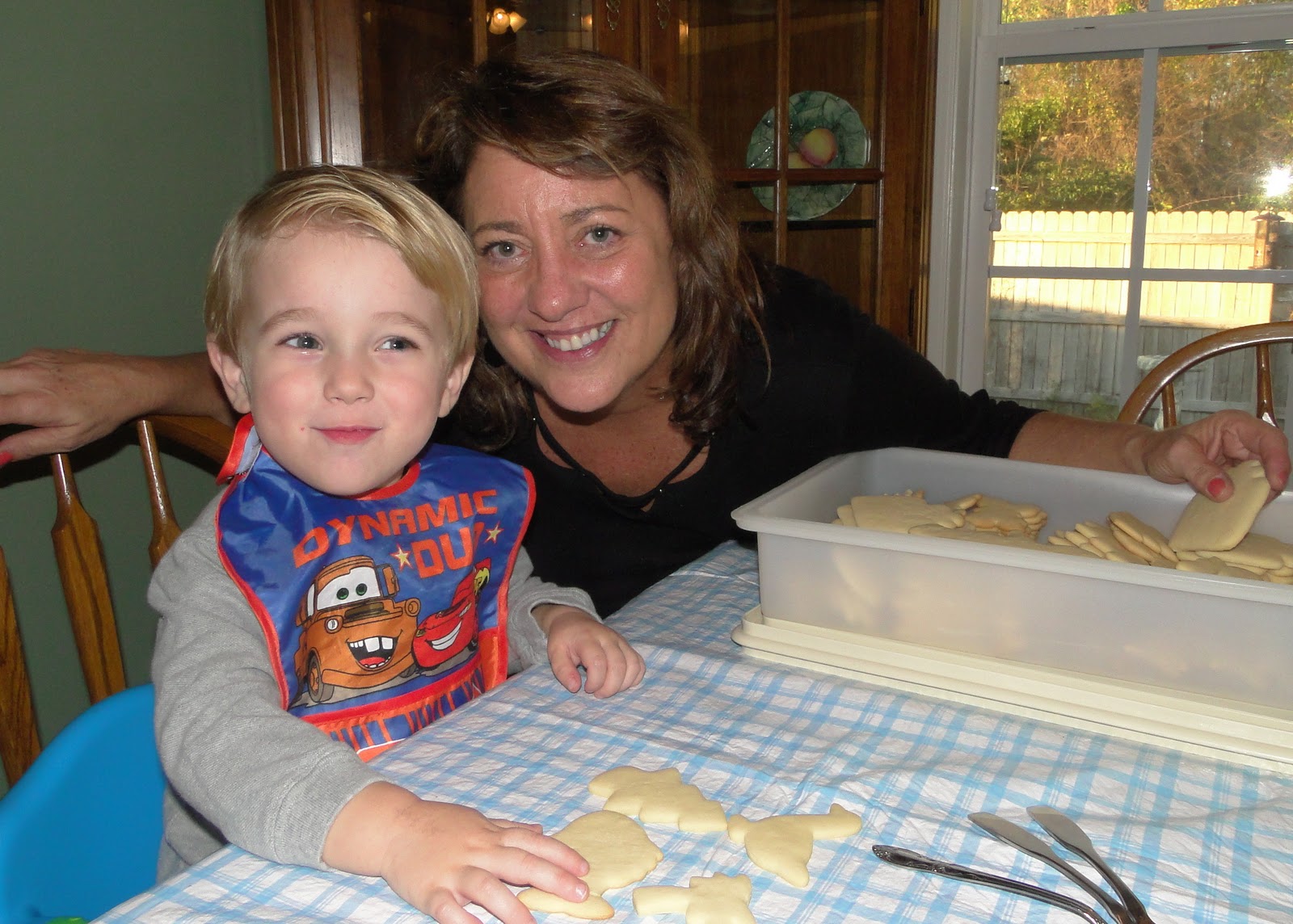 The sprinkles were a hit 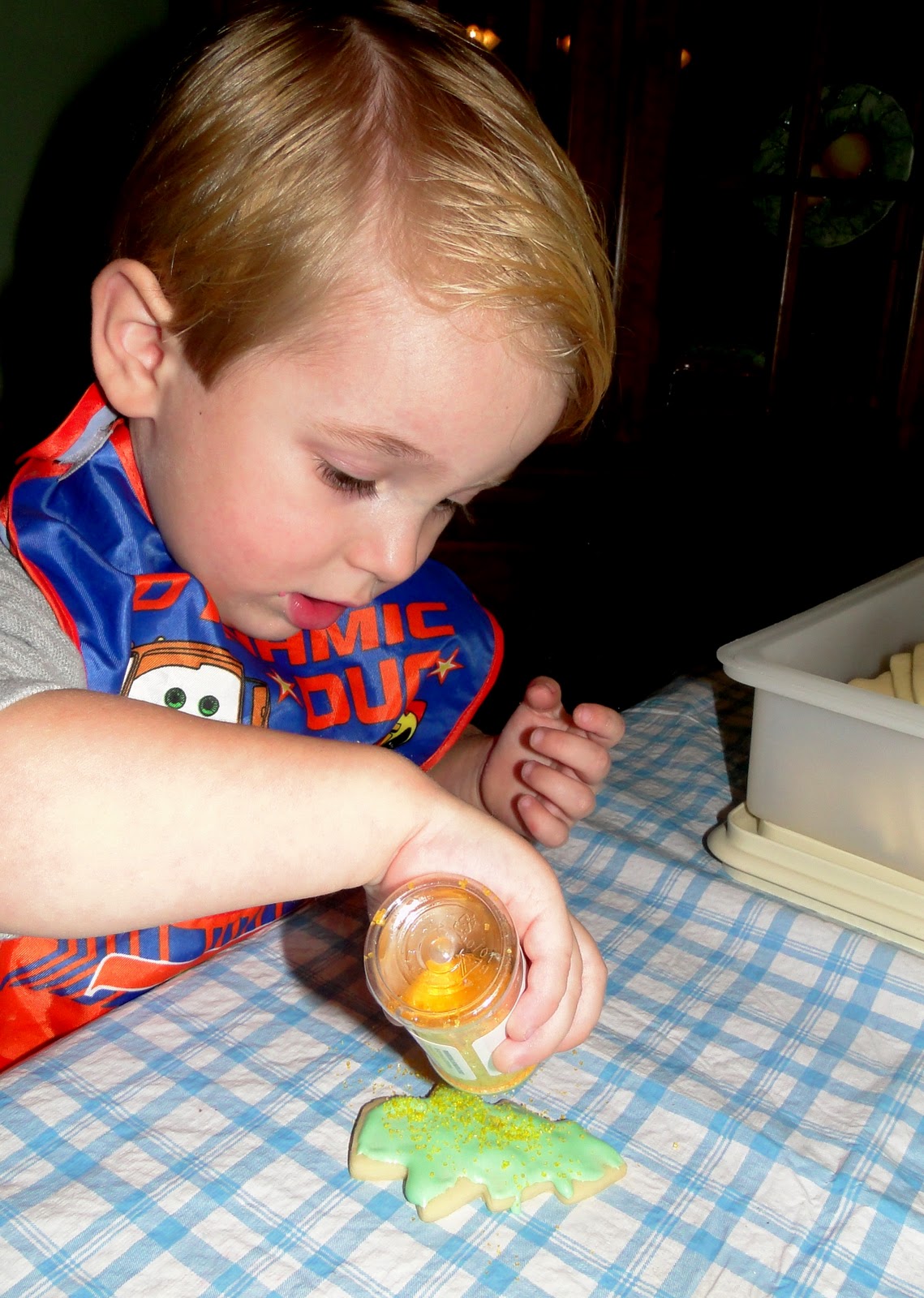 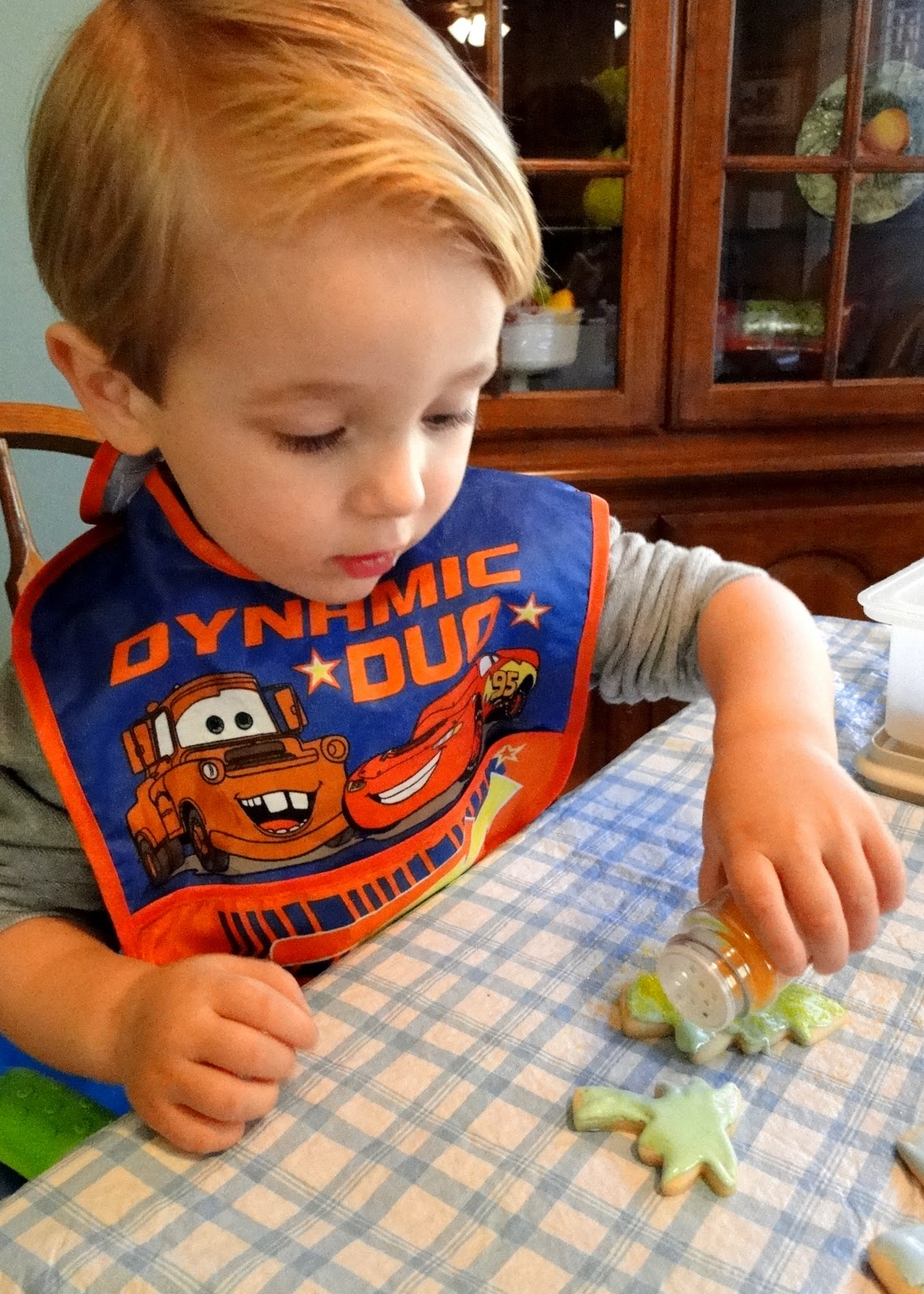 Some of his creations 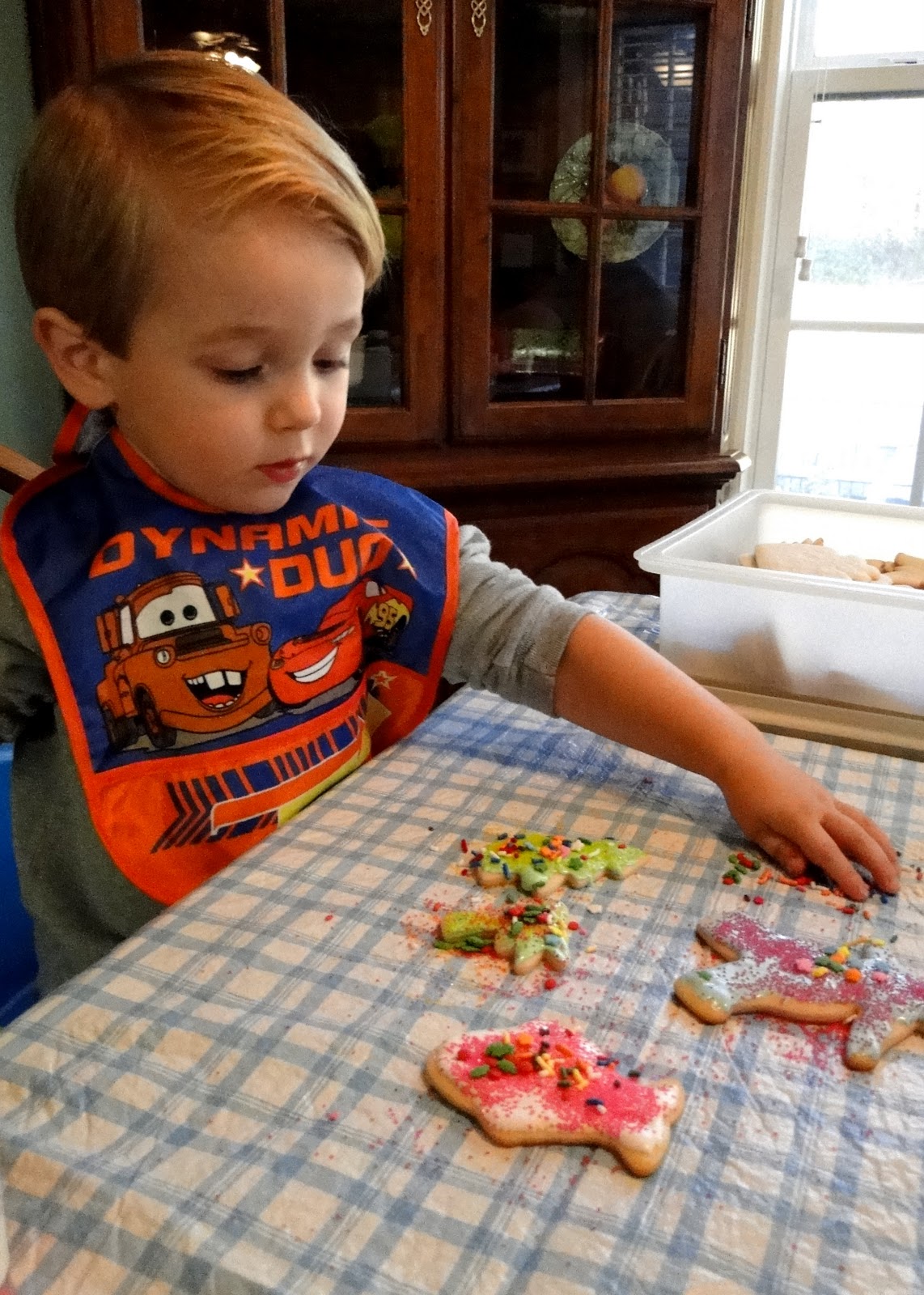 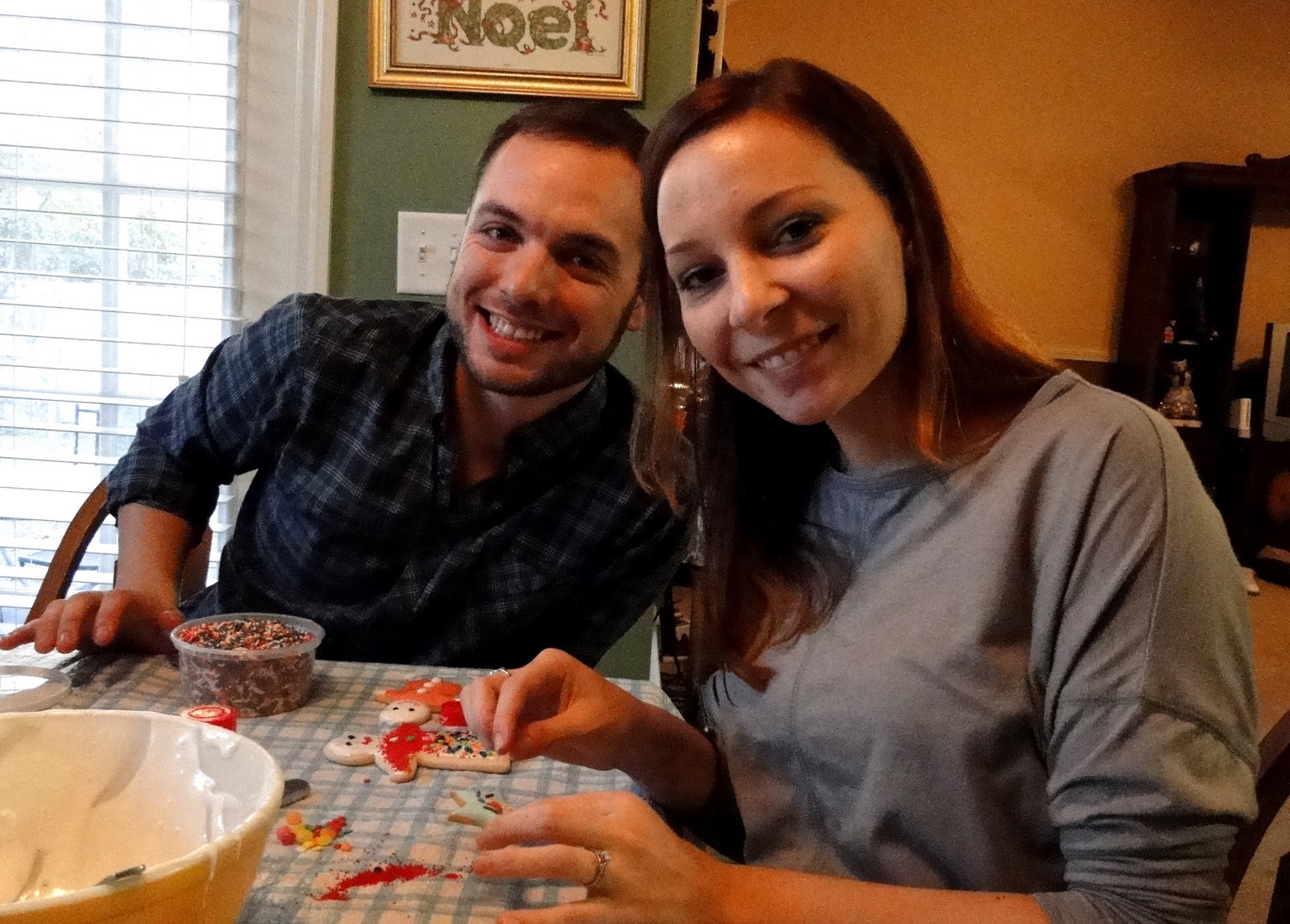 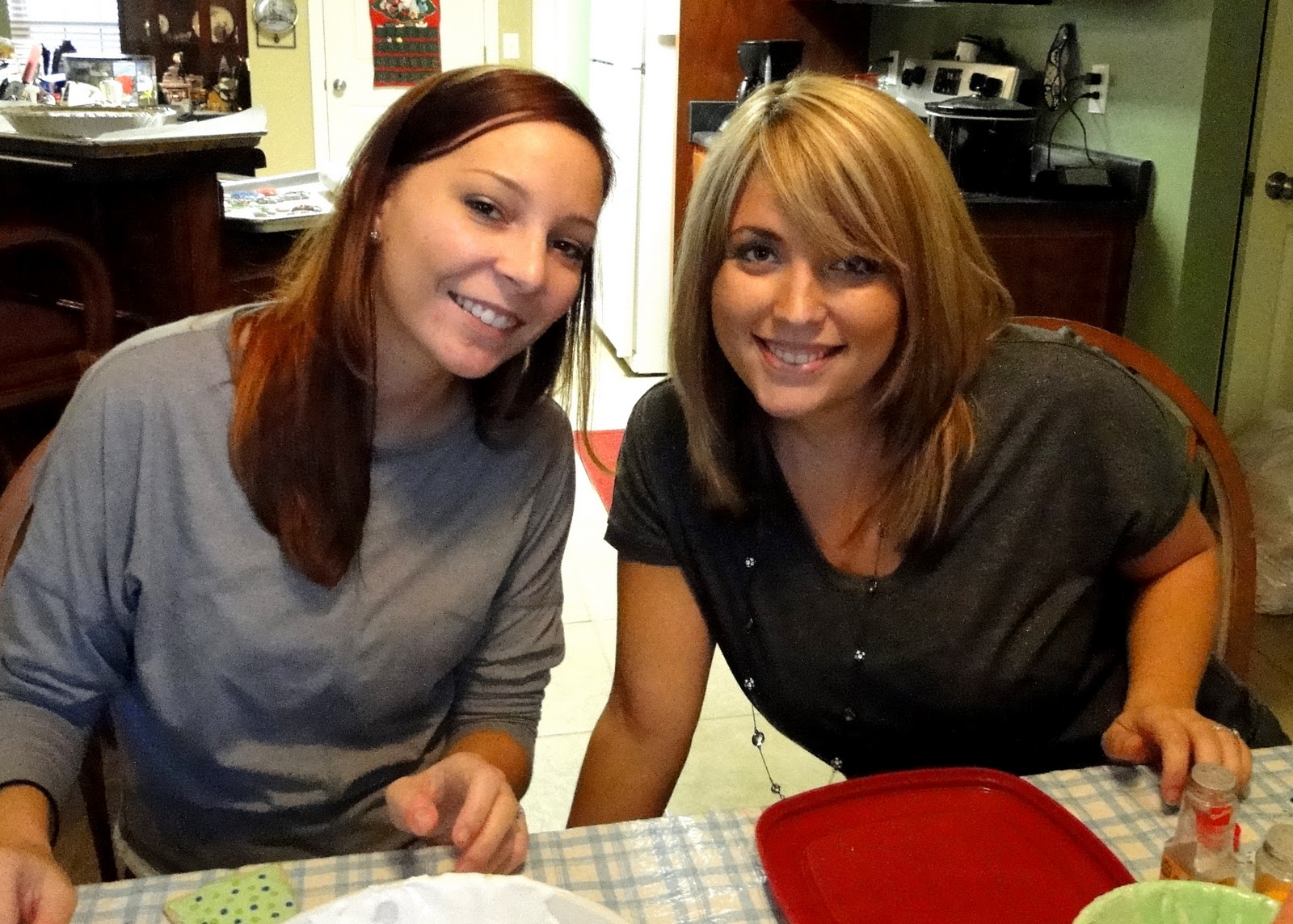 I’m glad I got to participate in some of the decorating…I was able to do a few cookies, and help Kye do a few, before Brittlynn woke up hungry. I knew the craziness from the photo shoot would result in an early feeding and it was okay. I REALLY don’t mind to nurse places now, the only annoying thing is when men are present because then I have to cover up. I have a cute hooter hider (thanks Crissy!!!) but Brittlynn gets so hot under there and it’s harder to keep her awake, switch breasts, etc. I prefer just to let that junk hang out and not worry about it, but I can’t do then when there are guys in the room other than my son and husband! So it can be annoying! 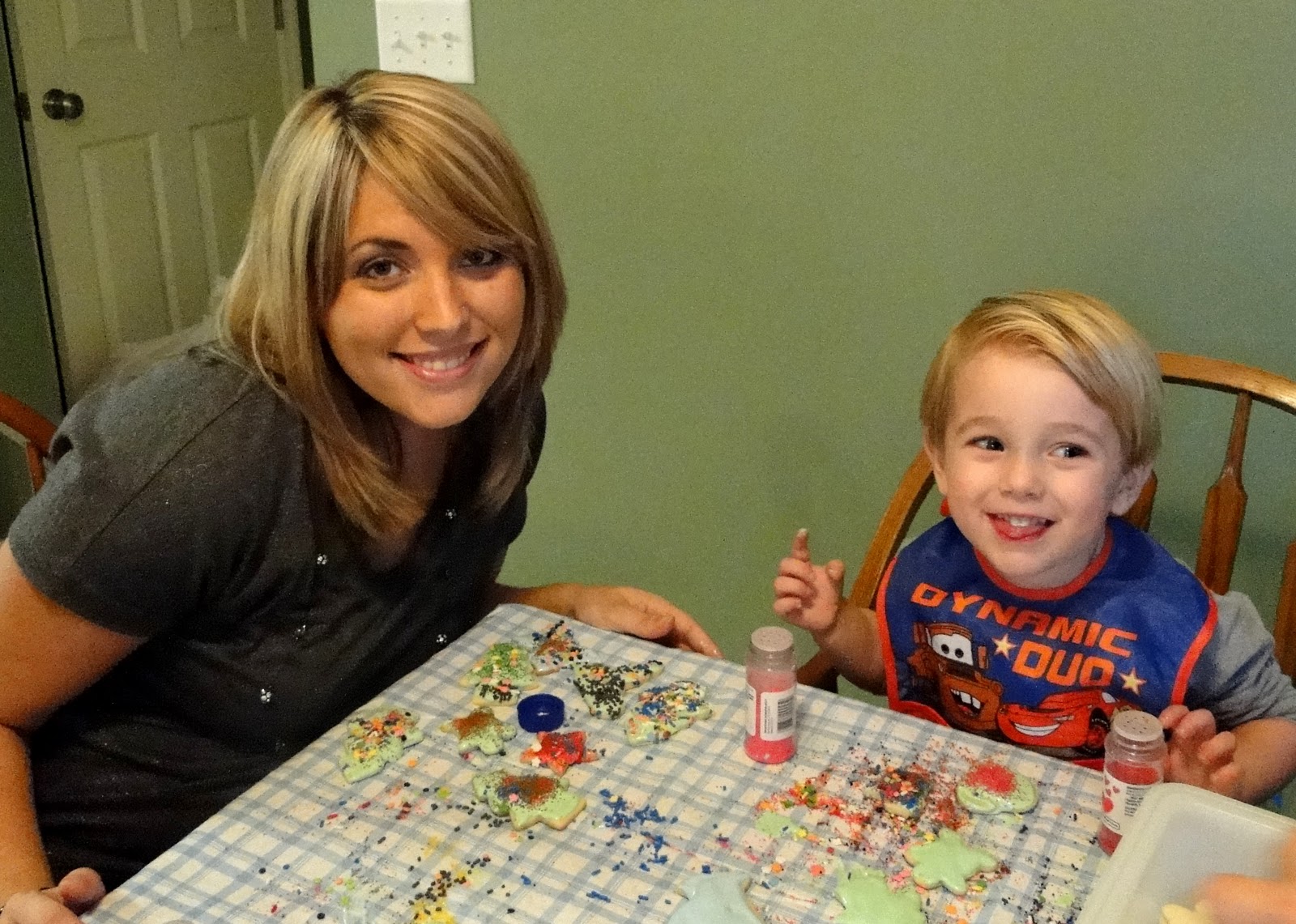 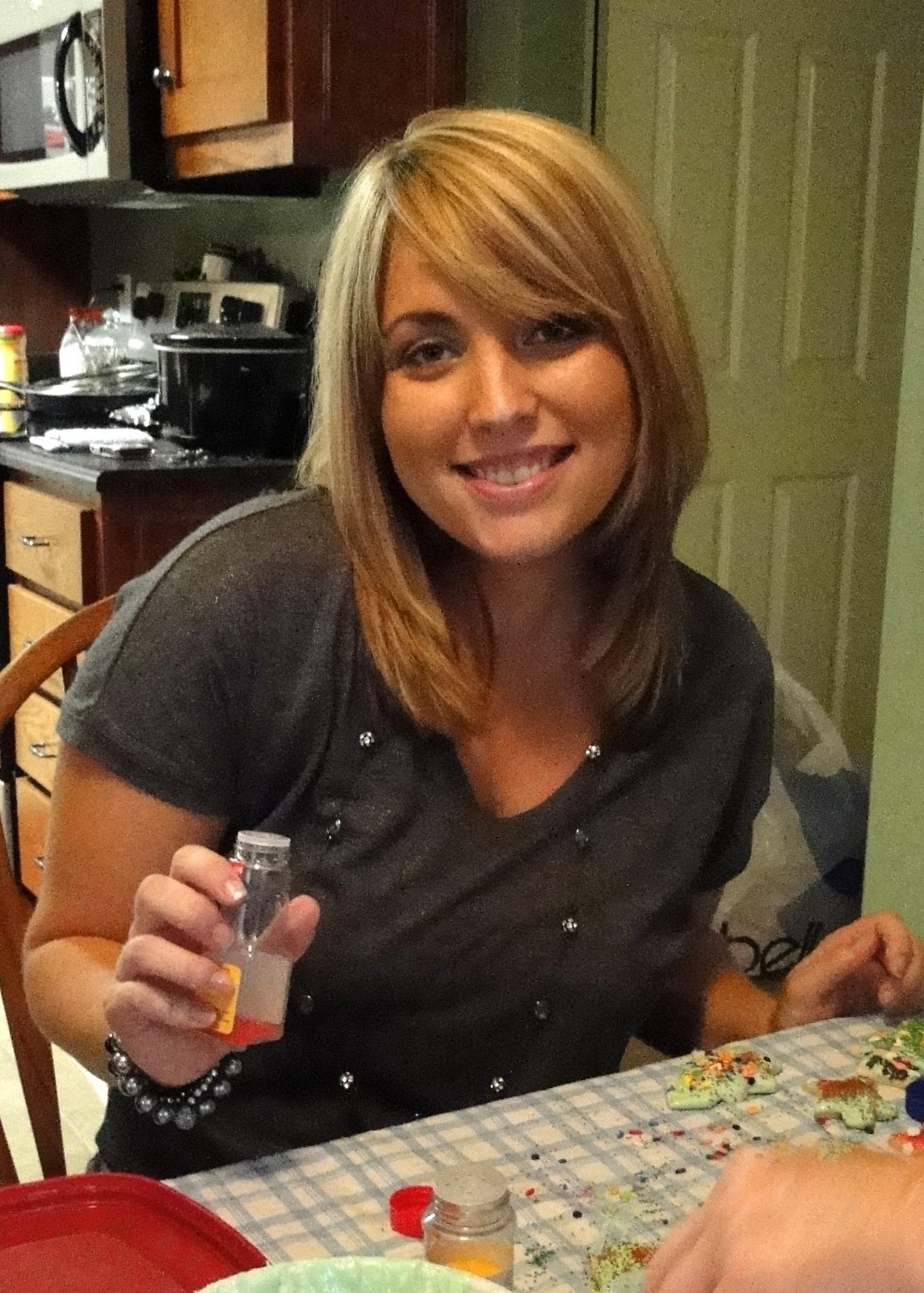 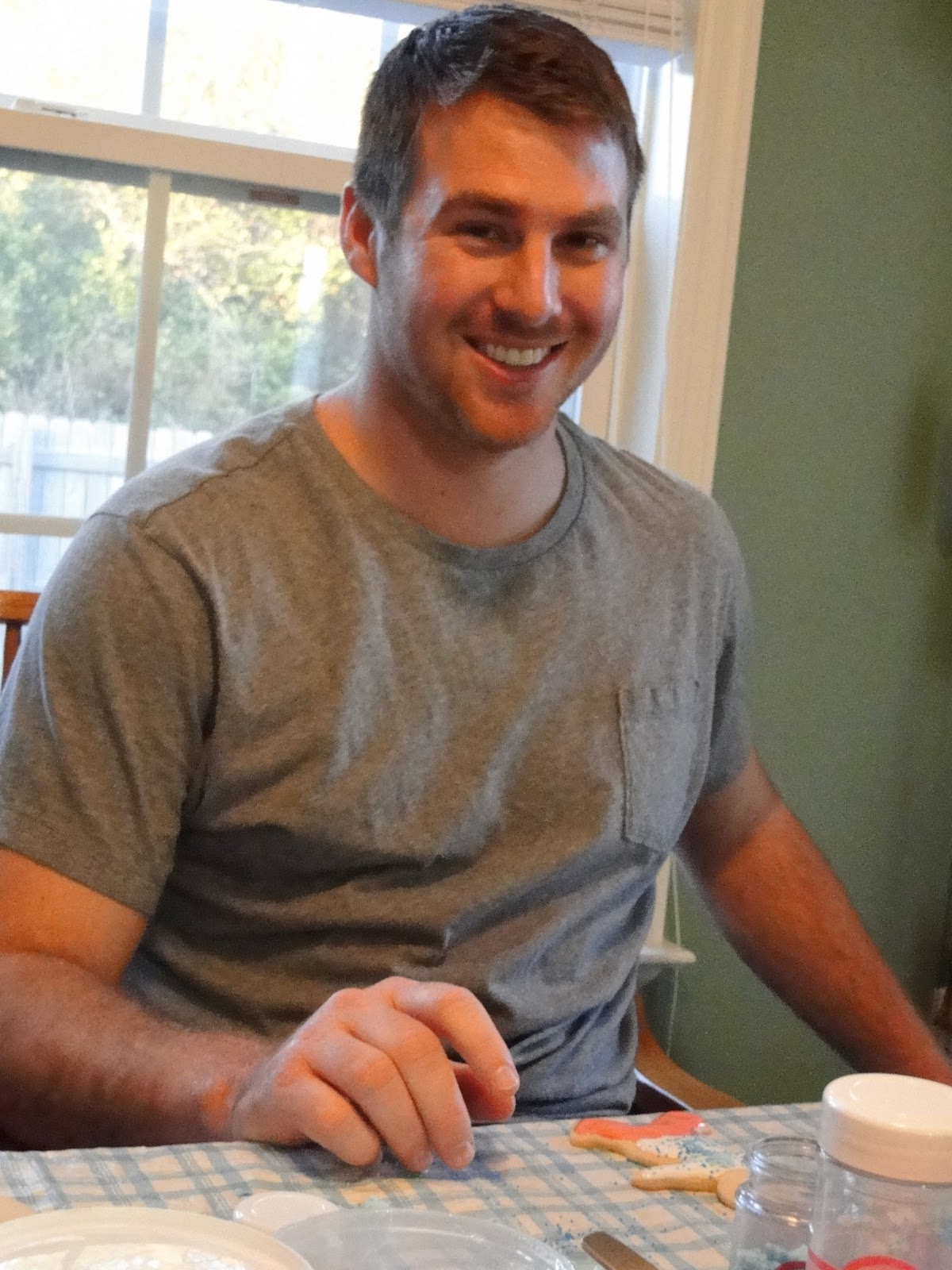 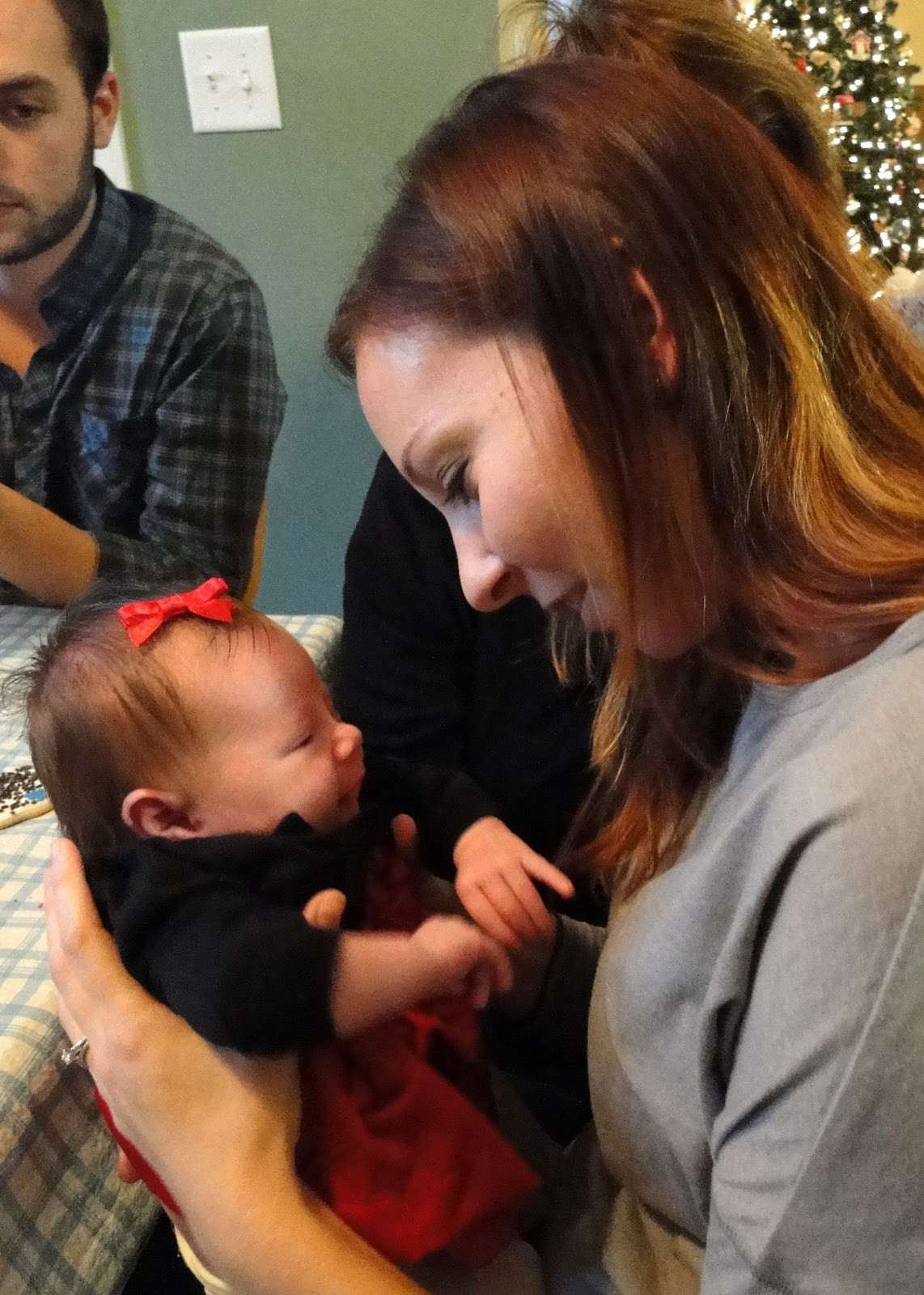 I pulled up a comfy chair and let her nurse while I watched everyone decorate. Kye got into it and he didn’t really have too much supervision (don’t let the three adults at the table fool you haha) so he ended up eating about as much as he decorated and several things of sprinkles quickly got empty 🙂 He had a blast though and that’s what matters! He rarely gets to see his aunt and uncle and I’m glad he got to have a good, although brief, memory together with them! 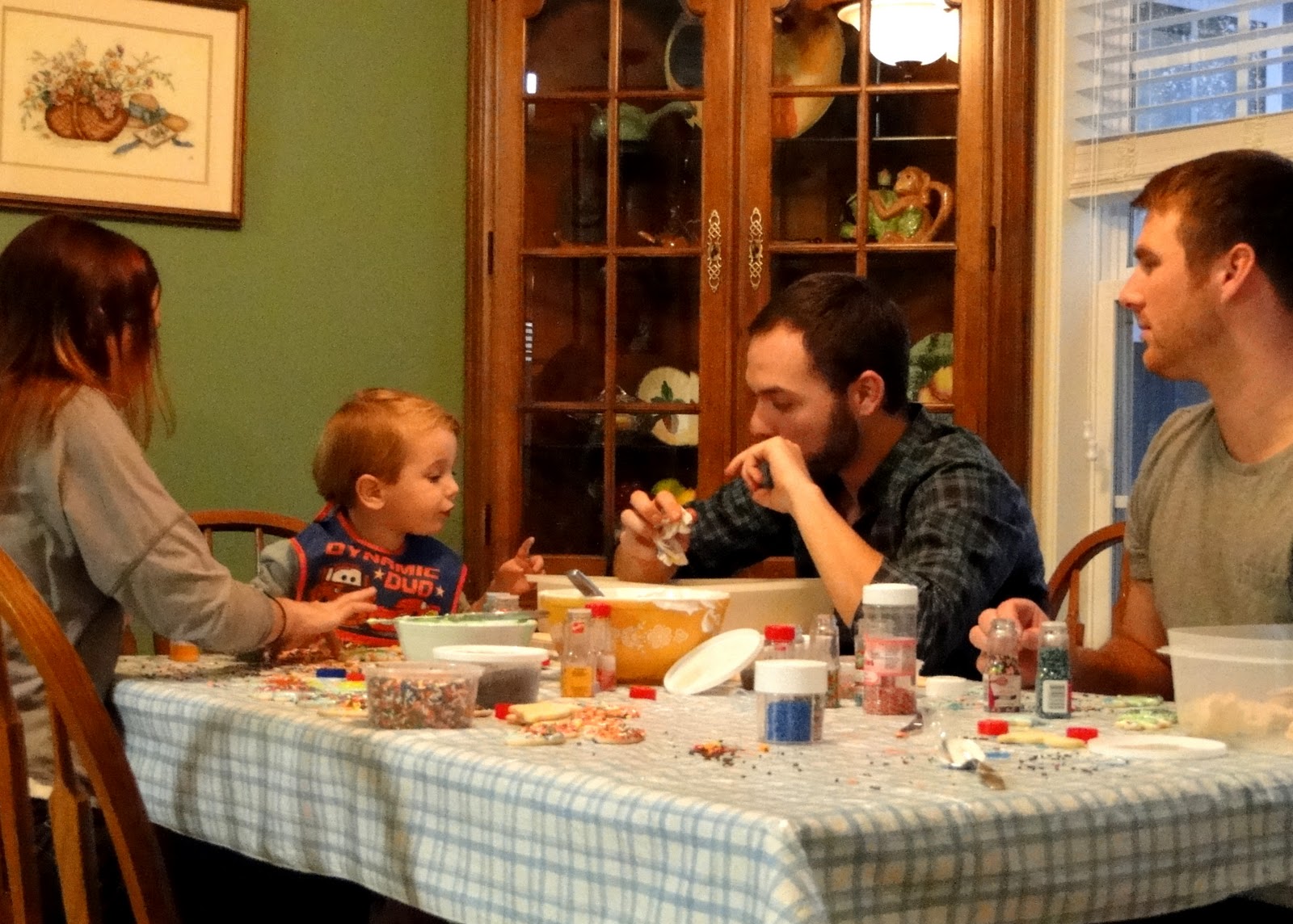 Everyone sat down to dinner and I was, shocker, still nursing. Once she finally got done eating I ran over, interrupted them from eating, and told Brandon I wanted him to get to hold her before she fell asleep. They were at the hospital when Kye was born so we have lots of pictures of them holding him as a newborn, but they didn’t meet Brittlynn until that night so I wanted a couple cute pics to remember the event by! 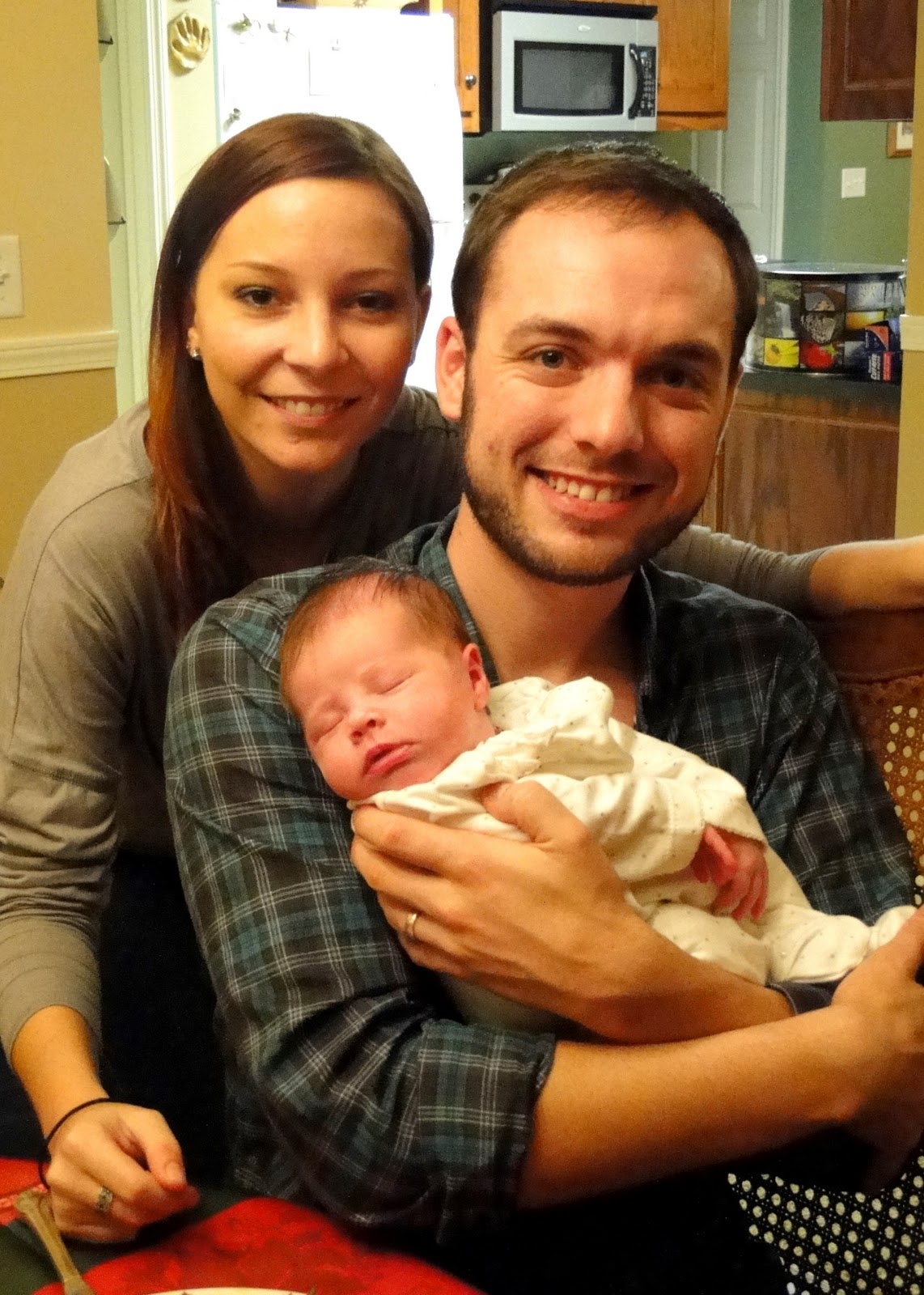 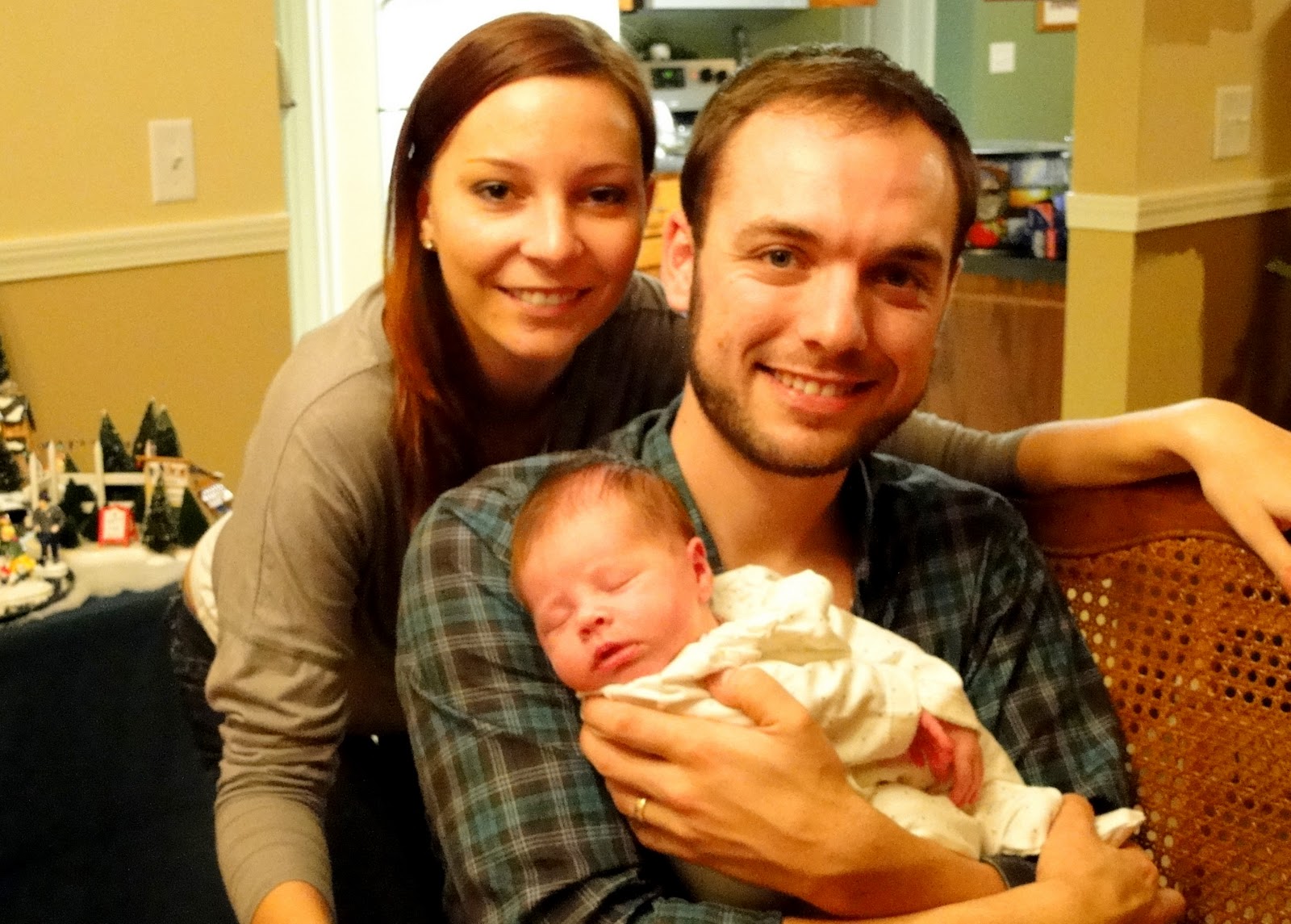 Kye wanted a picture too, of him with his beloved bread of course 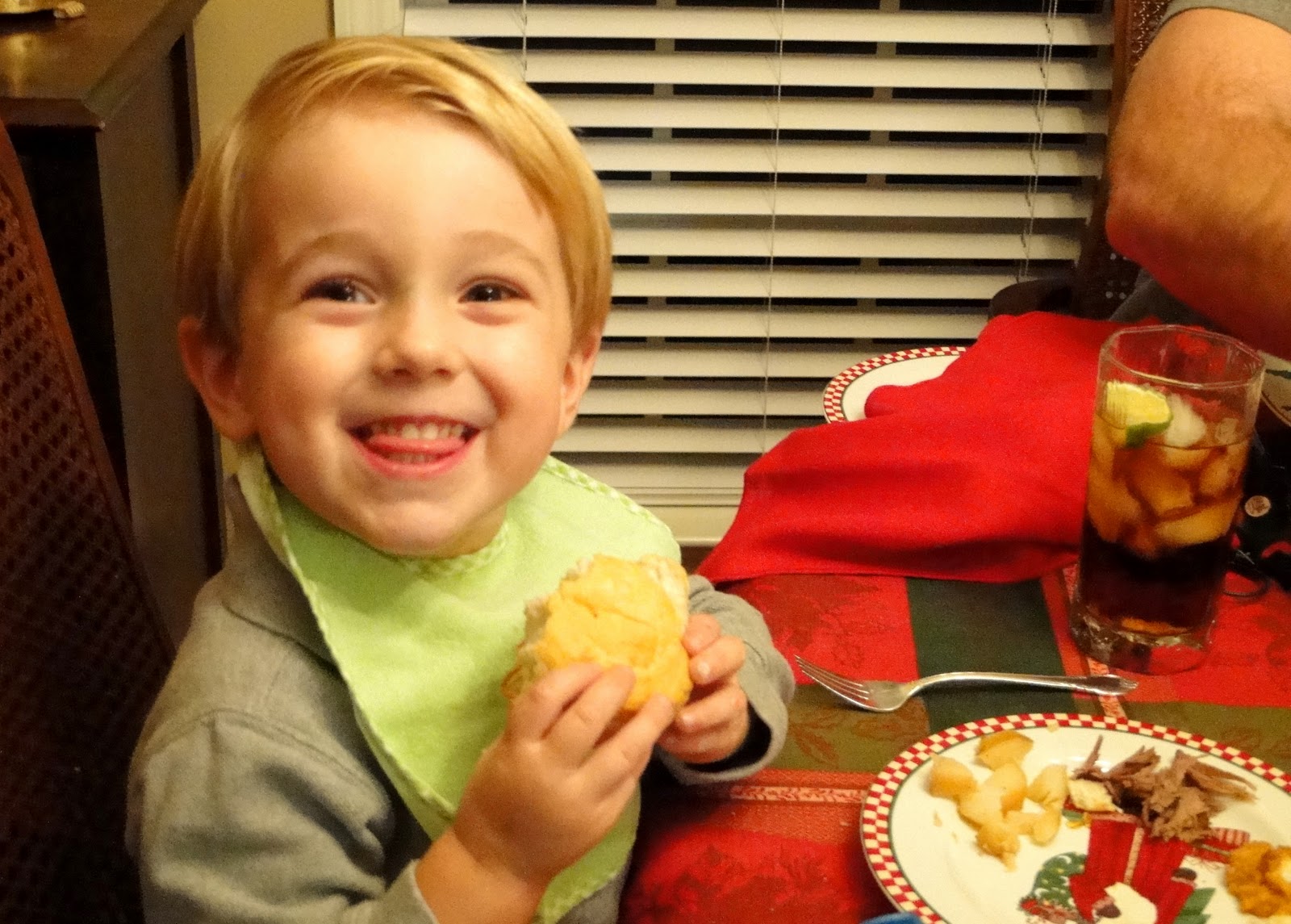 He wanted cookies for dessert so we gave him a plate of ALL the ones he’d taken one bit of. It was quite a few cookies! I was sneaky and took bites of them all when he wasn’t looking, trying to get rid of them so he wouldn’t have so much junk food. Luckily, he even got his fill before they were gone and we brought them home for him. He carried those things around like they were GOLD and kept opening the wrapping just to look at them haha 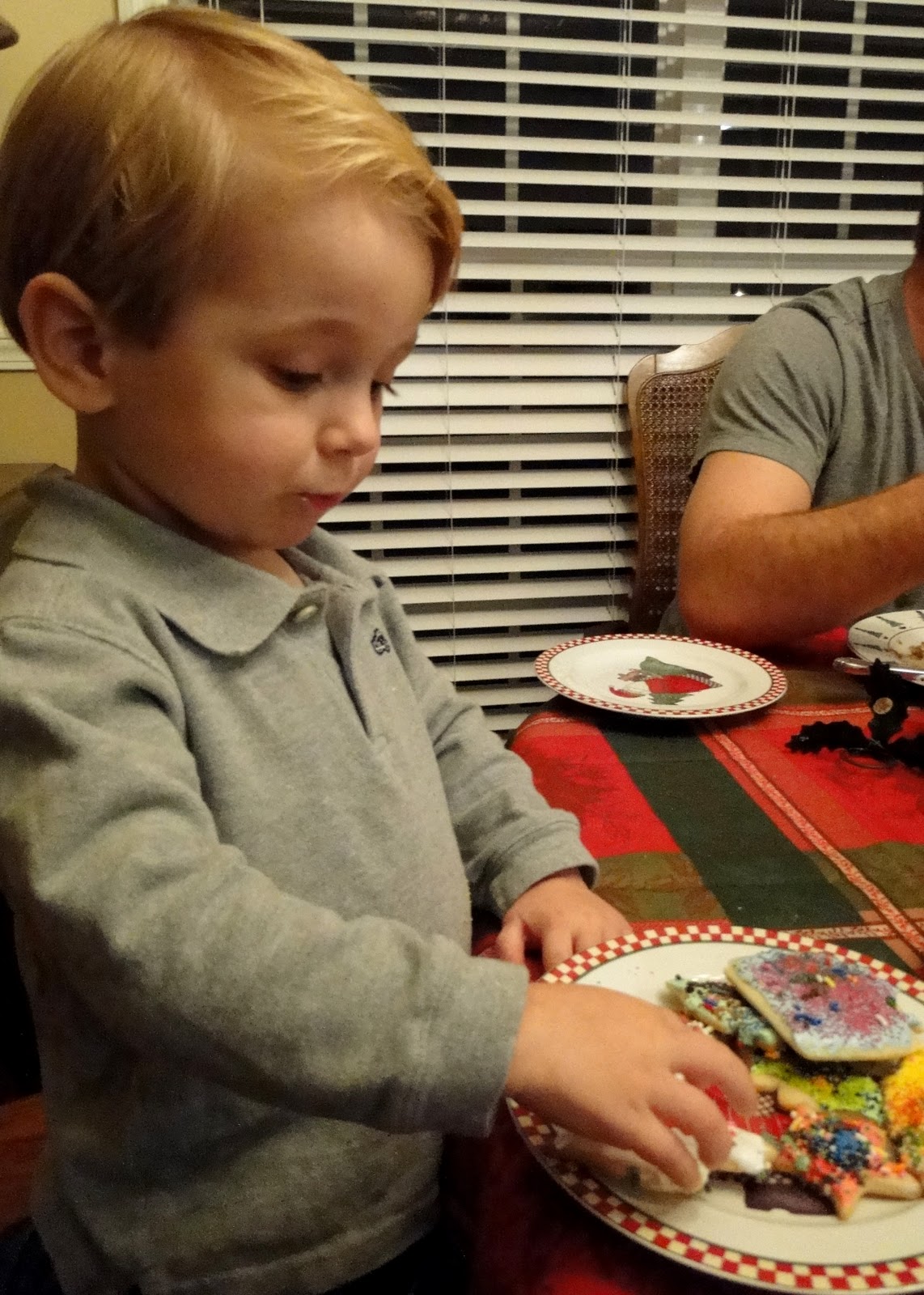 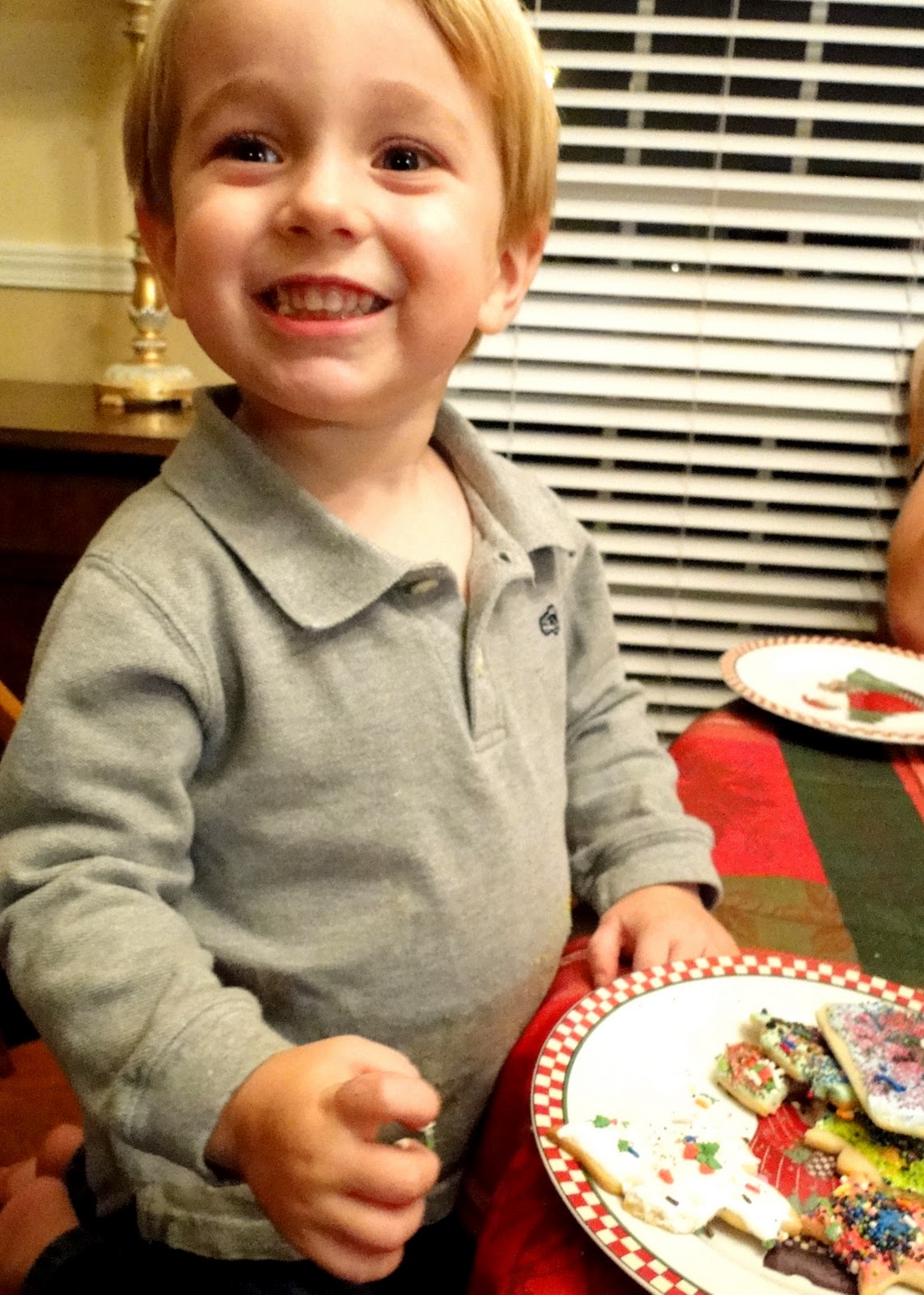 Since we weren’t seeing them for legit Christmas, and Mom had exchanged gifts with them that morning during their Christmas together, we went ahead and exchanged gifts before we headed home. Kye has seen presents under the tree but has never attempted to open them and he couldn’t believe he was getting to open something!!! 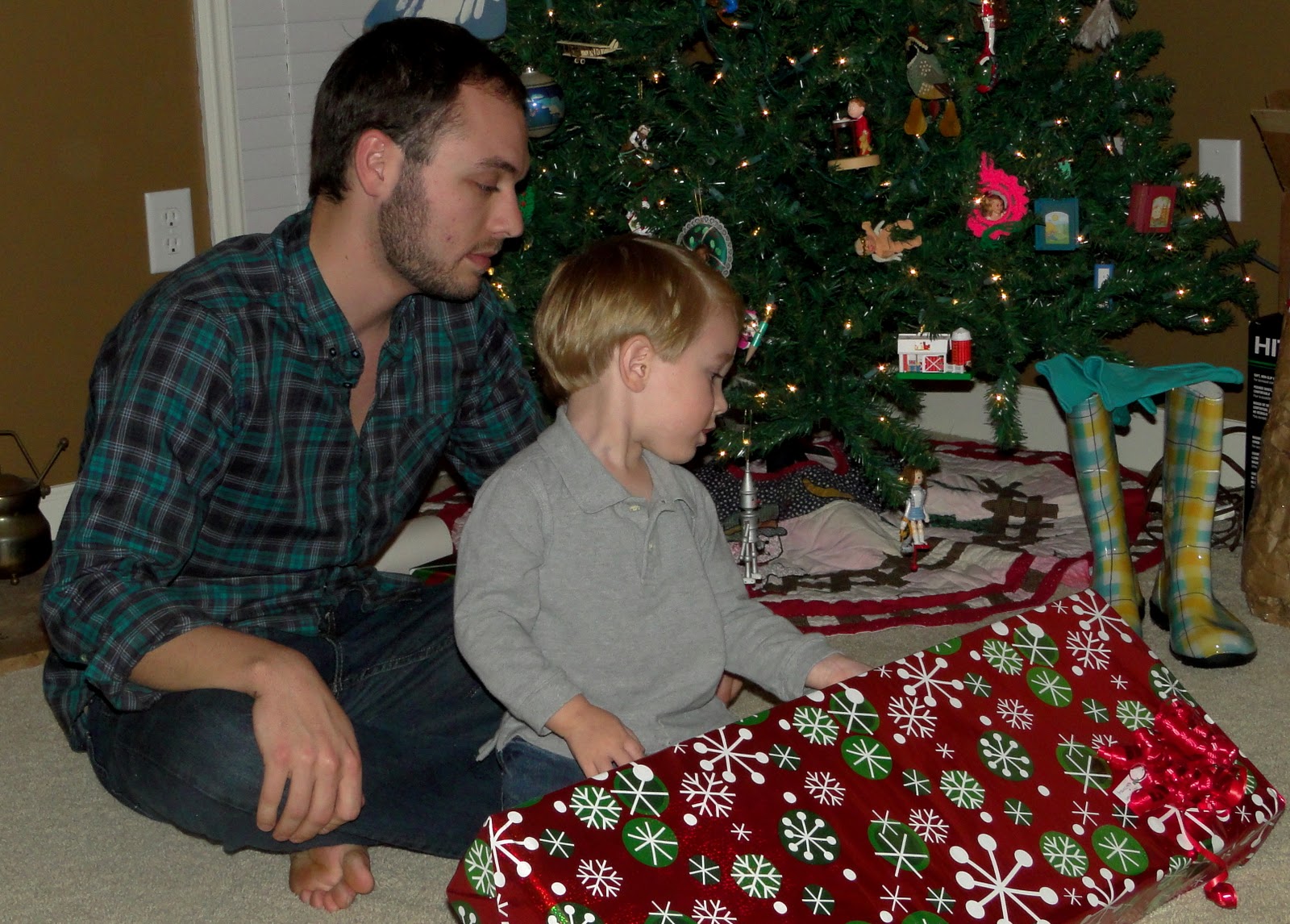 He loves this airplane thing…it’s some thing where they land on it in water? I can’t remember what it’s called (I may have a son, but I’m still a girly girl haha) 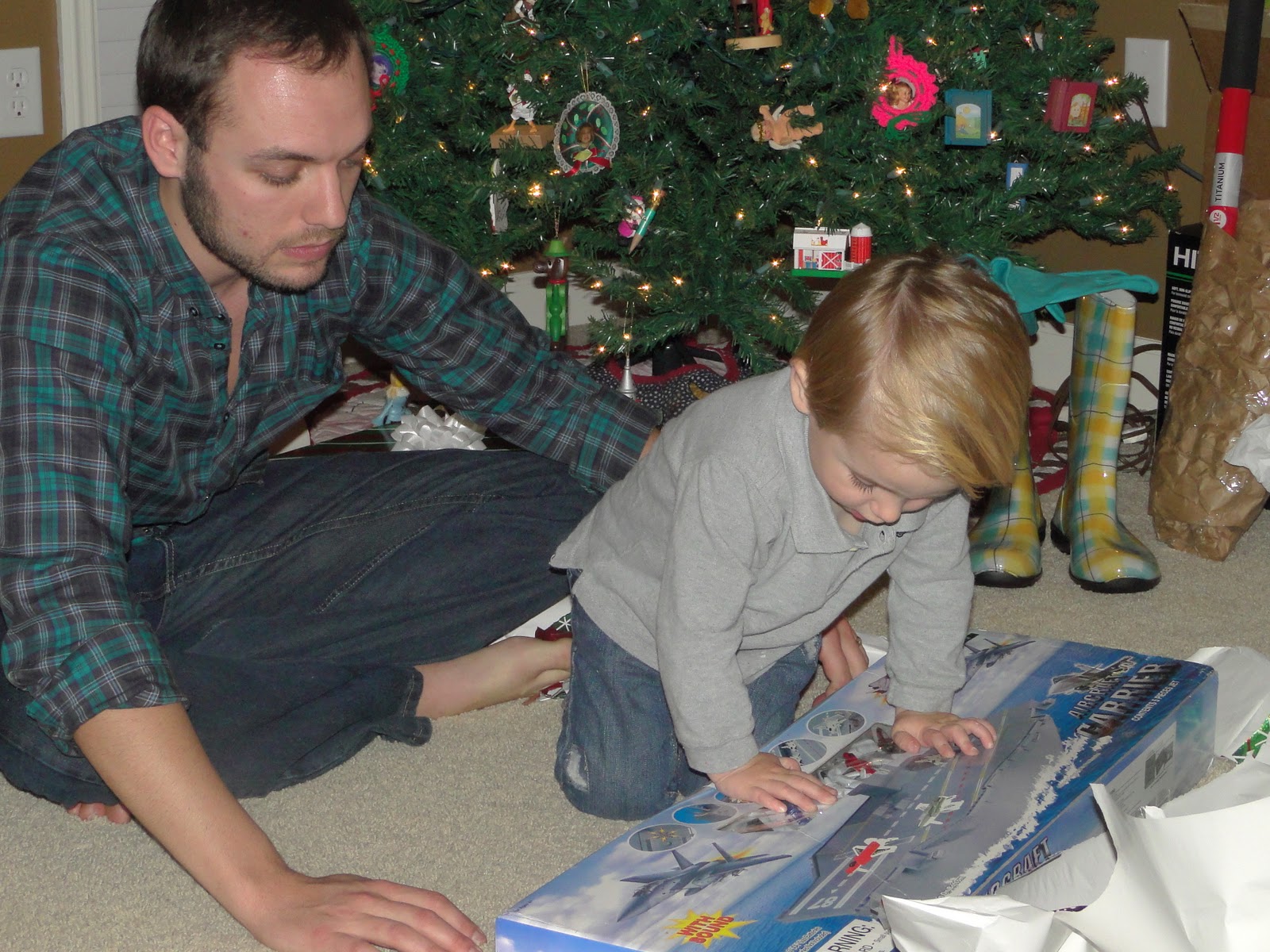 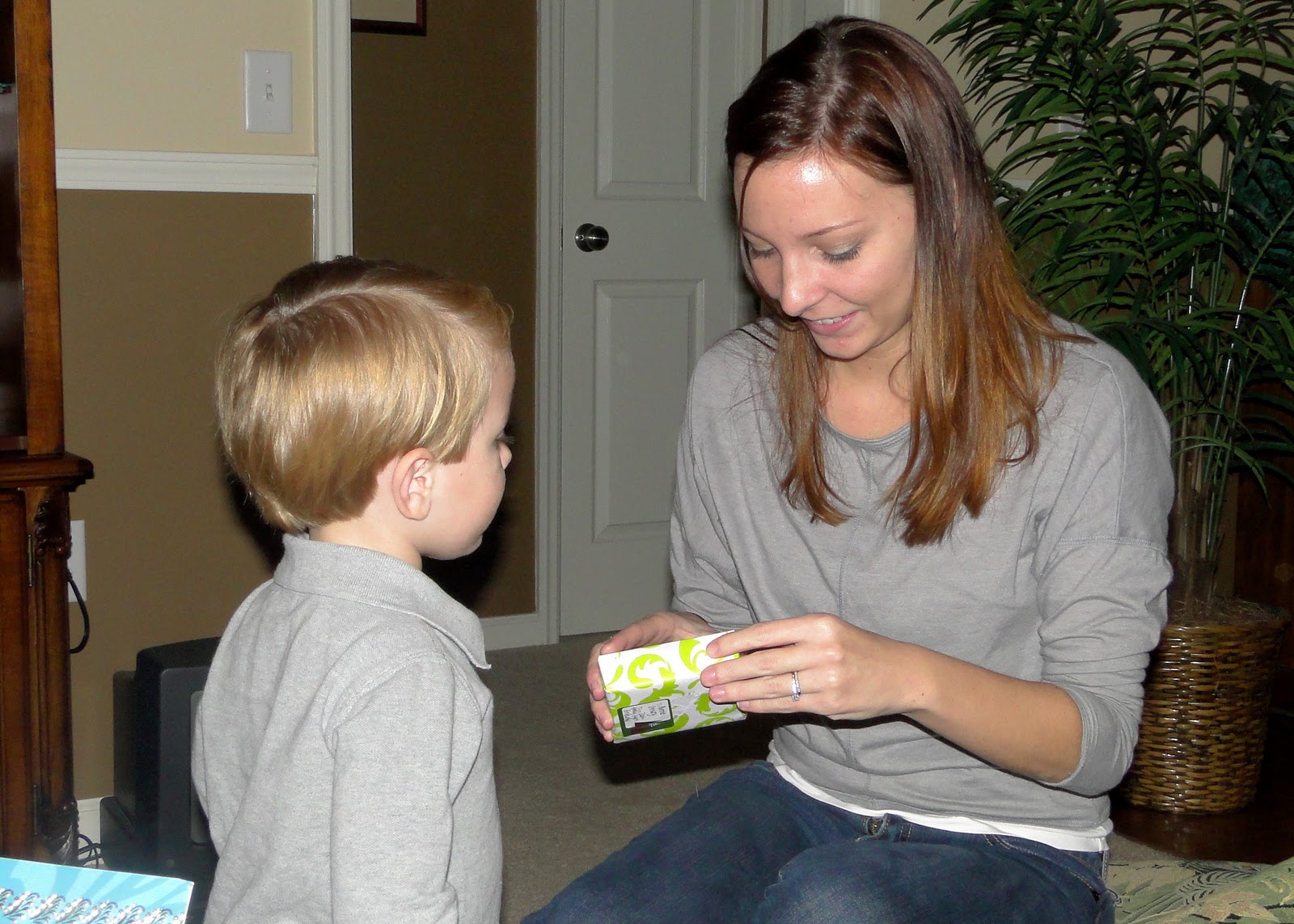 We got Brandon an orange Express shirt and Gator tie! 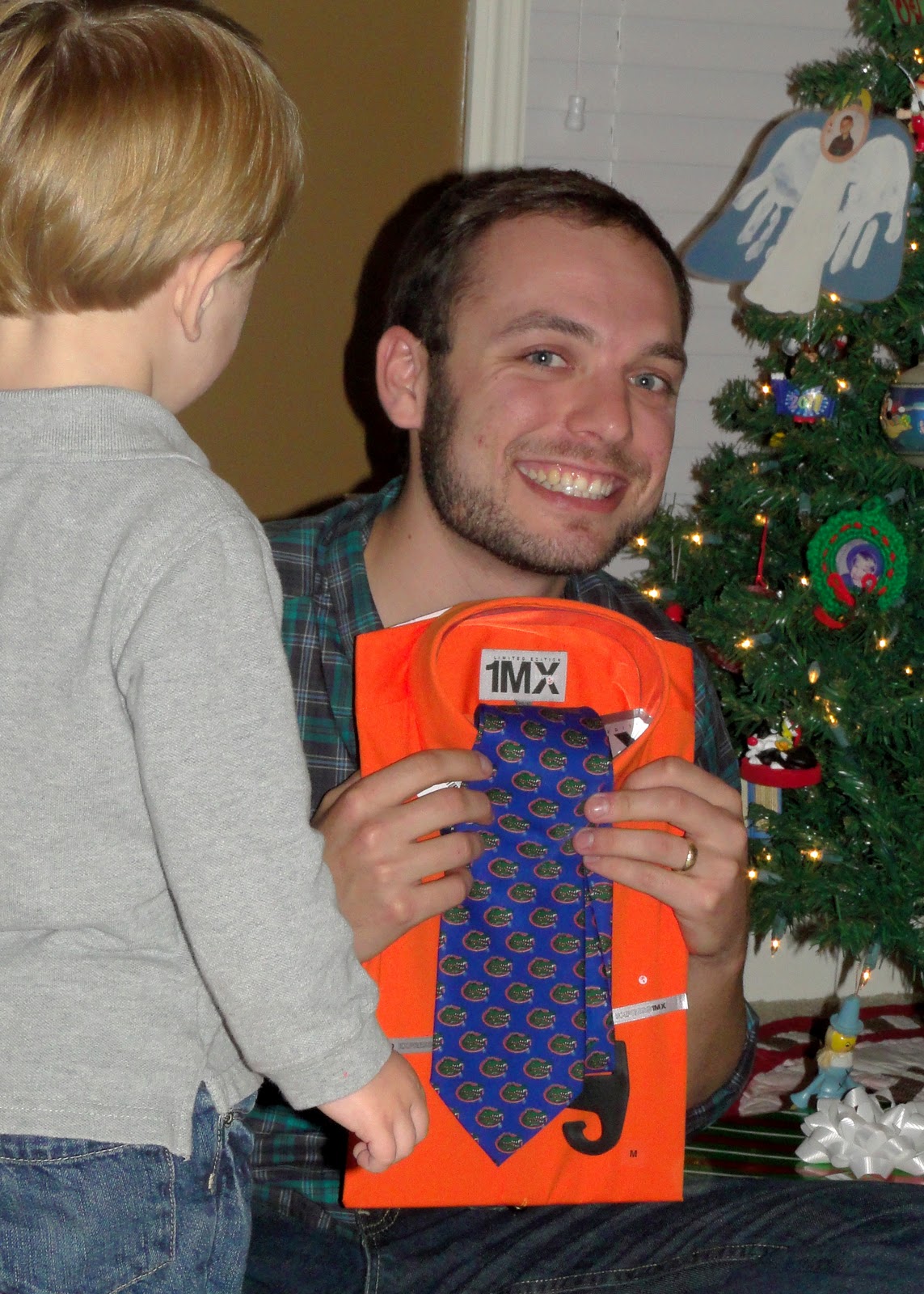 It was a short visit but I’m glad we got to see them and that they got to meet Brittlynn. I don’t think Kye had even seen Brandon since over the summer so it was a good reminder to him of who they are so he won’t forget!

It was a CRAZY busy weekend…I didn’t blog about it (b/c I was so out of it and didn’t take pictures) but the night before we had Christmas at Mema’s house. Then Sat we had the photo shoot then went to Mom’s. I was WORE OUT. I literally was falling asleep at Mom’s house and don’t remember much from that weekend…having a baby around the holidays was tough b/c there was SO much going on and I wasn’t quite to the point of healing to really handle it all. Thankfully I got in a better groove of things by real Christmas!!!