Courtney turned the big 3-0 this year and everyone wanted to go all out for her special day! Casey came up with the idea of surprising Courtney somehow with Carrie Underwood tickets. When she first asked me if I’d be interested in going…I turned her down. Haha. I LOVE concerts but, legit, know ONE Carrie Underwood song (that one about digging her key into a dudes truck) and wasn’t really sure if it was worth going to. But I had already missed out on their girl’s trip back in March and didn’t wanna miss out again, plus I knew it would be a BLAST!

Brad set up a surprise lunch for Courtney at a local restaurant, Two Friends. She thought it was just their little family going ot eat but when they walked in ALL of us were there! It was a pretty large crowd and we all yelled SURPRISE! I’m not sure if she was too shocked that we were there? But when it came time for the gift opening she was DEF shocked. Casey and I went in on an outfit for her and Mrs. Charlotte got her a couple outfits so we labeled each gift “option 1” etc as in options for what she’d wear to the concert! Then Brad’s gift was a Carrie Underwood cd and the concert ticket. It took her a minute to figure out what the heck it was haha but then each of us girls held up our ticket and said “I have one too!” and she was SO excited 🙂 I really wish I had a video of it! FUN surprises are such a rare thing and it was neat to get to see her so happy like that!!!

The kids got their OWN table for the first time and did awesome! 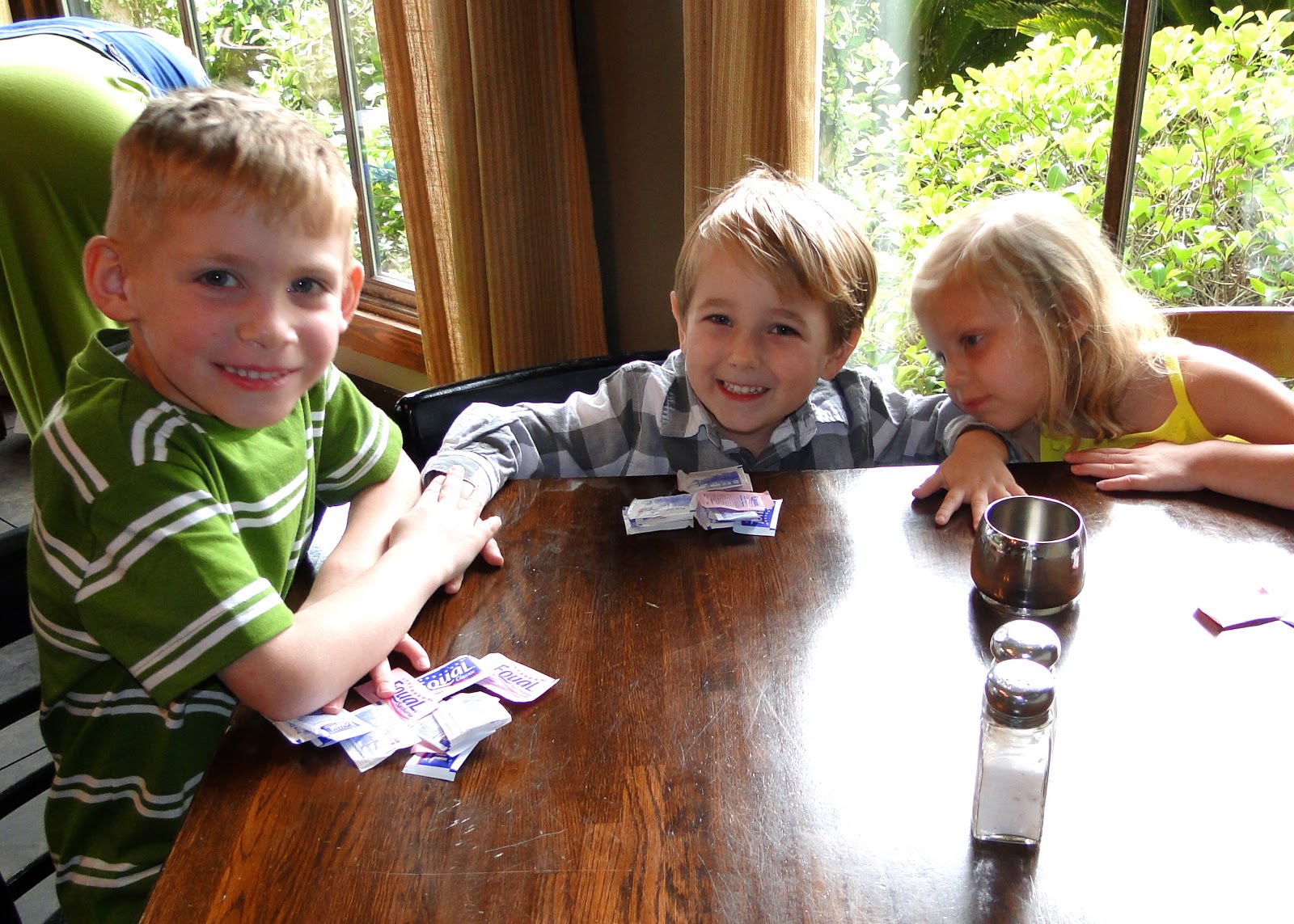 We left right from lunch and ran by Courtney’s house so she could change. The concert was in Jacksonville which is a two hour drive for us and we wanted to get there in plenty of time to get dinner before the show. It was a fun ride down and the time passed really quickly (which helps when you’re not the one driving haha).

I’ve been trying to learn new ways of fixing my hair. I always LOVE how it looks right when I get it done but can never fix it the same way Renika (my hair stylist) does. I am TERRIBLE at doing hair. It’s just not one of my talents. But with a lot of practice I’ve semi-learned how to curl it with a curling iron. The curl falls out pretty much immediately but the body makes it look different than my normal style, right? I mean I was all proud of it and wore it like this to meet up with Robyn one night and she said she couldn’t tell a difference haha 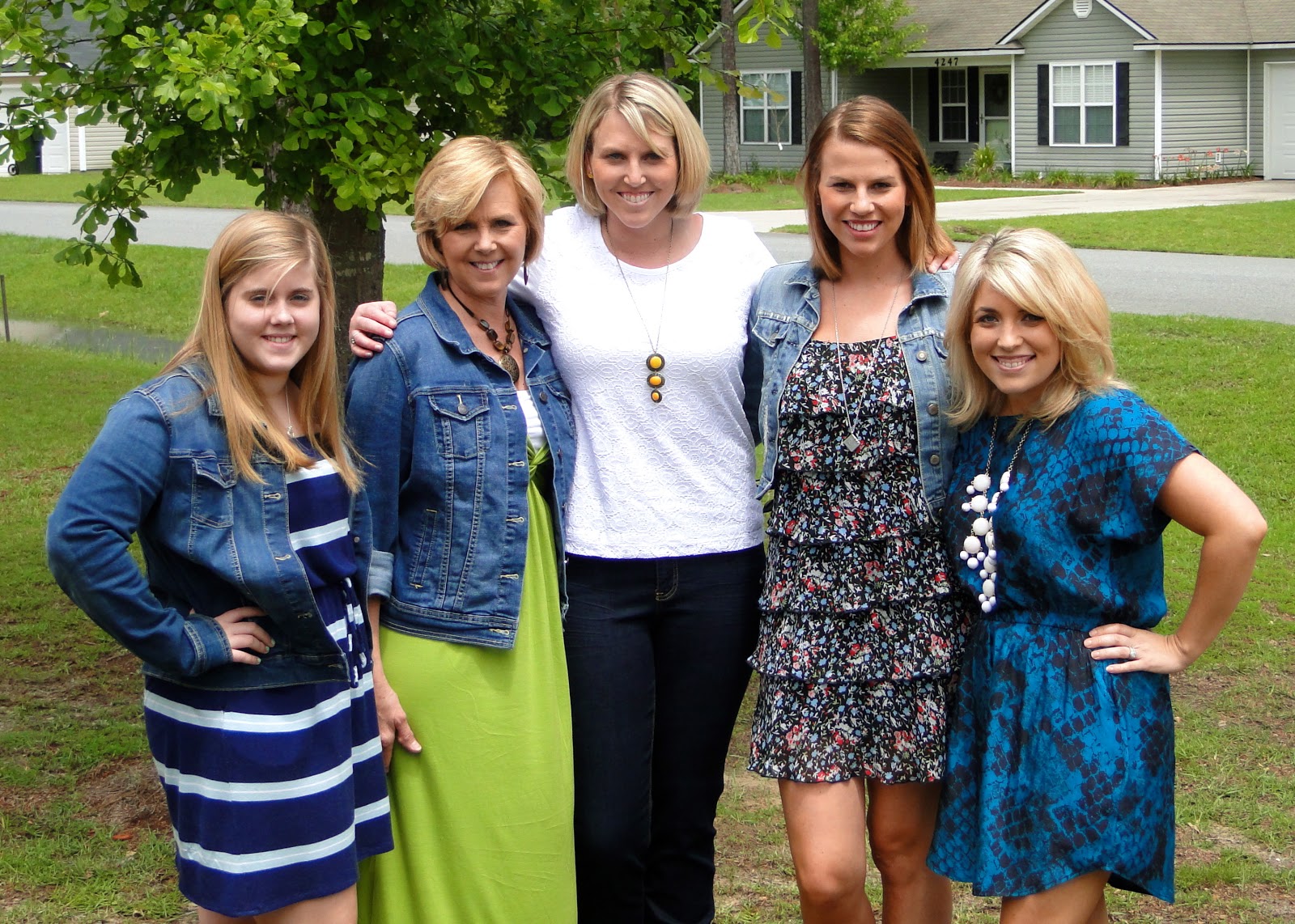 In our country gear! 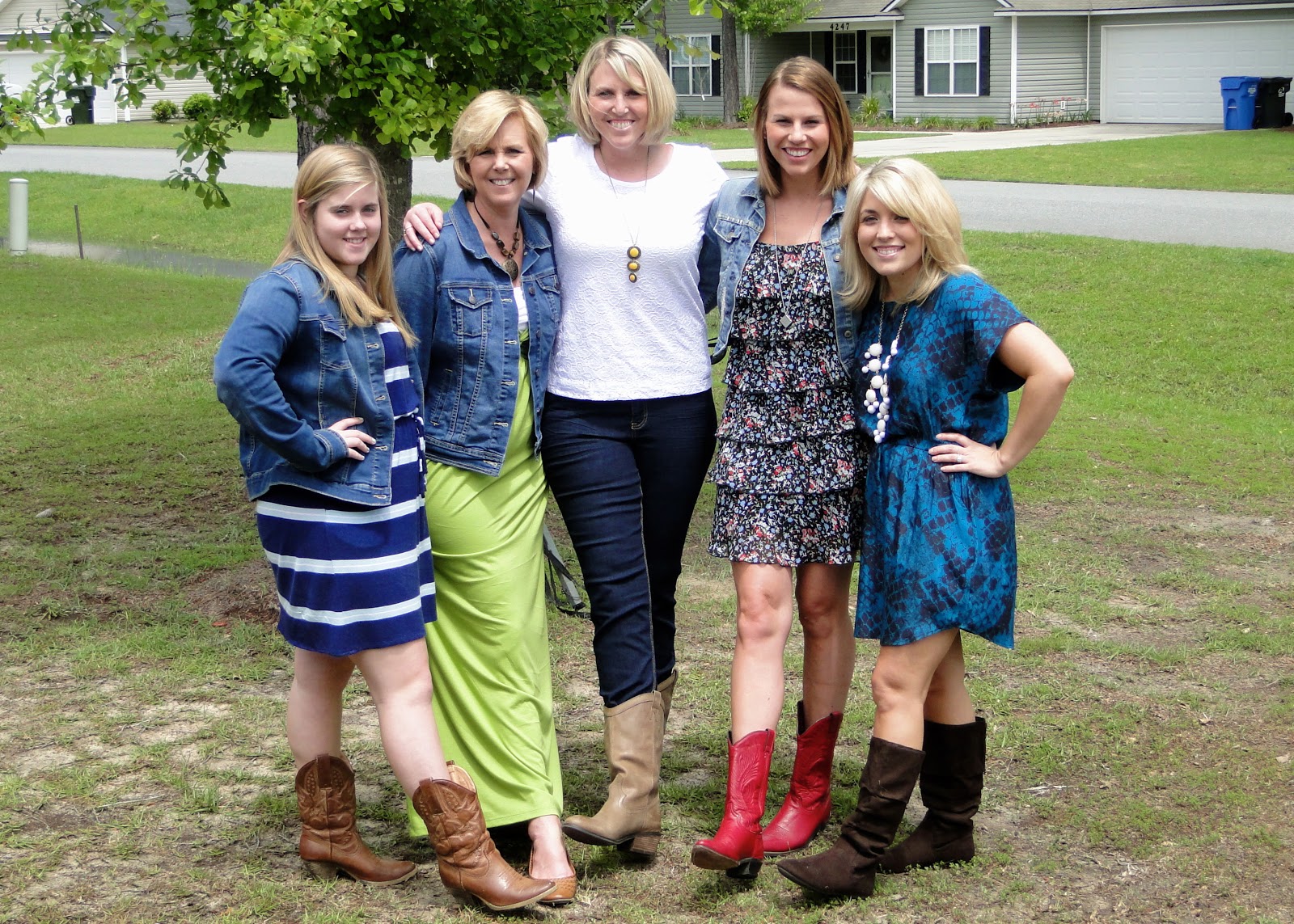 Once we got down to Jax it took us quite awhile to find the concert venue (and those Parker women will bicker over some directions…I’m happy just to stay quiet as I can’t even tell you how to get to somewhere I’ve been to a million times haha) and then we drove around to find a dinner spot. Courtney got to pick and decided on TGI Fridays which I haven’t been to in YEARS but it was actually really good!!! I love spending time with these women, we never ever stop talking haha 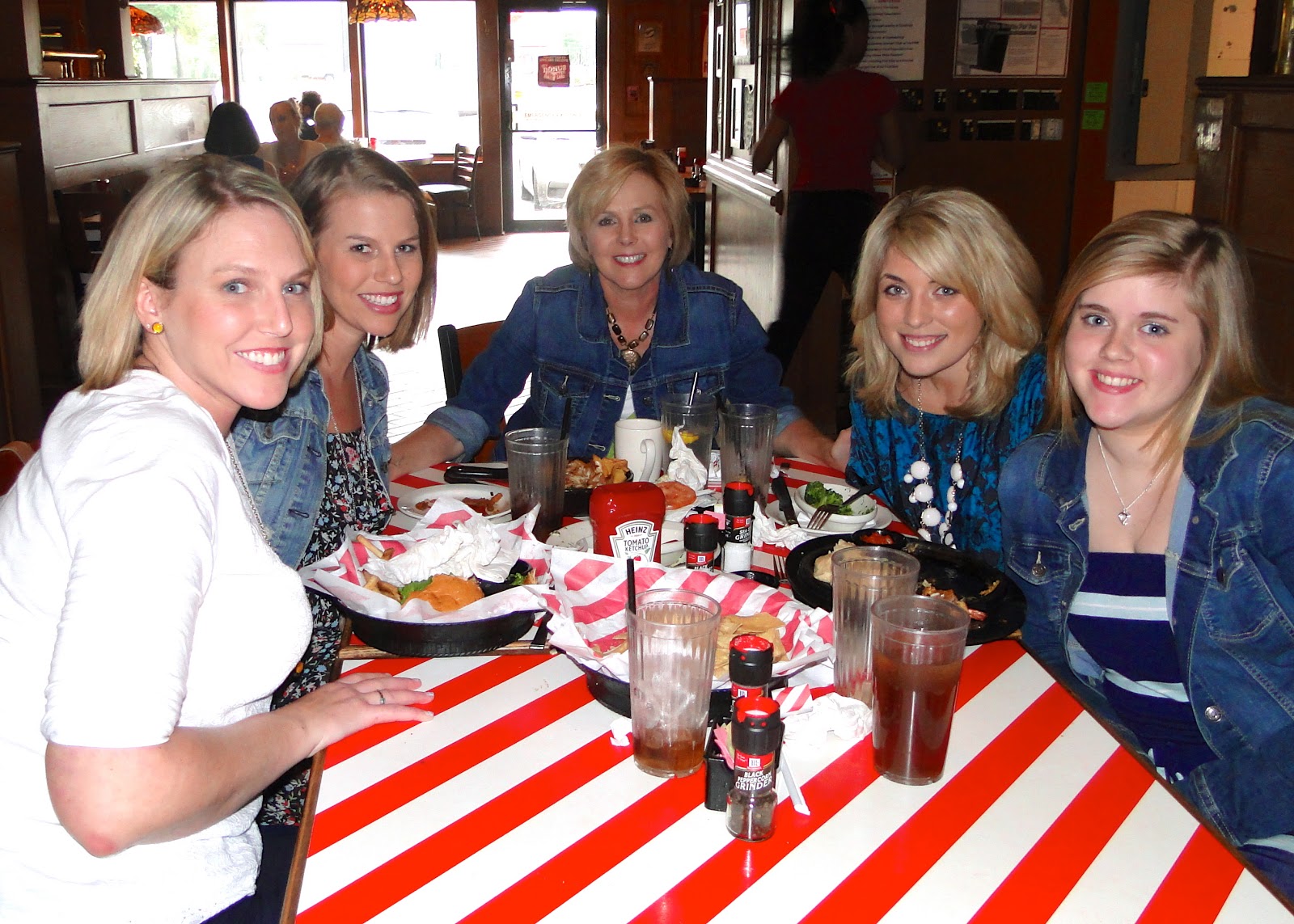 I was crunk for the show by the time we got there thanks to my pre-gaming plan…I downed my Spark later in the day than normal and took 4 ibuprofen to help with my foot. I was still only a few weeks post surgery at the time and did NOT want to wear that stupid walking boot or rock tennis shoes either. Thankfully I had bought some completely flat footed boots on Black Friday that are a size too big which worked perfectly for my swollen foot 😉

Our seats were super, mega nose bleed so we stopped midway up and got some pictures haha It was funny when we got there too b/c we had literally JUST been having a typical girly conversation about our significant others and I was saying how I feel like Zach is FAR better looking than me. Like I def married “up” in the looks department. I was saying how I rarely get compliments on my looks whereas Zach gets them non-stop everyday all day. Legit, we walked in the venue and some random guy said to me “you look like you should be a country star yourself” or something like that anyway haha! Def made me feel a little better about myself. Even if he was like 50. I mean a compliment is a compliment! 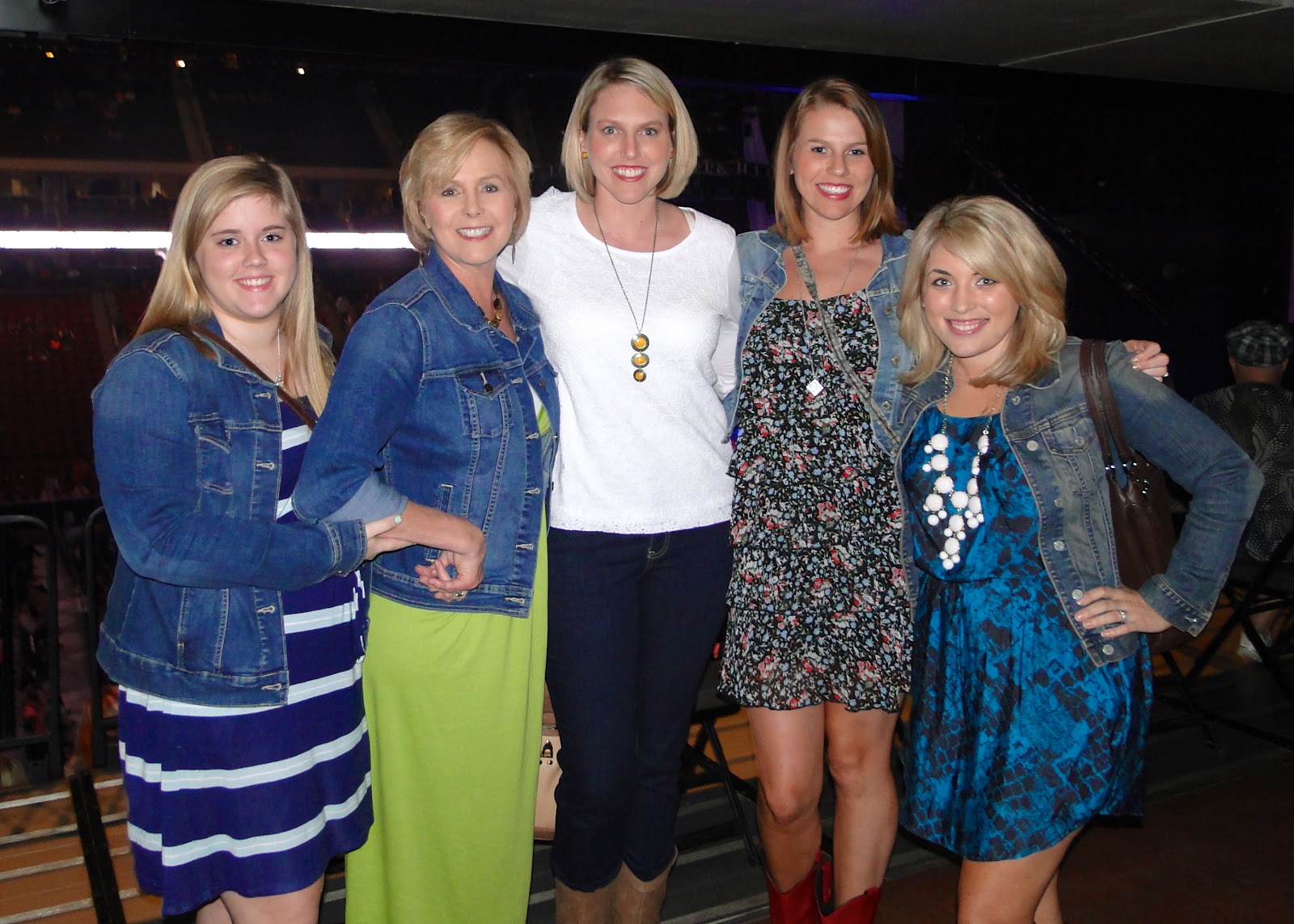 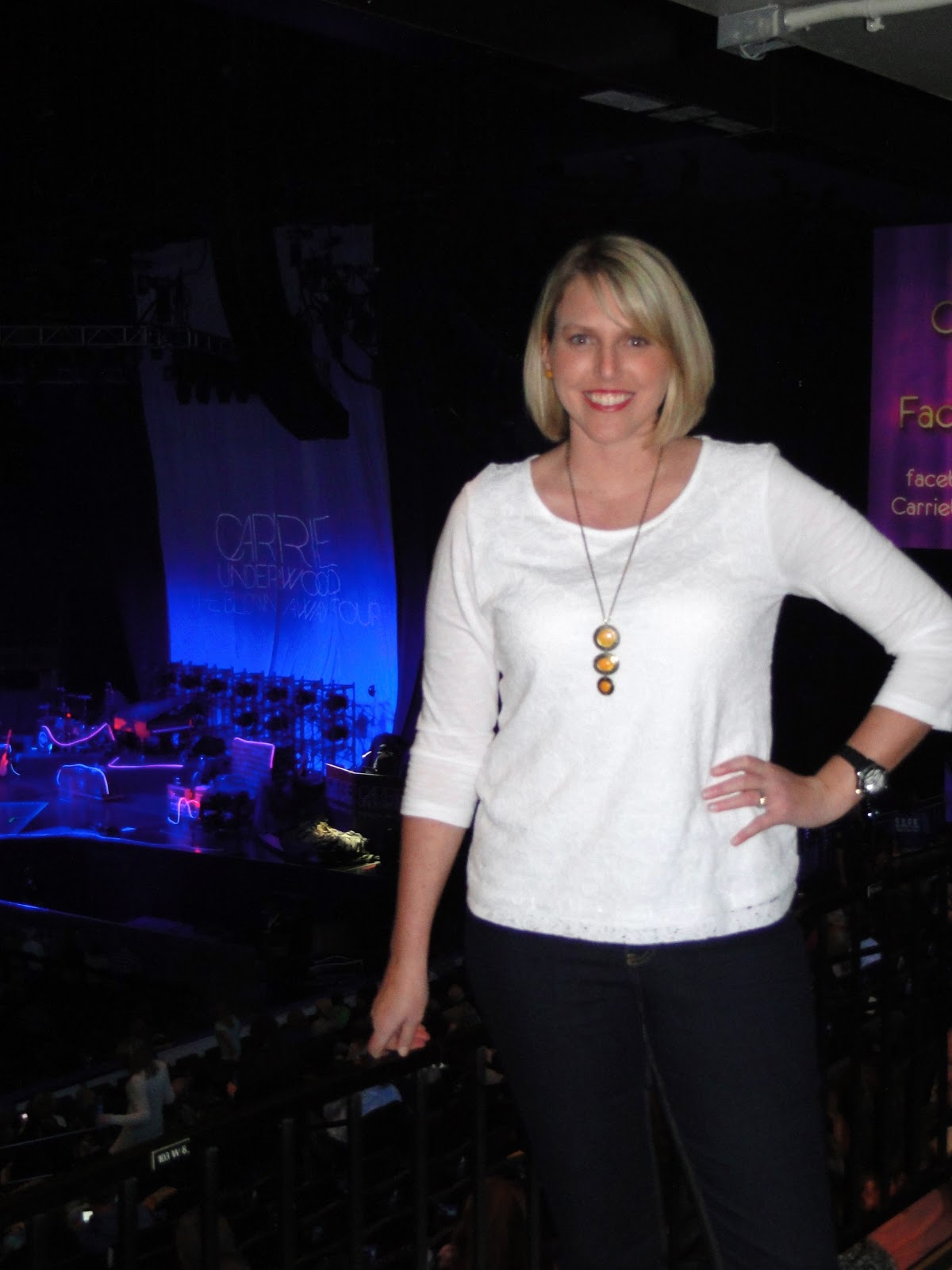 It was Jolee’s first concert and I was excited for her! 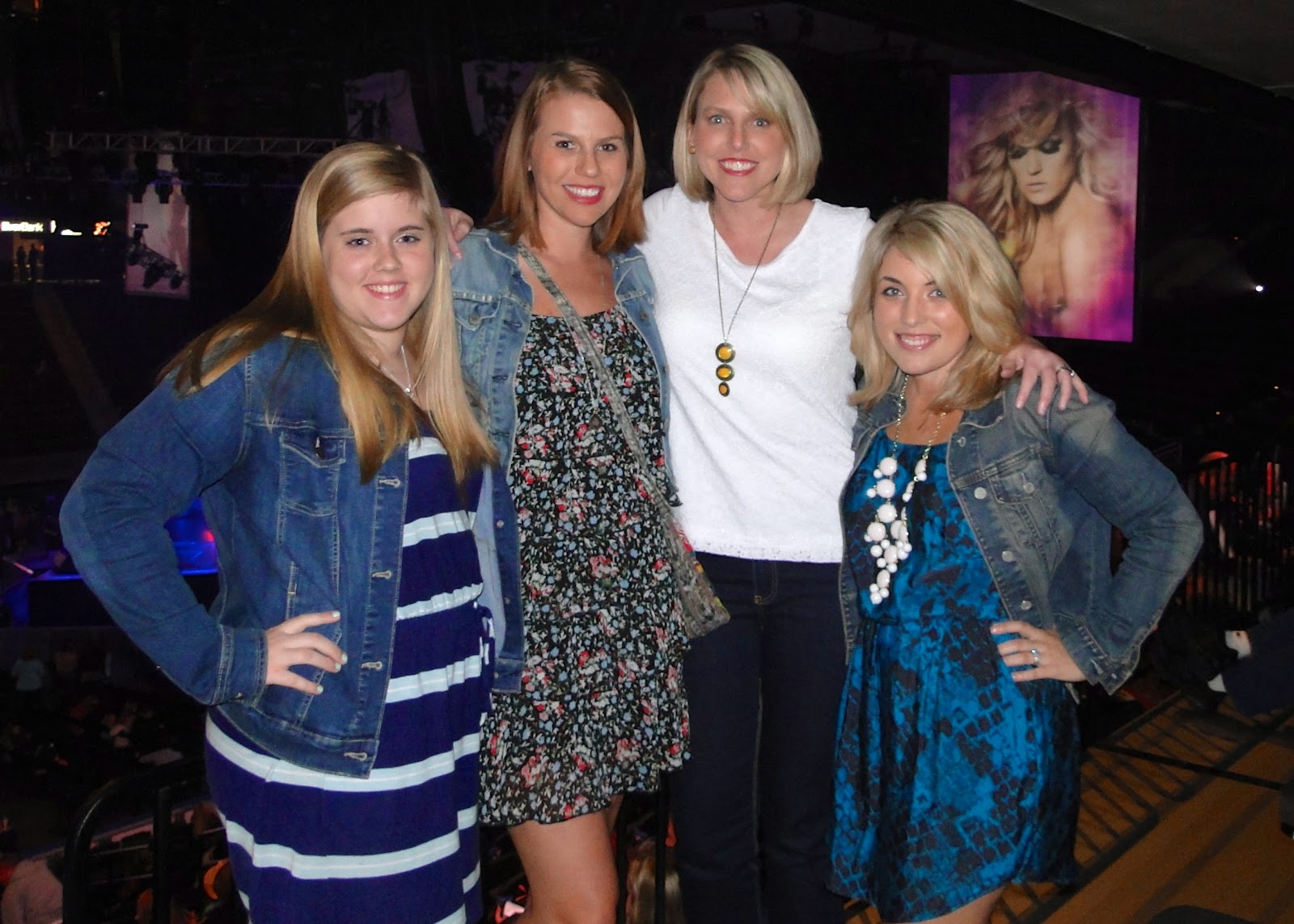 Where we stopped mid-way 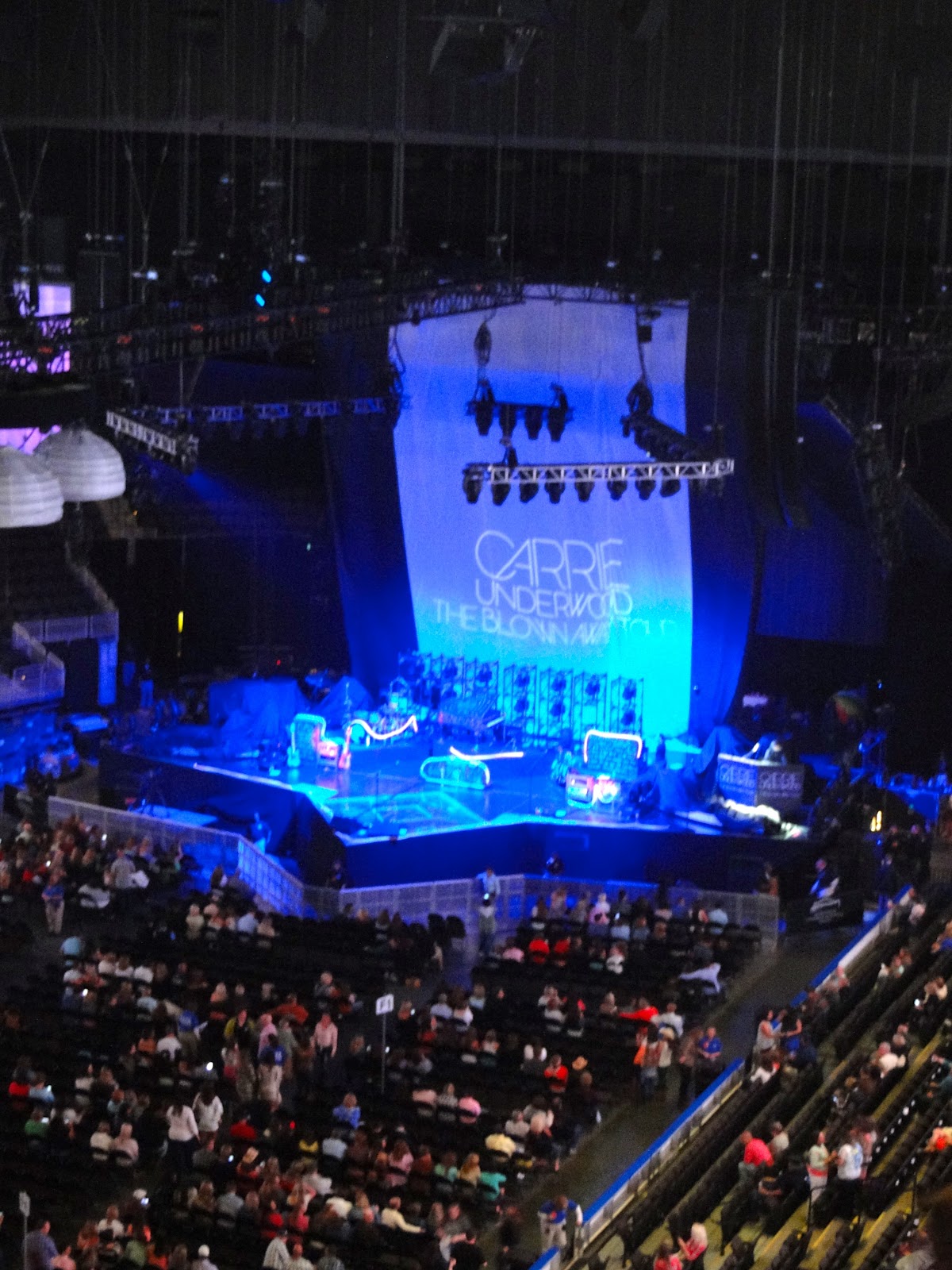 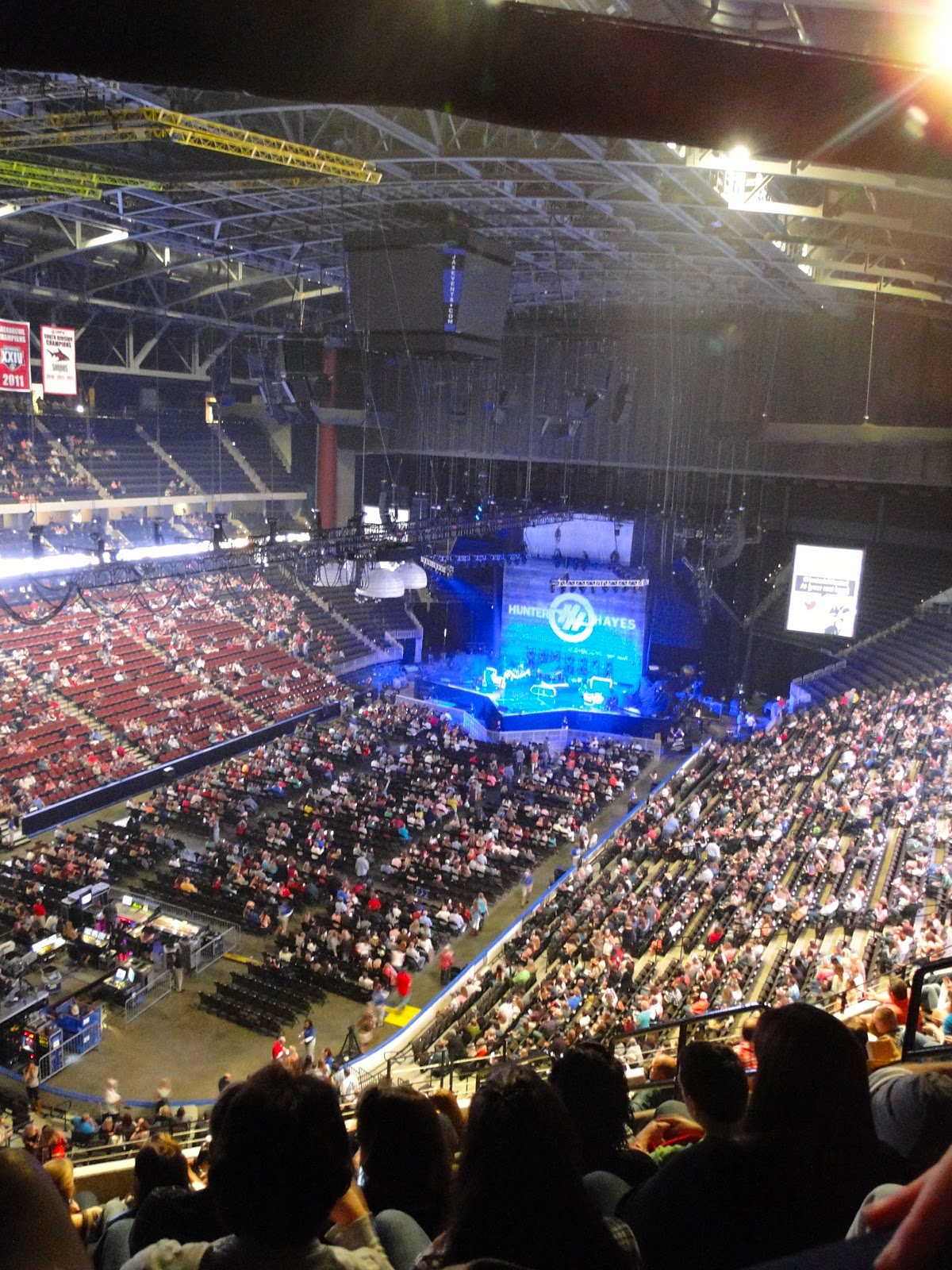 I haven’t been to a concert in AGES. The last time I went was to Blink 182 with Zach and Zach hated it so I didn’t really love it either. I know it’s SO random but Zach loathes live music. Even as a kid he had issues with loud sounds and the loudness at concerts bothers him and it’s just not his “thing.” And since it’s not his thing…well…it’s slowly not become my thing either. Which it used to be, BIG TIME. I’ve been to well over 30 live concerts. For sure. I used to go ALL the time in high school. I love live music. I especially just love that feeling of being part of the crowd. Everyone singing together. Feeling that connection with everyone. It’s awesome. Even though I didn’t really know the performers that night it def still brought back that old love of mine! I had a BLAST!!! I know Zach won’t ever want to go with me but I’m def down to start going to shows more with friends and such b/c I realized how much I’ve missed it!!!

Hunter Hayes was the opening act and I didn’t have a CLUE who the heck he was. I think he’s pretty popular though in the country music world? I was blown away by his raw talent and honestly preferred him over Carrie Underwood. I didn’t leave their wanting to download any of her songs but I downloaded his song “Wanted” right away. It’s awesome! And he has a very unique sound which I really like. I’ve always been a hardcore Alanis Morissette fan bc of her unique sound! 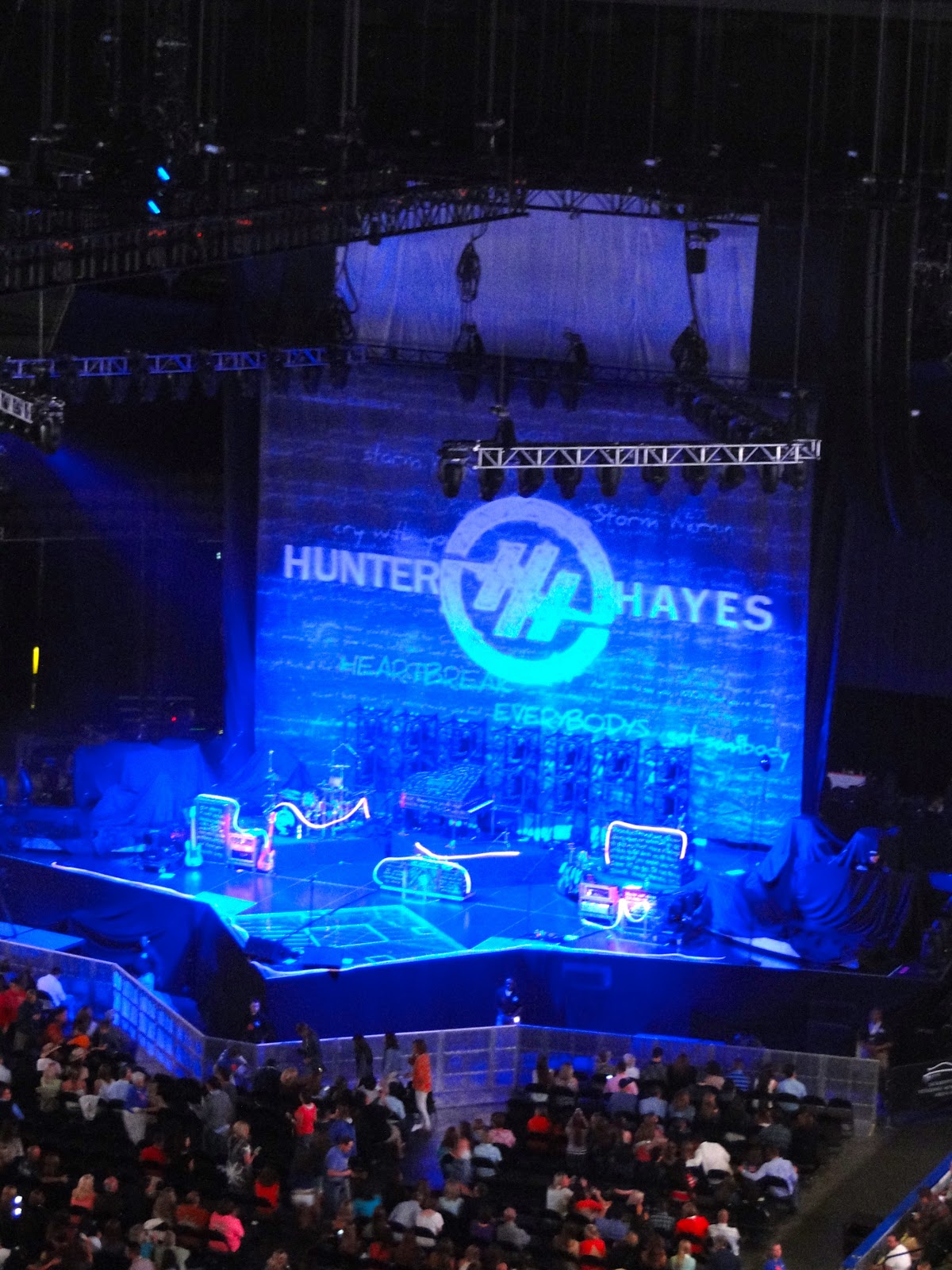 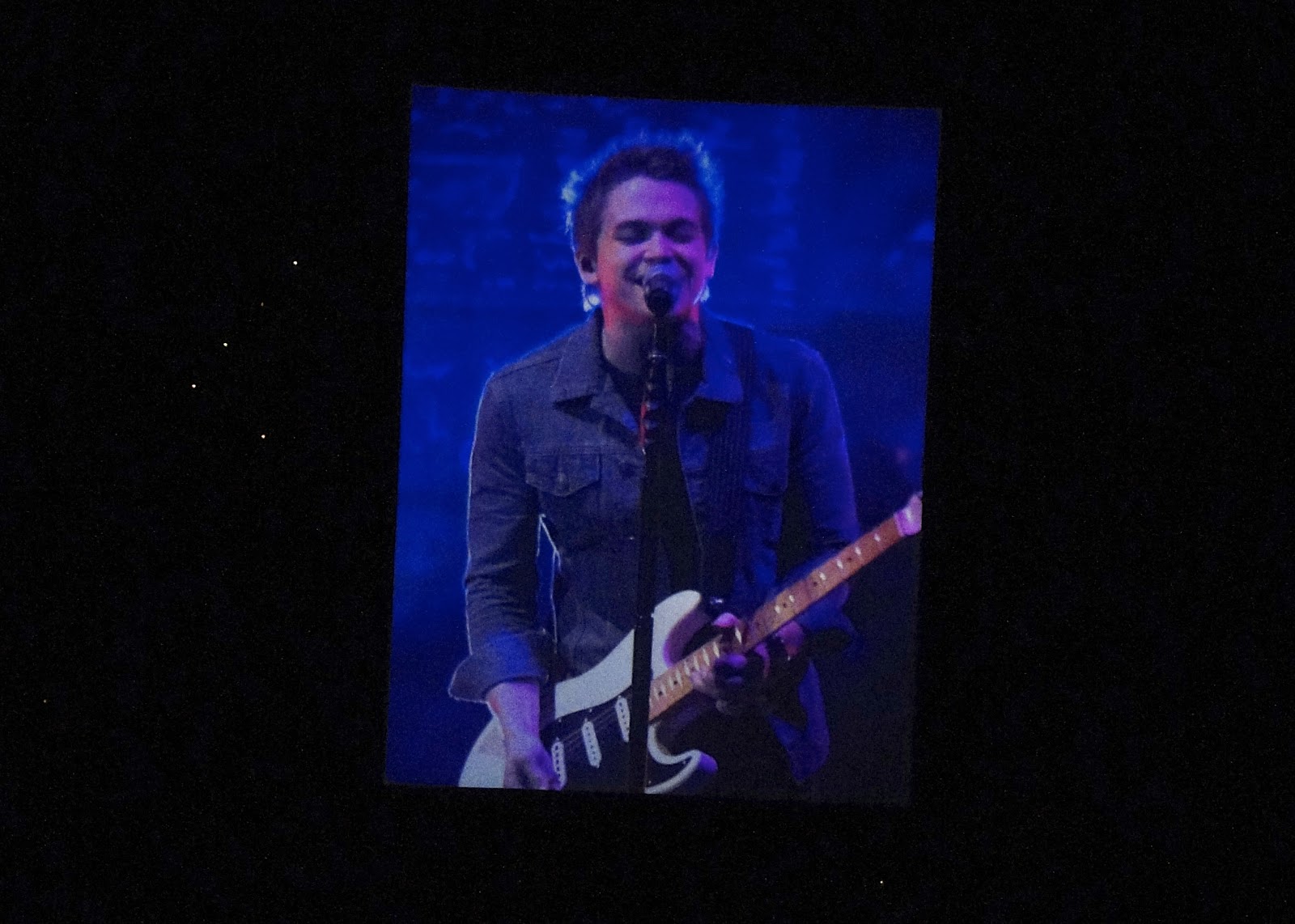 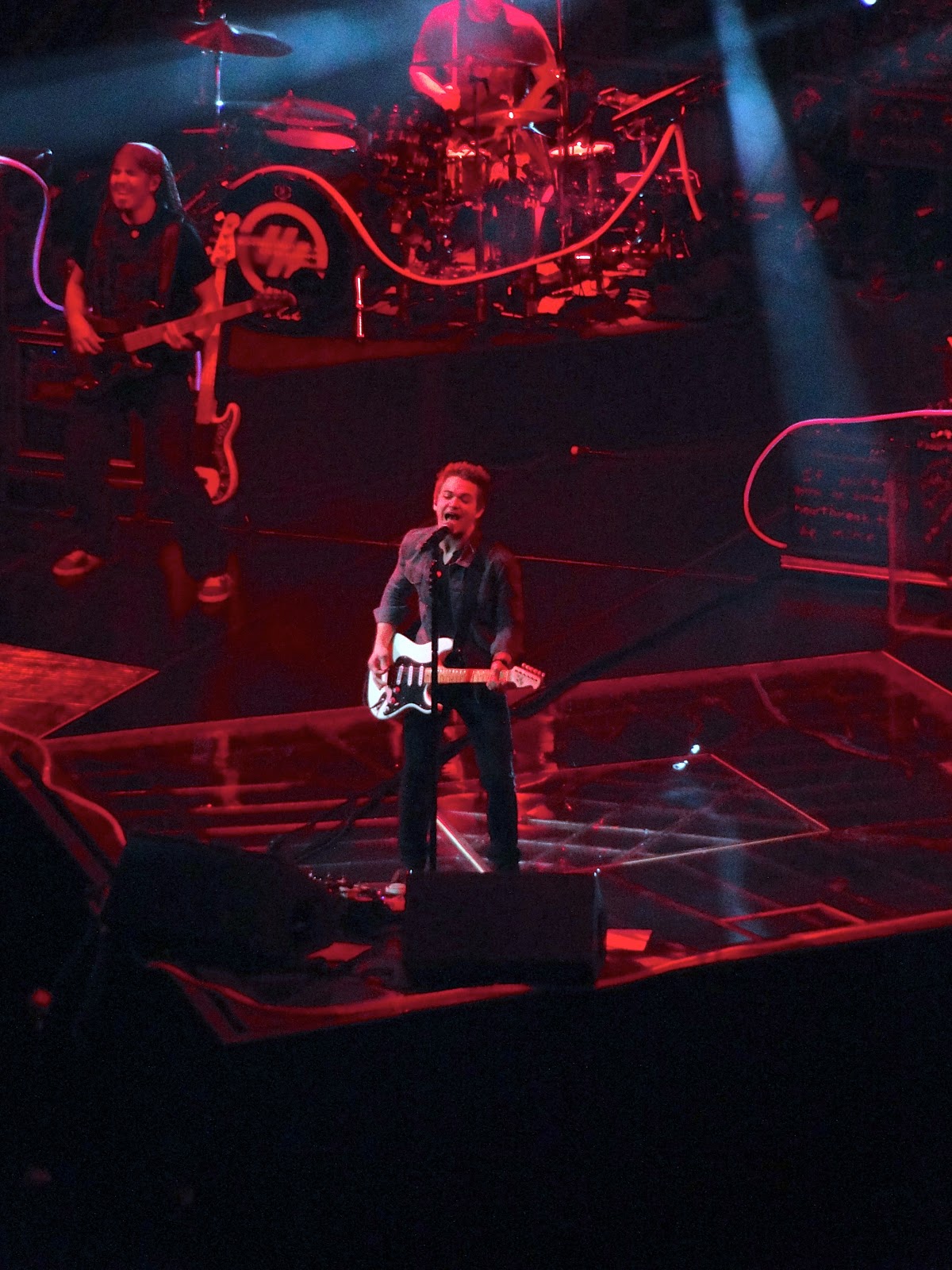 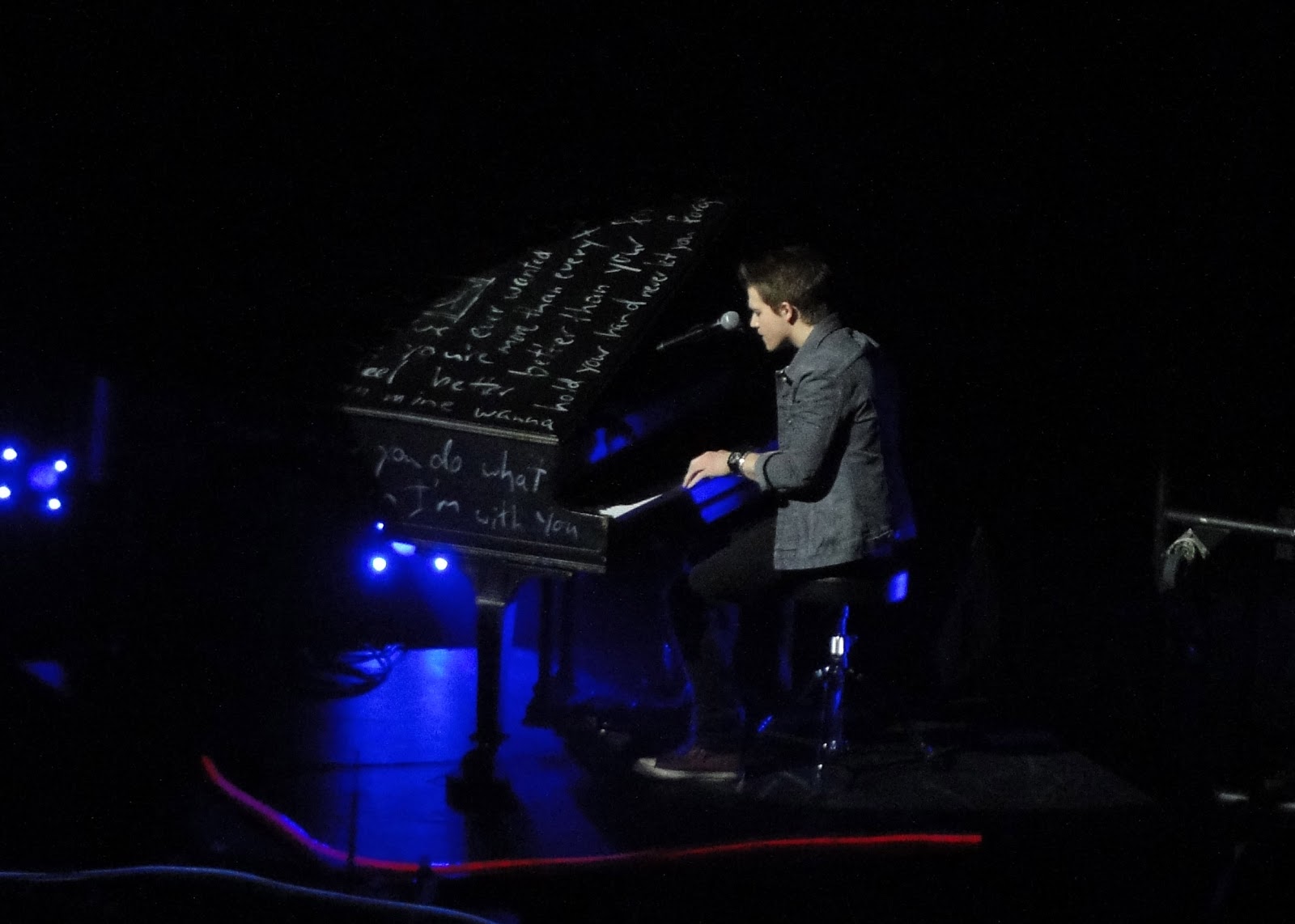 I didn’t realize Carrie Underwood was a HUGE star? I mean I knew she was really, really pretty and that she won American Idol (which we don’t watch) but I didn’t realize she has had so many hits??? For going to a show where I didn’t know the artists, I’m thankful it was country music. The songs are all very understandable and slow so I could really listen to the words. Plus country songs always tell a story!!! Being a mom though has FOR SURE made a big change in me and how I view things. It really, really bothered me that Carrie sang songs about God one minute then songs about hooking up with a guy and not knowing his last name the next. I mean really?!?! What a terrible example for young girls who obviously idolize her (based on the fact that so many were filling the seats at her show!). And I don’t like her song about killing a guy either!!! Guess I’m a mom for sure, huh?

We had a lot of fun looking at all of her outfit changes! She changed SO many times! And it was neat to see how much live shows have changed too over the years. The last “big concert” like that that I’ve been to was probably the Justin Timberlake/Cristina tour back in 2003…so yeah, 10 years haha. It was all very awesome! 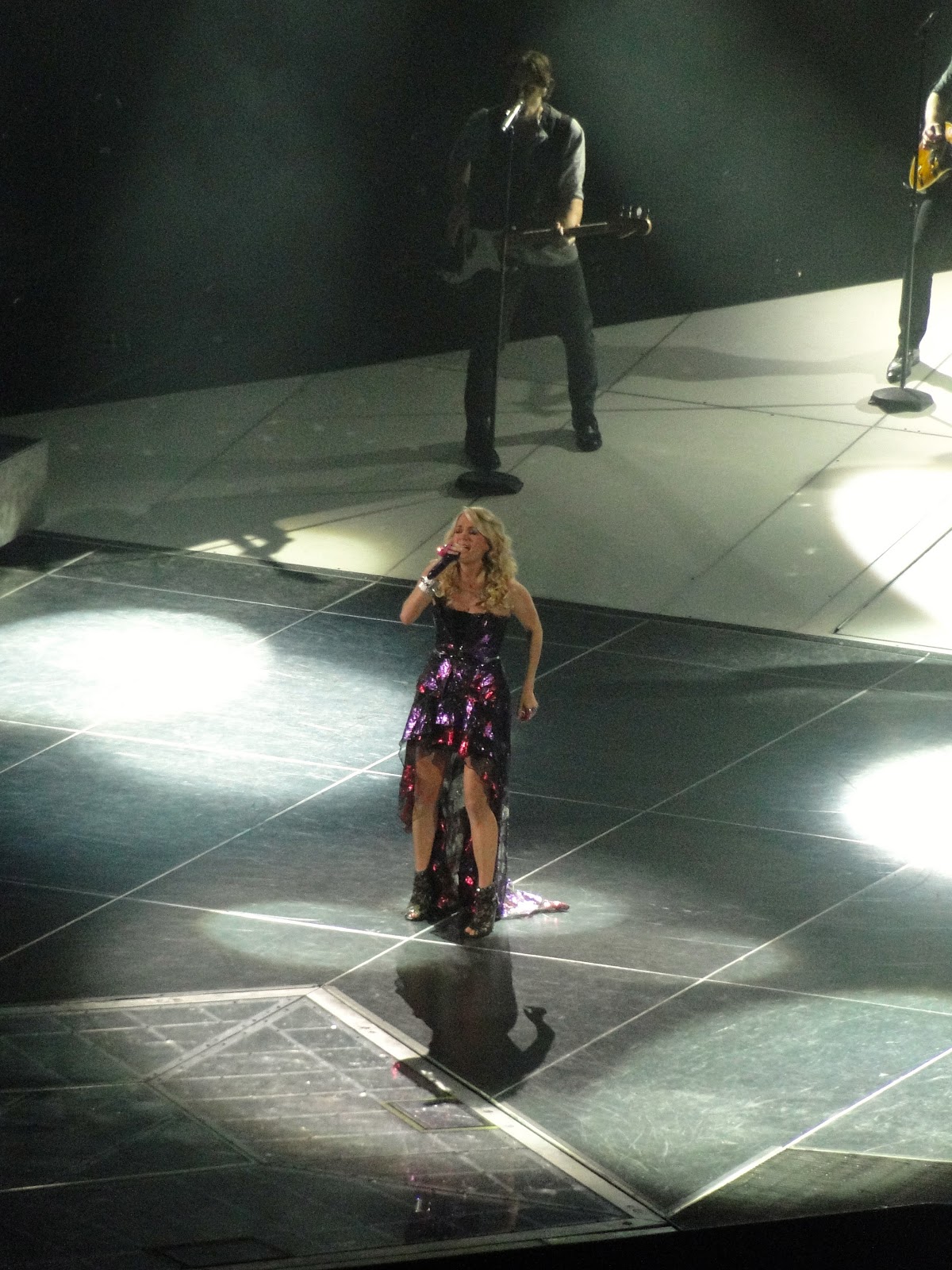 Our seating arrangements worked out super great too. Jolee was on one end next to some younger girls closer to her age who were getting CRUNK and standing up and dancing and stuff so it allowed her to really get into it and then Mrs. Charlotte was on the other end next to some older women who, of course, knew each others entire life stories by the end of the night. 🙂

It wouldn’t be a night out without something crazy happening…always gotta have a story right??? Well RIGHT at the beginning of the show some people being us were mega wasted and being super loud, using bad language etc. So loud that they were louder than the concert going on! And you know that junk is LOUD. The ladies beside Mrs. Charlotte said something to them and asked them to be more quiet or something like that and this dude went OFF on her. Cussing at her, threatening her, etc. It was intense. My “street smarts” kicked into high gear for sure 🙂

We ended up talking to security about it (I sat with Mrs. Charlotte b/c I did NOT want something happening to her!!!) and the people did settle down. I wish they’d asked them to leave though, honestly. When the show was almost over the lady beside Mrs. Charlotte left early as she was a little handicap and wanted to beat traffic and the crowds and that rude dude left soon after she did. We were all worrying about her and if she was okay…

Since we were nose bleed nose bleed section there was NO WAY any of us wanted to stand up like we normally would at a concert. Legit, one wrong step and you’d be falling! Instead we had some pretty intense Arm Dancing going on. Casey is the QUEEN of the arm dancing! I saved mine up for the ONE song I knew and then I busted out with my signature new arm dance special called “the cut ’em off the list” move. There wasn’t any photos taken to prove it’s awesomeness. So just trust me. It’s amazing. 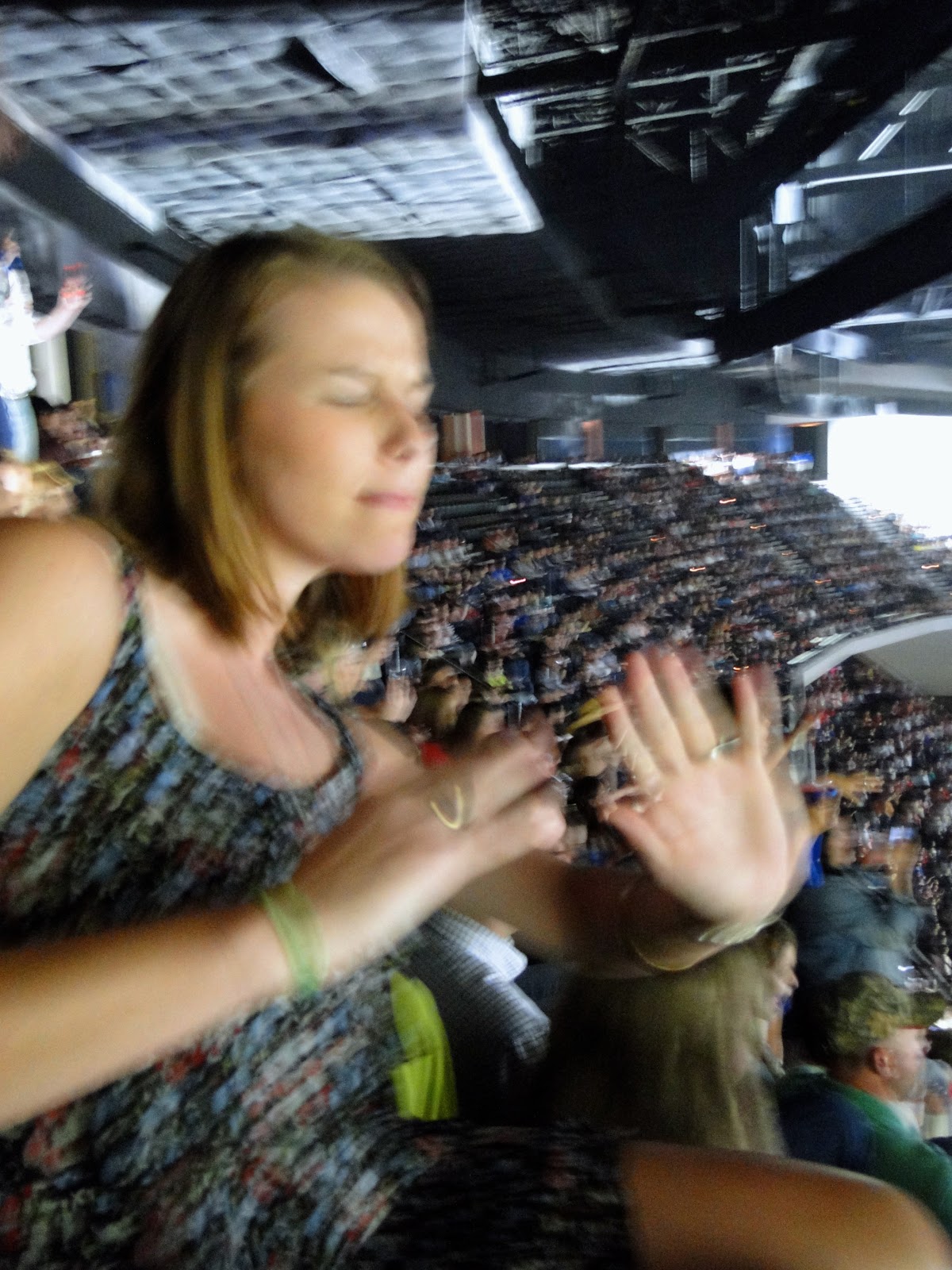 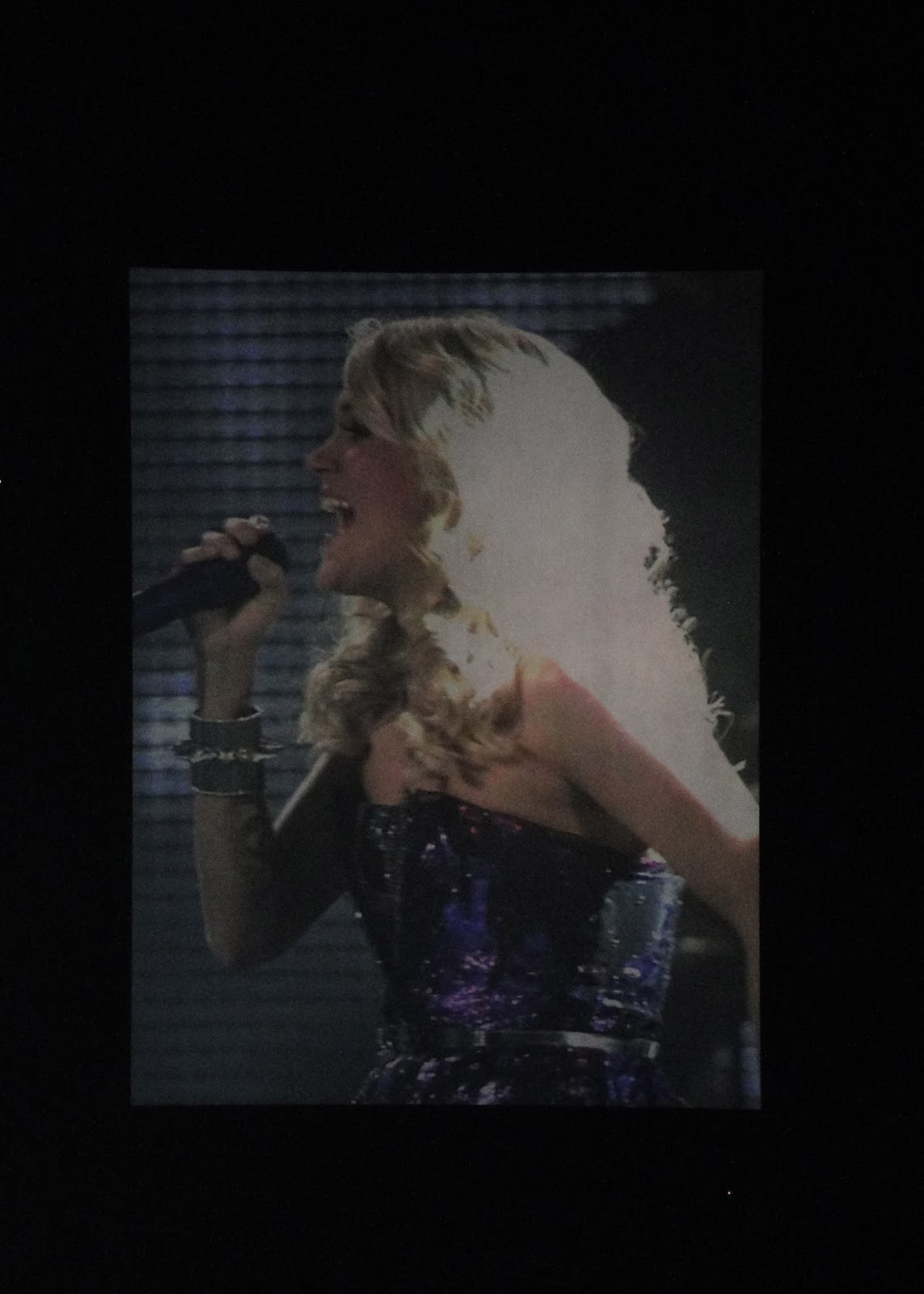 It was cool when part of the stage floated about the crowd! 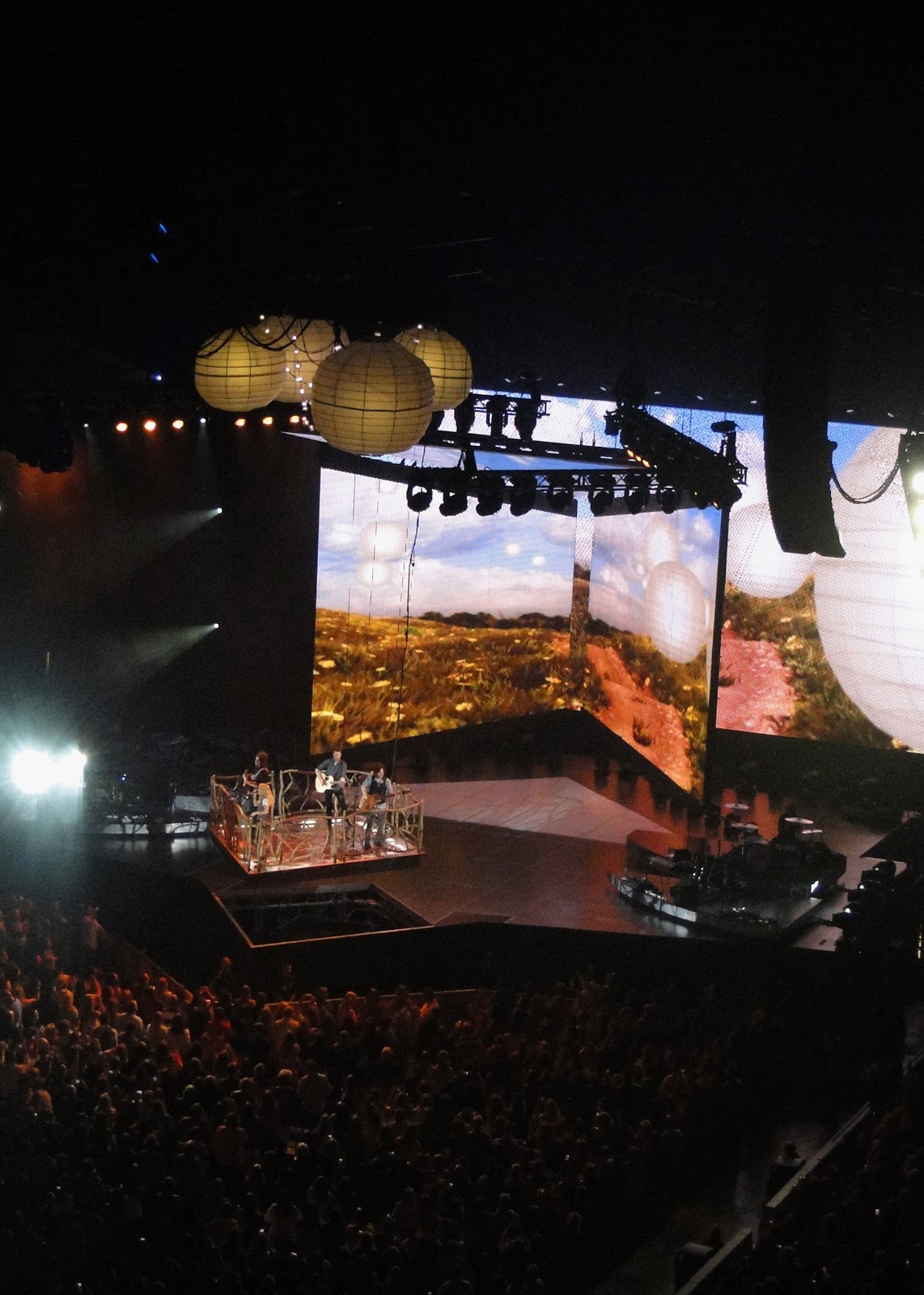 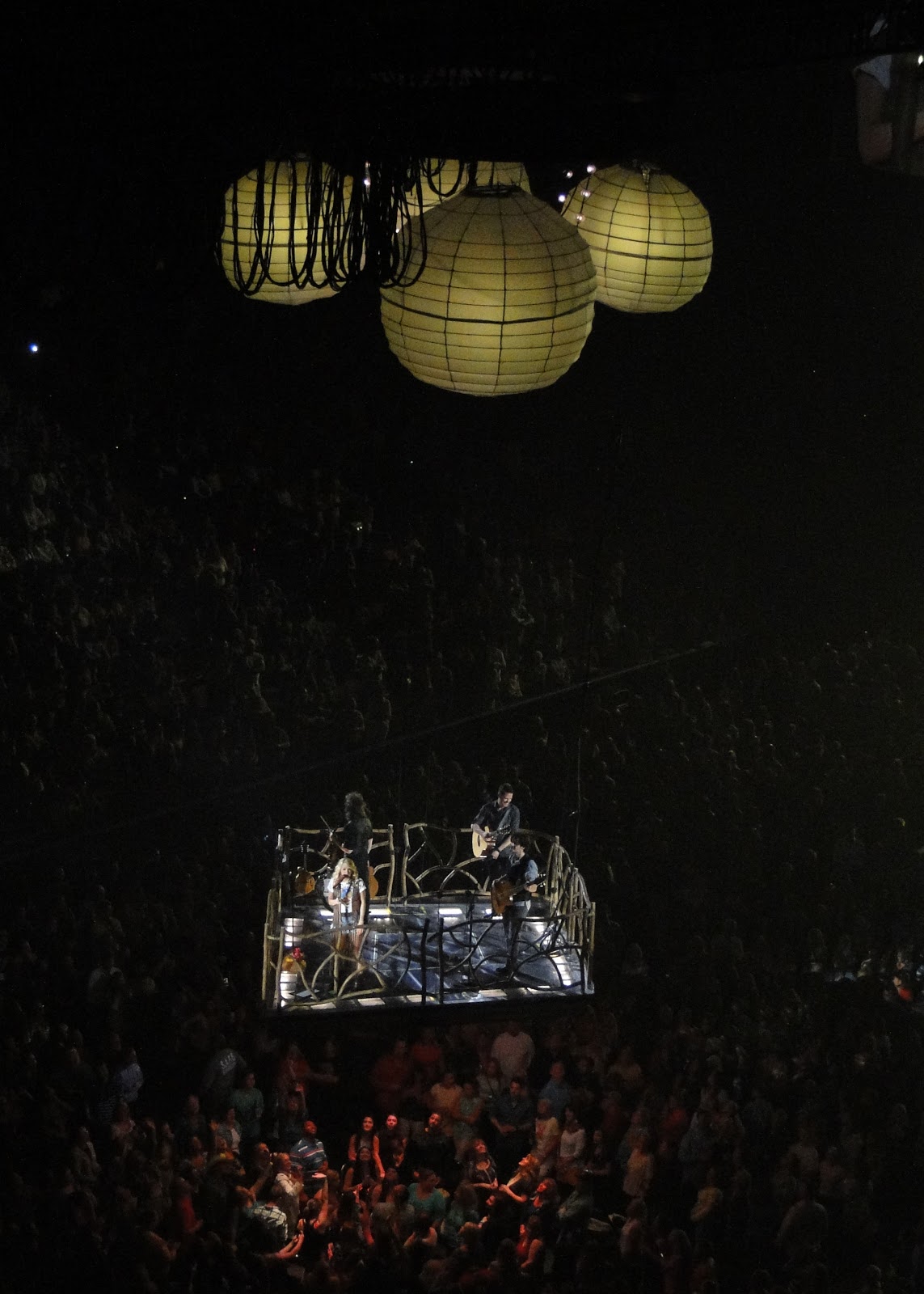 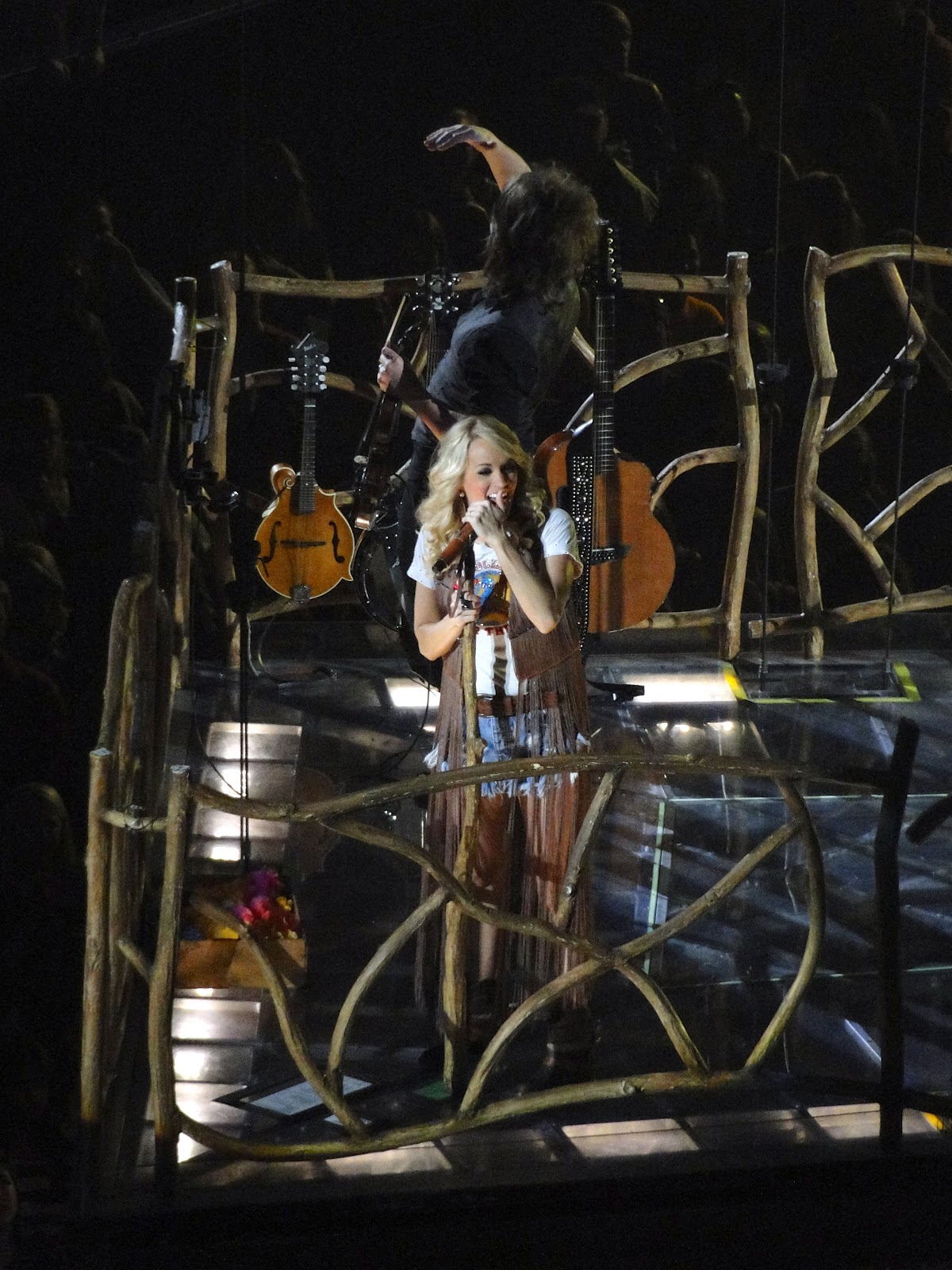 And when Hunter Hayes got to join her for a song! 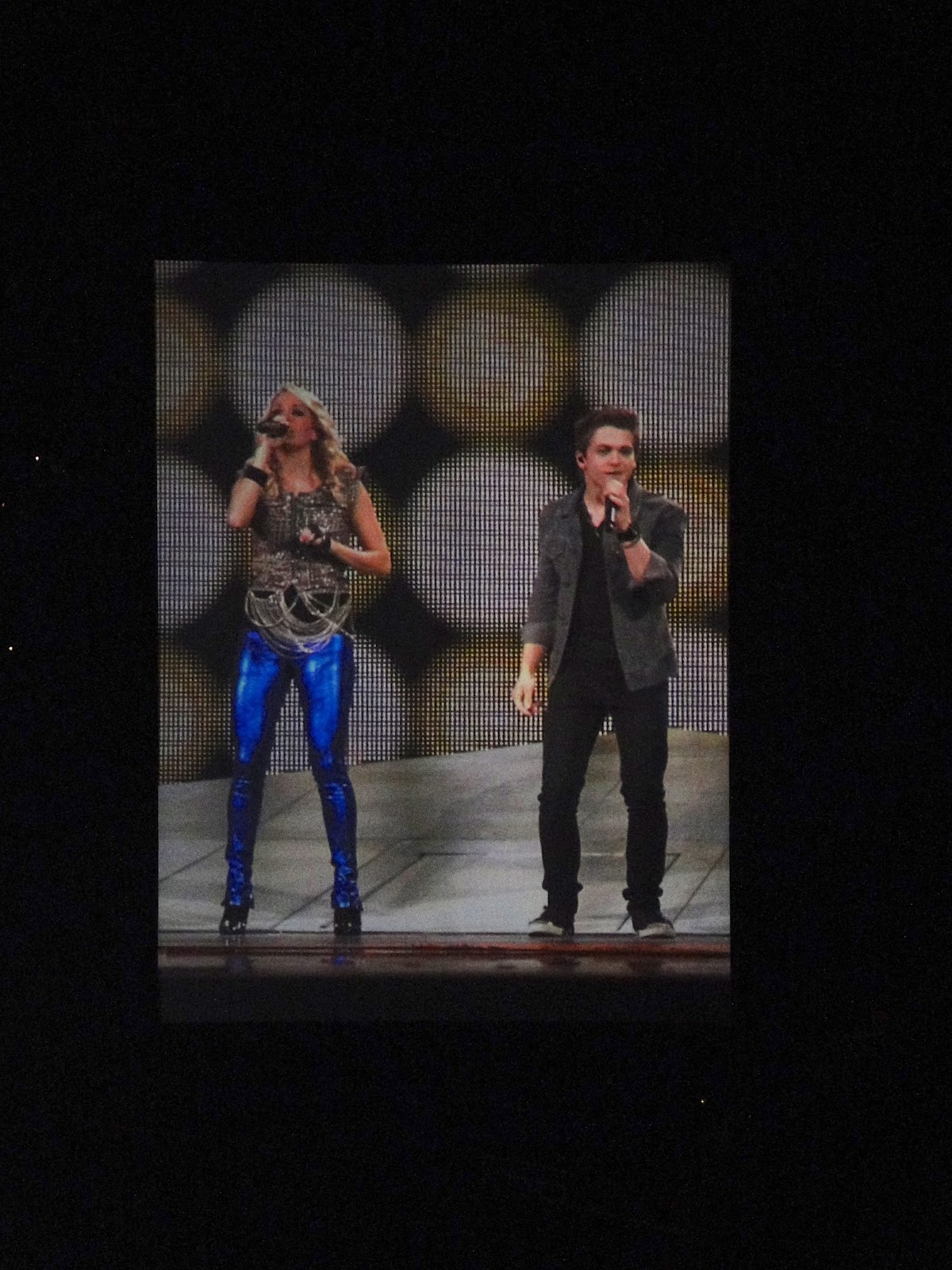 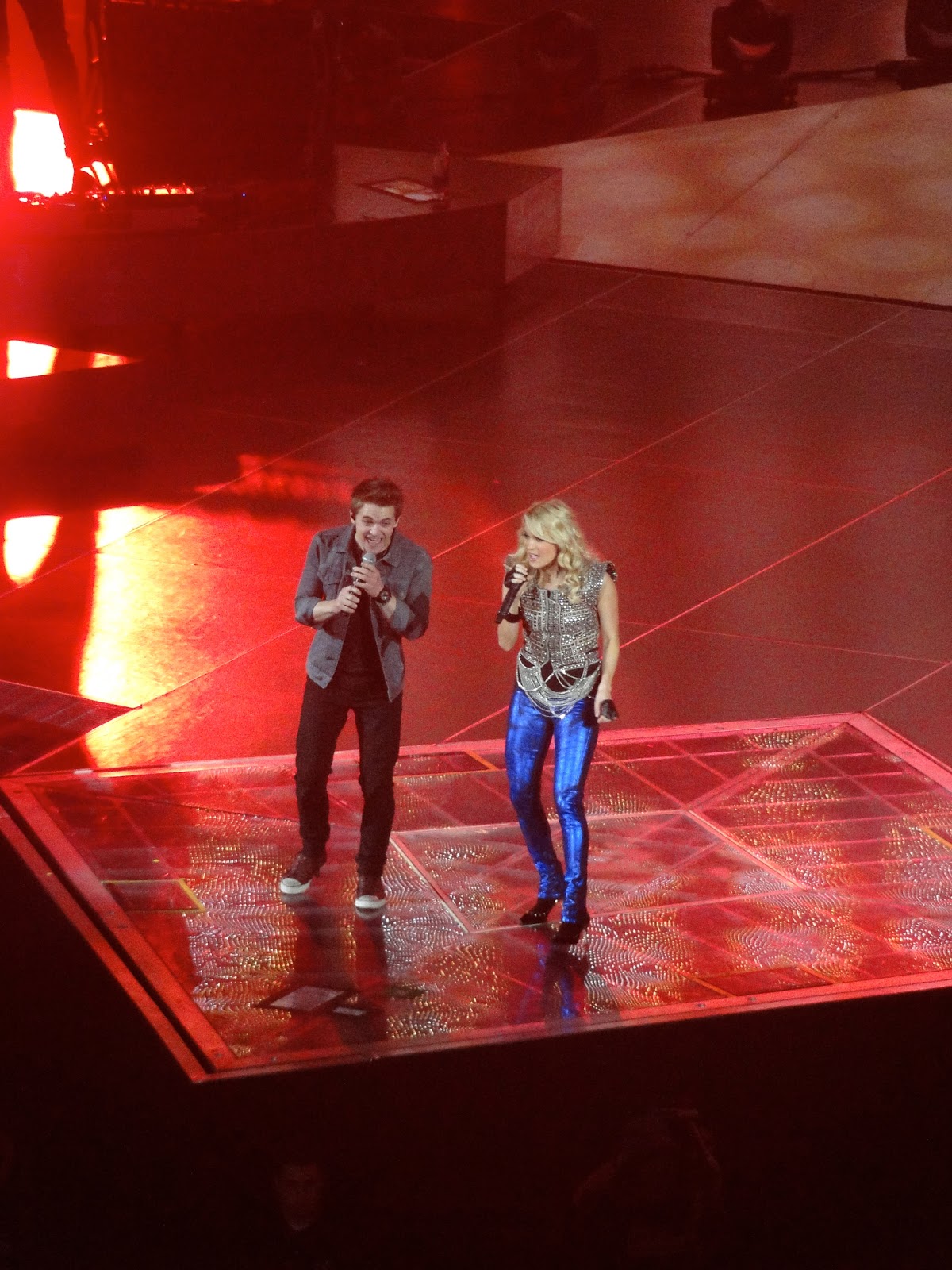 It was SUCH a great night! I know Courtney had an awesome birthday! I LOVE experience type presents, don’t you? The memories made are always more precious and meaningful than a material present! I have already made sure everyone knows that Zach and I will be turning 30 next year, the pressure is ON to live up to that! 😉

I’m so glad I decided to go and that everyone was sweet enough to include me! We had more great conversation on the drive home and I love that I can open up and share my feelings with them all and know that they love me no matter what. Zach had a fun day with the kids and Trey and Jordan too which worked out great! It’s pretty much a GIVEN now that if I’m not with Zach, then Jordan probably will be haha. It’s so great that they have that friendship and that we are all so close. It’s really what I always dreamed of having someday and I don’t take any of these precious bonds for granted!