Yes, I was 6 days shy of being 6 months pregnant. Yes, I know this. But yes, I went CAMPING!

In recent days poor Zach has been stuck with three ladies pretty much all the time: me, Katie, and Ashley. Luckily Ashley is very competitive and athletic so she filled the “guy” void for awhile but the day has arrived where Zach has some new guy friends! They may only be 18 (and yes we’re 24) but hey they are Christians who don’t party and who like to have fun so it works!

Zach and I went camping one weekend last year and had a great time together. For Christmas Mom hooked Zach up with tons of camping gear and we still haven’t gotten around to using it. I came up with the idea of taking our new friends camping as it’s a very “guy” thing to do and I feel like Zach needs some guy stuff after all the “girl” time he’s had to deal with lately.

I got back from Kennesaw on Thursday…spent the morning Friday watching it rain while I loaded up camping gear…then Friday afternoon we headed to Lake City, Florida! 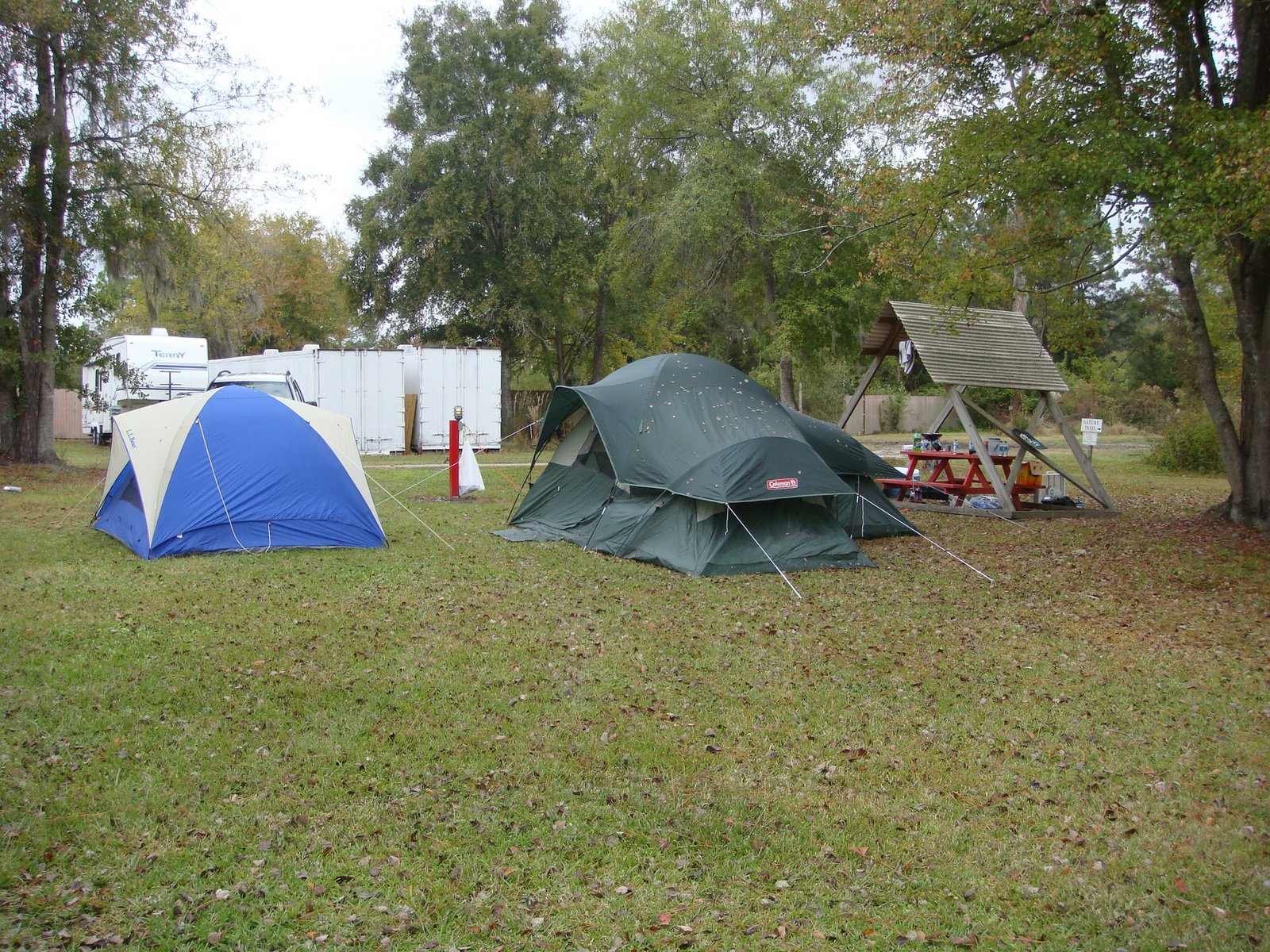 We brought the dogs and just planned on never leaving the site the whole weekend. We bought tons of food, movies, games and fishing stuff! The guys only really needed an axe and they were occupied the entire time! Our fire never burned out and many logs got destroyed in the process. 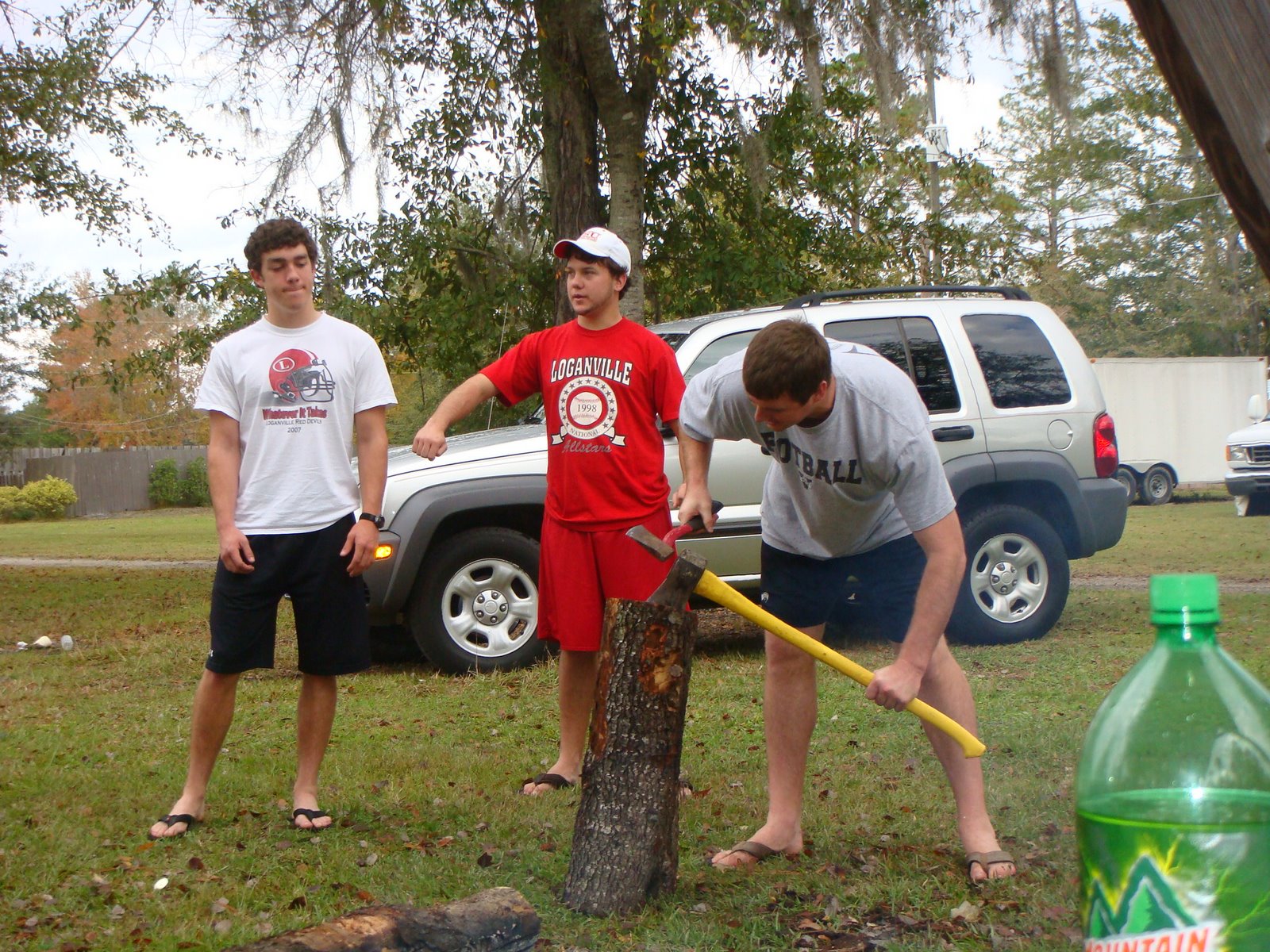 Ashley and I enjoyed relaxing for the most part as the guys also took care of all the cooking! We helped clean up but it was a pretty easy task. 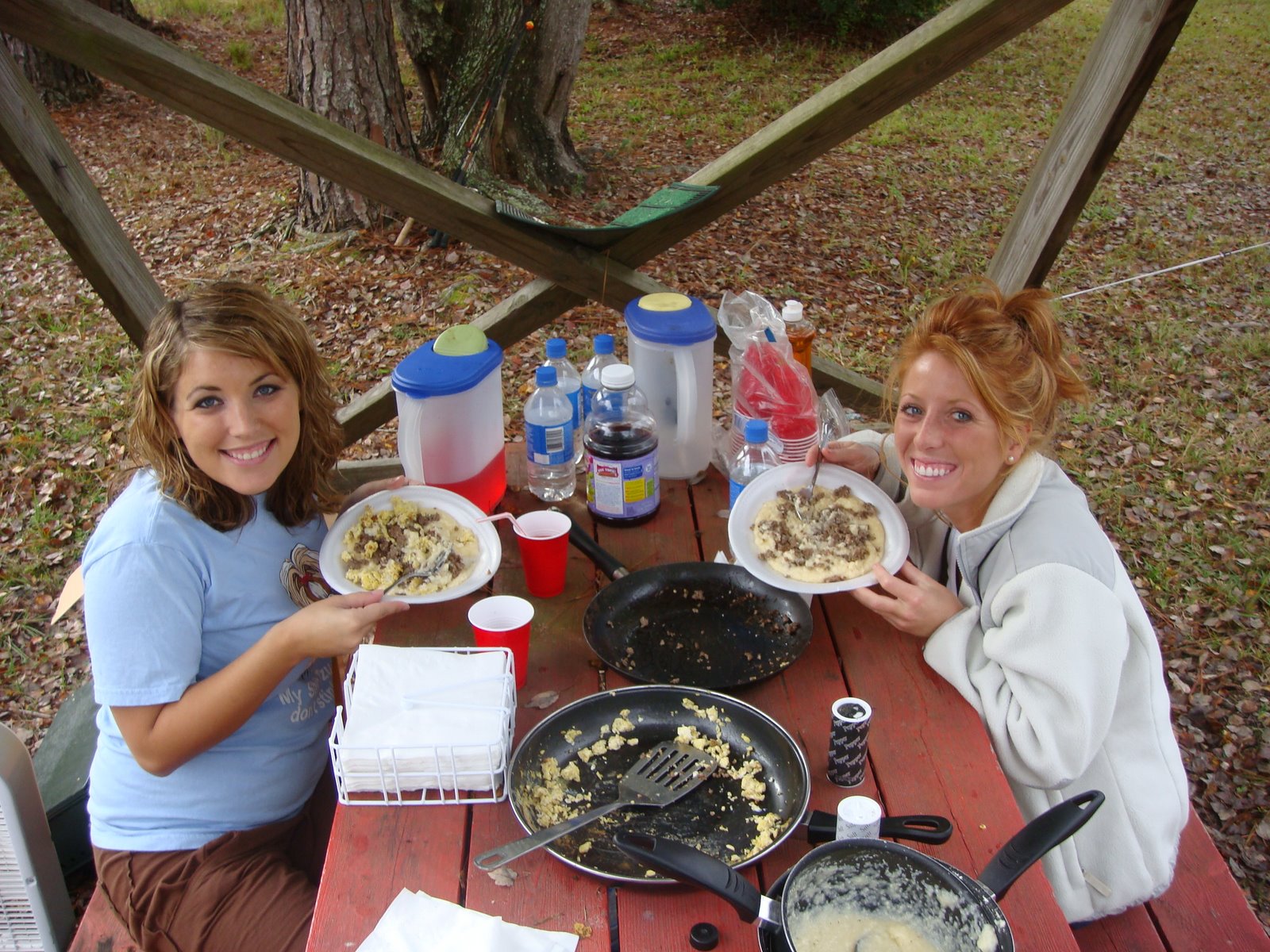 Of course the first night is was very muggy outside and still wet from the days rain. The next morning was decent then it downpoured. Being that I had a fever when I got home on Thursday from Kennesaw I had to be careful not to get sick again so I didn’t participate in the mud/rain football game. Zach and Ashley pretty much murdered Zach and Codie though! 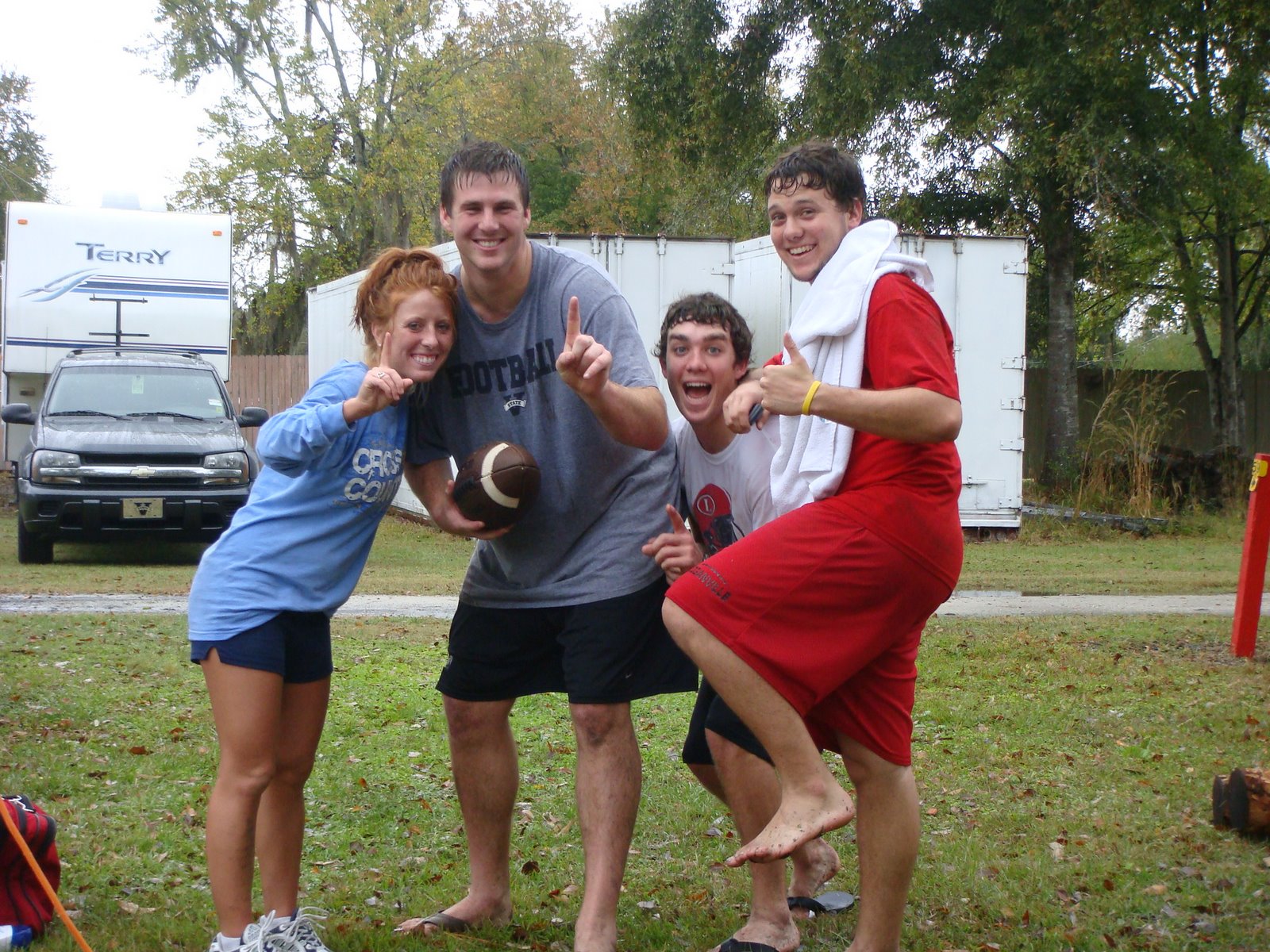 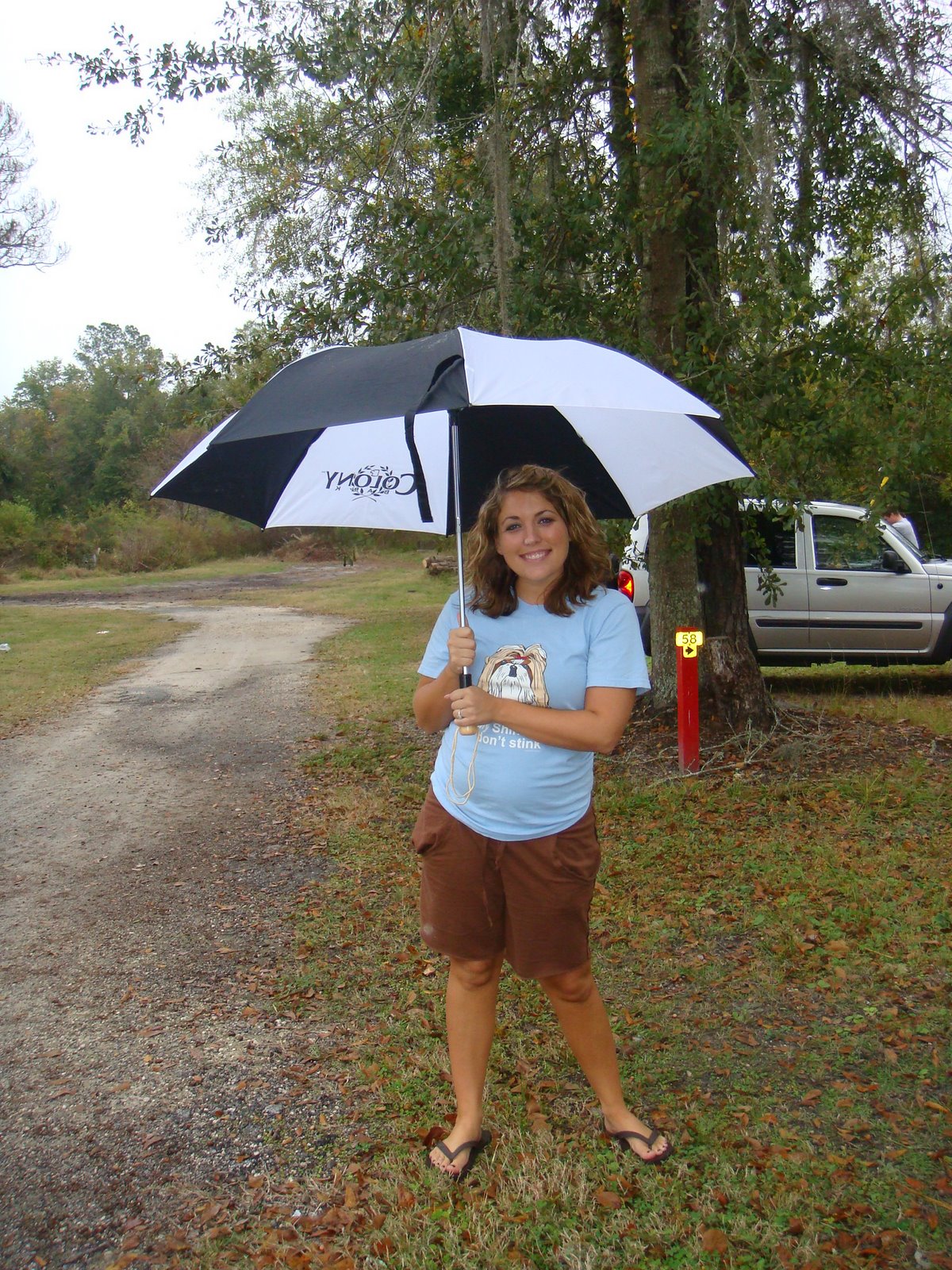 Other than eating we also had fun playing bored games, watching The Strangers, playing cards and fishing (and yes they caught a ton of fish!). Even though Sat night was FREEZING we still had such a great time together and I think my favorite part was when we just sat around the fire keeping warm, eating ‘smores and getting to know each other better. I think telling scary stories was not the best idea because we all went to sleep pretty freaked out (the boys slept with their axes and Ashley and I had the hammer).

While I realize I’m crazy for doing all that with how far along I am it was all worth it to get to know new people better and to especially see Zach have such a great time! He deserved it!