I know a lot of parenting books now recommend taking babies to the dentist at a year old, and some even say to take them as early as when they get their first tooth. We didn’t take Kye to the dentist until he turned 3 and I thought it made his first visit VERY easy as he was old enough to understand and be prepared for what to expect. (oh my goodness he looks so LITTLE!) . I planned on following the same schedule for Britt’s first visit and wait until she turned 3. But then she chipped her tooth so she actually had her first dentist visit at under 18 months old. Needless to say, it was pretty traumatic. I decided to still wait to have her first cleaning until she turned 3. My hopes were that we’d be better prepared by then and that it’d be long enough away from that visit so she wouldn’t remember!

When Kye was due for his check-up I scheduled Britt for one as well so they could go together. We read our favorite dentist-friendly books in the days leading up to the visit (The Berenstain Bears Visit the Dentist

and The Tooth Book

) and I was pretty confident that she’d do fine, especially because Kye was with us to show her the ropes! 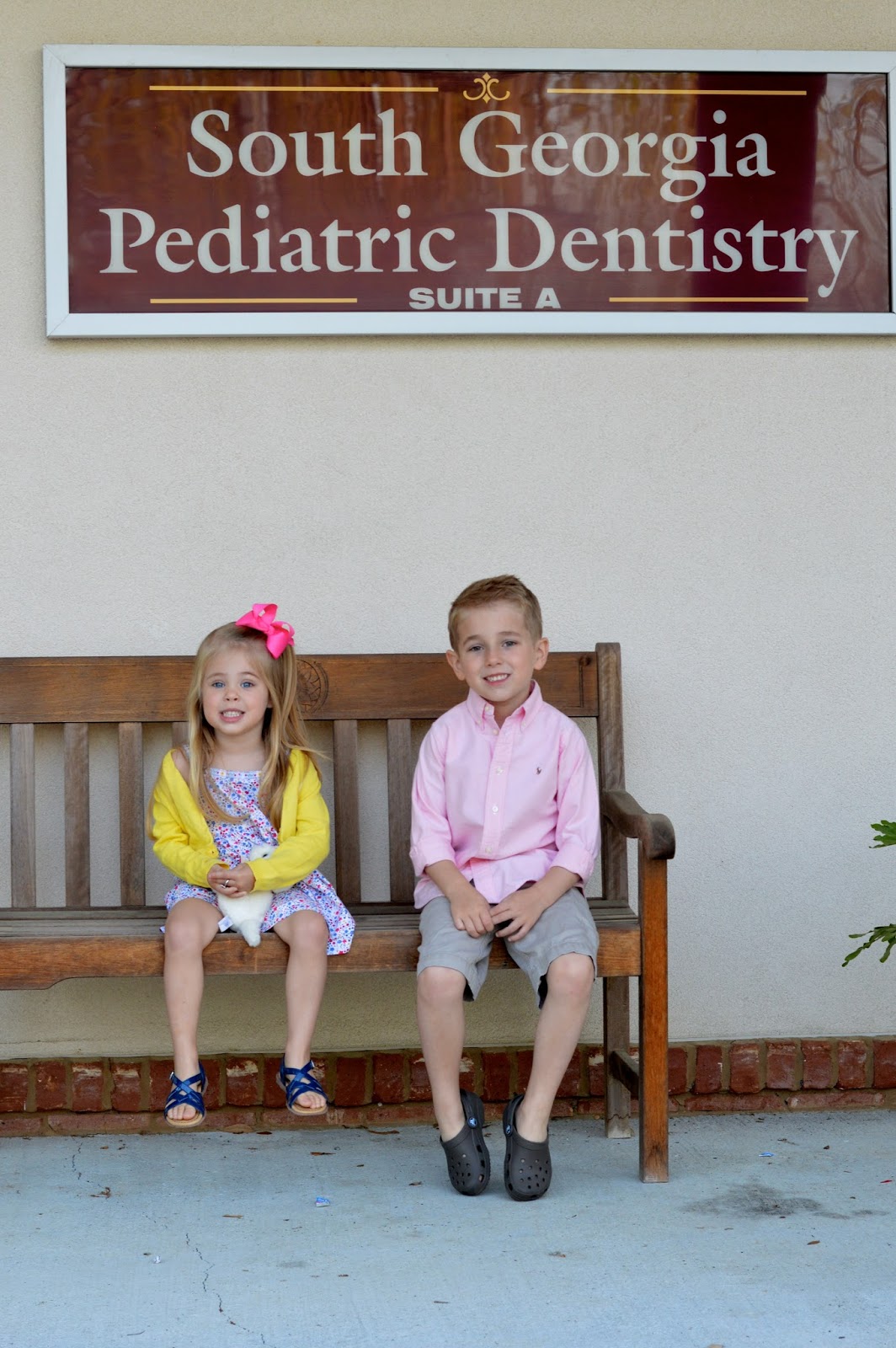 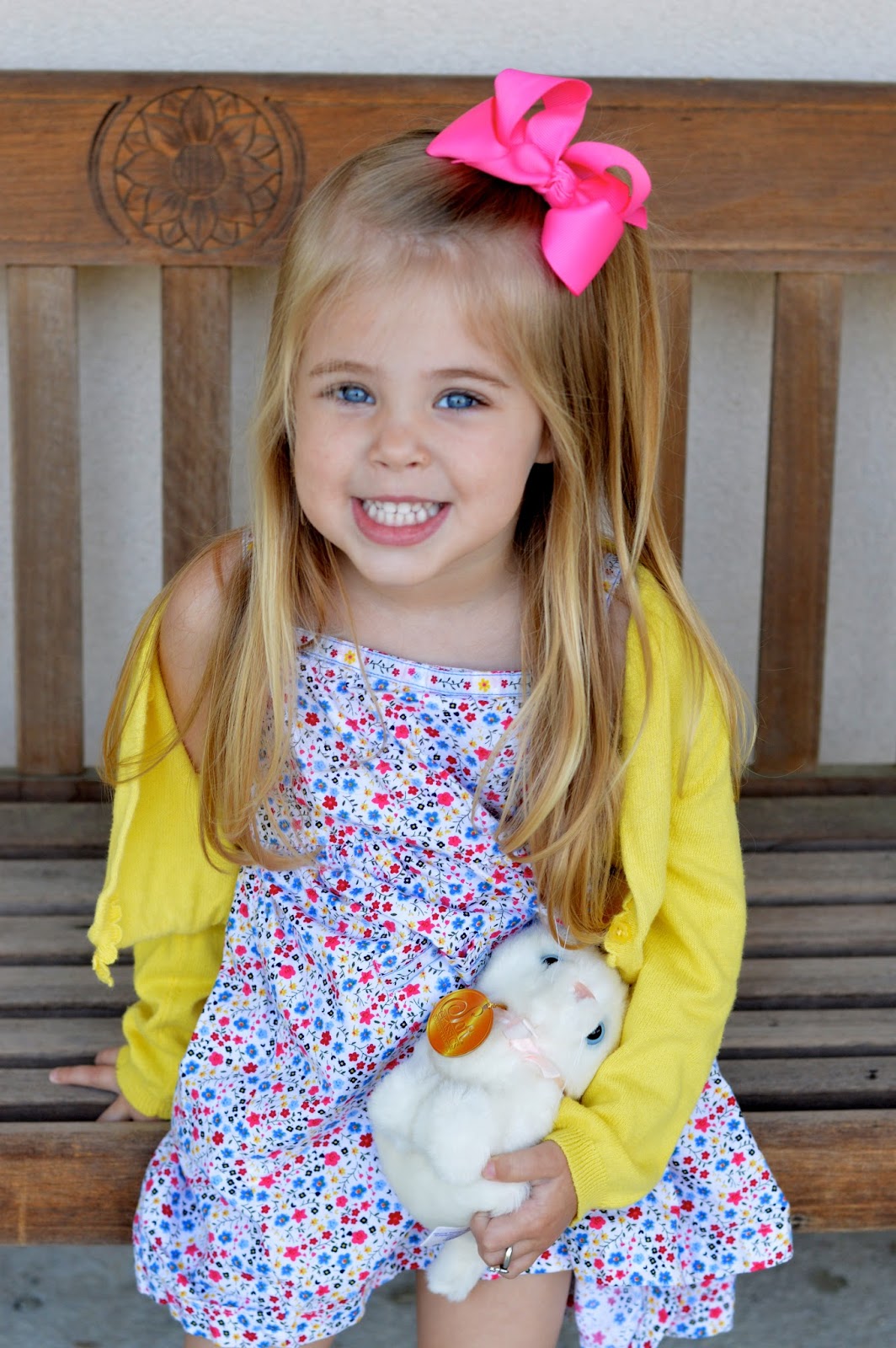 I am a big believer in a pediatric dentist. I went to one as a kid and always liked to go to the dentist. It was a very welcoming, kid-friendly environment. I actually kept going to the same dentist through college! I LOVE our pediatric office! It’s very warm and has a lot of fun aspects. Great toys in the waiting room, murals on the walls, plenty of treasure box choices, and especially tvs in the ceilings 😉

One of the reasons I’ve been so happy with our dentist office is that the dentist we’ve always seen, Dr. Josh, has been so awesome. A few months ago we got the tragic news of his unexpected passing. He was very young and his death shocked our town. It was so sad to hear the news but it was also a big blessing to learn that he’d been baptized just weeks prior to his death (you can learn more about baptism and why it’s essential to salvation here). I was a tad nervous taking the kids to the dentist as I was concerned that a) Kye would ask about Dr Josh and b) that we wouldn’t feel as comfortable with the other dentist at their practice. Thankfully Kye understands Heaven and I just briefly explained to him that Dr Josh is there now and he did fine with the news. We also LOVED Dr Carly and continued to have an amazing experience at their office (it helps that we always have Miss Amy there every time! She’s the best!!!) 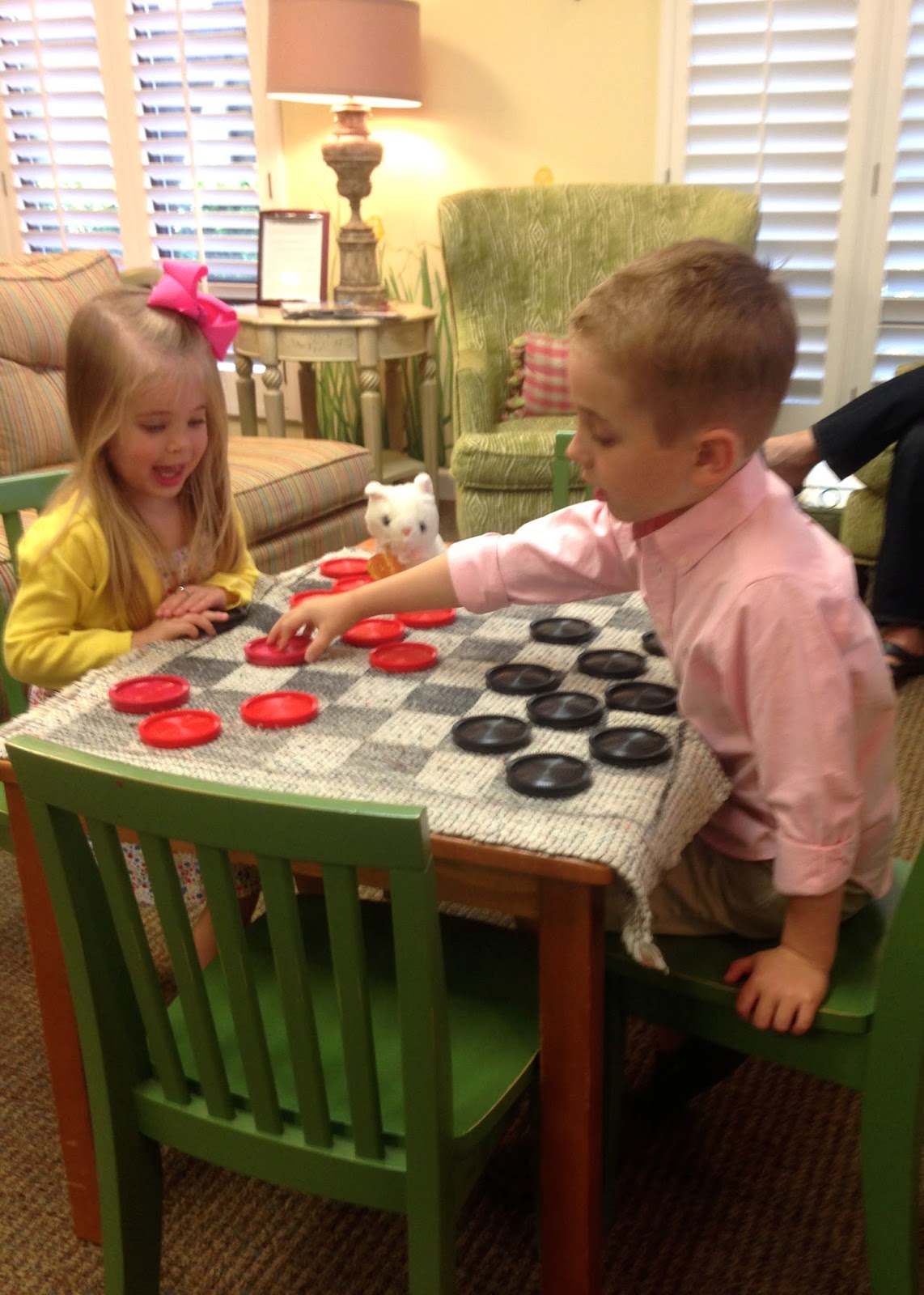 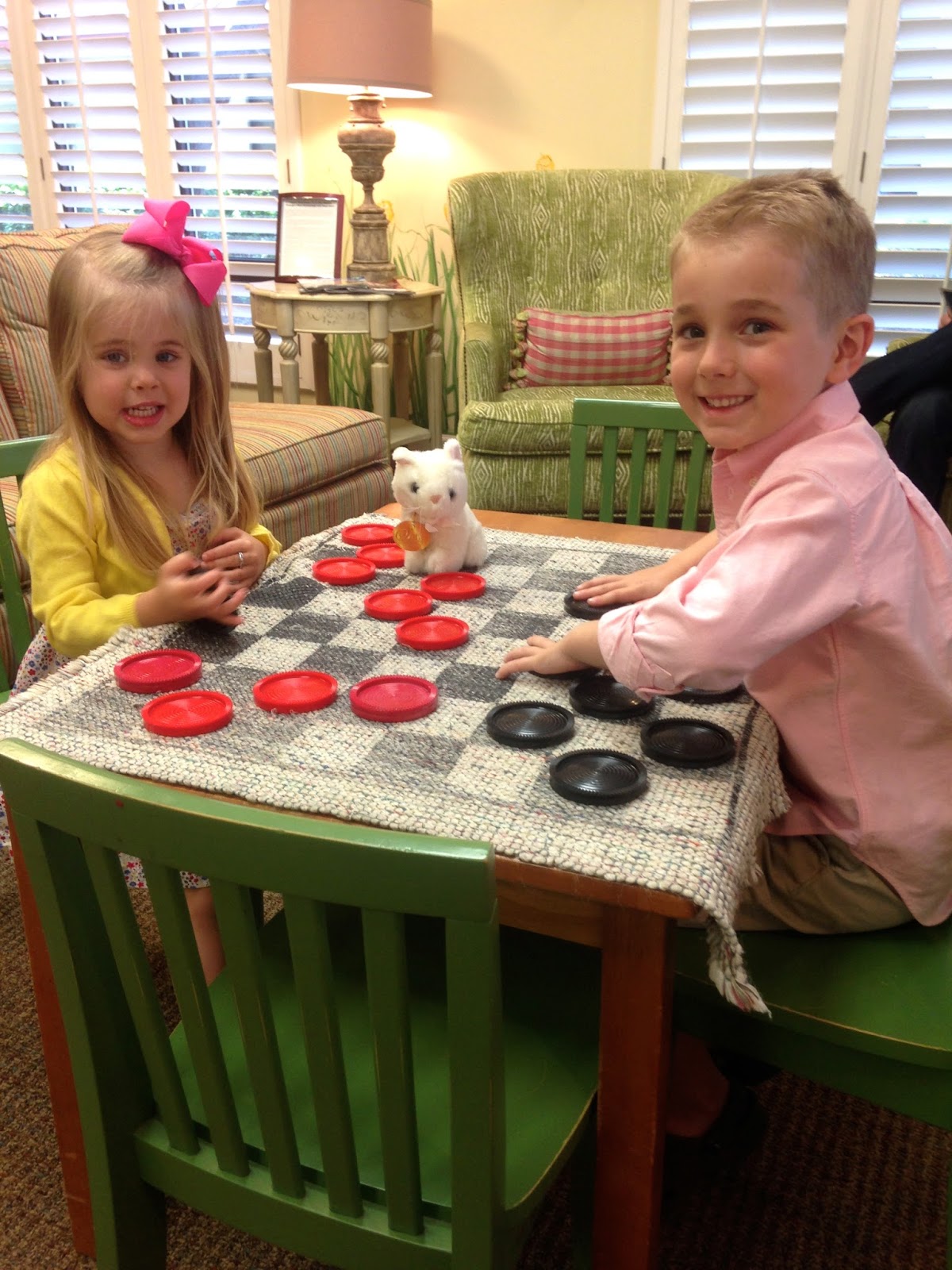 Kye went first to show Britt how it’s done and he did great. No cavities or issues! He got a pan scan done that shows more than a typical x-ray. We talked a good bit about his teeth. He has a beautiful smile which Dr Carly said usually when a kid has a “perfect smile” with their baby teeth it means they will have crowding issues when their big teeth come in! Zach AND Mrs. Charlotte both had to have 4 adult teeth pulled (neither of them have their “sharp teeth” isn’t that crazy?!?!) and I have a feeling Kye will be following suit.

Kye is at an age where all his friends are losing teeth and he’s dying to have a lose one. I was excited to talk about his teeth because teeth are very linked to bone age. With all the growth delay stuff I am a total nerd about it. I just really find it all SO interesting and love to talk about it haha. Lame, I know. But thankfully Dr Carly and I totally connected because one of her children had growth delay too 😉 When we first went to the growth dr with Kye one of the very first questions they asked was how old he was when he got his first tooth. With his delay stuff I assumed he’d also be delayed in getting in adult teeth. And I was right! She said she doesn’t expect him to lose any teeth for probably another year. She also doesn’t even see any of his last molars formed in the gums yet. She said she’s not concerned about it, especially knowing his growth delay history. We are going to have to do another one of the pan scans next year just to check on it but she said really his delay is a blessing. Since he is probably going to have crowding issues waiting longer for his adult teeth to come in gives more time for his jaw to expand and make room for them. I’m totally happy to put off the gapped up grins 😉

I did ask about solo brushing and they said to continue to go behind him and brush to make sure he got in the back and all! 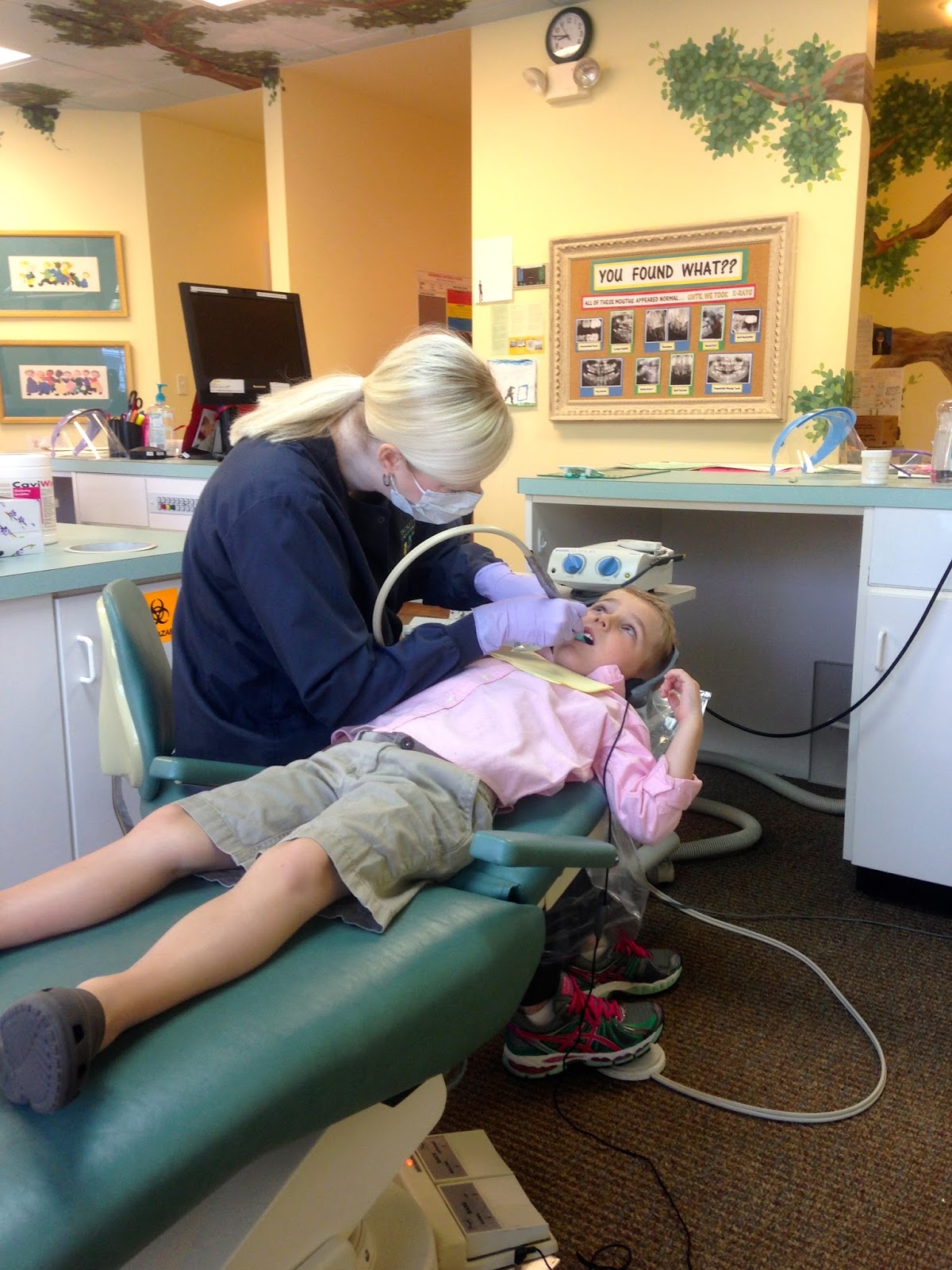 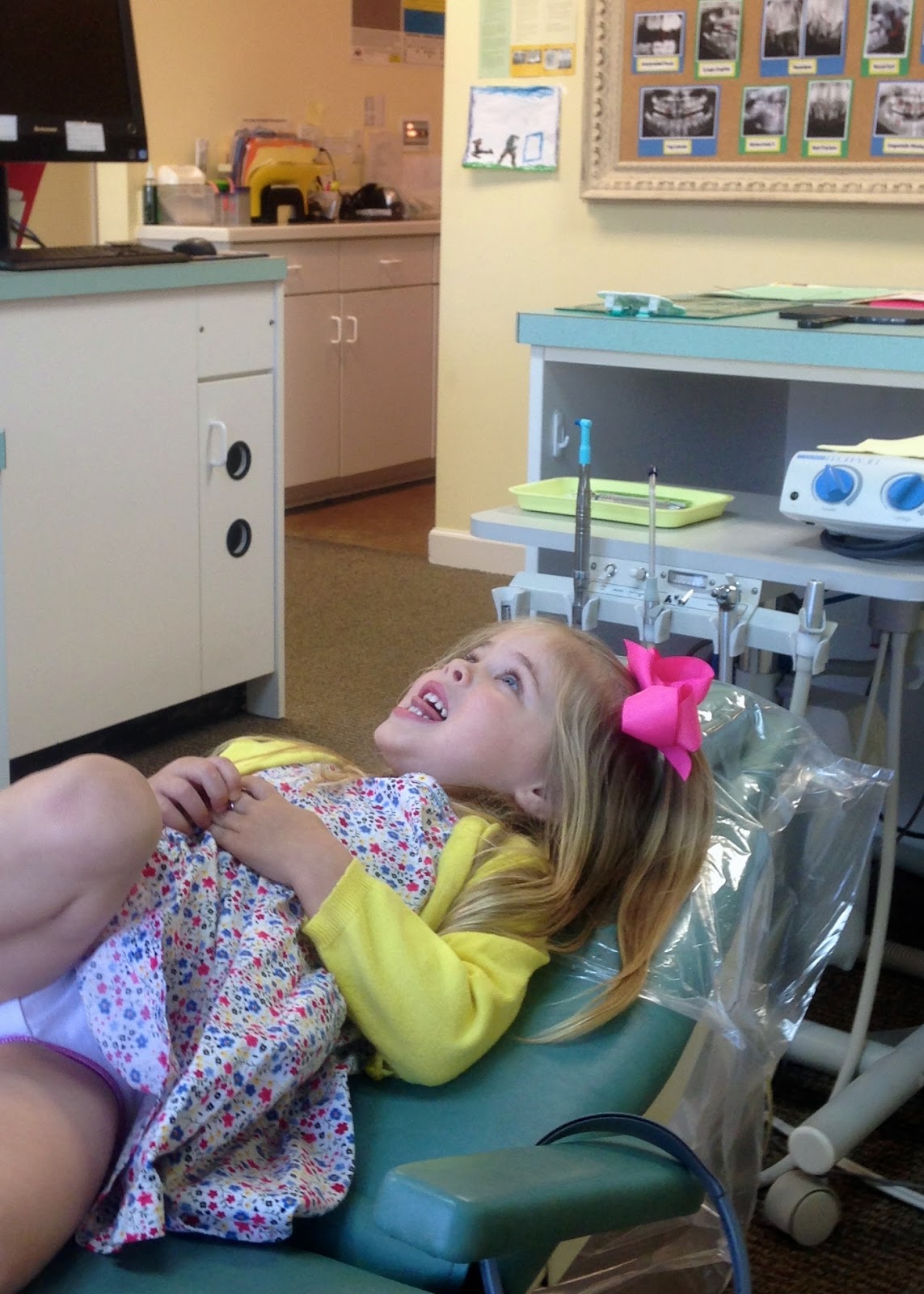 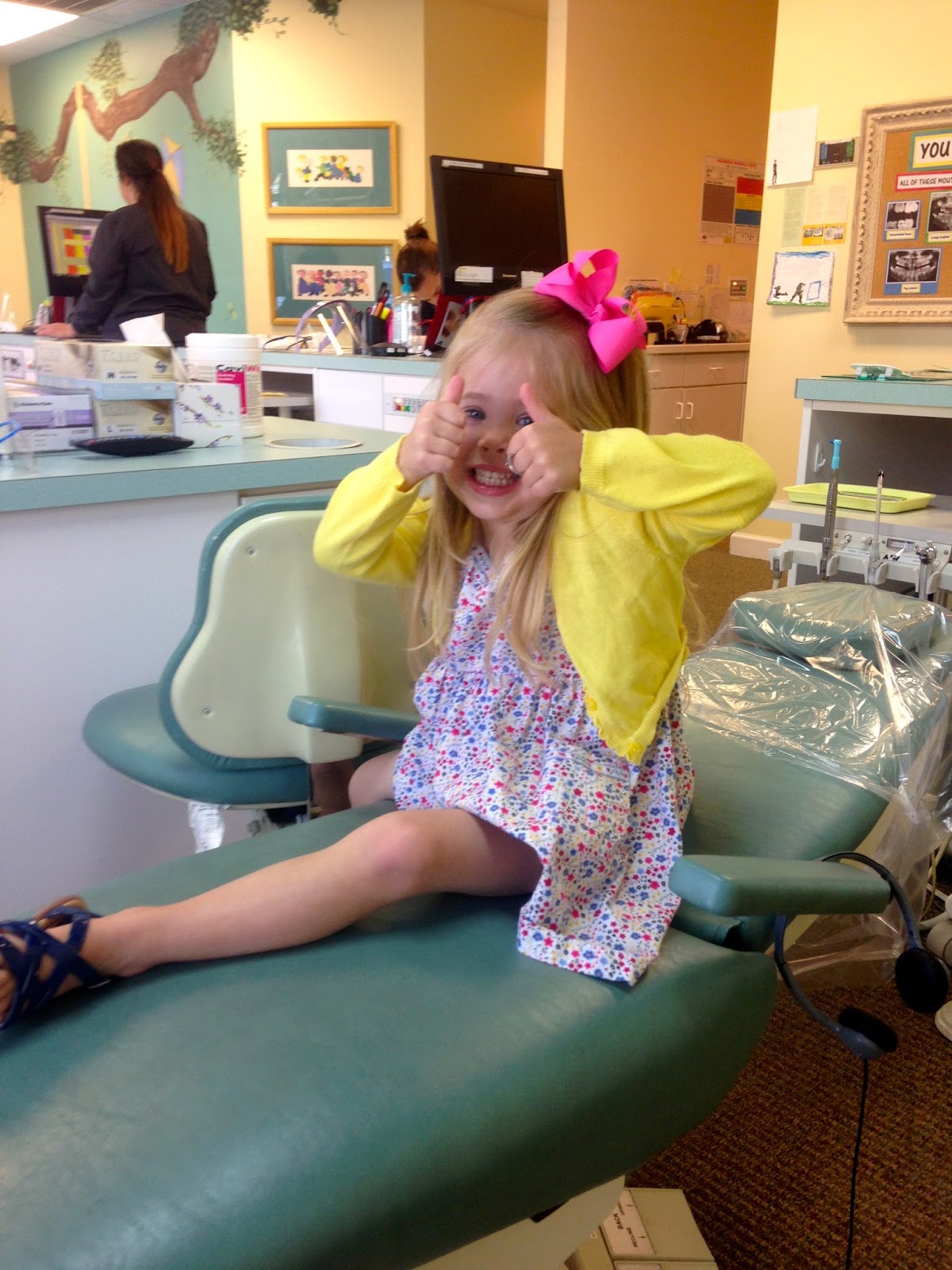 Britt did WONDERFUL for her check-up. I mean AWESOME. And she has such a HUGE mouth that keeping it open for the cleaning wasn’t a problem at all 🙂

Dr. Carly said that she has the most beautiful smile 🙂 Which made me laugh a little because Britt is known for her crazy smiles in pictures 😉 But she said from a dental perspective her smile is great. She has a lot of space for the future. She said with her teething history to expect her to lose her first tooth much younger than Kye will. No cavities and Britt even did awesome for her first x-rays!

We did talk about Tess a little and about how I can go ahead and brush her teeth with a small toothbrush and use the regular toothpaste that I use for the kids. Just use a small amount! You actually shouldn’t even use a pea size amount they say. It’s just a tiny, tiny bit! 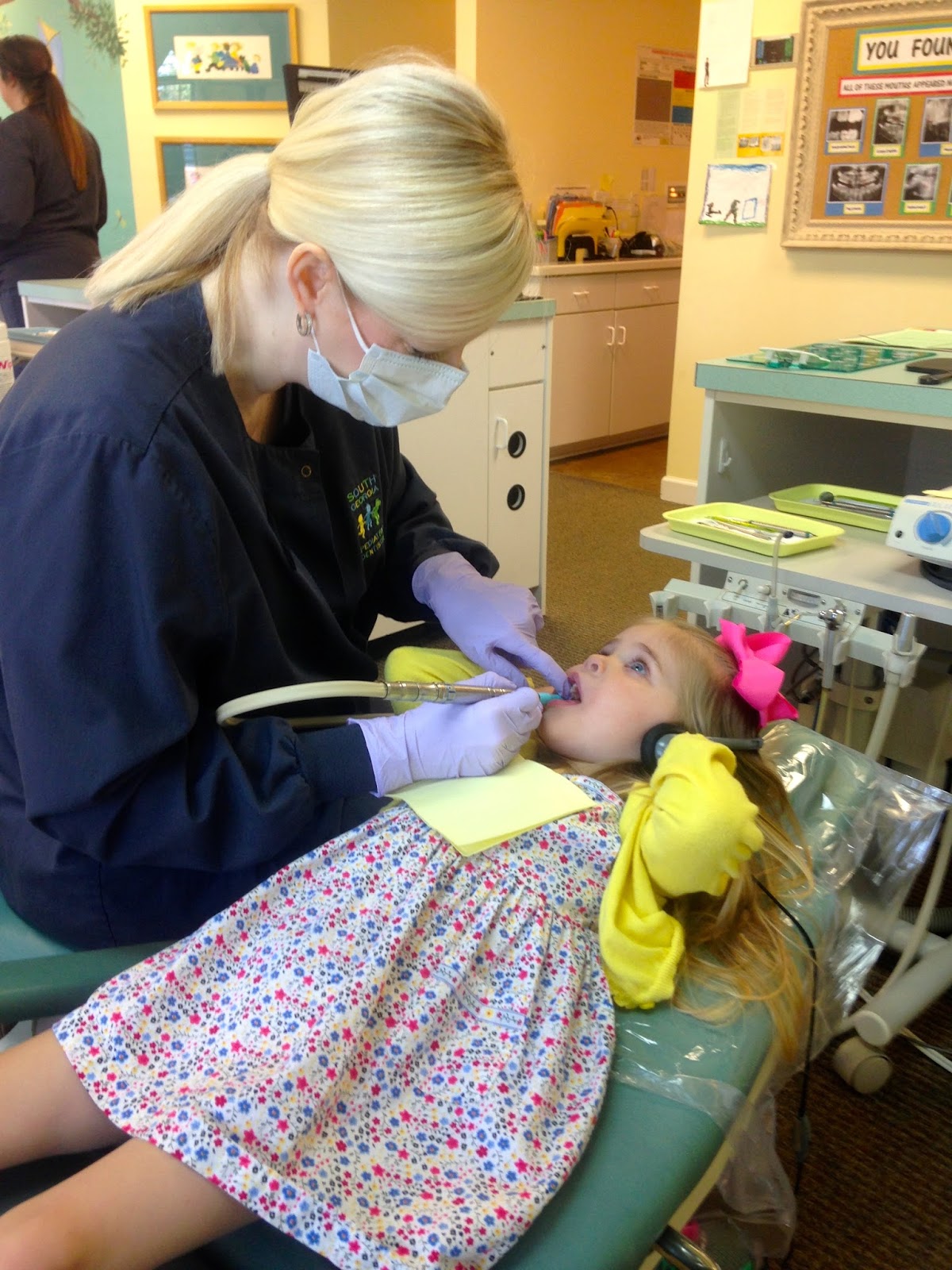 I was SO proud to be able to brag on Britt and how she stopped sucking her fingers. Miss Amy is a friend from church so she knew my finger struggle and she made a big production out of congratulating Britt on the achievement of quitting! Britt got to get a special prize from a special box 🙂 Dr Carly said you can tell evidence of her finger sucking but that she’s confident by next visit we probably won’t be able to tell at all.

I asked about Britt’s lips. They are SO big that they crack very easily and sometimes even bleed. She said it might actually be a side effect from the sucking and the best thing to use would be Aquafor on it. She also looked at the bump on Britt’s lip from when she busted it as a toddler. She said it’ll most likely stay there but that she won’t mind it as she gets older because it just gives her some added plumpness 😉

Of course Britt picked out some funky sunglasses as her prize! 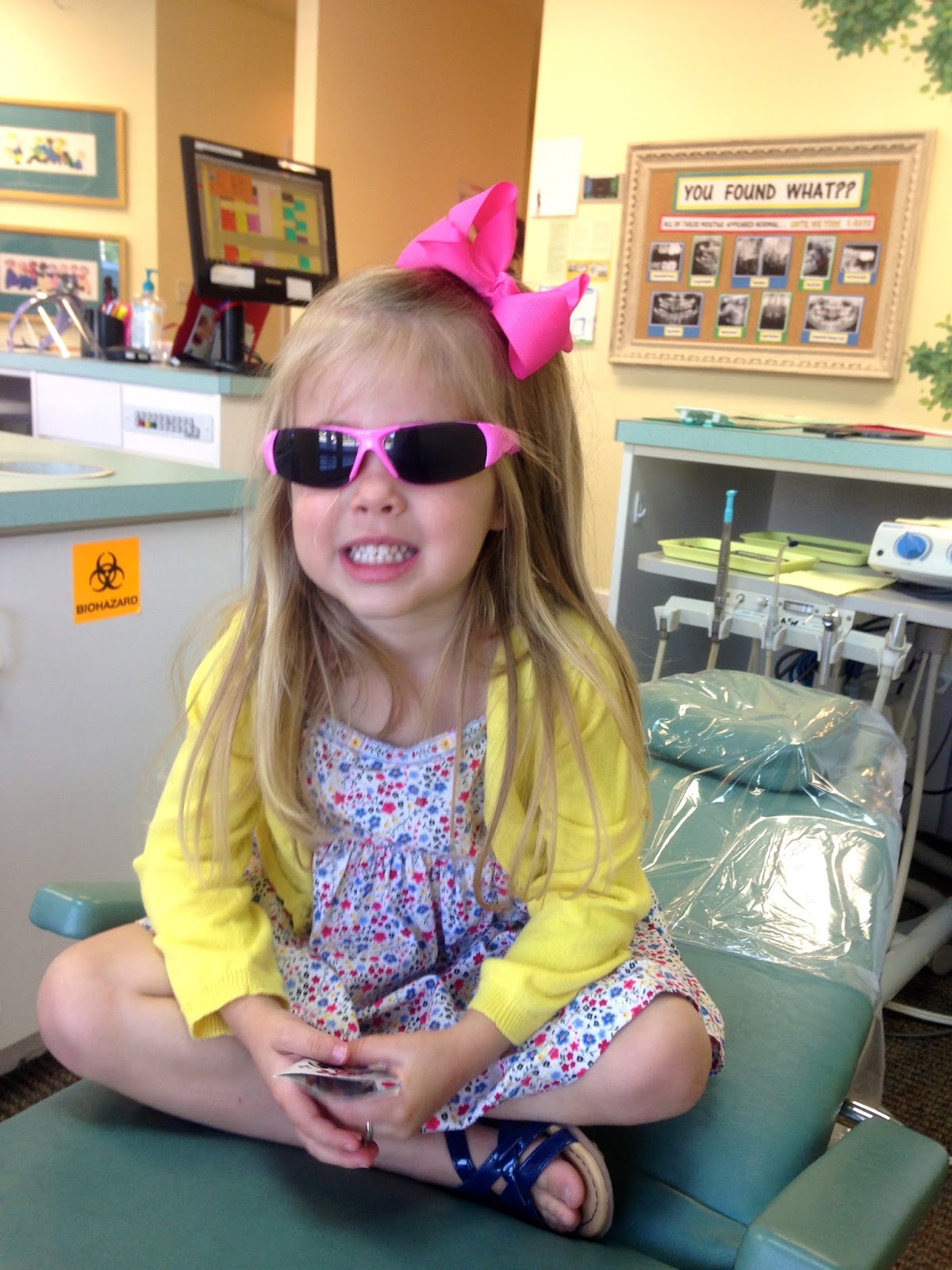 I was VERY proud of both Kye and Britt and their great behavior at their appointments! They both enjoyed being there and didn’t want to leave! If you are local then I HIGHLY recommend South Georgia Pediatric Dentistry! It was especially nice going this time because we just recently got dental insurance so the visit was free haha!