Britt’s 2 Year Well Visit was in Jan. It stinks b/c you HAVE to book the visit one year or later out from the last one and once you are off track, you stay that way. I think next year her appointment will be close to Feb. Oh well!

She did SO well in the waiting room and enjoyed having her baby there with her. She’s such a good little mommy 🙂 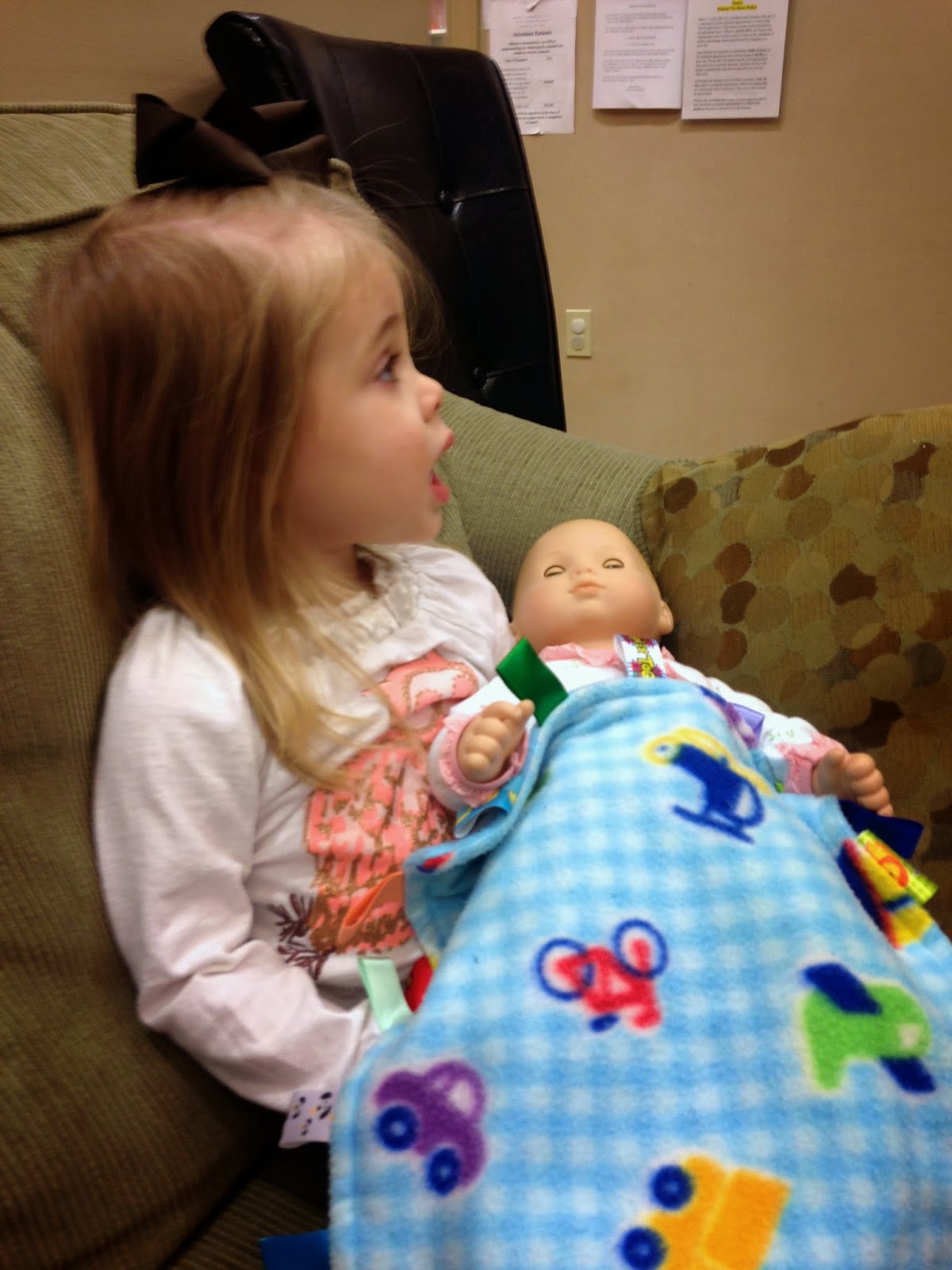 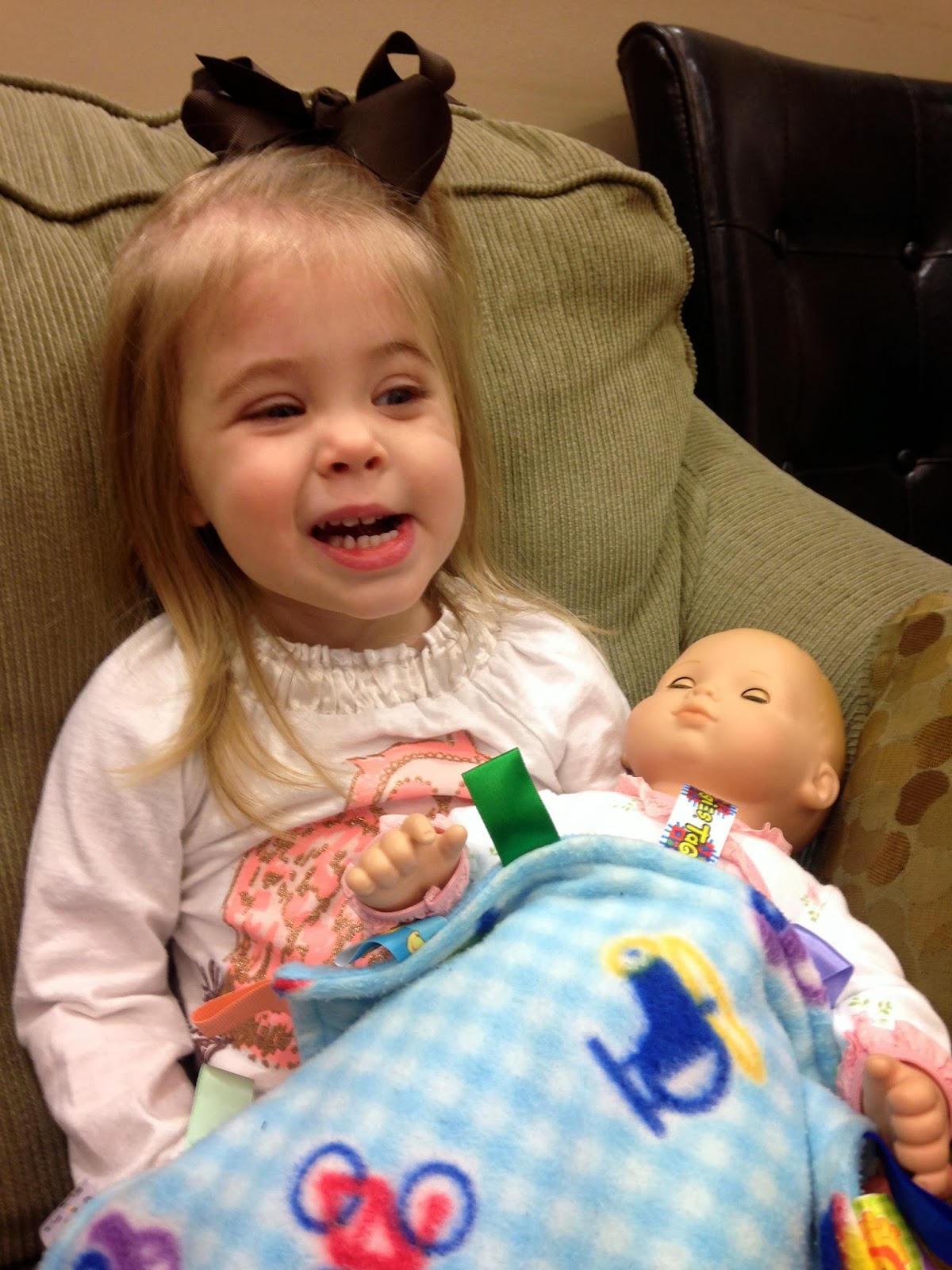 When we got there they took her stats. At two years old Britt weighs 25 lbs and is in the 25th percentile. She is 36 inches tall and is in the 90th percentile. And her heads 17 and 7/8s inches around which is in the 5th percentile. Child is all over the place on her percentages haha! She’s an inch taller than Kye was at the same appointment and weighs 3 lbs less and has a smaller head by 2 inches. He was always the same percentage across the board (this appointment he was 75th I believe).

It’s funny because when we got Kye’s 2 year stats I rushed home to figure out how tall he’ll be as an adult. “They” say you can double the childs height at age 2 and that will equal their adult height. If that’s true then Britt will be 6 foot tall! Dang! I did go check on the Baby Center Height Predictor and it says, based on her two year stats, that Britt will probably be around 5 foot 9 inches at age 18. I cannot IMAGINE her being that tall!!! I’m only 5’2″!

I don’t take the online thing very seriously though. I know from ALL our growth stuff with Kye that it’s not accurate. The growth specialist said that actually Kye will probably take after Zach in his height and Britt will take after me. I know they don’t look like it now!!! But I was actually an “early bloomer.” I remember being taller than my classmates in early elementary school. I got my period for the first time at age 9 and had to wear deodorant in the second grade! My bone age (from what Kye’s dr told us) was older than my actual age. Which means I stopped growing when I was very young. Which is true. I’ve worn the same size shoes since middle school! I even have some clothes that still fit from then! Because Britt is so tall at such a young age that probably means her bone age is also older than her actual age. Kye’s growth dr loves to say “loyal daughter/son” and that’s what she says about both of our kids. Britt is a “loyal daughter” in that she will probably follow my path of growth and development. Kye is a “loyal son” in that he will probably follow Zach’s (more on Kye’s growth in another post but basically Zach kept growing after high school which means his bone age was always younger than his actual age, and so is Kye’s! Growing up they actually thought Zach would be around 5’9″ as an adult and he’s actually 6’6″!).

Zach came with us since it was a shot day! 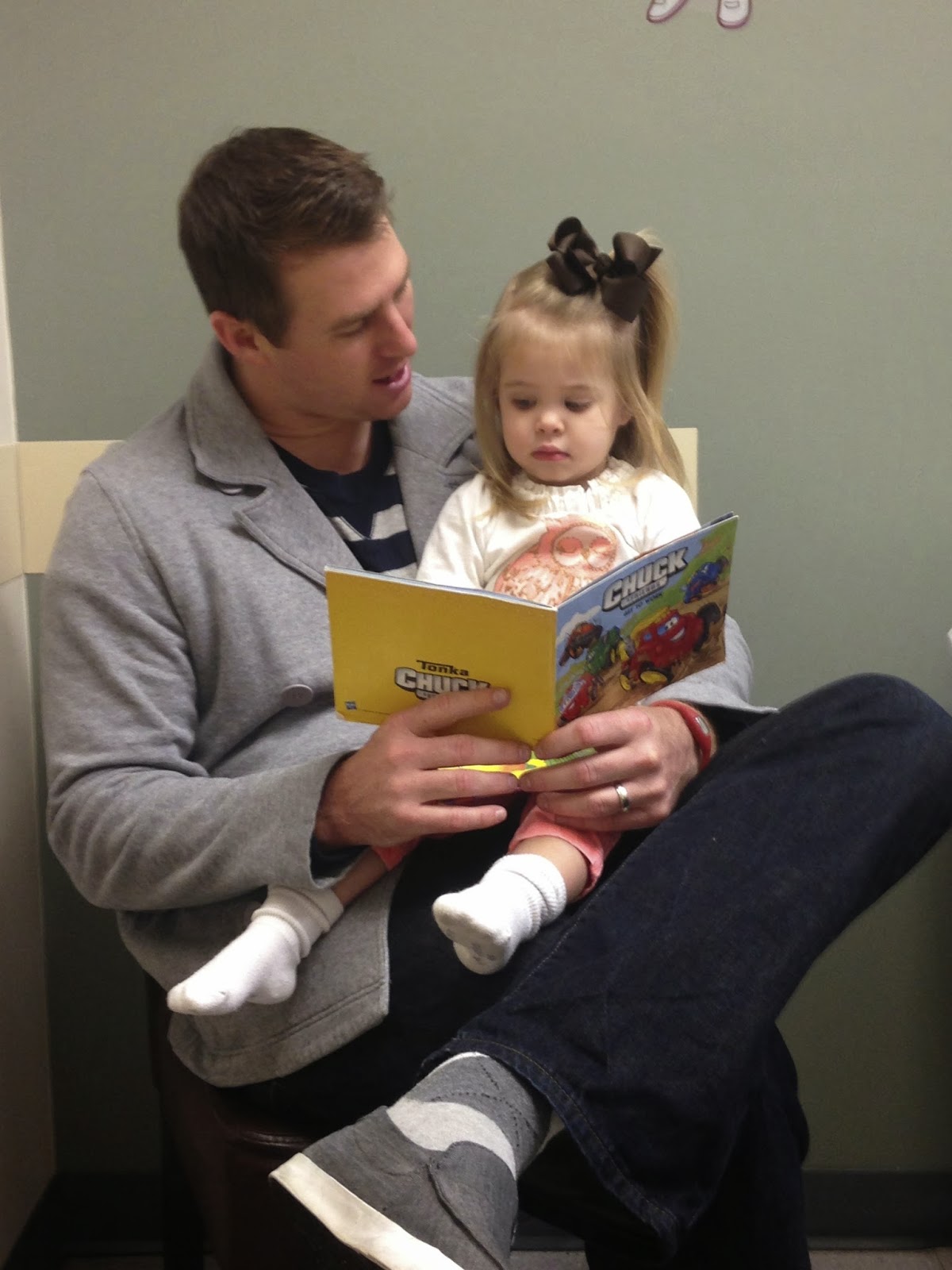 Britt did AMAZING! She totally blew me away! We play doctor a good bit at home and I really do think it helps to prepare the kids. I also try to be very honest with them and tell them in advance what will be happening. Even shots! I let them know that they will get a shot and it will hurt for a second and then it will be over with. I think knowledge is power and it helps them to prepare for what’s ahead! 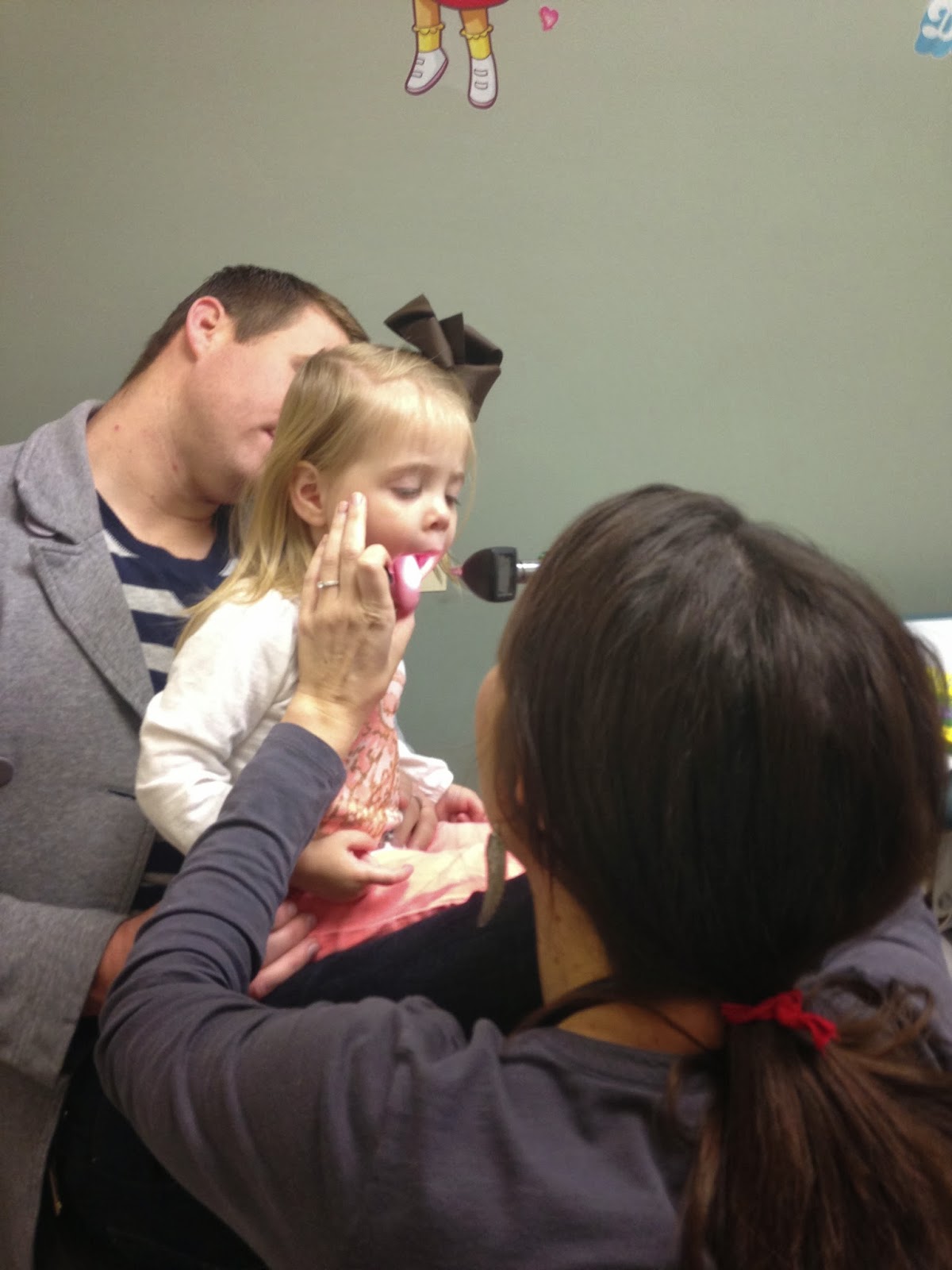 As usual, there were comments on how “perfect” her ears looked! My kids just have great ears and I’m thankful not to deal with ANY ear infections as of yet! 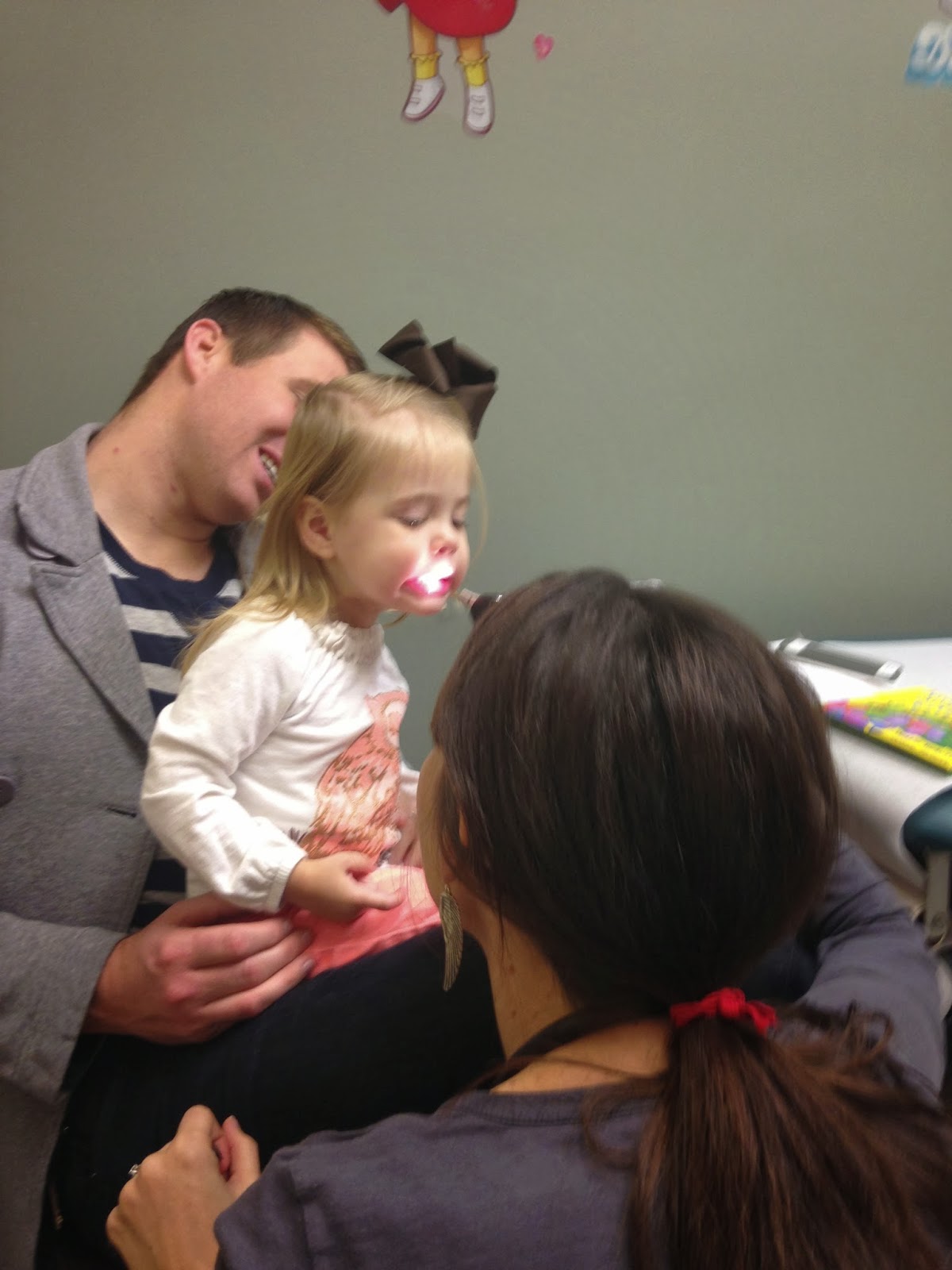 Our active child! She just wanted to climb up on the stool and jump off of it over and over while we waited! 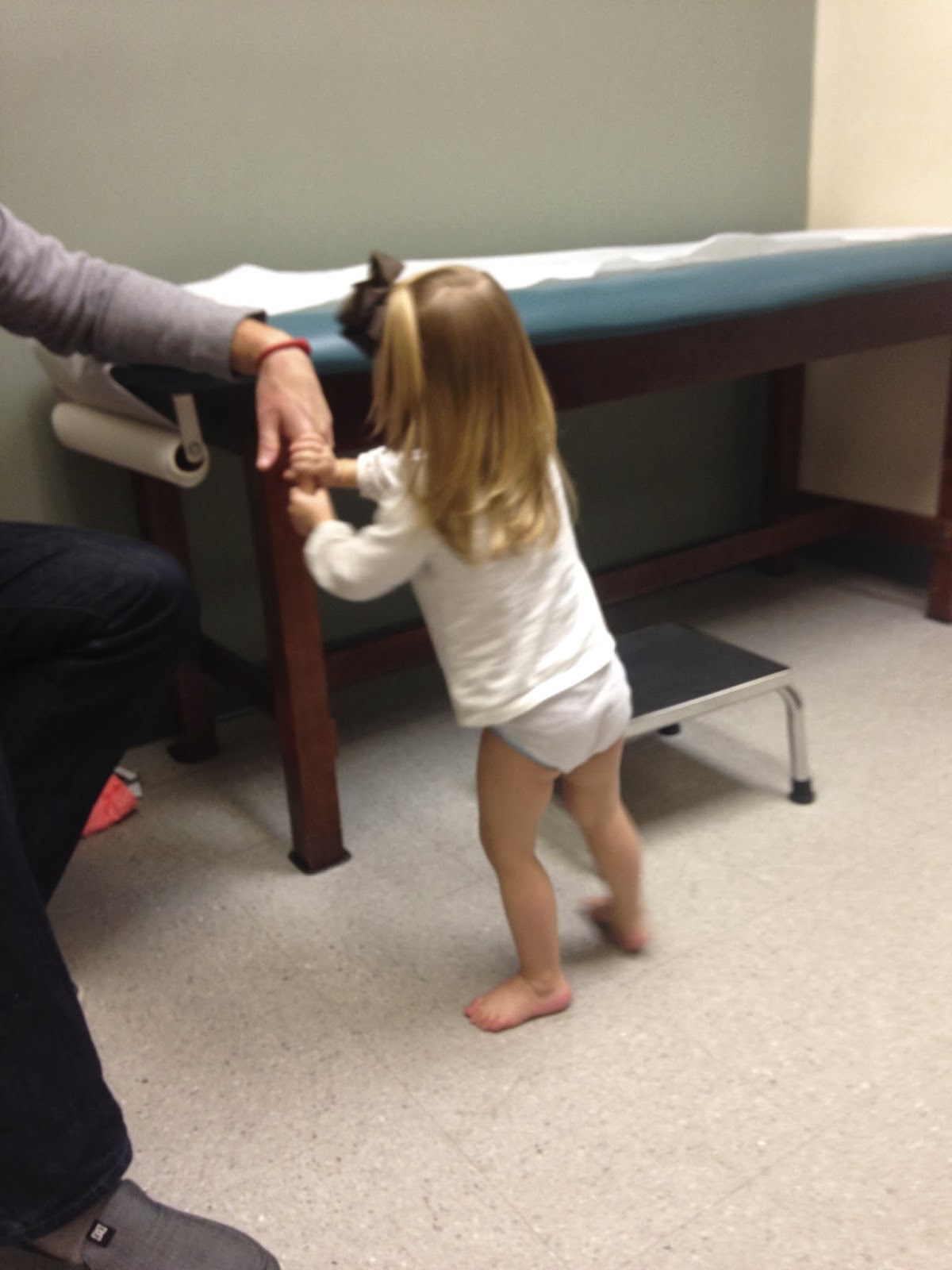 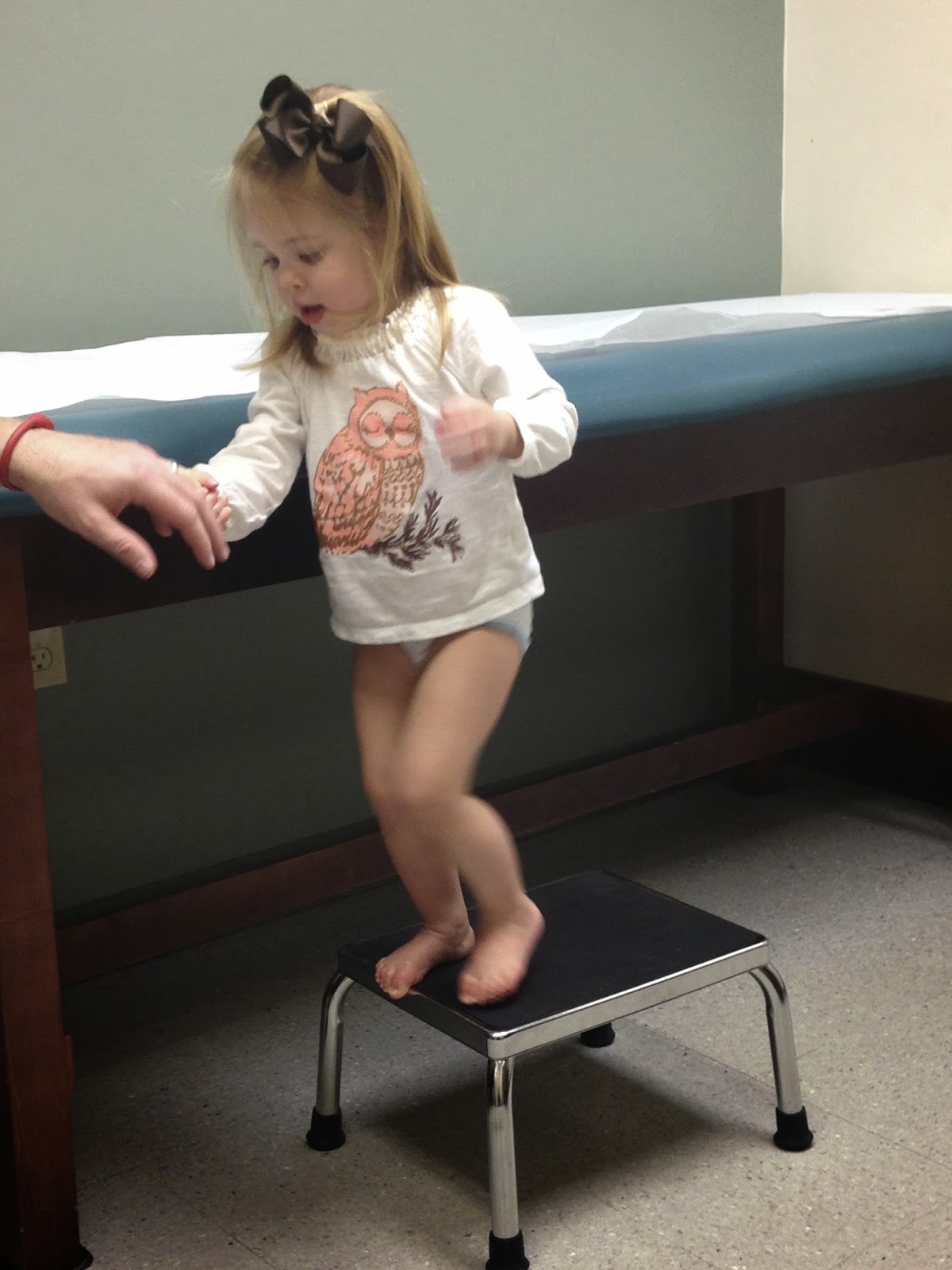 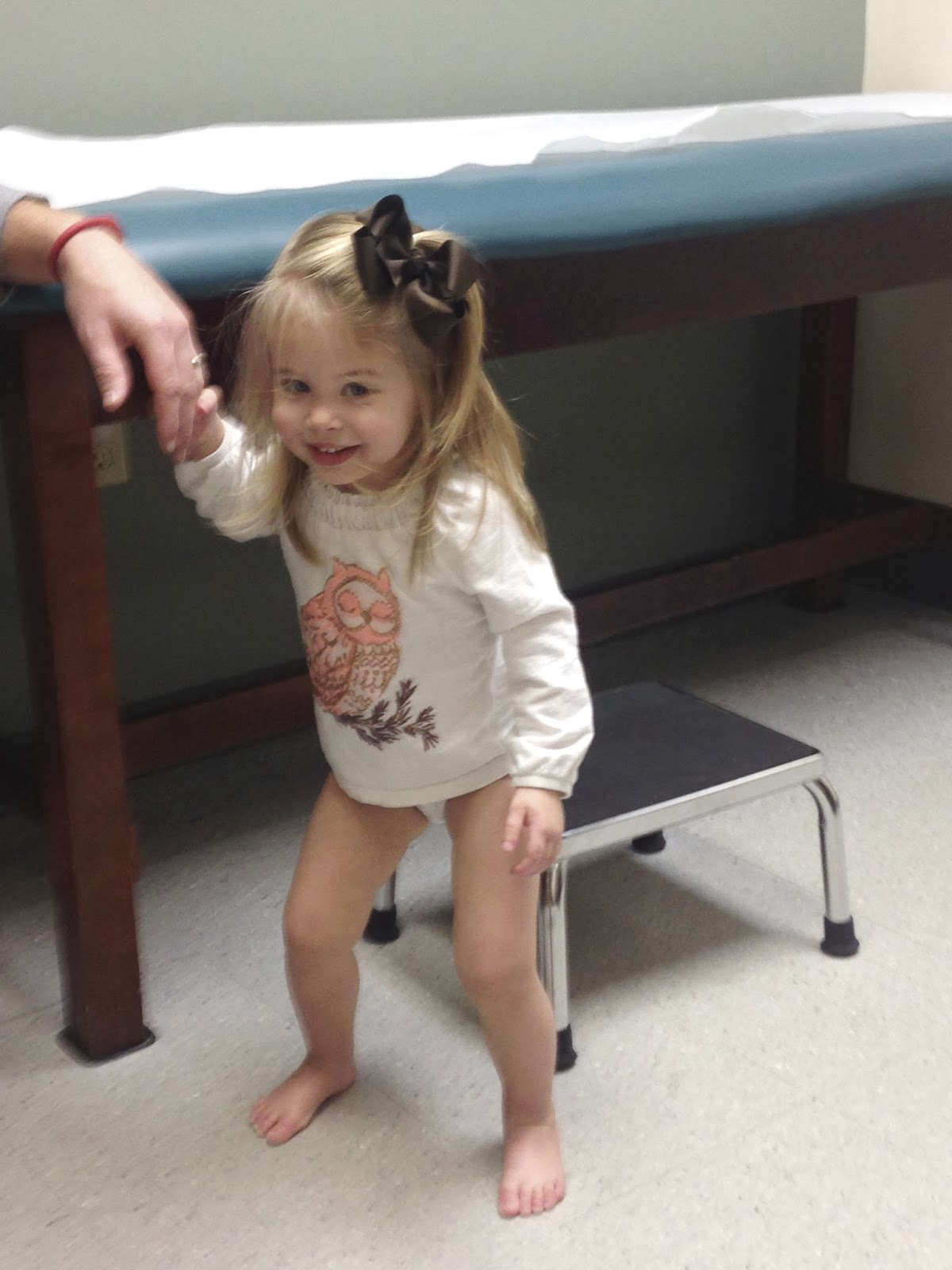 Kelly came in and it was wonderful catching up with her! I truly LOVE our pediatrician. If you use their office (Dr Griner) and have complaints…don’t come to me about it b/c I will defend them to the death 🙂 Seriously, I LOVE THEM.

She had heard our pregnancy news and was SO sweet and excited! Like she probably hugged me 3-5 times! It made my heart happy because so often with a third baby people aren’t all that thrilled about it. She really is so sweet and genuine!

Here are things we covered in the appointment:

I couldn’t help myself but to tell Kelly that when we went to the walk-in clinic over Christmas for Kye being sick that he’d grown 3 INCHES!!! I knew she’d be excited about that and she was 🙂 She said she felt very positive about our upcoming Tallahassee specialist appointment and that made me feel even more positive about it 🙂

We went over the checklist of developmental stuff and Britt really is off the charts in every area. I am not one who really brags on my kids a lot but I LOVE these well visits because it’s kinda a chance to be that proud mama 😉 Kelly even said how it’s not common for a second child to be so ahed of the game like she is, but I really think a lot of it has to do with Kye. She idolizes him so I think she strives to be able to do (and say!) all the things he does and says. So far, she’s succeeding in that goal!

I was still chatting it up with Kelly when they came in to do Britt’s shots and toe prick. I didn’t get out of the room before the toe prick went down but oh my gosh y’all. Britt was hilarious! They pricked her toe (hemoglobin was good btw) and she didn’t miss a beat and said “do the other one!” and stuck out her other big toe! SO funny!!! I did leave before the shots (She had the hep A and I think that’s it?) but guess what? She’s didn’t even CRY. Um. WHO is this child?!?!?!? Zach and I couldn’t believe it!!! So proud of her for being so tough about it!!! She really does take after her big brother 😉

I’ve known about the changes in recommendation regarding Tylenol after having shots but our office was still recommending it so I had still continued doing it. This time Kelly did say that they now recommend not giving the Tylenol unless the child has a fever or other issues after the shot. Britt was FINE and acted like it was no big deal at all so I didn’t give her anything for it! Hope all future shots are as easy for us with her!!! 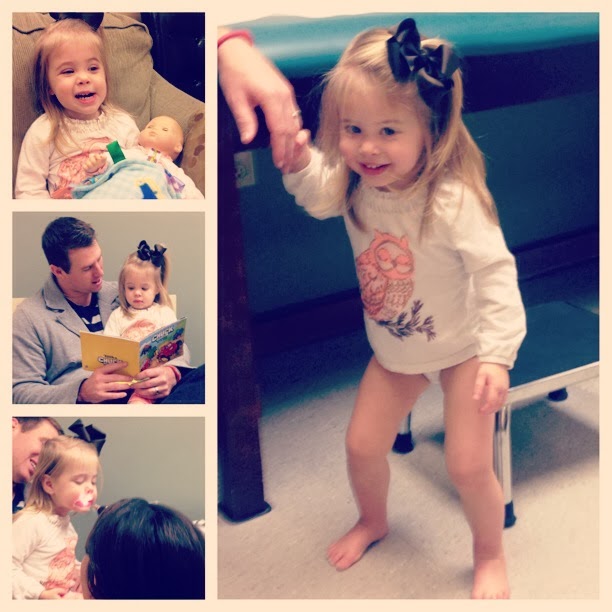 I am always SO thankful for wonderful well-visit reports! I know how quickly life can change and I appreciate all the current blessings we enjoy with our healthy children!!! So proud of Britt and what a big girl she was for this appointment!

You can compare back to Kye’s 2 Year Well Visit HERE!