On June 18th we had Britt’s 18 Month Well Visit. It is C-R-A-Z-Y to me that this child still has yet to go to the dr for any type of visit other than a well visit. I’m so thankful she has been so healthy! Now that Kye is back in school I wonder if her time for sickness is near? Guess we will see! Thankful for my healthy little girl 🙂

This time I came prepared for our wait with snacks, toys and books to keep them busy! They had fun playing together and the wait wasn’t too bad 🙂 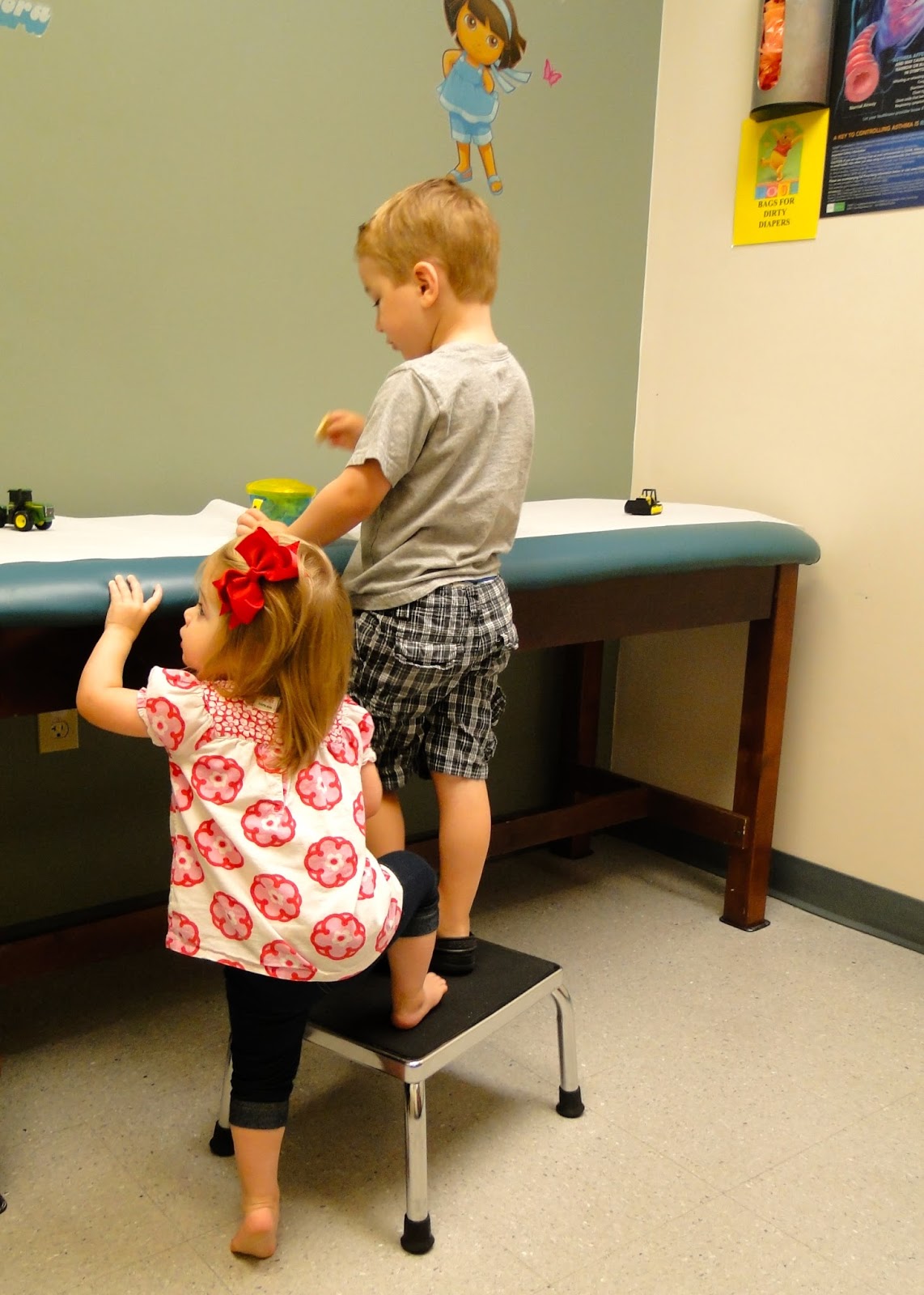 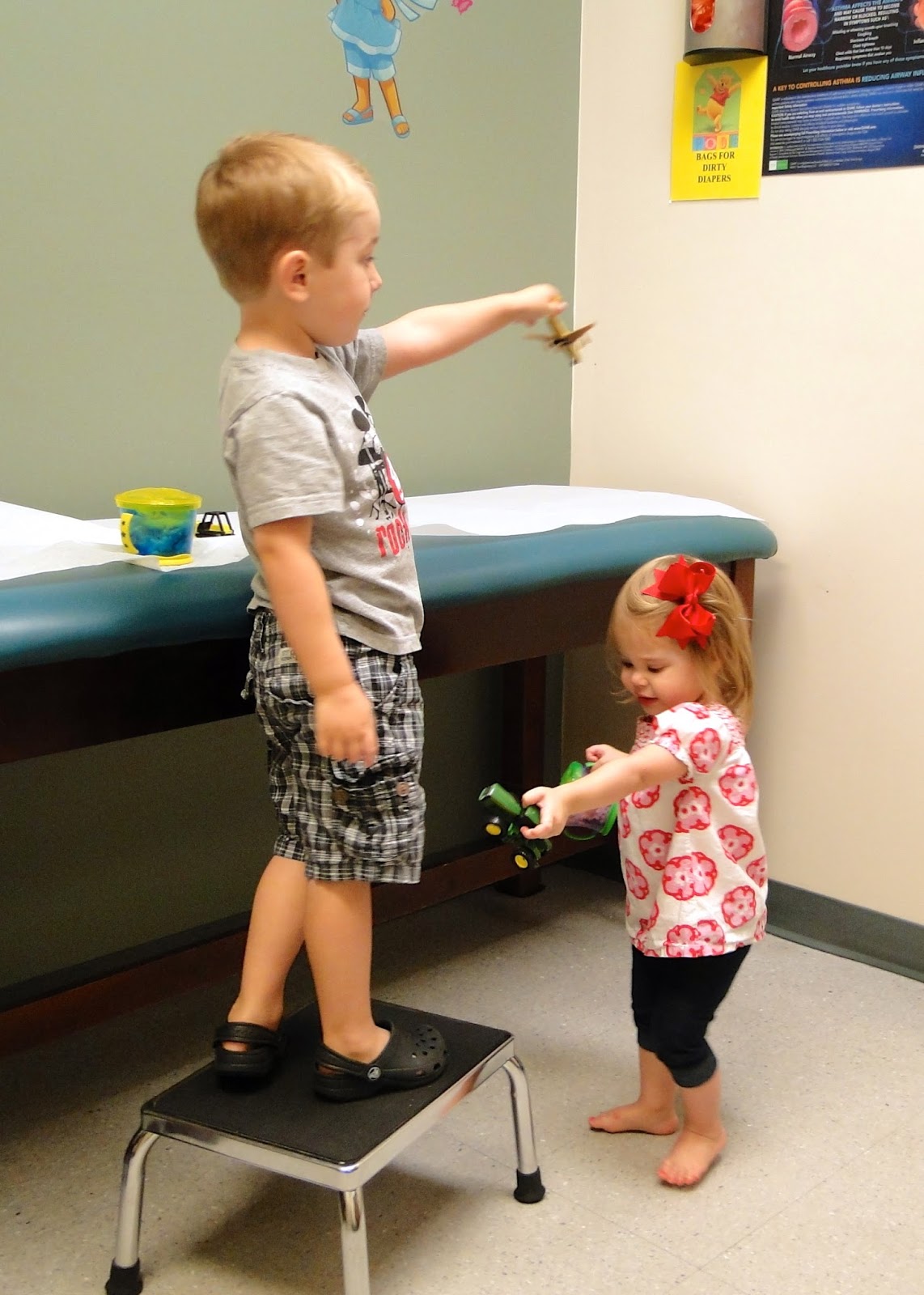 Kelly came in and asked us some questions and also answered mine for us. It was so interesting to me that they asked if Britt is sleeping through the night?!?! Are you kidding me? I cannot FATHOM not having a baby sleep through the night at this age! I don’t know how mama’s function all day on broken sleep like that!

A big portion of my questions had to do with Kye, which I feel a little bad about since it’s was an appointment for Britt. However, our last appointment for them both was the one where we first started the whole growth delay concern stuff and I wanted to catch Kelly up to speed on everything, ask about nutrition to make sure he’s growing properly, and thank her so much for catching it! I know there isn’t much we can do to help Kye grow at a faster speed, but Zach and I both agree that we want to go into his next specialist appointment in February feeling like we did all we could to help the situation. I’m big about that with all areas of parenting: I always want to be able to lay my head down at night knowing I did MY BEST for my children. I never want to have those little doubts or “what ifs” or “maybe I should haves” keeping me awake at night!

Up until recently I’ve always given Kye a chewable multivitamin from the store (the Flintstone brand) but I started thinking about it and decided to switch him to an Advocare vitamin once a day. I get a great discount since I’m a member so it works out being about the same cost as the grocery store chewables. Plus I trust Advocare products. I use them myself and know they are legit…so why was I trusting a random brand that I don’t know and don’t use for my children? With that idea in mind I printed off several products that Advocare sells and had Kye’s dr look them over and we discussed what would benefit him. She said the most important thing is making sure both kids get enough Vitamin D and that they are finding a lot of issues derive from a lack of Vitamin D. She also said that the key to making sure Kye is growing properly is the Vit D but also calcium! She read over all the ingredients and said that it’d be beneficial for Kye to have one of each of the three types of chewables Advocare makes each day (each type offers a different benefit) and that the meal replacement shakes would be okay to boost calorie intake. I don’t give him the shakes regularly but I’ve been working on healthier “special treat” options and use them as a “milk shake” special treat. I plan to do a blog post about all of this soon!

We also talked about vitamins for Britt and I don’t feel comfortable giving her any Advocare ones yet as the packaging says ages 4 and up. I brought her vitamin with me for Kelly to look over (I use a liquid one that is a multiple vitamin with iron) and she said it would be great to keep using that and to make sure it had at least 400-600 iu of vitamin d in it as each kid needs that much per day! She said it’d be fine to give Britt some of the Advocare chewable with Vitamin D if the liquid one didn’t have it but I checked and it does so I’m sticking with the liquid for now 🙂

Now that Britt is older and bigger she gets a higher amount of infant Tylenol. With all the changes they have made I am always careful to get the correct dosage and I love that our pediatrician gives us a print out at each visit to let us know how much is appropriate. Since she’s between 18-23 lbs and is between 12-23 months then we need to give her 3.75 ml of the “new” concentration formula. We rarely have to give her Tylenol but do it after she has shots and since she had shots at this visit I gave it to her for the 24 hours following the shots.

Here are some other things we discussed at this visit:

Zach’s mom and sister both have auto immune diseases and when you trace the family line of their history it makes it clear that our daughters are the ones who will most likely be affected. It travels through the father’s side but it’s the women on his side who suffer from the auto immune diseases. Mrs. Charlotte’s dad’s mom had it as did his sister (so her grandmother and her aunt on her father’s side). Well Mrs. Charlotte is Zach’s mom and Courtney is his sister making them Britt’s grandmother and aunt. We knew all of this prior to having children and while it’s very scary, it’s not like there is anything we could do about it anyways! Now that Britt is getting older I wanted to talk to her drs about it and just let them know our concerns and also see if there was anything preventative we could do or any tests that we could run to see if she was predisposed so we’d know to be on the lookout for any issues. I figure the sooner we catch it, the sooner we can treat it right?

Kelly left the room to talk to Dr. Griner about it all and came back and discussed it with us. She said that even with Britt’s family history, there is still ONLY a 1-2% chance that she will have an auto immune disease. There IS a test that we could run to see if she’s predisposed, however, it is commonly a “false positive” type test and it will say that one out of every eight women are predisposed when that’s simply not the case. It’s kinda like the test they do when you’re pregnant to see if your baby has any chromosomal issues. I’ve never had that test with my pregnancies because it is so often a “false positive” and I wouldn’t want to worry for no reason. Plus what would it change? I’d be keeping the baby either way! And that’s the same with Britt. A false positive would just give us concerns we don’t need to have and wouldn’t change the outcome anyway.

They said it was good to have it on her records and something they need to be mindful of and that we need to be aware of as well. As she gets older we will be more cautious to be on the look out for potential symptoms etc but for now the best thing Kelly said we can do is make sure she’s getting enough Vitamin D! I’m just going to focus on that, and let the auto immune disease concerns completely erase from my mind. Much like I have Kye’s growth delay stuff 🙂

Even with our concerns, this was still a great appointment. I’m so, so blessed to have such healthy children and it’s something I never stop appreciating nor do I ever take for granted. It can all change in an instant and I try to savor every second I can 🙂 Kelly told me the sweetest compliment. She said she had been taking her child to swim lessons and was talking to Kye’s swim instructor and somehow I came up in the conversation and she said they were both talking about how I am like the poster child for what all moms should be. I felt so honored that two people I admire so much would say such kind words about me! Def made my day and helped give me that confidence boost that I’m doing a good job 🙂 As a mama that’s the best compliment we can get huh?

Britt got a lot of shots to end the appointment. She was given the Dtap vaccine, Hep A and checked her hemoglobin (toe prick) which came back good to go! She did SO GOOD for her shots this time! She didn’t freak out like usual haha maybe she’s tougher than we give her credit for 😉 Both kids got a prize from the treasure box for behaving so well and we made her 24 month appointment for Dec. Maybe I’ll get lucky and we will keep with the trend of no sick visits between! I have a gut feeling my no-sick luck is running out here soon but we’ll see!