We had Britt’s well visit on 12/12/12. I was pretty pumped that a) we are FINALLY back on track and b) we got to do something memorable on the last triple date we’ll see in our lifetimes 😉 I’m a nerd…I admit it! haha! I was pretty crunk that the little paper they gave me with her stats on it had the date written on it!

Her appointment was at 10:30. Kye was at school and Zach had a group in town so I let Britt get a bit of her morning nap then ran her up there and Zach met us there. It worked out GREAT! I RARELY wake her up early from naps but she handled it all really well. I realized during this appointment that she and Kye share a similar trait: they both get HYPER when they are tired. She was cracking us up!!!

Drinking a pretend drink in the waiting room 😉 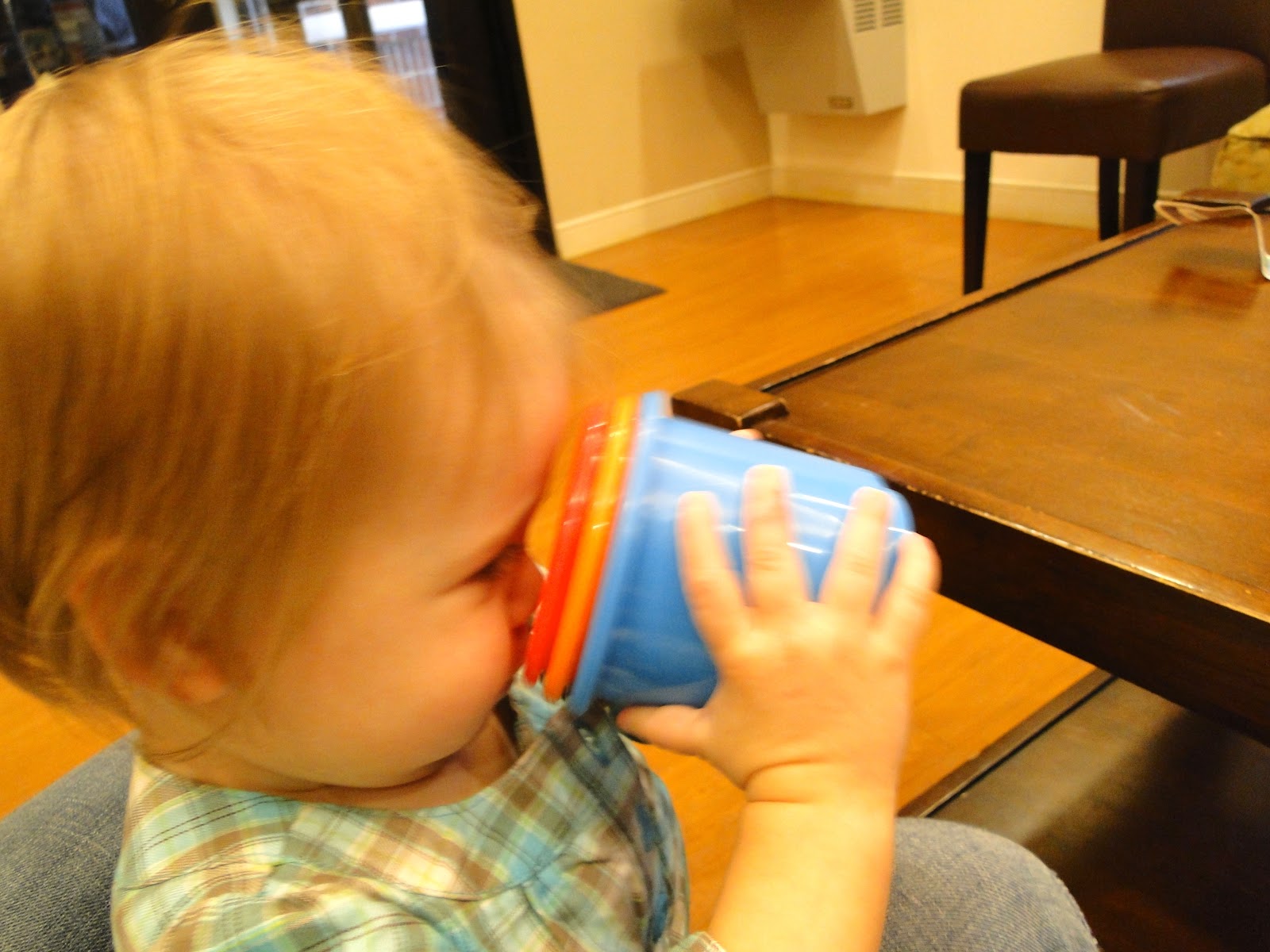 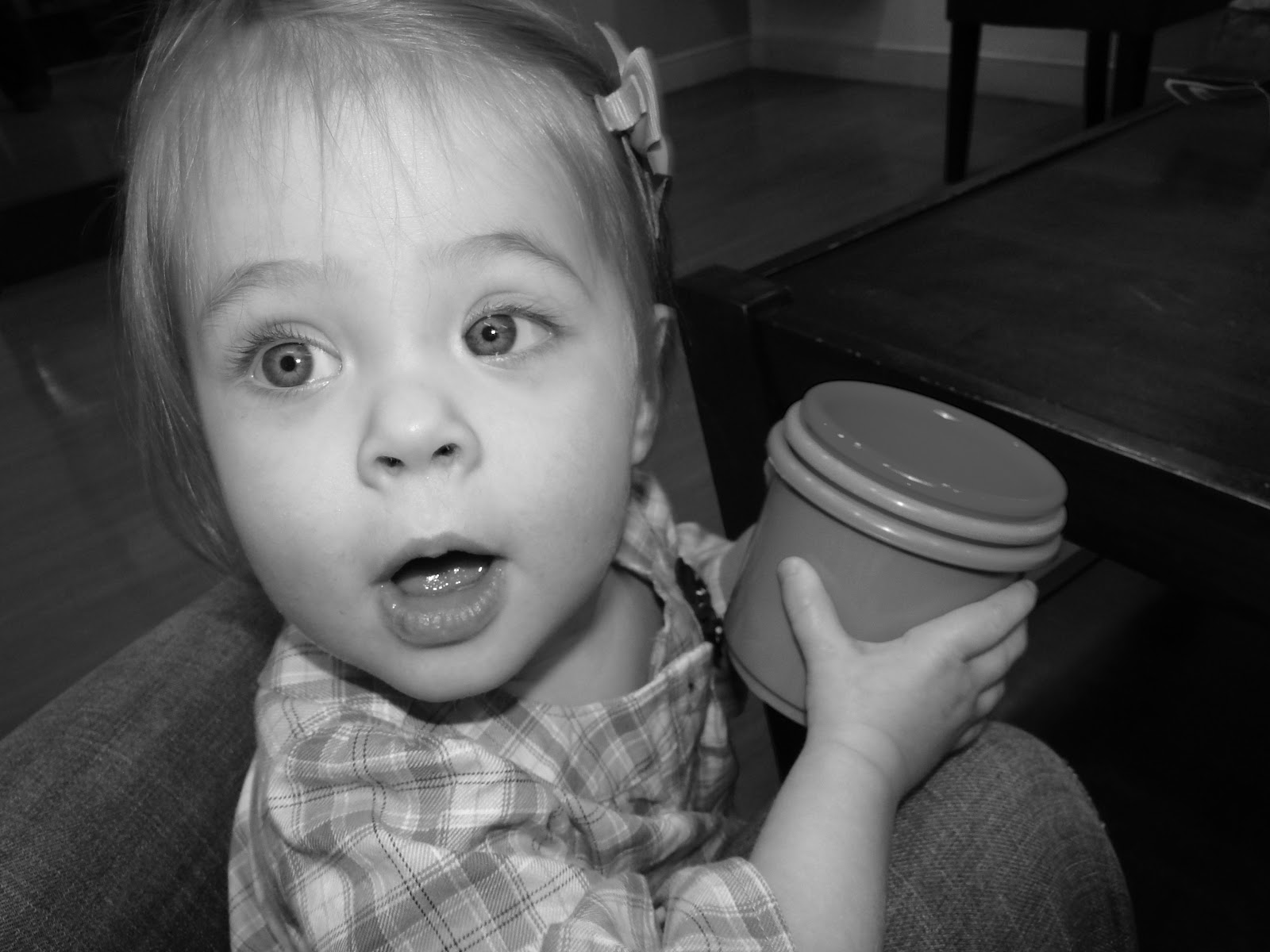 We saw Kelly yet again and can I just say I LOVE her?!?! I really haven’t ever met a SINGLE member of Dr Griner’s staff that I don’t like. They are all SO awesome!!! I often hear people complain about long wait times with his office but personally I think it’s WELL worth the wait. I never, ever feel rushed when we get back there and they truly give such amazing care to my babies. Plus…their walk-in clinic ROCKS!

It was a big deal appointment…Brittlynn no longer has to do the whole get-naked-and-lay-down on the scale thing! She was able to stand up on the “big kid” scale!!! She does still have to lay down on the table for them to measure her length but the scale thing makes the appointment SO much easier!!!

At 1 year old Brittlynn weighs 19.5 lbs and is in the 25th percentile for weight. She is 29.75 inches tall and in the 75th percentile for height. She is truly her Daddy’s child as her head circumference is only 17 1/8th inches which puts her in the 10th percentile. If you’re interested in comparing her size to Kye’s…at his 1 year appointment he was 24 lbs (75th percentile), 30.12 inches long (75th percentile) and his head was 18.75 inches. I’m glad to see that he was taller than she is! I love that Britt is petite but I don’t really want her to be SUPER tall…I know my friends with taller girls have a hard time finding shorts, skirts, and dresses long enough for them!!!

I forgot to give her Tylenol before the appointment so they were nice enough to give her some prior to her shots. I know now the recommendation is to not give them Tylenol prior to the shots…but I can TELL it helps her with the pain and I’m all about helping my kids! If I know something will help, then I’m gonna do it 😉

I also asked for another prescription for the higher strength of diaper rash cream. I had some left (that wasn’t expired!) from when Kye was a baby and I use it on Britt whenever she gets a bad diaper rash. I like to have it on hand when needed! Kelly also suggested if she gets a diaper rash to let her soak in a bath with 3/4 cup baking soda in it to help! I haven’t tried it yet as she rarely has any diaper rash issues but it’s good to know!

We talked about her development (I LOVE how many questions they ask in this area!) and Kelly made me feel SO GOOD. Britt is 1 years old but isn’t talking or walking. She said that is SO normal for a 2nd child and that she could tell that Britt was very active and very vocal by how crazy she was being in the room so she said she’s for sure right on track and not to worry about it at all 🙂 She also said she’s not concerned about Britt’s stats for her weight…that it’s OBVIOUS she’s very very active and is just burning off all the calories she eats!

I asked about foods to avoid now that she’s one and she did suggest waiting until 18 months or so for peanut butter. I told her we LOVE peanut butter in our house and that she’s never eaten it but has for sure been exposed to it (I’ll use the same knife to cut her food that I put peanut butter on Kye’s sandwiches…etc) so I’m not too worried about her having an allergy. She said it’d be fine to do it whenever I felt comfortable since we have no family history of allergies.

I asked her about potty training and told her we have been putting Britt on the potty before bath. She said to keep doing that as it’s a great way to get her used to the potty and help her overcome any fears etc with it. Just to keep it casual and let her set the pace on the training…that’s not easy for me but I don’t wanna hardcore train her until she’s walking and talking!!!

The proudest moment of the appointment for me was when Kelly noticed that Britt has NEVER been to the dr for a sick visit. I told her she has NEVER had a fever. NEVER had any medicine other than the Tylenol we give her for the shots. Never had even a tiny hint of a sickness of any kind!!! I TRULY believe it’s because I breastfed her for her entire 1st year of life (for this appointment I was still nursing her once a day) AND because I took better care of myself while nursing her. I honestly think that the Advocare products have made a BIG difference in her health too! The probiotic is SO awesome and helps keep away sicknesses…the coreplex with iron and omegaplex are overflowing with vitamins like dha and iron…she gets those good nutrients through my milk 🙂 Kelly also said that Britt staying home with me and not going to daycare makes a big difference too!

She had to get several shots at this visit…they did offer us the flu vaccine and I said no. I know I may TOTALLY regret it…but I’ve never given it to Kye or had it myself so why start now? Really Britt isn’t around very many kids. Even at church her bible class only has like maybe three babies in it. We’ll see what happens! But I’ve heard of kids having reactions FROM the flu shot so I’m taking my chances!!! She was a little fussy after the shots but really just needed LOTS of sleep and recovered fine 🙂

You can look back at Kye’s 1 year check up here!!!

Being our wild child! 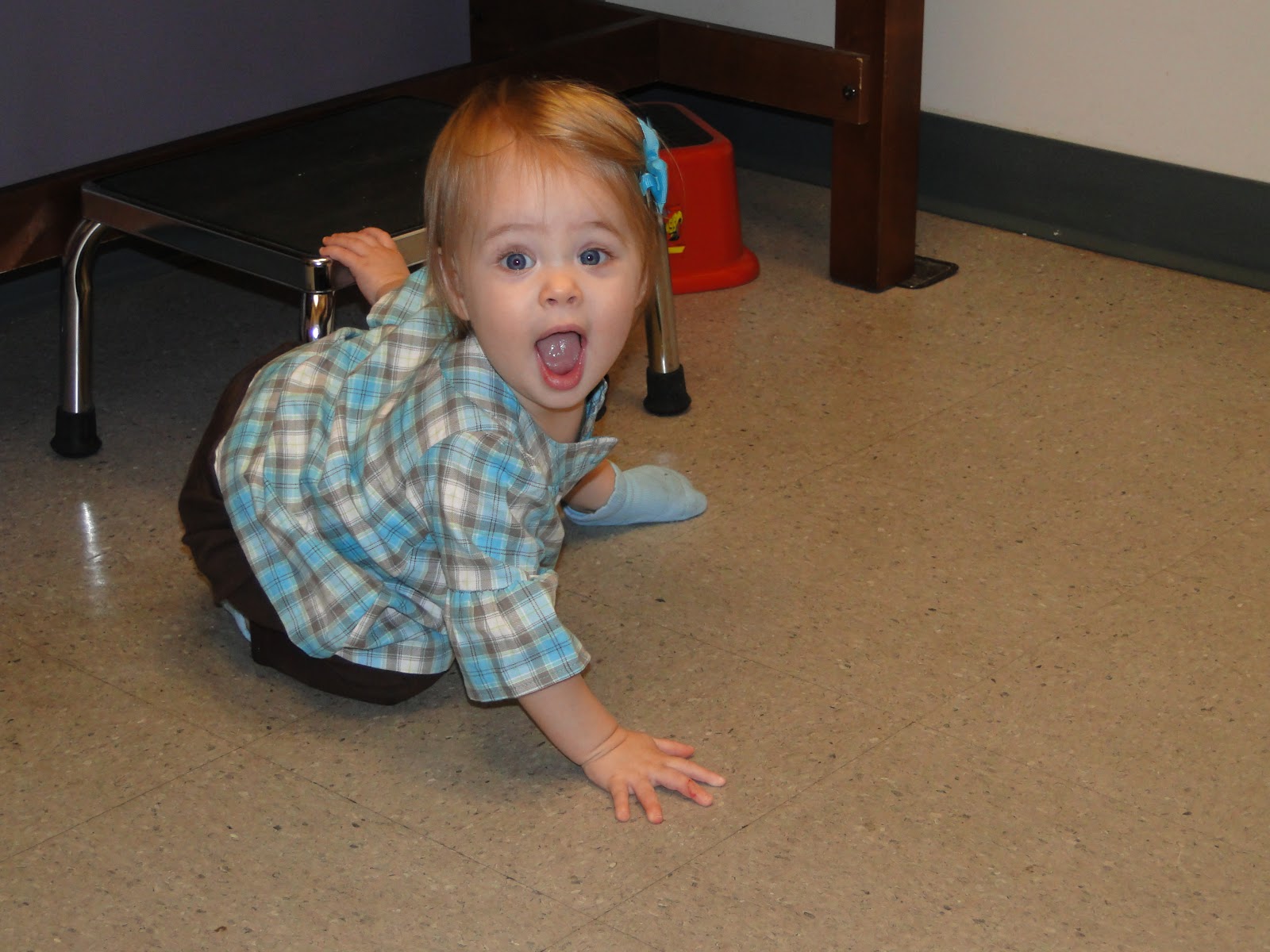 So proud of our sweet girl and how BIG she’s getting now!!! Hopefully she’ll be WALKING into her next appointment in March 😉