Brittlynn turned four months old on April 6th (so yes, in “real life time” she’s now 5 months old. I’m a complete month behind. Boo!). I got her monthly stickers from this store and I used What To Expect The First Year to see where Brittlynn’s at compared to the “norms” for her age group! 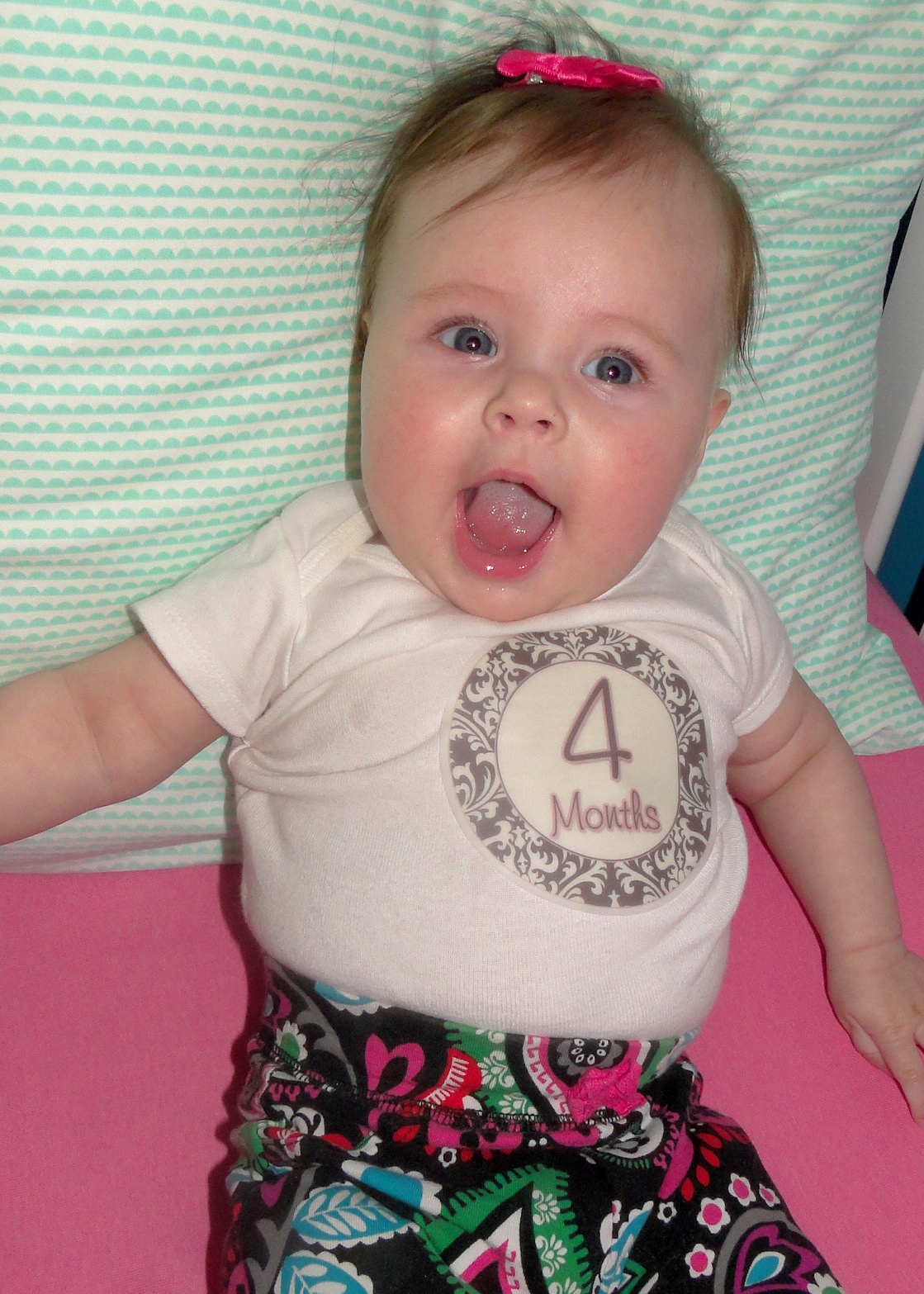 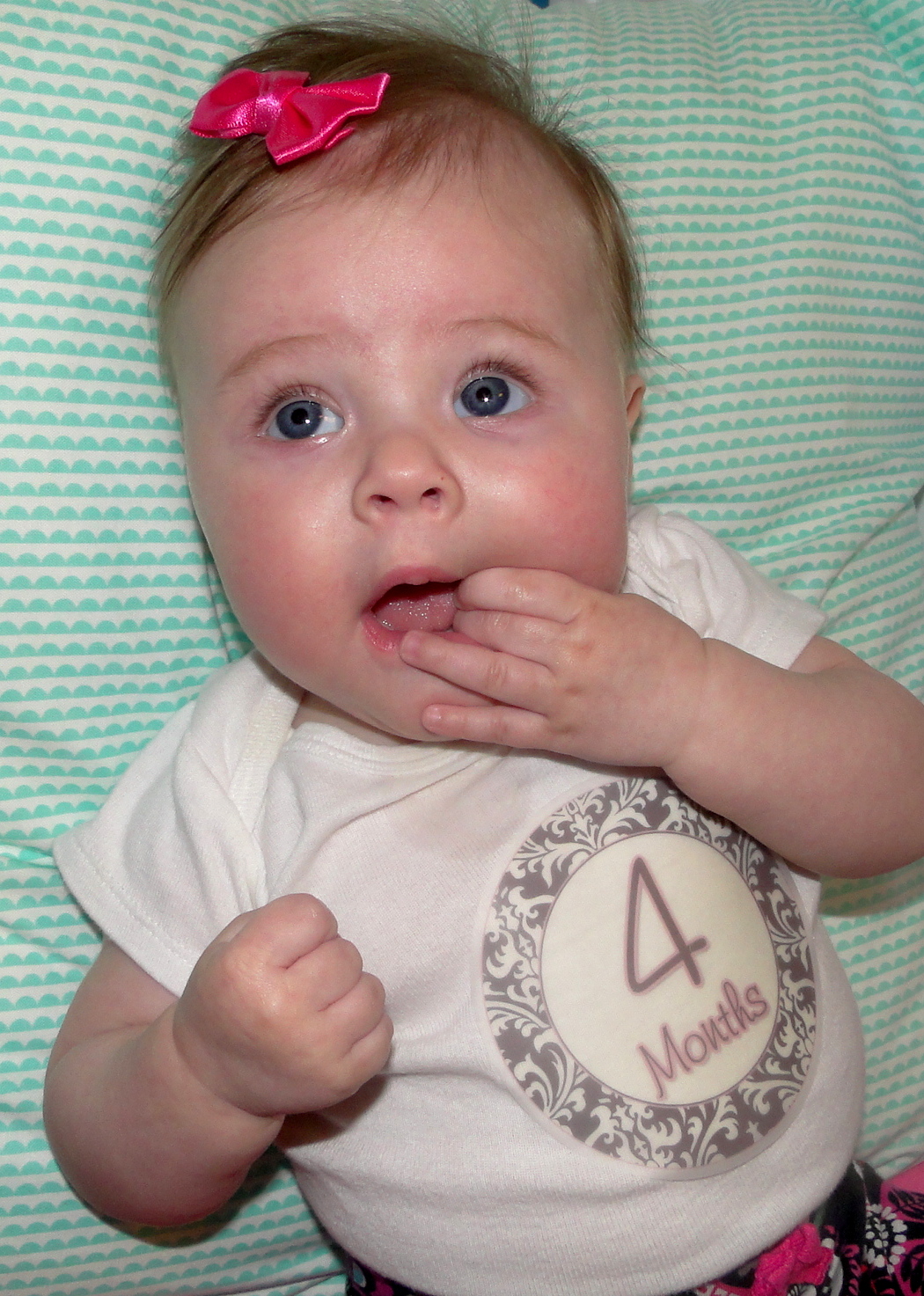 At four months old Brittlynn can do all the things a baby her age should be able to do including: 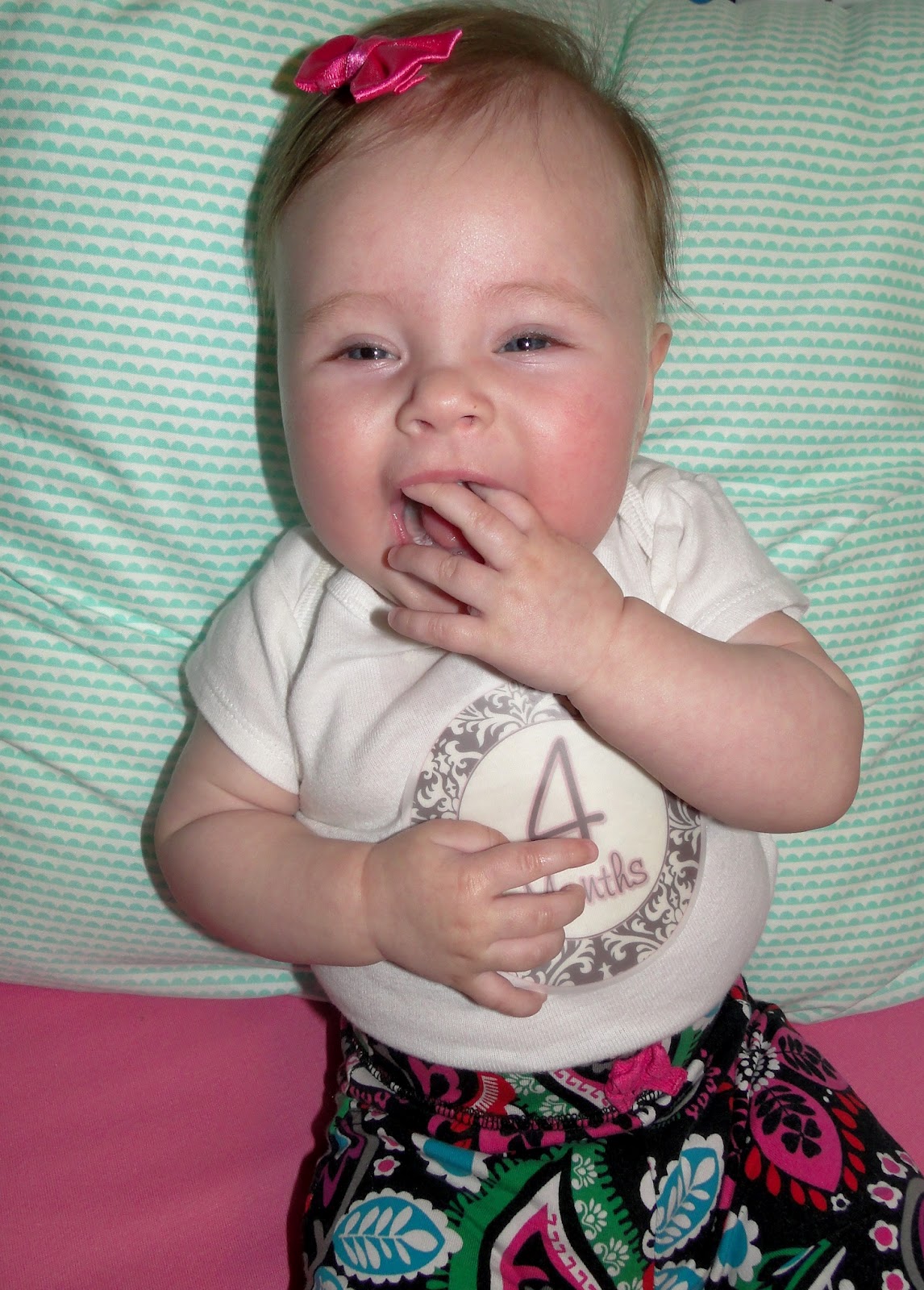 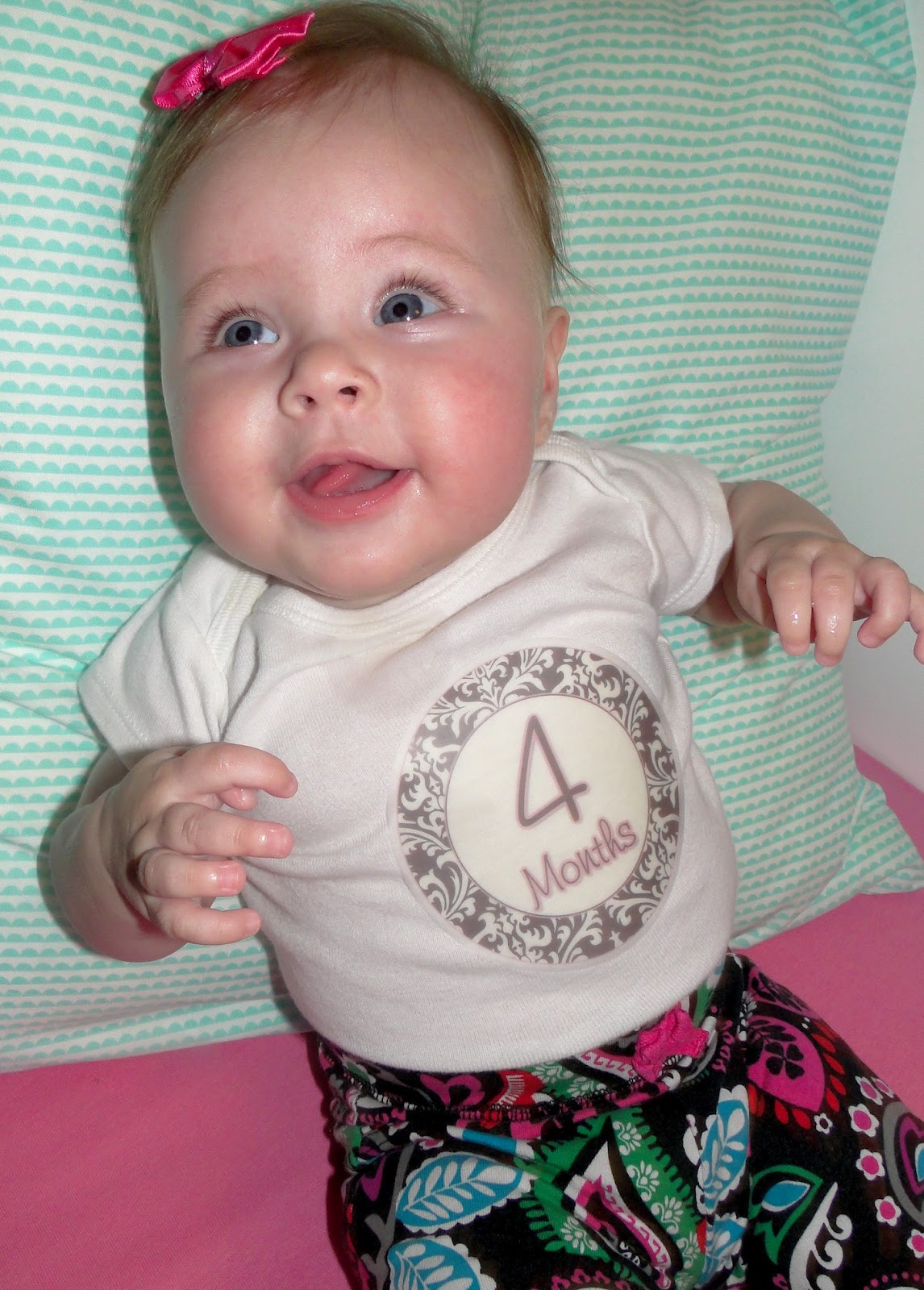 She can do all the things a four month old will probably be able to do including: 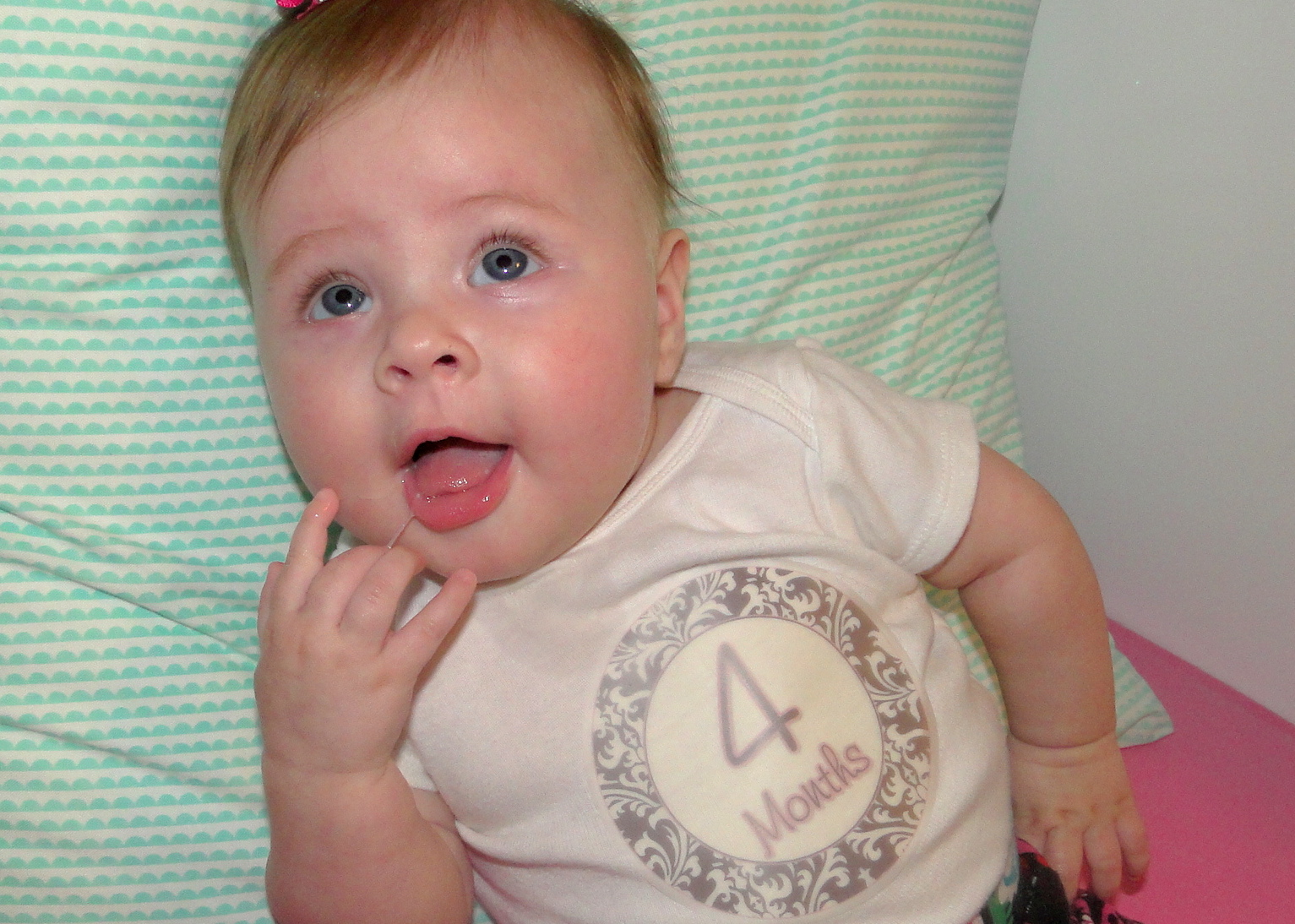 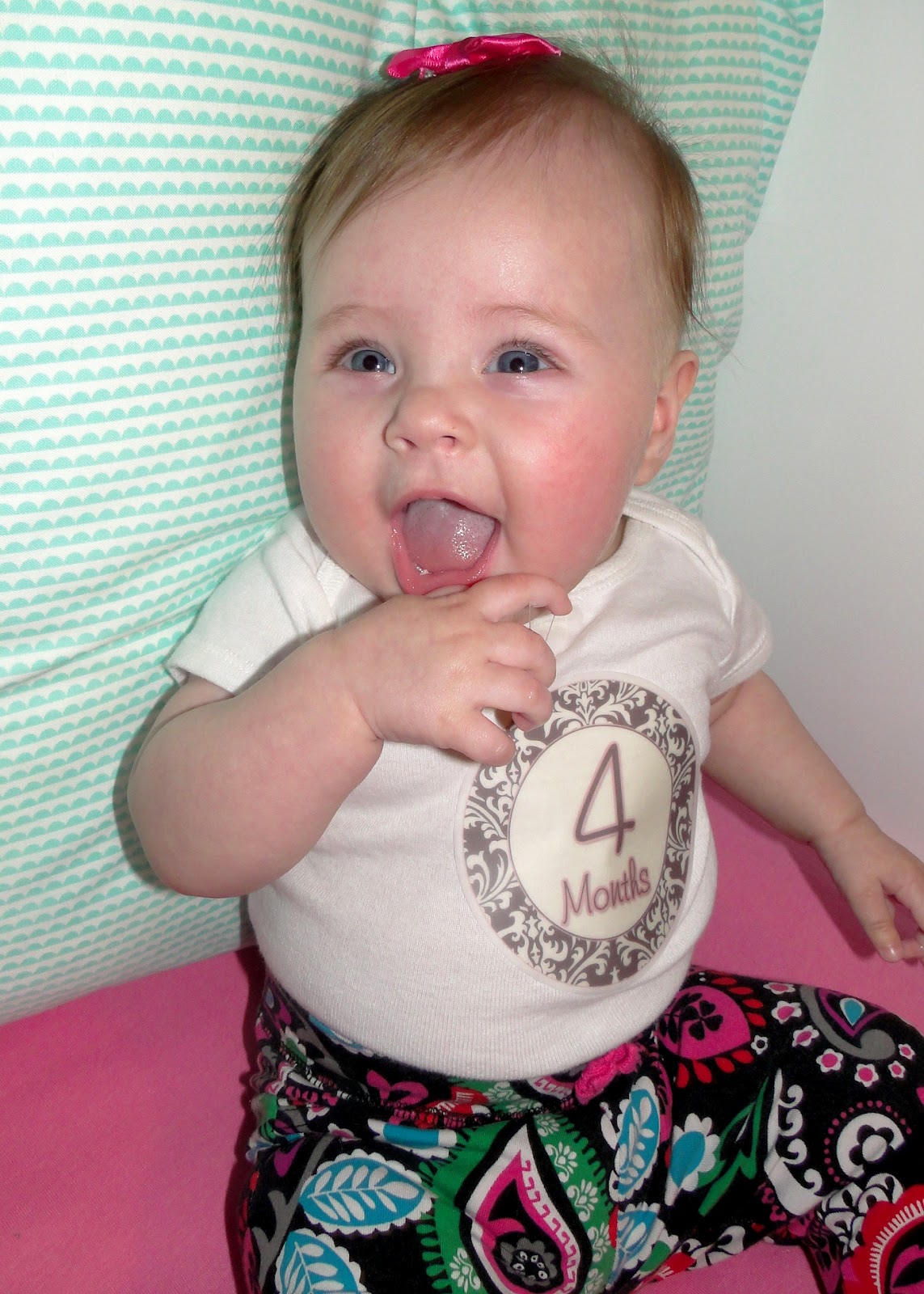 Brittlynn can do most of the things a four month old baby may possibly be able to do including: 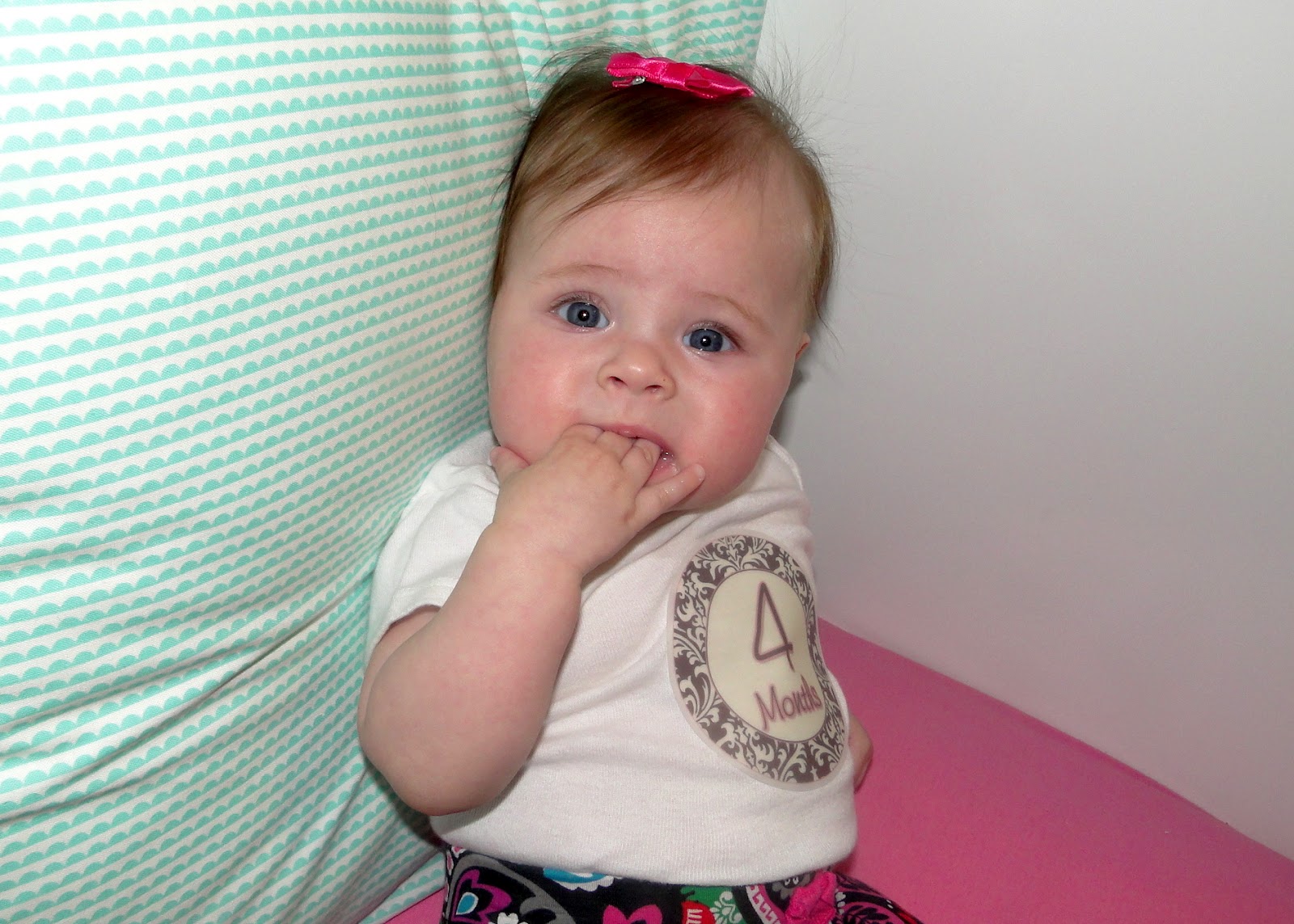 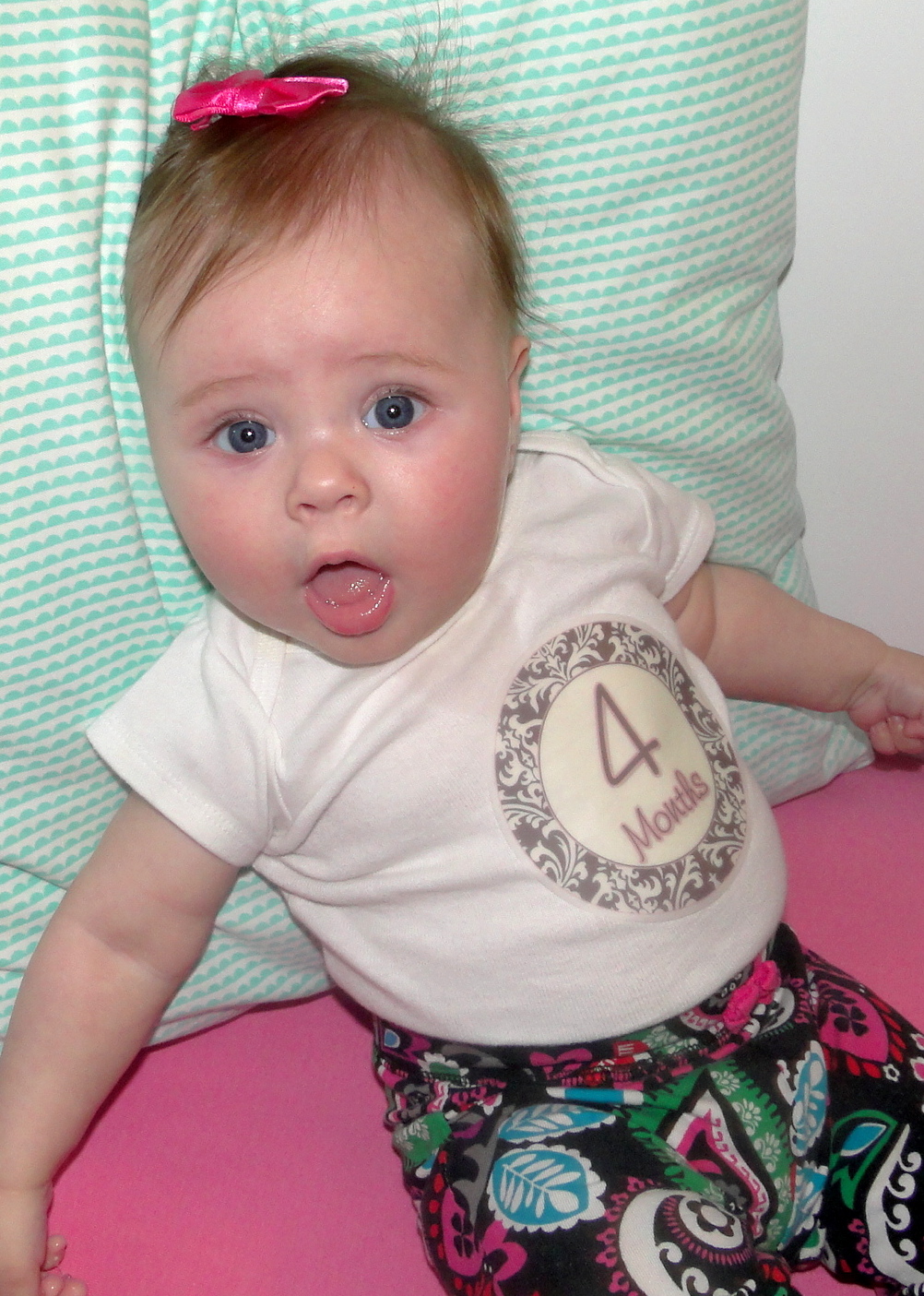 She can also do some of the things a baby her age may be able to do including: 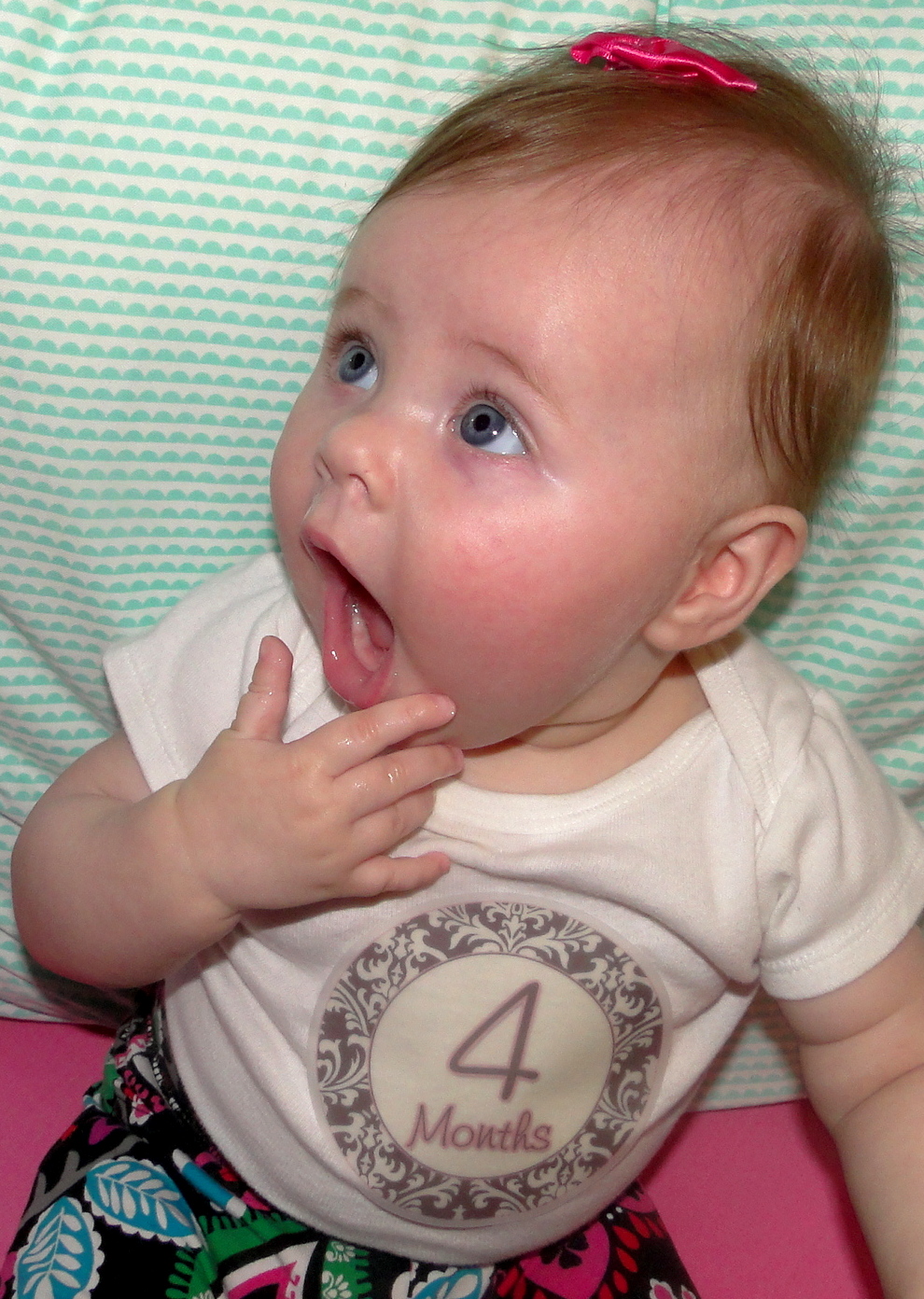 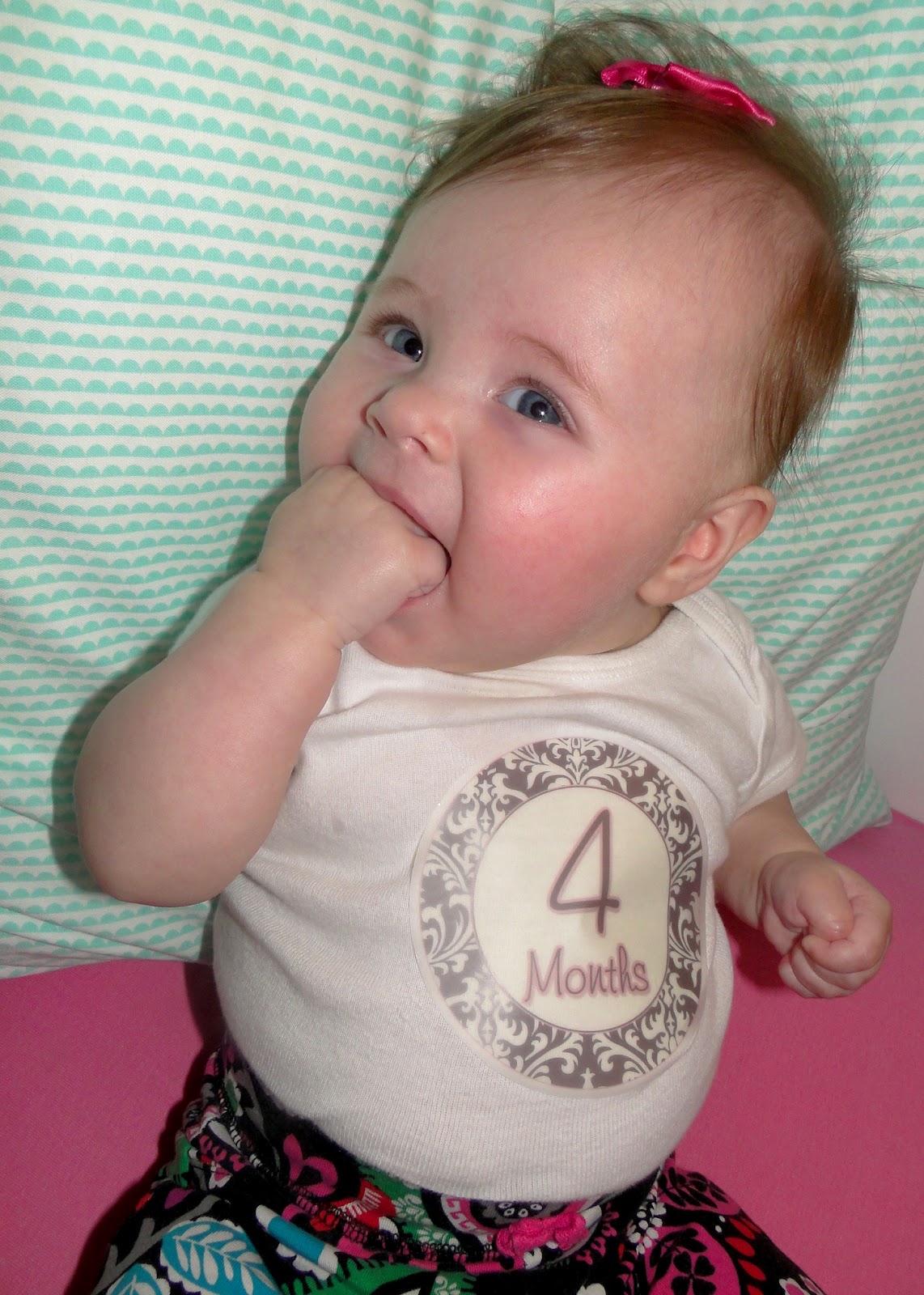 The only things Britt can’t yet do are: 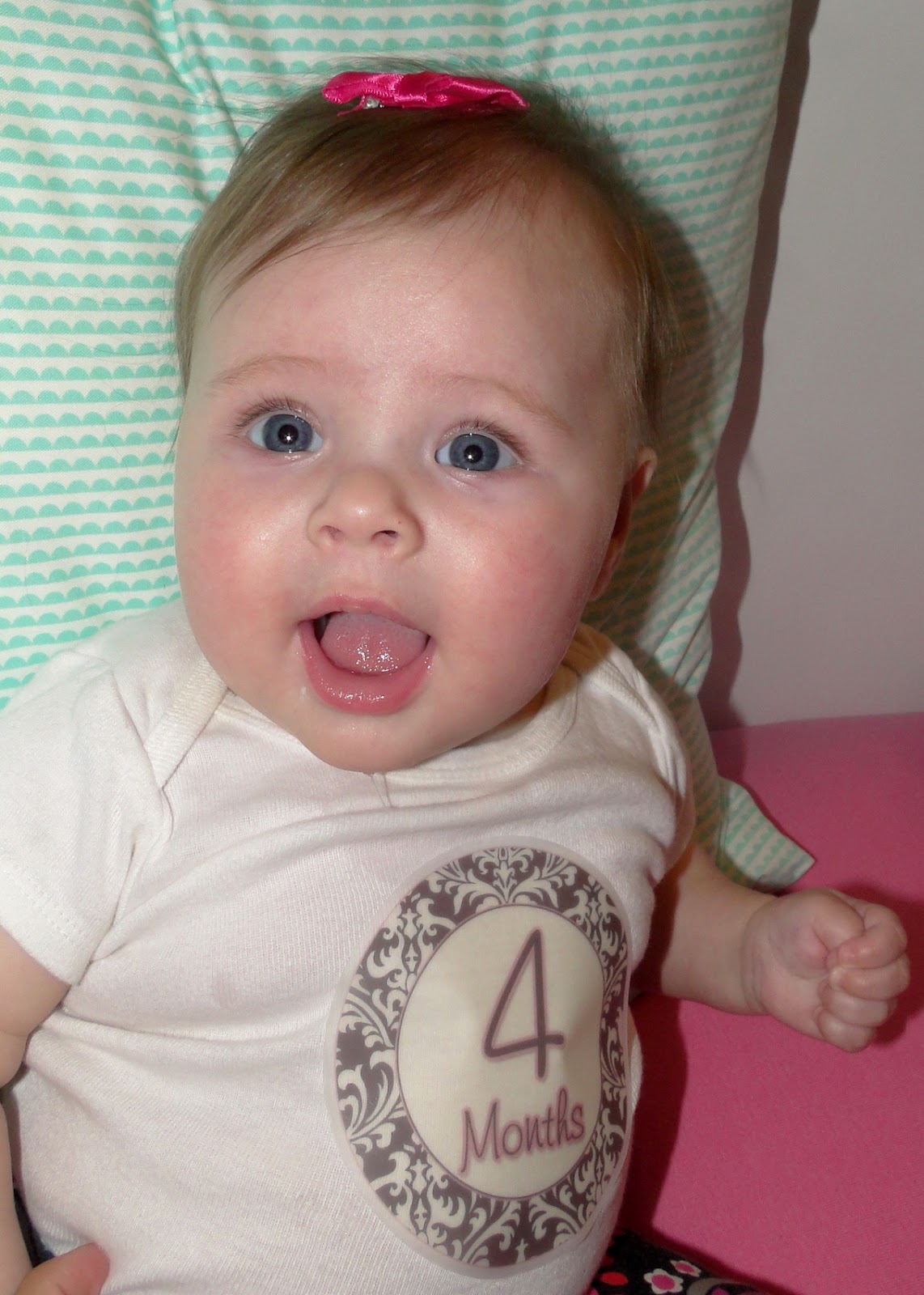 This chapter has a pretty big focus on introducing solids. I will NOT be introducing Brittlynn to solids until she is 6 months old. Babies do not need solid food until they are close to one year old!!!! I wish the “media” would quit making us moms feel rushed to give our children solid food. Breastmilk (or formula) is ALL THEY NEED!!!! Ugh. Don’t even get me started. …Obviously I did NOT read this portion of this chapter. And I’ll save my baby food rant…for now 😉 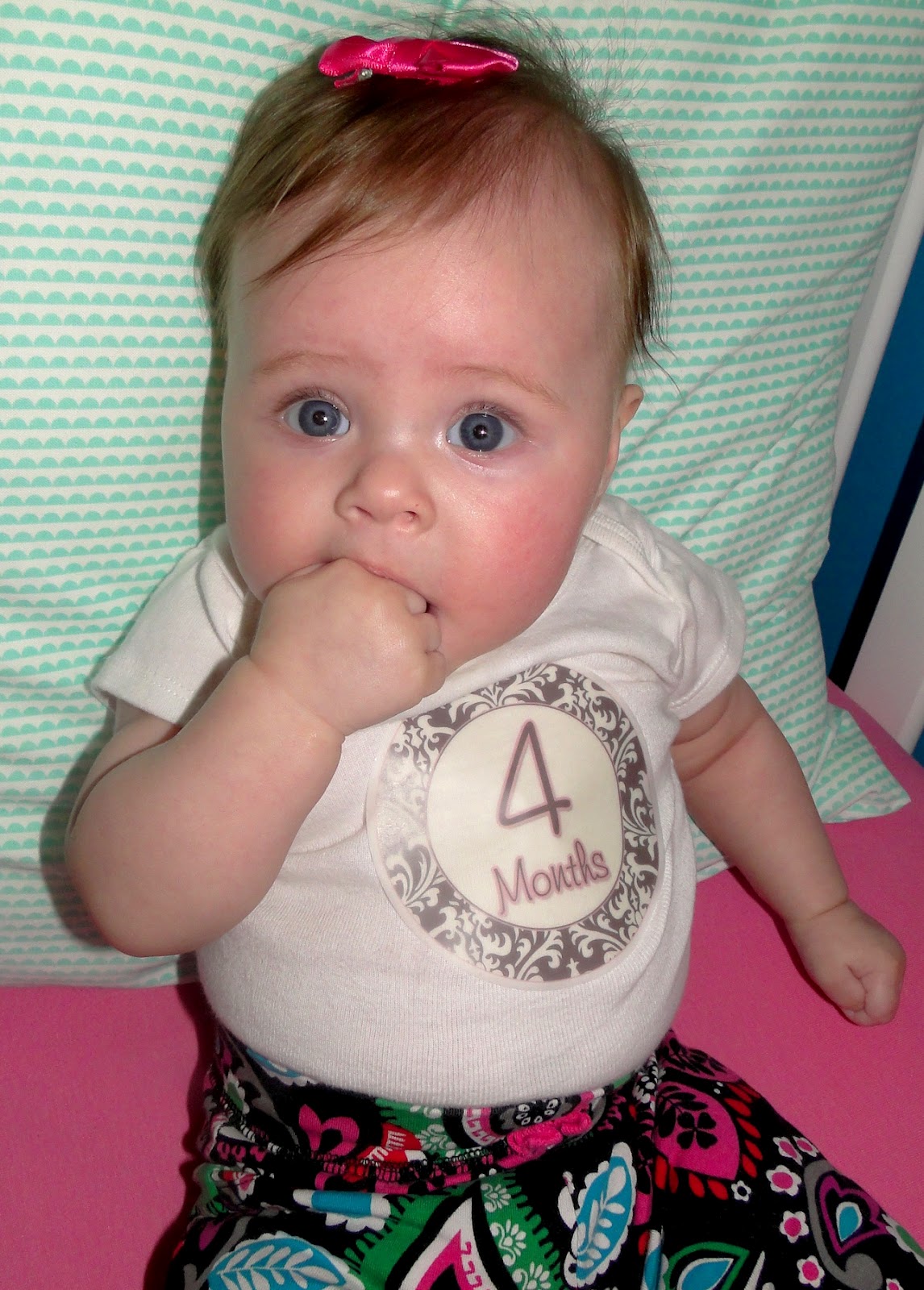 I did appreciate the tips on babies who don’t like the car seat. I’m already doing them all (toys for her to play with, singing to her, making sure she’s comfortable, having Kye talk to her in the back seat, etc). But it’s encouraging to know that it’s common for babies to hate the car and that she’ll eventually get over it 😉

It also made me feel better to read about finger sucking. Kye was a paci baby and Brittlynn isn’t. She likes those fingers!!! It says at this age MOST babies chew/suck on their fingers and not to worry about it too much. Even if she does become a constant “finger sucker” it doesn’t cause teeth damage as long as the habit stops prior to age 5. In fact 80% give it up on their own by age 5 and 95% give it up by age 6. She tends to put her entire fist in her mouth or sometimes just a couple of fingers. It’s not consistent and it’s not constant so I’m trying not to freak over it.. At least not yet! 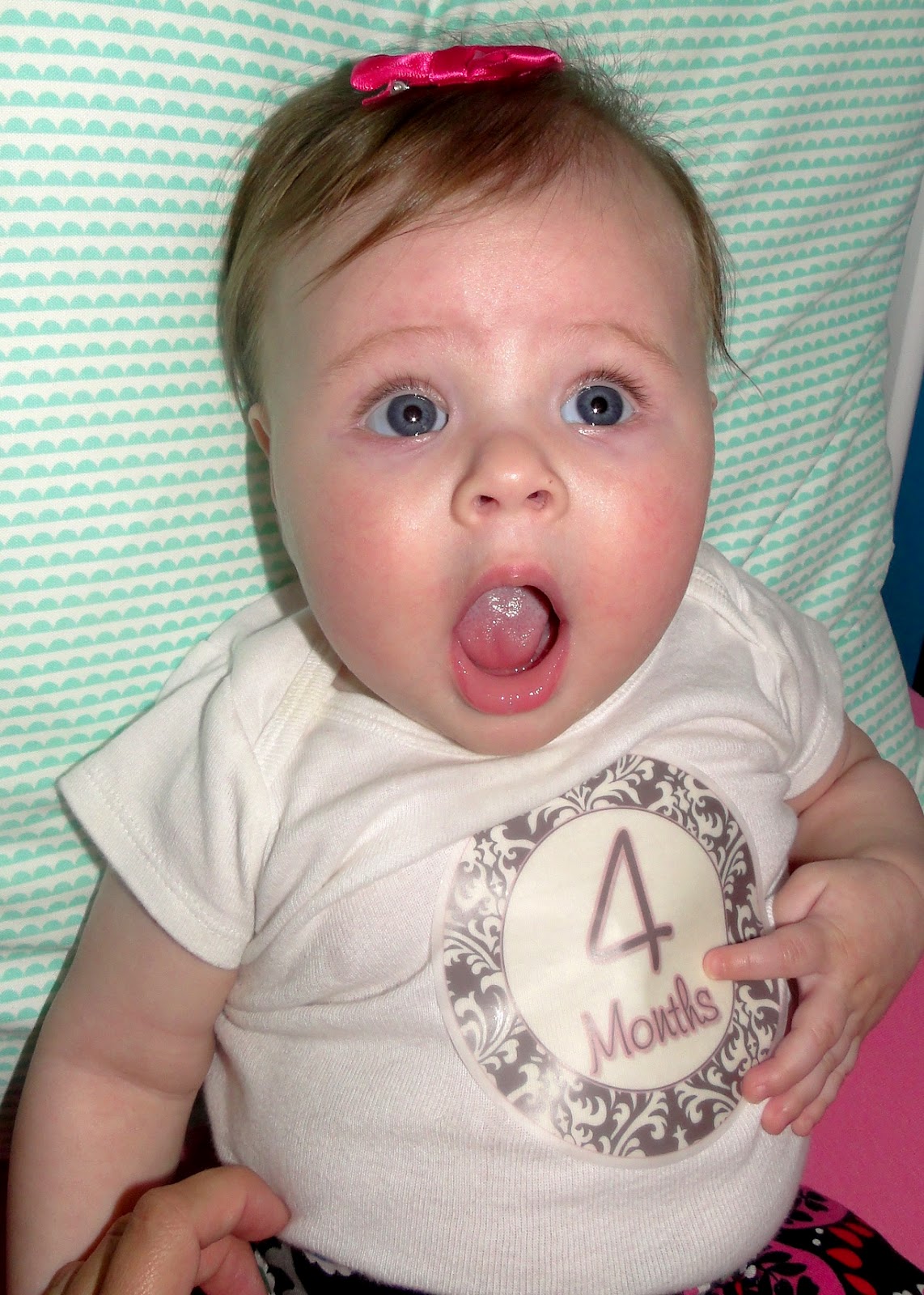 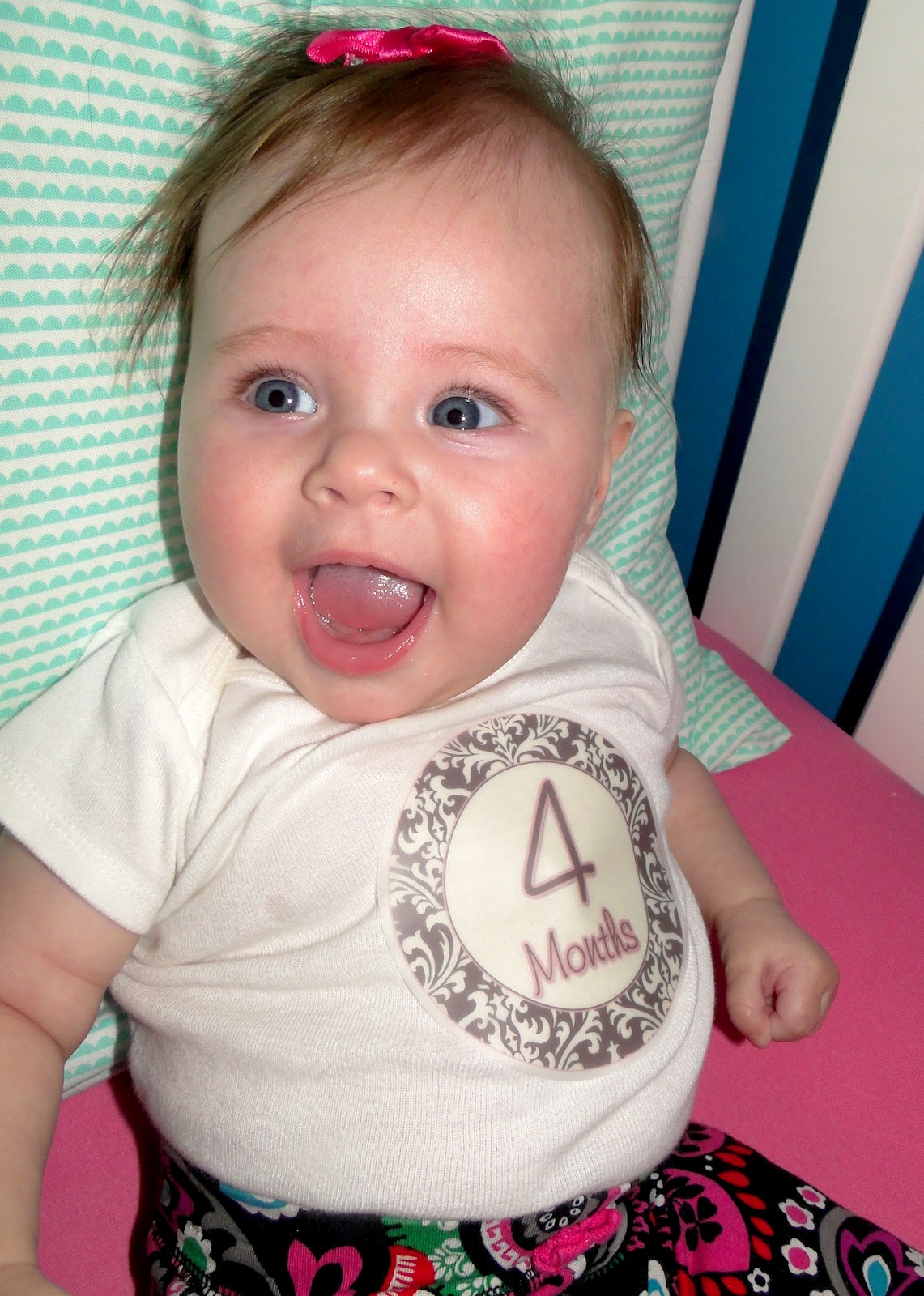 There was a little section talking about how baby’s grow and I found one point very interesting. We talk about the kids’ future heights decently often. Only because they have a MEGA tall dad (Zach is 6’6″) and a shorty for a mom (I’m 5’2″). Will we have short boys and tall girls?!?! This says that the programming for height is based primarily on the mid-point between the father’s and mother’s height. Studies show that, in general, boys seem to grow up to be somewhat taller than this midpoint and girls end up being somewhat shorter. Our midpoint would be 5’10” Therefore it’s safe to assume that Kye will probably be a little taller than this (maybe 6′ YAY!!!!) and Britt will be a little shorter (so like 5’8″?!?! GAH I’m gonna be a midget compared to my family!!!).

The rest of this chapter focused on toys and how to choose appropriate ones for your child’s age. I’m pretty hardcore about safety and would never allow Britt to play with something that could be a choking hazard. That being said, it is harder to be on top of the toy thing when you have two kids. I didn’t keep all the packaging of Kye’s baby’s toys so I’m not really sure if they were suitable for ages 3 months and up or 6 months or 12 months or what. I keep it pretty simple and just follow Britt’s lead. You can tell a LOT by what your children do with the toy. Right now she’s into chewing on stuff so I stick with things that she can safely chew on and hold on her own. Pretty basic! 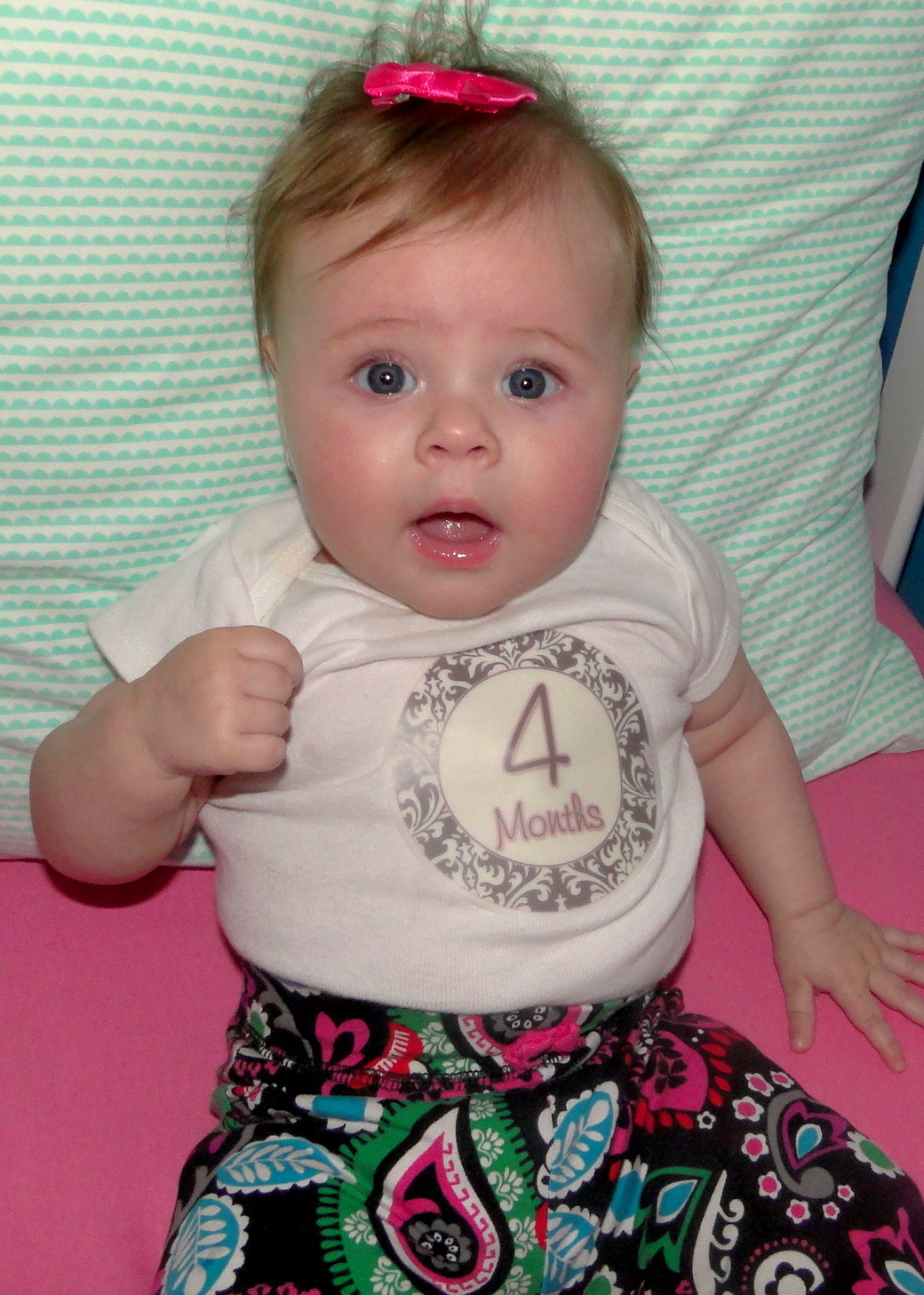 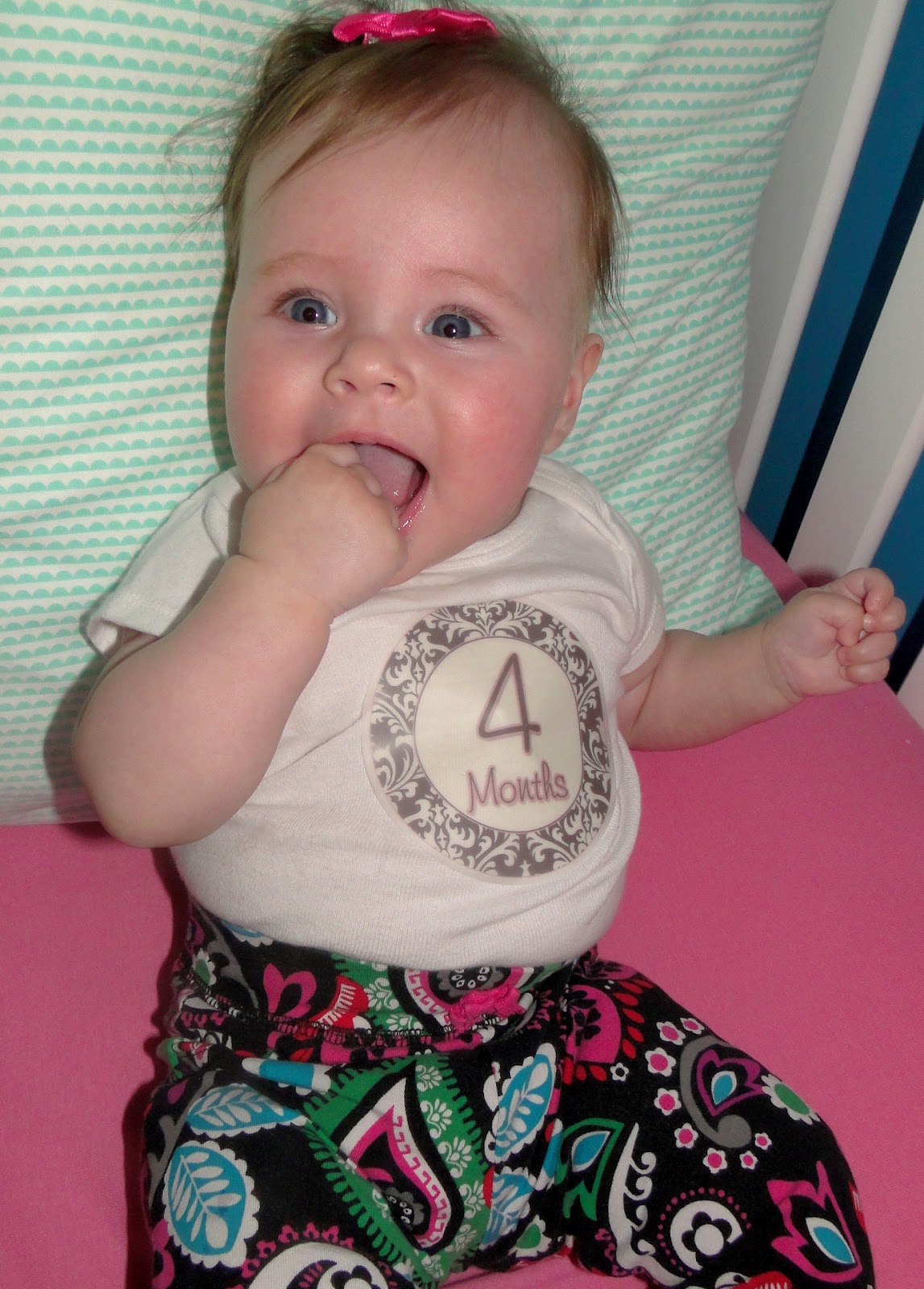 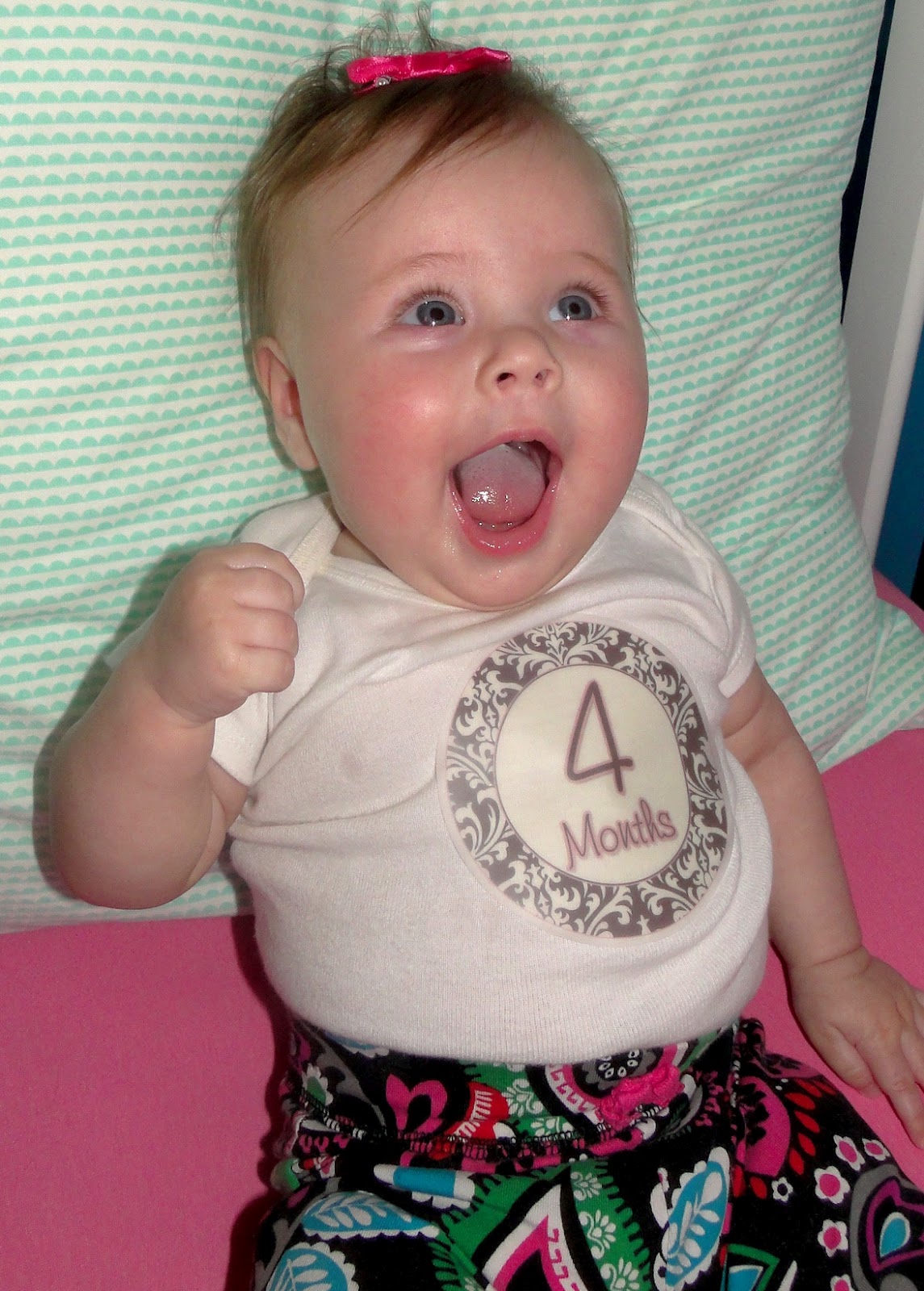 You can look back at Kye’s 4 month post here.