Just like I did with Kye, I plan to post a monthly blog entry for Brittlynn and track her development using What to Expect the First Year. I am TERRIBLE at knowing developmental milestone stuff. Like seriously, I have no clue what kids should be doing when so this will help me see how she’s doing and what I need to be working on with her. I planned to order monthly stickers for her from the same site I had my belly ones from during pregnancy but that seller when on a break because she had a baby too! So I bought these stickers from a new Etsy seller and you can purchase some of your own here!

I didn’t do a monthly sticker thing for Kye (did they have them back then?) but I like the idea that every month will be similar pictures. I’m not sure on a location for them all yet, I may change it up each month. We got her an ADORABLE chair for her room but it hadn’t arrived in time for the one month ones so I may use that in the future, we’ll see 😉 The day she turned one month old (Jan 6th) I took about 10 minutes and snapped these pictures to go along with this blog entry! Enjoy!

This makes me laugh! 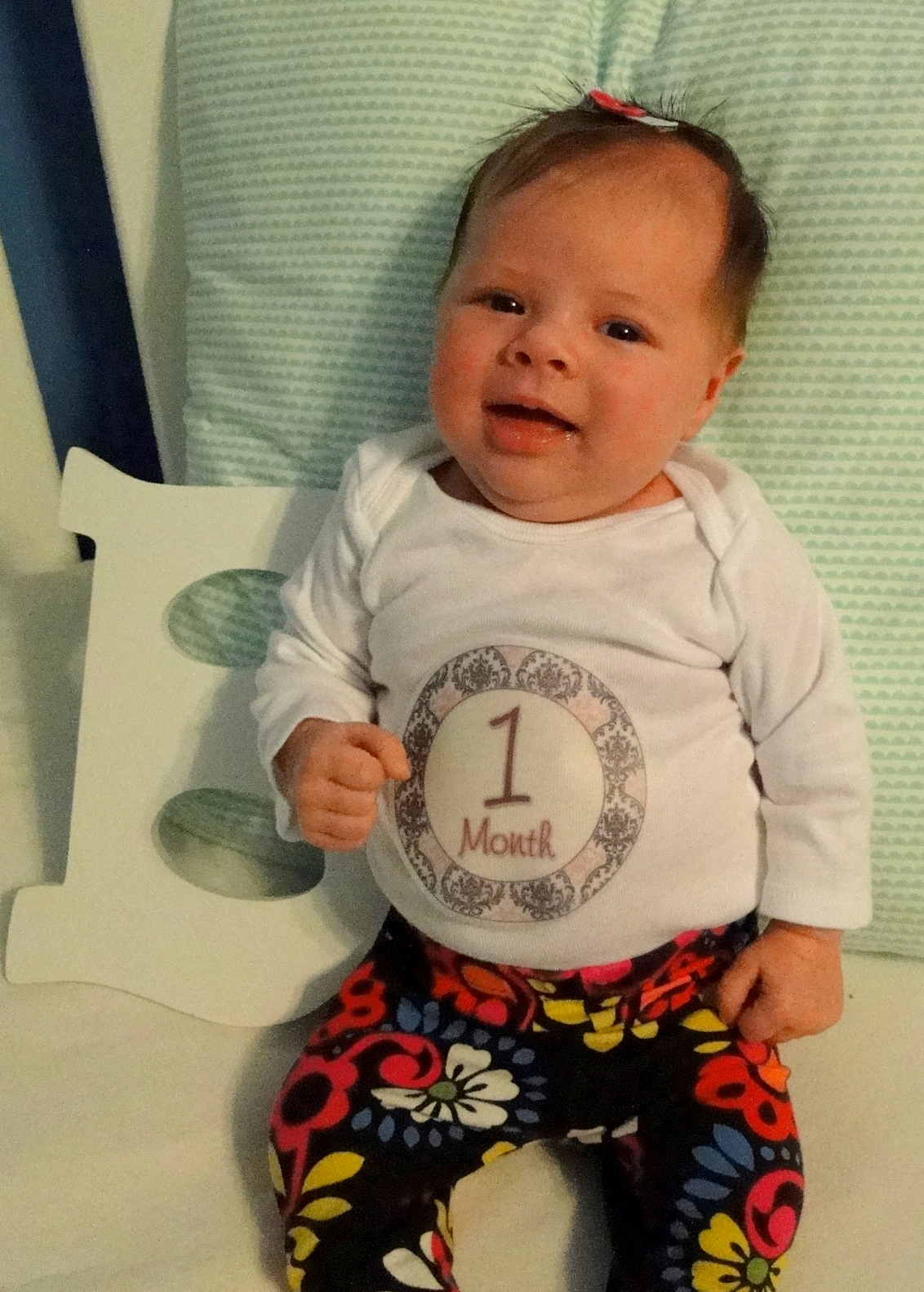 At one month old Brittlynn is doing everything a baby her age should be able to do including: 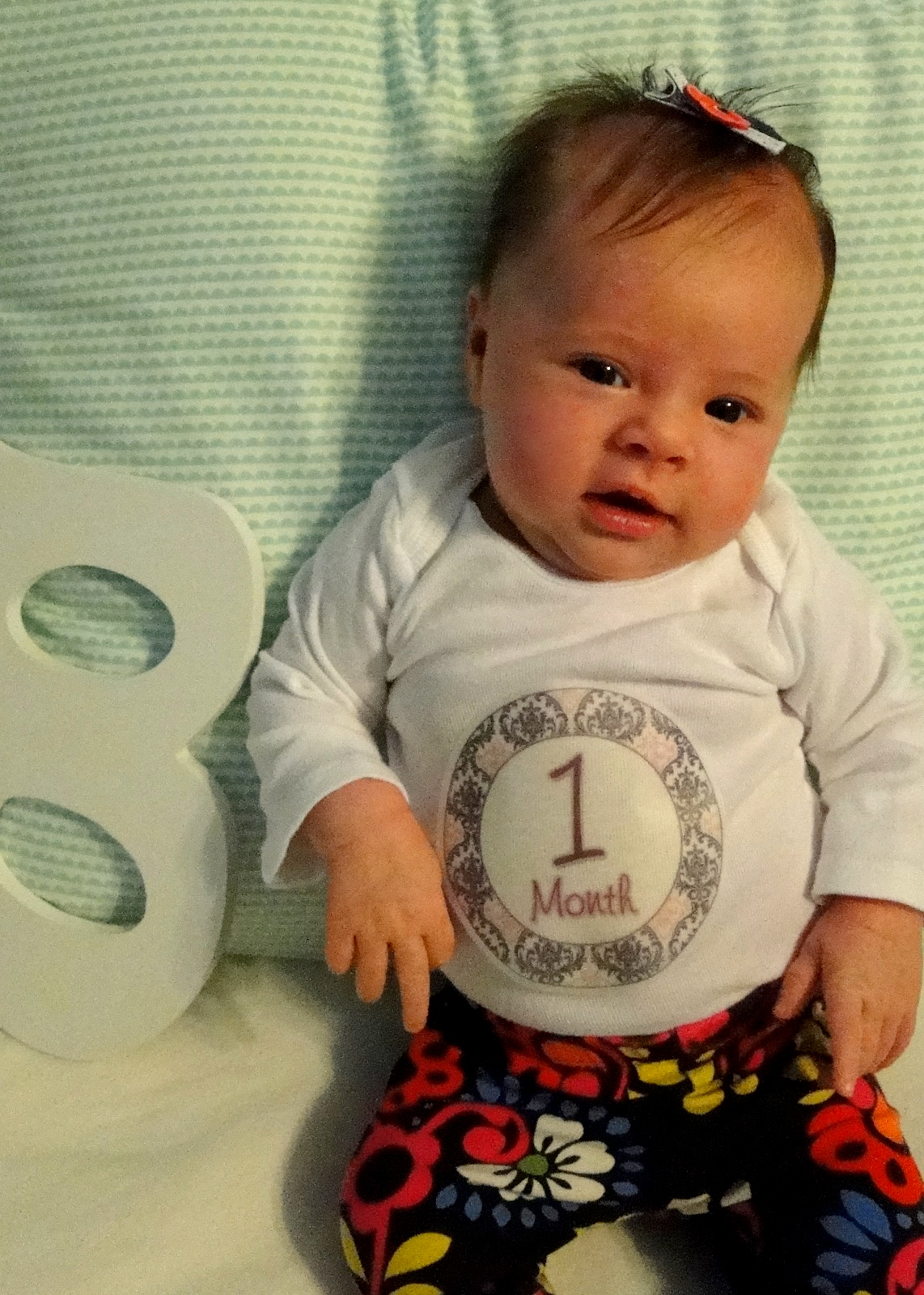 She can do everything a one month old will probably be able to do including:

a little smile for you! 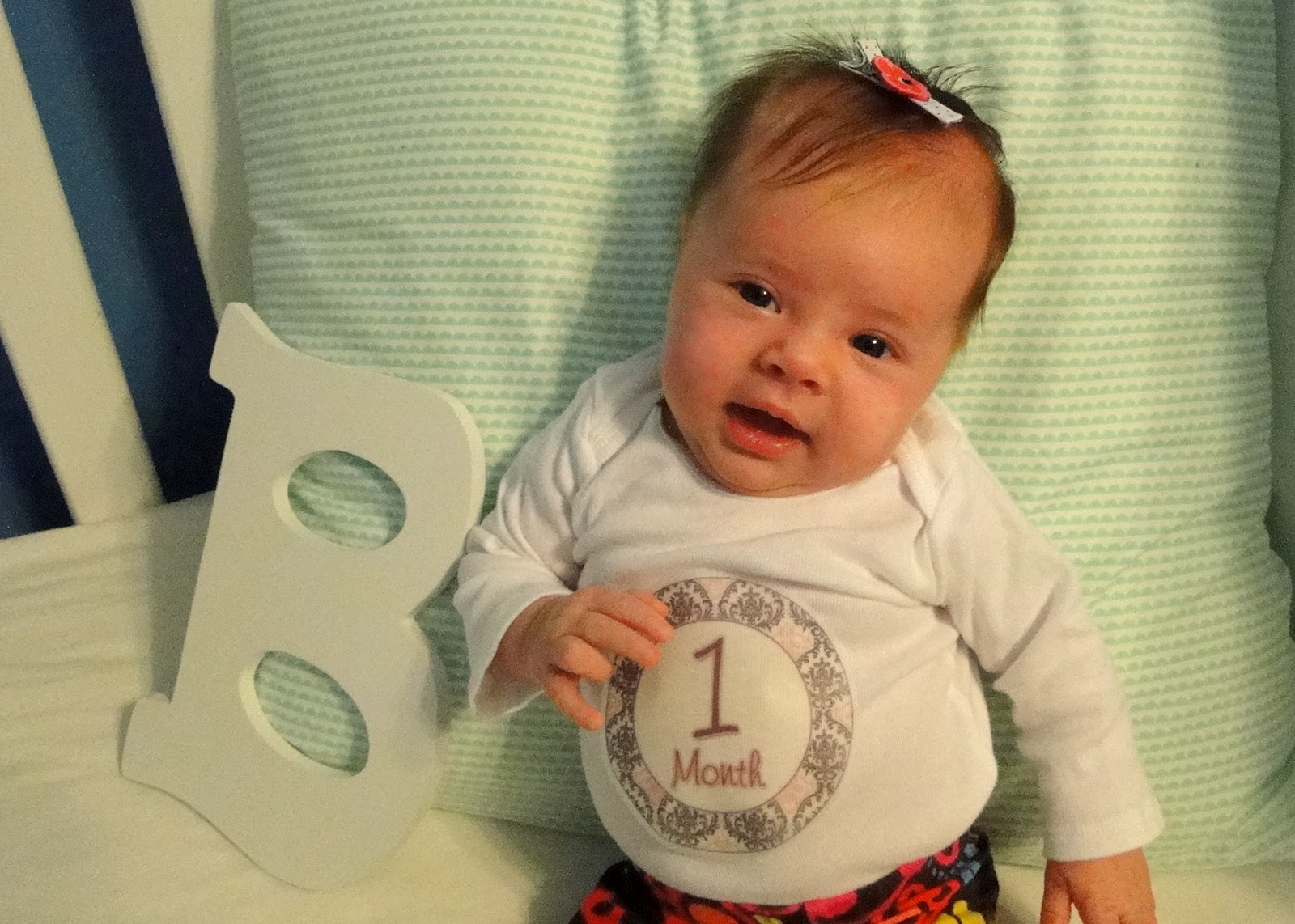 She can do everything a baby her age may possibly be able to do including: 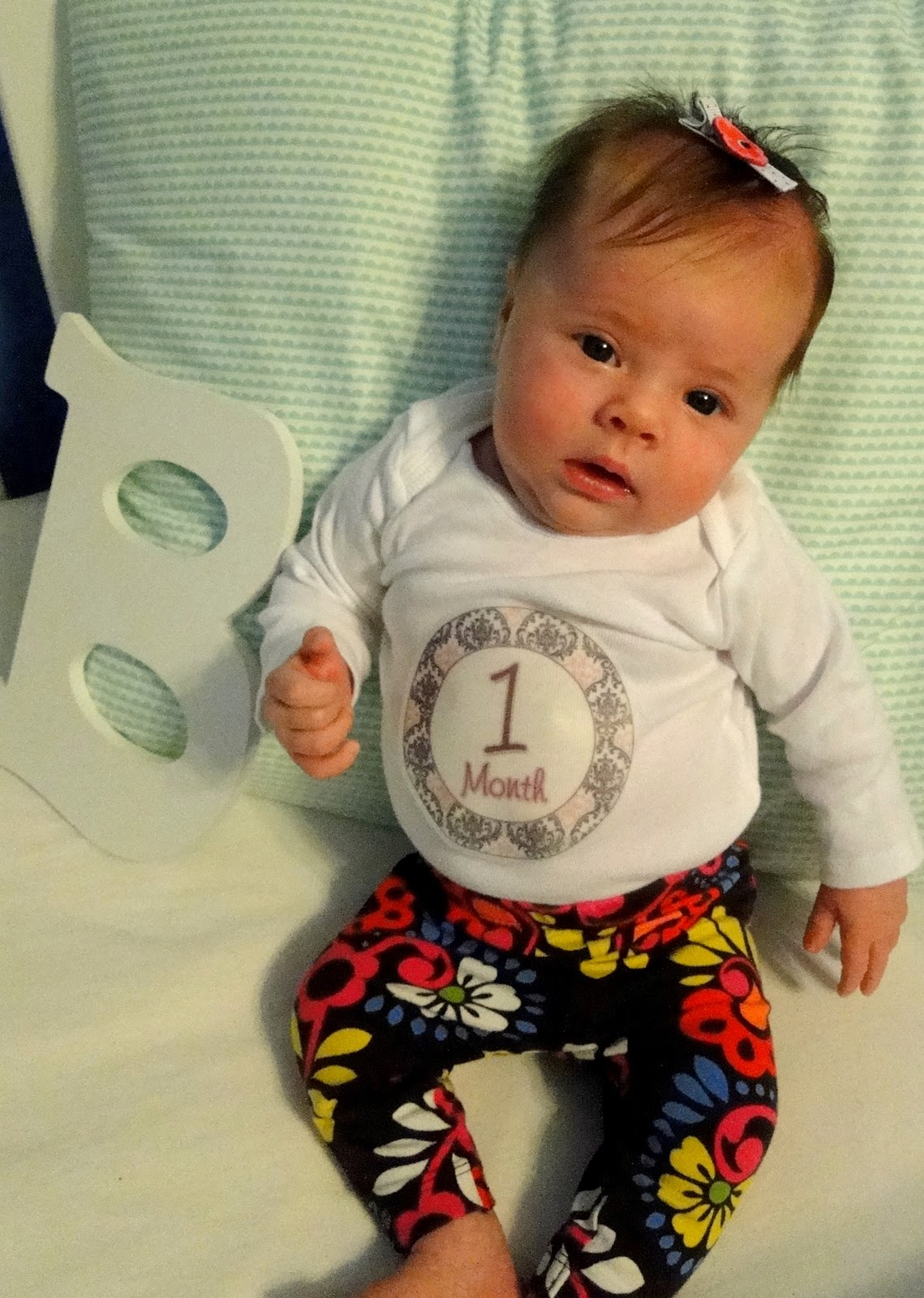 She can do most of the things a one month old may be able to do including:

such a goober face 😉 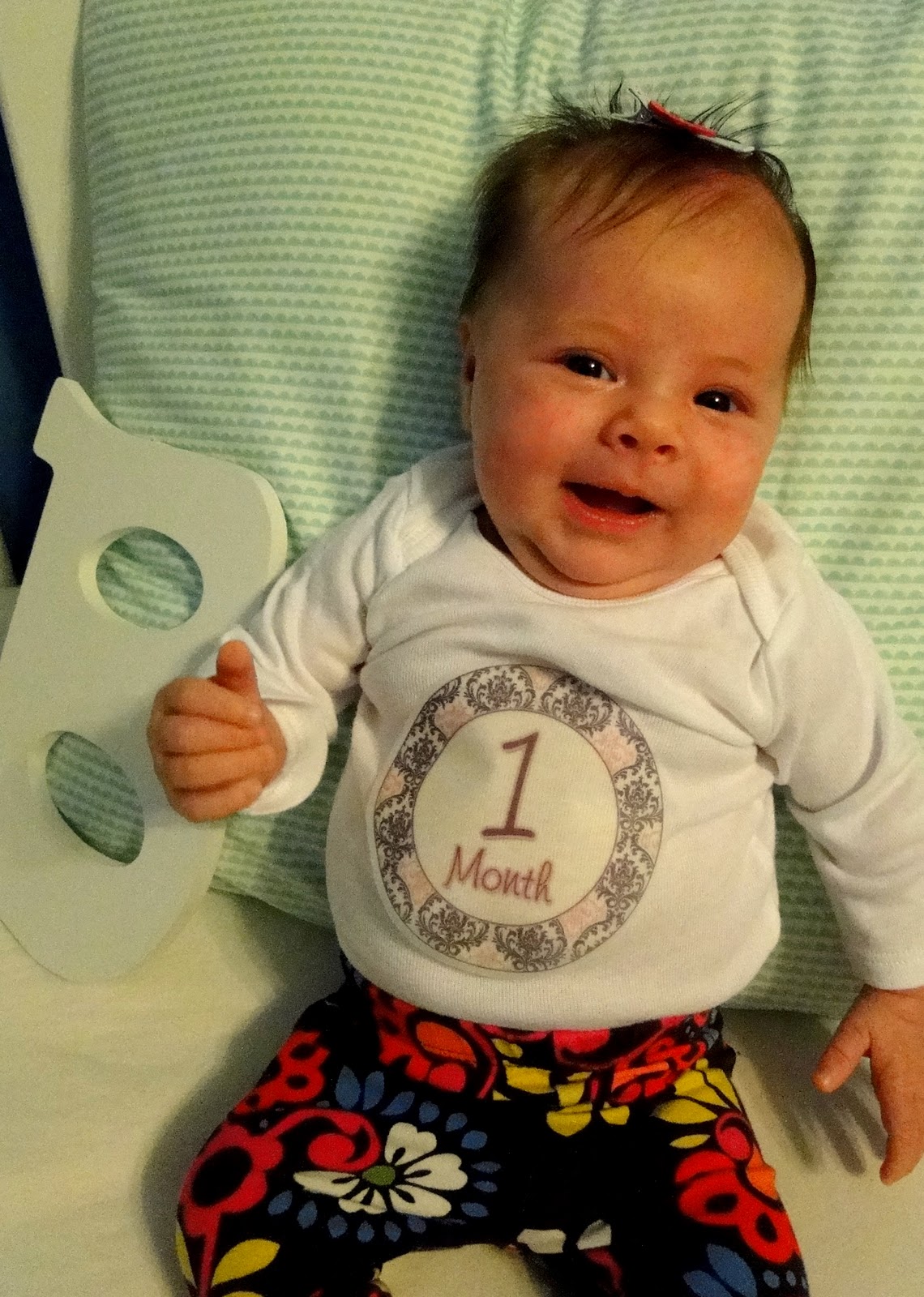 The only thing she can’t do yet is from the “may be able to” category and it’s: 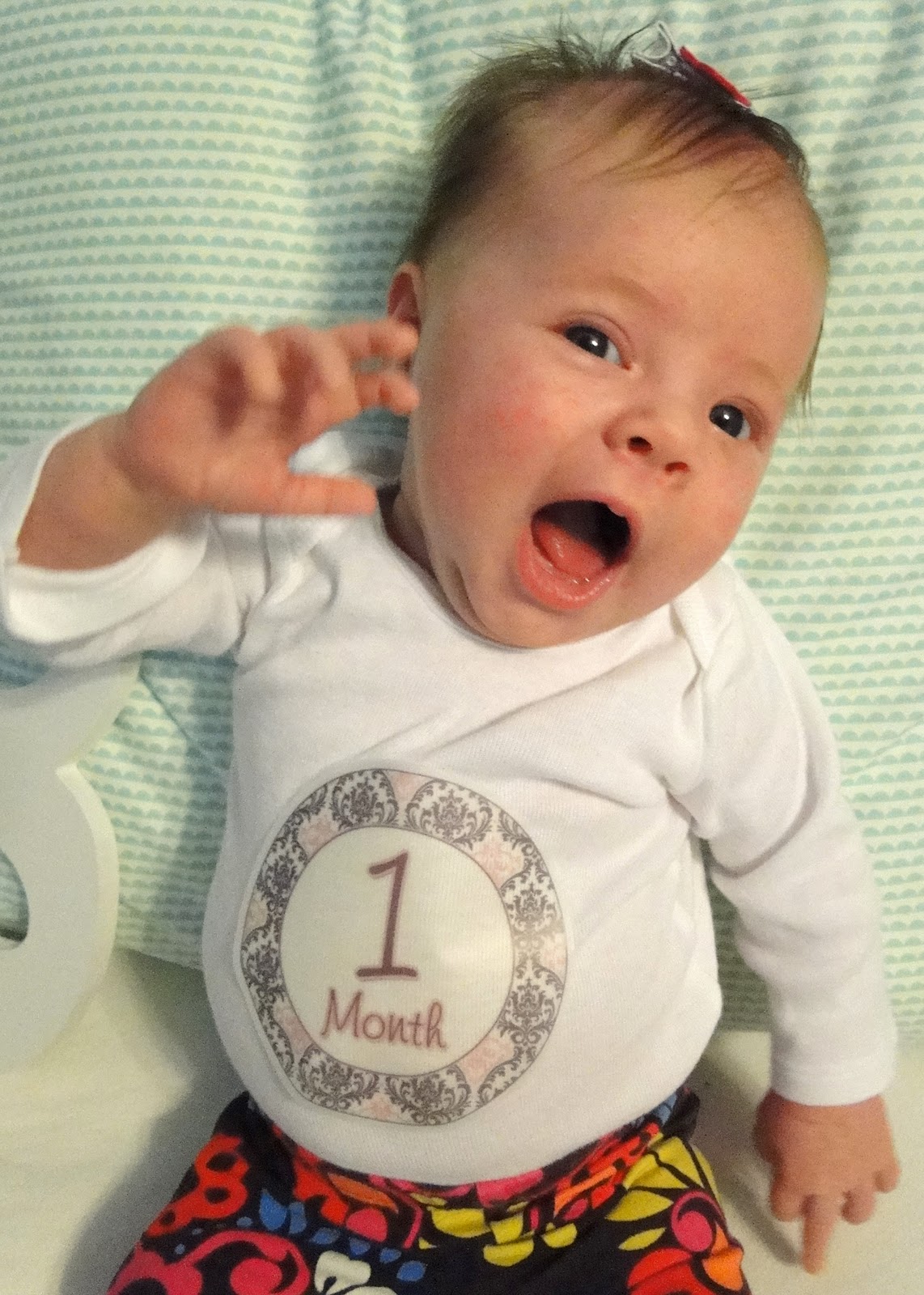 I enjoy reading the monthly chapters in the What to Expect the First Year book as they help answer any questions I may have and understand some things better about the stage my baby is in. This month mostly covered breastfeeding…which I feel I have down pat! It did cover some things I found interesting though too!

It mentioned the blister thing on her upper lip and it’s known as “nursing blisters.” It’s from vigorous sucking (which she does do!!!). It will go away on it’s own and doesn’t cause her any discomfort. 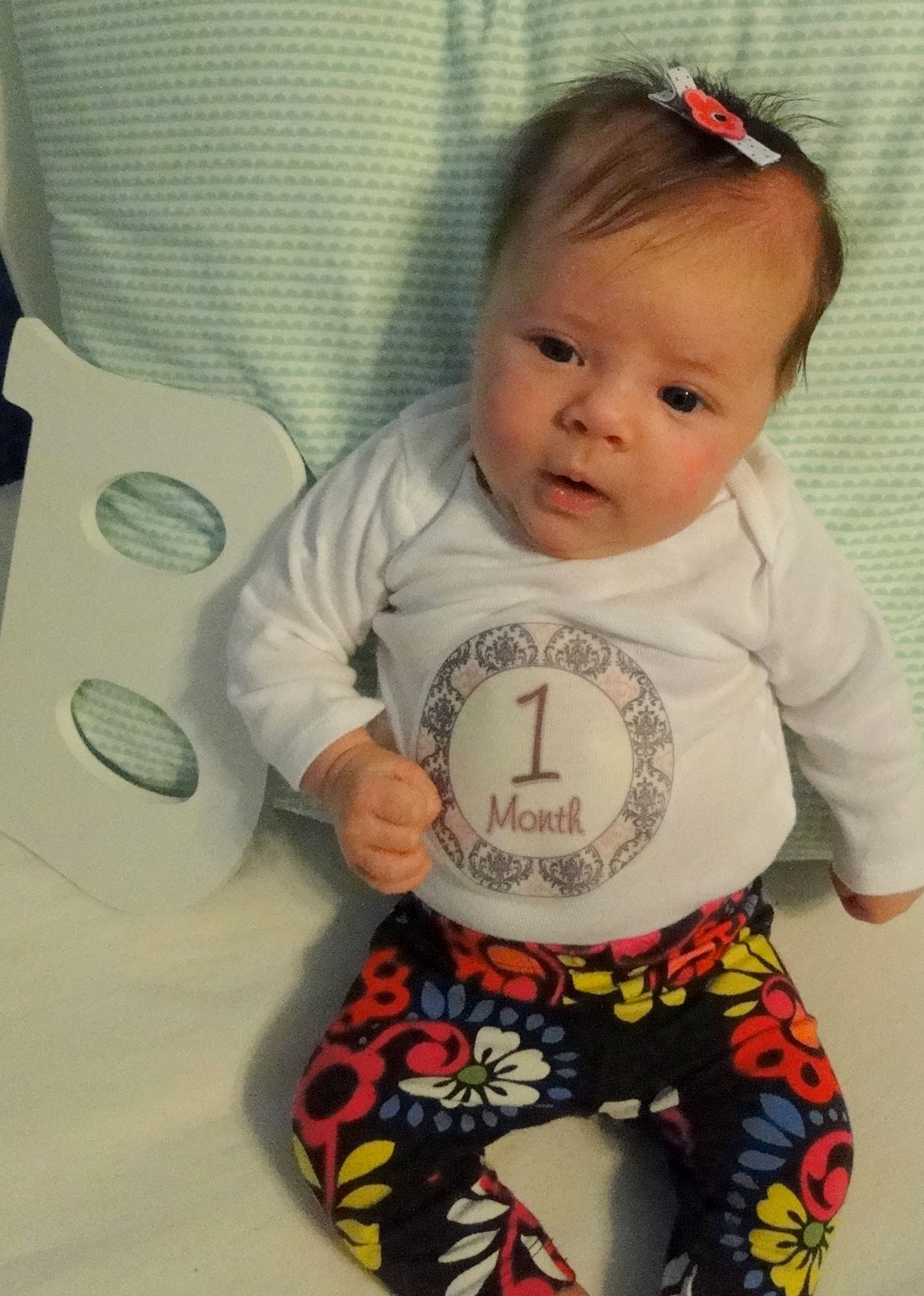 I found the section on spitting up very insightful. Both of my kids were/are BIG pukers. Kye spit up so much that I invested in bibs to match all of his clothing. Brittlynn is following in his footsteps and spits up after every feeding. Like more than once. I have been debating the past couple days about calling her pediatrician about it…but I KNOW they will say she has GERD (reflux) because they said the same thing about Kye. I KNOW that reflux issues are very common, however, I also think it’s over-diagnosed. I don’t want my child on medication that she doesn’t really need. She never arches her back or cries any kind of painful cry so I was hesitate to call the doctor.

This book says that most babies spit up. It’s extremely common and, although it’s messy and smelly, it’s not usually a cause for concern. It’s typically a laundry problem, not a health problem. It may be related to an immature sphincter between the esophagus and the stomach  and to excess mucus that needs to be cleared. It also may be coming up with a burp and sometimes a baby wisely spits up because she’s eaten too much. If the spit up looks unchanged from when she drank the milk then it only went as far as the esophagus before coming back up. If it traveled own to the stomach before its return trip, it will look curdled and smell like sour milk. Hers is typically the curdled sour milk kind.

There is no cure for spitting up but some ways to help include:

Most likely she’ll continue to spit up until she is six months old. I feel confident, after reading this, that I do not need to call the doctor. She doesn’t have the signs of GERD: she is gaining weight fine, doesn’t have prolonged gagging or coughing, her vomit isn’t brown or green and she doesn’t shoot out the spit up two to three feet away. And she is a “happy spitter” meaning she doesn’t seem in any discomfort so most likely she doesn’t have anything medically wrong with her! Whew! 🙂 It also said using a diaper wipe will help eliminate the odor when she spits up 😉

When she makes this face I TOTALLY see Kye!!! 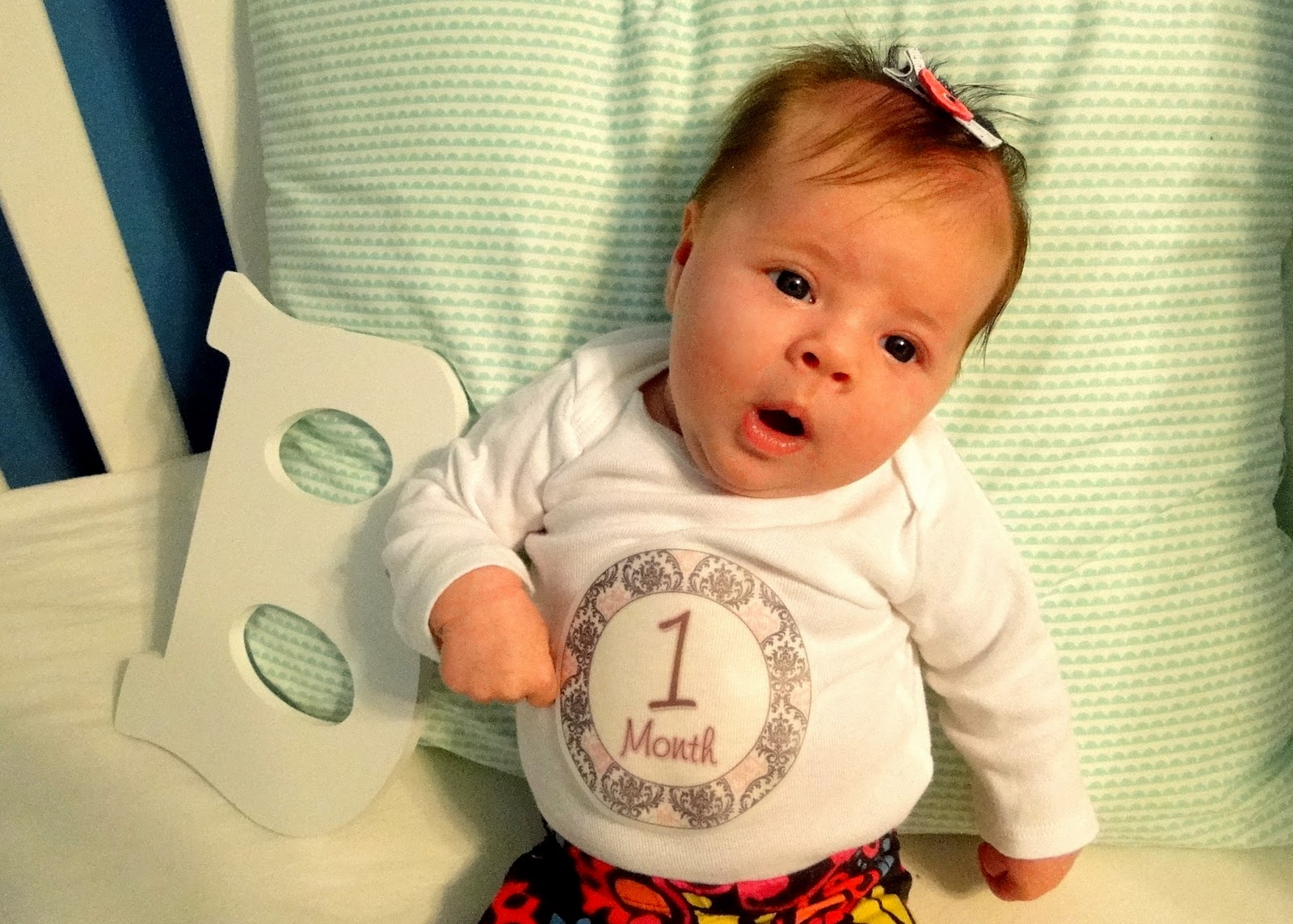 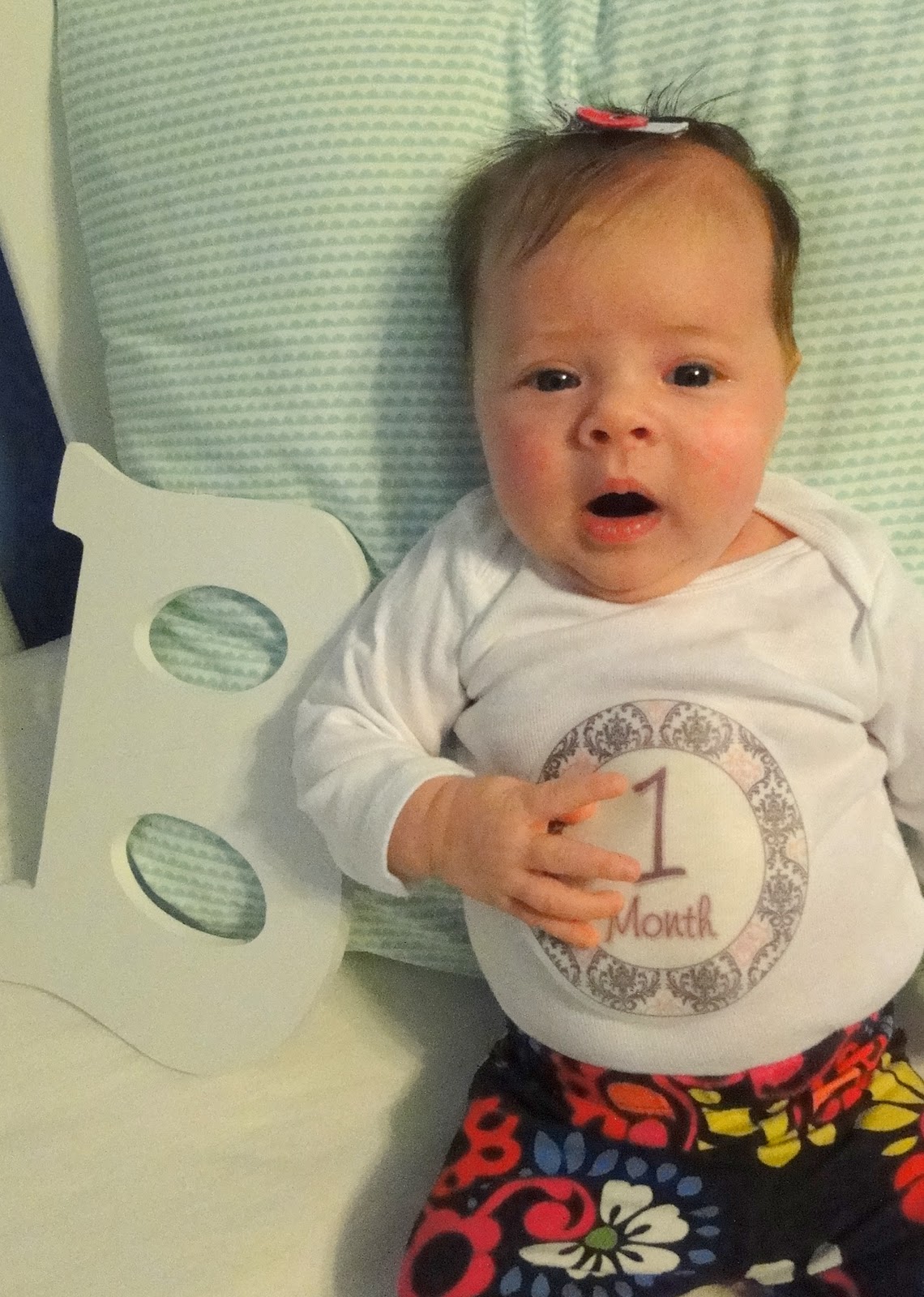 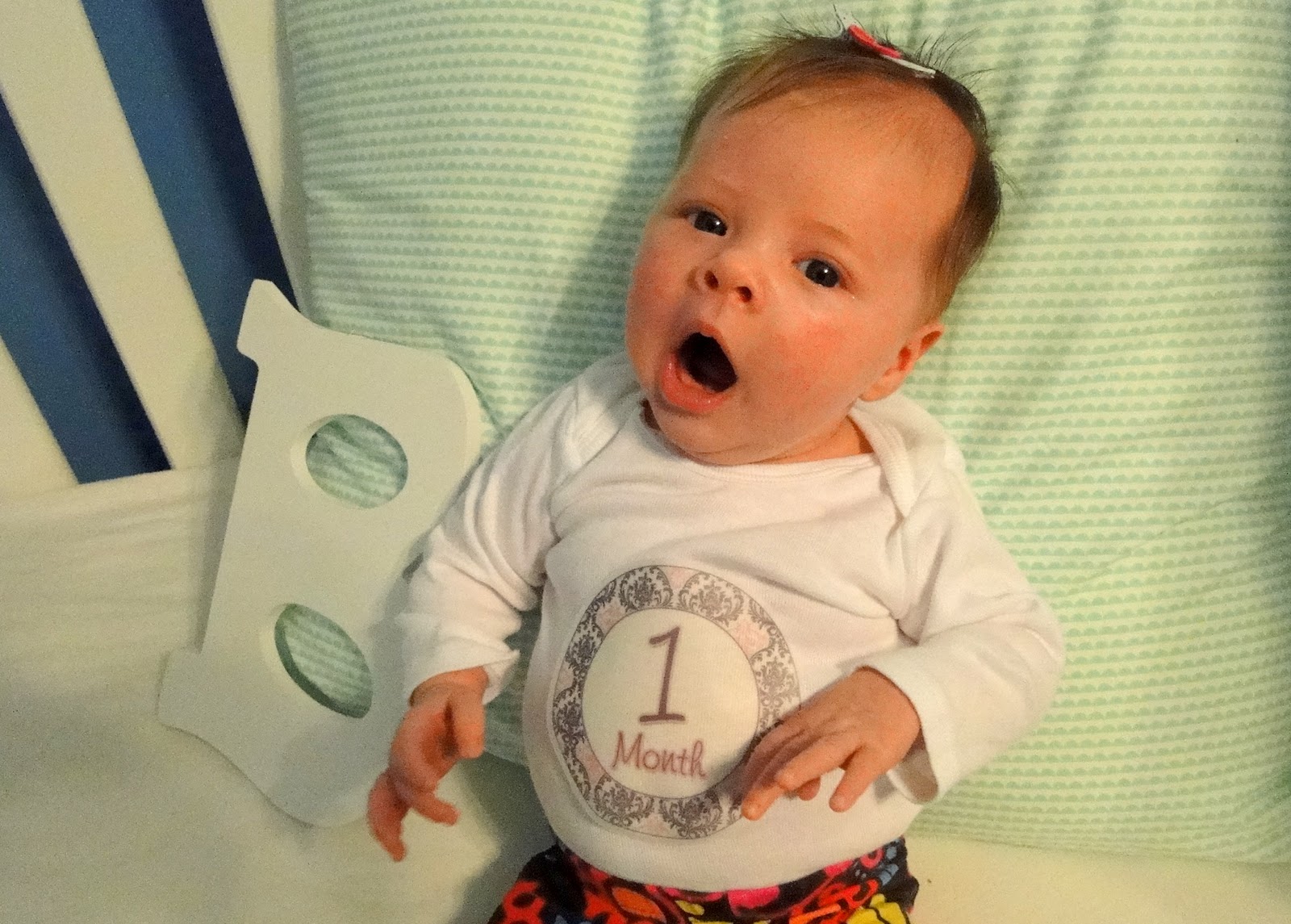 It has been a wonderful first month, if you’d like to see what Kye was up to during his first month you can see his post HERE.  It’s interesting that they both hit the same developmental milestones this month except the hands together thing!!! I don’t think they really look alike at this age…do you??? 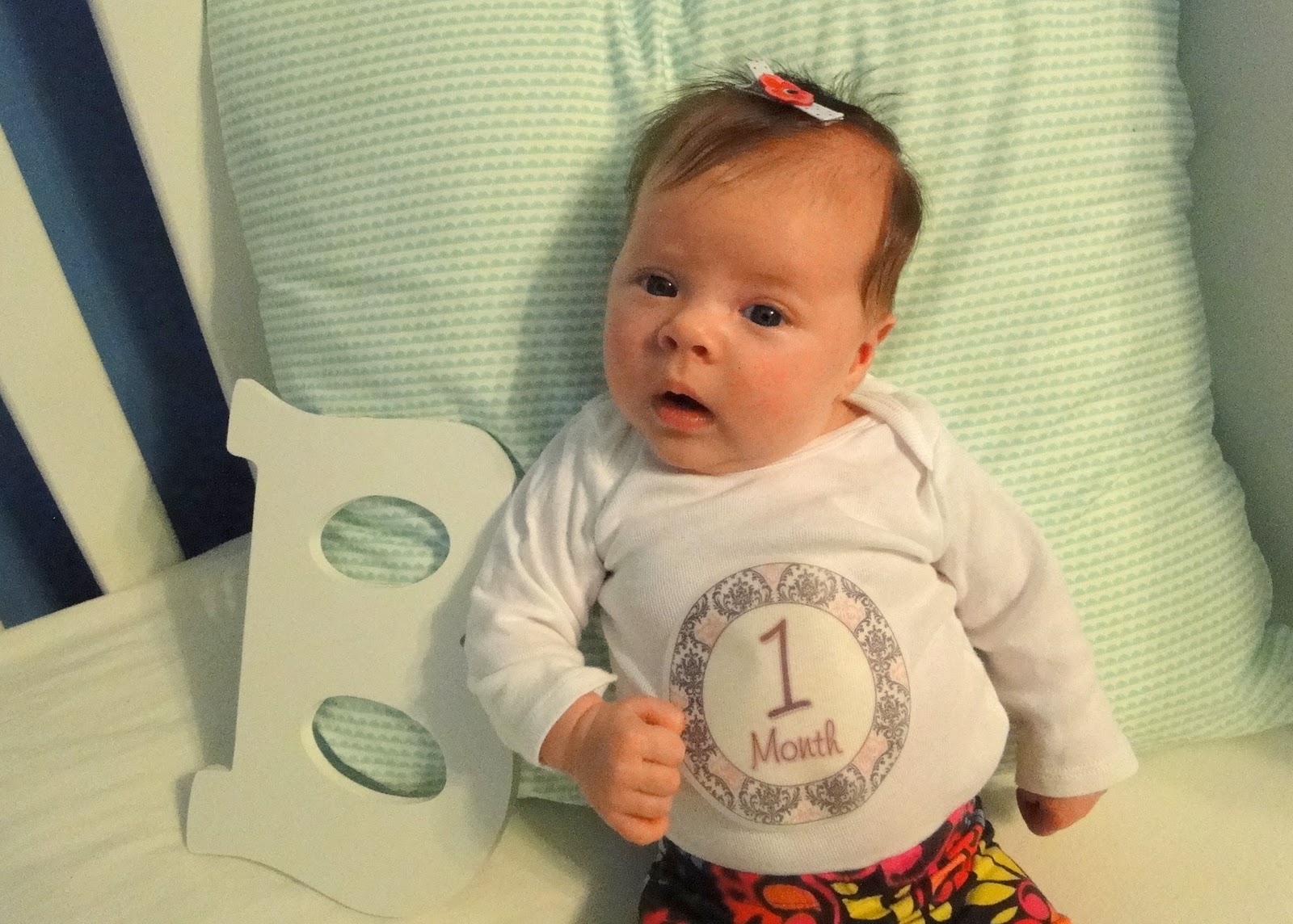 my favorite this month 🙂 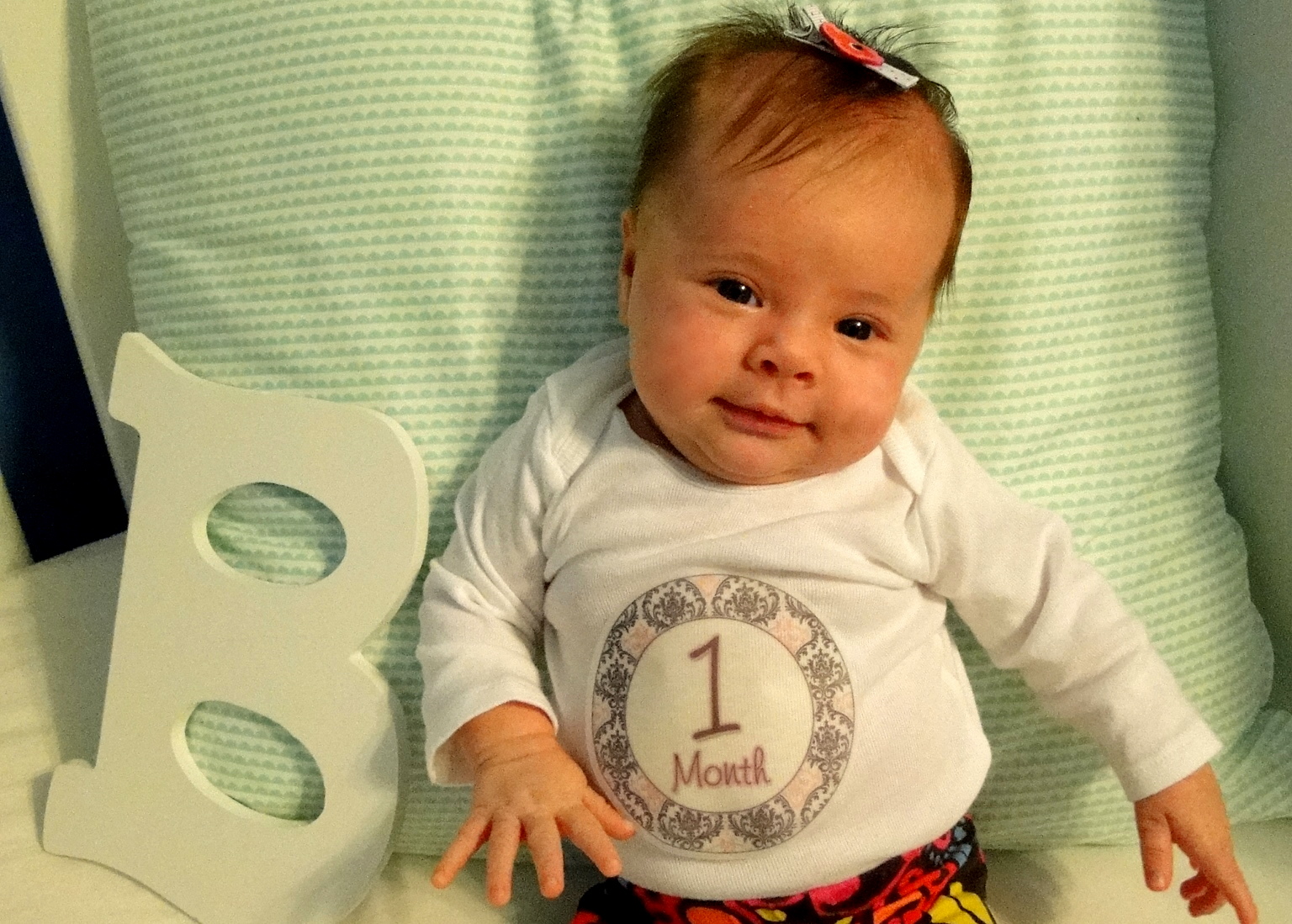