On July 19th we had Brittlynn’s 6 month pediatrician visit…yeah…she turned 6 months old on June 6th. We’re a little off schedule! Thankfully, her nine month appointment won’t require any shots so we can get back on track then 🙂

We all four went to the appointment as Zach needs to be there to handle the shot giving 😉 Kye was jacked about Brittlynn getting shots. He kept telling EVERYONE “Britt is getting shots. She has to have shots today.” Next time, I won’t be telling him that. I can just see them as older kids and him freaking her out about it haha.

We were one of the earliest appointments of the day! I had my times a little off and we were a bit earlier than we needed to be but it all worked out fine as we got back there quick…always a plus!

Waiting in the waiting room! 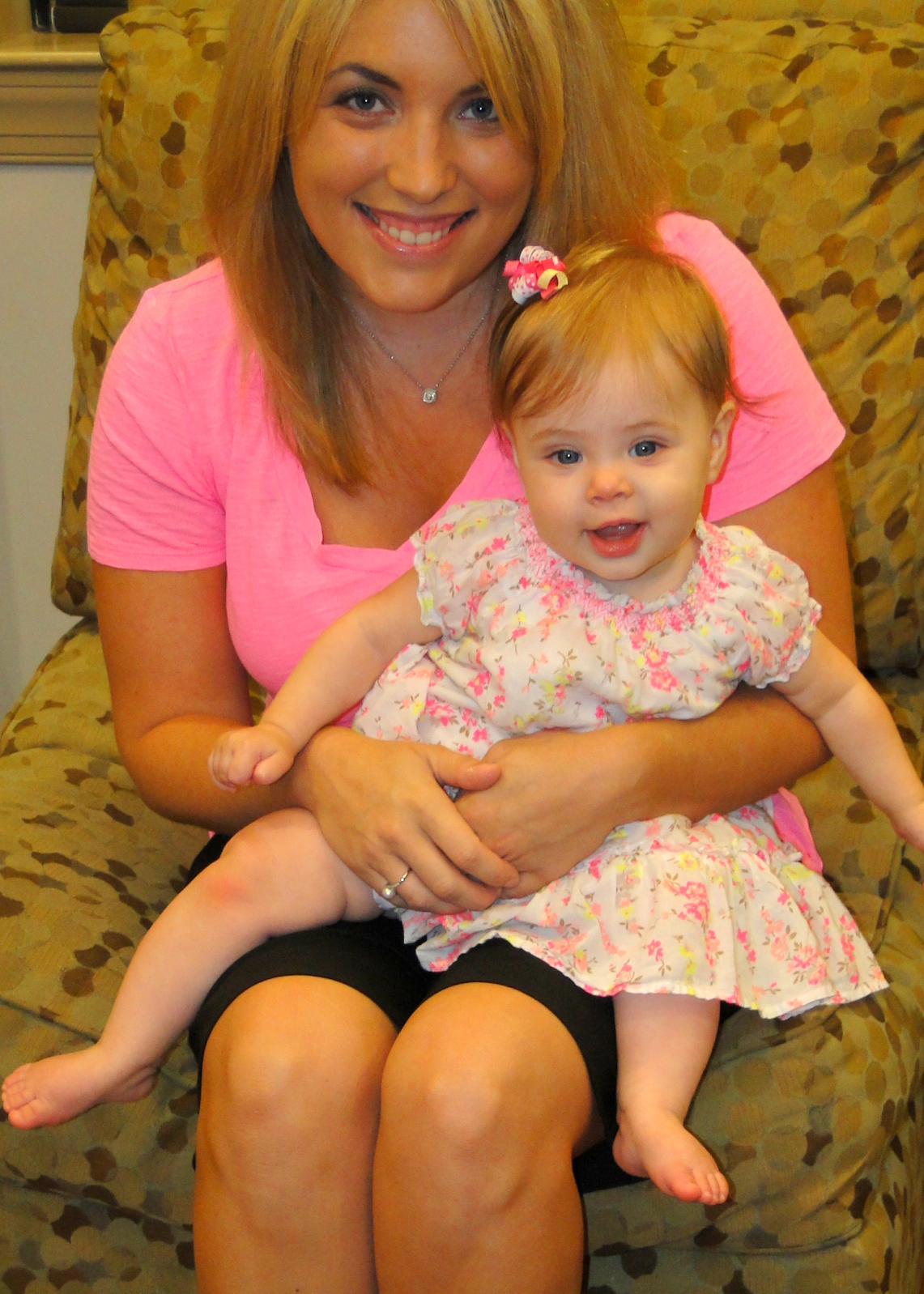 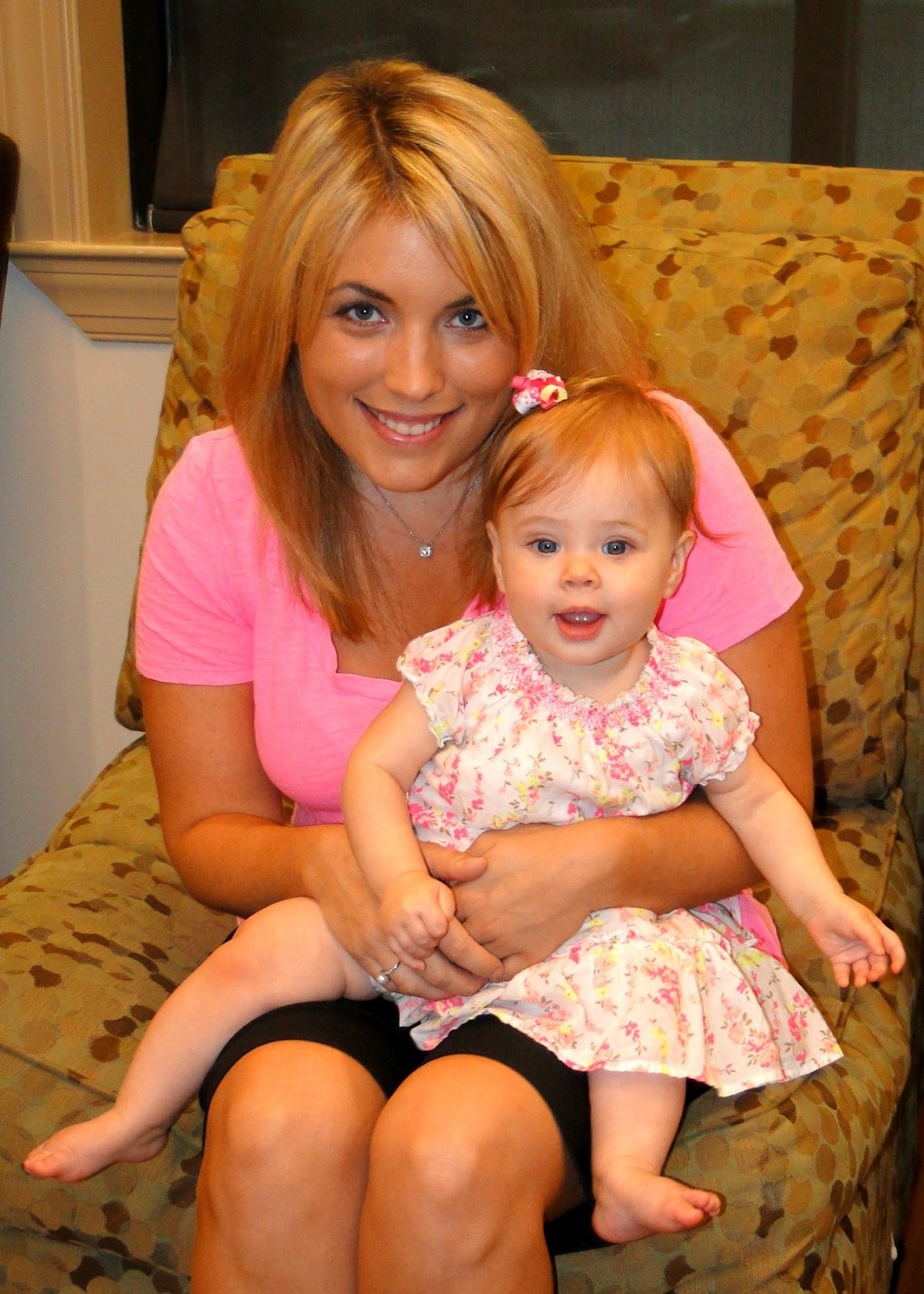 We saw Kelly this time around and I really like her. I trust her completely as she’s the one who realized Kye’s private issues. With a find like that I know she knows what she’s talking about 😉 Right off the bat they took Britt’s weight. Last appointment (her 4 month appointment even though she was closer to 6 months old…) she weighed 16.2 lb and was in the 80th percentile. I expected her to weigh about 18 lbs or so. Instead the scale only said 17.3 lb. She gained only a pound. Her stats at this appointment were: 17.3 lbs (55th percentile), 27 inches long (50th percentile), 16.5 inch head circumference (24th percentile).

At her last appointment (on May 4th) her stats were: 16.2 lb (80th percentile), 26.25 inches long (91st percentile) and 16 inches head circumference (30th percentile). While she gained weight, got longer, and her head grew in the 2 1/2 months since her last appointment…her percentiles all dropped. And dropped a decent bit. Her head circumference dropped 6 percent, length growth dropped 41%, and weight dropped 25%. This is my first time EVER experiencing my child drop in percentages.

I felt concerned from just seeing her weight. I knew she hadn’t gained as much as she should have in that amount of time. Since her last appointment we have introduced solids and I’m doing Baby Led Weaning which is a different way to feed a baby. I had also noticed that since she started solids my milk supply was down some. My breasts no longer felt super full in the mornings. I didn’t have that NEED to pump/nurse if she was drinking a bottle instead of eating from me. She was nursing WAY quicker too. I had started doing Slim Fast and didn’t know if my supply was going down just because she was eating solids or if my diet was messing it up.

Kelly came in to look at Britt and talk to us. She said right off the bat that she could SEE the inflammation of Brittlynn’s top gums and that we should be expecting some teeth up there in the near future. I showed her the birthmark spot on her ankle and she said it’s what I assumed, a birth mark. That it’ll probably be less noticeable as she gets older because she’ll have darker skin. I have a similar spot on my back and it always looks more than than the rest of my back…no biggie!

We went over her milestones and she’s doing GREAT. Ahead of the pack in pretty much every area 🙂 I did mention that my What to Expect the First Year says a baby her age should be able to make that wet, razz sound but that Britt’s never done that. She said it’s totally not something to worry about and that she’s doing great in every other area of development so it’s nothing to fret over!

I talked to her a bit about cleaning Britt’s ears. I personally clean my ears more than I should..I just HAVE to clean them when I get out of the shower!!! I have those baby q-tips to clean the kids ears with and Zach doesn’t like to use them b/c he feels like we shouldn’t be cleaning their ears. I know you’re not supposed to clean WAY down in the ear but the kids walking around with globs of wax where you can see it is gross. She said the baby q-tips are fine but that it shouldn’t be a daily use thing…wiping them out with a washcloth every night though is a good habit to be into.

They asked me a lot of questions about Britt’s diet and her solid food intake. I told them a little about Baby Led Weaning and how I was just giving her pieces of real food. I don’t think they were impressed with that haha. Kelly did tell me that it’s okay to introduce some dairy (I wasn’t sure if it was okay or not?!?!) and to get the yo-baby yogurt and stuff like that.

We talked a good bit about Brittlynn’s stats. When we left I felt like Kelly didn’t seem overly concerned about it. Zach, on the other hand, thought Kelly seemed very worried but that she didn’t want to hurt my feelings or put down my parenting. Zach is good at reading people…so he was probably right. I was pretty surprised that the recommendation seemed to be to UP her solid intake. If anything I’d personally think the best thing would to be to focus more on getting her to nurse better and longer to have a FULL liquid feeding each time. They sent me home with a print-out of portions and amounts I should be giving her of each food group for baby food.

I gave it all a lot of thought. I, of course, don’t take her drop in percentages lightly. I put it out there on Facebook and thank you to allllll of the mommies who replied and helped me out! It made me feel SO much better that a LOT of other babies drop in their percentages too. Maybe she was just going through a growth spurt before the last appointment and is balancing out now???

My mommy gut told me that her stat issue wasn’t to do with her intake of solid foods. She LOVES eating solids and GRUBS out. I have made a few changes to how I do solids with her just to help…I try to give her more food on her tray and let her eat longer than I used to. I also started giving her rice cereal and mix in some baby food with it (I buy the baby food of things she doesn’t get to eat in her diet like prunes and pumpkin). I just plop the cereal on her tray and she eats it. I also give her a piece of toast every couple of days. I figured some carbs will probably help her gain a little? I KNOW that solids are not a must for her first year so I haven’t overly stressed about changing that part of her diet.

I feel like the MAIN issue wasn’t with the solids…it was with ME. I truly believe my diet and doing Slim Fast while nursing was a badddd idea. I started doing the 24 Day Challenge with Advocare and through the challenge I had to start drinking a TON more water. When I put on Facebook about my concerns for Britt SO MANY people recommended for me to up my water intake so it worked out perfectly with starting the challenge! I also started MAKING her nurse longer. When she seemed like she was done I’d continue to offer it to her again and again until she would get pretty annoyed at me 😉

A few weeks later I had MY yearly physical. I recently made the kids dr my dr too (isn’t that awesome?) and when I went in to see him I mentioned my supply concerns. I felt like it was improving (I was starting to wake up feeling “full” again, etc) but he did recommend for me to try some lactation supplement as well. He said his wife took it too and it wouldn’t hurt anything. I bought some but don’t take them regularly. I typically have TOO MUCH milk and I don’t want to overdue it…I can tell a BIG difference when I take them and I feel like I have oversupply. I don’t want to deal with those issues again either so it’s a balancing act. Update: Since so many of you asked…the supplement my dr recommended for me to take was a lactation support one by a company called Gaia…you can actually order it from Amazon HERE. I bought it from a local place in town and when I asked about it the store owner told me that she knew a woman who had stopped nursing her child for 6 weeks and decided to start nursing again so she took this supplement and was able to get her milk supply back!!! Pretty legit stuff 😉

Kye and Brittlynn both behaved beautifully for the appointment. Brittlynn had her shots and Kye and I waited out in the hall for her. Poor thing was so sad to hear 🙁 She did MUCH better this time around though. The Tylenol really helped and she was back to her old self quickly!

We don’t go back for her 9 month appointment until September but they did tell me I can bring her in for weight checks. I probably won’t mess with doing that. I did do my own weight check the other day at our house (I weighed myself then held her and weighed myself again and took the difference) and it said she weighed 18 lb. It has been right at a month since this appointment so I feel like gaining 13 oz in 4 weeks is pretty good!!!

Overall I’m not that concerned. If she had LOST weight then I’d be a lot more worried. But the girl has TINY feet. If you can judge a kid like you can a dog (can’t you tell a big a dog will be by looking at its paws?!?!) then Britt isn’t going to be a super big child. She is 8 months old now and still only can wear a size 3-6 month/size 1 shoe! I think she’s just naturally thinning out some and slowing down in her growth and, as long as she’s HEALTHY, I’m okay with that. Kye was always a chunk and it’ll be neat to have a petite girly girl 😉 I’m interested to see what her stats are at her next appointment!

Has your baby experienced a drop in percentiles? How did YOU handle it? I always love advice 🙂