Britt and I had a solo morning to her 3 year well visit. For Kye’s 4 year check-up Britt was 15 months old and we brought both kids to the check-up and had a combo visit. It was during that visit that our PA recommended getting Kye’s bone age checked. I was SO swamped with both kids that I wasn’t able to FULLY listen and FULLY pay the attention to the situation that I wished I’d been able to. Which is why I try to take the big kids to their visits alone now, I take Britt to Tess’s stuff but I don’t have any combo-check ups anymore. I want to make sure each child gets my FULL attention at their appointments!

Britt was excited for the solo time with Mommy and since she has visited the dr so often lately for Tess’s appointments it was fun for her to be the patient for a change! NO shots for the 3 year visit so I was totally content to take her solo 🙂

We did her measurements and at 3 years old Britt is 38 inches tall (90th percentile) and 29 pounds (35th percentile) her BMI is also 49. This time when I did the Height Predictor it says she’ll be 5’6″ at age 18. Still a lot taller than her mama but shorter than it predicted after her 2 year visit.

Compared to Kye’s 3 year visit…he was 37 inches and 33.5 lbs. She is for sure a tall little girl! I knew mentally after going through Kye’s growth delay stuff that you always want to see at least a 2 inch growth in height each year! Britt went from 36 inches at her 2 year to 38 inches this year so I felt good about that, although she’s just SO tiny in the weight department! She did gain 4 lbs in a year which I guess is okay? 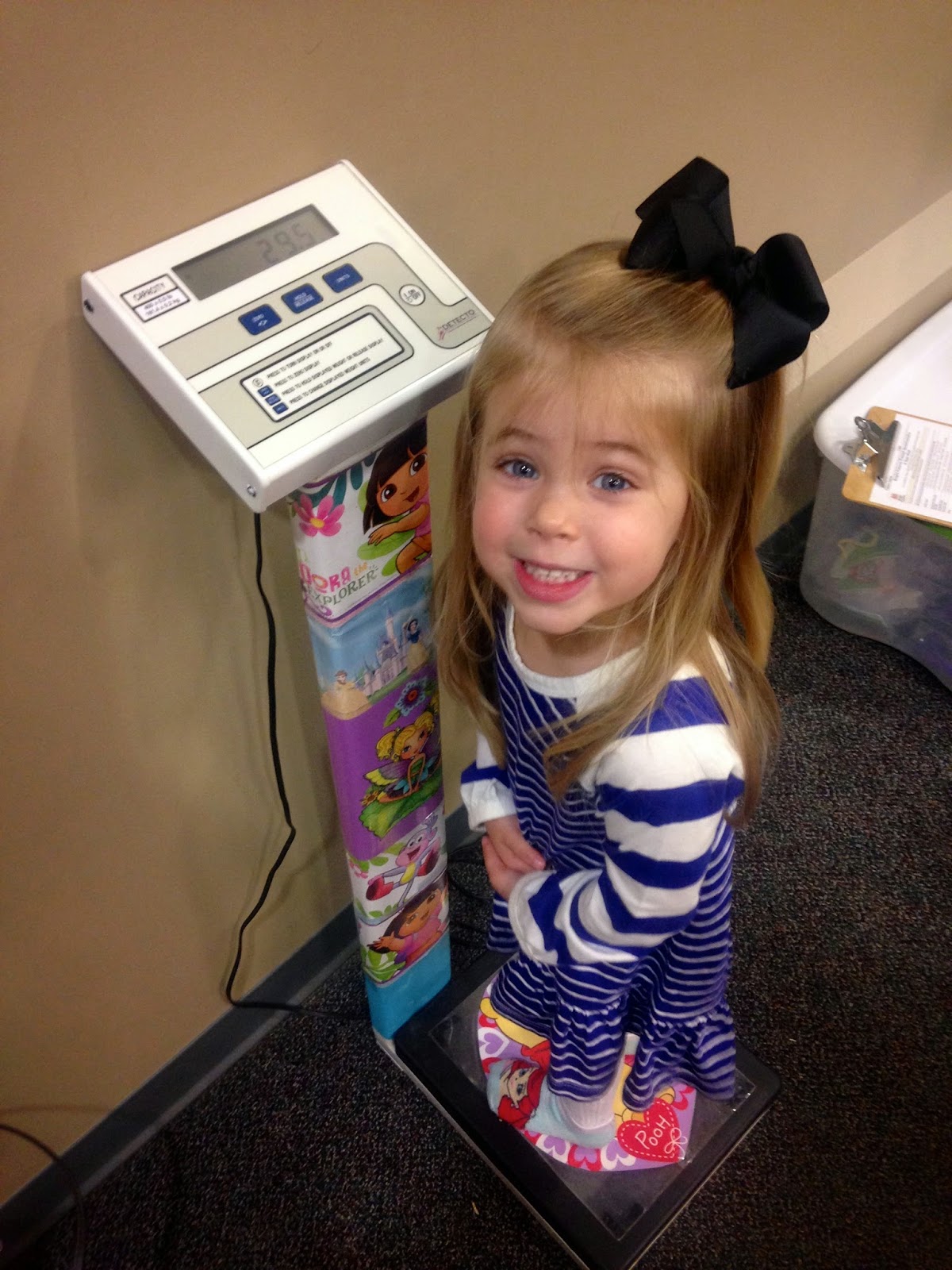 Britt had her hearing and vision tests and it was so funny. She is just a silly kid. She kept not raising her hand when she heard the beep and the girl had to keep asking her if she heard it. And then when it came to the vision she was just saying random stuff. She said she saw a purse! a heart! a cup! Just random objects when they weren’t anything close to what was on the chart. They said it’s not something to worry about at this age and that they do a better check at 4 years.

While doing her tests I had to fill out a new form. I took a picture of it but it turned out blurry. It was crazy that I had to fill it out and I couldn’t believe that my pediatrician would come up with such dumb questions. Turns out it wasn’t from their office…it’s a new thing from the government. It asked stuff like if I have questions about how to show my child affection? And it had a whole section of things I had to check off if Britt could do them or not. Some of the stuff I’d never even had her do before? So we were waiting and I was telling her to hop on one foot and draw a circle to see if she could do it all bahaha. Quality parenting 😉

We talked about her speech. Britt has been talking forever and says a ton of words but I don’t know if she speaks very clearly to others? She also has a very “babyish” sounding voice. Both things our PA said are fine and normal and that she’s doing great.

We talked about auto immune diseases again at this appointment. It’s really something that I worry about. I know you can’t worry about the future but it crosses my mind and my heart hurts when I think about it. The family gene is VERY strong for autoimmune diseases and my girls “are next” genetically speaking in the order of how it’s been passed down so far. I know it’s a possibility that one or both of my girls may face a diagnosis at some point and I just always want to make sure I’m on top of it. I want to know what to look out for and what to be prepared for. If there are tests we can do to see if they are likely to have something, then I want the tests done. I’m a knowledge is power person and I’d rather KNOW than not know. Really at this point we still can’t do much. Our local dr, who Mrs. Charlotte and Courtney see, doesn’t see children. So if we wanted to talk with an autoimmune dr we’d have to travel to one and there just isn’t a need for that yet. Once she turns 5 or 6 our PA agreed with me that it’d probably be a good time then just to check around and see if there are tests or anything to do.

We also talked a little about Britt’s finger sucking. I showed her how it’s affecting her fingers. They are both looking more “pointed” and thinner and have sores on them. She said it’ll probably get worse and that the skin just falls off from being so wet. She, like our pediatrician, didn’t really have any advice for stopping it. It’s a frustrating thing b/c it’s not like we gave her her fingers (like we did Kye the paci) so it’s nothing we caused and nothing we can really control either. I’m hoping the dentist will helpful when we go in April!

Britt did great for her check-up and was a very big girl! She’d had a fever the night before and was a little whinier than usual so I was glad for the timing of the appointment as I wanted her to get checked out to make sure she wasn’t sick. She didn’t have a temp during the appointment but when the PA looked into her ears I was SHOCKED not to hear “perfect ears!” like we are so accustomed to hearing. Instead…the pa started cracking up and said “you’ll never believe it, she has an ear infection!” I have three kids and have been a parent for 6 years now and this was our first ever ear infection experience!!! We both had a good laugh about it b/c it was SO random! 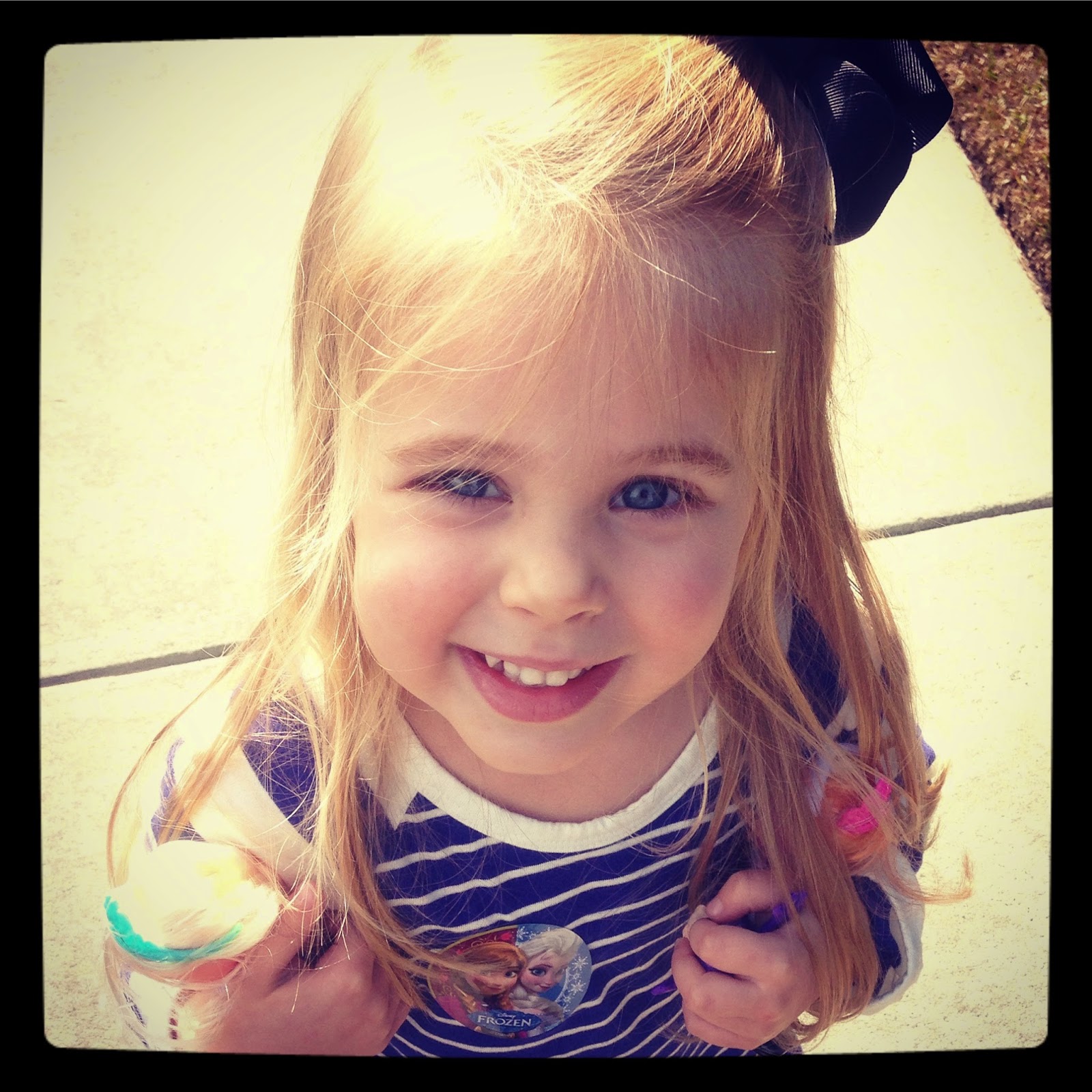 We got the meds for the ear infection and omg y’all. I’m so thankful I never had to experience the drama that is an ear infection. I knew her ear hurt. I knew I needed to be patient but it was so hard. It was several days of just the most frustrating mood! I was SO thankful when she went back to being herself! It was so strange b/c she wasn’t acting like she was in pain, she was just being so straight up disobedient which is not like her at all.

She had her ears re-checked a couple weeks later at Tess’s 6 month visit and they were back to being perfect 🙂 I’d also forgotten to have them check her belly button so they discussed that at Tess’s visit too. Britt has an outie belly button (you can see it here!) and it’s actually a hernia or something? They said it’s gotten smaller and to recheck it next year and if it’s still an issue at that point then more steps may need to be taken. I wasn’t at Tess’s visit (more on that later!) so I’m getting the info second hand but Zach said it isn’t a concern so I’m not going to worry 🙂

Overall we had a great visit! The ear infection was a shocker for sure and I’m SO thankful I got to go so long without that experience…I’m hoping we won’t have another one again for awhile either 😉