I have gone to the midnight premiere of all the Twilight movies. I’m so hardcore 😉 It started off with just a few of us, grabbing Steak and Shake before the movie and has turned into an all-out girl’s night including dressing up and everything! I’ve written a blog entry for each movie night: Twilight (I was pregnant with Kye!), New Moon and Eclipse  (so funny that Crissy was pregnant for the Eclipse night and Breaking Dawn)! It’s always a great time and this year didn’t disappoint. I may have been 1 day shy of 37 weeks pregnant but I didn’t let it slow me down one bit!

Crissy, Casey and I were the only really hardcore ones who decided to make shirts again. I just think going ALL OUT for stuff makes it SO much more fun and memorable. Crissy and I are different in many ways, but this is one way we are exactly alike. Originally Zach was supposed to be in Louisiana so Kye and I planned to spend the night at Mrs. Charlotte’s. Lucky for me Zach was home! So he and Jordan went out to eat while us girls did shirts then he came home when it was time for us to leave 🙂 Thanks to Crissy for taking the pictures so I could steal them for this post!

Ironing on my letters 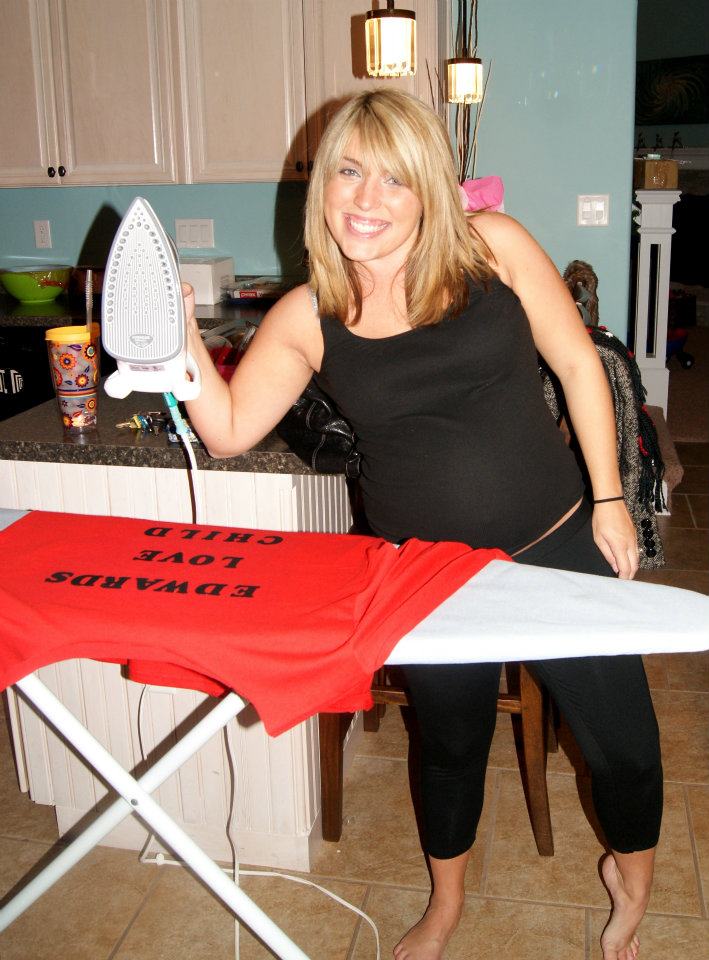 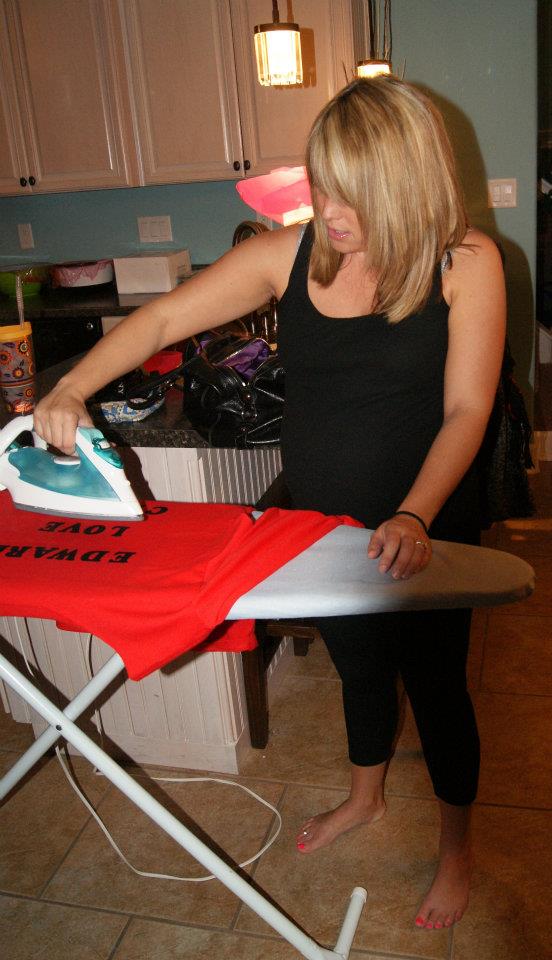 Crissy wore her “Team Jacob” (puke!) shirt while making her “Team Charley” one 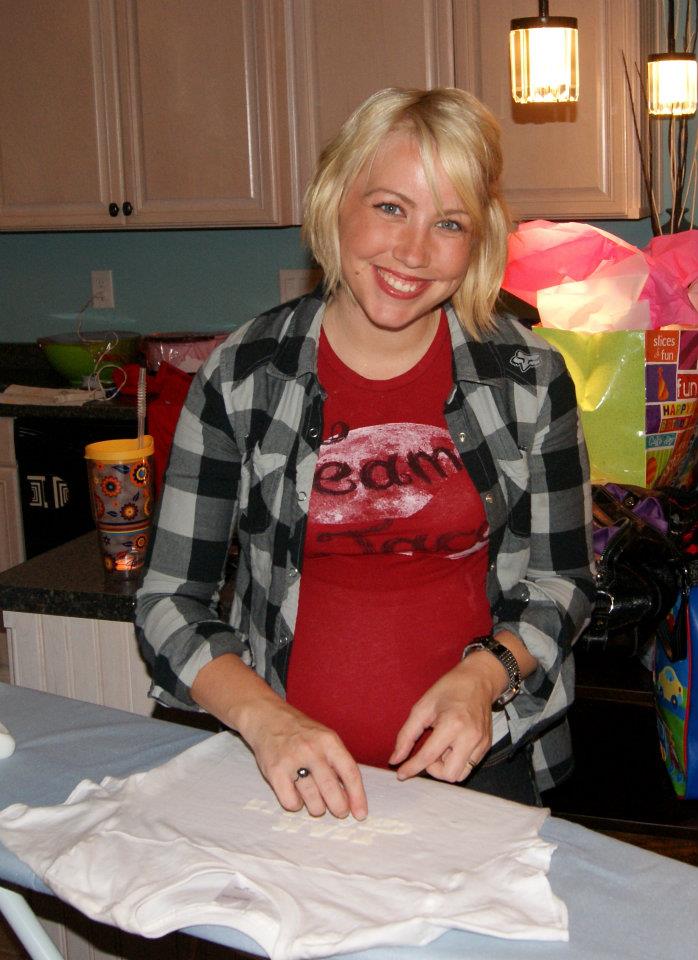 Robyn and Casey were very helpful in the shirt idea department! 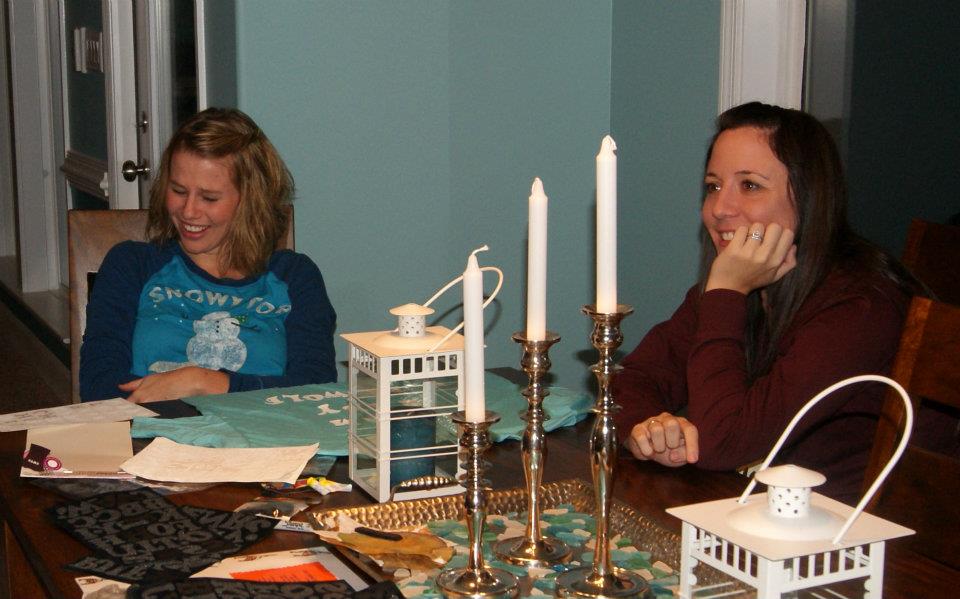 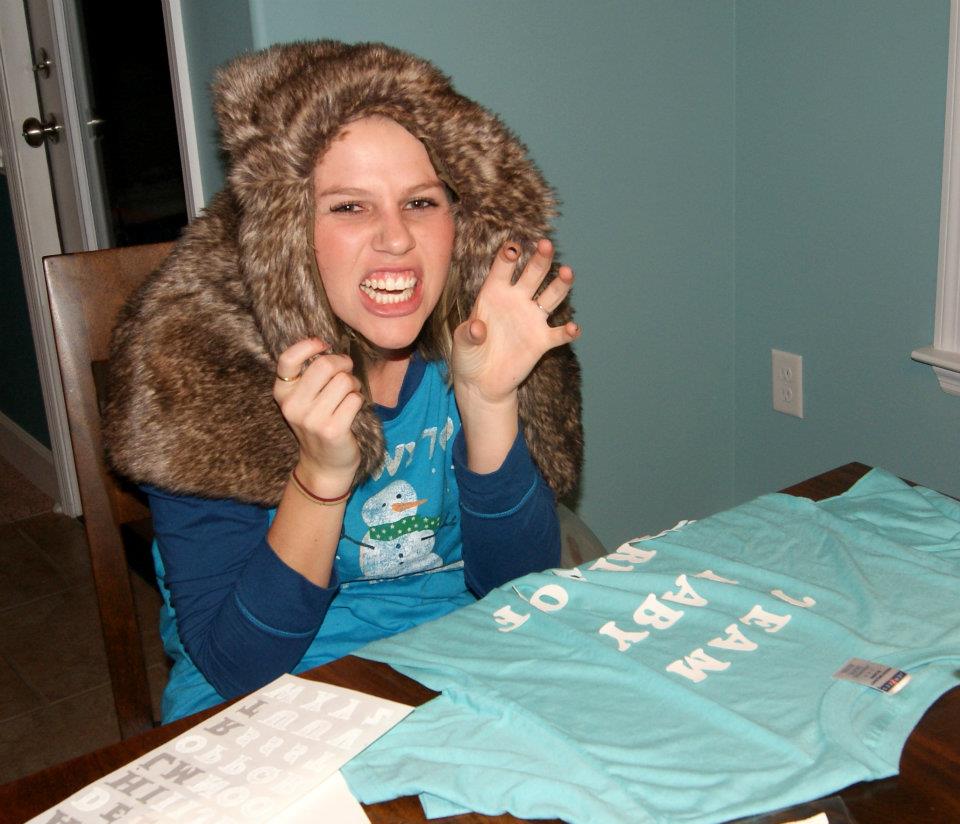 The funniest thing to me in this picture is my stomach in the background! I’m wearing a long-length maternity tank top. That junk would not stay down!!! 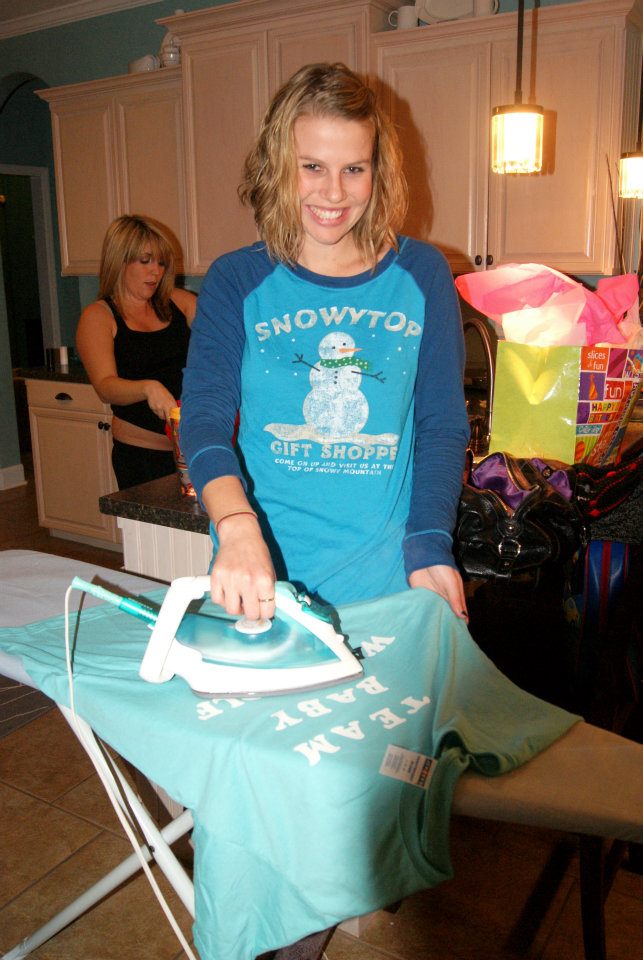 Robyn was hardcore about my need for an apostrophe 😉 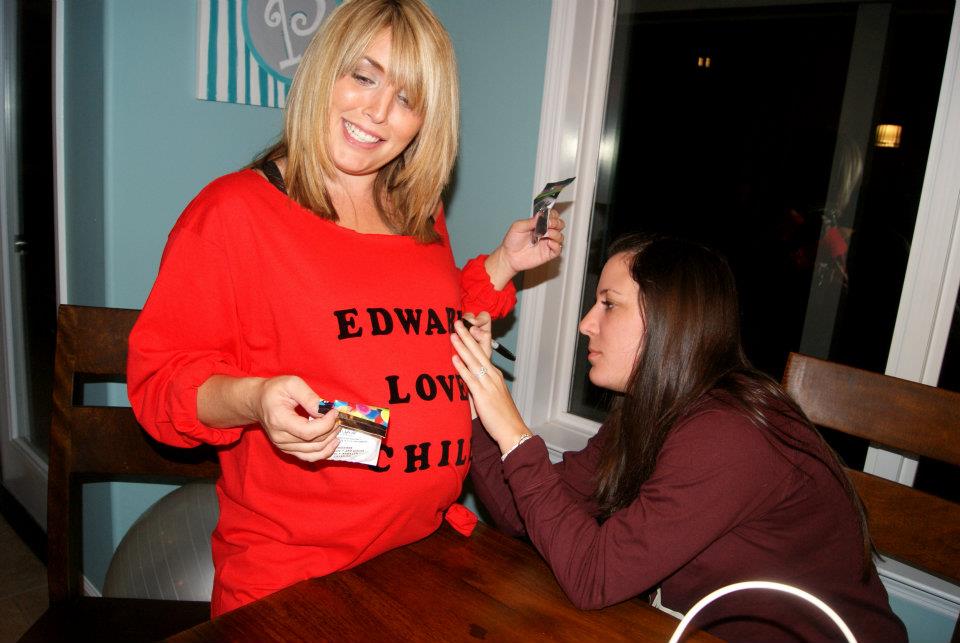 Casey’s shirt said “Team Baby Ware Wolf” (and no, not even Robyn who teaches English realized that werewolf was spelled wrong!) What made Casey’s shirt even funnier was that she ran out of A’s and had to use a black letter “A” for the “ware wolf” part when really she should have used an “e” haha. AND on top of that she copied a picture of Robyn’s ultrasound on her shirt. AND she felt like this was the pose she needed to have to go along with her shirt?!?! Hahaha. 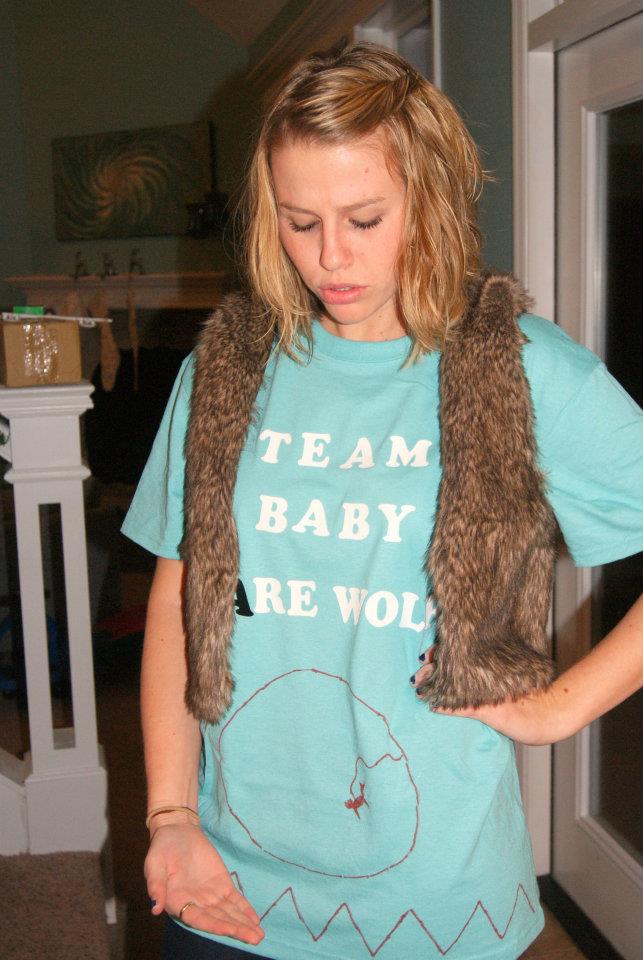 Is this your “pregnant woman face” Casey? 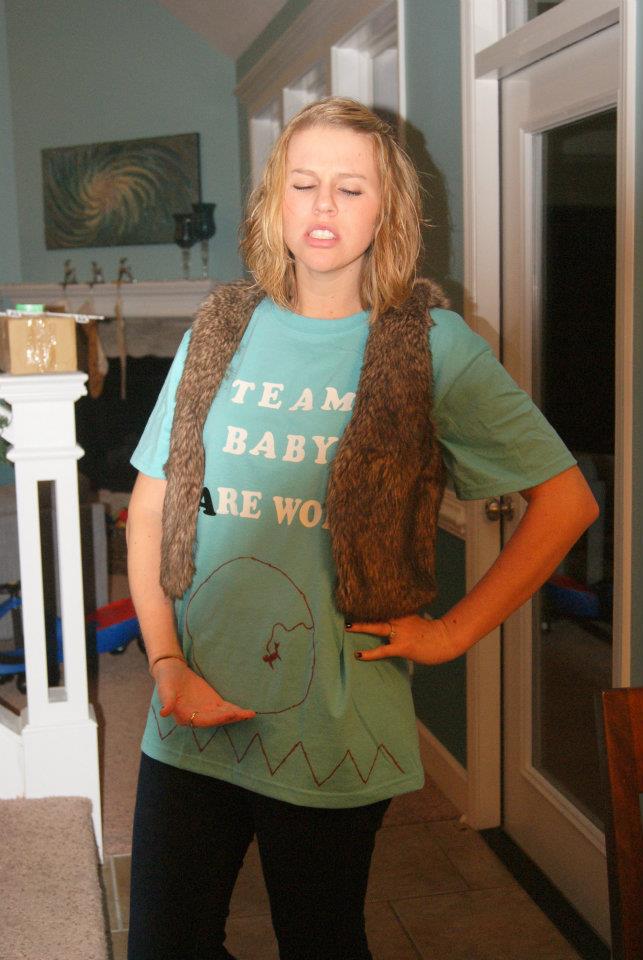 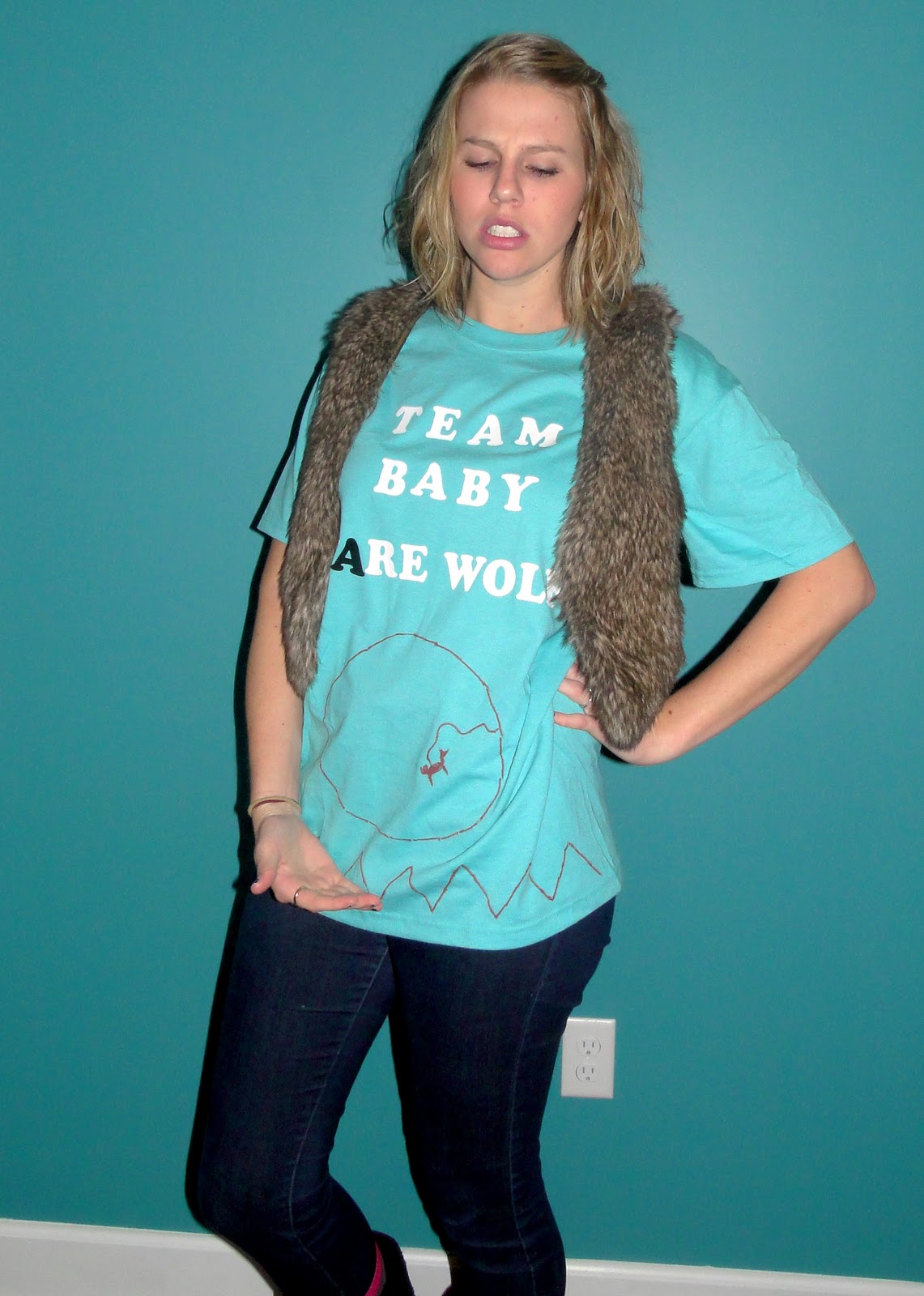 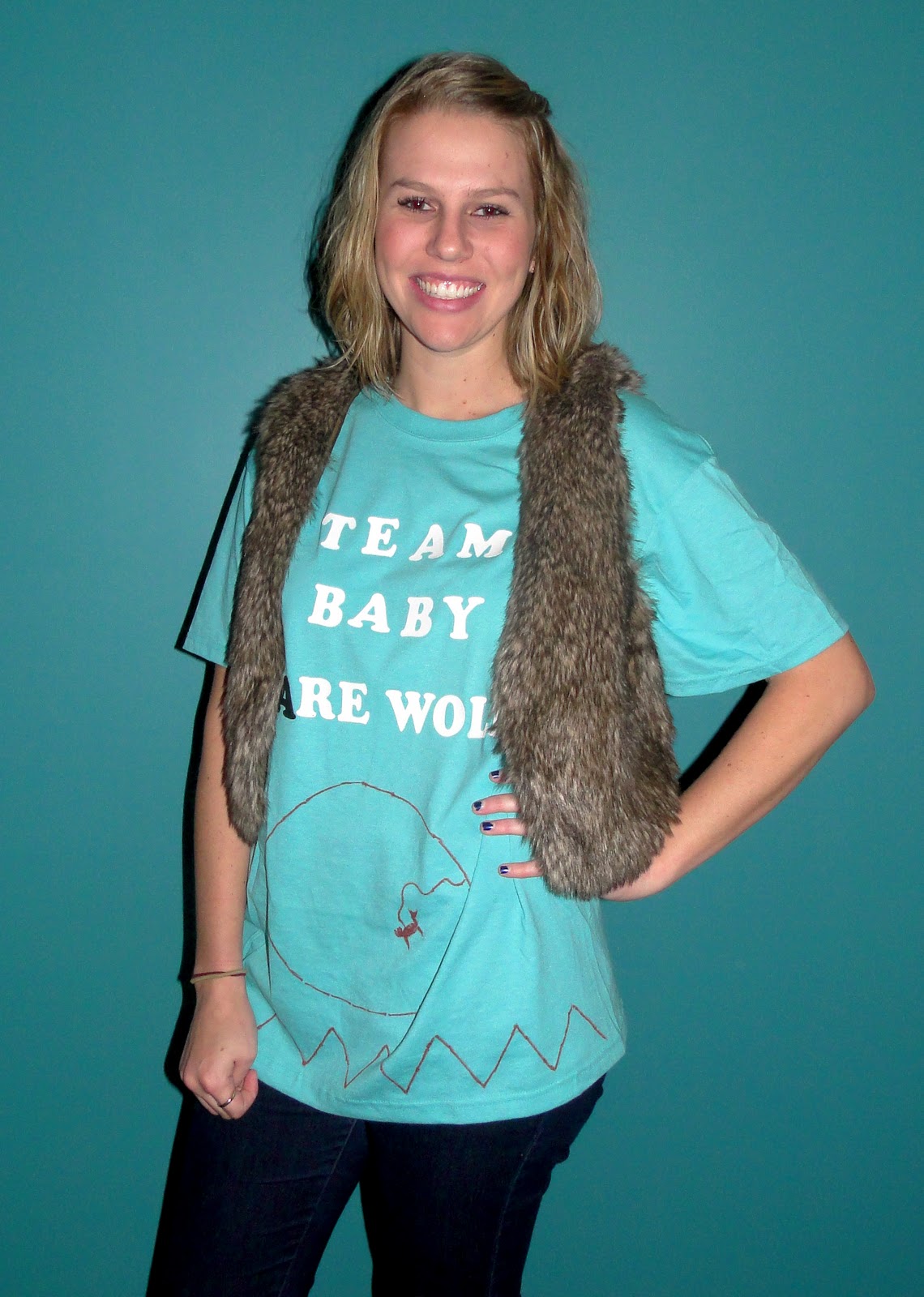 Everyone always has high expectations for Crissy’s outfits. I mean she and Seth tend to go all out for stuff so we knew hers would be hilarious. Of course, it was! What was even funnier to me was that she didn’t have to buy anything for her costume…she had it all around her house. Instead of being Team Edward or Team Jacob Crissy decided to be “Team Charley.” Who is Charley? He’s Bella’s dad…duh. And probably the worst (I mean most awesome…) actor in all the movies. Katie and Hannah especially love them some Charley moments and I think Crissy mostly did the costume with them in mind 😉 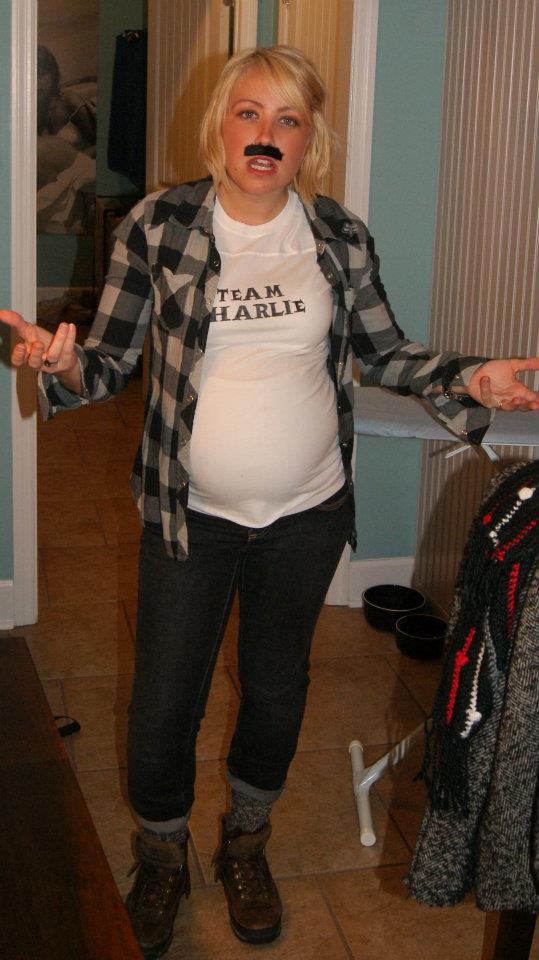 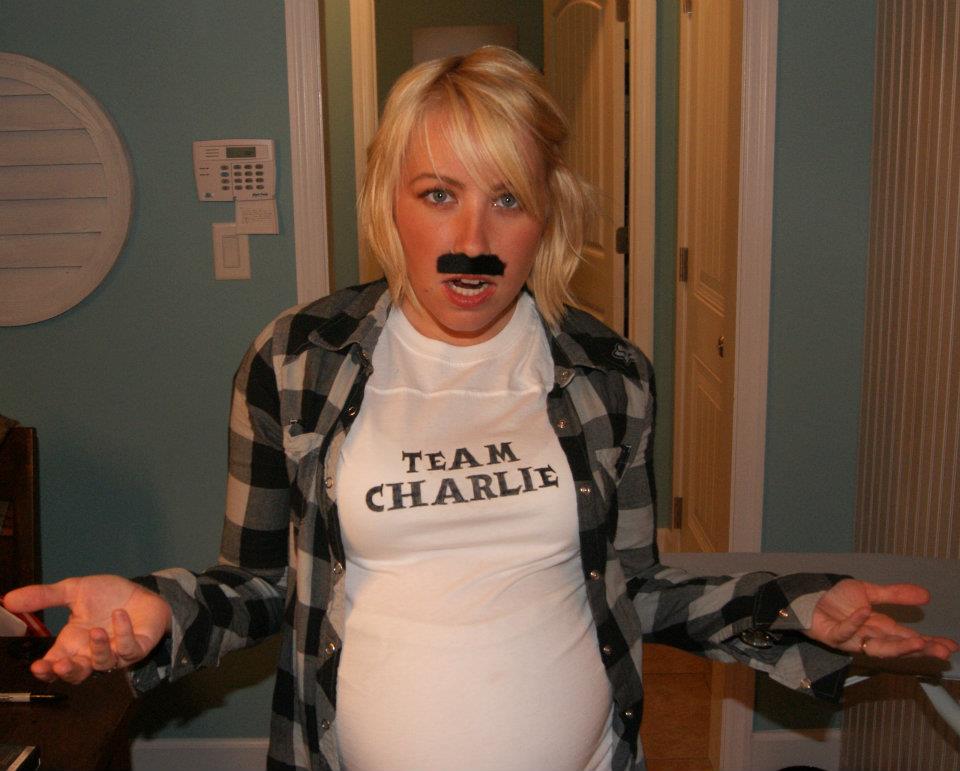 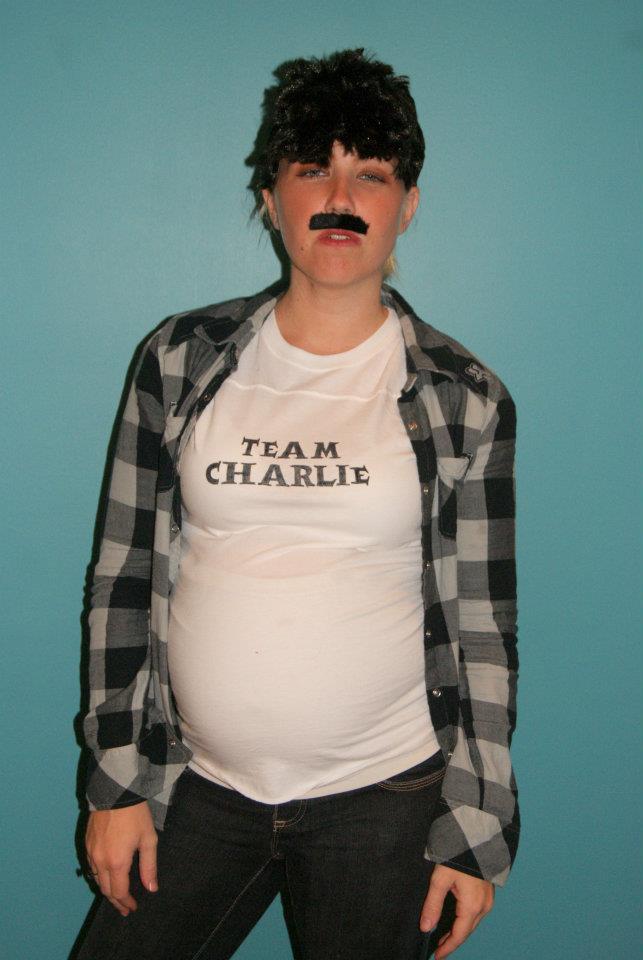 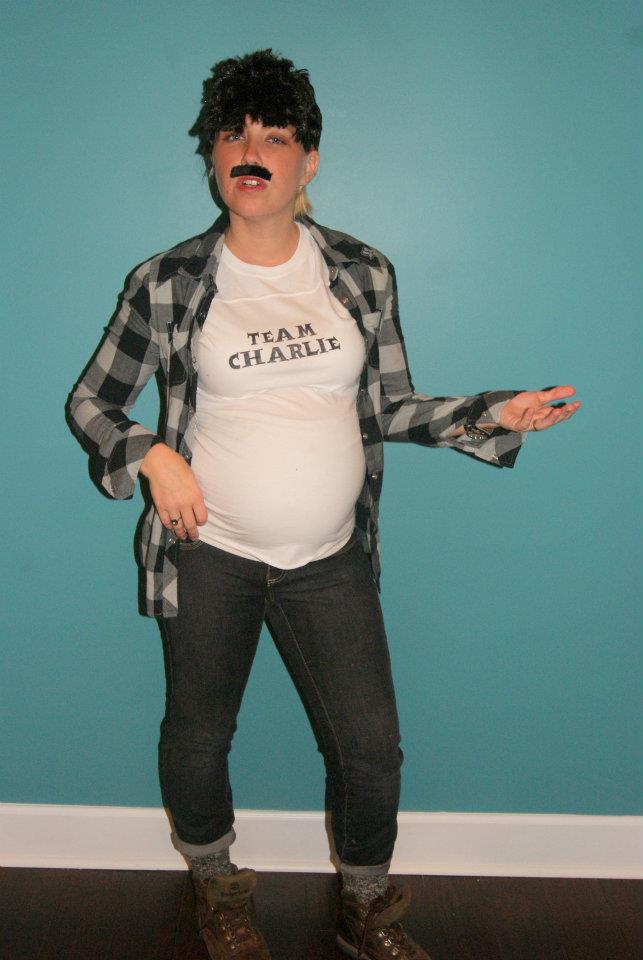 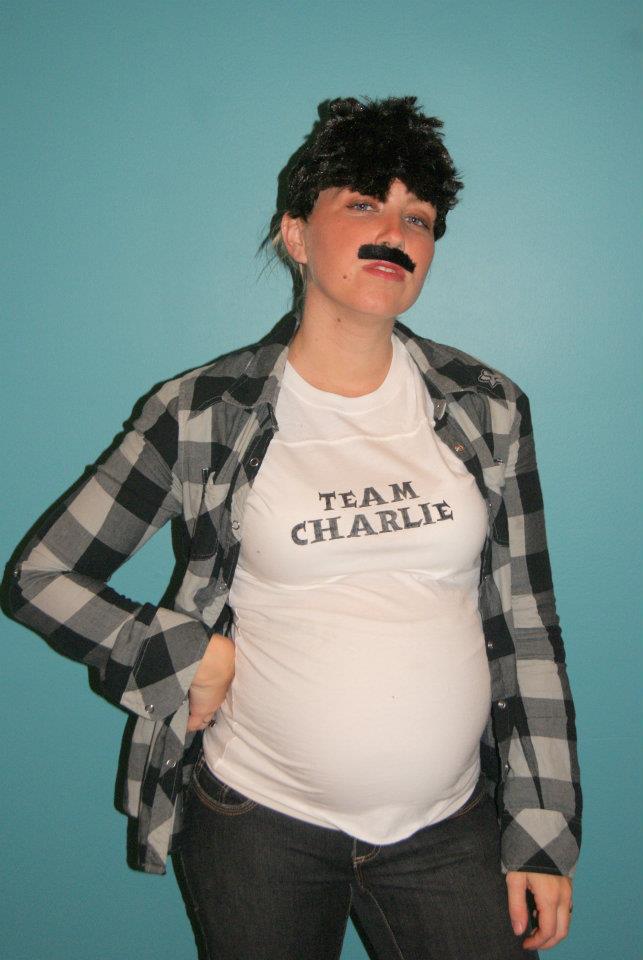 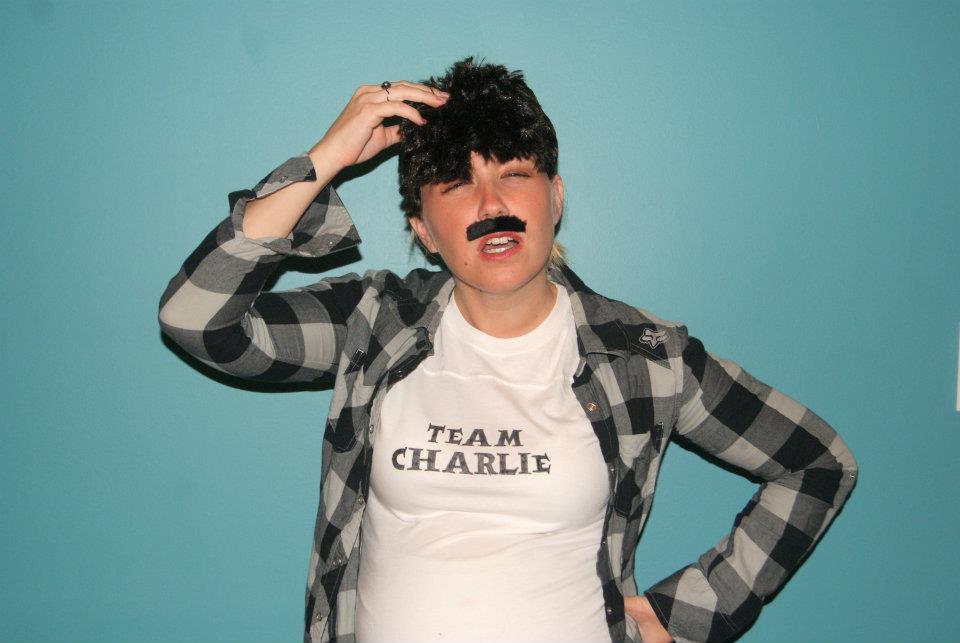 Duh, I’m hardcore “Team Edward.” All these dumb girls who love Jacob are sooo lame. Edward is WAY hotter and WAY cooler. Who would ever want to be a werewolf?!?! Now a vampire…I’d be down! My original idea was to have my shirt say “Vampire Baby on Board” but I thought that’d be too much like my Halloween Costume and I didn’t have enough letters. So I went with the first thing that popped into my head…and I honestly like it even better than my original idea 😉 I bought an XL mens long sleeved shirt from Hobby Lobby to decorate and the thing was huge. It was pretty comical but it was that or a small and, duh, this belly ain’t fittin’ in no small! 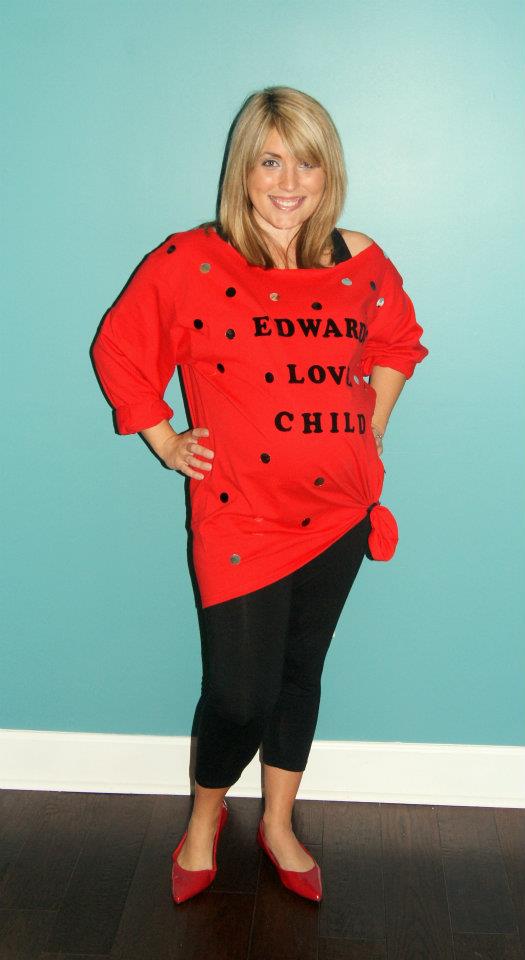 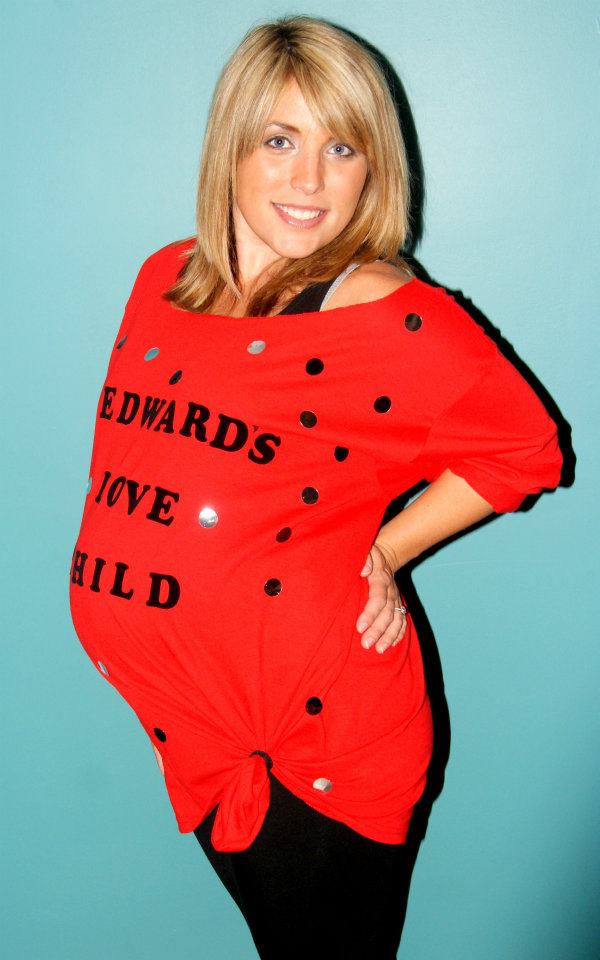 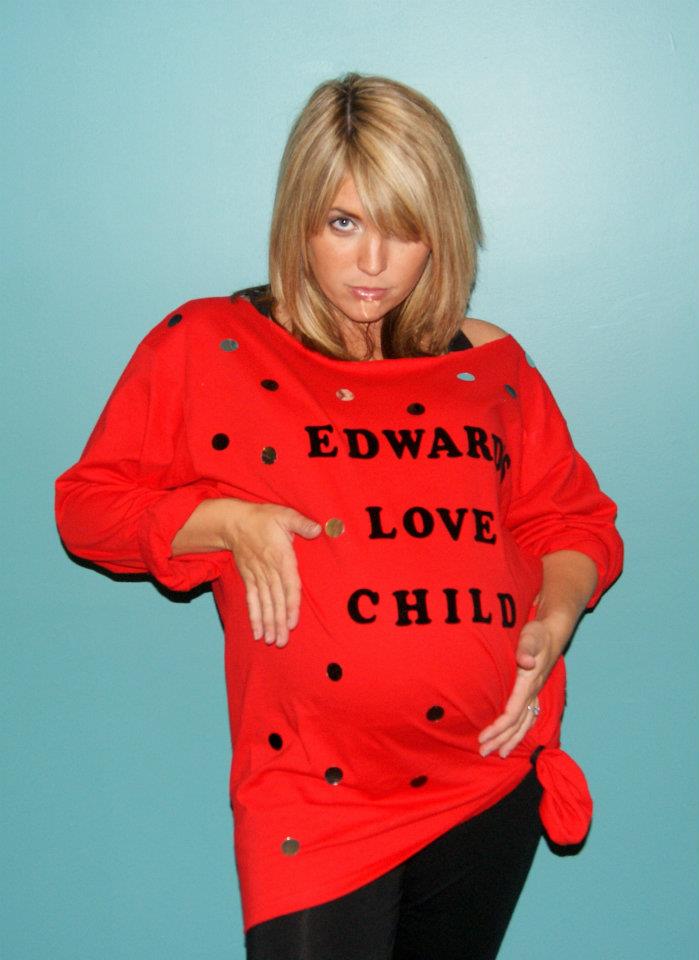 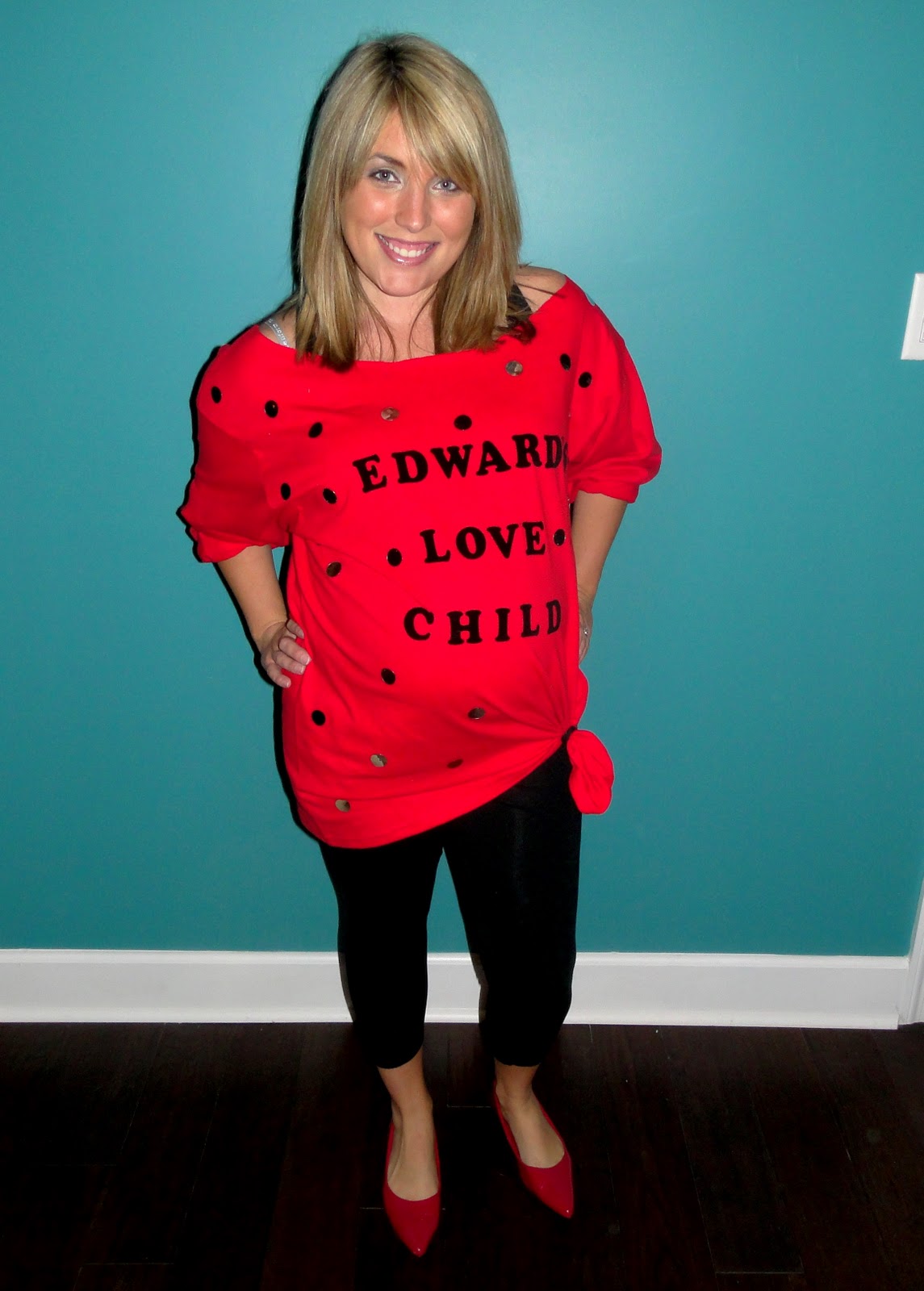 You know you want some of this sexxxxxinesss haha 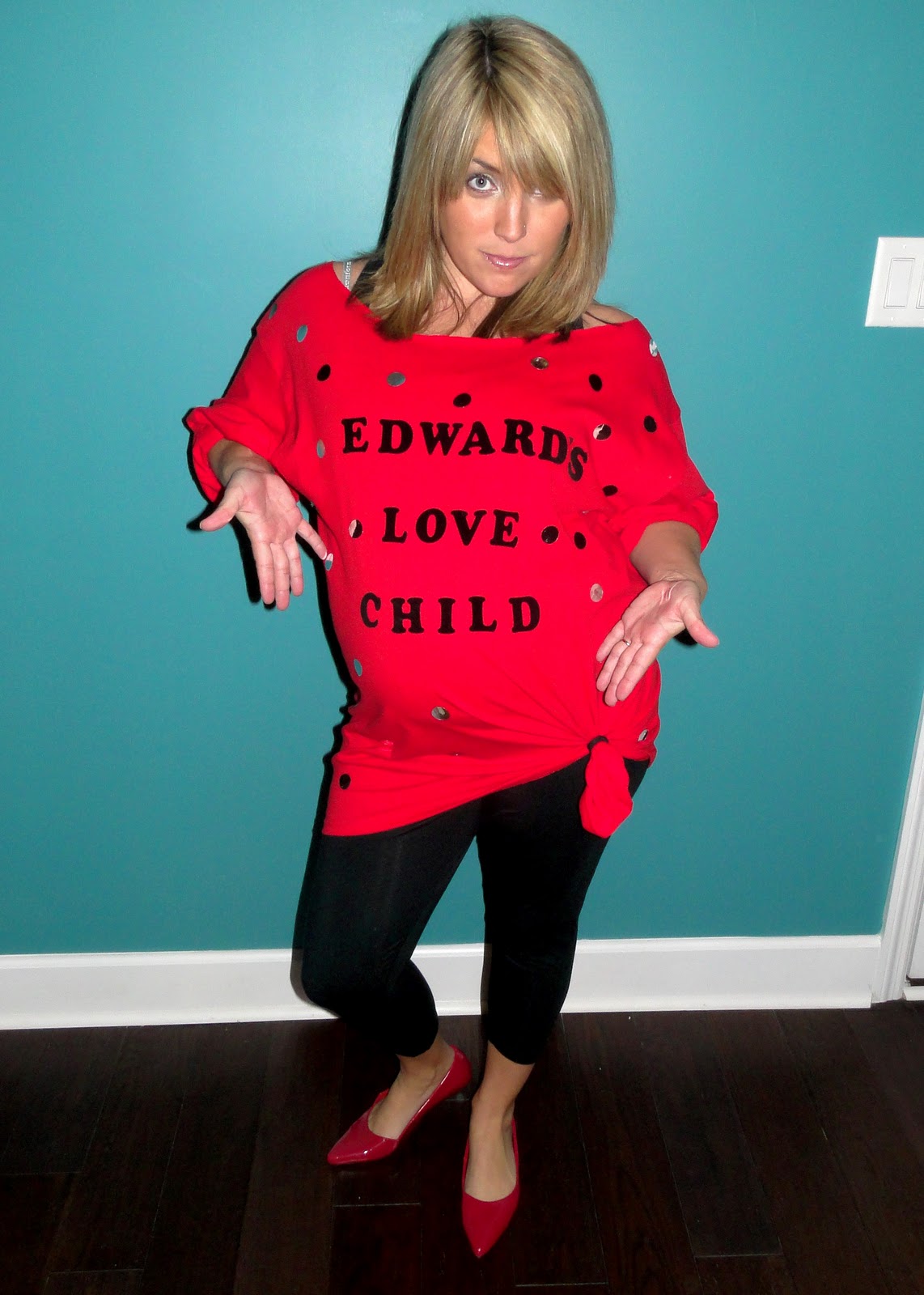 I didn’t get the memo to be “in character” but then again what type of face would Edward’s lover make? Probably one of straight up pleasure haha! 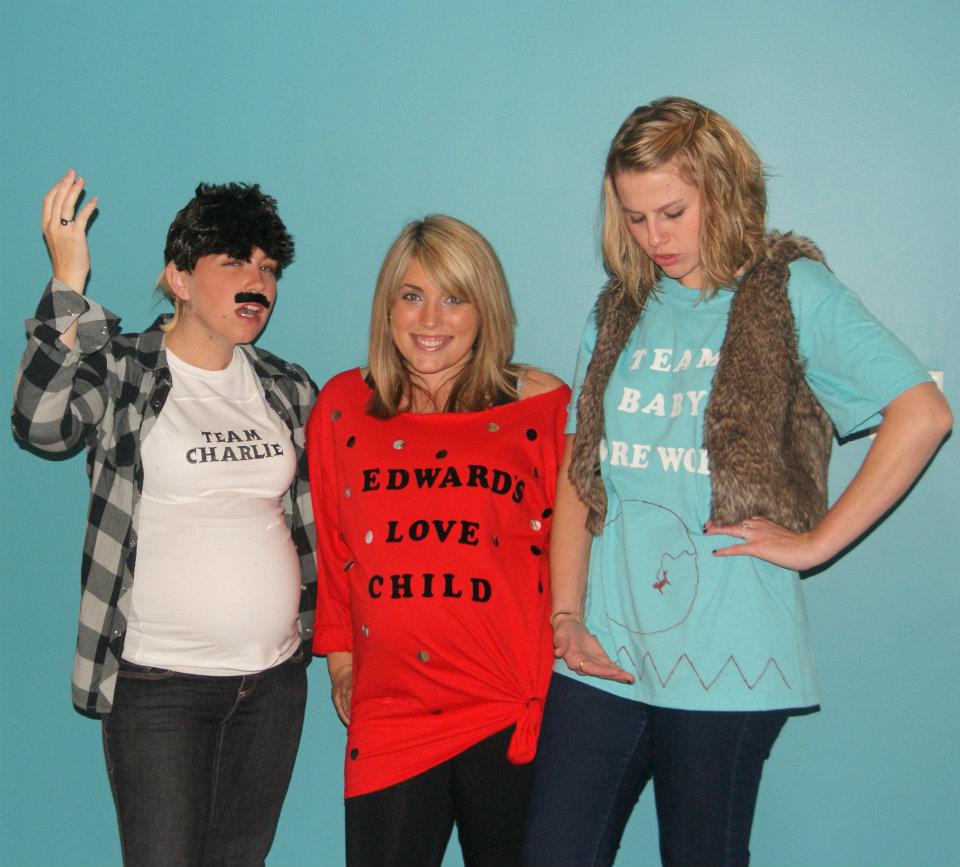 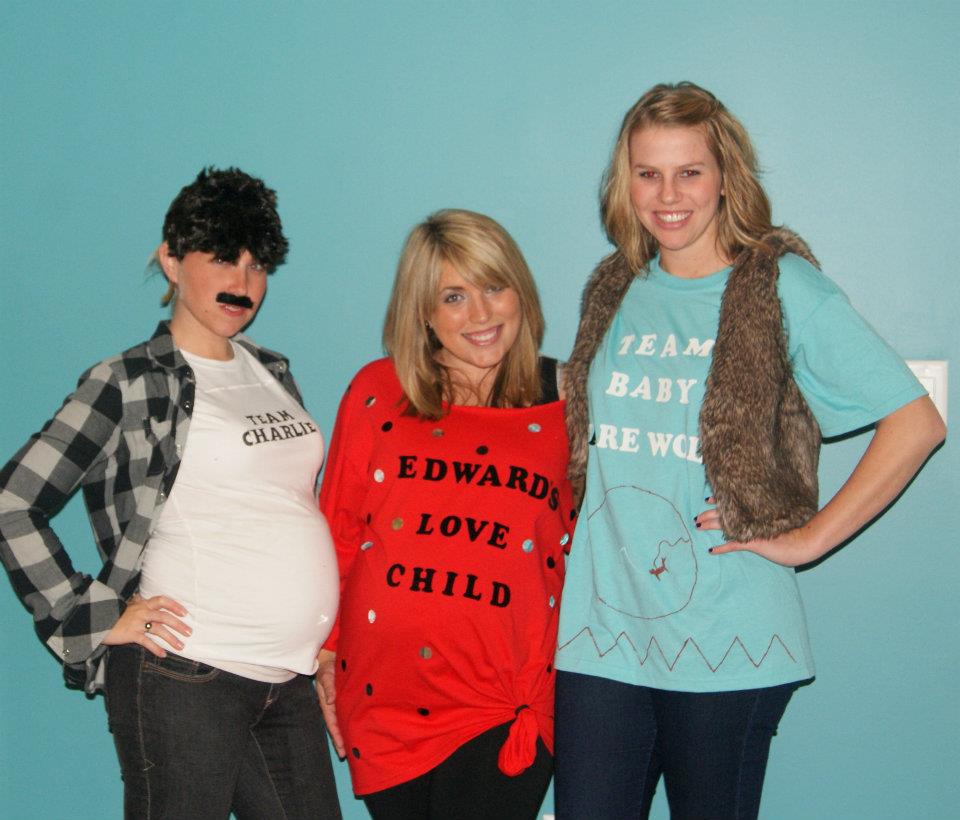 Ashley and Robyn both came and hung out but didn’t do shirts with us! At least they were fun company 🙂 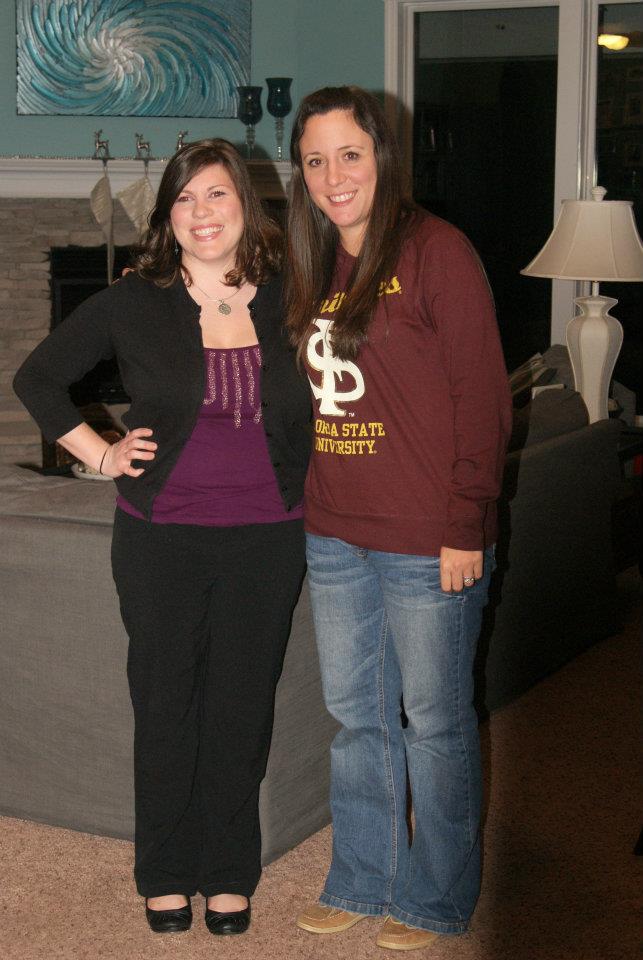 Charley…cracking us up (btw Robyn – super pretty pic of you!) 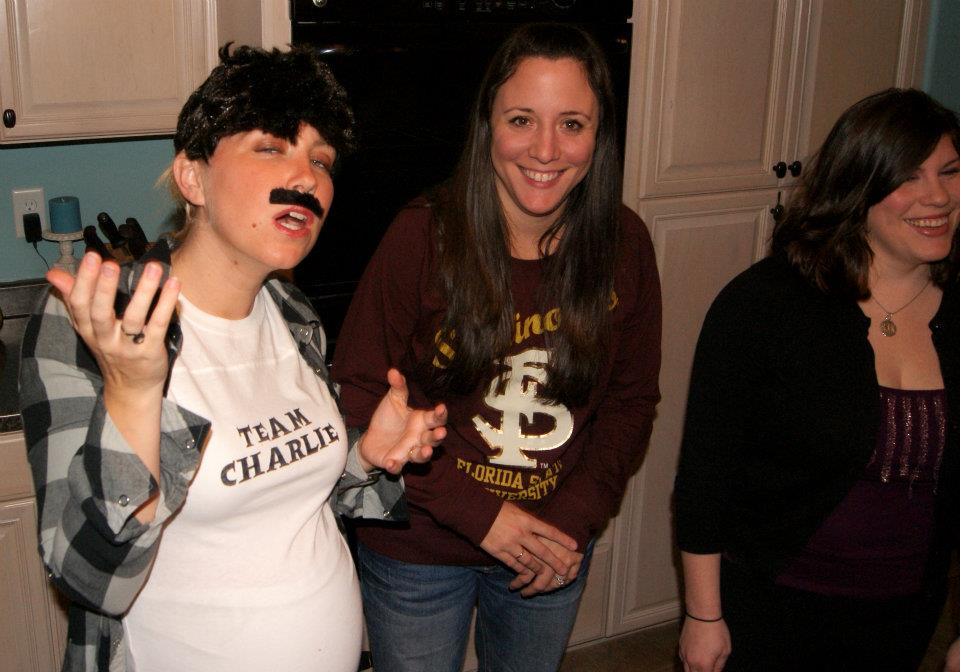 Zach came home in time to get a group shot!!! 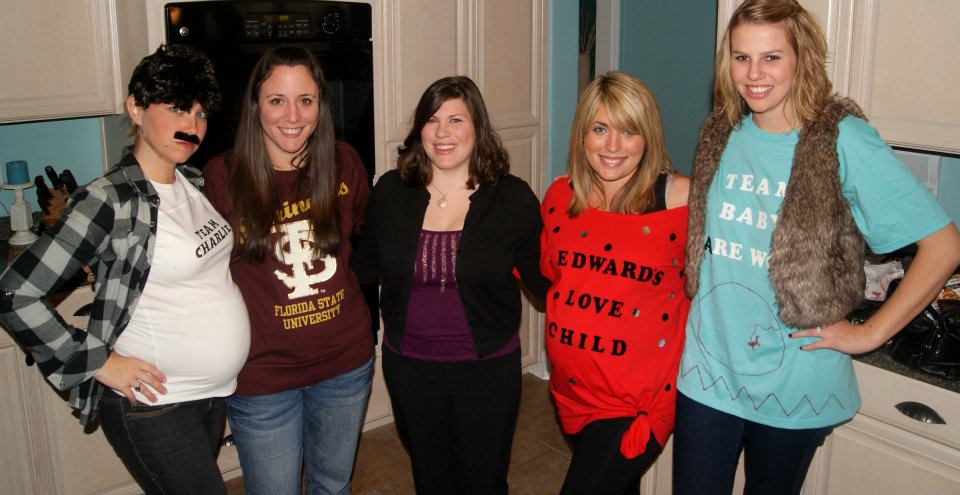 We left my house at about 9 and then went by the theater to pick up our legit tickets. It was funny to see ALL the people waiting outside so early. Why would you wait that long when you know you’ll get a seat?!?! This time people were even selling drinks and stuff! We had more important places to go than just the theater though…we had to continue on our Steak and Shake tradition!

Trying to decide what Charley (or I guess it’s Charlie) 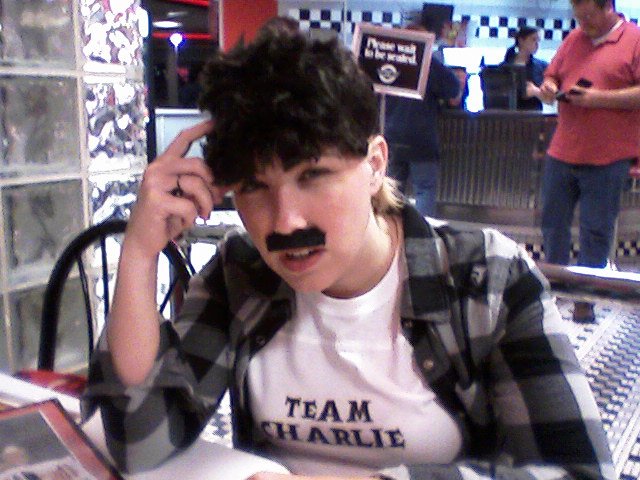 Hannah and Katie arrived late for the party (I think this is a trend ladies…) but cracked up seeing “Charlie.” The food at Steak and Shake was AMAZING. I seriously scrapped my plate and asked for double cheese and at it all. AND downed an entire large sized milkshake. This is the first movie that I didn’t get an iced coffee for…but since my leg cramping started the same night I drank one last time, I decided not to risk it and I really didn’t have any issues staying awake!

After Steak and Shake Crissy and I ran into Walgreens for some movie snacks and her Charlie attire kept me cracking up the entire night. Best moment for me was then the cashier guy at Walgreens said to her “I like your mustache!” hahahaha that’s one compliment I doubt she’ll be getting ever again! We also saw some young girl who pointed at her and said “does that pregnant lady have a mustache?!?!” Priceless. I love having friends that enjoy being silly and making fools of ourselves. It really does make for some great memories 🙂

In case you couldn’t tell…none of us are actually that into Twilight. I loved the books (Crissy hasn’t even read them) but I’m not a Twi-hard or whatever they are called. We just love having a fun tradition to take part in! I’m SO sad that there is only one movie left but Hunger Games is starting up in March and I think we should for real carry over the Twilight tradition to the Hunger Games movies. Although with Hunger Games, the books were even better and the movie looks wayyyyyy more LEGIT. I’m may become a Hunger Game Die-Hard!!!

Have you seeing Breaking Dawn Part 1??? What did you think? Personally it was my favorite of all the movies. For one reason: WAY less action scenes. I love all the love moments and this movie was filled with them. Plus there was a lot more Edward than Jacob so that especially made me happy 🙂