Zach kept Kye while I was out of town for my girl’s weekend to Atlanta. He’d been really looking forward to a fun-filled weekend and even though the rash had to change up some of his plans, I think they still had a great time together! I left Zach my OLD camera (as in my very first digital camera!) and he captured some pictures throughout the weekend. I asked him to write a guest entry about their “guy time.” Enjoy!

I will warn all the readers like I did the first time I blogged, I am not as good of a writer as my wife.

This was the first time me and Kye had a guys weekend, just the boys. This situation was not normal though because of the whole rash thing (see rash blog). But, luckily Kye was just starting to get back to his usual happy self. First things first. In order to try to introduce my son to the world of manliness, I had a few items on the agenda.  I tried to man it up all weekend in order to combat all the sissy stuff his mama does with him every day.

When Em left we went on a bike ride through the hood (Grove Pointe, very gangsta).  We stopped at the playground to talked to some ladies that were hanging out, but they were a little too old for Kye. You never know though maybe early cougars.  After that is was back to the crib and spent a little time in the sand box. 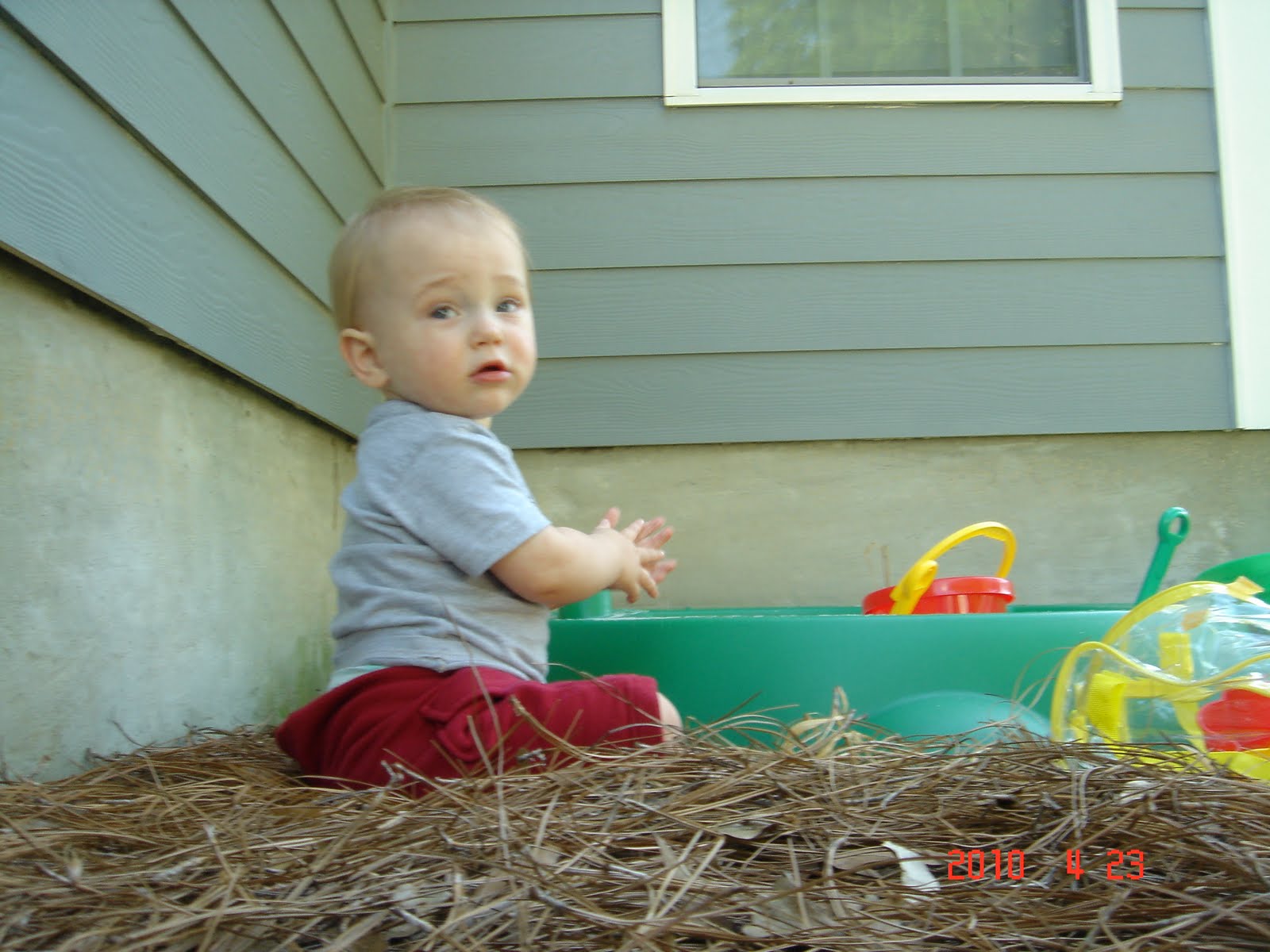 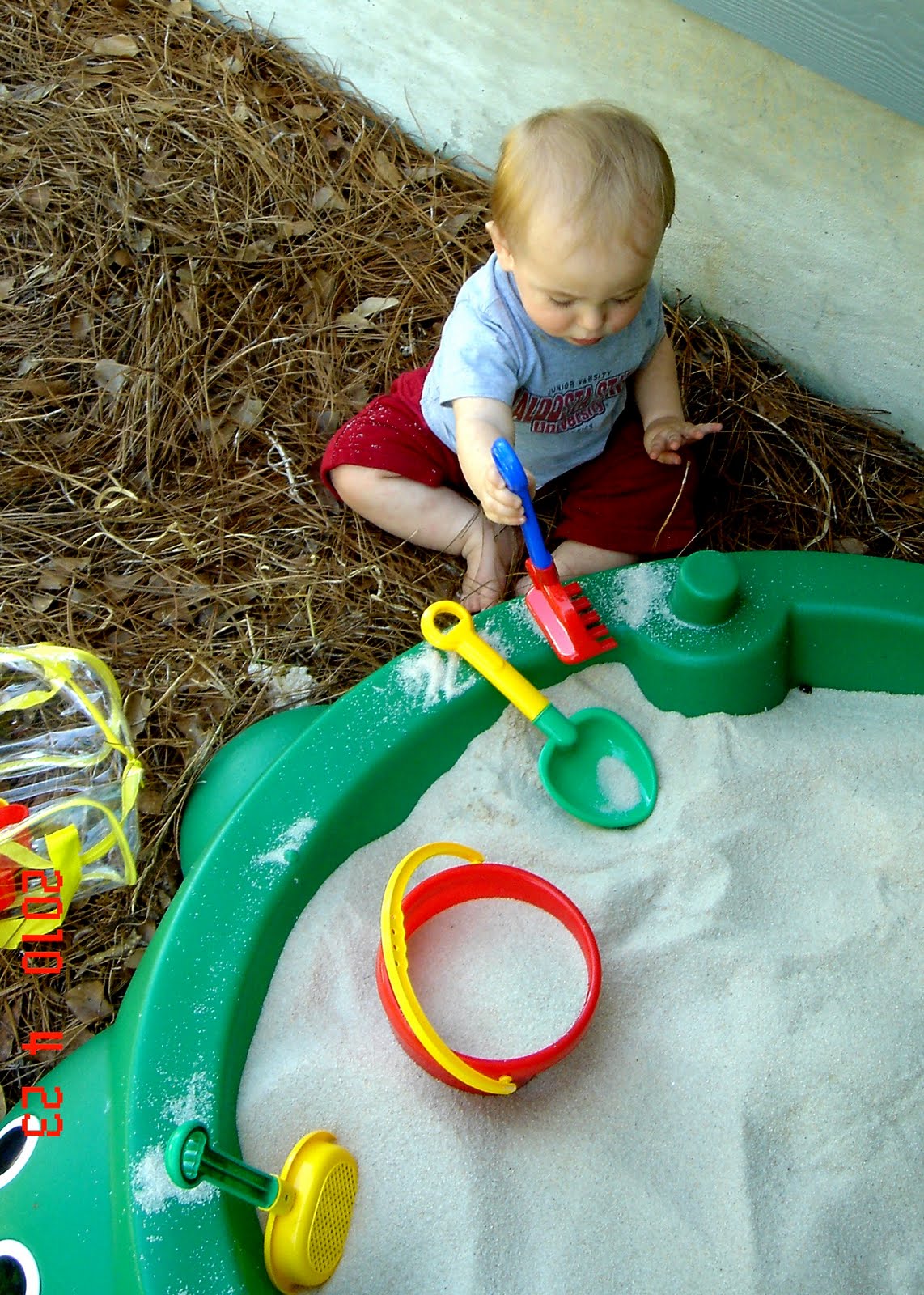 Then it was grilling time. It was his first time grilling, and he did a great job. I told him to play it cool and not smile so I guess this is his thug face. Ladies love a bad boy. 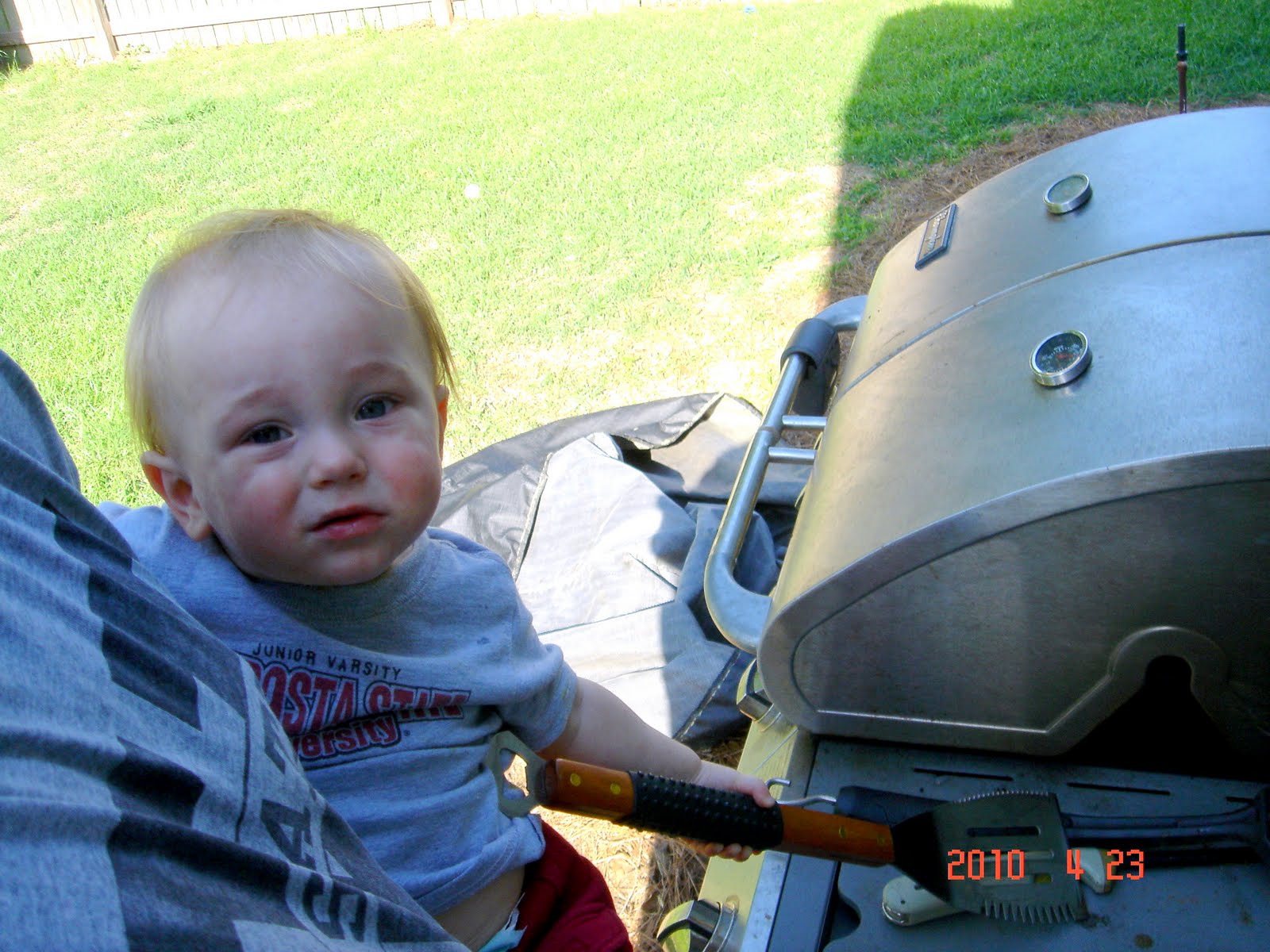 If your wondering after looking at the next picture, no I didn’t wash off the spatula after he flipped the pine straw. 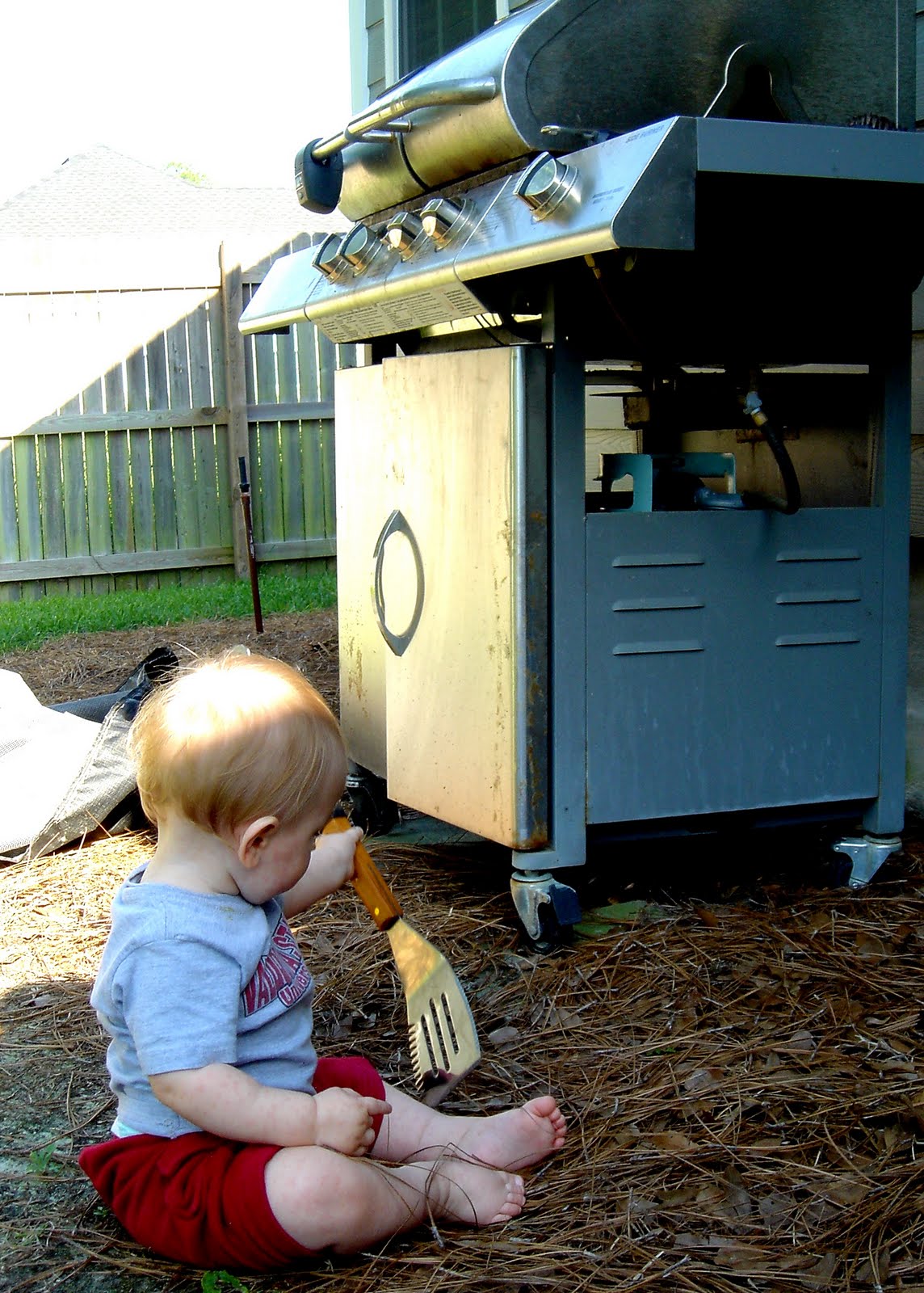 We grilled hot dogs and hamburgers and of course he loved them. Here is Kye flipping the burgers all by himself. 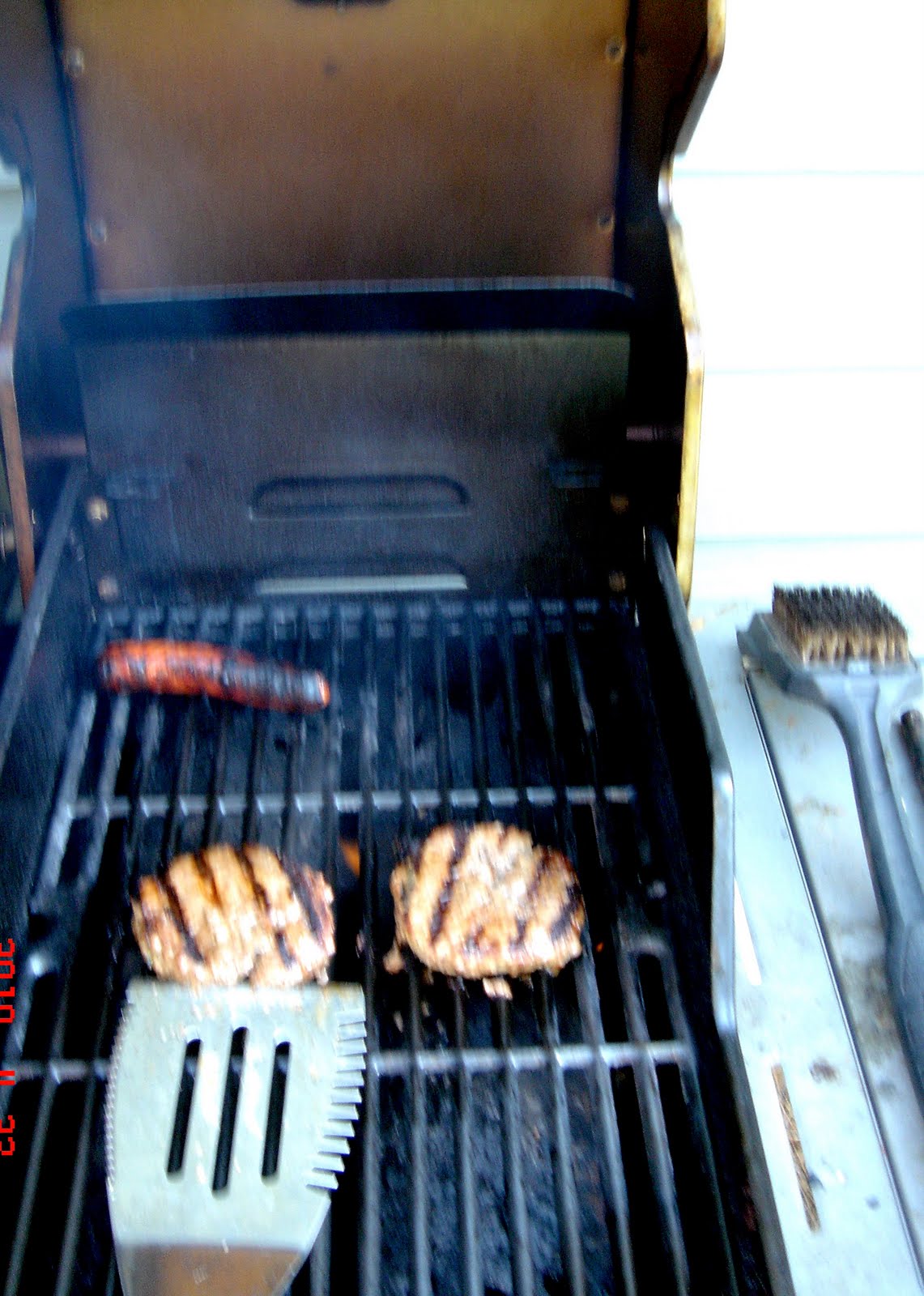 I do appreciate a little more how difficult it is to cook when he is all over the place.  Em does a great job with that because dinner is usually ready by 6 pm. After we ate there was a little time before his bath. He decided to climb up in the his rocking chair and also stand in it and rock back and forth. And I didn’t stop him, if he fell he would learn not to stand in chairs, that is how I learned. 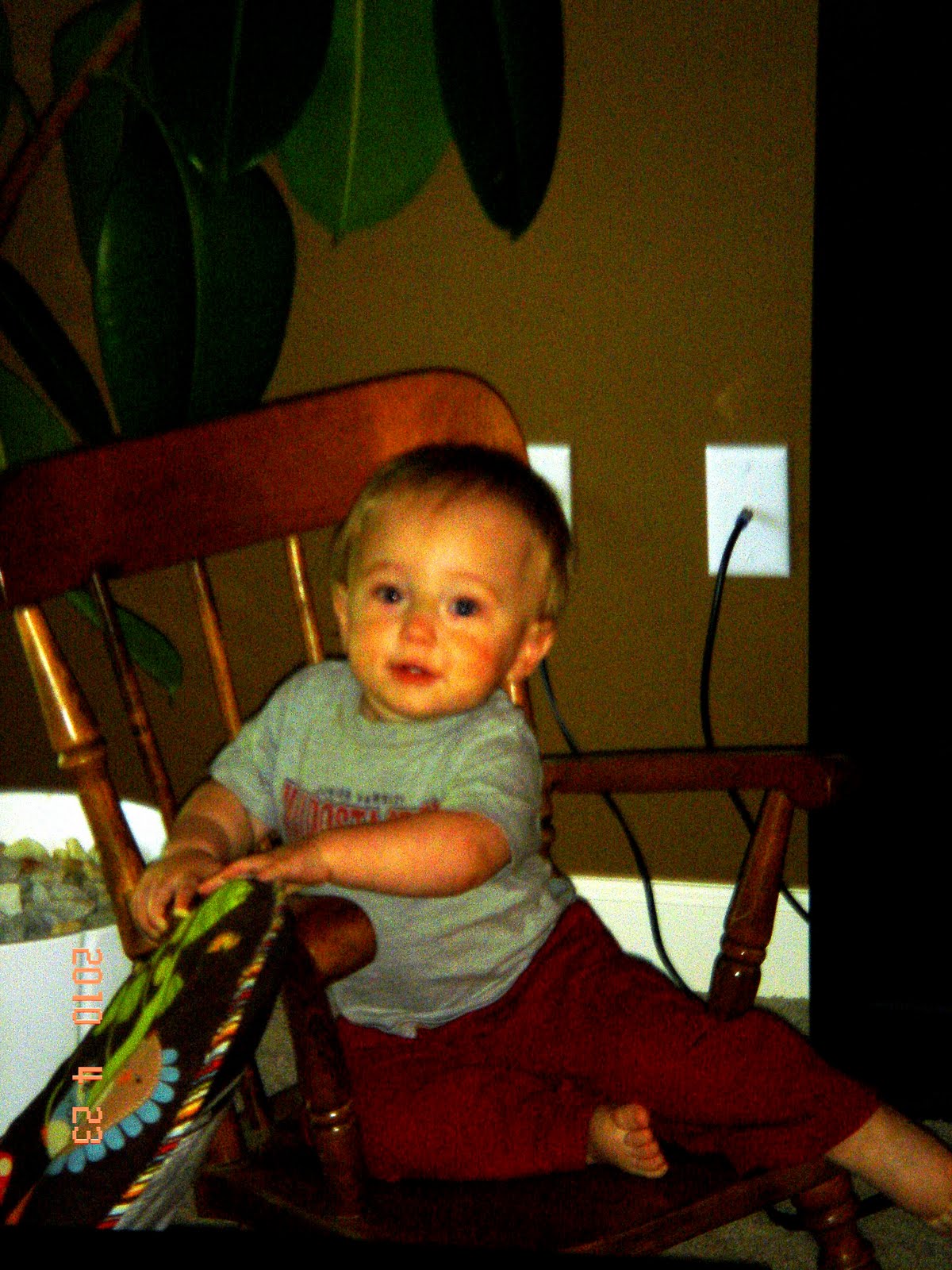 The next day he did a pretty decent job on his naps and the day was smooth overall (Mommy note: yay for Daddy sticking to the schedule!!!). We had planned on going golfing with Big Papa but the boils Kye had changed those plans. He was not supposed to be in the sun for an extended period of time. I still took him outside to “go golfing” and of course lathered him in sunscreen. Yes, I want Kye to be a manly man, but looks still count and I didn’t want the rash to scar. 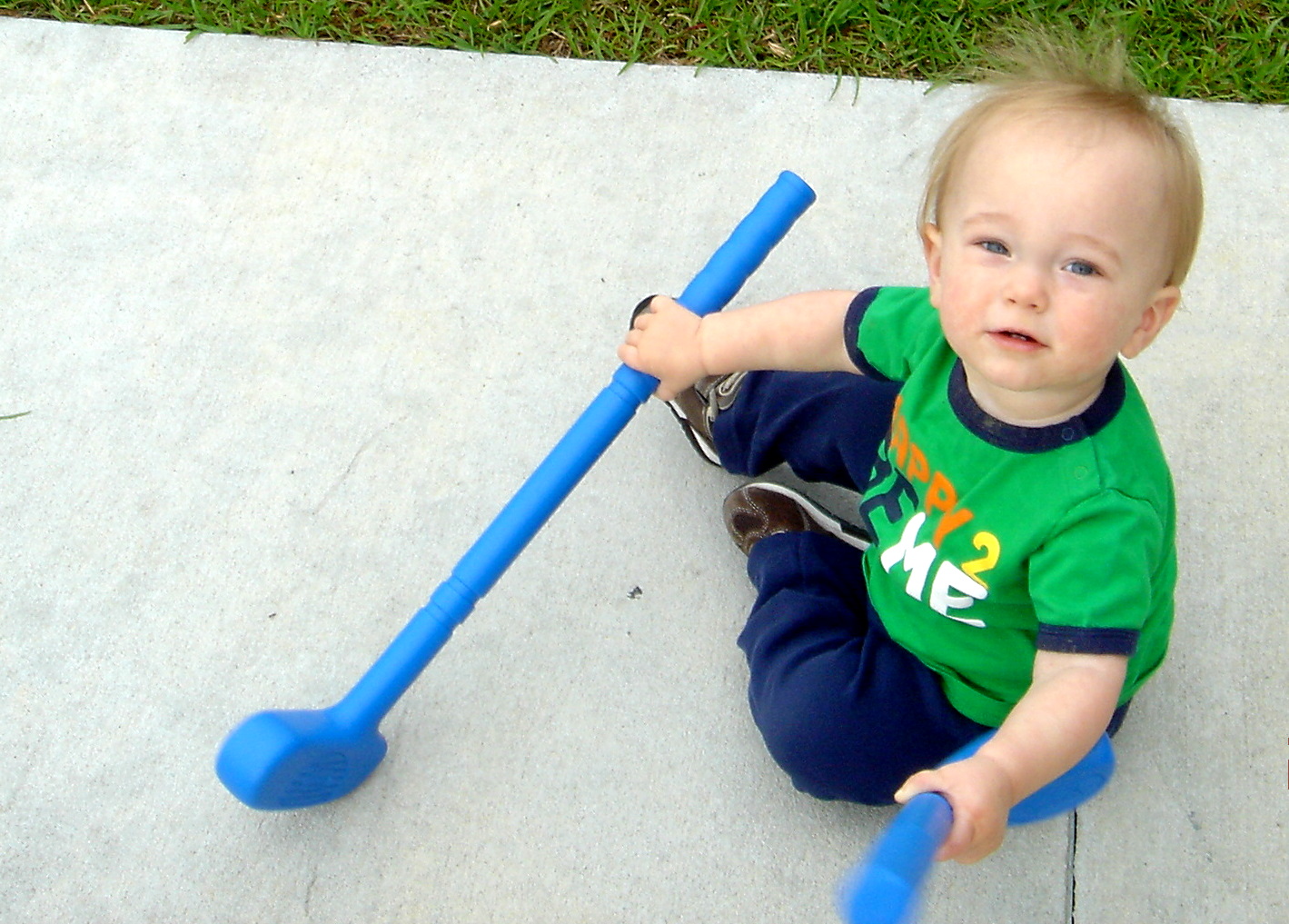 First time connecting with the golf ball. It is hard to tell, but he swung it around enough to make contact….I promise. 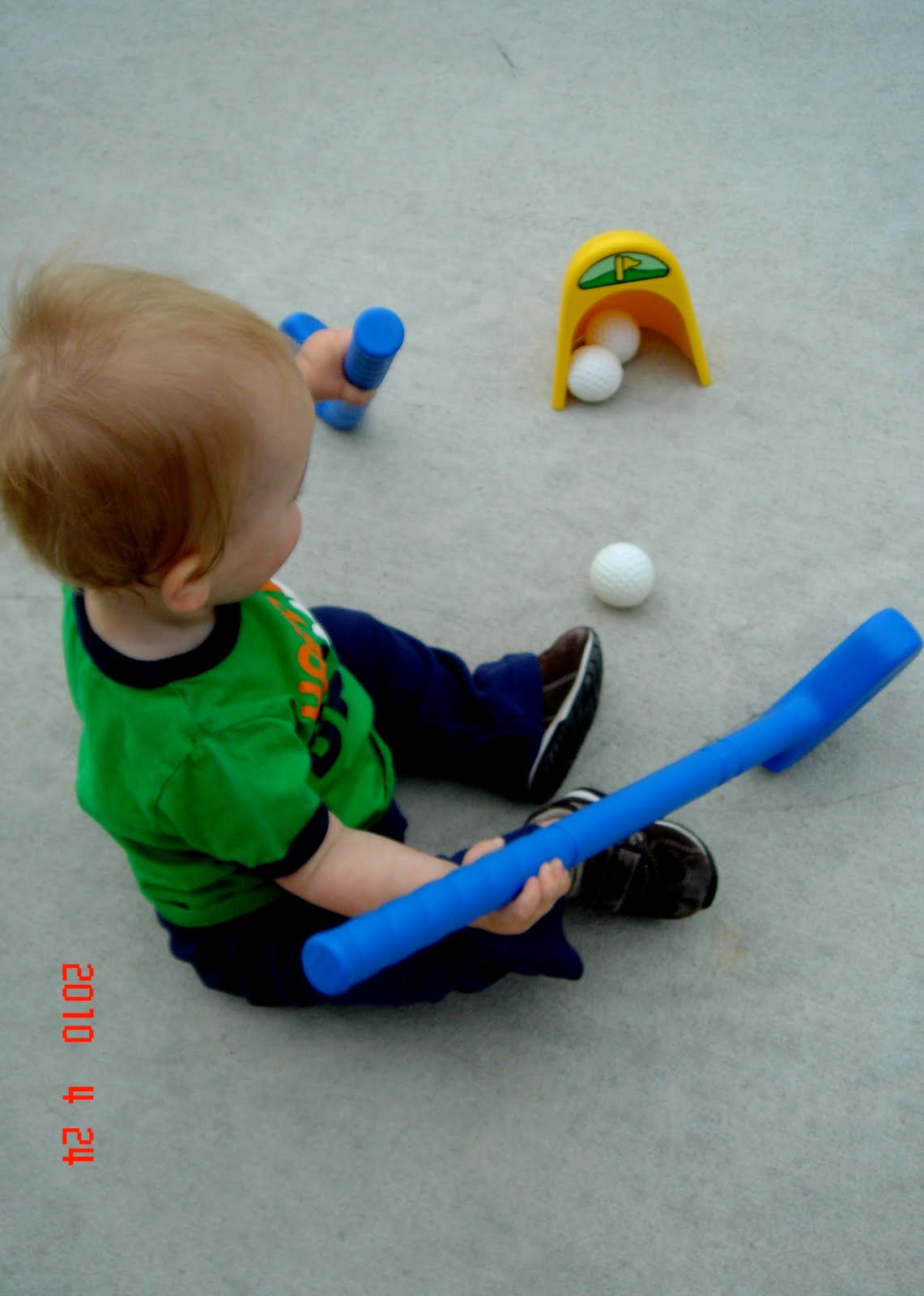 When the grass in the back yard dried enough it was time to do the manly duty of mowing. Kye played in the water table while I mowed the back yard. This did involve more sunscreen. The issue I thought I would have with mowing was the exact opposite of what I thought. My theory was that the lawn mower would scare Kye too much and I wouldn’t be able to finish the job. Instead he kept crawling towards it and I had to stop and put him back at the water table like 32,745 times. 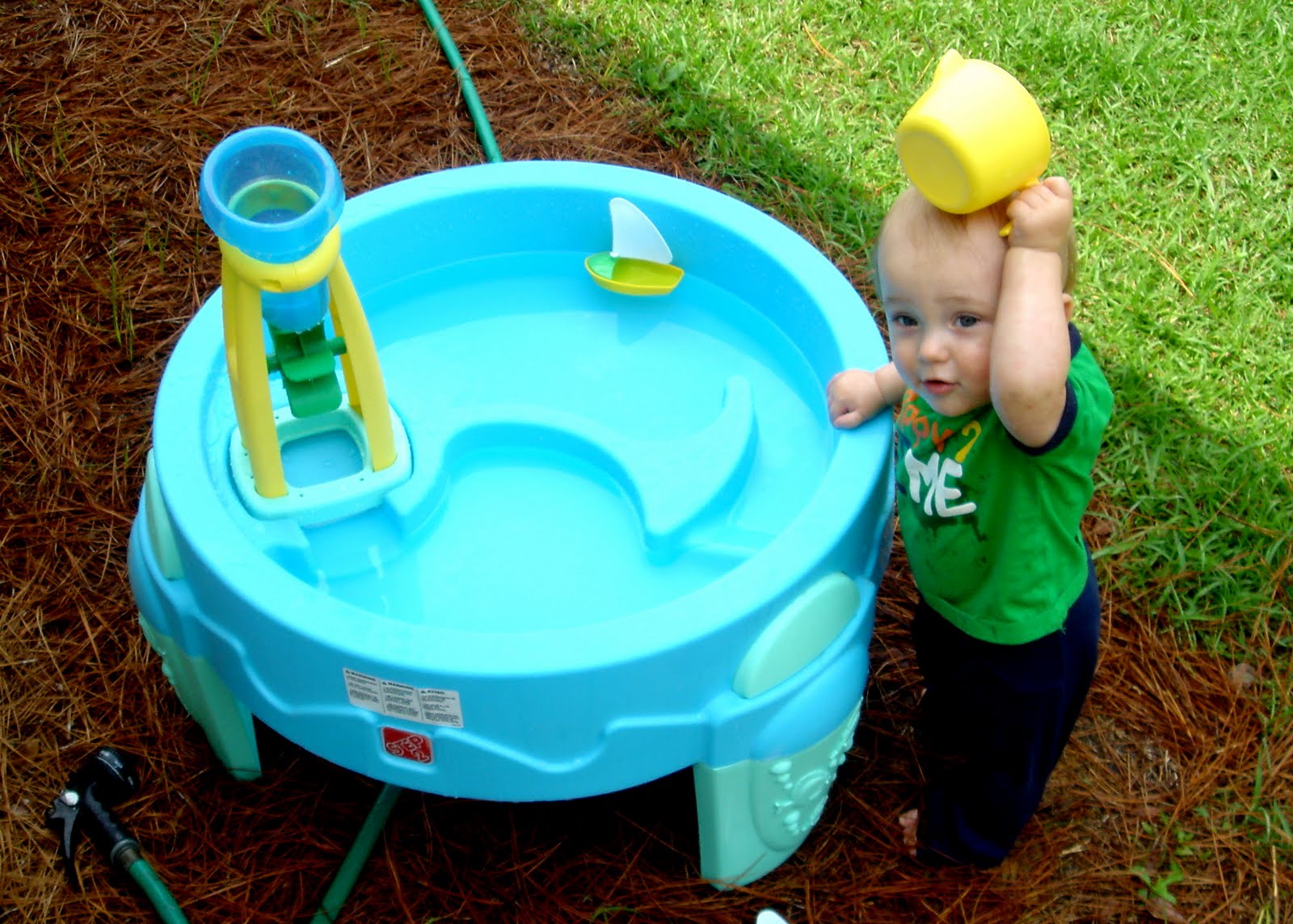 Then the most manly thing we did all weekend: BAKE! 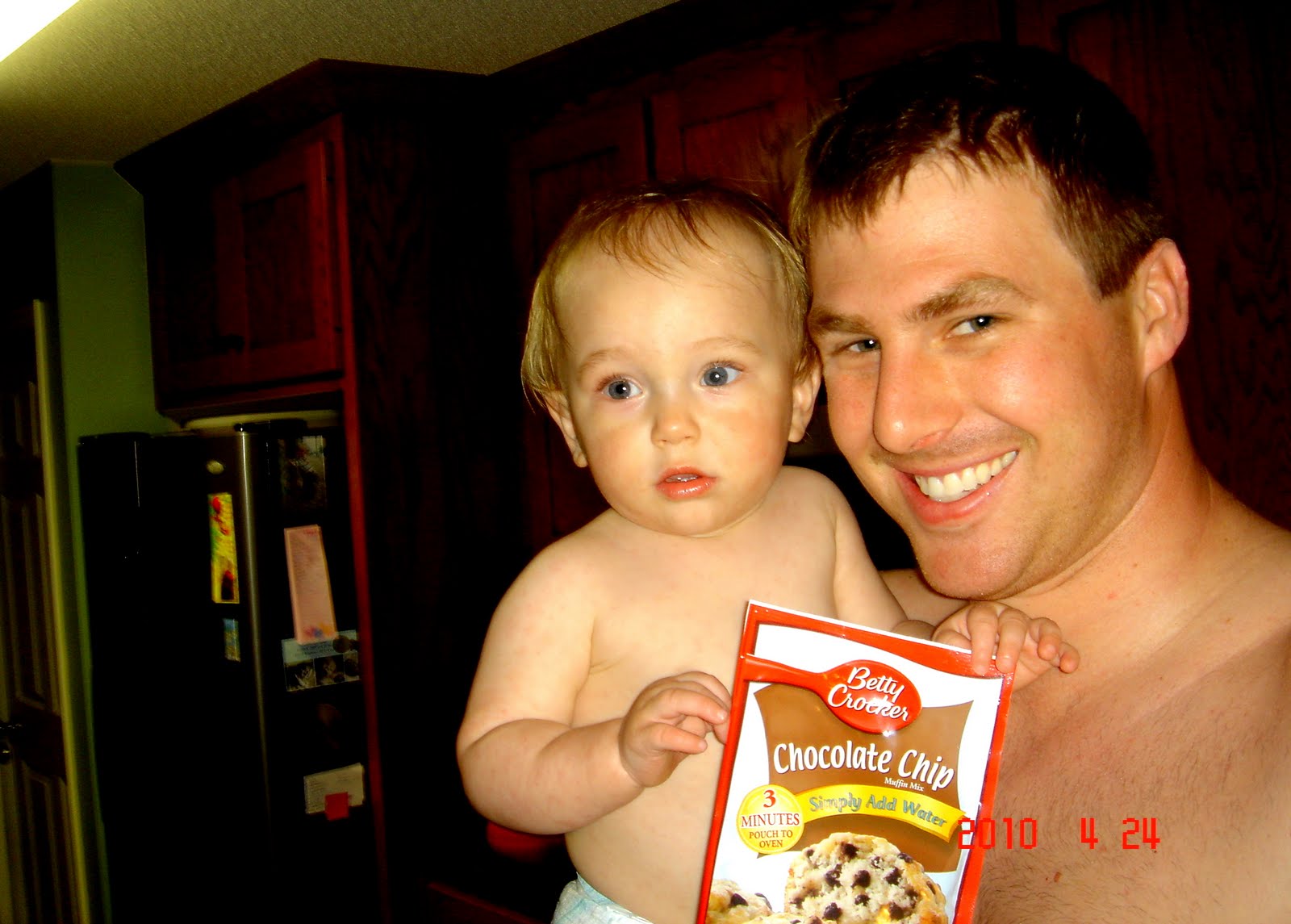 Normally I would never let Kye eat the batter, but Mommy showed that when Daddy was away she broke the rules. So I decided to do a little rule breaking myself. He REALLY liked the batter and was very angry when I took it from him. He didn’t get much just a few sucks on the spoon. 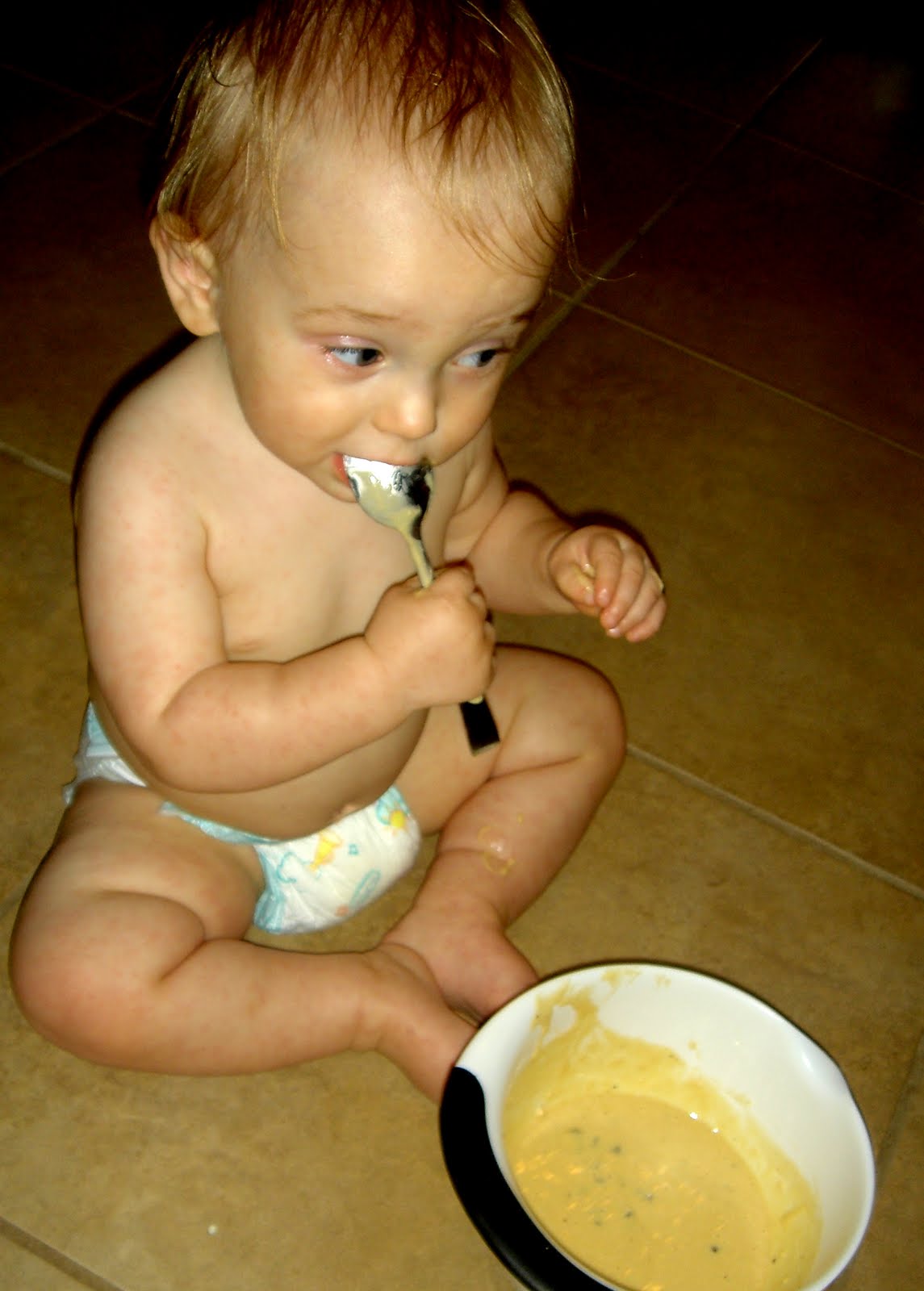 That afternoon we had a little more yard work to do. I put him in his bathing suit this time and hat. Oh yea and more sunscreen. After we played he needed to wash up some because he had grass and sand on his legs. I put him in the sink and washed him off. Lately it’s been really tough to brush his teeth but he saw the toothbrush and decided to do it himself. 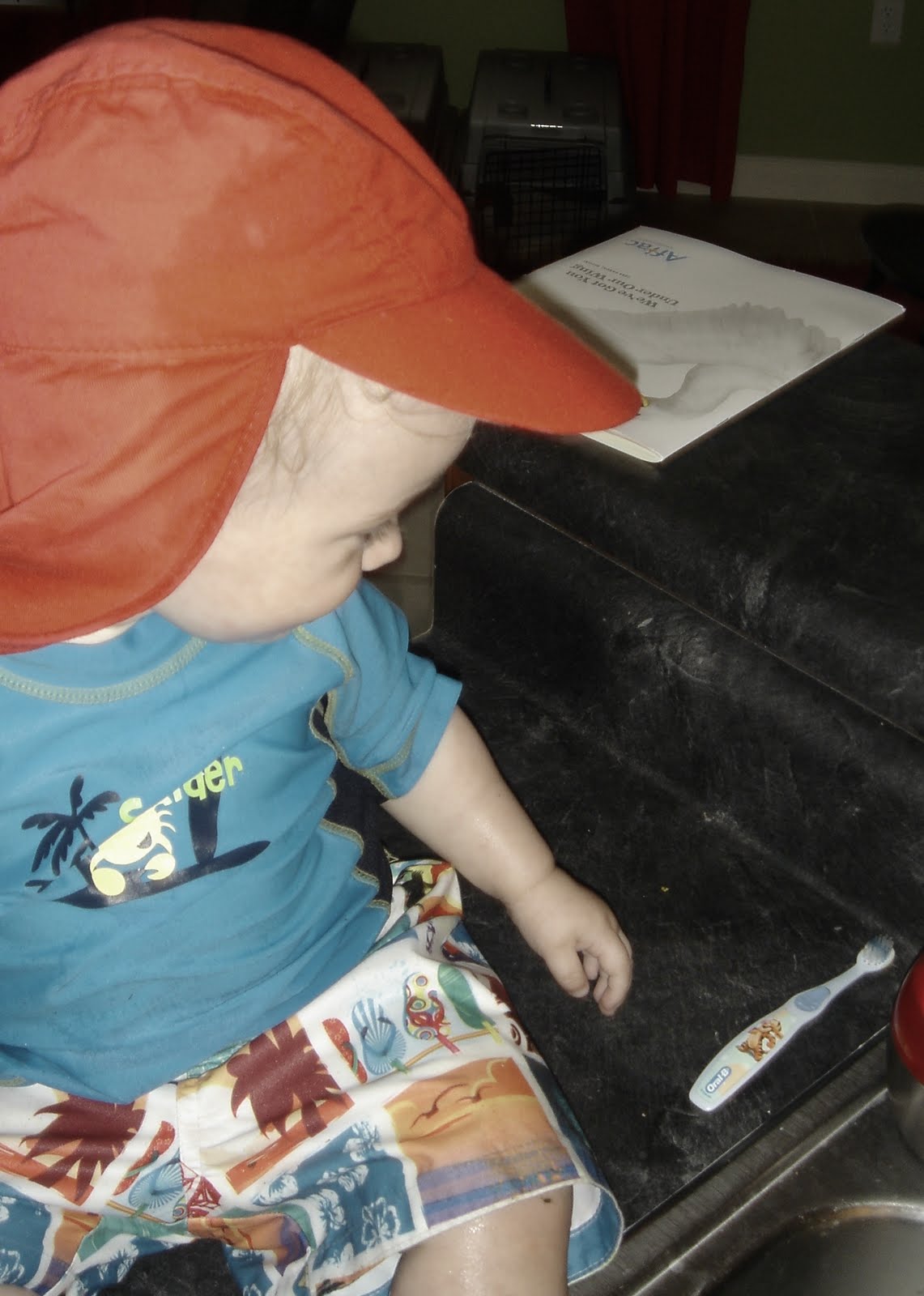 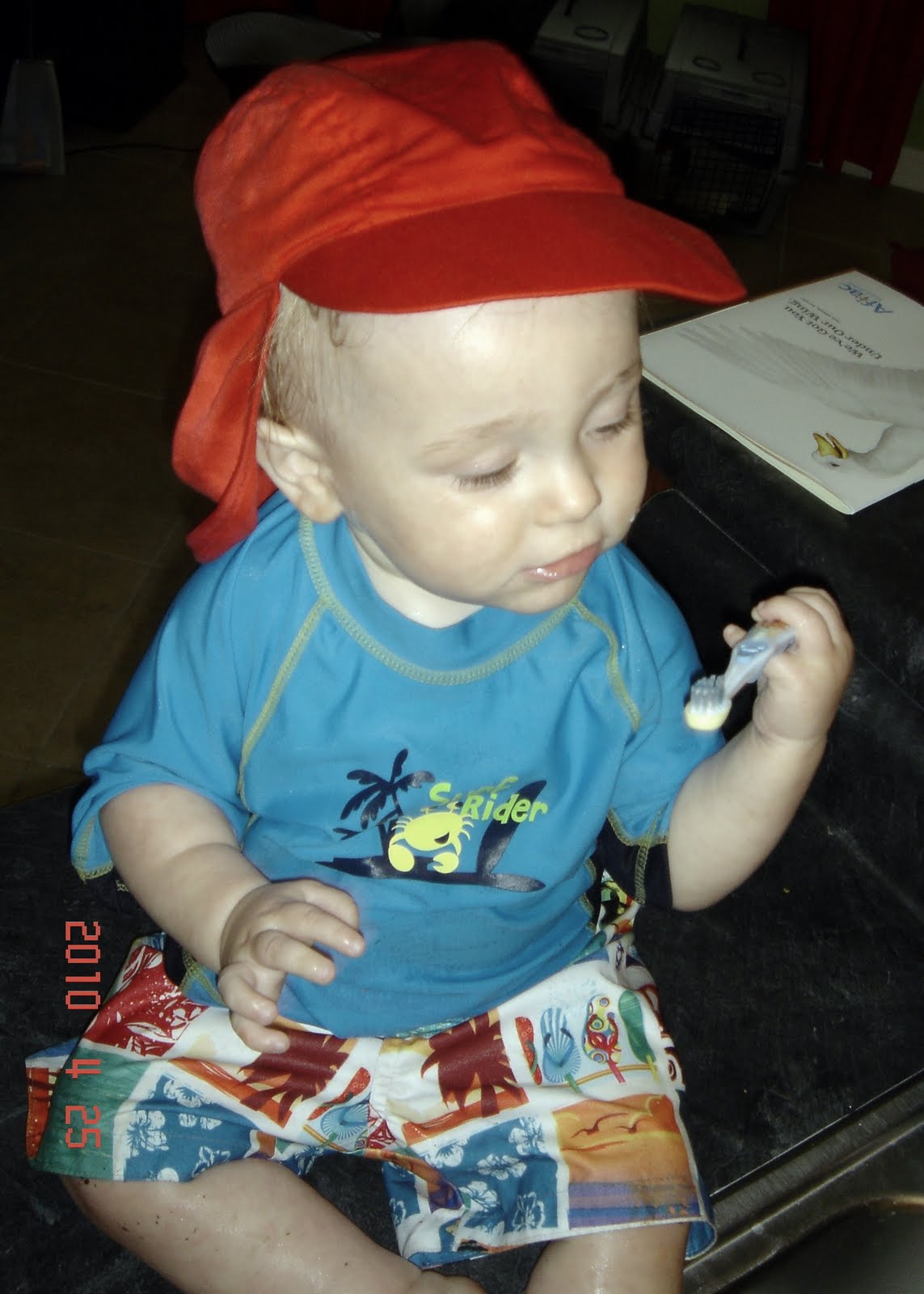 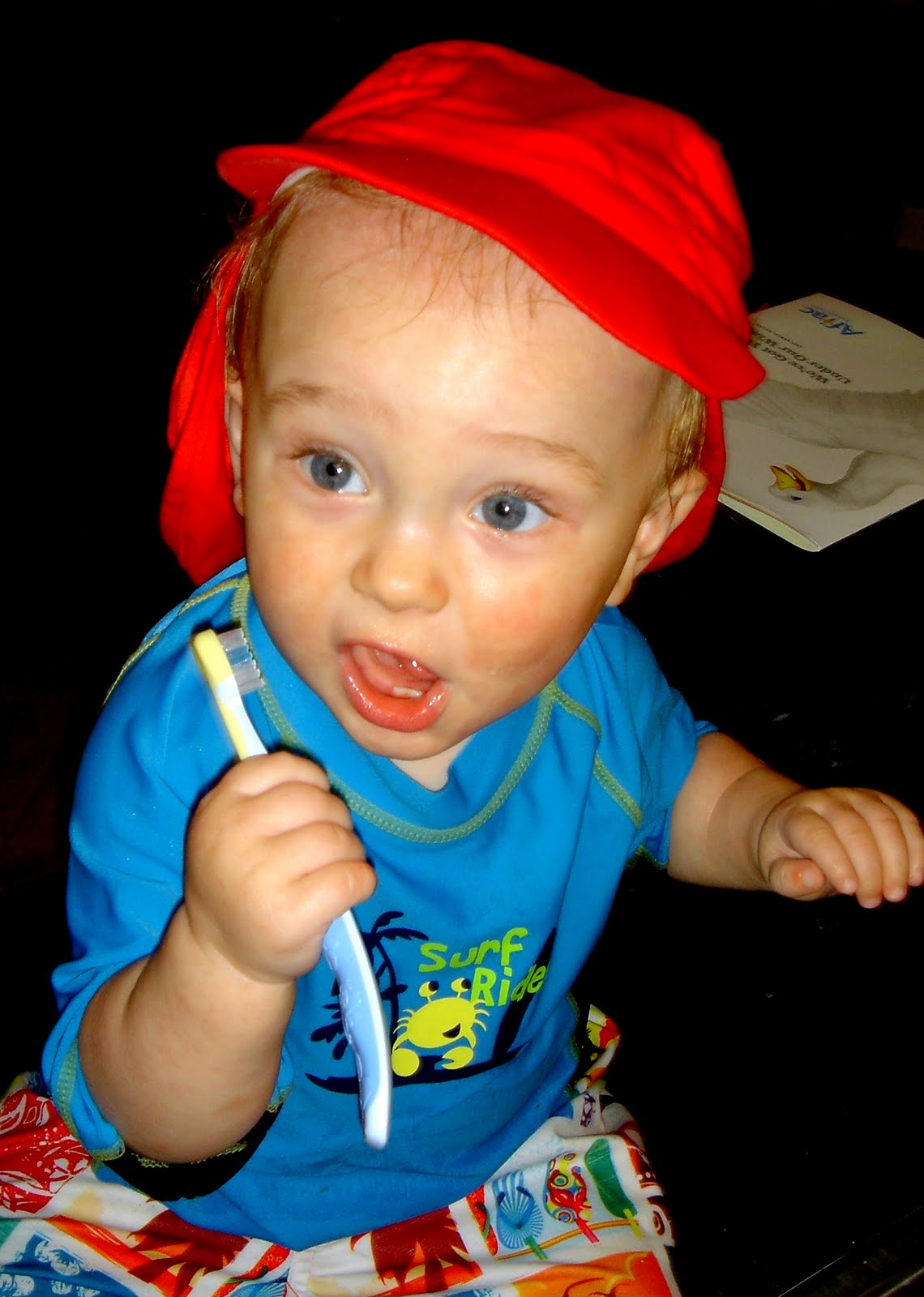 Washing off in the sink! 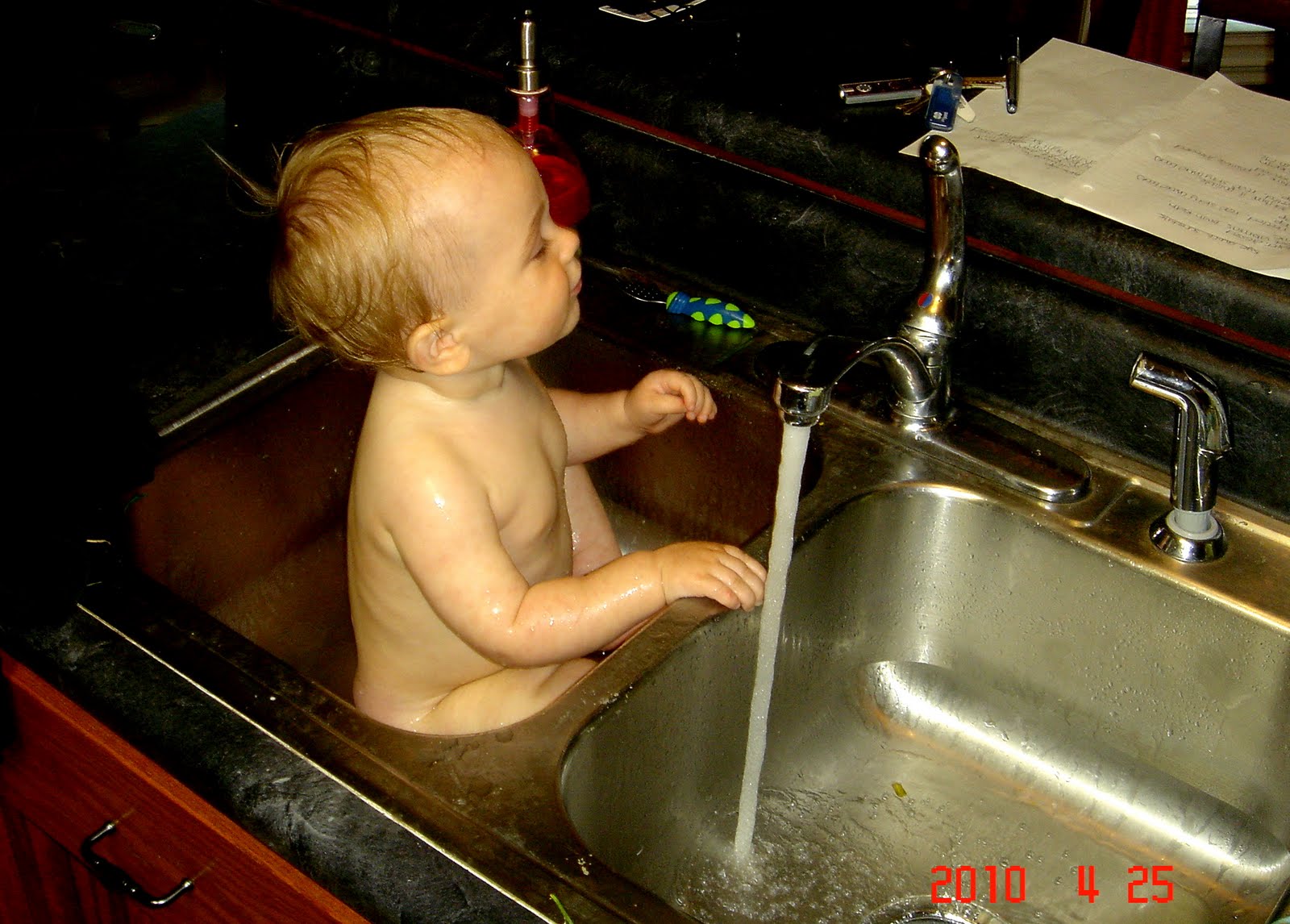 “I can’t believe daddy is letting me touch this.” 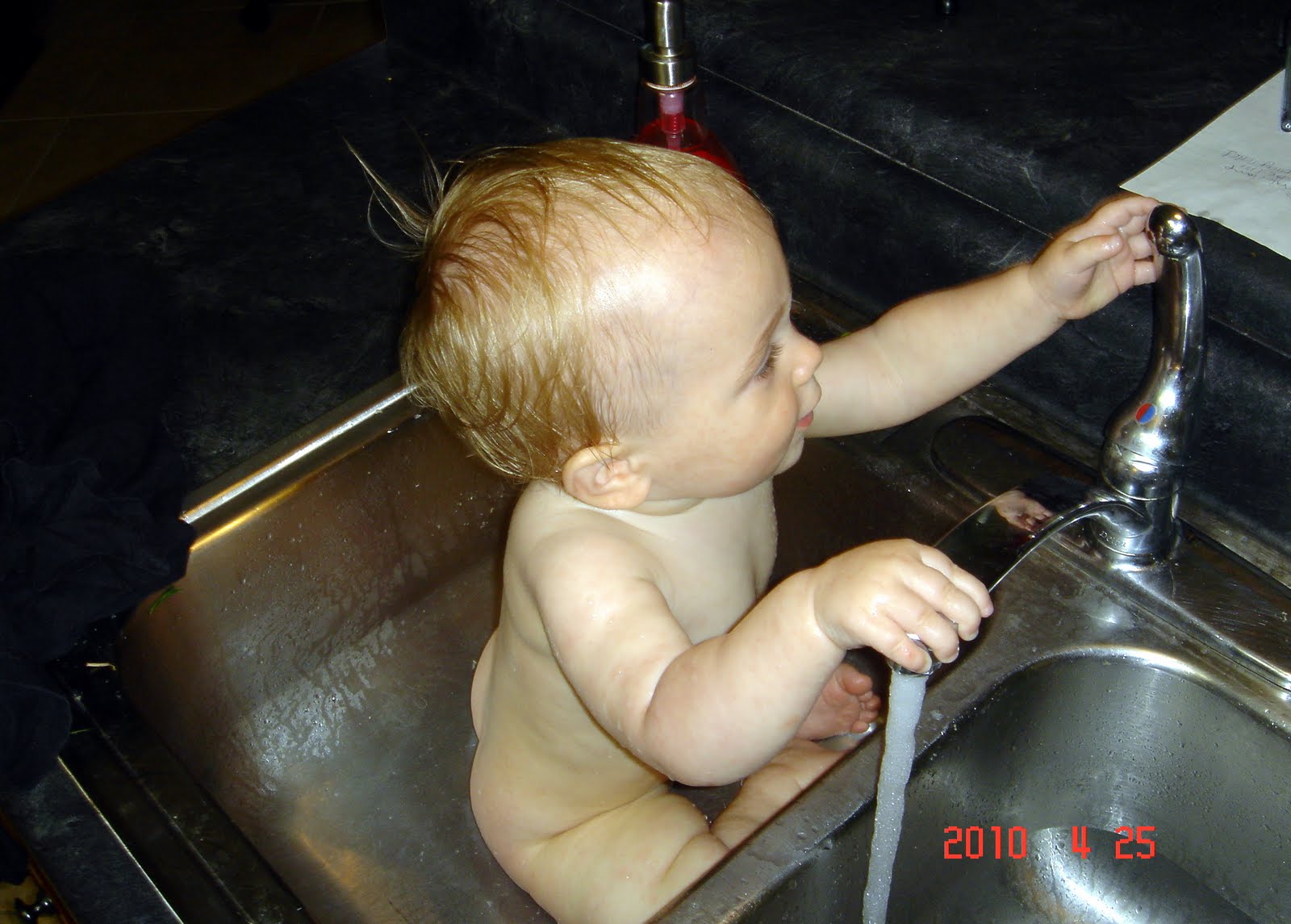 Waiting for a spanking maybe? 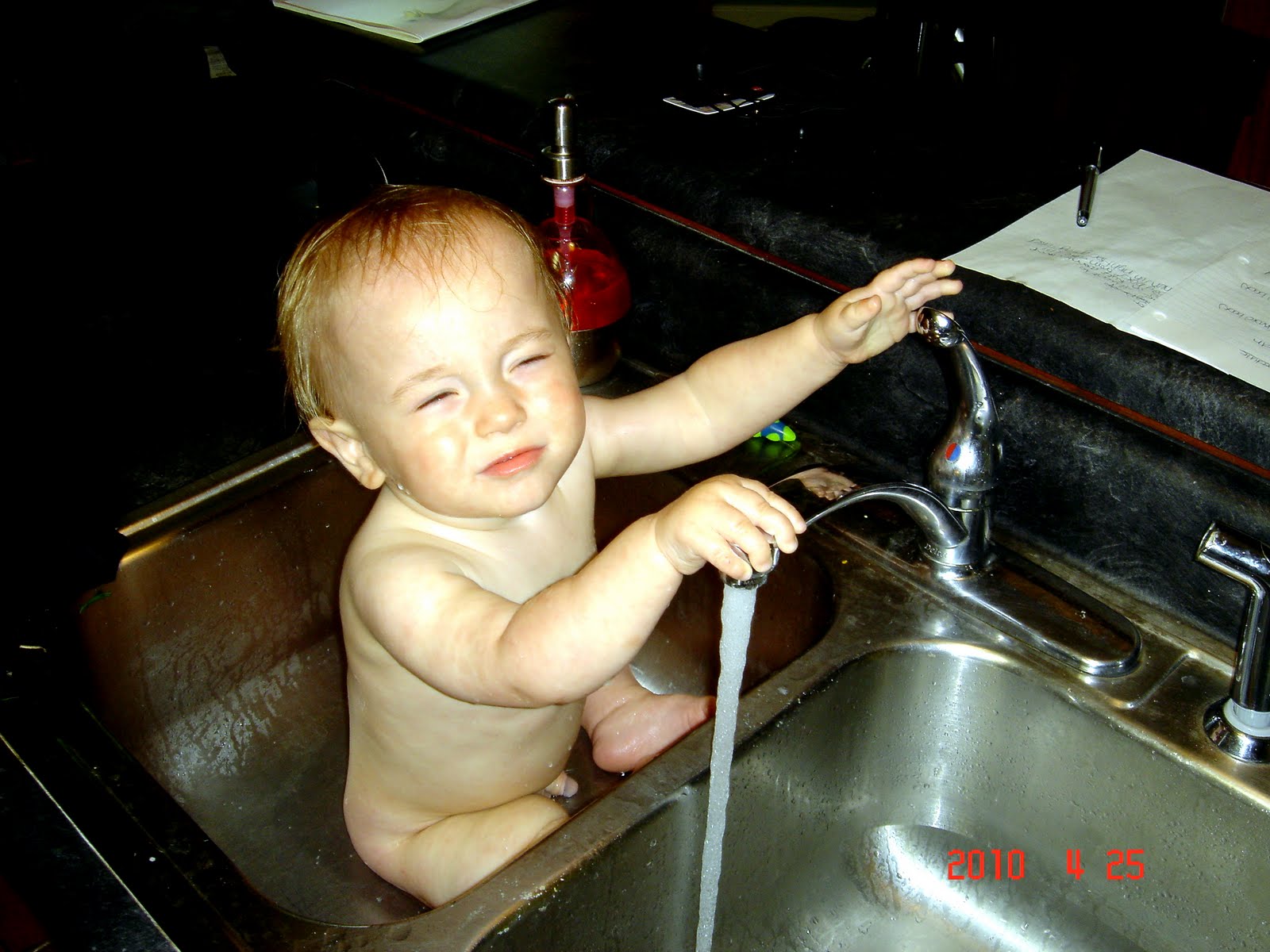 After all the work was done it was time to relax. I had the Wii hooked up to the big screen to play a little Tiger Woods Golf. Well, Kye kept trying to grab the Wii remote off the coffee table. This gave me an Idea. He has never played Nintendo before, why not now? I went and got an old Game Cube remote and he for real thought he was really playing. We only played one hole but it was still his first time. 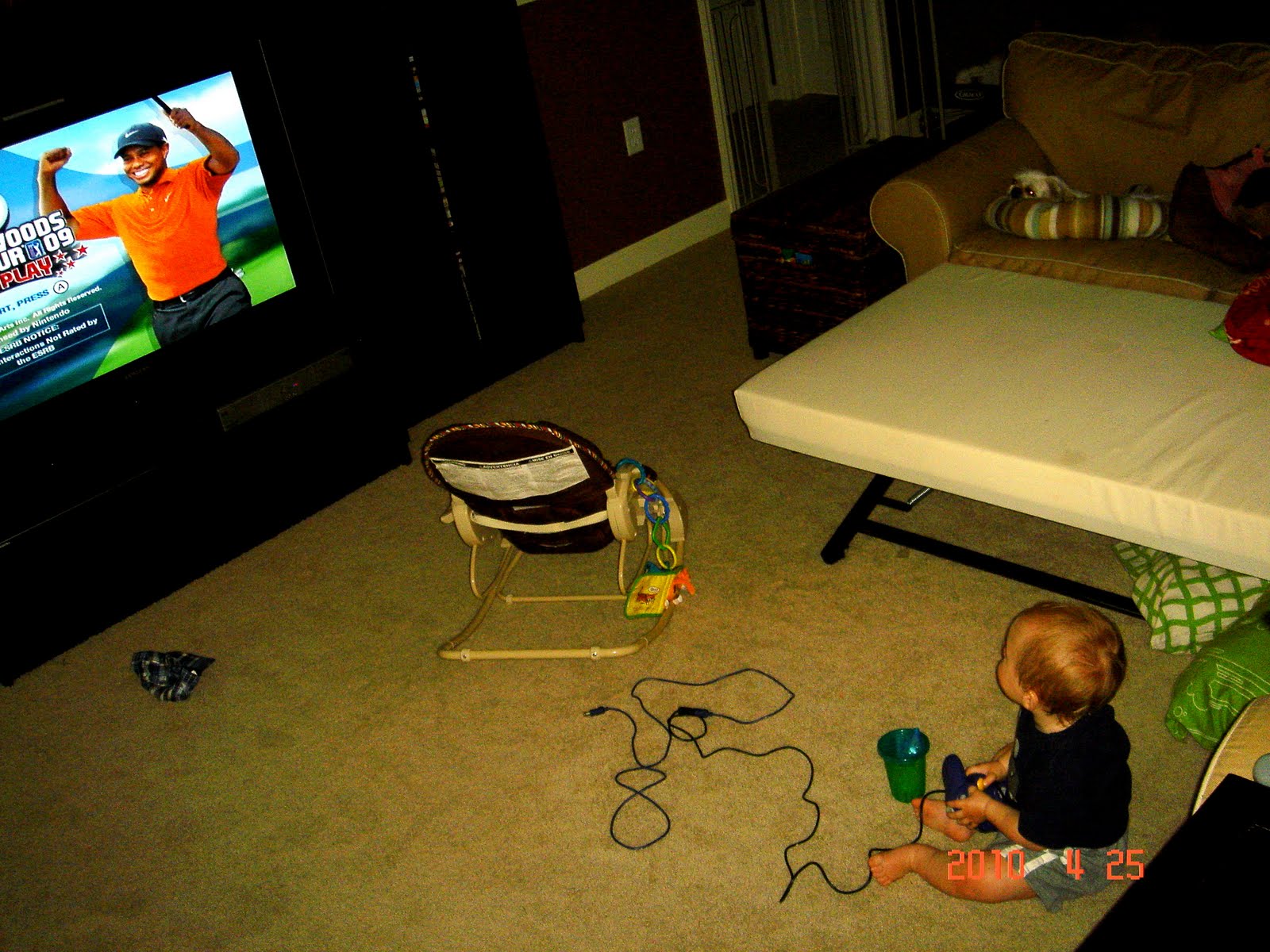 We closed out the weekend with him asking for more milk before bedtime. I am sure that Em has written a blog on his growth spurt (Mommy note: nope, not yet anyway haha). So he finished his extra milk while we watch some sports. Then it was off to bed. 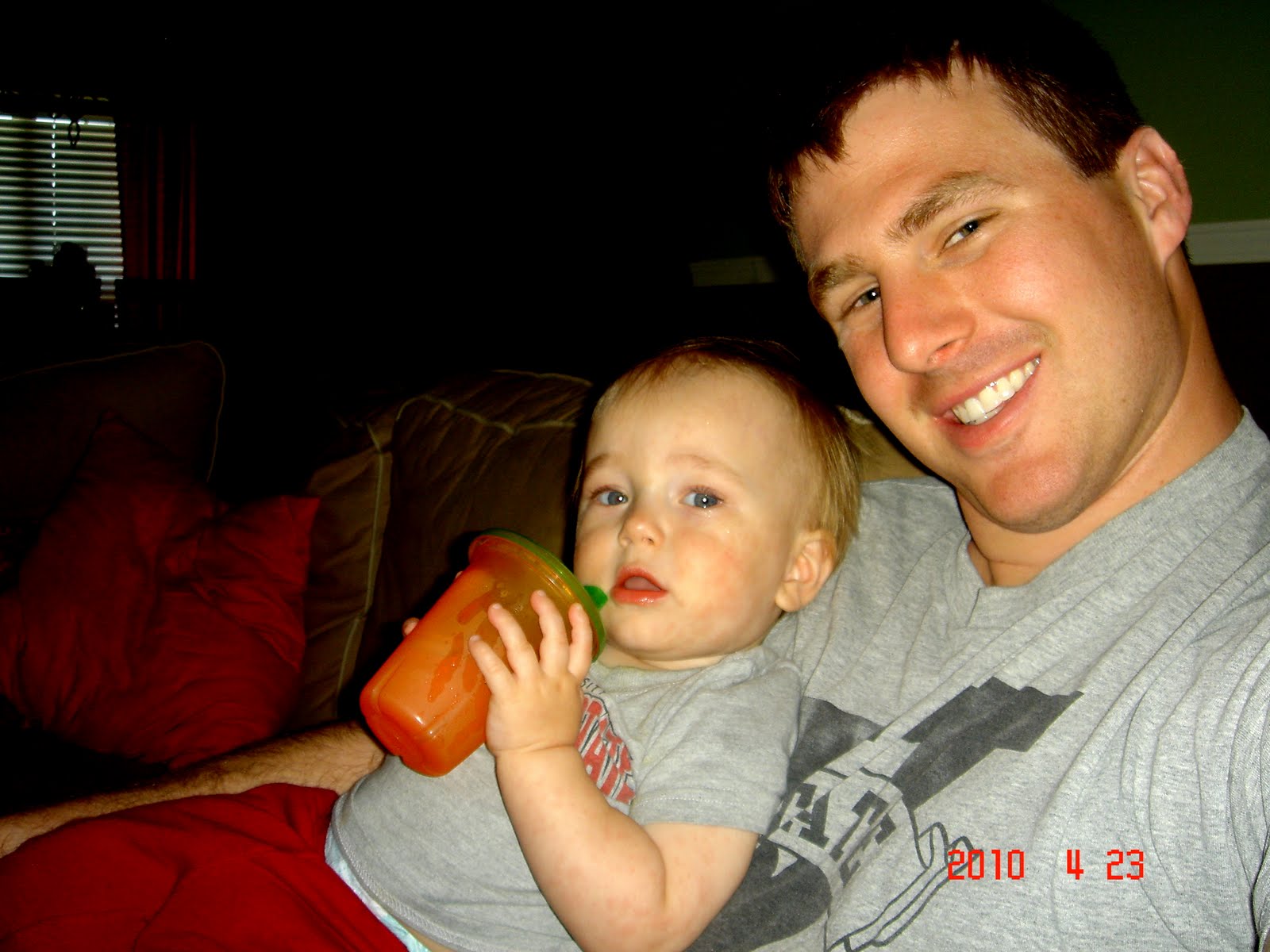 I was very grateful to see Mommy come back home Sunday night. I missed her a lot and obviously having her back to help was great. Saying that, I really did enjoy the man weekend and wouldn’t mind doing it again. Even though we couldn’t go anywhere because of the rash, we still had fun. I hope Kye had as much fun with me as I did with him. I LOVE being a daddy.