It seems like just recently all my favorite books have been turned into movies. I’ve re-read each book before the movie comes out and await eagerly to go to the theater. Why do I continue to do this when I’m always disappointed? Zach was never a big reader and when I’d tell him how good a book was he’d say “I don’t want to read it because I don’t want to ruin the movie.” While that sounds kinda backwards, it is also true. If you only see the movie then you may like it. If you have read the book and THEN see the movie, you will probably be disappointed. I even think when you see the movie first, THEN read the book you still enjoy the book more.

Here are the recent books-to-movies I’ve seen and my thoughts on them:

Harry Potter Series: I never read the books. Everyone says they are much better than the movies and I guess I should read them? I didn’t like the movies though so it doesn’t inspire me to read the books! I thought the movies were too long, boring, and too much “action” without enough story. I’m not an action fan (shocker)!

Twilight: SUCH a great book. The best book of the saga for SURE. Movie was awful. Like so bad it was funny awful. They actually did a pretty decent job of following the book, I just didn’t like the casting and I felt like it was almost made to poke fun at the book. I also thought it was cheaply made and it bothers me how the vampires flew and how they looked in the sunlight. It was also annoying at how bad the acting was (Jasper and Charley especially)

New Moon: This is probably the only movie I can think of that was BETTER than the book. I couldn’t stand New Moon the book. SO boring. So drawn out. It was the worst one of the saga to me. The movie people had a lot more money after the success of the first one and you could tell. Better graphics for sure! Also a better director because this time the vampires didn’t fly 🙂 Charley still gave me the creeps (he so child-molesterish) but overall it was a pretty decent movie! Of course I’d like more sexual tension between Edward and Bella but whatever!

Angels and Demons:  I read Divinci Code after seeing the movie and fell in love with Dan Brown books! He’s an awesome author and does such a good job of teaching true history mixed within a fun, fast-paced story. The movies? All they include is the action. Zach was annoyed that we went to rent them and they were in the action section of the rental store! I read Angels and Demons before seeing the movie and the movie was a typical blockbuster type film. In my head while reading I always pictured our friend Ryan Cooper as the main character (he’s a history type guy and would make a wonderful professor!) and I enjoyed that image more than one of Tom Hanks. However, I thought Tom Hanks in the role was wonderful! I just wish they had spent more time developing the plot instead of just jumping to the action!

My Sister’s Keeper: I’m adding this one after my original post when I saw my comments from Lindsay (as I totally agree with you!). I LOVED this book and I read it after I heard about the movie coming out. I was pumped to see the movie as the book was so incredibly moving. The movie was terrible. They totally changed the ending!!! How can you do that?!?! Like changed the ending in a way that it made the book not even make sense. Ugh it made me SO mad. So so so mad. I cried very hard while reading the book. I felt so sorry for the family and could easily put myself in the mom’s shoes (so strange now to be relating to the parents and not the teenage characters!). When I saw the movie I did NOT cry one bit and instead felt so much anger that hollywood had to put a spin on it. It’s a BEST SELLING BOOK! Why change it?

Confessions of a Shopaholic: I thought this one had promise. I love Isla Fisher and it was by a big name producer! But it was AWFUL. Worst book-to-movie by far. They had her in AMERICA and the whole book she lived in England! So stupid. I watched it with Ashley and we actually almost just shut it off. I was so sad that it was so bad because it was such a great book. I love the whole series of them and really relate to the character but the movie made her seem so stupid and the love story so pushed and fake.

I decided to write this post because Lovely Bones just came out to theaters. I read the book a couple years ago when I flew on my own to Michigan for my family reunion. I started it on the ride over and finished it on the way back. I BAWLED my head off in front of everyone. It then became my favorite book ever (and I’ve read quite a few books so that’s a pretty big honor!). I’ve heard buzz about the movie for quite sometime now and I couldn’t wait to see it. It had big name actors: Susan Sarandon, Mark Wahlberg and more. And it was directed by an academy award winning director (Peter Jackson). Sure, I couldn’t stand Lord of the Rings (which Jackson also directed) but I still had high hopes. 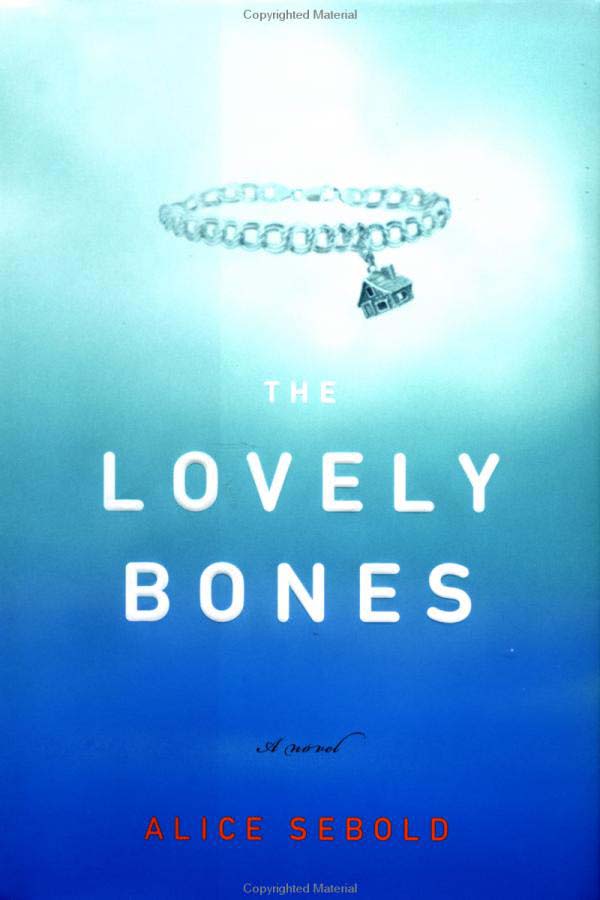 Was it my favorite movie of all times? No. (That honor still goes to Memento!) But it was decent. I thought the casting was RIGHT ON. The girl who played the main character was perfect. Susan Sarandon was flawless. Even the lady that played the mom was great. The book isn’t so much about death as it is about life. It covers a great span of time and tells many mini-stories that are all equally important to the plot. I felt like the director used his time for the movie (about 2 hours) to focus on the wrong things. Instead of trying to tell as much of the story as possible, he tried to show as many cool effects as possible. The “Heaven” scenes were so boring! I could have fallen asleep. He also just decided to skip around in time and not tell us the amount of time that had passed. In some scenes you felt like the death had just occurred, in others it seemed like it had been 10 years.

It did included most of the main story though and even many of the direct lines from the book. I was thankful for that even though I really don’t have a desire to see it again (whereas I’ve already read the book twice and will probably again in the future). Zach is probably just going to read the book and not bother with the movie. If you’ve never read the book, you may enjoy the movie. And if you haven’t read the book in a long time, you may also enjoy it. It wasn’t the worst book-to-movie ever that’s for sure! If the “Heaven” scenes had been cropped out and the time would have been better explained I honestly think it could be one of the best!

I think the main issue with books made to movies is that books have more time. They can tell details and history and back story and character development that a movie just doesn’t have time to do. I know they never compare but I’m sure I’ll still be seeing all the movies that come out from books I enjoy (Eclipse is next!).

SO FUNNY: I just wrote this post (literally!!!) and went to check my email and saw a news blurb pop up that they are making What to Expect When You’re Expecting into a movie too!!! How is that even possible? This is one where the movie will probably be better than the book as the book is a reference manual!!! Dang they’ll make a movie out of ANYTHING now won’t they????