I’m VERY blessed with a husband who will gladly keep the kids so I can run errands. Once a month we work it out where I go get groceries in the evening after he’s home from work. Typically if I have other errands to run I’ll do them on Sunday afternoons while the kids are napping. But, on occasion, I do take the kids with me.

I ENJOY running errands alone. I like blasting some of my old school songs and having my thoughts to myself for the drive there. I like taking my time and browsing the shelves without having to rush back for a nap or meal time or something.

However, I also think it’s important to take the kids with me often enough that they will know how to behave in public. If they are always at home with Zach when I go out and about, how will they learn what behavior is expected of them? Just like eating out…we don’t eat out often but we try to do it enough where our kids have the opportunity to learn what’s appropriate when out to eat and what’s not acceptable.

With it being summer I took the kids down to Lake Park (like a 25 min drive or so from us) to go into one store. It’s important when running errands not to do too many at one time. Kids don’t like having to get in and out of the car a bunch of times and I feel it’s a better experience for all of us if I limit the errands we run.

Carter’s was the PERFECT store to take them to. I knew going in that they had a lego table set up for them to be able to play. And it’s a SMALL store where I didn’t have to mess with a stroller and everything and could instead let them “be free.” It also has an easily accessible bathroom for Britt 🙂

When I got there I showed the kids the lego table and Kye literally NEVER moved from his seat. He sat there quietly the entire time I was in the store and played so well. He shared nicely with a little girl who came in with her mom. He even didn’t get upset when Britt knocked over his towers and just calmly rebuilt them. And when it was time to leave? He cleaned up all the legos, even the ones the other little girl had left behind, and didn’t have to be told more than once to do so. I LOVE this age he’s in. Truly, our hard work has paid off with him!!! 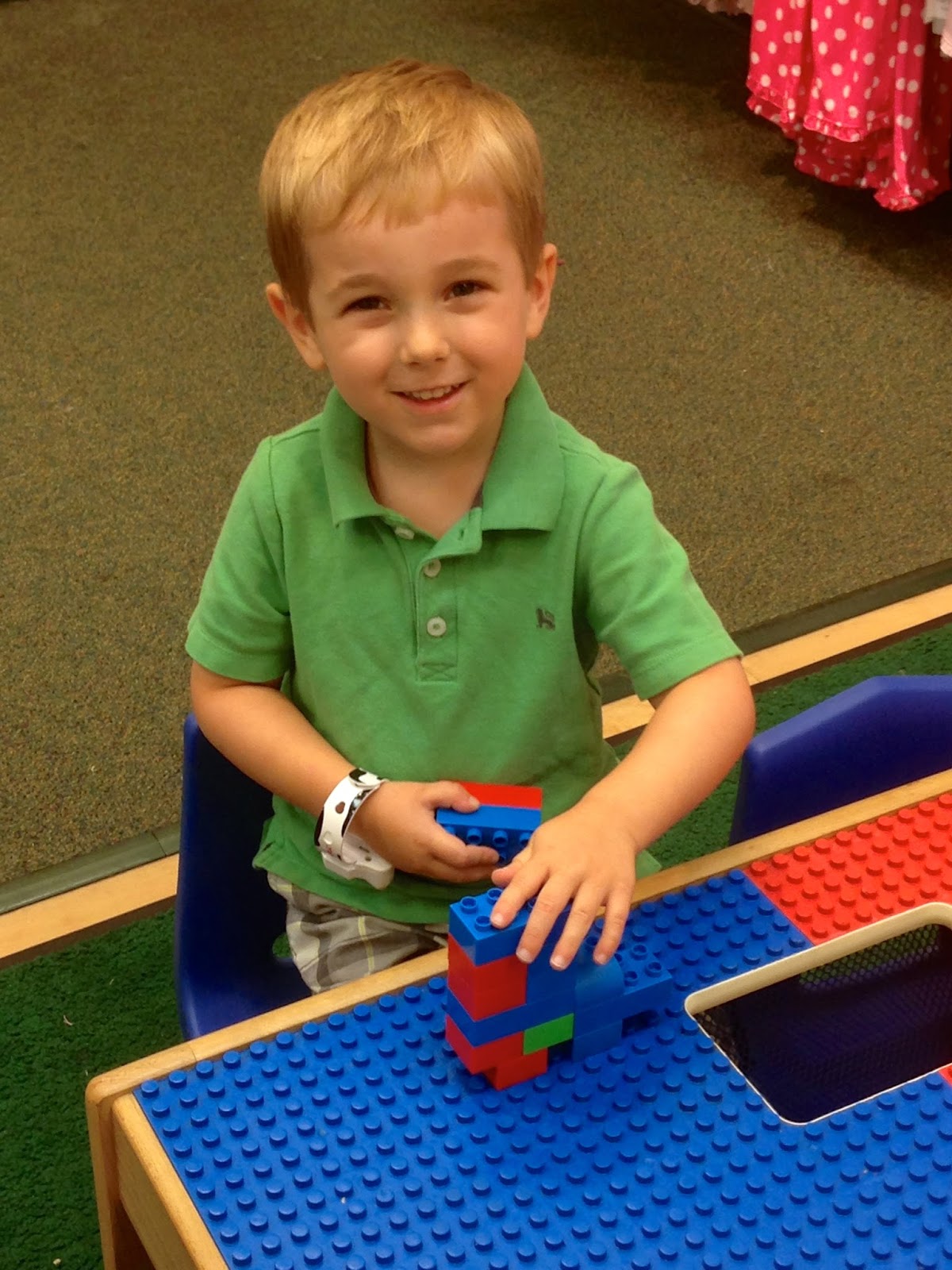 Britt, on the other hand, had NO interest in the legos. She’s a little too young for that type of thing and was more interested in going around the store and checking everything out. I’ve been working with her a lot on physical boundaries but this was a tough situation for me because I had to choose to either have her with me or try to make her stay in a toy area she didn’t really have any desire to play with. I opted to let her shop with me. She is in a tough stage right now. She’s testing her limits with us and will have those lovely toddler tantrums from time to time.

Even though she didn’t sit and play quietly with her brother, I was still proud of her behavior. She didn’t touch ANYTHING which is a big deal for her! When I’ve taken her places in the past that’s been an issue she has had to get spankings for. On this day though, she didn’t touch a single thing! She would run back and forth between Kye and I some, but being in that small of a setting it wasn’t a distraction for anyone. She even helped me pick out some clothes for her which shocked me!!! I was looking at a dress and she said “no no no” so I asked her about a different outfit and she said “yes!” (her version of “yes” which is actually the sound of a dog panting…totally random!).

I enjoyed having a shopping partner with me! Kye did so well that I honestly could have forgotten he was there and Britt participated with the experience which made it really fun 🙂 When we went to check out, the cashier told me that they were so well behaved and she was very impressed with how polite they were and how she sees SO many toddlers Britt’s age who are taring everything apart and it’s nice to see kids behave so well. I felt a bit frazzled having them both with me like that (even with their good behavior it still takes WAY longer to get anything done with kids in tow!) so it was such a relief to hear such kind words 🙂 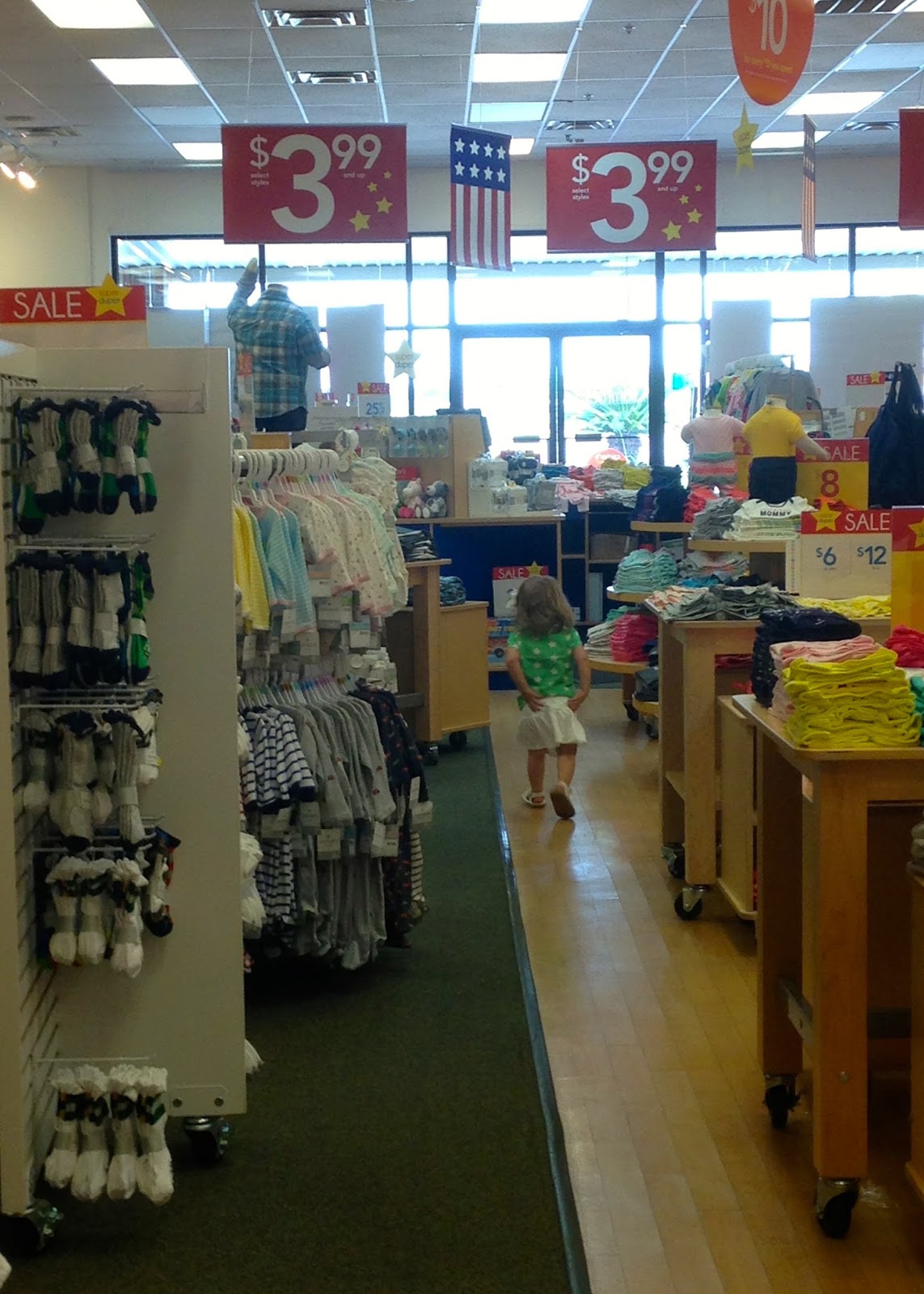 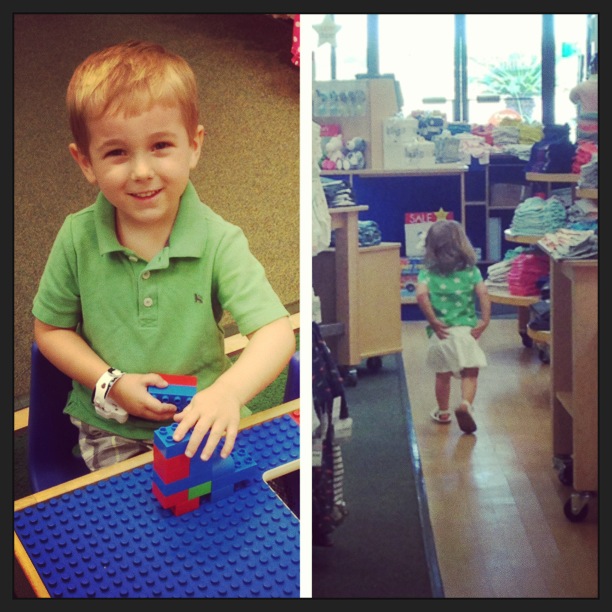 Having this little outing made me really appreciate my kids age differences. I can’t imagine having TWO kids around Britt’s age! Whew, that would wear me OUT haha. I always think about my friend Crissy who had four kids within four years. She does SO MUCH with her kids and I really applaud her for that. If I had that many kids so close in age I’d probably always just stay home. The effort alone in getting myself and four little ones ready to walk out the door would be exhausting, then having to deal with behavior when out in public??? I can’t imagine it! I look forward to the day when we have more children but hope they are spaced out enough where I only have one “wild one” to manage at a time haha 😉

Not all outings go this smoothly. I have had moments with Britt where she will “pitch a fit.” She’s at that stage and it’s funny to me how different it is when she does public outbursts vs to how it was when Kye had them. With Kye I was MORTIFIED. But with Britt? Phhh. Doesn’t phase me a BIT. She can cry and carryon and a million people will be staring but I just keep doing my thing haha. I have left stores due to fits but I’ve also simply ignored her and finished checking out before leaving. If I go through the hassle to run an errand then I’m def not leaving the store before I get what I came for! I will take her to the bathroom for a spanking if needed (I only spank when there is direct disobedience and often in public type settings the behavior issue is more just an outburst from her emotions of not being allowed to touch something, freedom to be out of the stroller, etc and not so much disobedience. In those cases I ignore her behavior, without caving in, then leave the place pronto. Often even just showing her the spank stick will calm her down quick!). Overall though, I think it’s beneficial to take the kids along from time to time on errands. Even if the behavior isn’t flawless, I know it’s a learning opportunity on how to behave well next time 🙂

They did so great in the store that we had a little fun in the firetruck out front! No, I didn’t pay for them to ride it…but they still had a good time before we headed home! 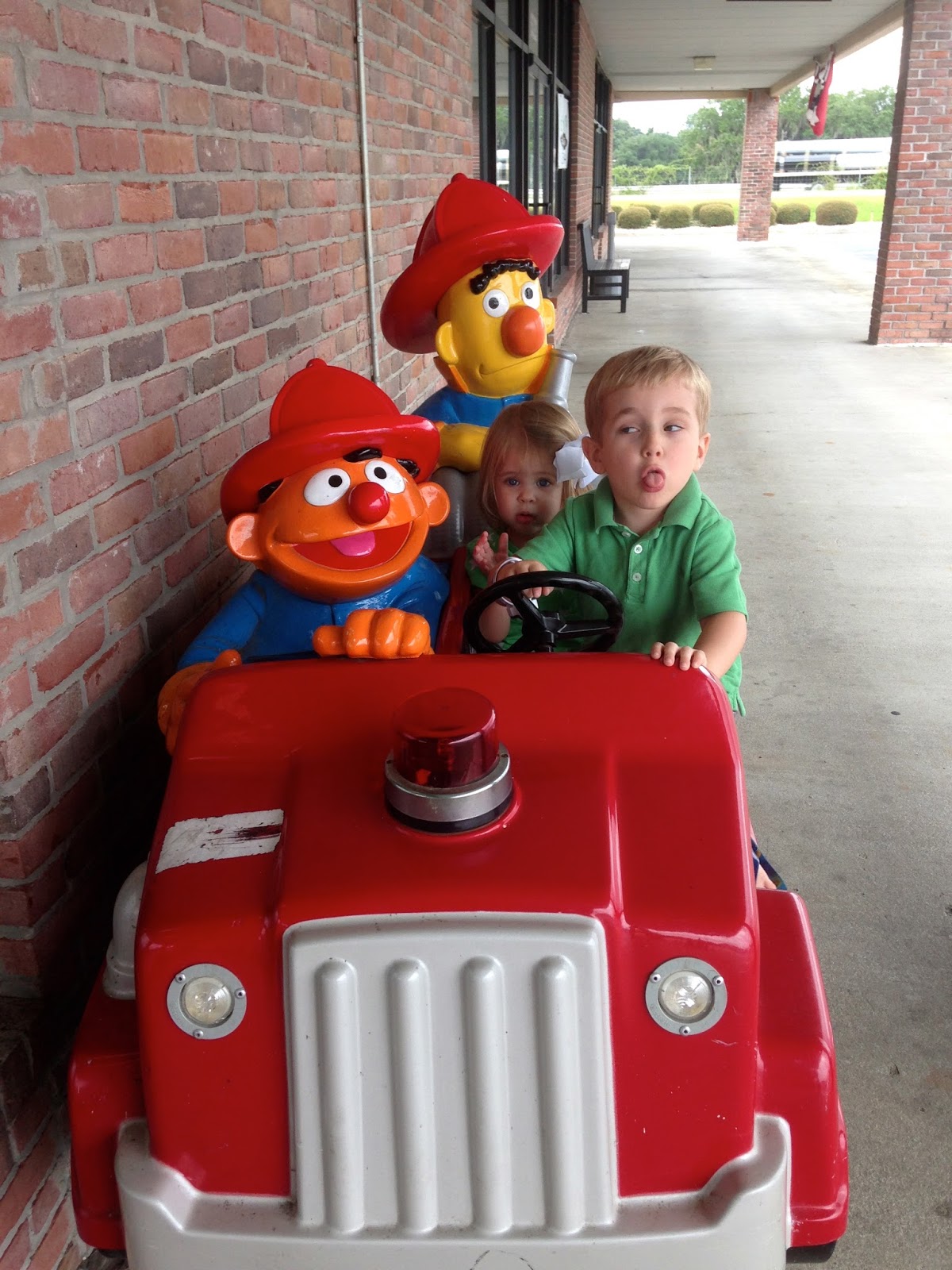 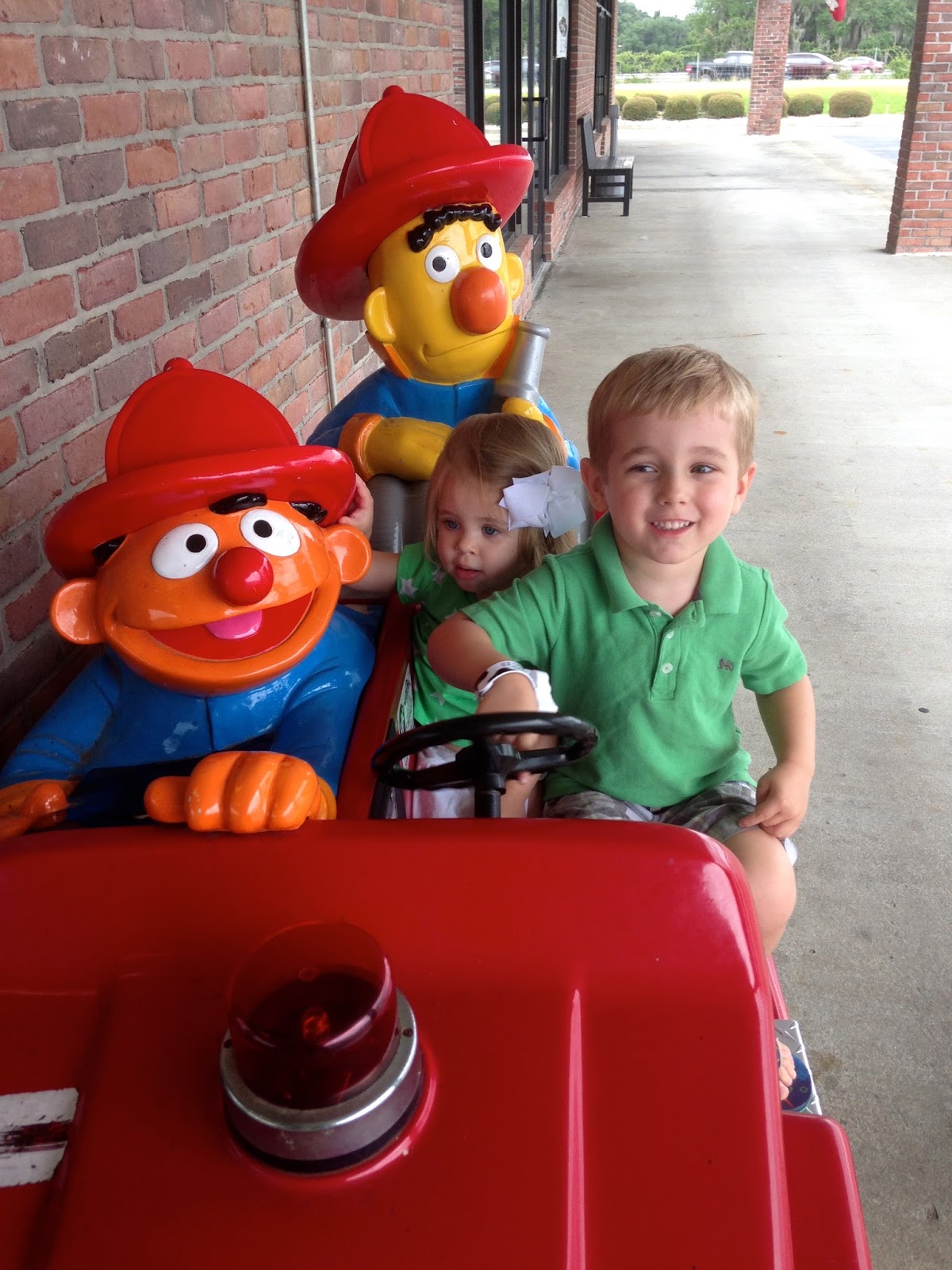 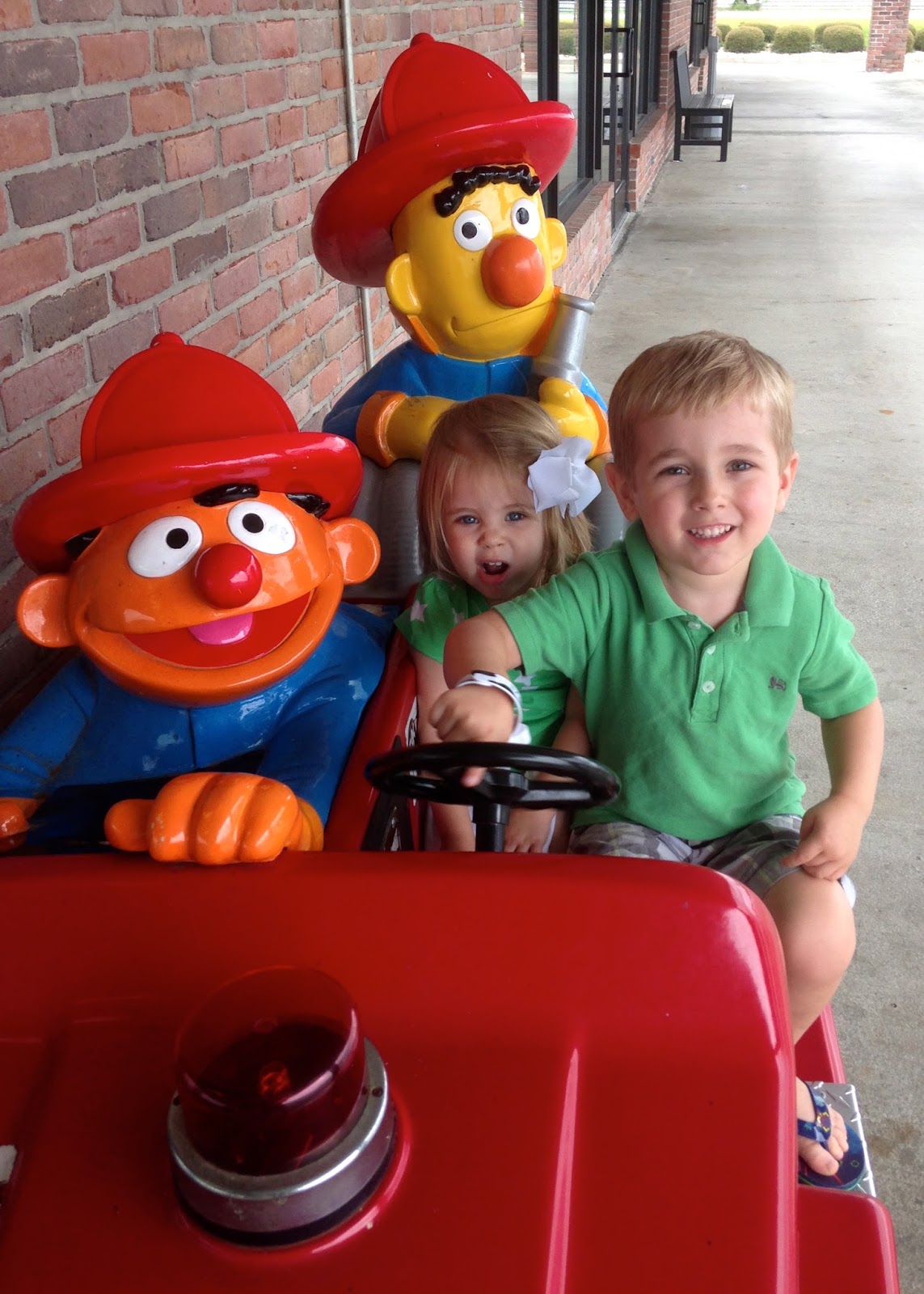 What are your thoughts on taking kids along for errands? Worth the hassle or not?